We were excited to visit the ‘waterfall country’ of Brecon Beacons as we’d never been there before. The first area we explored was the Four Waterfalls Hike which we needed to access via some country lanes. We passed one carpark but I knew there was another one closer to the hike so we headed for that, passing a sign saying ‘not suitable for campervans’. Strange we thought…I guess it could be referring to big motorhomes, Helga’s actually quite a small van. So we headed down and regretted it straight away. It was extremely narrow and headed steeply downhill with almost no passing places.

It was only a short manic drive though so we pulled up in the carpark and started making breakfast. A staff member turned up at the carpark so I thought I’d ask what the other road out was like. “Oh that ones even narrower…it just gets narrower and narrower”. And you know when a local says it’s narrow it’s going to be awful. He recommended we headed back to the other carpark now while it was quiet so that’s exactly what we did, temporarily packing up our breakfast and driving off…only to discover we weren’t allowed to turn left up the road we’d just come down, instead we had to take the much narrower and longer route out. Oh dear lord…I’ve walked on wider footpaths! It was the width of one car with high hedges and passing places as rare as a bear sighting in Wales. Then the inevitable happened and we met a car, I’m so grateful it happened in literally the only passing place, and it was a crazy tight squeeze with the mans mirror and wheel jammed into the hedge! It was like driving through a maze with a blindfold on and cars on the loose. We eventually made it to the original carpark and continued our breakfast. What a bloody palaver.

The hike led us alongside the river and down to the first waterfall. We were at a bit of an awkward angle to see it so it wasn’t the most impressive and we continued on our way. The path split and we opted for the right route, it kept us on the right side of the river and my map suggested there was a bridge or crossing place further along. The trail didn’t look very trodden though, it was extremely steep and dusty and one section involved holding onto tree roots to leaver ourselves down. Finally we were back along the shores of the river and decided to start the day with a swim so we found a nice section a couple meters deep for a plunge. We soon noticed lots of people were walking on the cliffs high above us on the opposite side, a few people saw us and tried to venture down the hill to get to our swimming hole but they couldn’t cross the river to us, so that was a bloody relief. 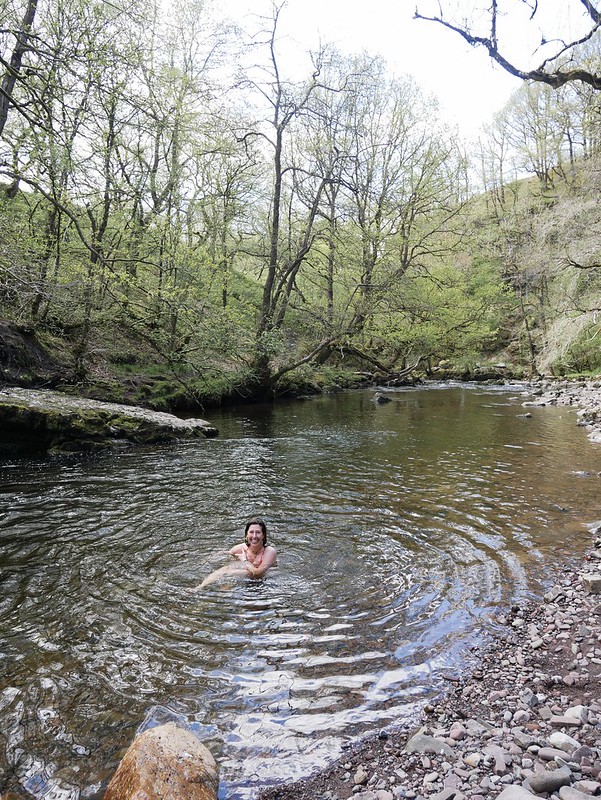 After our little dip we continued walking along the river looking for the point where our path was supposed to cross the river…but there weren’t any bridges and the water was too deep to cross. There was a faint path continuing on our side so we had to decide whether to take that, the unknown route, or hike all the way back to the main path. Our decision was made very easy when we peered over the top of the next waterfall and saw dozens of people photographing the falls – our side of the river was so tranquil in comparison so we thought to heck with joining them and we sat down on some rocks and enjoyed a picnic. 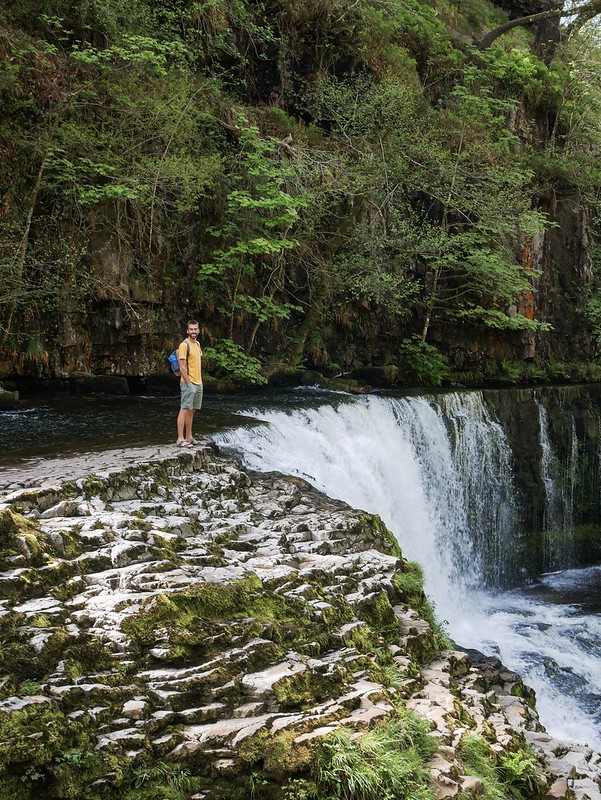 After our peanut butter and jam sandwiches we ventured down the track, albeit the route wasn’t on my map we clearly weren’t the first to walk it as there was an obvious path to follow. We had the best view of the waterfall and while everyone else was putting their tripods precariously close to the cliff edge and leaning right over for a better view, we had the waterfall right in front of us. It was a really beautiful waterfall, absolutely gushing with a few different layers to it. Further down it opened up into some idyllic deep pools and we decided to go for another swim. 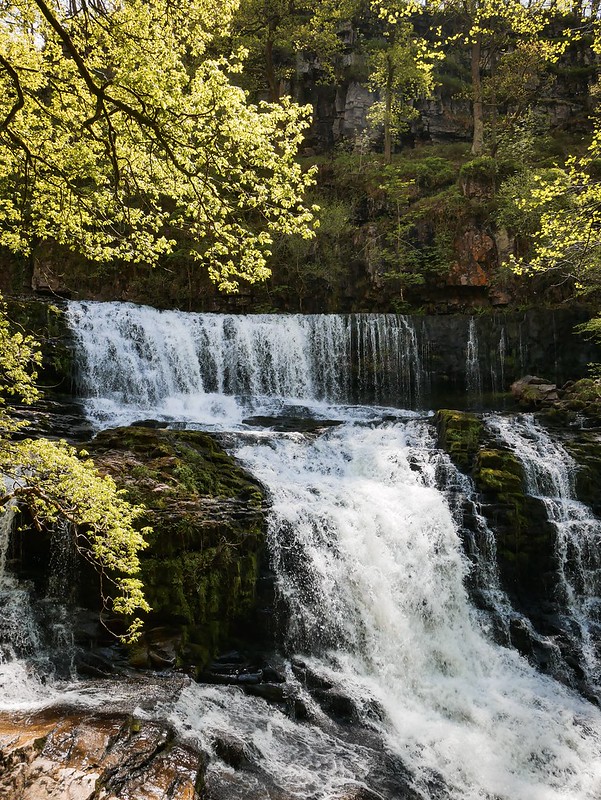 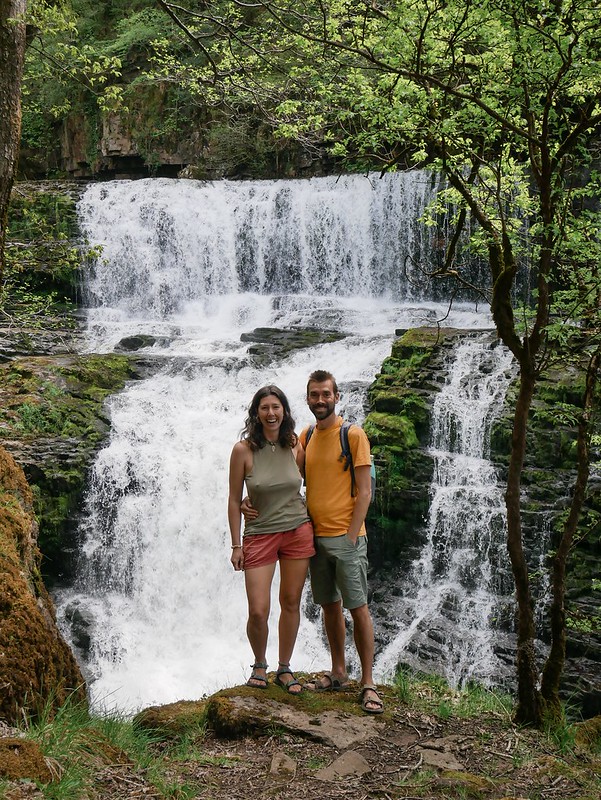 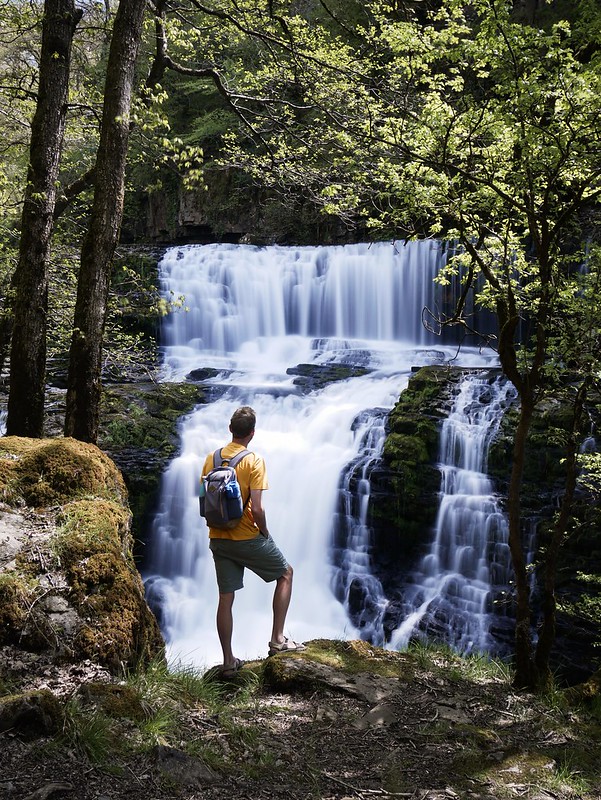 This seemed to be the point where everyone stopped for a picnic so one side of the river bank was full of people and we were feeling very smug, sat on a giant boulder on our own. After an hour of tranquility we spotted a couple of people braving a walk our way. I say ‘braving’ but it was an absolutely foolish route they were taking, walking beneath the top waterfall. Had they of slipped they’d of been flushed down from one waterfall to the next. As if the route wasn’t bad enough the man actually started crawling under the gushing water and sticking his head under it. We were so confused, thinking it must be an accident as he was fully clothed but his girlfriend was filming him. Wow. The things people do for Instagram ay! 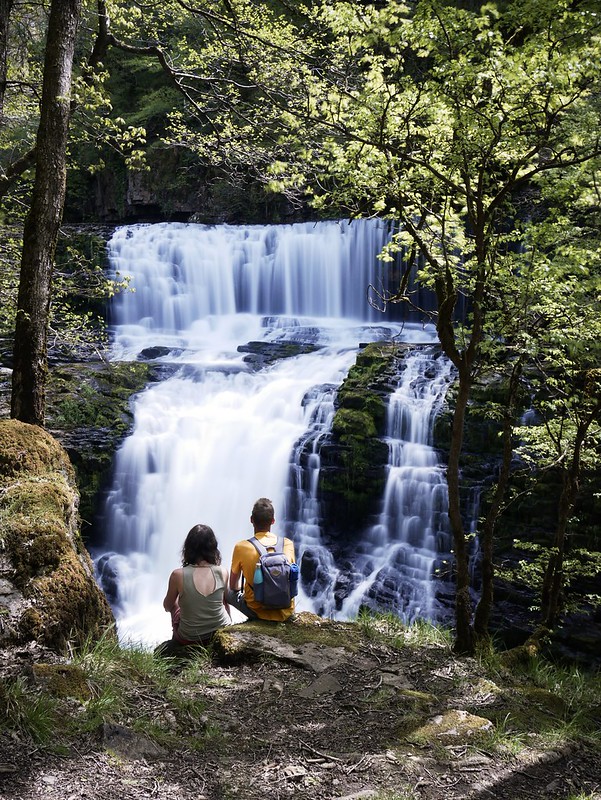 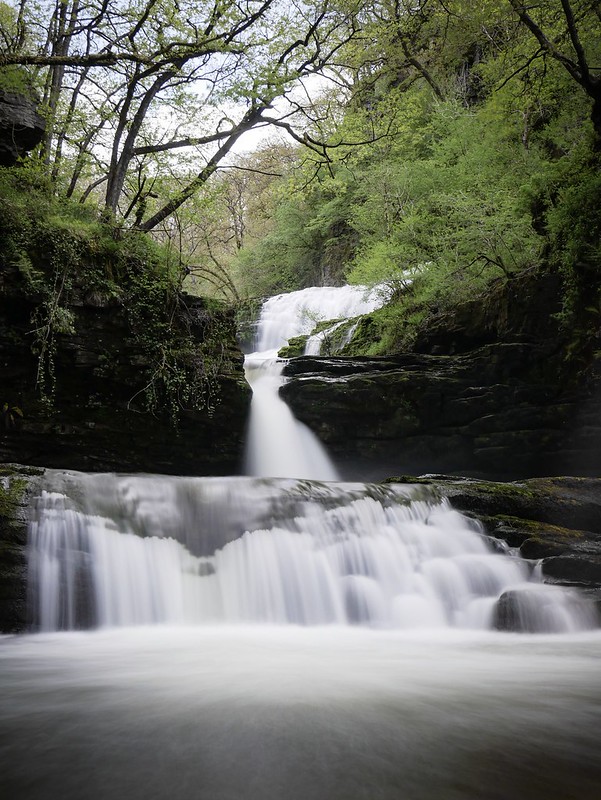 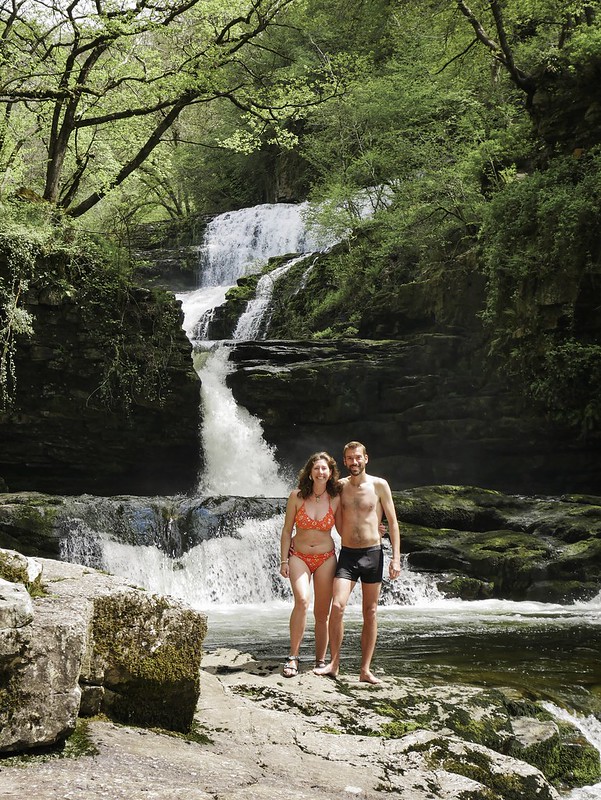 Eventually a big group of students crossed the river and joined us so it was a good time for us to continue the hike and finally cross over to the main trail. There were a couple more waterfalls to view but to be honest neither of them impressed us as much as the 2nd one so we called it a day and headed back to Helga. 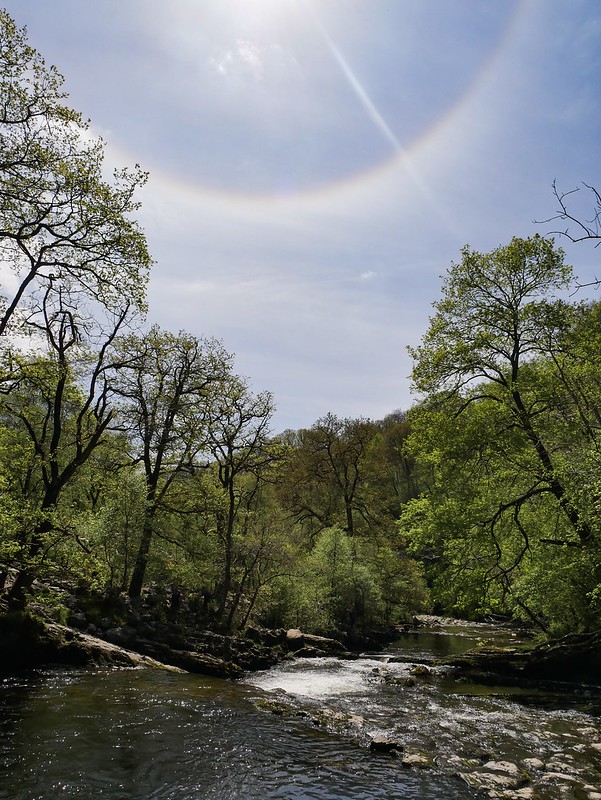 The next day we headed to some different waterfalls, the weather was completely different with drizzly rain but a walk through the woods to see some waterfalls seemed like a pretty good idea. Just as we were about to set off a jolly old chap walking a little dog stopped us for a chat. He was a local who’d lived in the village his whole life and remembers playing in the waterfalls when it was just a local secret – now everyone knows about them. He was very funny and had a lovely Welsh accent, joking that his name was Terry but the locals call him Terry the sheep because they think he prefers sheep to women which really made us laugh because we didn’t realise the Welsh did that joke on themselves, we thought it was a bit of banter between the other UK countries and Wales. He gave us thorough instructions on where the path was and the village toilets before we bid him farewell.

There were lots of idllic swimming holes along the river but we weren’t tempted for a dip in the chillier weather. To be honest we weren’t as impressed by these waterfalls as we were with yesterday’s, we were truly spoilt! They were nice but not wow, especially the Lady Falls which we’d been recommended but it was rather anti-climatic. The best waterfall was up a trail without a soul around, so quite that we finally plucked up the courage for a quick swim before making our way back down the trail. 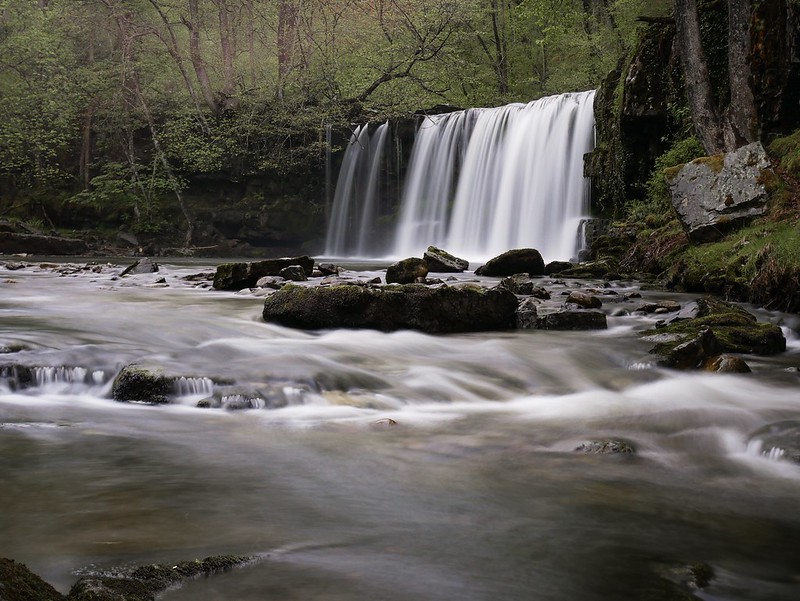 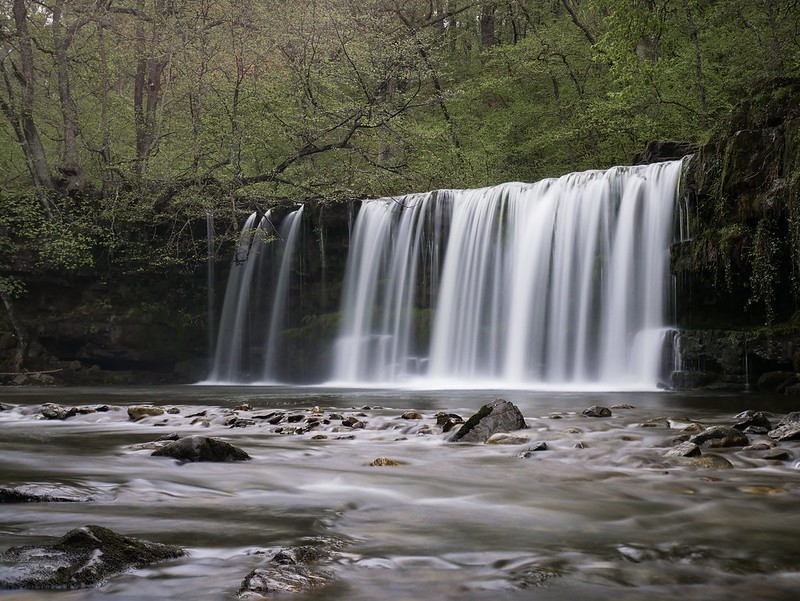