Either we started our hike up Pen Y Fan early or we took a very remote route as we didn’t see a soul for the first hour or two. Eventually we reached the uphill slogs where the path goes up and down peaks like a rollercoaster ride. The mountains weren’t typical rocky mountains that we’re used to from North America, they were more like steep hills. You could see how the landscape was formed from glaciers as the mountains had steep sides and long ridge lines that dropped into a sort of circular basin style valley. I 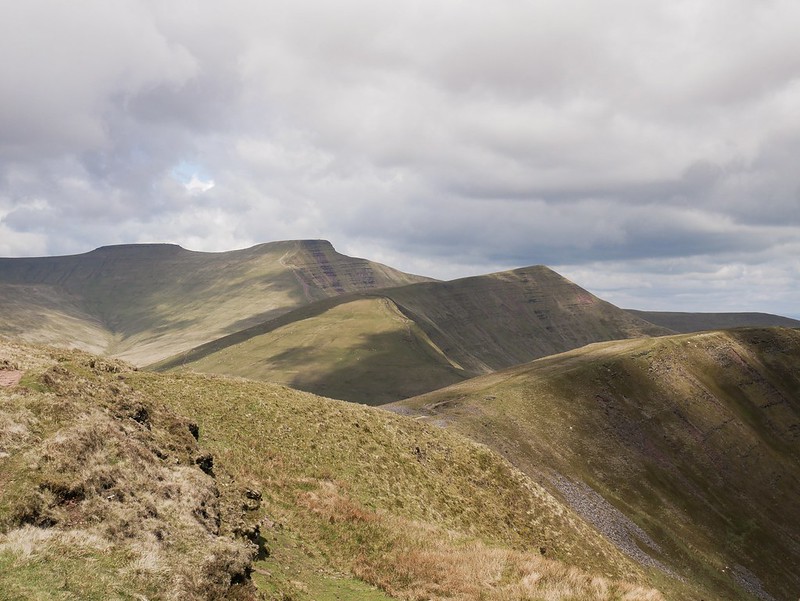 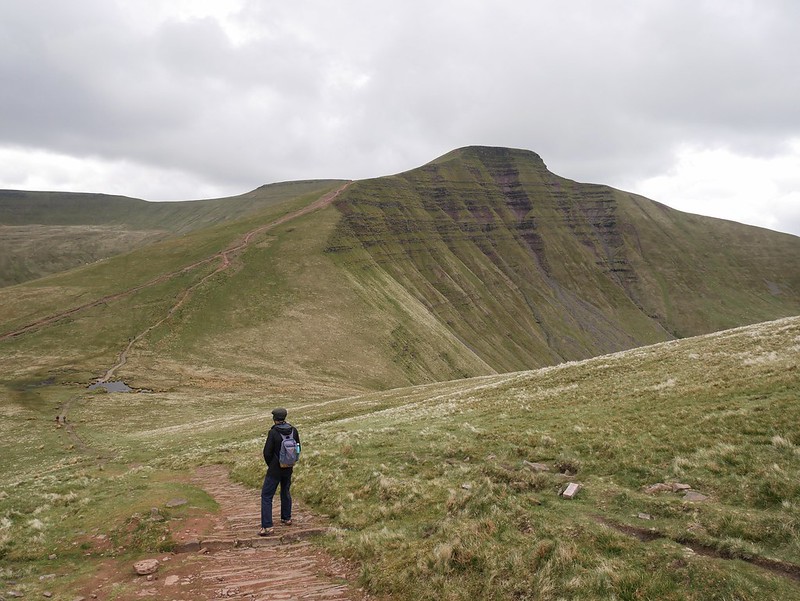 The hike became pretty busy as we climbed up the next two peaks to Pen Y Fan and we didn’t even feel the need to stop for a photo for many reasons: we’d been there before, it hardly felt like a mountain summit, there was a queue of people waiting for a photo and it was starting to rain. The rain was the big problem as it was such a low percentage predicted that I risked not bringing any waterproofs with me. I had my warm puffer jacket on but it’s not waterproof and a friend told me he got his wet once and it stank afterwards so I always have that thought in the back of my mind. 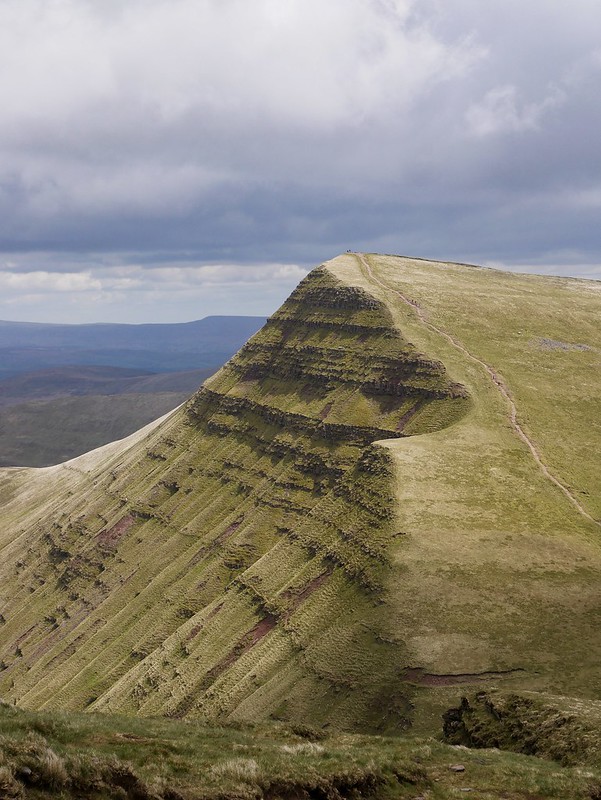 We’d been hiking for a few hours and hadn’t stopped once so we were absolutely ravenous but the rain was taunting us, coming and going in waves. In the end we just had to sit down and eat and then we followed the ridge all the way around until our descent into the valley. It was an awfully long walk, we were quite exhausted and the rain was continuing to tease us. We managed to get some cover in a beautiful section of woods with trees so tall and straight they looked like lines of giant soldiers. 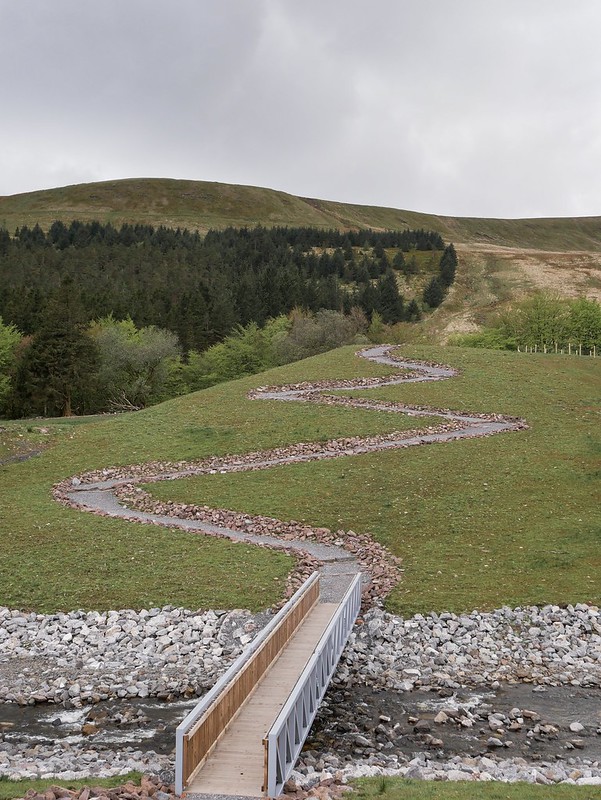 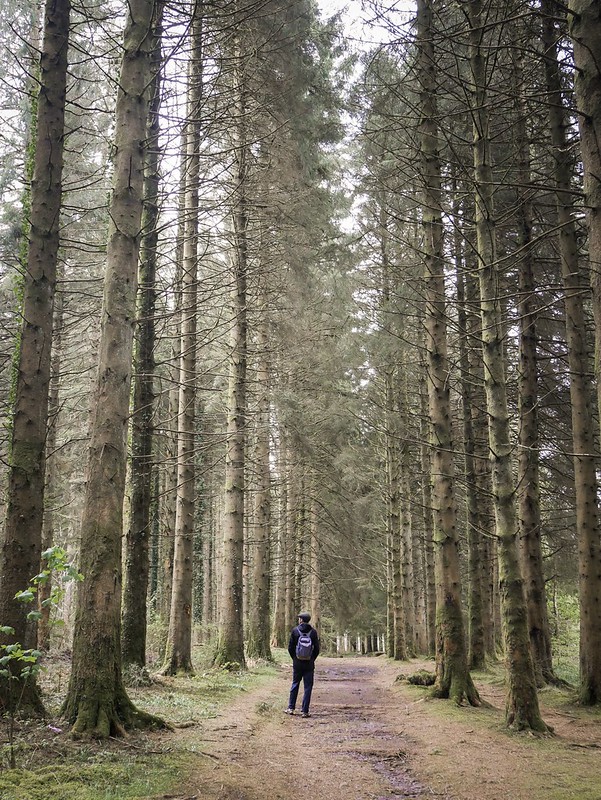 The final couple of kilometres were along the road and the rain began hammering it down. I had to resort to pulling my bag cover over my shoulders and head to try and keep as dry as possible. In the end we hiked 20km over 7 hours and boy did we feel it. We decided to just drive a little down the road to a different area to camp for the night. The only problem was there was a little lamb yelping for its mum who was on the wrong side of the fence. It was bloody irritating more than anything and we looked at each other and declared ‘well we can’t sleep with that racket!’ so Craig went out and opened the gate at which point the mum happily ran back in and were very happy to be reunited. Two hours later and the damn mum had escaped again and the lamb was yelping!! So Craig reluctantly did another rescue operation.

The following day we left that tranquil area and did a detour out of Brecon Beacons to The Valleys. Someone recommended an area to visit if we loved mountains so that’s where we went. We didn’t expect it to be such a steep and hilly route and we kinda regretted the decision straight away. We went up and over the first hill which descended into a new valley and the road lead through a town. The houses in the valleys all look the same with long rows of terraced houses, mostly slapped with pebble dash and with different coloured doors and window. The town we were driving through must be some sort of record holder for the longest row of houses in the world, and not only that but the road was going downhill the whole time. It got to the point that I turned to Craig and said ‘how is it possible that we’re still going downhill? We’re literally going to penetrate earths molten layers if we keep going downhill!’ The downhill wasn’t the problem, our worry was the further we went down, the steeper the next hill would be to get up, and our assumption was right. 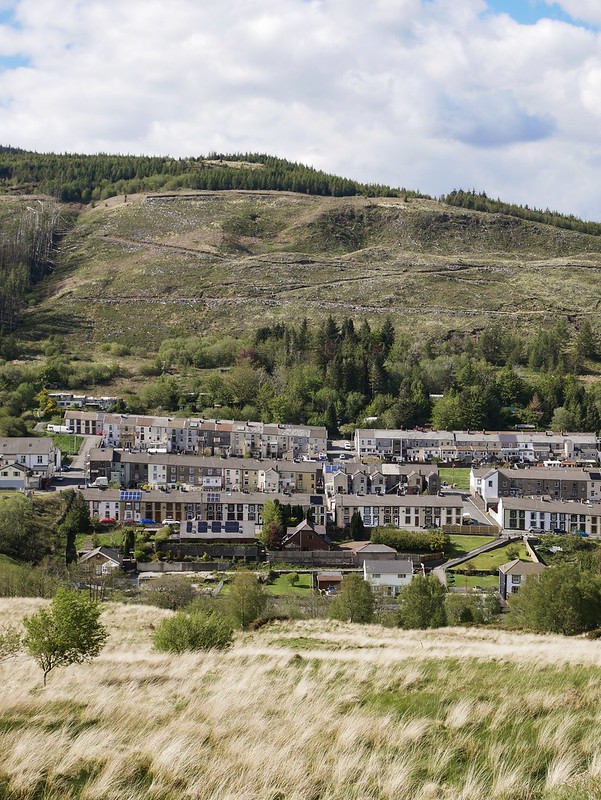 We hadn’t even reached the pass we were recommended to visit but we were ready to give up. With a 32 year old van we didn’t want to climb anymore hills so we decided to park at the bottom of the next valley and hike up to the pass instead. We could tell it was a beautiful area, sort of like the mountains of Pen Y Fan but with a village at the bottom and a scenic road winding through it. We found a shortcut trail up the hillside and we were shocked to see so much rubbish everywhere. Takeaway wrappers, nappies and even a car!! The car was actually crashed into a dry waterfall below the mountain and at first we wondered if we could be the first people on the scene of a crash. Thoughts of witnessing bloody or even dead bodies flashed through my head but thankfully Craig spotted some tape around the scene so I don’t know how long ago it happened. With how much rubbish there was in the area we actually wondered if the car was an accidental crash or if someone put a rock on the accelerator to get it off the cliff and scrap it. 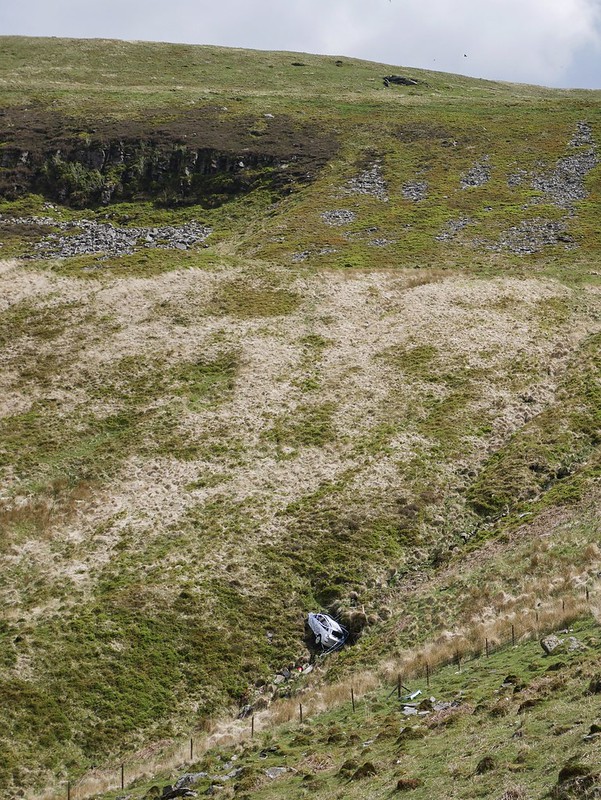 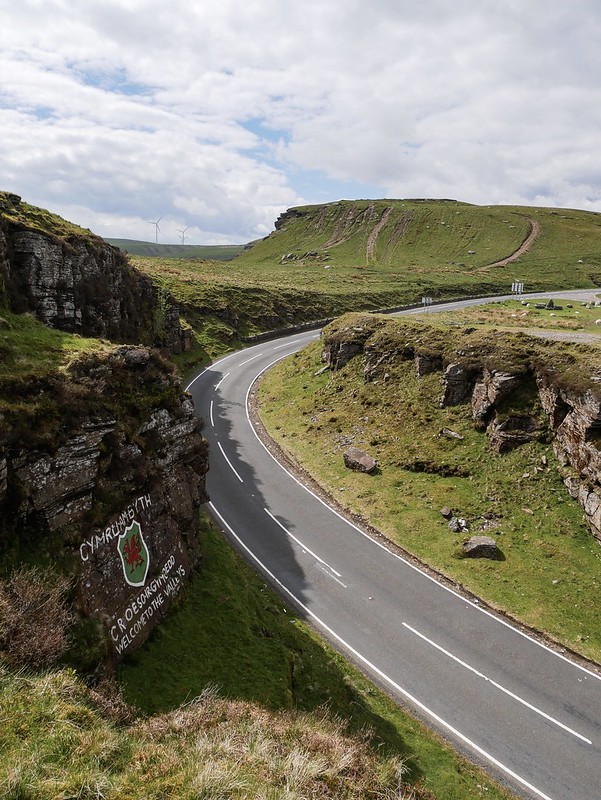 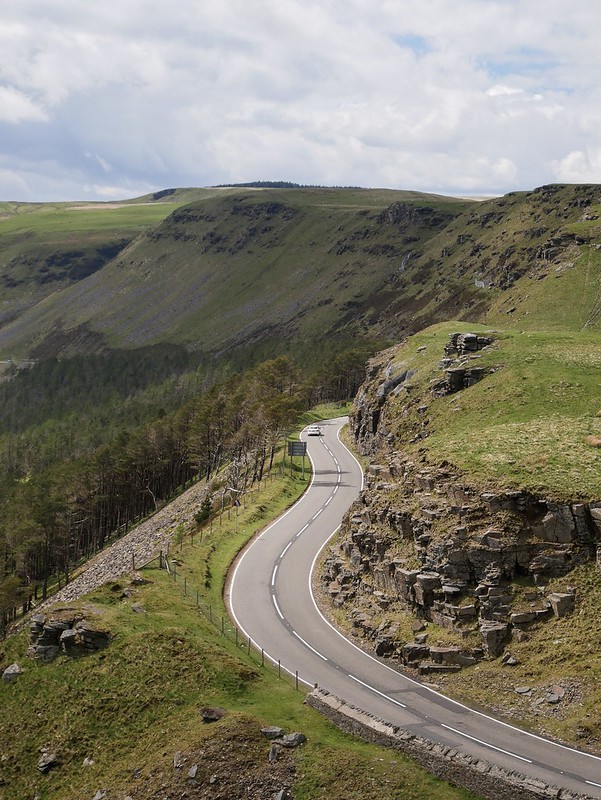 Anyway, we finally reached the area where the view started to get good as the road wiggled it’s way along the mountainside via hairpin bends. Known as the Bwlch, there was a rock beside the road which had a big welsh dragon painted on it and ‘welcome to the valleys’. We headed to a few different areas to get a nice vantage point and then we made our way back an absurdly steep route down to Helga who was looking rather smug about having the afternoon off. 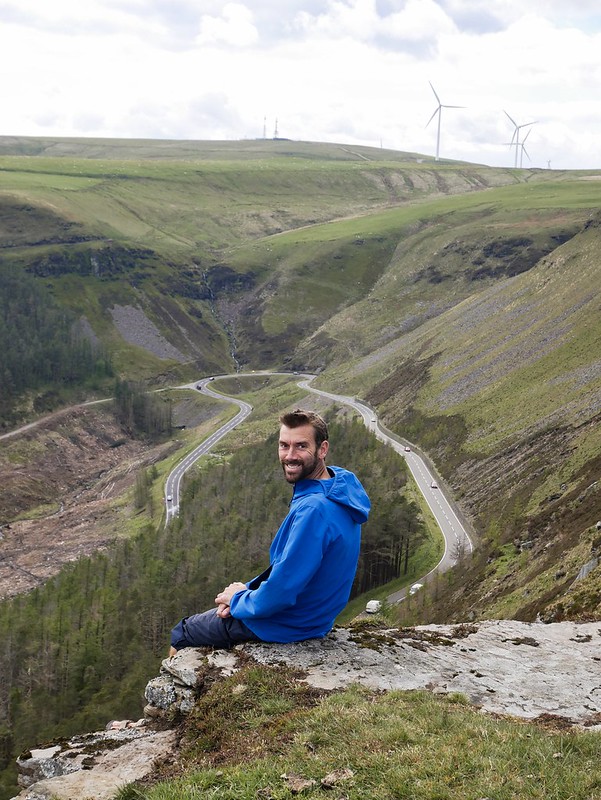 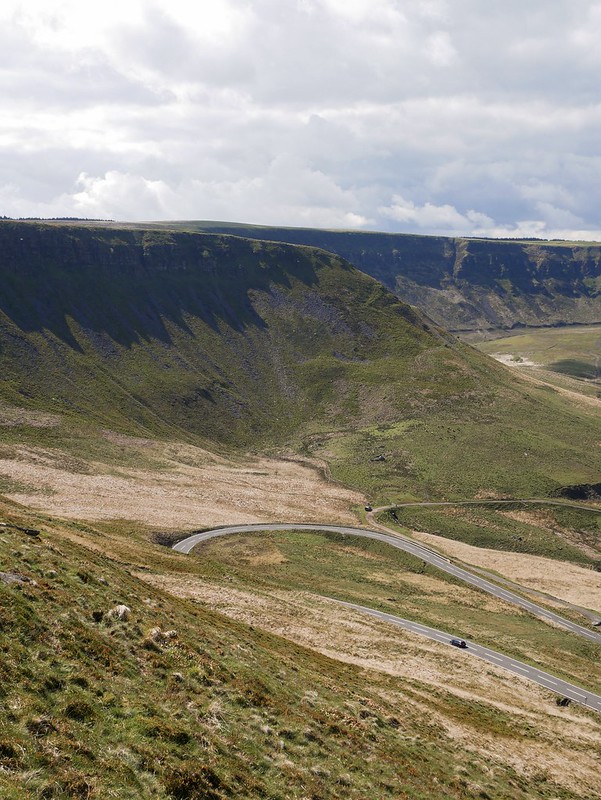