The weather was miserable and rainy so we decided to move on to the Talybont Reservoir area. We found a narrow lane to drive down where we hoped to camp that evening. It was only wide enough for one car and there weren’t any passing places for the 800m distance. I know it’s not too far but I wouldn’t want to reverse to let a car pass. The end of the road was a turnaround zone with space for about 4 cars to park. There was already a van parked up who had camped the night before and we were shocked to see they had a huge marquee set up. Wild or free camping isn’t exactly allowed in this area so discretion is key. Leaving a marquee out overnight and parking in a way which limits other cars from turning and parking isn’t acceptable. We asked the three lads if they were planning on staying again or leaving and it turned out they were heading off so at least we could camp there tonight. They drove off and left behind their disposable foil bbq…eugh! Drives me mad. So I folded it up into a small square and put it in my bin because I didn’t want locals to see it and complain that campers leave rubbish.

Anyway, we decided to try and do a walk before the heavy rain came but sadly it caught up with us as soon as we reached the summit of a hill. It would of given us an incredible view of the reservoir and the surrounding area but it was covered in a rainy haze and we soon became drenched – something that’s happening far too often these days.

We spent the rest of the day relaxing in Helga, until I got the urge to go to the toilet and had to go deep into the woods in the pouring rain and dig a hole. I kid you not it was some of the heaviest rain I’ve ever experienced and there I was with my pants down with rain rolling down my thighs. Then I saw a mouse run ahead of me into the shrubbery and a minute later I felt something on my foot. I flinched, thinking it was the mouse but it was a goddam frog, a massive one sitting on my foot (I was in sandals so he was literally on my toes!) I quickly filled the hole in and ran for my life back to the van. Seeing as I was already soaked I managed to persuade Craig to run into the lake with me for a little impromptu swim which was lovely and refreshing.

After a delightfully quiet evening we woke to more rain, but it wasn’t half as bad as yesterday so we headed down a narrow road which offered beautiful views. We did a morning walk to a series of gushing waterfalls and then we drove up to a sort of pass which had an incredible view of green hills all around us. It felt so wild and untouched that we decided to call it a day very early on and camp there as we were due for more afternoon rain. We watched as big black clouds swooped through the sky before heavy rain drops started tapping our metal home. 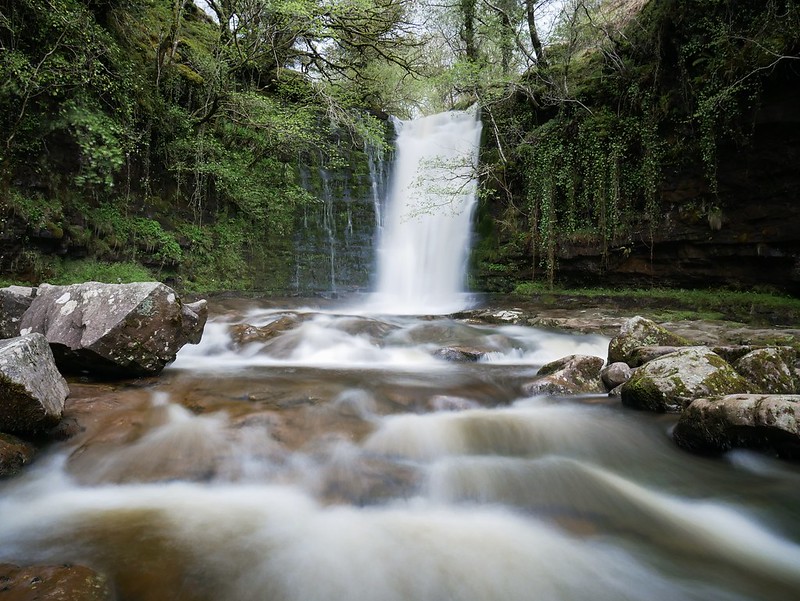 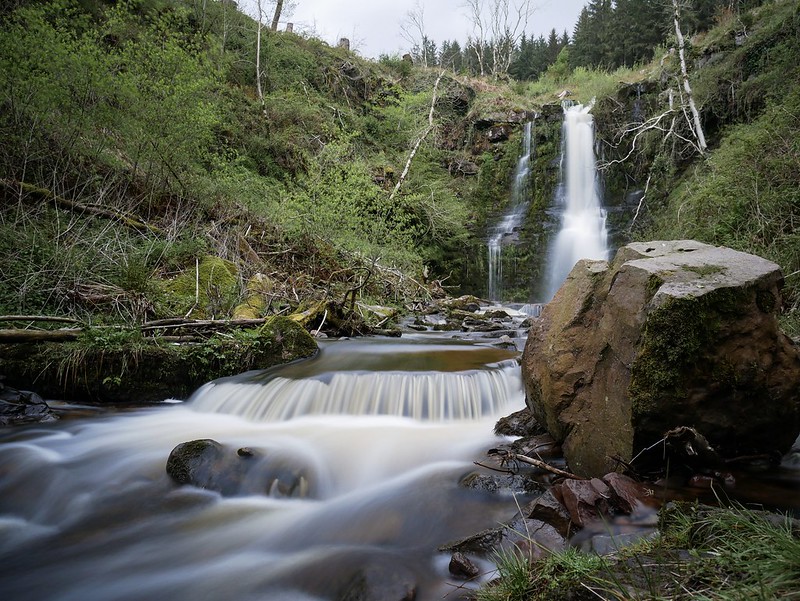 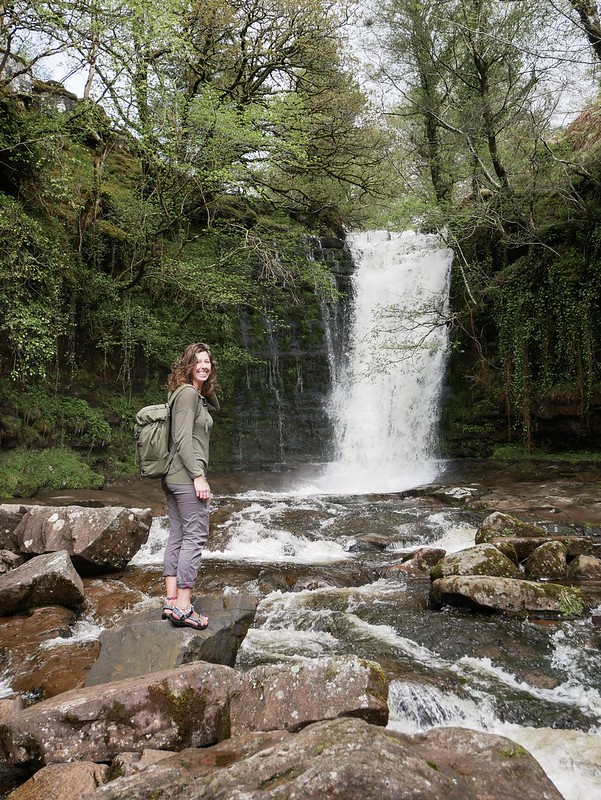 There were lots of sheep and wild horses roaming the land, one horse seemed to find it very amusing to head over to the others, sniff them and then absolutely freak out and throw its legs in the air. The weather all cleared up in the late evening so we hiked up the hill opposite us which was a steep slog. Sadly it led us to a giant boggy plateau that seemed to go on forever and not offer any sunset views so we headed back down to Helga to get an early night as tomorrow we have plans to hike Pen Y Fan, southern Wales highest mountain. 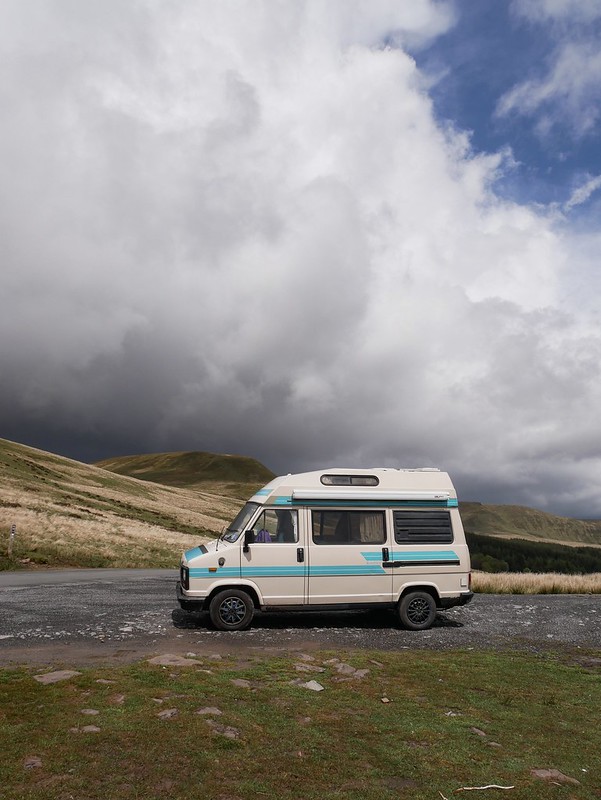 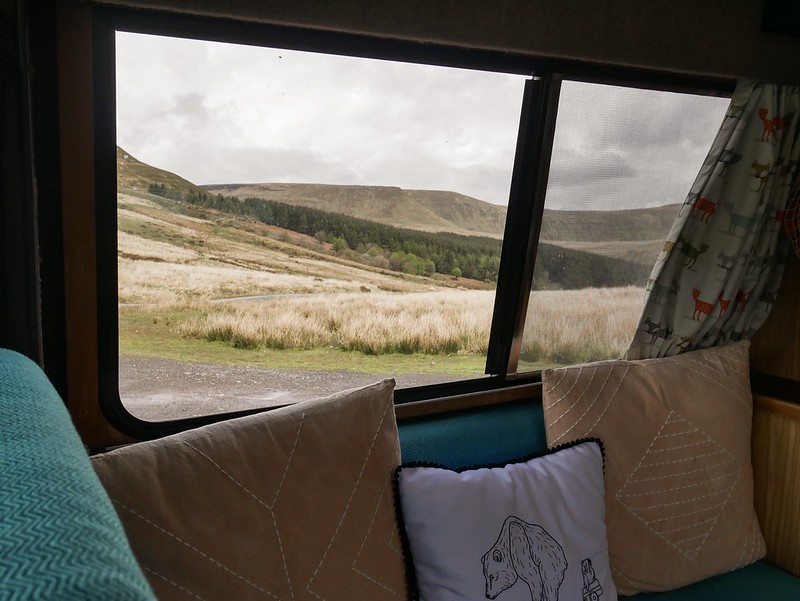 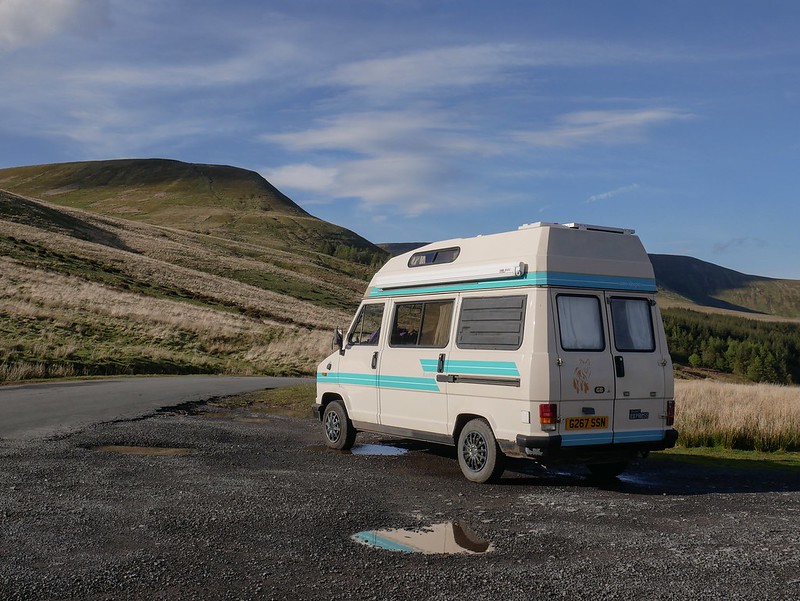 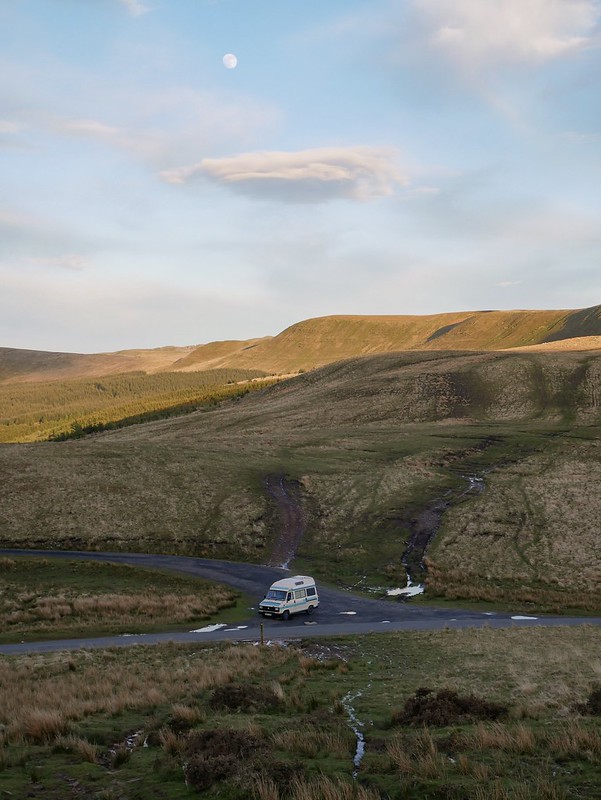