Our first stop in Dartmoor National Park was a hike to Black Tor and the Meldon Reservoir. The weather was very iffy and it didn’t take long for the rain to catch up with us. We hid under some trees but the rain was so heavy we were hardly getting any protection. We decided that the best thing to do in this weather was go for a swim. It sounded like a great idea, we stripped naked and jumped in, laughing at the novelty of swimming under the heavy rains drops. The laughter soon stopped when we realised we couldn’t actually dry ourselves. The rain was so heavy my little flannel couldn’t keep up and we realised we’d have no choice but to just put our clothes on while we were still soaking wet. What a bloody disaster.

The rain did eventually stop and we followed a trail alongside a gushing river with wild rapids. It’s been raining a lot lately which meant the ground was absolutely sodden like a soaked sponge. After trying to jump along rocks we gave up and just immersed our feet into the grassy puddles. A faint path led us uphill to the top of Black Tor where there was a cluster of bizarre rock formations and a big ominous looking black cloud creeping up behind us. Within minutes it was upon us and we took cover under a slanted rock. This time it wasn’t just rain, it was hail stones and our ‘protective’ rock turned out to have a gap in the top so we were drenched. Looking back at the imagine of us on the mountain now I can see why we were the only people stupid enough to hike on that particular day! 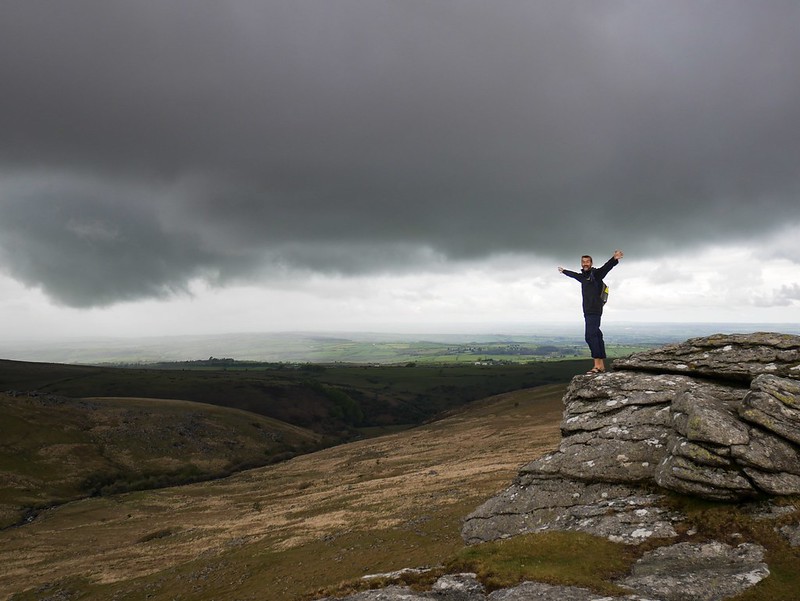 The route back was miserable with driving rain coming straight towards us. We looked like drowned rats when we got back to Helga. We ended up finding a lovely spot to free camp outside the park, in an area with wild horses and grazing sheep. The sun even came out to help dry all our clothes. It was only as the sun was setting that I walked across the road to another parking area and saw large no camping signs. Somehow we were still in the national park and didn’t want to risk sleeping there and potentially being moved on. So we spent some time carefully observing maps, seeing where the exact border of the park was and luckily all it took was a 200m drive up the road for us to be officially out of the park.

The following day wasn’t much better weather so we just did a stroll around Burrator Reservoir and then drove through the park a bit. A short trail took us to the top of rock strewn Sharpitor and then the much narrower ridge of Leather Tor. There were wild horses everywhere and they were such a delight to watch, especially the dangly newborns. One horse had a particularly cool mane that made it look like an 80’s rock star, and I think he knew it too. 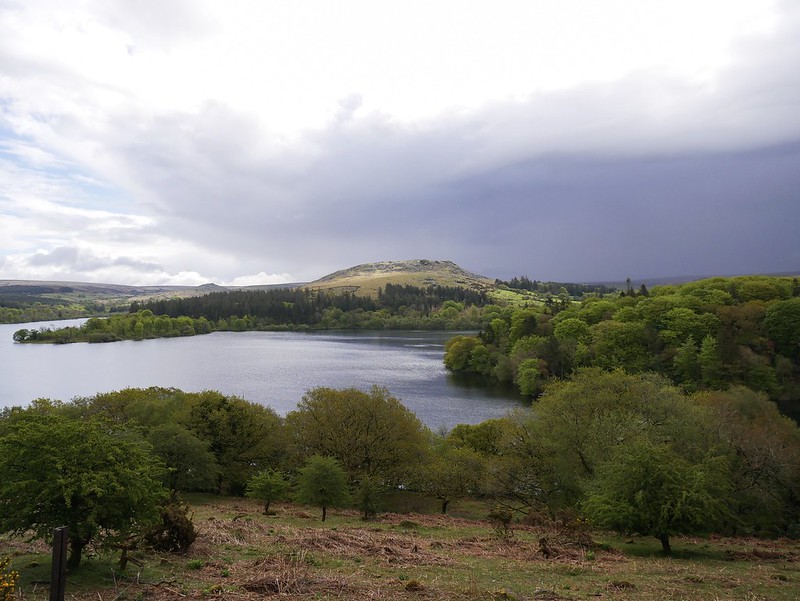 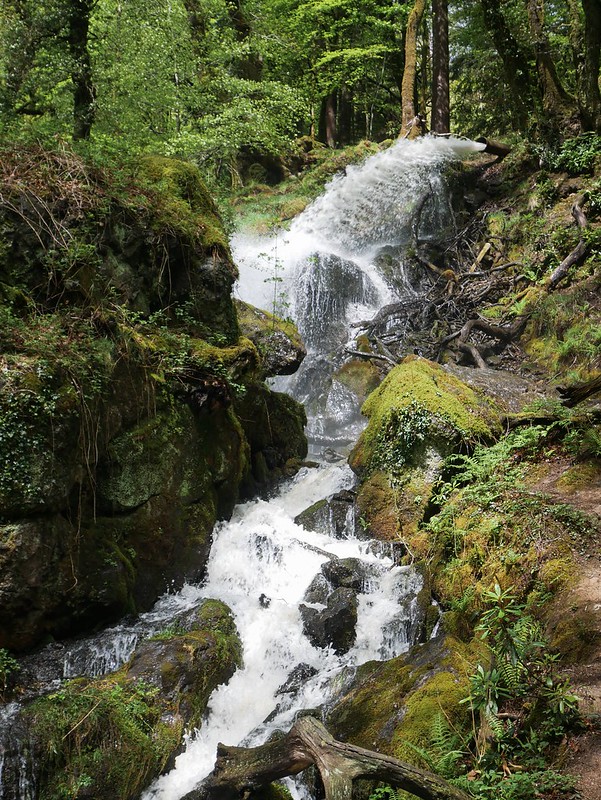 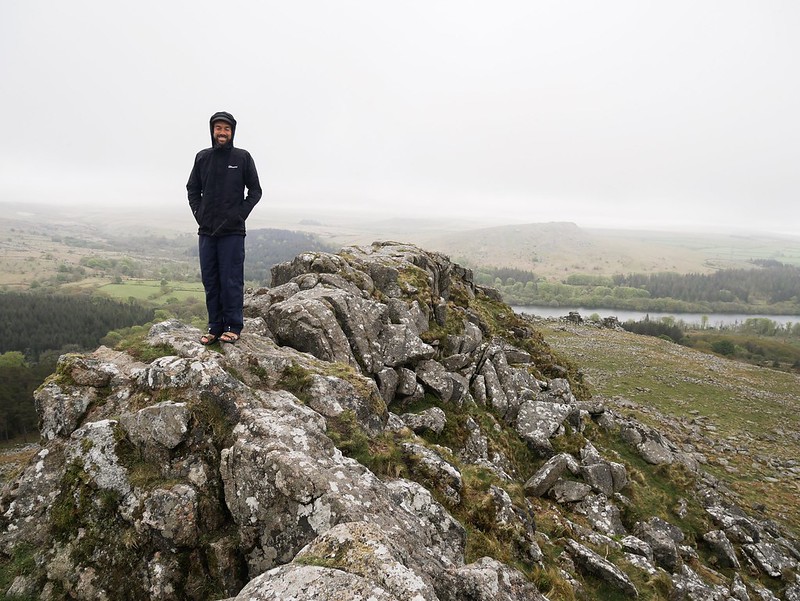 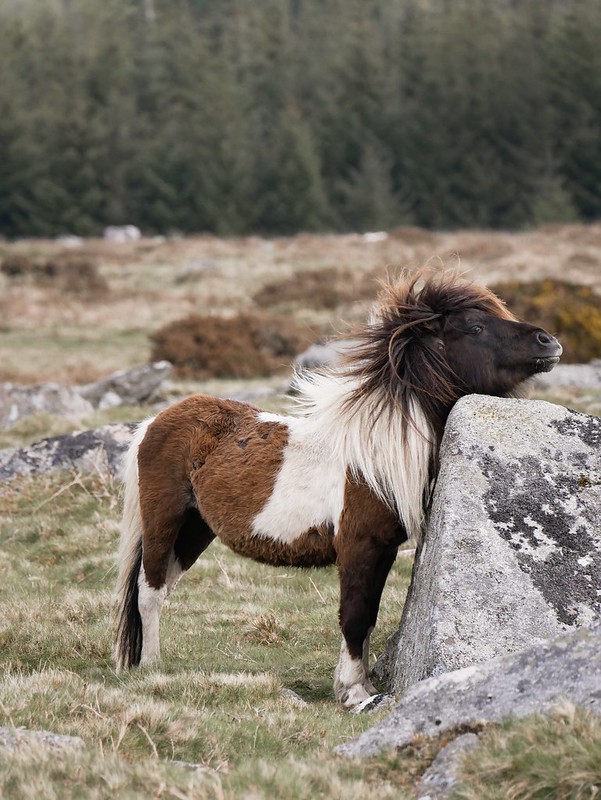 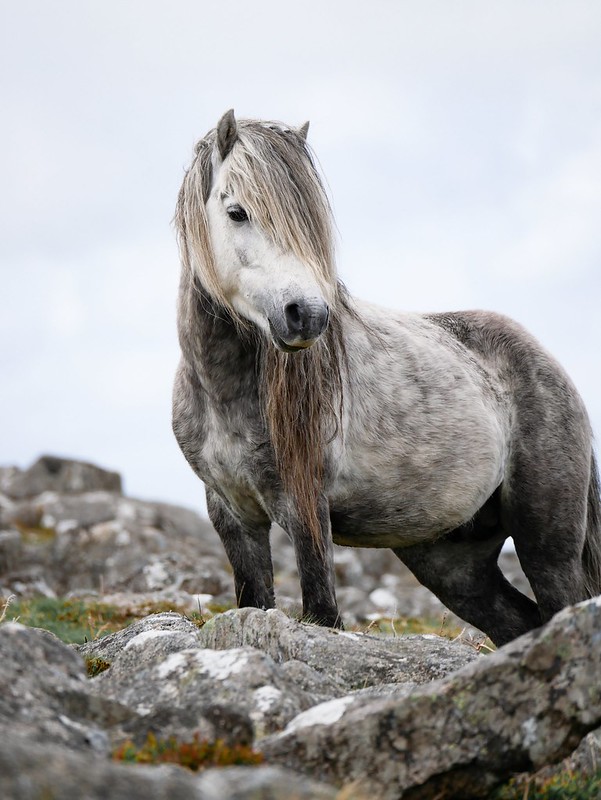 Luckily on our final day in the park we were treated to sunshine and had to make the most of it. Before we set off we stopped at the toilets (which were closed, cheers Dartmoor) and as we drove off Craig started muttering something in disbelief. An elderly women had just crashed her car right in front of us. Instead of reversing she floored it out her parking space, over a curb, across the road and over another curb until she came to a halt on the grass verge. We quickly parked up, ironically in the position she’d just departed from and I put my mask on and hopped out to check she was ok. Suddenly her engine started up, her lights came on and she started reversing. Oh my god, I thought, she must be crazy, is she trying to drive off as if nothing happened? It seemed so reckless that I panicked about her next move and dashed back to Helga telling Craig to start the fucking engine and drive off because I genuinely thought she was going to reverse right back to the space she’d just left – in other words straight into our van! It was a panicky thirty seconds but she managed to reverse onto the road and she actually started driving off, with two flat tyres and a smashed side of her car! Another witness had to run after her and bash on her windows until she stopped. My goodness. What a start to the day. 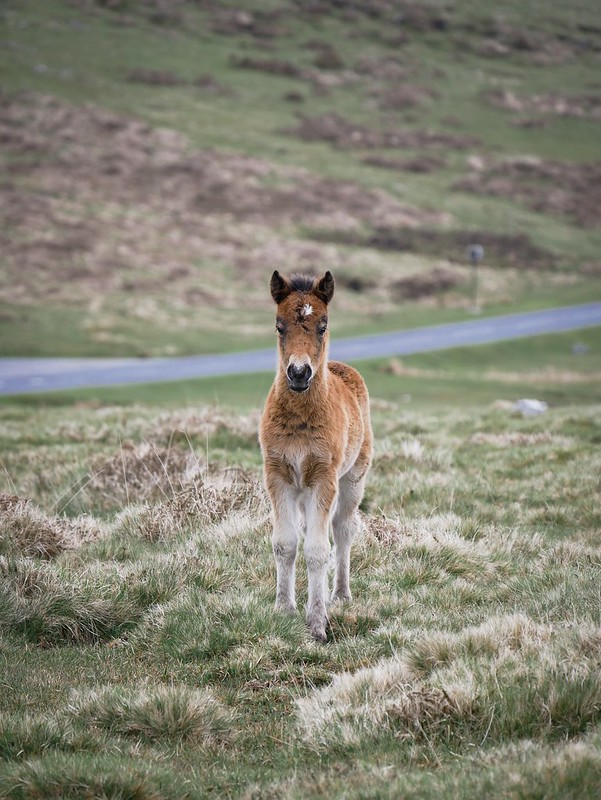 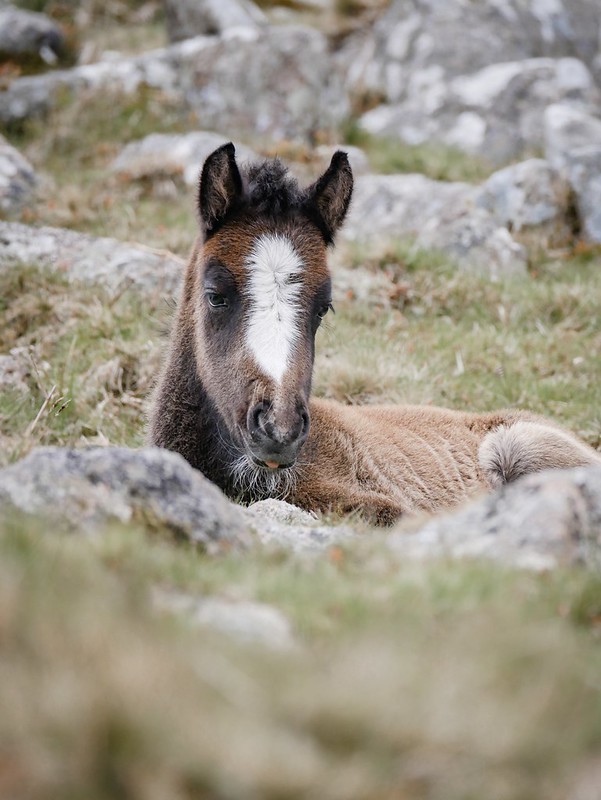 Once all that drama was over we set off on a hike up to Great Staple Tor which had some interesting rocks at the top but to be honest the Tor’s all become a bit same old after a while. Our next walk was to Wistman’s Wood, said to be a must do hike in Dartmoor. Everyone clearly knew that, which meant it was a pretty busy trail which led us to a forest of small twisted oak trees with a rocky floor where every surface was covered in green moss. I can imagine it looking even better on a misty winters day, it certainly had a creepy feel to it. 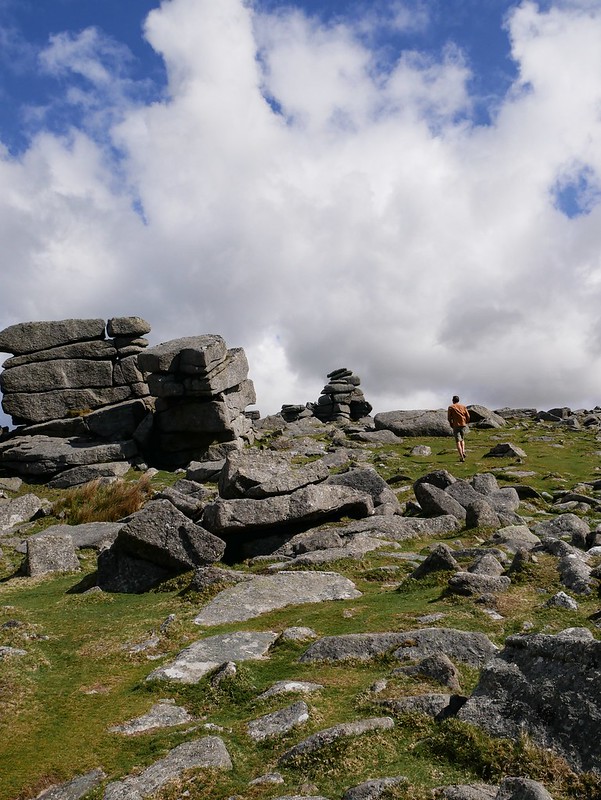 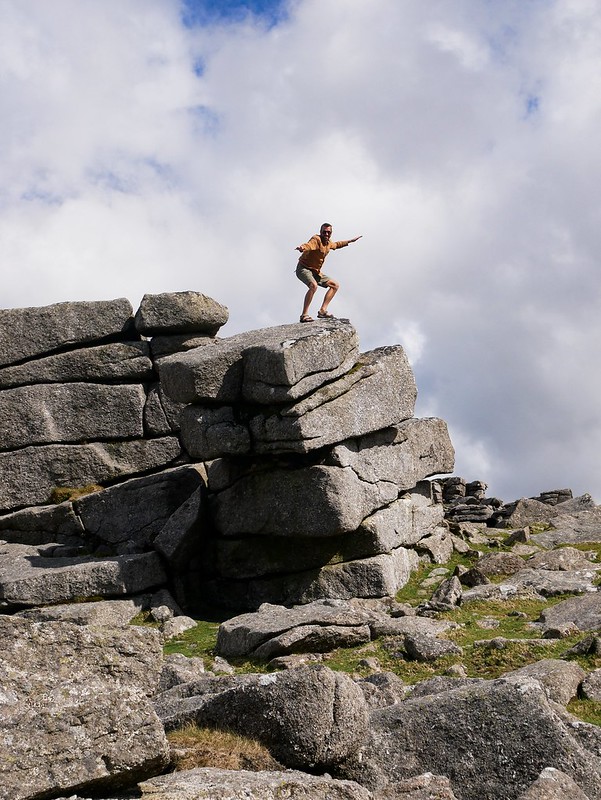 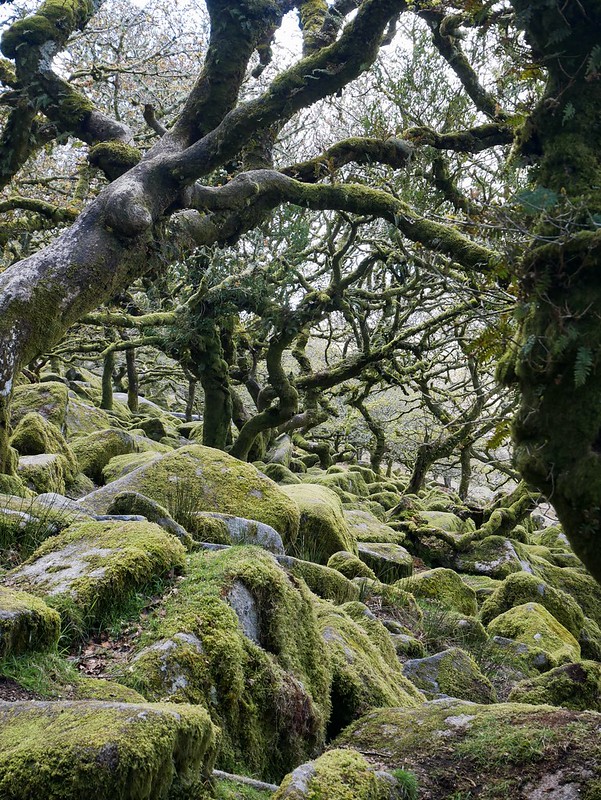 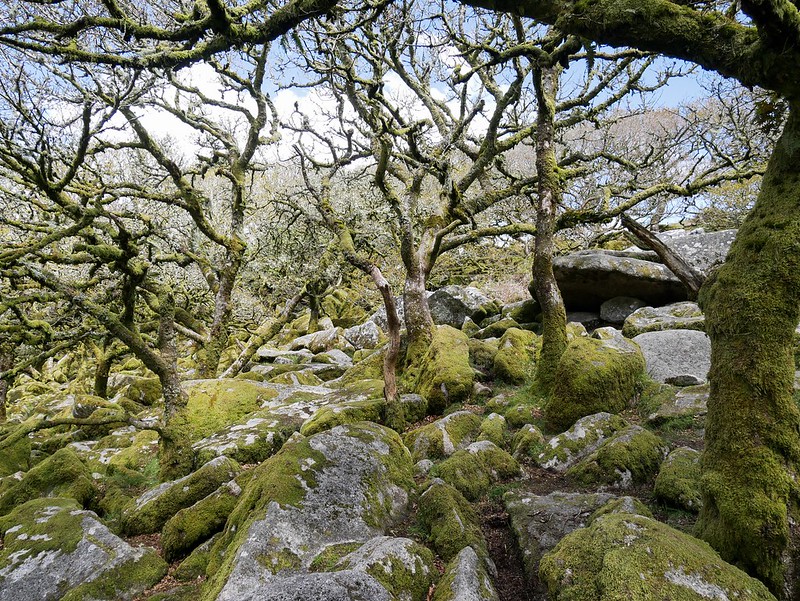 Our final hike started in Dartmeet and my plan was to walk along the River Dart and hopefully find an idyllic swimming spot. There was one in the area that I found on a wild swimming website but we like having places to ourselves so we went on a bit of an adventure. The trail was very un-trodden and so wet that we were basically wading through a puddle the whole way. One section was so saturated that all the grassy ground wobbled beneath our feet. It was the strangest sensation like standing on mother nature’s bouncy castle. One stream we crossed had boggy edges which my foot instantly sunk through. It was thick brown sludge, like a peat bog and every time I tried to lift my foot out it just had a suction effect and felt like quick sand. I didn’t want to rip my sandal so I had to sink my hand into the bog and help ease my foot out. 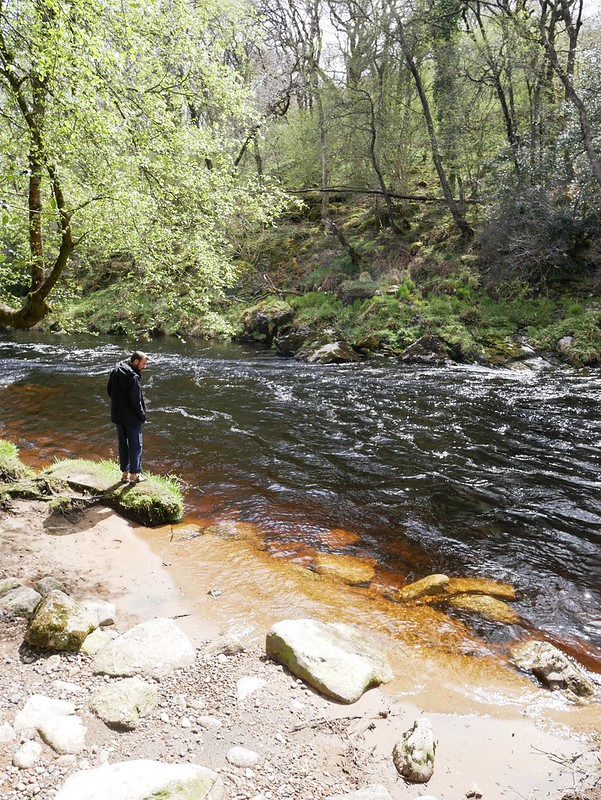 There was a deep spring fed pool right by the pathway that Craig wanted to swim in but I wasn’t keen. Even though we hadn’t seen a single person on the hike it wouldn’t take much for someone to come along so we kept hiking, much to Craig’s dismay. Luckily it paid off and we found a perfect little plunge pool right beside the raging river. Just behind our pool was a waterfall that was ideal to stand under. We hit the jackpot and had a delightful swim. It was hard to believe we were in England, finding a spot that was this remote or wild seemed too good to be true, and best of all we had the place to ourselves. 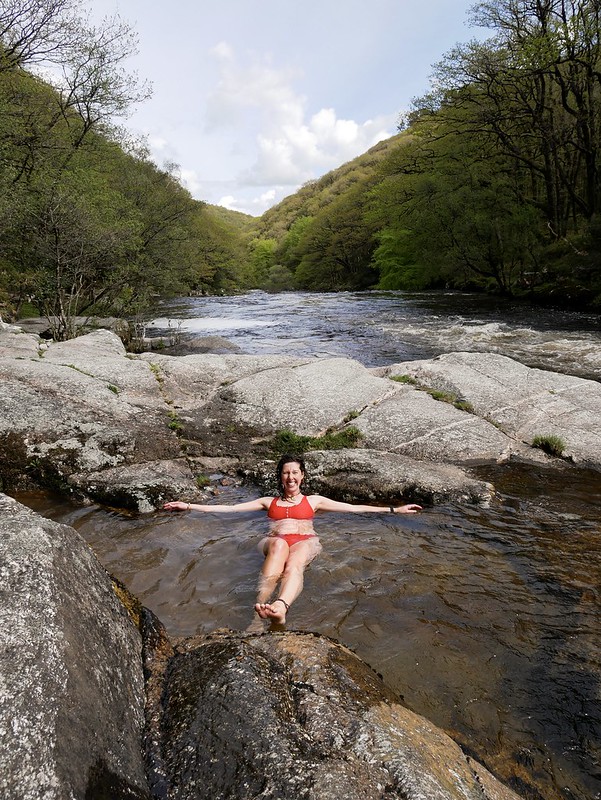 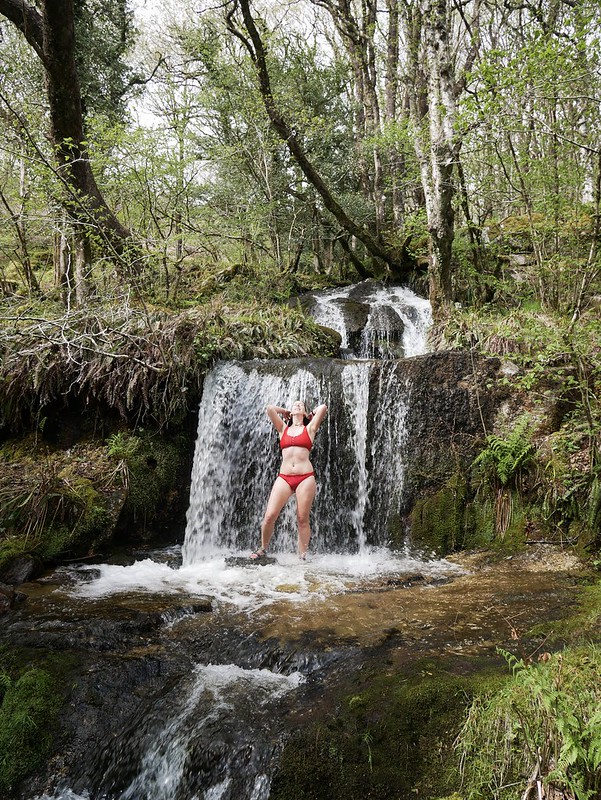 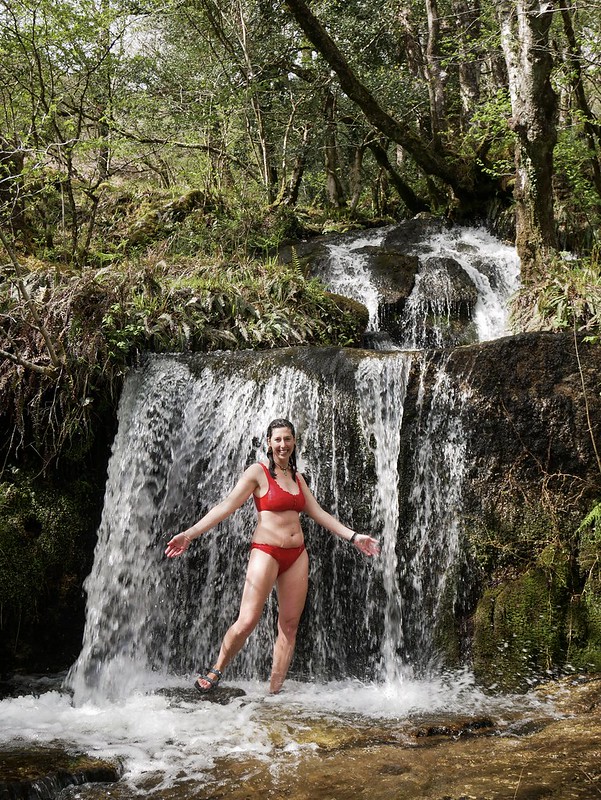 We didn’t particularly want to take the same boggy route back so after looking on my map we discovered a different route through some farmland. Turns out it wasn’t exactly a public footpath after all, but we’d walked for 20klms throughout the day and up such a steep track to get to this point that we decided to carefully climb over the metal gate. After a couple of Rambo style moves past the farm we found a very faint track that took us all the way back to Helga.

It was a beautiful national park but we much preferred Exmoor as it had coastal and inland hikes so lots of varied landscapes.