While taking a birds eye flight across England, with the help from google earth, I discovered an area in the Cornish countryside that had turquoise lakes. They looked just like milky blue glacial fed lakes but I knew that was impossible so I did some research. It turns out they were clay mines and the area was filled with them. Once they dig out the deep holes to mine the clay they eventually fill up with water and get the opaqueness from the clay. Remarkable I thought, so we headed to St Austell to check it out. 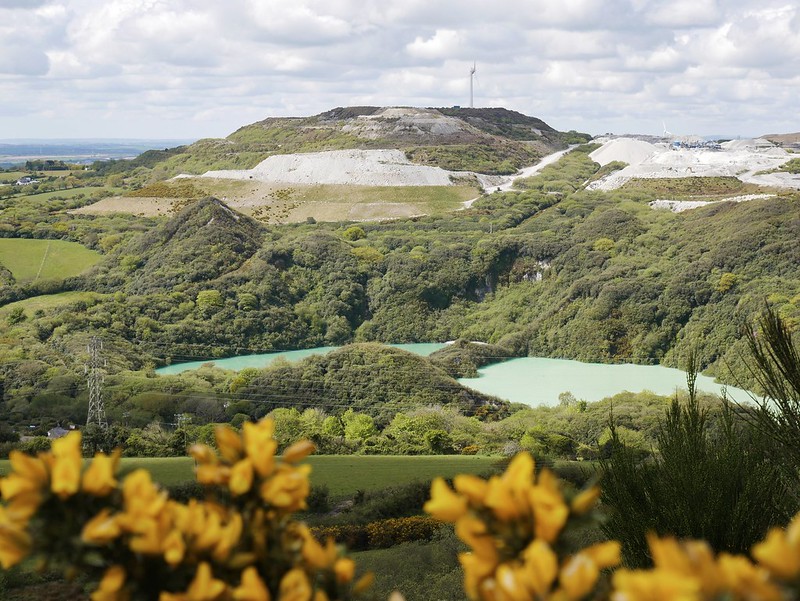 Nearby we found a ‘clay trail’ route which led past the mines and had information plaques along the way. We could see the first lake through some shrubs and the colour was incredible so we couldn’t wait to get a better view. The trail led us steeply uphill which offered a vantage point across the countryside and slap bang in the middle were two beautiful turquoise lakes. There was plenty of evidence of the mines around us with white hillsides and even ‘mountains’. In fact the locals have dubbed the area the ‘Alps of Cornwall’ as all of the unusable debris is piled up high into pyramids, usually with fragments of clay in it which makes them look like pointy, snow covered peaks. 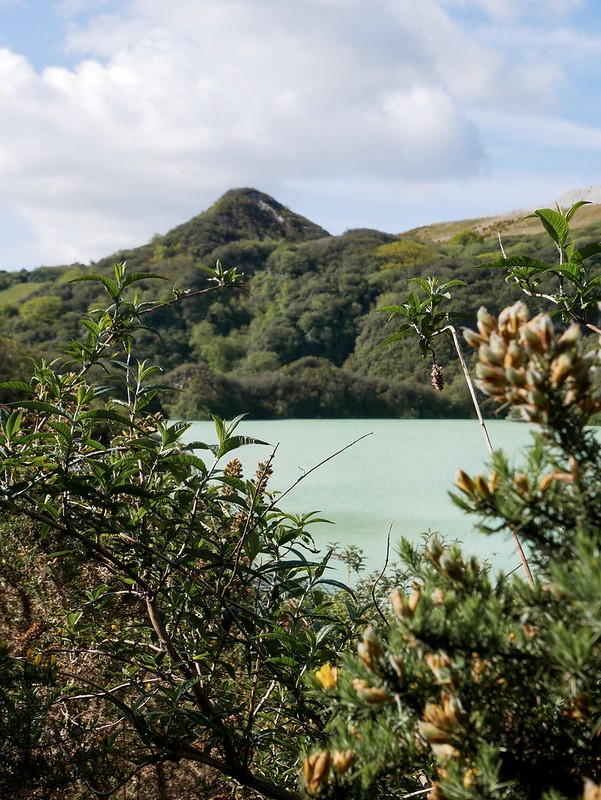 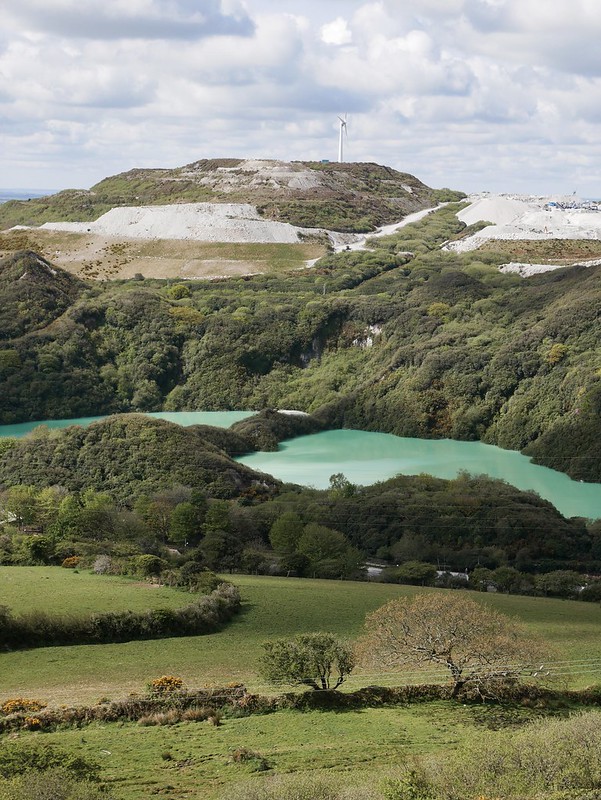 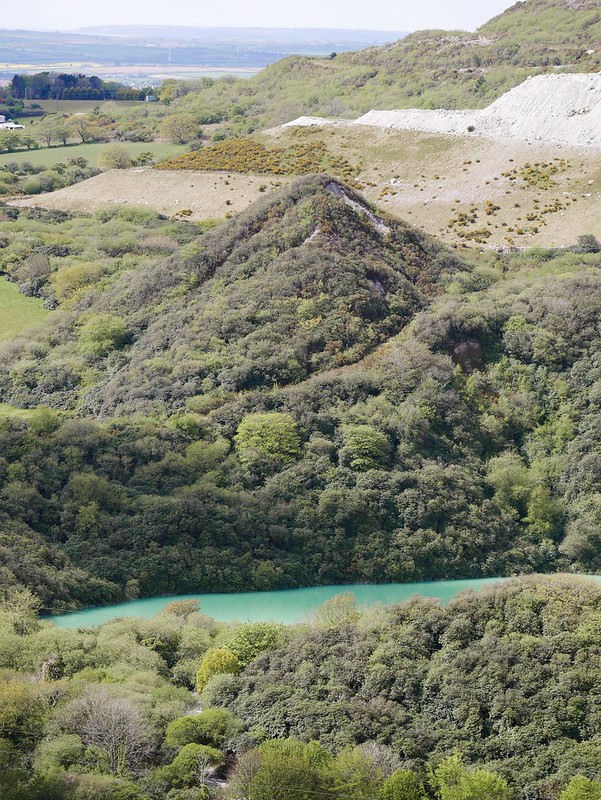 We tried to view some more lakes but they were tricky to get views of as they have security fences around them. So we decided we were happy with what we’d already seen and decided to head to Fowey. 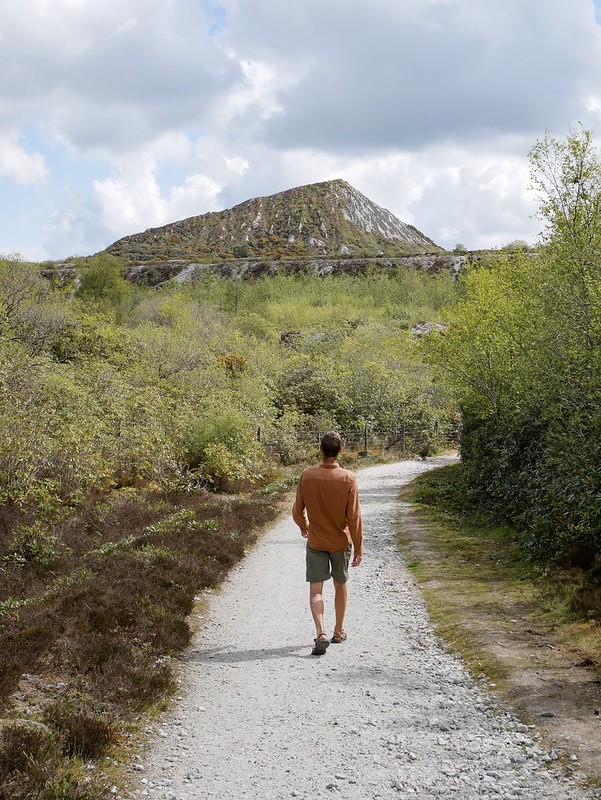 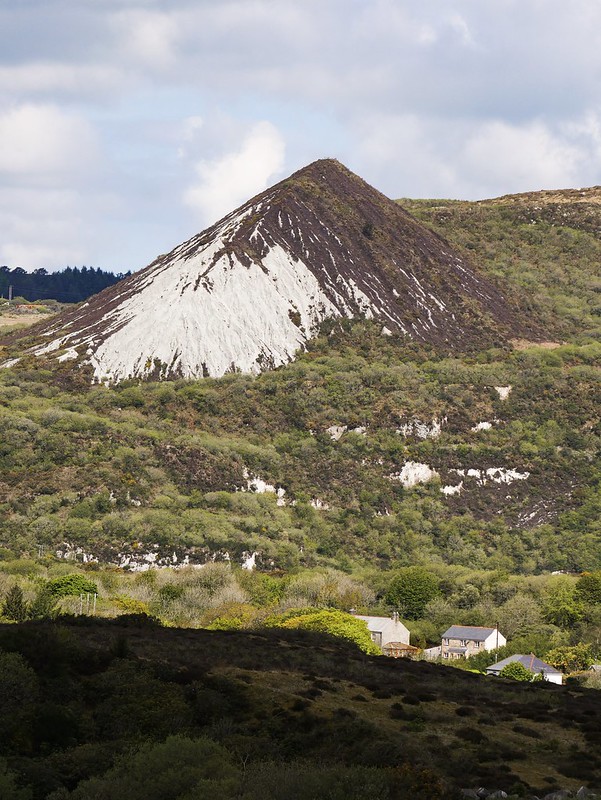 The road led us steeply downhill to the coast which always fills us with fear as we know we are now trapped and at some point we have to get Helga back up that hill. We parked close to Readymoney Beach and headed down to the calm cove. It’s a shame it was overcast again as I’m sure it would look beautiful in the sun. We did a simple coastal hike and then decided to extend the walk and have a little look at Fowey. It was a really lovely little town, set in the estuary but not far from the open sea. The shops had all closed as it was early evening but the place had a nice vibe to it with independent shops and eateries. The waterfront pubs were packed out with people and there was a large castle standing tall above the winding lanes. 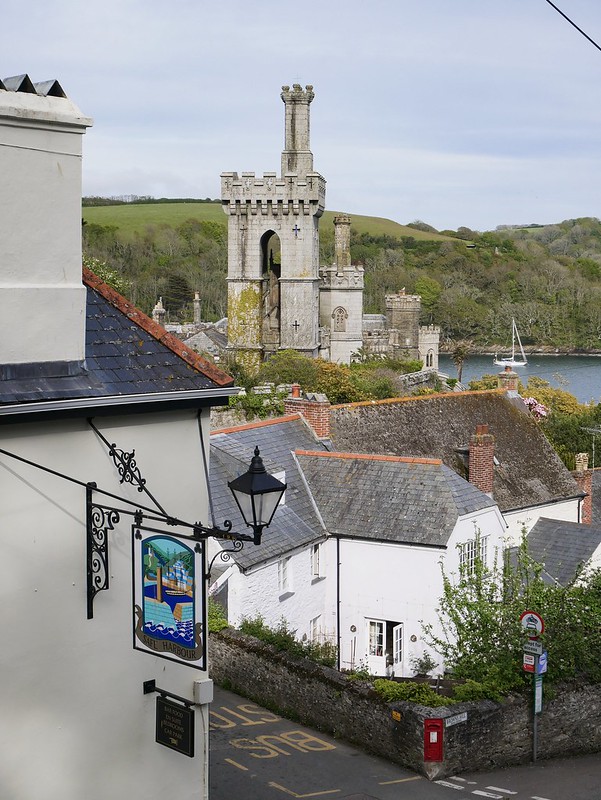 It was time for Craig to get his covid jab as he’s a bit older than me so we had to arrange a place on our route for him to get it. Luckily we didn’t have to go back to our home town as that wasn’t really a realistic option for us so instead we arranged to go to the town of Wadebridge. The appointment wasn’t until 7pm so we decided to make the most of our day in the area and head to Padstow. We skipped this town a few weeks ago as we wanted to visit the surrounding beaches in sunny weather so it was nice to return and see what all the fuss was about.

We couldn’t believe how busy Padstow was. We were still in the lockdown stage in England where you can only dine in restaurants outside so everyone seemed to be getting take aways and sitting on the harbour front. Everyone had dogs so the place felt like a professional dog walking competition was taking place and it was a bit too busy to enjoy so we were happy to escape the crowds on a hike. Padstow is set on the edge of an estuary that’s riddled with sand banks. The water was a beautiful blue colour and it looked so tropical with the sand banks rising out the water like mini islands. 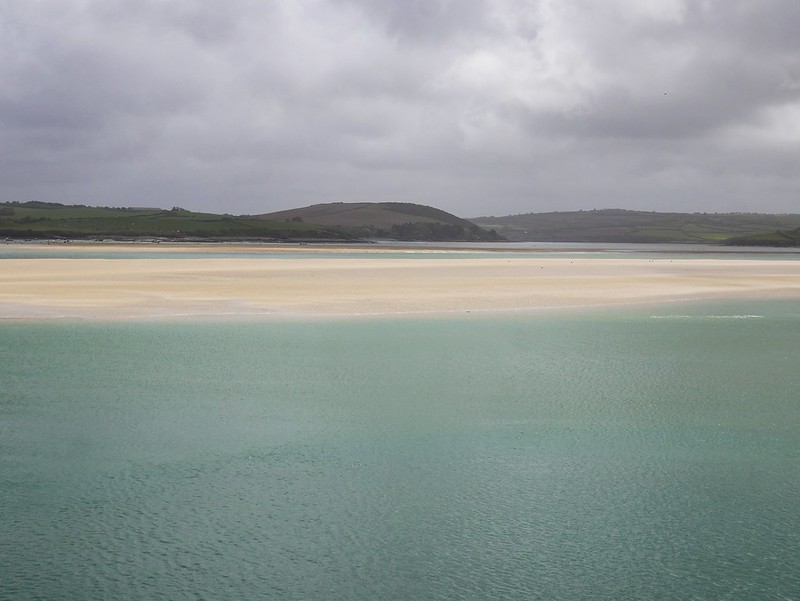 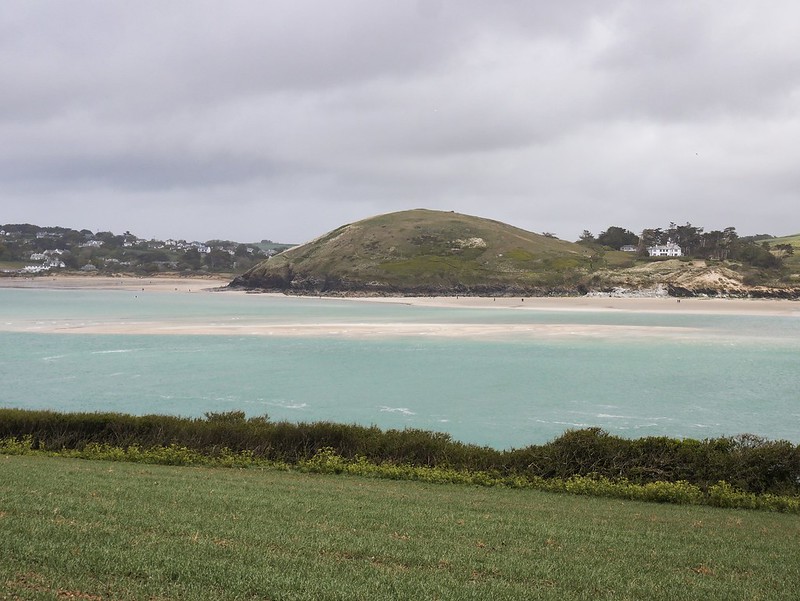 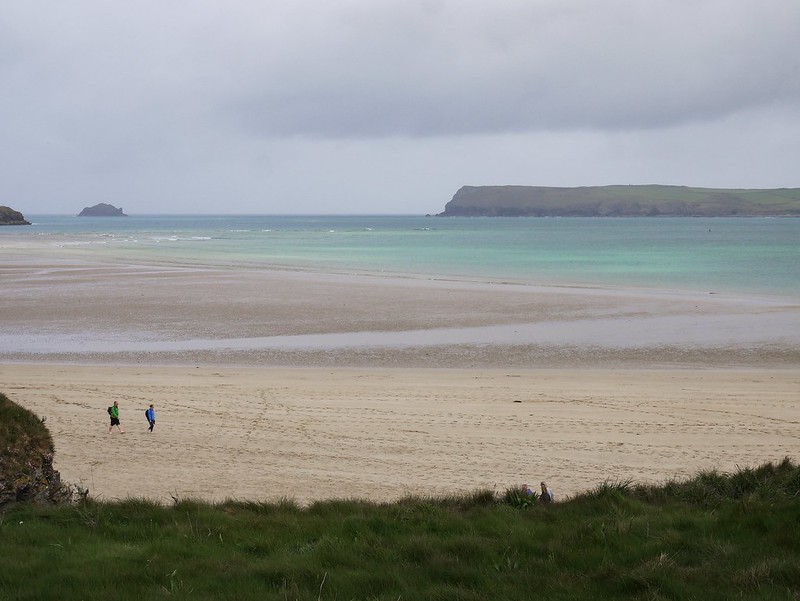 We walked about 5km along the coast and then headed back via the massive stretch of sandy beach. The tide was right out but no one was walking by the sea so we had lots of fun running through the clear puddles of water amongst the sandy little islands. Lots of giant crabs had been stranded by the quick changing tide and seagulls were feasting on them. We wondered back along the rippled sand to Padstow where we enjoyed some creamy Cornish Icecream on the harbour front and weren’t attacked by any seagulls, so overall a very successful day. 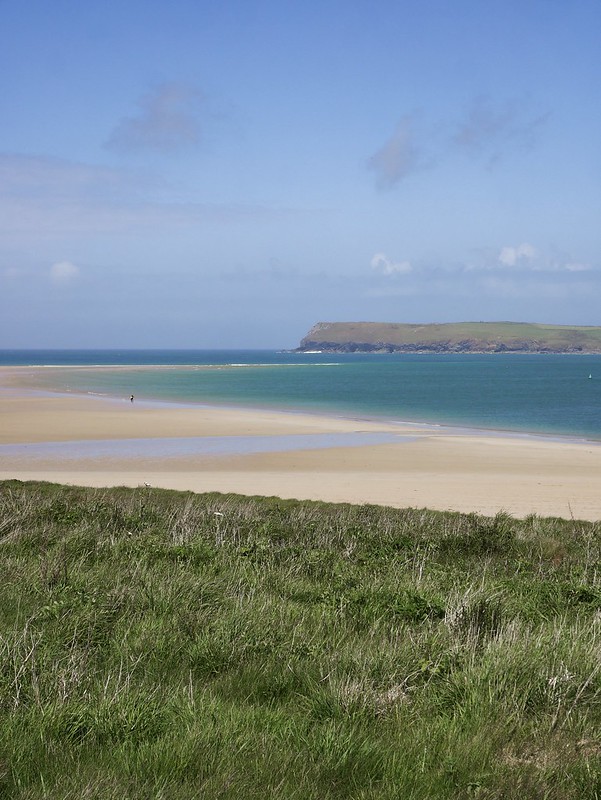 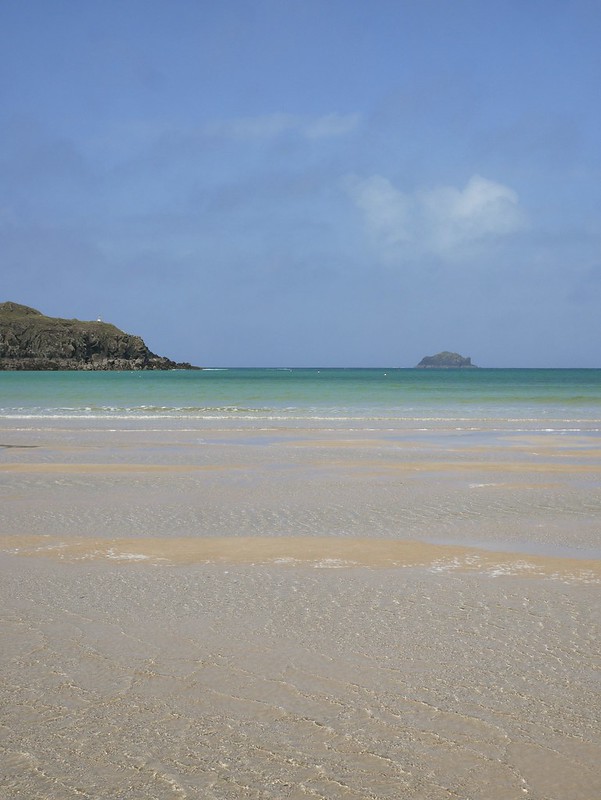 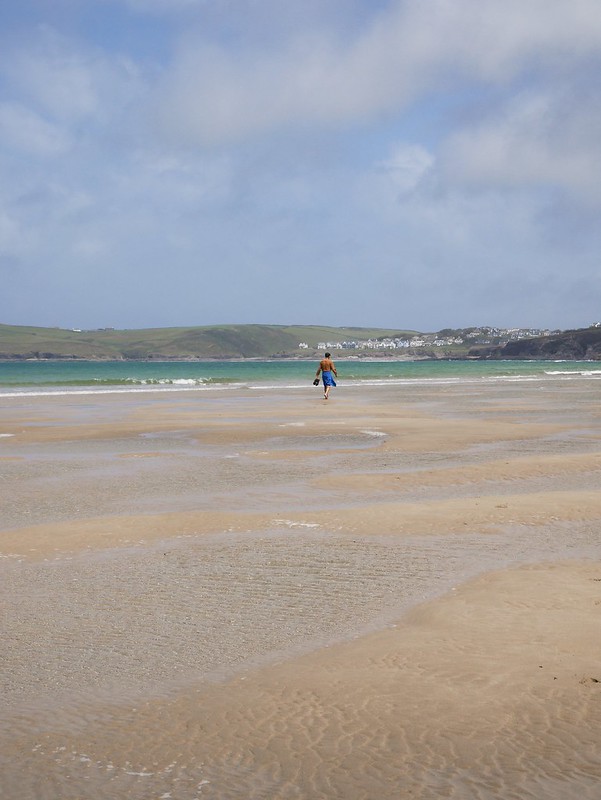 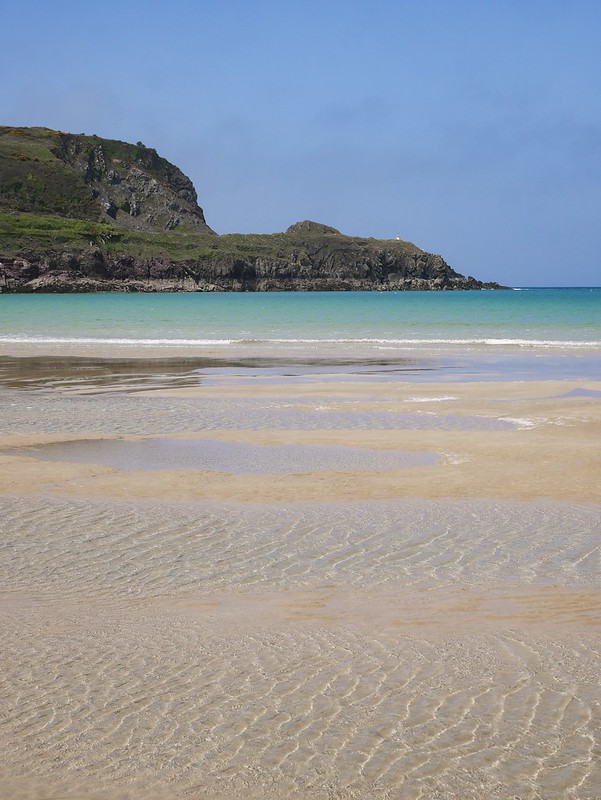