We decided to explore Roseland, a lesser visited region in southern Cornwall and to get there we took a chain-ferry across a river estuary. A sign had the different prices: car or van £7 campervan or motorhome £10. Helga is actually very tiny compared to the big Mercedes sprinter vans that everyone seems to be converting into homes these days so I think I would of had something to say if they charged us more than a van. Luckily the worker asked for £7 and I let out a very loud ‘wahooooo!’

As soon as we touched down on the opposite side of the river the heavens opened and we had a very rainy drive to the little village of St Just-In-Roseland. Craig was trying to persuade me to go out in the pouring rain but I managed to up-sell a card game and cup of tea to him. We headed out when it calmed down to a drizzle and made our way down a steep lane to the village church. I don’t know why this one was so special but the grounds were beautiful – like an exhibition in Kew Gardens. There were tropical palm trees, fluorescent pink flowers and plants with giant leaves that shadowed over us. The head stones had seen better days and some were hundreds of years old and leaning over, but the garden was an absolute delight. 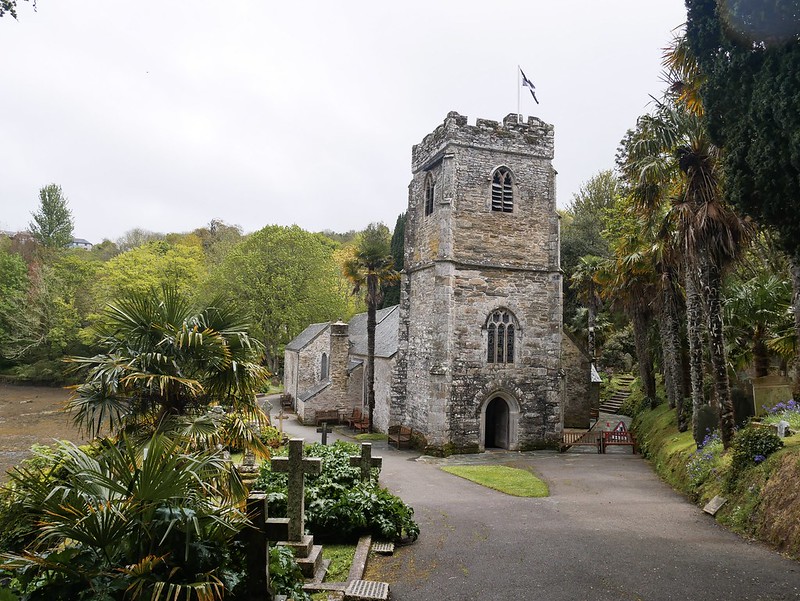 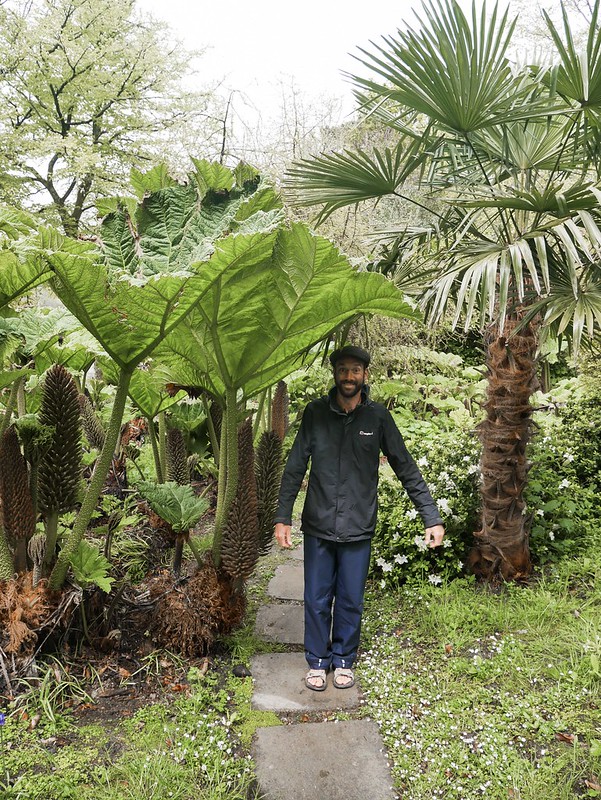 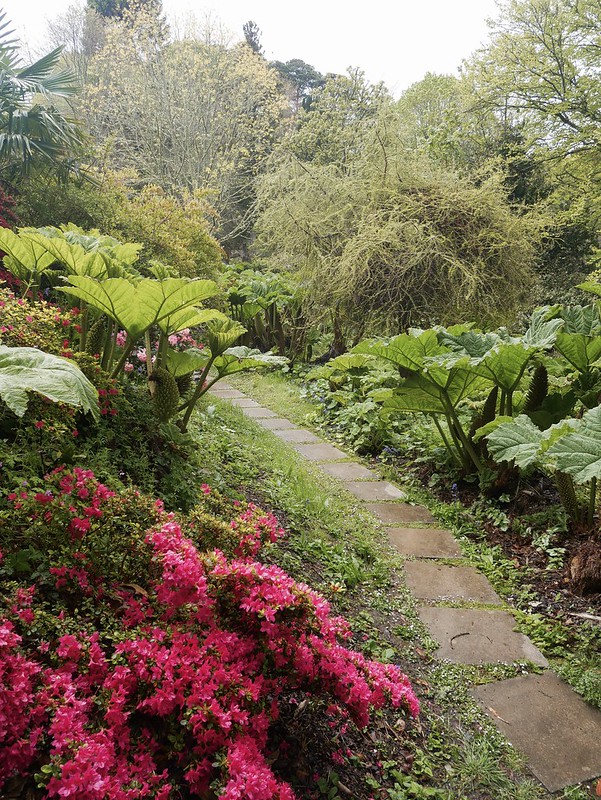 A trail led us through the countryside with the huge River Fal to our side and Falmouth in the distance. We walked down to the much bigger village of St Mawes where there was a long row of houses along the waterfront. Some of them had colourful painted shutters or neat thatched roofs. We passed an extremely old water fountain in the wall, carved from stone in the shape of a lions head but some of the face had crumbled away over the years. Craig stopped and waved his hands below the lions mouth to see if it had a sensor on it and I couldn’t believe what I was witnessing. He wasn’t joking and genuinely wondered if it would work and I couldn’t stop laughing. It was probably built 300 years ago!!

We decided to treat ourselves to some Cornish Icecream and enjoy it in the sun…quite a surprise after it raining so much earlier. We wanted to do a loop walk so we continued along the coastline, walking parallel to a different river with plenty of boats moored up and bobbing in the water. 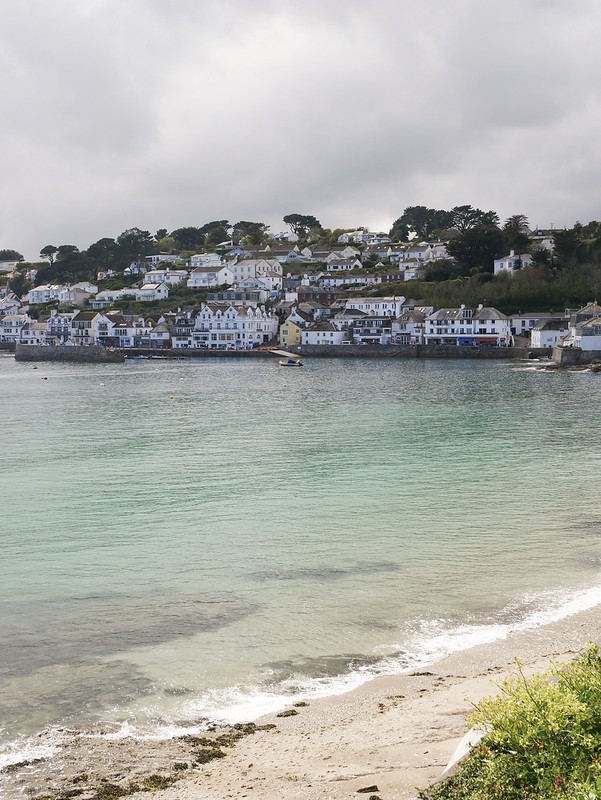 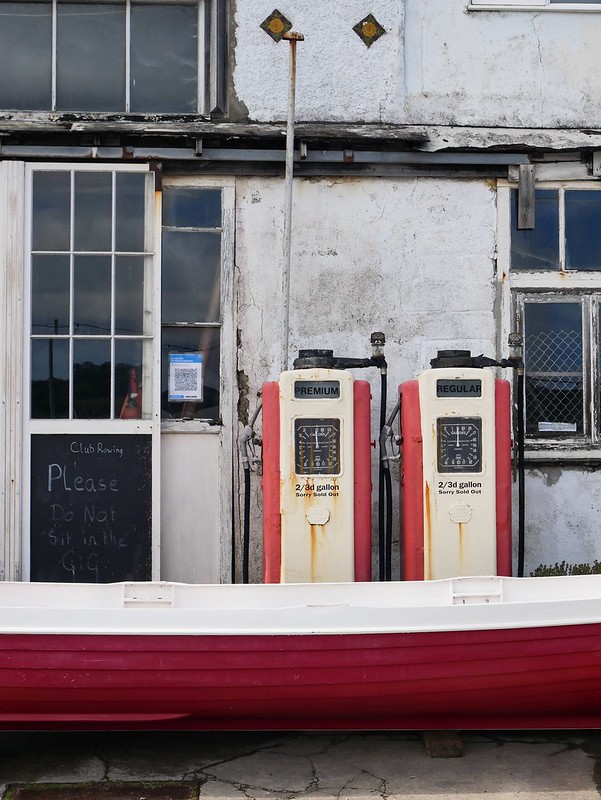 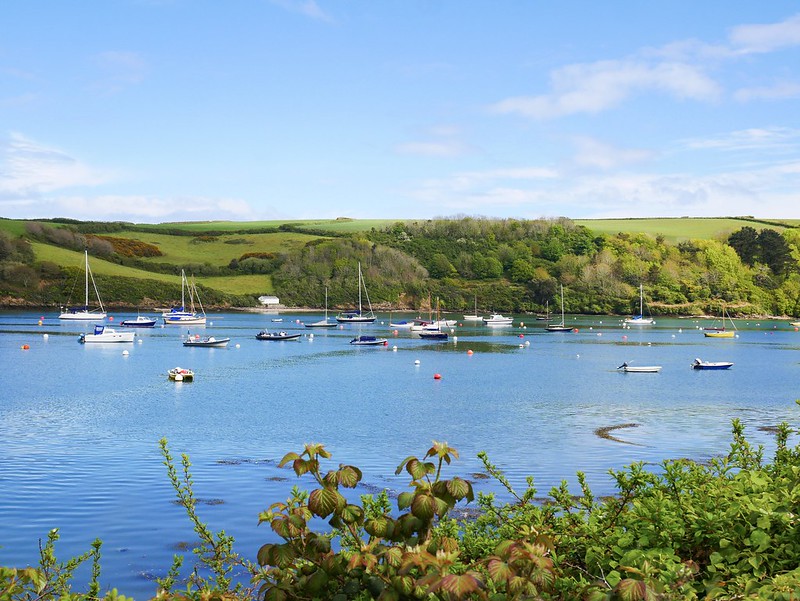 We spotted an unknown animal skeleton laying beside a tree. It had large canine teeth and we wondered if it was a fox. It was really well preserved so we were tempted to keep the skull in our van to go along with Ronnie the rat but we decided it might be a bit too much. When I added a photo of it onto my Instagram quite a few people said it looked like a cat (but to be fair the same amount of people said it was a sabre tooth tiger). So I’m glad we didn’t keep it as it would of felt like we were taking someone’s pet cat on a spiritual journey across the UK. 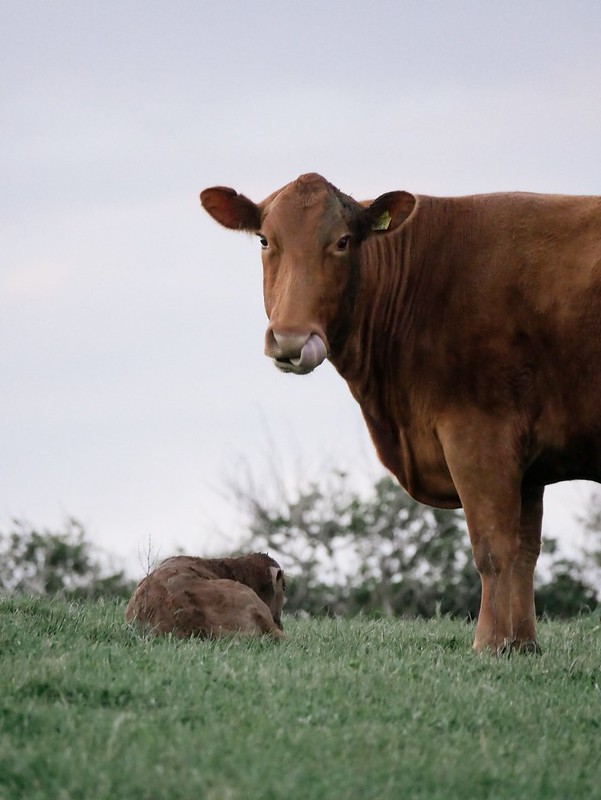 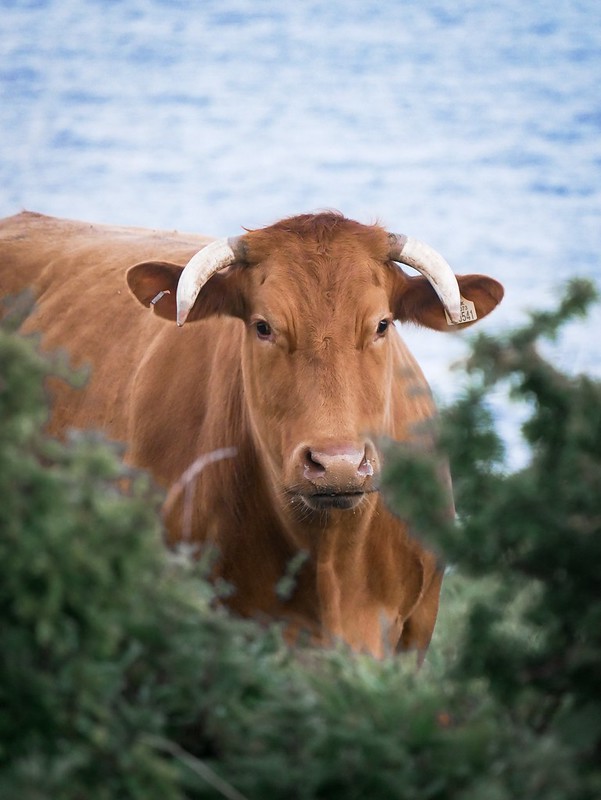 That evening we managed to find a perfect layby to sleep in on a very narrow and extremely quiet road. It was a lovely spot, utterly silent, just us, a field of cows and a view of the sea. The weather was still a bit iffy but it was wonderful to watch the storms passing by from the van; across the sea we could see rain falling from grey clouds and then vibrant rainbows appear. 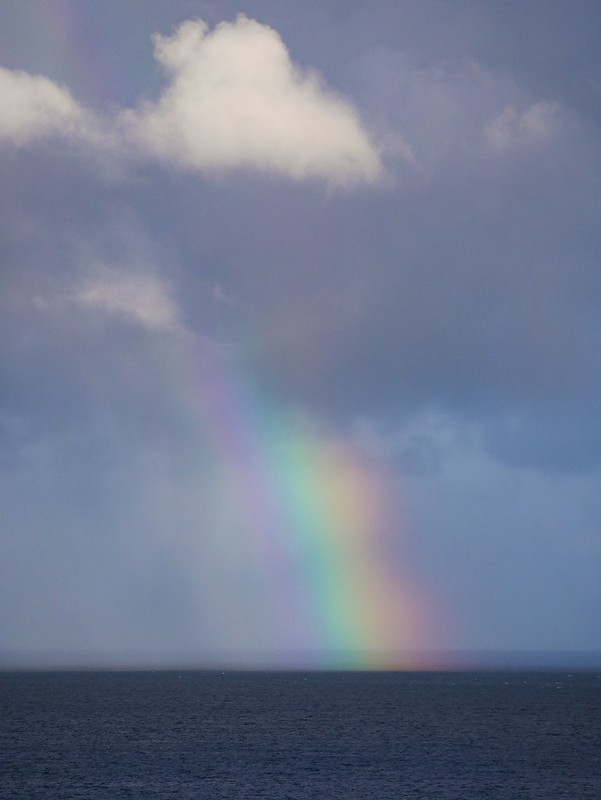 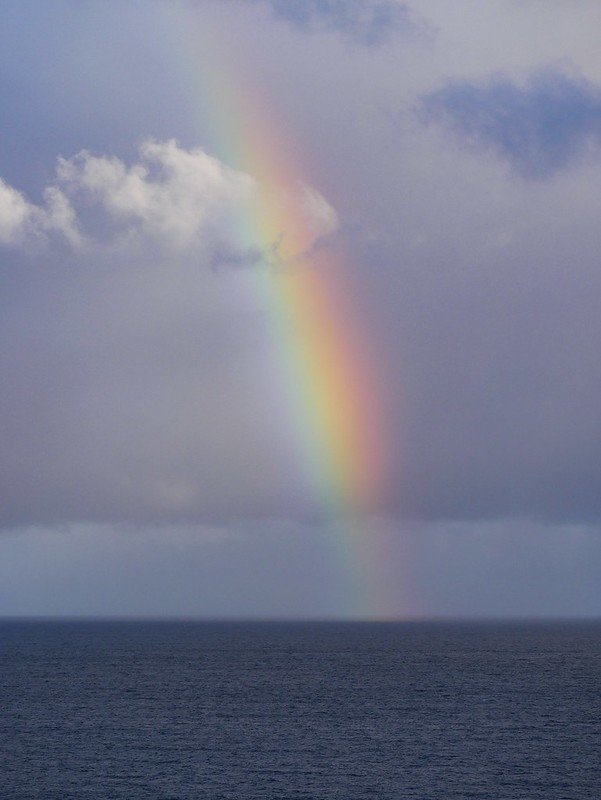 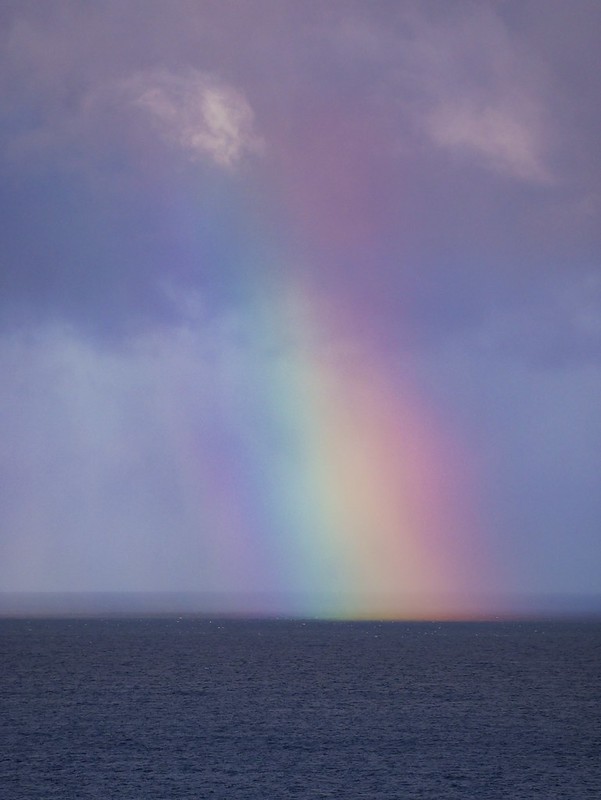 The following day we woke early and checked out some of the beaches along the coast. Most of them were inaccessible and just viewable from the path high above on the cliffs. One of the beaches turned out to be home to about 20 seals!! We were so excited as it’s the first wildlife we’ve seen on this trip. Most of them were lounging on the sand like giant slugs but a few were swimming in the sea. I love how they swim like Olympic medalists yet they waddle on the beach like their faking an injury for dole payment. 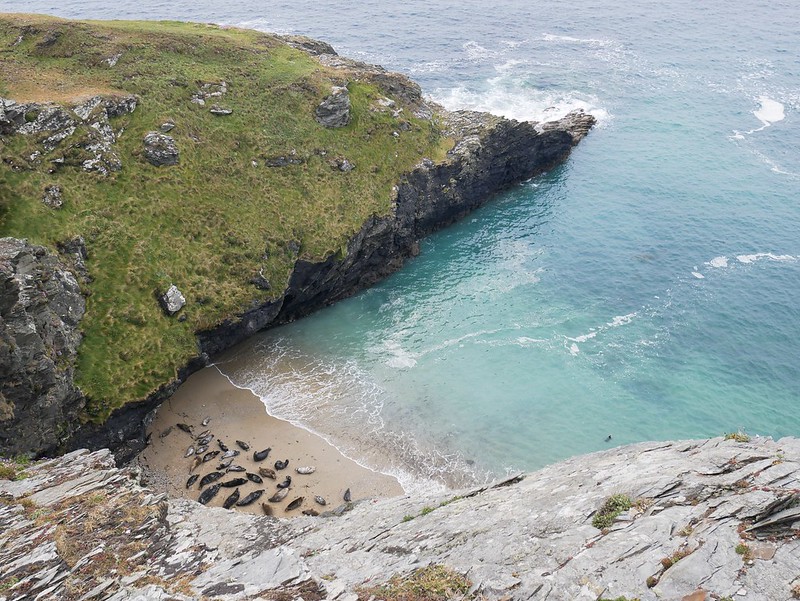 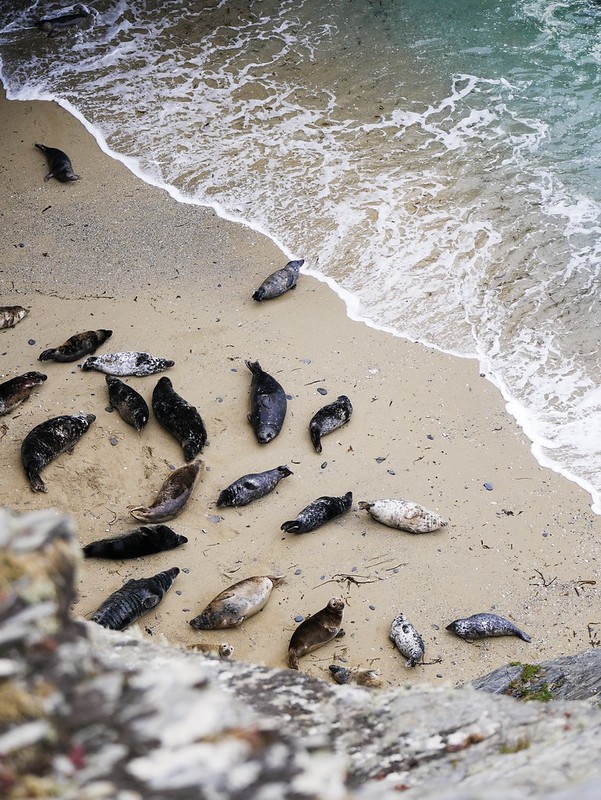 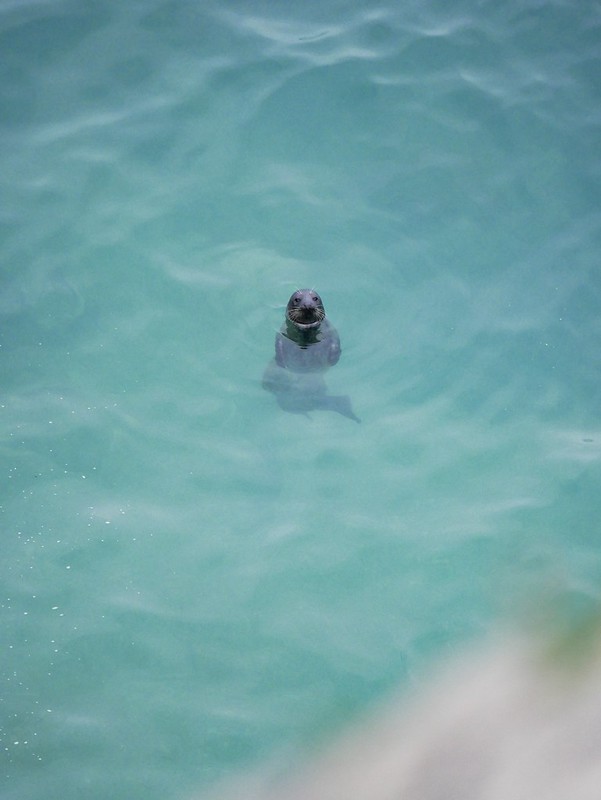 It was only about 8 in the morning so we had the view to ourselves and spent a good 20 minutes observing them from the cliffs above. After all that excitement we walked around the circumference of the Peninsular, all the way down to St Anthony Head. There were some pretty beaches around the area but it was hard to appreciate them as the weather had turned rather gloomy and rainy. 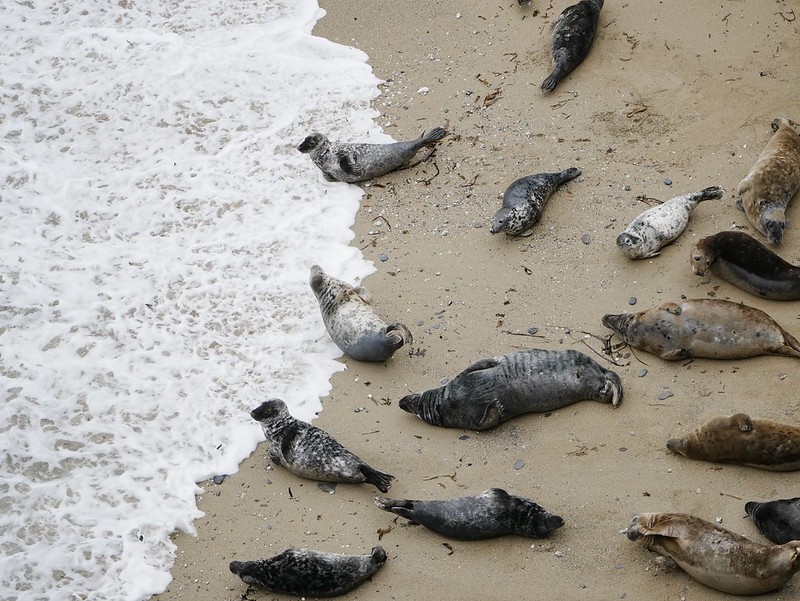 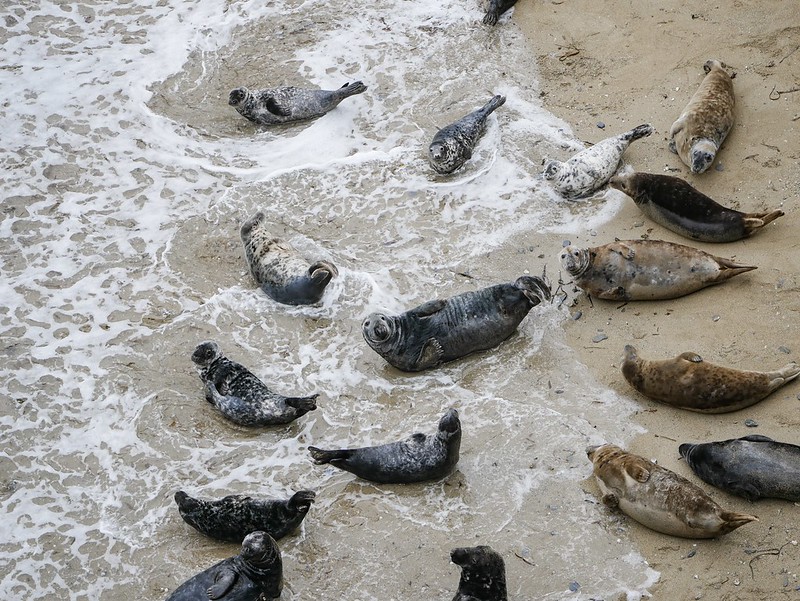 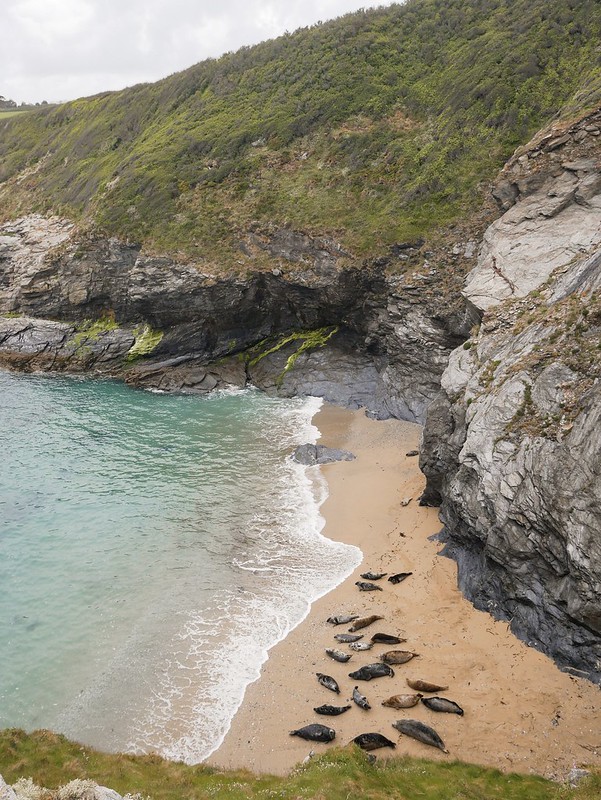 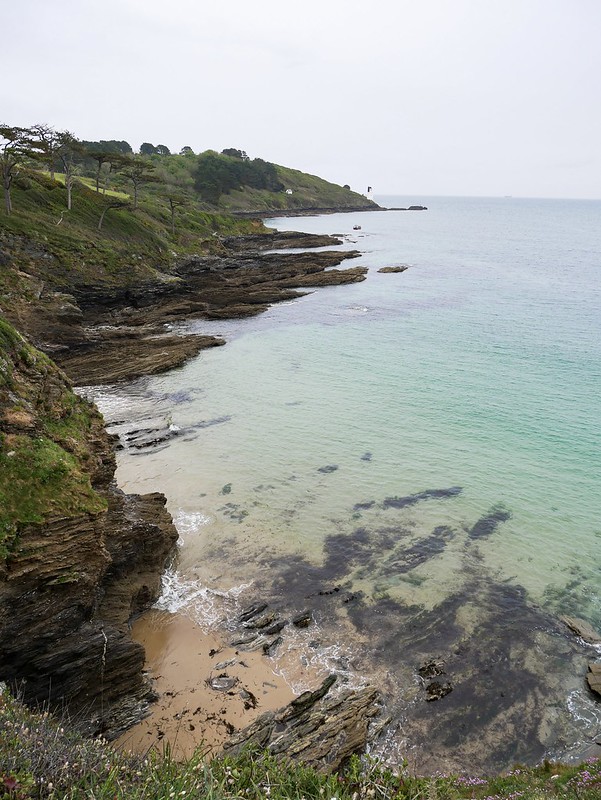 By the time we got back to Helga we were pretty cold and sodden so we decided to treat ourselves to a hot shower in the van. We loved how quiet the area was so we decided to just relax for the rest of the day and camp one more night in this spot. I baked some cookies and we played card games until sunset when the rain stopped and we headed out to watch the clouds change colour. We had a beautiful view of the turquoise sea lapping the beach below us with pink clouds above. 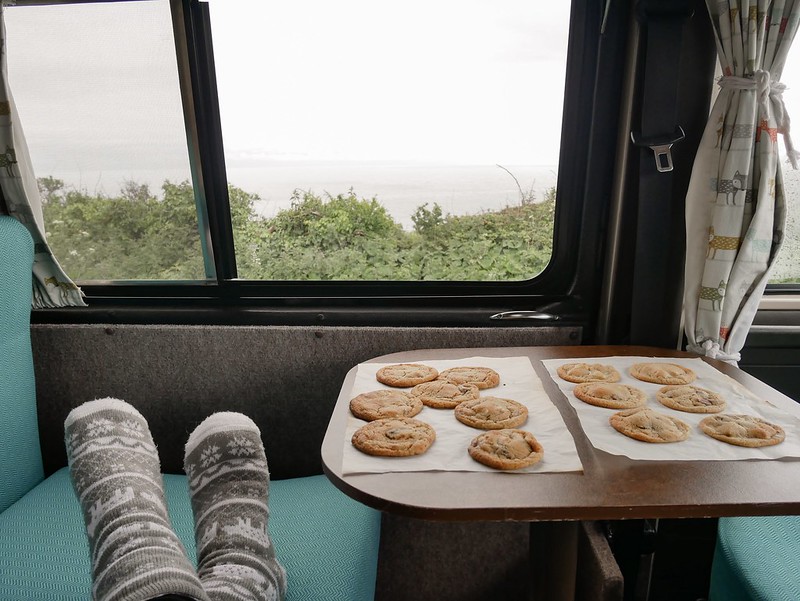 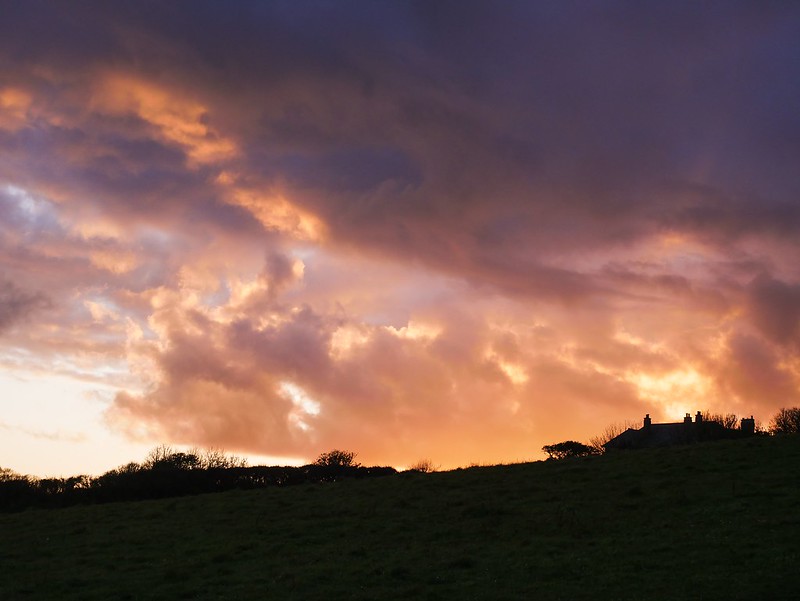 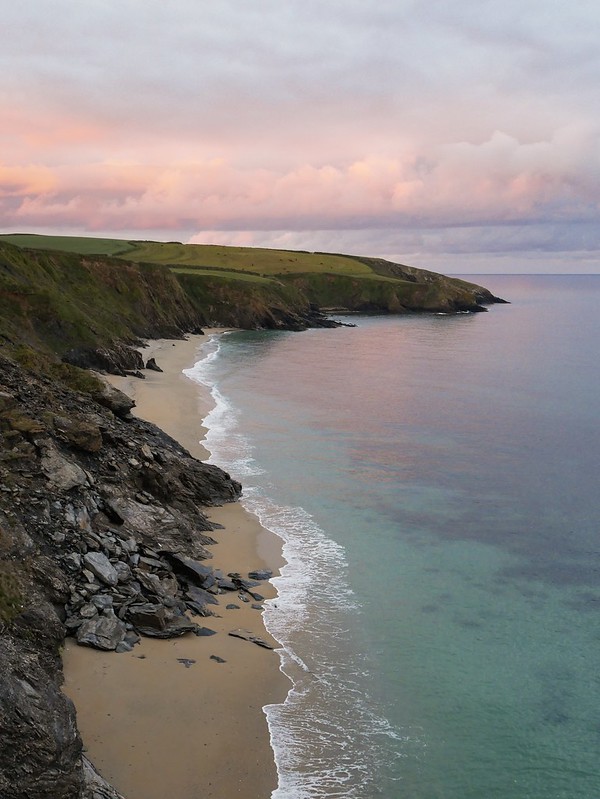 The following morning we set off and headed to Carne Beach where we based ourselves for a hike. Our plan was to walk along the headland down to Portloe, a little fishing village but it took a hell of a long time to get there. The trail was wonderfully quiet though and we only passed a couple of people who wasted no time in remarking that they thought sandals were impractical to deal with all the sheep shit on the trail. We laughed it off, knowing our feet were enjoying the sunshine and not in hot sweaty boots. We bid them farewell and when I looked back further down the track I noticed a sheep was being stubborn and not moving out of their way, we had a little giggle but as I turned to look where I was walking I managed to launch my foot (toe first of course) into a fresh pile of sheep poo. 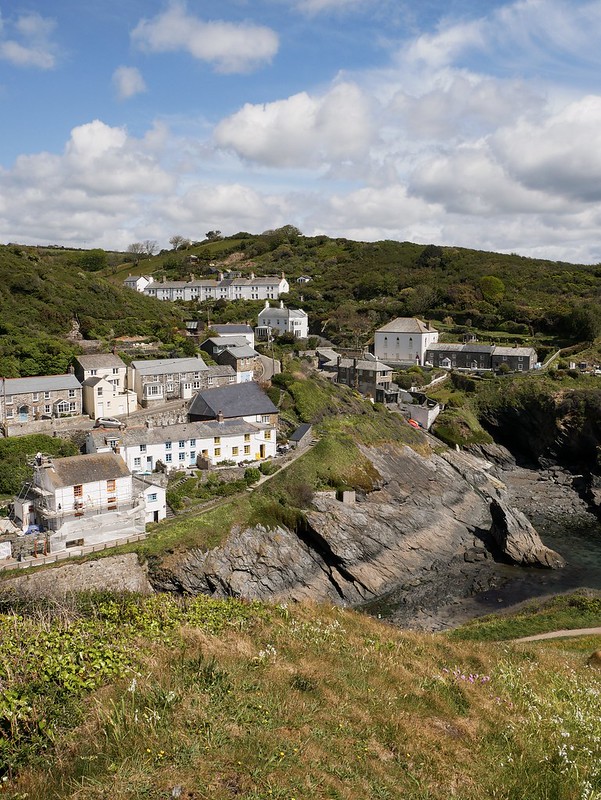 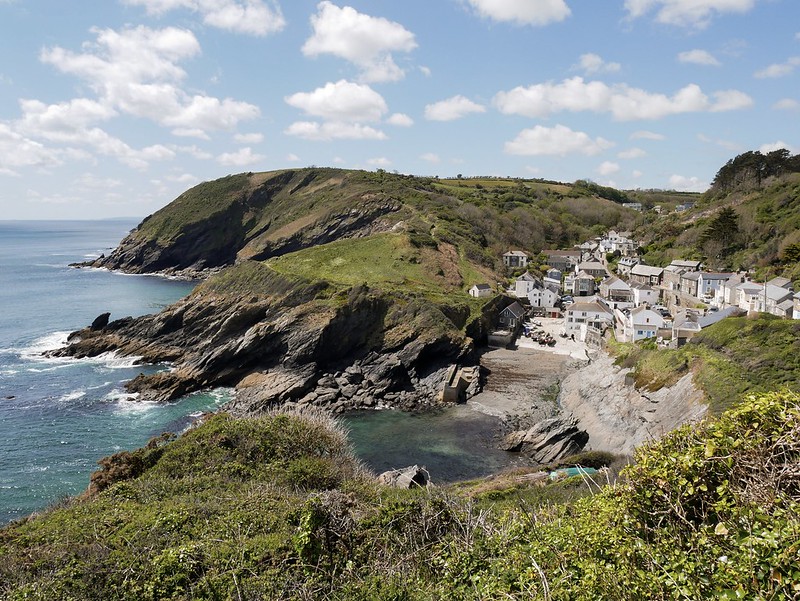 We approached Portloe from the cliffs above and to be honest it seemed a little overrated. It was cute but nothing special, we walked through the village and up the opposite cliff side to get a view of the entire area before setting off on our loop hike back. This route was through the countryside and our aim was to visit Veryan which I’d read was home to four circular thatched houses. We didn’t know where they were in the village and were mislead by some sort of hand drawn map to walk a kilometre away. We did find the cute little houses, marking the entrance to the village with one house on either side of the road. I read somewhere that they built them round so that the devil didn’t have any corners of the house to hide in. They were circular houses but with rectangle extensions on the back…I’m not sure if that was an original feature or something they added when they realised how inconvenient it was trying to fit furniture in a house without any flat walls. Turns out we didn’t need to do the detour as the other two houses were on our route out the village after all! It was a bloody long hike by the end of it and we were shattered when we got back to Helga. We were parked at a big slant but we couldn’t be bothered to move yet so we just had a cup of tea and watched the perfect rows of rolling waves out our window. 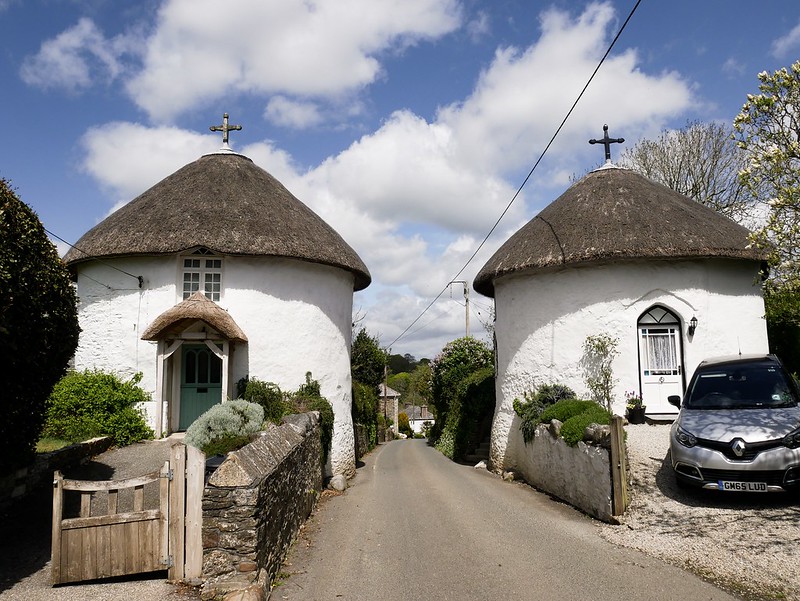 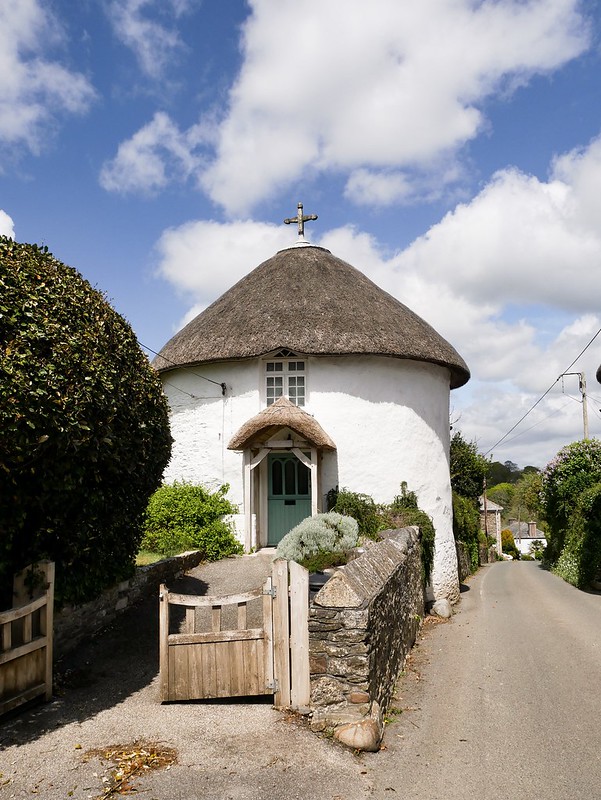 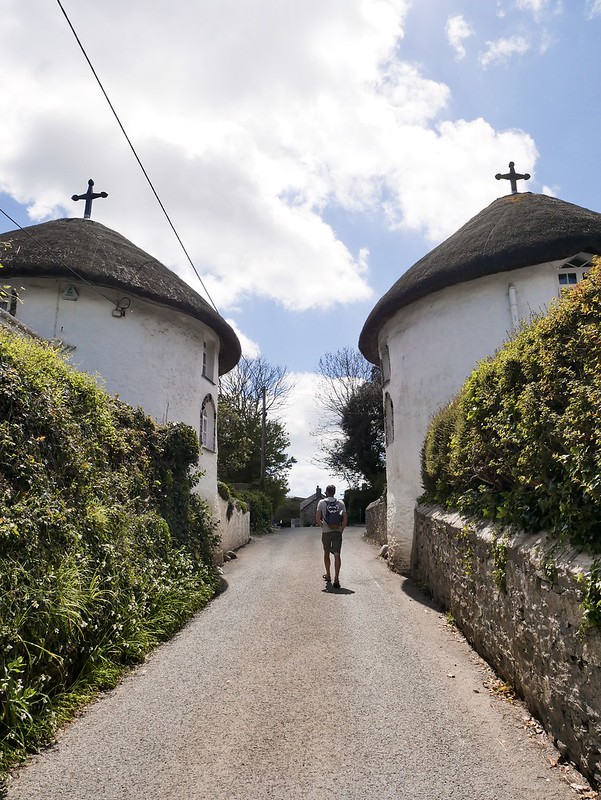