We didn’t know much about the Lizard Peninsular, although I think that’s the case for most places we’re visiting in England as we are yet to buy a guide book. All I knew was it was home to Kynance Cove which is said to be one of Cornwalls most beautiful beaches. The bottom of the Peninsular also marks the most southern point on mainland UK.

We parked in the little village of Lizard and followed the public footpath to the coast. It was a very pretty area with neat green pastures and lots of sea views. The weather was wild and windy with a sea mist filling the air, which is becoming a bit of a theme in Cornwall. The sea was so churned up and choppy that there was a thick layer of white foam being sloshed around a rocky cove. But it wasn’t bubbly foam, it looked so silky, like perfectly steamed milk for a cappuccino. We joked that the nearby Clotted Cream factory must’ve had an explosion and leaked into the sea. 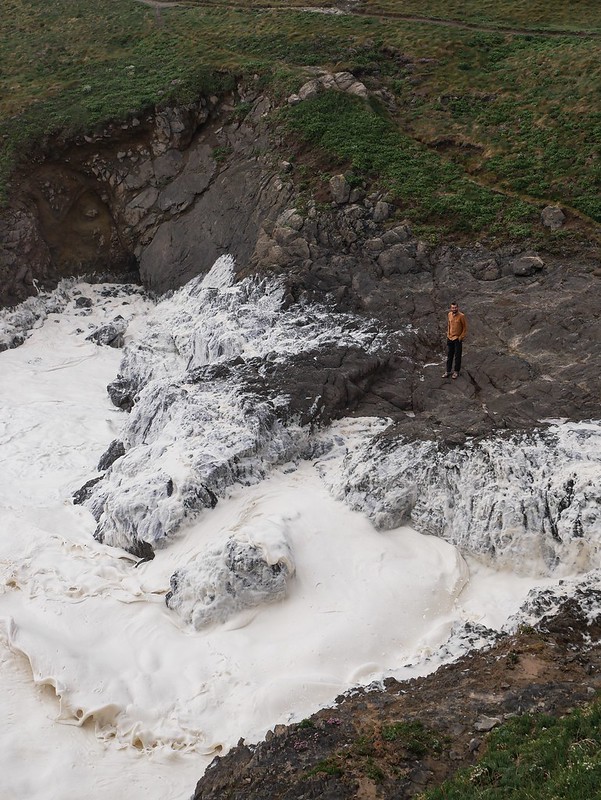 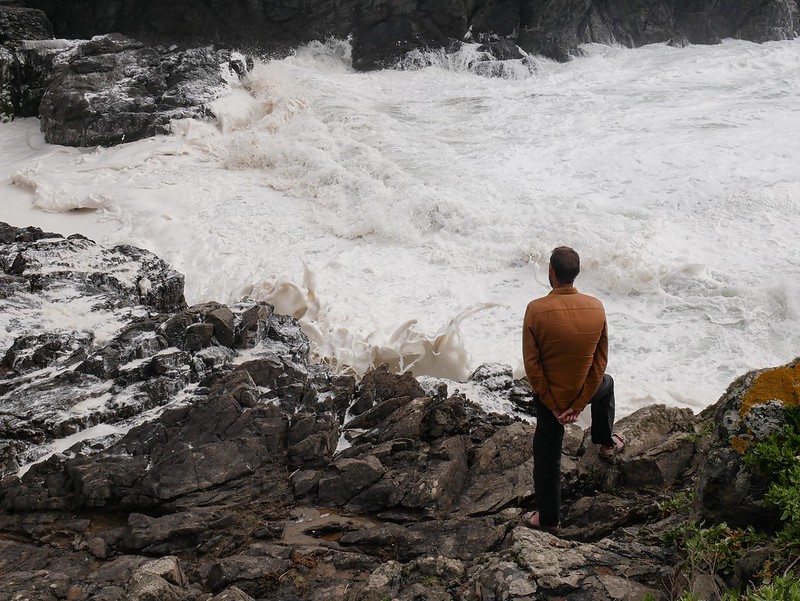 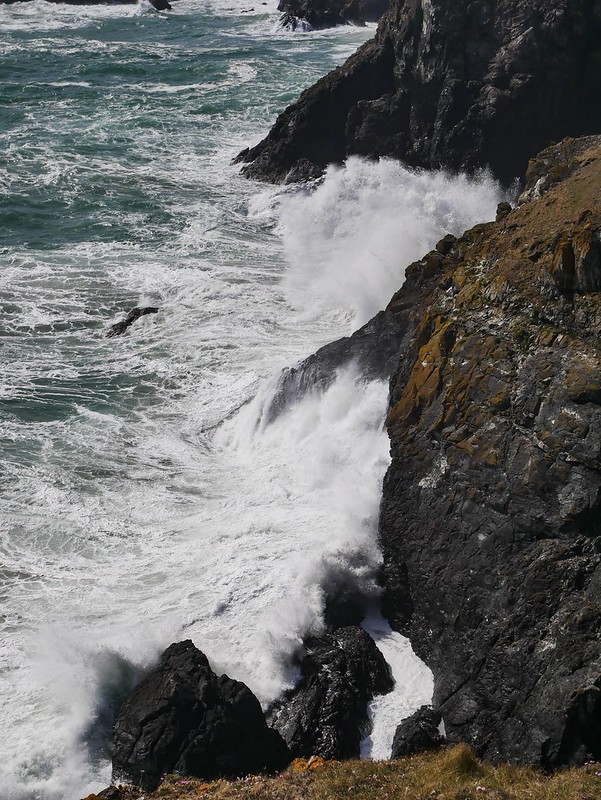 The trail continued over the cliffs with great views of the rugged coast and waves crashing into rocks, spraying everywhere like a fizzy drink exploding. It was high tide so when we arrived at Kynance Cove there wasn’t actually any beach visible, it was just pointy islands rising out the water. There was a cute cafe nestled in the valley just above the beach and a few people trying to enjoy sitting outside and act like it wasn’t blowing a gale. The footpath went down via the beach at low tide and along the cliffs at high tide. We were trying to gauge if we could make a run for it across the beach, but every time we speculated and said ‘now!’ a new wave crashed into the beach with such force, we literally would of been wiped out and flushed into the sea. So we opted to head back the way we came and maybe return later to see it at low tide. 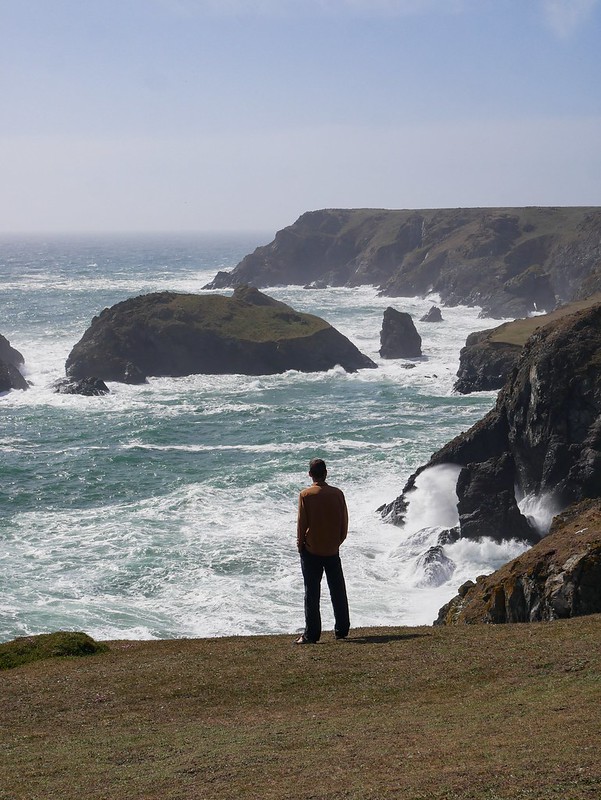 We took the path all the way down to the most Southerly Point which was very simple and rustic with just a tiny plaque – much more our style than Lands End. The sea around has numerous shipwrecks hidden in the depths. In fact the Guinness book of records lists this area as undertaking the biggest rescue in the history of RNLI. The huge boat was on its way to Southampton from Australia but it misjudged it’s location in heavy fog and crashed into an underlying reef. Over the next 12 hours all 456 people were rescued and no lives lost. 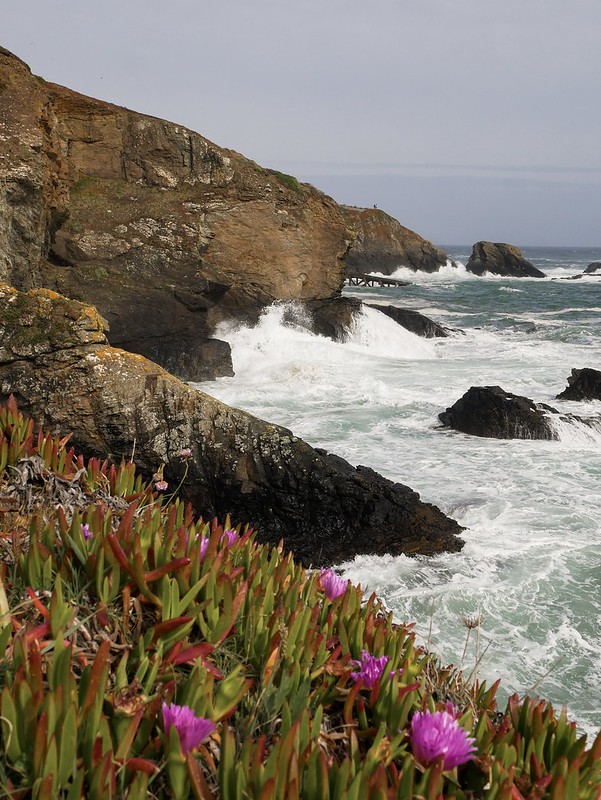 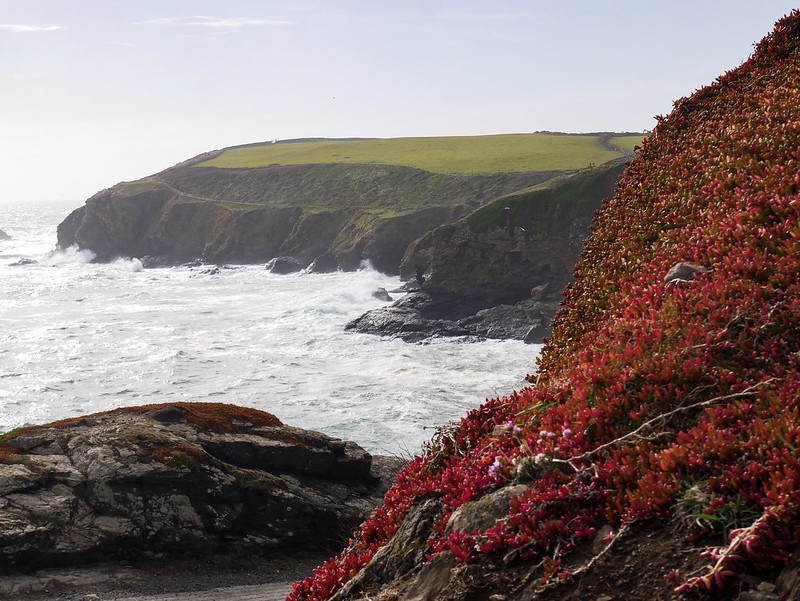 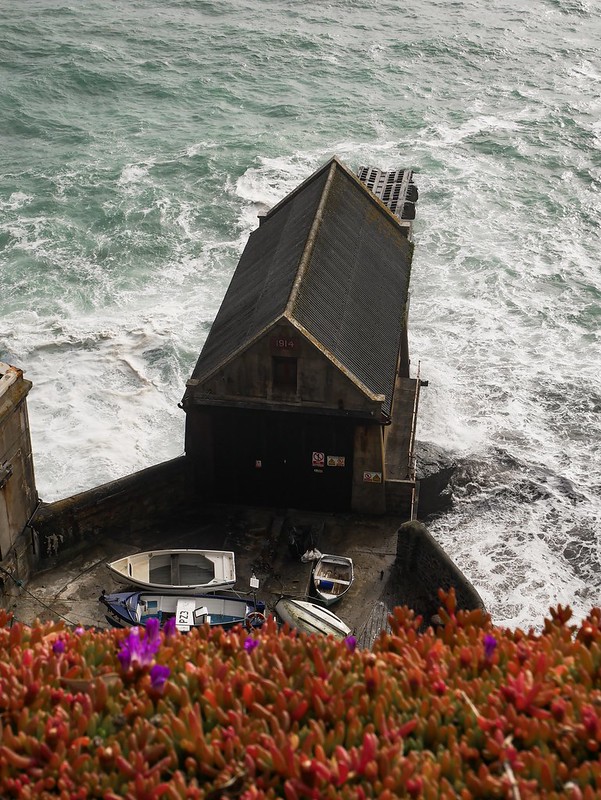 There were some really interesting plants growing on the cliffs, almost like little red succulents, whatever it was they gave a lovely pop of colour to the area. We’ve seen a lot of coastline in the past few weeks exploring Cornwall and Devon and while some areas we shrug our shoulders at and say it was ok, others really impress us and the Lizard Peninsular was one of them. We decided to head back to Kynance Cove for sunset but there wasn’t too much action and just a couple of pink clouds in the sky. 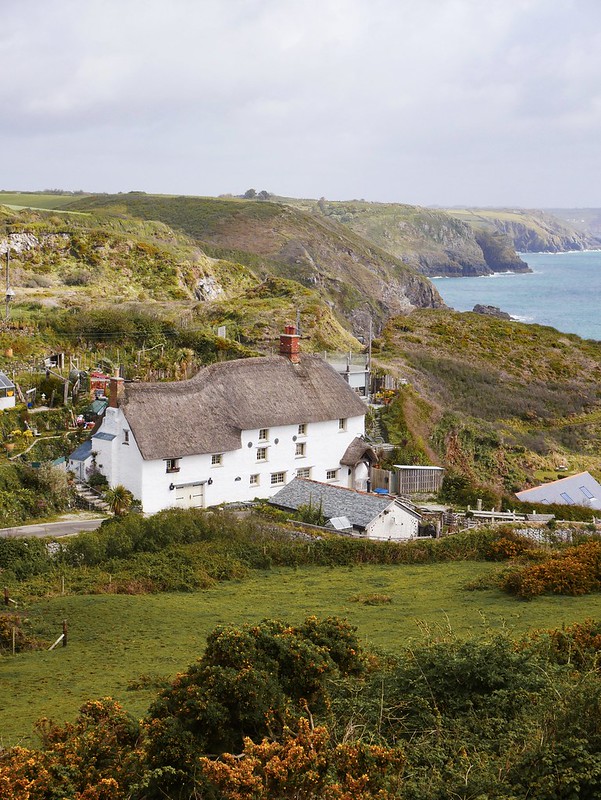 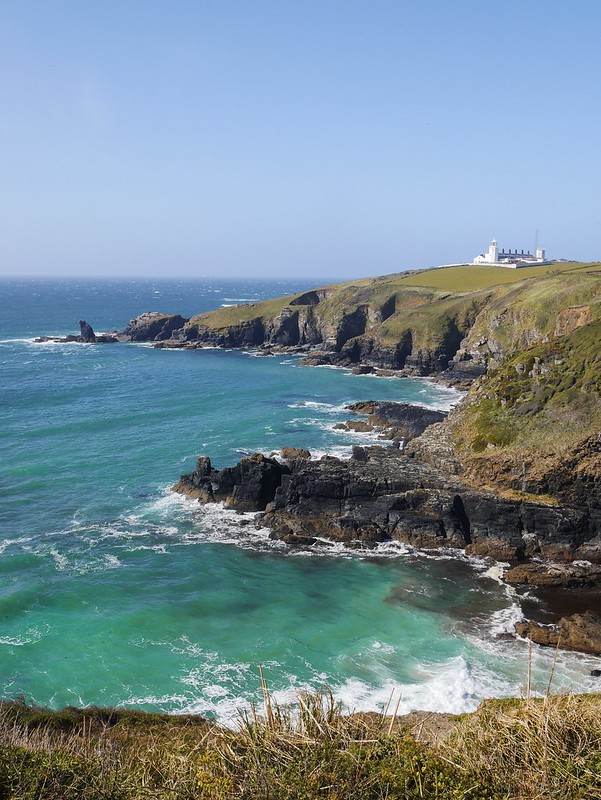 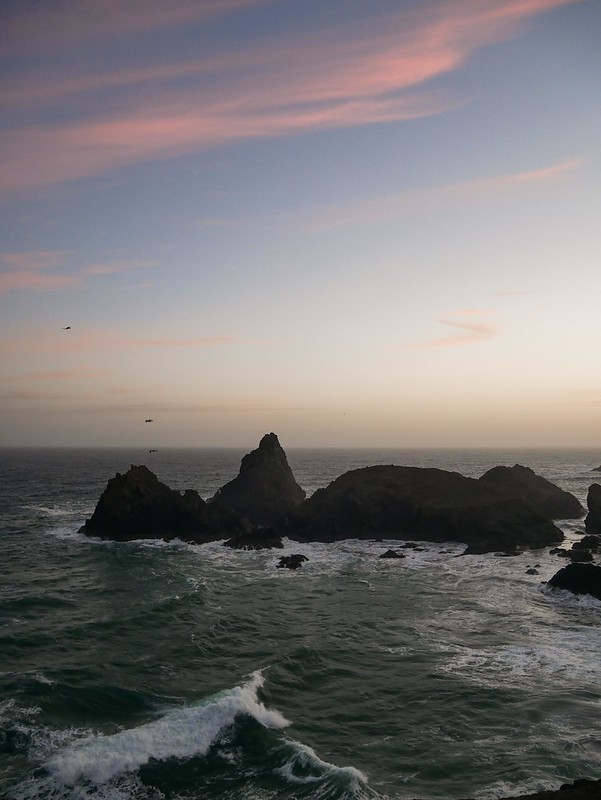 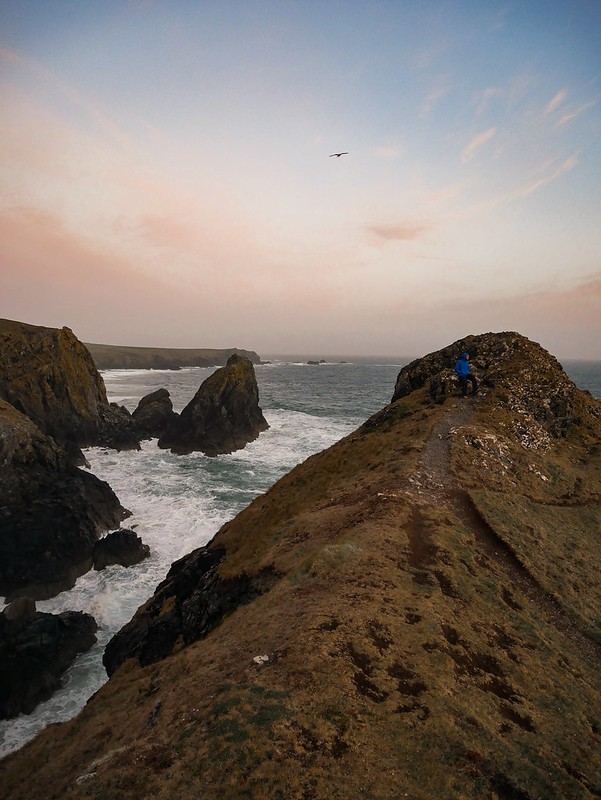 We liked the area so much that we decided to stick around another day. The following morning we hiked from the southern point up along the east coast where we were treated to more beautiful views. Afterwards we decided to give Kynance Cove one more try and head there at low tide to at least see it with the double beach exposed between the island. It definitely looked it’s best today, but the weather was still extremely windy so it wasn’t quite the turquoise bay we were hoping for but a very pretty spot nonetheless. As we hiked above the beach on the cliff tops the weather quickly turned and we were caught in a rain storm which was a bit of a drag but probably our sign to hit the road and head to a new area of Cornwall. 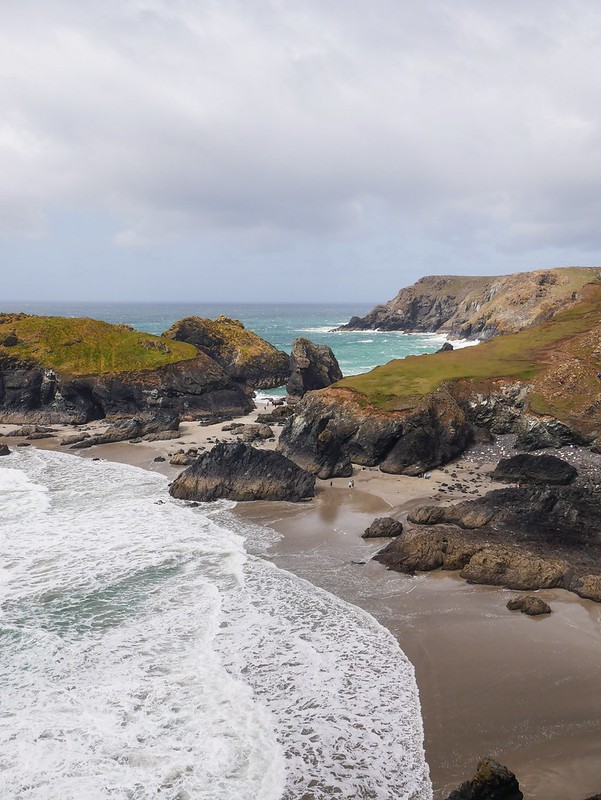 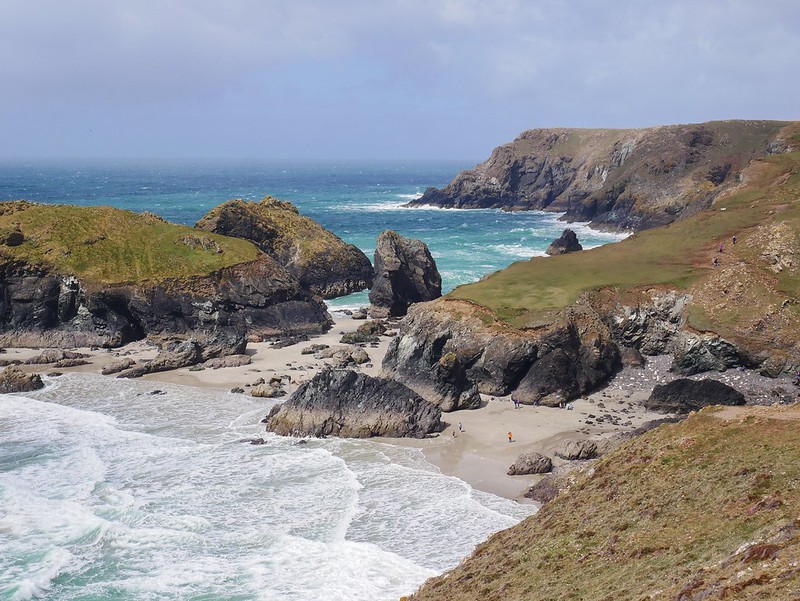 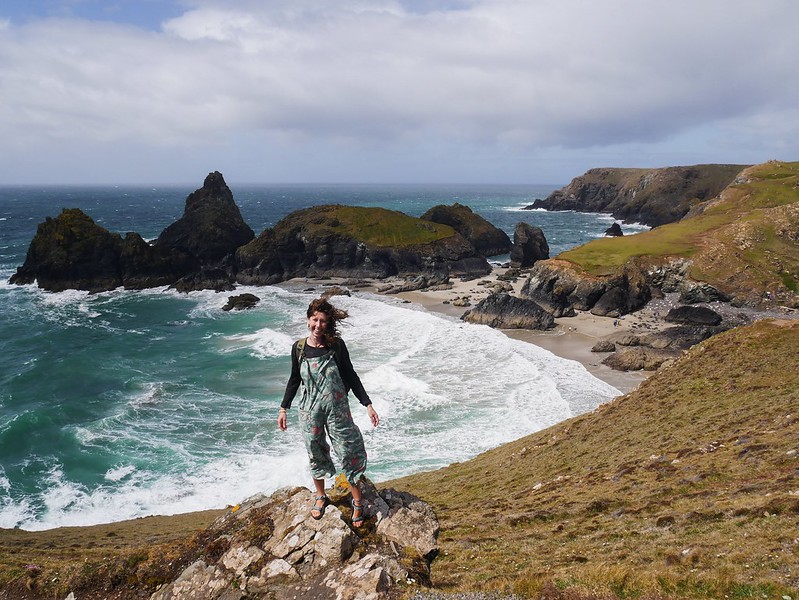