Lands End marks Britain’s most south westerly point, a claim to fame that seems a little ridiculous really as it’s not the most westerly or southern point, it’s just making up its own rules. But alas it’s become a very popular landmark and people like to cycle the route from John O’ Groats in Scotland to Lands End, Cornwall. Beyond the headland there’s nothing but endless sea until you reach the USA. I did some research about visiting the area and it sounded very over commercialised and tacky. The parking was £7 and apparently you have to pay just to have a photo with the sign so we made the executive decision to give it a miss. Instead we headed further down the coast to Porthcurno Beach. From there we followed a high trail that took us above Pedn Vounder Beach. I’d seen photos of this beach and desperately wanted to visit as it has tropical looking sand banks. The weather started off beautiful so we got some nice views of the beach and then we got rather carried away rock climbing along the headland. It was early in the morning so we had the place to ourselves and were having lots of fun exploring. We even managed to find a random animal skull on the floor and it was so perfect we decided to keep it. It’s now called Ronnie (we suspect he was a little rat) and he has pride of place on our dashboard beside Clive, our cacti. Ronnie’s back teeth have neat little rows of molar teeth, each one about the size of a grain of sugar. His front teeth however are like mini daggers stolen from the Burrowers. 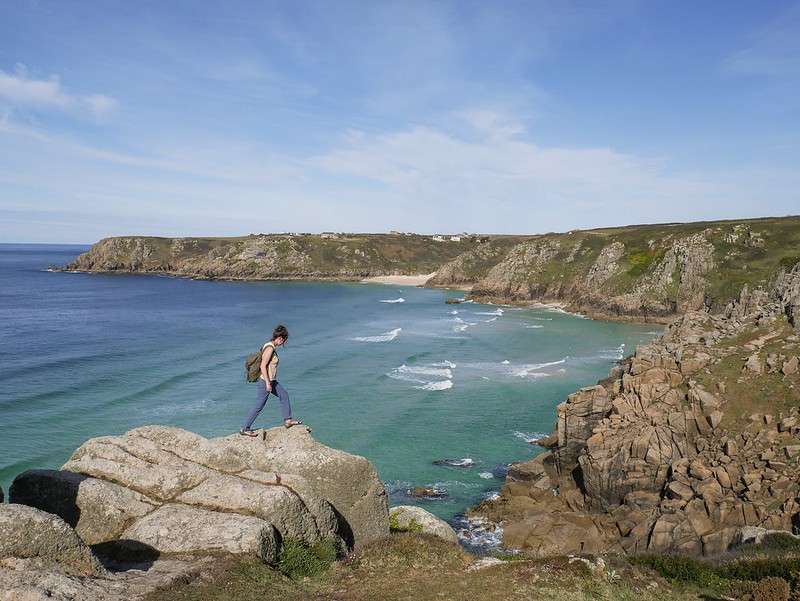 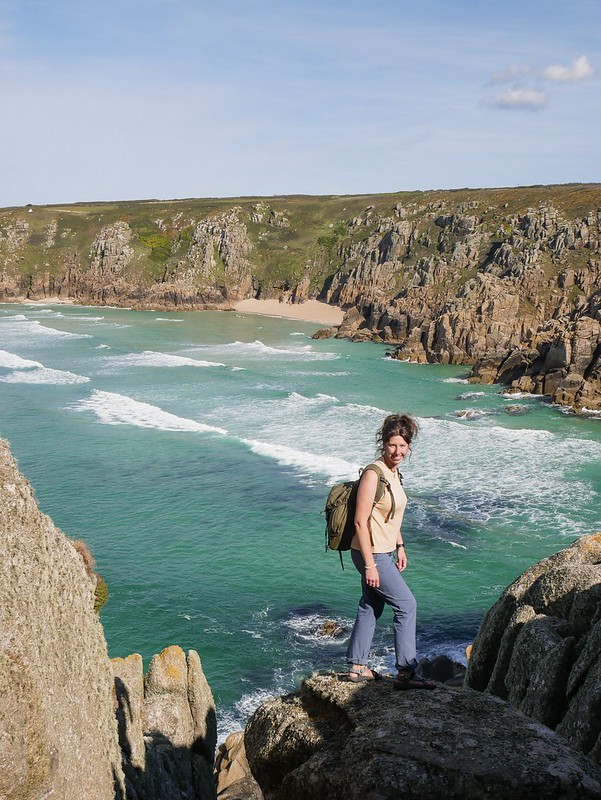 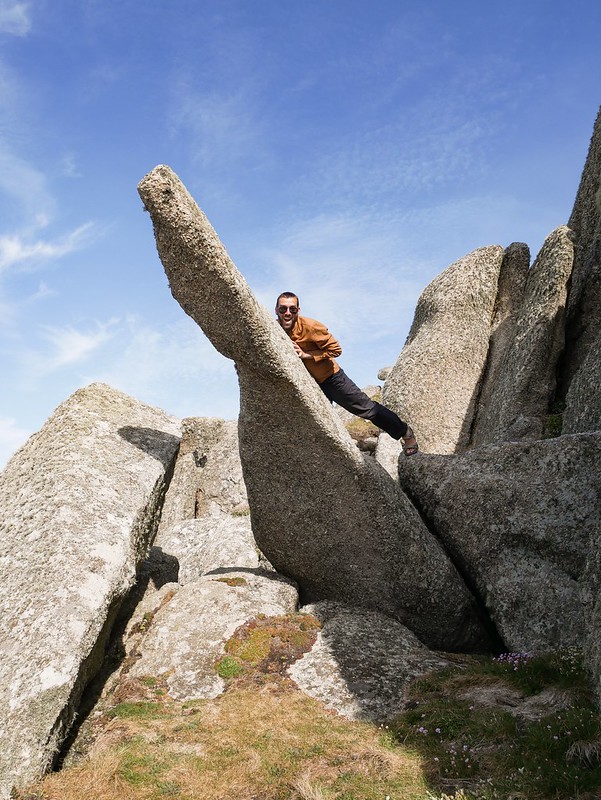 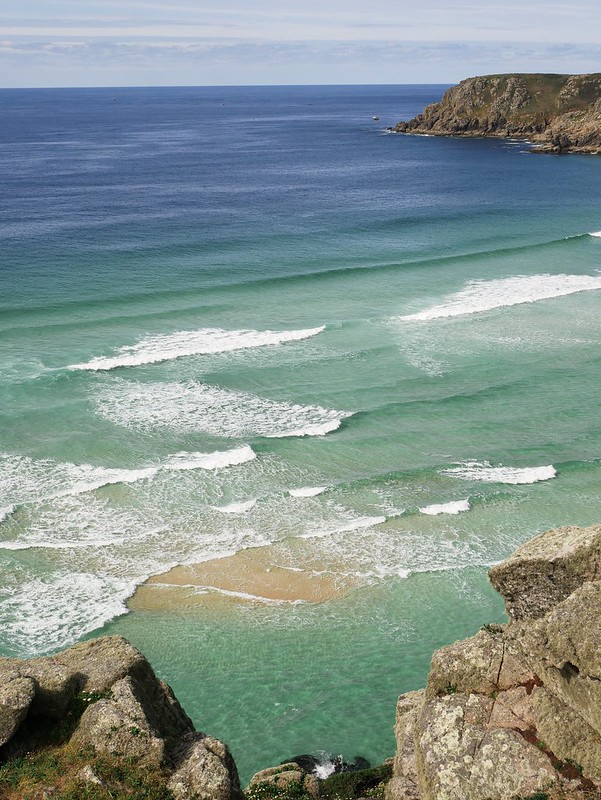 As we made our way back along the cliffs we got a few more views down to the beach. One of the sand banks was starting to appear like a little island in the turquoise sea. It was already low tide so it wasn’t going to get any better than that so we continued our hike along the coast. We walked all the way to Nanjizal Beach which was supposed to have an impressive rock arch but it was a rather anti-climatic split in a rock. 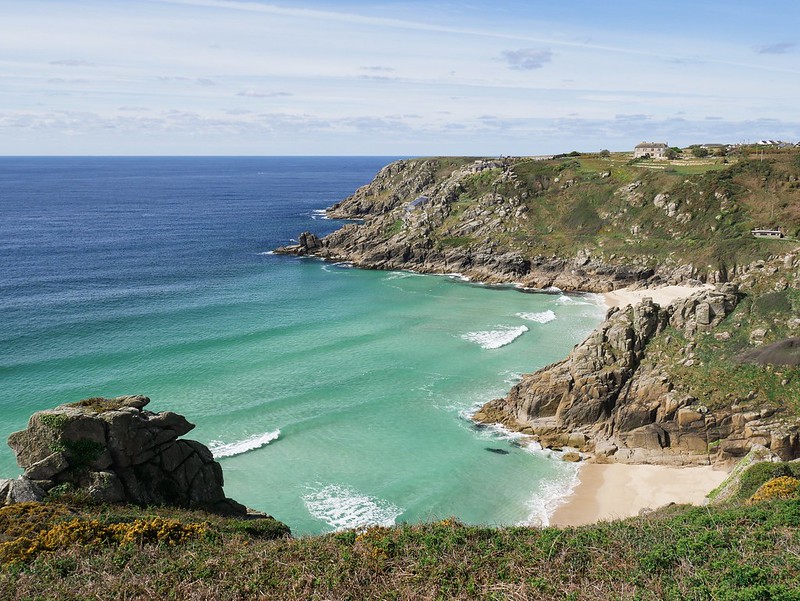 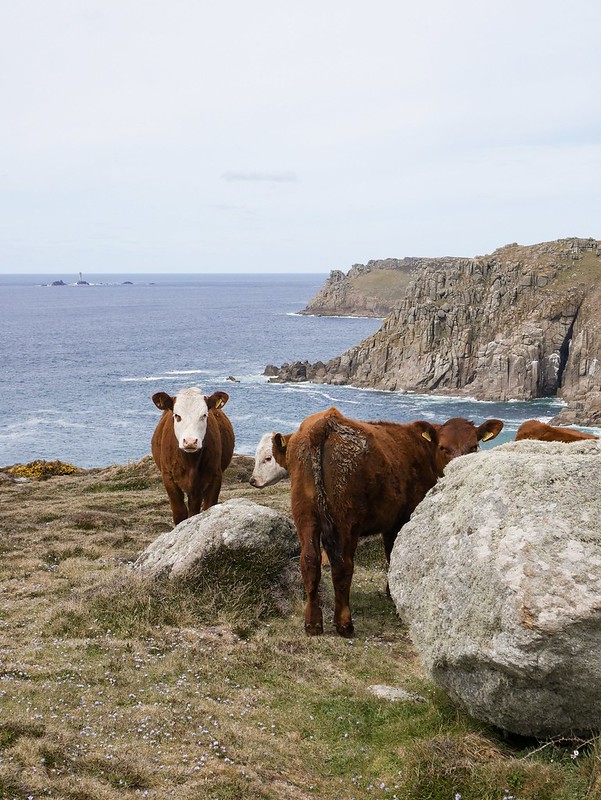 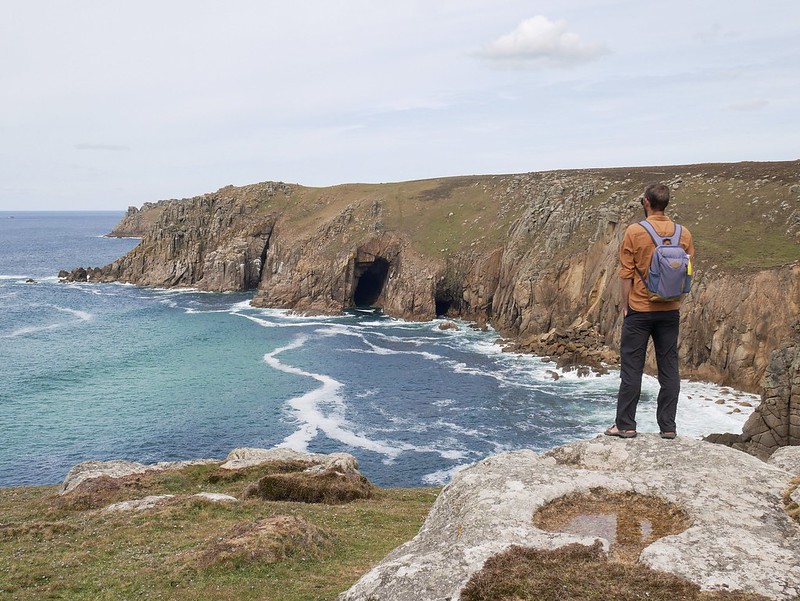 The beach was pretty though with big round boulders in the sand. We stopped for a picnic and literally as soon as we got our sandwiches out the tide seemed to chase us. So we moved back a couple of meters and within minutes we were being taunted again and we had to retreat all the way back which gave us a good view of where we had been sitting so we could gauge how much water it was already under. 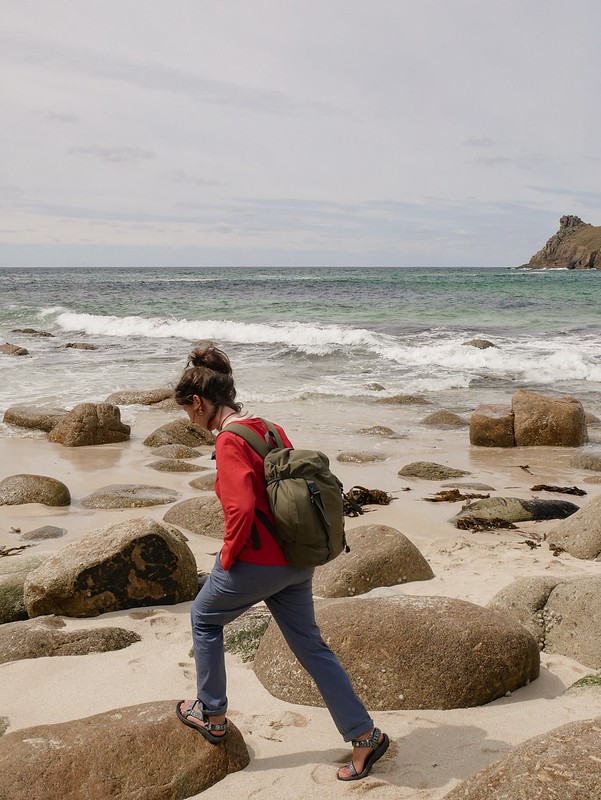 We were about 2kms walk from Lands End so we were contemplating just having a look but we couldn’t decide so we asked a couple coming from that direction if it was worth it. They said it was tacky like a theme park with shops selling overpriced goods. So we happily gave it a miss and headed back to Helga, taking a different route through the countryside. The route was extremely vague considering it was a public footpath. We followed a narrow trail between sweet corn and walked along farmers tire tracks where we had bizarre blue potatoes beneath our feet. We spotted another couple looking rather lost with their big ordnance survey map out. I must admit I felt quite smug when we found the correct route before they did.

We noticed Helga was leaking when it rained a few days before so in the afternoon we needed to take advantage of a dry spell and add more sealant to the skylight. All of that is easy when you have a home and a garage filled with things like a ladder! That’s all we needed but without one we had to search for an area of stone wall, park absurdly close to it and get Craig to climb up and reach the roof that way.

We camped in a gravel lay-by for the night and on the corner of the road was a traditional black and white sign pointing to nearby villages. Lands End was marked on the sign so we found it pretty funny taking a photo with it, 4 miles away from the actual sign that you have to pay to have a photo with. 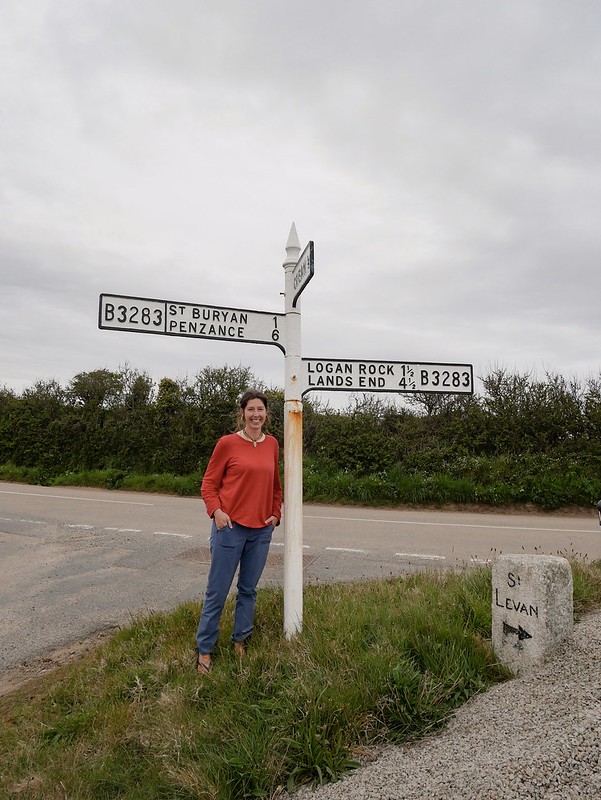 The next day we visited St Michael’s Mount which is a little tidal island with a historic castle built on it. It looks very similar to Mont St Michel in France, they both have a walkway along the sea floor to access the island at low tide. Albeit they look similar, there’s no denying the fact that the one in France is way more impressive, it’s also the original one and at some point the Benedictine abbey on Mont St Michel gained possession of this Cornish island and built a smaller version atop it. It was a very grey and drizzly day when we visited, funny enough the exact same weather we had when we went to the French version. The sea was full of kite surfers enjoying the wind and waves and doing crazy jumps in the air. We walked across to the island along the stone pathway at low tide but the entry to the island was closed so France has won yet again. 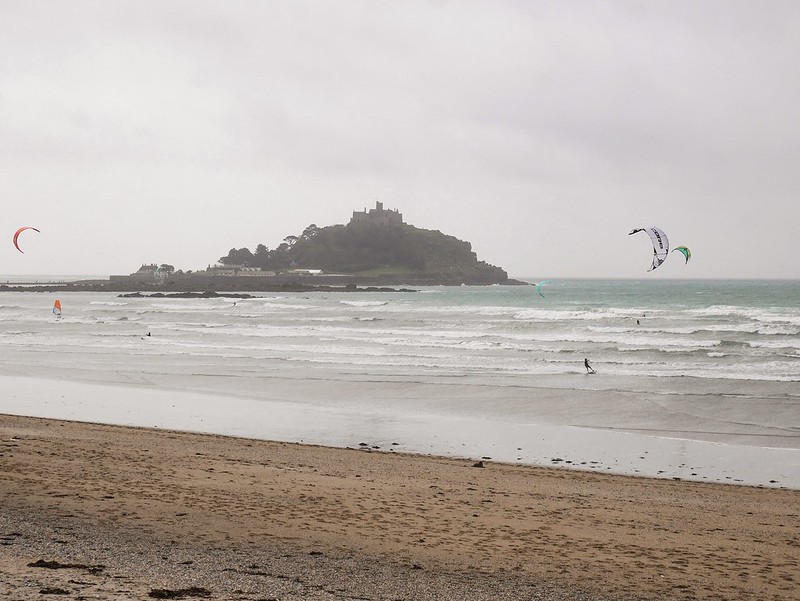 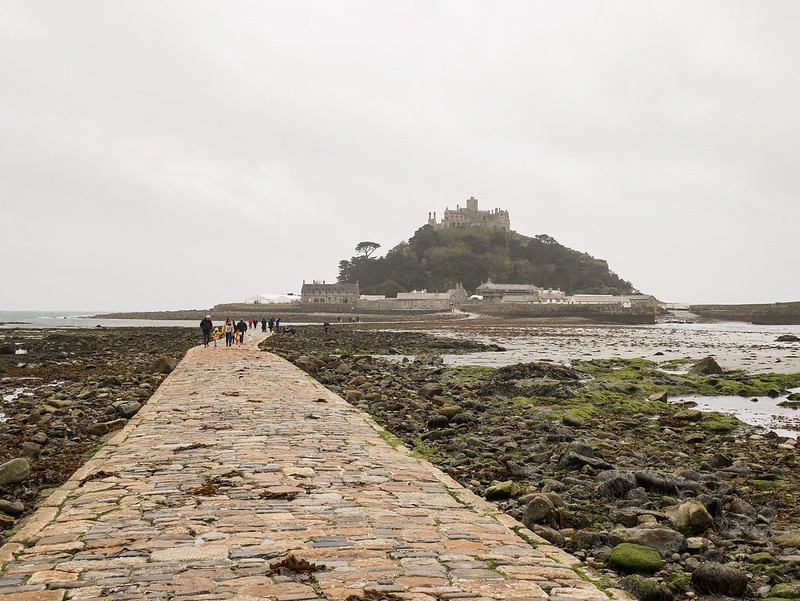 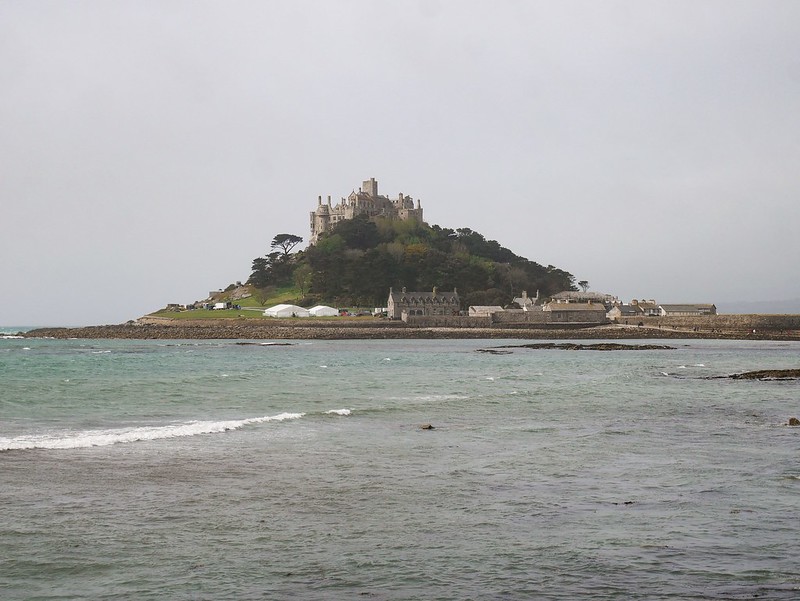