The sea was still rough and covered in white caps from the storm so we headed south to Newquay to do some chores like laundry and fill up our gas. I was surprised how basic the town was, it just looked like a normal British high street with the usual tacky shops. I guess I was expecting it to be more of a holiday or quirky vibe with independent shops. We bought a pasty from supposedly the oldest pasty making company in Cornwall. I opted for a cheese and onion one – which some may say is not a pasty as there’s no meat inside but I beg to differ. It was the size of a small child and filled with pipping hot potato’s. In fact it tasted like dauphinois potato’s wrapped in pastry. We sat on a bench and enjoyed them with a view of a very cool house built on a tall standing island which was connected to the mainland by a bridge. 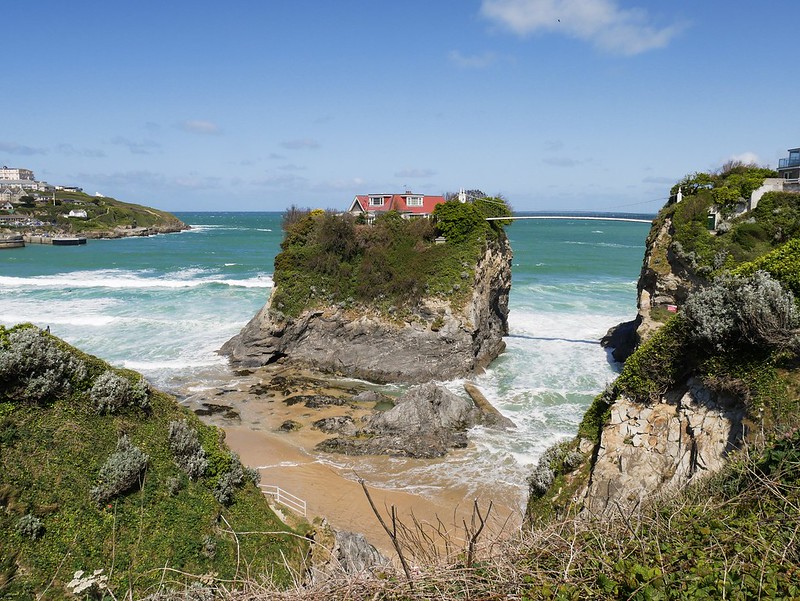 We didn’t spend long in Newquay and instead headed south to St Agnes, an area we’d never heard of before. We found a pullout to camp in with a view of the sea and at sunset we ran up the hill behind us for a better view. A storm was blowing across the sea with a big black cloud releasing a perfect beam of rain like a big spot-light and it gradually turned a dusty pink colour. 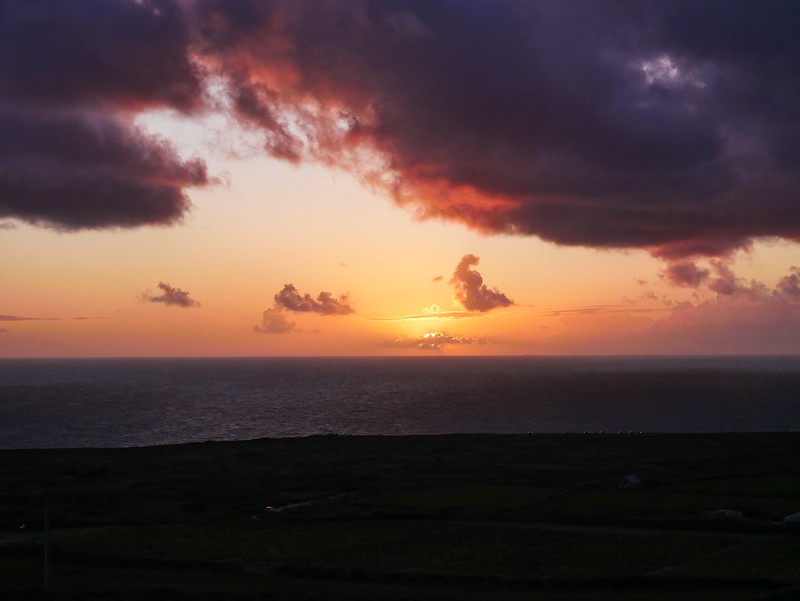 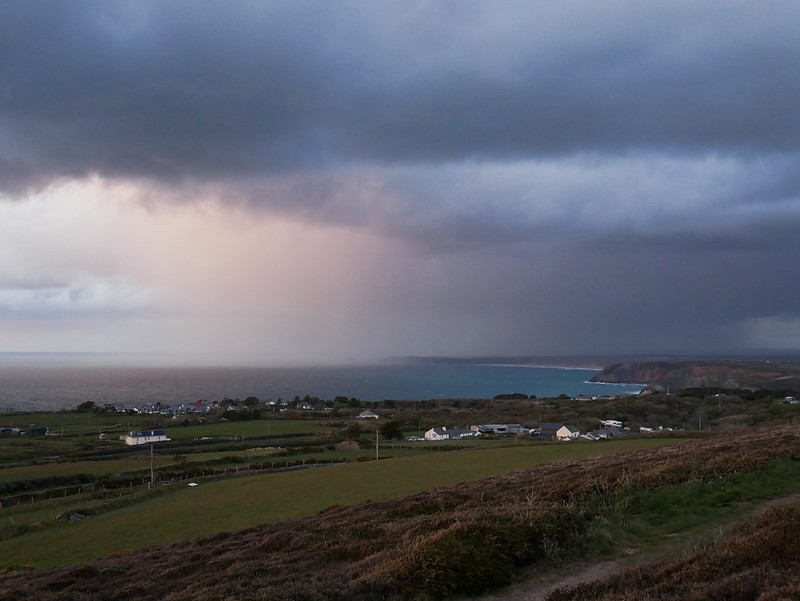 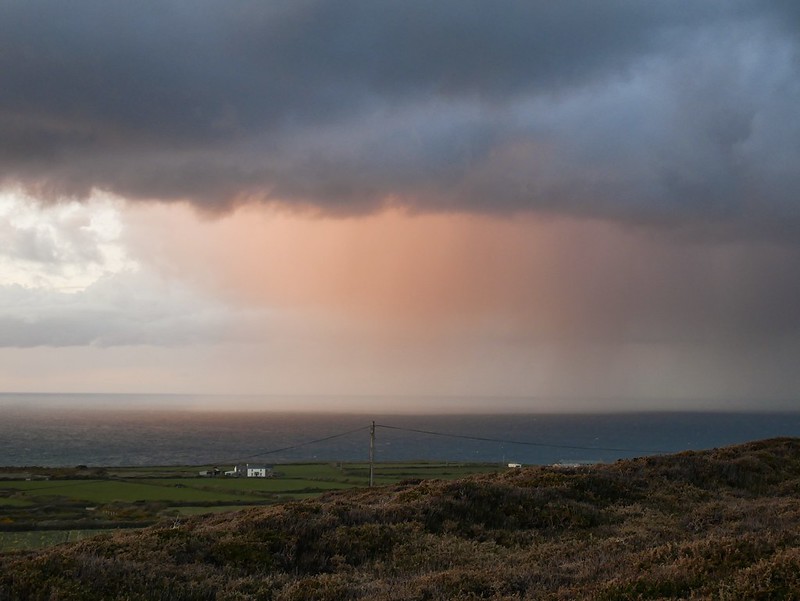 The following morning we followed a trail down to Chapel Porth. It led us via some old ruins from the copper mining days. The weather was grey and gloomy with strong winds so after a short hike we headed back to Helga and drove south. 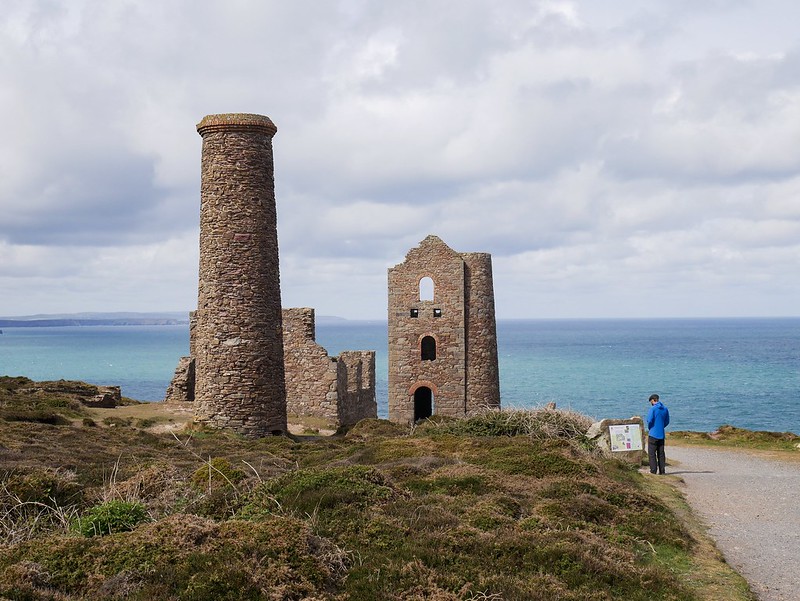 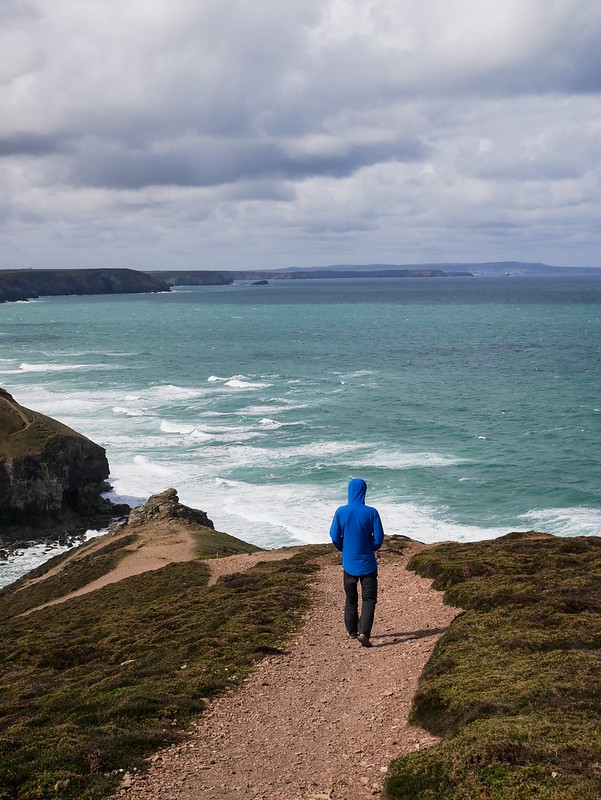 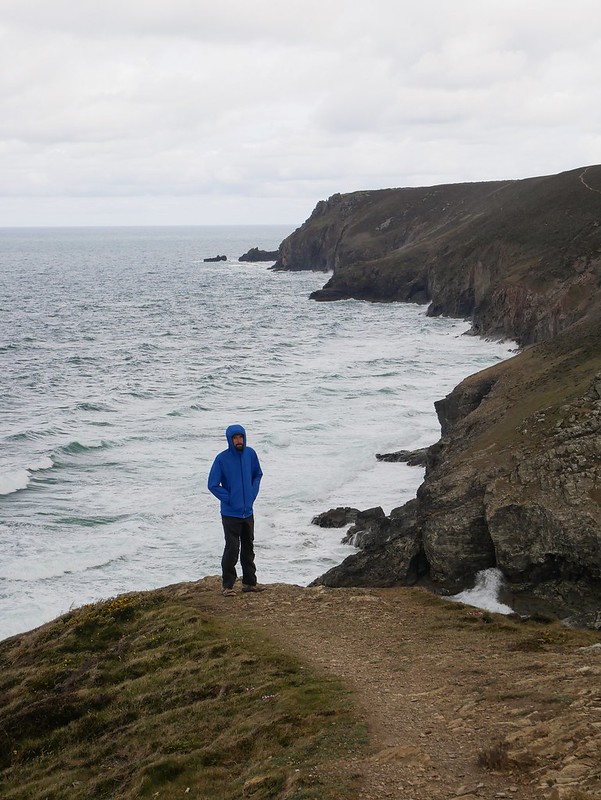 We ended up on a section of road high above the sea with lots of little carparks along the way. It looked like a perfect spot to camp so we pulled over, did another hike along the coast and then relaxed with our lovely view. Sadly just as we went to bed at 11pm we were awoken by a ranger who informed us we were on National Trust land and couldn’t camp there. He was very nice though and recommended a spot a few miles away and said “you won’t get bothered there”. So with sleepy eyes we headed off. It was obvious where he meant as about 20 other vans were pulled up along the road side – an area we would never stop to camp but alas, we didn’t have many choices now.

The locals made everyone camping feel very welcome by honking their horns throughout the night and driving past at great speed. Pricks. As if we hadn’t had a bad enough night sleep we were woken at 6am to the sound of dripping – and more honking of course. It had been raining all night and our skylight was letting water in. Euuuugh.

We got up and drove to another carpark hoping a different direction would prevent the rain dripping in and also to use the public toilets but the road to them was closed so we were so fed up with the area that we just left. Shame as it had a lovely beach for surfing but I hate bad vibes.

So we continued south to St Ives and made our way down to the pedestrianised lanes filled with shops. We couldn’t believe how much nicer it was compared to Newquay. The lane was full of independent shops selling beautiful homeware and lovely clothes. Plus they had plenty of fudge shops and pasty’s for sale in cute bakeries. We made our way down to the harbour which was buzzing with life, we were surprised how busy the town was actually. There were a few beaches surrounding the town and plenty of eateries along the waterfront. 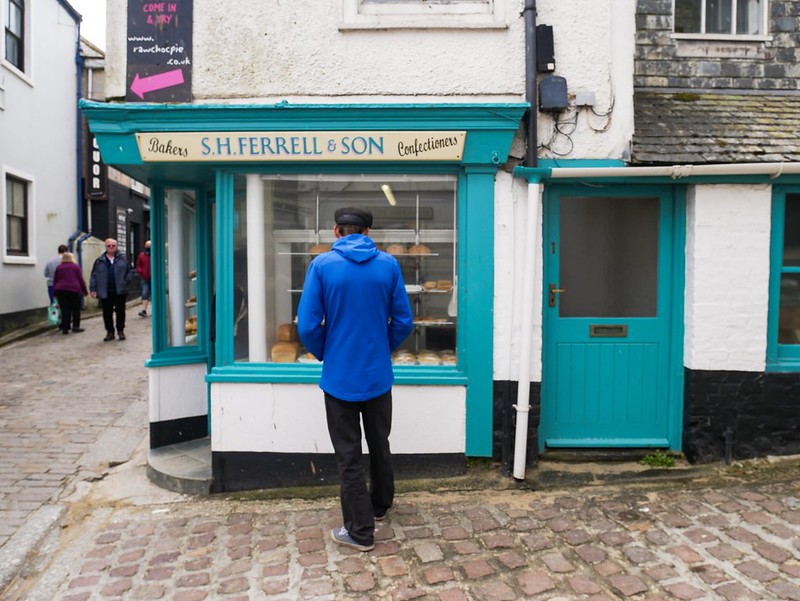 We were planning on heading back to Helga for a sandwich but decided to just grab a pasty and some sausage rolls. We sat on the edge of the harbour wall and just as we got our food out I felt someone scruff my hair up with their hand. My first thought was an old friend must have recognised me (even though I don’t have any friends in the area). Next thing I know there’s a seagull flapping its wings a few centimetres from my face and I looked at Craig in panic to try and figure out what the heck was going on. It wasn’t a human touching my head after all, it was a bloody seagull jumping onto my head and launching off for Craig’s sausage roll which was now thoroughly squished in Craig’s hand as his instinct was to grip it. Luckily he was only missing the top so without any hesitation we got up and headed back to Helga to A) escape the seagulls and B) heat our lunch up because it should be illegal to sell cold pasty’s.

As soon as we left St Ives we were driving through pristine countryside with a mix of hilly moorland and pastures separated by dry stone walls. Just beyond the pastures was the sea and we were lucky to be driving a very nice open route where we could look around and enjoy the view without the fear of meeting a car on a narrow bend.

We stopped at the tiny village of Zennor which had a handful of pretty stone buildings and a stream flowing through it. We parked up and headed off on a walk along the coast path which was surprisingly quiet and we were the only people hiking in the area, but to be fair it wasn’t the most spectacular scenery we’d seen. The path crossed a stream with little waterfalls and it was surrounded by giant leaves. Standing underneath them almost made me look like a character from ‘honey I shrunk the kids’. When we passed through a farm the owners dog spotted us and started barking. Flashbacks of aggressive dogs in Asia came to mind and we were wondering if we’d accidentally strayed off the main path and weren’t welcome in this farm. The monster ran our way and it turned out to be a tiny jack russel eager for some attention. It was bloody adorable, gently jumping up on us with its filthy paws covered in cow shit. 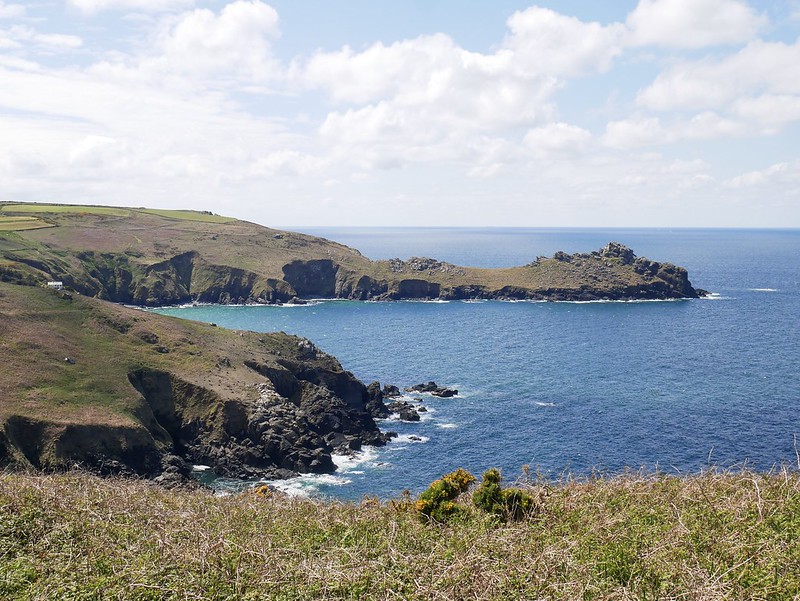 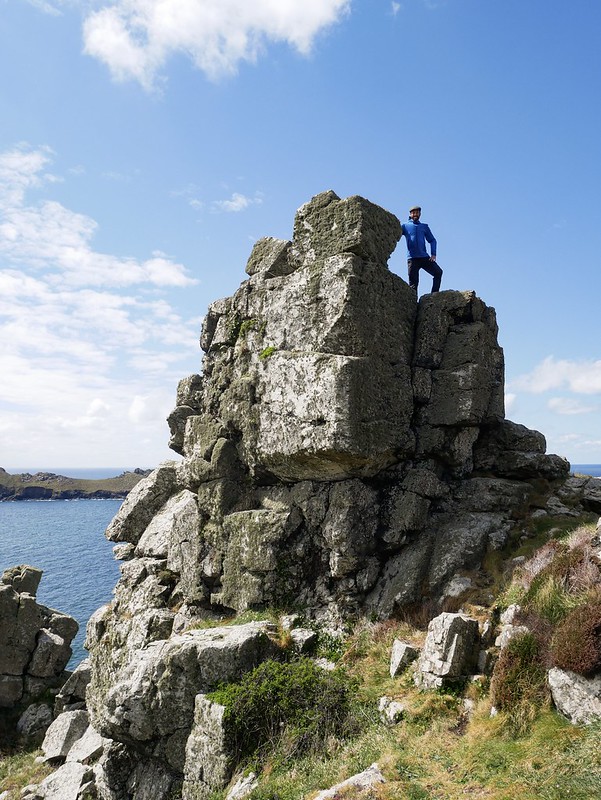 By the time we got back to the village the bloomin’ sun had come out, so we decided to make the most of it by enjoying our first cream tea in Cornwall. We had a lovely little table out on the patio where little succulent plants surrounded us in flower pots and the stream trickled just a couple meters away. The clotted cream was insanely good, almost the texture of sticky, melted marshmallows, but sadly the scone could of been better. It’s wasn’t heated up (like our bloody pasty in St Ives!) so it lost a few points for that. 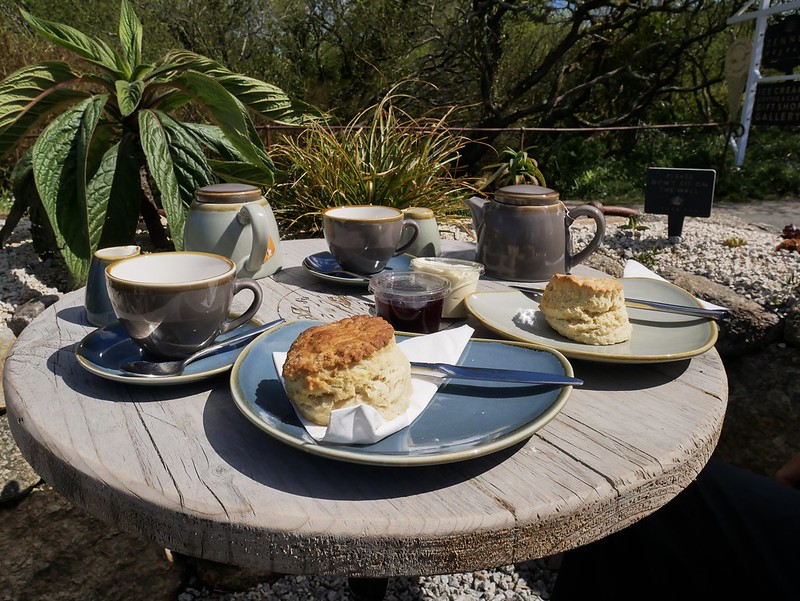 We continued our drive down to Portheras Cove which is said to be the wildest corner of Cornwall. The car park was on farmers land so we had to pay for parking which I wasn’t best pleased about in such a remote area. A trail led us down to the beach, past some cows and one rogue highland cattle. The beach felt off the beaten track and in a very tranquil area. Probably a great place to escape the crowds in summer. Swimming was strongly advised against as there’s dangerous conditions, no lifeguard and no phone signal, so instead they provided an emergency phone. In huge writing it said ‘EMERGENCY 999 ONLY’ yet the yellow phone only had three numbers on it: 1,2 and 3 which made me laugh because I can imagine me in a panic wondering where the number 9 was. 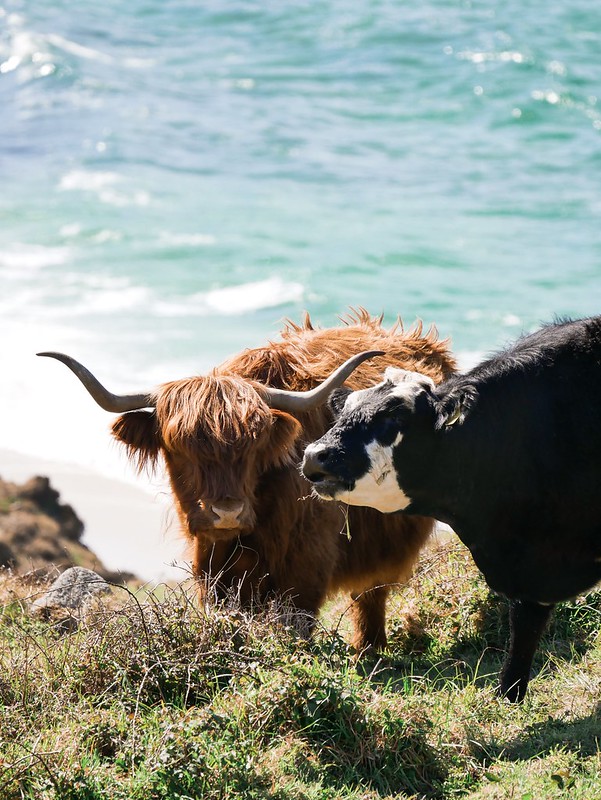 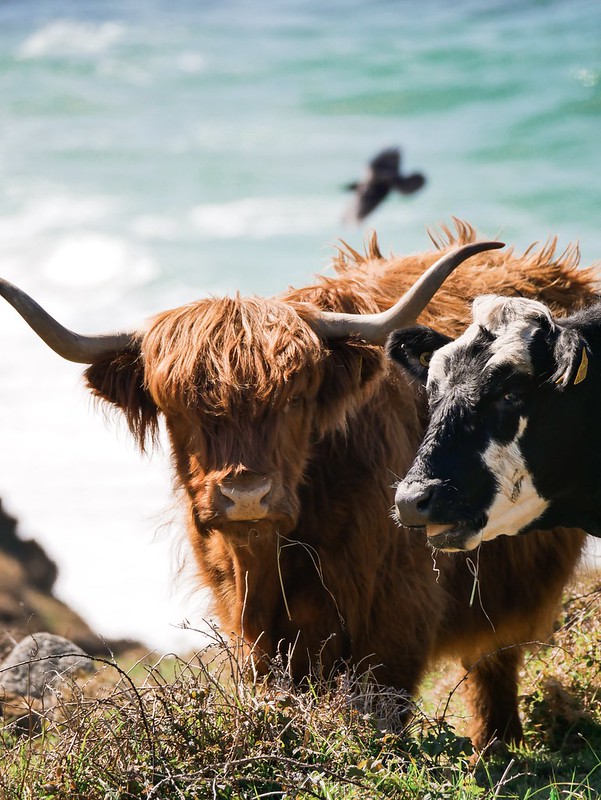 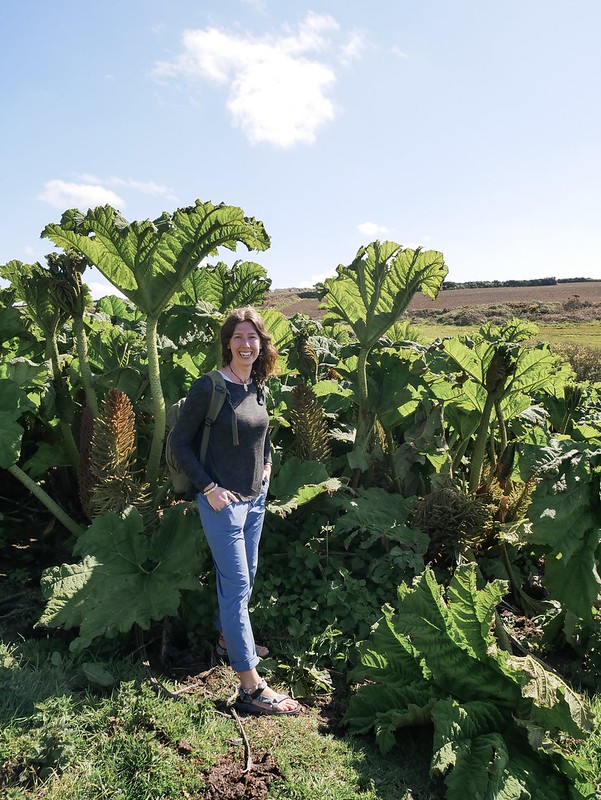 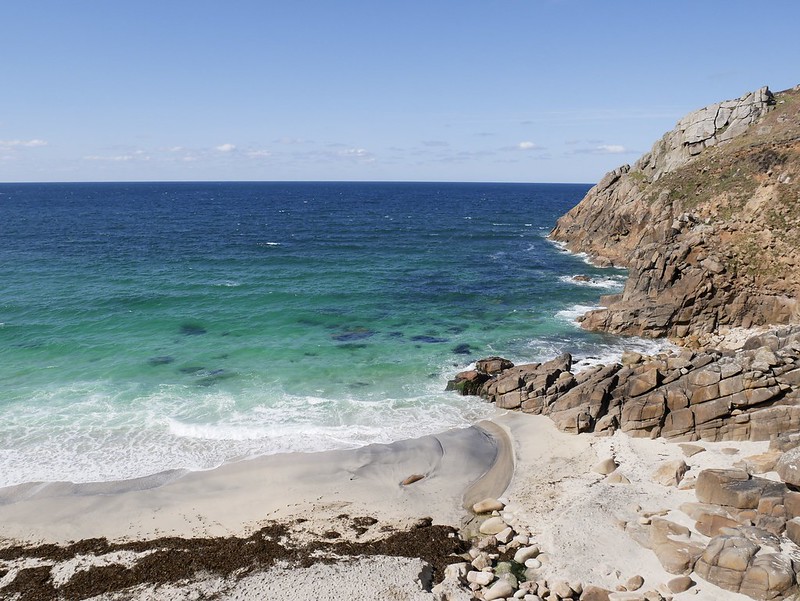 We continued along to the far end of the beach where there were rock pools and the sea was crashing into the shoreline, spraying everywhere. There was a tiny cove with a bright red fisherman’s cabin and boats lined up on the take off ramp. A sign advised people to steer clear of the old winch system as it’s still being used today to haul up boats full of fish. 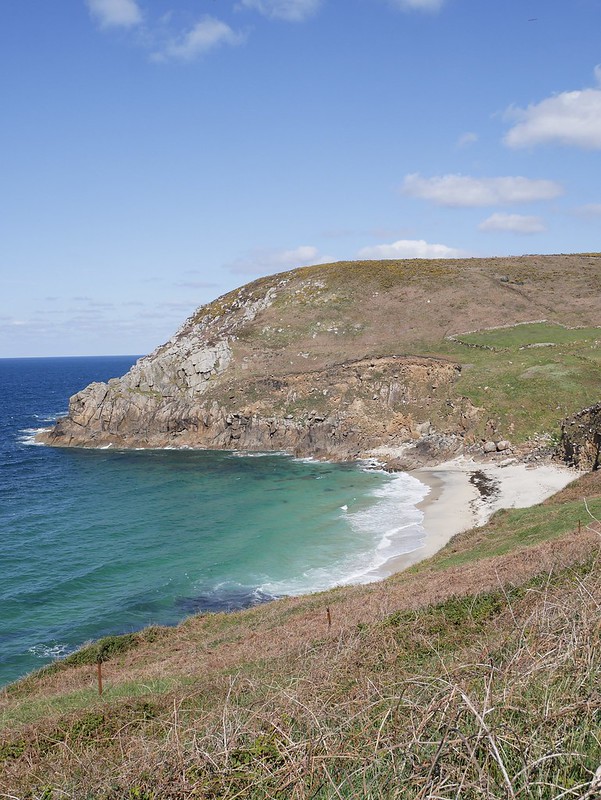 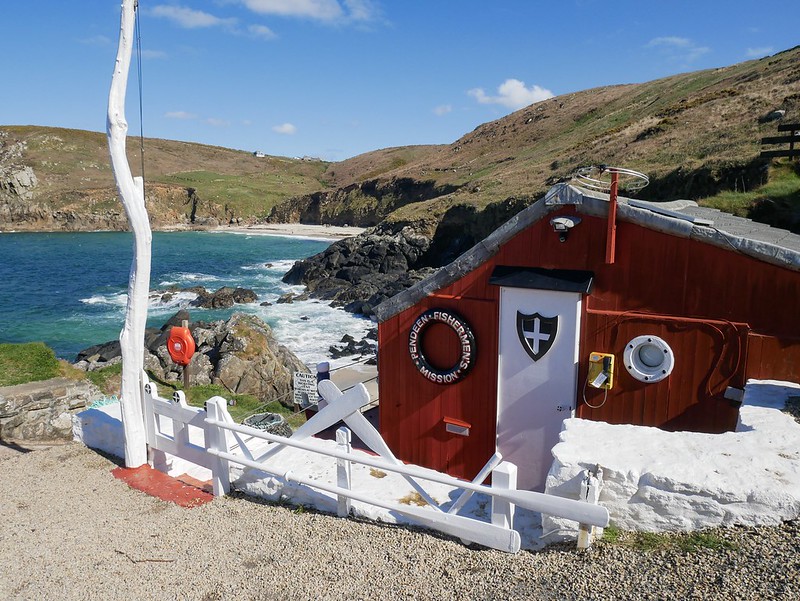 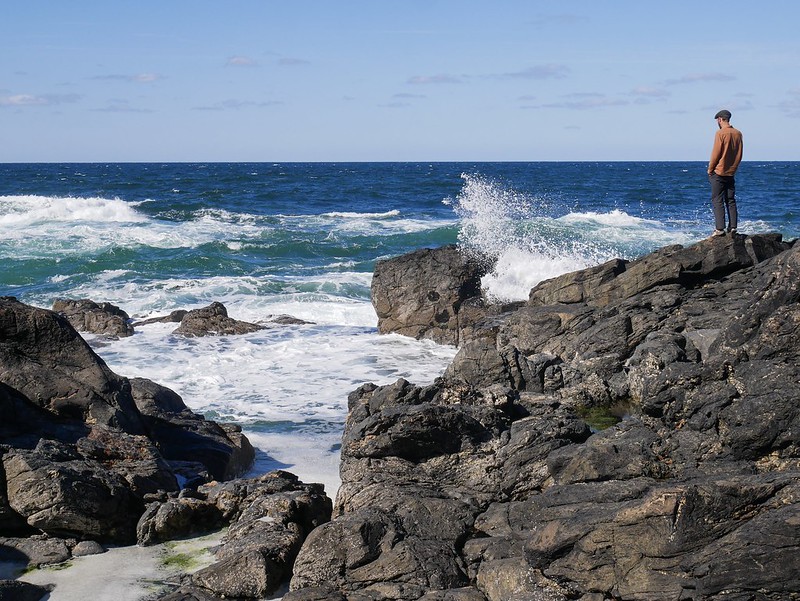 We tried to find a nice spot to free camp but the area seemed very strict. We even drove down an absurdly narrow road to what felt like the end of the world but there were even no overnight parking/camping signs there. So we ended up in a highway lay-by which was fine for the night as we had to wake early the next day to make the most of some good weather before we’re hit with yet more rain.