A nasty storm was due to hit the whole south west of England but we had two days of glorious sun before it arrived so we headed for the coast. We made an early start as it was bank holiday weekend and we wanted to try and find a free parking space. We headed towards Padstow area and managed to nab a spot in a lay-by for the day, made a pack lunch and headed off. I didn’t know much about this area but I’d seen it from google earth and it looked like there were lots of pretty beaches with turquoise water so I was excited to see what it all looked like in person.

We headed west on the coast path, high above the sea on the rolling green fields. As we passed a headland we noticed a humongous hole in the centre of the grassy field and moved closer to investigate. It wasn’t just a hole it was a MASSIVE sink hole. It was impossible to get a good photo to show the size but it was basically formed from a cave collapsing which left a giant 80ft deep hole in the ground. It was quite a chunk away from the sea, yet as we peered down we could see a mini beach and the sea sloshing in and out. 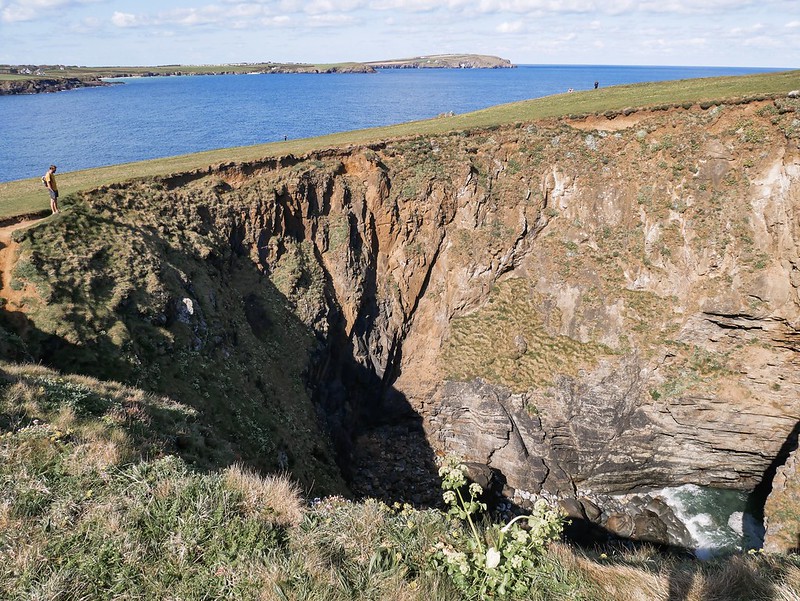 We continued down to Trevone Bay and had a view across the first beach which was beautiful. The sea was clear and turquoise and the ripples of sand were visible through the water. It was starting to get a bit busy with people setting up for the day, erecting their stripy wind-breaks for a proper British experience. 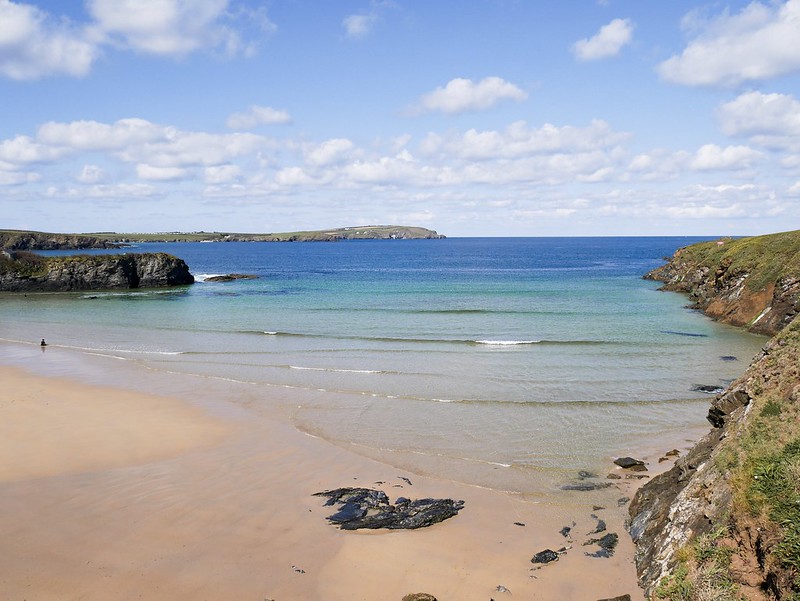 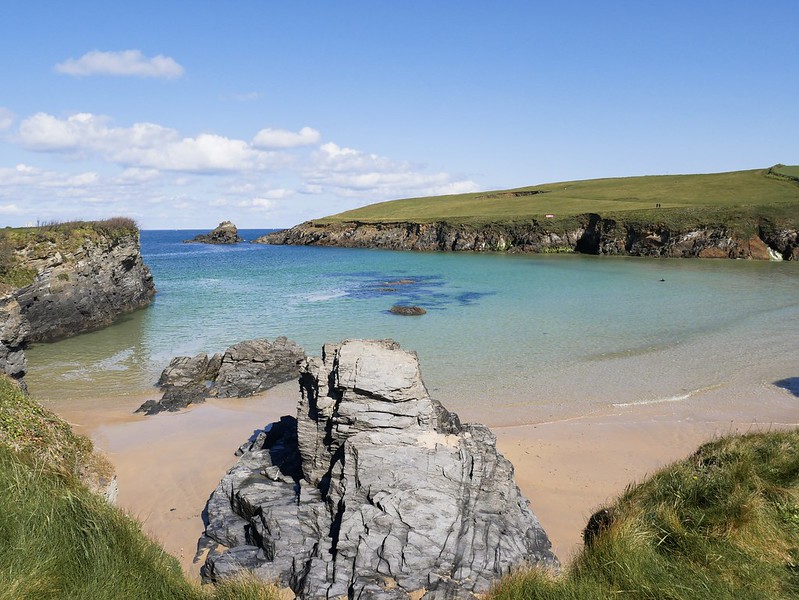 The beaches just got better and better as the day went on, I actually couldn’t believe how beautiful and tropical looking they were. The weather really helped as it wouldn’t look half as good on a cloudy or windy day, but today I felt like we were island hopping in the Caribbean. There were so many tiny beaches tucked away in little rocky coves, it really was paradise. 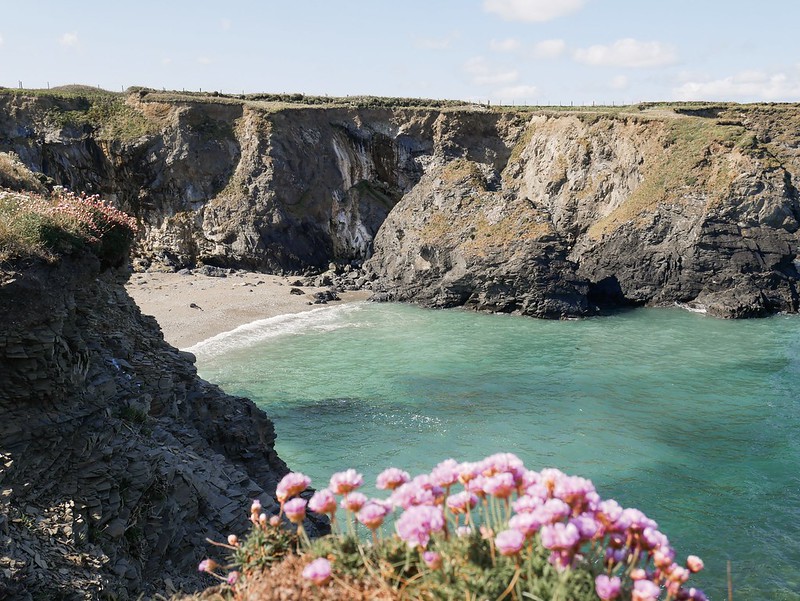 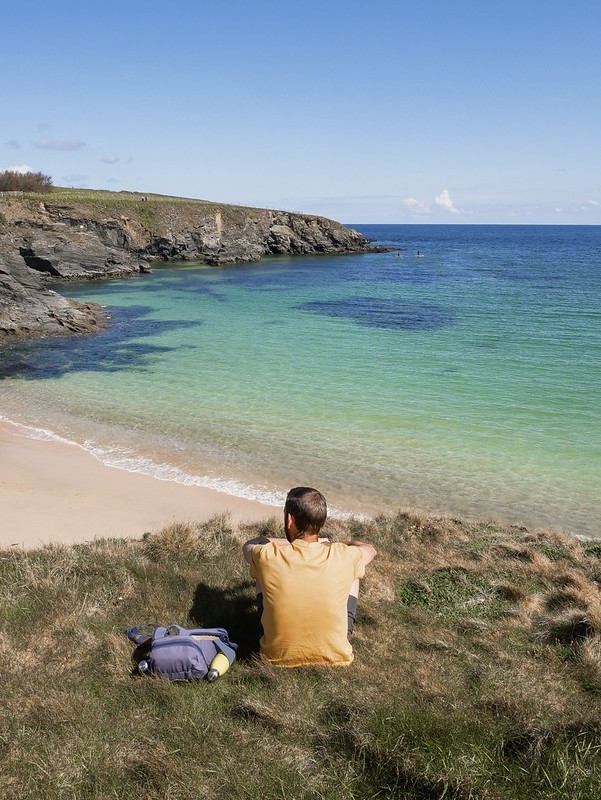 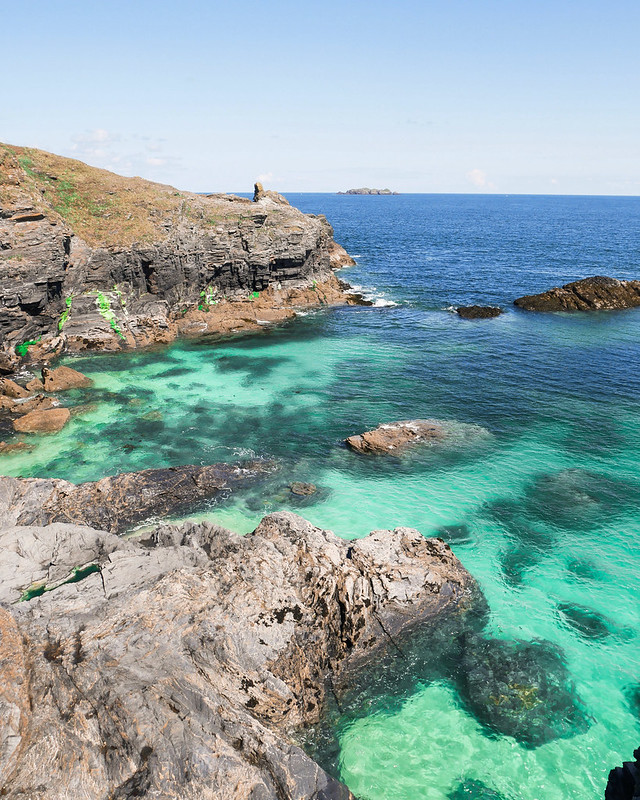 Albeit the sun was shining there was a bit of a chill to the gentle breeze which meant even stopping for lunch on a sandy beach was a tad cold. 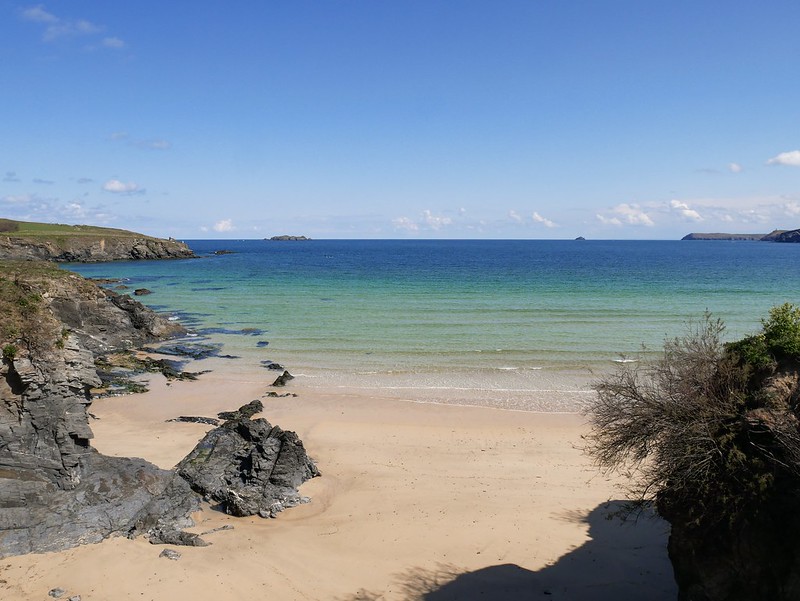 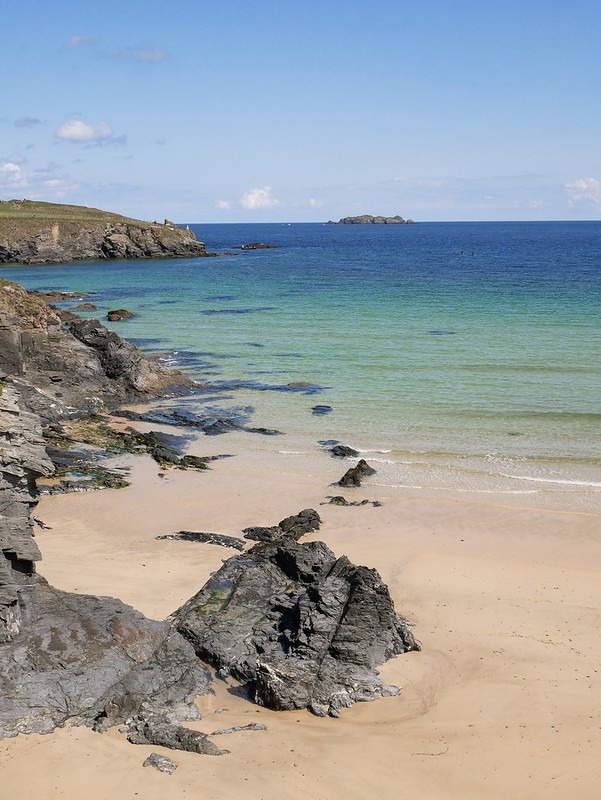 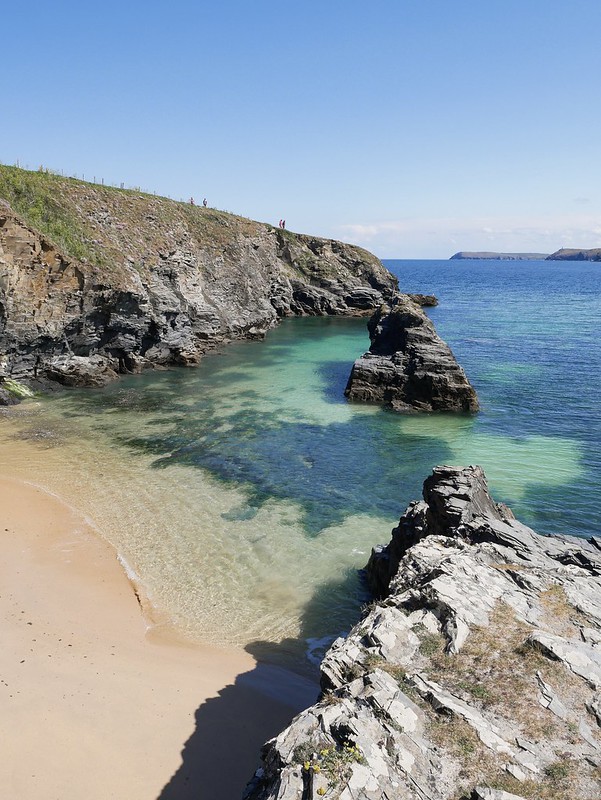 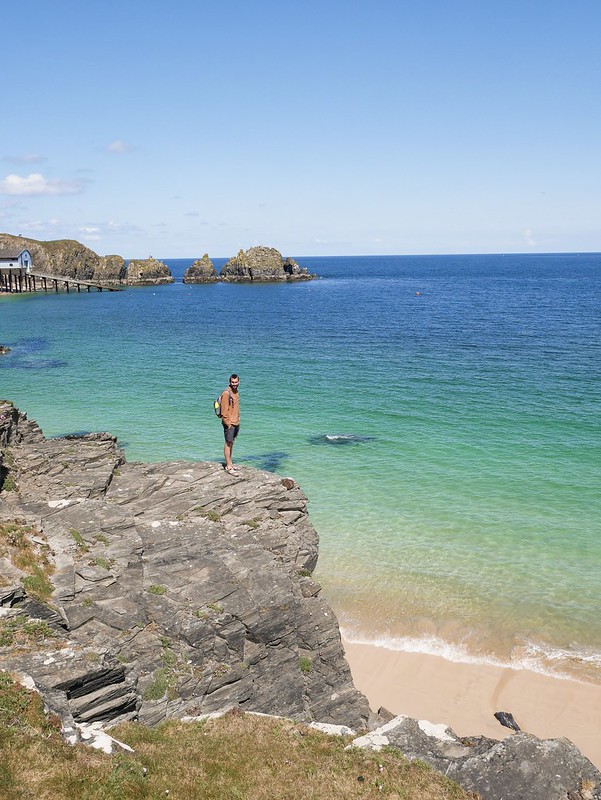 After about 7km we reached Mother Ivey’s Beach, another jaw dropping one and from there we decided to cut across the headland and see what the beaches looked like on the western coast. We arrived on Booby and Constantine Bay which looked totally different, the wind was stronger on this side and there were rolling waves. There were lots of rock pools to explore but it seemed much busier on this side of the coast, maybe it’s just because it was later in the day. 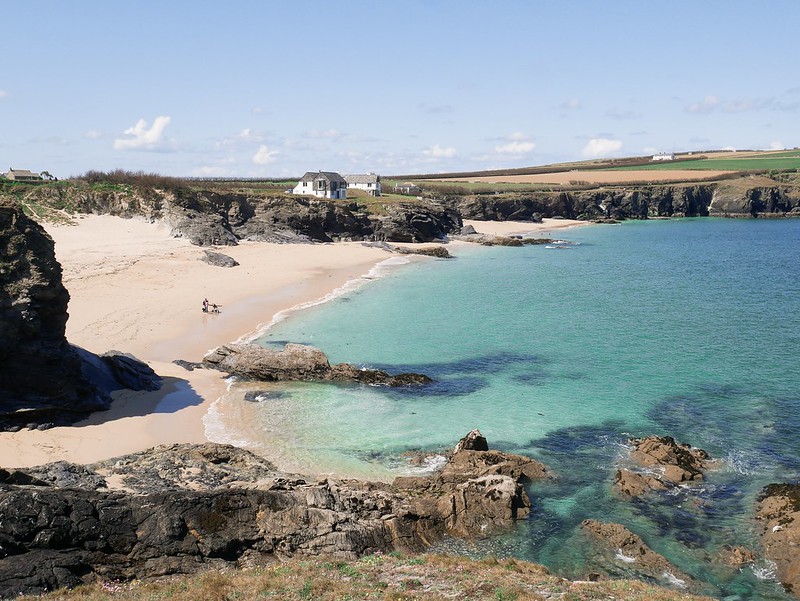 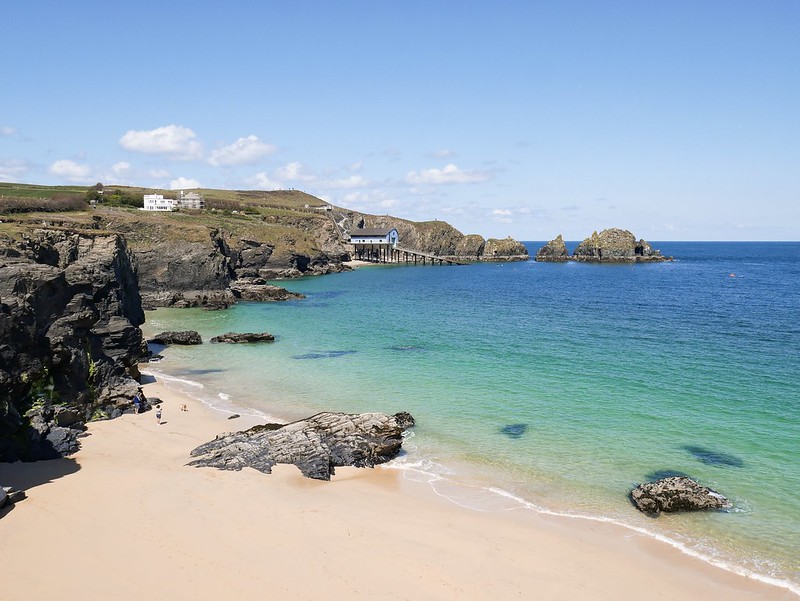 As we arrived at Treyarnon Beach we realised we were getting pretty tired and had a hell of a long walk back so we called it a day. We cut through the country lanes and then joined back onto the coast path where the tide was now totally out and rocks were protruding out of the sand. We ended up hiking 17km over 6 hours and were pretty shattered when we got back but so happy we opted to come to the coast today and see this area in perfect weather. 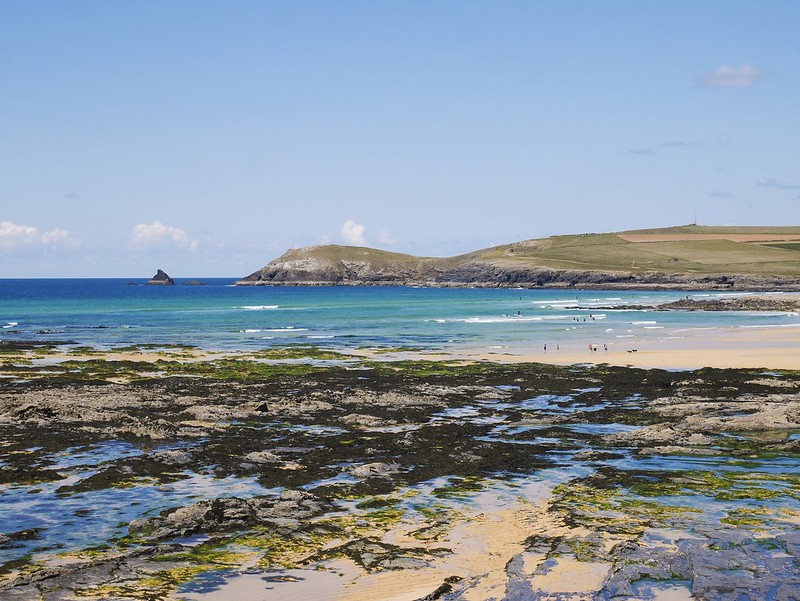 The following day started off a little overcast and windy but we headed back to the west coast to continue where we stopped hiking the day before. It was high tide when we arrived and actually not a very good time to see the area as the sandy beaches were all hidden under the sea. The main goal of the hike was to visit the popular Bedruthan Beach where unusual rock formations shoot out the sand. But at high tide they just looked like quite nondescript islands and the steps leading down had been damaged so were closed off and we couldn’t even access the beach. 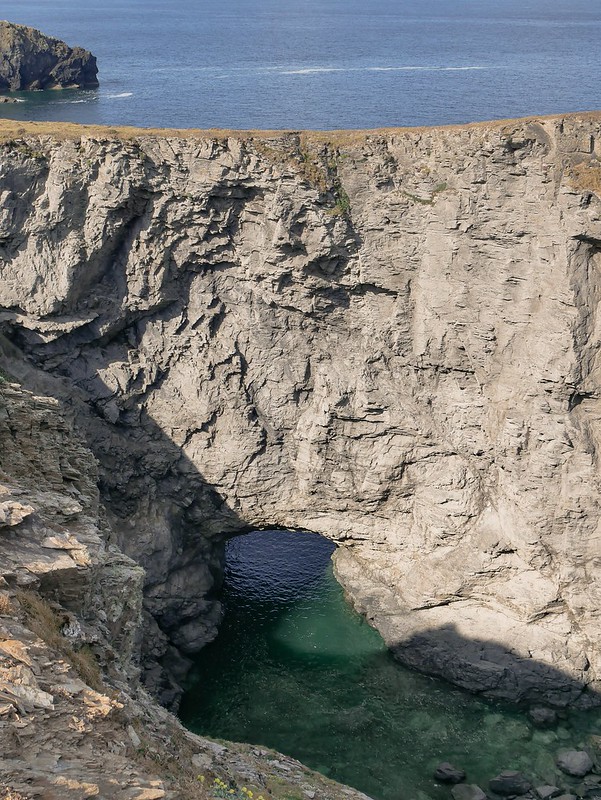 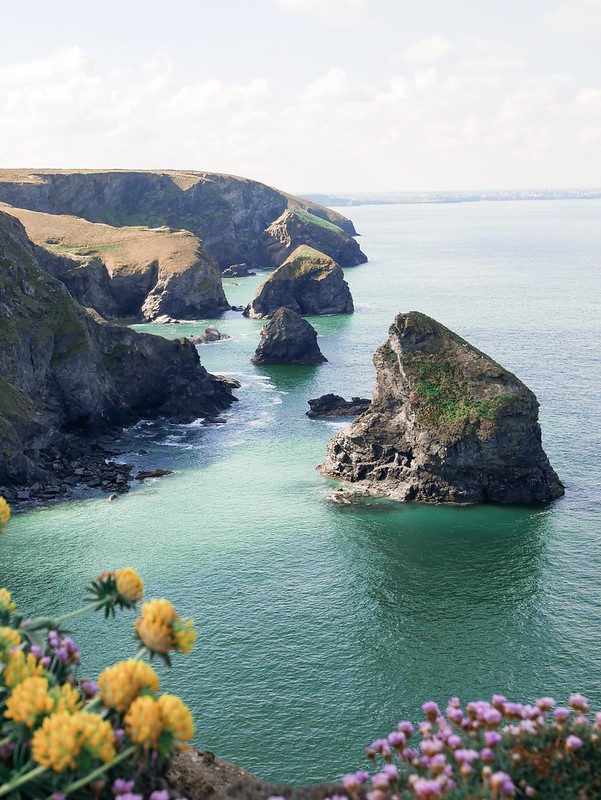 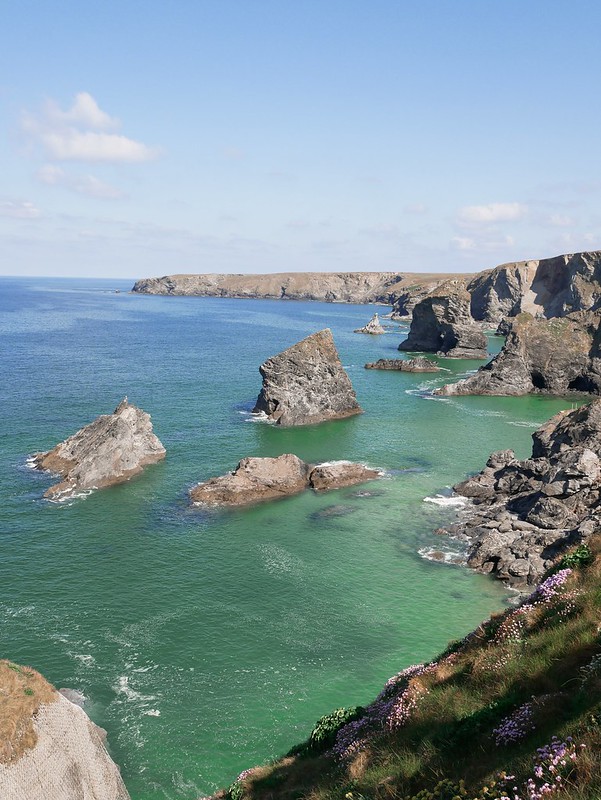 Luckily the sun was starting to come out on our way back and the tide was going out so a few more tropical looking beaches started appearing. There were beautiful wildflowers covering the ground and sheer cliffs dropping down to the sea. As we went through a narrow section we moved to the side for four people who were busy talking and made absolutely no effort to move over…and because of them I managed to kick a sharp tree stump on the ground and rip my baby toe pretty badly. It was bleeding straight away and I declared to Craig that it was so painful it must be broken while muttering swear words about the c**ts who didn’t move over. Luckily it wasn’t broken but it was an extremely painful walk back to the van. 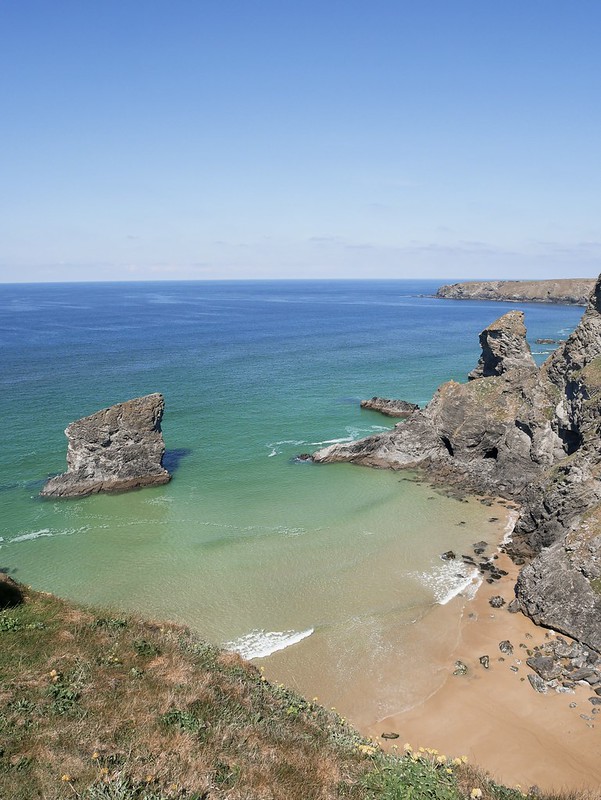 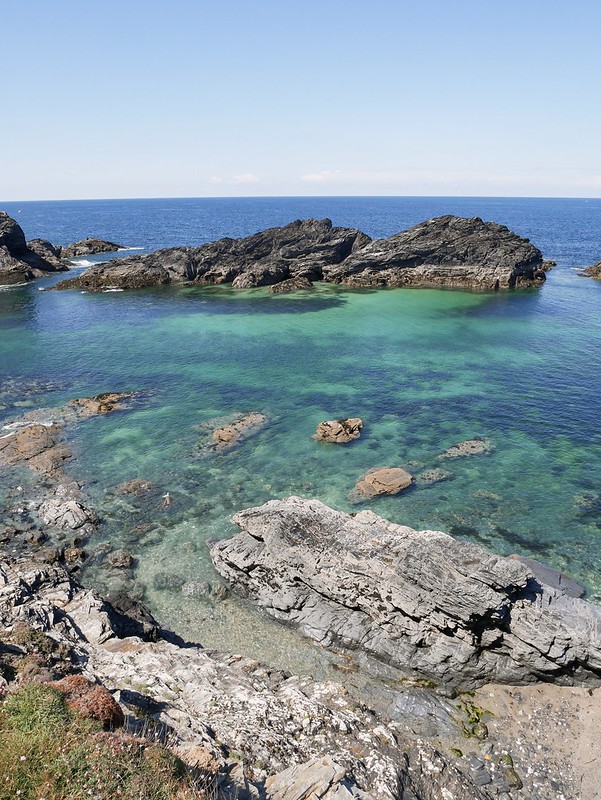 We were shocked to see how much the tide had gone out at Porthcothan beach where we parked. It looked totally different and you had to walk about 400m to reach the sea – which would be a bit of a chore with a heavy surfboard under your arm.

Later that afternoon we returned to Bedruthan Beach to witness it at low tide and it was so much more impressive. In fact the whole coastline looked better and the sun was shining so I’m glad we made the effort to return. We managed to sleep in a lay-by and got chatting to a really friendly Italian couple with an adorable dog who kept grabbing my arm with his paws. 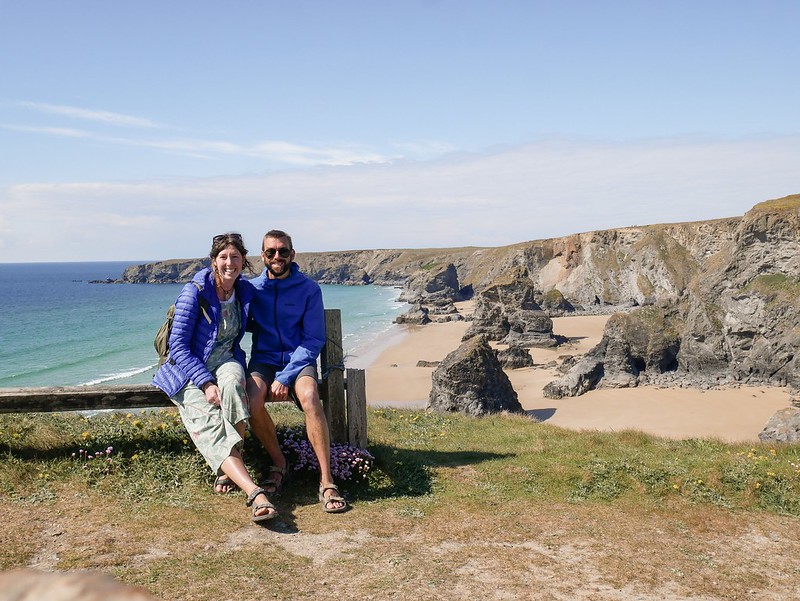 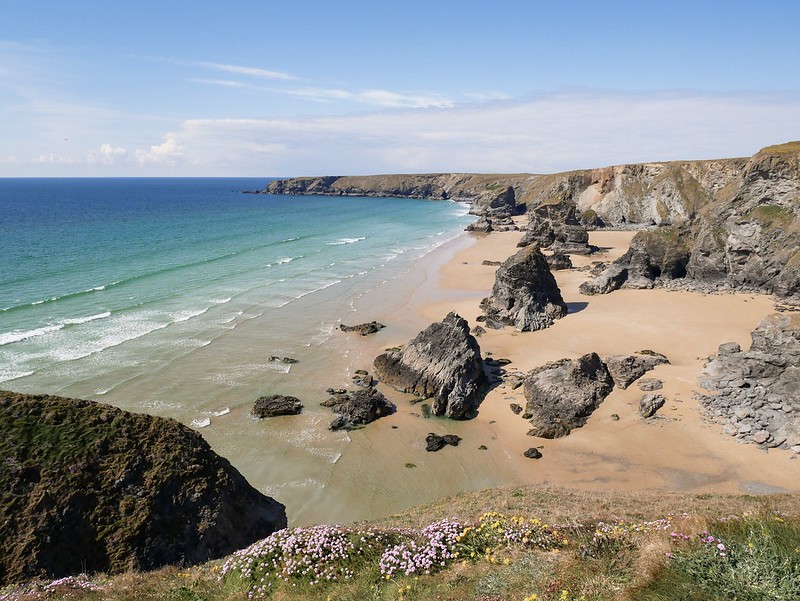 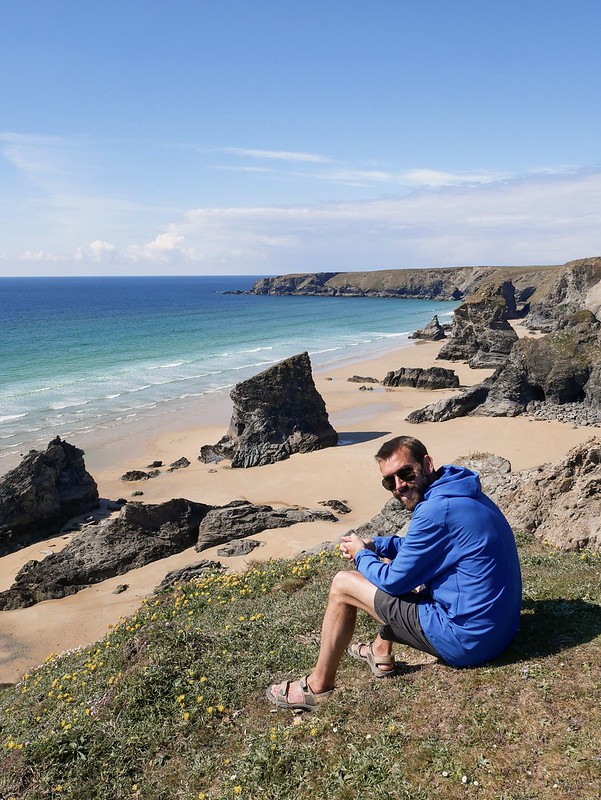 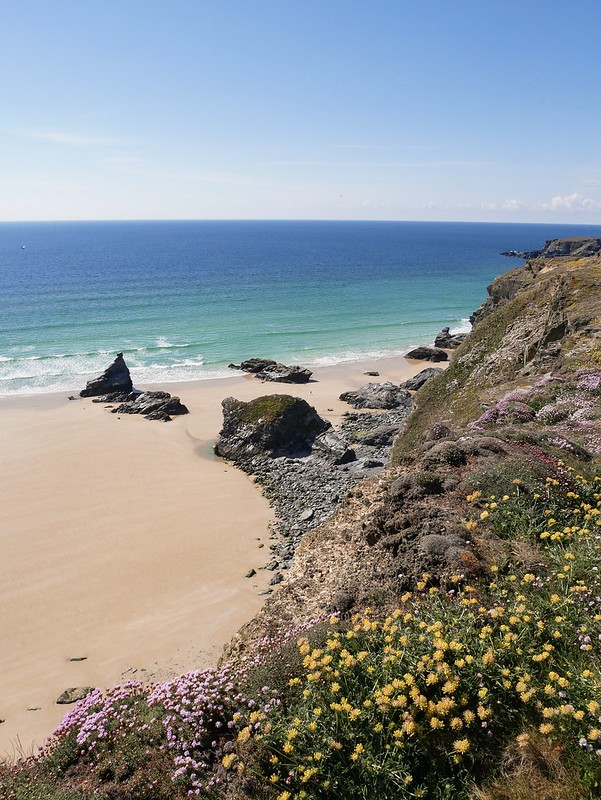 We woke the next morning to the van shaking, it wasn’t too bad yet but the storm was on it’s way so we headed south to a carpark which seemed fairly protected. It wasn’t raining yet so we went out for a little exhilarating coastal hike which was a lot of fun as we were getting blown around like tumbleweeds in a tornado. The gale force winds were due to be about 50-60mph so we didn’t spend too long on the coast.

It still wasn’t raining by lunch time so we made an impromptu decision to hike to the tiny village of St Mawgan in Pydar and buy our first pasty. It was a very blustery walk until we went through a protected wooded section filled with bluebells and wild garlic. Sadly they only had meat ones so I was left feeling rather hungry and made Craig eat and walk at great speed to get back to Helga so I could eat.

The rest of the day involved the van rocking from side to side which felt like plane turbulence, heavy rain belting down and a few leaks inside Helga. After dinner the rain stopped and we noticed the clouds starting to part. We’ve experienced quite a few stormy sunsets and know they can be phenomenal so we wasted no time running to the beach. 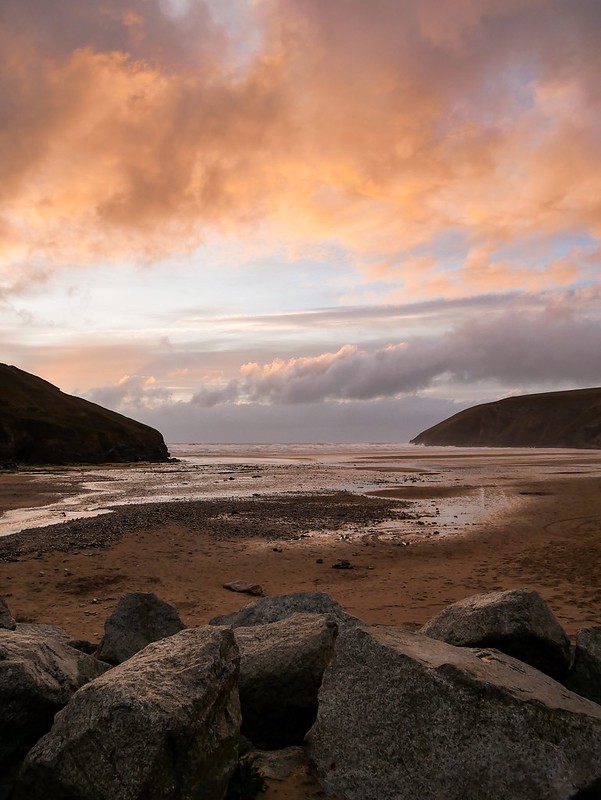 It was a spectacular scene, the photos don’t do it justice as it was so pretty in real life with a sea mist glowing and big pink clouds. Sea foam was spraying across the beach and big waves crashed into the sand. We decided to run back up the coast path and get a better vantage point. The sky was filled with pink and purple clouds and the sea was wild, absolutely covered in white caps! The wind was so strong we could lean forward and not fall over which we had a lot of fun experimenting with. We were giggling and screaming like absolute hooligans as we were the only people around and clearly got a bit of an adrenaline rush from the gale force winds. Somehow we turned the miserable storm into a positive experience. 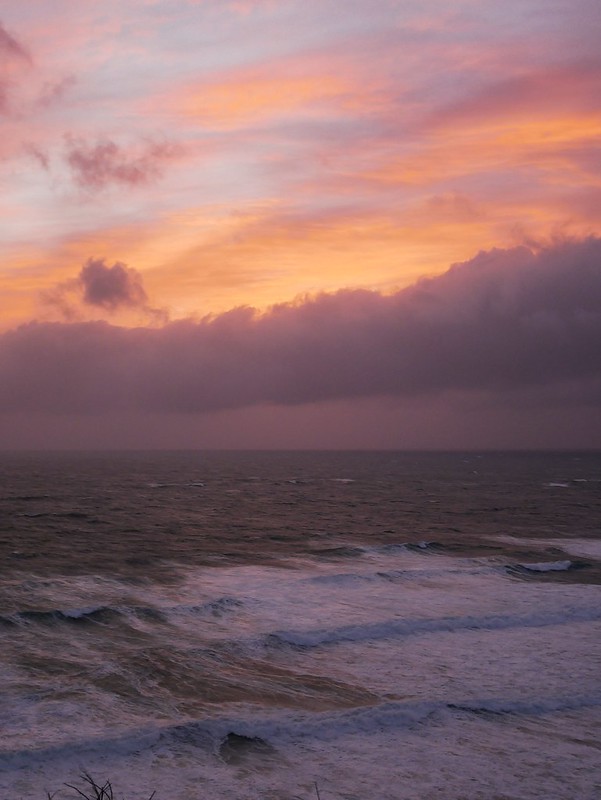 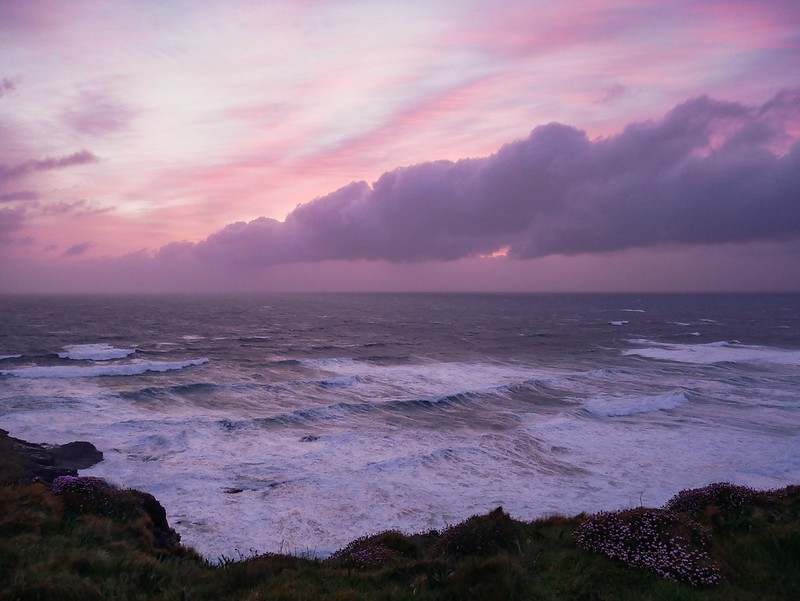 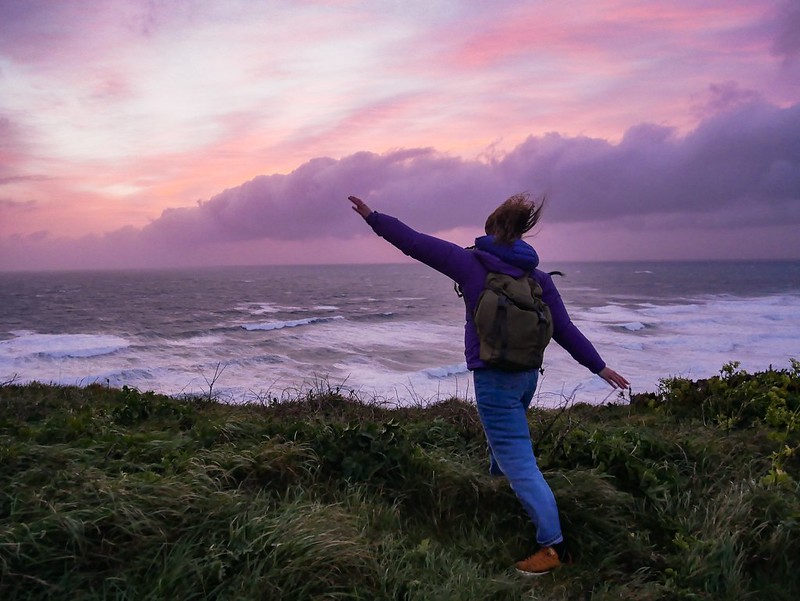 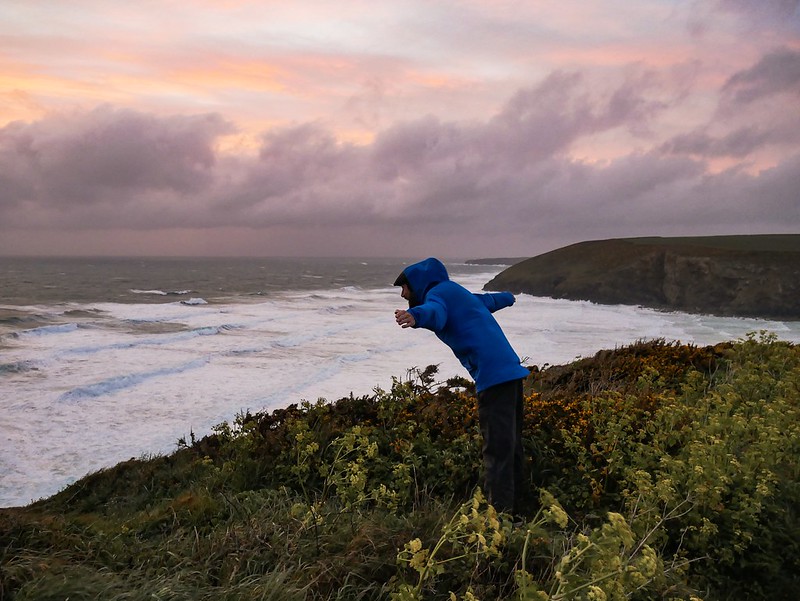