Clovelly is a harbour village on the north coast of Devon which has been privately owned by the Hamlyn family since 1738. The family rents out the houses to normal folk, giving a thorough interview beforehand to check their suited to the community. They also charge visitors £8 to park and enter the village! It’s like a very elite housing estate which you have to pay to enter and if you want to live there you can’t buy property, you can only rent. We decided to heck with paying, we’ll walk 16km instead and enter for free via the coast path.

The start of the hike was enjoyable, passing woodland with a blanket of bluebells covering the floor. Then we walked through some farmers fields filled with sheep and lamb who seemed to be in a very playful mood. Instead of staying by their mums side, about 20 of them were grouped together like a pack of thugs. They were so funny to watch, all sneaking under a gap in the fence and then chickening out and running back into the field. 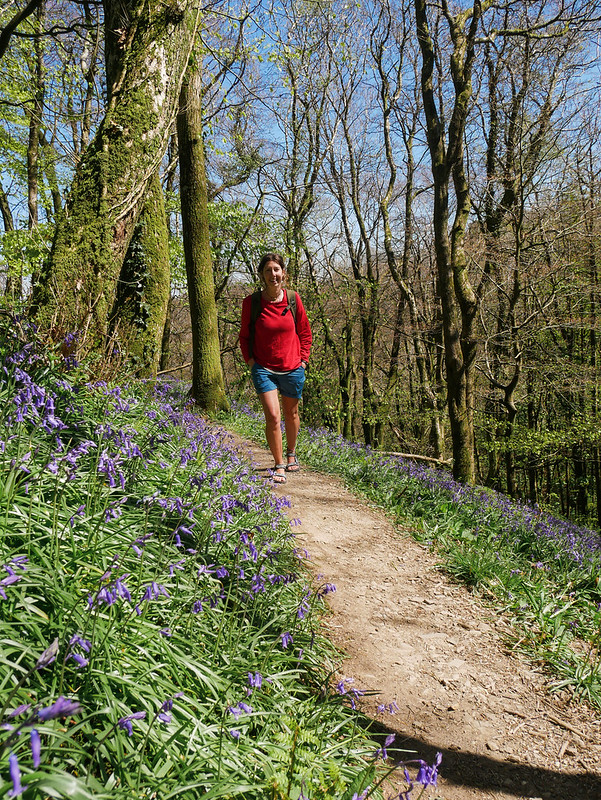 The next chunk of the path was along a wide gravel road which had some distant sea views. It was a bit of a shit section of the hike and seemed to drag on forever, especially as the trail kept winding it’s way into the valley around streams. Finally we arrived at Clovelly and were excited to see what all the fuss was about. The road in was all cobbled and sleighs were parked up at the top of the village. There’s no car access so the locals have to use these sleighs to bring food down and rubbish back up. 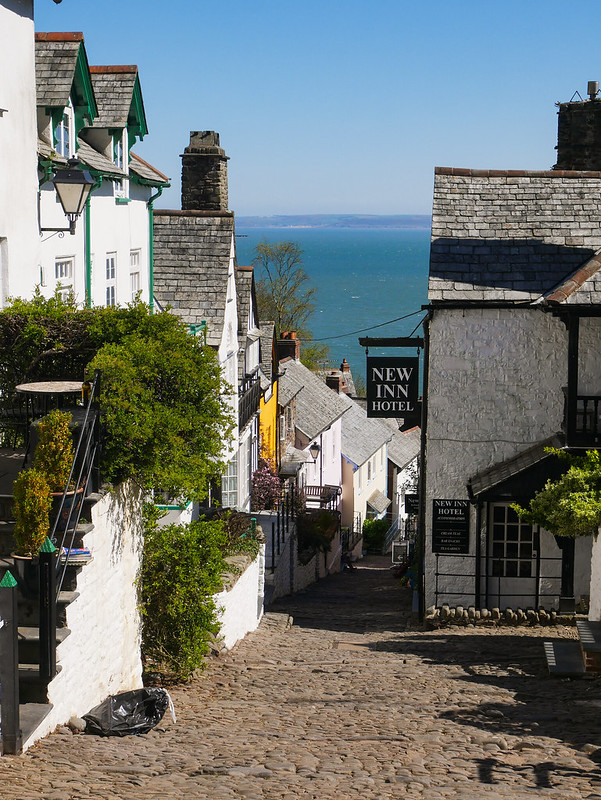 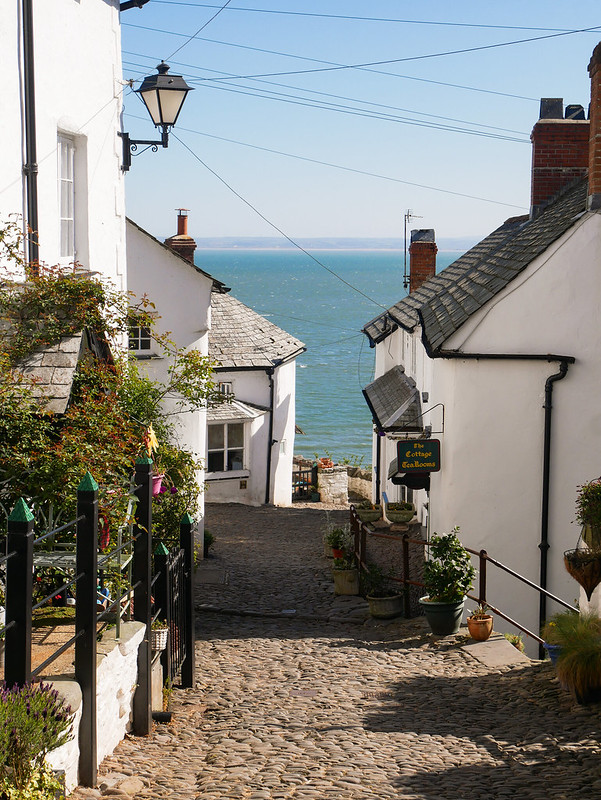 We arrived by about 10am so it was still very quiet and we could easily get photos without anyone else in them – but it wasn’t as photogenic as I expected. I guess the £8 price tag set my expectations too high, but it was a pretty village with a lovely view down to the sea. The houses were all white with black detailing and slate roofs, bar a couple of houses who went off piste and painted theirs mustard yellow. 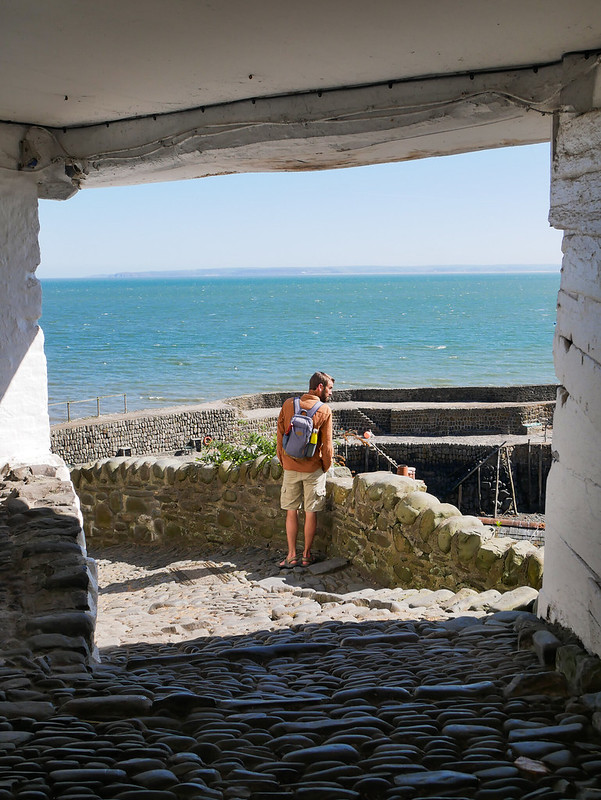 The cobbled lane led us past all the houses and a couple of cafes until we arrived at the harbour. It was low tide and a bit blustery but we headed to the back end of the harbour wall for a view. The beach itself was very nondescript compared to some of the beaches we’ve already visited in Devon. Even the sea didn’t look as pretty here and was a murky brown colour. 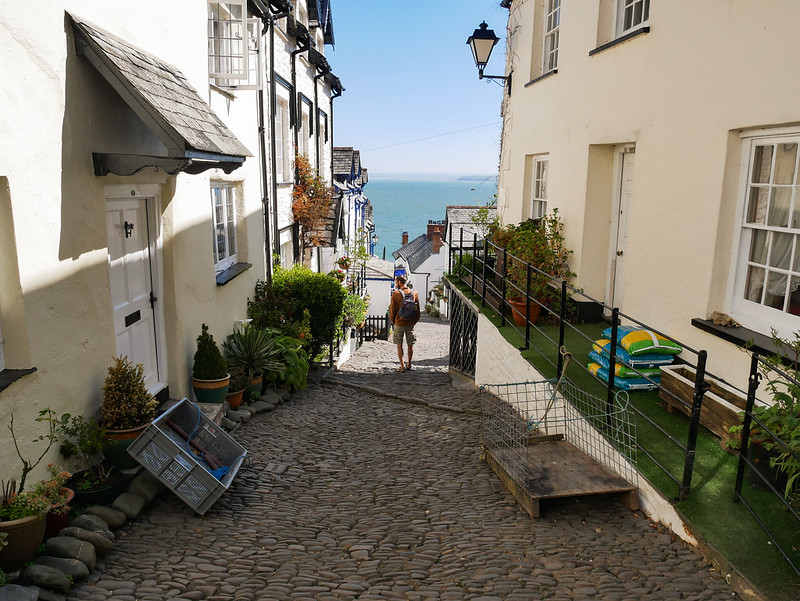 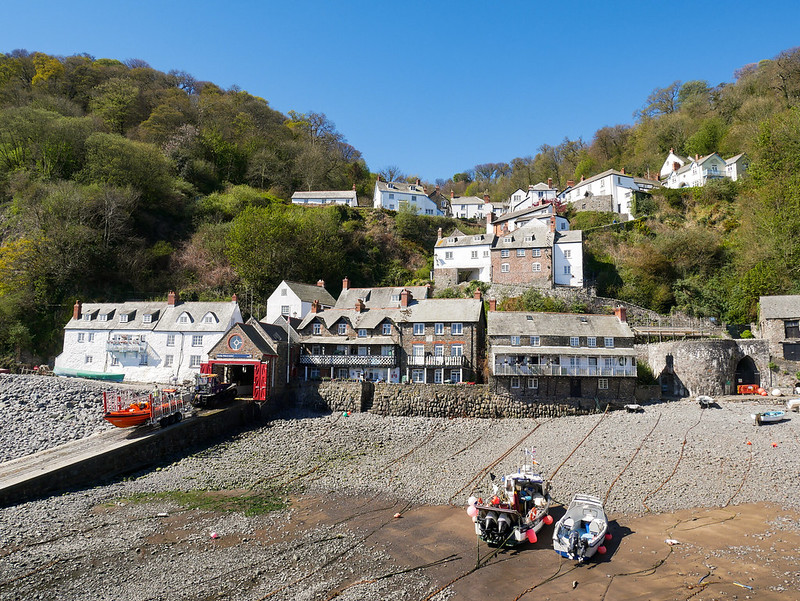 Sadly, we had to do the exact same walk all the way back. We broke it up by stopping for lunch in a patch of warm sunshine and finally 5 hours after we set off we arrived back at Helga. To be honest I think Buck’s Mill, the village we parked in was just as cute and it was absolutely free to visit, as it should be!

Because we started hiking so early we still had half the day left so we headed to the western side of Hartland Peninsular. We parked in the small village of Stoke and made our way to the coast on foot. After our not so impressive hike to Clovelly we were shocked to see such a dramatic coastline. There were black rocky islands in the water, razor sharp like a sharks tooth. But what impressed me more was the flat topped islands which had sheer rock edges and the most perfect grassy top. It looked more like it belonged in the Faroe Islands or Iceland than in England. 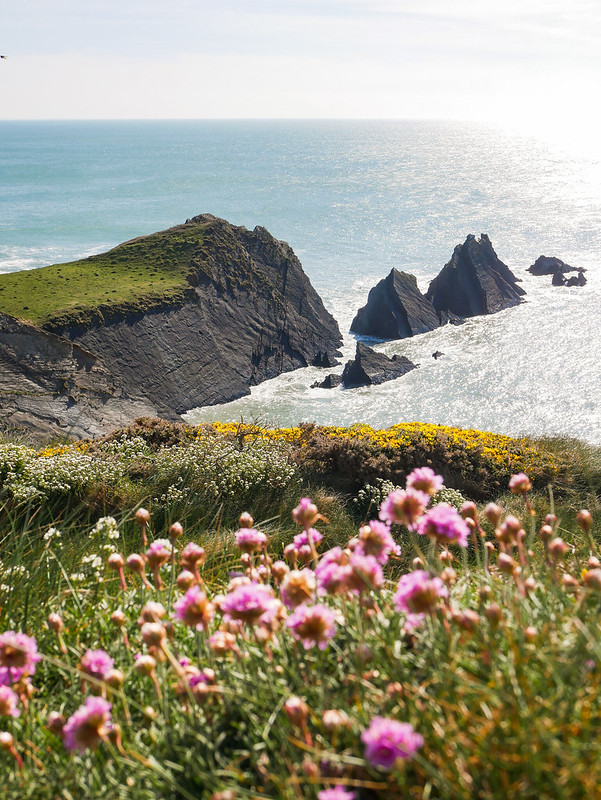 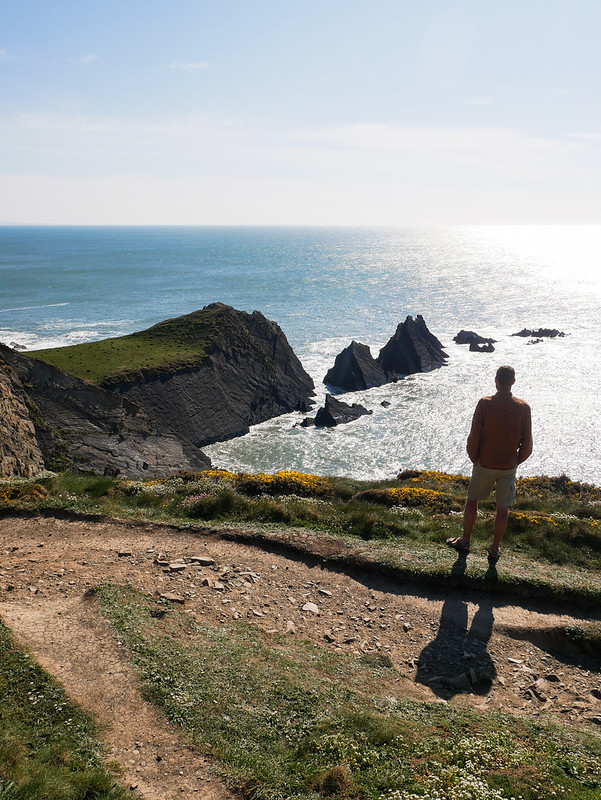 Already I was gloating to Craig about what a good hike I’d picked for us to do and we’d only just begun. To be fair we didn’t plan to do a big walk as we’d already hiked for 6 hours in the morning so this was supposed to just be a gentle evening stroll. I think the reason why I liked the scenery so much was because the rocky mounds in the sea looked like mountains. 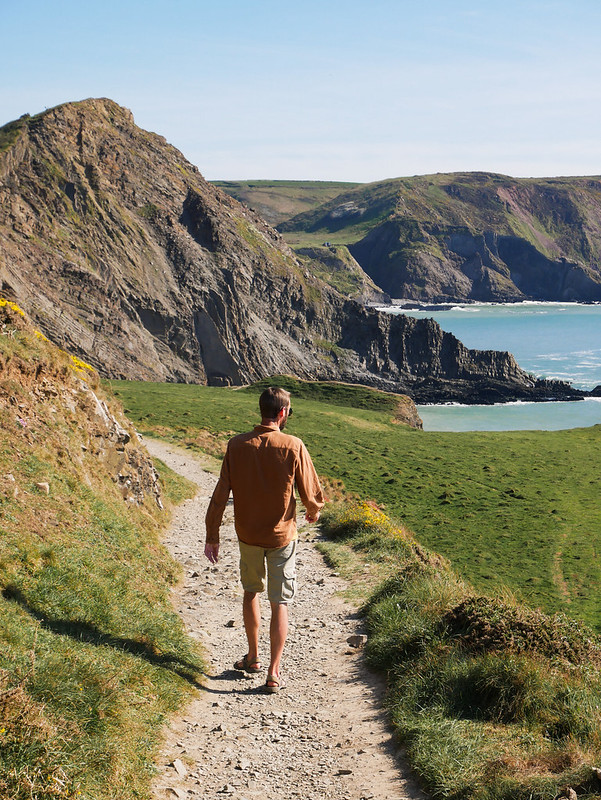 We soon arrived at Speke’s Mill Mouth Waterfall which dropped 60ft down the sheer rock wall. There was a perfect little swimming hole below it and the water gradually trickled down the gorge in a series of waterfalls and pools until it finished at the beach. After a long day exploring we decided to take a dip in the water hole for a freshen up before making our way back to Helga. 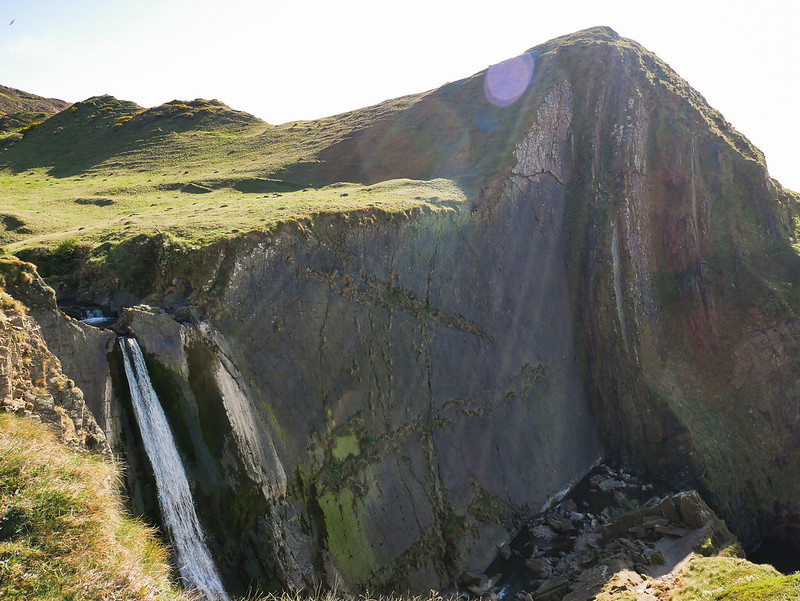 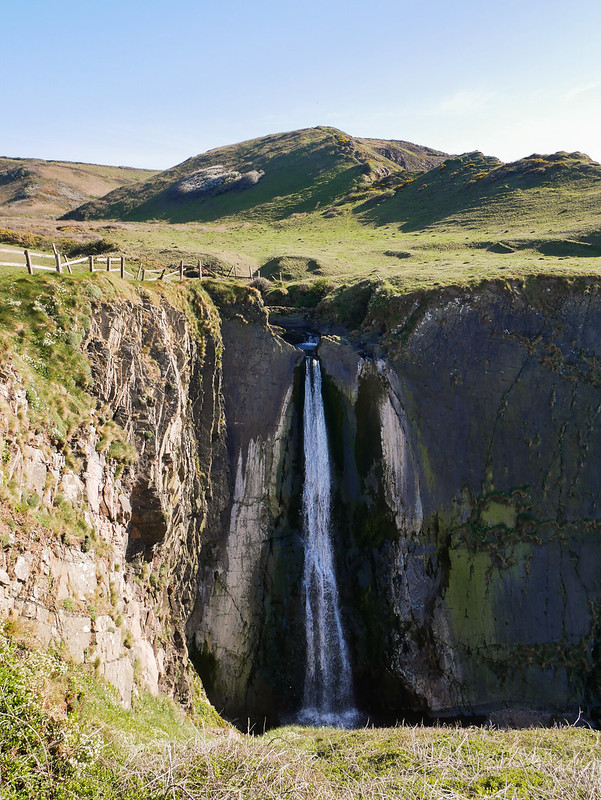 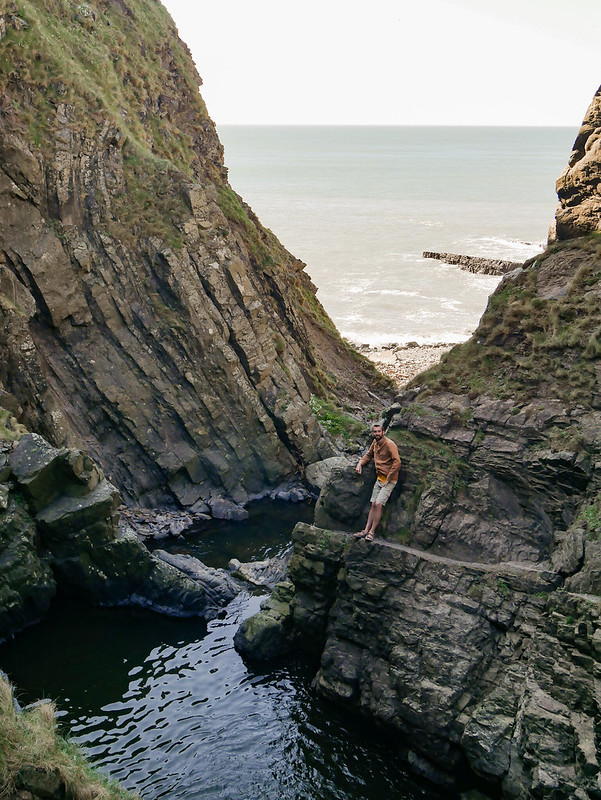 We loved the area so much that we decided to sleep in a discreet lay-by a few a few miles away and return the following morning for another hike. We actually managed to find a tap to fill Helga up with water so we took advantage and hand washed some clothes, hung them around the van and finally we were ready to hike. This time we walked through the countryside, enjoying a quick dip in a perfect mini pool for one. It looked so idyllic and clear when we arrived but as soon as I did a typical Indian dunk I disturbed the sediment and I was basically dunking in a murky pond. 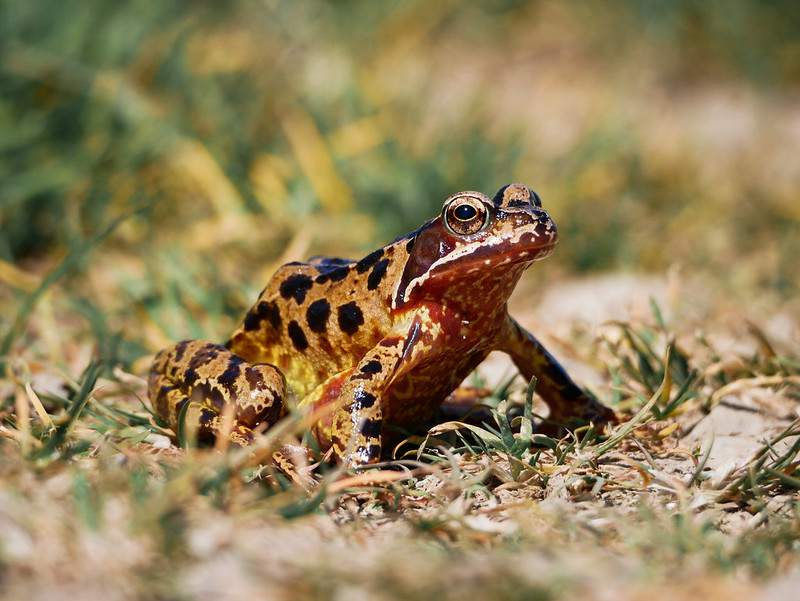 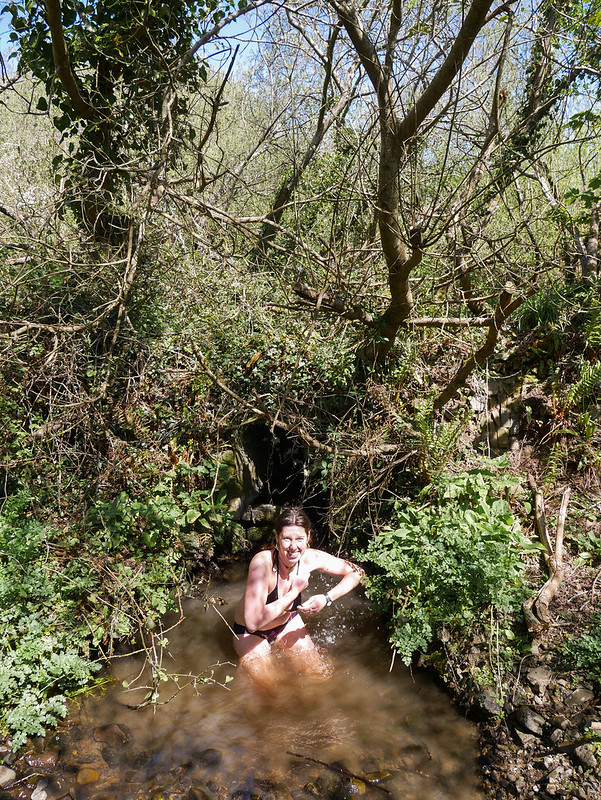 The country route wasn’t very eventful, although we did spot an interesting frog in the middle of the path. Eventually we arrived at the coast where we joined into the coast path and headed south. We found a beautiful spot for our picnic lunch in a fairly sheltered spot with a great view of the cliffs and yellow flowers surrounding us. 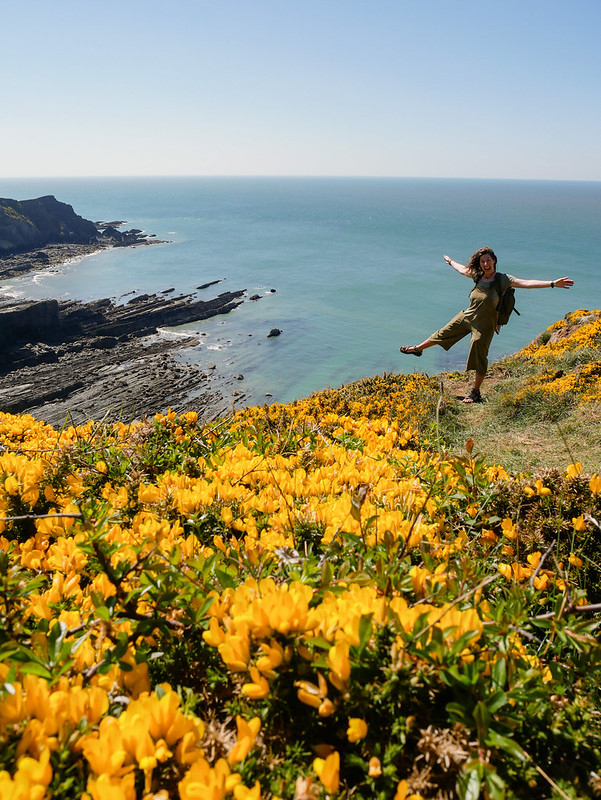 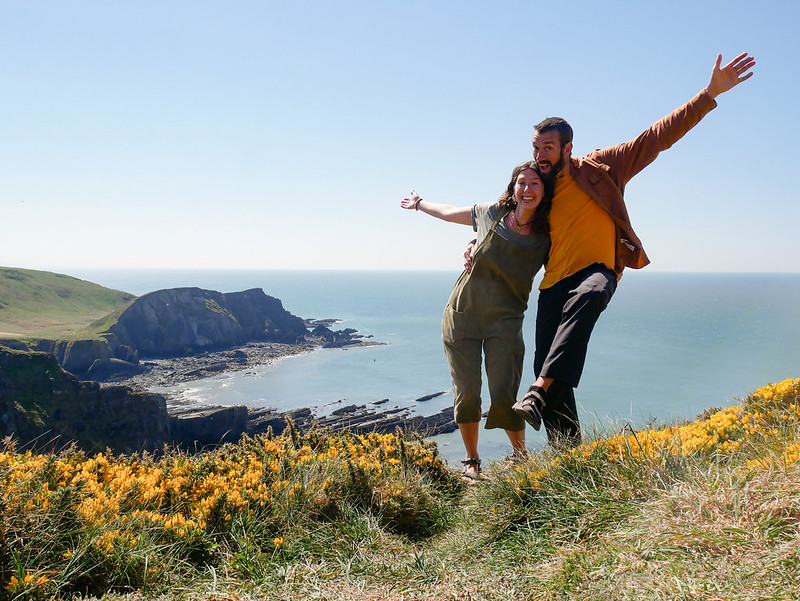 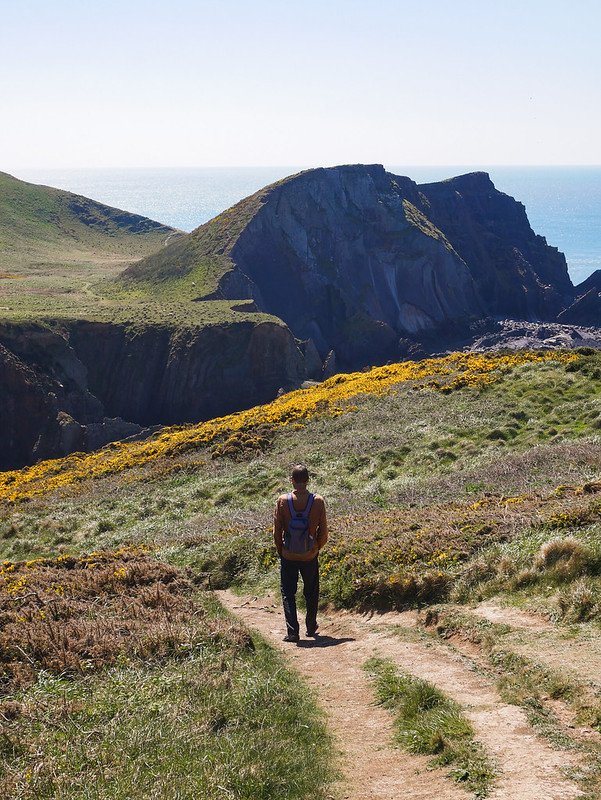 The hike got more impressive the closer we got to Hartland Quay. Small rivers trickled down the valleys and either settled in pools or fell down the cliffs directly onto the beaches. Craig had a quick dip in one of the pools while I gave it a miss this time. 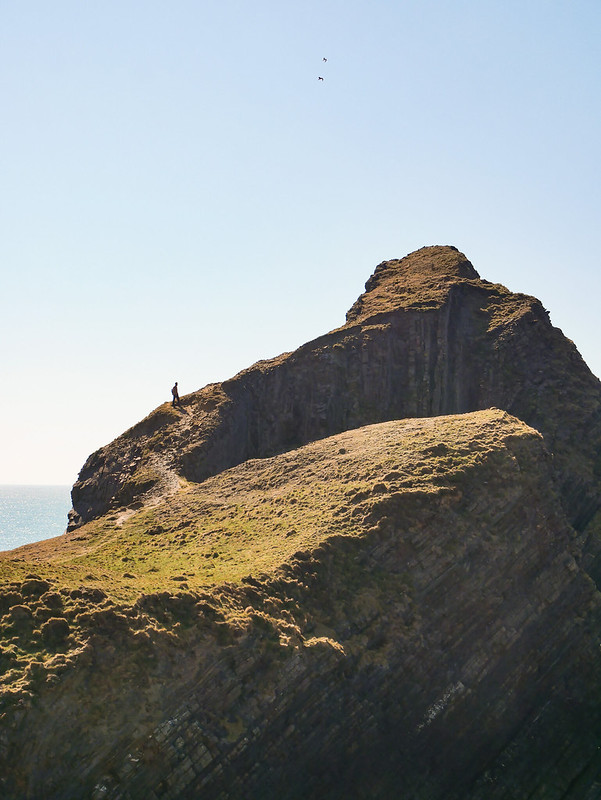 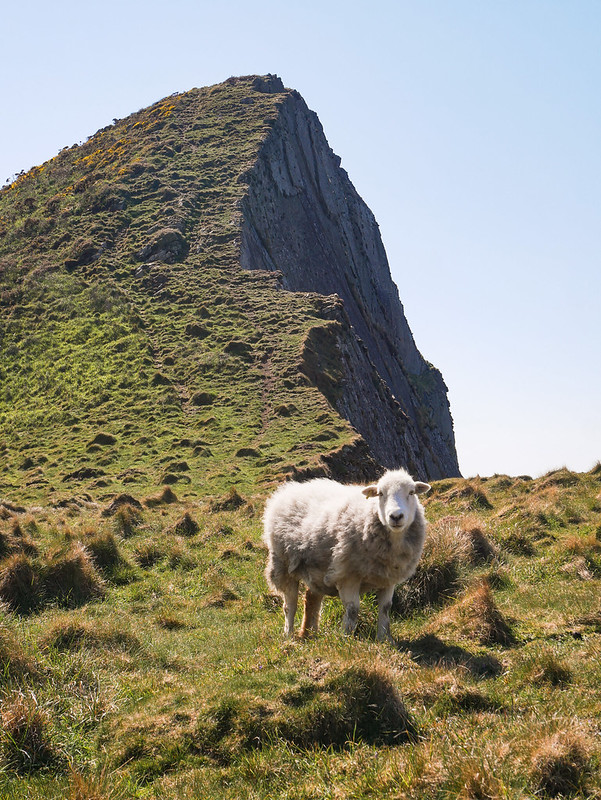 There was a paid parking area near the sea but they only charged at peak hours so when we finished our hike we drove Helga there. It was a perfect spot to spend a few hours relaxing and catch the sunset as we had an amazing view across the sea. Craig pulled our awning out a little and used it as our washing line for our clothes that didn’t dry much in the van and then he cracked on with dinner, making us a tasty homemade curry. 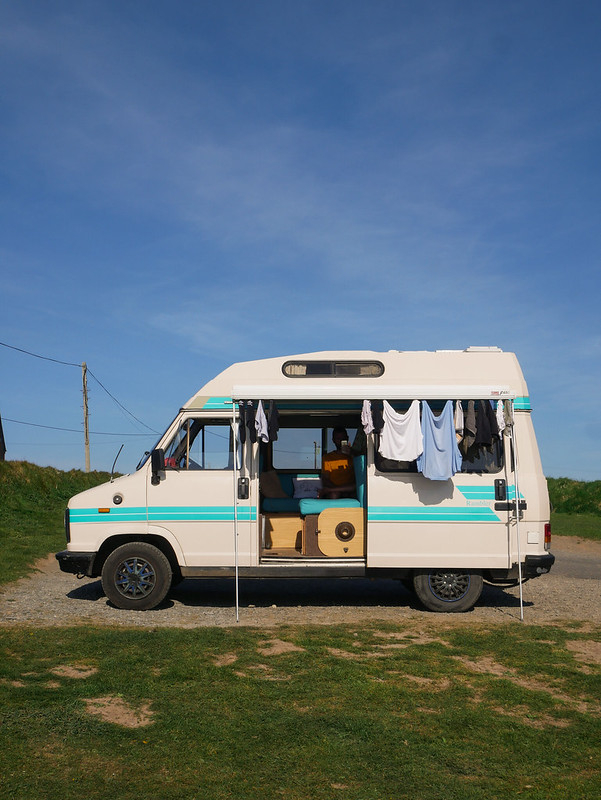 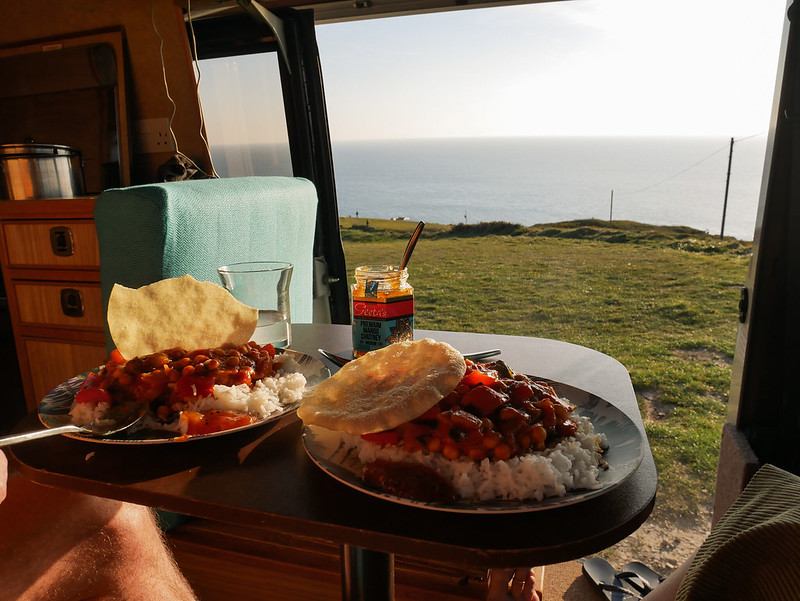 While we were parked up a vintage convertible car pulled up with some camera crew. A sweet lady was driving it around while the husband stood chatting to the crew. All of a sudden he appeared at our door and complimented how good our curry smelt and said “I thought there would be an Indian family in here”. He was a jolly old chap with eyebrows so large they looked like big sweeping brushes. It was a bit awkward chatting to him as he was almost sticking his head into our van – no doubt he’s had both his vaccines and didn’t think to maybe stand back to protect us. Our doorway area had all our laundry hanging up so our undies and socks were swinging around his head in the wind. It was a bit embarrassing but he seemed to find it amusing and said it didn’t matter if we were in the back of the film as it looked like we had our best underwear on display. Thank god he didn’t see my knickers drying on the dashboard with elastic hanging out the seams. 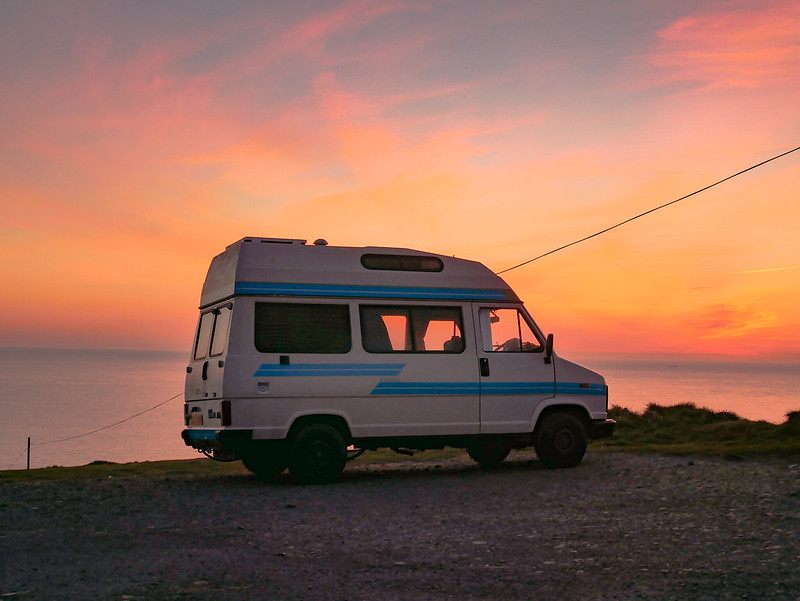 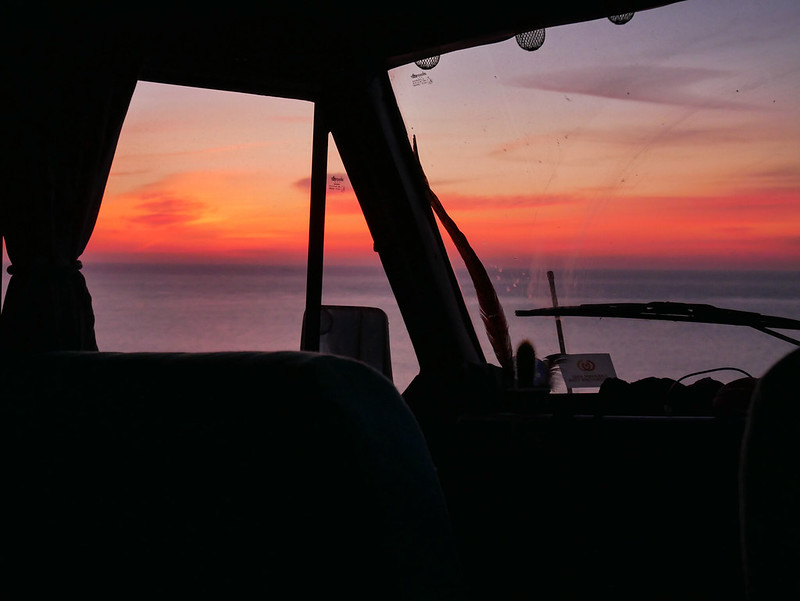 We knew we couldn’t camp in this spot but we made sure to stay and watch the sunset and it was an absolute cracker. Just as the sun dipped below the horizon the few people that were in the carpark headed home. That always baffles me as the best colours during a sunset tend to happen after the sun has gone down. So of course we stayed and watched the clouds become tinted with pink and orange hues. The sky was filled with colour and it reflected off the sea. We stayed until it was almost dark and then headed off to our little camp spot. 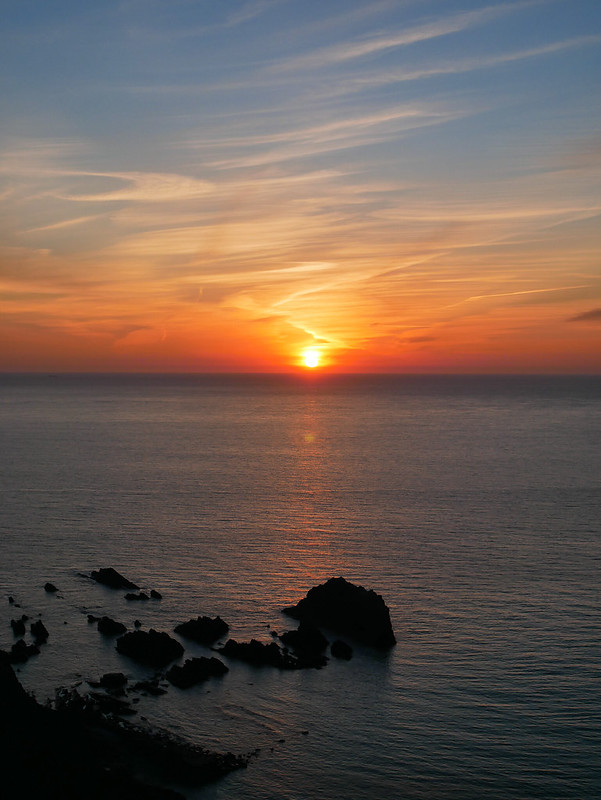 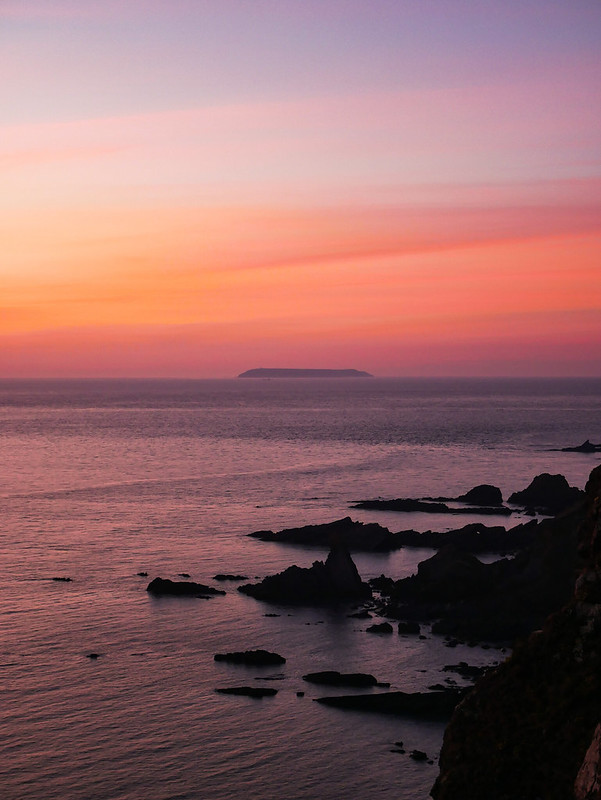 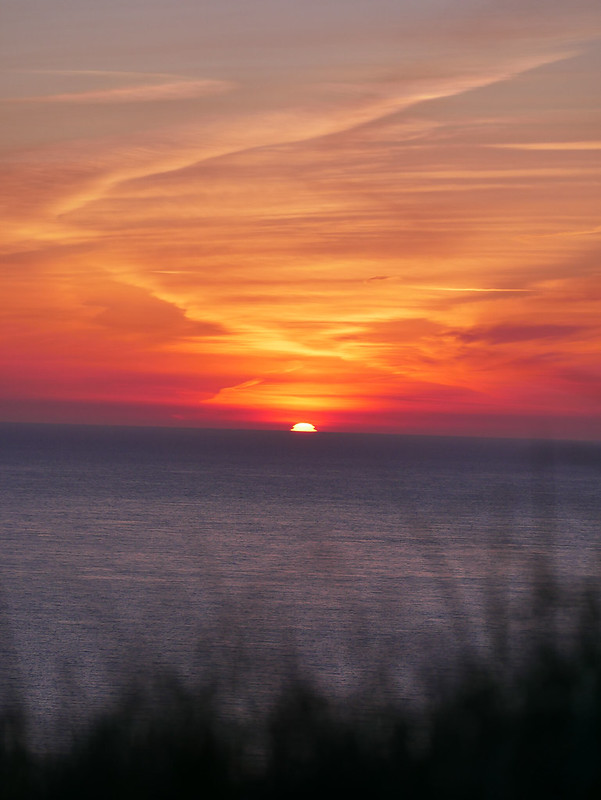 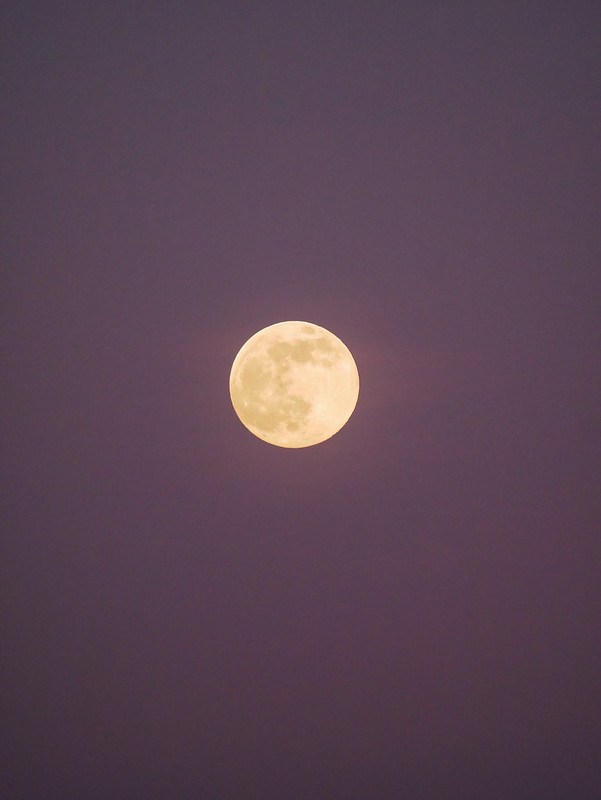