Once we exited Exmoor we continued along the coast and headed for a beach I wanted to visit. We prefer to try and find free parking and just walk a little further, so that’s exactly what we did – parking up in the quaint village of Berrynarbor. Signs declared it the winner and runner up for the best kept village in Britain. Probably a rather stressful place to live with neighbours sticking their nose up if you have a rose out of place. 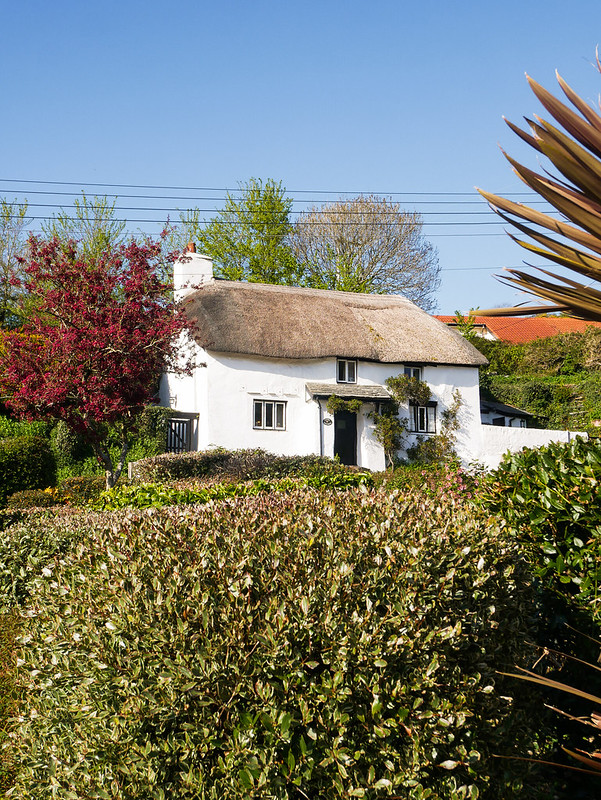 The beach we were heading to was called Broadsand and after climbing down the steps we discovered we had the place to ourselves. There was a large rock that acted as a little island at high tide, but at low tide it created a double beach; on one side was the calm, protected bay and on the other was the open sea with choppy waves pushing driftwood and seaweed onto the sand. 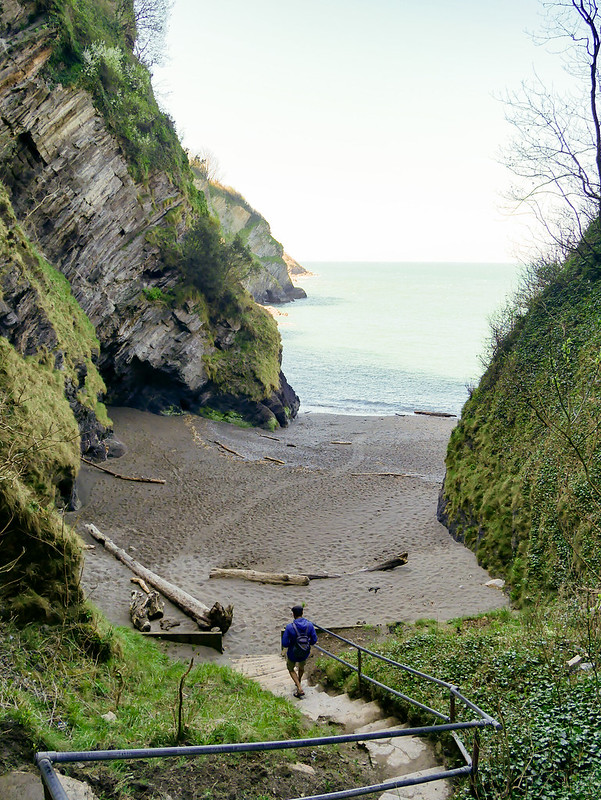 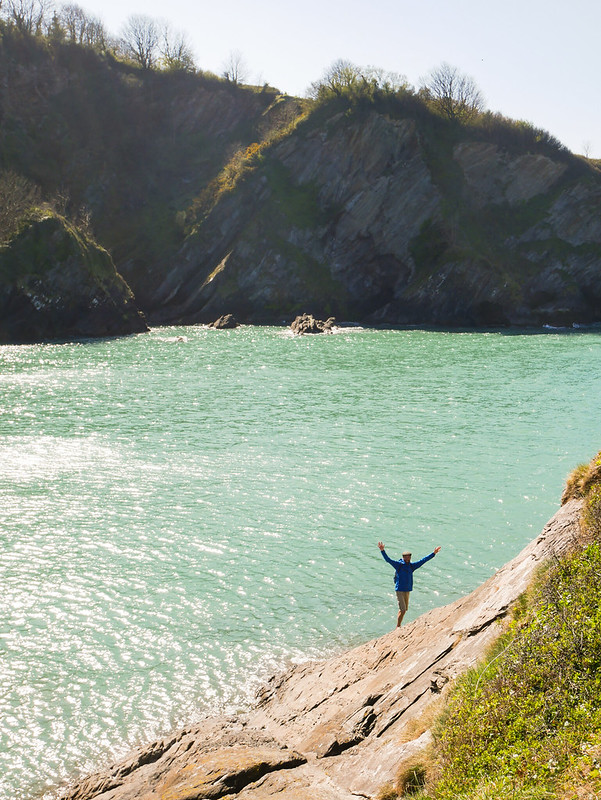 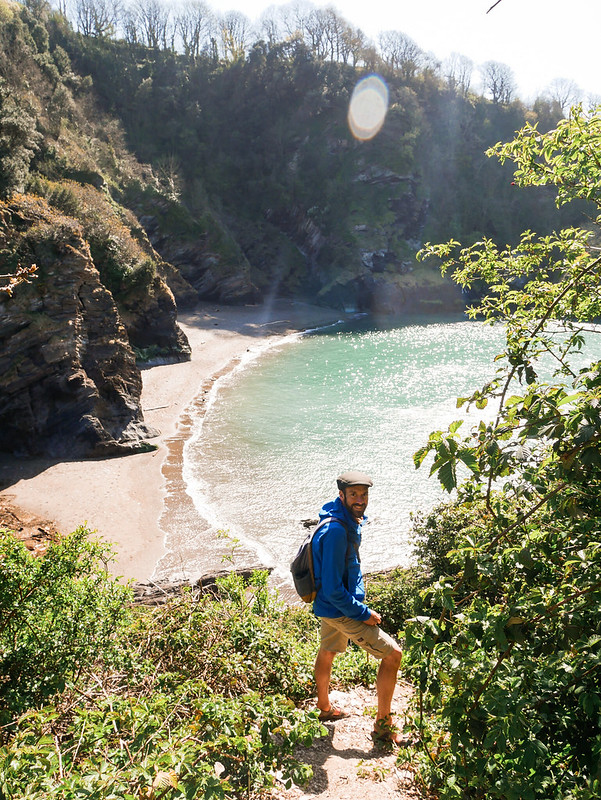 We climbed up the extremely steep track to the top of the island and then found a spot on the beach to enjoy a cup of tea. There was a dead goat on the sand so we made sure not to sit too close to him, but we were curious how he got there, did he fall off the cliff or get washed up onto the beach? 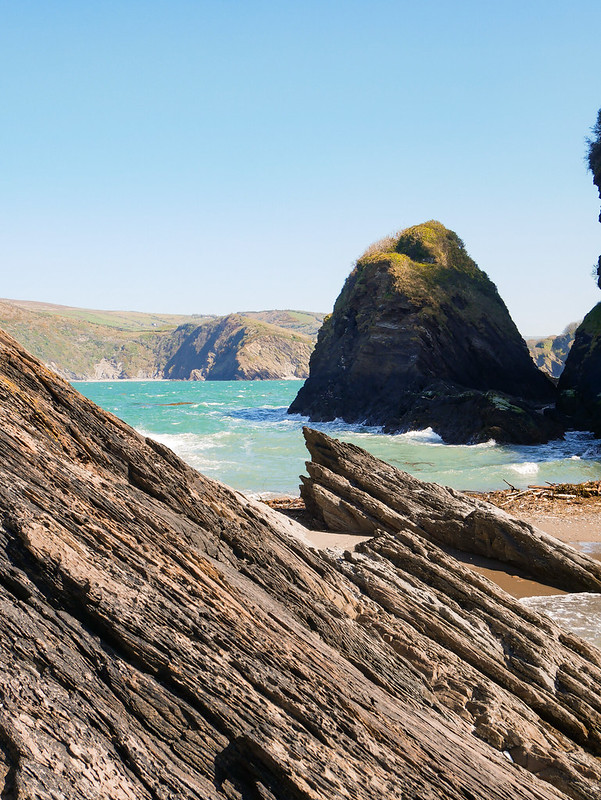 After enjoying our private beach we headed back to the main trail which offered the best view and by that point a few other people had hiked down and were swimming in the sea. Further down the coastline we could see Watermouth Cove, a deep protected bay that looked worth hiking to. It was low tide so all the boats moored up in the bay were marooned on the sand like a little boat graveyard. We walked all the way to the end of the cove and decided we actually preferred the long-distance view of it after all. That evening we parked up in a sort of rest area by the sea so we were treated to a lovely view as the sun went down. 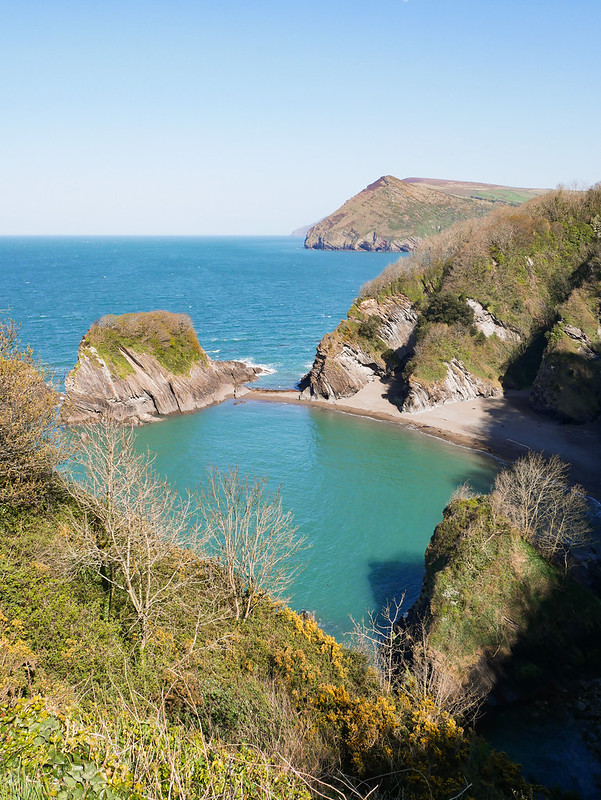 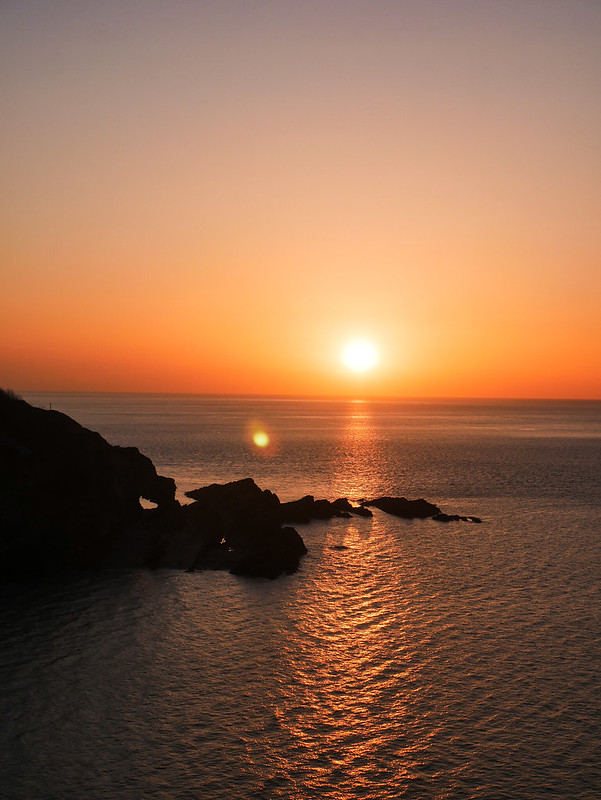 The next day we headed to Lee Bay where our friends lived. It was a tiny village set beside the sea with thatched houses and lots of character. Our friends weren’t around until the following day so we explored the area on our own, starting with a morning stroll through the woods. 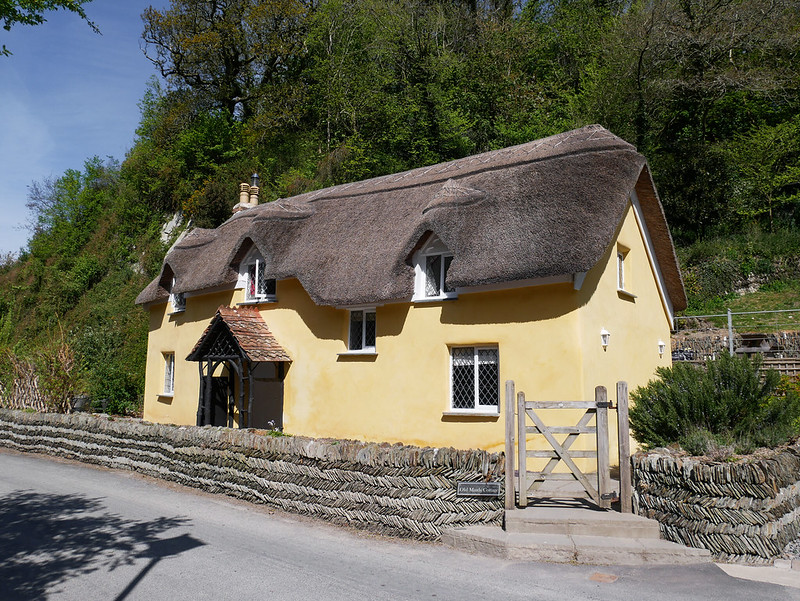 By noon we were back at the van and ready to do a coastal hike so we packed a lunch which we were hoping to cook on a fire. A concrete path had been built across the rocky sea floor and created a low-tide footpath around the coast. We navigated our way between rocks and up some hand carved steps until we arrived at a beach. It was a little blustery so finding a spot for a mini fire was tricky. We got some drift wood and started the smokiest of fires which I wasn’t best pleased about. Craig loves fires, while I tend to get rather irritated by the smoke. Luckily it all calmed down and we used some sticks to cook our vegetarian sausages on which were delicious. We actually had them again a week later, cooking them in the oven this time and they were so dry and tasted different so we’re wondering if we ate our fire-cooked ones raw which we laughed a lot about. 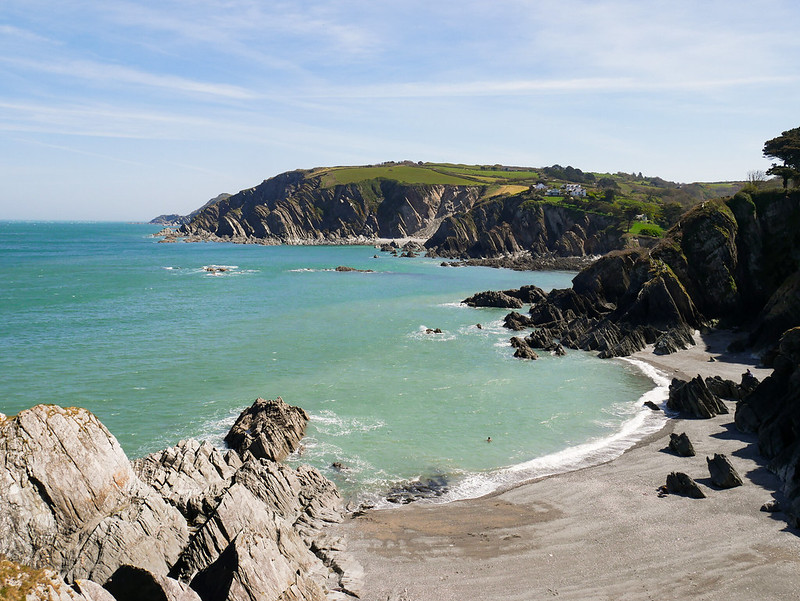 We were toying with the idea of a swim but it was just too windy so after a couple hours relaxing in the sun we headed back to Lee Bay. It seemed to be more protected at this bay and surprisingly warm so we decided to have a quick dunk in the sea, knowing we had some water in our van to have a shower afterwards and wash the salt off. It was high tide now so we walked along the concrete path until our feet were in the water and then jumped into a shallow section, it was bitterly cold but as usual we felt wonderful and zingy afterwards. After a little relax time in the van we headed out to catch the sunset which was a really beautiful one with fuchsia clouds. 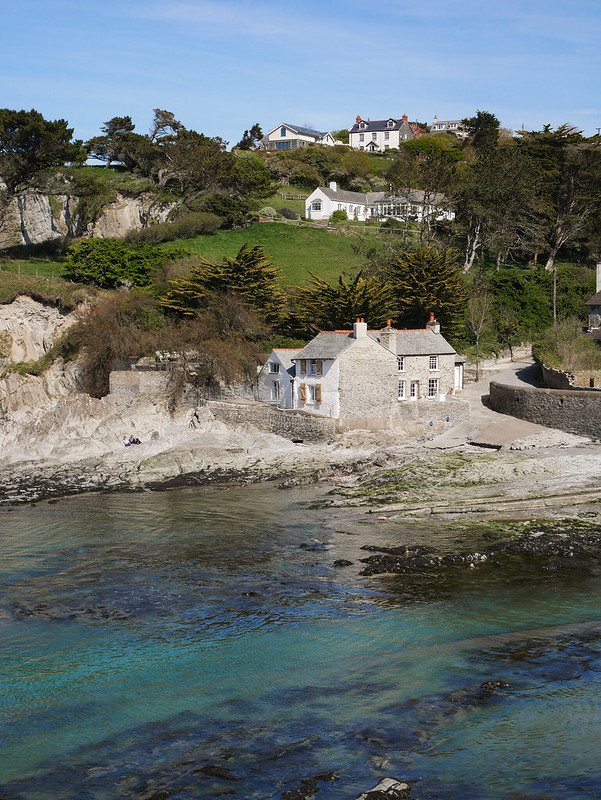 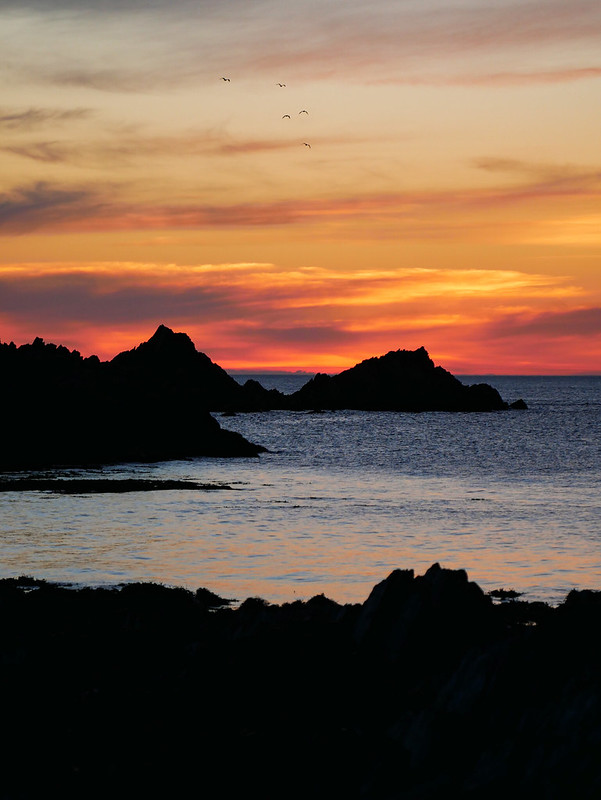 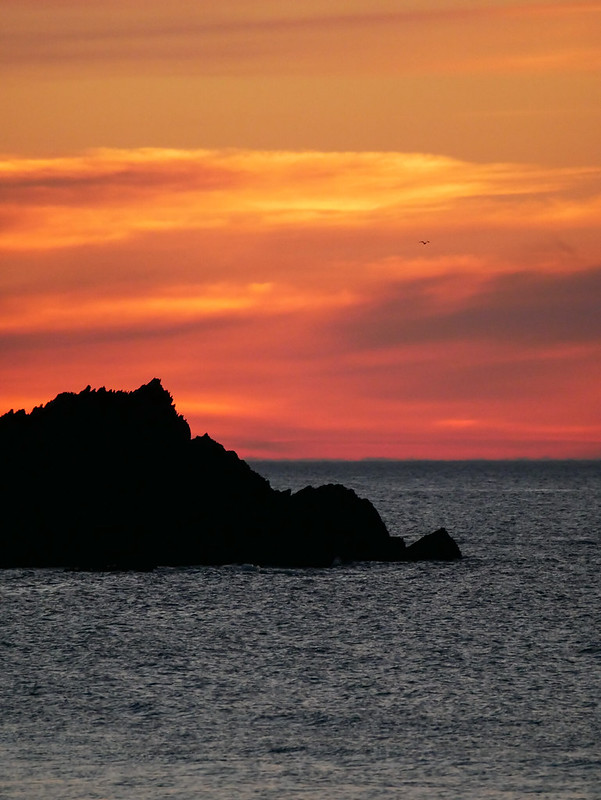 The following morning we caught up with our friends in a pub garden and had plenty of funny stories to share. They both had work at noon so we bid them farewell and seeing as the sun was shining we set off on a coastal hike. It was such a beautiful area to hike; the coastline was dramatic and rugged, the sea a beautiful deep blue colour and lush green pastures rolled into the distance. 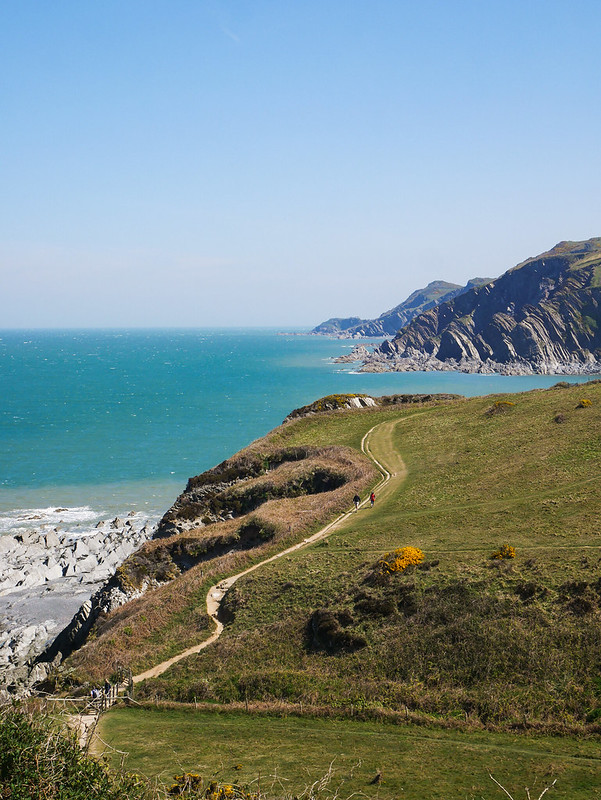 Our friends said we’d pass a beach where the access down was closed but there was a different route we could take which involved a rather precarious slope covered in slippery scoria. We soon saw why the path was closed, the stairs leading down to the beach had literally snapped off and were hanging above the abyss. We had the beach to ourselves so we sat down behind a rock, sheltered from the wind and got a little toasted from the sun. Instead of hiking back the same way we did a loop walk via some farmers fields, passing a tiny snake on our pathway. I also managed to slip over and landed with such a thud that I felt my brain jiggle around my head. It was like I’d been hit by a car and my thigh was instantly bruised. Luckily there wasn’t anyone around to see my clumsiness. 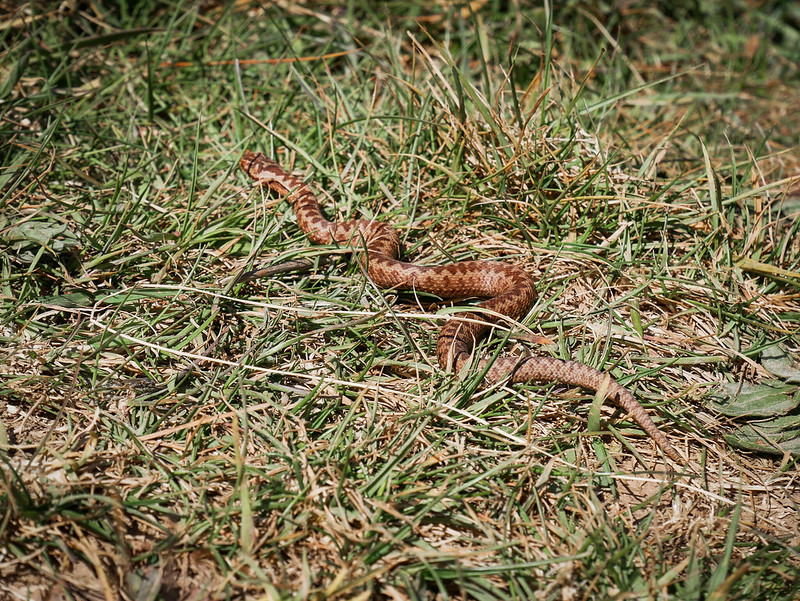 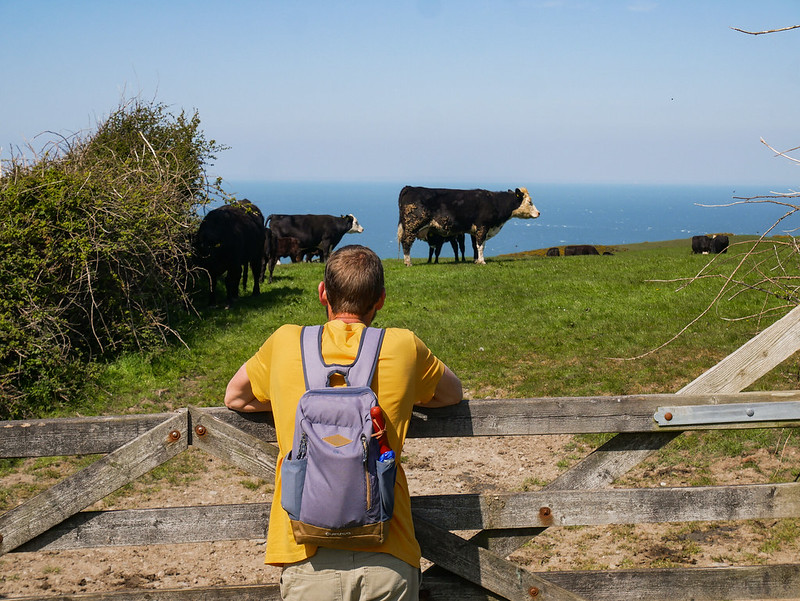 After a couple of lovely days in this area it was time for us to hit the road and make our way further south.