We made our way into Exmoor National Park, a place I knew very little about which meant we were pleasantly surprised once we started exploring. Our first hike was to the popular Tarr Steps which is a medieval bridge made of huge stones slabs. We crossed the bridge where each stone beneath our feet weighed roughly 2 tons and led us onto a beautiful riverside trail. The river had some amazing swimming holes for a refreshing dunk but it just wasn’t quite warm enough for us to brave it yet. We continued beyond the main loop trail which meant we missed our opportunity to cross the bridge and instead had to wade through the water. It was fairly shallow so we just removed our shoes and rolled our trousers up. The water was unbearably cold on my feet but I couldn’t move any faster as there were slippery rocks covered in algae. The other side of the river was deeper and came up above our knees which was a problem for Craig in his heavy jeans which got soaked. 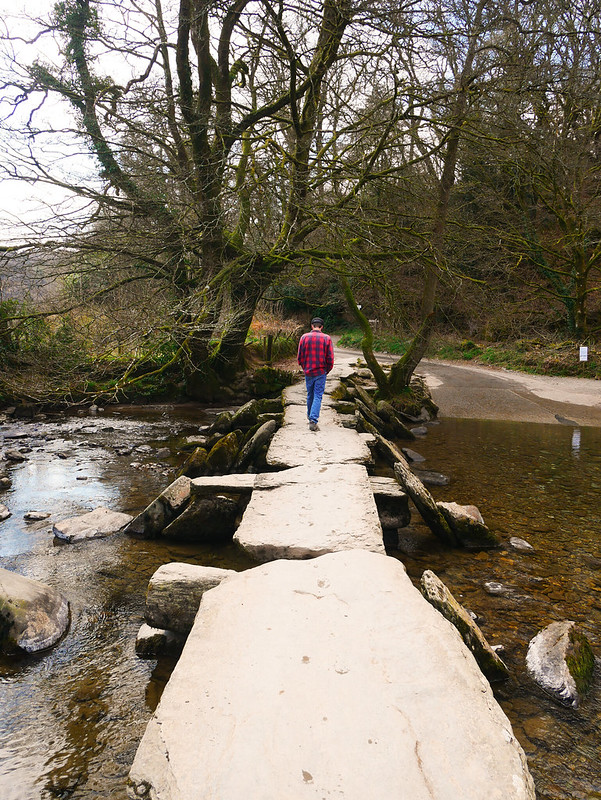 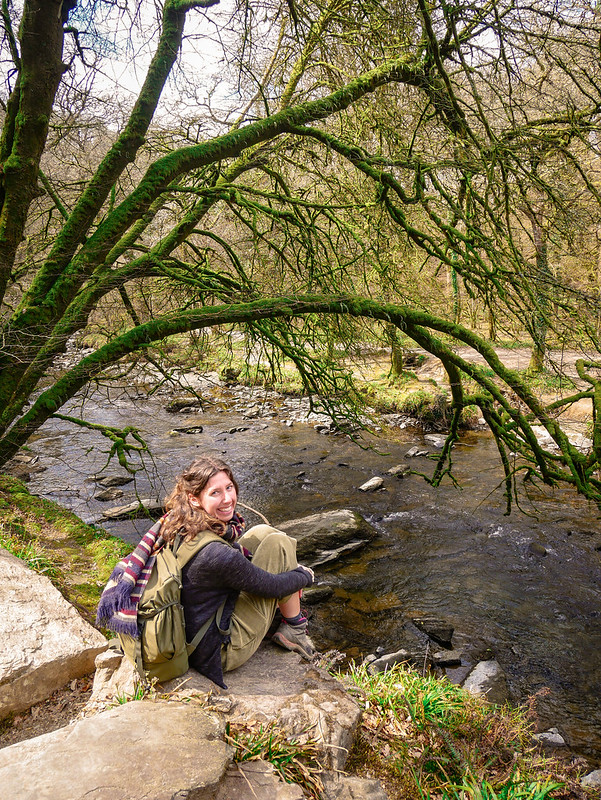 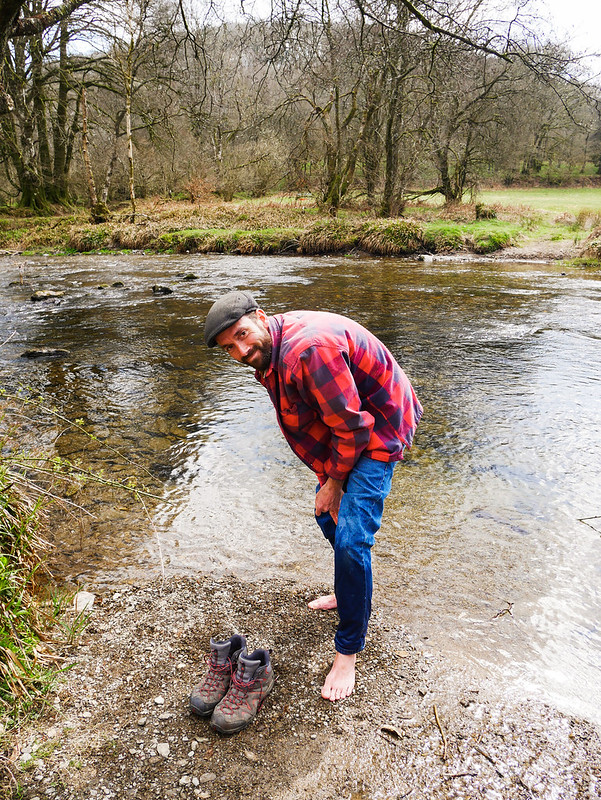 Once we were back in Helga and on the road we found a beautiful spot to stop for a cup of tea. Craig is trying to take more videos and photos of me as I’m usually the one that has the camera and captures him. But I’m an incredibly awkward human and while he was trying to film me making tea and panning across to the view outside I got a serious case of the giggles. The kettle was whistling loudly and casualness wasn’t’ coming naturally to me so we ended up with half a dozen hilarious outtakes of us roaring with laughter. Craig was laughing so much he actually cried and I’ve never seen him shed a tear in 14 years! 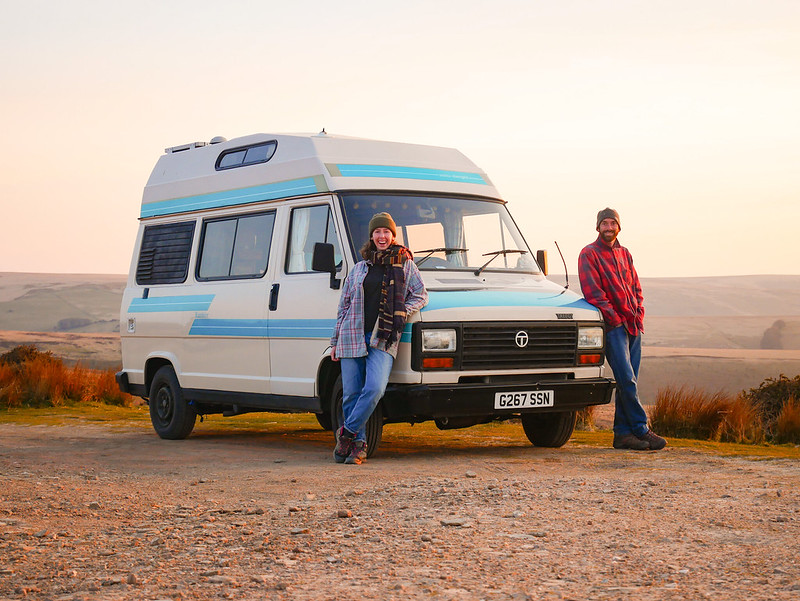 We weren’t sure on the wild camping rules in a British National Park but we didn’t spot any signs saying it wasn’t allowed so we decided to give it a go. The road was incredibly quiet and we found a perfect gravel carpark with an amazing view across the moors with wild horses in the distance. We enjoyed our first pizza in the campervan and then headed out on a sunset walk. 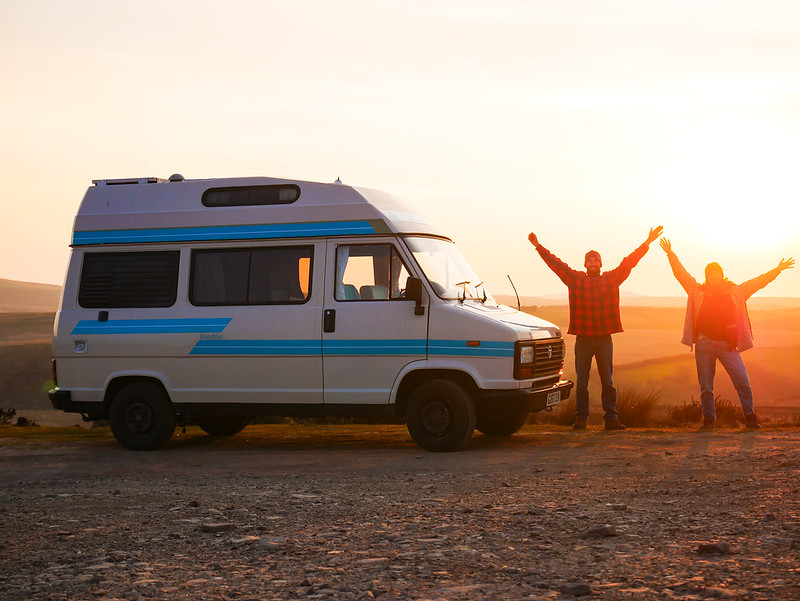 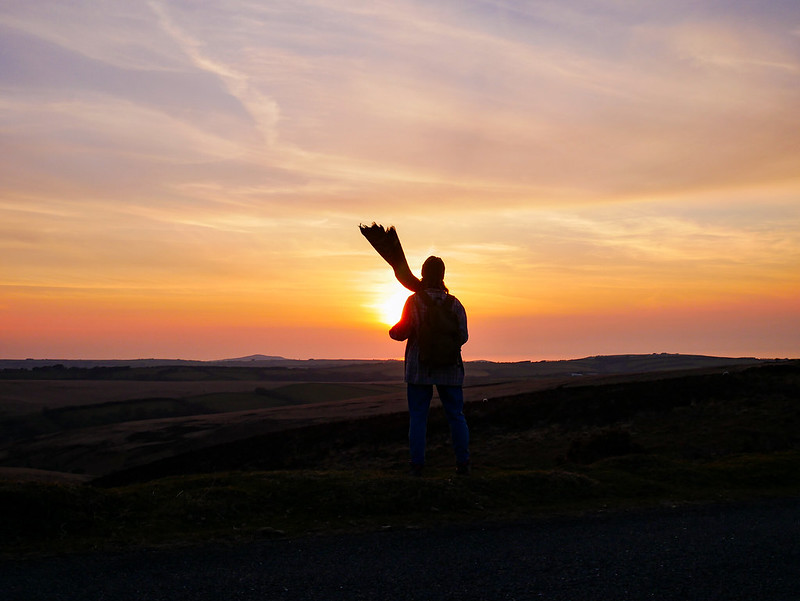 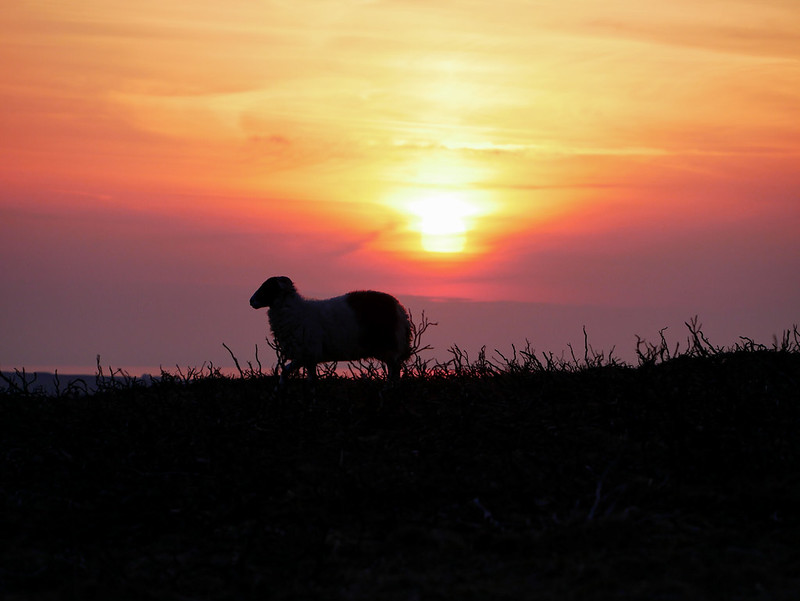 It was such a nice time to be out walking and we were the only people around for miles. We spotted three deer roaming the hills and on our way back Craig got his binoculars out to investigate a vehicle that pulled up near Helga. It turned out to be another campervan, but the owner was carrying a huge air bed on his head and putting it in a field! I guess they were braving a night outside to star gaze as it’s said to be one of the best areas to witness a dark sky in England. 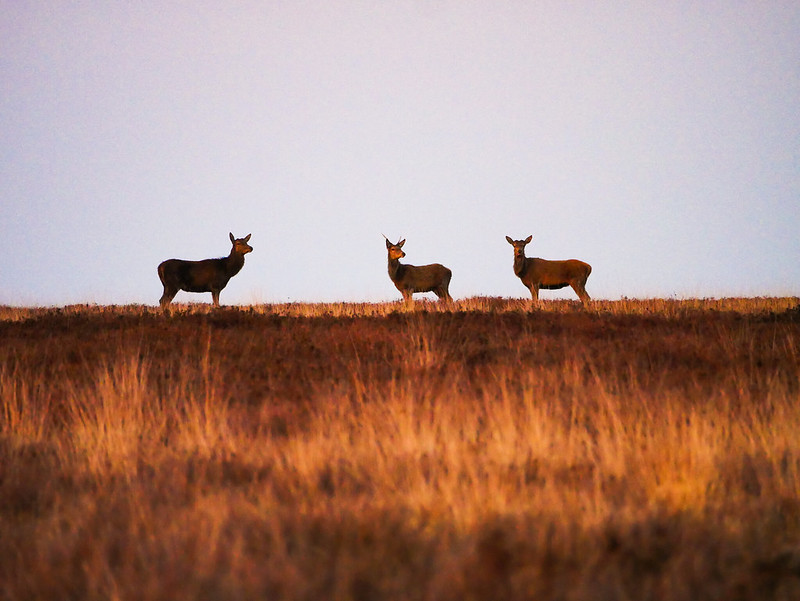 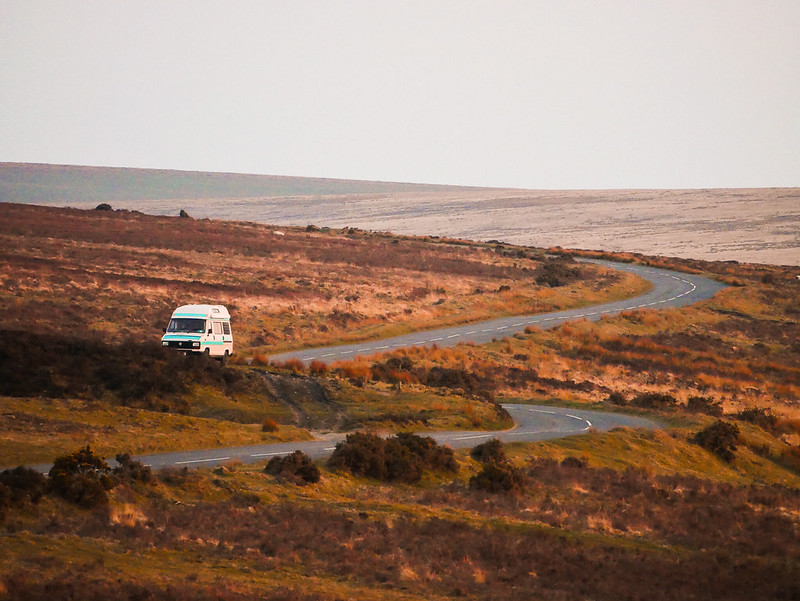 We woke early to make sure we didn’t bother anyone by camping there and then we made our way to Watersmeet to do another river hike. This one had some pretty rapids and waterfalls along the way and because we were hiking so early in the morning we had the trail to ourselves. We made quick progress so decided to head up the side of the valley and towards the coast. It was a bit of an uphill slog but we were rewarded with a total change of scenery with valleys filled with trees and lush green farmers fields on a plateau above. After getting a little view of the coast we decided to make our way back to Helga as we were only planning on hiking for an hour so we didn’t bring any food or water and after three hours hiking we were rather parched. There’s a lot to see in the park so we’re excited to explore the coastline over the next few day’s. 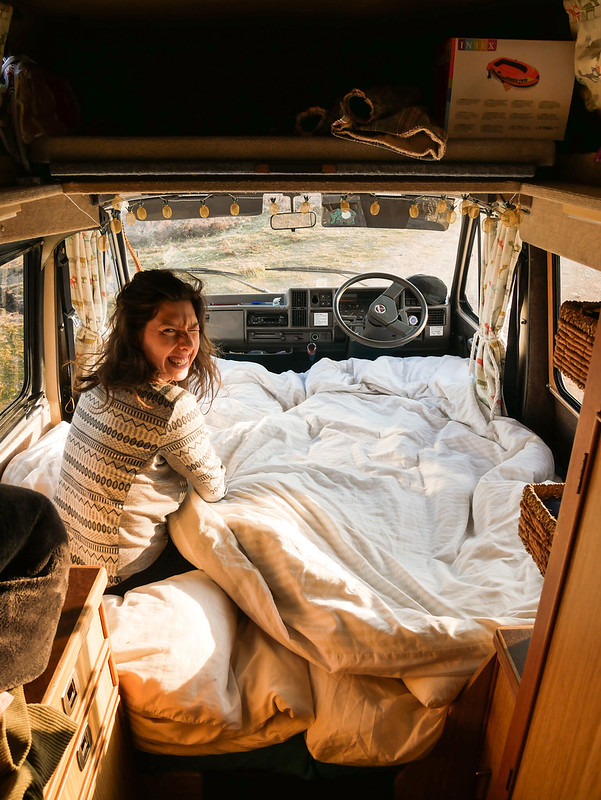 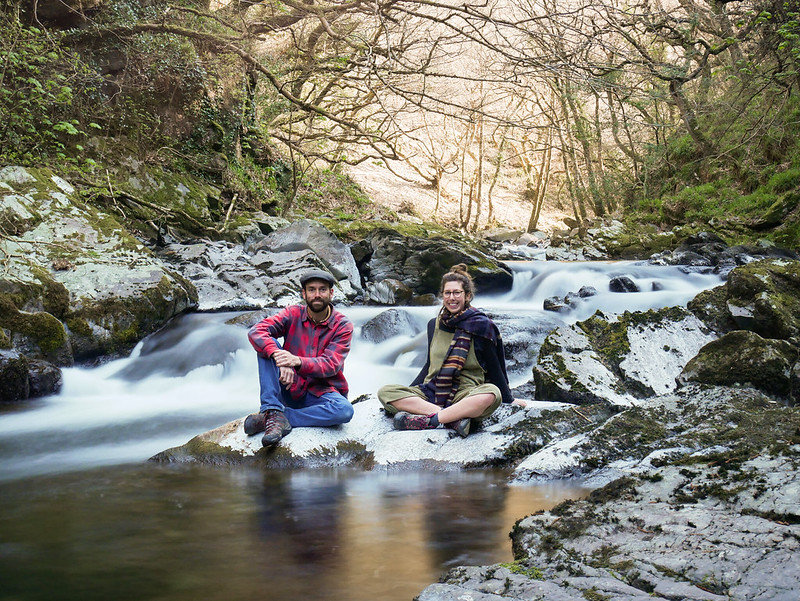 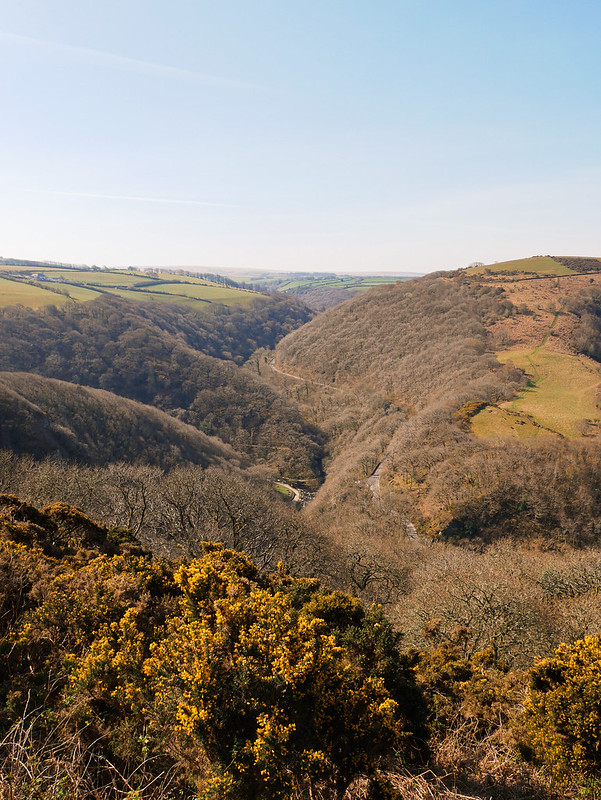 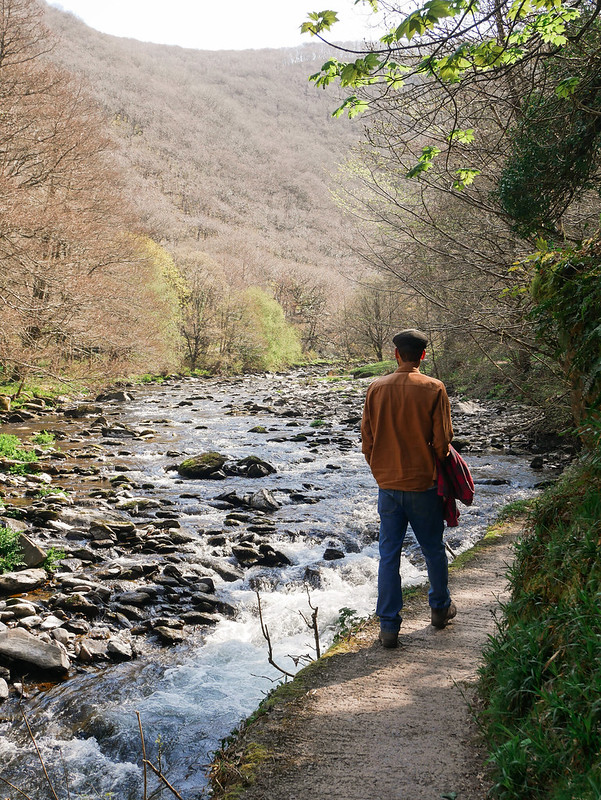