In early March we finally moved into Helga, our campervan full time. It wasn’t the smoothest moving in day as our boiler leaked water everywhere and our indicator stopped working so we had to wave our arm out the window which was highly embarrassing. But, she’s been a cozy home for us during lockdown in Sussex and now that the restrictions have finally eased we decided to grasp the opportunity of freedom and hit the road. 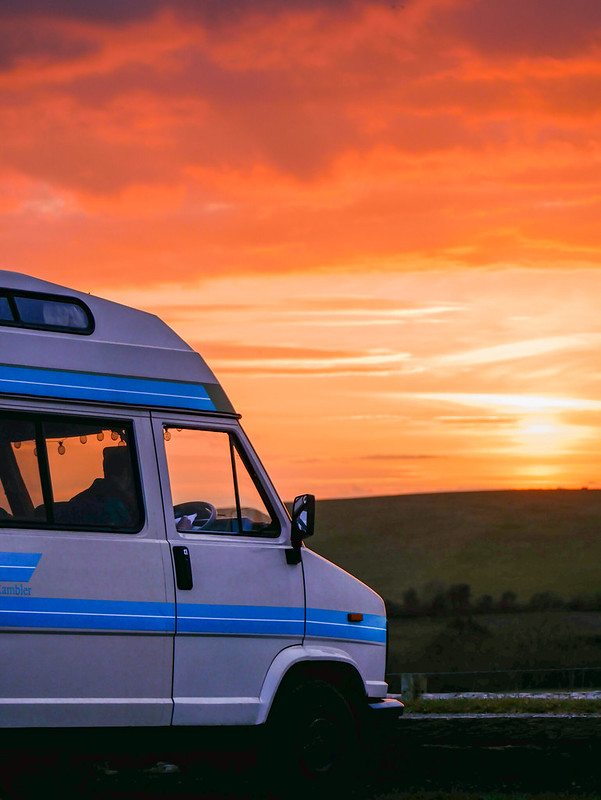 Our plan is vague, but we knew we wanted to explore Devon and Cornwall as we’ve never been there before. In fact we’ve hardly seen anything in England, choosing to save it for when we’re older as ‘it will always be there’ and enjoying more adventurous locations abroad while we could. With that being said we waved goodbye to Sussex and headed west. It was a bloody dull drive with plenty of traffic and a lot of concentration required without a gps. We drove two hours before taking a break in the New Forest National Park and having some lunch with a view of the wild ponies. 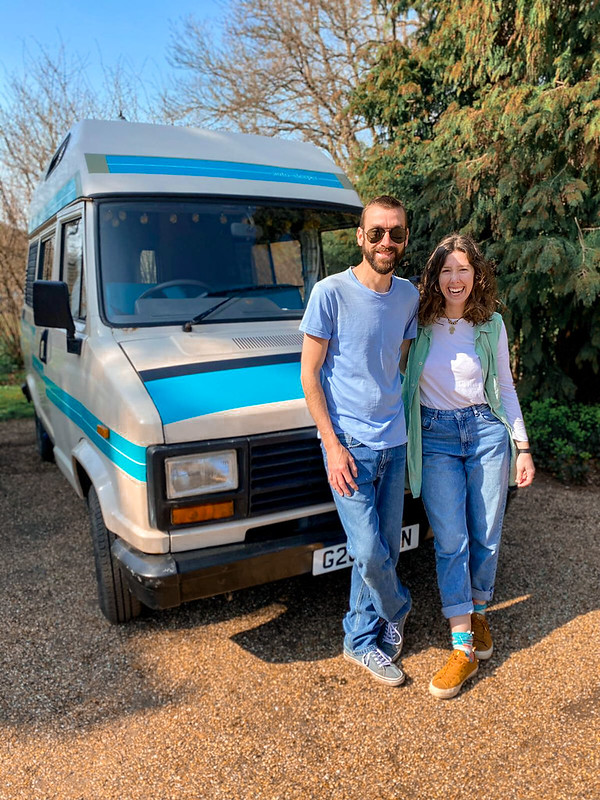 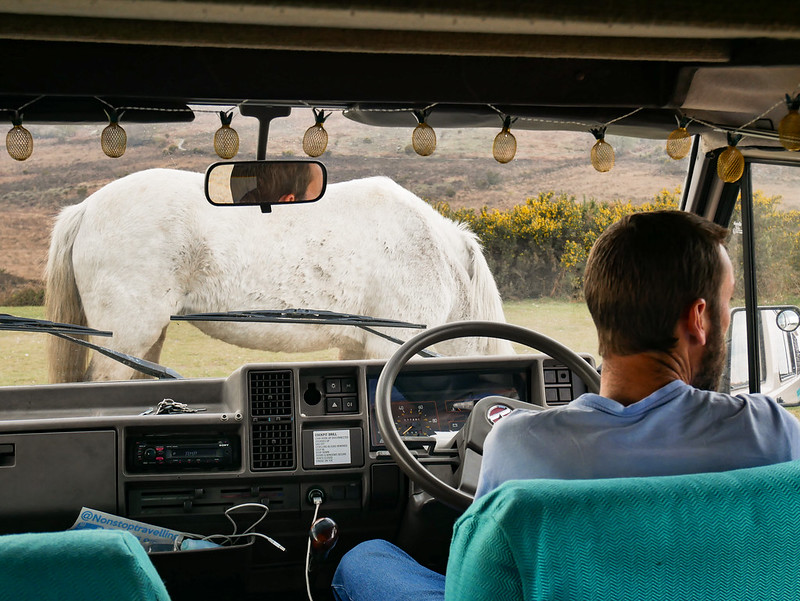 After a couple more hours driving through traffic we veered off the highway and were transported onto narrow roads designed for toy cars. I can’t imagine what Americans must think when they visit England and end up on a country lane in their rental cars (America has lovely wide roads and huge parking spaces). We even had to navigate our way through a carpark with metal bollards built to prevent big motorhomes or caravans in – usually it’s to stop traveller communities from setting up camp. But Helga managed to wiggle her way through with around 5cm space on either side! 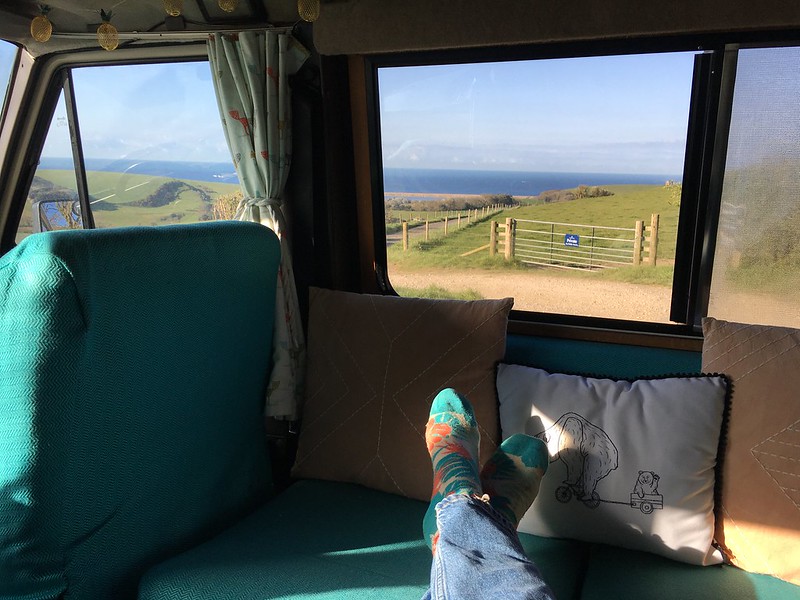 We didn’t end up staying in that carpark though, instead we drove across lush green pastures filled with typical black and white cows. Eventually we found the perfect spot to wild camp for the night. It was just a tiny carpark but with an incredible view of the countryside and sea.

We decided to head straight out on a little hike to stretch our legs. One of the main reasons we love living in a van is for the freedom, and being able to park in a different place everyday. So it was quite a treat having hiking trails on our doorstep again. We decided to celebrate our first night on the road by taking some gin, tonic and pistachios on the hike. We found an ideal spot to sit and enjoy the view, but I soon felt a raindrop dollop on me. Black clouds swooped in but the sun was managing to pierce through and we were rewarded with a faint rainbow. In typical British style we tried to grin and bare the rain, like a family trying to enjoy the first bbq of the season. But the rain persisted and it’s not convenient having a van full of damp clothes so we made a run for it and enjoyed a homemade vegetarian chilli when we were back in the van. 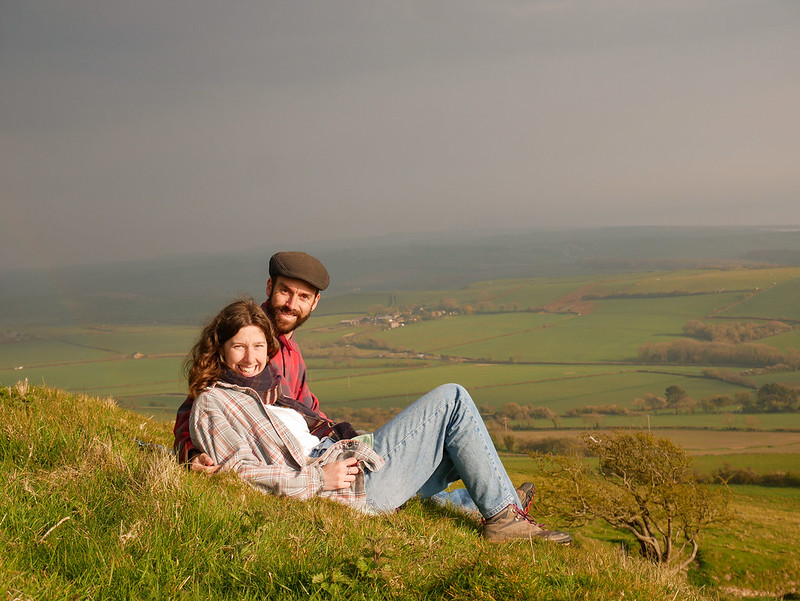 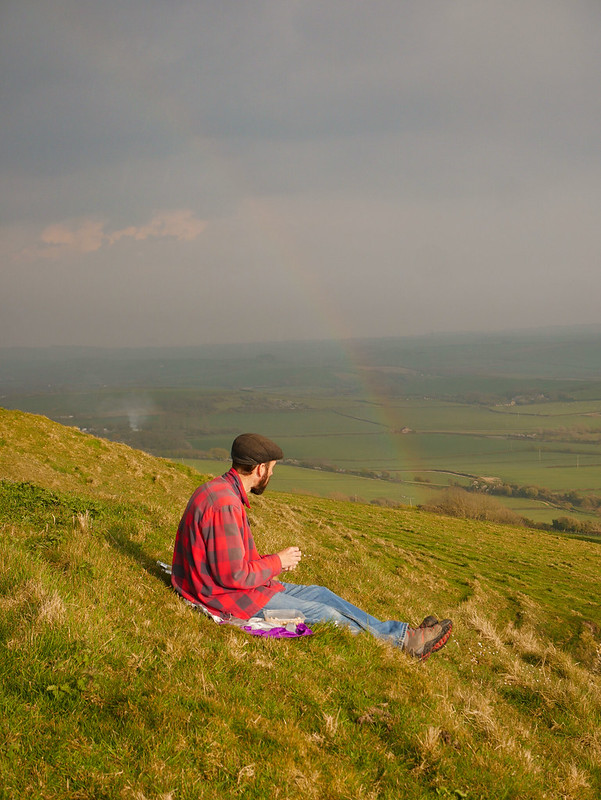 The following morning we headed out on another hike, following the footpaths across fields with vast views of the sea and a long stretch of sandy beach. The trail led us down to Abbotsbury, a traditional English village where the houses had thatched roofs and little cupboards outside housing the owners homemade jams and chutneys. 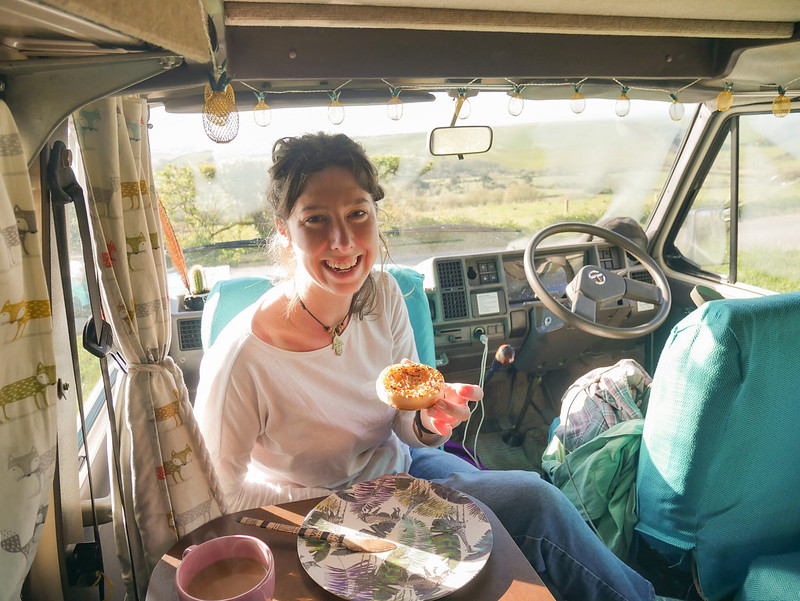 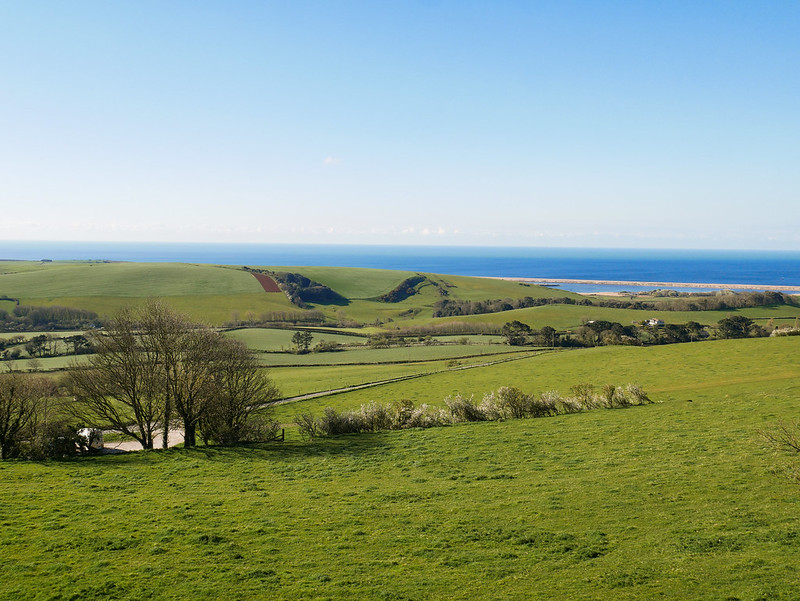 A steep path led us up a hill where an old church looked down on the beach and then we took a different route back to the village. We crossed a gurgling stream where we passed an older couple. They asked us how far away the church was and we pointed through the bushes to it, showing it wasn’t too far away. They thanked us and we continued on our separate ways, then Craig called back to them “probably about 15 minutes” and the man replied “more like 30 for us”. We were quite a distance away by this point so I figured the conversation was very much over yet Craig called back to them “if you’re lucky HA HA!” and a few seconds later the man said “if we’re fit enough HA HA HA!” We wandered up a lane giggling about how it was the never ending conversation. 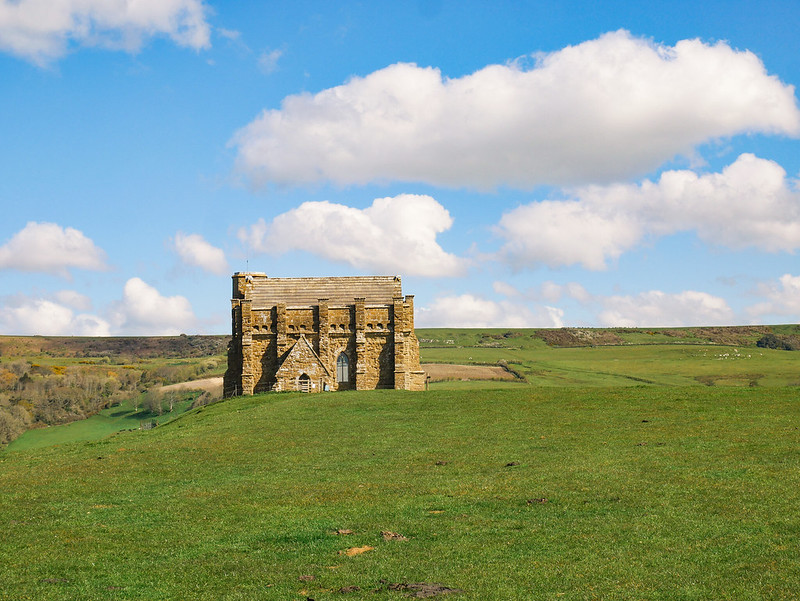 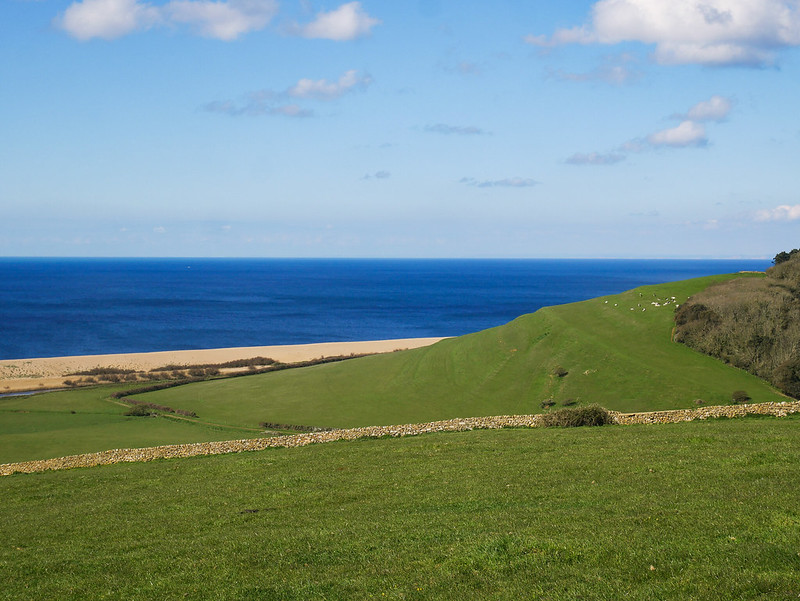 When we left the area I managed to send us down the wrong route which meant we couldn’t get any momentum for the huge hill ahead of us so we plowed up at a whopping 10mph with a queue of cars behind us. We did another coastal hike to Golden Cap which marks the highest point on the south coast at 191m. It wasn’t the most thrilling hike but we did get a view of a massive cliff-collapse which had happened just the day before. The rocks and rubble spewed across the beach and into the sea. 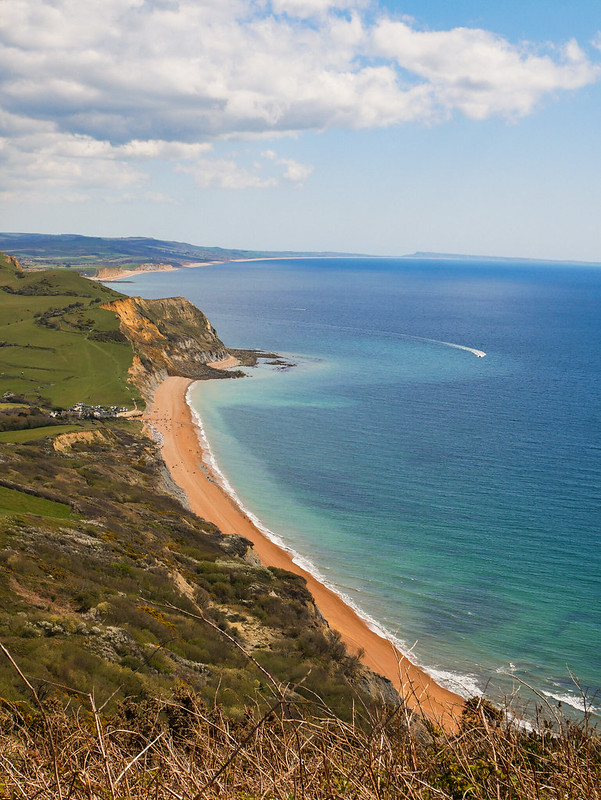 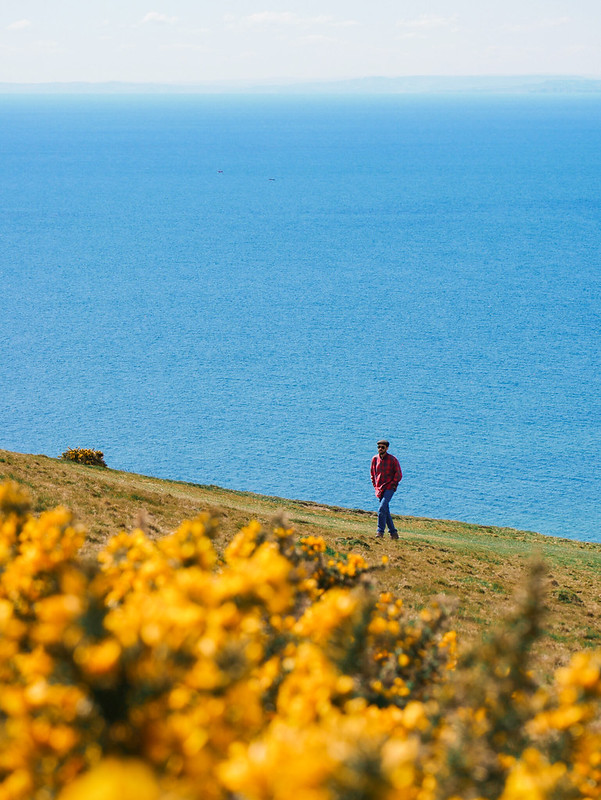 There was a farm shop in the carpark which I suggested popping into to buy a sweet potato for dinner. We wouldn’t normally go to a farm shop as they can be very expensive, but all we needed was a sweet potato so we firgured it wouldn’t break the bank. There was a price tag per kilo for the produce but no scales to check it so I nervously went up to the jolly cashier. He seemed to find it very amusing that I was buying a sweet potato on its own and made a comment along the lines of “just this one sweet potato?….I won’t ask ha haaaa haaaa!” Then he said “that’ll be £1.54 please” and I almost choked on my own saliva. I was wondering if I should come up with some sort of plan and pretend I’d forgotten my wallet and go back to the van, but then we’d start the engine and speed off like Bonnie and Clyde. But instead I paid for the damn thing and vowed to stay away from farm shops. That night Craig prepared the sweet potato for dinner, slicing off the unusable brown end and saying “well that’s 20p of it wasted”. 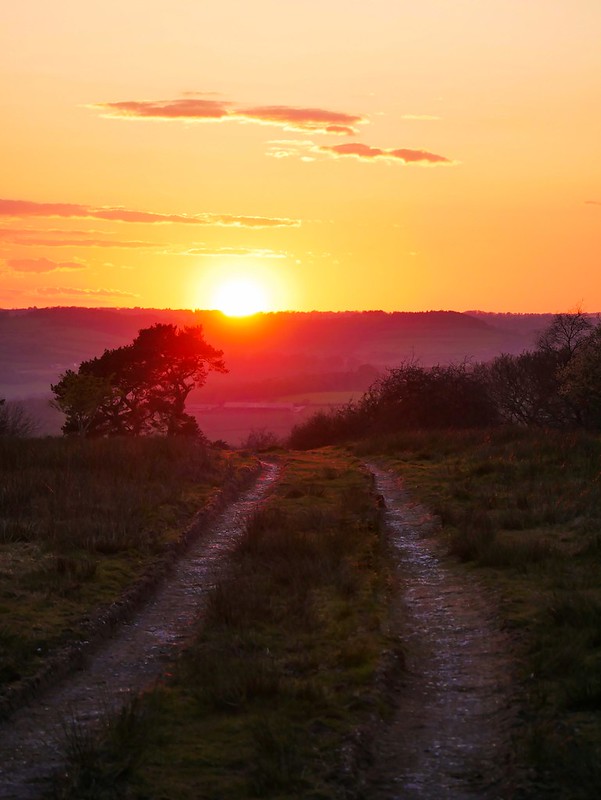 After a couple of days exploring Dorset, we made a beeline for Devon, a region we were yet to explore. Craig’s brother lives on the Devon/Somerset border so we planned to visit him and his family for a couple of days. The narrow lanes leading to the village had more tractors on them than cars, but it was a beautiful area in the countryside with rolling hills dotted with freshly born lambs. 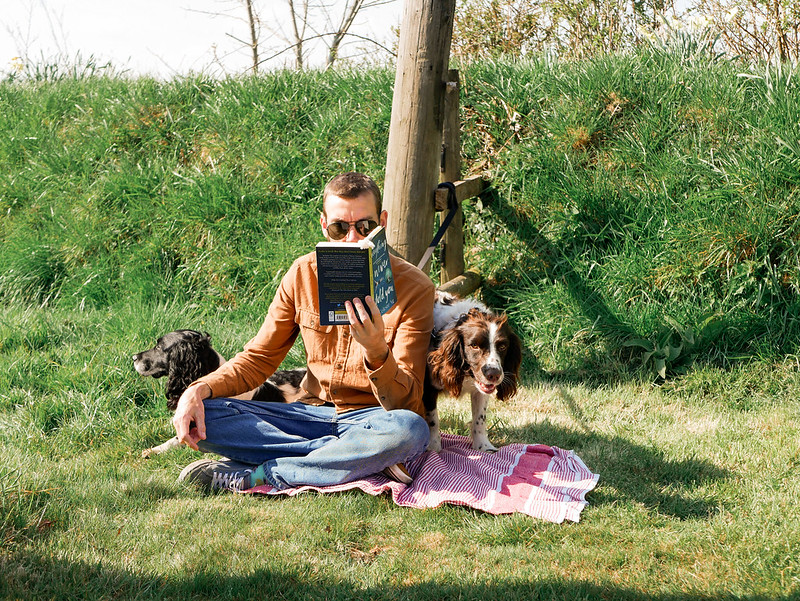 We were able to park Helga in a lovely spot with a view of the sheep and the occasional group of Indian runner ducks wandering past us with their heads high in the air like they were constantly trying to view something out of sight. We were taken on a lovely walk along the hills where we met a group of wild ponies who confidently galloped towards us in a rather intimidating manner. 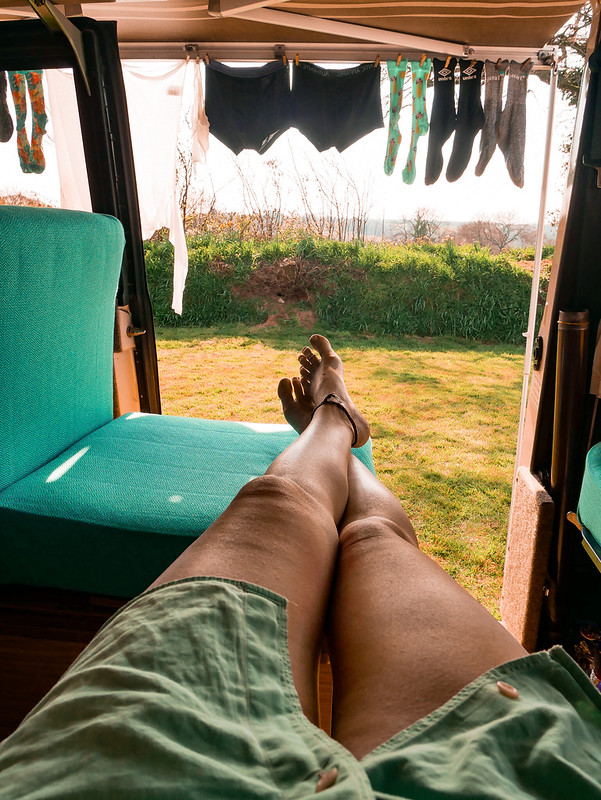 The following day we were shown a beautiful woodland area where some random camps had been built. One had a large fire pit and tree stumps around it to sit on so we stopped there for lunch and grilled some sausages. One of Craig’s nieces had a fall but brushed it off like a trooper, until she was out of sight and shed a little tear at which point her parents offered a Refresher sweet and the tears instantly dried up and were swapped with a big smile – the power of sweets ay! Further down the woods were a collection of tall trees and rope swings, something Craig can’t resist. He did a big run up and then glided through the air, rapidly making his way towards some trees at which point he called out “oh shit” and then all we heard was a loud bang – the sound of his body slamming into the tree! He swung back around, barely clinging onto the rope anymore and quickly stopped to check out his injuries. Craig doesn’t get any sympathy from me when he does things like this so I smugly shouted out to him “do you want a Refresher?” 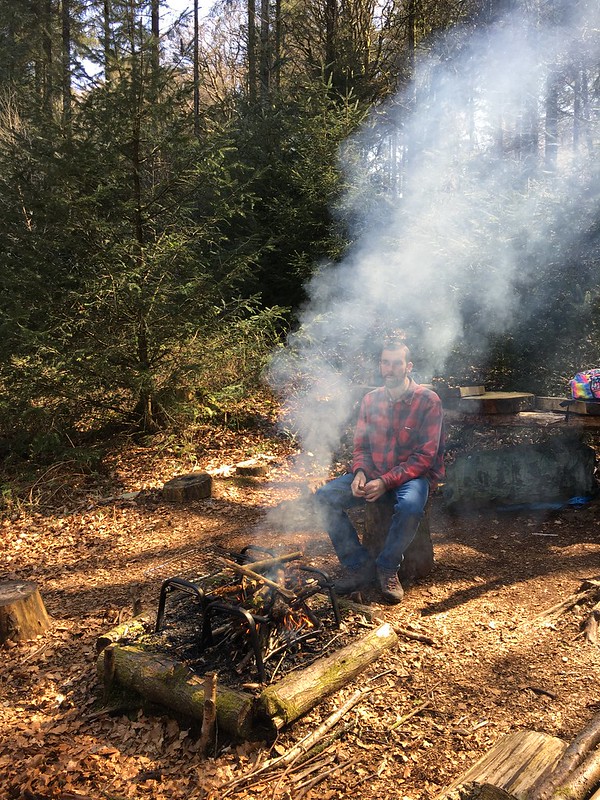 After a couple of lovely days catching up with family it was time for us to properly start the roadtrip and see some new sights so we’re off to Exmoor National Park now.