Our alarm went off at 6am and after a few snoozes we reluctantly peeled our heavy eyes open. What a terrible night sleep that was, the wind made it feel like our we were in one of those plane simulators, rocking around in turbulence. As much as I wanted to lie in bed all day our holiday was cut so short that we had to make the most of everyday – and that meant witnessing every sunrise! The weather cleared up beautifully after the storm and we ended up finding a fantastic viewpoint just a few kilometres away. It was bitterly cold outside so Craig watched from the van while I followed a little trail to get the best photo angle. Below us was a vast patchwork of green pastures, home to sheep and farmers barns. In the distance we could see the sea, and that’s where we wanted to head today. 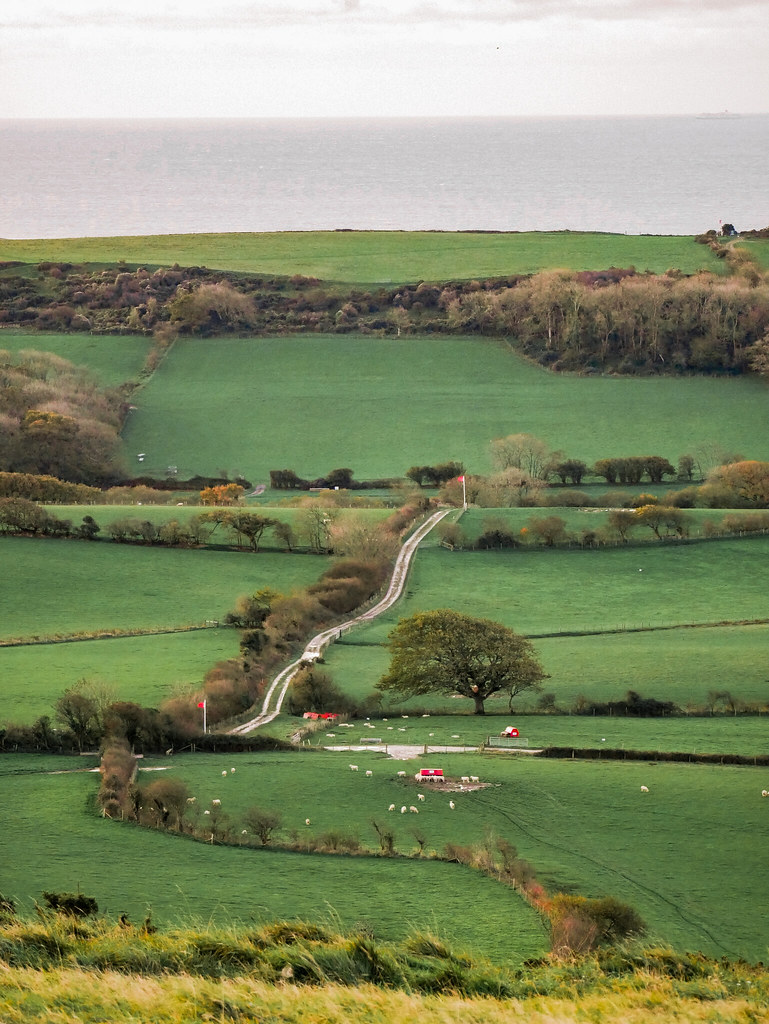 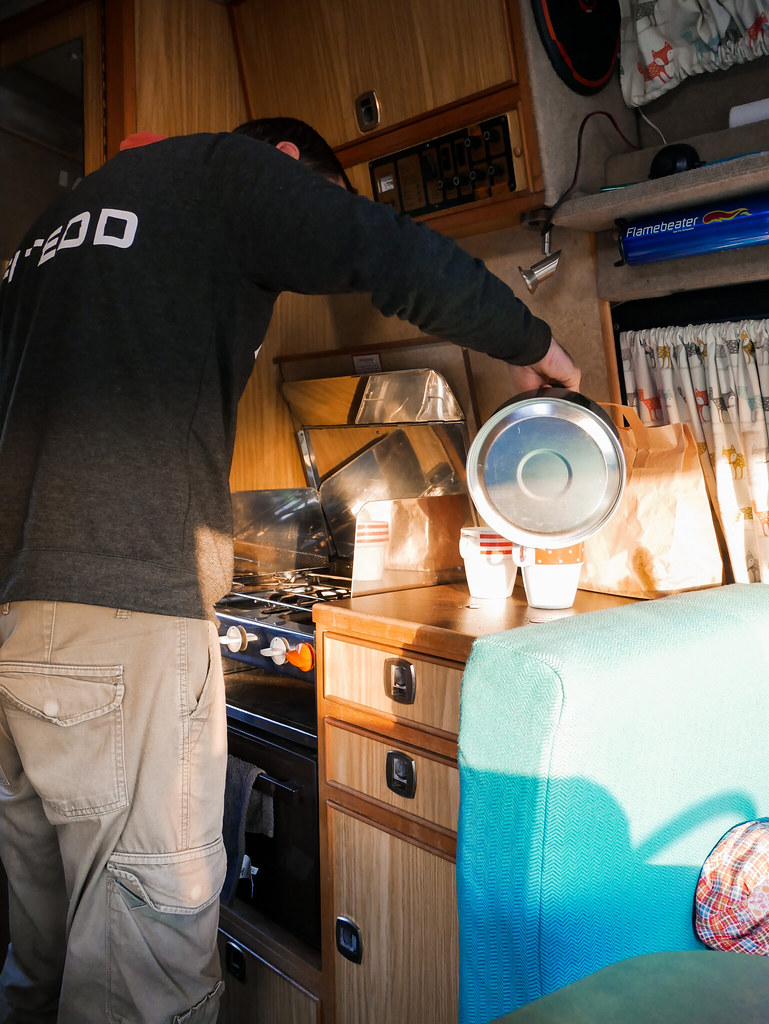 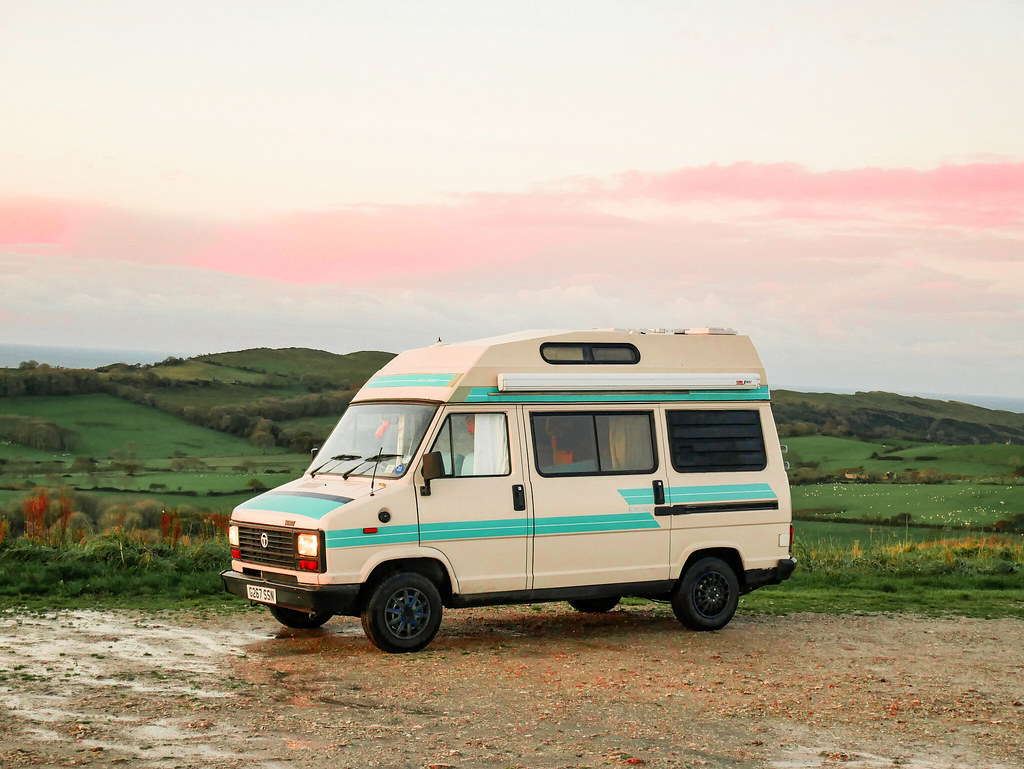 After the sun had pierced above the horizon I headed back to Helga to warm up. Craig had been busy putting the bed back into ‘sofa-mode’ and making some hot porridge and fresh coffee. After a lazy breakfast we were feeling a little more awake and set off on some more narrow roads until we arrived at Lulworth for a hike. 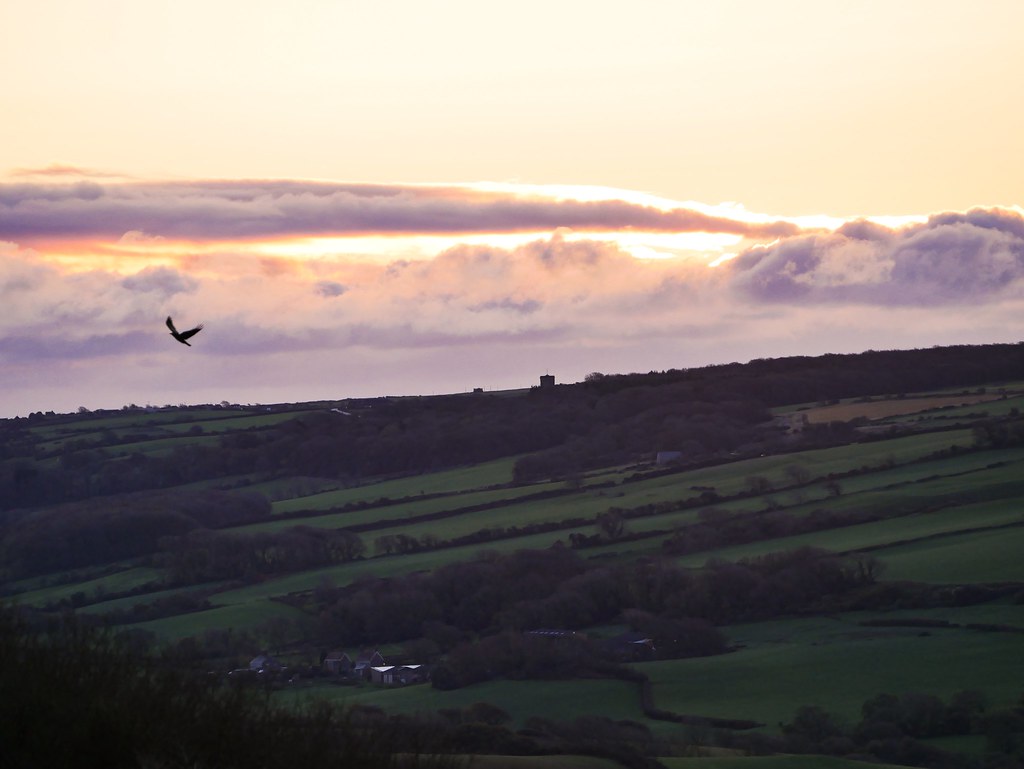 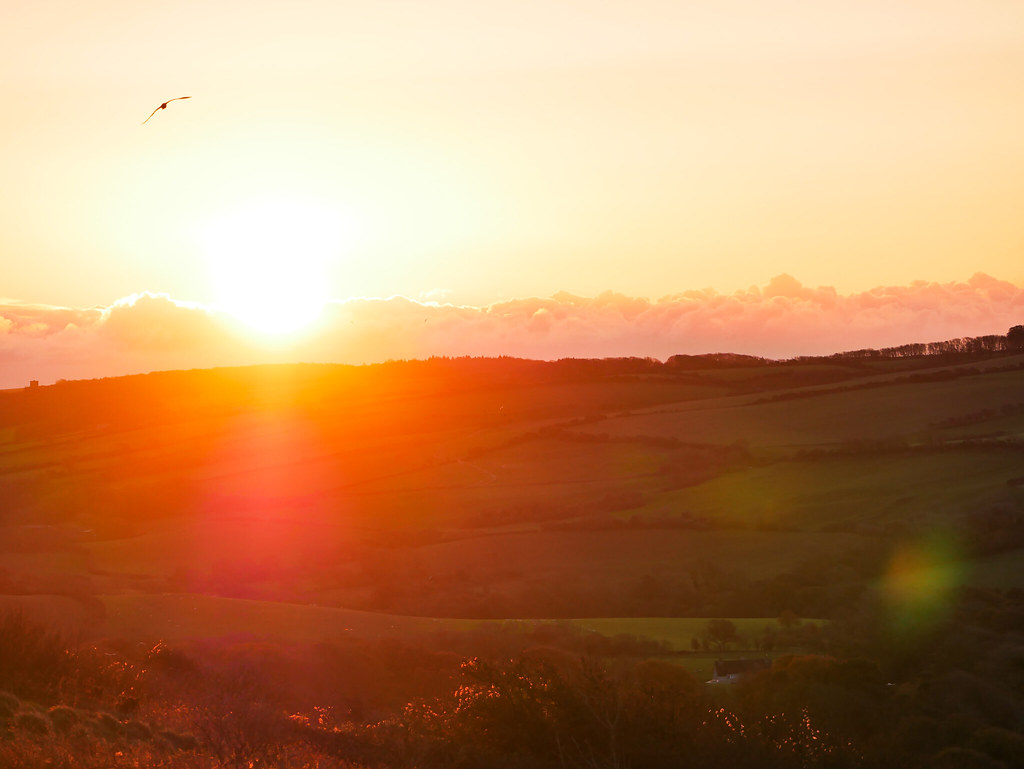 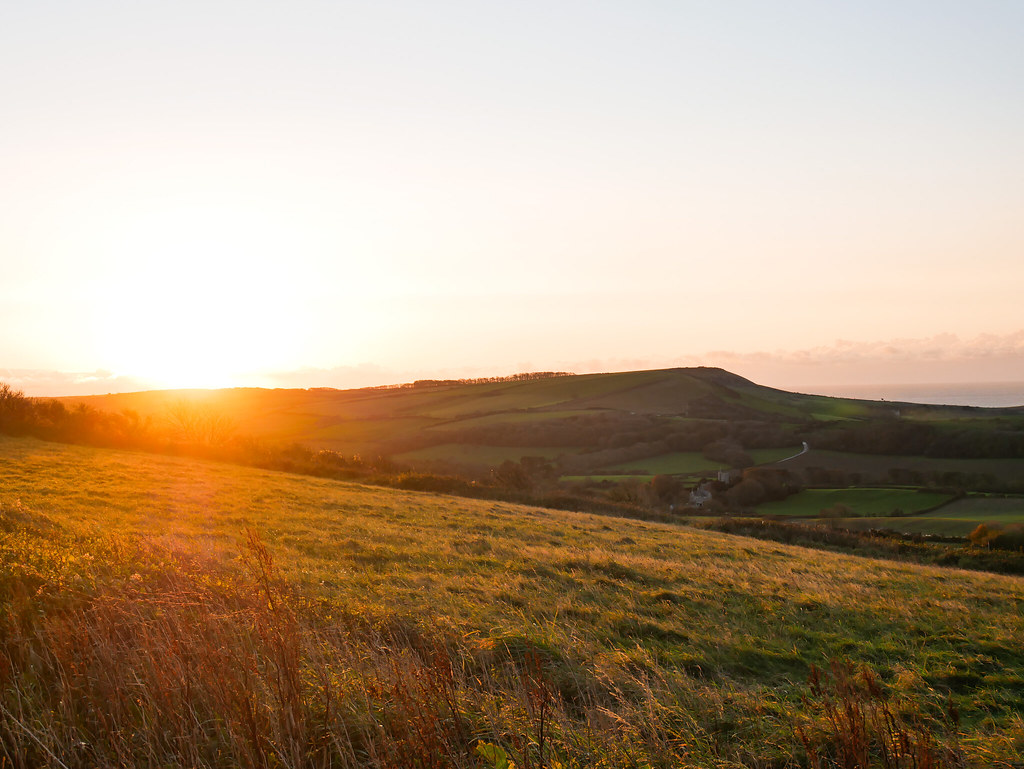 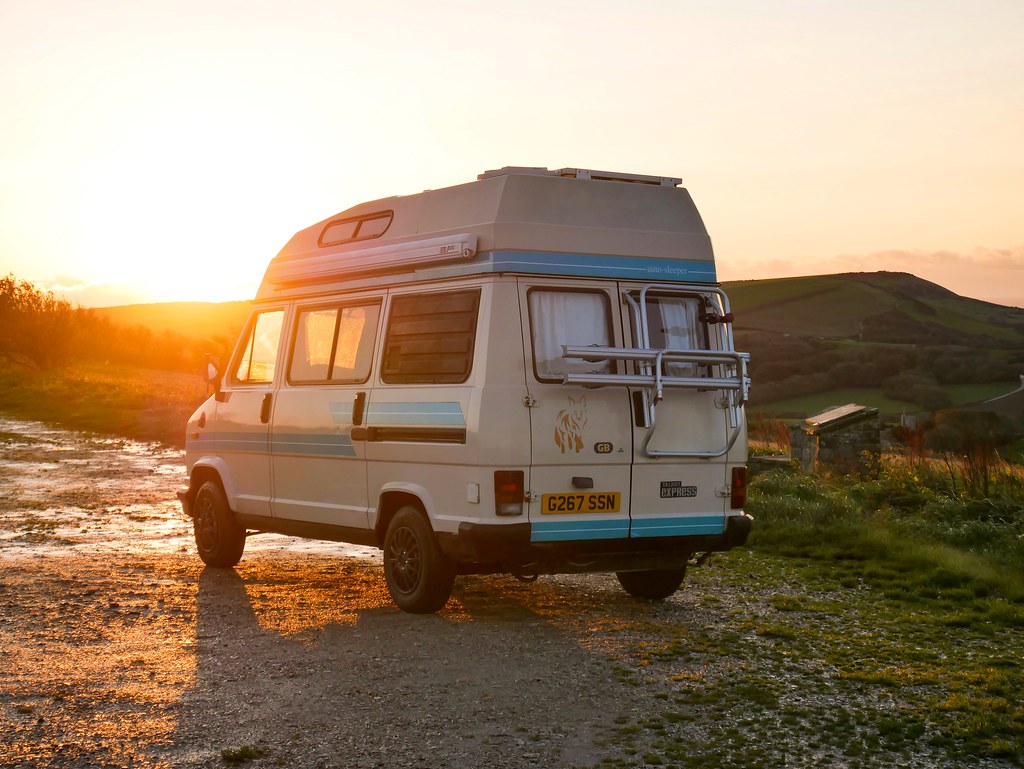 With some unexpected rain we began hiking a hilly slope which eventually led us back down to the coast. It felt so good to be by the sea. The trail was up on a cliff top and we had a view down to a pretty cove where the waves ebbed and flowed, creating beautiful patterns on the shingle beach. The next bay along was home to the iconic Durdle Door, an impressive limestone arch. We followed some steps down to the beach where we could admire the water sloshing through the arch. 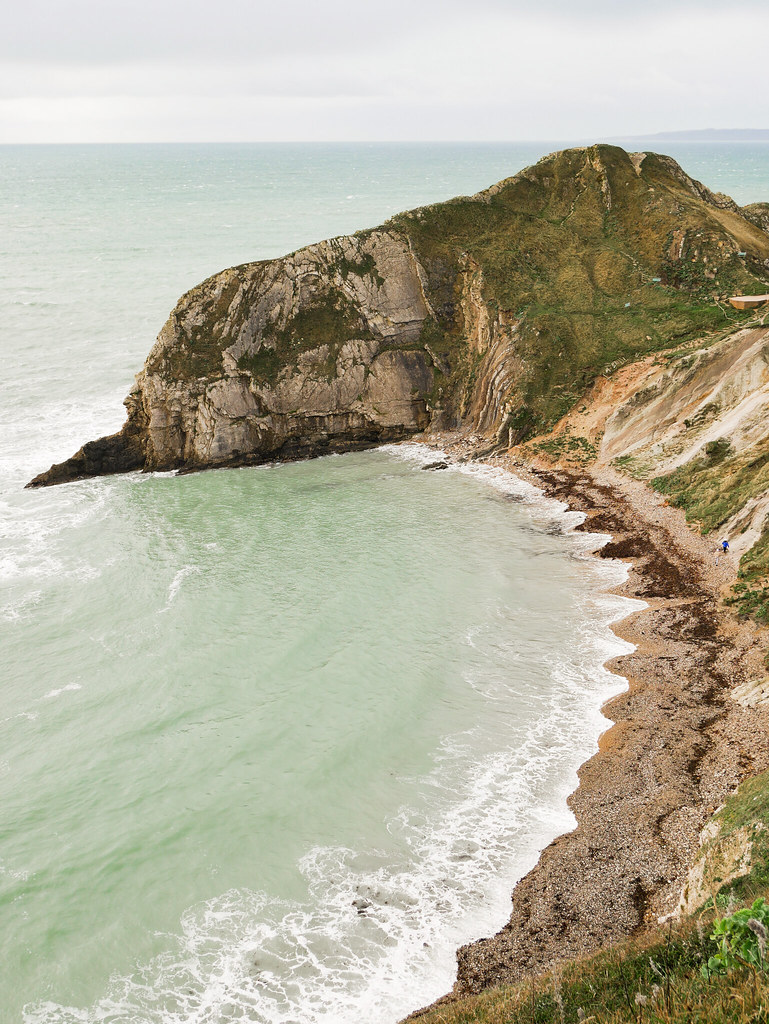 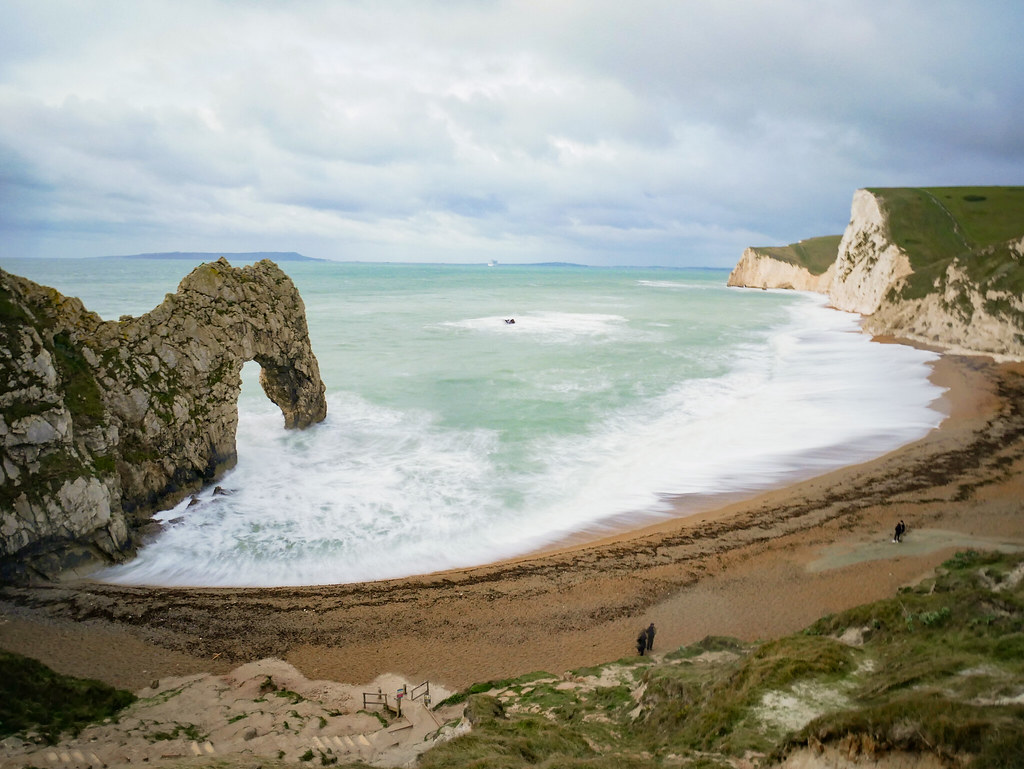 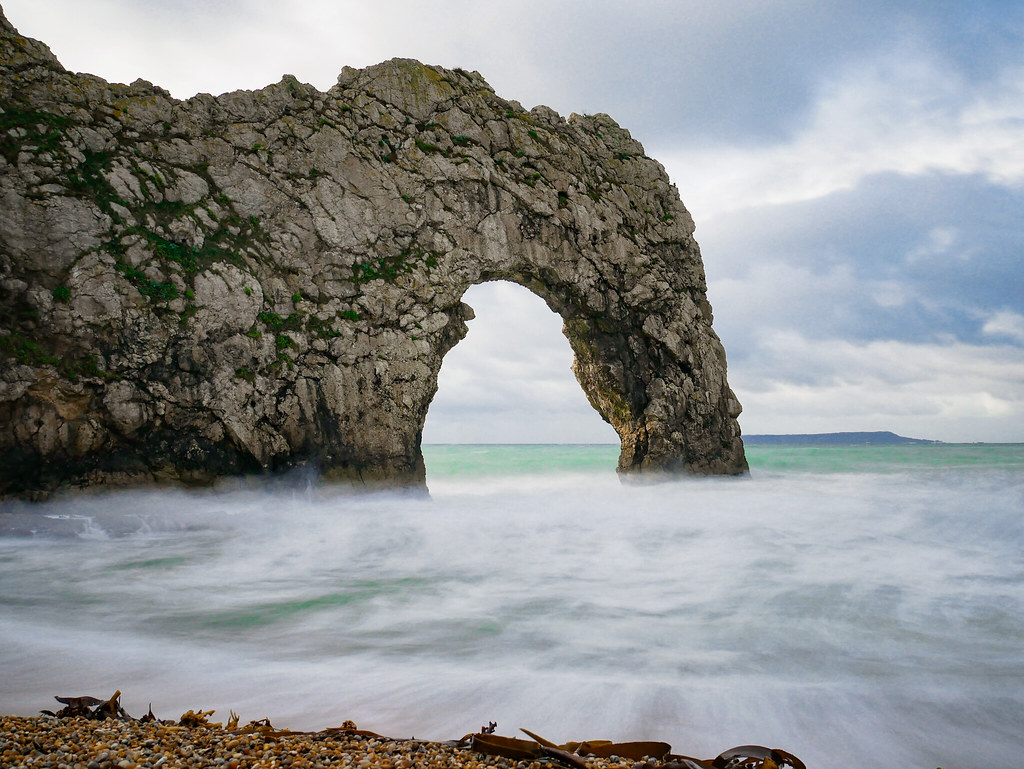 Our hike continued along the cliffs above the beach and then we could see tiny figures on the steep grassy hill ahead of us. Before we started the incline Craig stopped at a signpost and began frantically itching his butt cheek. Obviously I asked what the fuck he was doing, to which he darted his eyes in the direction of the signpost and continued itching. I looked over and it said we were at ‘Scratchy Bottom’. Oh Craig! 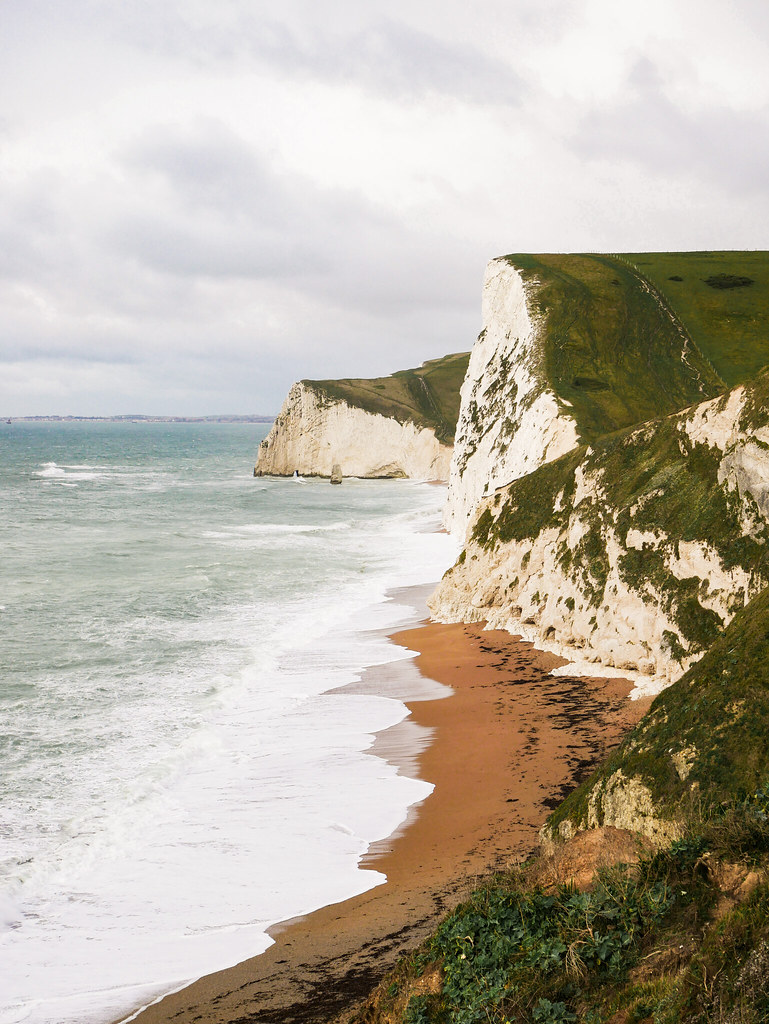 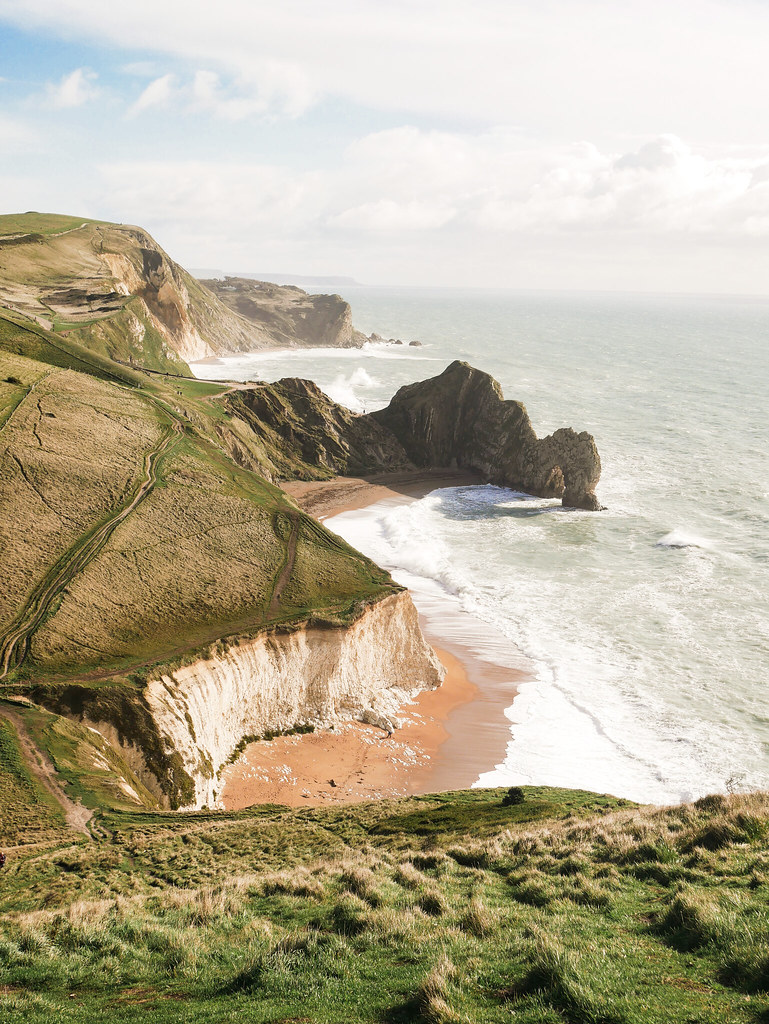 It was a bit of a slog up the hill but the views were fabulous looking back down where we’d come from, and the weather had drastically improved. When we got back to Helga we decided to drive to a more scenic spot for lunch, which was more challenging than we expected. In the end we found ourselves in a little lay-by beside some farmers crops. 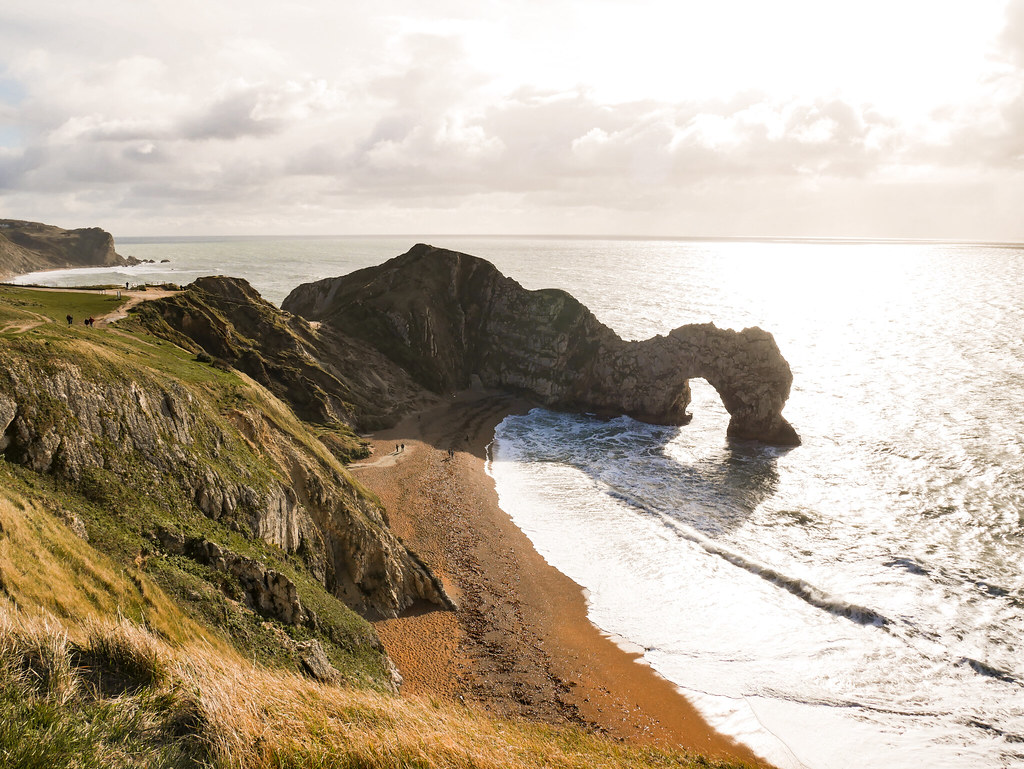 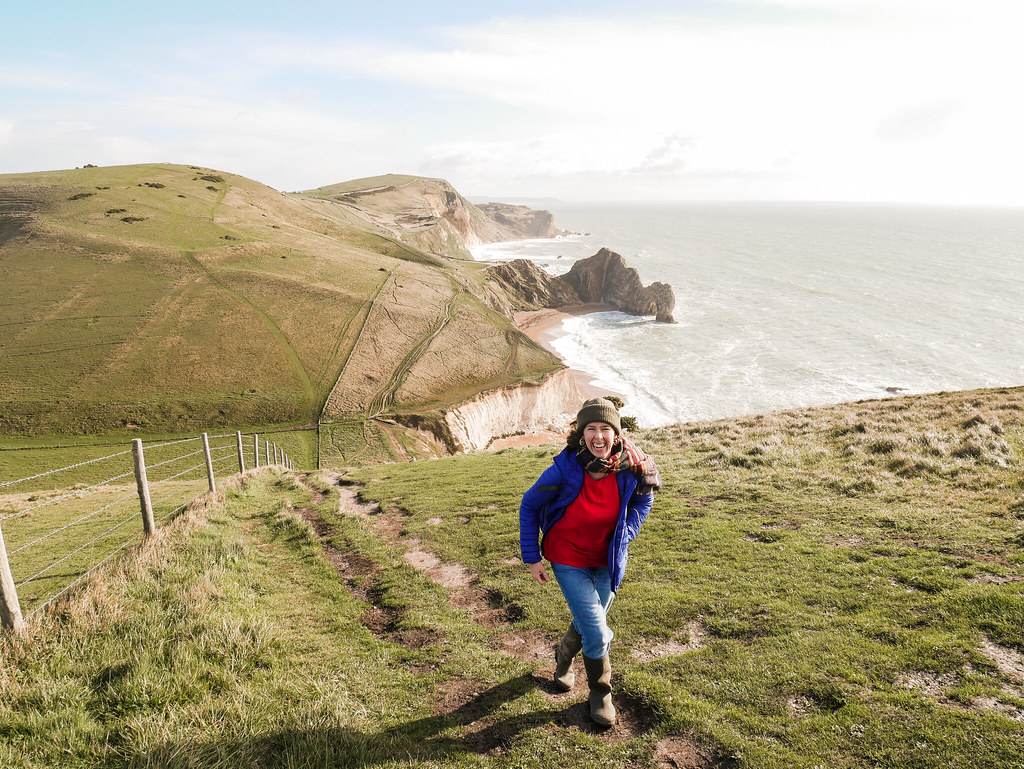 We couldn’t help but notice the van creaking while I was moving around making lunch. The handbrake was one of the main jobs the mechanic said needed fixing so it was very unlikely that the handbrake was failing already…..unless he forgot to fix it? Suddenly we felt motion – the van was rolling forward!!! I was sat behind the drivers seat so it would of made more sense if I dashed into the front and slammed on the brakes but A) I haven’t driven in so long that I don’t know if I would remember the brake from the accelerator and B) it all happened way to quickly for me to act. Thankfully Craig managed to rush into the front and shove the brake down. In doing so he headbutted the top bed, scraped his leg on the front panel and sat on his lunch plate which had squidgy chickpeas left on it. Turns out there were so many bits that needed fixing on the van that our mechanic forgot to actually do the handbrake! So now we have to park in the flattest spot and shove a wooden block in front of the wheel – which we just so happened to find under the drivers seat, so cheers to the previous owners who clearly knew the van had a fucked handbrake but didn’t think to tell us…to prevent a goddam crash or something! 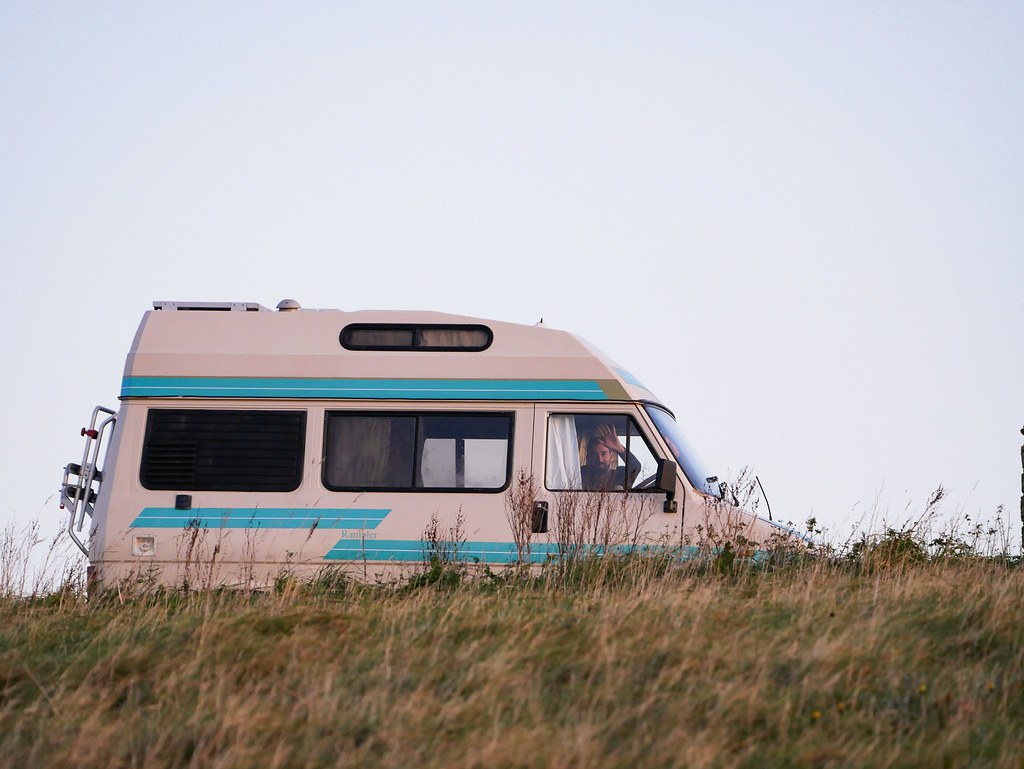 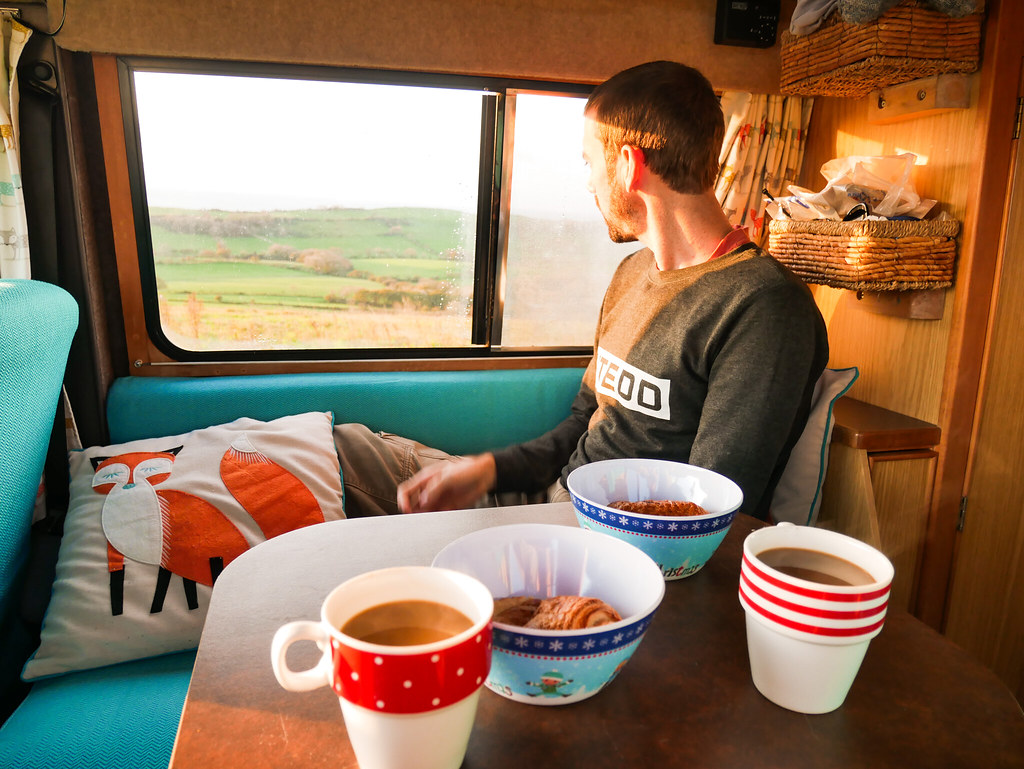 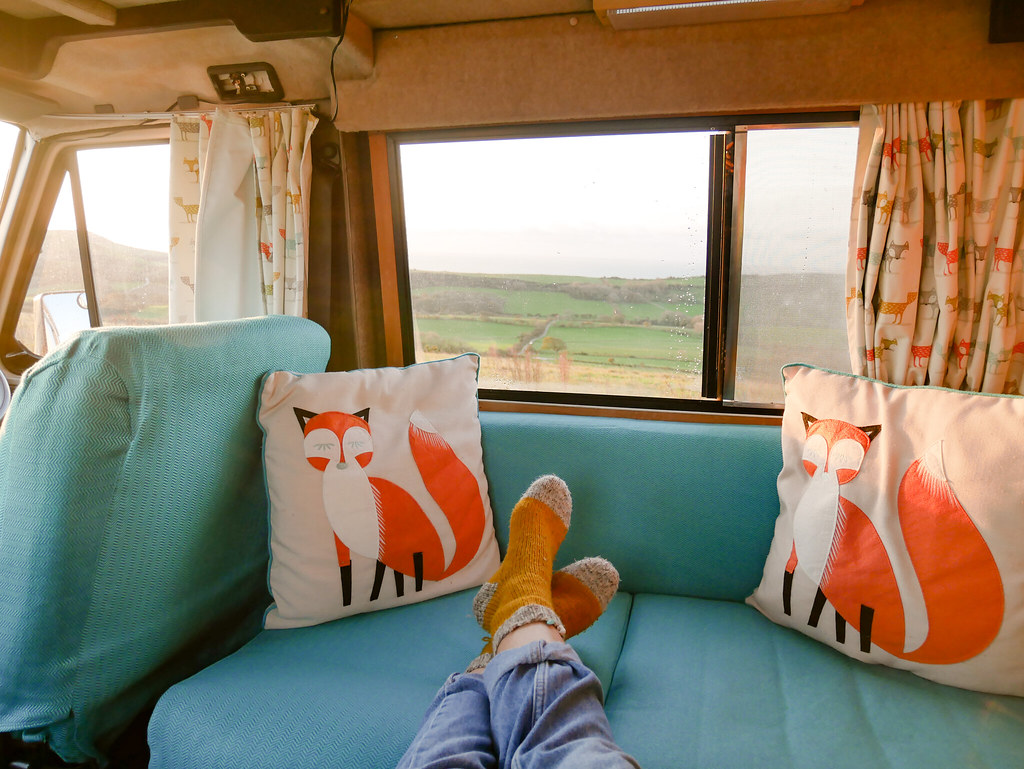 Anyway, after that drama I began searching my map for our next destination. I found out there was a village nearby which was evacuated in WWII and has been deserted ever since. Sadly we discovered it was within the closed off shooting range for the military and it was only open on weekends. Luckily for us a very jolly chap I called at a nearby information centre recommended a great little hike for us to do instead.

We arrived in the quaint village of Worth Matravers where all of the cottages were made of limestone and set around a little pond. A trail led us down to the sea where there was a disused stone quarry. The shrubbery was taking over the stones and gave it a very tomb raider vibe. Craig decided to head inside the manmade opening into the cliff and managed to spot a couple of fossilised shells on the rock wall. There were huge pillars of stone left in place to help stabilise the ceiling, but not enough of them to make me feel safe to stroll underneath.

Our trail continued along the coast line with pastures on one side and the sea on the other. We were walking right towards a storm but the sun was getting ready to set directly behind it which created some beautiful sun beams. We got to a scenic spot so I began taking photos of Craig with a backdrop of the dramatic sky. When I walked back over to him he excitedly said I had to take a photo of the toadstool! He ushered me down some rocky steps and I was peering across the ground, looking for a little mushroom. He asked me what I was looking for and I said the damn mushroom, to which he replied “it’s right there…”. Ahead of us, close to the cliff was a ‘toadstool’ shaped rock…a lot bigger than what I was looking for! 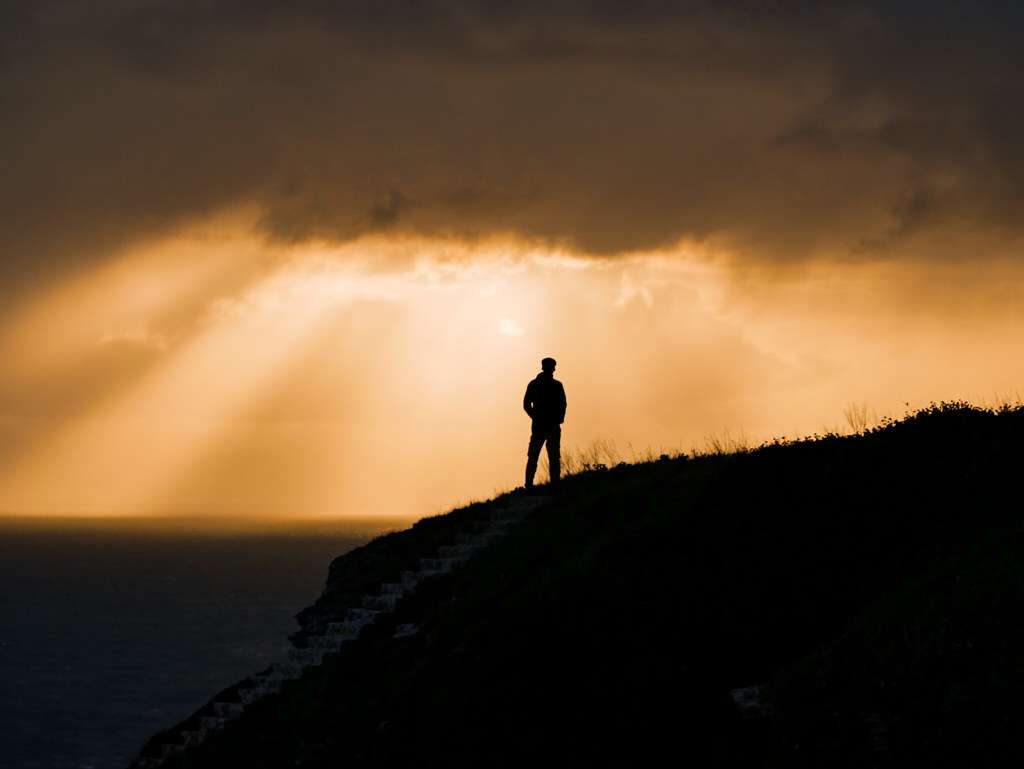 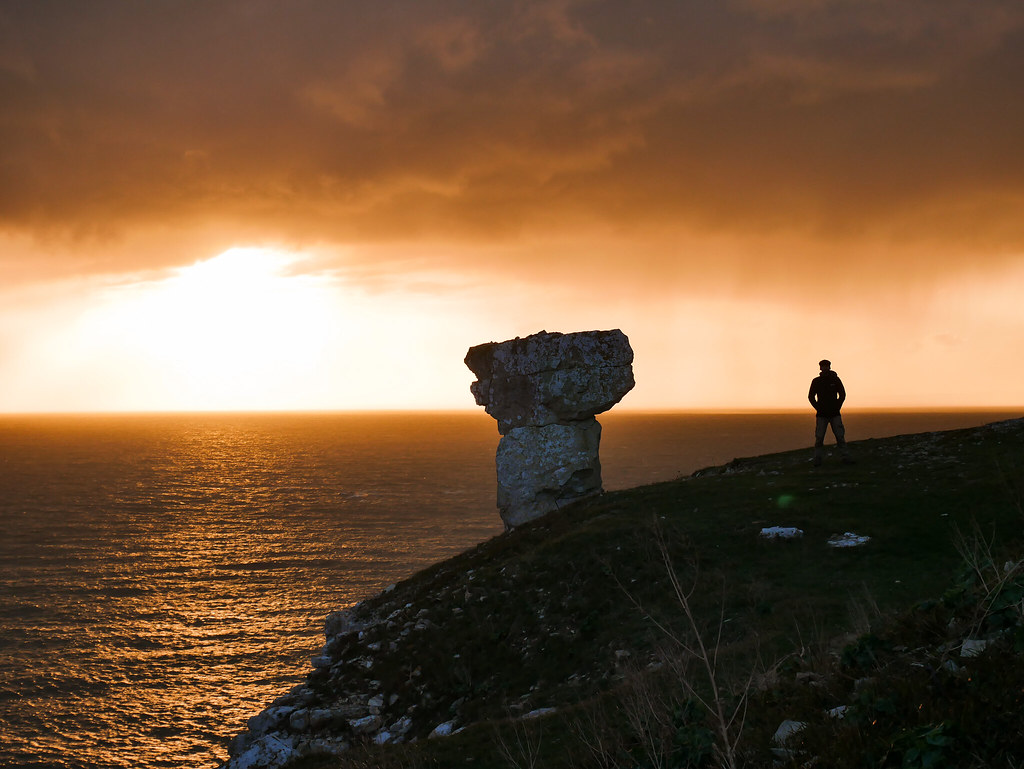 The sky was beginning to turn a golden yellow colour as we arrived at the headland. There was an old stone chapel and a coastguard watchtower being manned by a jolly volunteer. The black storm cloud was continuing its very rapid journey towards us. Before we knew it the wind was battering us and rain began falling, yet the sun was still shining which meant we were treated to an incredible show. The gloomy clouds began blushing pink, a golden mist rolled in across the sea and a vibrant rainbow appeared. It was magic! I couldn’t stop smiling – in fact I’ve always said stormy skies at sunset are my favourite thing. Even the rain was pretty, the sun was catching each drop, making it look like glitter falling through the sky. 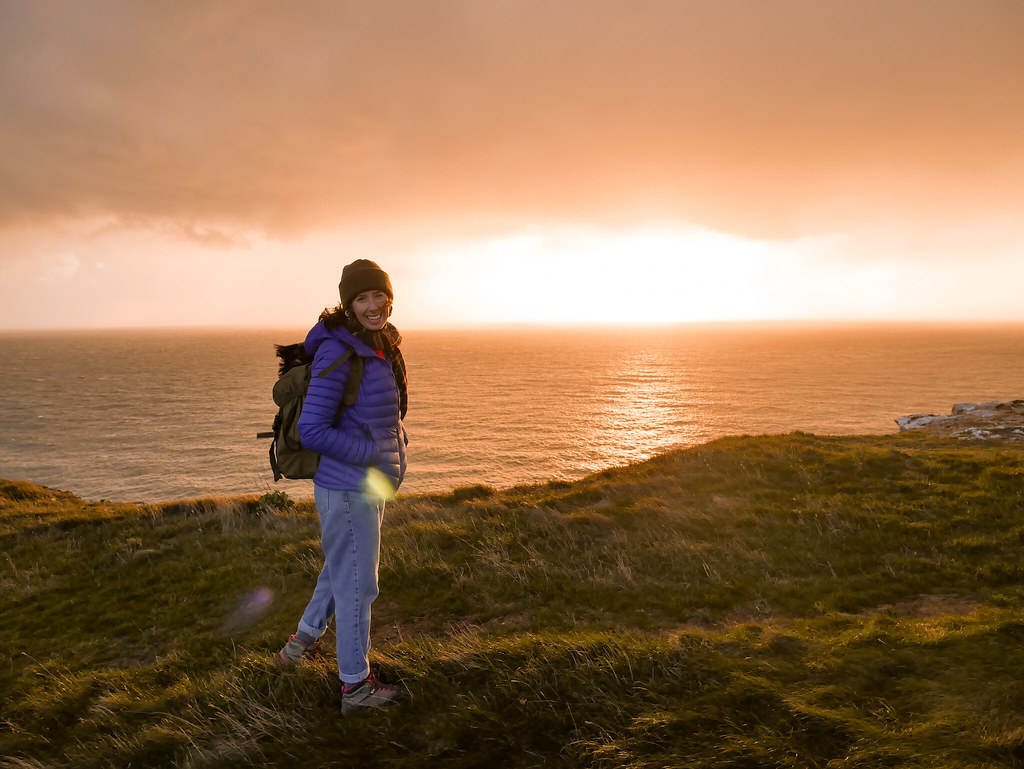 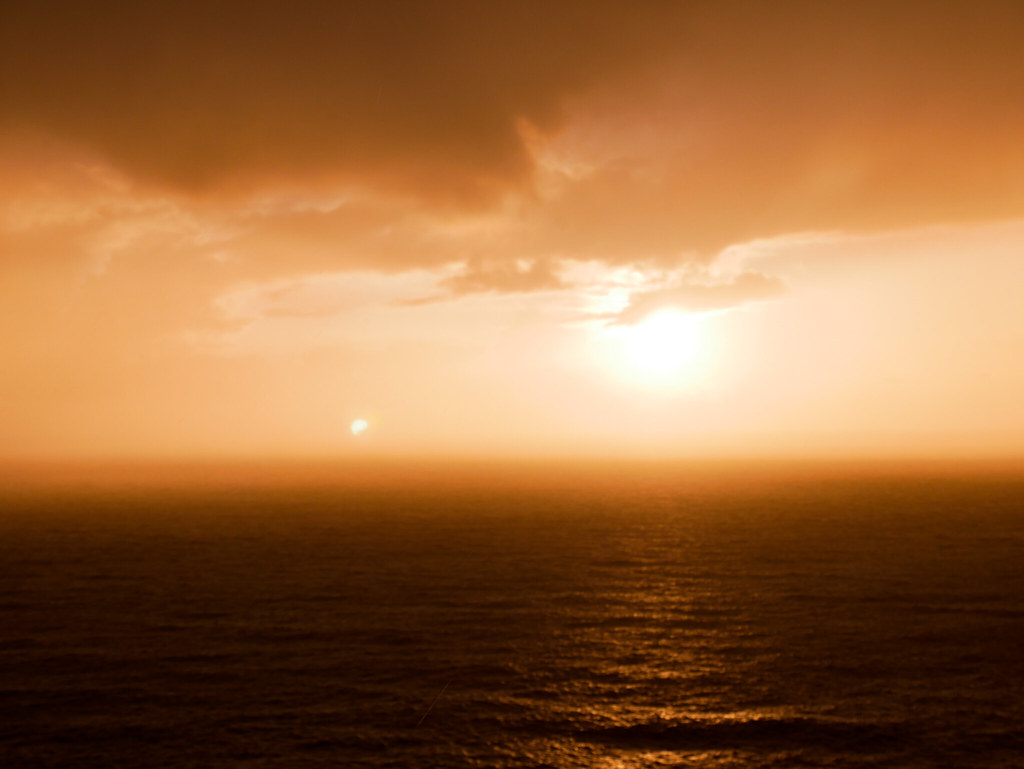 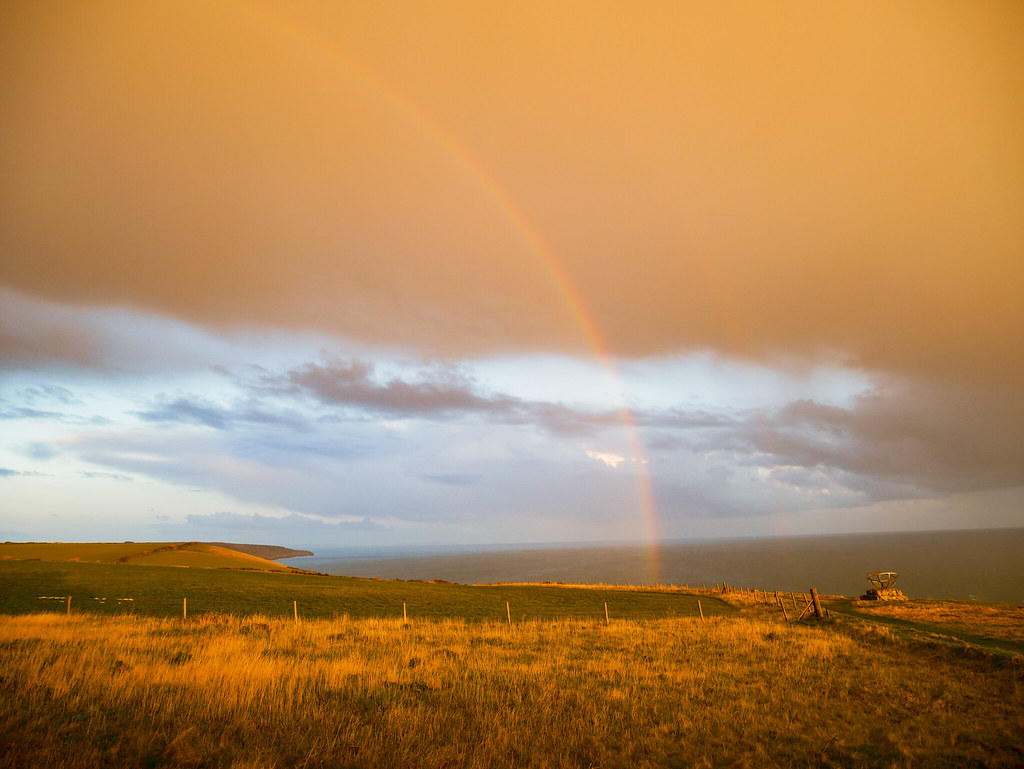 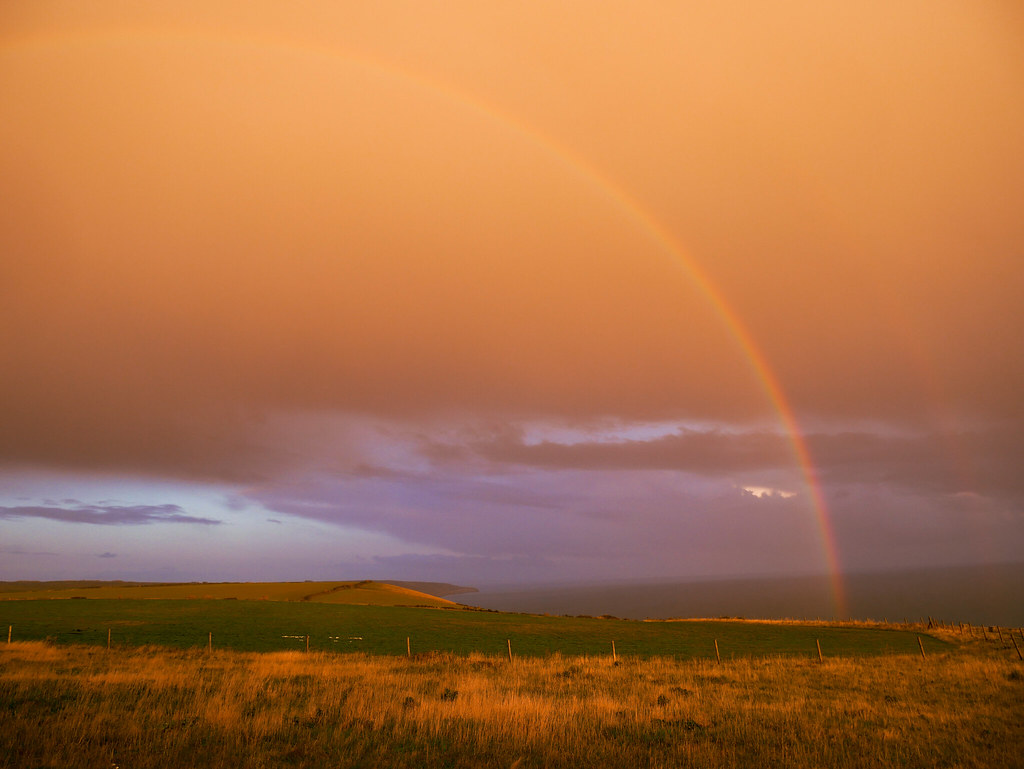 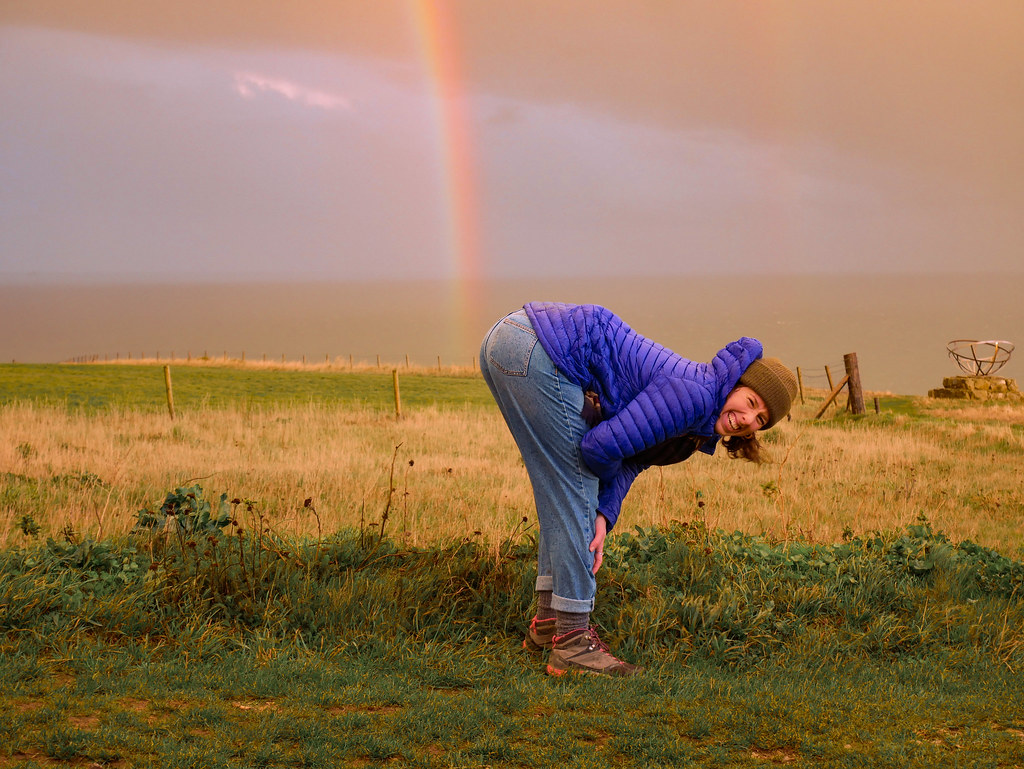 Before we began the hour walk back to the village we checked out the little square chapel that had an eeriness about it with the mauve clouds as a backdrop. As we plodded home along the puddle-ridden lane the clouds above us were tinted with beautiful lilac and lavender hues. It really was a spectacular evening and we were at the best place possible to witness the show. 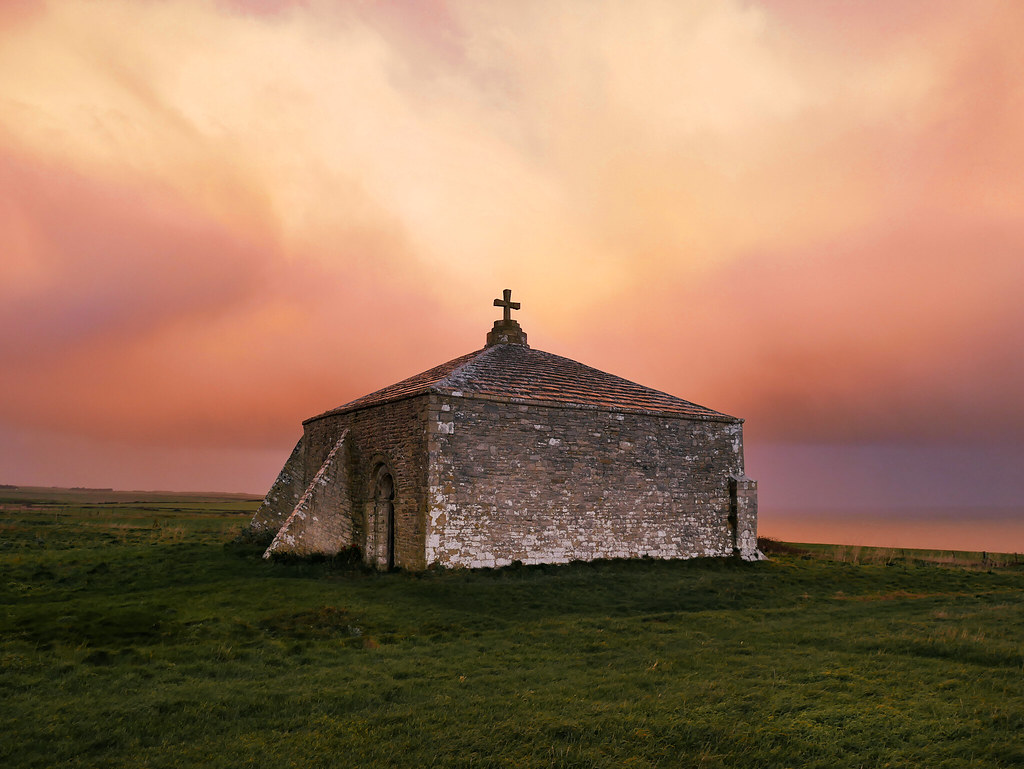 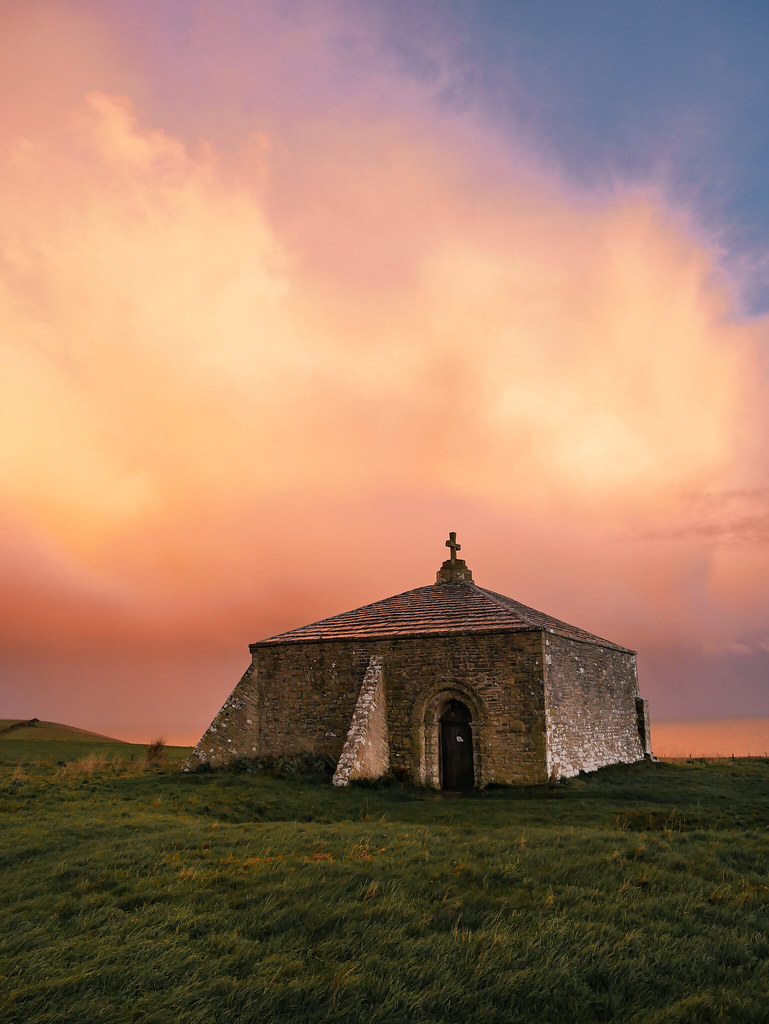 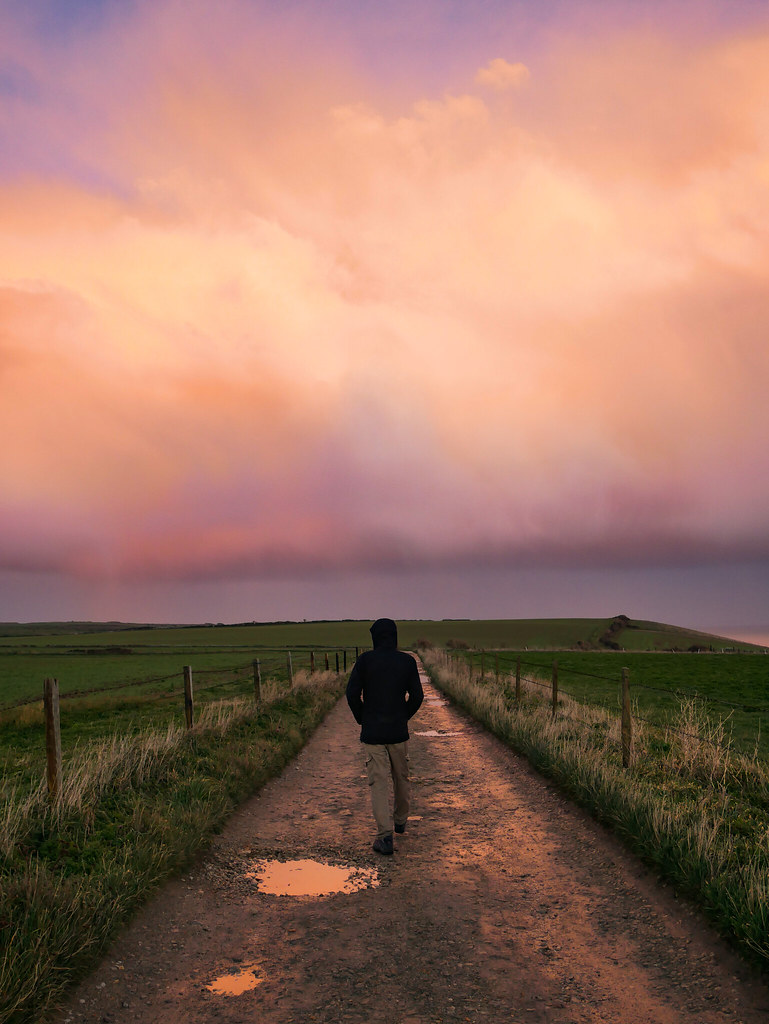 The only downfall of us staying to watch the sunset was that we now had to find a place to camp in the dark, which is never easy. Thankfully we found a little spot next to another camper at the start of a trailhead. It wasn’t the flattest spot so Craig parked us in gear and put some wooden blocks under our wheels. Even still, the van creaked every time we moved which was rather disconcerting, can’t wait to get this damn handbrake fixed! 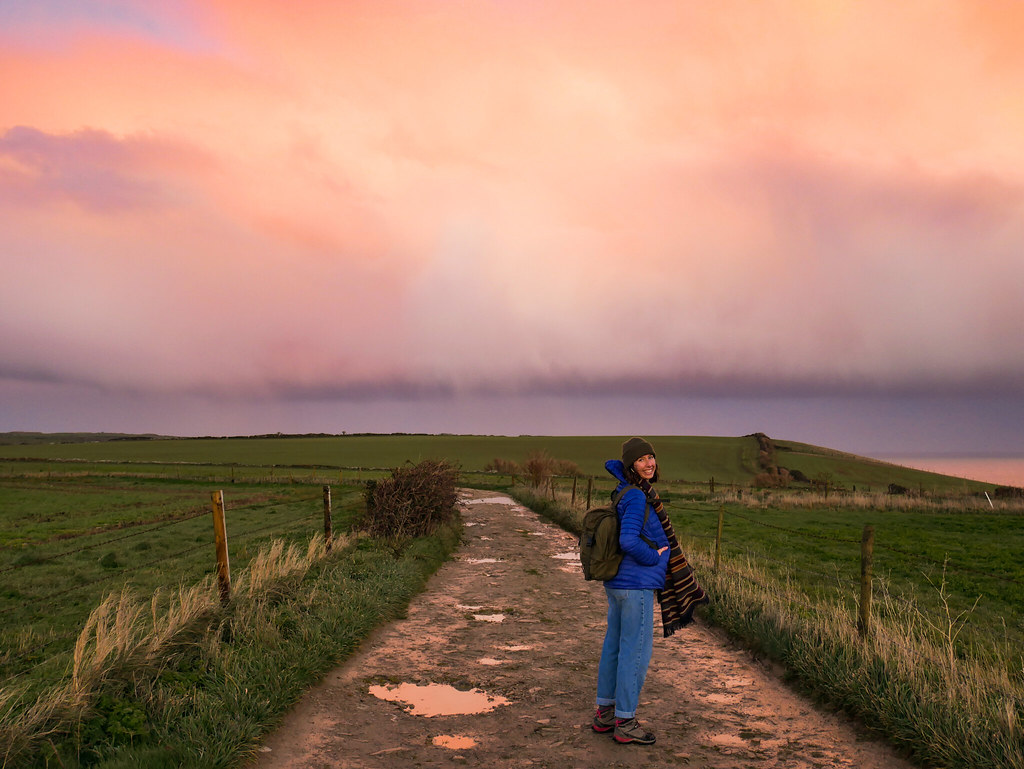 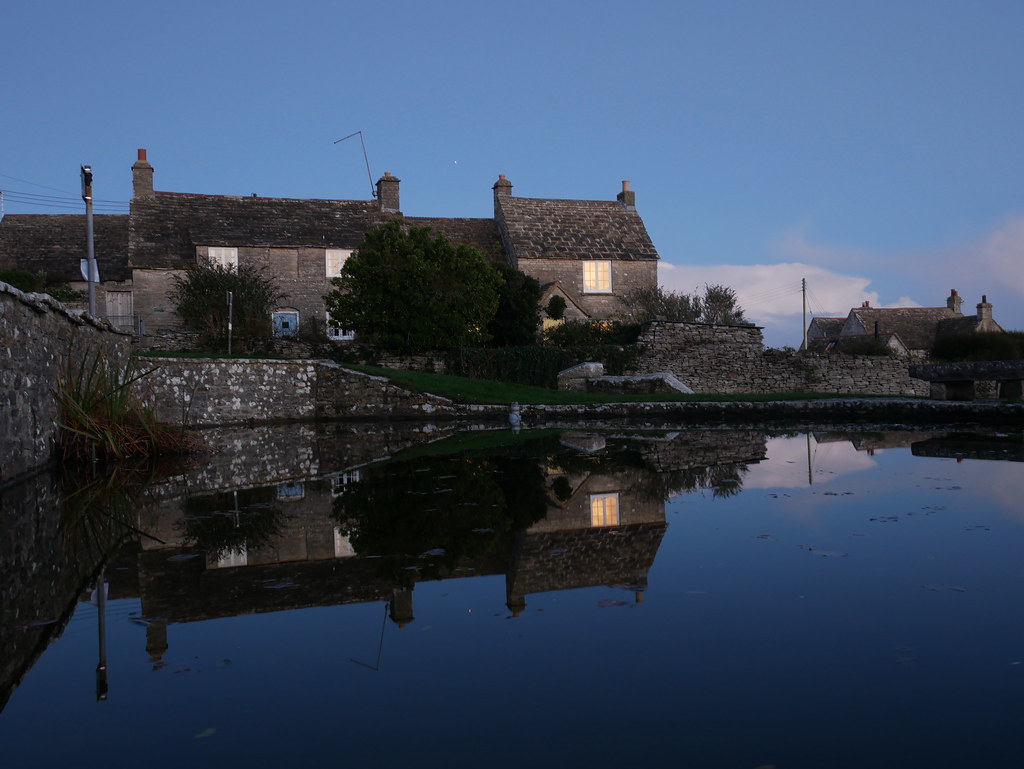 It was going to be a bitterly cold night and predicted to drop below zero so after dinner Craig decided he wanted to test the campervan shower. It was all going well until he covered himself in soap. After that he couldn’t get the right temperature and was standing in the freezing cold getting very stressy! He eventually managed to rinse off and to my surprise he asked if I wanted a shower. He didn’t exactly sell the damn thing, but he did say we’d try using our portable shower and pump so we could fill the sink with the right temperature water. I don’t even like getting undressed in a cold house before my shower so on this particularly cold night it was a bit grim. The good news is I had a nice hot shower and then we wrapped up under the covers and went to bed with the nerve-racking noise of Helga creaking every time I tossed and turned.