“Let’s play a game Lauren…guess how many cars are behind Helga?” I roared with laughter, it was our first roadtrip in our 30 year old campervan and I peered in my mirror to see a queue of cars. Moments later a couple of pensioners squeezed into what could only be described as a drivable bobsleigh overtook us…which just encouraged more laughter.

We were on our way to Dorset, originally for 9 days but then lockdown 2 came along and we had to cut it down to just three days. Our first stop was the New Forest National Park and we were so excited to be somewhere different, our home town has become a rather monotonous place to live for a full year. 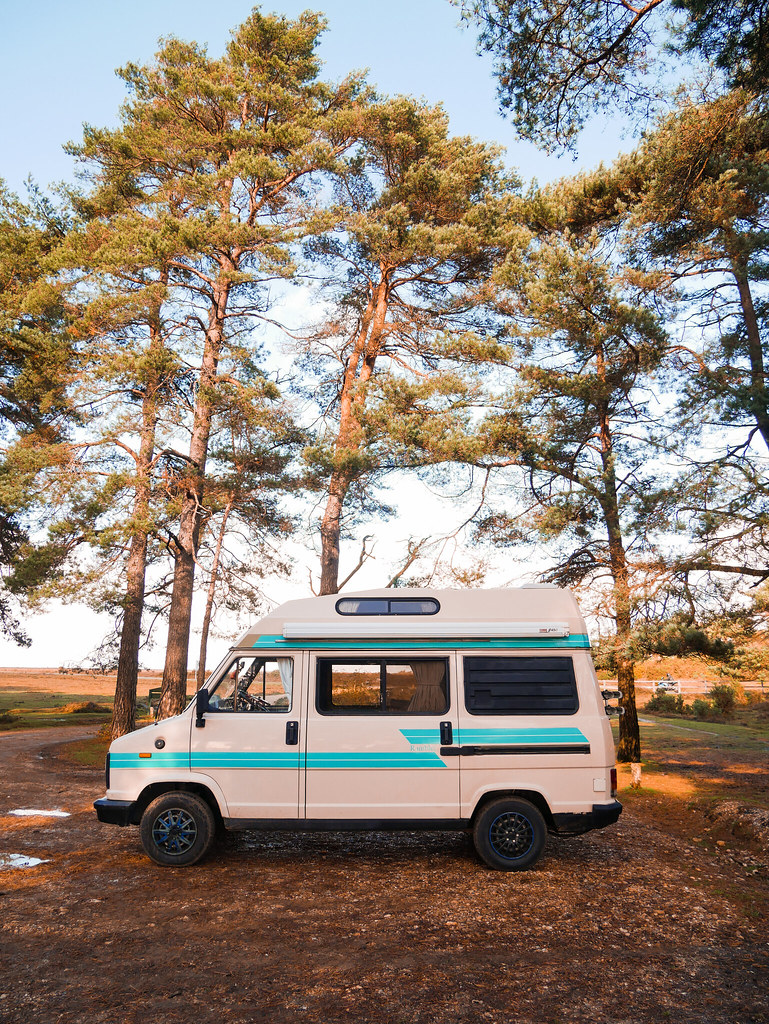 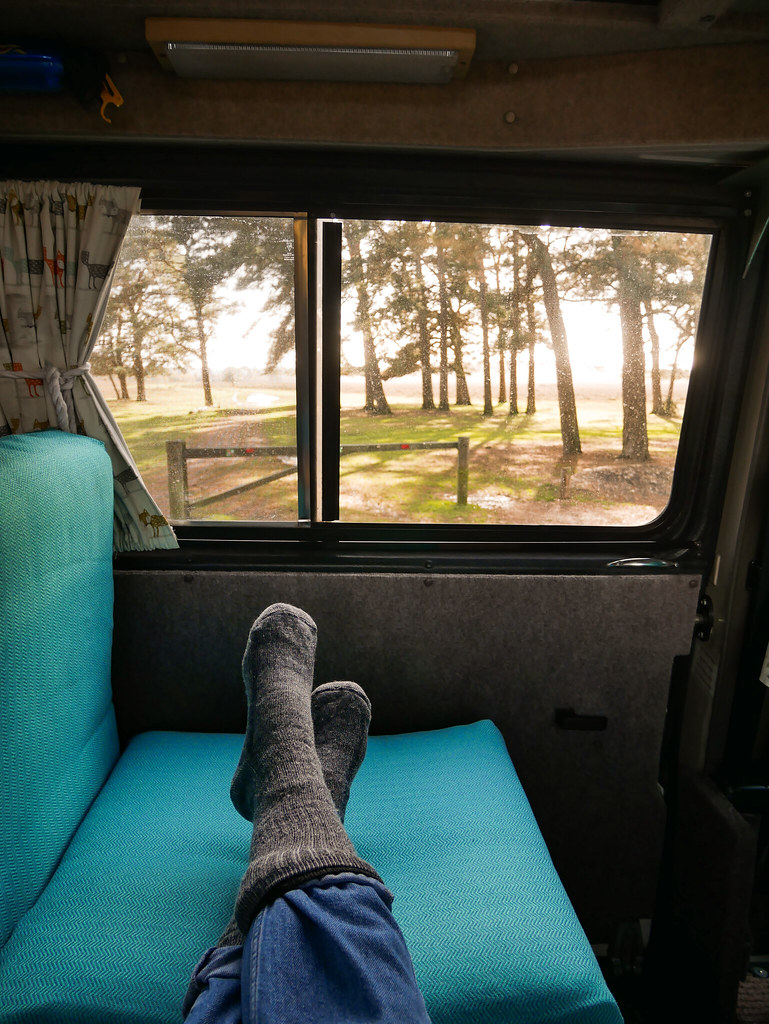 We turned onto a quiet road, passed a group of wild horses and pulled up in a little carpark. After a spot of lunch I threw my Wellington boots on, ready for a walk in the countryside. Craig however thought hiking boots would be appropriate footwear and he couldn’t of been more wrong – we’d received so much rain lately that the streams had all overfilled and created sort of lakes across the meadows. This meant he had to precariously balance along narrow logs like he was slack-lining over a canyon. I of course didn’t give him any sympathy but I was kind enough to piggy back him across a very flooded section. On our way back we came across a group of horses which was rather exciting. They were very tame and we could walk quite close to them. The star of the show was an adorable baby that had such fluffy looking fur. 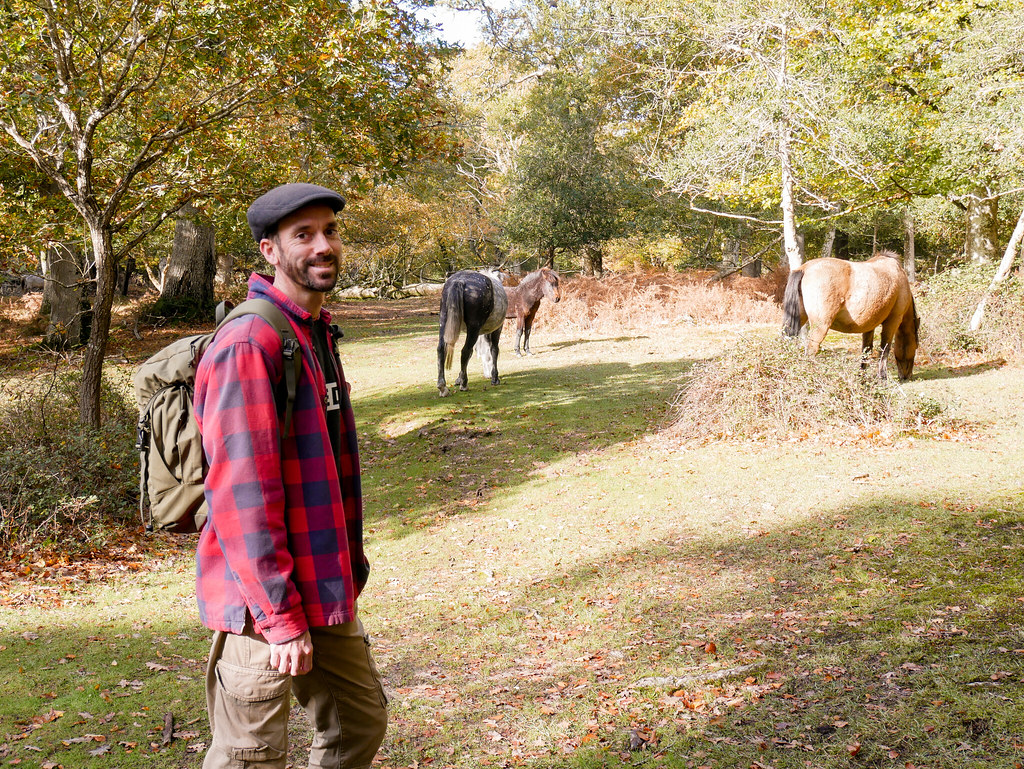 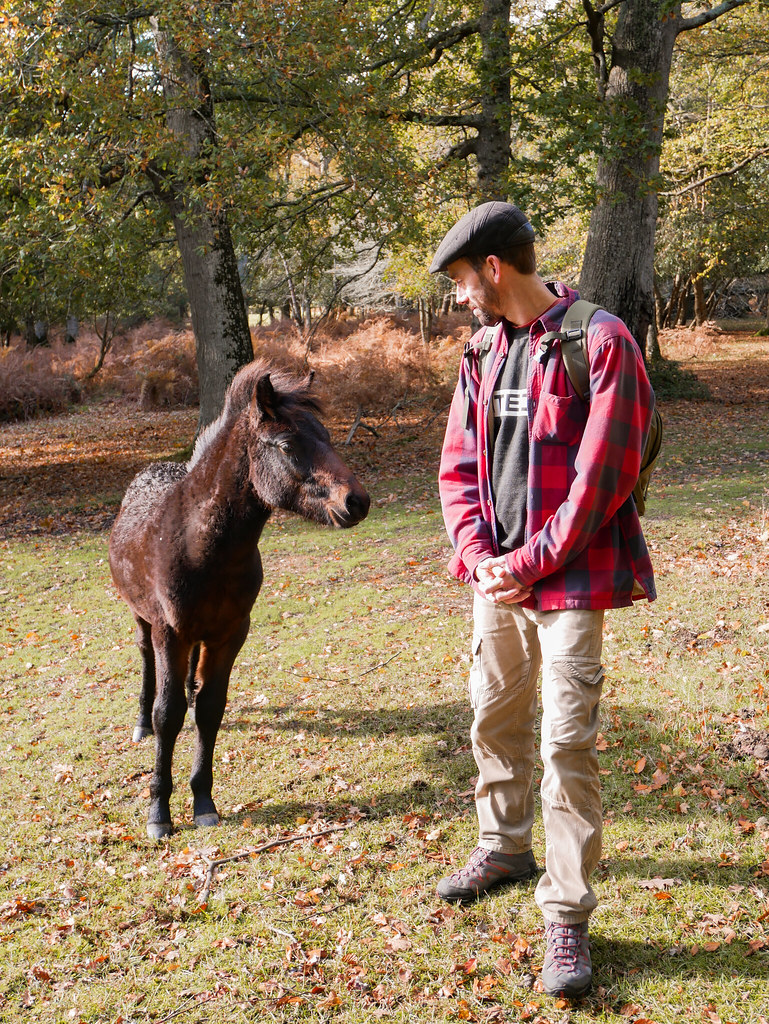 We had time for another hike so we set off on the ‘Tall Trees Trail’. I was instantly impressed as huge trees towered above us. The trail got its name from the Douglas Fir and Redwood trees which were planted in the 1800’s. Craig and I visited the redwoods in America many years ago and we were astounded by their size. In fact, to give you an idea of how much bigger they are in the USA – the tallest redwood in the New Forest is 51m whereas the tallest one ever recorded in America is 115m. 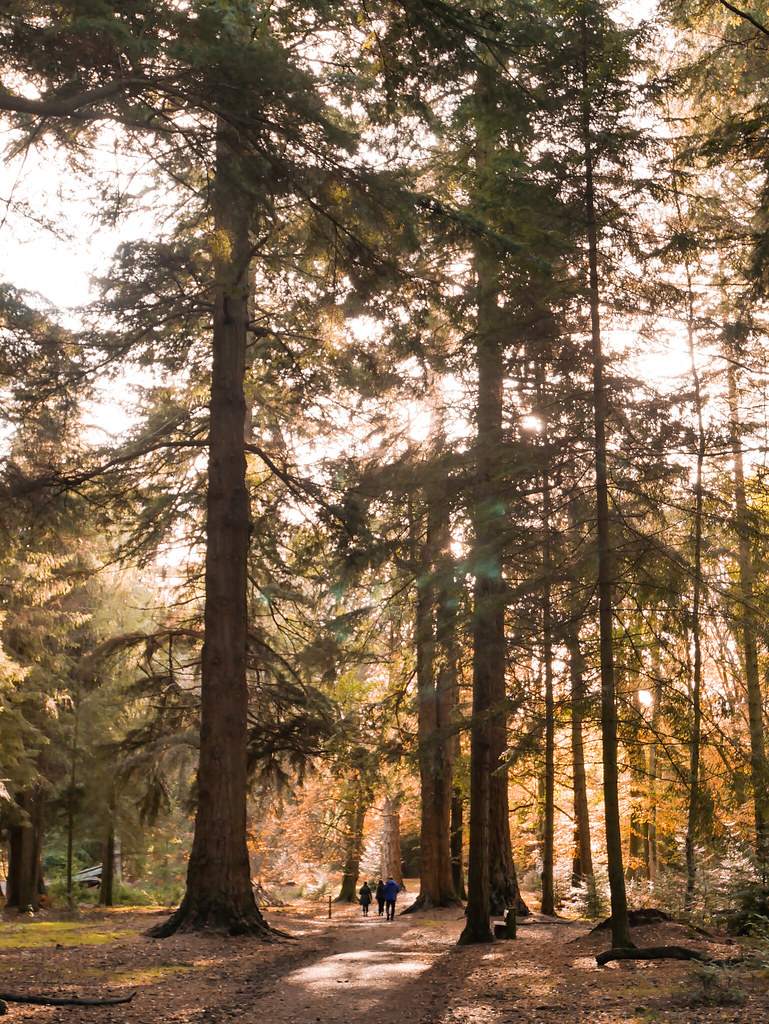 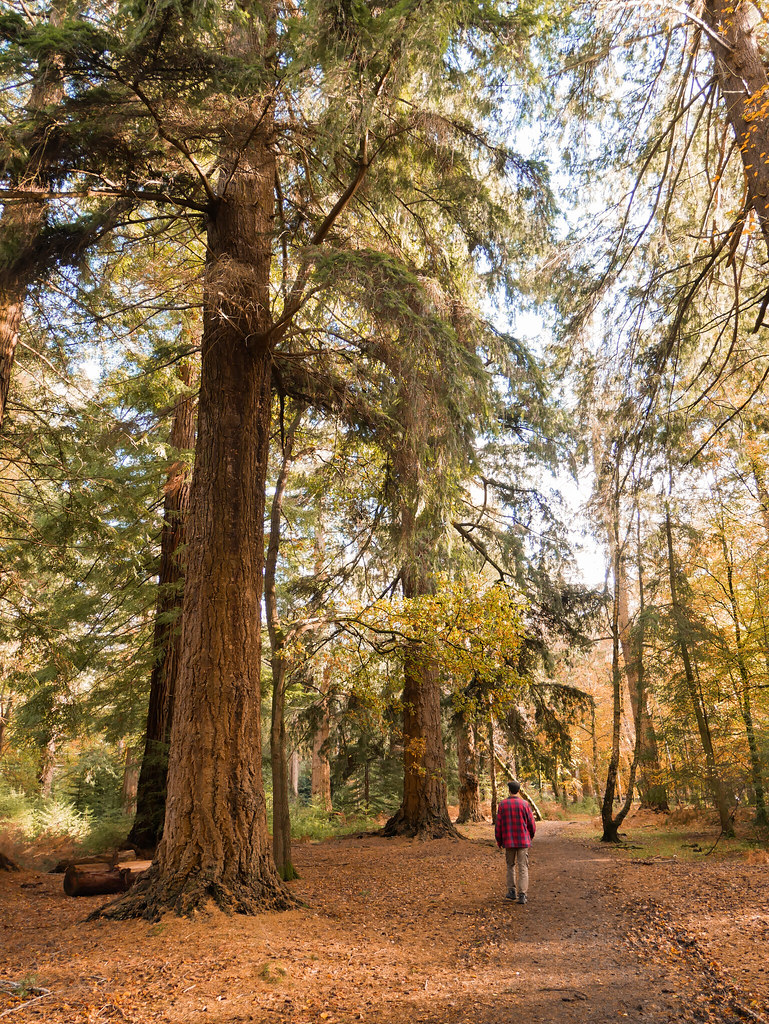 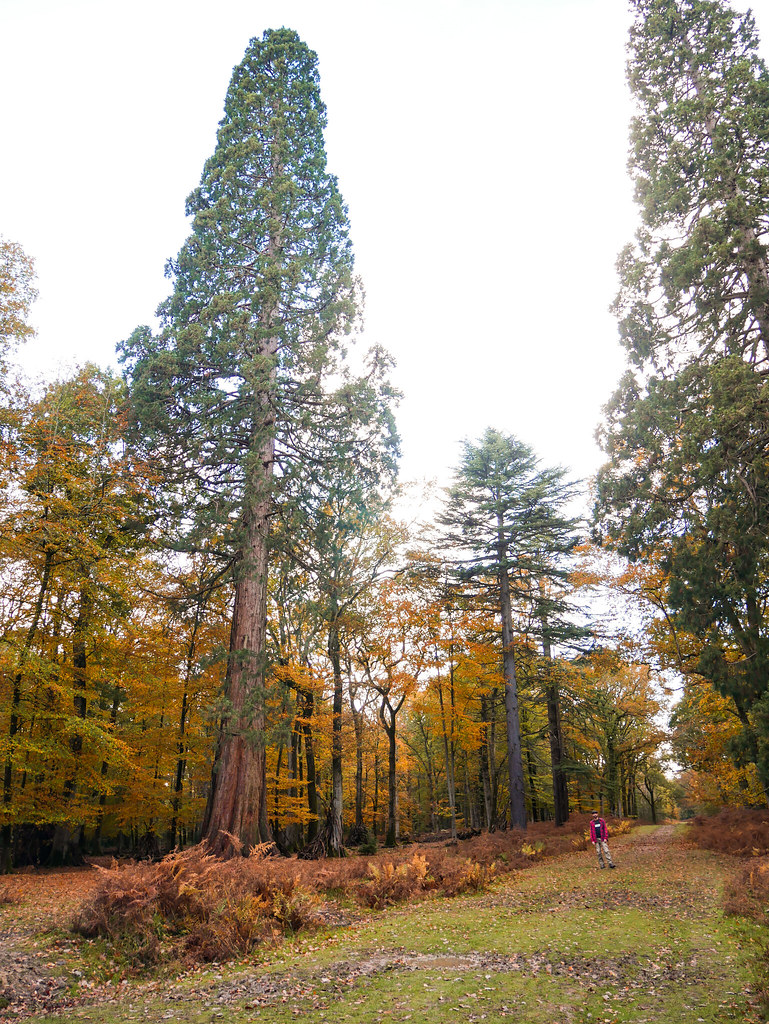 Even still, for England these trees were massive and for our hour stroll we almost got the feeling that we were in a different country. As we got back to the carpark the low winter sun began piercing through the forest and creating the most beautiful sun beams. I wanted to stay a little longer and take more photos, but it was time for us to look for a place to free camp for the night. It wasn’t the most relaxing area to drive; navigating narrow, windy roads in our bulky van without power steering and then trying to avoid the free roaming horses and cows! 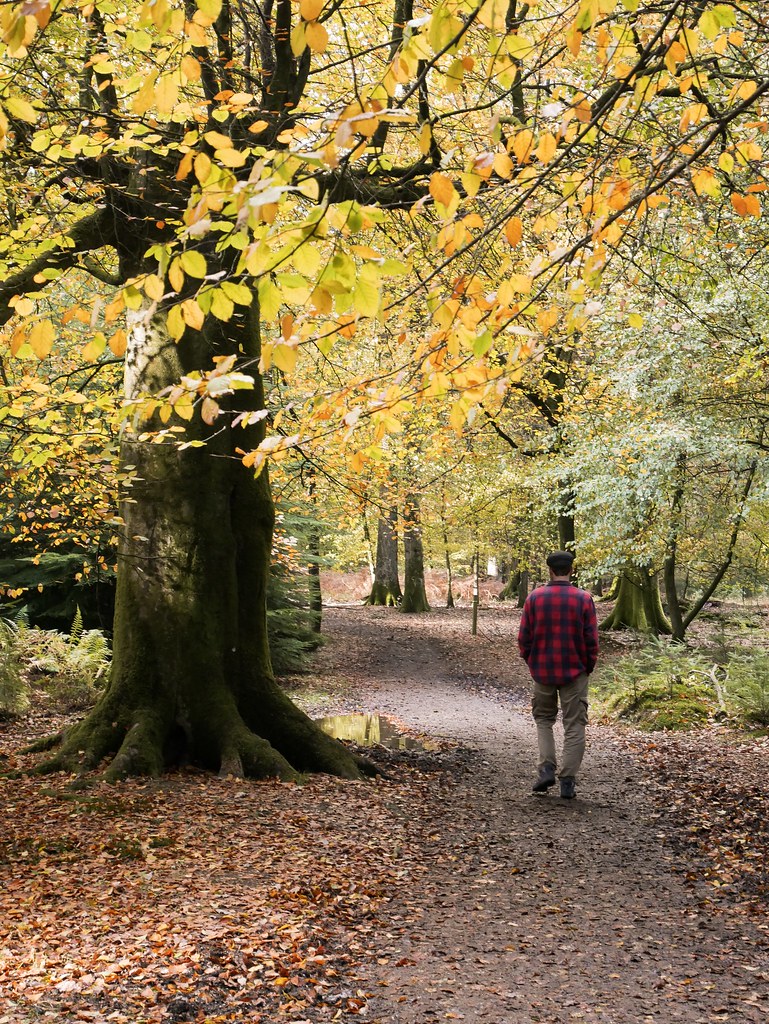 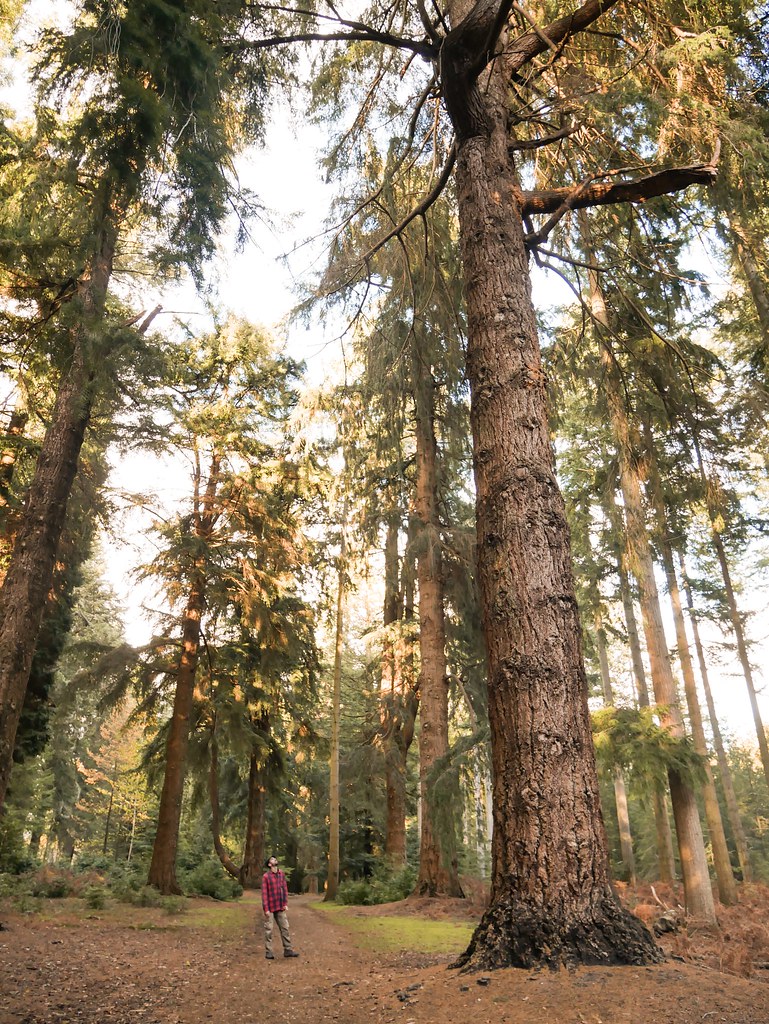 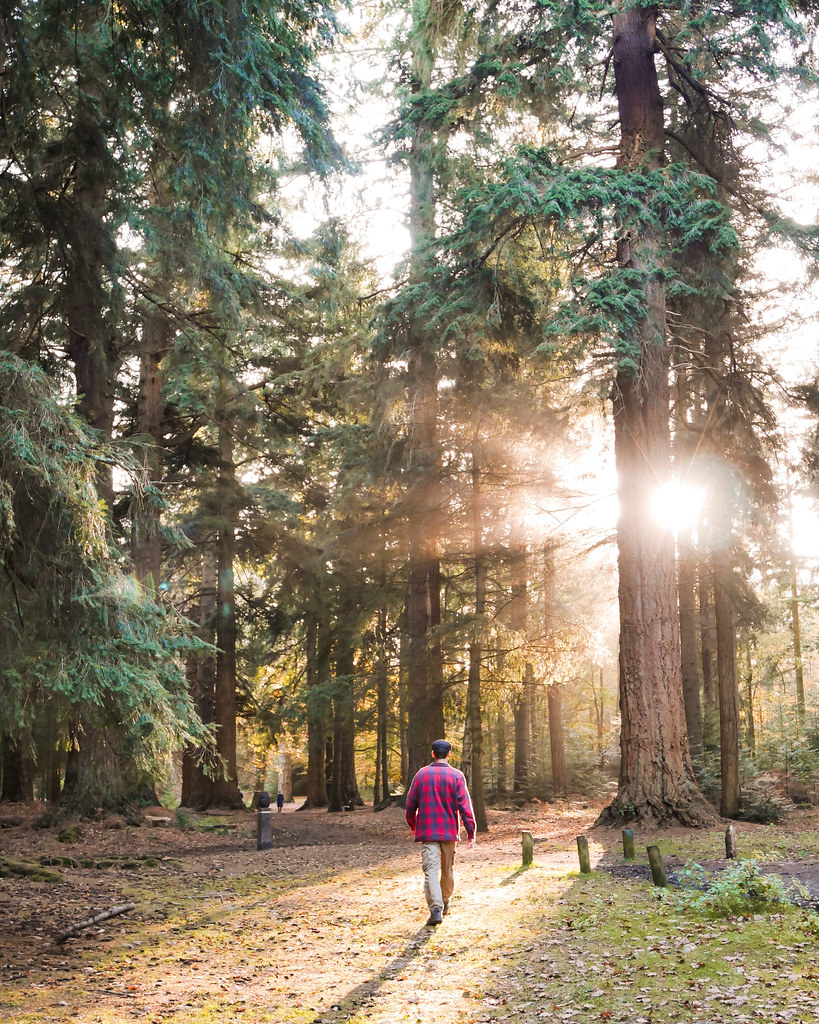 We headed further west and decided to follow the instructions to a single parking spot we’d heard about with good views. Before we knew it the road had shrunk in size to single lane and we were climbing up a windy road. The road peaked and then we saw the parking location – but someone was already there in a little car. We managed to squeeze in behind him, hoping he would be off soon. The view however was beautiful, we were high up on a ridge and below us were lush green pastures. 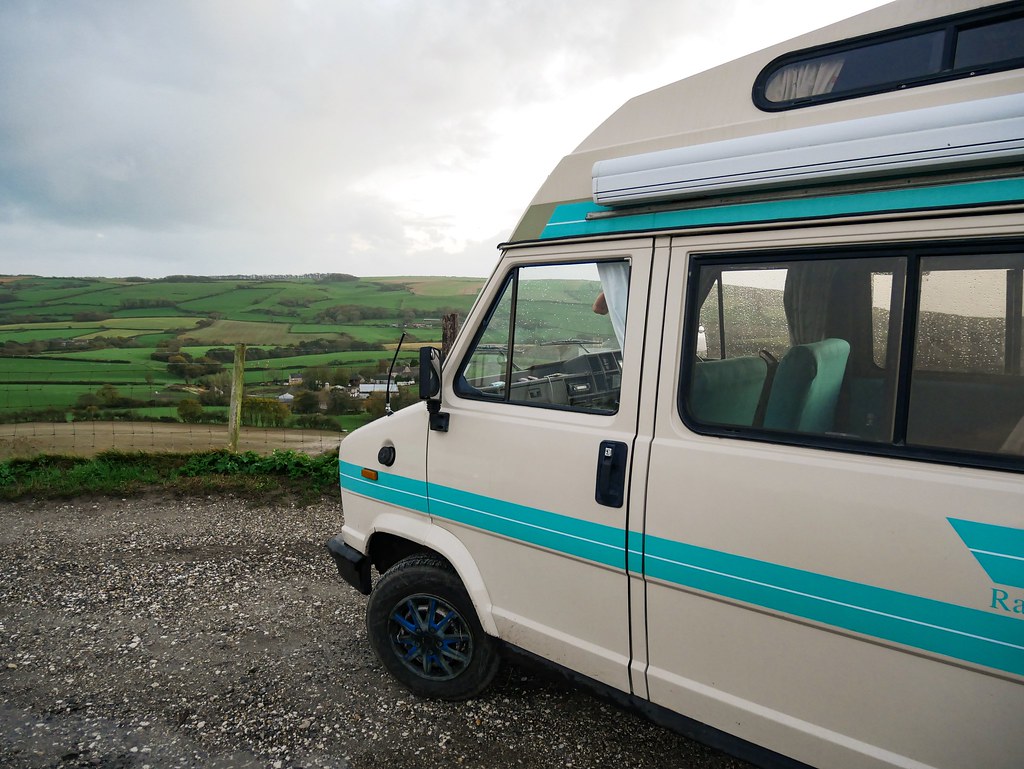 Dark storm clouds began rolling in and with them came drizzly rain so Helga’s windows quickly fogged up. The goddam car was still parked beside us and the man was just sitting in his foggy car. So, while parked at a very awkward slant we played the waiting game and grabbed a glass of red wine and a big bowl of pistachios while pointing at surrounding hills and picking the best location for sunrise. When it was almost dark outside the fella finally drove off and we managed to re-park. 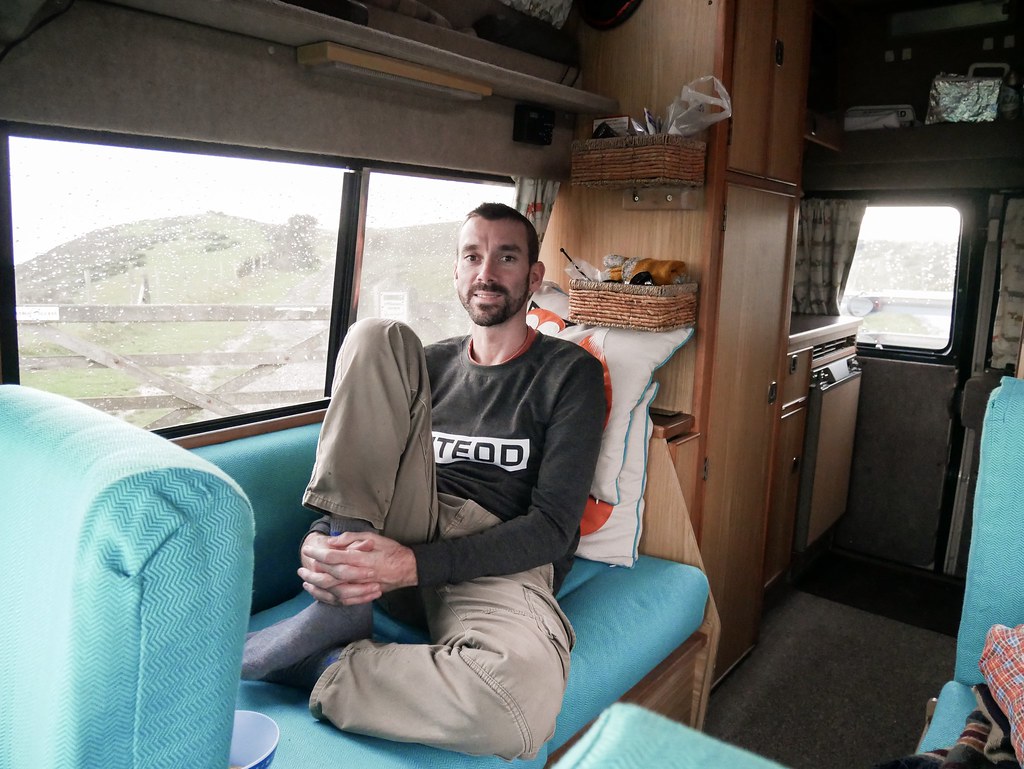 We pumped the heater on, closed all the curtains and began cooking a nice warm chilli for dinner. By 10pm we were shattered and called it a night. This van however needs the bed to be made from all of the sofa seats. I prefer sleeping the lazy way which doesn’t involve the driving seats, but Craig demanded we make the much bigger queen size bed. So he went about swivelling the front seats, manoeuvring them back and forth while dropping the back rests down so it was laying flat. Bit of a faff but finally we were off to bed and to be fair it was very nice and spacious. 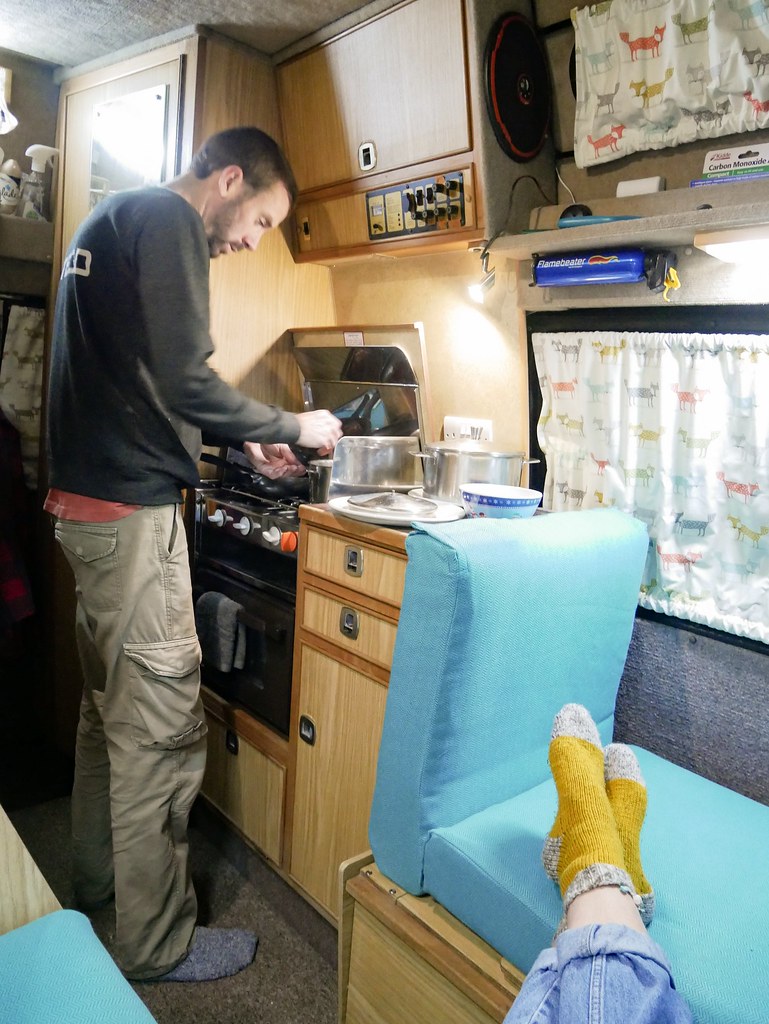 A couple of hours later wind began howling around us. It was impossible to sleep, the van was being pushed around and rain was hammering down. We sleepily mumbled to each other asking if we should move locations but we couldn’t really be bothered. By 4am it was just too wild outside. We genuinely thought Helga was going to be pushed over and then we discovered the sideways rain was making its way through the window seal and soaking the bed. That was it, we had to leave. So then we had the fun task of putting the front seats back into driving mode and heading down a precarious road in heavy rain. For some reason the lights on our dash were frantically flashing on and off like a spirit was taunting us, just to add to the drama of the night! We drove a few miles up the road until we found a pullout to sleep in for just a couple hours, and to our delight we couldn’t feel the wind anymore. Well, it was a memorable first night in the campervan if nothing else…