We did something a little crazy – we bought a new campervan. We actually bought it in Septmeber but these blogs are churning out slower than a snail in wet concrete. We’ve been keeping our eyes on the market for a while and then I spotted this beauty. A 1989 Talbot Express Rambler who’s the same age as me!! Our life’s been a bit up in the air lately, we don’t know when we’ll be able to travel again due to covid so the idea of having a campervan to use to explore the UK sounded rather appealing. Plus the main kick up the butt for us was the fact that the room we rent won’t be available for much longer as our landlord is selling up. Having the campervan means we have our next home ready to move into. I say campervan but it would be safe to call this one a mini-motorhome! She’s our 7th home on wheels and the first one we’ve actually been able to stand up in; that means no more kneeling on the floor to cook dinner. We have many luxuries now compared to our much simpler vans. She’s equipped with an oven, boiler for hot water, sink, shower and cassette toilet. But with any old vehicle she certainly has a few quirks – the windows for example don’t close very easily and need a person pushing them up from each side. 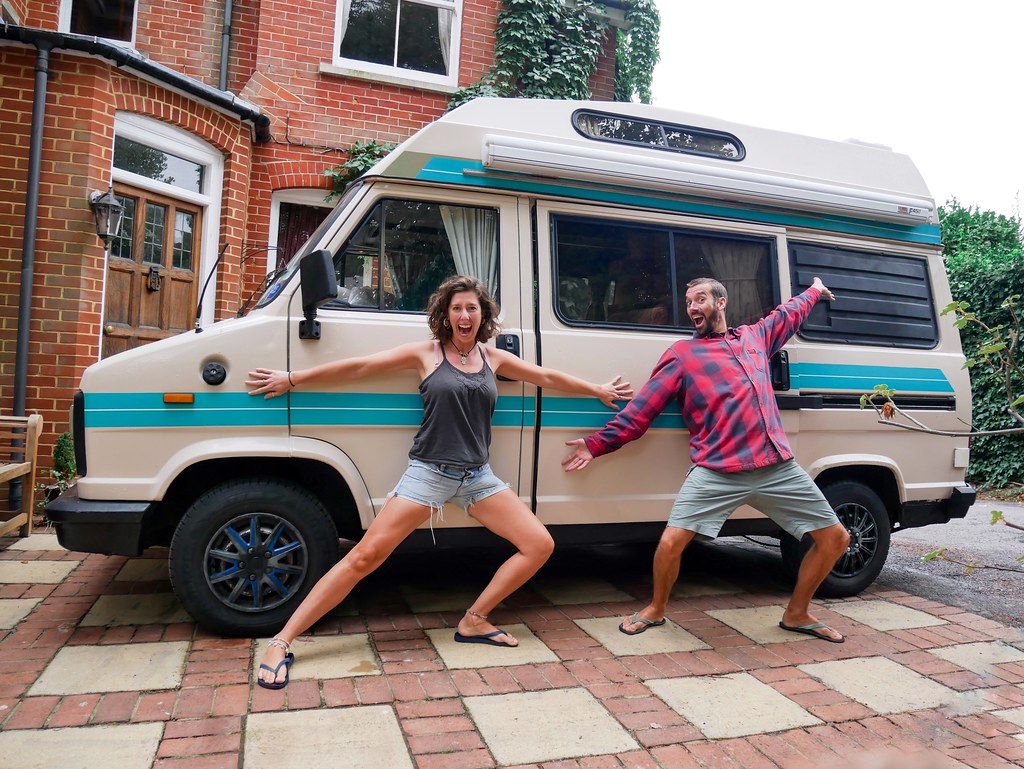 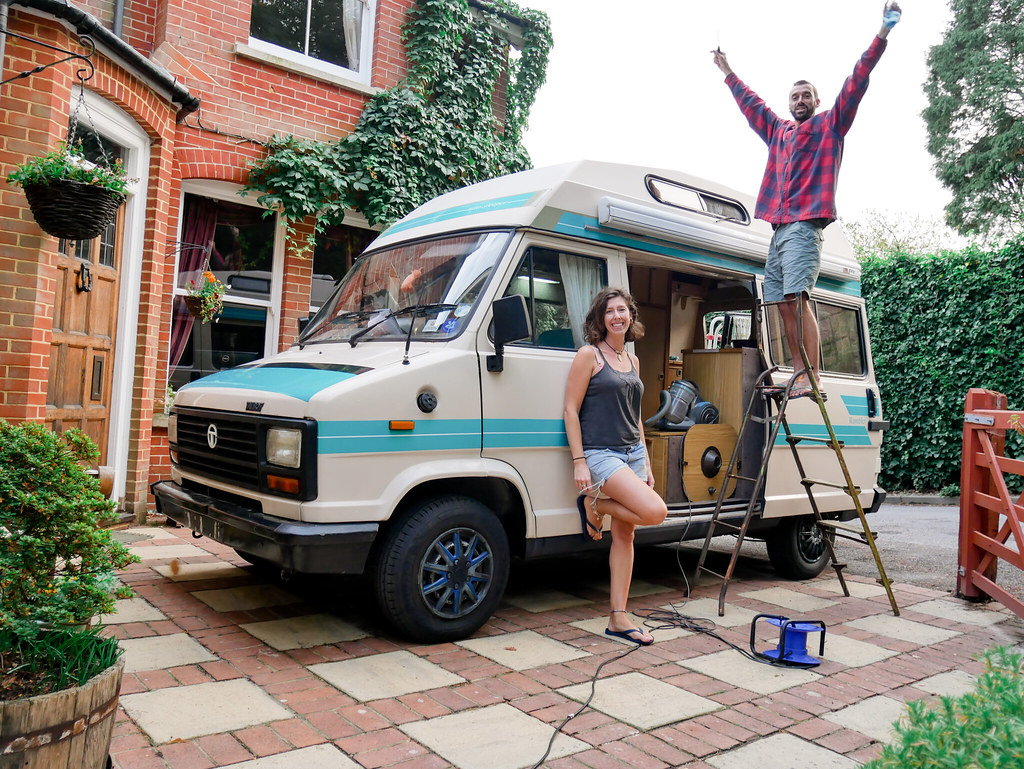 To be honest the purchase was a little impromptu, we weren’t expecting to buy it that same day but we were kind of rushed into the decision and we loved that the van had character and everything we needed to live in it. We gave her a test drive and as Craig turned onto the road he discovered the old van didn’t have power steering. I think the oldest van we’ve owned was our 1994 Chevy G20 in Canada (similar to the A-team van) and even that had power steering. We tested her on some steep, narrow country roads and then on the motorway and she performed well. 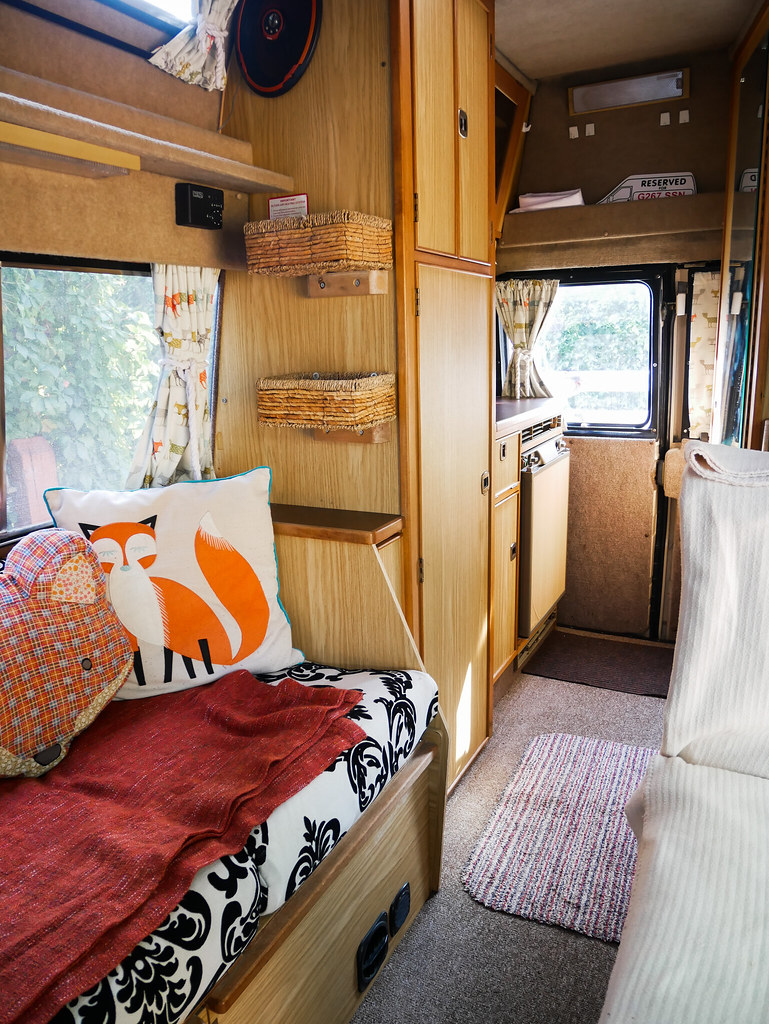 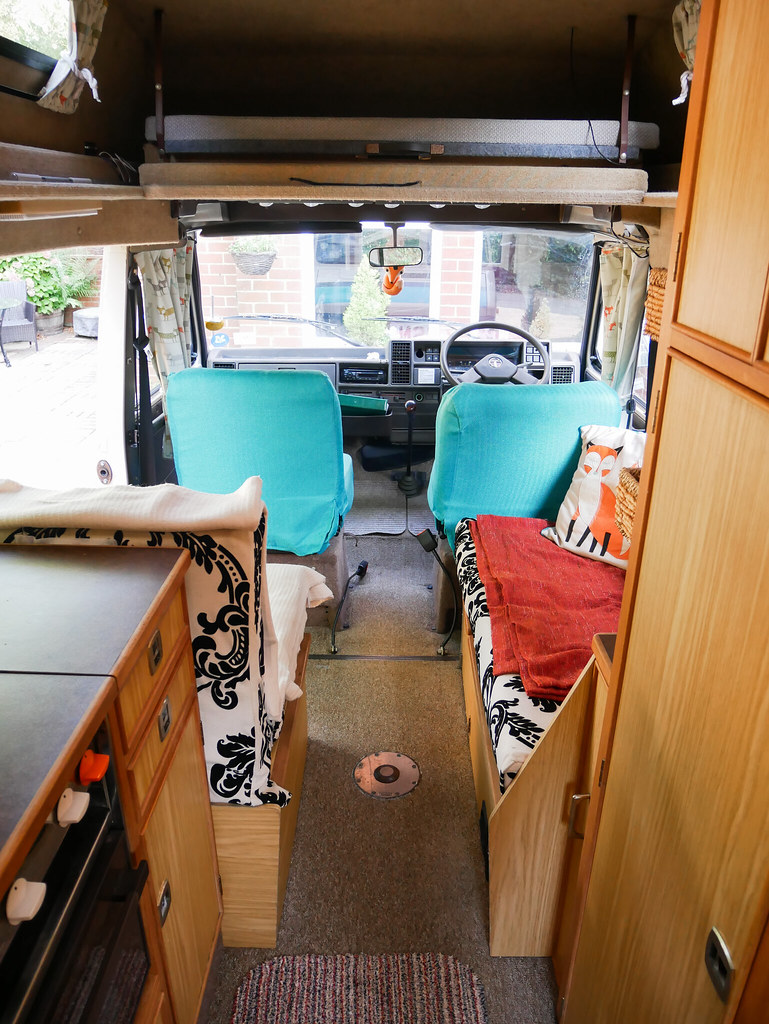 The price however was way too high, more than we’ve ever paid for a campervan and there were a few things that needed fixing. The heater wasn’t working which was vital if we were to live in the van during winter, and that passenger chair was literally hanging on like a wobbly baby tooth. Honestly I don’t know how the previous owners didn’t get that fixed, thinking about it now it must’ve been illegal, although at the time it was rather humorous; as we picked up speed on the test drive gravity would push me back into the seat, but when the brakes were applied I was projected forward like on a rollercoaster ride. 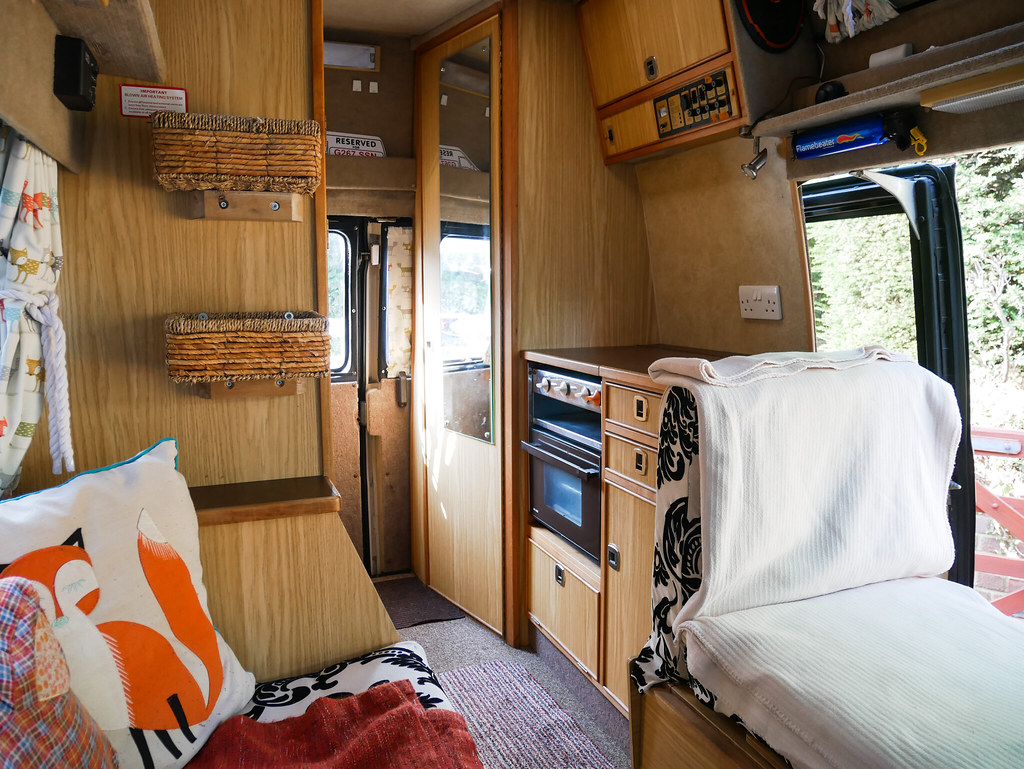 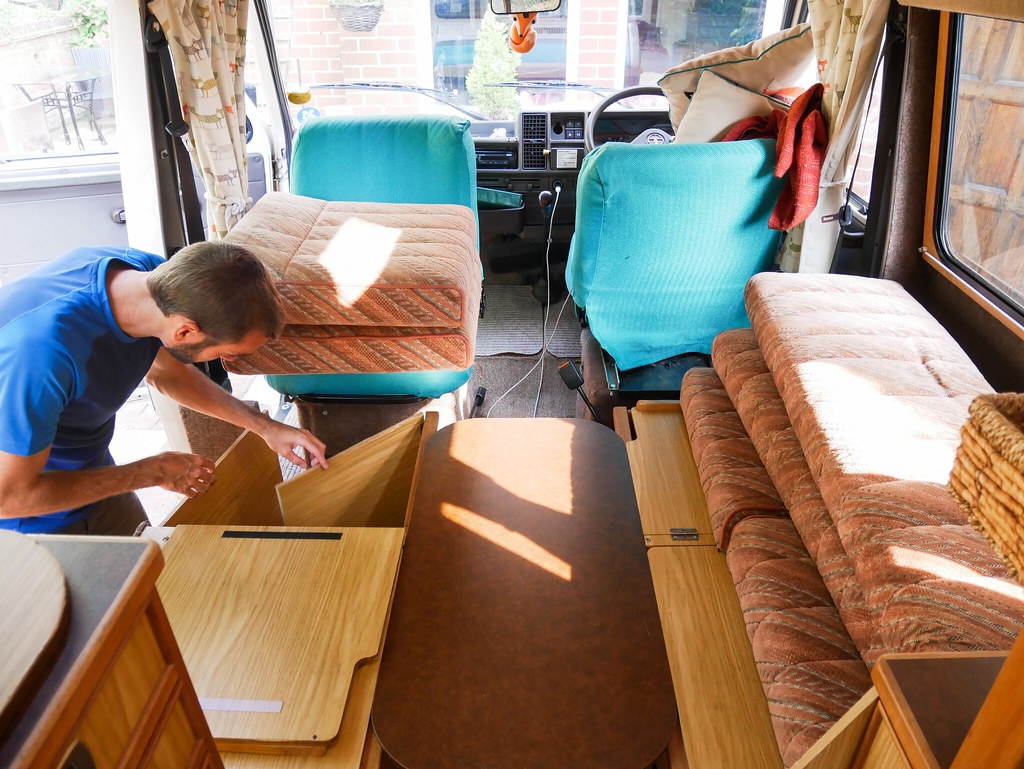 When we got back from the test drive and had another look at the van we noticed the tyre had a severe split in it. The tread was good but it had a deep cut through it that revealed metal wires from the inner part of the tyre. So yeah there were a few issues that needed fixing and we managed to get the price down a little by pointing these things out – and before we knew it we were signing the documents! It was getting dark when we finished the paper work and insurance company’s were closing for the day so we left the van on the previous owners drive and came back the following day once we’d arranged cover. 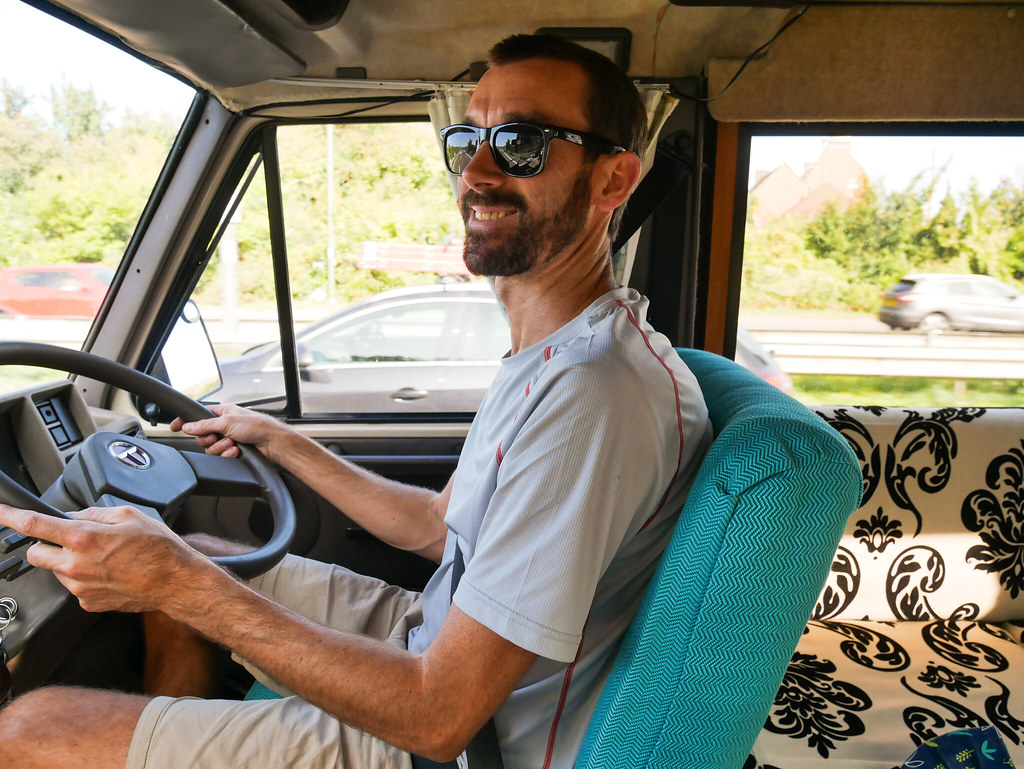 Our first job was to get a new tyre so we drove off, with me bouncing around in my broken chair, involuntarily wobbling my head like an Indian in deep thought as we drove a couple kilometers to Kwik Fit. The staff were so rude and the price for a new tyre was hefty so we quickly left and headed to Halfords. Ideally we just wanted to put our spare tyre on and find a replacement second hand tyre another time. But then we discovered we didn’t have a jack. A lot of the garages were too busy to change our tyre so we decided to buy a jack and wrench and just do it ourselves. We didn’t even know what weight the vehicle was, what bloomin’ jack did we need? Eventually we picked one and two truckers saw us faffing with the instructions and came over to help. It was a little awkward with covid as they were getting quite close to us but I didn’t want to be rude as they were just trying to help. Craig began unscrewing the spare tyre and discovered it was flat so he headed to Halfords to fill it up. In the meantime one guy got his own wrench and helped unscrew the bolts, at which point the van rolled forward. We figured Craig hadn’t put the handbrake on but now we’ve discovered the handbrake was absolutely knackered.

Craig came back with the tyre and some bad news – the spare tyre was also dud. Brilliant! The metal rim had corroded and it wouldn’t hold air, so we thanked the two truckers and began calling around to see if we could locate a tyre in one of the nearby garages. An hour or so later and we had a fancy new tyre and were finally ready to take her home.

We’ve decided to call the van Helga. It has a nice Scandinavian ring to it but it could also be Austrian/Swiss and if pronounced in a south east London accent it could be very British…drop the H for a true cockney twang “come on ‘elga”!. The last van we bought in Europe was called Pablo so we thought we’d stick with the quirky, European vibe. 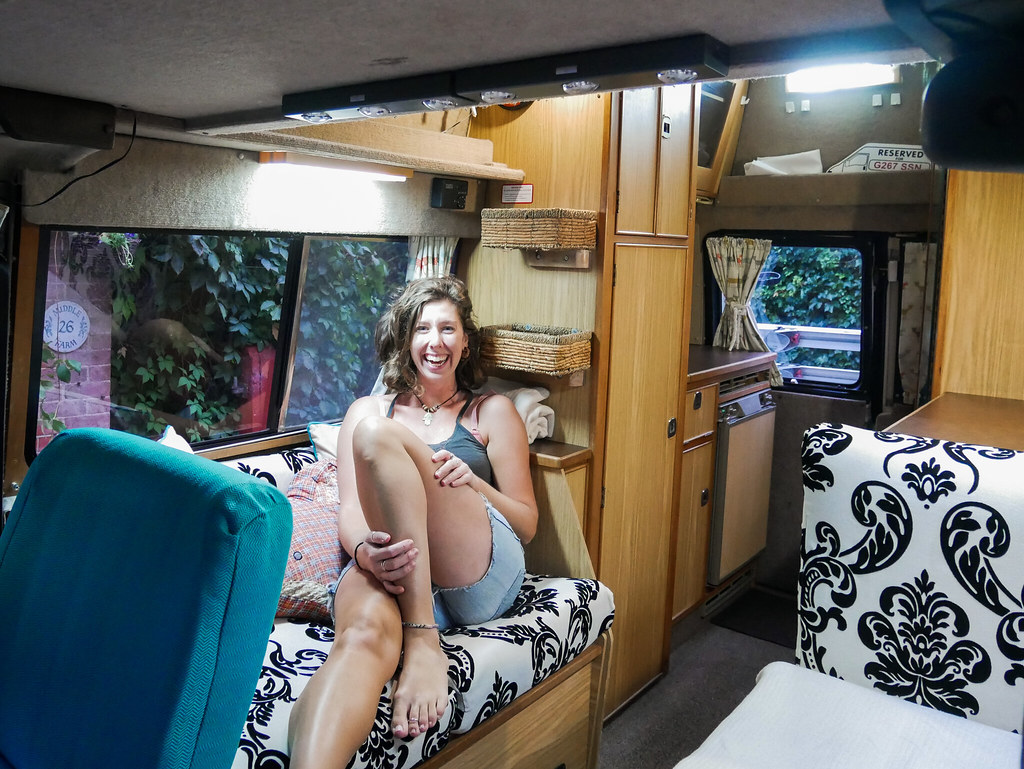 Sadly after taking her to the mechanic he found a lot of issues that should of been picked up on the recent MOT. The handbrake, faulty spare tyre and wobbly seat should’ve all been MOT failures which is a little disconcerting. We had to fork out a big chunk of money to get her fixed up and once all of the mechanical issues were dealt with we discovered she had a bad leak. The ceiling was sodden, leaking in from the skylight it had soaked the interior so we decided to spend our first night sleeping in her. We dried the carpet with towels and blasted the heater on – which we were told had been broken for about a decade but Craig and his Dad managed to fix. Hoorah. We were actually very cozy inside and albeit we were only sleeping in our local area it was so nice to be parked in nature, just stepping out our front door and going for an afternoon stroll felt so good. 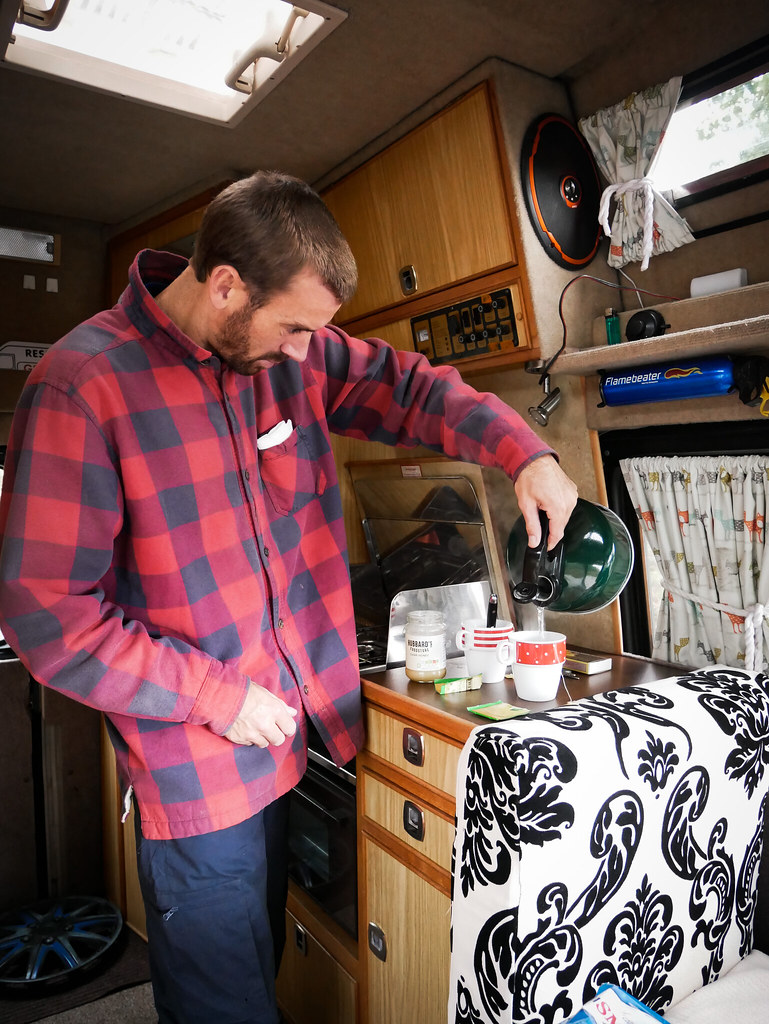 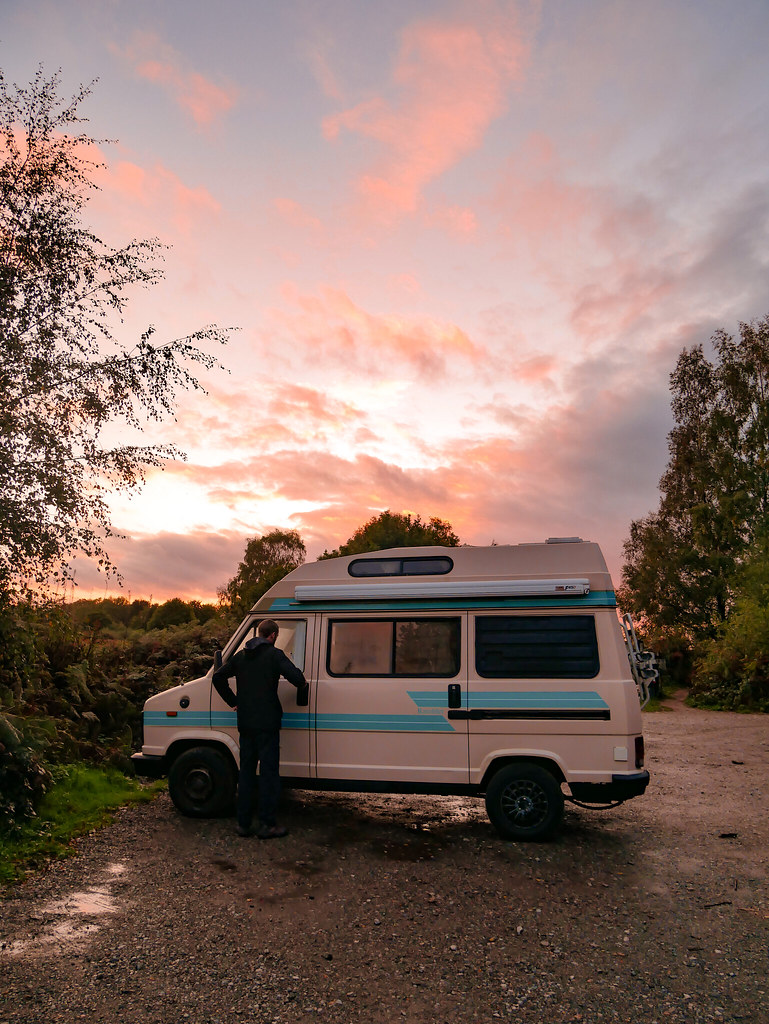 So Craig’s been spending every spare moment fixing old Helga up. He’s fixed the leak by repairing the sealant around the skylight and he’s also been fixing some rust holes with fibreglass. In the mean time I was in charge of upholstering the sofa covers. A previous owner had already ‘updated’ the vintage peachy coloured fabric with a rather ghastly white and black pattern which I hated. Helga was sold with a roll of blue fabric which matched her front seats and exterior blue stripe so I set about sewing new covers with that. She’s looking pretty damn good now and we’re excited to take her on roadtrip to Dorset and Devon very soon. 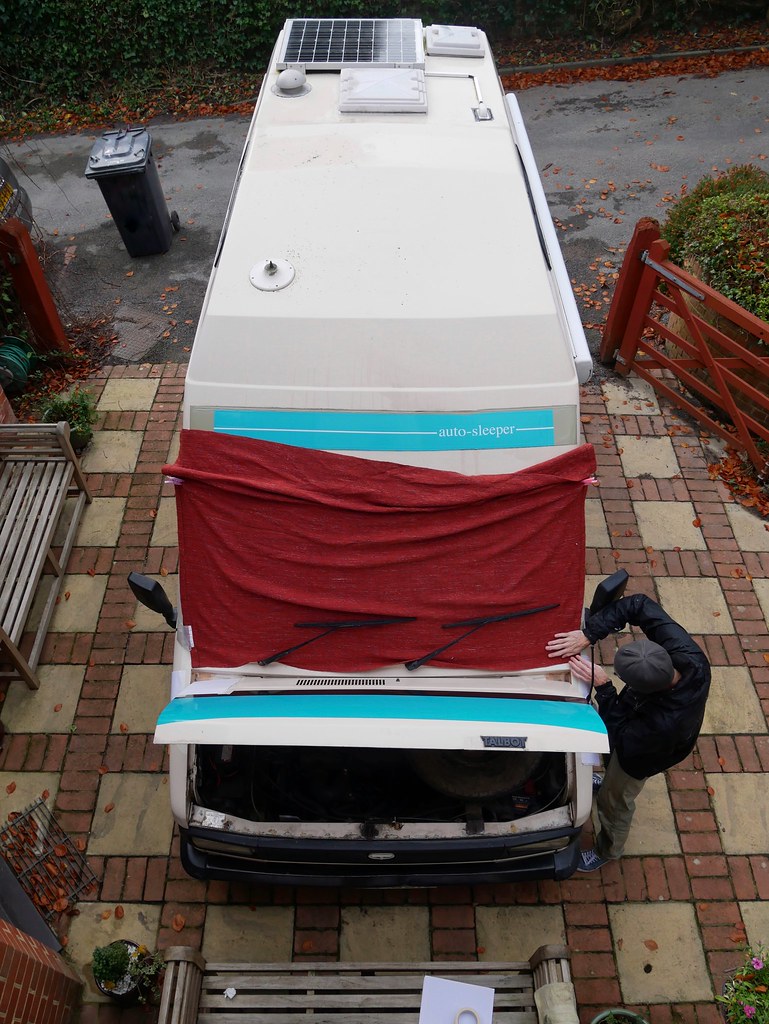 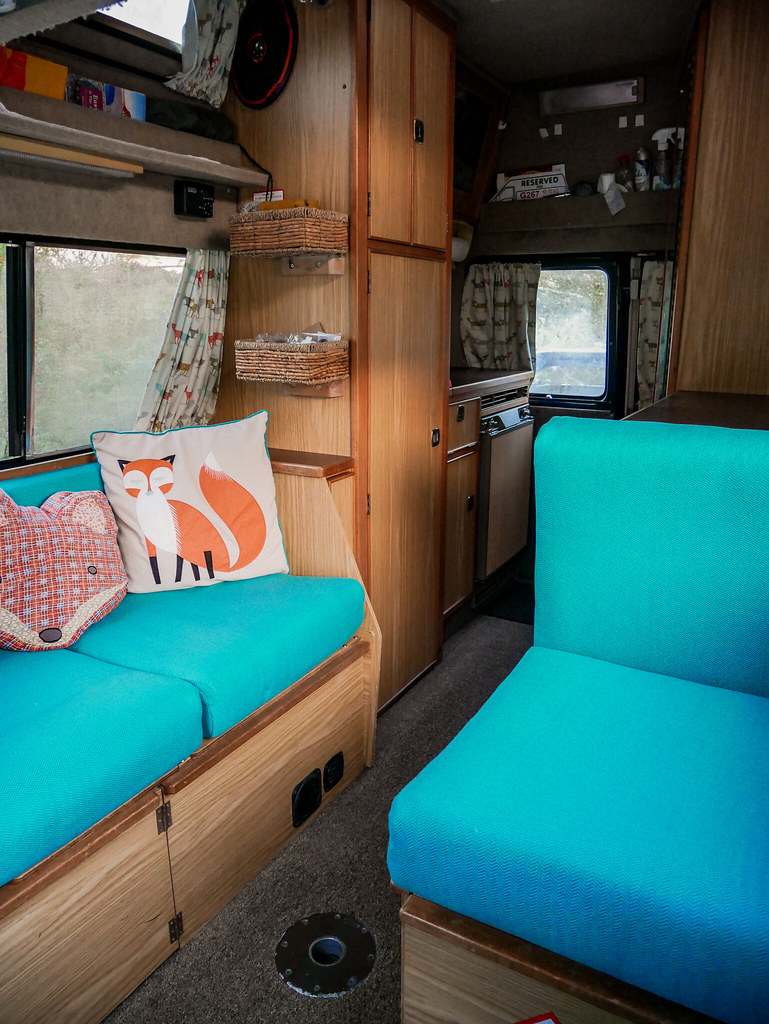 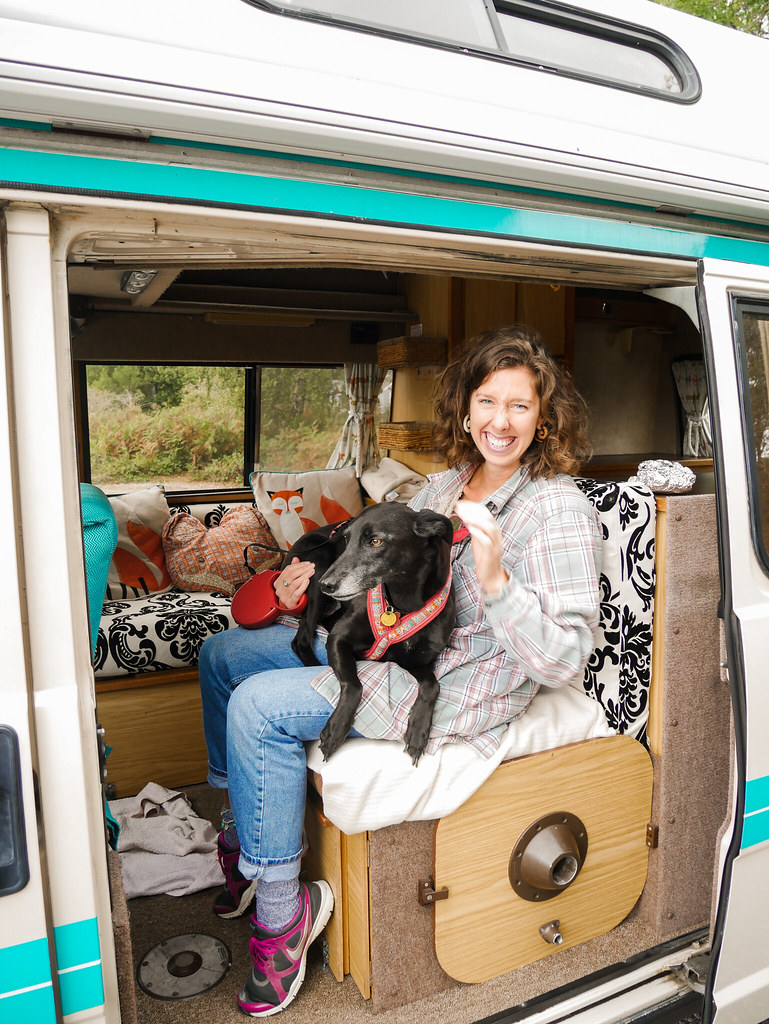