With lockdown easing in England we were able to catch the train to the coast for a full day hike along the chalk cliffs between Seaford and Eastbourne. It’s just a 45 minute train journey from us yet we started the day with a mad dash, running for the train and then sweltering in a face-mask once on board.

We’ve visited parts of the area in the past, like the famous Seven Sisters where the cliffs rise up and down in seven beautiful waves. But we’ve never tried hiking the full 20km route and I was excited to be out all day, it almost felt like we were travelling again.

Seaford was a delightful little place with a vast pebbly beach, promenade and a row of beach huts. To the end of the beach the white cliffs began to rise and we followed a rough track up. Straight away we were treated to dramatic views, the white cliffs were glaring in the sun and they dropped straight down to the turquoise sea. I actually couldn’t believe how appealing the sea looked. Normally the south east coast is battered with waves which churn up the sea into a milky brown mess. 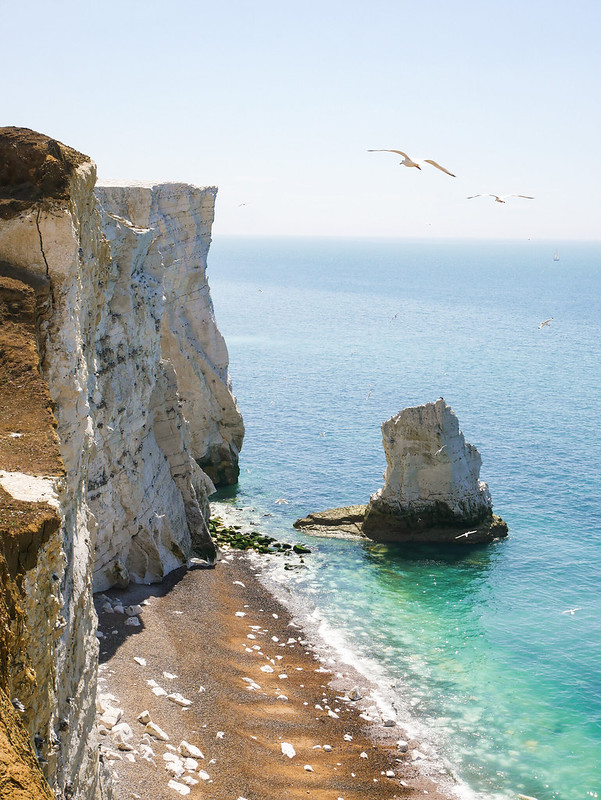 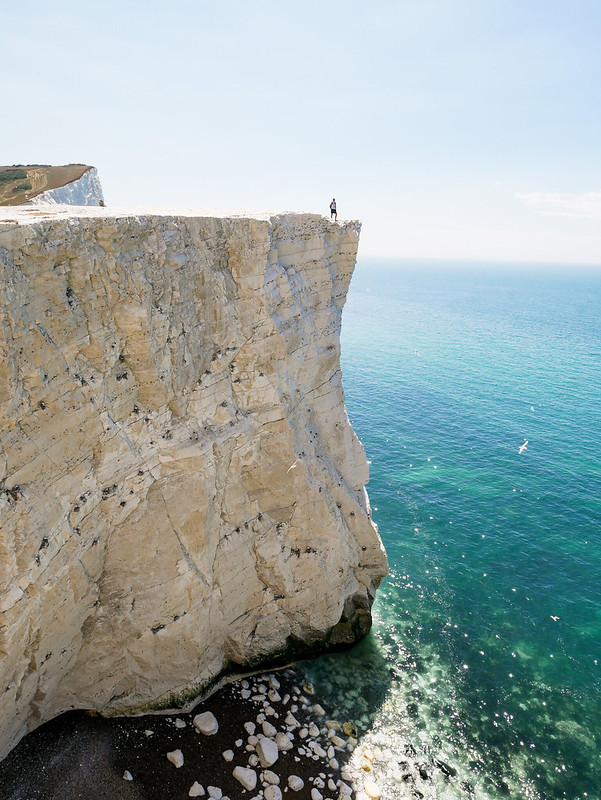 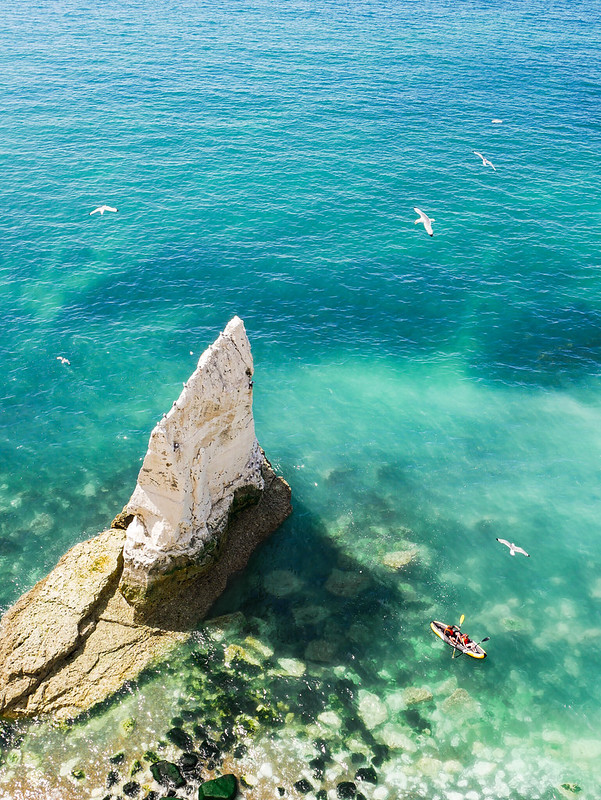 The sea was twinkling in the sun and a couple of kayakers paddled beneath us, navigating around a bizarre spire shaped rock. Seagulls swooped over our heads, squawking loudly and flying precariously close to the cliffs. We continued up and over the green hills, passing a field of cows living in a rather idyllic spot with an incredible view of the Seven Sisters rising ahead of us. This view was probably our favourite of the whole hike and further along were the quaint coastguard cottages. 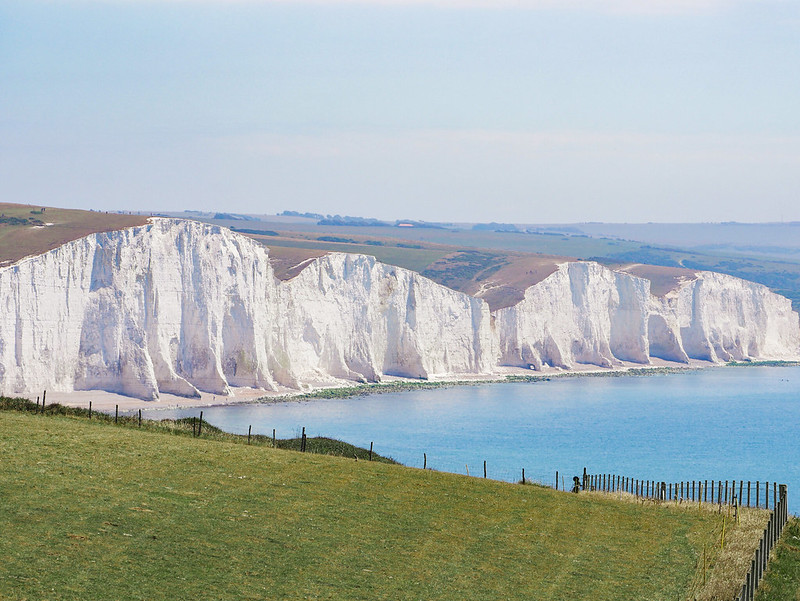 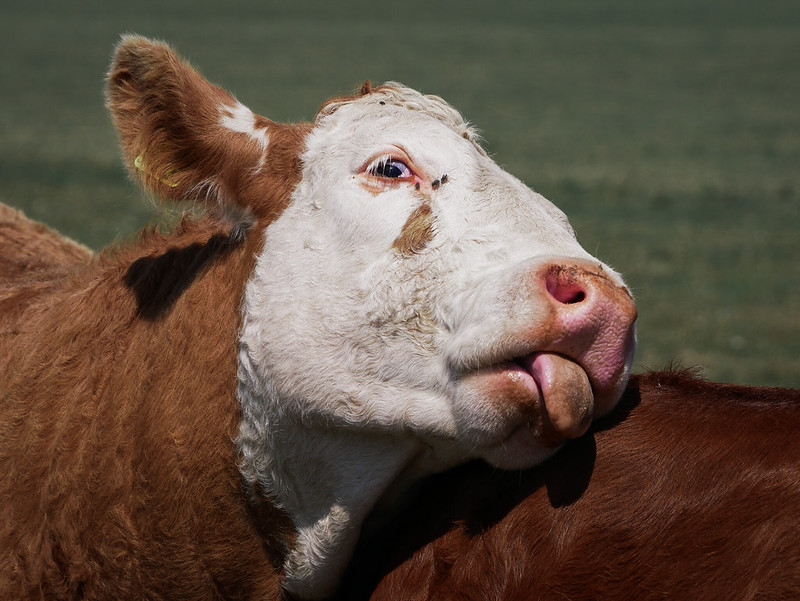 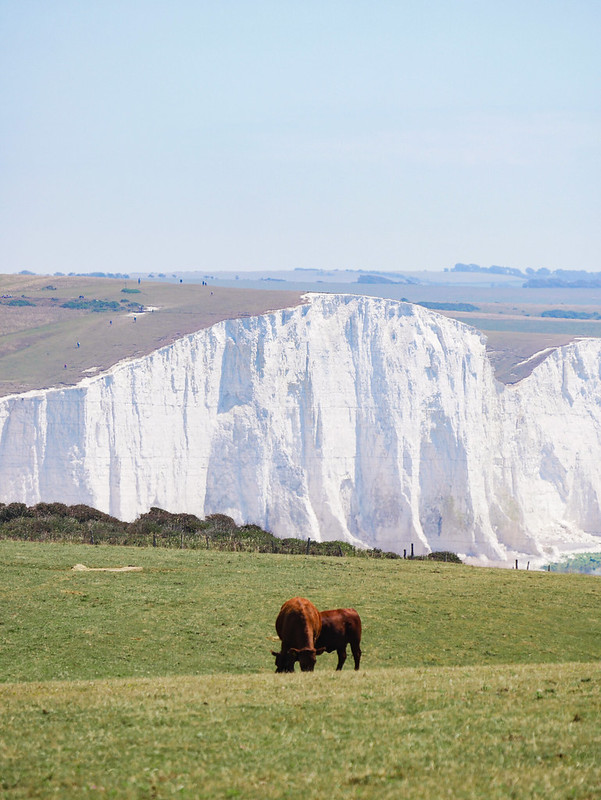 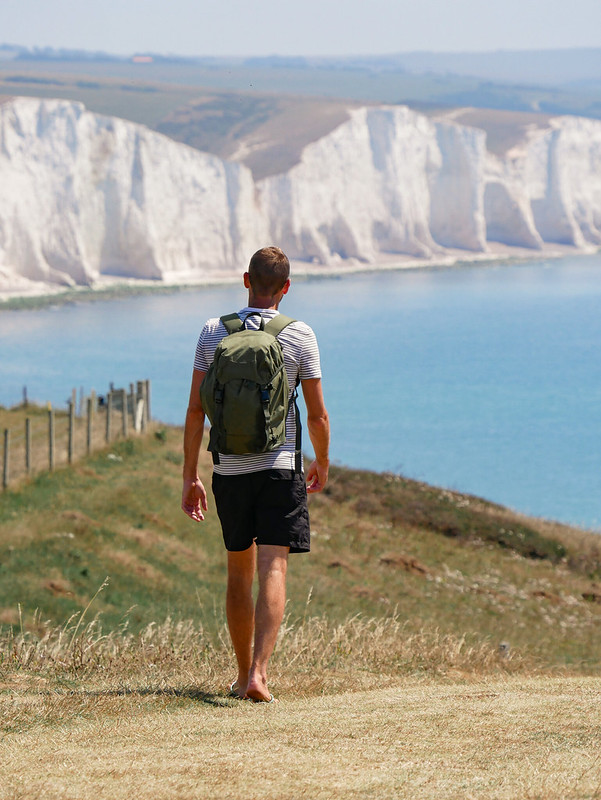 We had to hike right down to sea level at Cuckmere Haven, where there’s a meandering river and a big stretch of pebbly beach sandwiched between the cliffs. I was a bit worried that we wouldn’t be able to cross the river, which would involve a 4km detour up and around it to the nearest bridge. Luckily, the river came to a grinding halt and just disappeared beneath the pebbles, giving us easy access to the beach. Hooray! 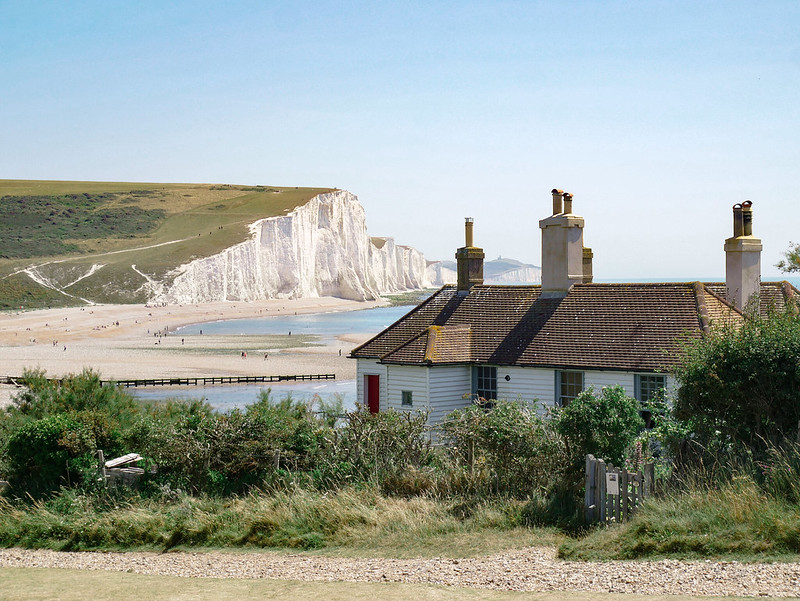 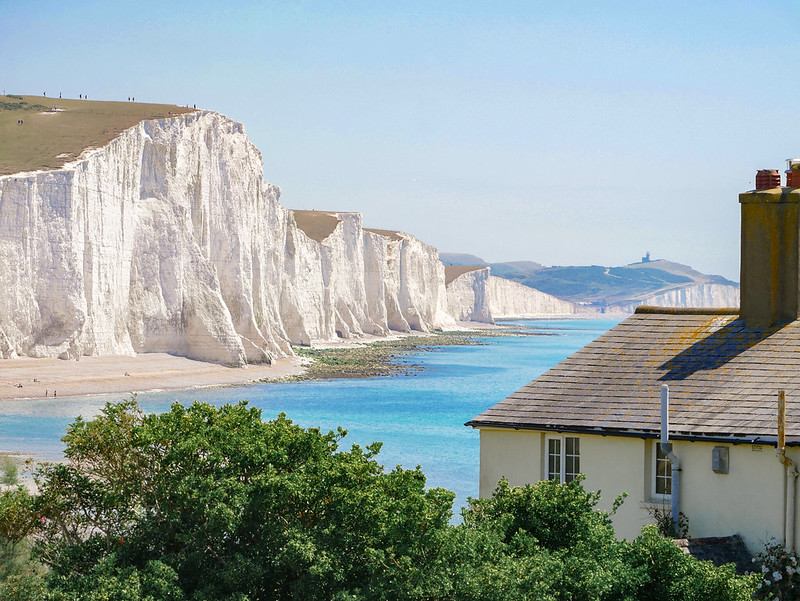 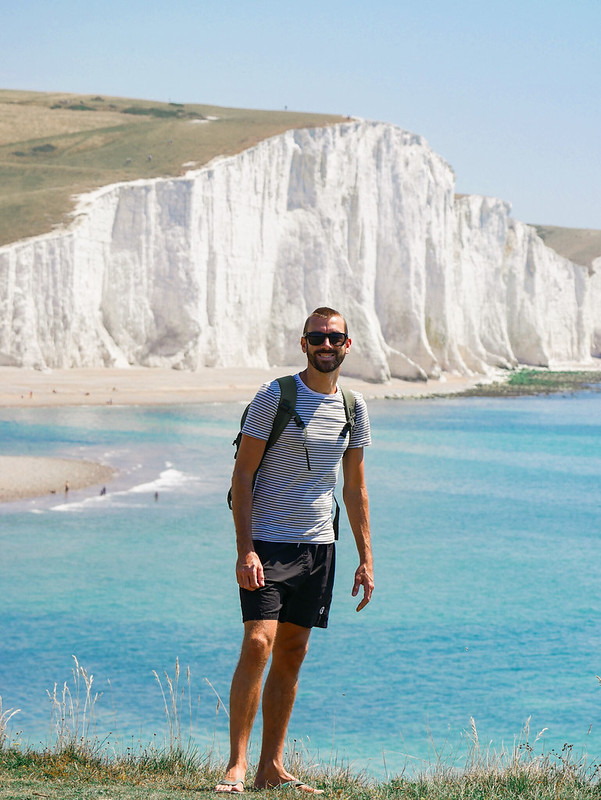 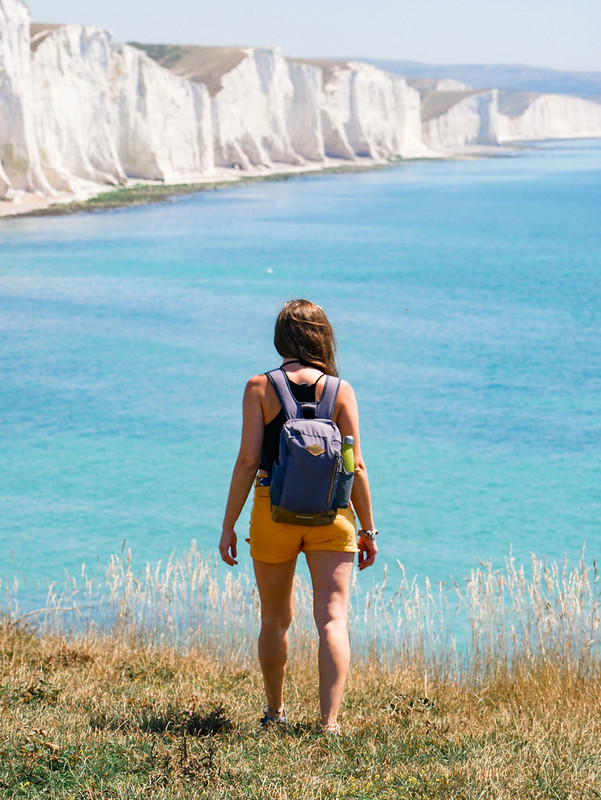 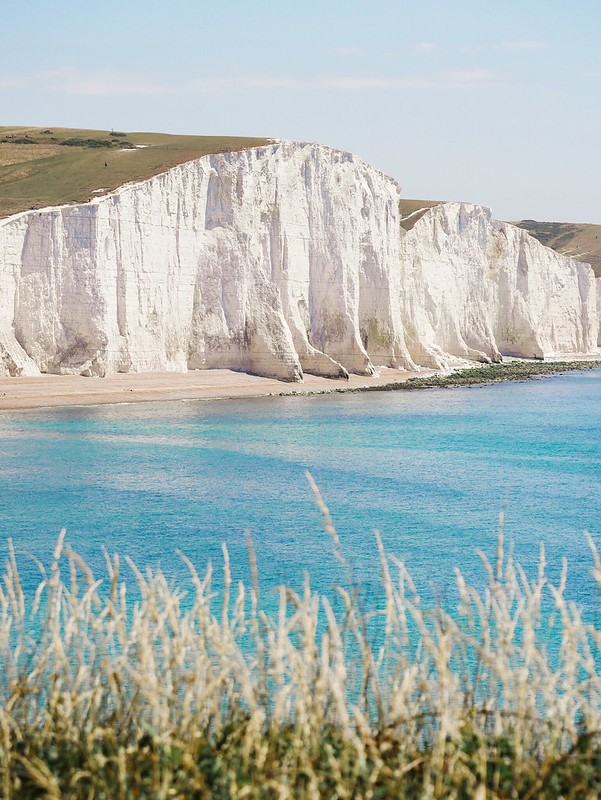 We were only a quarter of the way through the hike but we decided it was a beautiful spot to stop for lunch and a swim in the sea. There was a little gravel spit that created a sort of bay of calm water to swim in which was lovely. 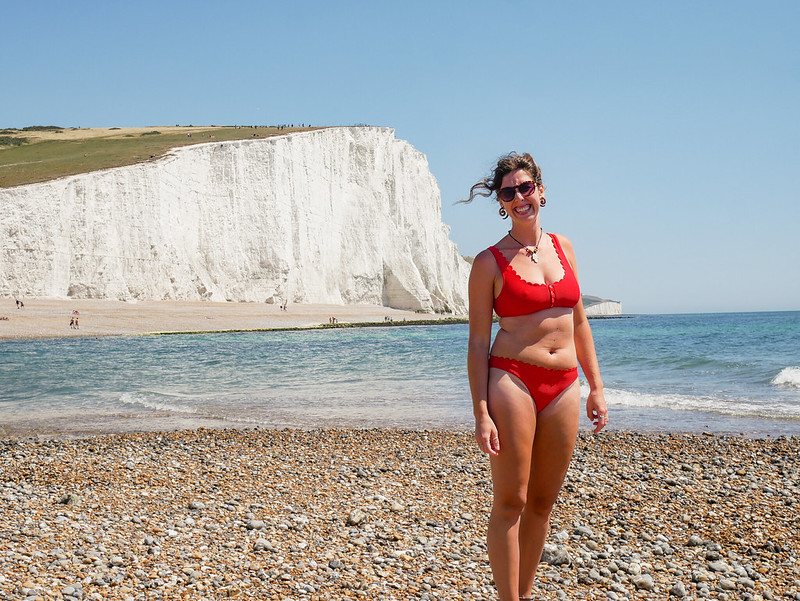 The next leg of the hike took us steeply uphill on rather uneven terrain, nothing we’re not used to but we were surprised that the trail wasn’t very well maintained. There were some great views looking back across Cuckmere Haven with the turquoise sea and lush green fields. 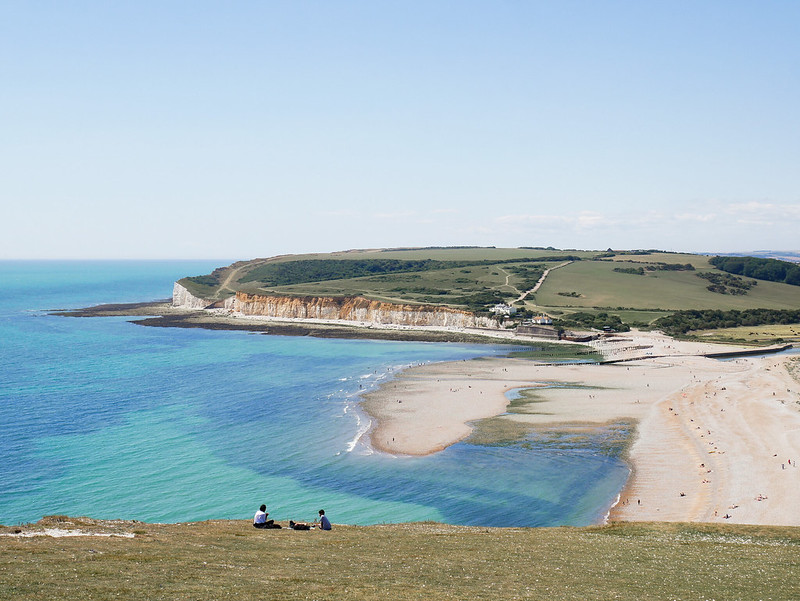 After climbing up and down a few more cliffs we made it to our next beach stop at Birling Gap. It was actually a really great hike, being able to stop and swim at beaches on such a hot day. Above the beach was a chocker-block carpark, so sadly the beach was much more accessible and therefore busier than the previous one. It was mainly a pebble beach, but then it turned into soft sand where the sea lapped along the shoreline. The water was really shallow and crystal clear over the sand so we were like big kids galloping fearlessly over the gentle waves. We actually had to continue our awkward gallop longer than we anticipated as the sea wasn’t getting any deeper. Eventually we gave up and submerged in a couple feet of cool water. 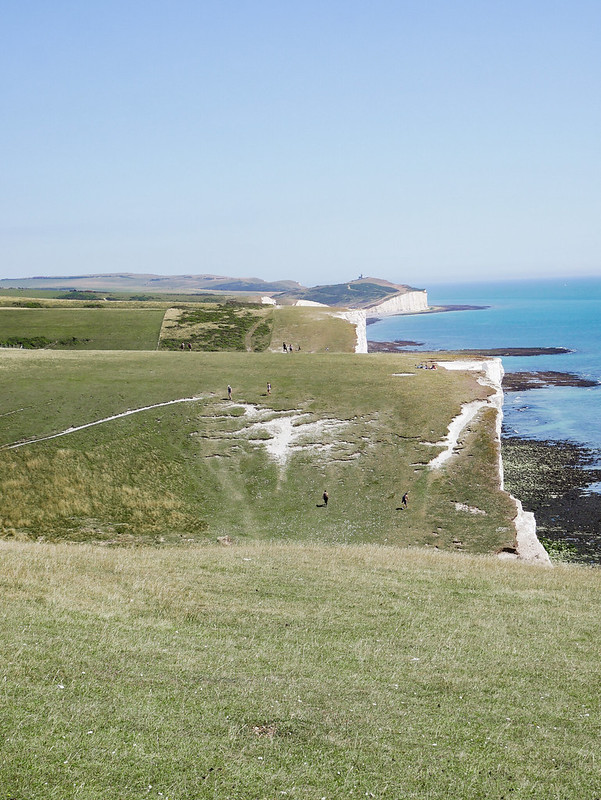 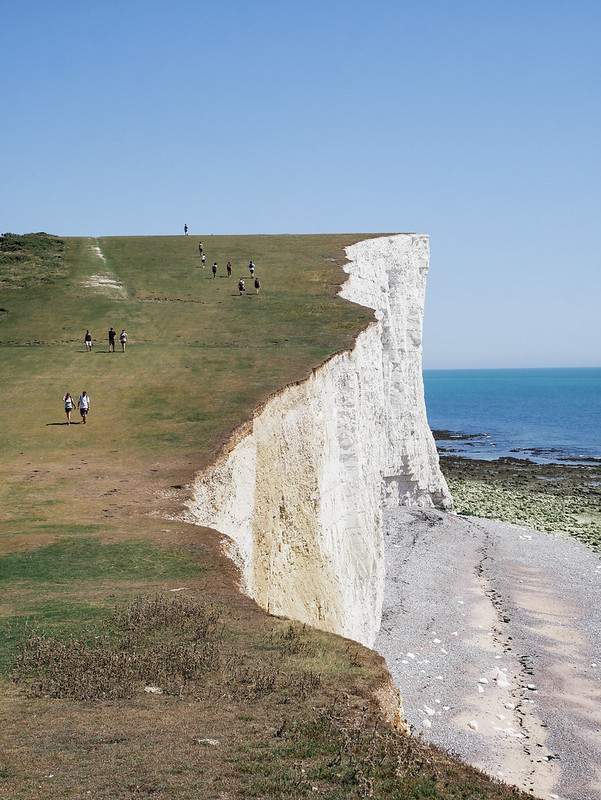 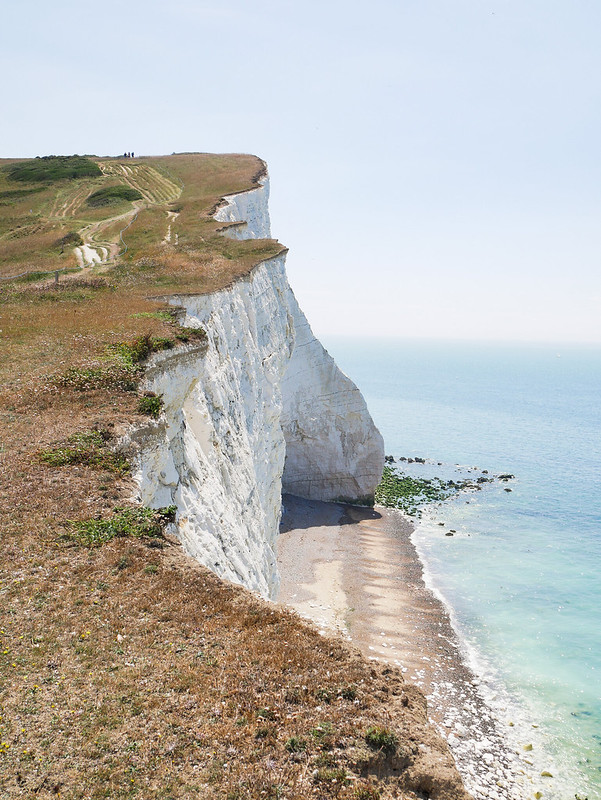 We were now halfway through the hike and after a few refreshing ciders at the beach we continued the walk. The cliff views weren’t as impressive on this leg of the trip, however we were treated to views the other way, of rolling fields, each one a different shade of green like a patchwork quilt. The odd tree that survived in the area was totally windswept and grew almost horizontally. We eventually spotted Beachy Head, the highest chalk cliff in England standing 535ft above sea level. Beside the cliff was a traditional lollipop style lighthouse, striped with red and white paint. 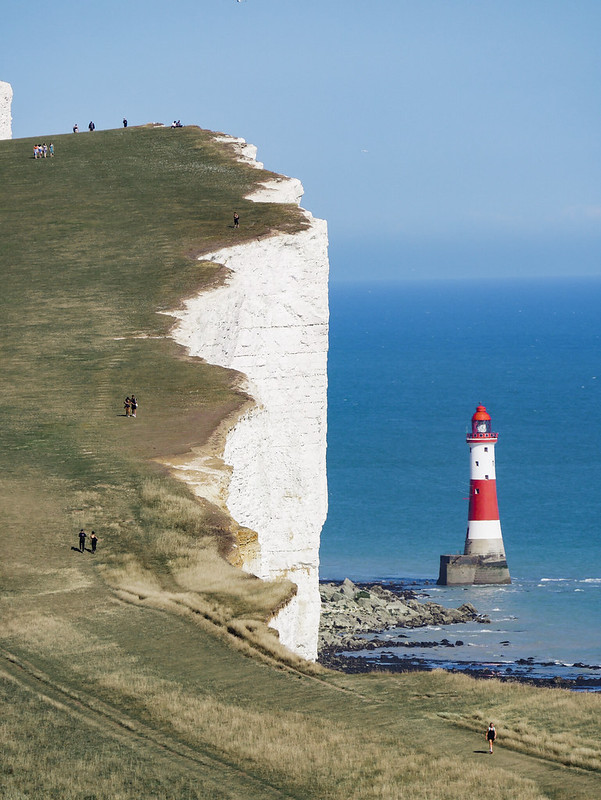 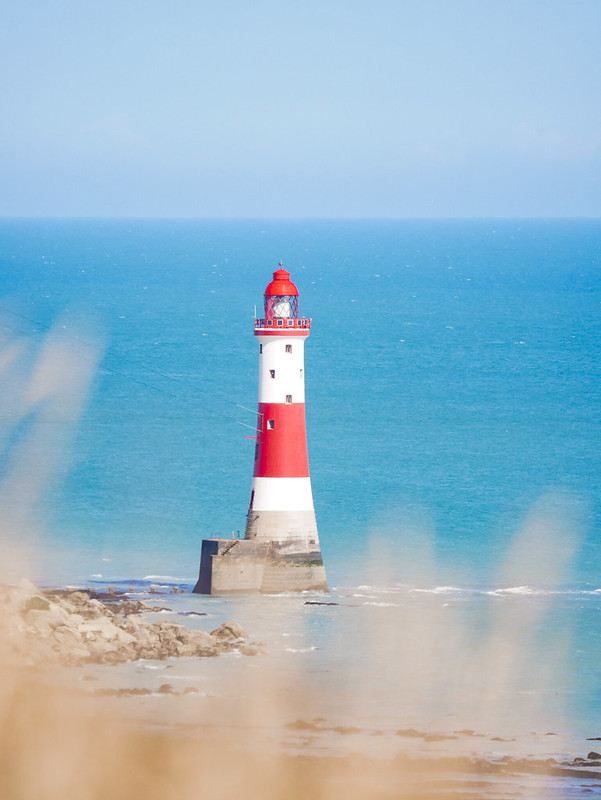 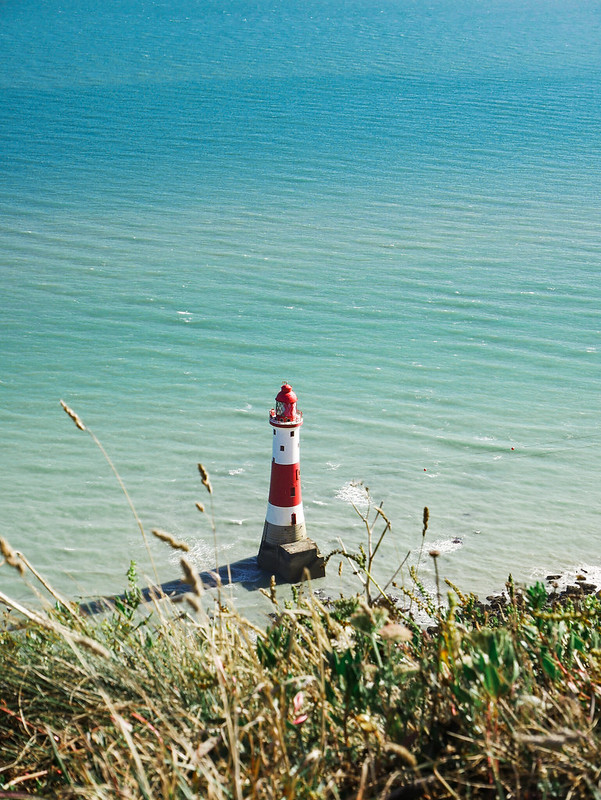 As beautiful as Beachy Head is, there’s a darker side to it and sadly it’s been the location for hundreds of suicides. Along with the Golden Gate Bridge in San Francisco and the Aokigahara forest in Japan, it’s one of the most common places in the world to commit suicide.

We got a view of the lighthouse from both sides and it’s candy colours made a beautiful contrast against the azul sea. By this point we were pretty exhausted and we still had over an hours walk to reach Eastbourne. The cliffs gradually shrunk in size and were replaced with bushes and eventually we could see civilisation – Eastbourne was ahead of us. I’ve only visited the town once or twice in my life but it seemed really nice with so much coastline and easy access to the Downs. When I checked the train times I realised we had ten minutes to catch the next train or a thirty minute wait so once again we decided to run for the damn train and we stepped onboard with a minute to spare and sweat dripping down our foreheads! 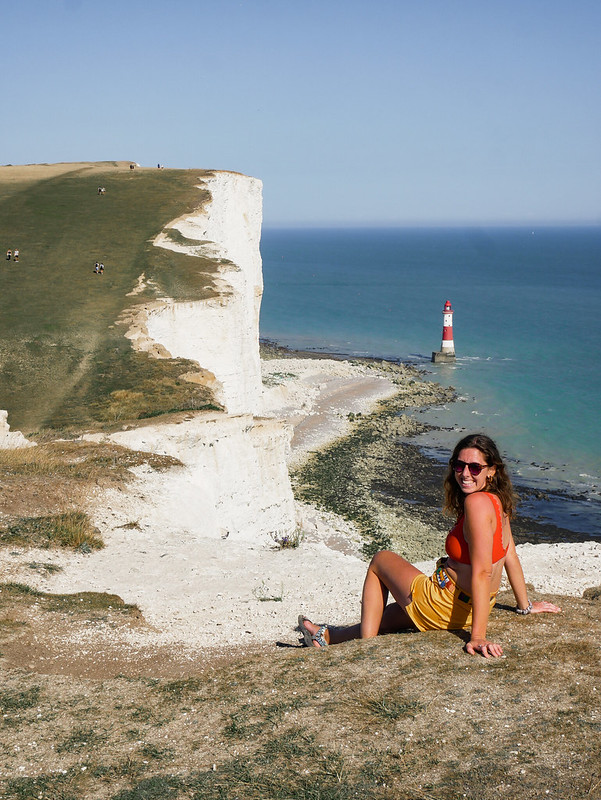 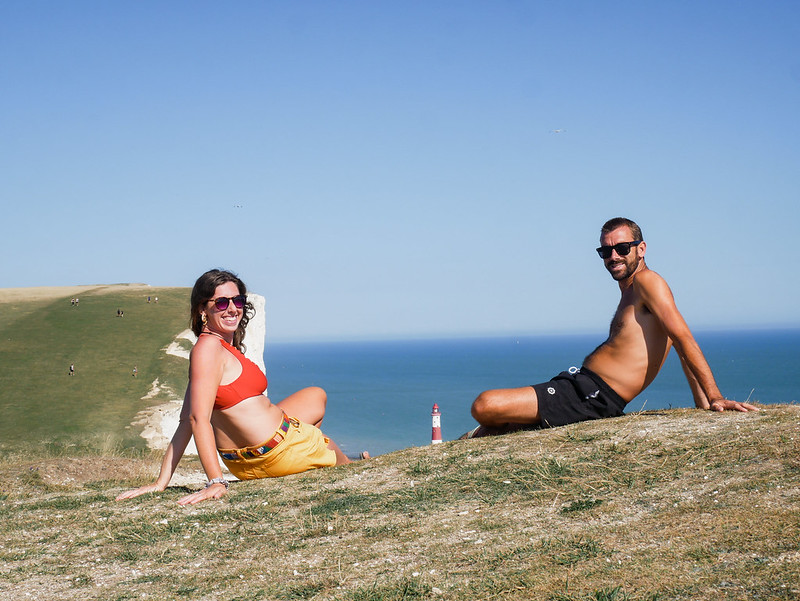 We didn’t get home until 7:30pm, absolutely shattered and sun roasted. My chest and neck were bright red – even though I had asked Craig if I was catching the sun during our hike. Now I look back at the photos of me and can see I was already the colour of a ripe berry at the half way point. But we did have a wonderful day and were reminded how beautiful England is – although I still prefer Norway….