For just £12 we caught an overnight train from Cairo to Aswan. We had large reclining chairs but the air conditioning was on full blast so we shivered the night away. The hostel we booked was actually 6km from Aswan in more of a local neighbourhood so we hopped in a taxi. On the way we passed an Australian guy called Liam who we’d met at our last hostel in Cairo. He caught the fancy sleeper train where you get a flat bed in a cabin but at the cost of £60!! It turned out he’d also booked to stay at ‘David’s Hostel’ seemingly the only place for backpackers in Aswan.

It certainly wasn’t a luxury place, our bedroom was basically a child’s room with a handmade, brightly painted bunk bed that was on the verge of snapping with one side resting on a mini bracket. The shared bathroom didn’t have any soap but the little kitchenette tried to make up for that by providing TCP/Iodine instead! But, no one came to this hostel for luxury, we came for David who was the most helpful host.

Before we’d even checked in, two French girls said they were going to Philae Temple and asked if we wanted to join. It involved a taxi and a boat to reach so the more people meant it would be cheaper for everyone. I actually hadn’t planned on visiting this particular temple which sits on an island in the river Nile, but we thought to hell with it and tagged along.

Three of us hopped in a tuktuk to the port and then we all tried to get a boat for the right price. David told us it would be 200EGP for the entire boat and we happened to meet a Russian/British couple on their own who were struggling to barter the price down. So now there were 7 of us wanting to share the boat and the man in charge was so stubborn. He wouldn’t budge on the price, quoting 300. We really tried for a long while and in the end we had no choice but to agree on 300, with a pathetic compromise to spend an extra thirty minutes on the island (totally not needed). I thought the French girls had planned this trip and confirmed all the prices with David, thats why we left it up to them to give us any info. Turns out there was a sign by the boat port saying the set price for a boat was 175EGP so David said 200EGP which included the tip – and he also said if they try to overcharge us we should go straight to the tourist police – but we didn’t find any of that out until our day was over. 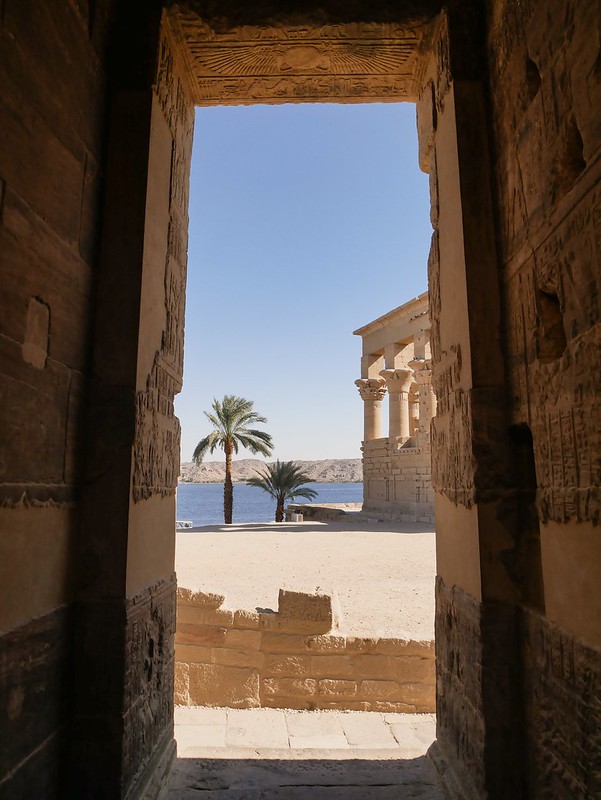 Anyway, we cruised along surprisingly clear water to a palm tree dotted island that housed Philae Temple. It was actually moved to this island from a different one after being continuously flooded due to the Aswan Dam. The temple was built about 2000 years ago and is considered to be the last built in the classical Egyptian style. 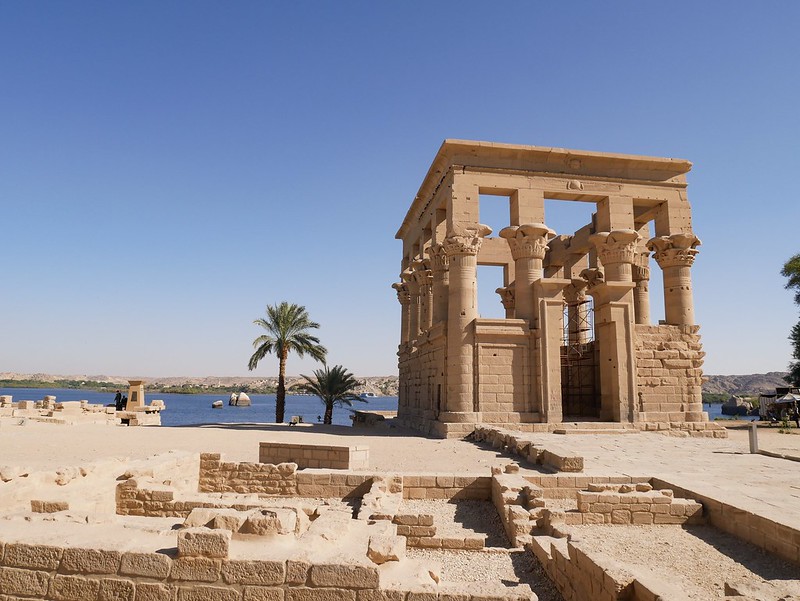 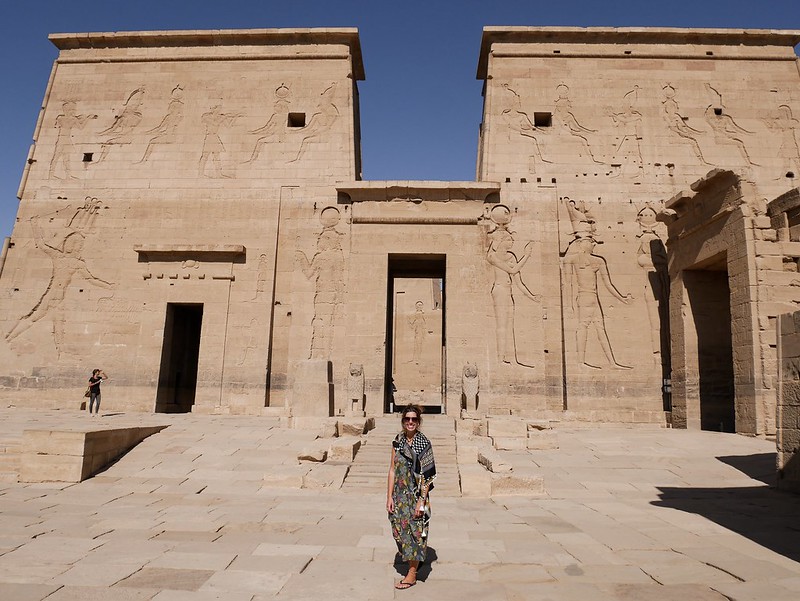 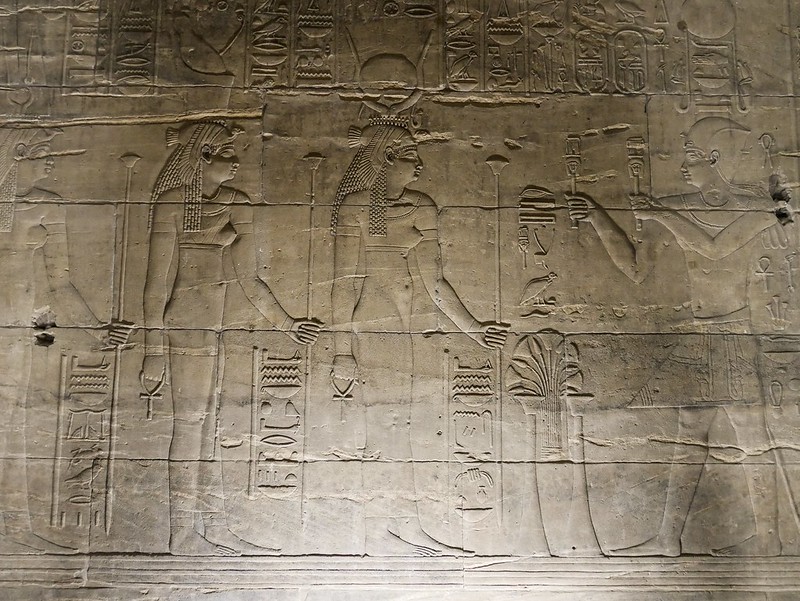 There were beautiful carvings across every surface on the interior and exterior walls, all so well preserved it looked like they’d been carved recently. It was very pretty but to be honest we could of left it off our itinerary and saved a lot of money – we were already ‘templed out’ of Egypt. However one thing we did enjoy about our visit was the peacefulness of the island. There were only about ten tourists there and no locals except for the guides and guards so it was the first place we’d visited where we could enjoy some serenity. 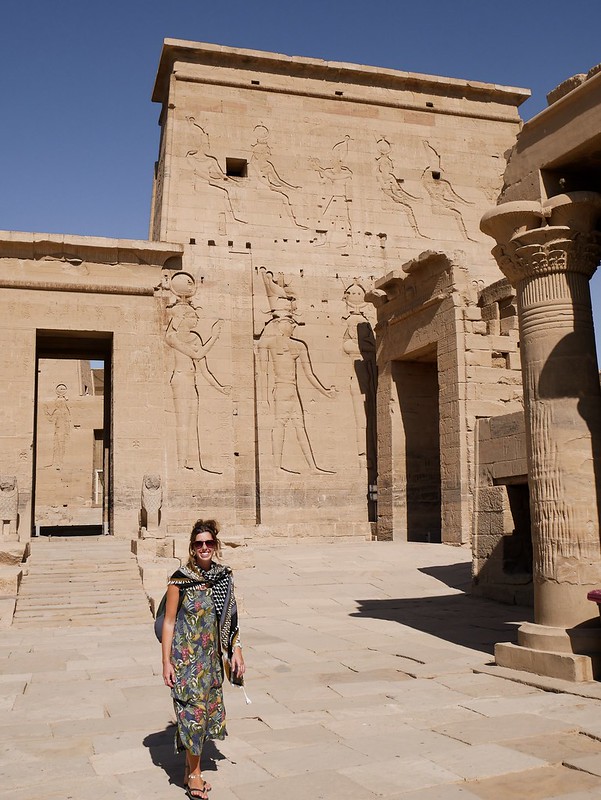 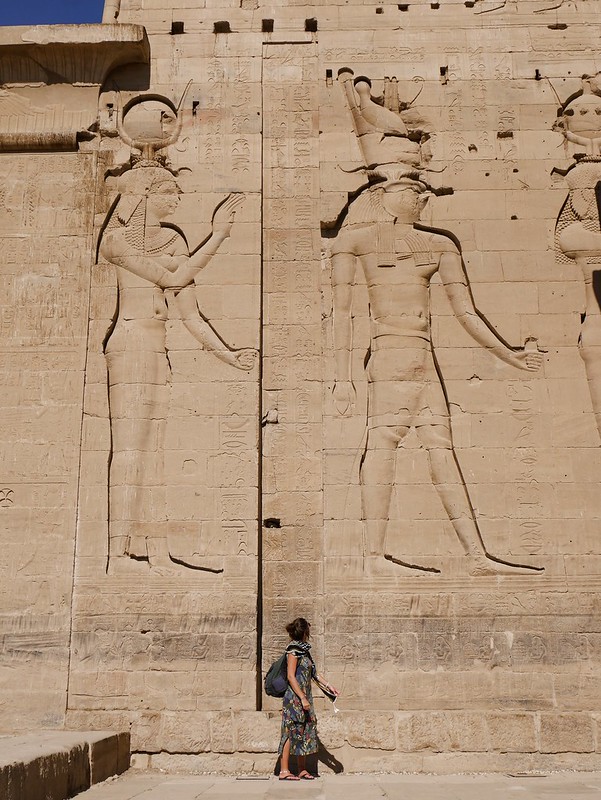 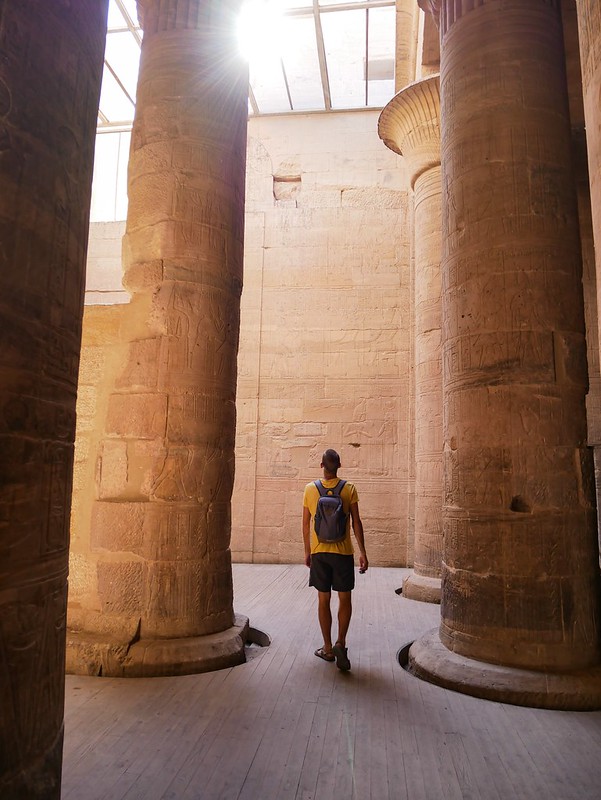 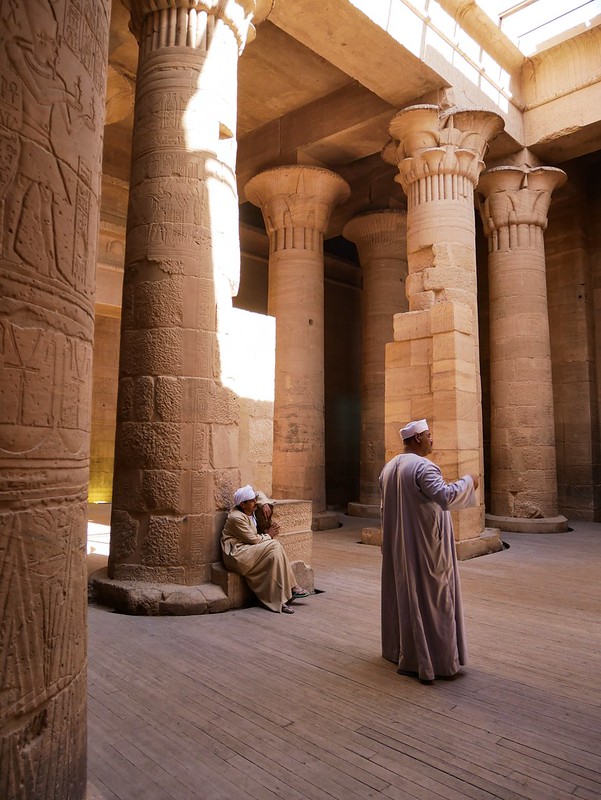 Once we got back to the mainland the French girls said they were going to the Nubian Village which we needed a taxi to reach – cue more bartering. Thankfully Liam had WiFi so we simply messaged David who gave us the taxi price. There were 5 of us plus the driver so we took it in turns to sit on each other’s laps while the driver pumped out his music, waving his arm around enthusiastically. Then he dropped us off at the completely wrong location. He was very apologetic though and ten uncomfortable minutes later we arrived at the right place. 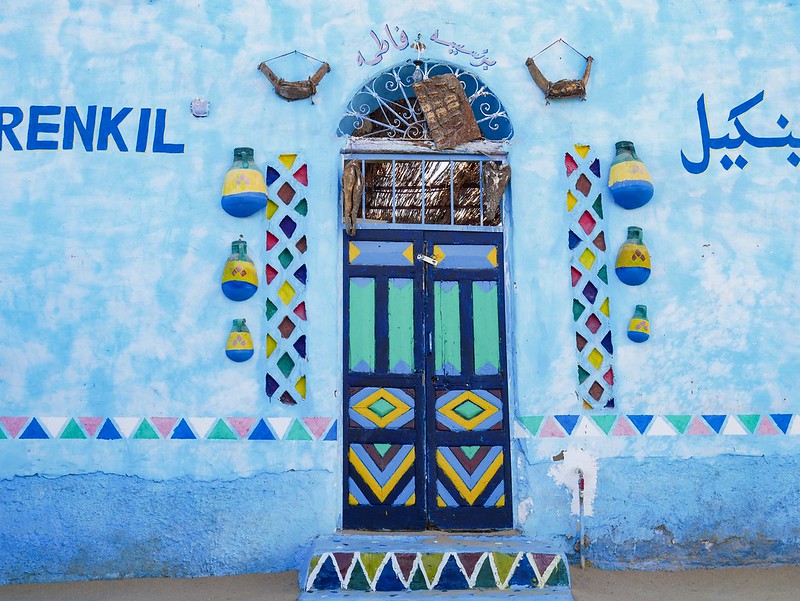 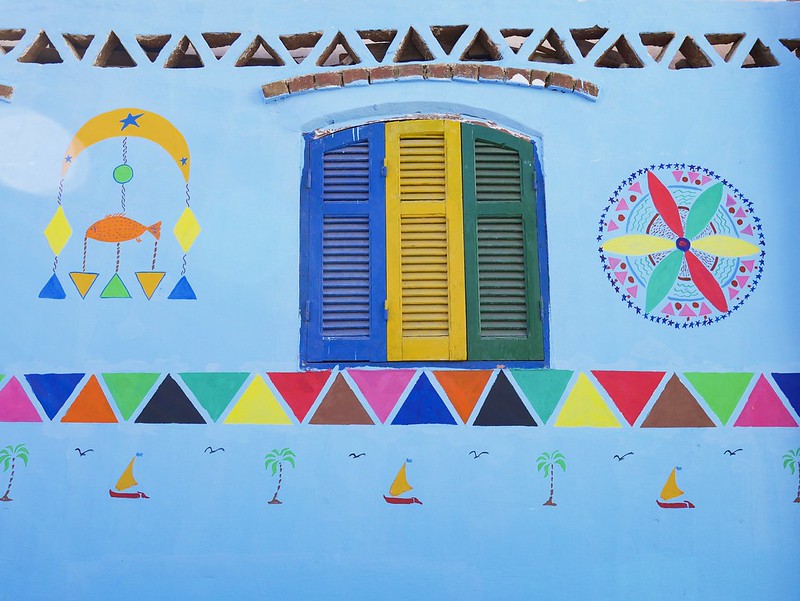 The Nubians are indigenous Africans that have inhabited the central Nile valley from southern Egypt into Sudan for thousands of years. They were around before the ancient Egyptians and have much darker skin. They like to paint their homes bright colours, predominantly blue with rainbow detailing and I was really excited to see the colourful buildings. 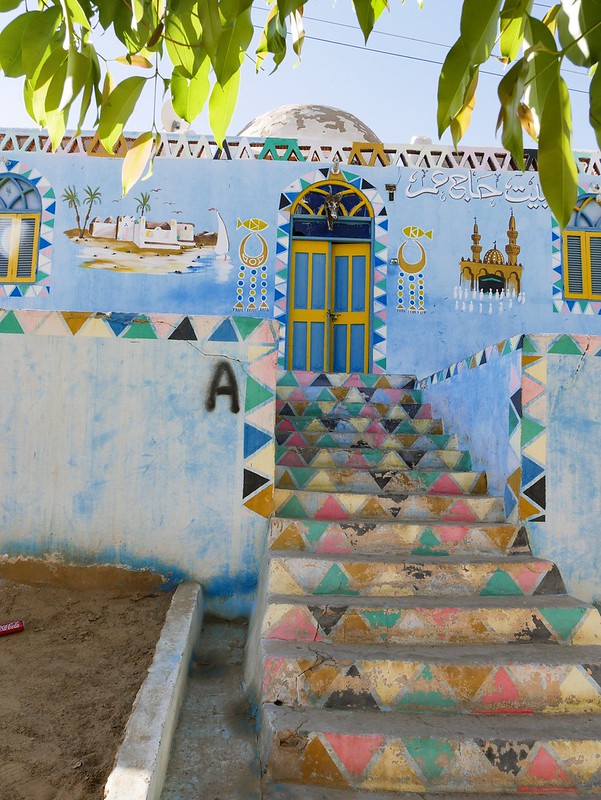 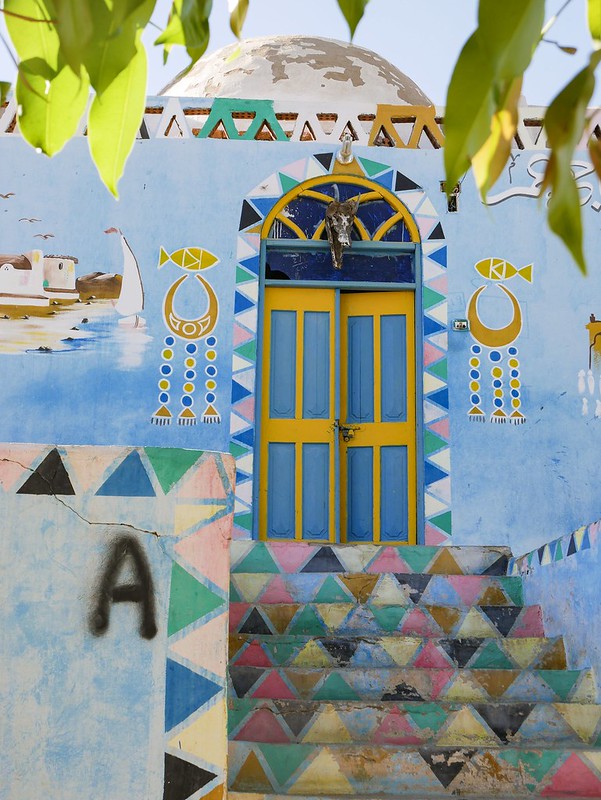 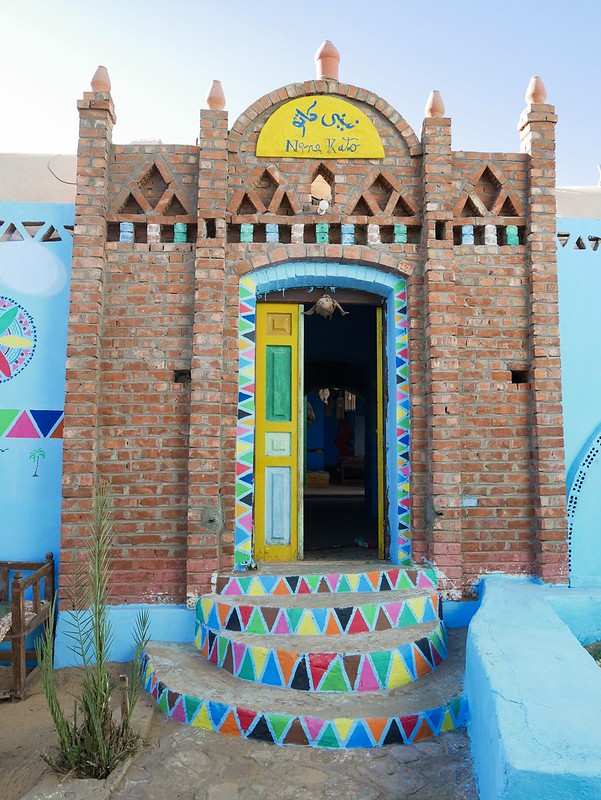 The village was like an outdoor museum filled vibrant colour and symmetrical patterns. Many homes had mummified crocodiles above their doors which are fished from the Nile as they are considered to protect from the evil eye. A dusty road running parallel to the Nile led us through the village and locals got around on camels – looking like royalty as they sat so high above us. There were lots of shops selling spices and delicious smelling mango tea but we didn’t dare ask the price. The locals tried to instigate conversation and therefore sales by asking us if we knew what each spice was. I took it as a very exciting quiz, shouting my answer before anyone else could and making the shop owner rethink his sales tactics. 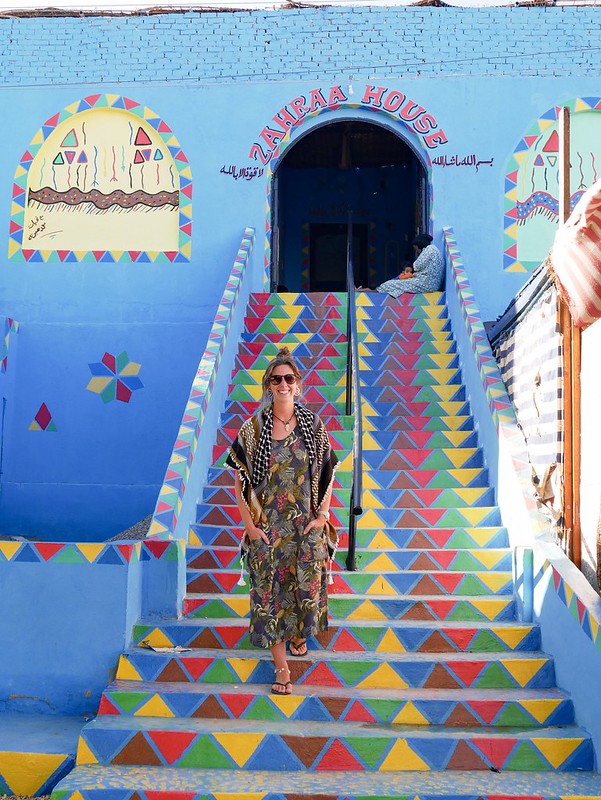 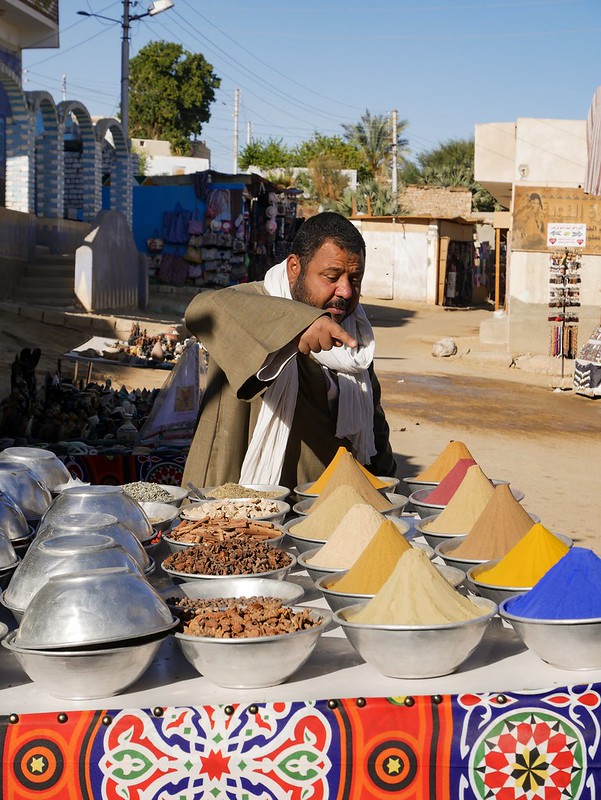 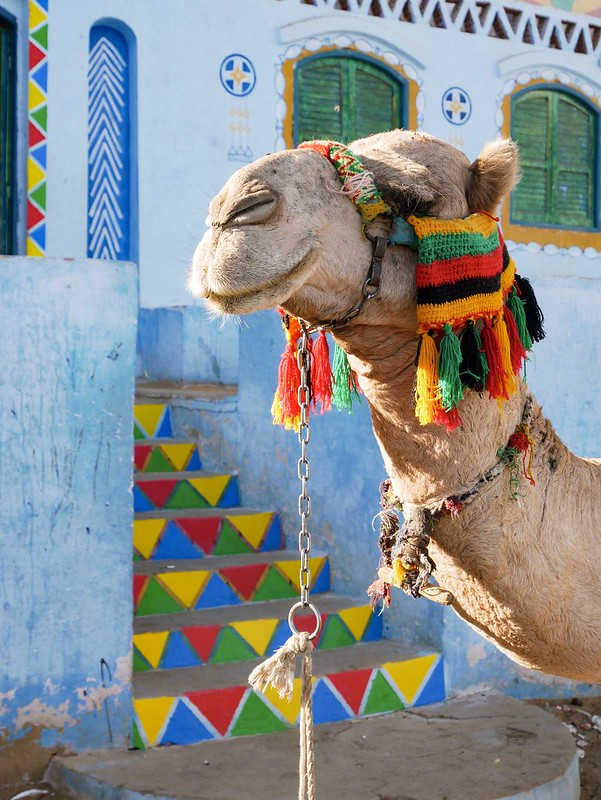 Our taxi man had asked if we wanted him to stick around and we thought (from more misinformation) that there was a ferry across the Nile for 5LE which would take us back to our village. Well, there wasn’t and the men were asking for an extortionate price for the 1km journey. So for the third time we had to barter our way back with a taxi. It was very frustrating how they laughed when we said how much we wanted to pay, they acted like we were mad – fast forward ten minutes and we were all piled into a taxi for that exact price. Turns out the 5LE boat the girls told us about was in fact a minivan! So that was a shame but at least we shared the taxi price between all of us. We had to get an early night as the following morning we were visiting Abu Simbel which required a 3:40am alarm!!! 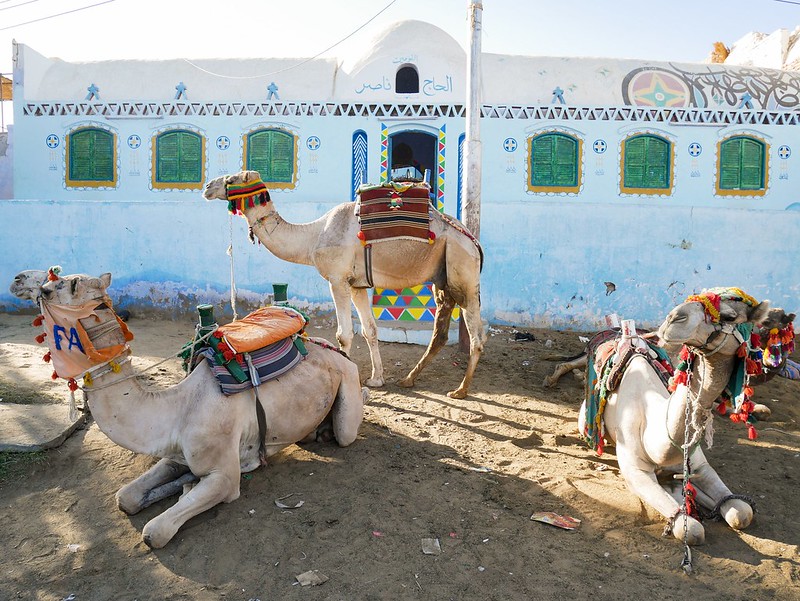 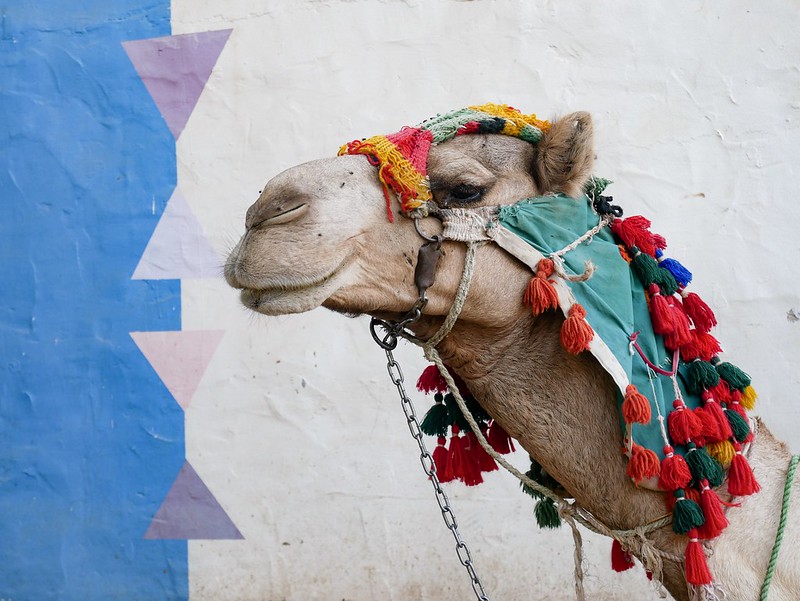 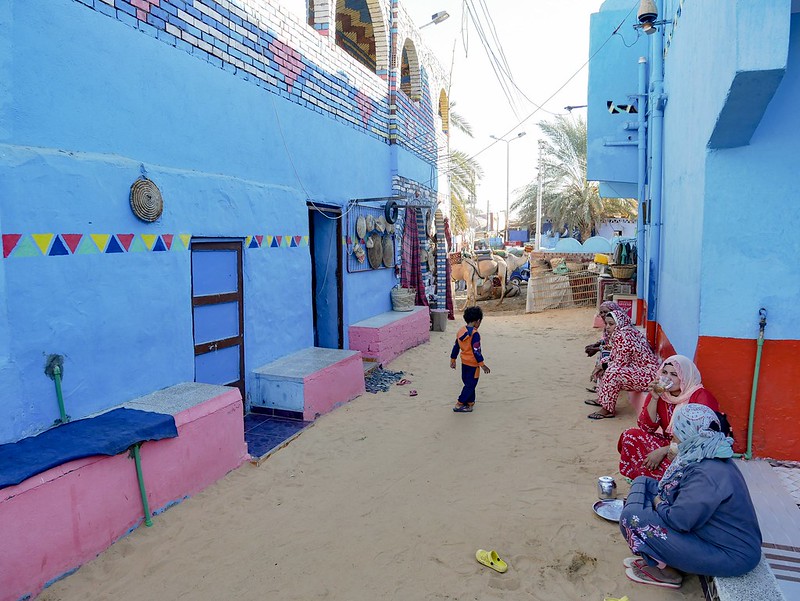