At 4am David our hostel owner walked us down the dusty street past sleepy dogs to a small bus waiting for us. We had a long four hour journey (each way!) to Abu Simbel which is in the far south just 35km from the border with Sudan. It’s said to be one of Egypt’s top sights so we weren’t the only ones there and at 8am there were already dozens of buses and vans in the parking lot. A large group of Asians were ahead of us so we had to do some stealthy speed walking to overtake everyone to the ticket booth. We almost had to run down the path to beat the next group and try and capture the sight without people in the way.

The temple was built around 3000 years ago…which is hard to fathom. There are actually two temples and the largest one had four huge statues of the pharaoh sitting down. The temple was designed to face a certain direction so on two days a year, October 22nd and February 22nd, the sun beams through the entrance and lights up three statues inside. Historians believe these two days mark the coronation and birth of the king Ramesses II. 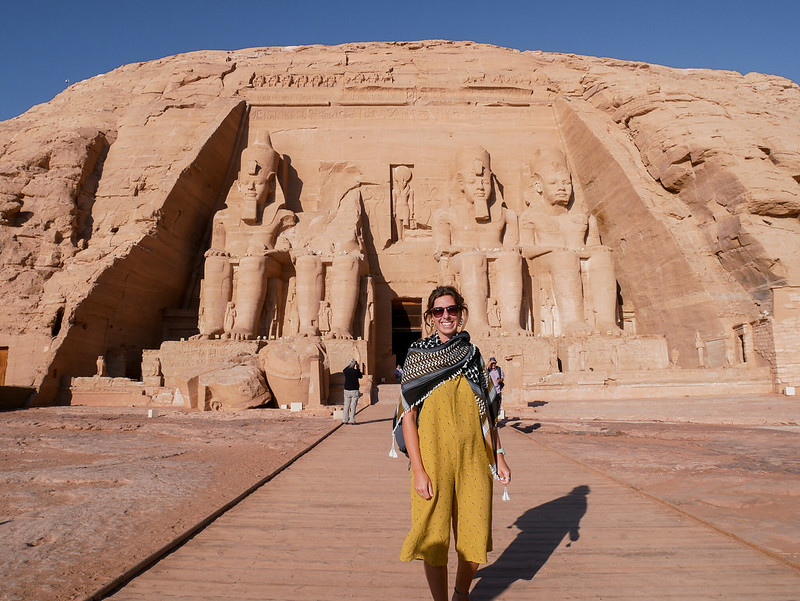 But the thing that made it so impressive, at least for me, was the fact that the temple was moved in the 1960’s to avoid it being flooded from the Aswan dam. The temple was originally carved directly into a stone wall with statues standing 21m tall. I can’t believe the relocation was not only considered but it actually worked!! They used saws and metal wires to cut the temple into slabs which they moved 64 meters above and 180 meters west of the original site. Each piece was laid in a sort of open museum where they were numbered to make sure they were all put back together correctly. The original location is now completely underwater so they certainly made the right choice. 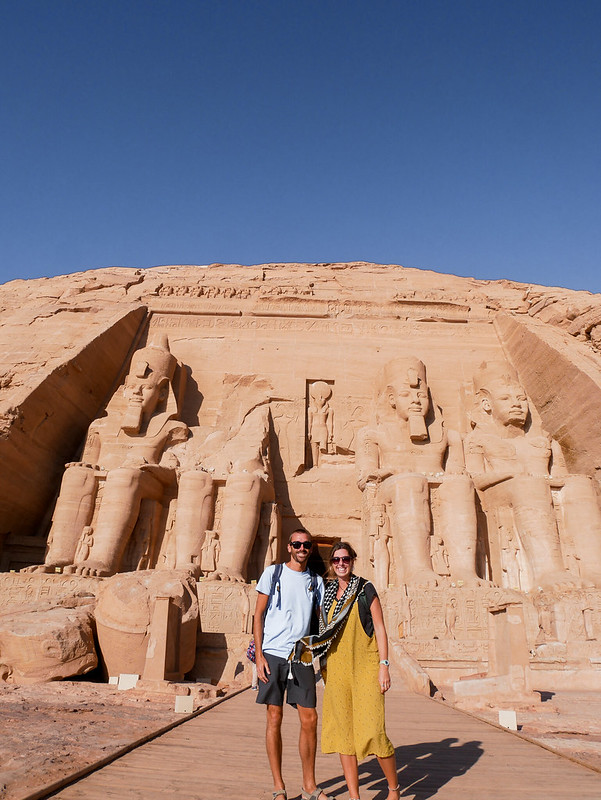 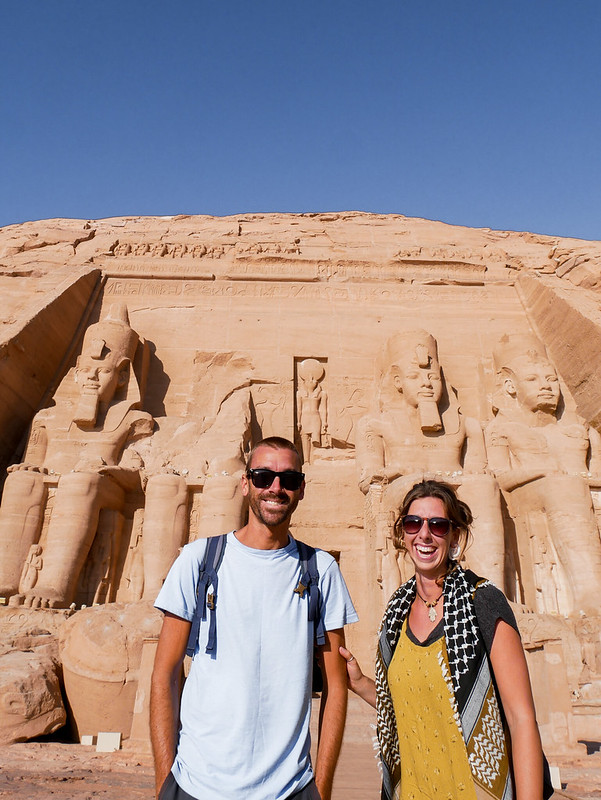 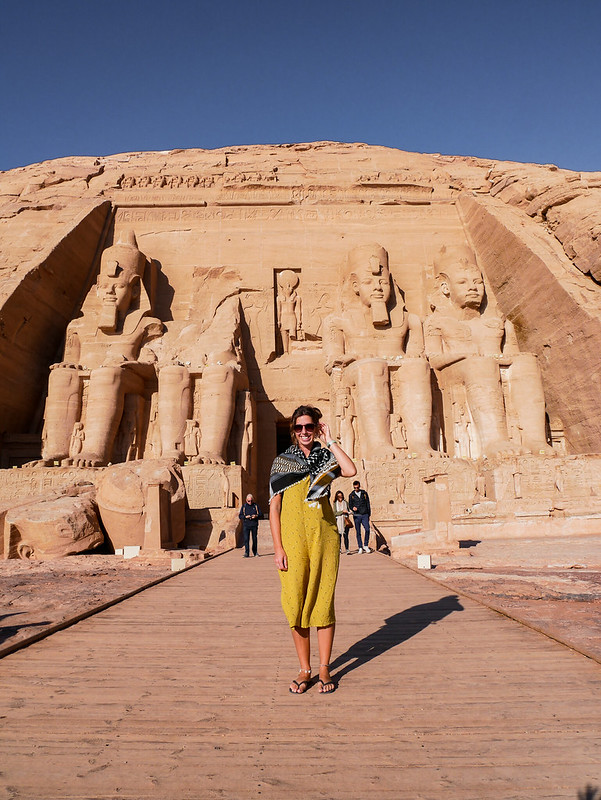 Inside the temple there were many rooms filled with statues and carvings. Not a single wall was left without art or stories carved in and it’s important to note that this interior was also cut into pieces and put back together!! The smaller temple was built for the queen Nefertari, the front had two statues of her and four of the king, each about 10 meters tall. 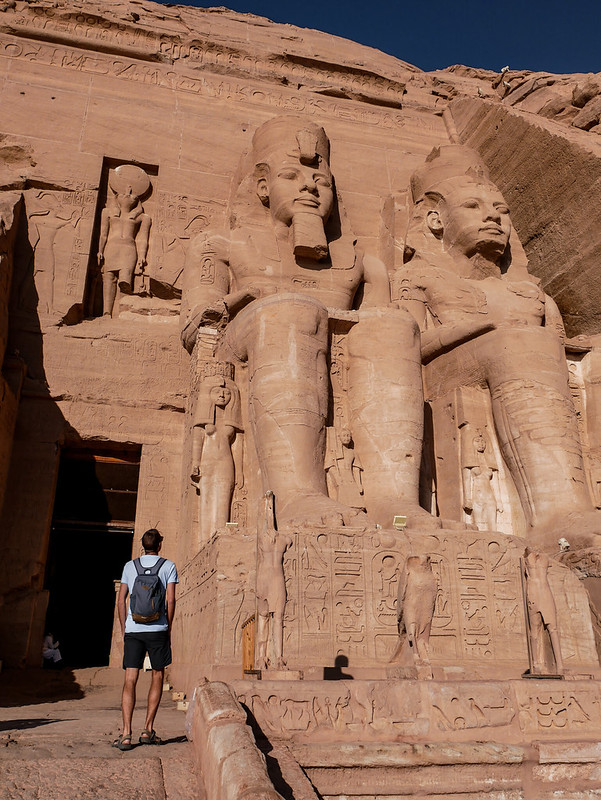 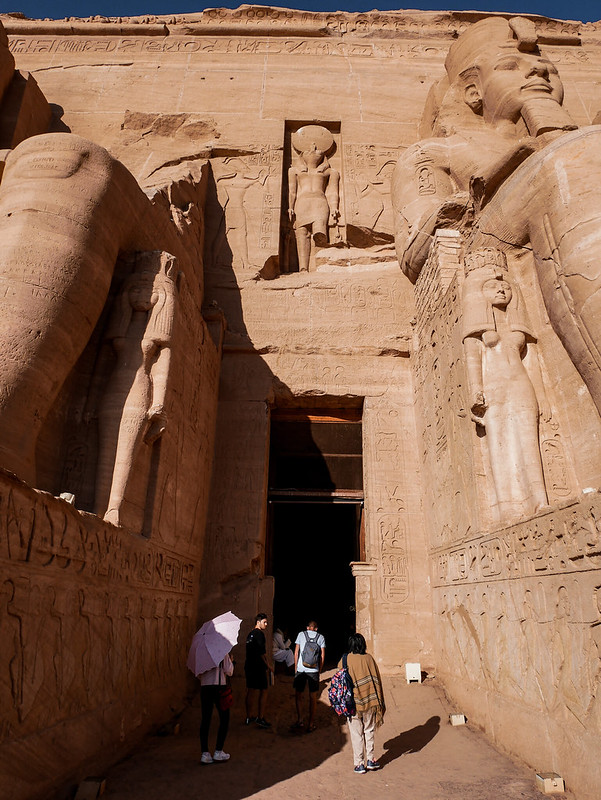 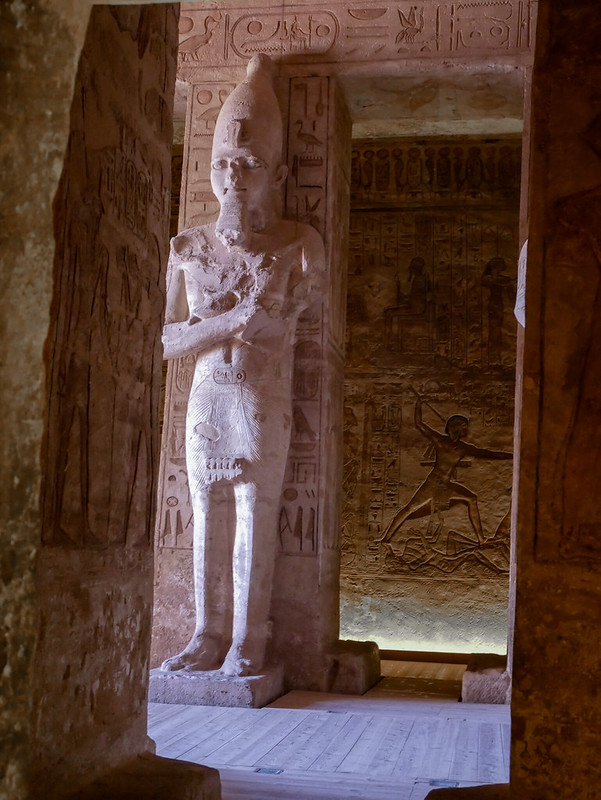 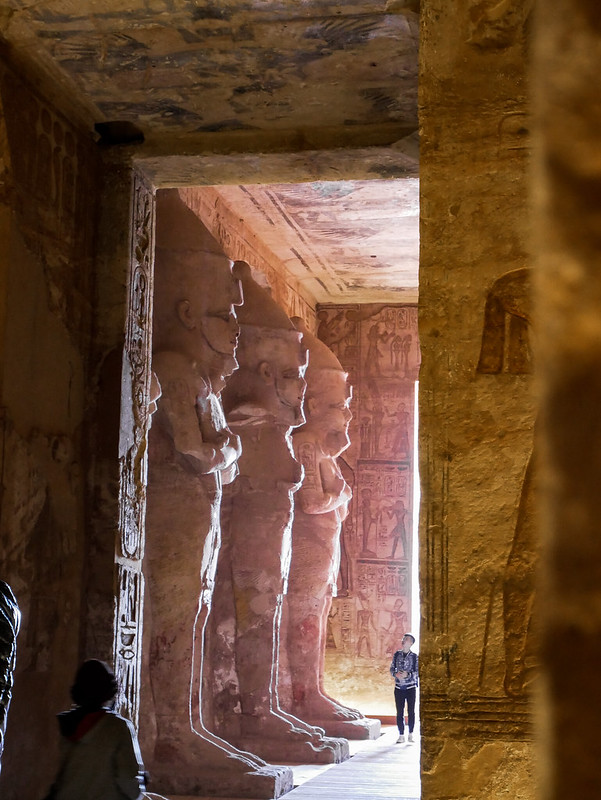 We had just under two hours at the sight and as we exited we had to walk via all the gift shops. The sellers were relentlessly asking us to buy shit we didn’t want and standing in our way. One even grabbed my arm when we walked past and I angrily shouted “DON’T TOUCH ME”. It’s a pretty common rule around the world, but particularly in Muslim countries – don’t touch someone of the opposite sex. He apologised but still tried to demand I buy something afterwards. Egypt sure is testing us.

I’m glad we visited Abu Simbel but boy was it a long journey, 8 hours sat in a bus with nothing but barren desert to stare at. David provided us with some sort of take away breakfast which consisted of dry hot-dog buns with a tiny bit of spreadable cheese inside. Craig spent a good five minutes trying to give his food to a nervous dog while we giggled from the bus as the dog kept outsmarting him and going the opposite way. I asked David why the trip started so damn early – it’s because almost every tourist visiting the temple is on an organised trip and they need to return to Aswan by 2pm to either catch a flight or a cruise up the Nile. Thanks rich people! 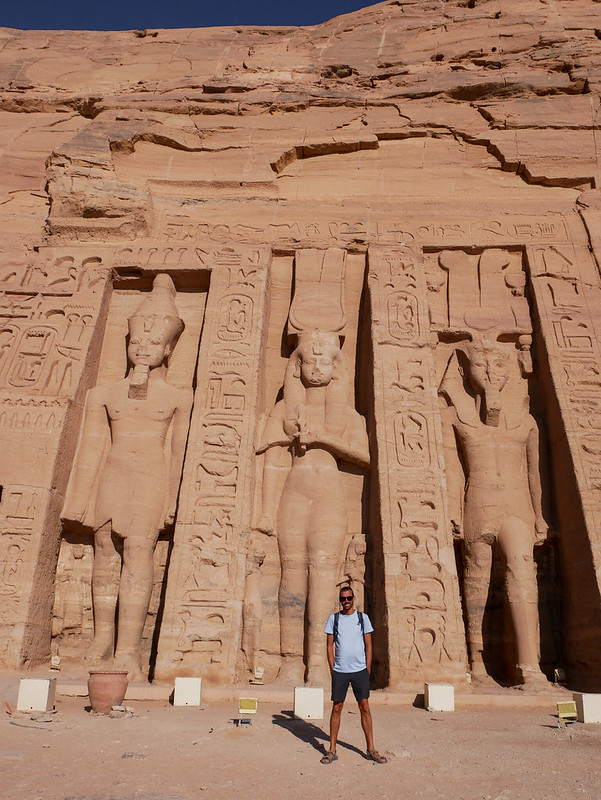 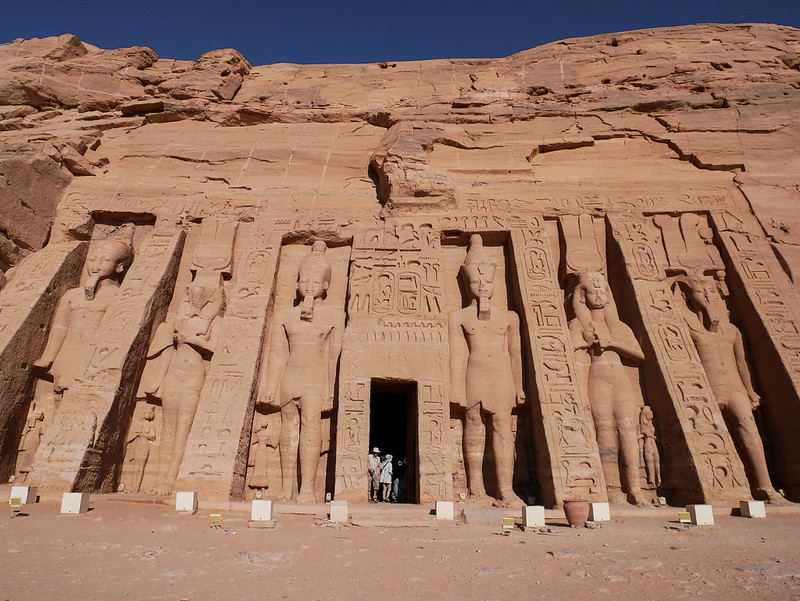 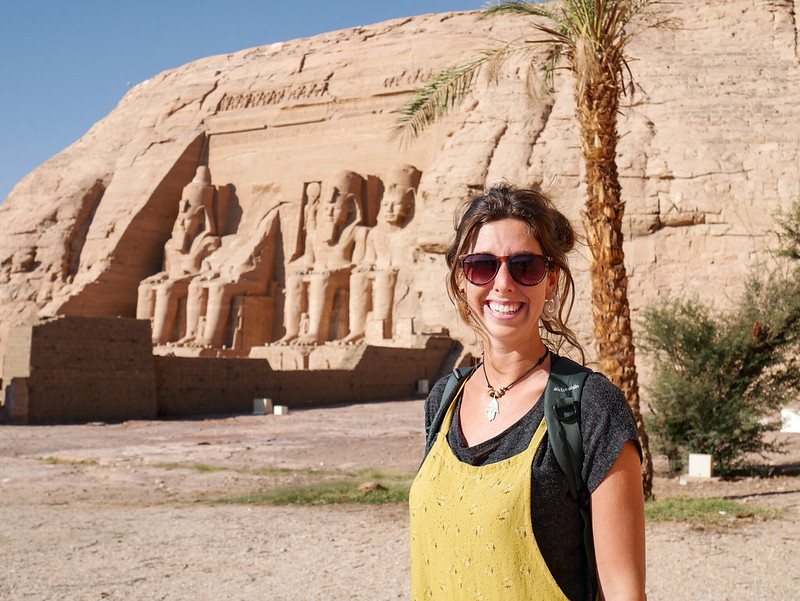 After a couple hours mincing around the hostel we all agreed to go on a felucca ride which is a traditional sailing boat. We timed it for sunset so we spent two hours sailing around islands on the river Nile. I asked David if he swims in the Nile as I’d read many locals do but it can be dangerous for tourists as a nasty parasite thrives in the still water…not to mention the crocodiles! He shot down my guide books information in a very funny manner, by grabbing a glass, scooping up a cup of fresh Nile water and downing it in one. The sky turned a fabulous purple colour and reflected in the water. Apparently we were very lucky to have a windy evening, sometimes the boats just sit in the Nile if there’s no wind. 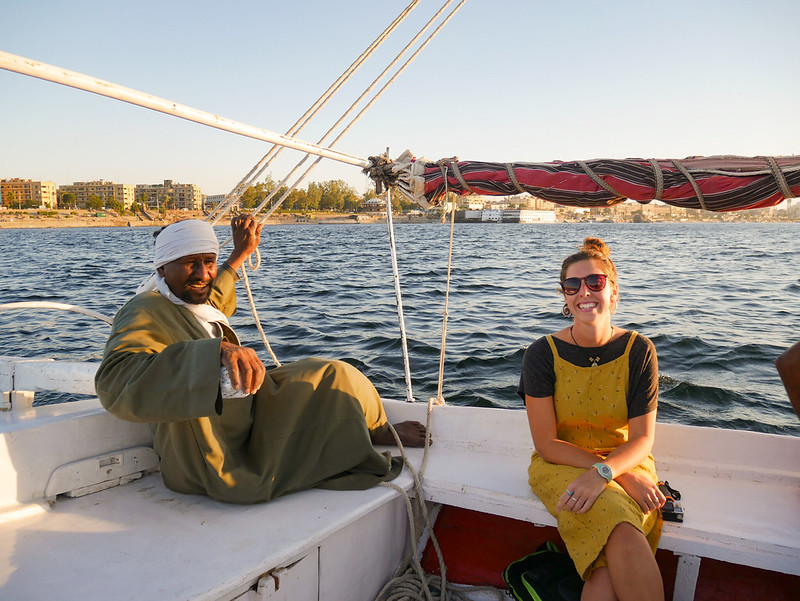 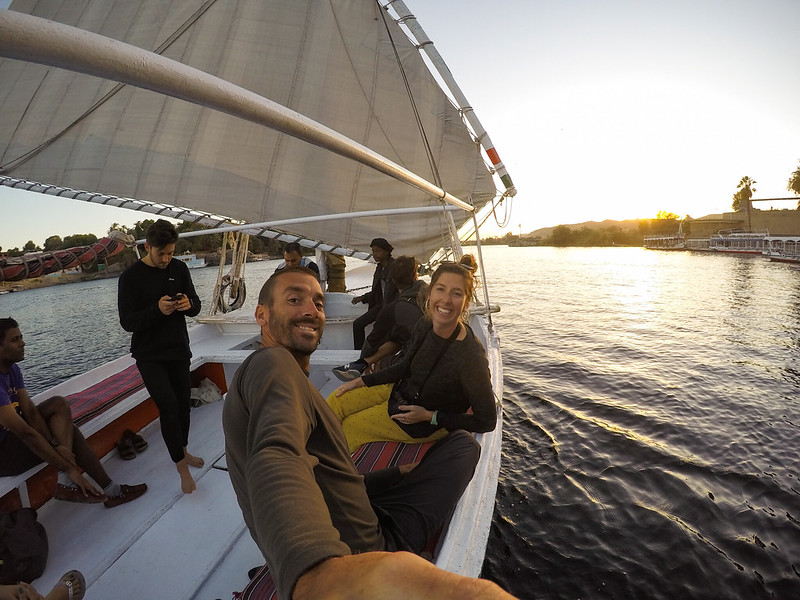 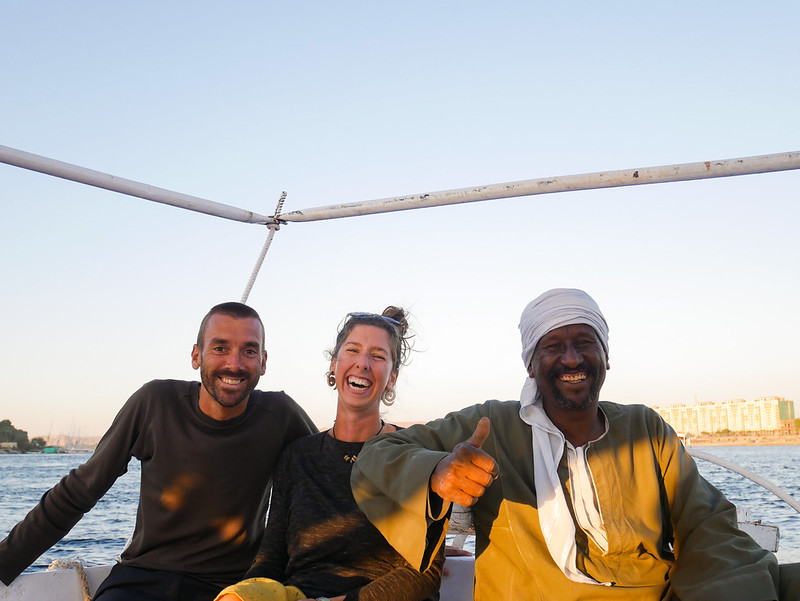 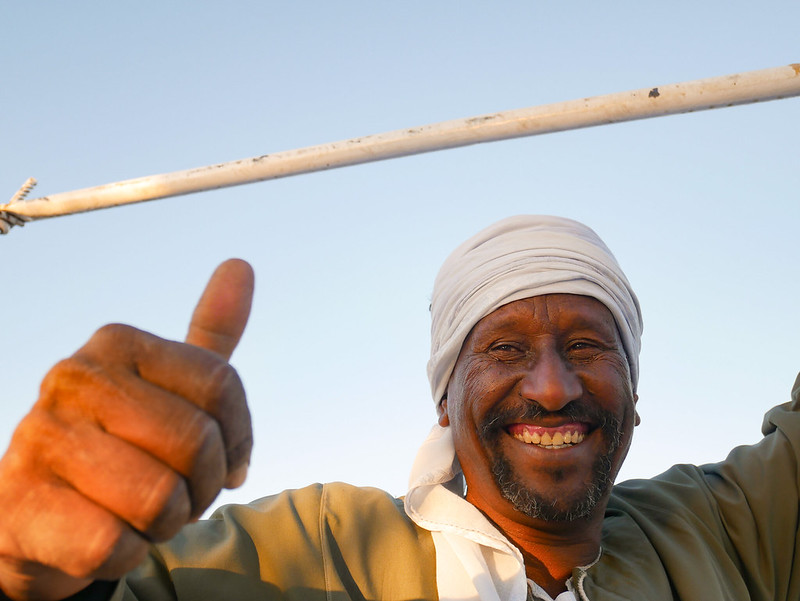 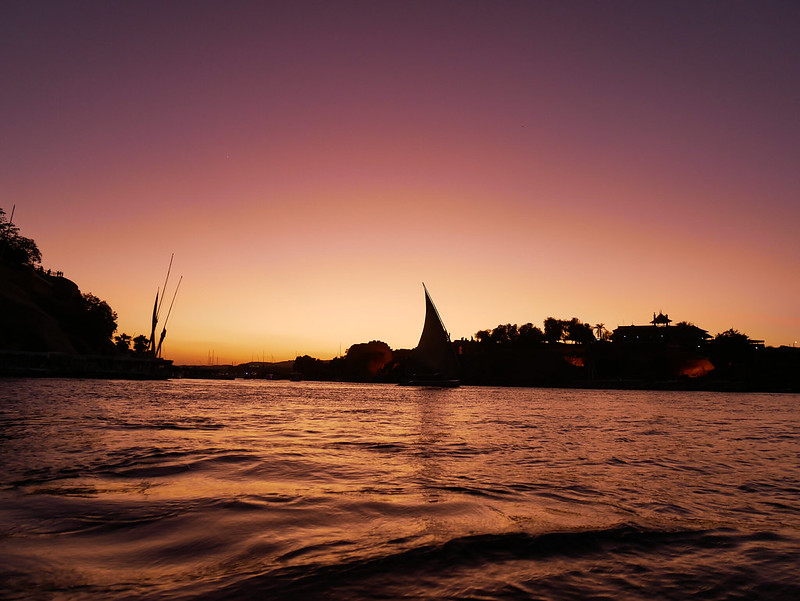 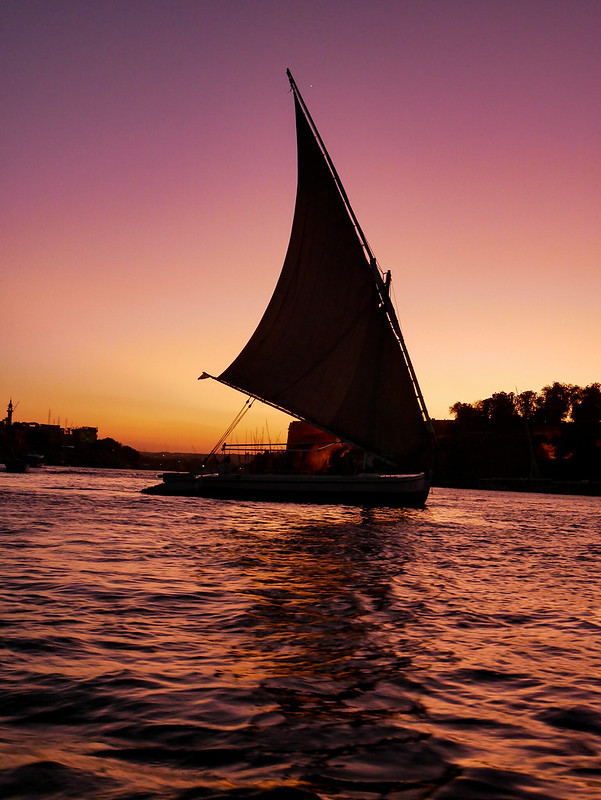