The next day we decided to visit Old Cairo, also known as Islamic Cairo. We walked from downtown to Khan-El-Khalili which is where the souqs (markets) are. On the way we seemed to walk through the furniture neighbourhood where narrow alleys were filled with tacky upholstered chairs. Seemed like a really stupid area to focus on furniture when vehicles could barely drive through to do deliveries.

The souq began with the local shops selling ladies clothes, scarves, bedding etc. The pathway between the stalls was COVERED in rubbish. I couldn’t believe it, I mean literally we couldn’t step around the rubbish it was everywhere. We watched shops brush the plastic bags etc from their doorstep into the central path and that’s where it remained. We eventually entered the main ‘tourist’ souq where suddenly the paths were clear of rubbish. I wasn’t inspired to buy anything from the shops, it was all tacky unlike in Morocco where I wanted everything. 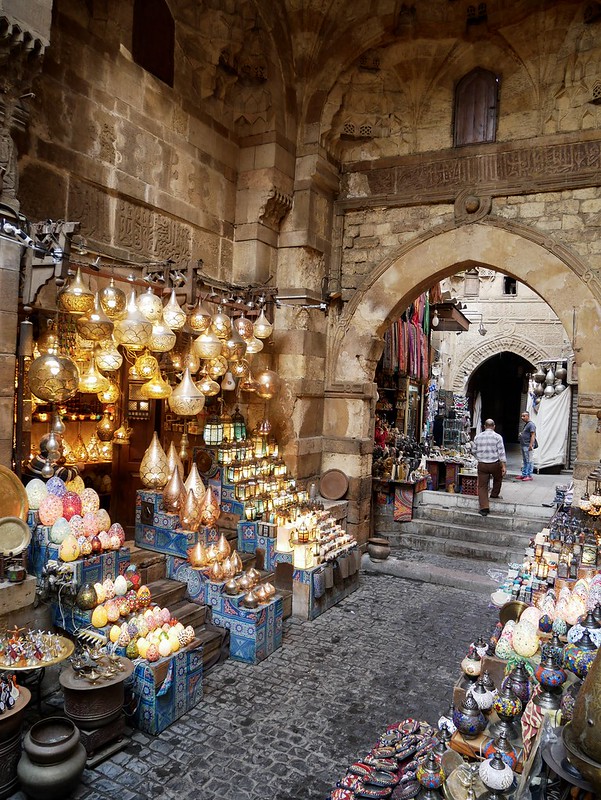 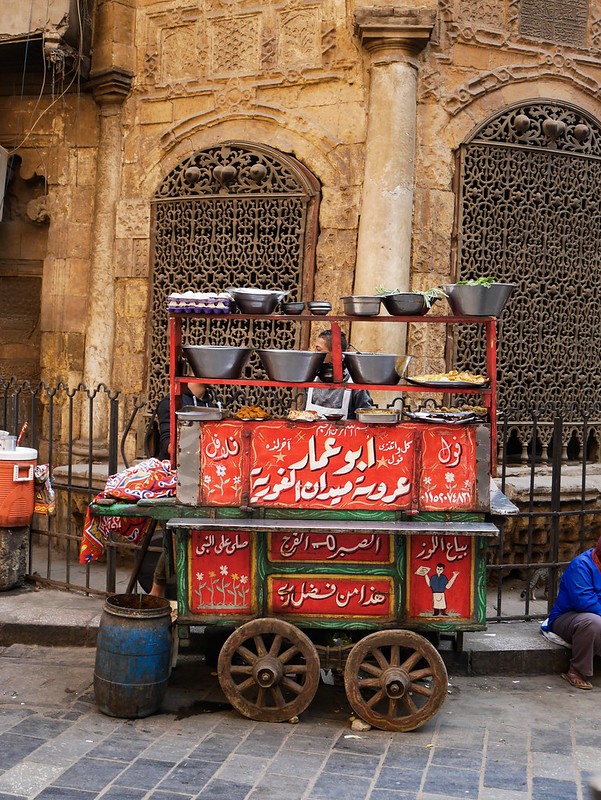 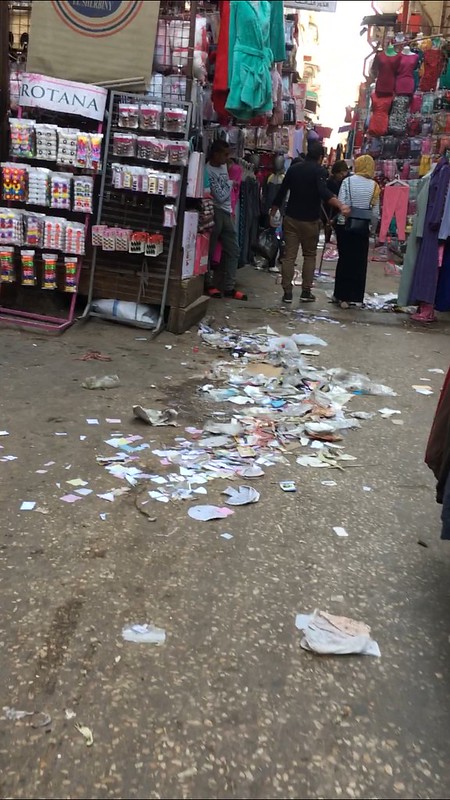 We left the tourist area and wondered under a big wooden structure where the sun pierced through holes in the ceiling. The locals were all dressed traditionally around here with men in long gowns and head scarves wrapped like little turbans. We ended up in a food market which was pretty foul, I didn’t even want to buy a banana from the area. There were meat stalls everywhere with the fleshy bodies of the animals hanging on hooks. Nothing out of the ordinary though as we’ve seen that in many markets around the world, they even have whole camel heads in Morocco. But the smell was so strong, there were flies and garbage everywhere and the people were shopping for meat while leaning their woolly jumpers onto the flesh. Fresh blood was dripping onto their sandals and then across the path was a cart full of goats heads which were a gross grey colour. 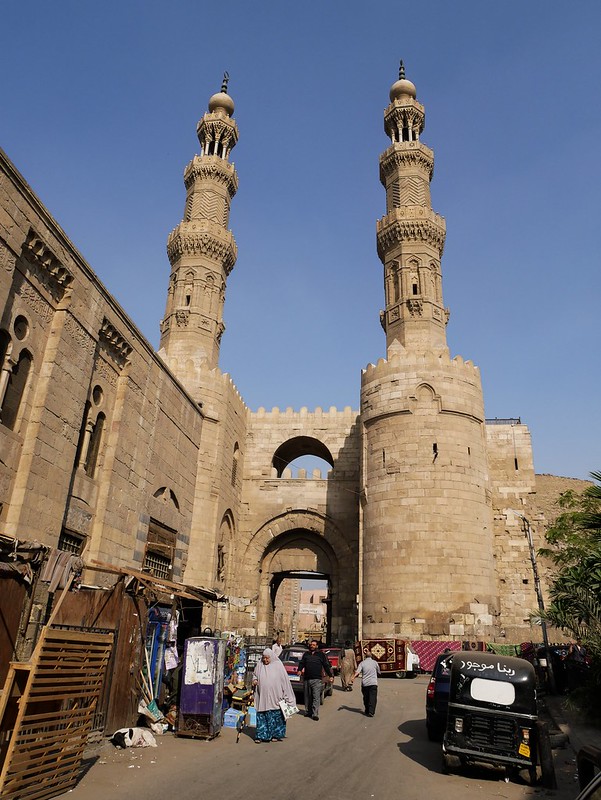 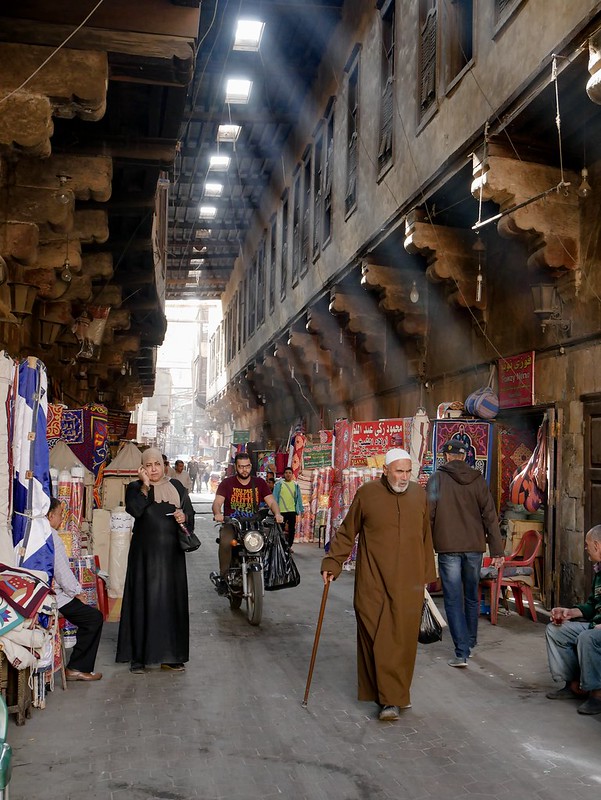 Our next stop was supposed to be the Mosque of Mohamed Ali but I didn’t realise it was inside a walled citadel. We ended up walking around the back and having to retrace our steps to find the entrance. It was a really long walk and when we got there we realised we had to pay to enter, and it wasn’t a small fee either at 180 Egyptian pounds ($12) for tourists. We kind of just said sod it as we spent so long reaching the damn place but I wish we hadn’t bothered. It’s cheap for locals to enter so there were kids everywhere and they were being so annoying. As soon as they saw us they shouted hello and if we said hello to one they all erupt and copied each other, screaming and giggling, laughing at the way we said hello and forcing iPhones into our faces for photos. We had enough issues with kids at the pyramids so this was the icing on the cake. We were so fed up and said no to everyone asking for a selfie as it felt rude and not friendly. Imagine being in a tiny English village in the countryside and every time you saw someone that wasn’t white you went up to them demanding a photo. In some countries it’s quite funny being the ‘tourist attraction’ but here it was goddam irritating. 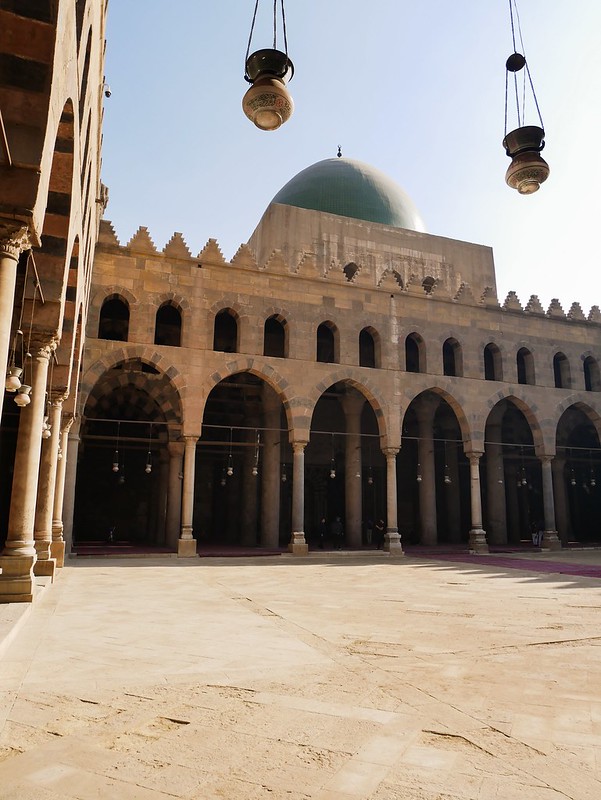 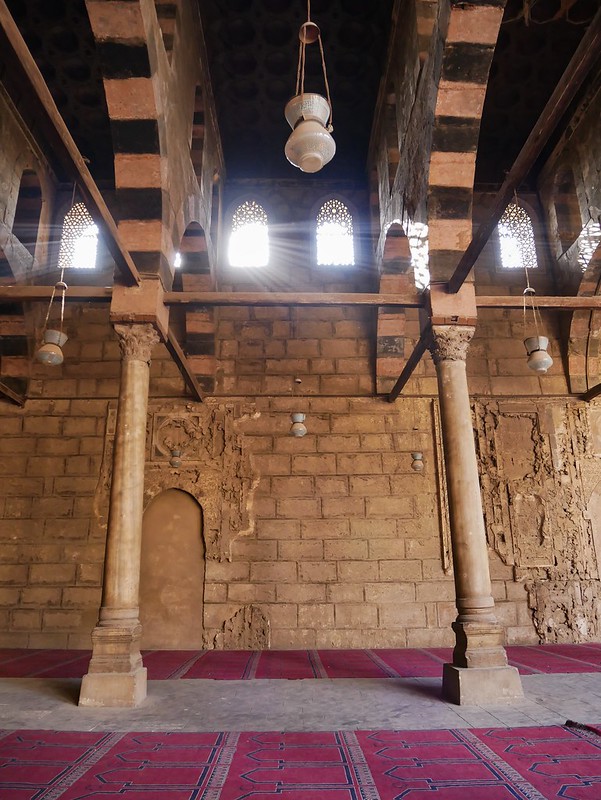 The mosque was impressive but the many domes atop it needed a good clean to really show it in its full glory. It was huge inside with an extremely high ceiling which was covered in paintings. The floor was all carpeted and seemed to act as a crèche for screaming kids. There was supposed to be a view of the pyramids from the terrace but the thick pollution blocked any chance of that. 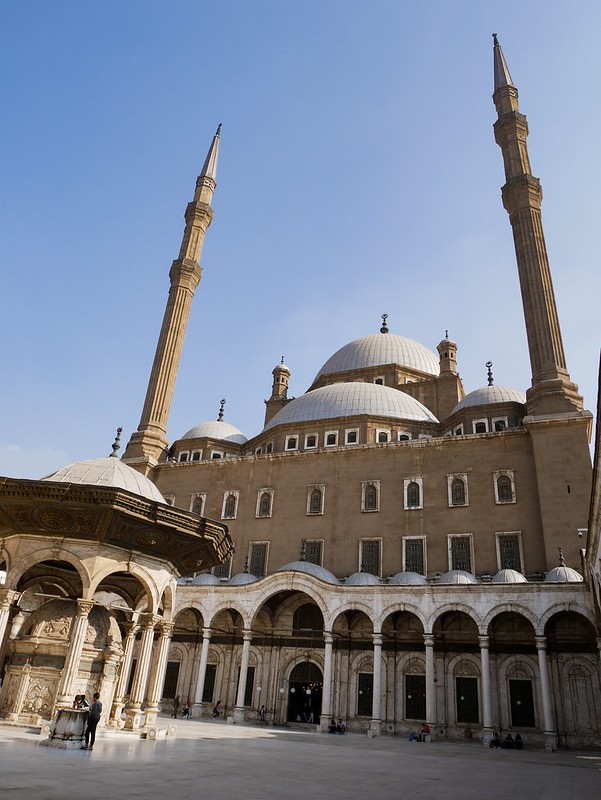 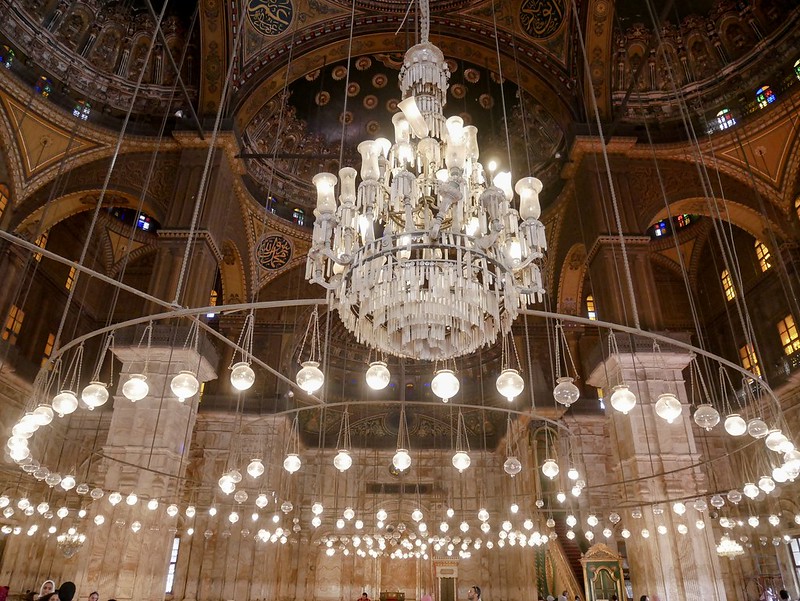 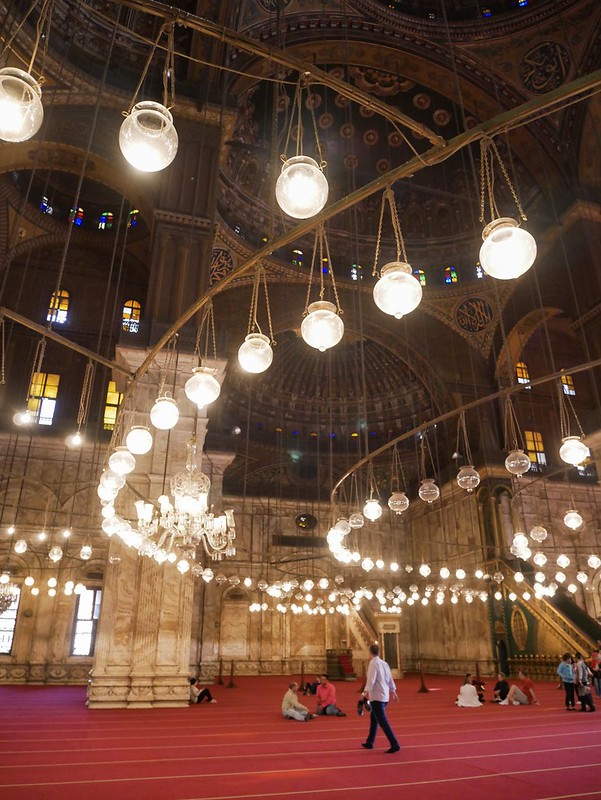 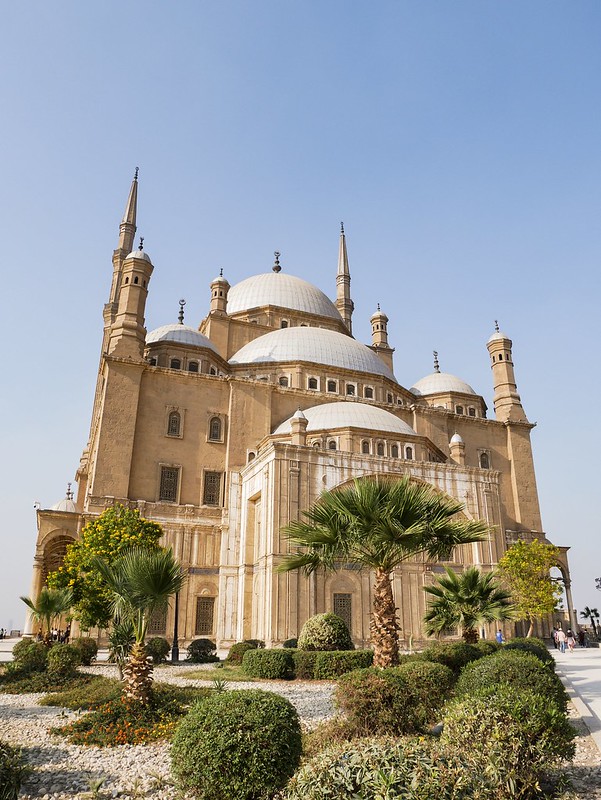 We caught a taxi back to downtown and grabbed some lunch. We watched from the restaurant as the staff swept the outside of their restaurant, moving the rubbish onto the road, and then a street cleaner came along and just picked up a few select pieces that maybe he could get money for, leaving the rest to blow in the wind. As we walked back a man appeared beside us and said ‘Welcome to Cairo’ we’d heard that a lot and most people had an ulterior motive for speaking to us. So we kept it brief. But then he asked where we were from and he said he had lived in Sussex, which was very specific so we were like wow we’re from Sussex. We chatted for a minute more and then he said he could guide us and my skin crawled. Everyone wants something from us and you can’t trust anyone or have a genuine conversation, it’s so frustrating. So we said we didn’t want a guide and sped up our walk to escape him and then he had the cheek to angrily shout after us “you don’t deserve a guide, you are rude people!!!” And then we stopped in our tracks and swivelled around to face him. I was furious. I said “you’re the one that started talking to us, we don’t want a guide and you have no right to call us rude, do you know how many times people try to sell us stuff we don’t want in this city?” and then he tried to say “I was offering a free service” BULLSHIT. Nothing is for free in this country. Ok the guiding could be ‘free’ but a hefty tip is expected. Boy were we angry. We actually had a very nice Egyptian doctor stay at our hostel and he felt sorry for us tourists, he apologised for the people in this city and asked us to please just remember the good things. It’s too late for that my friend, there’s too many bad beans in this place. Then as we walked to the subway with our luggage to make our way to the railway station we crossed the road when the green man said we could – yet still a car continued driving towards us until his bumper was pushing into our hand luggage. Good riddance Cairo.