Cairo is home to 20 million people – it’s a massive place that sprawls out, eating up chunks of dusty desert and swapping it for messy concrete slabs. We booked a hostel in downtown where there were fairly modern shops with fancy displays, although the mannequins all looked a bit fed up with slanted wigs desperately in need of a good brush. The buildings were covered in thick pollution and dust, as if each property was finished with a spray of adhesive to attract every particle of filth in the city.

The traffic didn’t stop for pedestrians, it’s not quite like Asia where you walk into traffic and hundreds of mopeds slowly move around you, here the cars seem to just speed up which is rather daunting. Our hostel was up six flights of steps and it was basically a large apartment with 6 rooms that they’d converted into a hostel. It was dark and filthy in the lobby, stray cats and rubbish laid on the steps up and a group of men were praying on some rugs on the ground floor. To be fair our hostel was an oasis upstairs, decorated in a very fancy manner.

We headed straight back out to get some Koshary, a typical Egyptian dish. We ate at the best rated one in Cairo and it was always heaving with customers. A smartly dressed waiter brought over two bowls filled with rice, macaroni, spaghetti, brown lentils and chickpeas. On the side was a silver pot of tomato sauce, lime, fried onions and more chickpeas. The waiter squeezed the lime into the tomato sauce and added a few dashes of vinegar and chilli, poured it over our pasta concoction and delicately sprinkled the onions and chickpeas on top. It was actually very tasty and great for vegetarians. A big serving with extra toppings cost less than $2. The waiter asked us how the service was on a couple of occasions which was annoying, and he even had the cheek to suggest the change we were getting back was his tip (it was the price of one meal!). 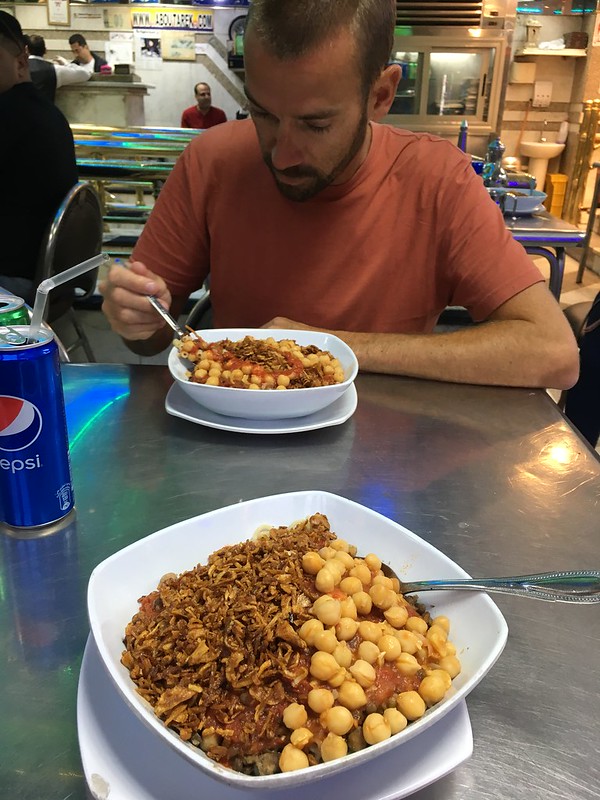 We visited the pyramids on our first day which I will write about in another post, and the following day we checked out the Egyptian Museum. I’m known to get rather bored in museums, depending on the subject and displays mind you, but this one kept us busy for four hours! It was filled with ancient Egyptian finds from pottery and jewellery to mummies and sarcophagusi. I enjoyed whispering funny remarks into Craig’s ear as we walked around the displays. One sculpture of a man had humongous legs which were completely out of proportion to the rest of his body “looks like he didn’t do enough exercise on his long haul flight…”. A couple of sculptures had clearly been found crumbled into pieces and put back together with half of them missing “when you let the trainee archaeologist fix your favourite sculpture”. And then we saw a tourist standing infront of a huge female statue, bending his head down to read the description and from our angle it looked like he was right between her legs and I was childishly elbowing Craig to take a look at the funny sight. 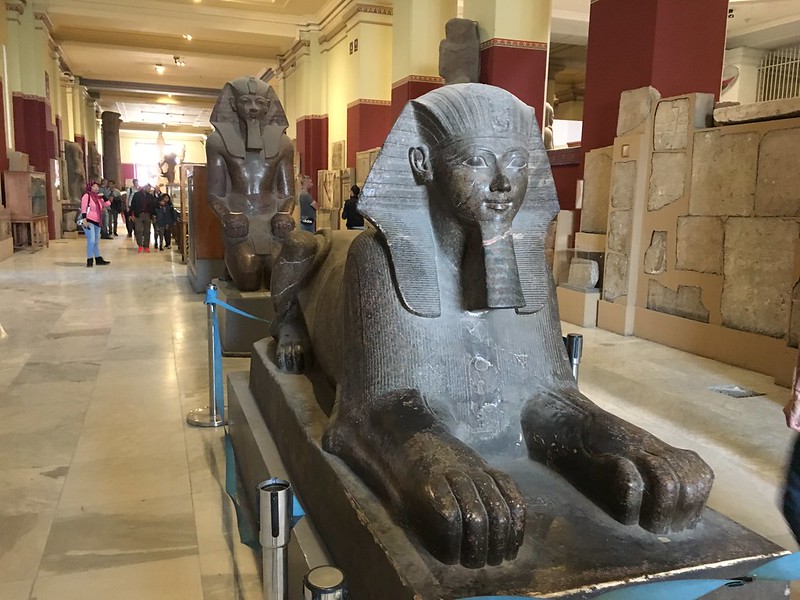 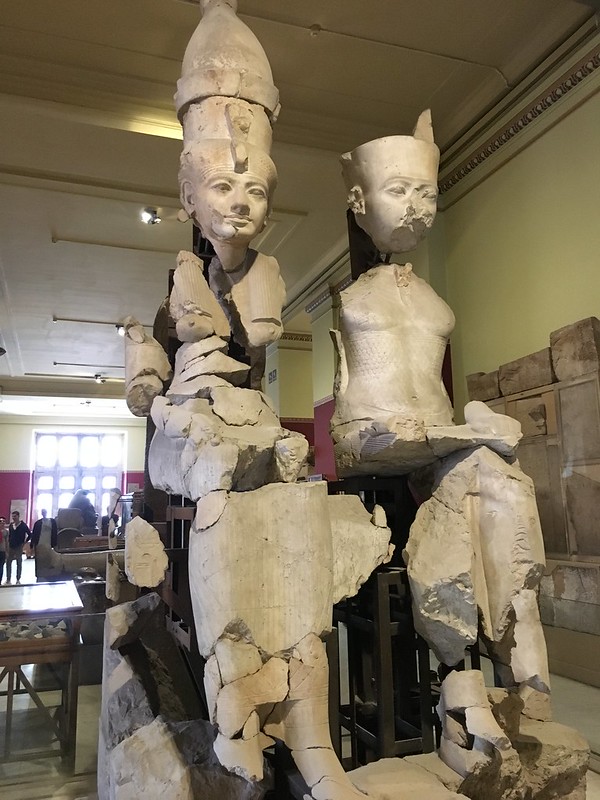 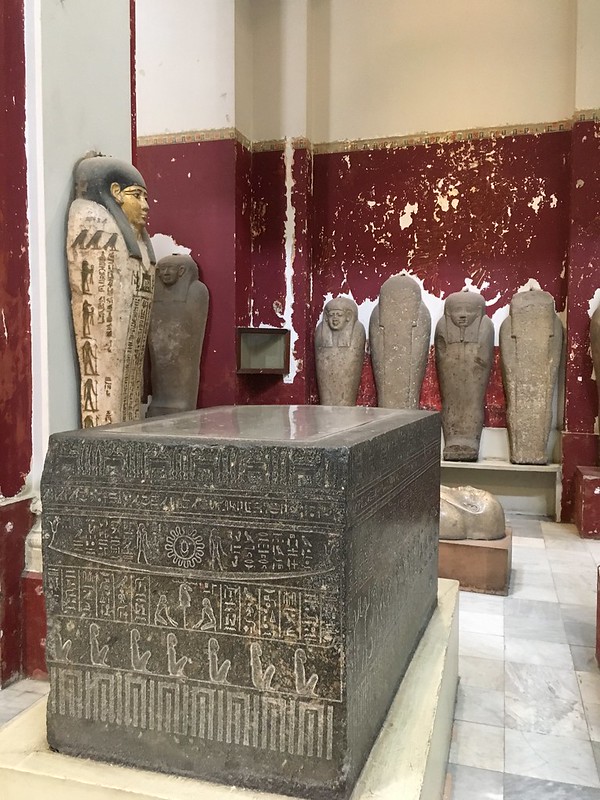 Upstairs was much more interesting as it was home to all of the mummies. It also had a fascinating display about Yuya and Thuya, a royal couple. I had no idea but the mummified body is the start of an elaborate Russian doll. It would be placed in a classic mummy shaped coffin, decorated with jewels and paint, and that would be put inside a second and third one. The Egyptians were the masters of mummification which basically just means preservation. They originally buried them in the sandy deserts, the hot, dry conditions allowed the body fluids to drain away and the skin was preserved by the natural conditions. But then they began experimenting with different methods and the mastered version consisted of removing all the internal organs, bar the kidneys (too hard to reach) and the heart (considered the source of intelligence). The organs which they removed were separately mummified and placed into tiny mummies to be put in the same tomb as the owner. The brain…well, that’s a rather gruesome procedure, they put a metal probe up the nose and whisked the brain to turn it into liquid so it would just pour out the nose!! Yuk!

We got to witness the two mummies of Yuya and Thuya, their skin looked like a bad piece of leather and their hair was a strange blonde colour. They still had eyelashes and nails and metal sandals on their feet. The Egyptians cared so much for the dead, especially the royals (also called pharaohs). Grand tombs would be made for them, some of the finest examples are the pyramids which were made to bury a king in each. Inside they would cover the walls of the tomb and or sarcophagus with carvings that told a story. There were wish lists carved onto the walls with everything the royal needed in their afterlife. They would even have furniture put in the tomb, a boat so they could travel and they would have their metal sandals left on their bodies so they were free to walk wherever they pleased. 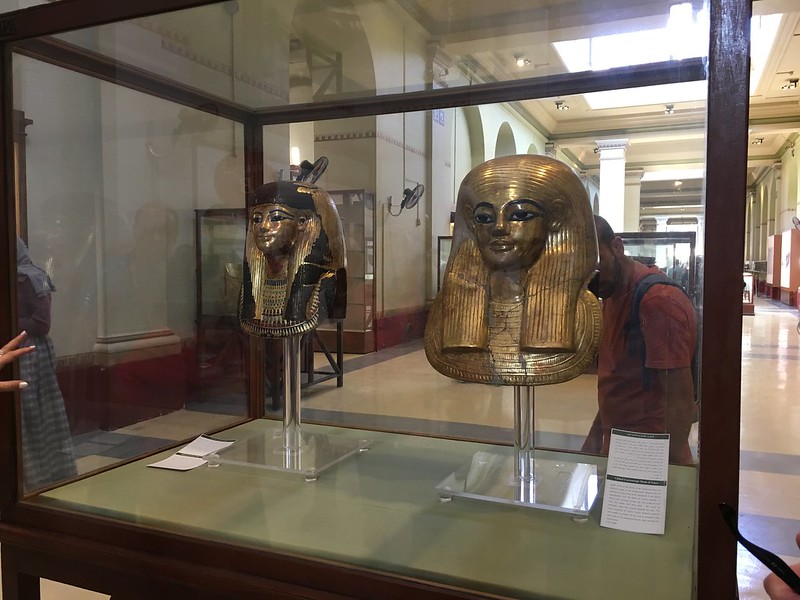 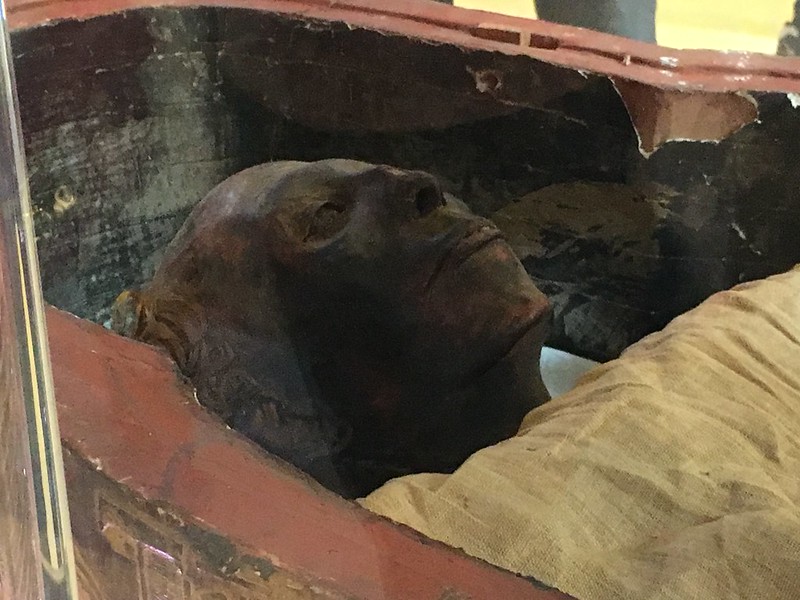 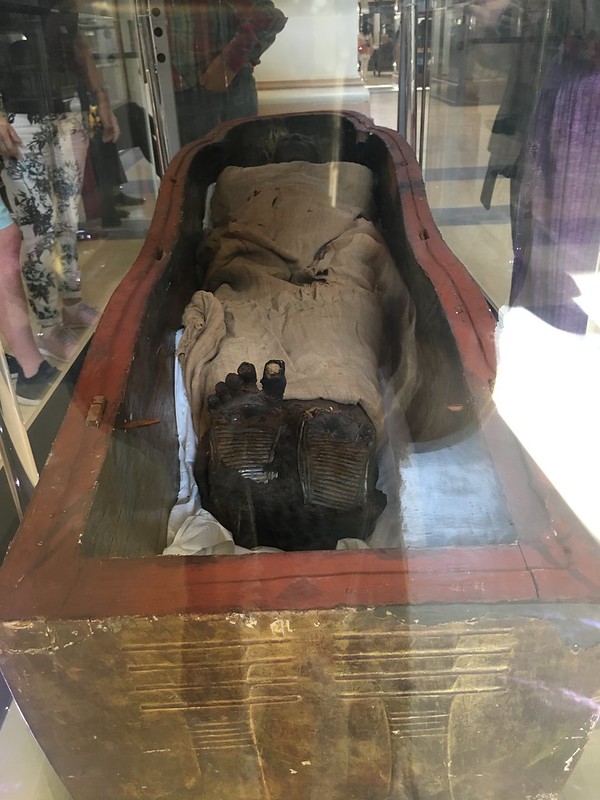 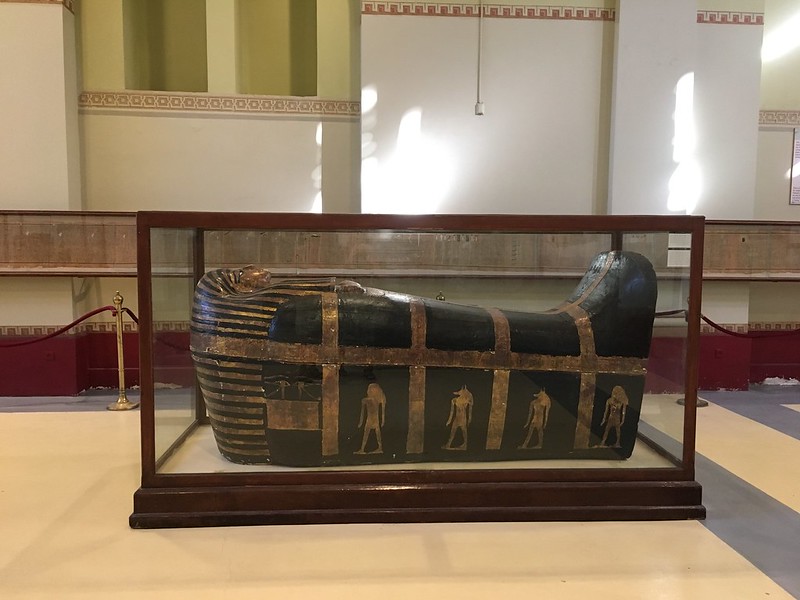 One thing I found really fascinating was they even had food with them in the tombs. They actually mummified the food so they could feast on it for eternity. Beef ribs, steak, butchered ducks, geese and pigeons were dried with a mix of salt and baking soda. They also used spices and oils to deodorise the meat and keep insects away. The meat was then placed in individual coffins that were shaped like the food that was inside. So there were these Christmas chicken shaped boxes which I found really funny. 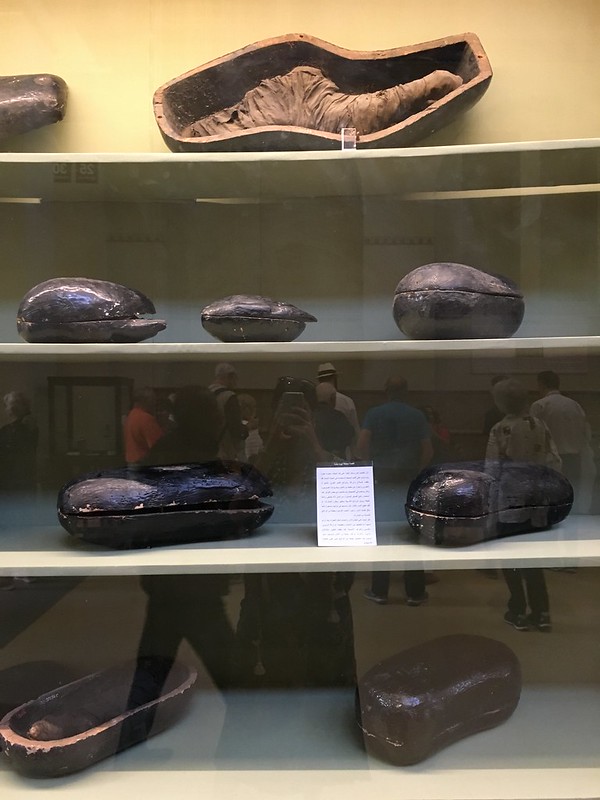 Many of these finds were from the Valley of Kings further south in Luxor. The pyramids began to get raided by tomb thief’s so the Egyptians realised they needed to move the royals to a secret place to protect them and their treasures. The pyramids were basically a big beacon in the desert saying ‘rob me’ so they decided to change their tact and bury underground tombs instead. Eventually they too were discovered and robbed, all bar one – Tutankhamun’s tomb.

Tutankhamun was born into incest and suffered from scoliosis. He was a very young king and died at just 18 years old. He died so young that people think they didn’t have his tomb ready so they put him in a much smaller tomb designed for a non-royal and it was ignored or not discovered by the thieves. Therefore it was the only one to be found which was left totally intact with all of his possessions remaining. There was a special exhibition room displaying all the finds including the famous death mask. It was hand beaten from a sheet of gold and inlaid with coloured glass and semi-precious stones – it weighed a whopping 10kg!! Photos weren’t allowed in this particular exhibit but so many people were taking sneaky ones on their iPhones and there was one very angry guard trying to enforce the rule. He was screaming across the room “NO PICTURES, NO PHOTOS!!” and if he caught someone he’d grab their phone and delete all the photos! The coffins were gold and glitzy, covered in jewels and outside the room were three massive boxes covered with gold, they all fitted inside one another, the biggest of which was a standard size of a British bedroom, and then inside all these boxes would be all of his coffins and his mummified body. There was even a large gold box with statues built around the side to guard it, inside were his mummified organs. 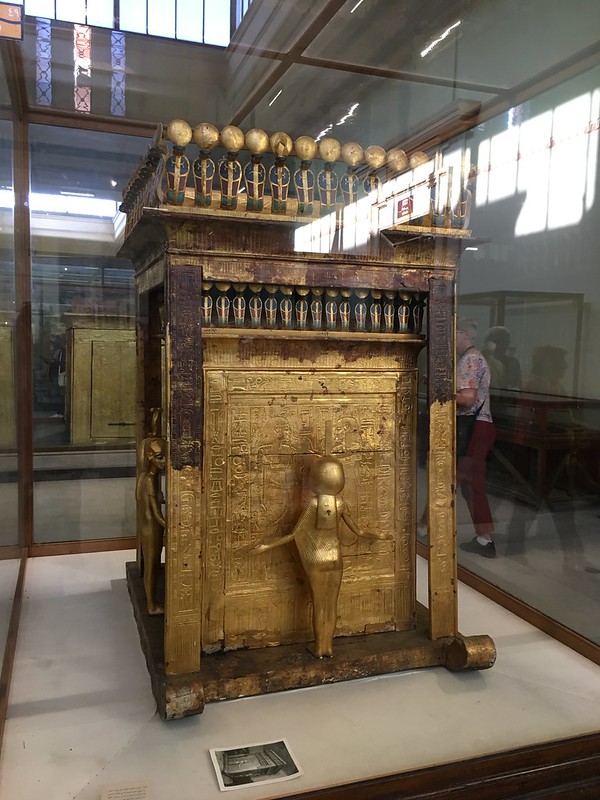 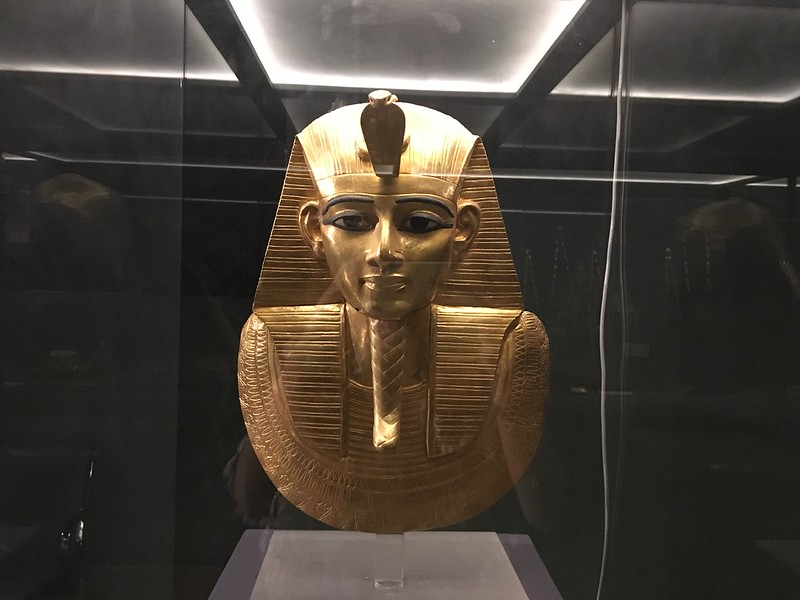 We saw different styles of mummies. During some eras they painted portraits of the person on the outside of the mummy. There was even a tiny black child only a few feet long laying on a cushioned base. It was the only one that wasn’t covered by a sheet. It’s head was massive and that’s something we saw in many of the sculptures and paintings of the Egyptians, either they wore really strange headpieces or they had huge bulges at the back of their heads, just like aliens. Apparently some people say there’s some relation between the Egyptians and aliens, it’s so hard to explain how they lifted all the huge stones without any help from machines so aliens seems like a pretty fair assumption. 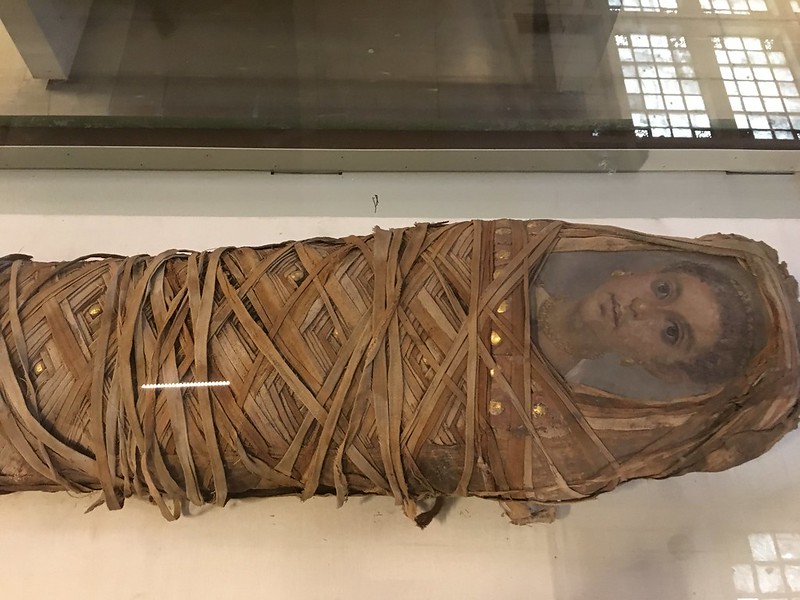 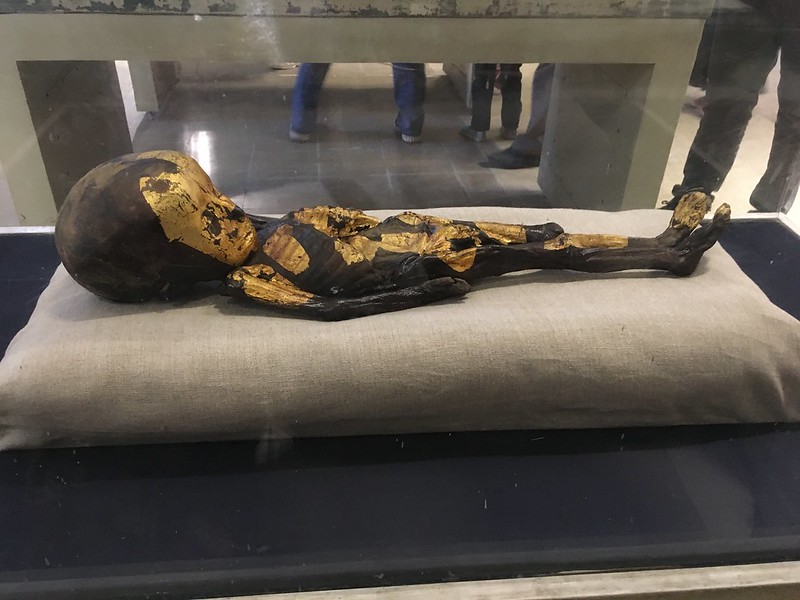 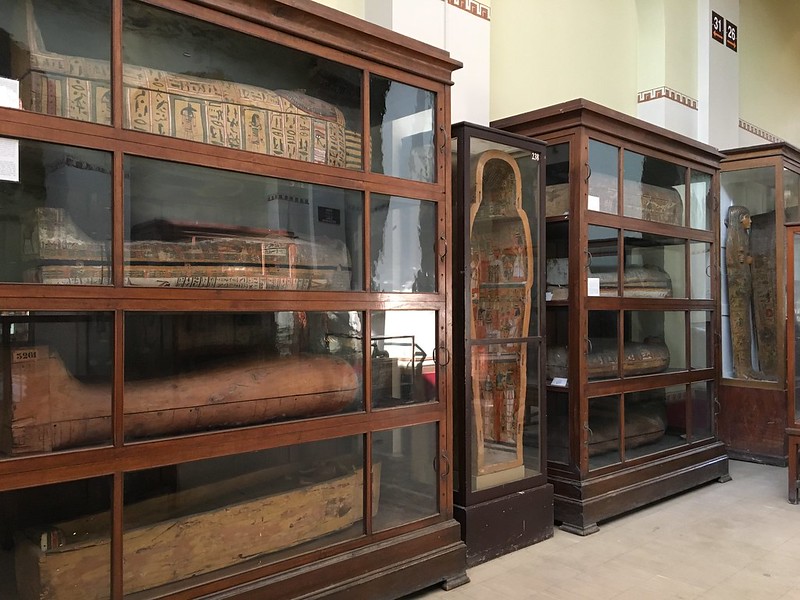 There was a lot to take in at the museum and very little information to explain anything. Sometimes we overheard guides speaking and the rest of the info I’ve read from my guide book. The final room we visited housed mummified animals. Egyptians had a strong connections with animals whether it was their pet, for food or sometimes because a certain animal was considered sacred. Pets were mummified and kept in the tomb of their owner. We saw huge mummified crocodiles along with tiny babies which were the size of little lizards. They would be individually mummified and placed inside the crocs mouth as that’s where they’re put for safety when swimming in the wild. There was even a huge fish over a meter long and half a meter tall, apparently most Egyptians ate fish from the rivers and sea but in one area along the Nile the local people considered them sacred so they flourished and grew into beasts. 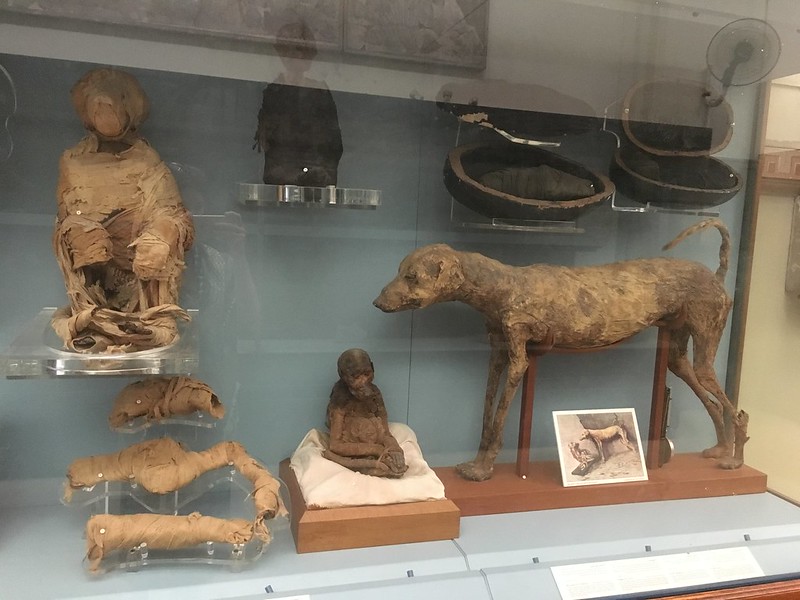 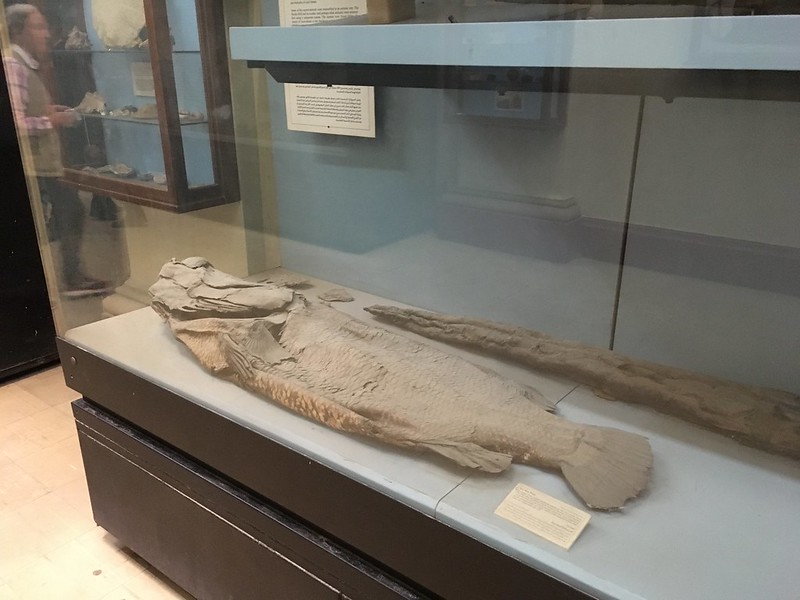 We were exhausted after being on our feet for 4 hours and trying to take in so much information, but we had a surprisingly good day and the museum was tout-free which was a plus!