We based ourselves in Fethiye to explore the surrounding area as there was a lot to see and do. The main area we wanted to visit was Ölüdeniz’s blue lagoon which I found out we could actually hike to via the ghost town of Kayaköy. We began by walking up some steep roads behind Fethiye town and suddenly it felt like we were in rural Turkey. The scene changed so quickly and old ladies with long skirts and bandanas were plucking vegetables from their rustic gardens while chickens and cockerels rustled in the autumn leaves. After a couple of kilometres we reached the road leading to Kayaköy where we planned to hitchhike from and it was easier than expected as the first car pulled over. Kayaköy was inhabited by Greeks up until the 1920s when an exchange was agreed after the Turkish War Of Independence that Greek Muslims would come to Turkey and Ottoman Christians move to Greece. So suddenly this village of 4000 stone homes was left abandoned, taken over by shrubs and crumbled by earthquakes. 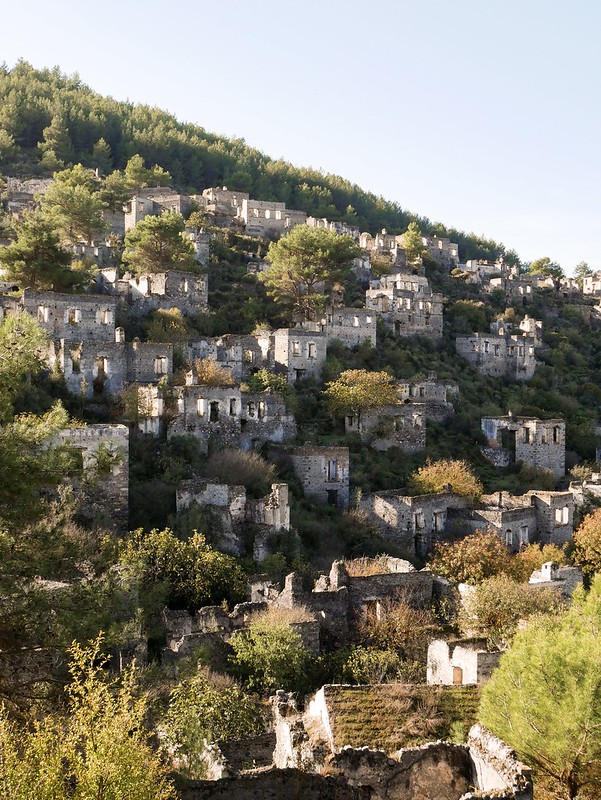 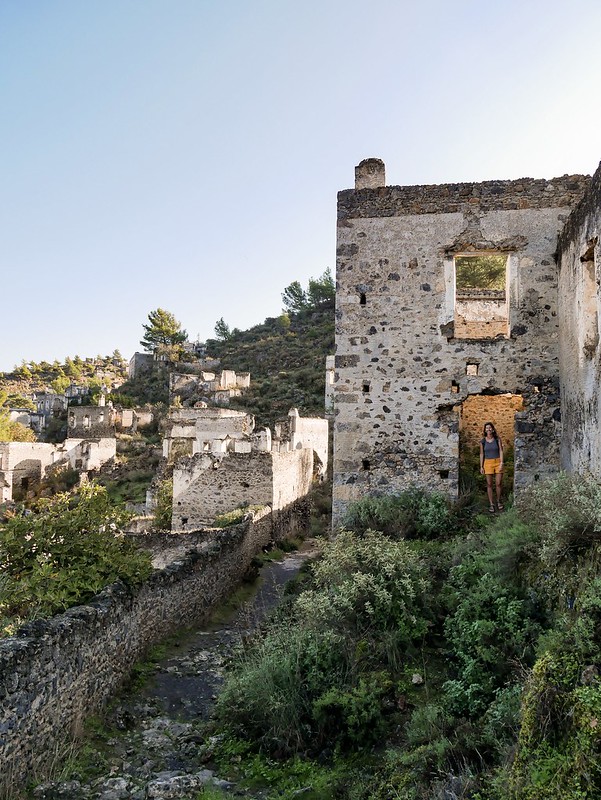 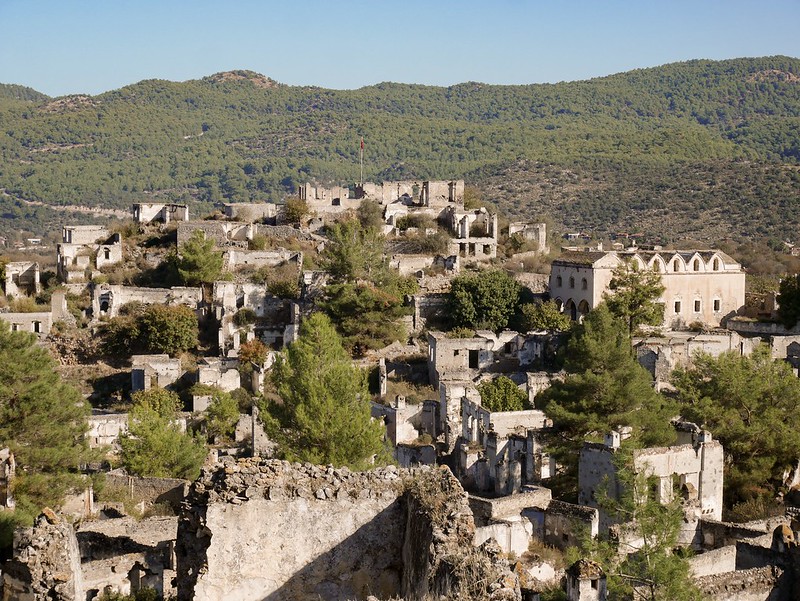 We headed up some steep trails and were amongst all the stone ruins where fireplaces were the only features remaining. The houses climbed up the verdant hillsides and narrow lanes led through the ghostly neighbourhood. It was an interesting place to walk around, but a shame there wasn’t more to the buildings, not a single piece of furniture was left behind. 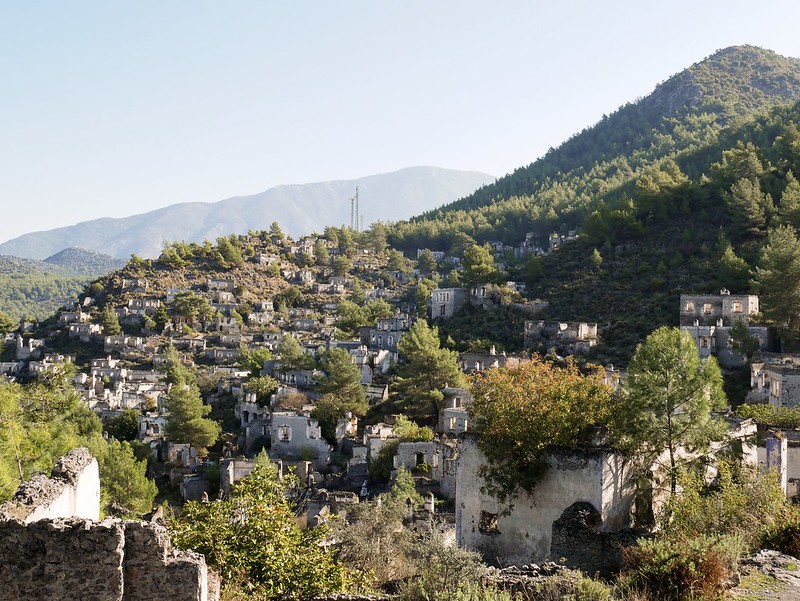 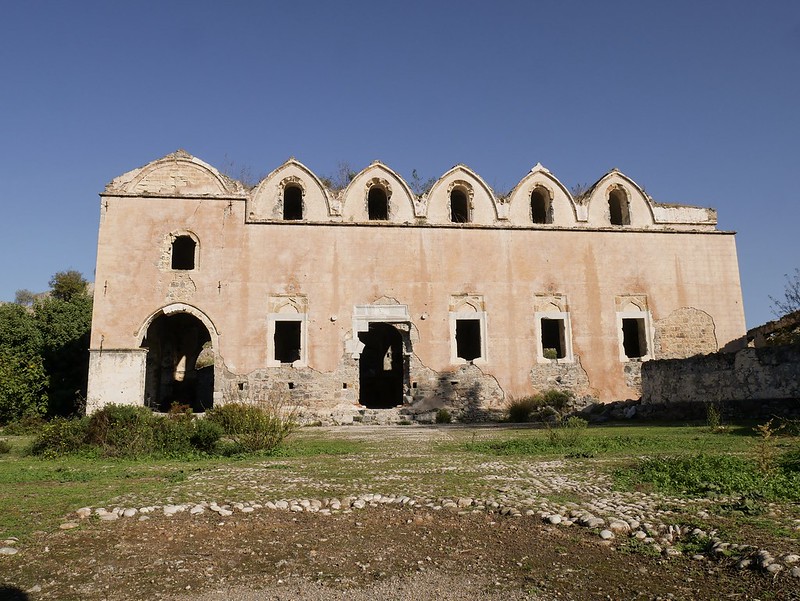 Once we got our fix of history we continued on a trail through the woods. It wasn’t the easiest route to follow and we were the only people hiking the route. We were treated to views of beautiful azul bays with tiny private beaches that we considered hiking down to and scraping our plans of visiting Ölüdeniz beach, but we persevered. At one point we realised we’d walked past a viewpoint so we followed a faint trail and then I had the most excruciating pain hit me in my ear and I fell to the ground. I looked up and there was a snapped branch poking out a tree at head height, with a tip as sharp as a blade. It had stabbed me right in my ear and cut into my cartilage. Thankfully it didn’t go near my eardrum but when I asked Craig to take a photo as I wanted to see if it was bleeding I saw blood dripping down my ear. It was quite a nasty stab but other than the pain and blood I was fine to continue on the hike down to the beach. Our legs were pretty scratched up from the bushy trail and when I complained about my ear throbbing Craig actually had the cheek to point to a minuscule scratch on his leg and say “yeah we’ve both been in the wars today”. Obviously I didn’t think his scratch was remotely comparable to a ear dripping with blood and I made sure he knew it! 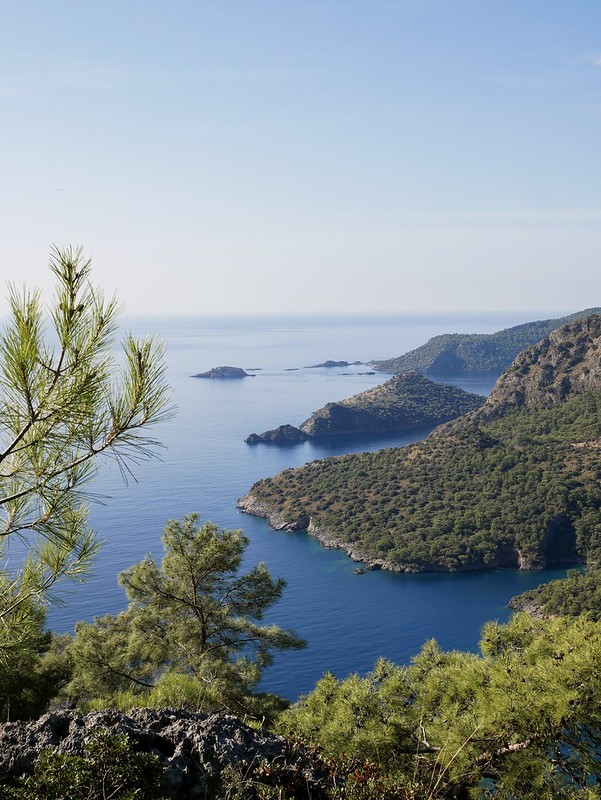 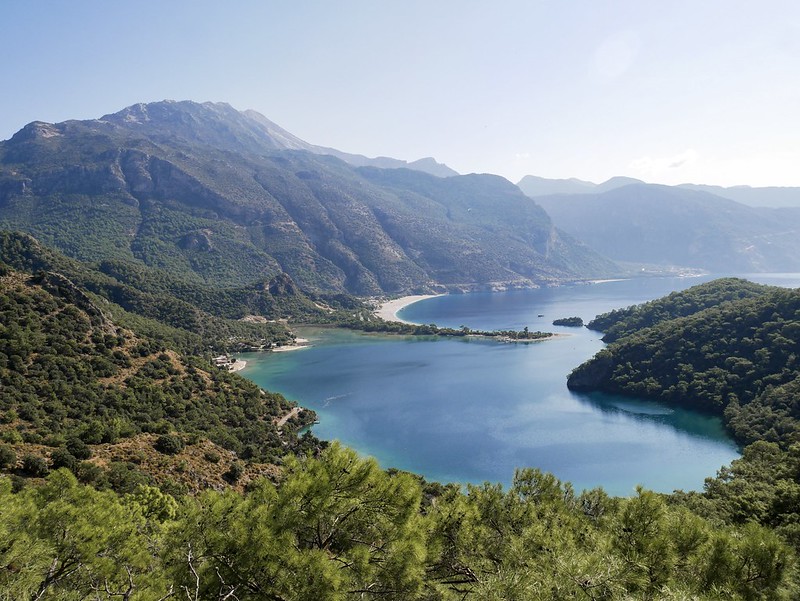 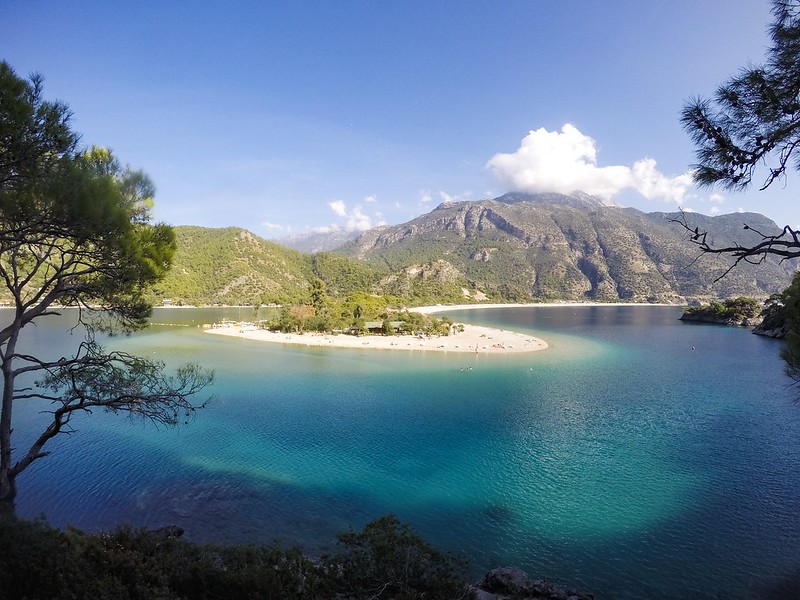 Finally after a couple of hours we were walking on the gravelly shores towards the end of the sandbar which is protected as a national park. We managed to pick a nice area to sunbath (away from the many cigarette butts on the ground) and there were only about twenty other people on the beach – in the summer there’s not even space to lay a hanky to sit on as it’s crammed with sun beds. But there was no denying the beauty of the place, the water was crystal clear and turned from turquoise to deep blue. It was a great reward to swim in the cool water after our hike. The main beach in Ölüdeniz wasn’t as pretty as the lagoon but it was a great spot to watch paraglider’s landing. 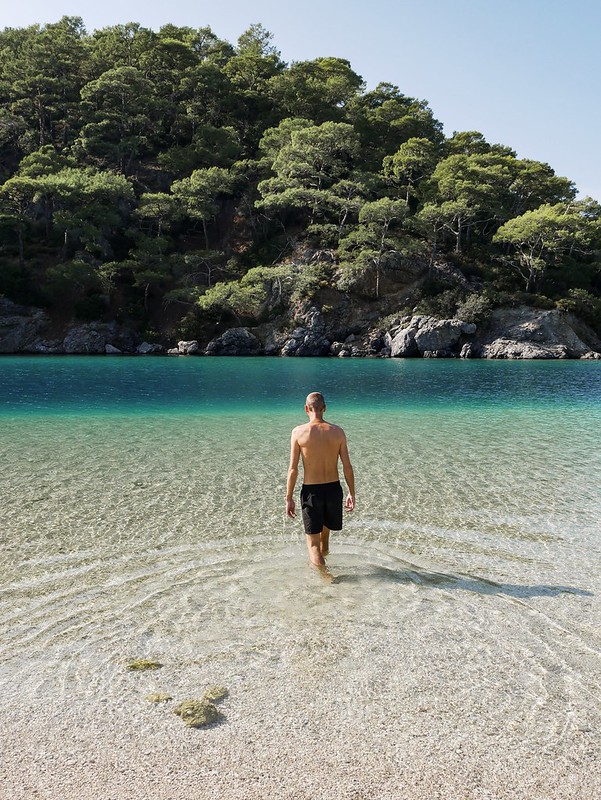 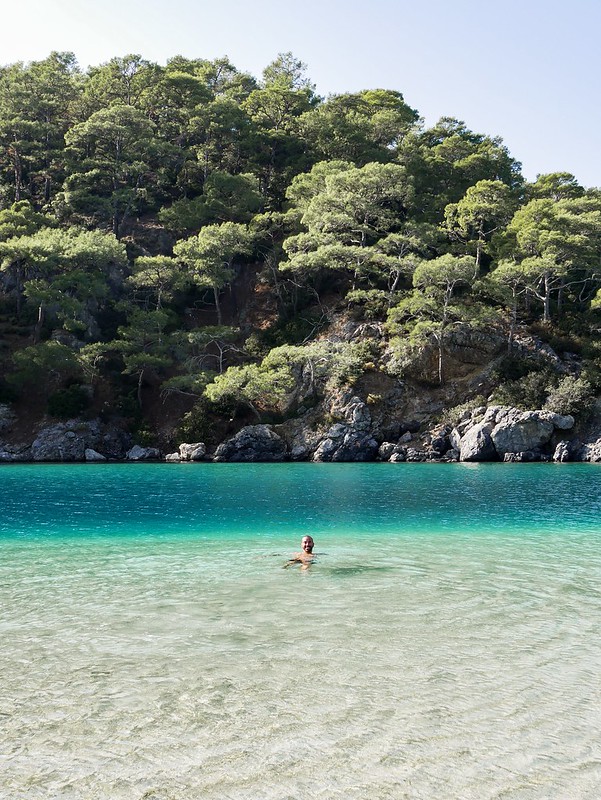 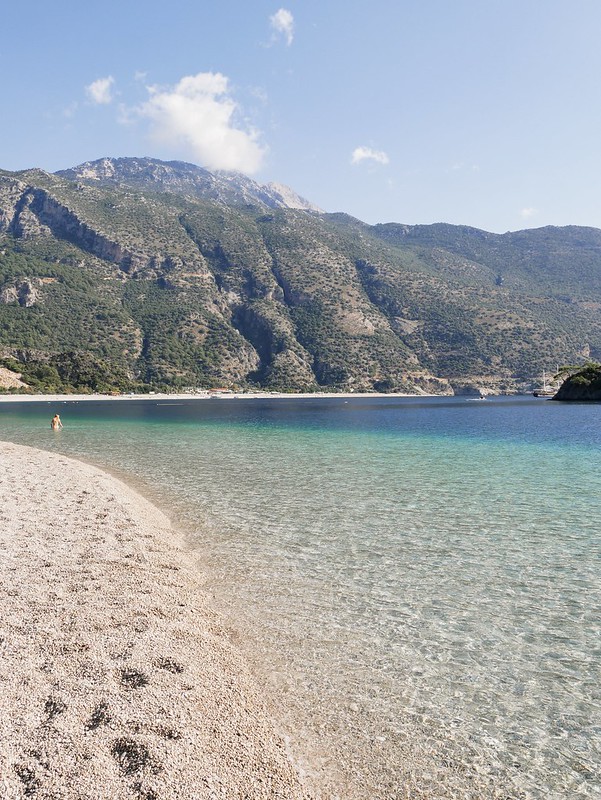 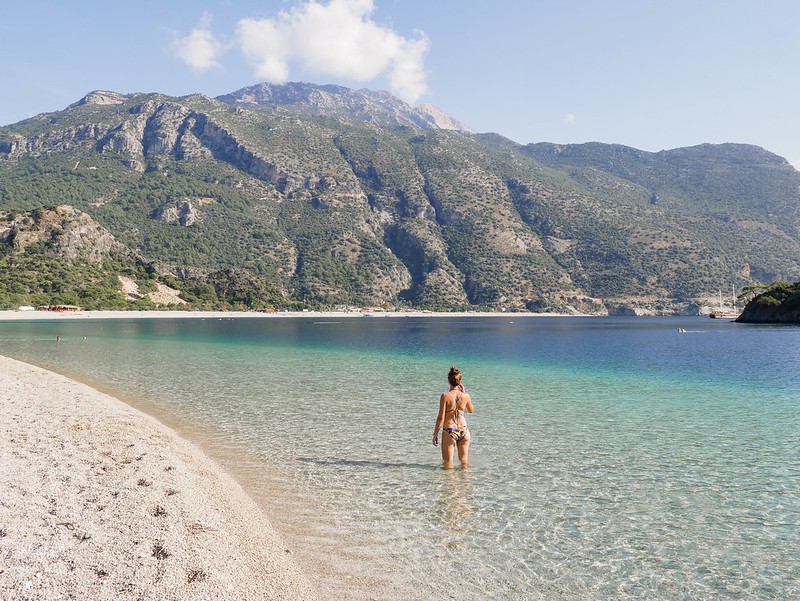 Ölüdeniz town was split into two areas, one was next to the beach and filled with holiday villas while the main town was a few kilometres up the road and it was one of the tackiest places we’ve ever seen. Because it was built for tourism, almost everything was closed for the season and the shop and restaurant signs had us cringing as we drove past. You’ll appreciate the names more if your British (because this town tried to be a mini (but very tacky) version of Britain) – there was the Chuckle Brothers Cafe, Del Boys Restaurant, Mark and Spenger and other classy shops like ‘Genuine fake sunglasses and watches’. I literally couldn’t pick a worse destination to go on holiday to. 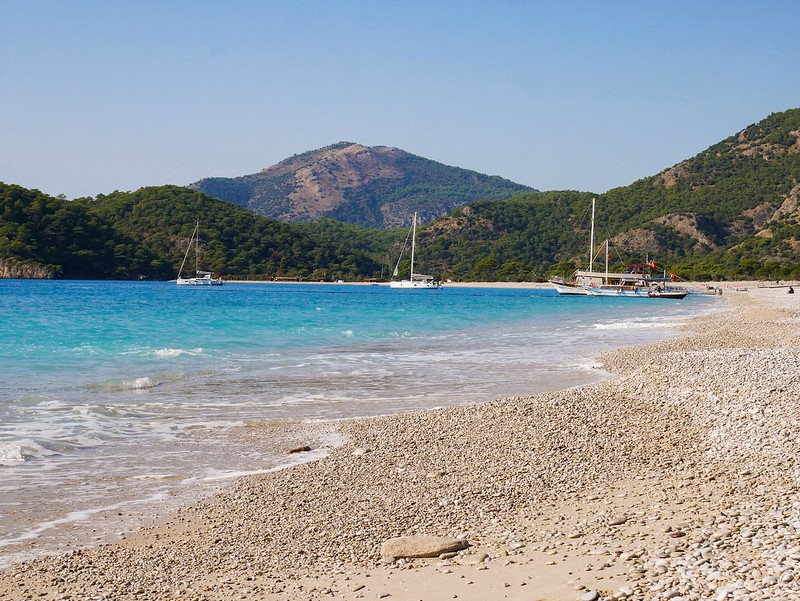 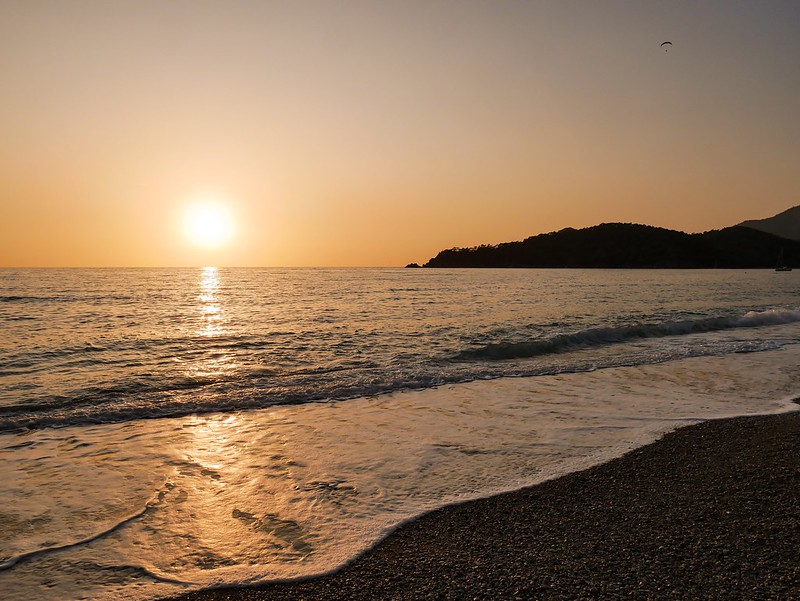 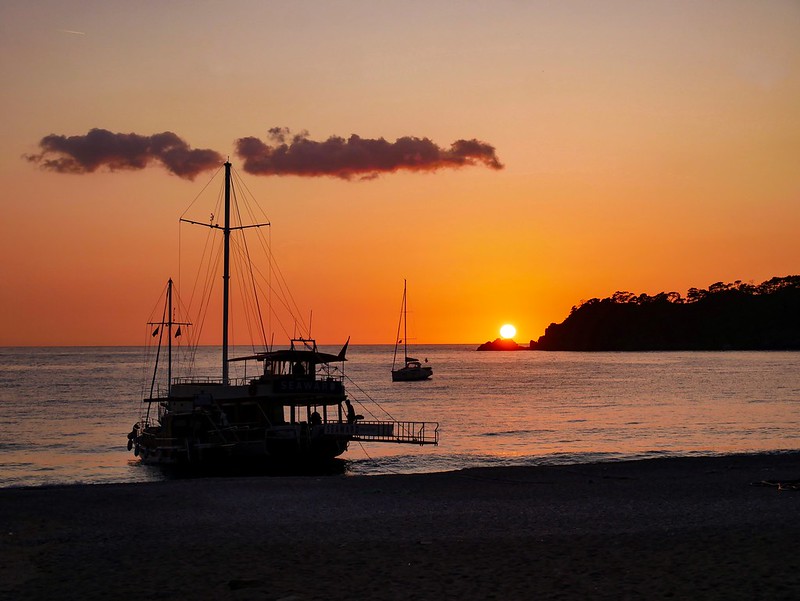 For another day trip we caught a dolmus van to Saklıkent Gorge. Once again we were lucky to be visiting in the off season as we had the place to ourselves compared to hour long queues in summer. The gorge is 18km long and up to 200m tall, sometimes it narrows so much that the sun can’t pierce through. The main reason we wanted to visit was the fact that we could do some mild canyoneering without a guide so it was a very cheap activity for us. The first section was a raised boardwalk clinging onto the side of the canyon but it eventually opened up to an area with a tea shop and a waterfall with clear water flowing down into the murky stream filling the gorge. 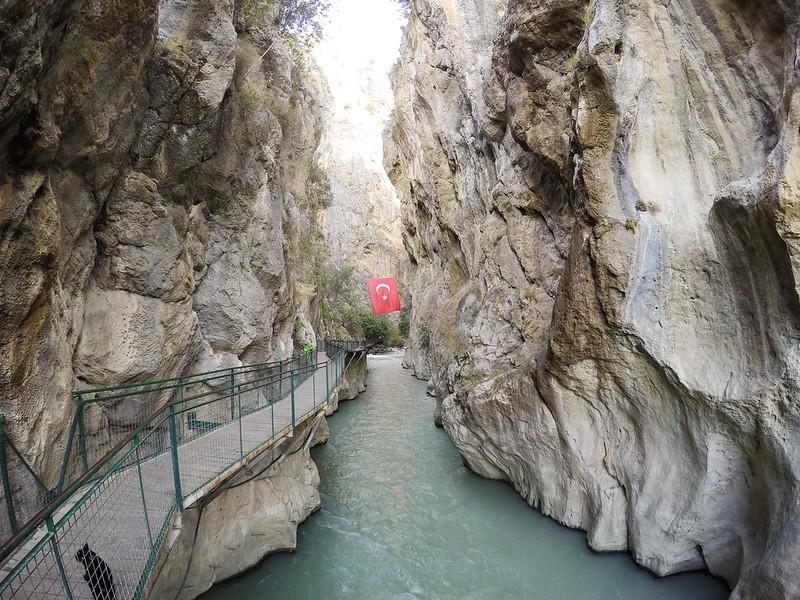 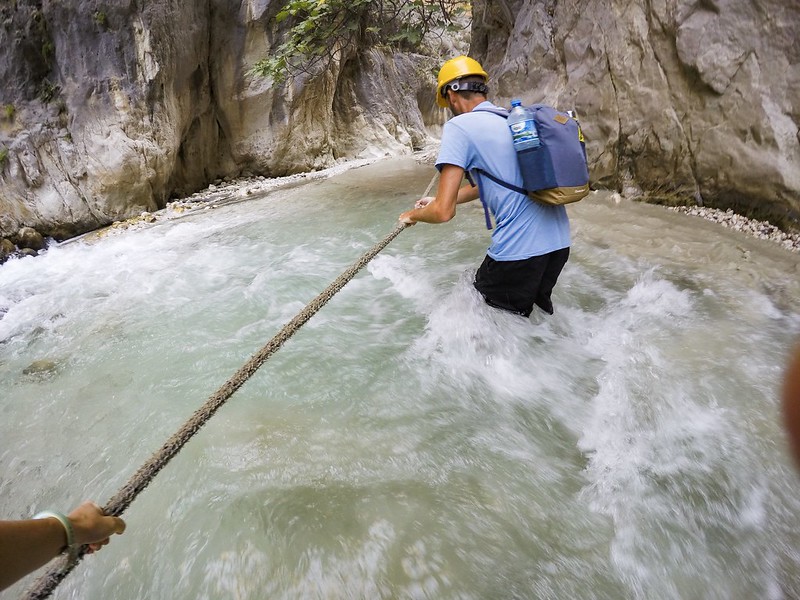 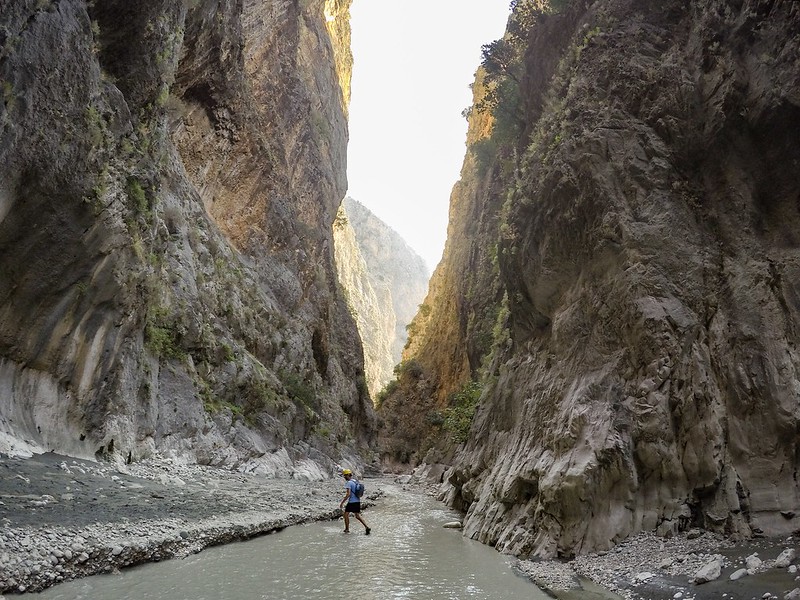 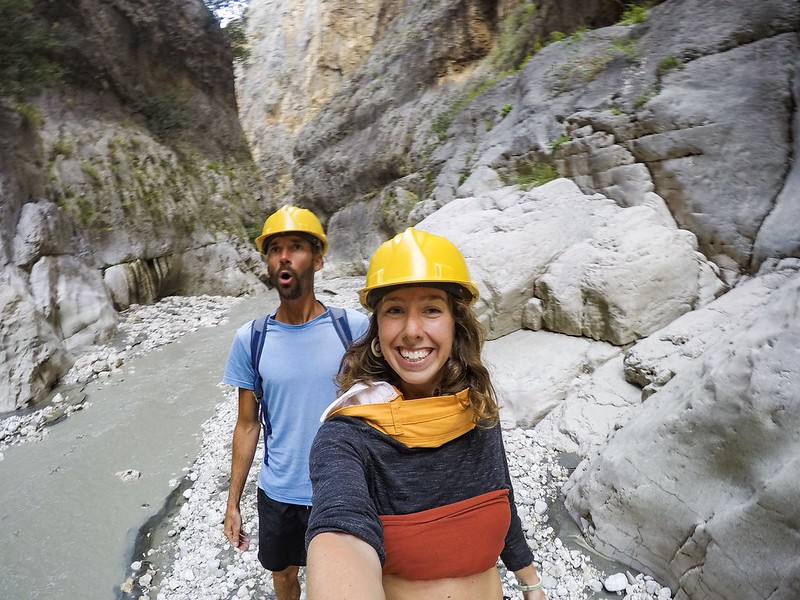 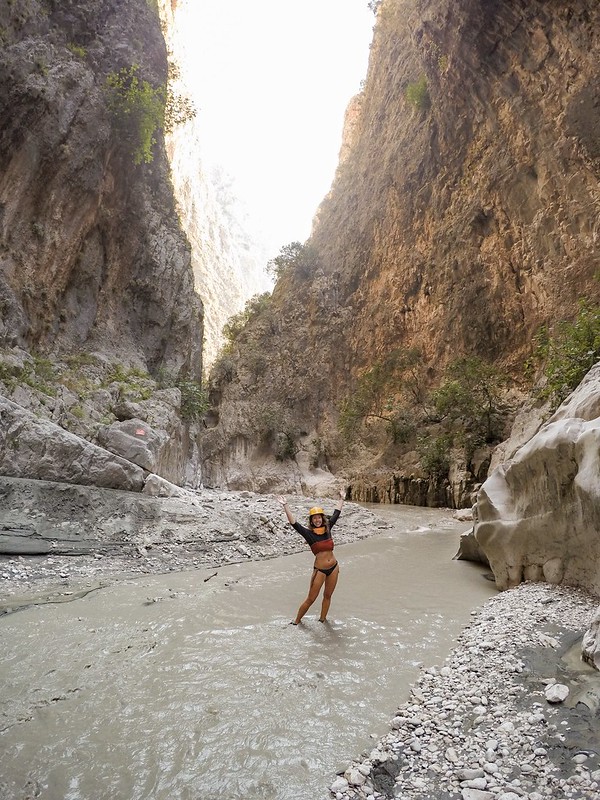 There was a basket filled with free builders style hats so we grabbed one for protection from falling rocks and made our way down the slope towards the river. The water was pretty damn cold and it was deepening with every step so I quickly took my shorts off and wrapped them around my neck. We made it to a rope that cut across the gorge and we needed to hold onto it to pull ourselves through the incredibly strong current. The clear water was behind us now and we had to wade through a murky grey mess. We couldn’t see where to put our feet or how deep the water would be on each step. The gorge was really impressive though, with beautiful curves and the sun hitting the high walls with a golden light. There were sections where boulders had been wedged in place during flash floods. The final section was the toughest, with rocks to climb over and water almost touching my waist. We traversed over a sort of rapid in the stream towards a waterfall but then the ground turned to clay. My sandals were suctioning down into the clay on every step and it was hard to balance so we decided to call it a day. It was a fun little adventure though and on the way back I used some of the clay on my face as I’d read it was good for the skin – it didn’t make me feel soft at all! 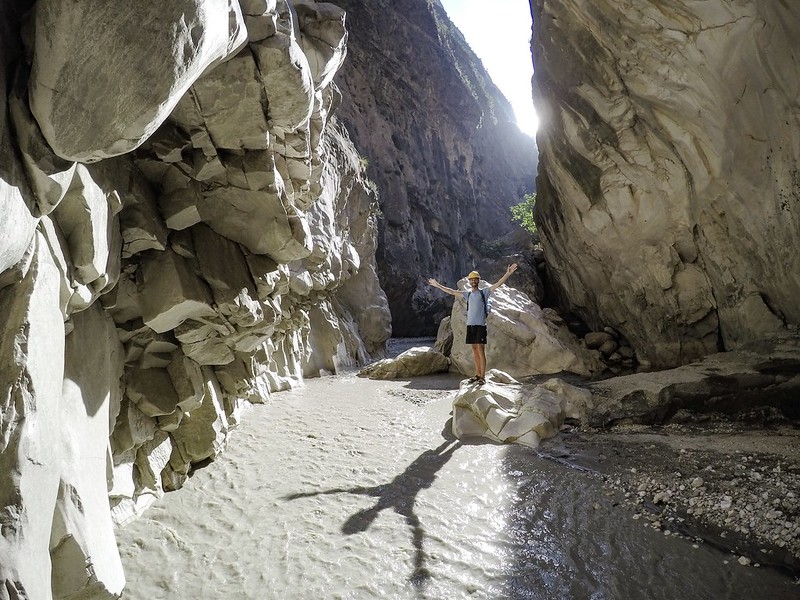 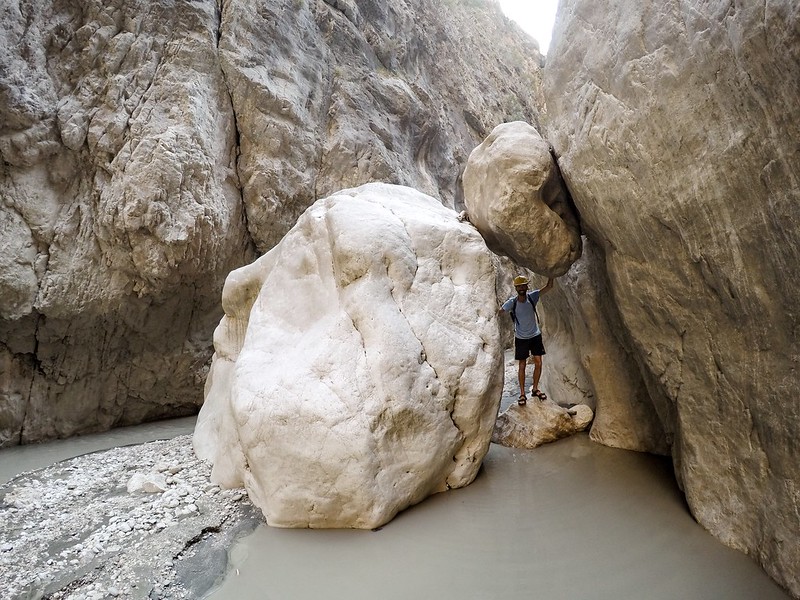 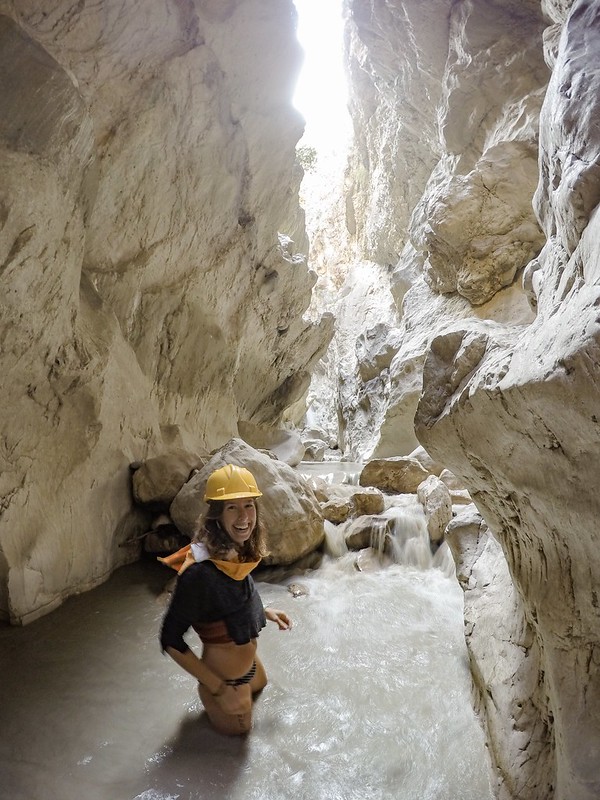 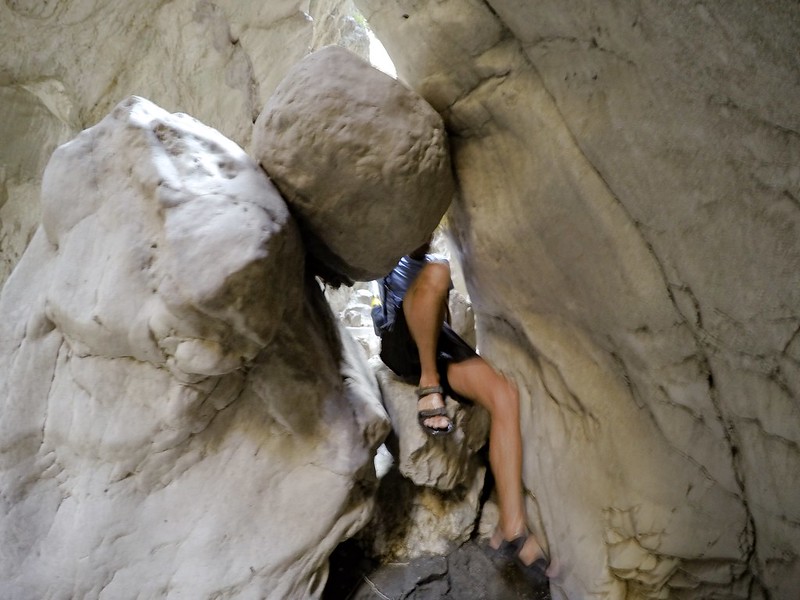 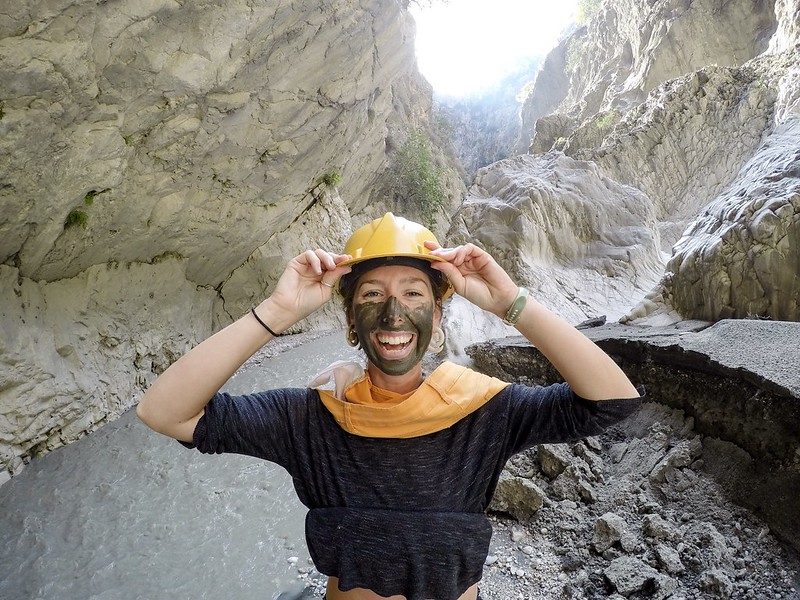 We tried out paragliding too while in Ölüdeniz which I’ll write about in a separate blog and we also discovered some ruins not far from our hotel. These tombs were carved into the stone walls just behind our hotel and they were almost as impressive as the ones we’d seen in Petra. It looked like they were carved from much harder rock as appose to Petra’s soft sandstone and there were lots of intricate pillars. Now it’s time for us to leave the town of Fethiye and head to a peaceful village of wooden huts with sea views and hiking galore… 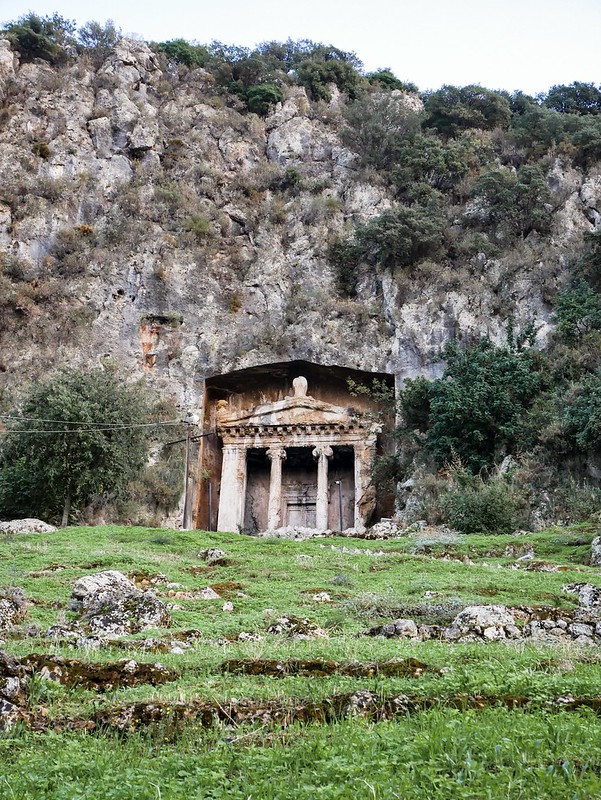 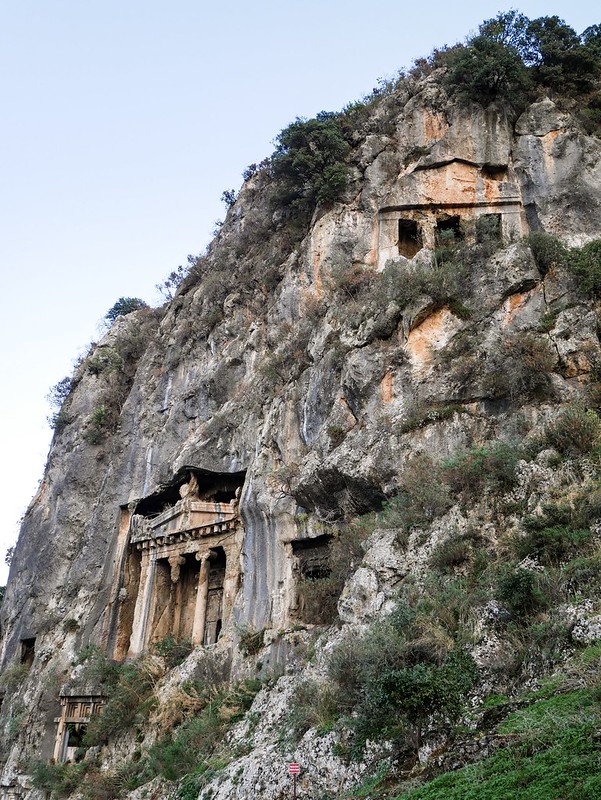 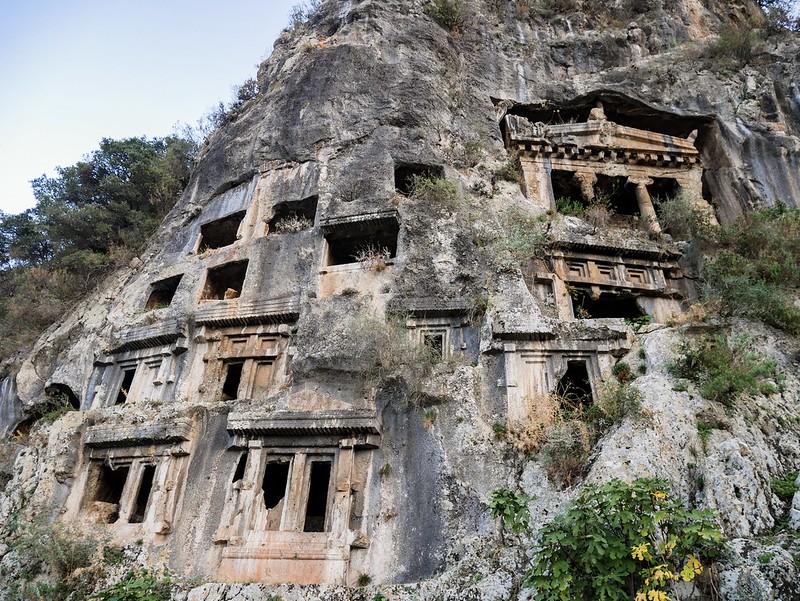