Sea lions are very wary of humans on land but underwater they become curious and playful like puppies. It was a dream of mine to snorkel with them and there’s not many places around the world where your allowed to do so but Puerto Madryn offered the trip (at a high cost mind you) so we jumped at the opportunity. The sea was due to be very cold as it was spring so we were suited up in a 7mm full body wetsuit and then a second short length one on top. Mine was so tight I could barely move and just bending down to put on my booties was an effort as I would ping straight back up like an elastic band.

We were the last people onboard the boat which we accessed by walking through squidgy seaweed on the shore and climbing up the steps – again, not at easy task in my tight suit with everyone watching and I had to heave my legs up with my arms! Finally we were on our way but apparently we took the worst seats and as the boat picked up momentum the waves sloshed onto my back. I laughed it off, I was going to get wet anyway, but when bucket after bucket of water practically got thrown straight into my face I gave up and sat in the little cabin.

One family had brought along their two tiny children, they must’ve been about 4 and 6 years old which seemed way too young for this trip. We were told the sea lions like to play-bite, just like puppies but looking at the rips and tears on the wetsuits I questioned how sharp their teeth were. Craig’s backside was severely shredded and a few puncture holes were across the thighs “just like puppies” we kept saying to ourselves.

There were two boats already positioned in the water by the sea lion colony but with tight groups of around 10 people it didn’t feel crowded. Finally it was time to enter the frigid water so we put our head pieces and gloves on and slipped into the sea. Holy moly was it cold. We couldn’t believe how cold it was actually, I really expected the wetsuit to keep us toasty. Because we were basically wearing 14mm of wetsuit fabric we were super buoyant and easily floated on the surface. The buoyancy made swimming forwards practically impossible though so we’d have to flip our bodies around and swim backwards.

The beginning part wasn’t very fun, it was cold and we had to wait in the water for the family to get their kids in. Craig gets cold really quickly and already he seemed to be suffering, I was cold but not unbearable so I tried to stay positive. Eventually we swam as a group towards the coast where the sea lions were making loud roaring noises. Suddenly the family realised it was a stupid idea to bring kids on the trip so the guide had to swim back to the boat with the youngest boy and I could see Craig was starting to lose his patience. But then I spotted a sea lion swim behind him and quickly stuck my head up “quick Craig look behind you!” I captured it on video and looked up at Craig afterwards “you saw it right?!”…he hadn’t. Oh dear. 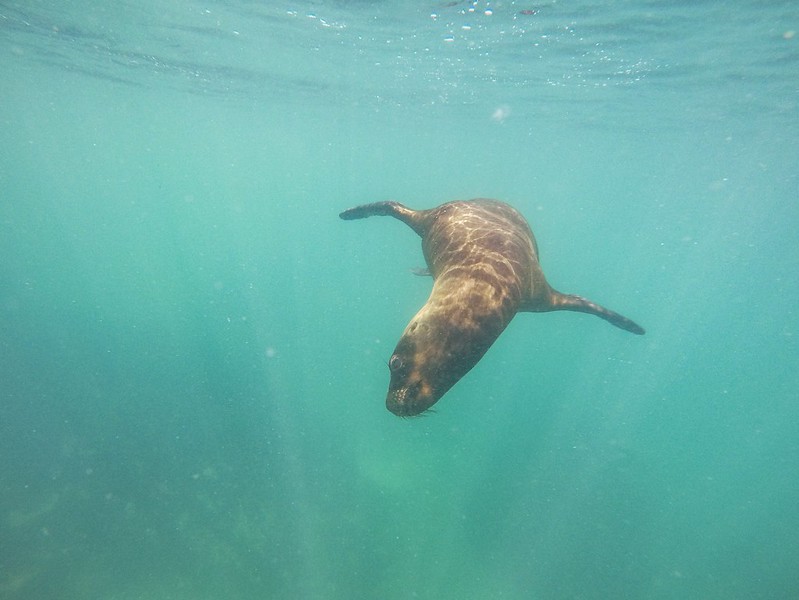 There’s no guarantee on wildlife trips, their wild animals after all and Craig knew how excited I was for the trip so kept telling me not to get my hopes up and to expect to not see any sea lions. But then I saw another one and made a noise for Craig to look. This one swam right up to me, spinning around like a ballerina on crack. Now my smile grew even bigger and I was sure Craig had seen this one, but he hadn’t. Without the adrenaline of witnessing them Craig was feeling the coldness of the water even more. What if those two sea lions were the only ones we’d see on the trip and he missed them both? I looked up at Craig and he was bobbing on the surface like a corpse with his hands raised out the water. It was a very funny image and I had to refrain from laughing as he was shivering so badly. 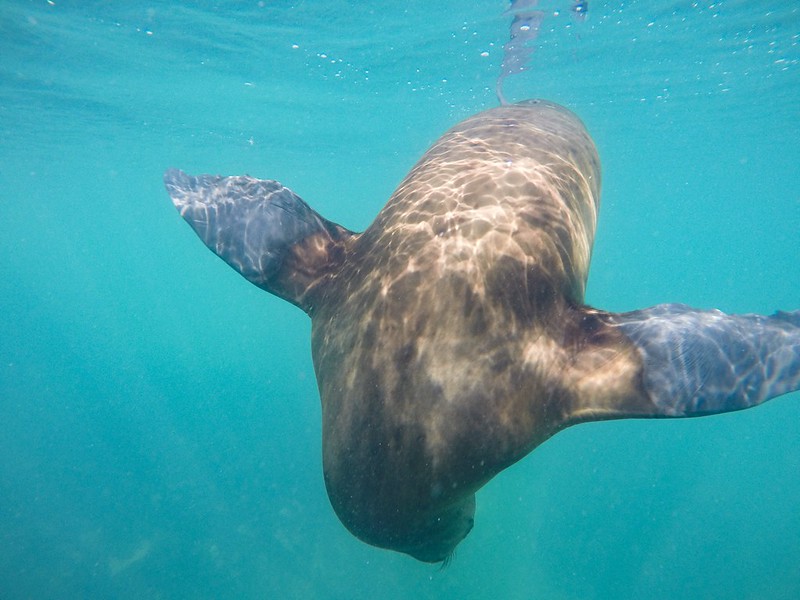 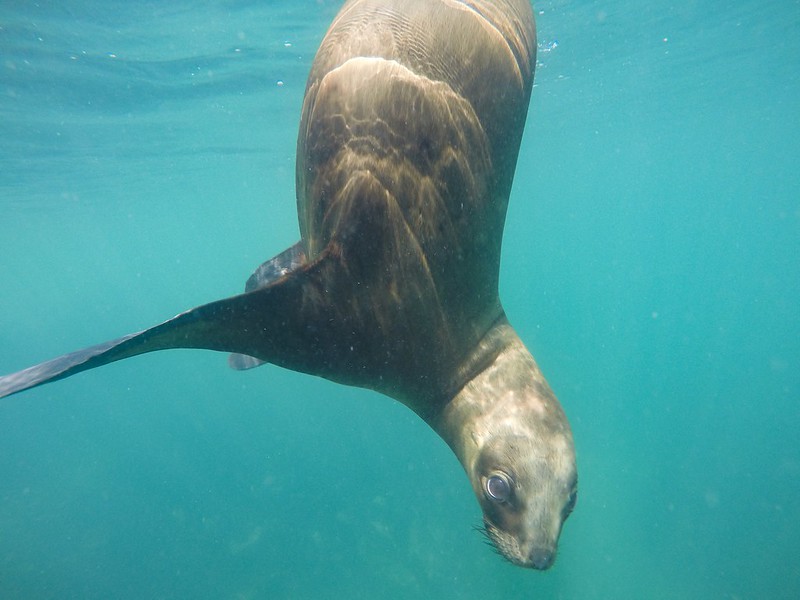 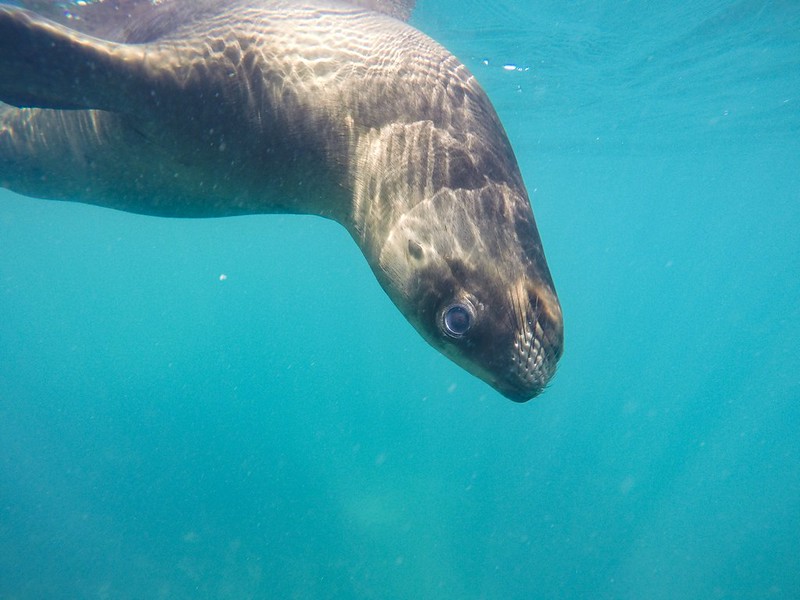 The guide directed us more to the left and finally we were in the midst of the sea lion colony. We had to stay a certain distance from the shoreline but for some reason they were all swimming in this spot and we were surrounded by them, wahoooo! They were all spinning around like synchronised swimmers. 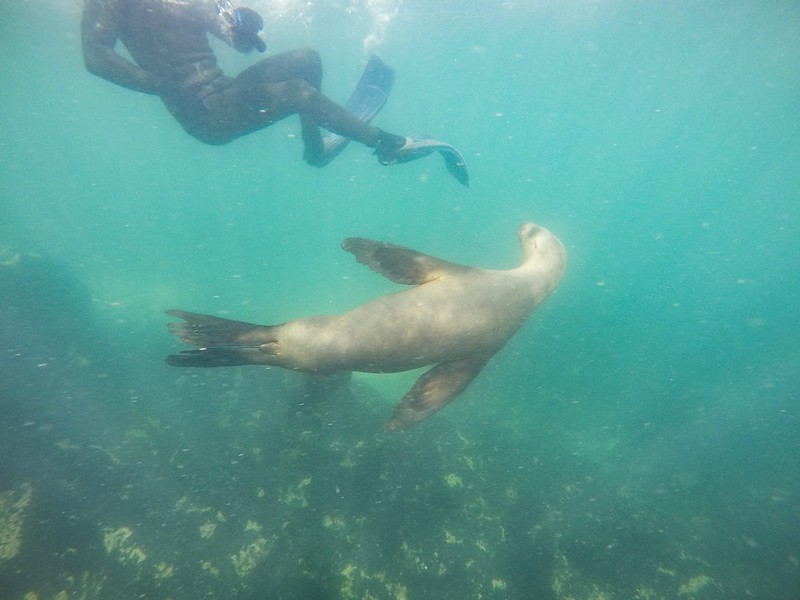 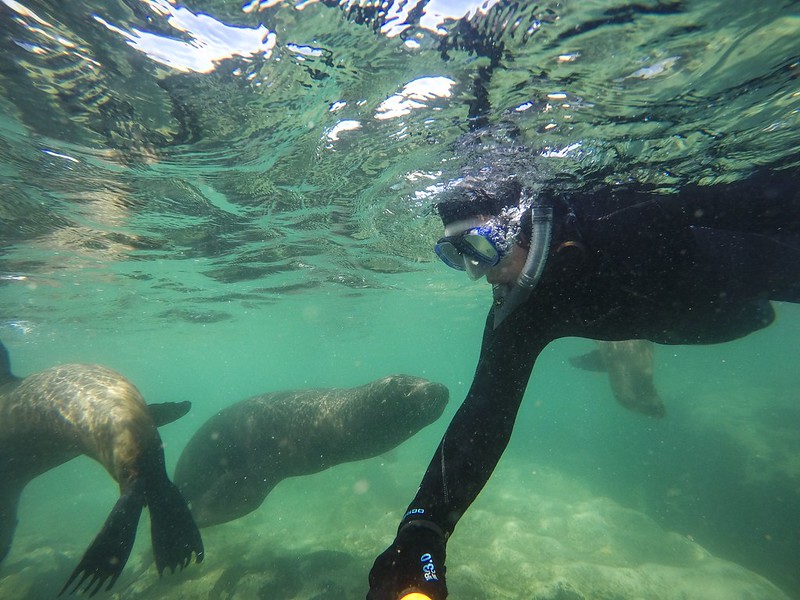 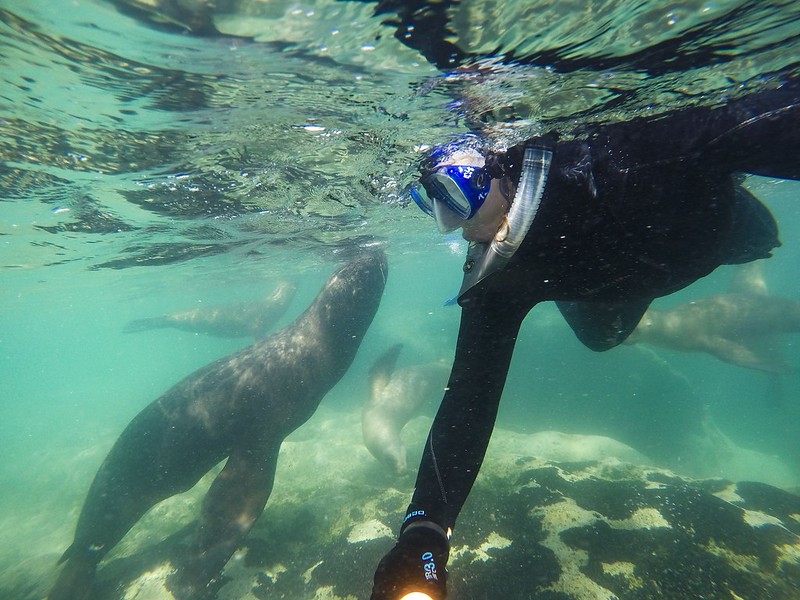 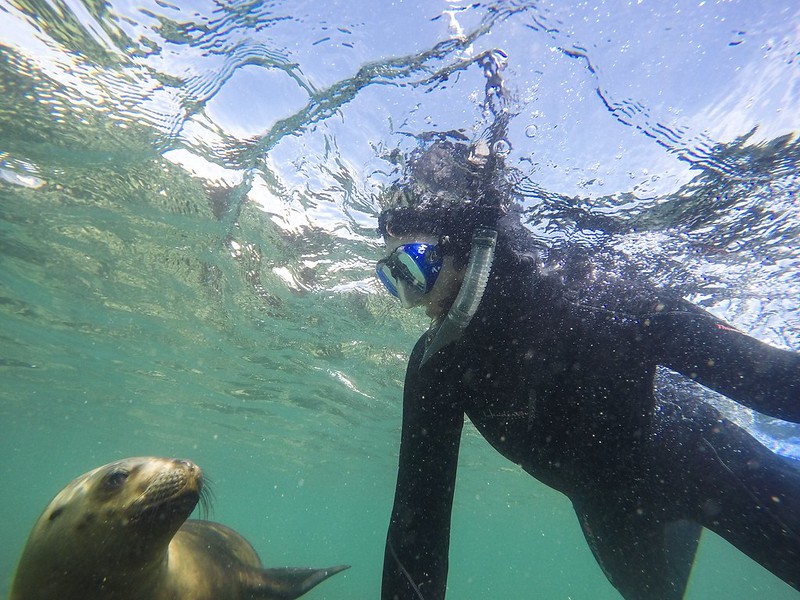 They had no concept of personal space and would swim right up to us, to within a couple inches of our face and they’d stare into our eyes. Some of them were extremely playful, especially the young ones who’d purposely bump into us and almost try and jump on-top of us. I was actually quite scared of them biting me and one caught me off guard, nipping my thigh. It didn’t hurt but it definitely surprised me. I kept leaving my arm out as a barrier to give them a nudge if they got too close but gradually I got braver and left it out while one opened its jaws wide. The guides were right, it was just play-biting, they just gently held my forearm in their jaws. 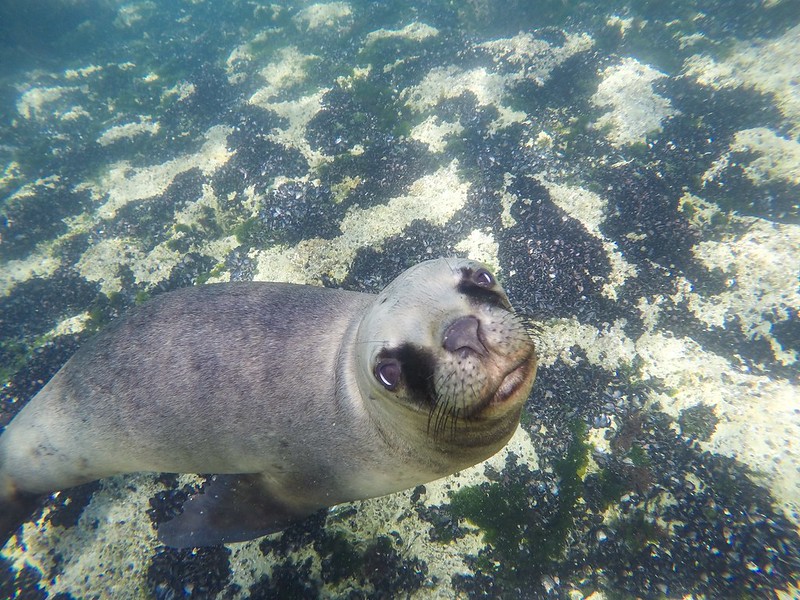 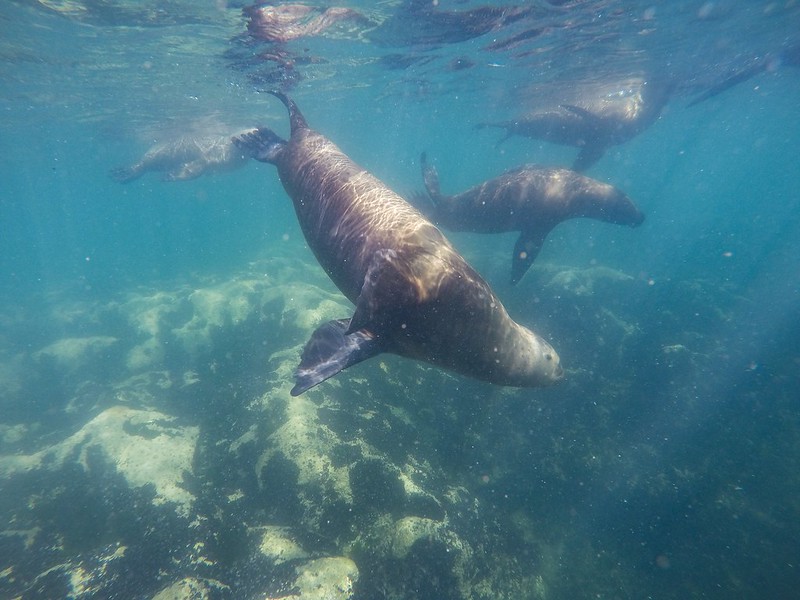 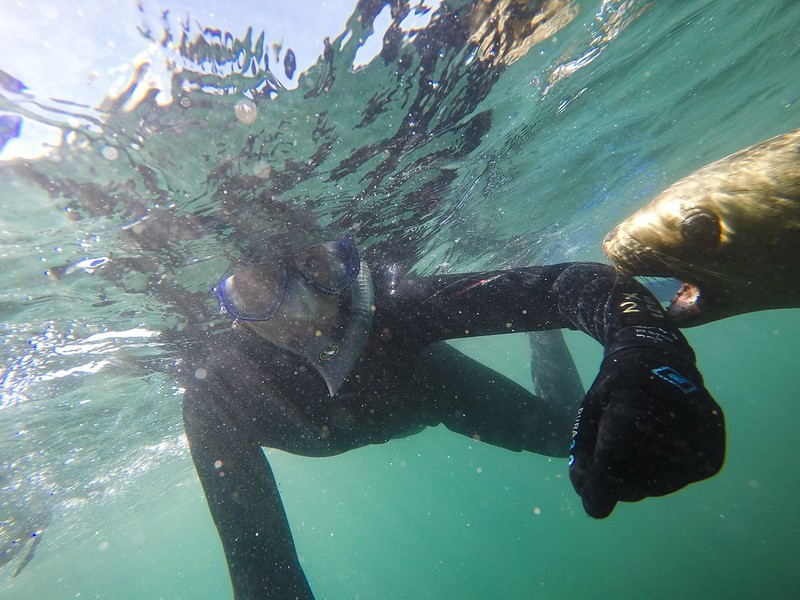 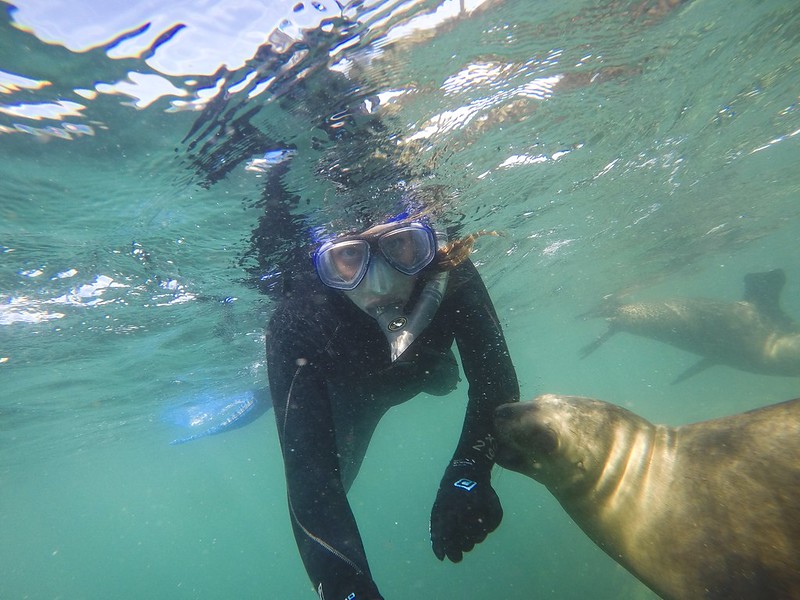 Some of them grabbed my hand with their flippers, just as I’d had a manatee do in Florida. They were a very sociable bunch. We were in the water for 45 minutes and I actually lost Craig for a large part of it as I was absorbed in the sea lion interactions. I managed to find him and was a little weary when I asked “you saw them right…?” Thankfully he had and he was very happy! We swam together for a bit and he pointed to one of the sea lions which for some reason caused four of them to chase Craig who frantically swam away like desperate prey while I laughed like an absolute lunatic through my snorkel. 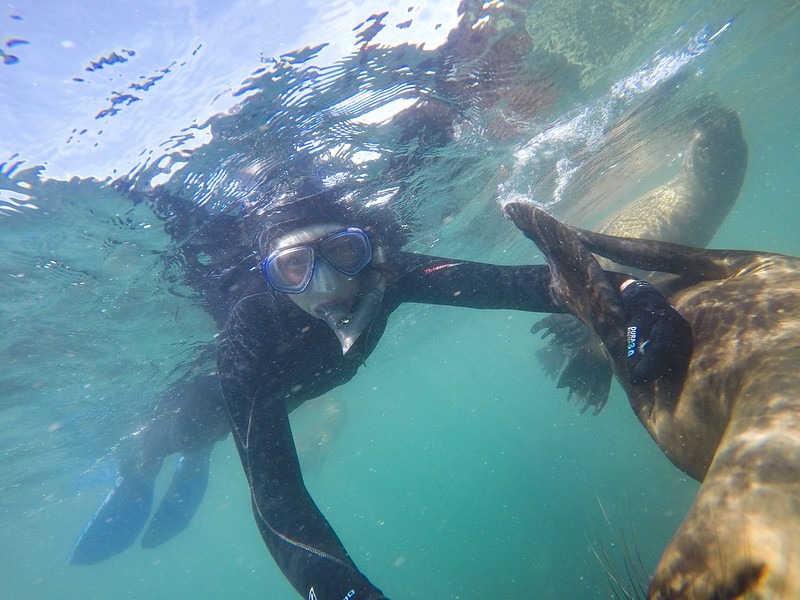 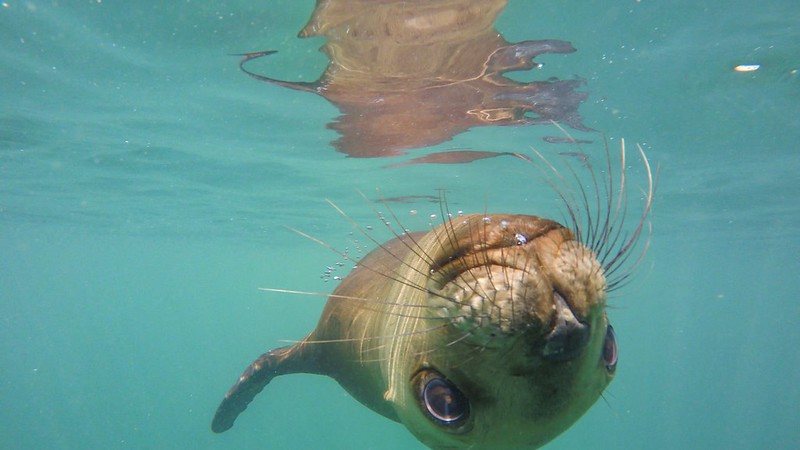 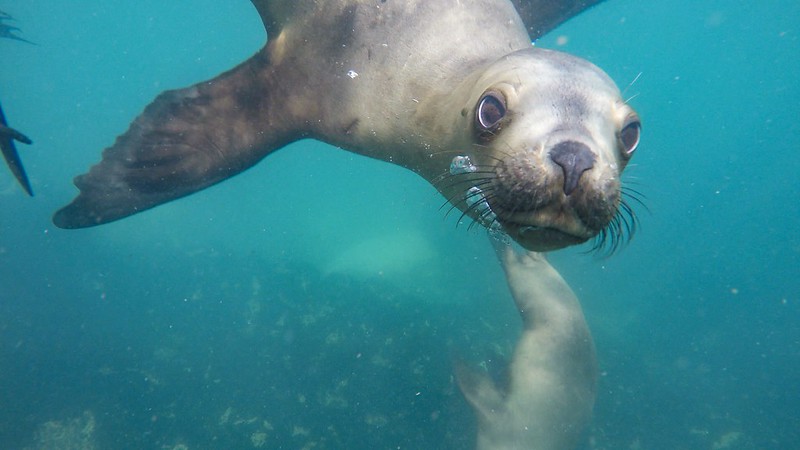 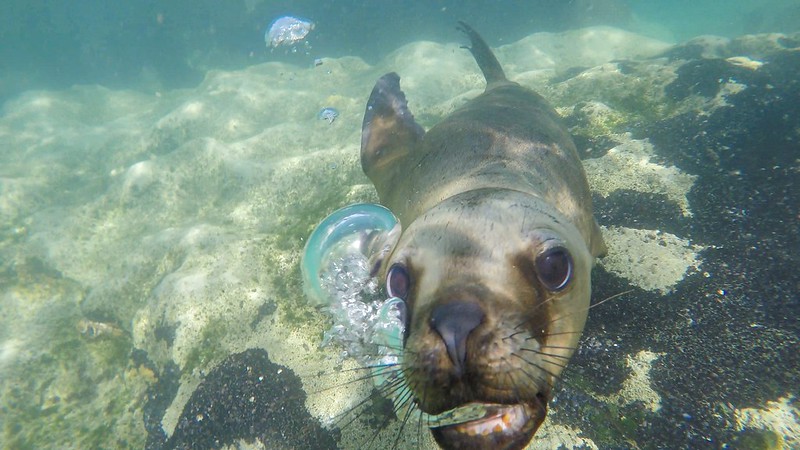 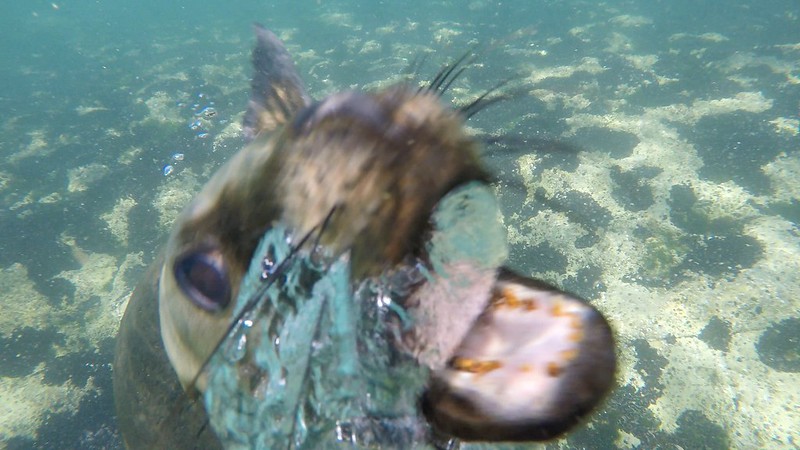 As soon as the guide said it was time to head back to the boat Craig seemed to become an Olympic swimmer and was back on board before I’d barely moved a meter. He was still trembling like a leaf but luckily he had a great time too and we were both chuffed that we did the trip. 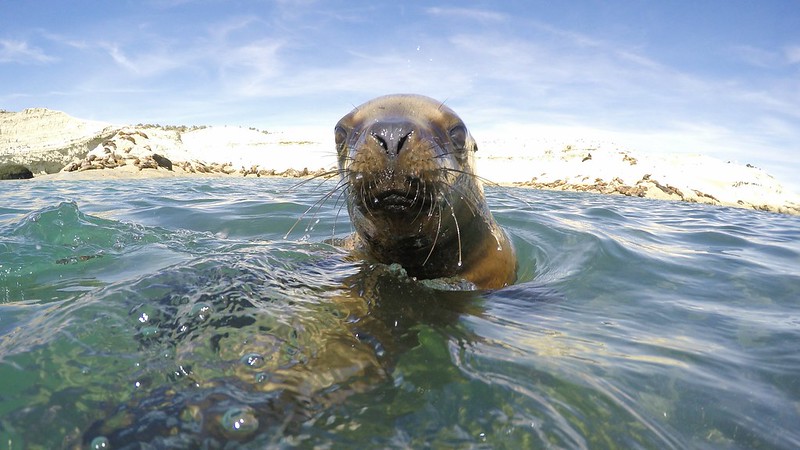 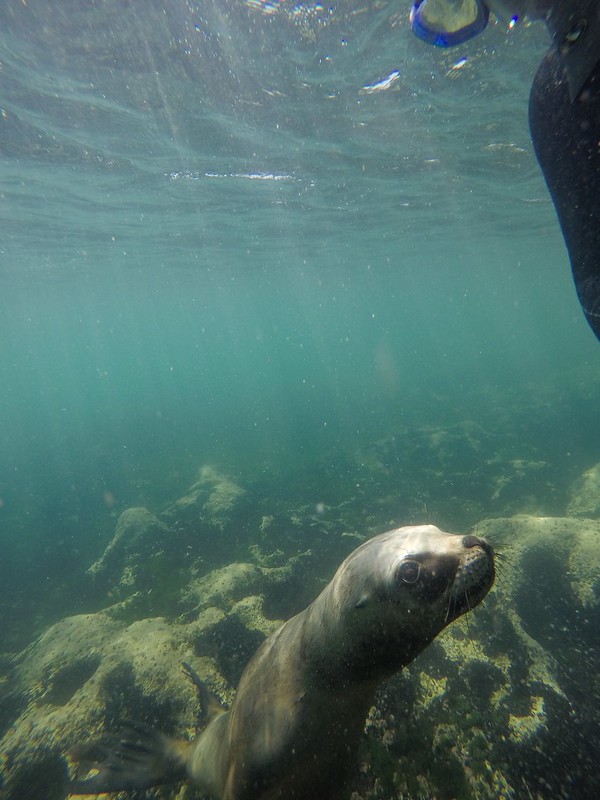