Peninsular Valdez is one of the best places in South America to view wildlife but we never intended to go there because Argentina is quite frankly bloomin’ expensive. Luckily for us though the Argentinian peso had taken a big dip which actually meant we could afford to spend a bit longer in the country and see more than just the peaks of Patagonia.

I first heard of the peninsular 10 years ago when a friend of mine did an 18 hour or so roadtrip – the moment he arrived at the coast an orca beached itself on the sand, grabbing a sea lion in its mouth!! It wasn’t the right time of year for us to witness this unusual hunting technique but October was one of the best months to see penguins and the southern right whales who come in the thousands to give birth and teach their young to dive.

There’s no public transport around the peninsular so the only way to visit is with a rental car or on a tour. Luckily a couple weeks before we met a french lady who was visiting the area on the exact same day as us and she was renting a car so we agreed to split the costs. We flew from El Calafate into Trelew and on the tail-end of my cold I had blocked sinuses which caused me the most excruciating pain as the plane was descending. The pilot was a maniac too, I guess it was a short flight but on takeoff we practically flew vertically through the sky and the same as we descended so the pressure built up in my head and it felt like someone was trying to pull my eyeballs out. 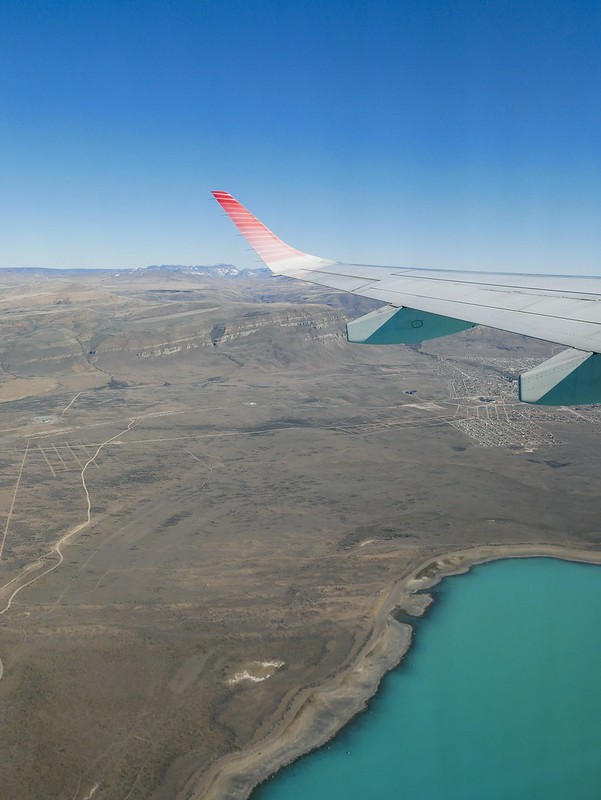 Soon after landing a car pulled up with the french lady – we were relieved that it had all worked out and we hadn’t been left stranded. She’d also found another french guy to join the trip, thus splitting the car cost four ways. We headed straight from Trelew to the tiny village of Puerto Piramides which sits within the Peninsular Valdez protected area. We had booked into separate hotels so we bid our farewells and agreed a meet up place for the following morning.

It was already 9pm and we’d left our accommodation at 7am that morning so we were shattered but also very hungry so we wandered into the village to buy some food. A car pumping out loud music slowly drove past us as he navigated his low clearance vehicle over a speed bump, so for a few seconds we were walking alongside his car. The driver was wearing sunglasses (at night) and so was his golden retriever who was sat in the passenger seat, both bobbing their heads to the music. It was such a strange sight in this remote village.

We spotted a huge ring of blue cheese in one shop and asked the worker for 200g, he cut off a slab, put it on the scales and it read 198g and Craig and I began cheering him! Then he held his hand up as if to calm us down and he proceeded to get his sharp knife and scoop up a crumb that had broken off, dropping it onto the scales and suddenly it read 200g and Craig and I (I don’t know what came over us) erupted with support for the mans precision and he finally began to smirk at our pure joy.

The following day we excitedly headed off on our roadtrip around the peninsular. Our hotel owner had given us some information that Orcas may be around Caleta Valdez which was a total surprise to us as I just didn’t expect to see them at this time of year. So we set off on the dirt roads, passing miles and miles of barren shrub land. For the guanacos though it was a very nice place to live and we saw plenty of the llama related animals running across the roads and through the bushes. 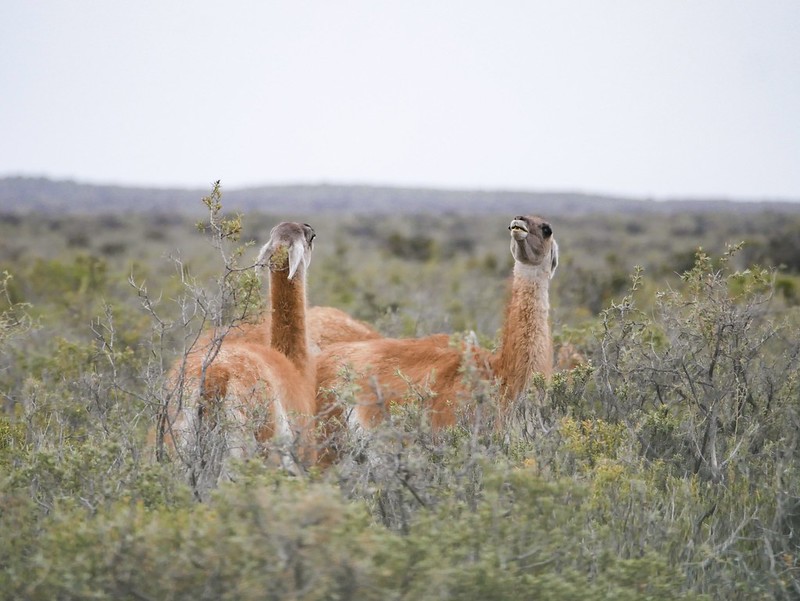 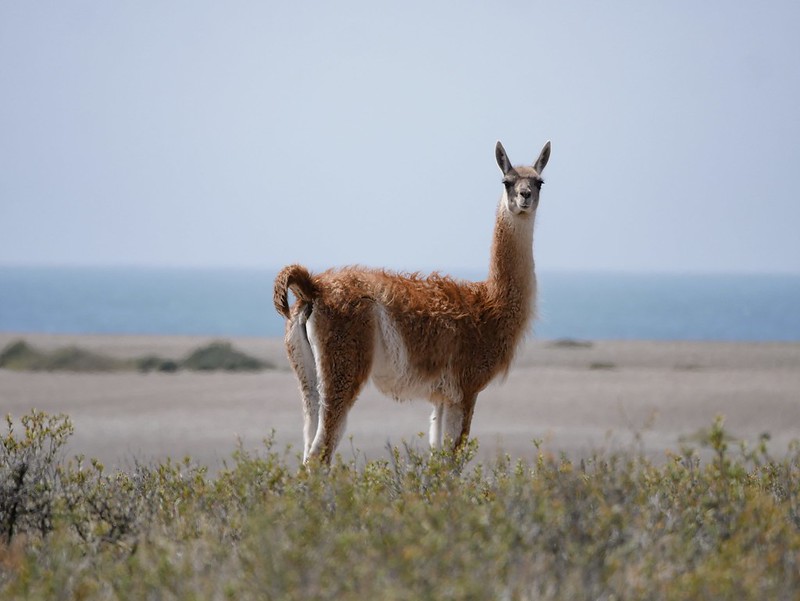 It took us almost two hours to reach Caleta Valdez – the washboard riddled dirt roads took their toll on our 2wd car. We set off on a walk to visit the sea lion colony which is also an important feeding ground for orcas. Some people we passed said they’d just seen 9 orcas in the inlet so we rushed down but the next people we saw said the orcas were heading north and that we should continue to the next viewpoint. So we ran back to the car and sped up the coast to the penguin nesting area. 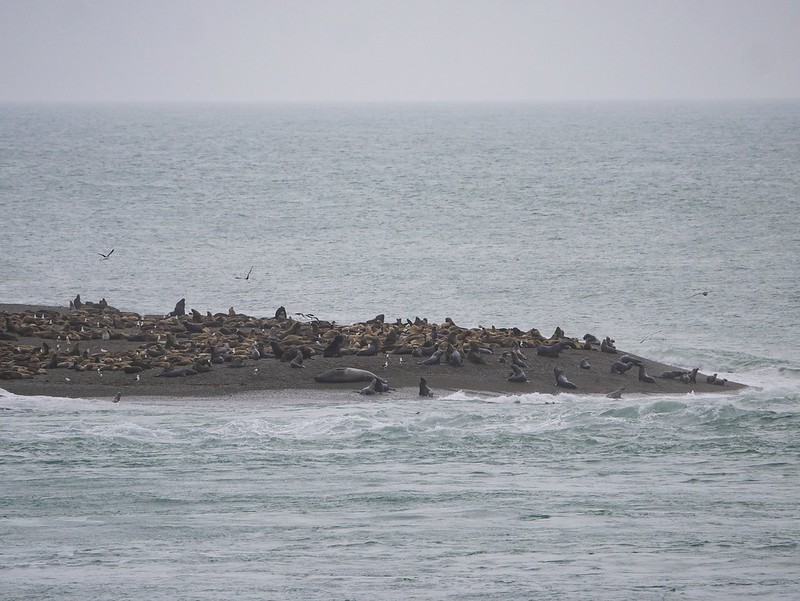 The penguins nested on the sandy slopes and some were right next to the pathway. I couldn’t believe how close they were, I was like a kid at Christmas! They were a delight to watch waddling from the water up the hillside. Their nests were little holes dug into the sand and we even saw a couple mating. They looked very strange when they were sleeping though, sometimes they slept standing up with their heads slung down like a strangled goose. 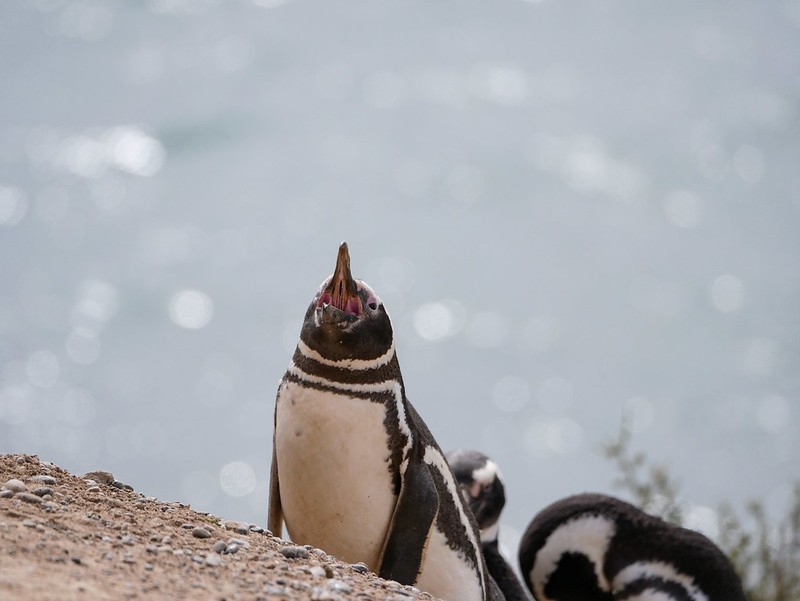 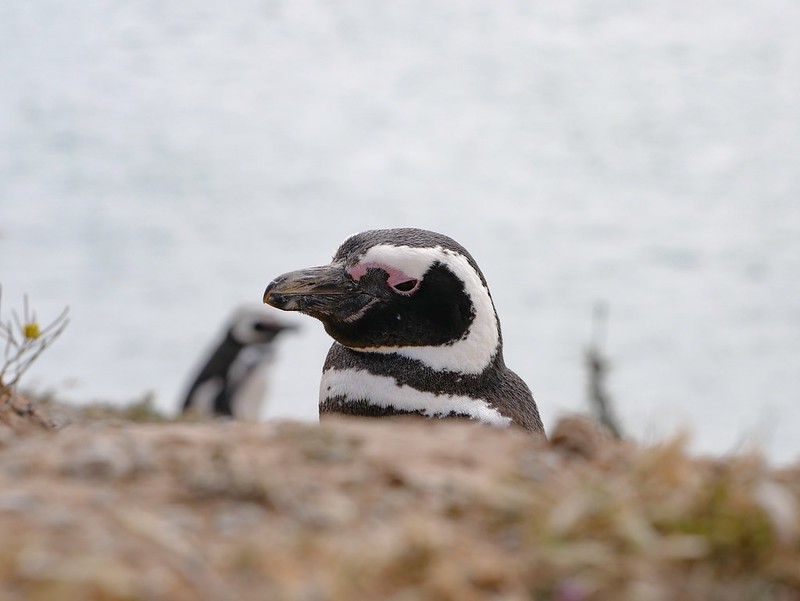 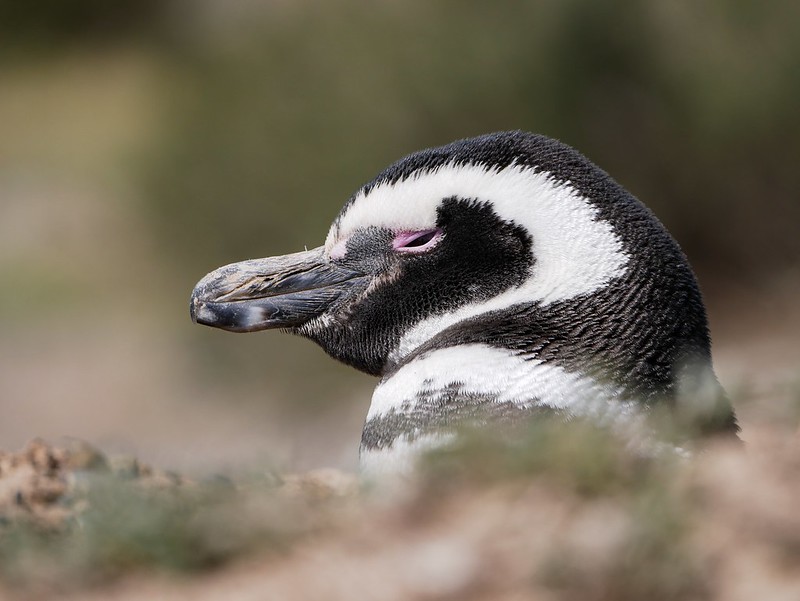 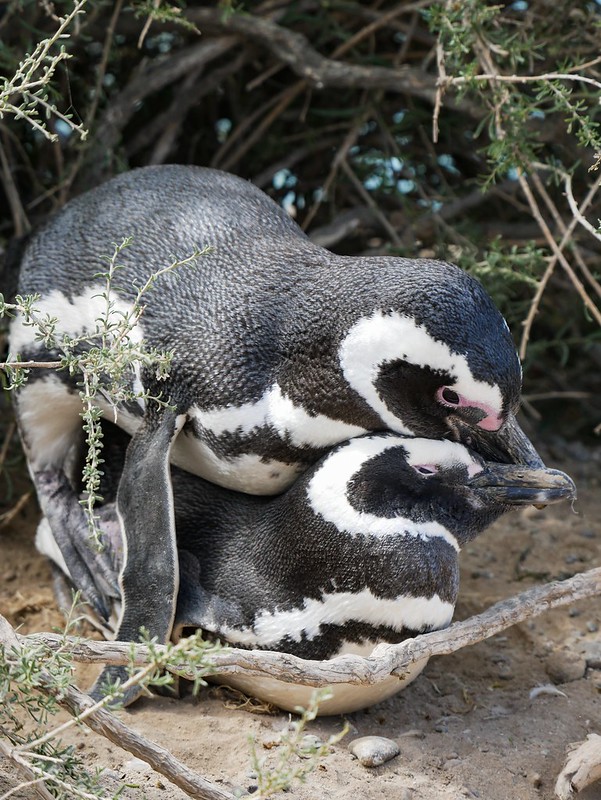 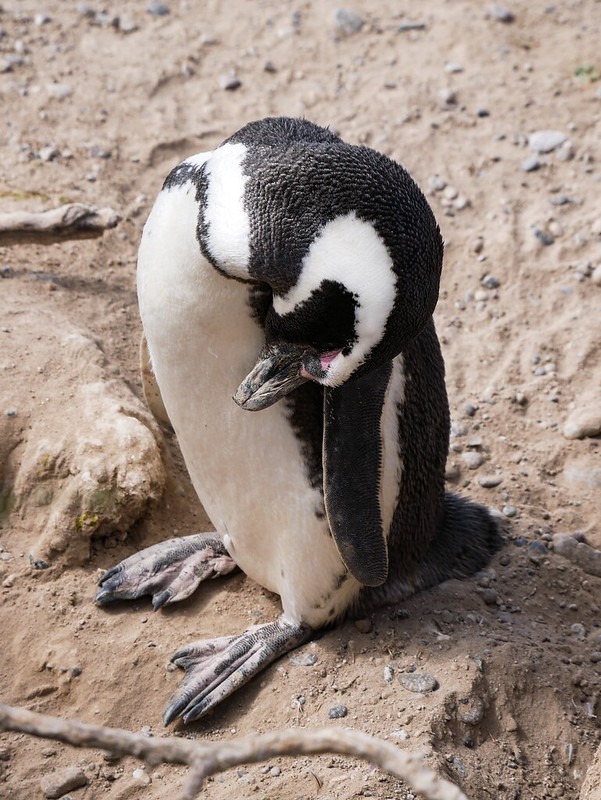 We watched the penguins while we waited for the orcas to arrive but a lady overheard us querying where they were and she said they’d already swam past – just 10 minutes before we arrived. So we dashed off again, stopping at the next viewpoint only to be told “they swam by three minutes ago”. A tour bus was also searching for the orcas and the guide was very helpful to us, demanding we drive north ASAP to try and see them. 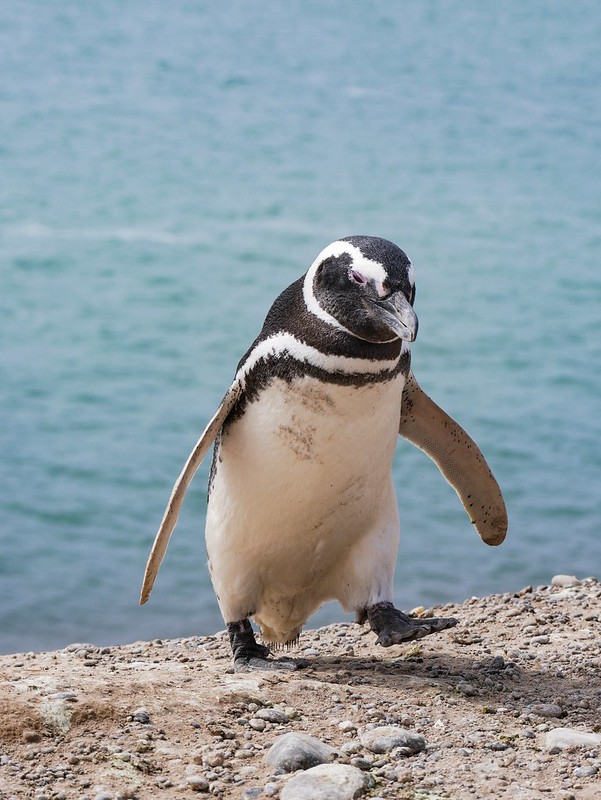 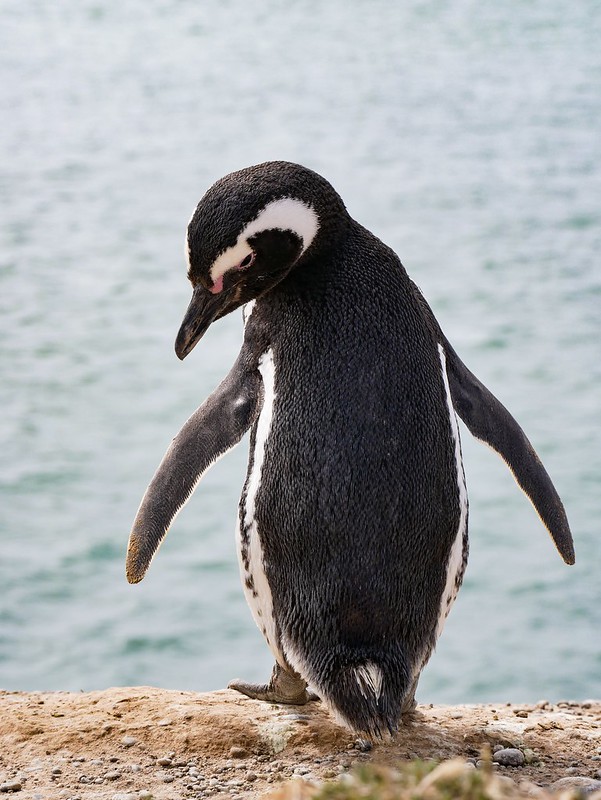 The area where the orcas were swimming was a strange inlet of the sea protected by the land but the further north we went the more islands appeared and therefore too many routes for the orcas to take. Our chances were running out and the road was veering away from the coast but suddenly Craig spotted a dorsal fin in the distance and eventually the pod appeared! They were swimming near the opposite bank so they were quite hard to see without binoculars. We watched the group stop swimming north and focus their time in one location until two of the orcas fins glided through the surface of the water towards land. We couldn’t believe our eyes, the two orcas had beached themselves!!! We actually saw it happen! But we couldn’t see a sea lion so it seems they were actually using the area to practice the technique. It was amazing to witness them do this and after the practice run they continued south, which was our cue to drive back and hope they came past us again. 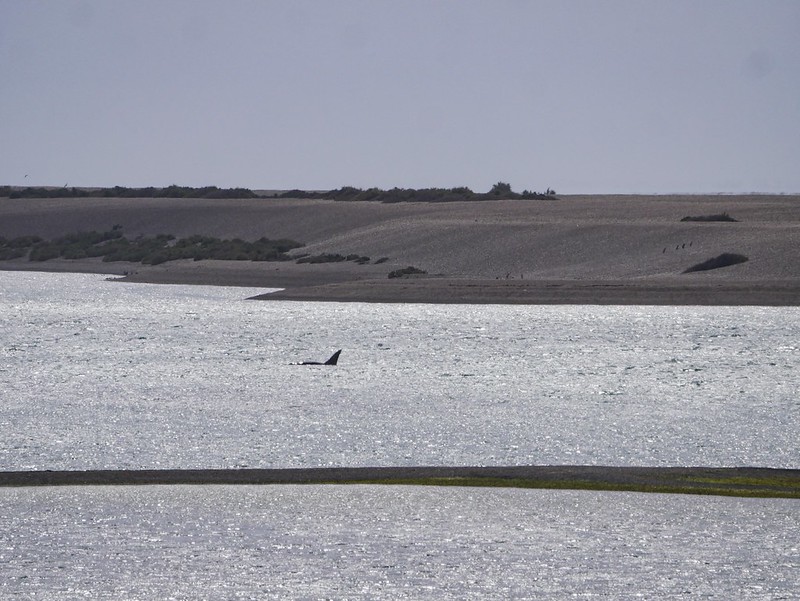 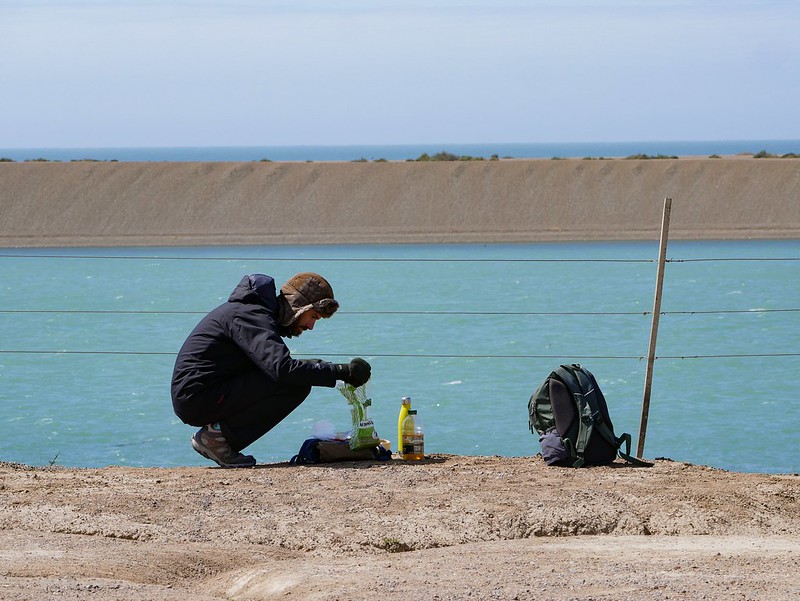 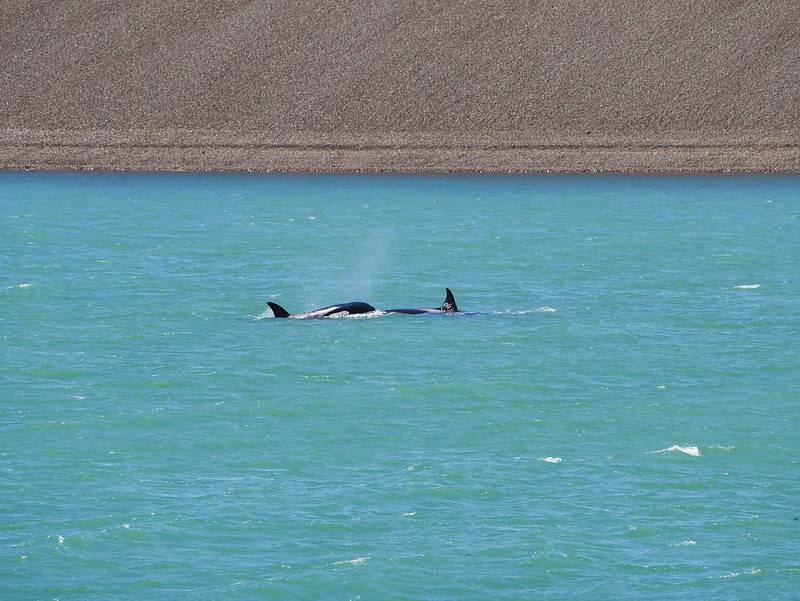 This time we were ten minutes ahead of the orcas so we sat down and enjoyed a picnic while we waited for their black bodies to rise out of the aqua blue water. The pod seemed to have about 6 -9 members and eventually they swam parallel to us, working their way south. When they passed us we drove on again, back to the penguin spot and here we watched the orcas hunting! They were doing so underwater but it was clear that they’d caught a sea lion as the surface of the sea became covered in an oil slick and the seagulls were going crazy. The orcas were also acting differently and were more active, tail slapping and spy-hopping where they poke their heads out of the water to look around. Then they killed a second one and soon the seagulls were scavenging scraps of sea lion meat. Everyone was over the moon at the orca sighting! 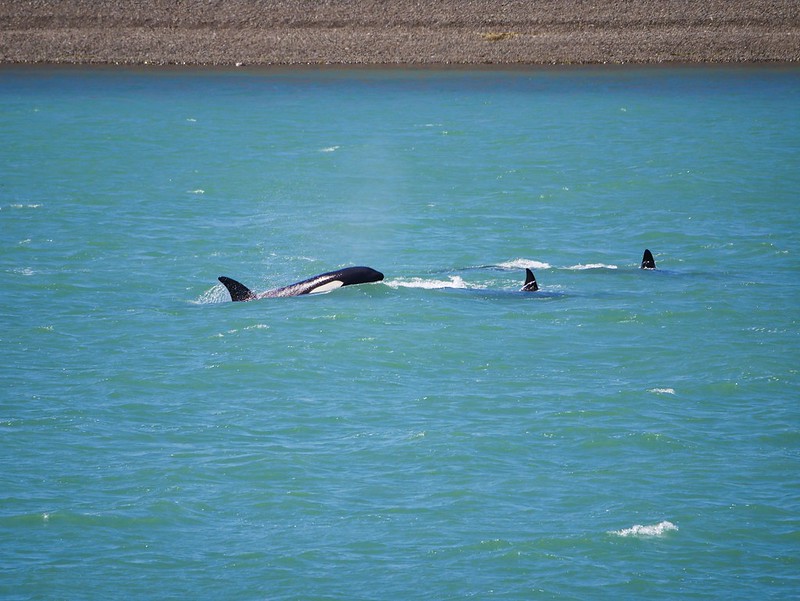 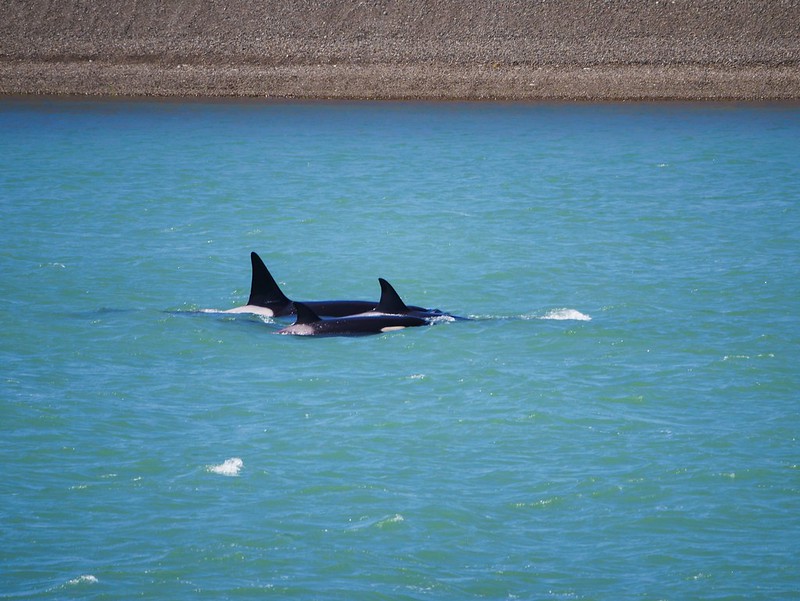 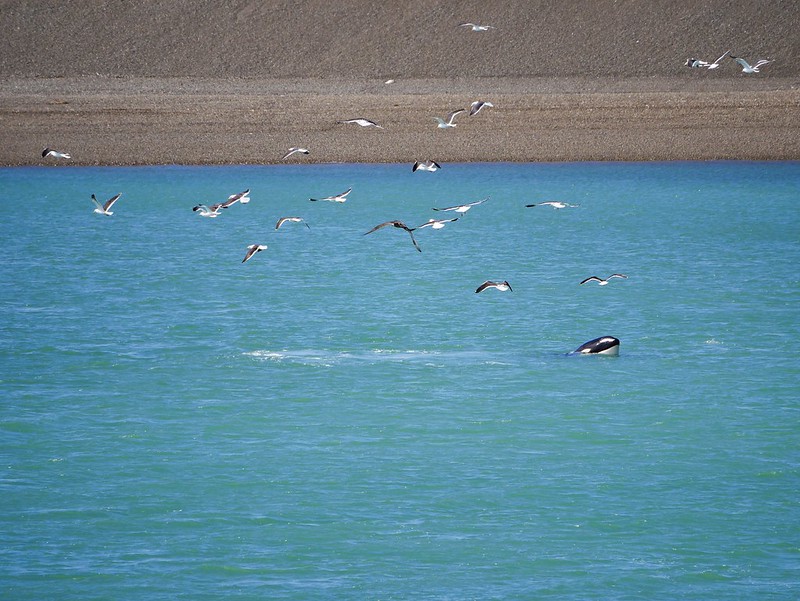 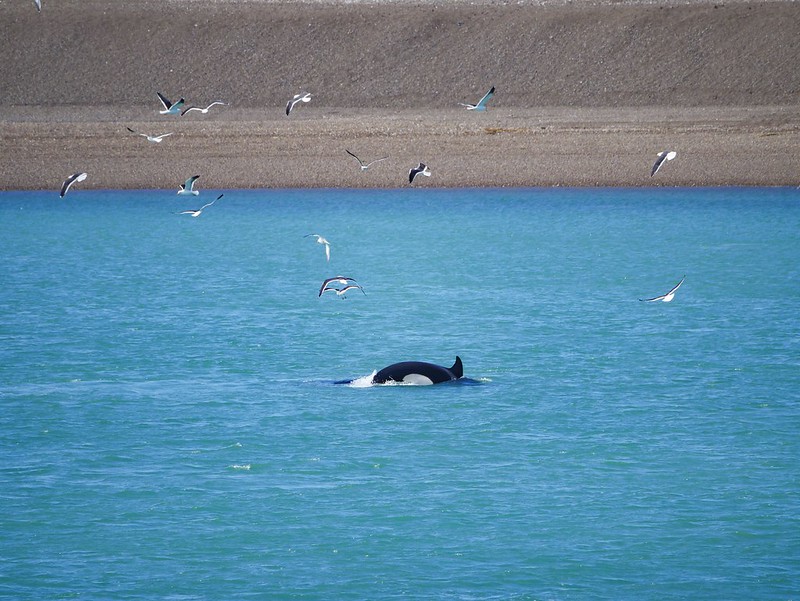 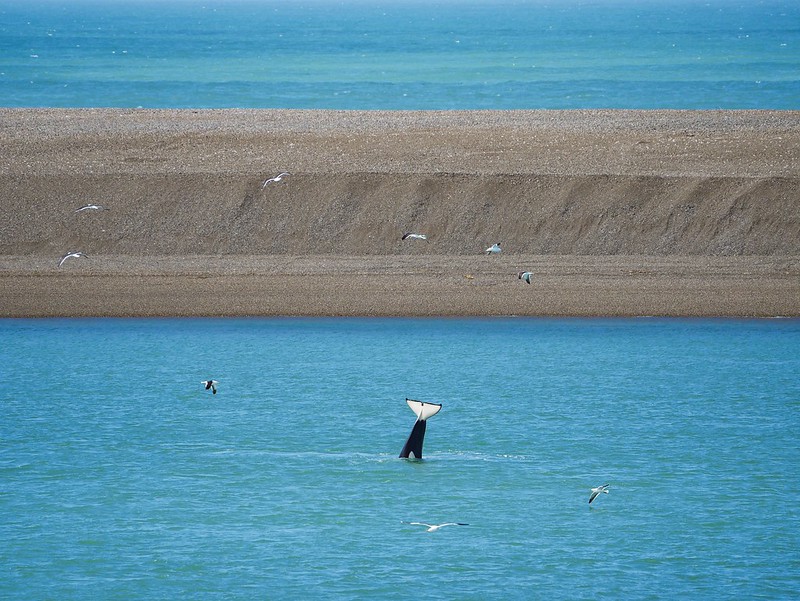 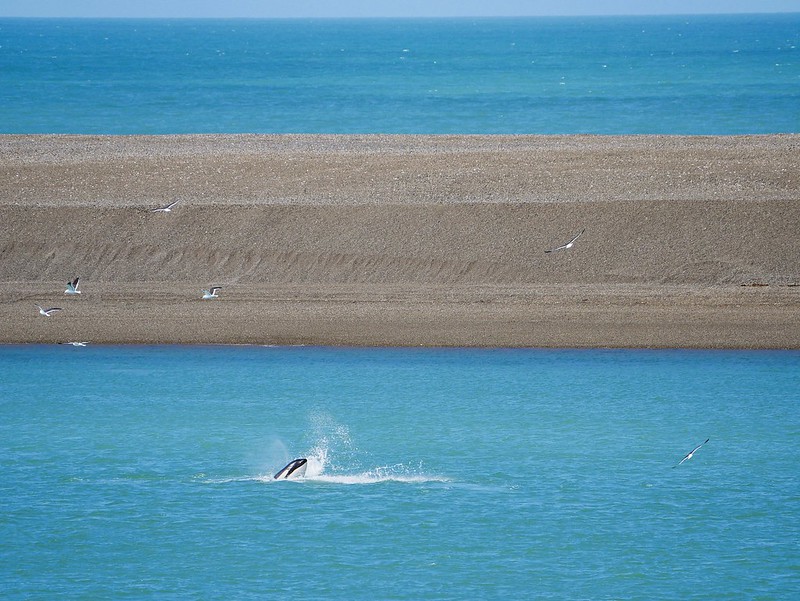 It was time to head off and see more of the peninsular so we drove to Punta Norte (in the north). This is the location where the orcas traditionally hunt in spring for the sea lion pups but today it was just a small group of lazy elephant seals, flicking gravel onto their bodies. They were quite boring to watch as they didn’t move and we couldn’t see the males unique elephant trunk style faces. When we witnessed them in California it was mating season and that’s the best time as the males are fighting for the ladies and it’s a brutal but fascinating sight. 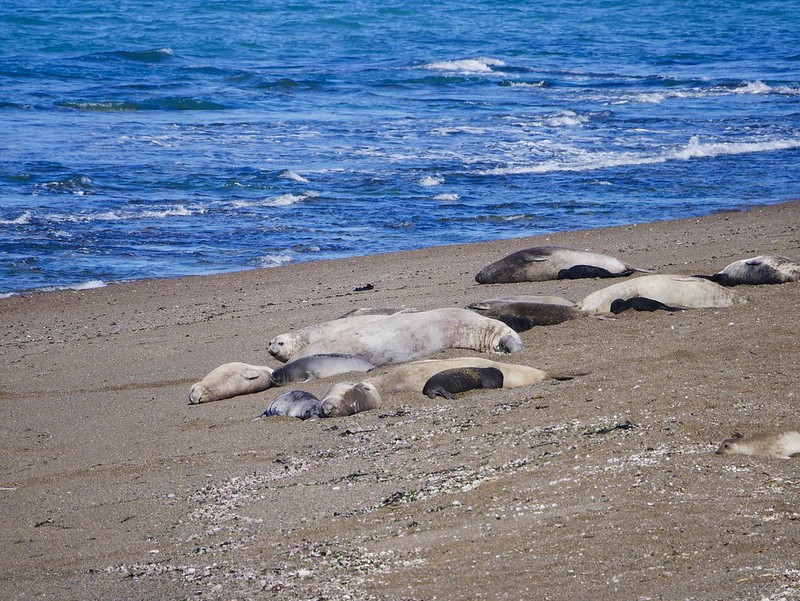 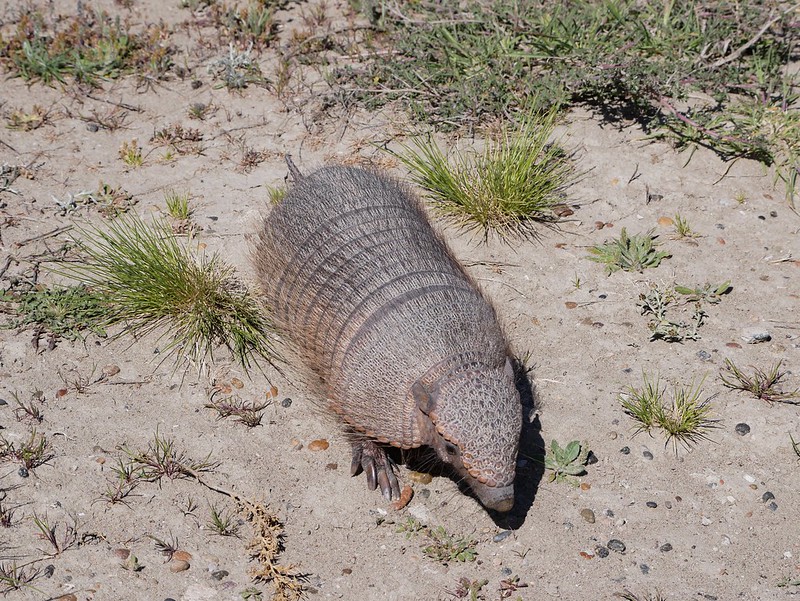 An armadillo ran between us as we walked through the car park and we passed a few of the emu style animals too. We ventured back to Puerto Piramides but veered off on a little drive to Loberia Piramides which is a sea lion colony. They were all piled up on flat rocks beneath us and they were quite entertaining to watch. The big males have a sort of furry mane around their necks which is how they get their ‘sea lion’ name. The males were huge and dominant, baring their teeth to other males and flirting with the ladies. We watched some shuffle to the edge of the rock and jump off in a belly-flop motion before swimming in the clear water. From the viewing area we also spotted two southern right whales swimming in the sea and we couldn’t wait to get a closer look on a boat trip the following day. 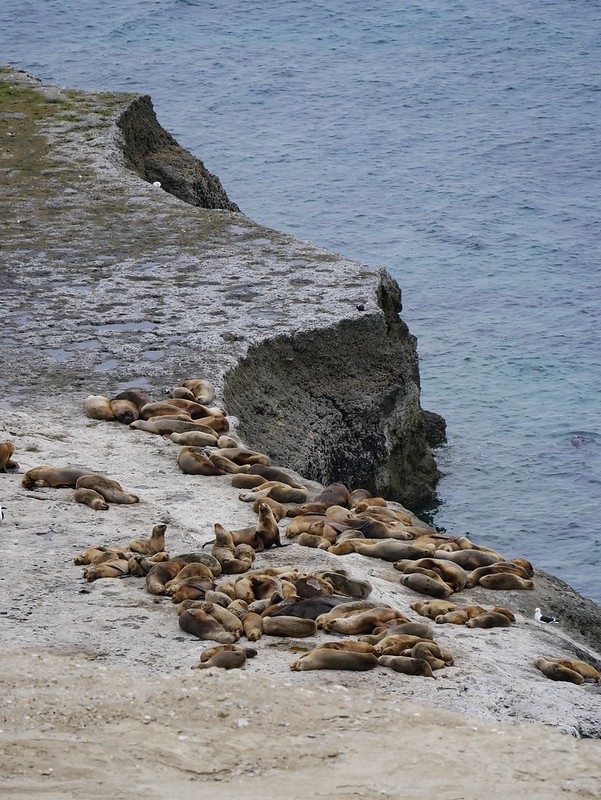 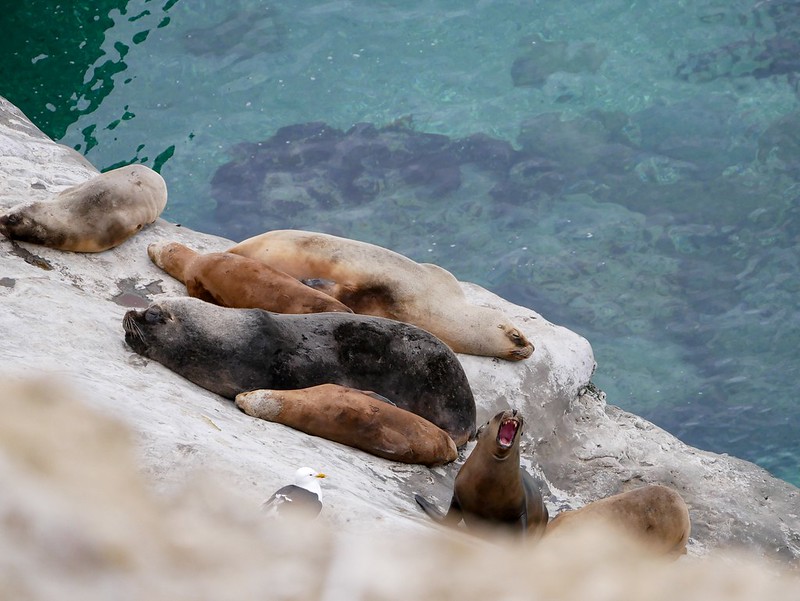 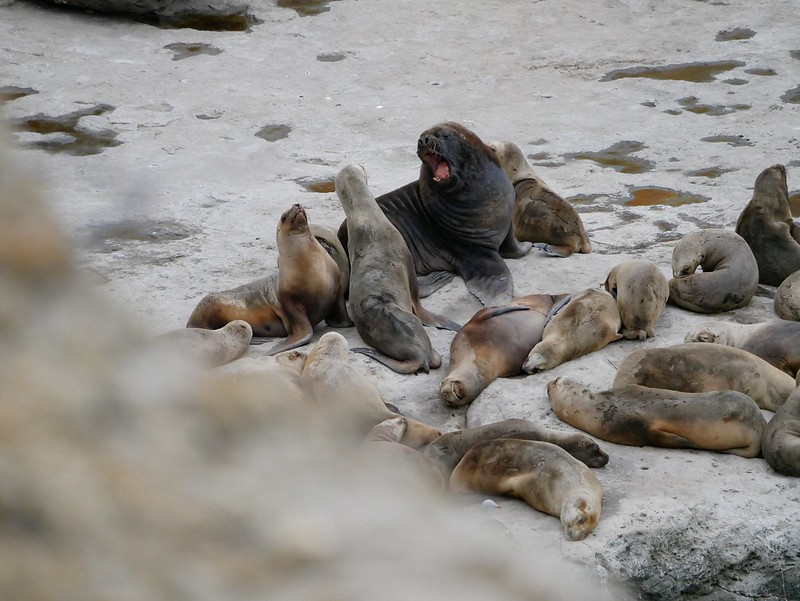 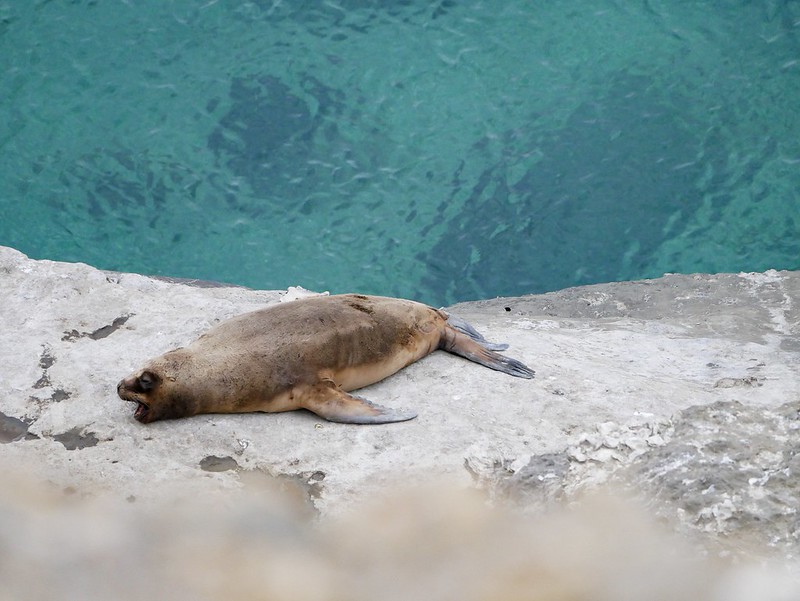 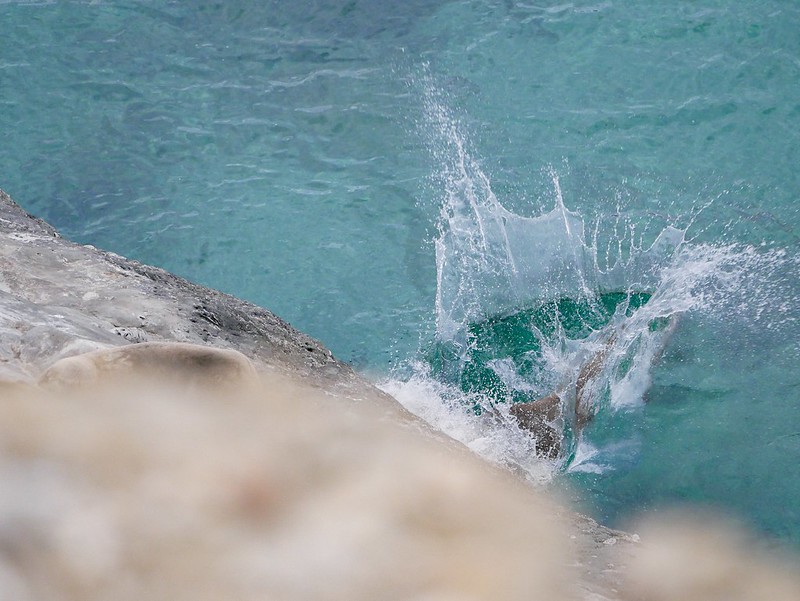 We ended our roadtrip with the French couple in a little eatery where we had pizza that was barely edible but it was accompanied with very tasty craft beer and stories of our orca sightings. 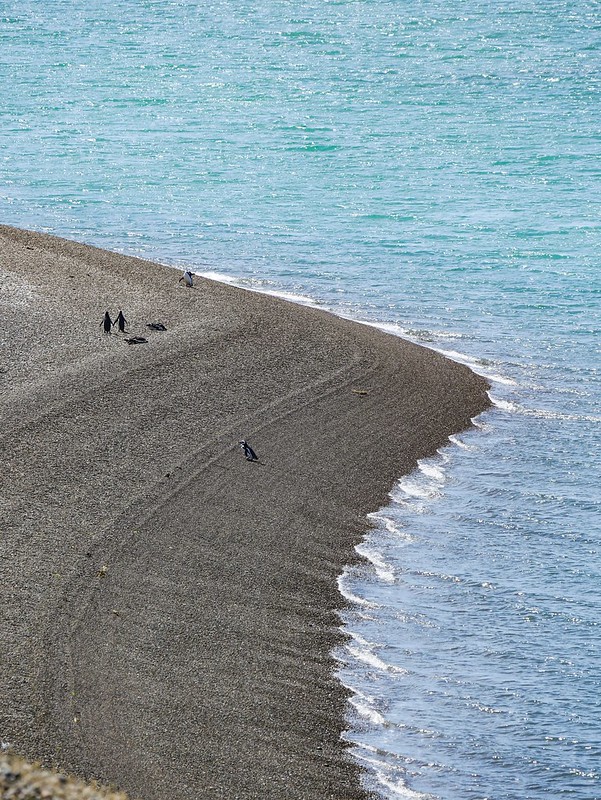 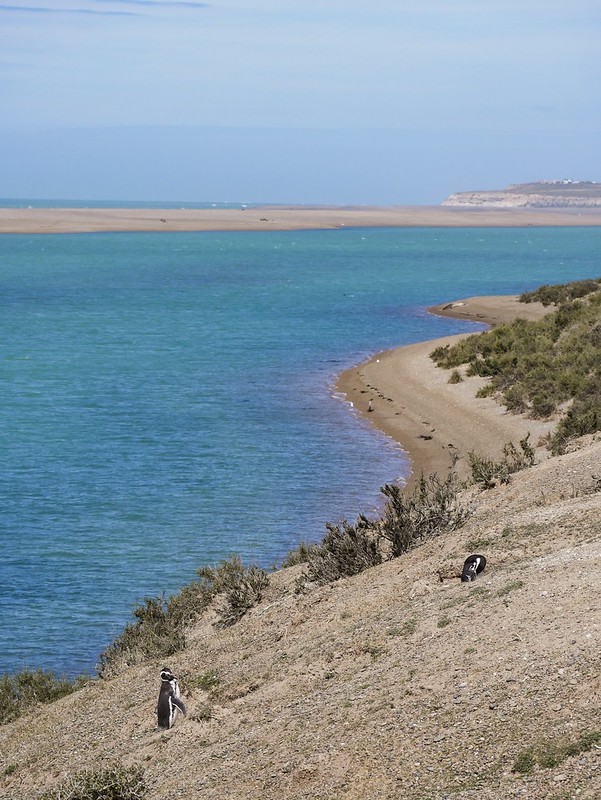 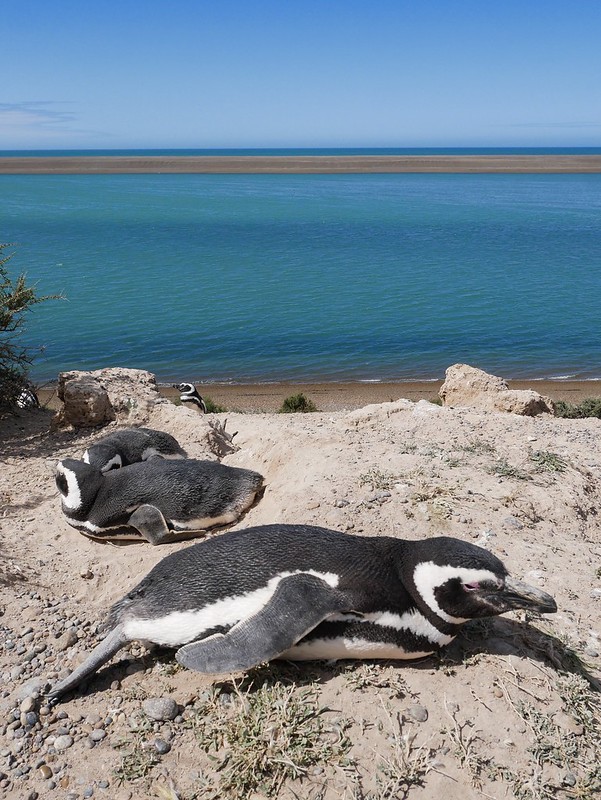