We hadn’t heard of Chiloé Island until we arrived in Chile and started searching for places to visit enroute to Patagonia. It sounded like an intriguing place where locals still believe in witchcraft and ghost ships. To get there we caught a bus from Puerto Varas to Ancud on the northern part of the island. A ferry took us across the clear sea and we arrived in an area that resembled the English countryside more than Chile. The landscape was very green with rolling pastures, cows grazing and little villages made up of unique wooden houses. 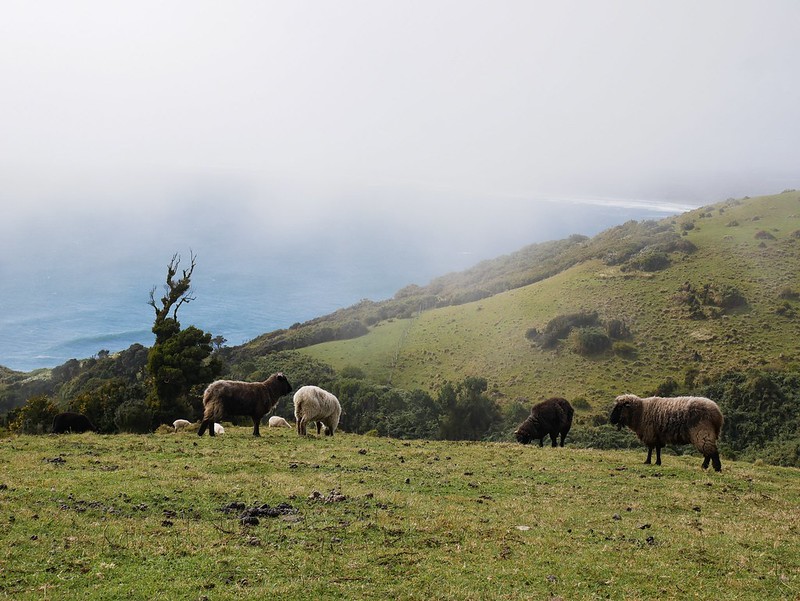 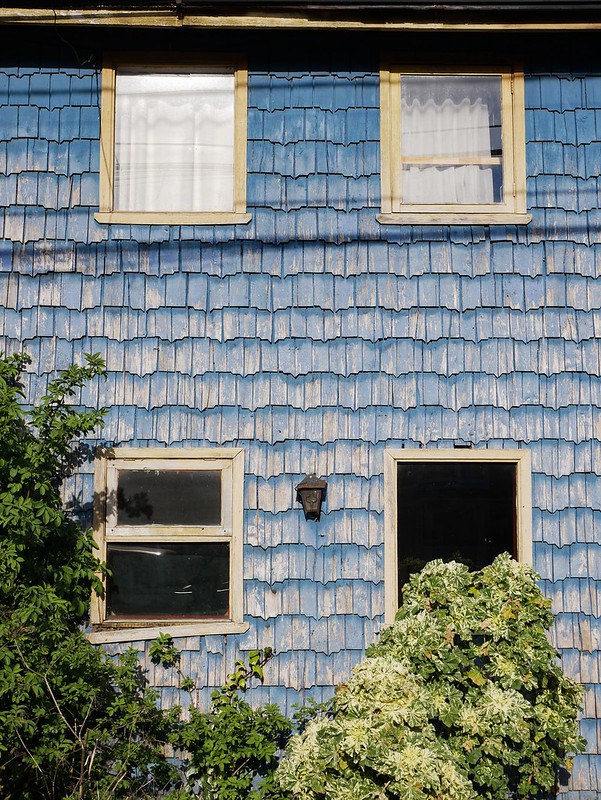 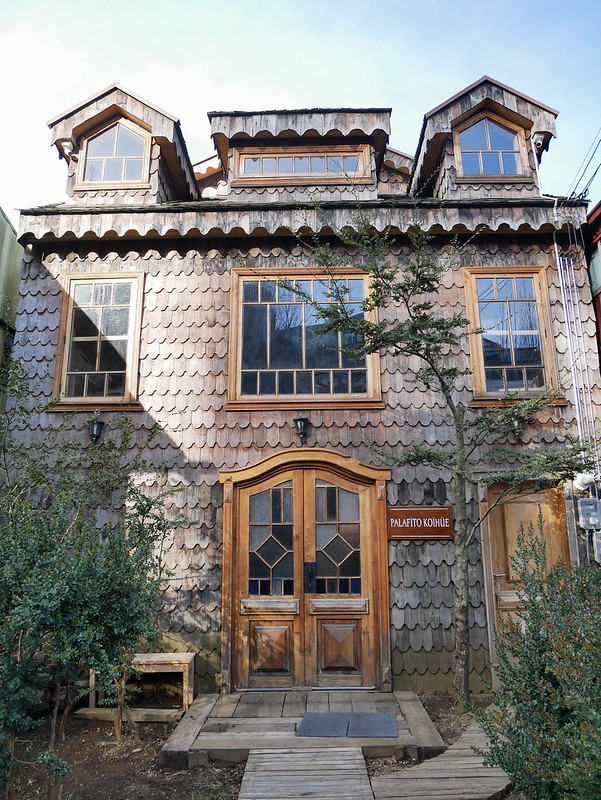 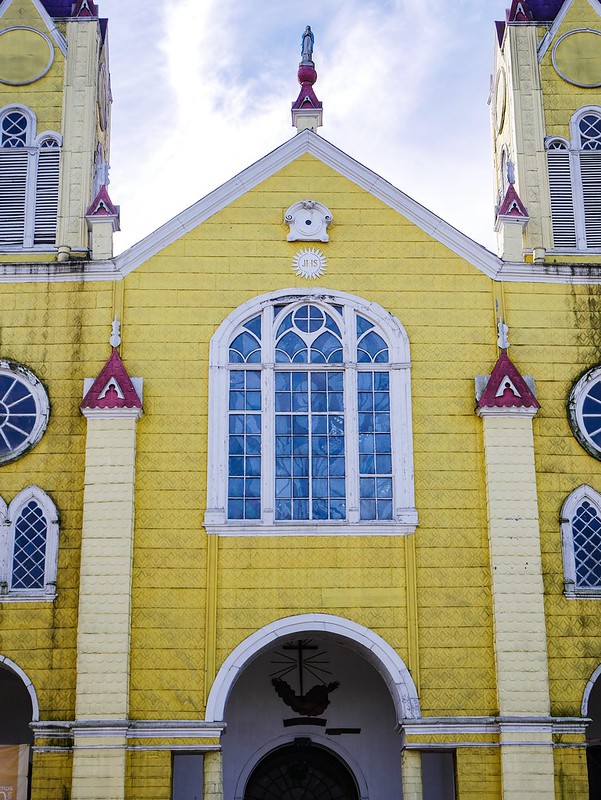 We weren’t interested in exploring Ancud itself, instead we wanted to use it as a base to reach the Penguin Reserve at Puñihuil. There are only two buses going there per day, at 1pm and around 6pm. We literally arrived just before the bus was due to leave so we were ready to drop our bags at our hostel and run for the bus station. Sadly no one was home so by the time the host arrived we had a mere 5 minutes to run 1km. The host was nice enough to quickly drive us to the main road but after waiting 10 minutes it became evident that we’d missed it.

Plan B was to hitch hike but first we had to leave the town as it was embarrassing thumbing a ride with so many taxis around. We walked a few kilometres up a hill and waited at a bus stop with big smiles on our faces and our thumbs out. The locals were very sweet, pointing left or right to suggest they weren’t driving our way. After 10 minutes a little car pulled up and a nice chap offered to take us to the road junction to Puñihuil. He didn’t speak any English and our Spanish is atrocious but we managed a basic chat and think he was telling us he was a potato farmer. But who knows really, he might of been explaining he had a degree in accounting or something.

Once he dropped us off we walked down a very lonely road, 13km away from the penguins. We began to wonder if it was a bad idea hitching in the off-season but after walking twenty minutes a car pulled over. It was a young dad with his kid, pumping the music loud. They drove us to the end of the ‘main’ road before dropping us off and taking their very beaten up car down a rough dirt road.

We had a pleasant 1km walk with views across wild beaches before we arrived at Puñihuil. It was a wide stretch of beach backed with a few buildings offering the boat tours. We could of organised the whole trip with our hostel but we were determined to get a cheaper price doing it ourselves. Sadly the actual boat tours turned out to be a lot more expensive than we’d anticipated and we were looking at 7000 Chileno pesos ($10) per person for a thirty minute trip but we had little choice after two hours getting to the damn place. 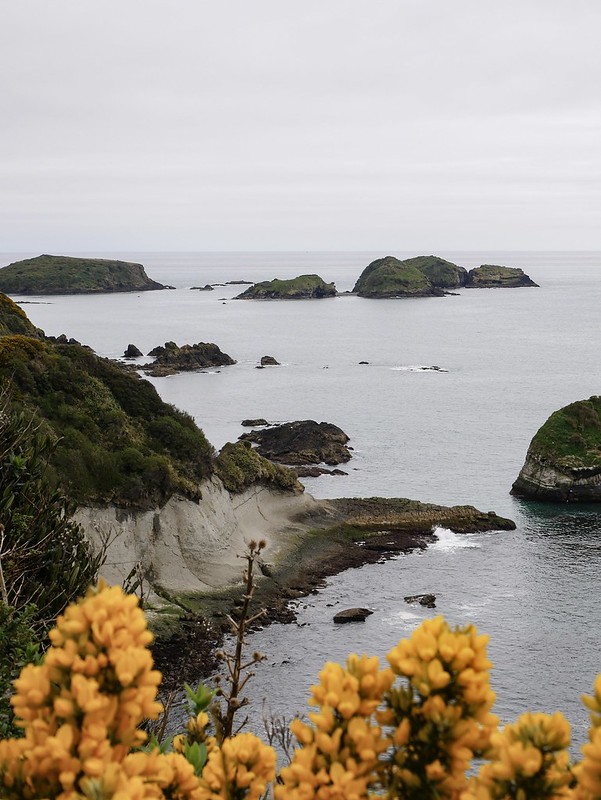 We were told to stand on a wheeled cart and a man in waterproof dungarees pushed us into the sea so we could enter the boat without getting our feet wet. The boat was huge considering we were the only people on board and we even had a private guide. He spoke English, very confidently, but his speed and pronunciation made it impossible to understand. In fact it sounded like he was speaking with a potato in his mouth and suddenly islands were called Islam. 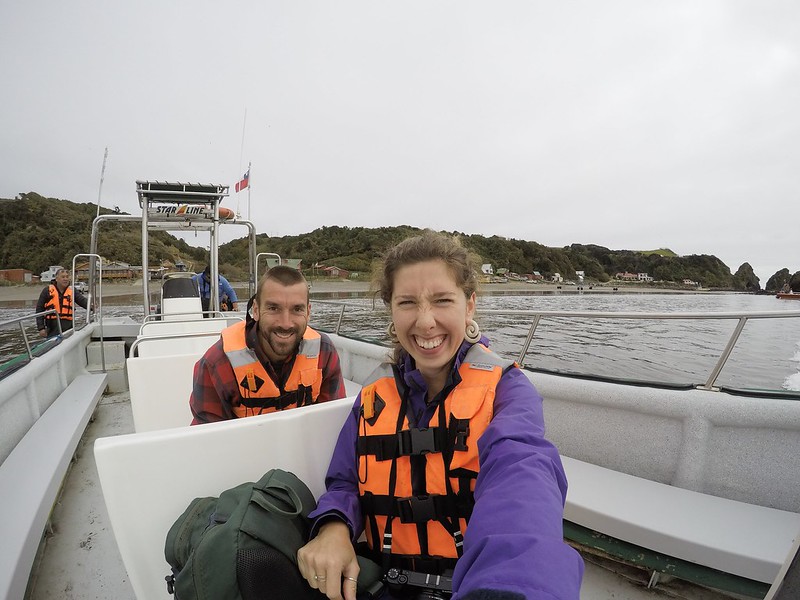 The penguins live on the islands just off the shore, you could literally swim there (although I guess it’s not legal in the reserve). There were a few islands protruding out the sea with rocks around the base and steep grassy slopes. Within a few minutes our guide spotted a penguin. It was a Humboldt penguin that wasn’t in the mood to pose for photos so we only got a brief glimpse of it. But moments later we had dolphins swimming around our boat. There were half a dozen coming right up to the side of the boat and the captain just went up and down a small channel between the islands for ten minutes while the dolphins followed the noise of the engine. 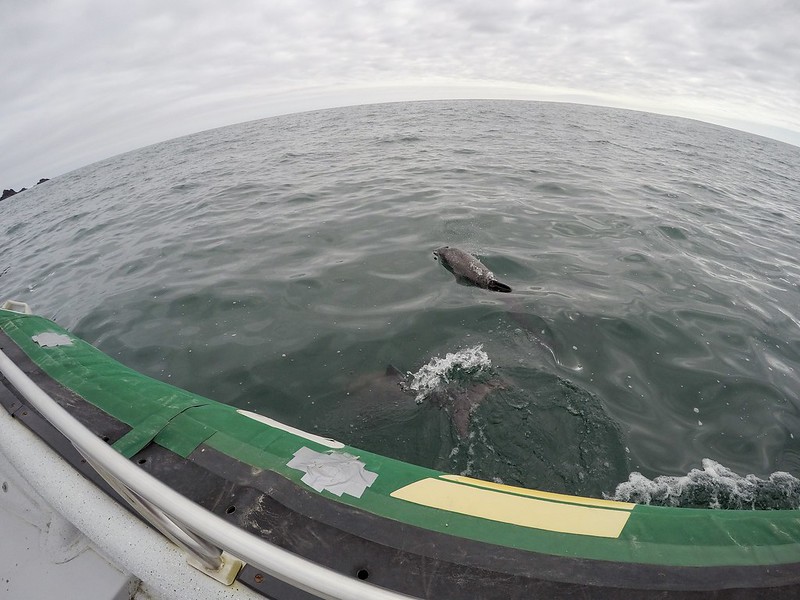 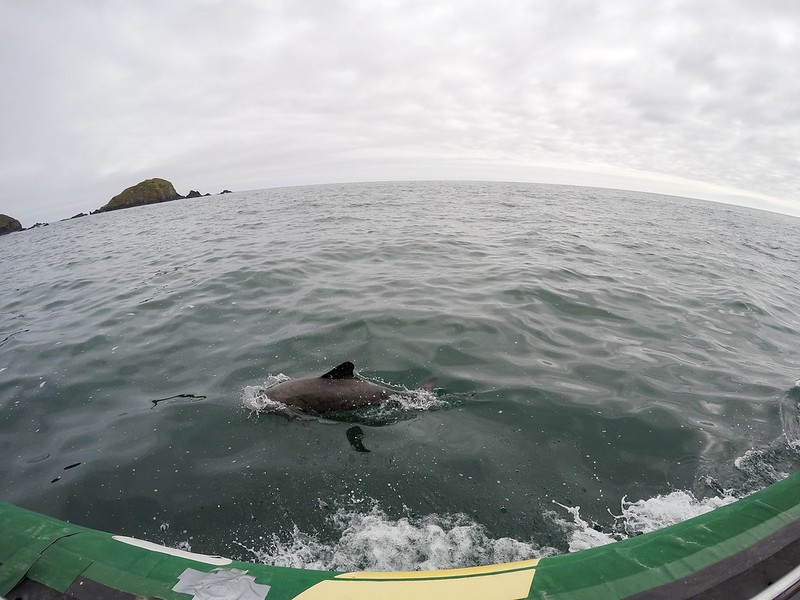 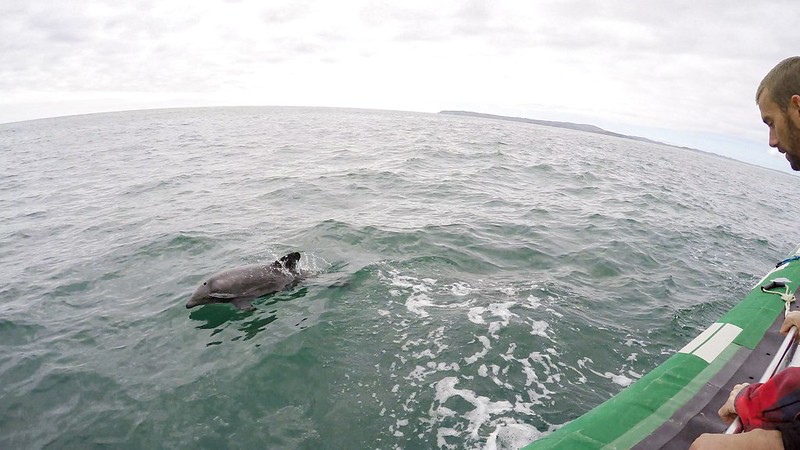 The steep islands were also home to some beautiful black and red birds which had the most incredible eyes. It was like little blue sequins placed in a circle around the eye. There were quite a few different varieties of sea birds although I couldn’t catch their names with our guides slurry English. Suddenly we spotted a new penguin beach itself on a rock when the tide pushed it in. The penguin awkwardly waddled through the slimy seaweed, occasionally slipping over and almost looking back at us as if to see if we witnessed his mishap. Somehow it ended up with seaweed wrapped around it’s body like a natural feather-boa. This penguin was a Magellanic penguin, although very similar looking to the Humboldt it’s rare to have a place where the two different breeds live together. I was expecting to continue to the next island and see dozens of penguins but the trip ended with just one other sighting up on a grassy slope. So we literally saw just three penguins, but somehow we were very happy thanks to the playful dolphins. Apparently its best to see the penguins in the morning and evening as during the middle of the day they’re out at sea fishing. 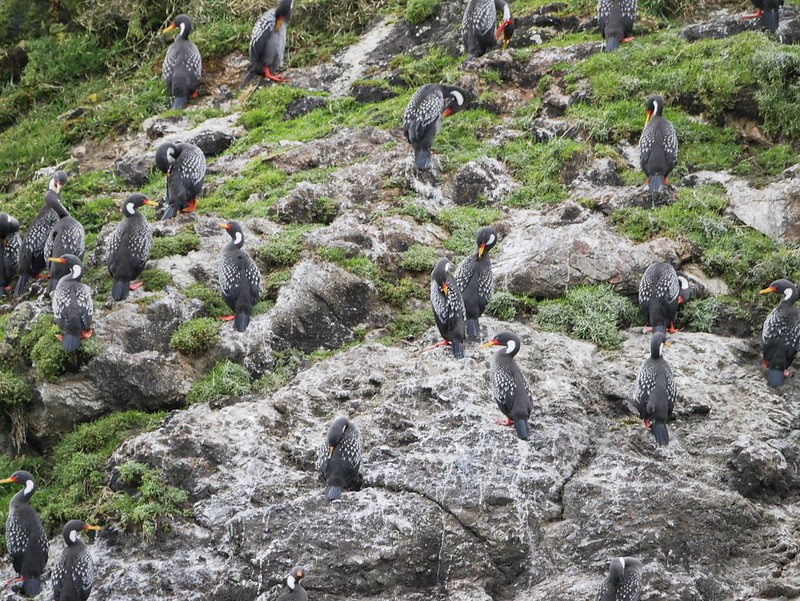 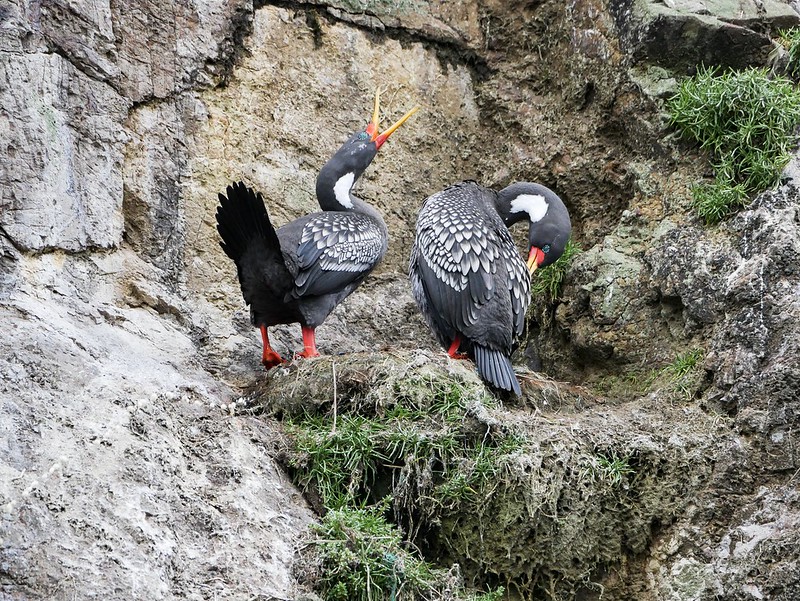 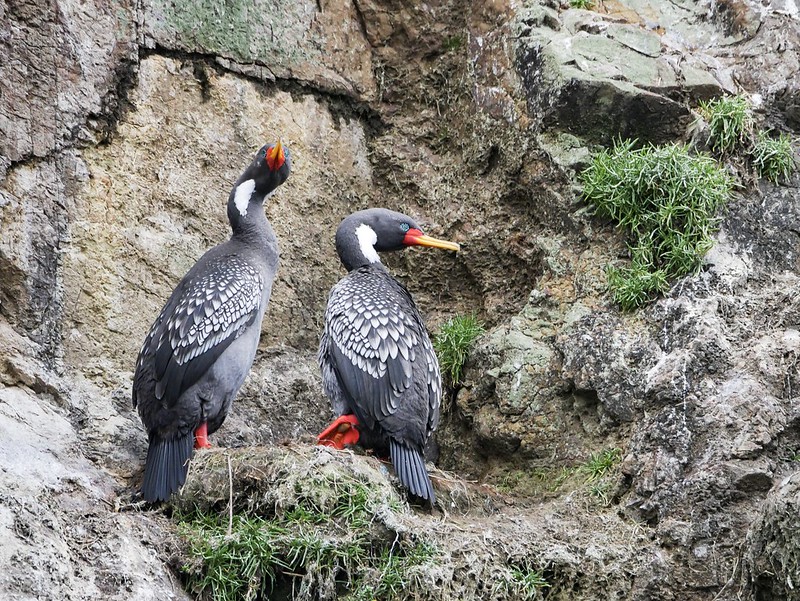 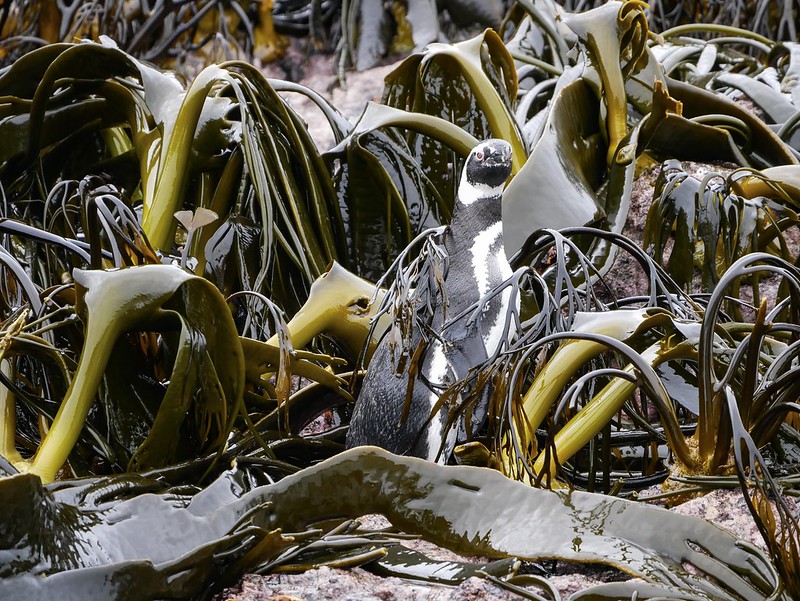 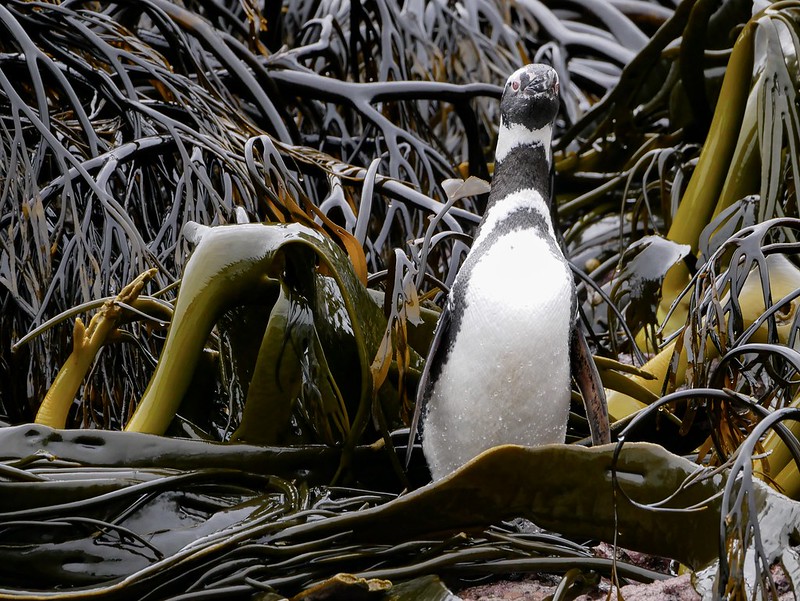 When we finished up the guide asked how we arrived and we explained that we missed the bus and hitch hiked so he very kindly said his boss was heading back to Ancud and could take us there for free! While we waited for the boss the staff had some after work snacks. They grabbed some weird looking rocks from the back of their truck and cut them open with a saw. Inside were lots of bright red balls. One guy shoved his mucky finger around the edge of the red thing until it was released and he passed it to Craig to try who nervously cackled as if to question if they were for real – was it really edible?! So Craig slurped it down and his faced screwed up. He said it was like an oyster, but more rustic, extremely salty and with a generous portion of mud and sand. Thankfully I had my vegetarian card to play so I dodged that bullet! 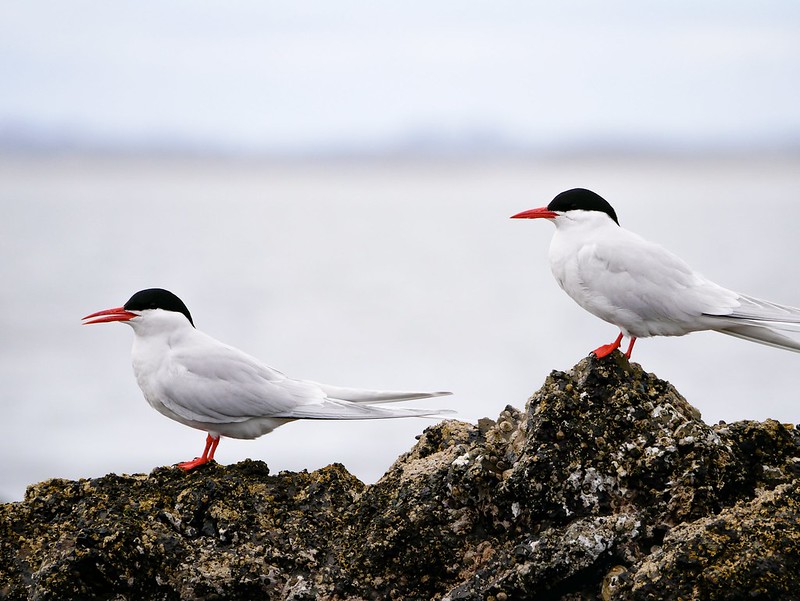 But the locals were loving the stuff, which they called ‘Purey’. A lady brought over some lemons and the men continued sawing new rocks open, fighting over the delicacy and tilting their heads back to squeeze the lemon directly into their mouths. Craig tried another one with lemon and said it was much nicer. They were also eating some strange spiky roots which they peeled like a banana. Apparently the Purey is found all along the rocky shoreline here. We were very lucky to get the free ride back to Ancud where we cooked some risotto at our hostel and got an early night before venturing to some other areas of the island. 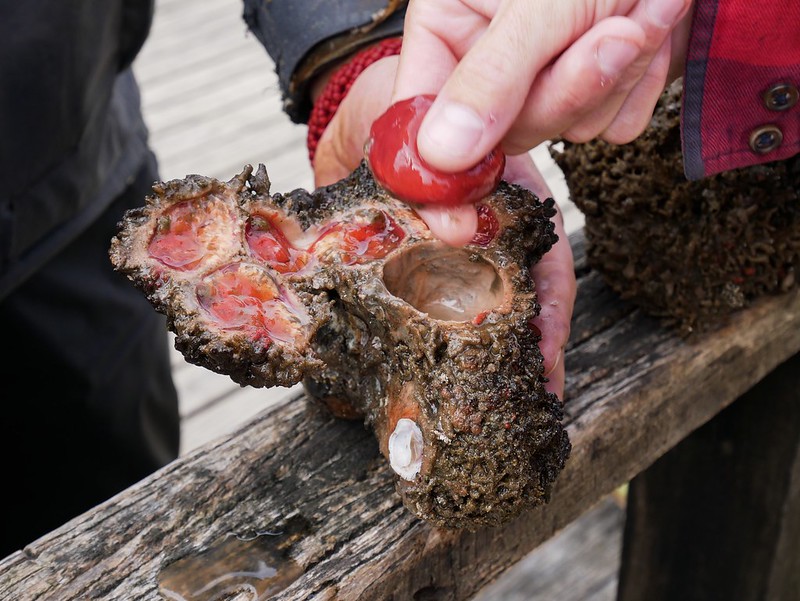 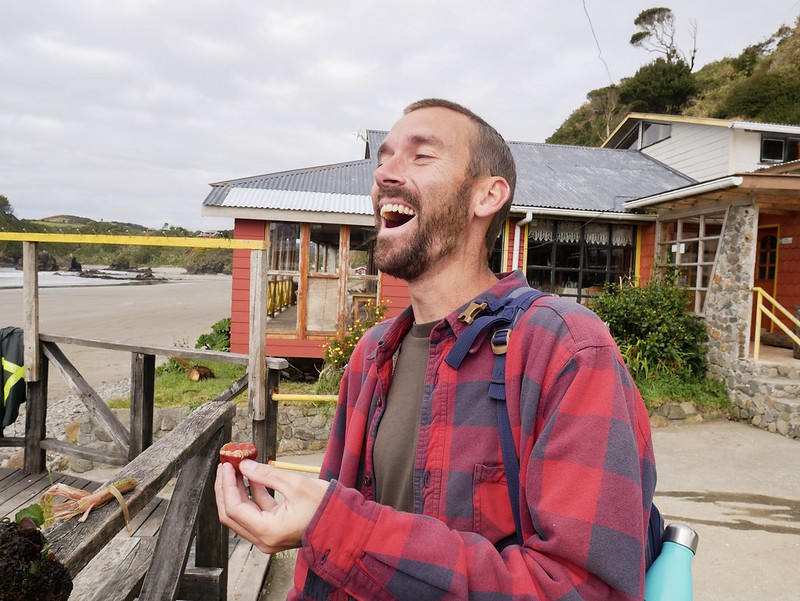 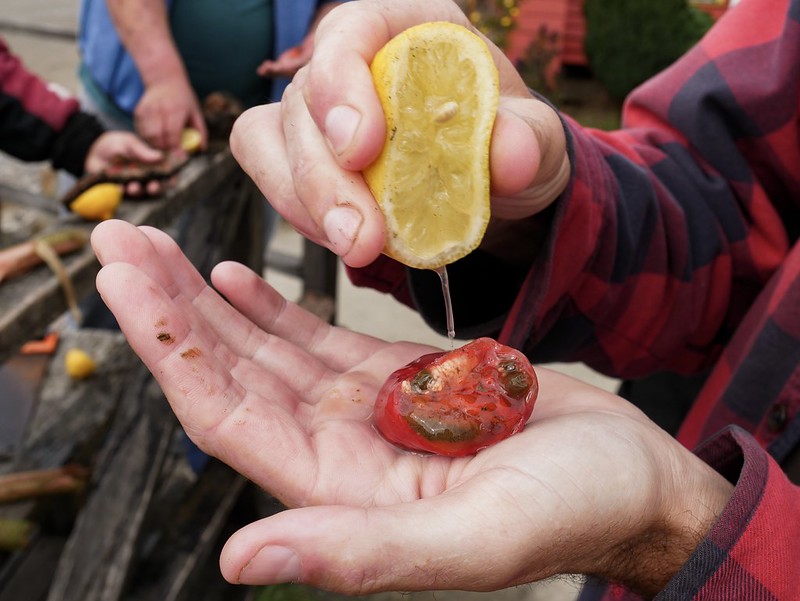