Our plan was to head south to Castro on a bus but as luck would have it an old Chilean couple staying at our hostel offered us a ride in their rental car. They were on holiday from Santiago but the man had family from the UK so he spoke perfect English. We awkwardly carried our giant backpacks outside, half expecting the couple to take back their offer and send us on a bus, but with a bit of a squeeze we got them in the boot. They said they wanted to see some sights along the way so we took a leisurely drive through the countryside. We passed some beautiful wooden churches on the drive, the island is famous for them and many are designated as UNESCO world heritage sites. 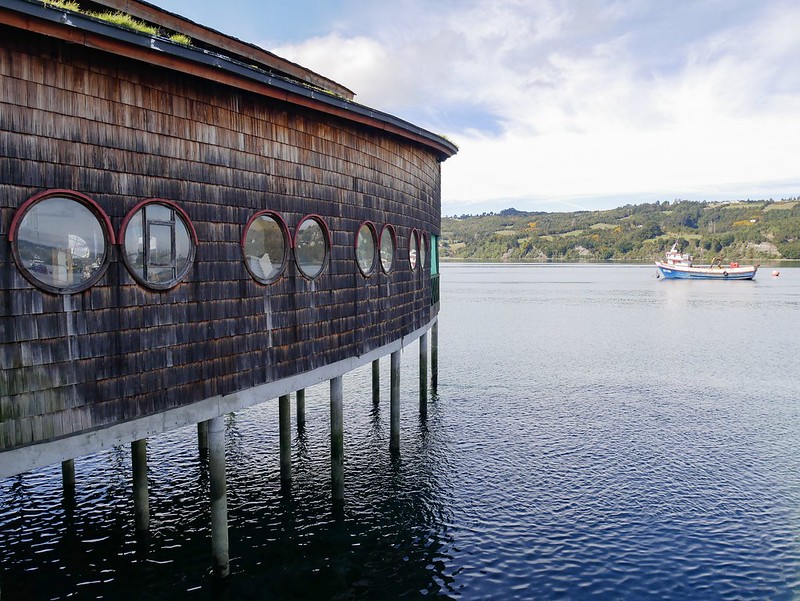 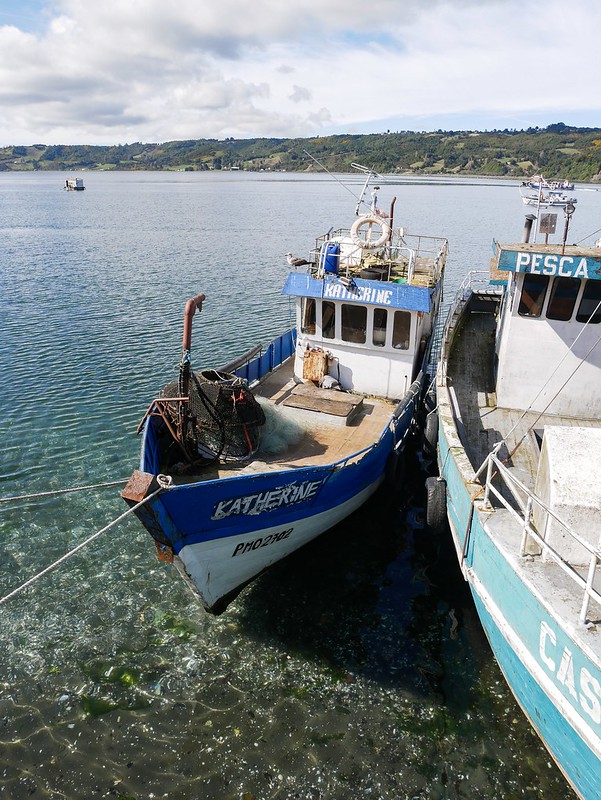 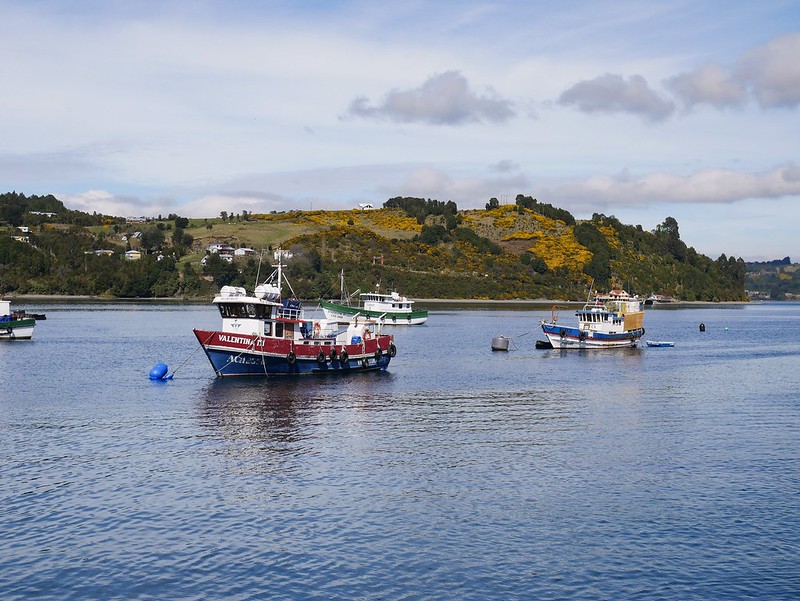 Our first stop was Dalcahue where we wandered around the coastal village and artisan markets while nibbling fresh empanadas filled with cheese. The area is famous for its oysters which the couple wanted to try but to get there we had to catch a ferry across to Curaco de Vélez on the island of Quinchao. The sea was beautifully clear and fishing boats bobbed in the water. A hilly drive led us to the tiny village which had a bright green church and hardly a soul around. Craig and I sat by the sea to eat some snacks while the couple had oysters but when we returned they still hadn’t eaten. Apparently the oysters were really overpriced, about 5x what they pay for one in Santiago so we shared our peanuts with them as I was worried they’d be very hungry. We didn’t arrive in Castro until the late afternoon and the lovely couple gave us a big hug and we bid them farewell. I sure hope they had a nice big supper! We checked into our hostel which had seen better days and it had a seriously slanted floor which almost made me feel travel sick when walking across the room. 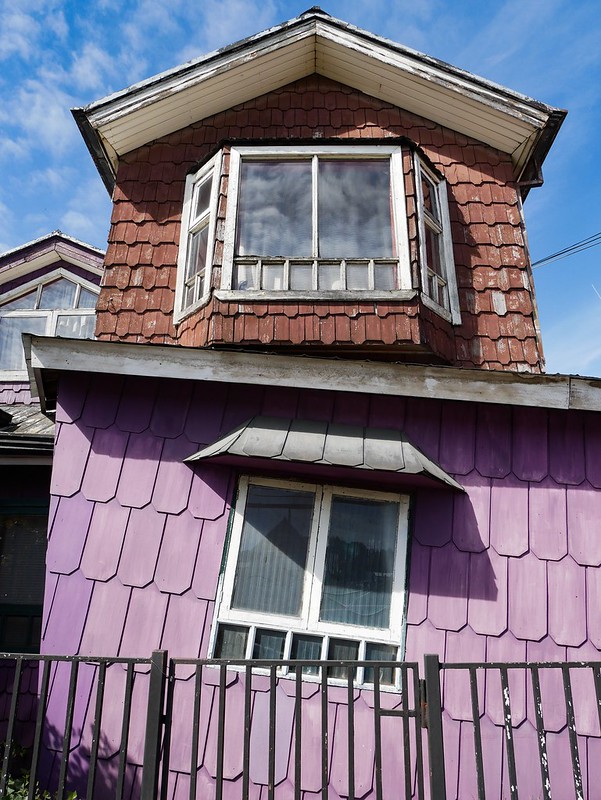 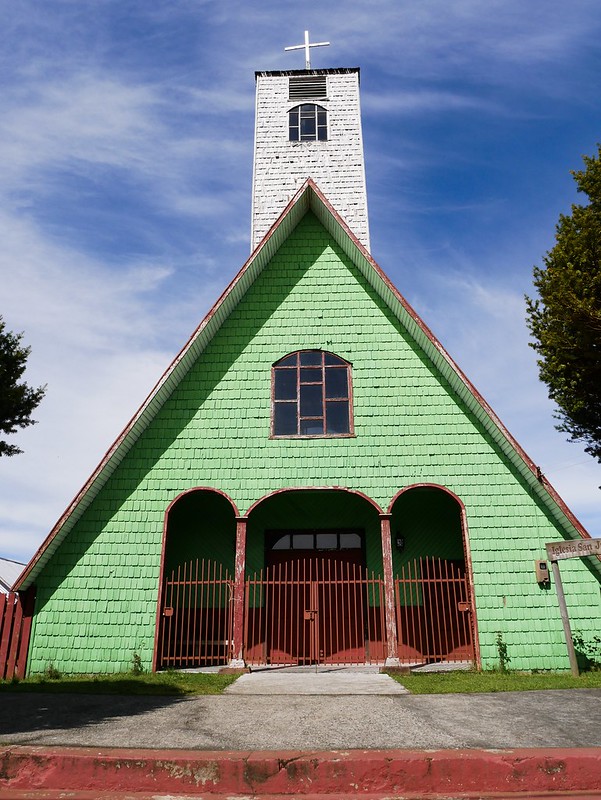 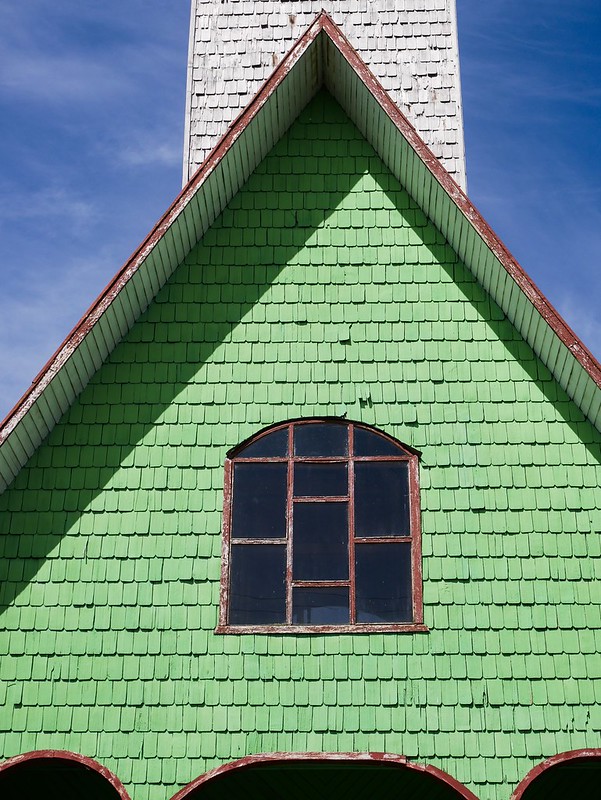 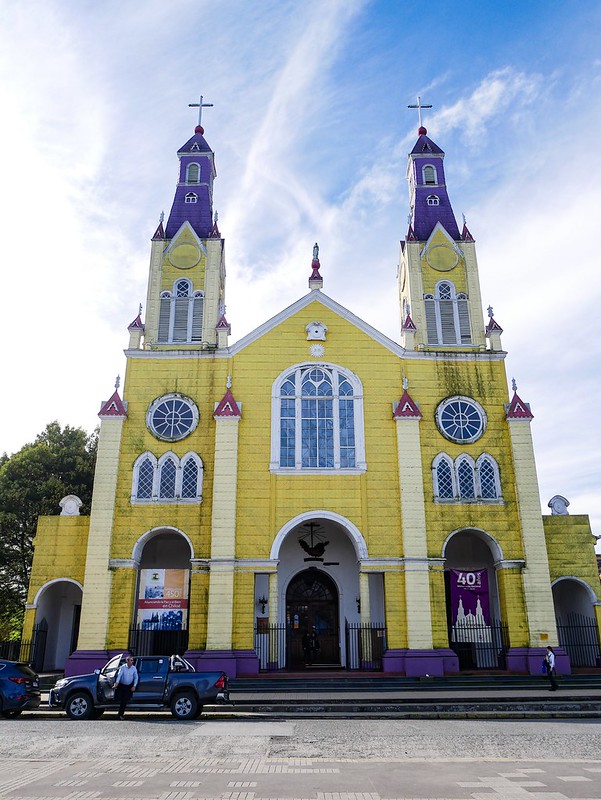 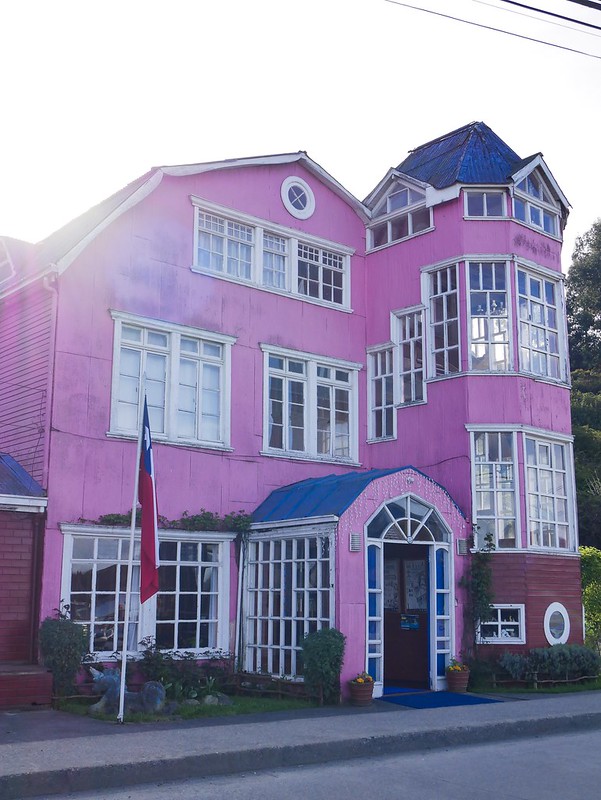 Castro is famous for its stunning lemon coloured church, standing tall with purple detailing. After we checked it out we took a stroll around the town to see the Palafito houses which line the coast. They’re the classic image for Chiloé island; built on stilts above the sea and all made of wood with tiny Swiss style wooden tiles painted in rainbow colours. I really loved the buildings, some were really rustic and weatherworn while others had been totally renovated to house boutique hotels. 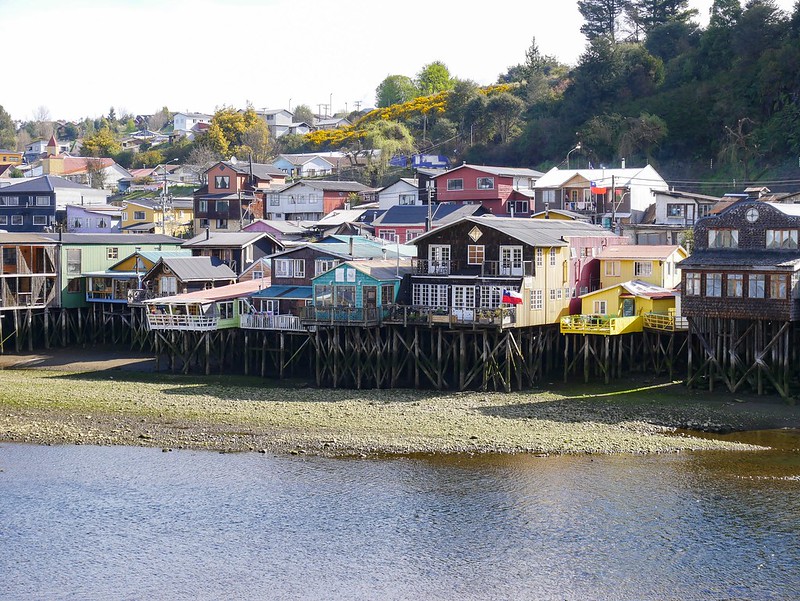 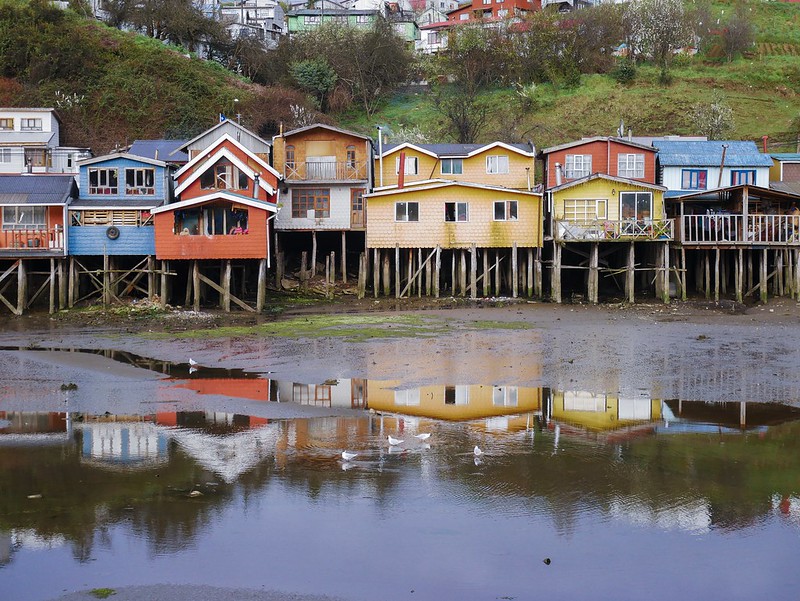 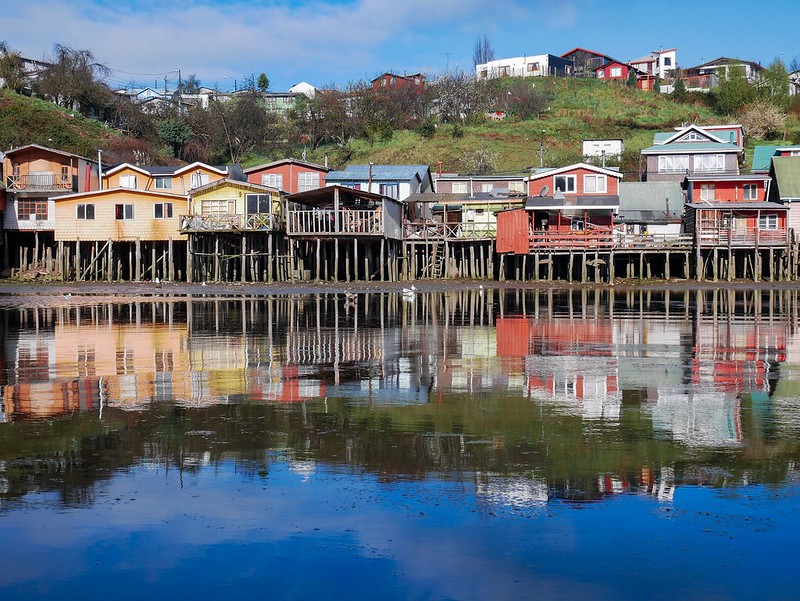 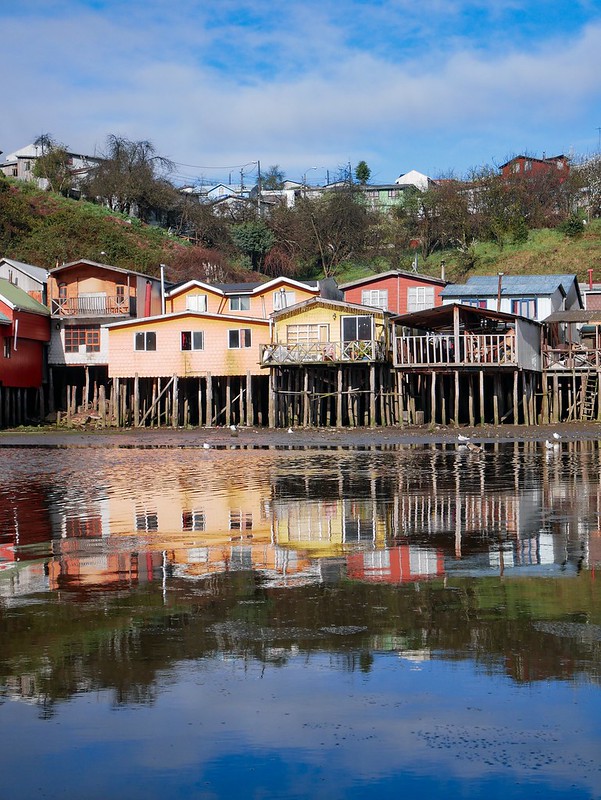 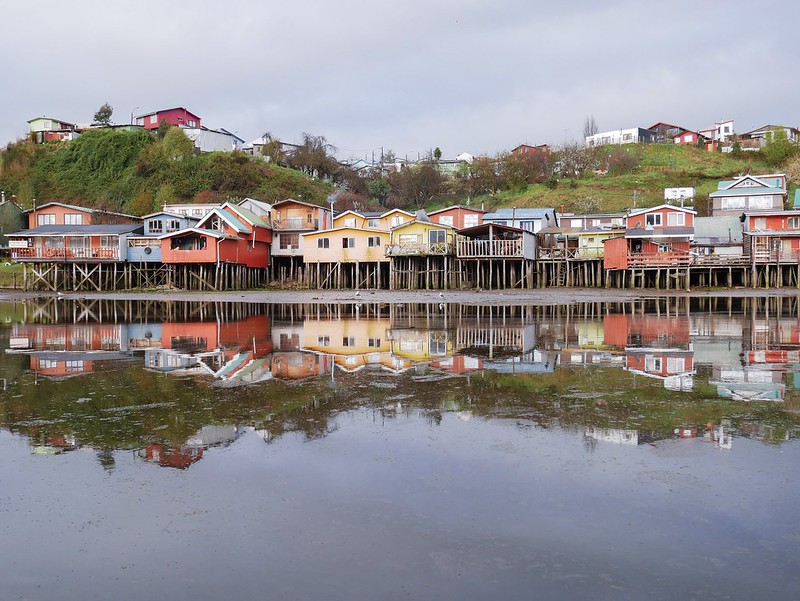 The following day we decided to head to Chiloé National Park. We got a ‘direct’ bus ticket which actually got us to a village called Chanquin where we were informed (in Spanish that was spoken like a tape player on fast forward) that we had an hour wait until the next bus to our main goal ‘Muelle de las Almas’. We were right at the park entrance though so we decided to take a little stroll. We ended up at the administration office where I asked in broken Spanish if we could buy an entrance ticket. I made it quite clear but after two tries the lady got me a free map and we figured we’d tried and were only spending 20 minutes in the park so we weren’t going to pay. I’m glad we didn’t as the sights were disappointing with an overgrown viewpoint and a distant view of an incredibly windswept beach enshrouded in sea mist. 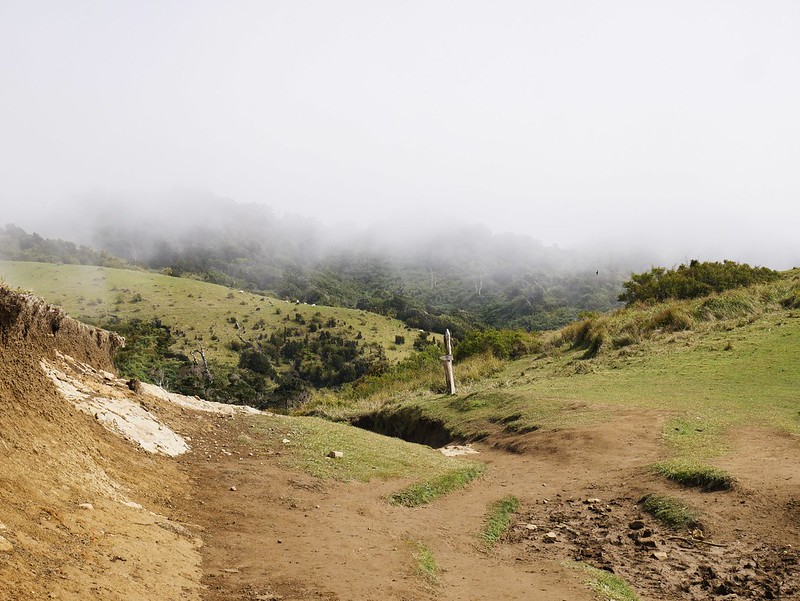 Finally we were on our next bus to Muelle de las Almas which actually sits on private property and involved a separate fee to visit. It was a 5km return walk through squidgy mud and eventually past rolling pastures and Pacific Ocean views. The name of the location translates to ‘The Dock Of Souls’ and it’s basically a wooden boardwalk made by a Chilean wood sculptor. The structure leads nowhere, just a short boardwalk that has a sheer drop down to the valley. It’s a place for the islands myth and folklore to run wild though and the locals believe this is the spot where wandering souls must come and call for passing boatmen to transport them to the afterlife or they will mourn in the area for eternity. 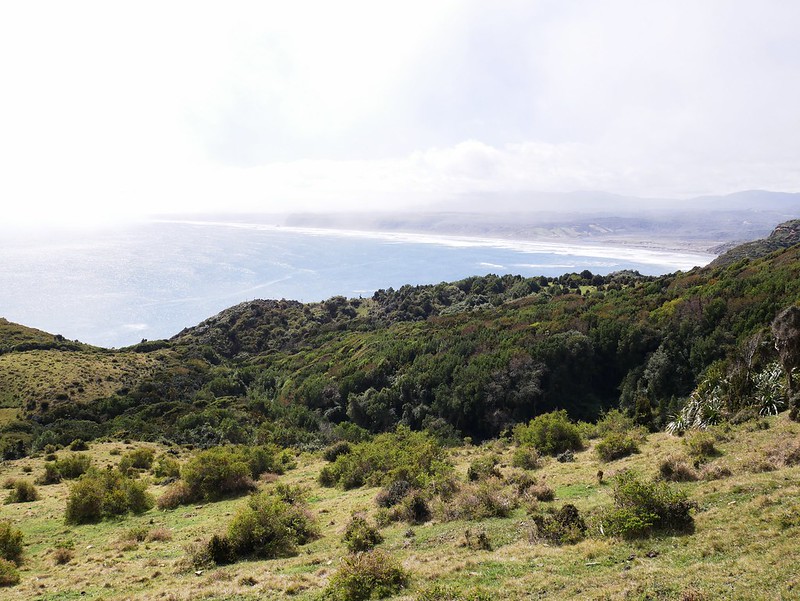 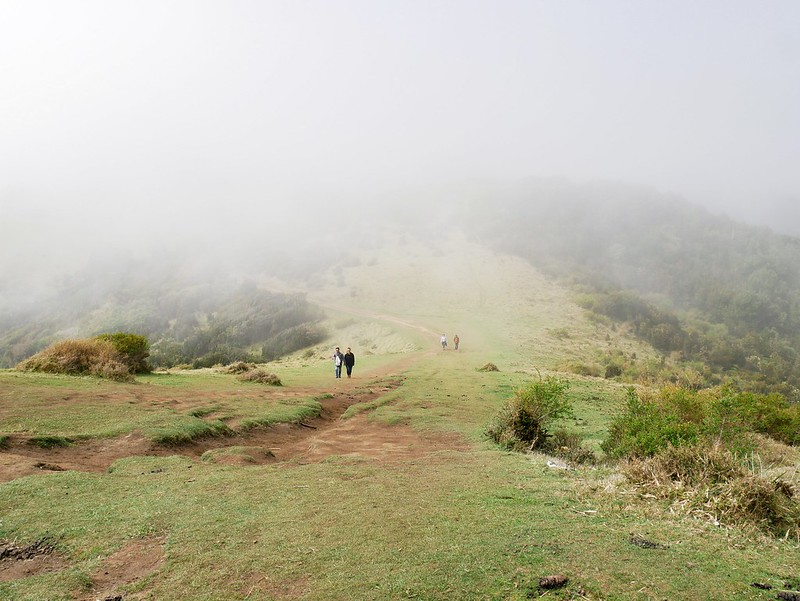 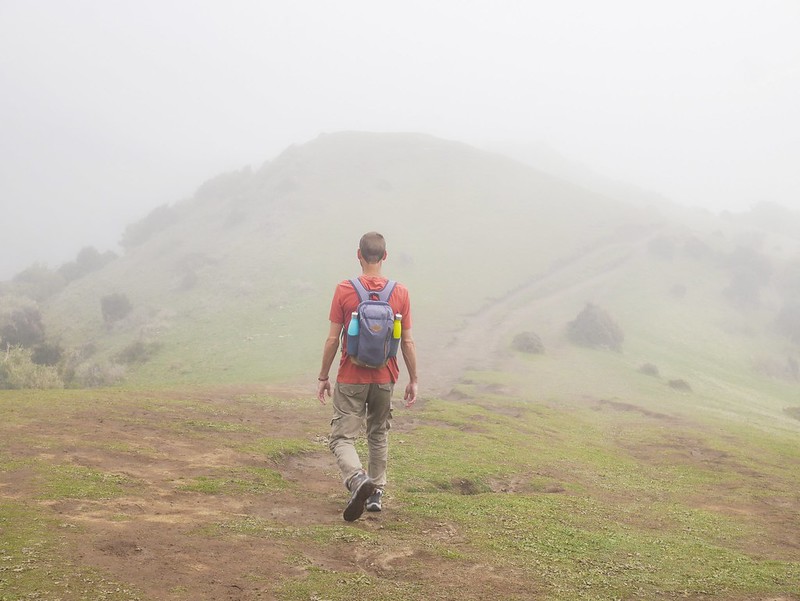 The area sure looked mystical when we arrived as fog drifted in from the coast like the steam from witches cauldron. We took some photos on the boardwalk and then veered off on a sheep trail to the cliff edge. We got an amazing view down to the blue sea and of islands covered in birds nests and lounging sea lions. The bus back stopped once again in Chanquin where we sat and waited for the next one, presuming it would be a quick transfer but we became sceptical when we spotted the driver under the bonnet with a wrench. Sticking with the theme of generosity on the island a couple who’d taken our photo at the coast came up to us and asked if we wanted a ride back to Castro in their rental car. Yes please! 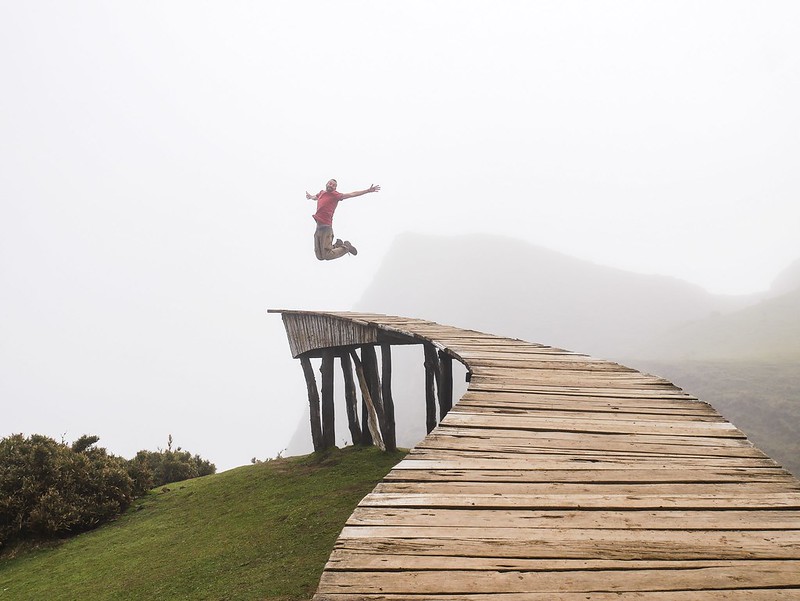 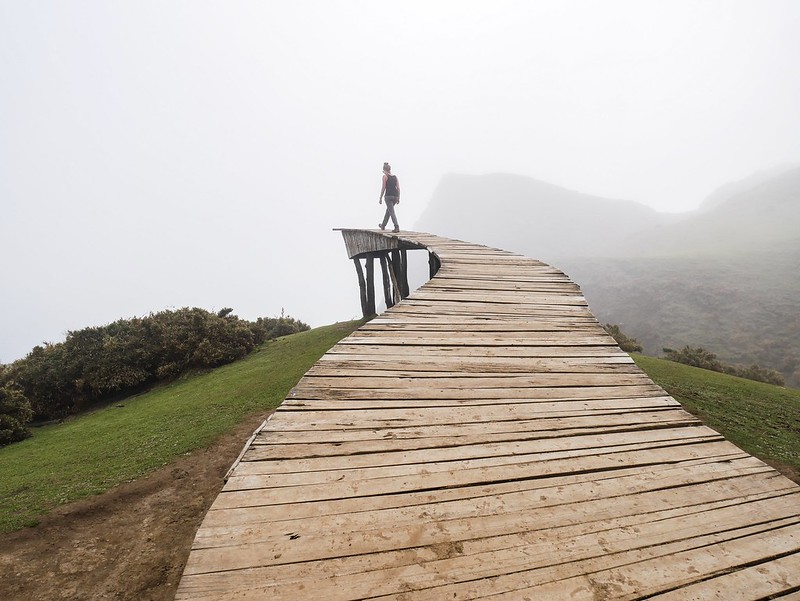 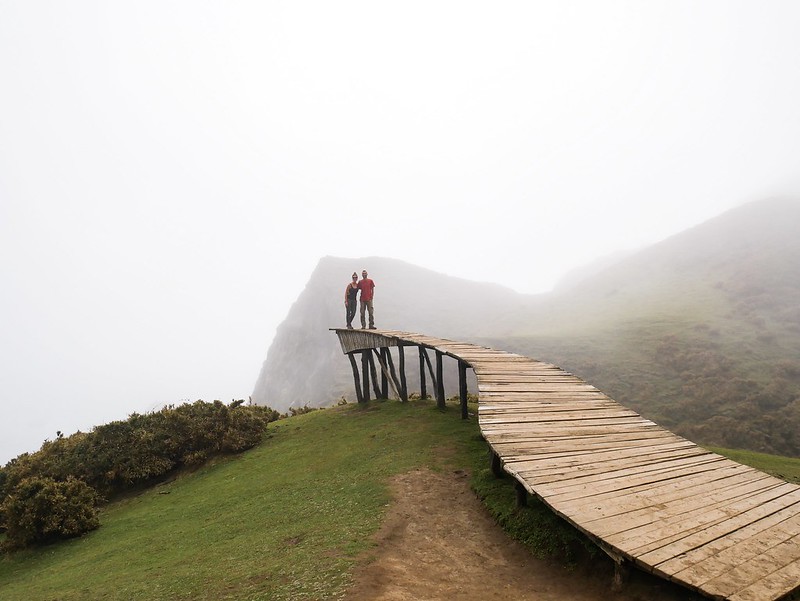 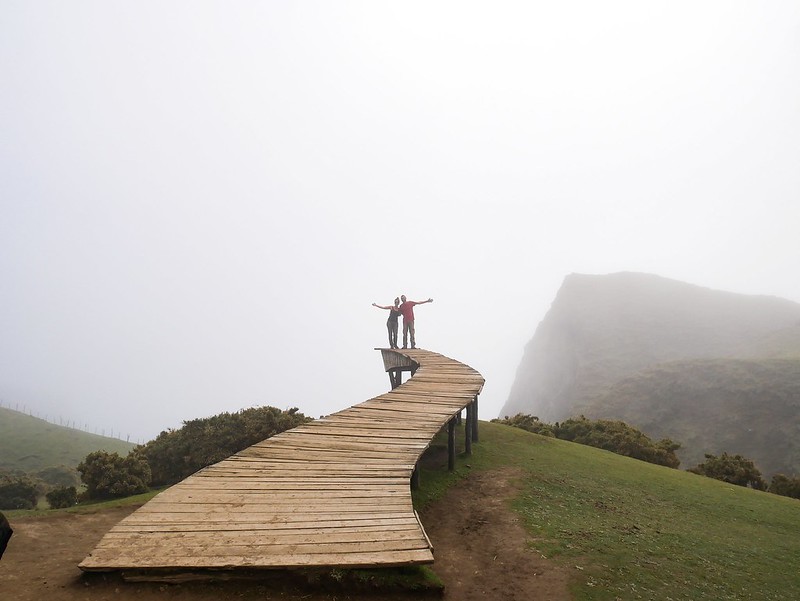 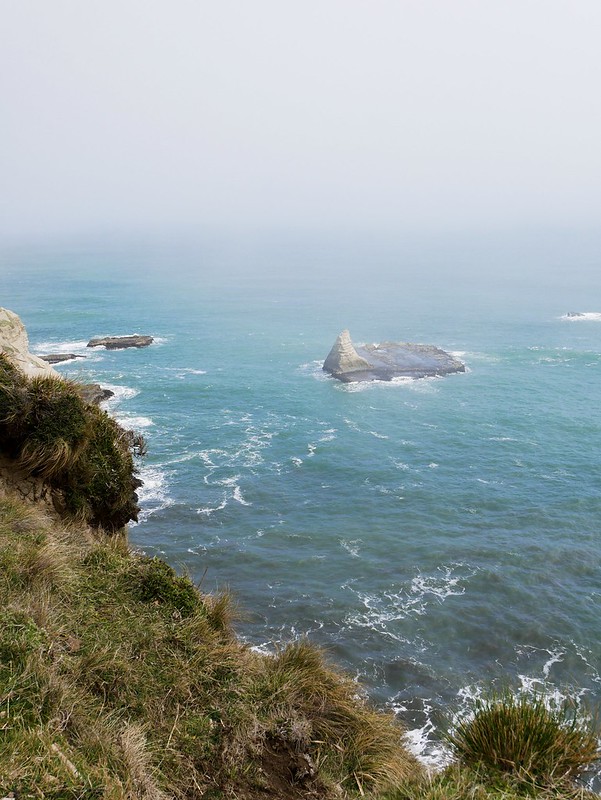 They were a lovely Canadian couple who we ended up having lots in common with, both sharing a love for travelling the world and wildlife. Before they took us back to Castro we took a spin along a ‘road’ which was actually just a vast Pacific beach and we were cruising along the sand. The beach ended at a river where a few locals were waiting in their cars for the tide to go down so they could cross the river and reach their village. What a crazy place to live! 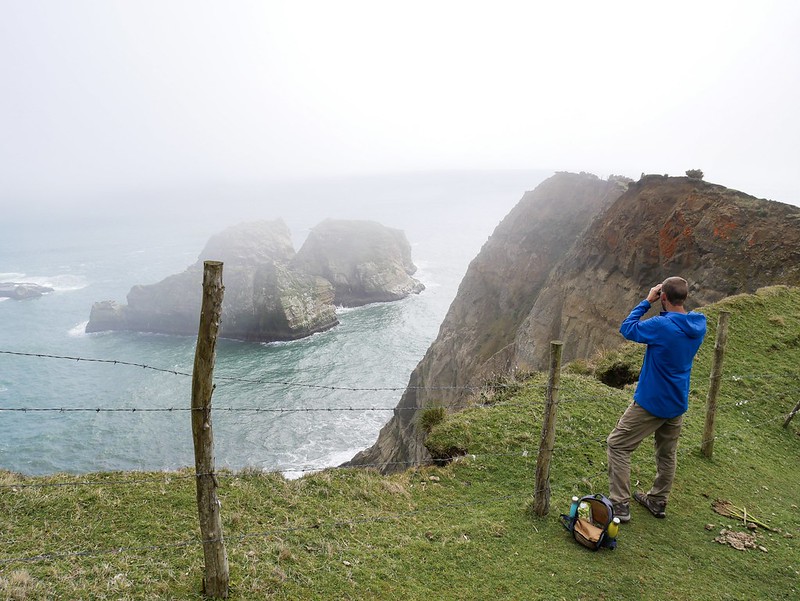 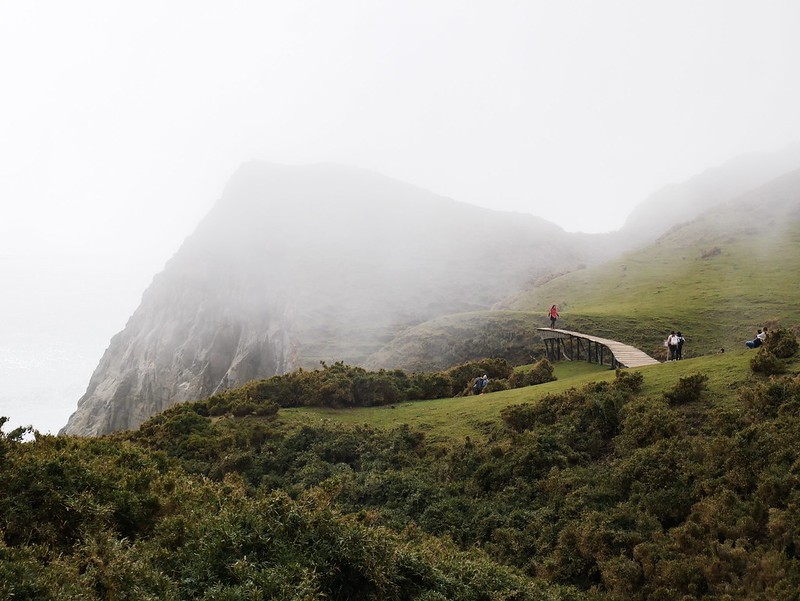 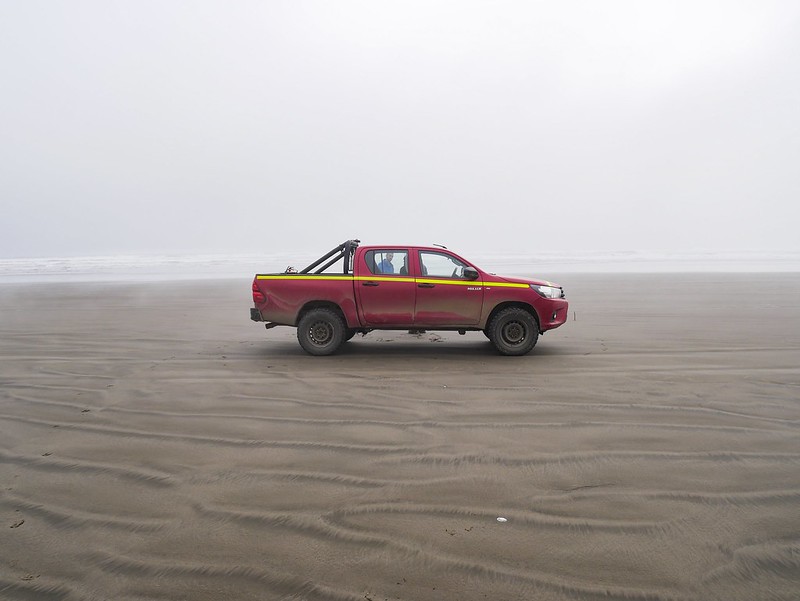 After a few lovely days meetings great people around the Island it was time for us to head back to the mainland in anticipation of three days of relentless rain. While on the ferry back we unknowingly experienced a 6.1 magnitude earthquake. When we arrived back at our beloved hostel in Puerto Varas a few people said they’d felt it. Apparently that sort of magnitude could easily flatten a village in Italy but these wooden houses in Chile deal with quakes very well, which was a relief! 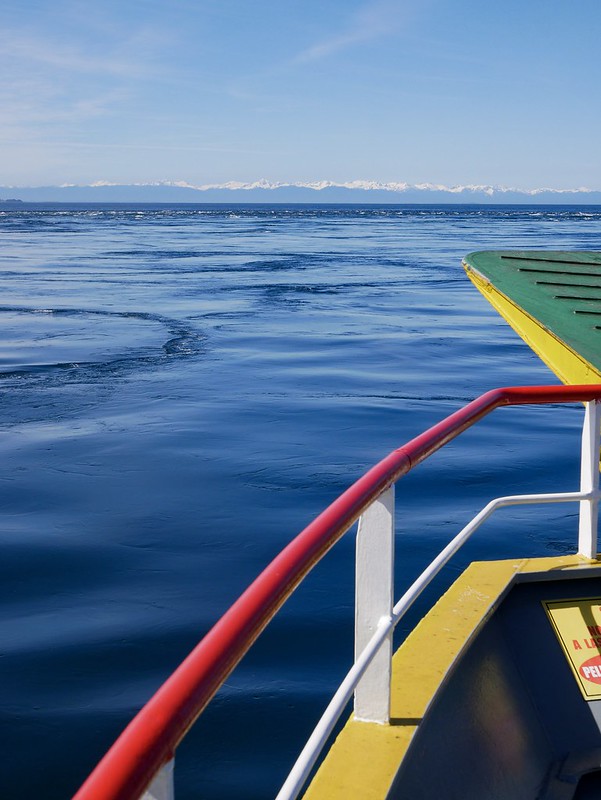