Sedona has become a really popular destination in Arizona and it’s set up for tourists with plenty of souvenir shops and Wild West style bars, but it’s the surroundings that draw people here. The town sits in a lush green valley surrounded by red rock formations. The buildings even match the scenery with adobe houses and cacti covered gardens.

We arrived late in the afternoon so we enquired at the visitor centre about free camping. We were sent up a popular dirt road in the national forest but were warned to take the right road and not the left. The jolly lady said there used to be a sweat lodge down that road but people died from the untraditional methods used on the clients. It sounded like a very creepy place and we were wondering if she was warning us about ghosts but then she explained that some people never left. Apparently they’re high on drugs, so high that one guy jumped in front of her as she was driving down the road just a few weeks back. The area is known for its vortexes which we don’t really understand but apparently it’s to do with natural forces of energy that have healing powers – so that’s brought along a mix of hippies and health gurus offering palm readings and such so maybe people went a little loopy on the spirituality and drug-wagon. 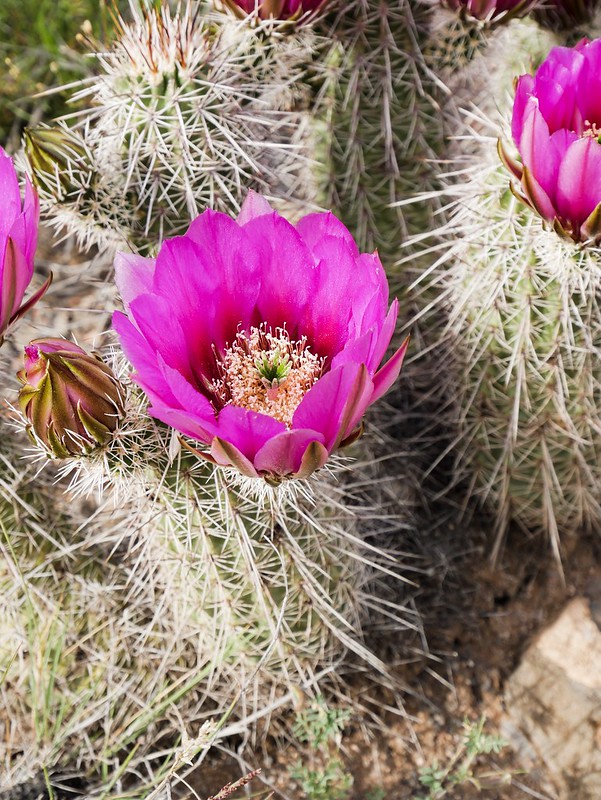 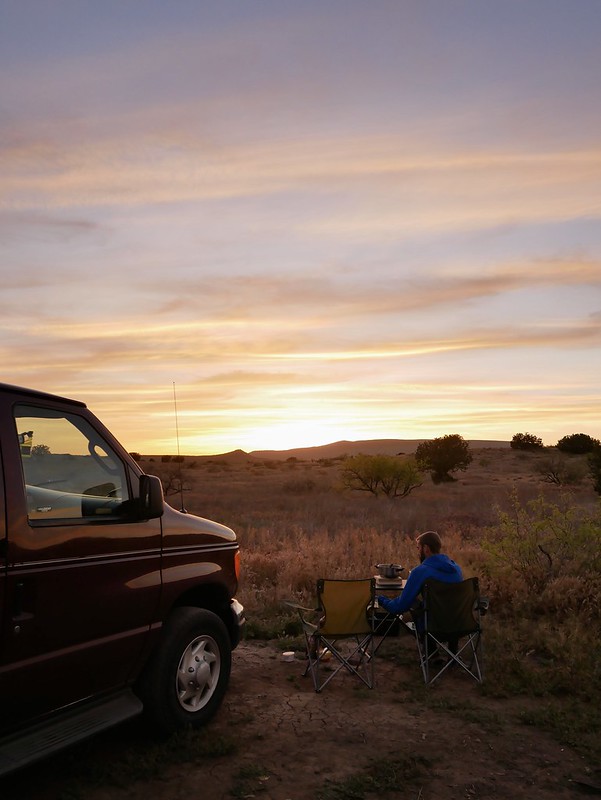 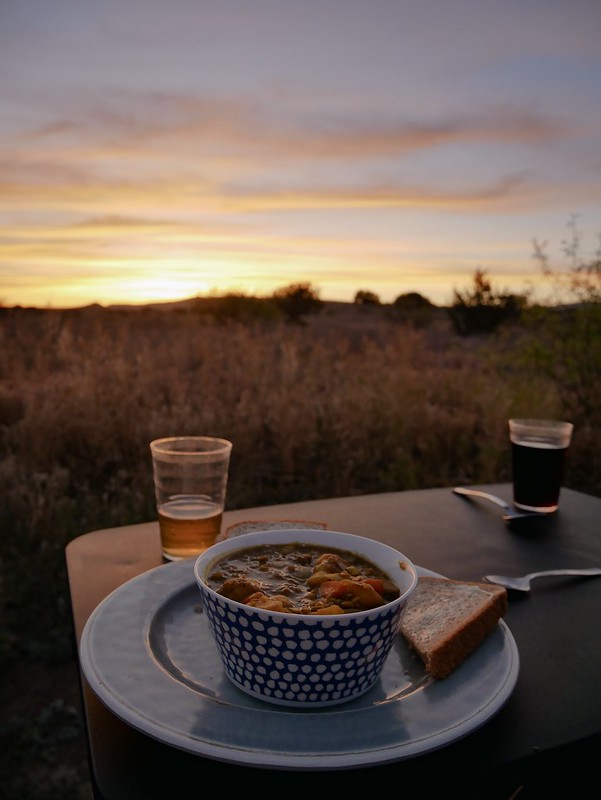 We managed to find a nice camp spot on the safer side and enjoyed the warm evening with an al fresco dinner and a wonderful sunset. We woke to more sunshine and hot weather so we set off early to hike up cathedral rock. It’s one of the more popular hikes around Sedona so we hadn’t anticipated it being such a challenging route up. It was totally manageable though and we were basically led up red sandstone rocks and along steep gullies. At the top was a sort of pass between two rock formations with amazing red rock pinnacles. The view was worth the sweat and we had sheer walls around us and the lush green forest below. 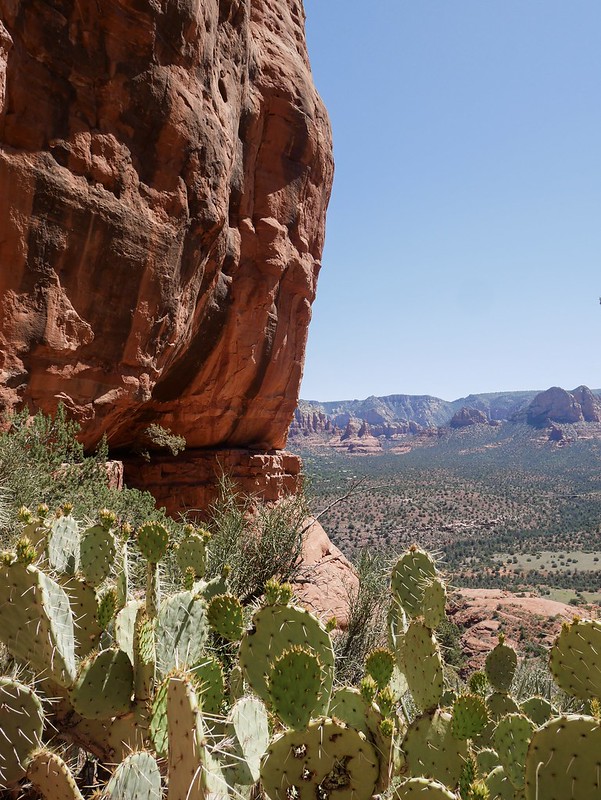 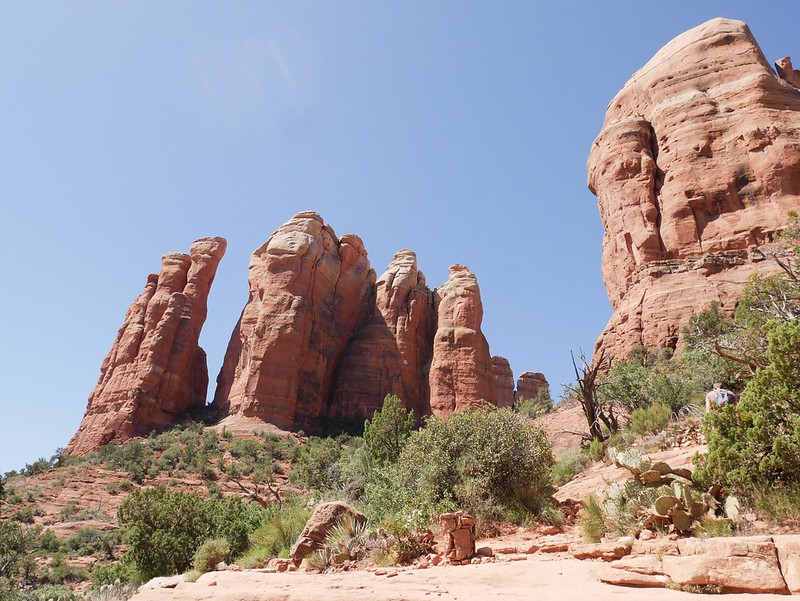 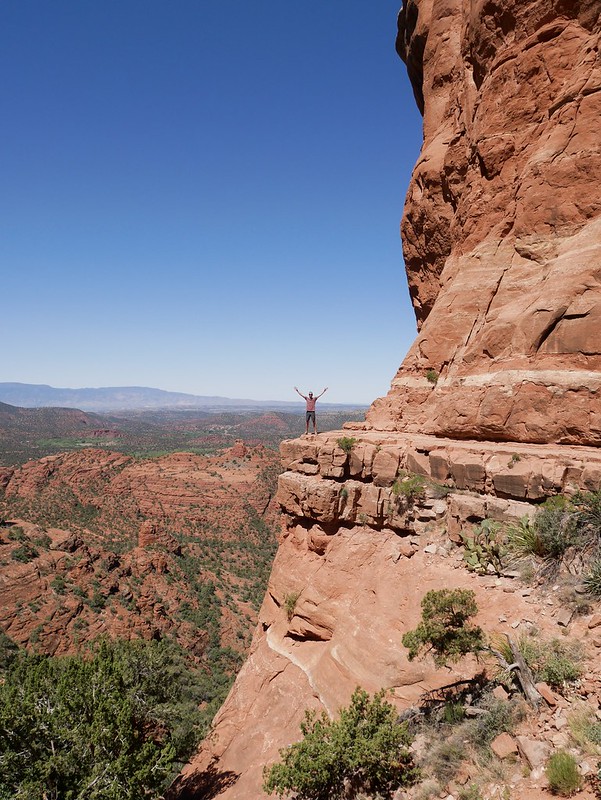 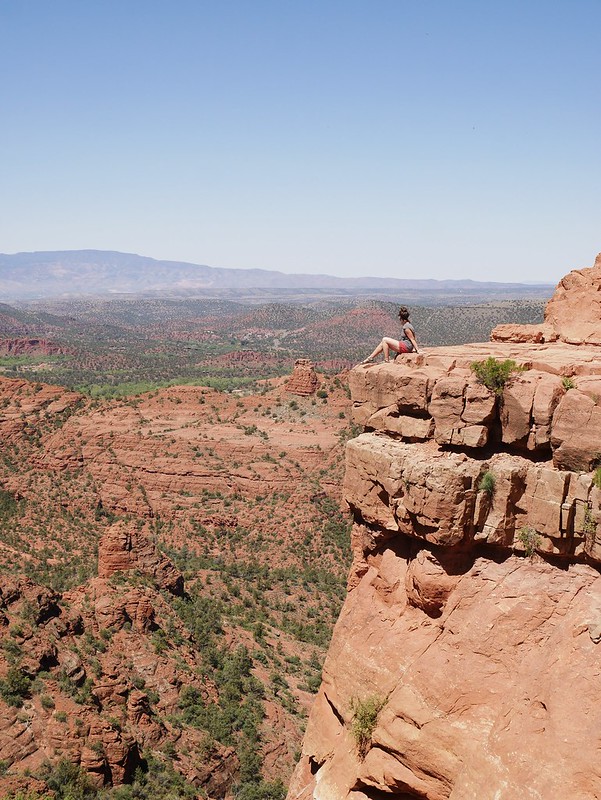 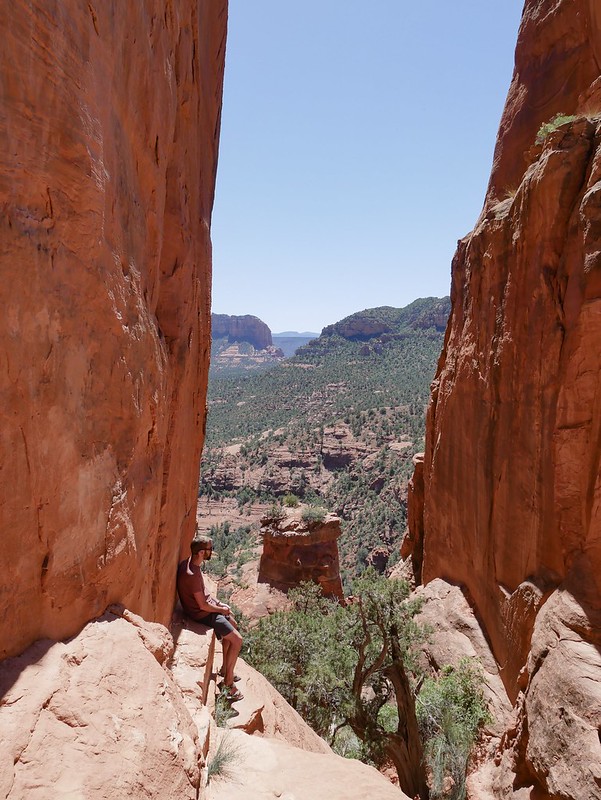 On the way back we wandered along the shores of Oak Creek where the water was mesmerising. Sometimes it was shallow and rolling over rocks but then it would fill into a deep crystal clear pool. It looked so inviting that we headed back to Ruby and grabbed our camp chairs and a couple of beers so we could have a little beach time. The water was cold but enjoyable on the scorching hot day so we dipped in the water and baked in the sun all afternoon. 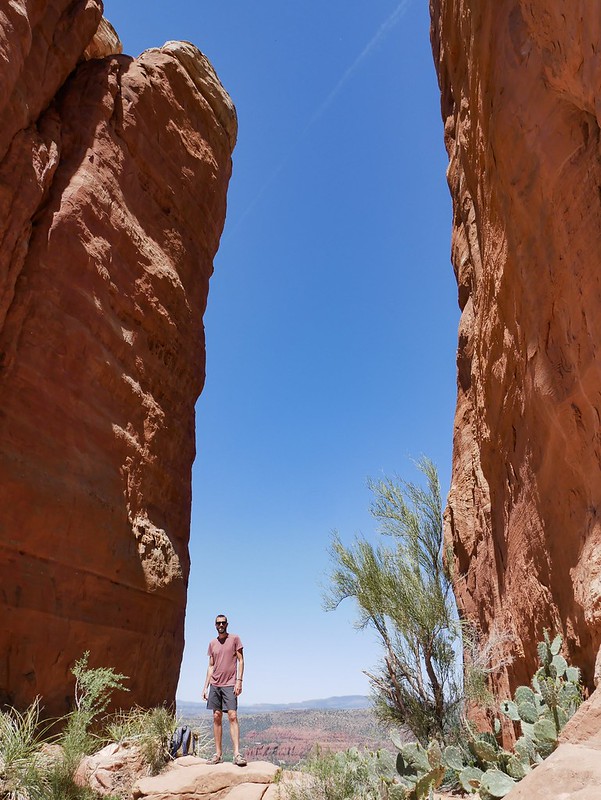 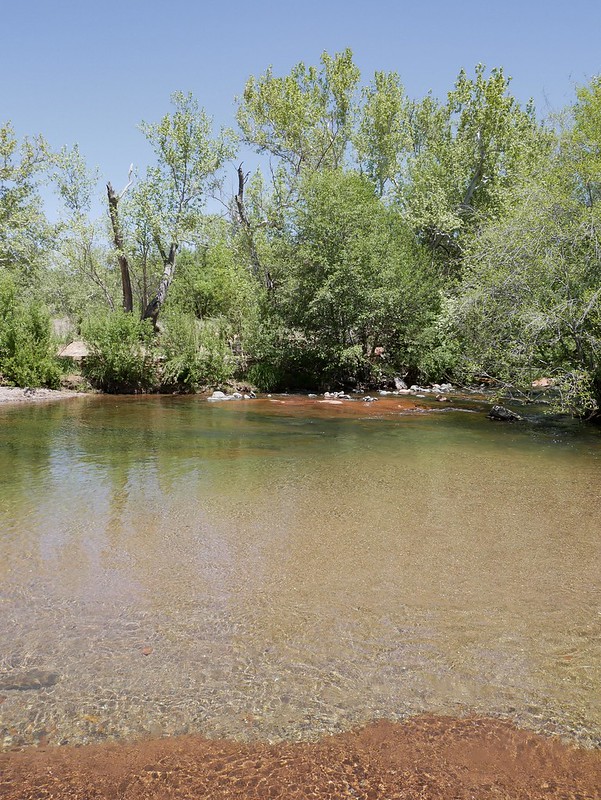 We camped in the same area but I was awoken at sunrise by what I thought was Craig breathing really loudly. It was driving me mad but then I realised it was too inconsistent, he’d be silent and then do a big deep breath and I thought maybe he had sleep apnoea, but then I realised it also sounded remarkably similar to a hot air balloon. Low and behold I opened the curtain to find an inflated hot air-balloon right outside and preparing for take off. We sleepily got up and headed into Sedona for the Cinco De Mayo celebration. It was really aimed at families and kids so apart from a bit of nice music there wasn’t much else to see. They did have a chilli competition, said to be the towns most exciting event of the year with unlimited tasters, but it wasn’t appealing for a vegetarian so that didn’t help us stick around. It was a shame really as we left at around 1pm and it was scorching hot so we couldn’t bare the idea of a hike afterwards and just hit the road. 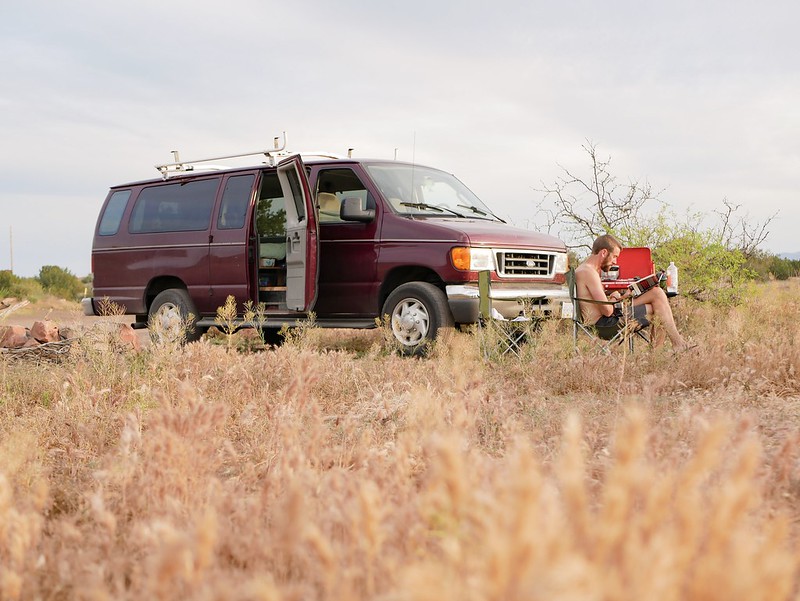 Soon enough we came to another crossroads on our big roadtrip where we had to decide which route to take. Our original plan was to get to Big Bend National Park in Texas and then head back north but it didn’t take us long to realise it was too ambitious for a three month trip (unless you love driving all the time – which Craig doesn’t). It was also unbearably hot and the idea of continuing south wasn’t very appealing. There’s no trees in the desert so it’s impossible to escape the sun which heats our van up like a slow cookin’ stew. There were a few pluses to going south like enjoying the evenings outside in the warmth but the big downside was hiking in suffocating heat.

So inevitably we decided to skip Texas, which I was pretty gutted about but it would of been a 1500km detour for one national park, it just seemed a bit crazy really. Although I really wanted to see all the Texas cowboys. We also had to do some thinking about New Mexico and decided it was better to just see the north of the state. Again I was disappointed we couldn’t go to White Sands National Monument but it was also another big detour with very little to see on the way and we prefer to drive less and see more.

There was one thing I refused to miss out on though and that was seeing a Saguaro cacti. They are quite remarkable, living up to 200 years and growing 50ft tall but in their first 8 years of life they only grow 1.5cm. They are the classic image of a cartoon cacti if you asked someone to draw one – tall with an arm on either side. In fact they don’t grow arms until they’re over 75 years of age and then they can grow an endless amount. I was fascinated by them before even witnessing one so I googled where to find them. They live in very hot deserts from California to Arizona between sea level and 4000ft elevation. I read as soon as we reached Black Canyon City they’d be everywhere so it involved a detour south but I told Craig it would be worth it. 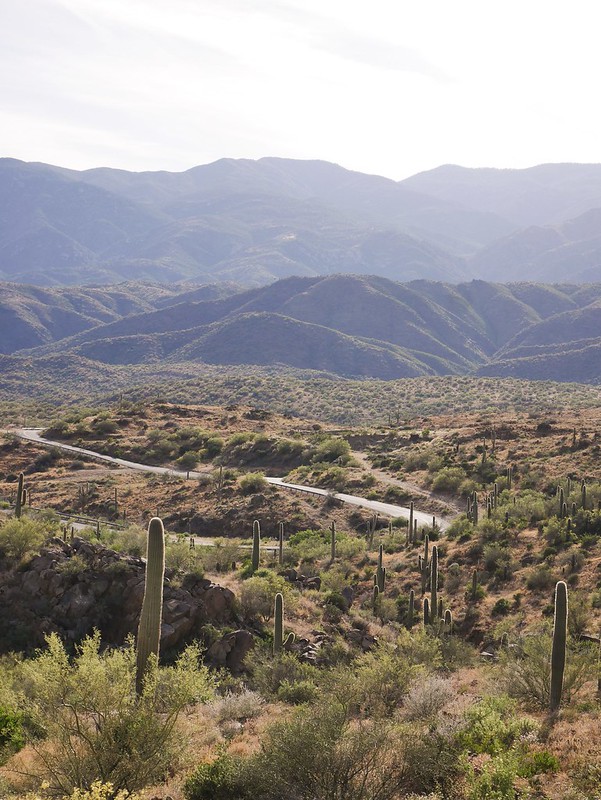 We followed the main highway south and then we got to a point where we were told the Saguaros would begin. They weren’t there and I could tell Craig wasn’t too happy about the detour. Thankfully the road began descending down into prime Saguaro habitat and Craig spotted a couple up on a hilltop. I was squealing with excitement as the hills quickly became covered in the beautiful cacti. We took a random exit that led us into a green valley dotted with Saguaros and pulled over to check them out. 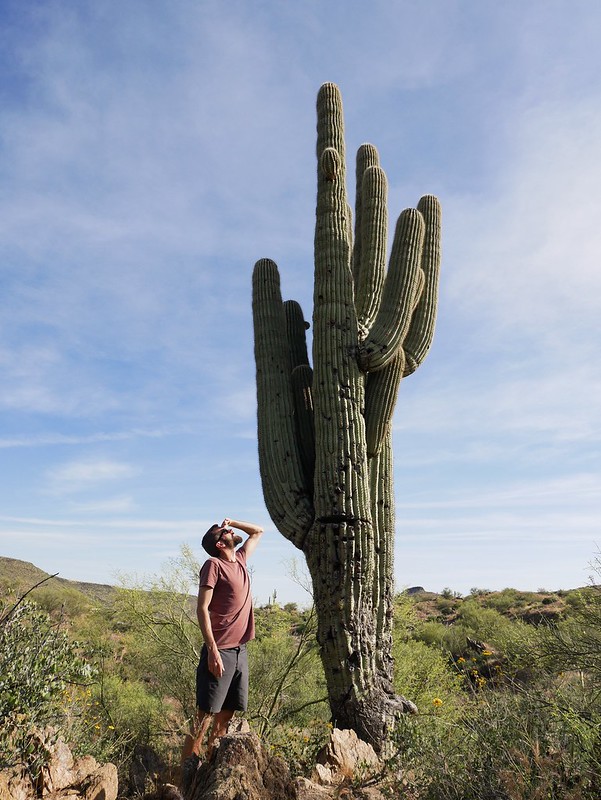 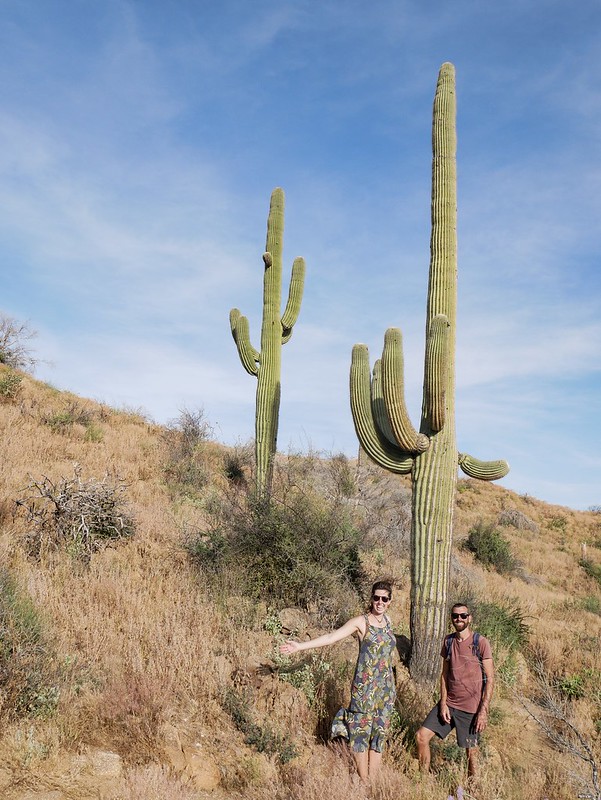 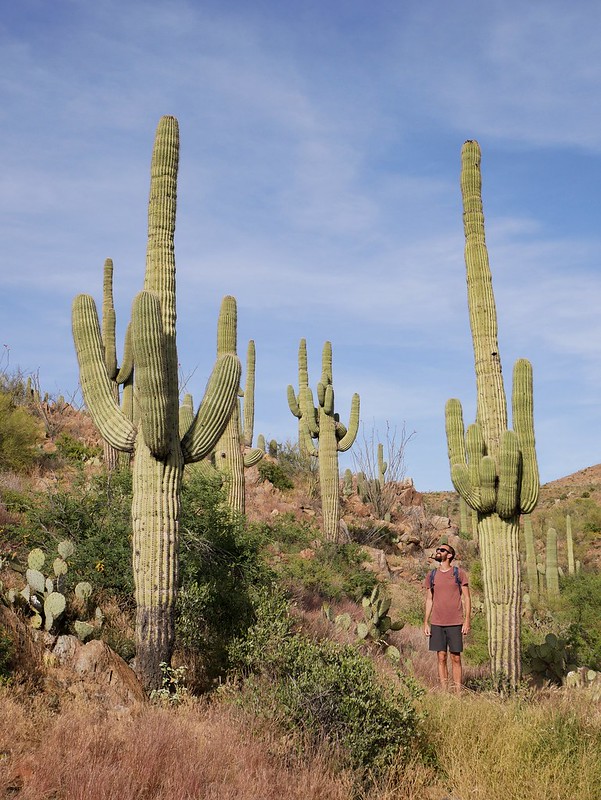 We spent an hour walking amongst the giants which towered high above us. Craig wobbled on the trail at one point and instinctively went to grab the closest thing to him which was a Saguaro with two inch long spikes all over it. Thankfully a split second before he touched it he realised where his hand was going and moved away. 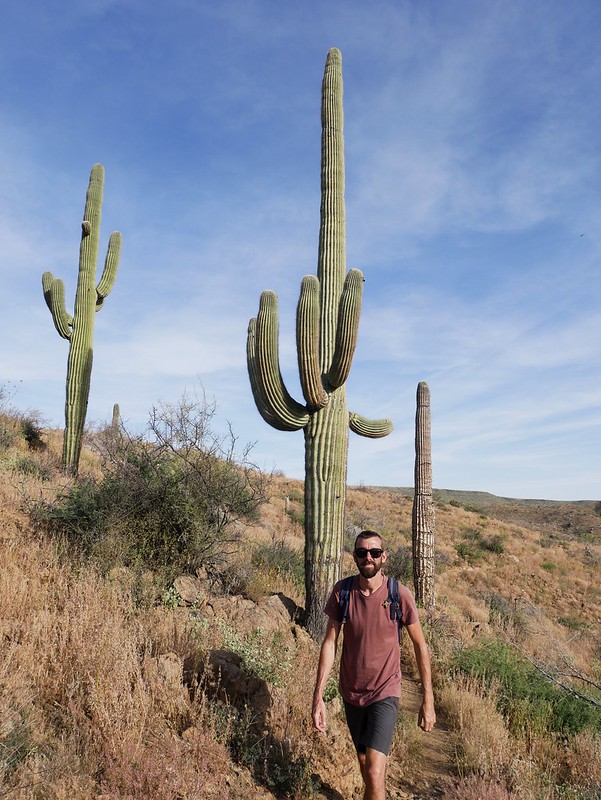 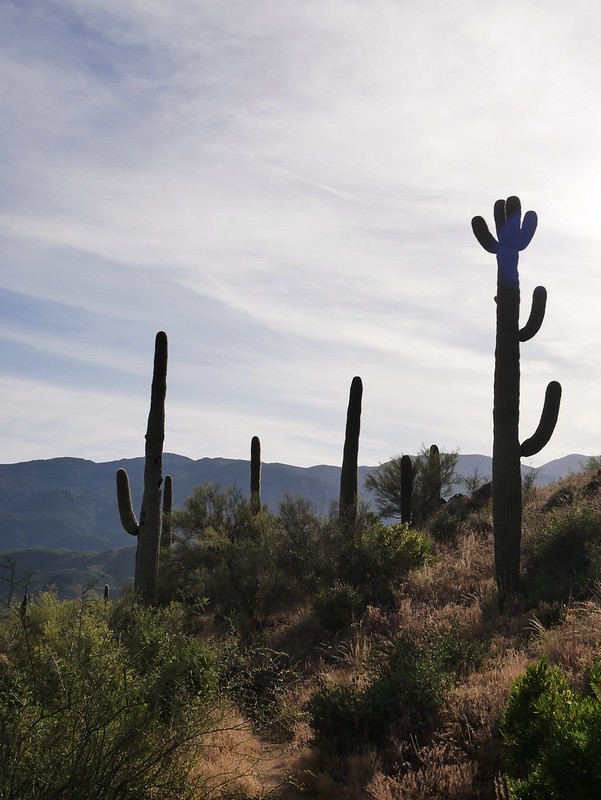 As we walked down a dirt track I said to Craig how strange it was that we hadn’t seen any snakes in the desert. We couldn’t believe our eyes as I suddenly saw one was right in front of us! He slithered quickly across the track and into the shrubbery, what are the chances of that ay? It makes me wonder how a snake can have such soft, delicate skin yet manage to slither over sharp terrain. 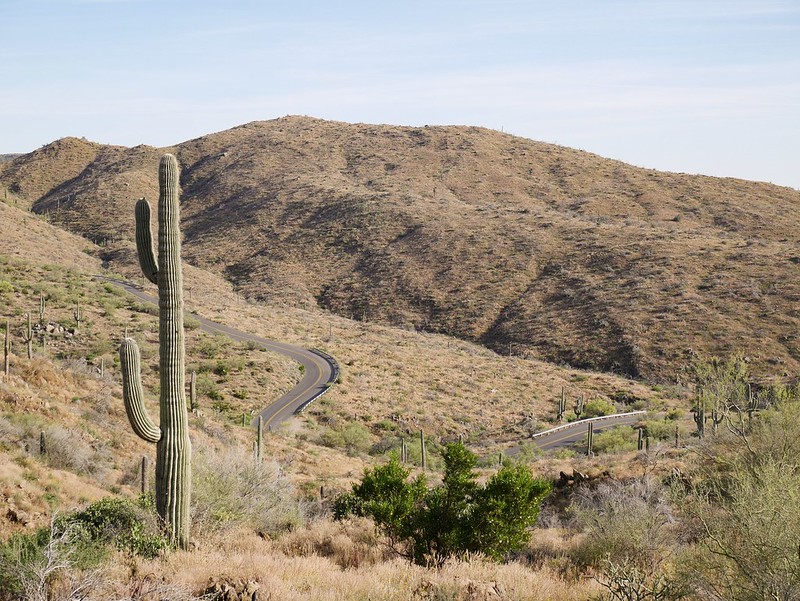 We decided the area was so nice that we would camp in a pullout. It was a really quiet area with just a few cars pulling dirt buggies to some nearby tracks. We had a refreshing solar shower off the side of the van while our dinner was cooking on the stove beside us and then we ate outside with head torches on. It was great until our torches attracted all of the moths in the area and that’s pretty scary when they fly directly into your face. 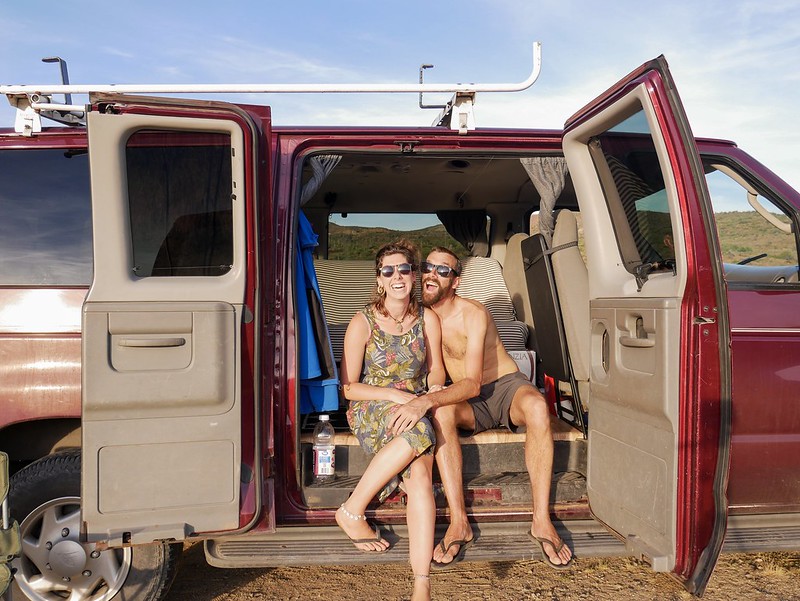 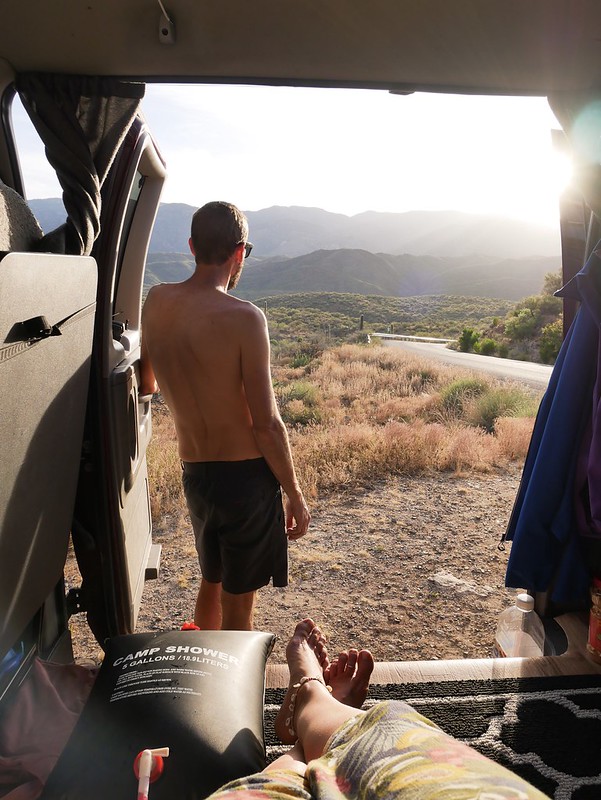 We had a wonderful time seeing the impressive cacti but now it’s time to head north, to the Route 66 we go! 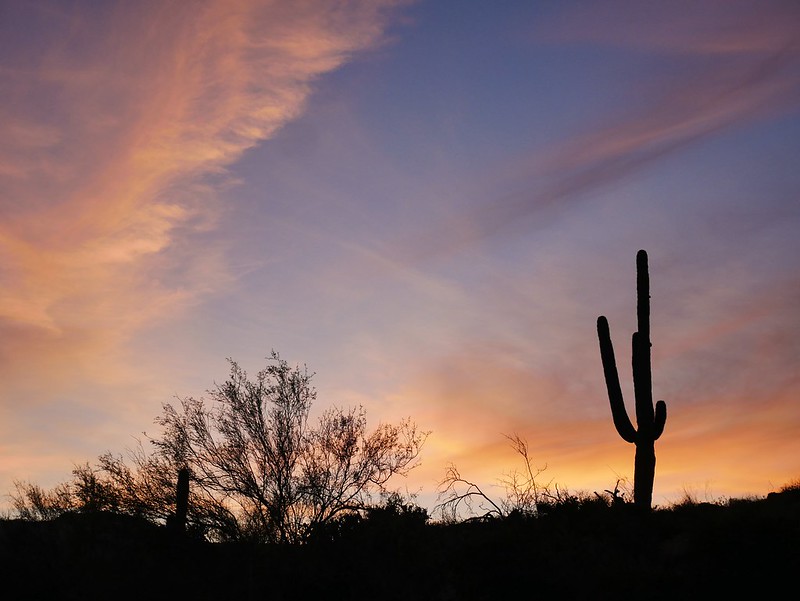