There was a little town on the map that caught my eye and resulted in a detour to reach it. The town was called Winslow and it sat along the historic Route 66 in Arizona. My surname is Winslow-Llewellyn (thanks to my parents being indecisive and giving me both their surnames and not thinking about how damn long it takes me to sign documents) so that’s what drew us to the area. Not only that but Winslow became pretty famous thanks to the song ‘Take it easy’ by The Eagles so we wasted no time in heading to the little town and repeatedly singing the only part of the song we knew “Standin’ on a corner in Winslow Arizona la la la laaaa…”. 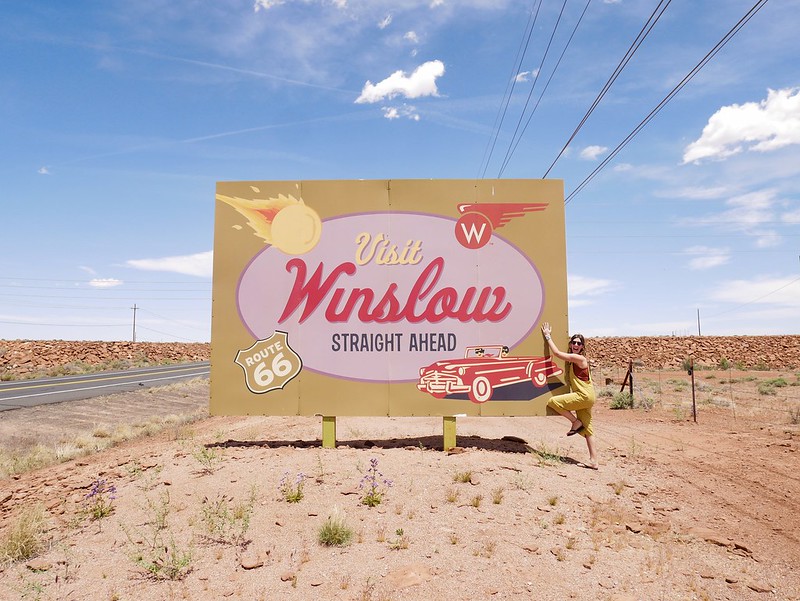 We stopped at all of the inviting welcome signs to the town and had a giggle at the ‘Entering Winslow’ sign. Apparently the town had to repair the historic highway but they actually dug up and relaid the original Route 66 tarmac to keep it as authentic as possible. We pulled up on the main road and I declared that the town looked like a bit of a shithole. It was really rough on the edges with plenty of abandoned buildings but they did put some love into a couple of blocks. There was a nice old time vibe with vintage signs and classic cars. At the main crossroads a huge Route 66 highway symbol had been printed onto the road. On the corner was a tall brick wall with a mural across it and a red ford depicting the lines of the song “….it’s a girl my lord in a flatbed Ford, slowin’ down to take a look at me.” 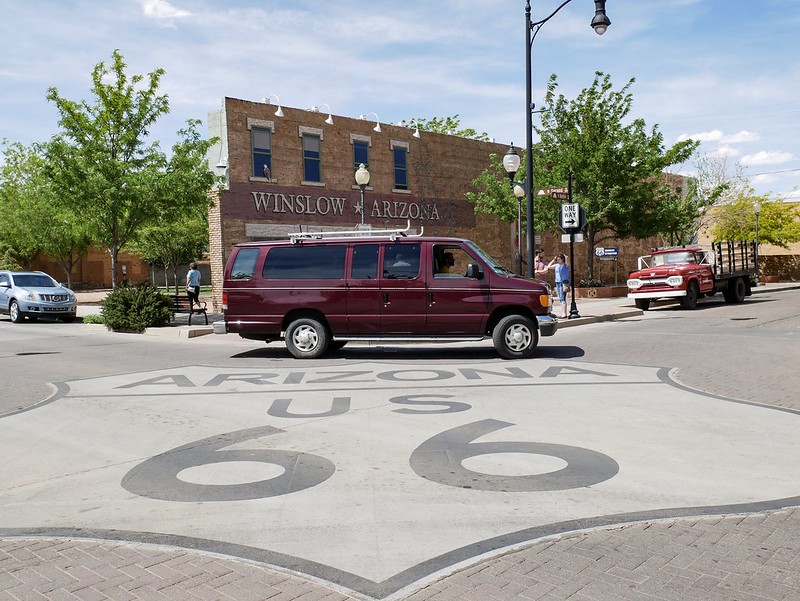 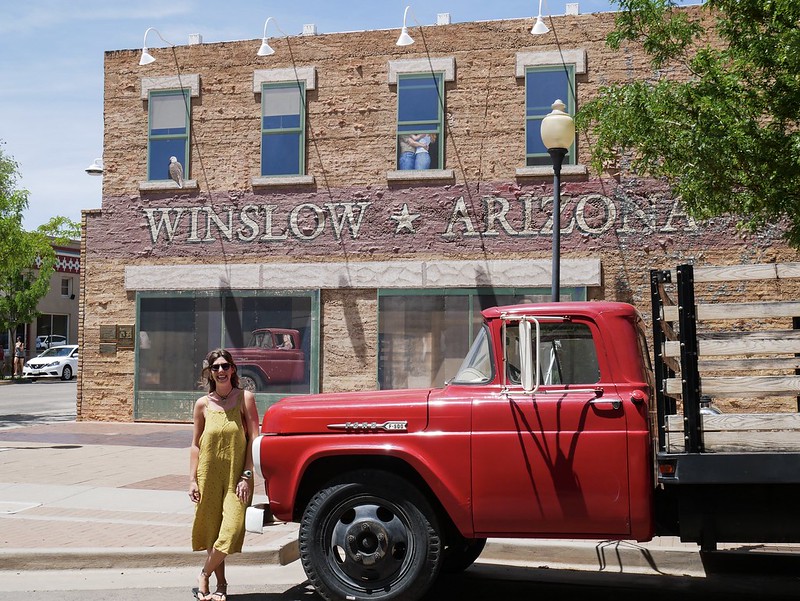 It was still the Cinco De Mayo celebrations and a funky looking eatery with Cadillac bonnets stuck onto the wall of the bar had some good offers on. It was a cute place but our waitress was so fake and rude it just made us uncomfortable. I felt like turning around to her and saying “DO YOU KNOW WHO I AM?”. But of course I would never do that, instead I went to a gift shop and they happened to have a guestbook so I wrote inside ‘Lauren Winslow-Llewellyn, UK’ and I did an arrow to my name and wrote ‘Its my town’. I started giggling at my comment so Craig came over to see what I was up to and also began giggling which attracted the attention of the shop clerk who inquisitively came over and we backed out the shop. 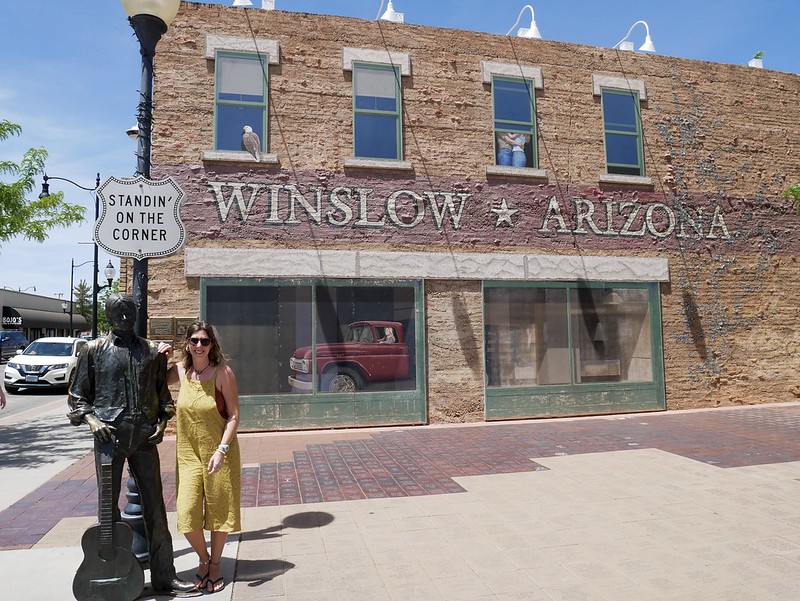 We continued along the main highway where the Route 66 used to be until we arrived back on the historic road in Holbrook. The town was another has-been dive with huge motel complexes all boarded up. But they did have a very cool WigWam motel that was still up and running with individual concrete wigwams set around a courtyard. Each teepee style building had a stunning classic car parked outside which we spent awhile gawping at. Craig and I both love vintage cars and we couldn’t help but be disappointed at how ugly modern cars were compared to these gems. 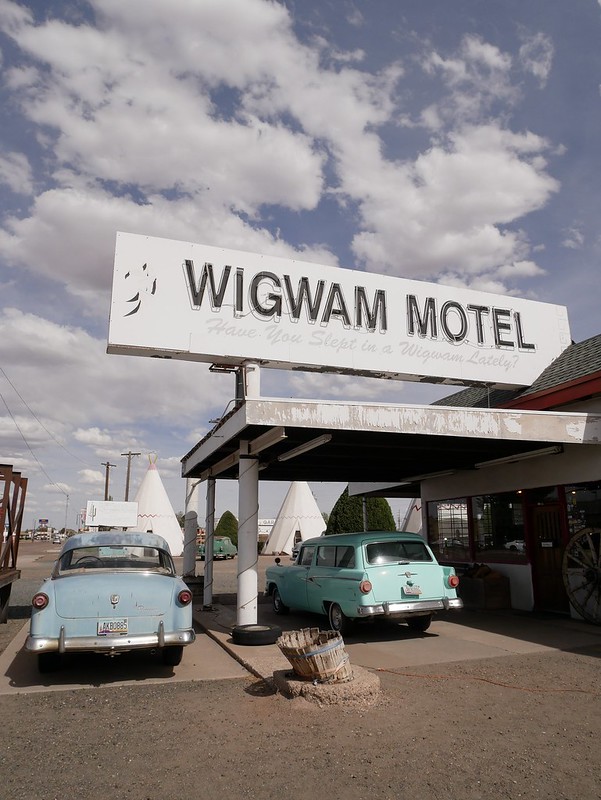 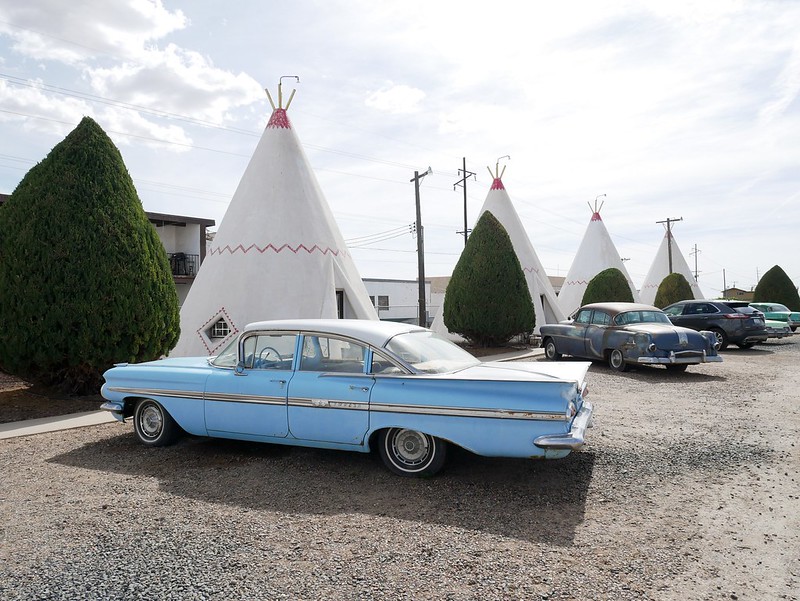 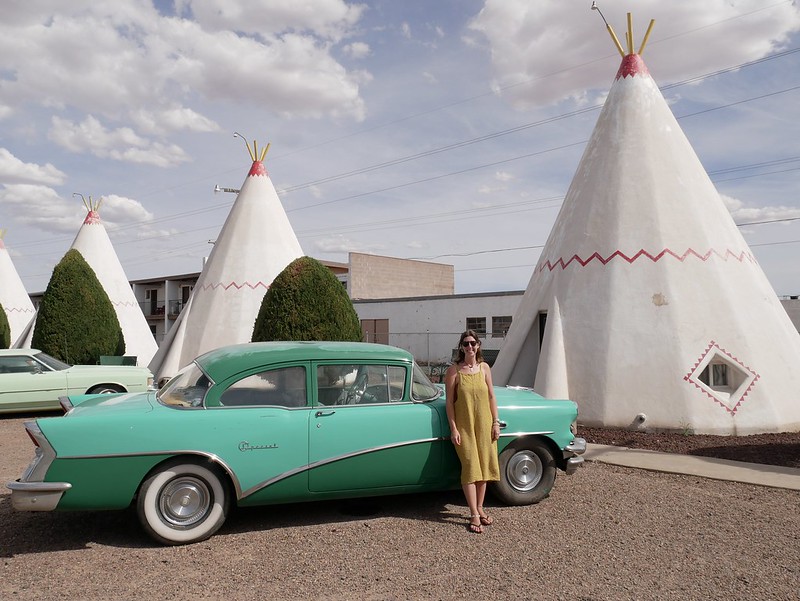 Nearby Holbrook was the Petrified Forest National Park. It’s certainly not one of the big name parks of America but we swung by as we were in the area. On the way we passed three pronghorn antelopes grazing in the grassland before they spotted us and ran away. Sadly they just did a slow gallop but these antelopes can run up to 60mph and are the second fastest land animal on earth! 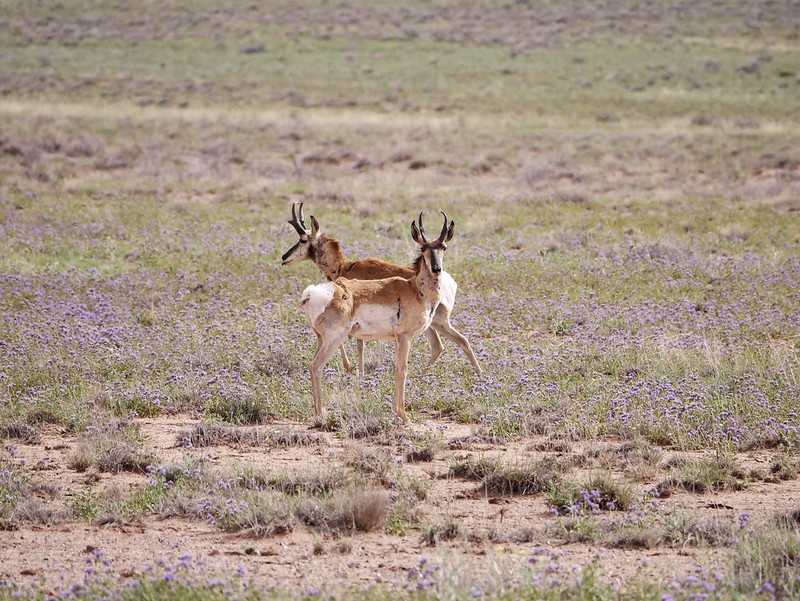 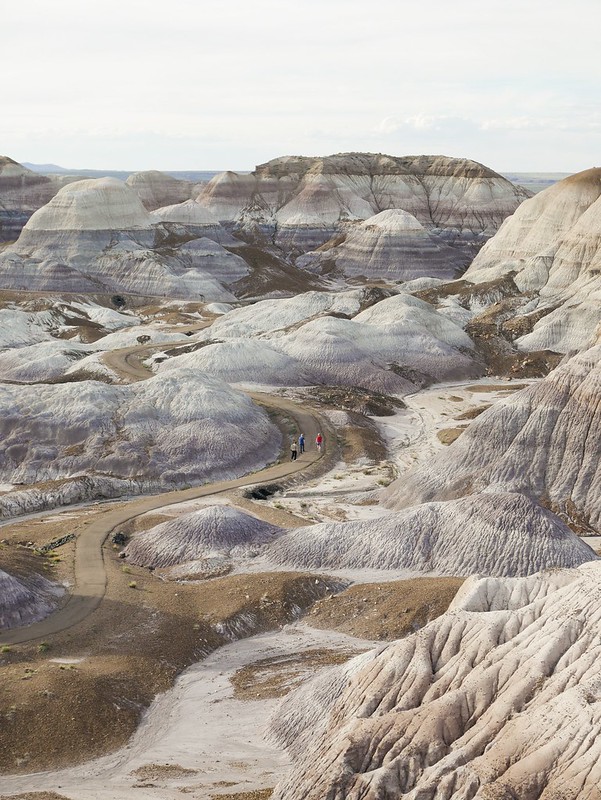 We didn’t really know what a petrified forest was until we visited the park and it’s quite fascinating. Over 200 million years ago trees fell down into the ancient rover system and got jammed in the banks, buried deep by all the sediment. Minerals slowly absorbed into the wood and began to crystallise. It literally turned the trees into stones, full of precious jewels which sounds like a fairytale story but it’s true and the stones can be full of colours thanks to all the minerals. 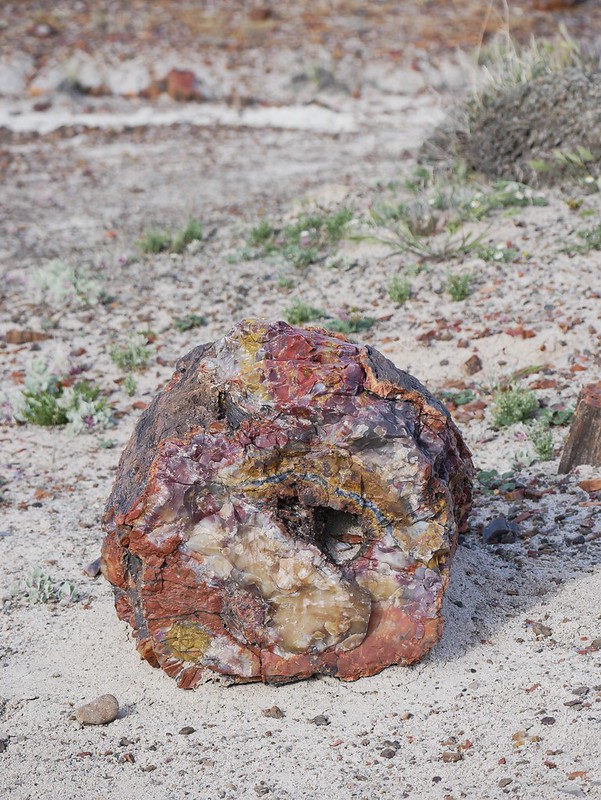 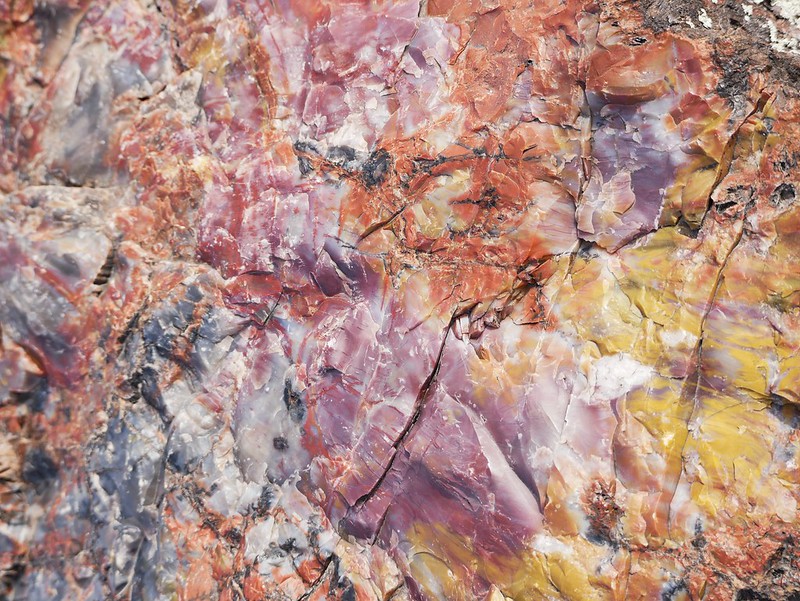 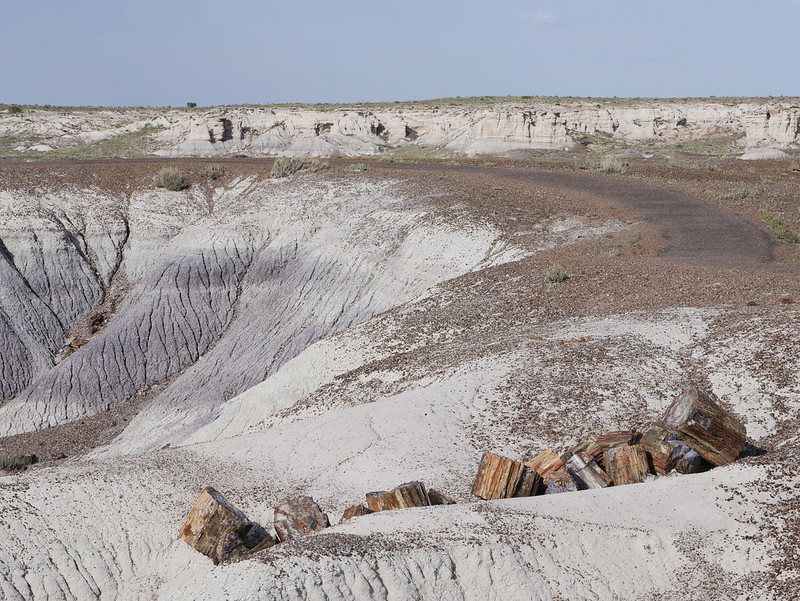 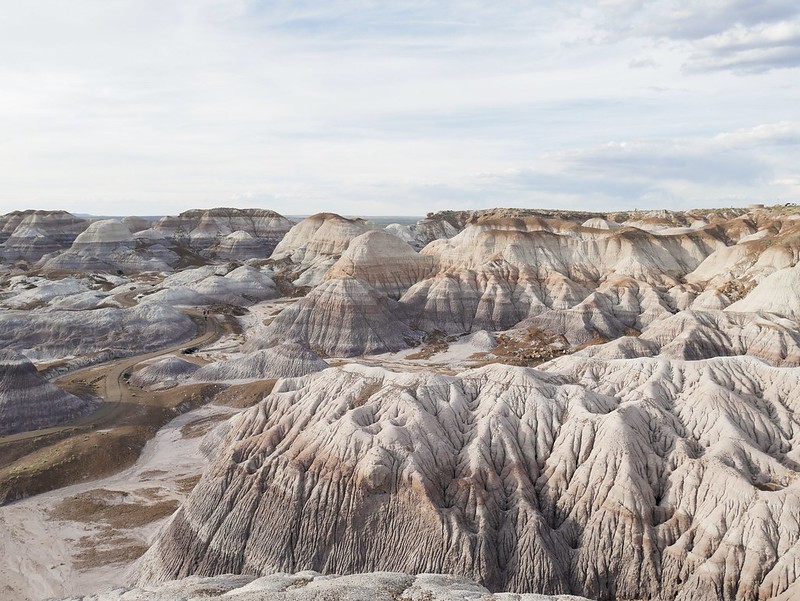 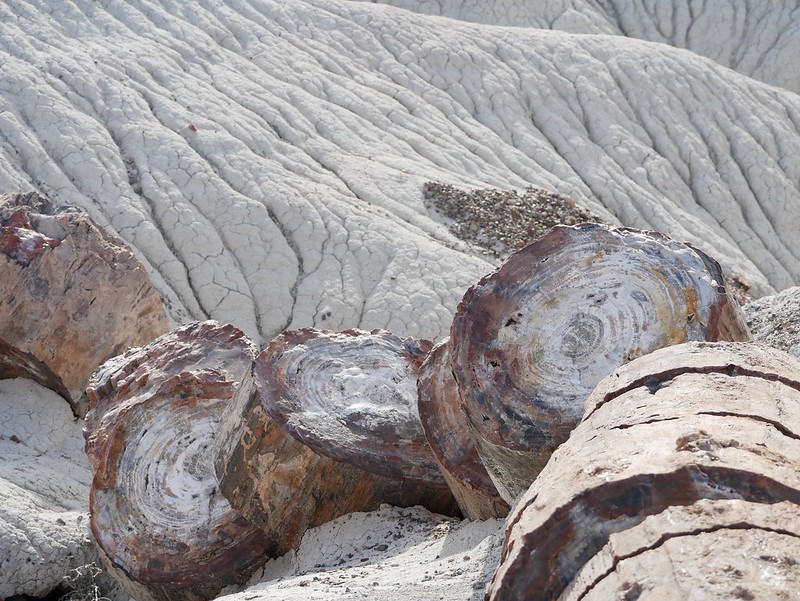 We walked a few short trails in the park and witnessed dozens of petrified trees. The strange thing is when they are unearthed it’s the whole tree trunk laying flat but as time passes they crack into neat slices. It looked like they’d been cut by a human but it was all Mother Nature. We passed some really colourful little birds and our first collared lizard which had the most amazing turquoise patterned skin. 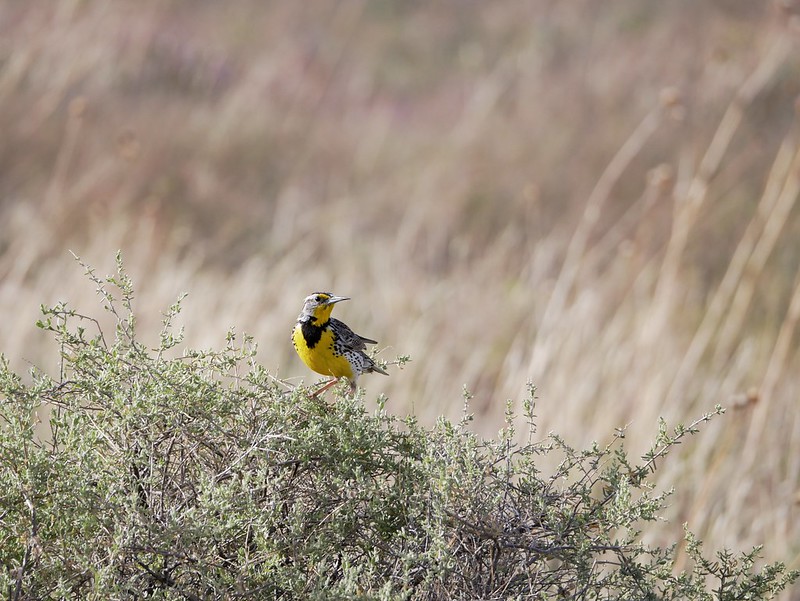 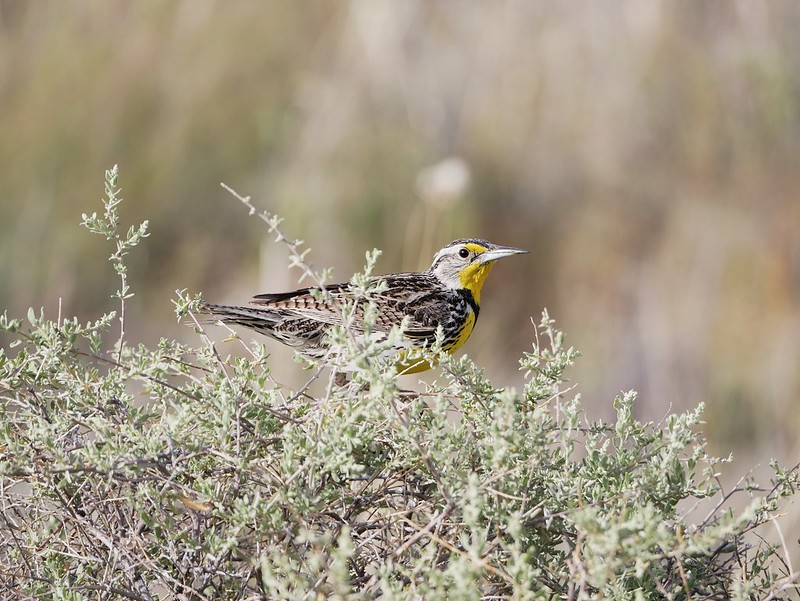 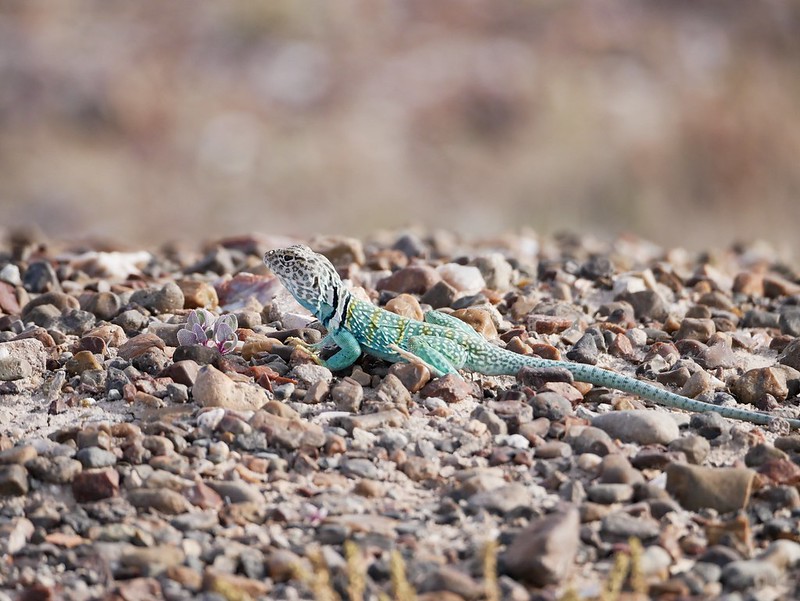 There were strict signs in the park not to steal any pieces of petrified wood and in the information centre were two letters from people who had taken a piece of wood and realised it was wrong, sending it back with an apologetic letter. One letter which looked like it was written by a kid said he had return them as they’ve caused him nothing but bad luck. His bike was stolen, he felt like he was getting a hernia and his girlfriend wanted to split up with him.

In the northern section of the park were some really colourful badlands. While the south was a bleak beige with some tinges of blue and grey, the north had vibrant red hills. We left at dusk, finding a dirt track off the highway to stay at for the night. As we cooked dinner the sky quickly filled with cotton candy clouds which intensified as the sun dipped further behind the horizon. 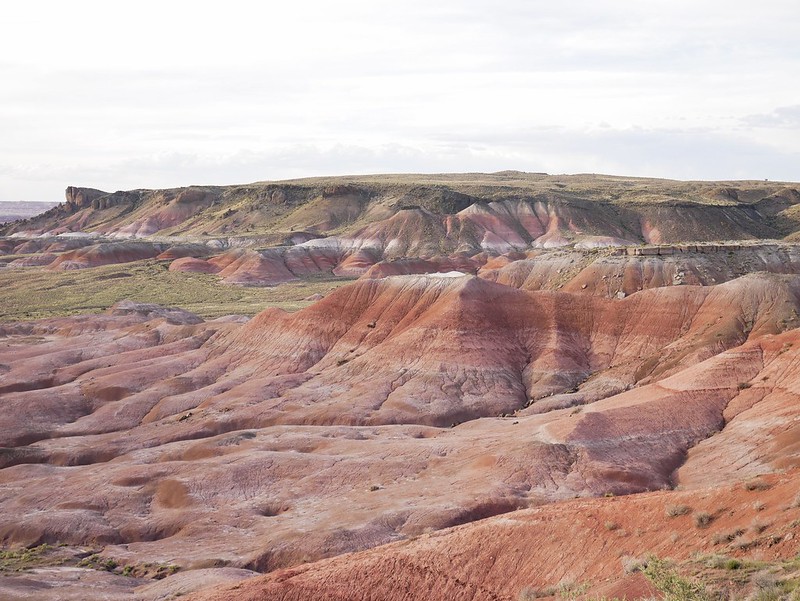 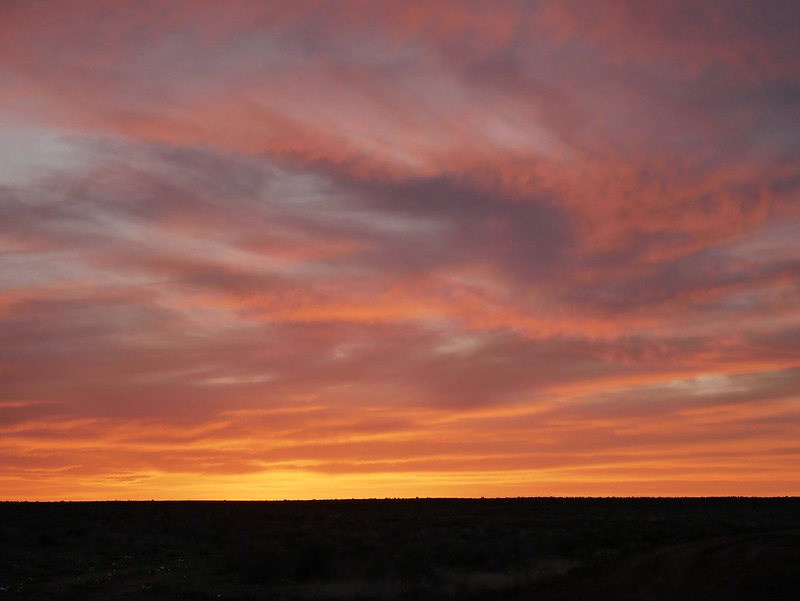 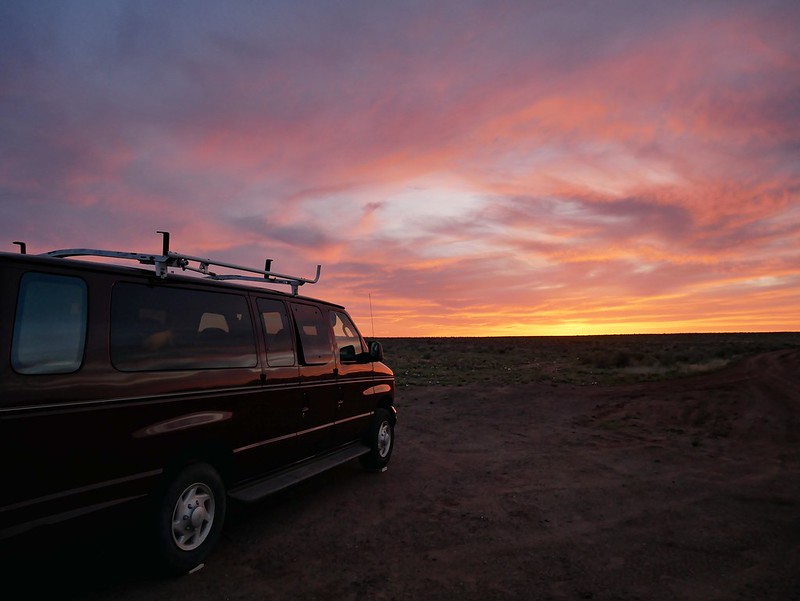