I don’t know if it was the weather or us but we just weren’t impressed with the Grand Canyon on our first visit in 2010. We slept near the entrance of the park in the National Forest, listening to howling wolves or coyotes during the night and waking up to a fresh layer of snow. It was a beautiful time of year to visit with the wintery snow but we only got glimpses of the layered red canyon between low lying cloud, but even when the clouds cleared we were left wondering what all the fuss was about. We even did a long hike into the canyon and still weren’t wowed. So I guess we had to visit again and see if we’d fall in love with the place.

So back we went, passing the forest where we’d slept on that snowy night. We peered over the rocky ledge for our first view of the day and both said “nah, it’s still not that impressive”, I guess it was just too grand for us. The fact that the Colorado river calved this whole canyon is mind blowing but the sight was more like very impressive roadside scenery than a jaw dropping National Park to us. We did pass a male elk in the forest though so we pulled over to photograph him. It’s the first time we’ve seen one in spring so a unique occasion as the antlers are covered in velvet. Eventually it will peel off in a fleshy mess and will be left with the typical hard antlers. 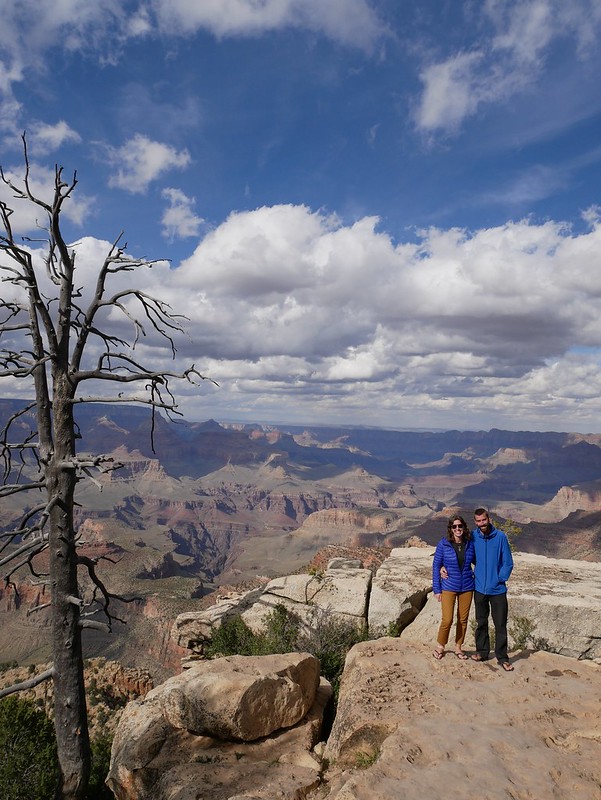 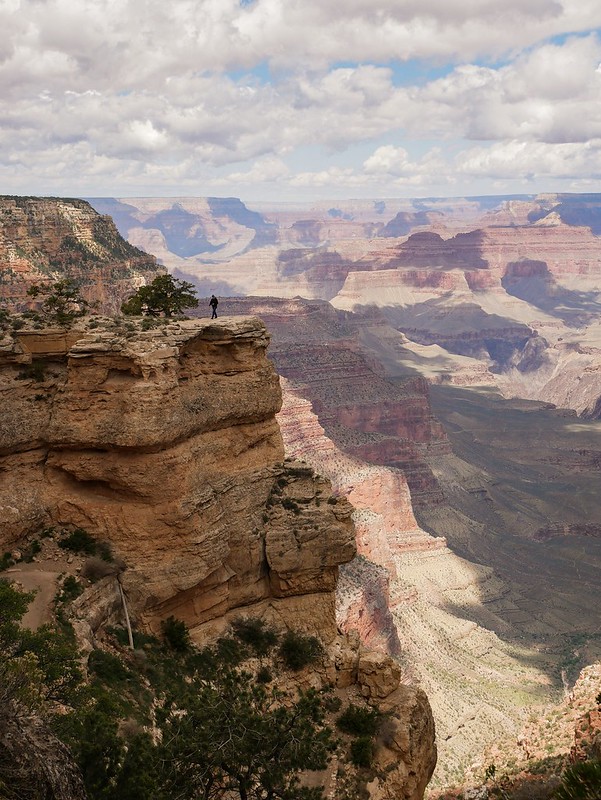 We stayed in the van and I used my zoom lens through the open window to capture the grazing elk. It didn’t take long for a few other cars to pull up and as usual we were disgraced by people’s behaviour. I don’t know whether it’s ignorance or just a lack of respect but everyone got out of their vehicles and walked straight towards the animal. A lady stormed towards the elk and I couldn’t help myself so I called out to her saying she needed to get back in her car and shouldn’t approach wildlife. Then she looked at me and said “what?!” and walked with such attitude towards me. She had Alabama plates on her car and looked like a real tough lady so I kind of regretted speaking up but with a slightly less brave voice and my best English accent I said “you shouldn’t get so close to wildlife” and she actually had the cheek to say “why?”. Game on bitch. I kept it short and just said “it’s illegal and rangers will fine you” (which is true) and she said thanks and walked off. My photos were a little shaky after that discussion but we continued snapping. More cars arrived and the elk was gradually making its way towards the road. 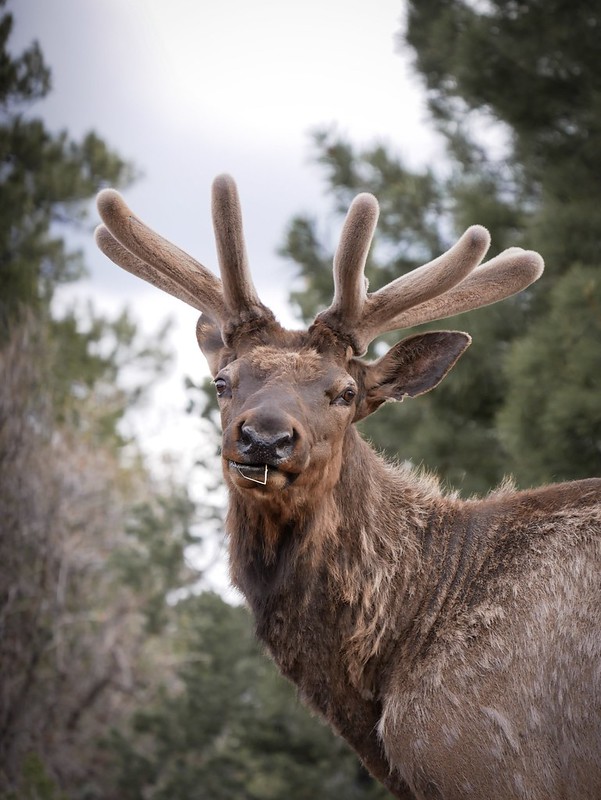 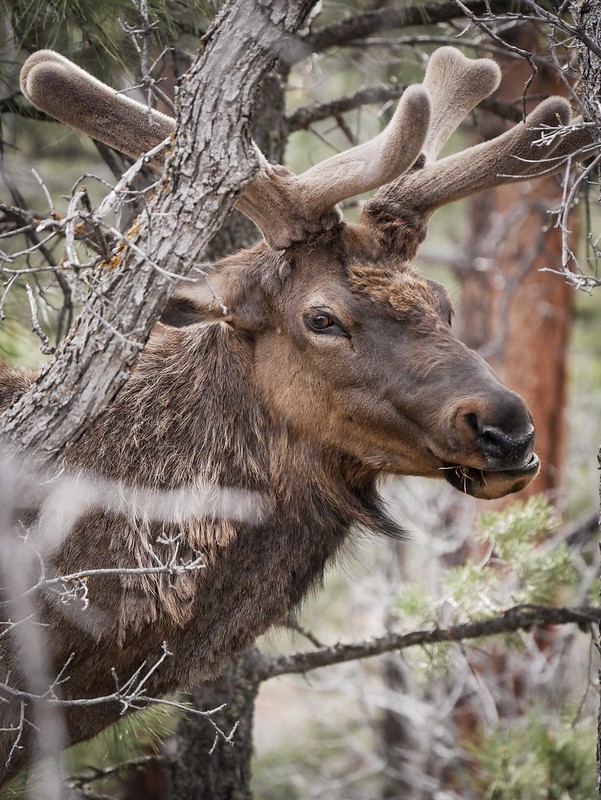 The problem is even if people know the rules, they break them when they see other people doing so. I kind of get it, everyone’s standing outside blocking your view so you also get out to get a photo, but things can get pretty out of hand. There was no need for people to exit their vehicles as the elk was so close, but people were walking towards him and filming on their iPhones. But the worst was when two grown women parked right next to the elk, just two meters from him, you couldn’t get a better location to photograph the animal but they got out of their car and with their backs to the elk they took a selfie with him. What they didn’t see was the elk get surprised by their actions, he looked up and reared his head in a warning manner. They were so lucky that the elk didn’t ram them, I wish it had though to teach them a lesson. Elks are different to bears – if a bear attacks a human it’s usually put down as it may get a taste for human meat, it breaks my heart and makes me extra angry when I see people approaching them on foot. But elk and moose do it out of defence so they can attack and live to tell the tale, hooray. 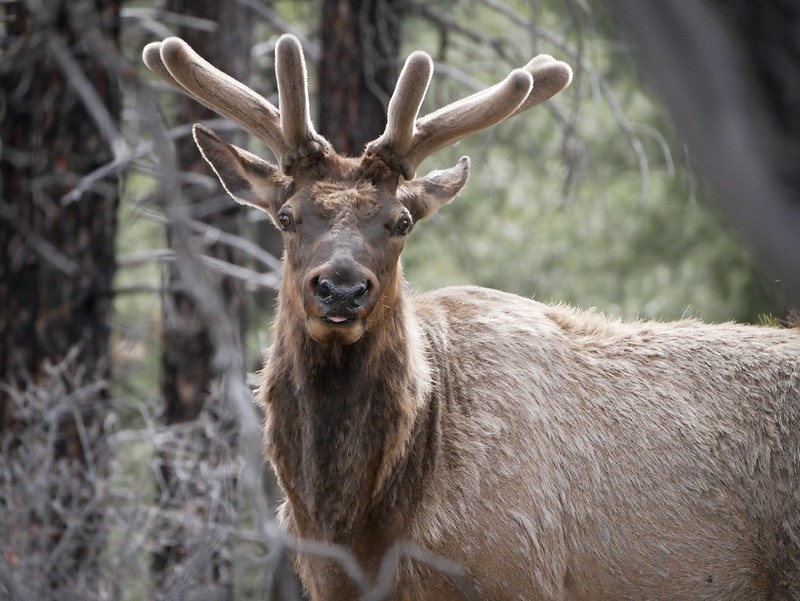 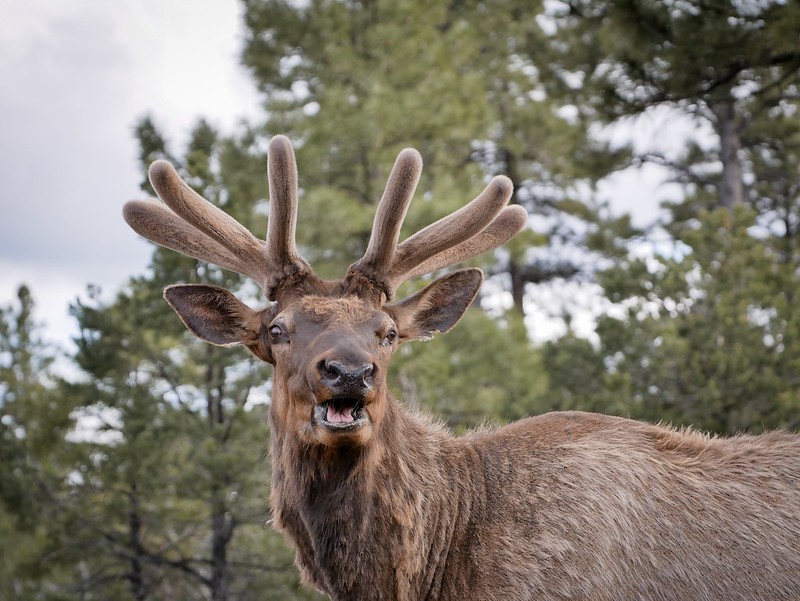 We exited the other side of the park to sleep in the National Forest and it was a really popular spot. The best locations had been taken but there was still plenty of room around. We found a nice spot but a dead tree behind us gave Craig the nerves. He was worried it would snap and crush us so we found a safer area to park nearby. A couple turned up in a campervan soon after and even though there were still plenty of options to get their own spot they literally parked right behind us. I was fuming, whatever happened to campground courtesy? On the plus side we realised if the dead tree did collapse it would fall on them and prevent it from touching us. I was having a pretty bad day with humans, they were all driving me mad.

The next morning we went back into the park and did a hike down the canyon. You have to do a pretty long trip down to even get a view of the river and we did that on our last trip so this time we took it easy. We got some nice views but honestly the view at Horseshoe Bend where the Grand Canyon is only just beginning to form was 100% more impressive. The hike back up the switchbacks was surprisingly tough. I enjoy mountain climbs as it’s tough to begin with but once you reach the top you know the rest of the way home is downhill and easy. Canyons are my nemesis, they seem so easy to hike on the way down but the uphill is brutal. We learnt that on a canyon hike in Peru with a comparable depth to the Grand Canyon and it should have really been hiked over two days with an overnight stay in the oasis at the bottom but we pushed ourselves to do it in one day and we refused to buy water at the bottom as it was too expensive. It’s the only time in our 11 years of travel that I thought we were going to die. We had severe dehydration and I could feel my throat almost closing up. That’s when I took our final two sips of water and we weren’t even halfway up the canyon. A few locals came down on donkeys but no one had water. We became willing to pay anything but no one had anything to give. We must’ve had a guardian angel looking over us as the last person to pass us had a whole bottle of coke. We didn’t meet anyone else on that hike so if it wasn’t for that man with the bottle of cola tucked into his donkeys satchels we probably wouldn’t of made it. We laughed like hooligans as we took it in turns to gulp the fizzy drink and vowed to always bring extra water and never hike deep canyons again. 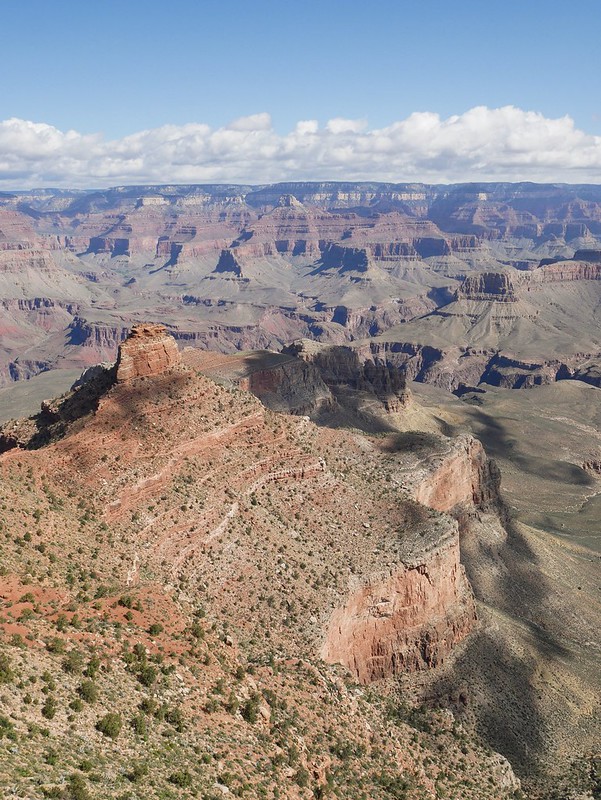 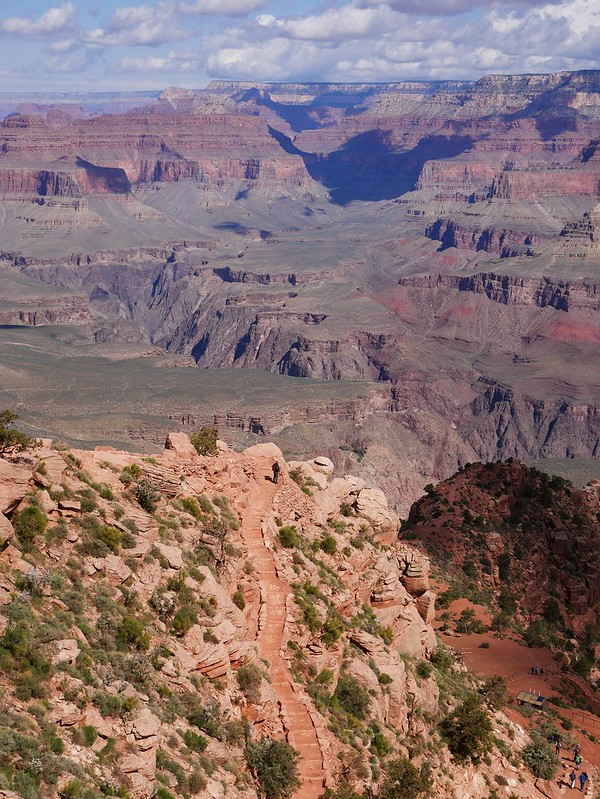 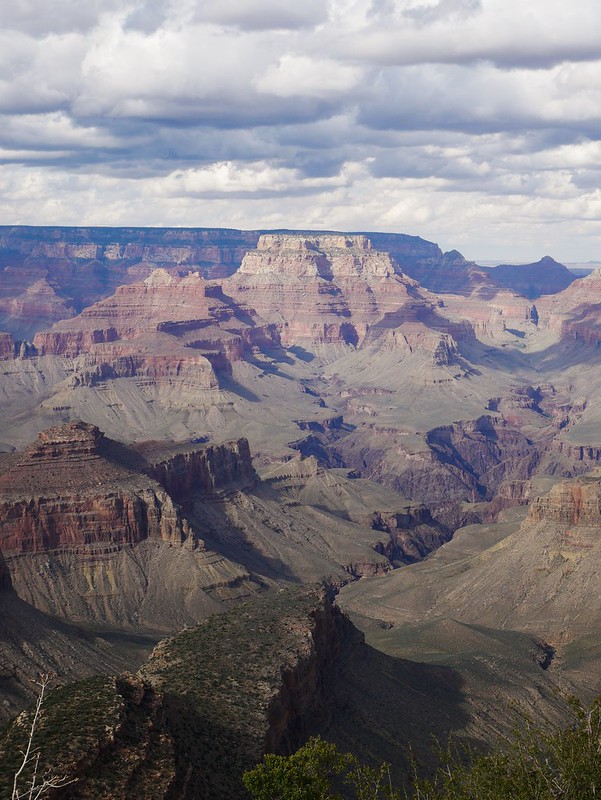 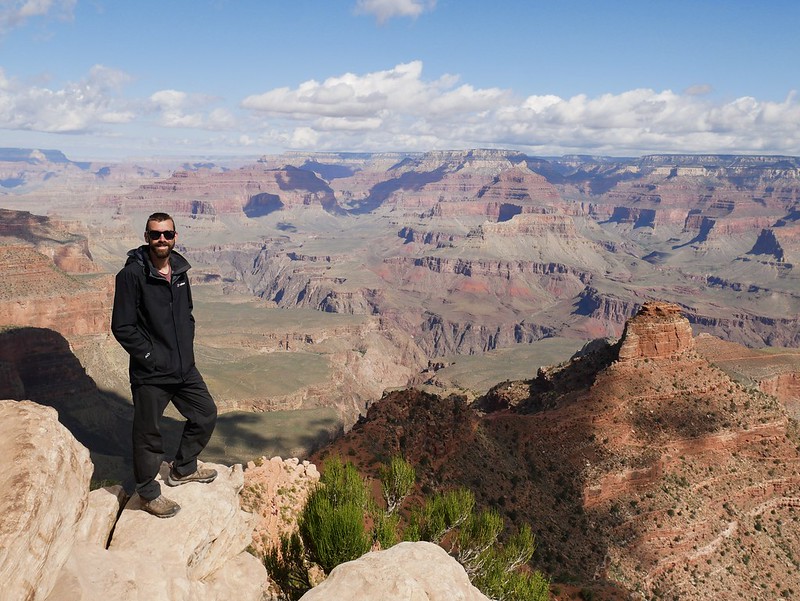