We had a good start to Oregon with our first glimpse of one of North America’s mighty peaks – Mount Hood. A cloud was lightly wrapped around its surface but it gradually grew in size until the mountain vanished. We drove up another pass, received more snow and then headed down, we couldn’t hike in the deep snow so there was no need to hang around. On the way we picked a spot to take our first shower in 5 days. My hair felt slick with grease so I couldn’t wait to wash. We had very few options of places to park discreetly so we ended up in a road where just the start had been plowed of snow. It was drizzling with rain, there was a chilly wind and we only had cold water to wash with but we knew it would feel good afterwards. I went in first only to receive the most pathetic dribble on my hair, like someone was slowly melting ice cubes onto my head. It was a new solar shower so we had to quickly retreat into the van while Craig used his penknife to make the hole bigger. It was still a fairly slow trickle but it worked and we warmed up with tea afterwards. 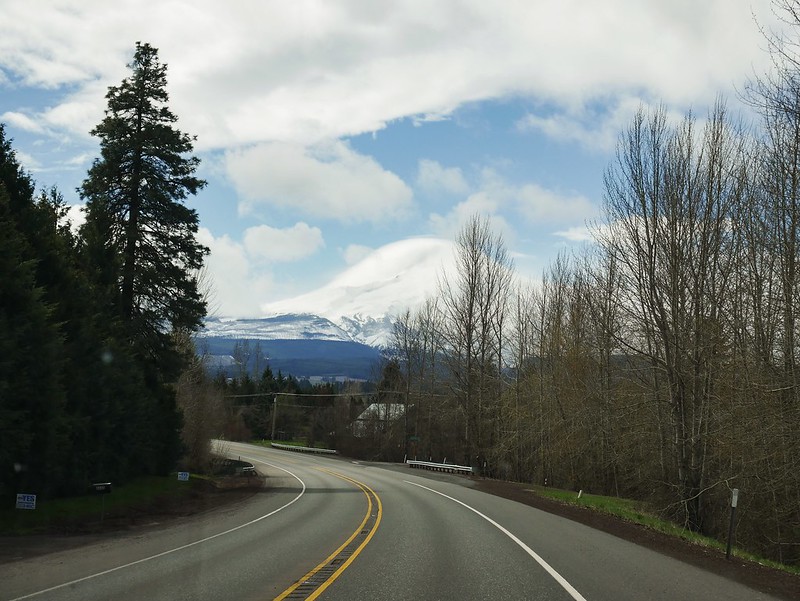 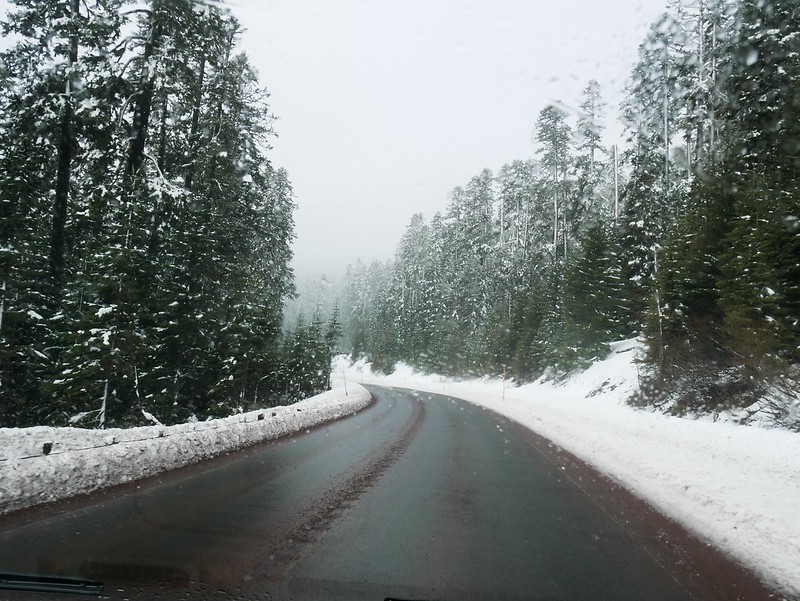 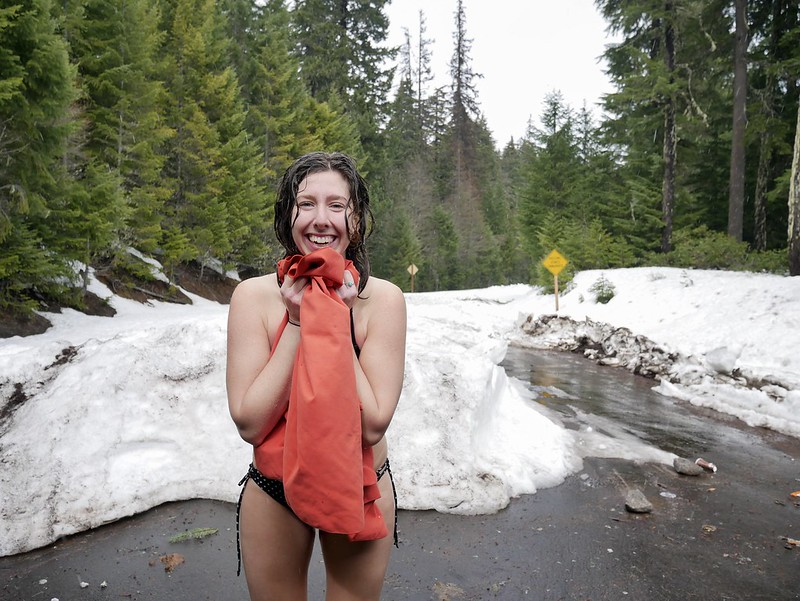 As we continued south we stopped at Smith Rock State Park. It was a busy little spot and our first sunny day too so we were excited to do a little hiking. Considering the area was fairly dry and barren the scenery that popped up here was pretty special with red rocks rising straight up beside a gushing river. Rock climbers looked like tiny specks as they headed up the shear walls. 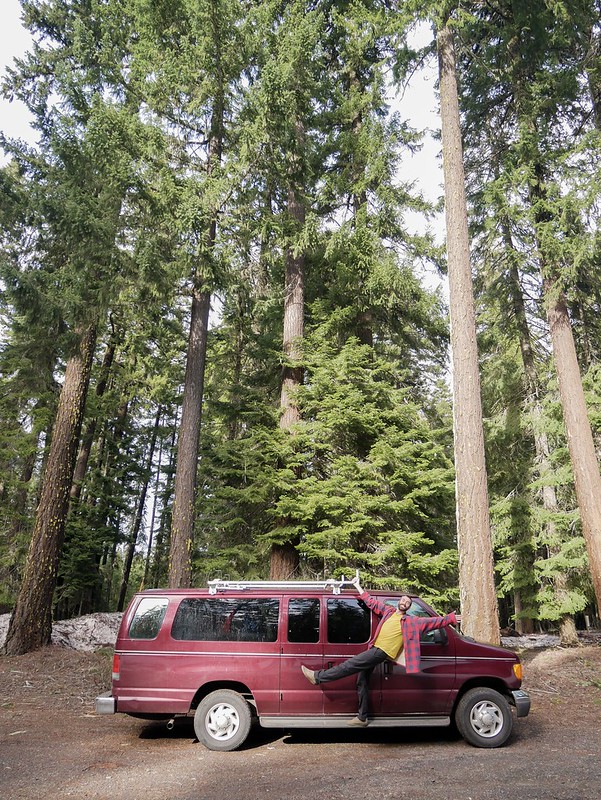 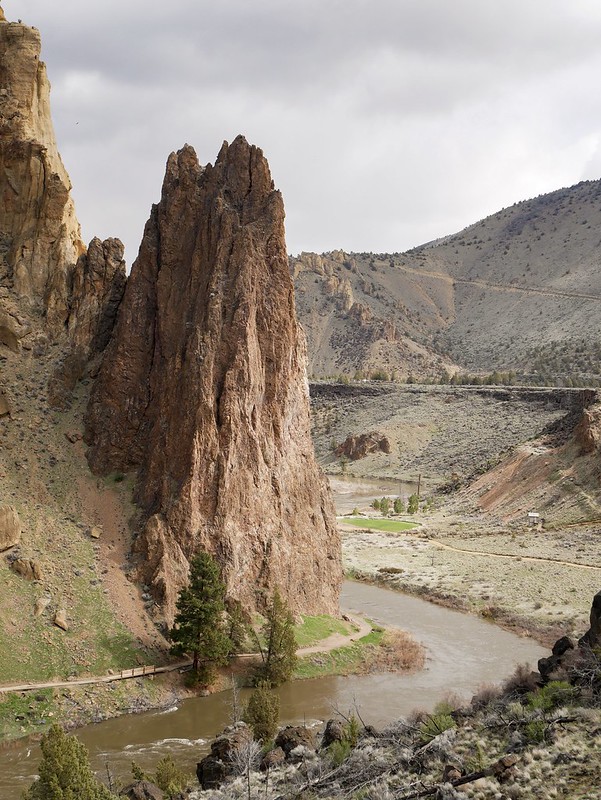 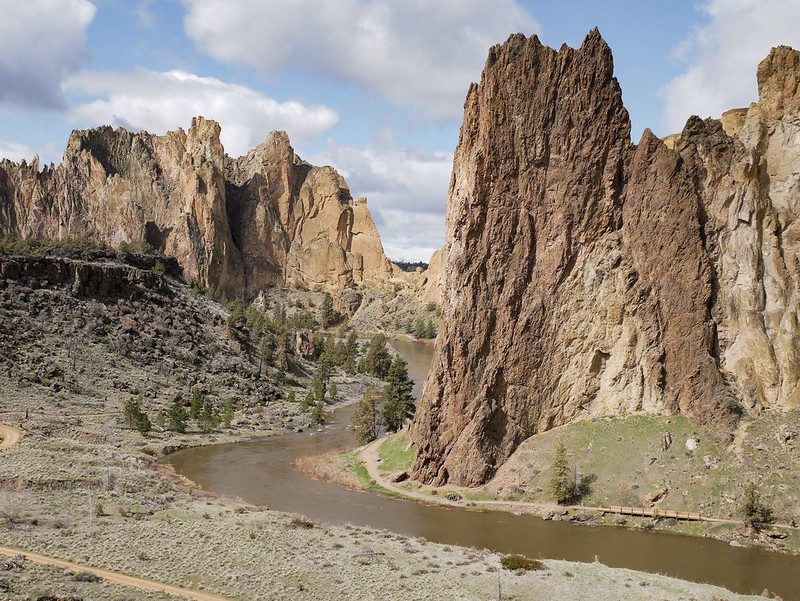 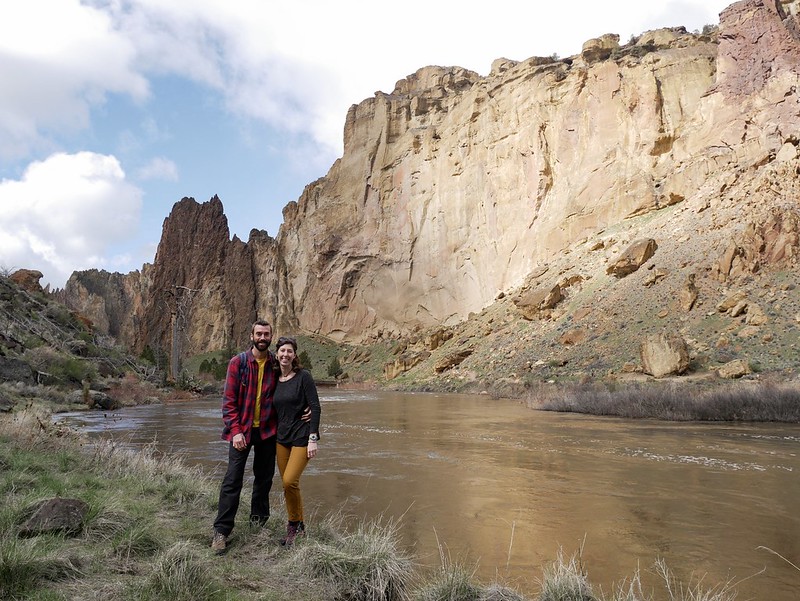 The distant peaks were finally all visible which made us want to get closer to them so we took a detour to the little town of Sisters. We had views of the peaks the whole drive but didn’t stop until we got to the ranger station where we asked about hiking in the area. The lady basically laughed in our faces and said there was still too much snow to hike. In the end she recommended a drive to Suttle Lake for a view or Mount Washington and a stroll along the Metolius River. By the time we got to the viewpoint clouds had enshrouded it so we took the river road and strolled along the shores. A beautiful bald eagle flew past us and then landed on a tree. I love how easy bald eagles are to spot with their prominent white head and tail. Because the area was still considered in the off season, some campgrounds were closed while others were free to stay at. We had the same situation in Alaska and it’s a nice treat for us to stay in a designated camp spot with a fire pit for free. We picked a sweet spot surrounded by trees that seemed to reach into the sky. 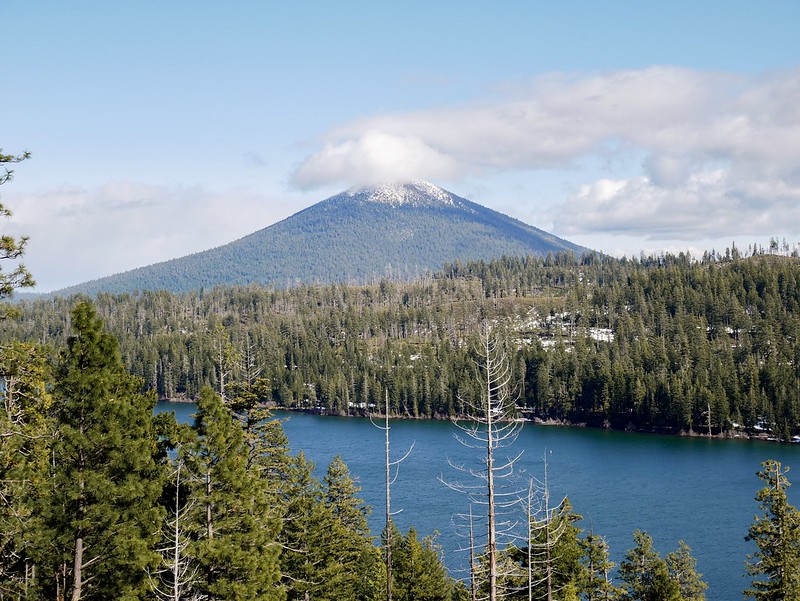 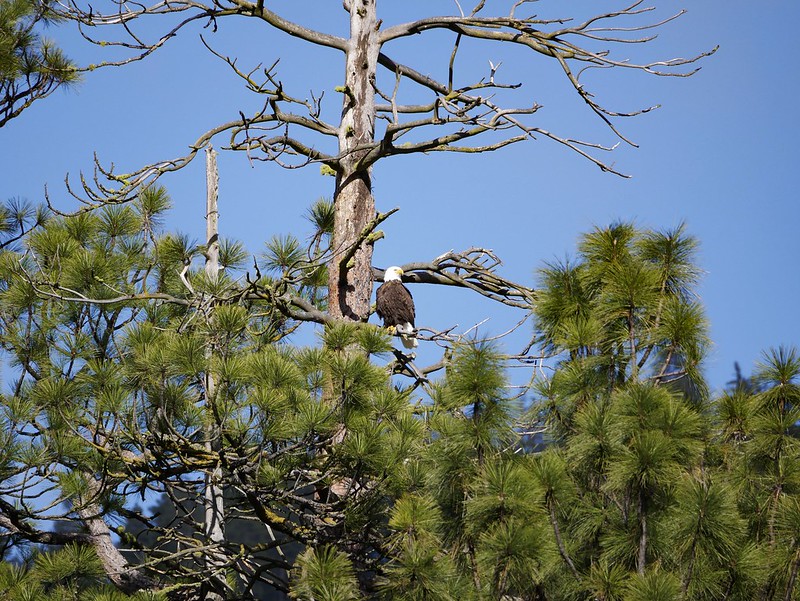 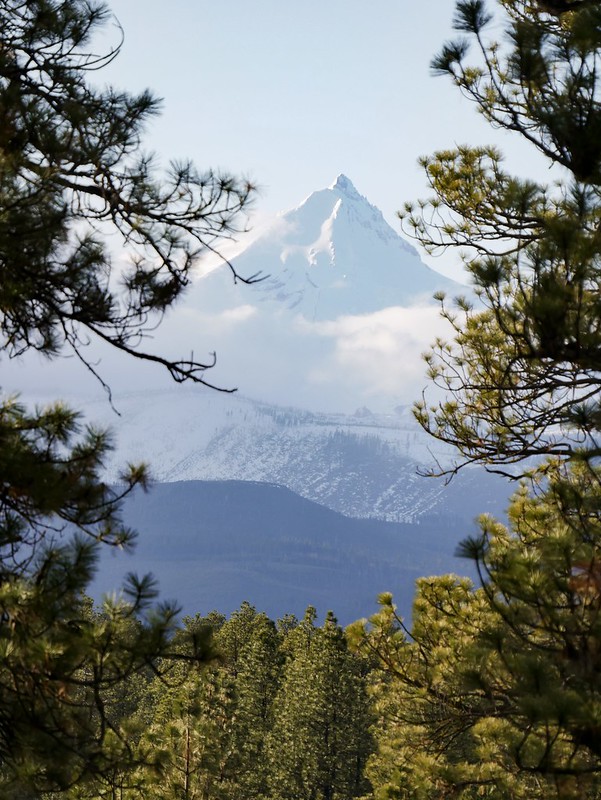 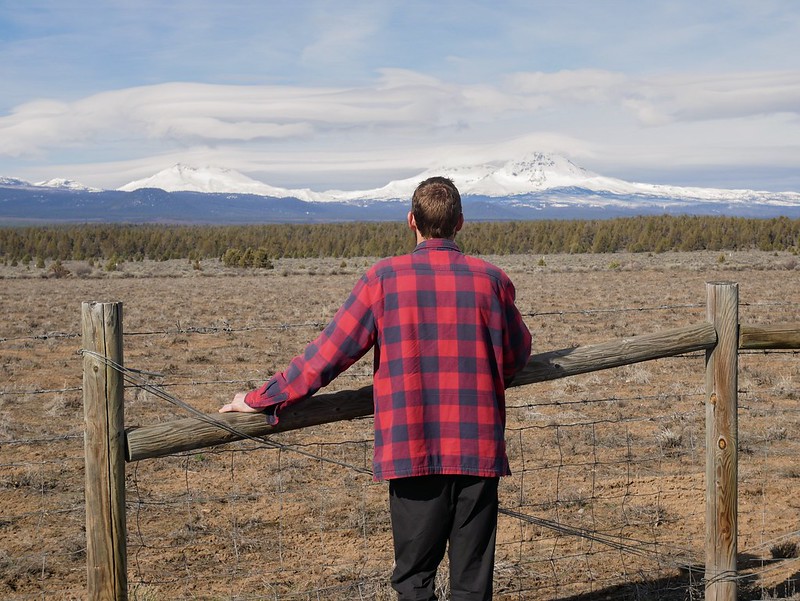 The next morning we headed to Bend along a different road with even better views of the high mountains. Mount Washington’s summit was as pointy as a sharks tooth and unusual clouds drifted above the peaks. Bend has become very popular in recent years and it’s easy to see why; they have desert, volcanoes and mountains on their door step, it’s voted the most dog friendly town in America and theres a whole trail dedicated to visiting all the breweries in town. While in the area we decided to visit the Tumalo Falls but the road leading to it still hadn’t been plowed so we followed the locals and walked along the packed snow. We had sunshine in one direction and storm clouds the other way. The waterfall was beautiful, dropping 98ft and surrounded by big pine trees. When we got back to the carpark a gorgeous coyote looking dog wandered up to our van. We’d seen her earlier with a man but he was nowhere to be seen so after we’d had plenty of strokes we got a passer by to call the number on her collar. The owner said it was normal for her as she just wanders back to the car when’s she’s had enough walking. It was very trusting of the owner, I think people would be too scared to allow their dogs to do that in England. As we packed up to leave the sweet dog stood at the start of the trail, patiently waiting for her owner to return. 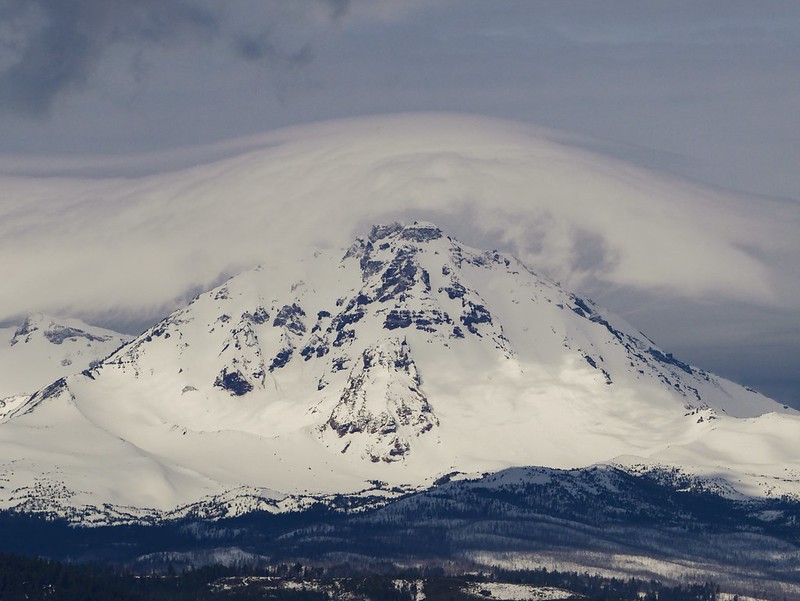 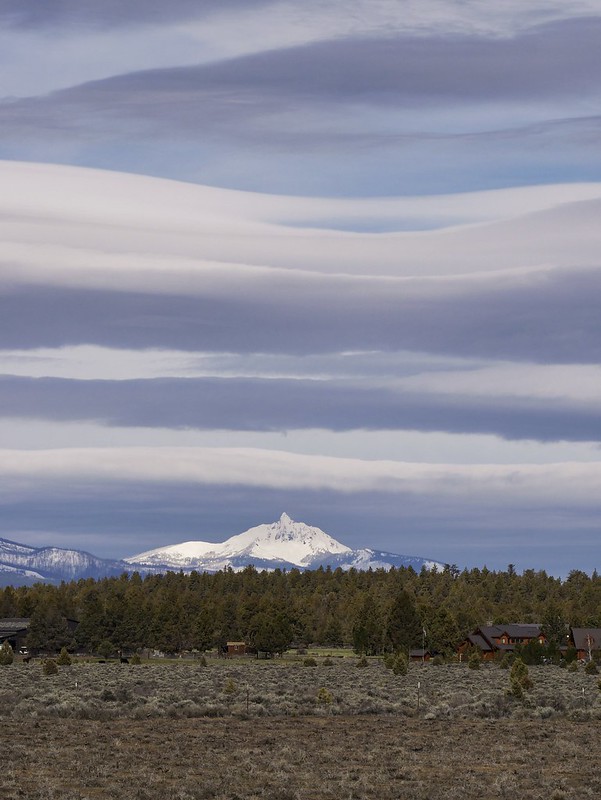 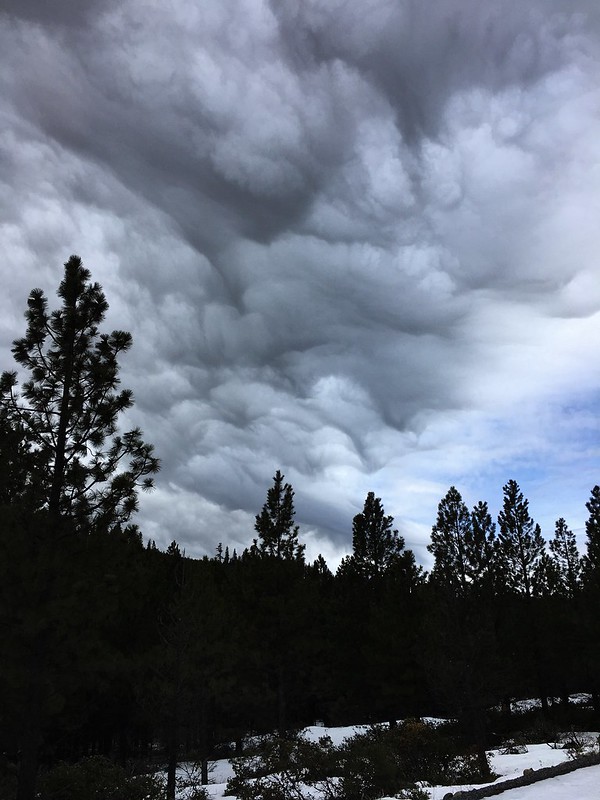 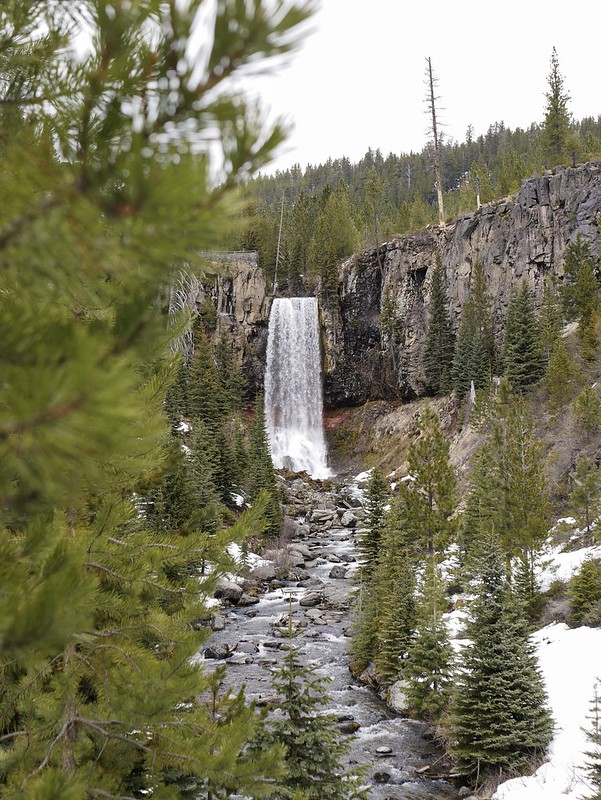 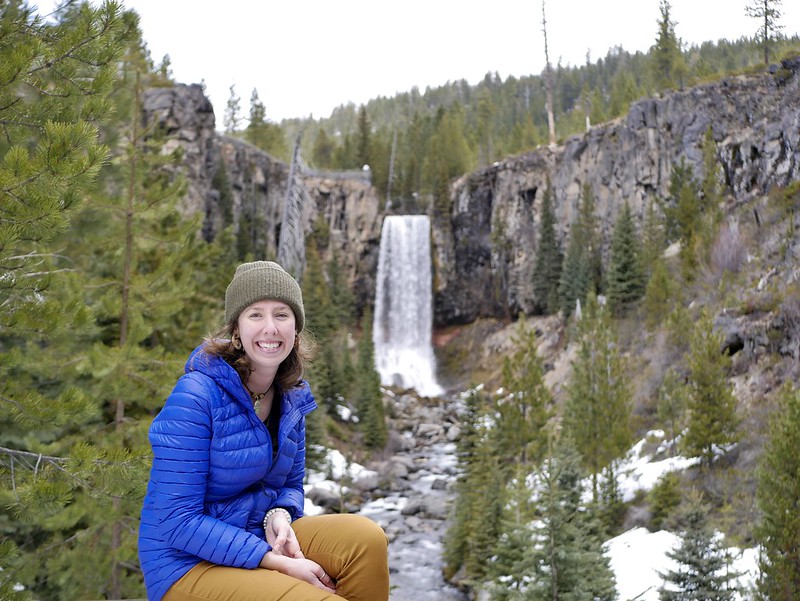 We spent the night camping on BLM land near the badlands. It was a lovely quiet spot beside juniper trees but before we went to bed we could hear an animal getting into the bonnet of our van. Sadly we’ve had the misfortune of travelling with mice before and it’s not a pleasant experience hearing them scurrying around all night. So we closed all the air vents and hoped we wouldn’t wake to the sound of them running around the inside. We did a walk in the badlands the next morning but they were a little bland for us and the scenery was repetitive and bleak (it didn’t help that it was overcast) so we headed back to town and bought some mouse deterrent which was 100% pure peppermint oil. We put a few drops onto cotton wool balls and placed them around the van. Supposedly they act as a sort of magnetic field for mice as they really hate the smell. We used the same technique in Australia where we had a mouse family on board so hopefully this time we can prevent any hitchhikers.

On our way south we stopped at the Newberry National Volcanic Monument for a short stroll. The scenery was totally different to the previous two hikes as we walked through a huge black lava field. There was a clear line where the lava stopped and the forest began again and the trail led to a view of a lava butte. 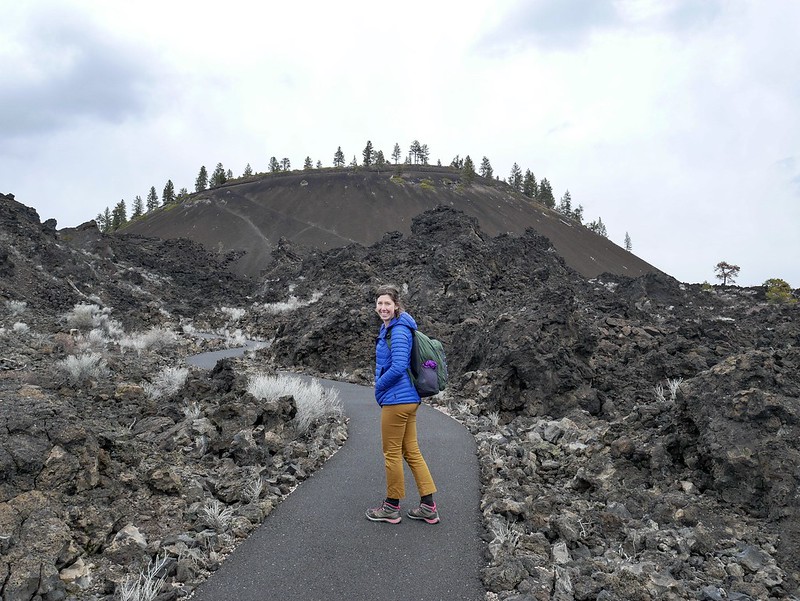 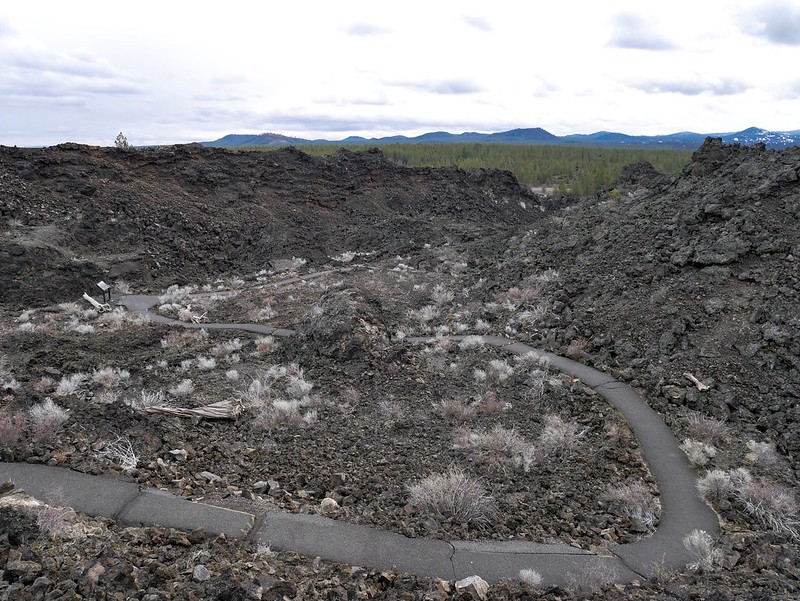 Then it was time to make some distance south, we ended up driving the Oregon Outback scenic byway and it proved to be a lovely drive. It was a peaceful route without intimidating trucks and the scenery was totally different as the cascade mountains catch all the moisture and snow in the air so even though we were at a high elevation it was more like high altitude desert than the mountains. There were rolling hills, ranches full of cows and falcons constantly swooping above us. It wasn’t very special but it was a nice change and we ended our day in Summer Lake where there was a rustic hot spring. It was at a sort of rural resort with a classic tin barn housing the main pool and then two small outdoor pools made with stone. The pools were surrounded with natural shrubbery to give protection from wind so they had a nice secluded vibe. We hung out in the outside pool for a couple of hours chatting to some friendly locals. The water was warm rather than hot which I actually enjoyed as it felt like a really comfortable bath as oppose to getting light headed and having to constantly get out to cool down. We camped up a dirt road nearby, getting a good night sleep before rolling into California. 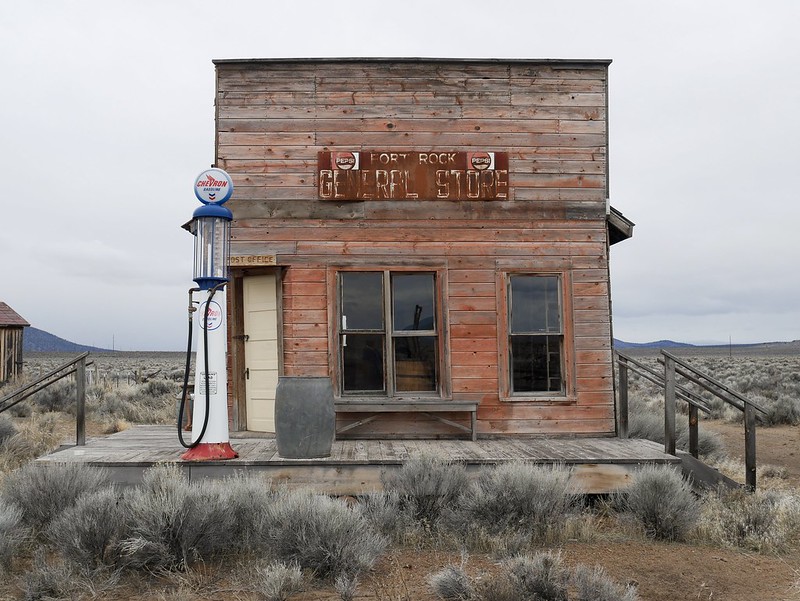 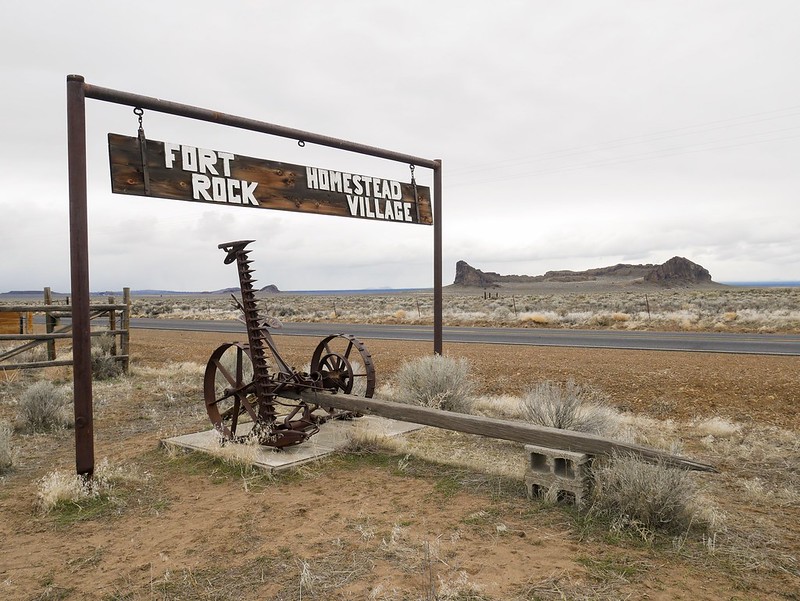 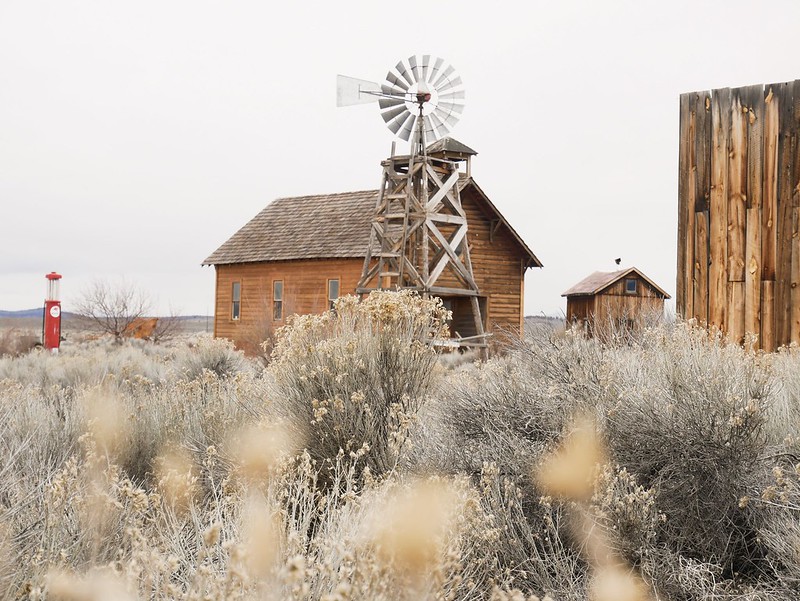 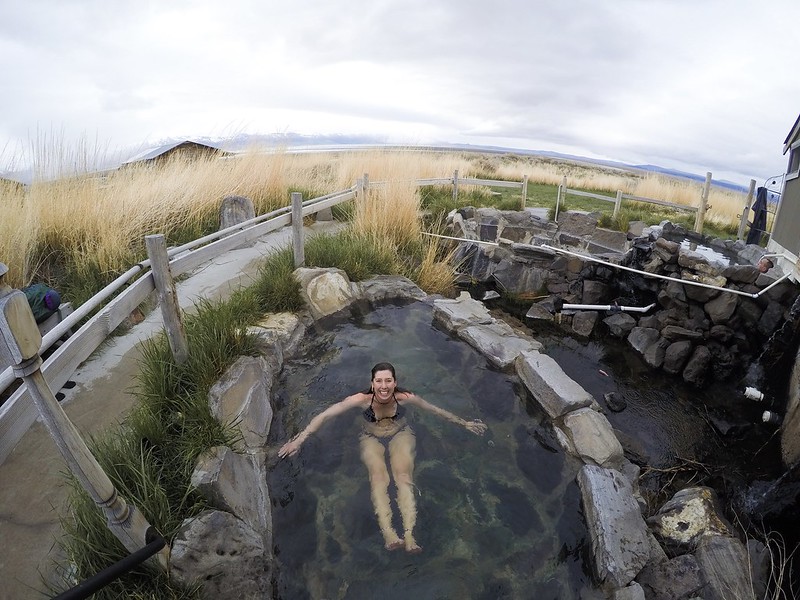 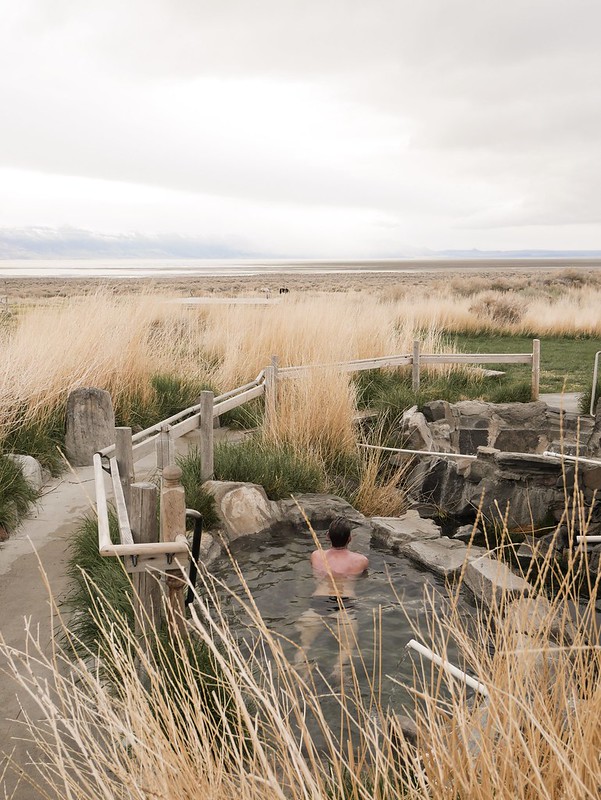 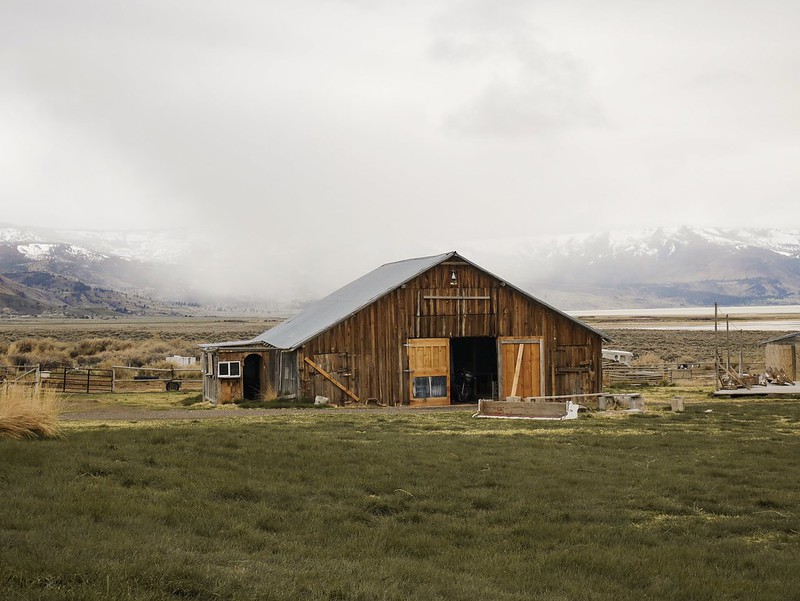