It was a rainy day but we didn’t care as we were about to start our big roadtrip and cross the border into the USA. Ruby the van looked incredible (even if we say so ourselves) and she was going to be the coziest of homes for our 6 month trip. 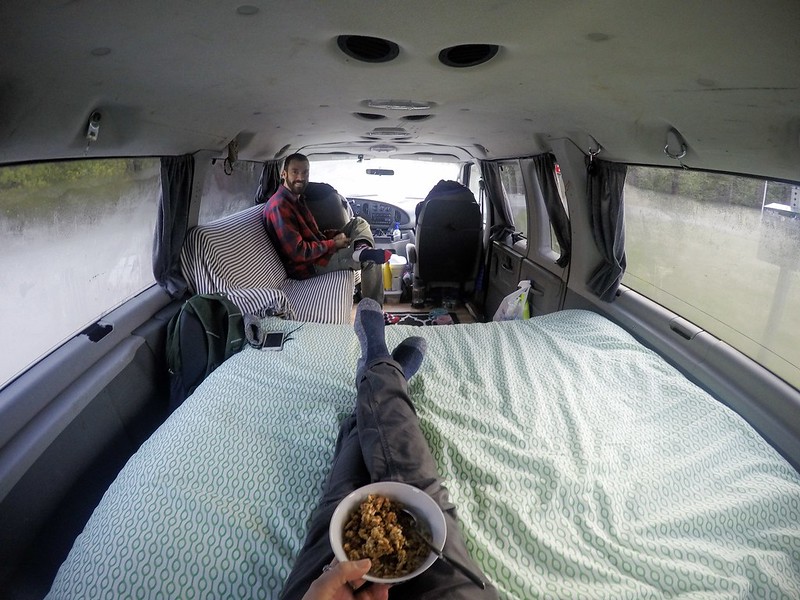 We drove up to the immigration office who asked us if we had any fruit or veg on board, we told him what we had and then he asked to have a look. I opened the side door and out rolled my funnel which I use to pee in a bottle at night (vanlife isn’t as glamorous as it looks). It landed on the floor between the officer and me so I frantically lent down to pick it up before he did. I caught Craig’s eye and then I had to control myself not to laugh. I crawled into the van and pulled out a storage container with some produce inside. I could feel my lips twitching at the thought of what just happened, like when you get the giggles at a quiet and formal dinner table, but thankfully I managed to control myself. He gave us a document and said we had to get a second inspection so we drove to the bay where three officers surrounded Ruby. Two put on latex gloves while one interrogated us. It’s amazing how we were totally innocent yet the interrogation really made me feel defensive and like I’d done something wrong. She asked us the exact date we were leaving the States and I felt all panicked and said September which is two months after our visa expires, so she had something to say about that of course. I just got my dates muddled up but geez imagine the fear a criminal has in these situations, we just had a few damn tomatoes we wanted to import! The lady seemed to like us by the end and was genuinely curious how we were so good at saving money and then she compared her job to hospitality suggesting it was similar and we just agreed because she scared us and we all gave our best fake hospitality laughter and went our separate ways.

Boy did it feel good to be back in America though. I love Canada but the USA has a special place in my heart. Each state feels like its own country with red rock deserts, perfect surf, steep mountains, pristine lakes and quirky towns. It’s cheaper than Canada, especially the gas and it has abundant national forests where we are free to disperse camp and enjoy nature on our doorstep.

We stuck to the main I-5 for the first day through Washington. It wasn’t too busy but obviously wasn’t a nice scenic drive either. We were surprised however to see lots of bald eagles flying above us and a collection of them in one tree beside the highway. 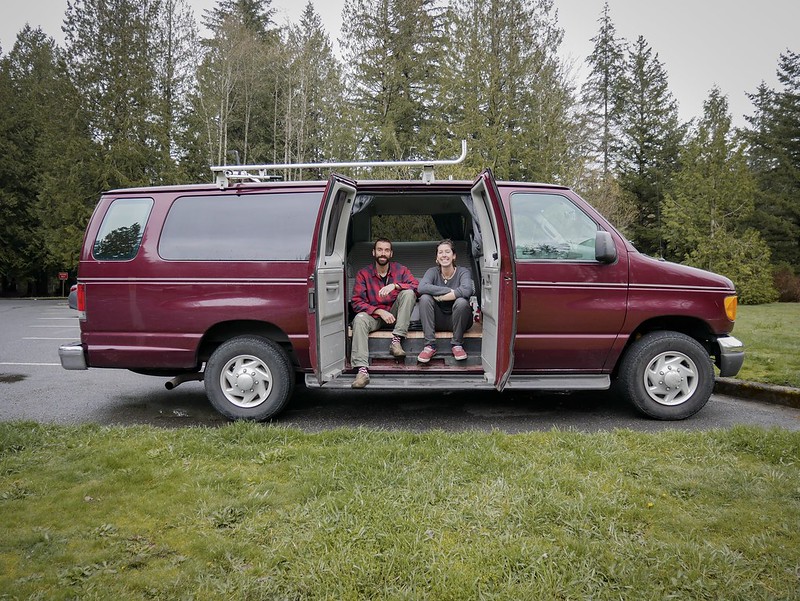 Americans are a very outgoing and chatty bunch which we love as conversation flows so easily. We keep getting compliments on our accents at supermarket checkouts. The best one yet has been “oh I love your accent!! Where ya’ll from, Germany?”.

We spent our first night across the border in a rest area where we found a spot beside some grass and giant trees away from all the truckers. We arrived at dark so cracked onto cooking our first hot dinner on our new red stove. It was on discount and much nicer looking than the standard green ones we get. As we were boiling some potatoes we were surprised to see the flames change from blue to red and remarked that it must just be more powerful than our usual stoves. After a while it felt quite hot inside and I said the red flame looked more like it belonged on a gas powered heater than on a stove. Then I got the urge to touch the table to check it was ok – it wasn’t, the plastic under the stove was melting!! The stove was too hot to even touch so we had to frantically move the hot pans onto off-cuts of wood that we kept in case we needed more for the bed (turns out they are great hot-plates). Luckily I caught the melting just in time and the table was just a little rippled. We have no idea what happened with the stove as the next time we used it it was fine, not hot to touch and normal blue flames.

We wanted to head to the mountains but some roads were still impassible from winter snow. Apparently the winter was unseasonably warm and dry this year until February when the snow arrived with a vengeance. We took the highway 2 east into the Cascade Mountains though as it was all open. Stevens Pass took us up to 4062ft and as we climbed the snow beside the road built up. Low lying clouds drifted in the valley beside us and as we reached the top a light dusting of snow began to fall. It was bitterly cold, probably because we weren’t dressed for the situation, but we ran out to take some photos of the huge snow pile rising high above Ruby. 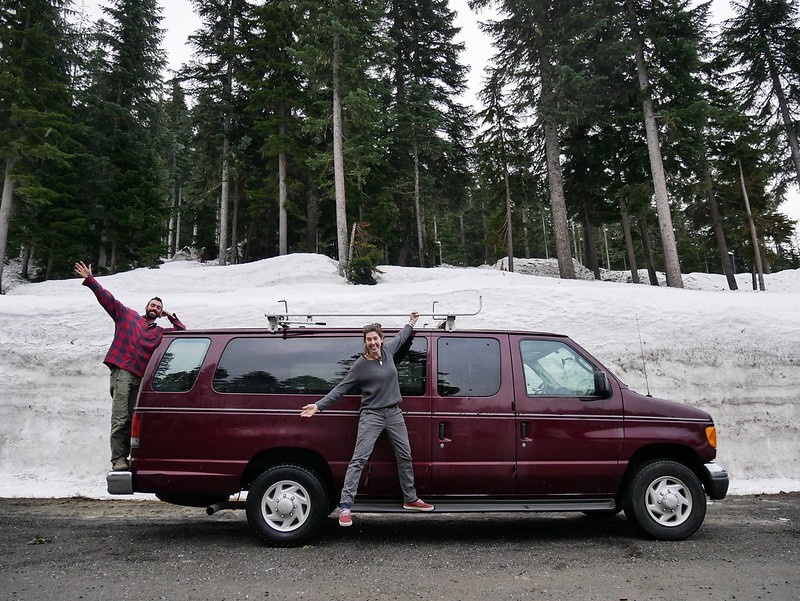 We had a cold, windy night but the sun came out the next day and we spotted a short trail to hike in a very scenic valley. A river was gushing beside the road and our trail led us steeply up to a giant boulder with a great view of the pine forested hills and snow-capped mountains. 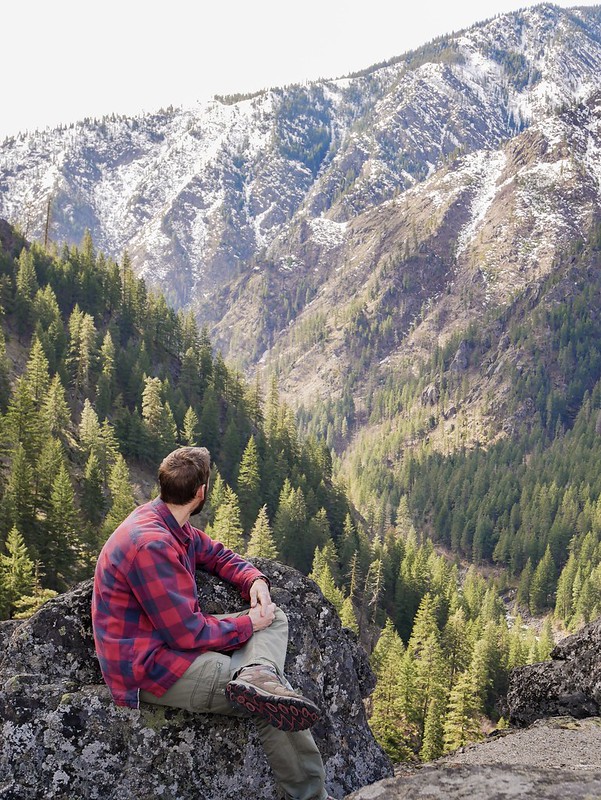 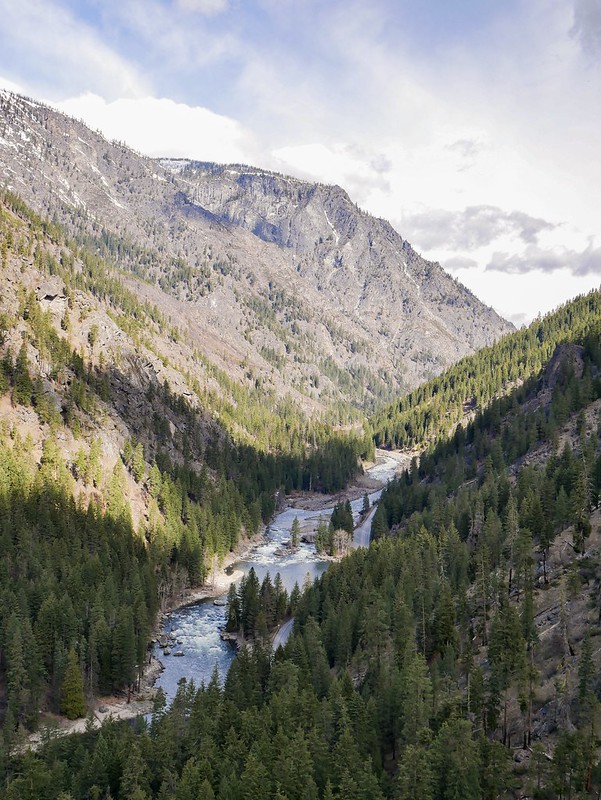 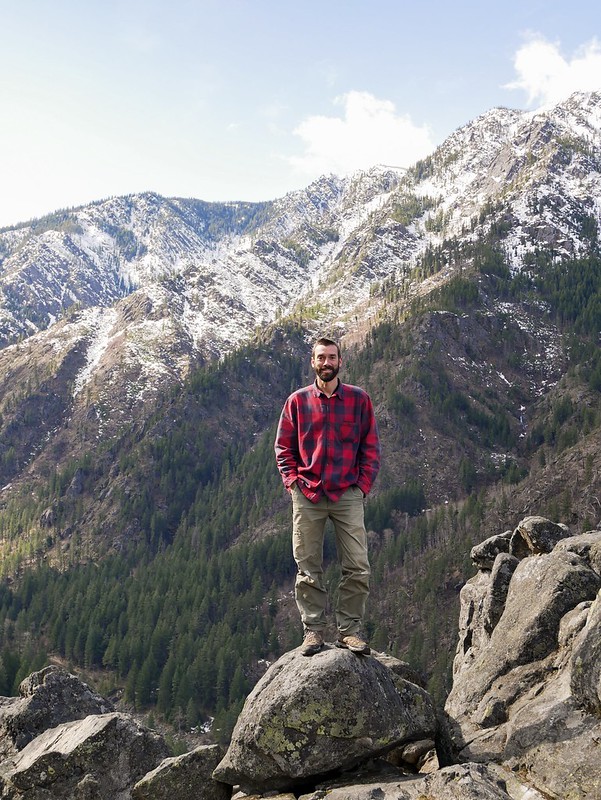 We continued on the road until we reached the bizarre town of Leavensworth. It was a Bavarian themed town in the heart of Washington and it really did feel like we were in Germany. The buildings were built in a traditional style and murals covered walls. Every business including big names like McDonald’s tried their best to blend in with the town and they all used the same font on their signs. The rest of the drive through Washington was rather uneventful, the national parks weren’t accessible due to snow so we continued down hill to the Columbia River gorge. The scenery changed drastically in just a few hours from alpine vistas to rolling green pastures and grazing cows. We’re hoping we can do more as we cross the border into Oregon but either way the plan is to head south to the deserts so the quicker we get there the less we will melt in the sun. 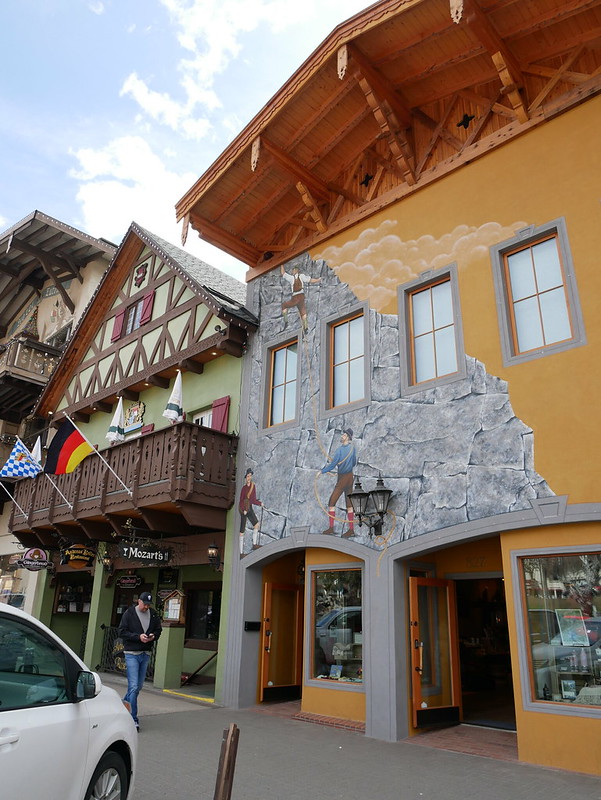 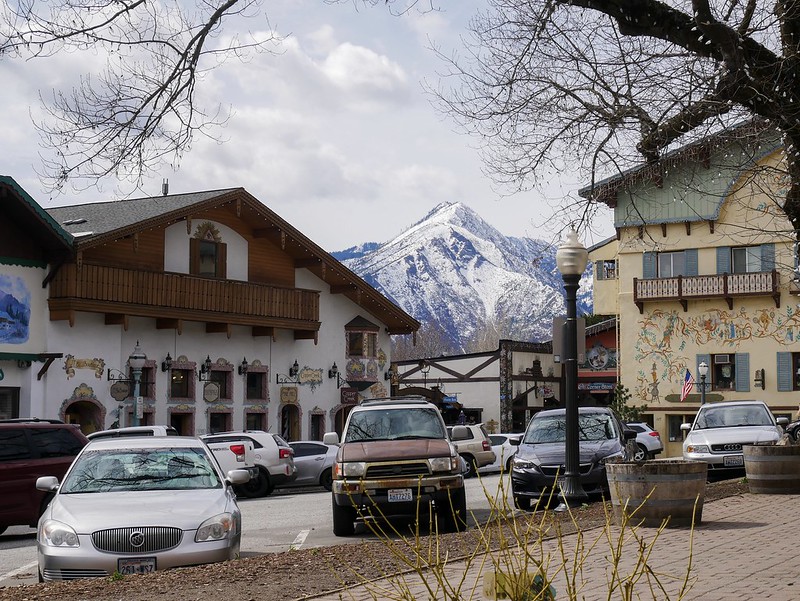