The sun pierced through the gaps in our curtains, waking us early so we could hit the road towards California. Our only plan was to head south to Lake Tahoe and we ended up on some very lonely roads. One of which had a sign for a ghost town 4 miles up a dirt road so we decided to give it a go. The road quickly deteriorated as we drove through a dense forest with tree trunks and branches covered in a weird fluorescent yellow moss. After a while the road became too rough for us so we headed back. On our return we came across a sign saying ‘windy for the next 4 miles’ which meant that’s exactly the distance to the main road and therefore the ghost town should be right where we were. There was nothing around but I got this horrible feeling that the road was haunted and in 4 miles the sign would appear again and we’d live our life doing this loop over and over.

As we got closer to Nevada the wind started to pick up and big flashing signs warned trucks and tall vehicles not to continue due to 60mph wind gusts through the valley. It was really shifting us sideways and Craig was battling against the steering wheel so we pulled up in a dirt turn out for the night. A big black cloud loomed above the valley and the setting sun turned it a burnt orange colour. 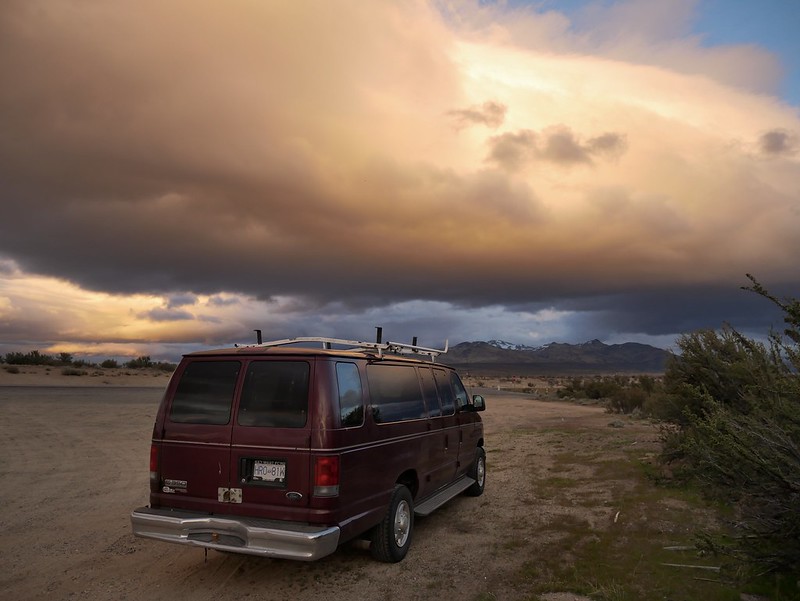 The next morning was overcast but the wind had calmed down at least. I don’t know why but this valley between Nevada and California really had its own wild weather system. Within a few minutes of hitting the road we were driving into a snowstorm. Big, heavy blobs of snow fell and quickly melted on our windscreen but there was enough of it to begin setting on the road. As quick as the weather turned bad, it became good again and we had scorching sunshine across the border in the city of Reno. The Sierra Nevada mountains made for an incredible backdrop but we were only hanging around to stock up on food before the final climb up a pass of around 7000ft to reach Lake Tahoe.

I’ve dreamt of visiting the lake for so many years, it’s shared between the states of Nevada and California and set in a deep basin surrounded by snowy peaks. We tried to visit in 2010 but the area had a record snowfall and the road wasn’t recommended to drive along so we had to give it a miss. Even as we headed there now in April the snow was piled up high along side the roads as we descended towards the lake. We headed to the less developed area on the east coast where the road skirted high around the lake. We got a few glimpses of things to come and eventually pulled up and hiked down to the shores. It was the first warm day of our trip so we excitedly packed a lunch to eat by the lake. 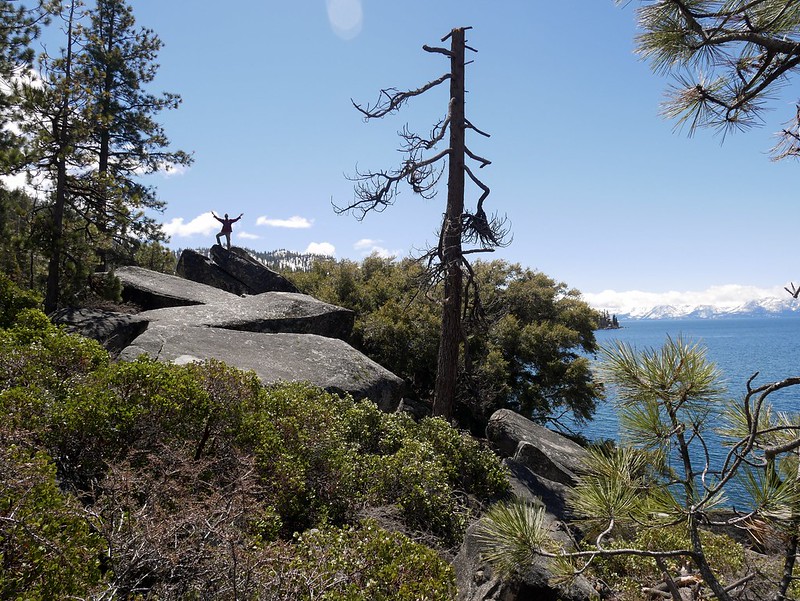 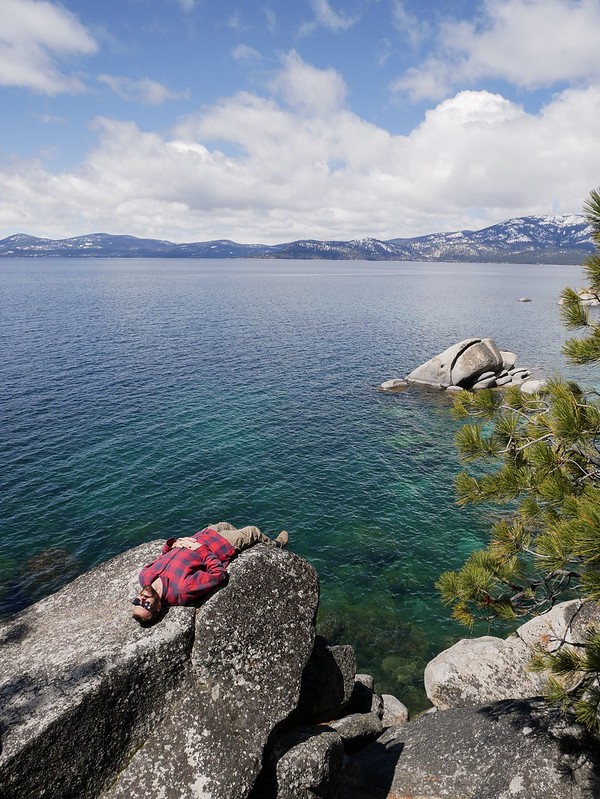 We got glimpses of the lake as we hiked through the forest, there were turquoise patches along the shore and our pace sped up to get a closer look. It was incredible. The lake was the most amazing aqua colour along the shores, giant boulders were visible through the water and deepened into navy blue like an open sea. Pine covered mountains surrounded the lake and the snowy peaks housed some of the regions best ski resorts. 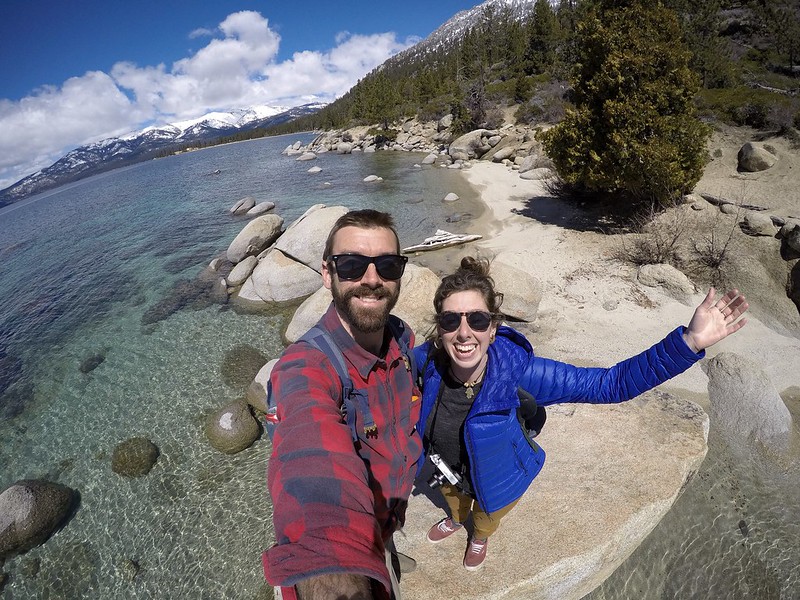 We found a perfect boulder to sit and have lunch and then we followed a path we found along the shore. There were amazing views down to shallow sections with water sparkling in the sun and it looked more like the Caribbean than America. 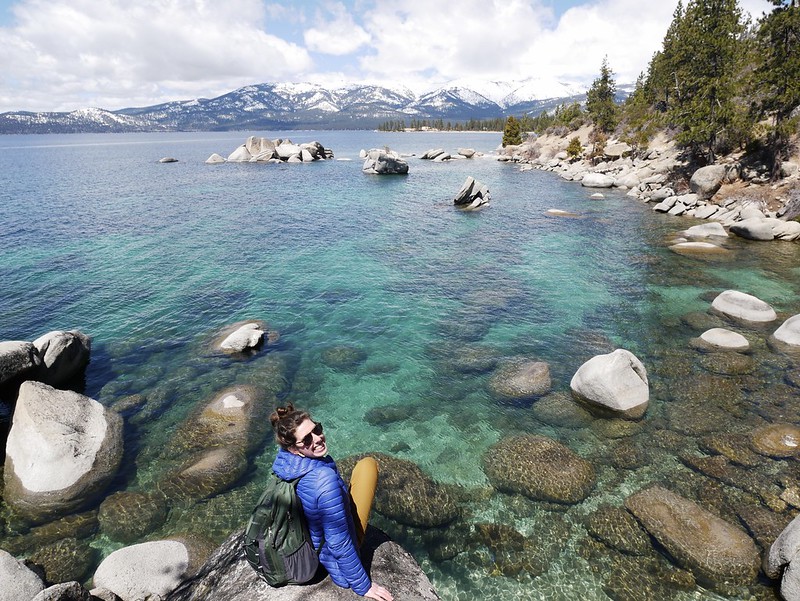 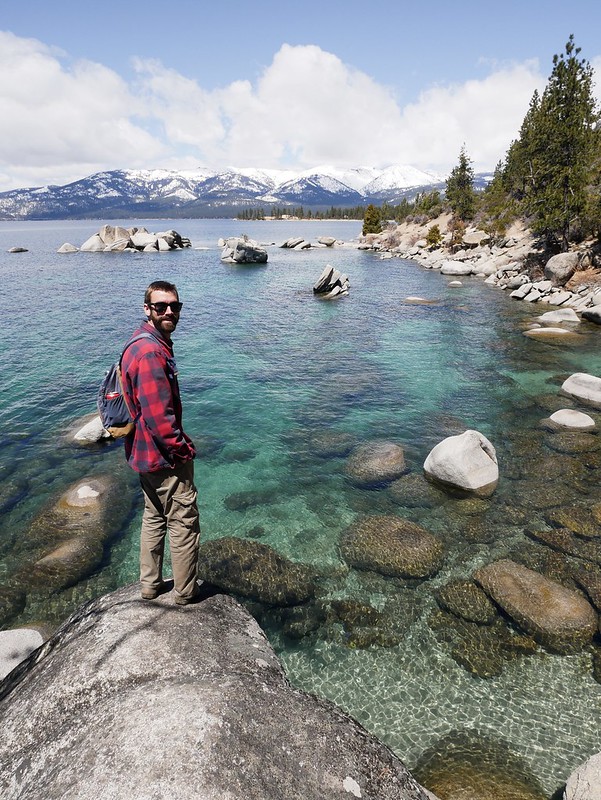 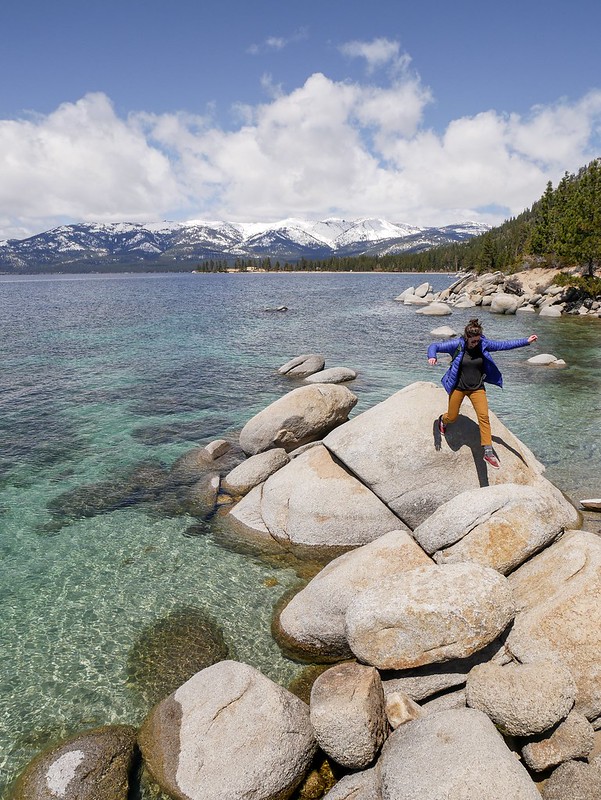 The extremely friendly staff in the Incline Village visitor center recommended a hike up the Tunnel Creek Road which leads to a very popular bike track. It gradually climbed up the hillside for fantastic views across the lake. It didn’t take long for us to reach the snow line though and a couple of locals we passed were shocked at how much there was. They said normally this time of year there would be bikers on the track. 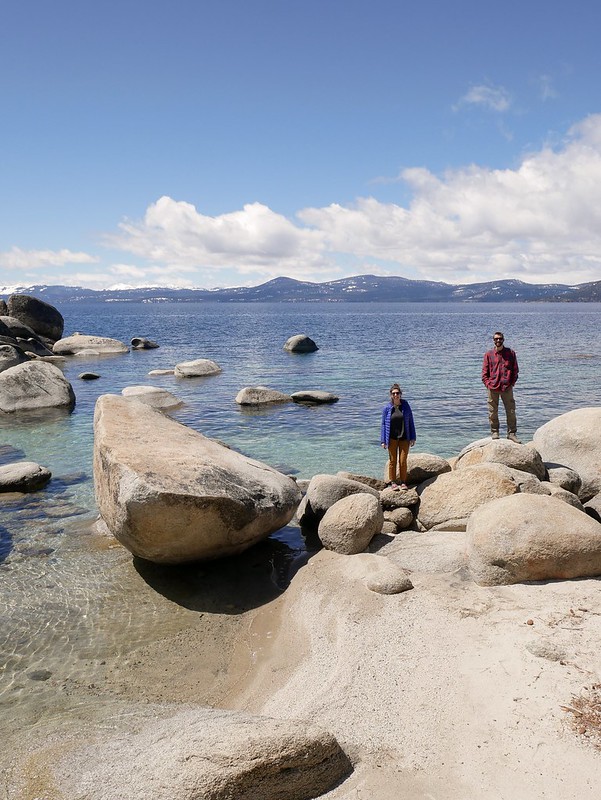 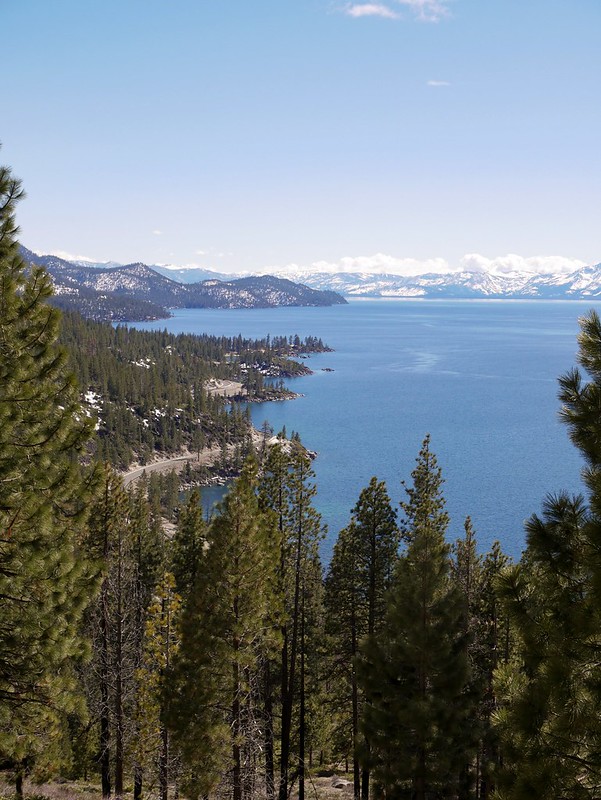 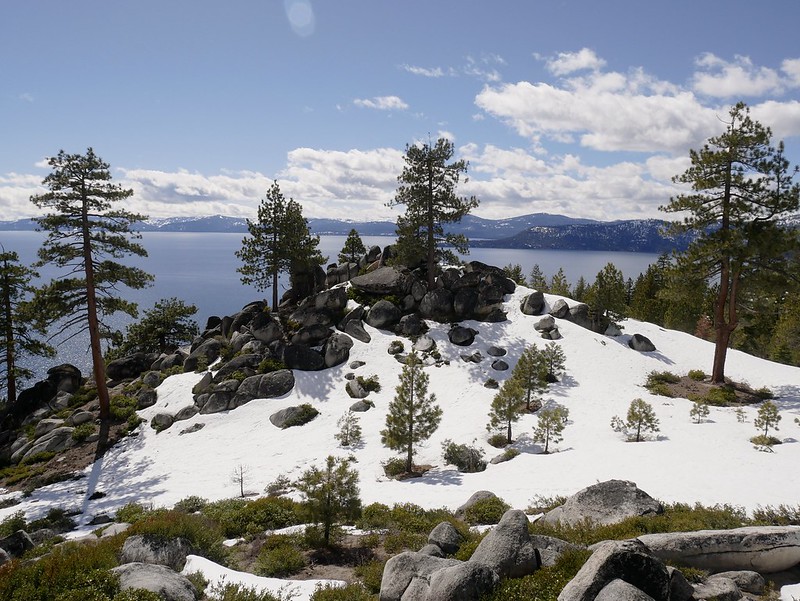 There’s very few access points to the actual lakeshore so we just pulled up in a lay-by for a cup of tea in the warm sun and then a different spot for dinner and to watch the sunset. We ate homemade quesadillas with the most incredible view and then we packed up and found a spot to free camp for the night. After our first comfortably warm day we had a freezing cold night ahead of us. The temperature dropped to about -4° and we woke to frost on the inside of our windows. But the sun was shining and the weather was due to warm up even more than the previous day so we were excited to finally get Roland Junior, our new inflatable boat out on the water. 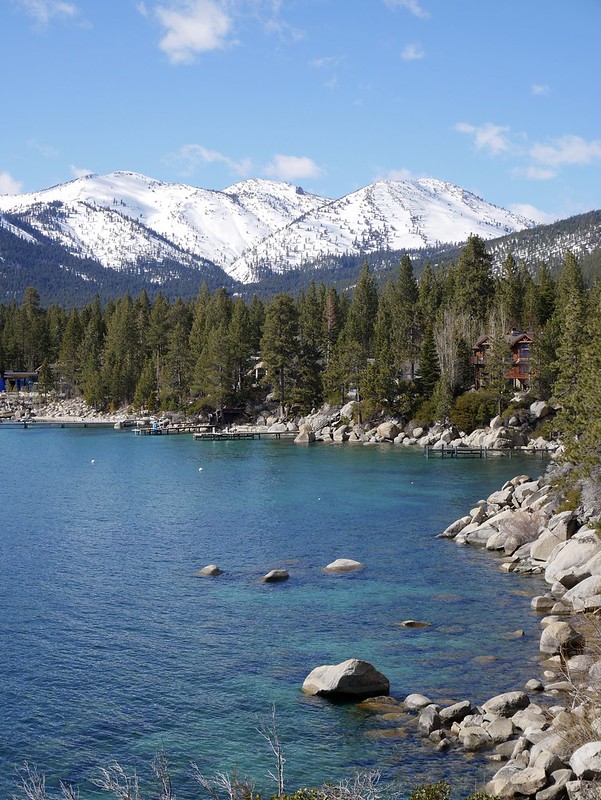 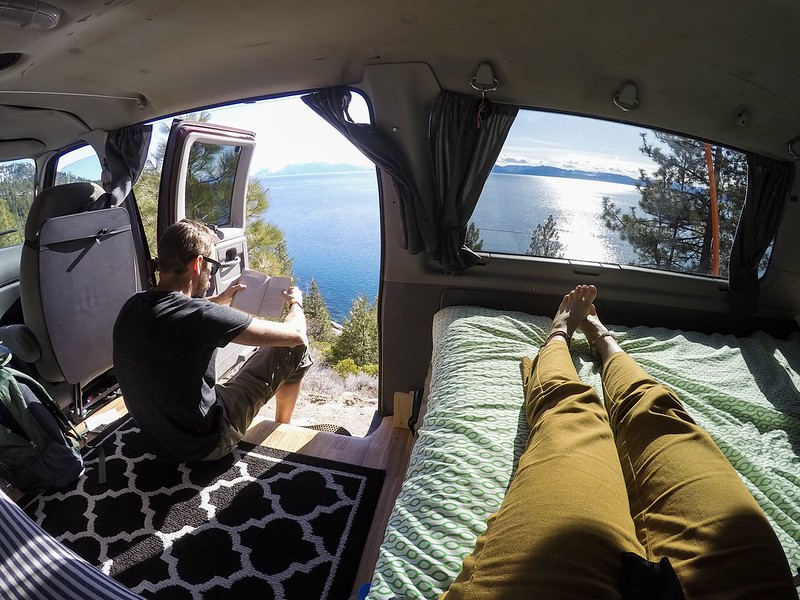 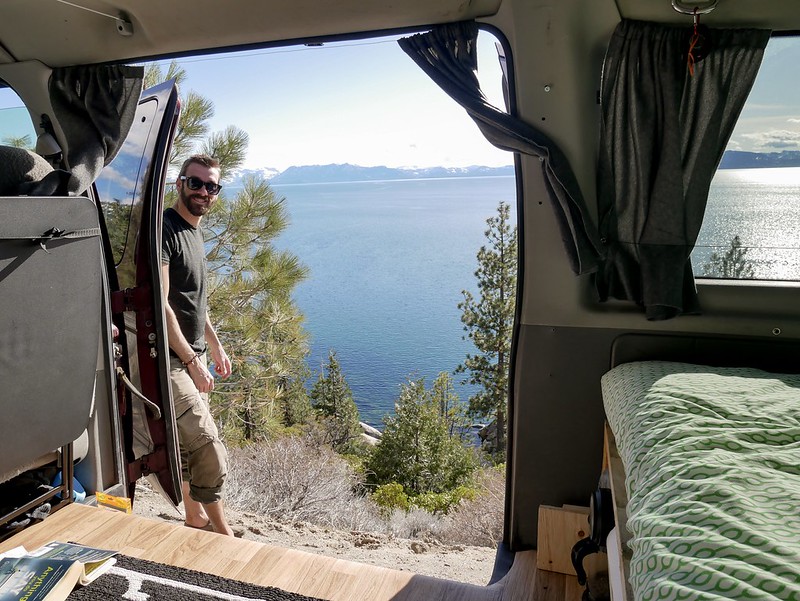 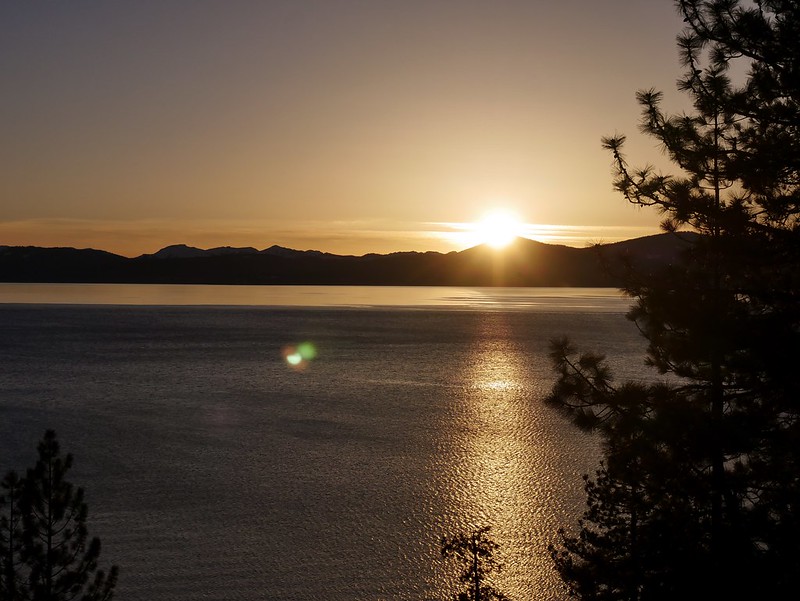 The only easy place to launch a boat, and generally access the lake and it’s beaches is Sand Harbour where a $10 day use fee is required. It was a perfectly calm day and pretty hot by 10am when we set off, but we didn’t know what the weather would do so we took thermals, rain coats, swimwear and a flask of tea just incase. 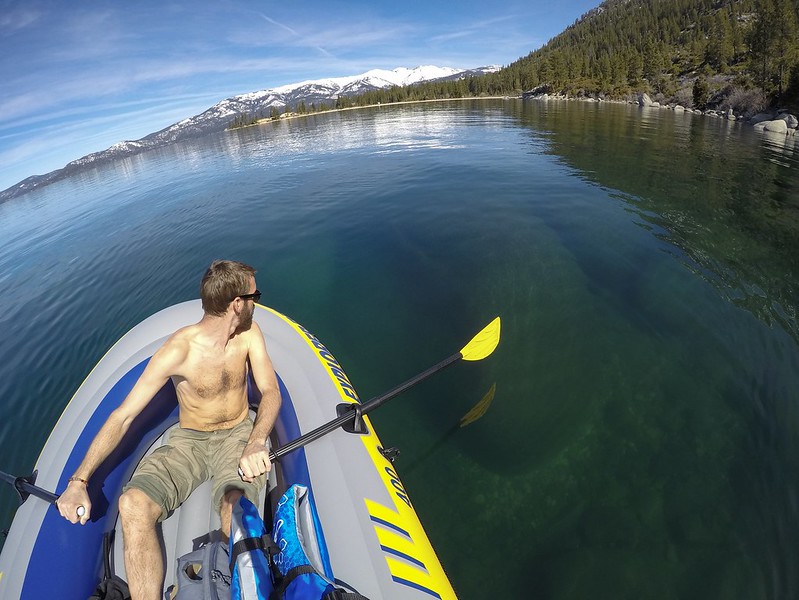 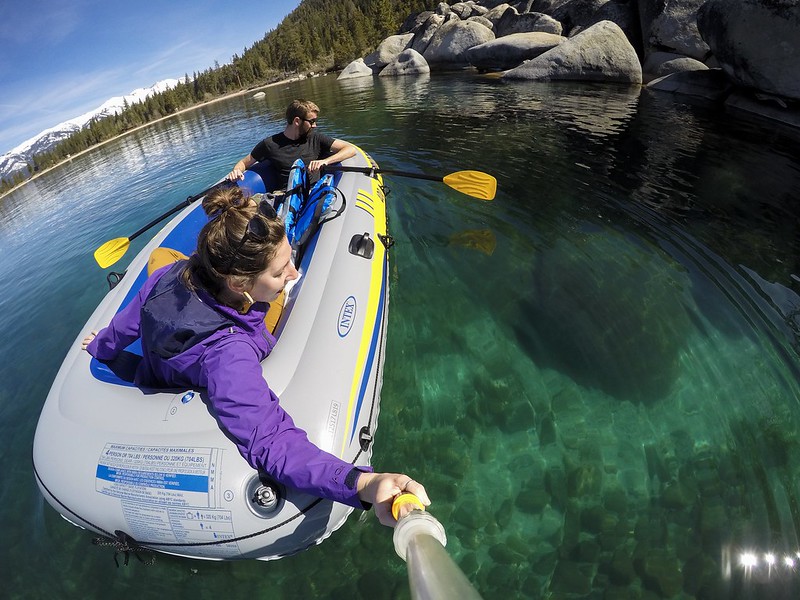 There wasn’t a farts wind and butterflies casually flew past us and landed on Roland for a free ride. Craig did all the paddling while I basked in the sun, rolling my trousers up and finally feeling the warmth after 6 months in a cold climate. We went along the shoreline where we could watch the boulders drift below us. Sometimes huge ones would creep up on us out of nowhere, they were as big as our van, probably bigger, so I was on patrol to navigate a safe path through them. It was great fun though and the water colour was mesmerising. Our plan was to find a beach to have our picnic on but the first one we found was in the shade so we persevered. It ended up being a very long trip until we found the perfect beach but it felt so good pulling up like we’d reached a desert island. 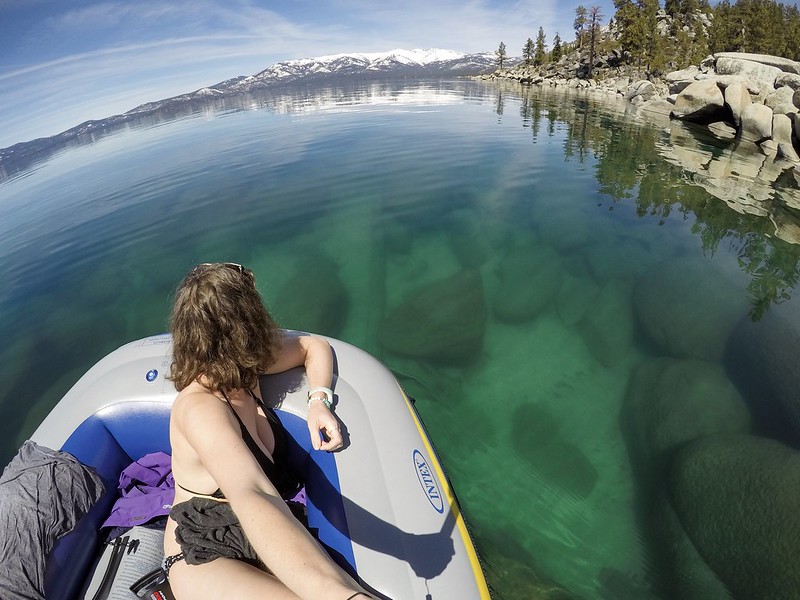 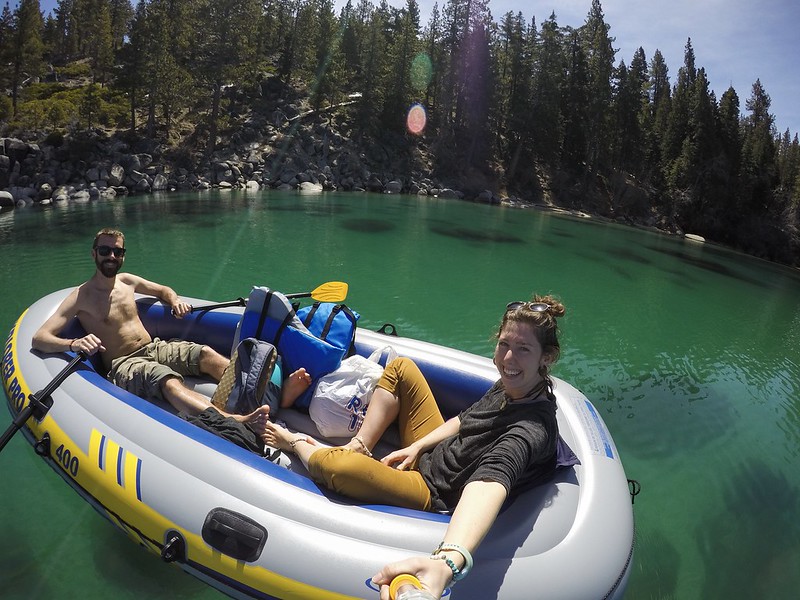 Bizarrely the beach had a proper chimney on it, like a house had burnt down and just the chimney was remaining. We were so hot that we went for a dunk in the lake and it certainly helped cool us down as it was bloody freezing and comparable to the arctic sea! My brain hurt and my fingers tingled but it felt so good afterwards. 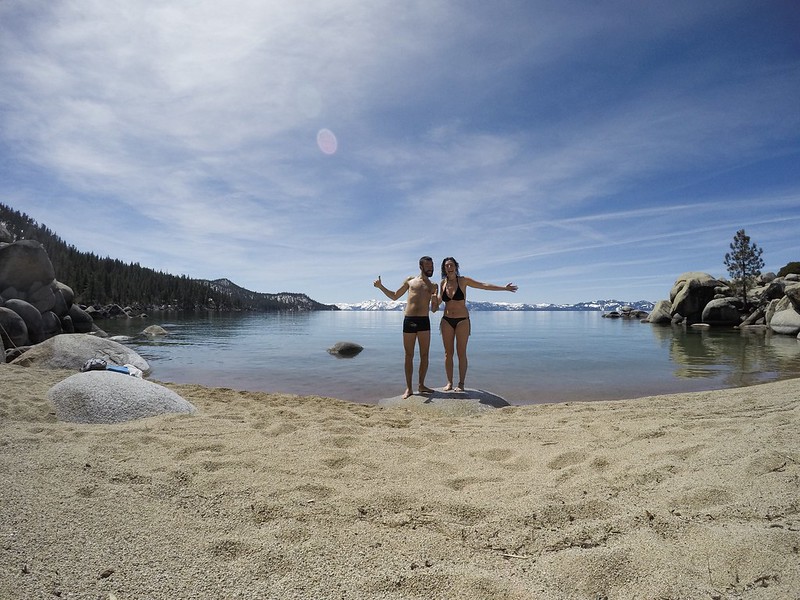 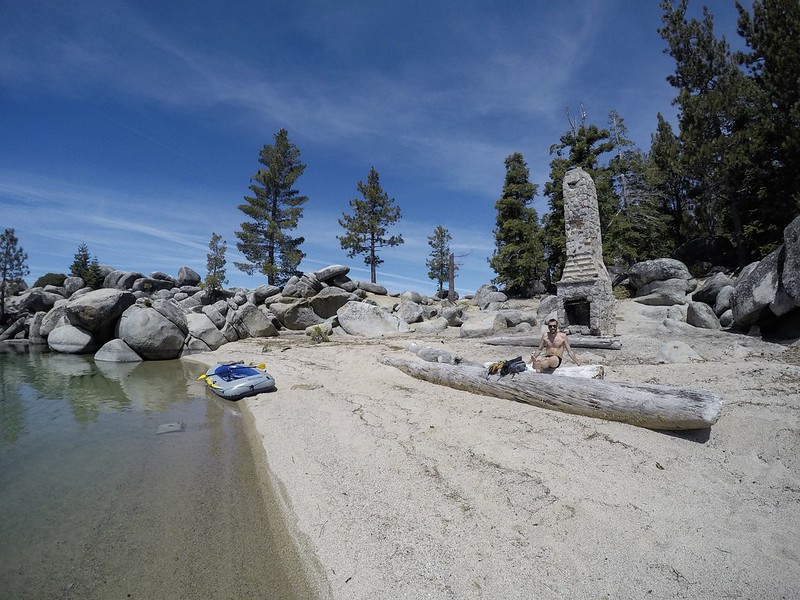 We enjoyed our lunch and then a dog walker came along the beach. He was on his phone and let his dog roam which was fine but the dog was massive. It was a German Shepard but the largest one in the world and probably a mixed breed with the worlds largest wolf. I adore dogs but I felt my blood race as he walked beside me with his head level with my hips. Then we panicked that he might jump in the boat and pop it with his claws or teeth so while the owner casually sat on a rock out of sight enjoying his phone call we were quickly trying to tie a rope onto a rock so we could push Roland away from the shore. The gentle movement of the water kept bringing it back so one of us had to stand and occasionally push the boat back into the water while the dog walked around us like we were food he’d been gifted but wasn’t ready to eat yet. 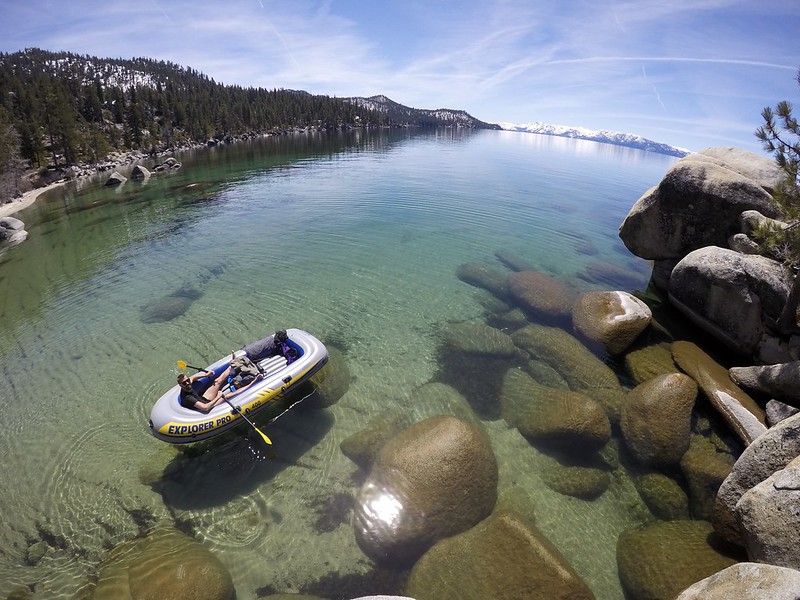 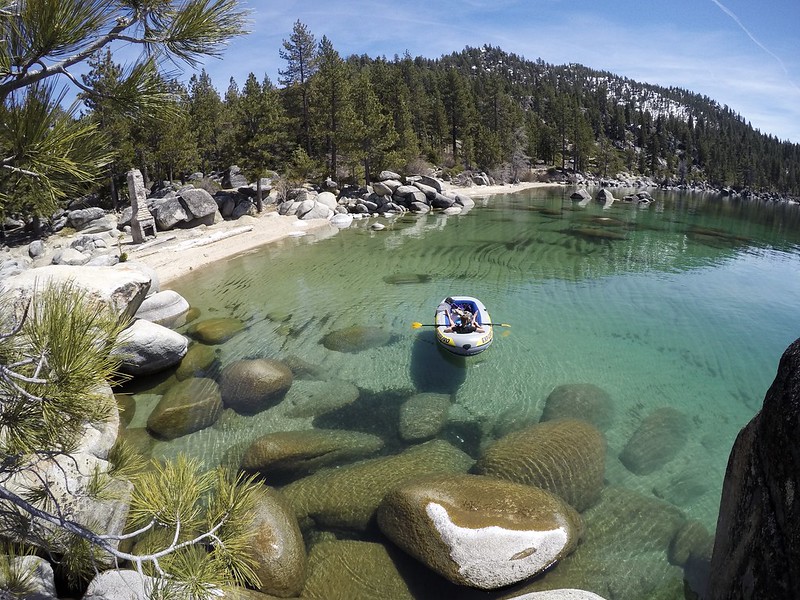 Craig looked quite red before we headed back out so we both covered up with clothes on the return journey. Suncream was the one thing we didn’t bring with us and geez did we need it. Craig ended up paddling us about 10km over four hours and when we arrived back at Ruby we could already see our sunburn brewing. As the day went on we got redder and redder, my shins had neat lines where I’d rolled my trousers up and my nose was bright red. Our skin really wasn’t prepared for that intense sun after so long without it, but it was definitely one of the best lakes we’ve paddled so we were still smiling! 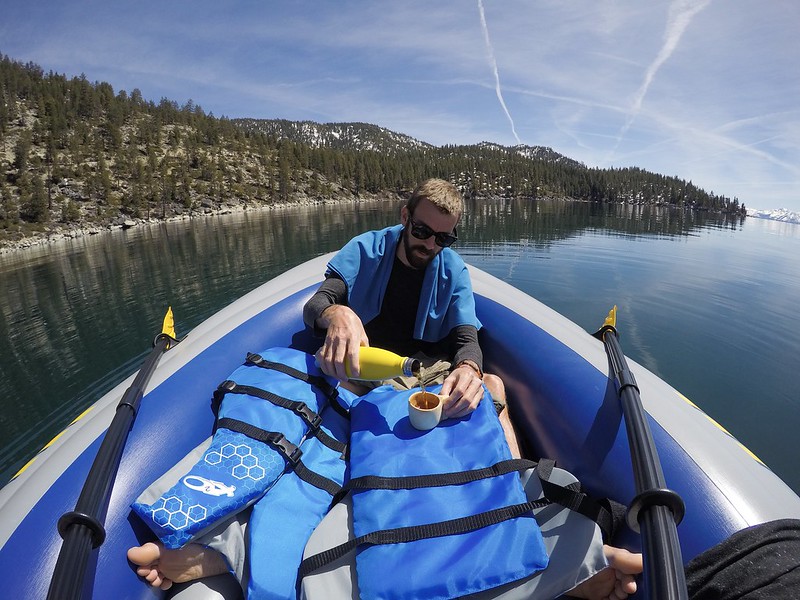 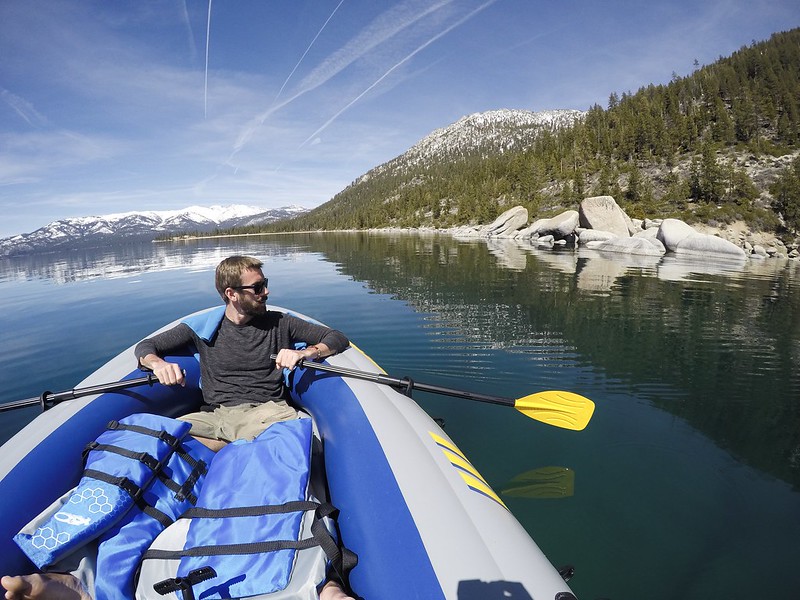 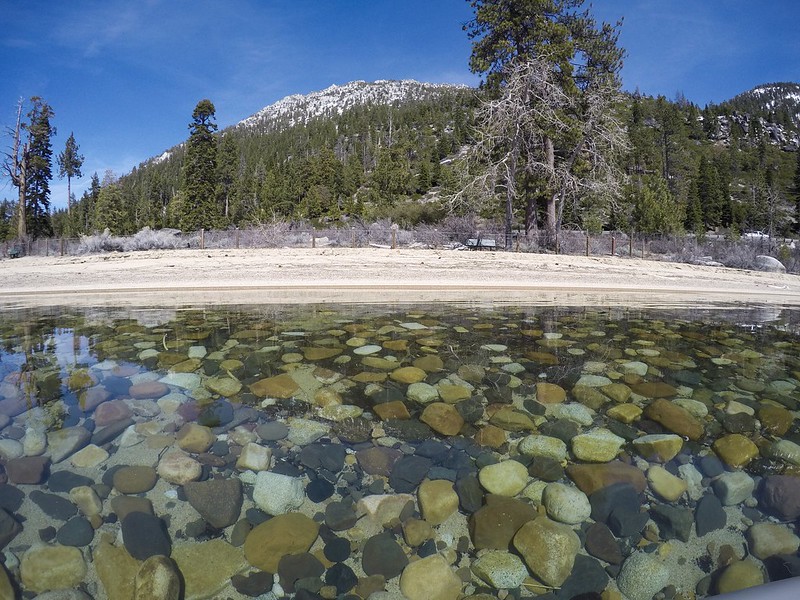 We finished the day with a drive to the southern area of the lake. It was completely different to the serenity of the north east high rise casinos, but we flew by and continued around until we reached Emerald Bay. I wanted to do a long hike around it but the snow levels were crazy so we could only view the perfectly curved bay from up high. A little island sat in the middle and the pine forested hills reflected in the calm water. We free camped in the area for one more night before continuing south to Yosemite. 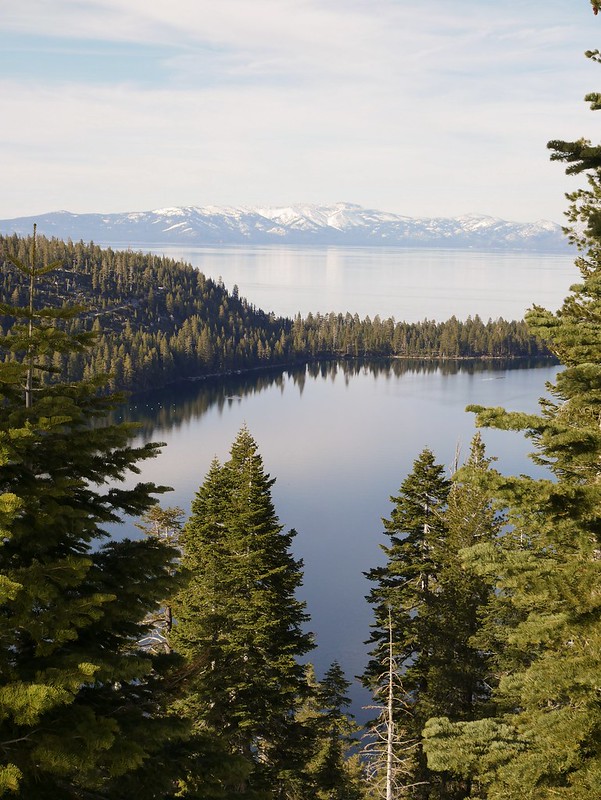 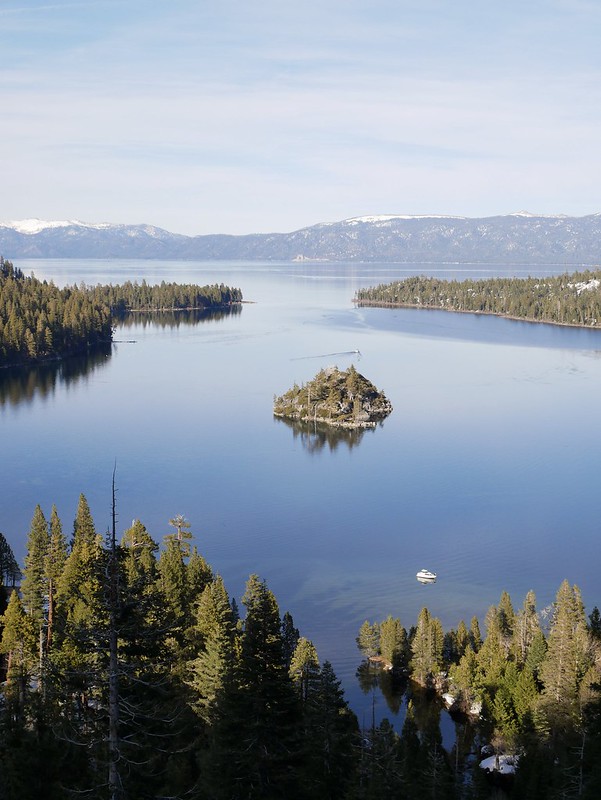