We parked our newly bought van along the busy street of our Airbnb and headed inside for a very late dinner. It’s the first van we’ve owned with an alarm system so that was comforting but it didn’t stop me worrying that we’d wake up, look outside and find it had been stolen. I literally felt like a parent arriving home from the hospital with a newborn baby and being so worried about protecting it. Just as we were about to go to bed the key for the van started beeping and vibrating on our table. We dashed to the window, naked but not caring – our baby could be in danger! Then we realised it must’ve been a car driving by too fast, the gust of wind shook the van and sounded the alarm. That happened three times during the night, giving me a hot flush of panic every time.

We were up at 6am unable to get back to sleep so we cracked on with the days jobs. We’d agreed with Amarjit, the previous owner that we could drive to his work place and use his tools to remove the interior of the van. He was based in the very fancy North Vancouver district where mansions were built amongst the hills like a new Hollywood in the making. He was constructing a new property with a crazy view across the city and sea – although I couldn’t help but feel happier living in a van with freedom than being stuck up a steep hill, reliant on a car to get me anywhere and the same view every day.

We borrowed a drill, crowbar and hammer and got to work. It was much tougher than we’d anticipated and the whole shelving unit was secured down with an absurd amount of nails and screws. It was very slow going and we couldn’t get the unit out in one go so we had to begin breaking slabs of wood off. Suddenly a bunch of very exclusive cars pulled up around us and the mansion across the road had an open house. The property was up for sale at CA$14 million…so it seemed kind of funny to be renovating a tiny home on wheels next to such a unnecessarily large home. 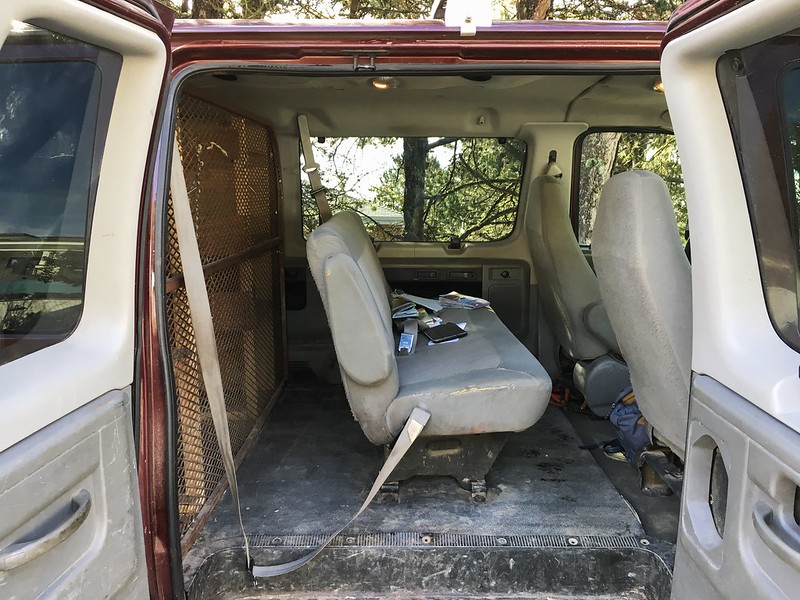 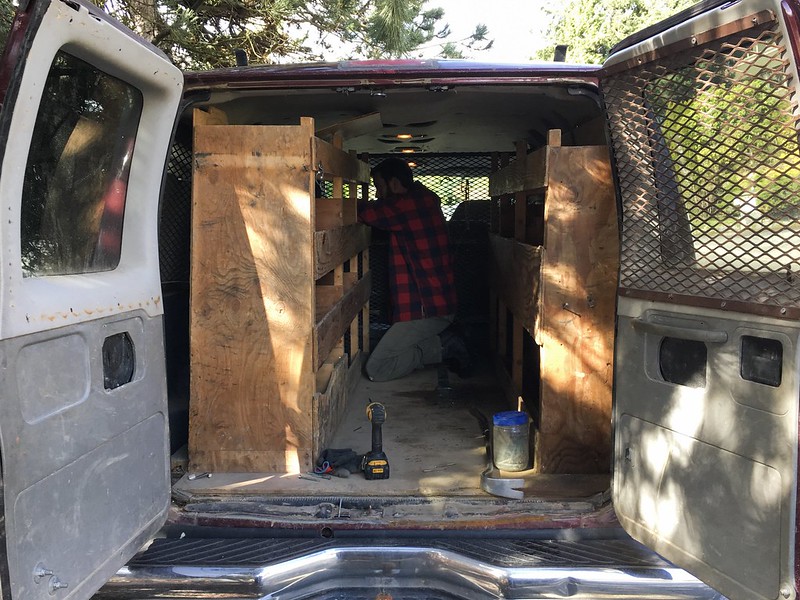 Amarjit and his work friends took a break to come and help us as we were clearly struggling. They made such quick progress, albeit they weren’t being careful at all like we were, it felt like we were witnessing a smash and grab of our own property. Within thirty minutes we had the shelving units out and soon after all of the caging around the windows. The van was nice and bright now and we had our empty canvas to work with.

We stopped at a gas station to hoover the shards of wood and dust out and then we scrubbed all of the interior clean. We made a base for ourselves in the Home Depot carpark for the next couple of days, returning to our Airbnb to sleep but all of the work was done in that carpark, under a fly-over from the sky-train to prevent us from getting too wet in the rain. 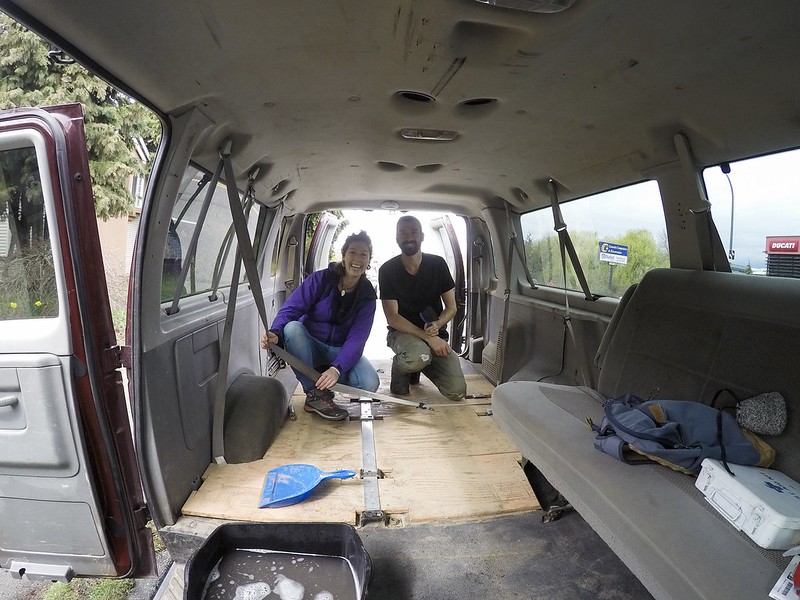 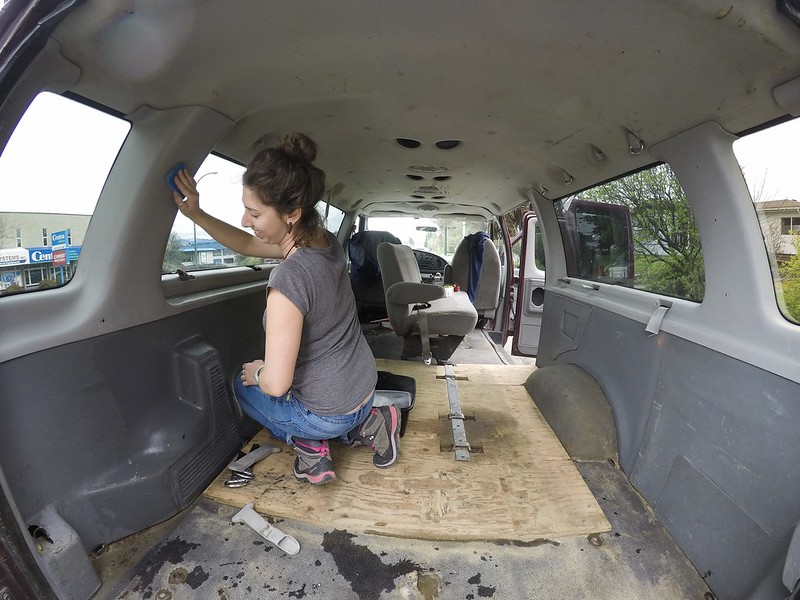 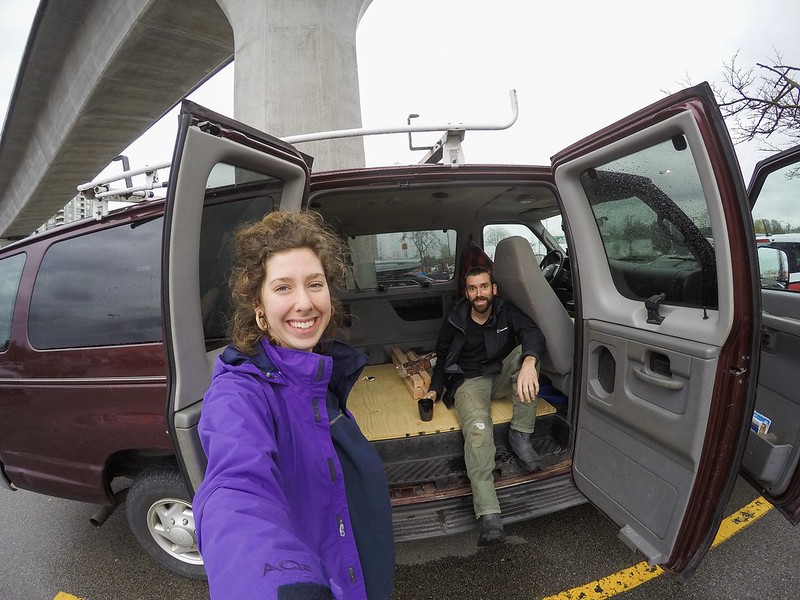 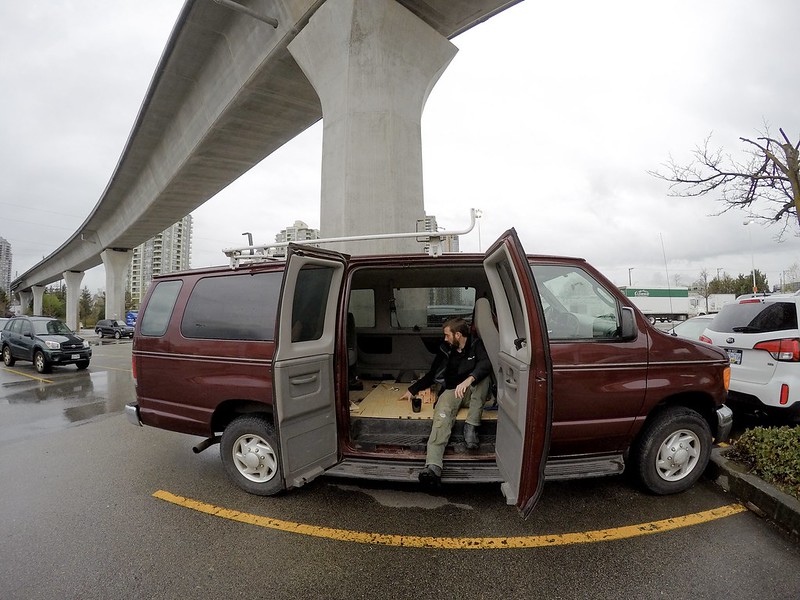 The biggest issue we had with the van was the big metal bars screwed in the ground to hold the passenger seats in place. We needed a special tool to remove them and we were reluctant to buy something for just one job. In the end we had no choice so we got the tool only to find some of the bolts were too old or worn to remove or we just couldn’t get the leverage to ease them out. It was a bloody nightmare, but we got two metal bars out, leaving two in the front and four in the back. The back ones didn’t matter, the bed would cover them but the front ones were a big problem, raising a couple centimetres above the floor. We spent so long scratching our heads, pondering the best way to deal with the situation. We could have gone to a mechanics and had them removed for $100 but we didn’t want to spend so much money on that. So instead we opted to work around the problem. 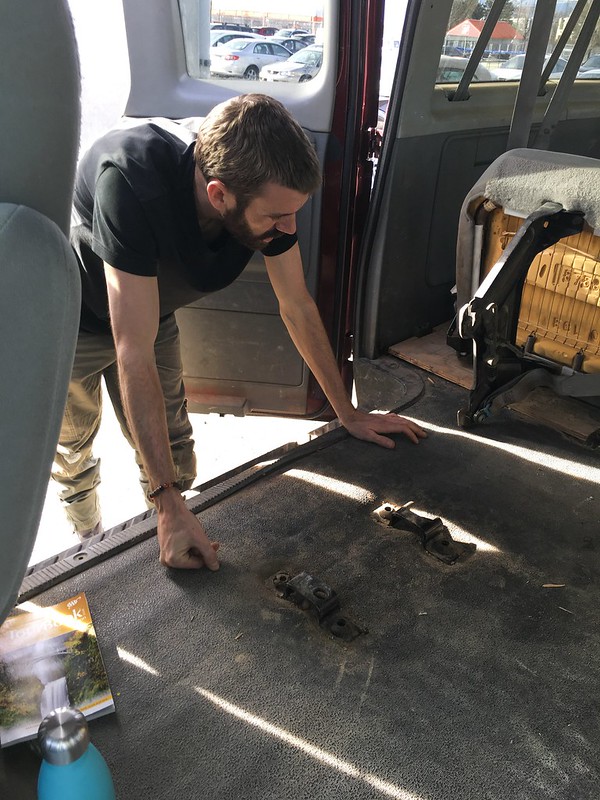 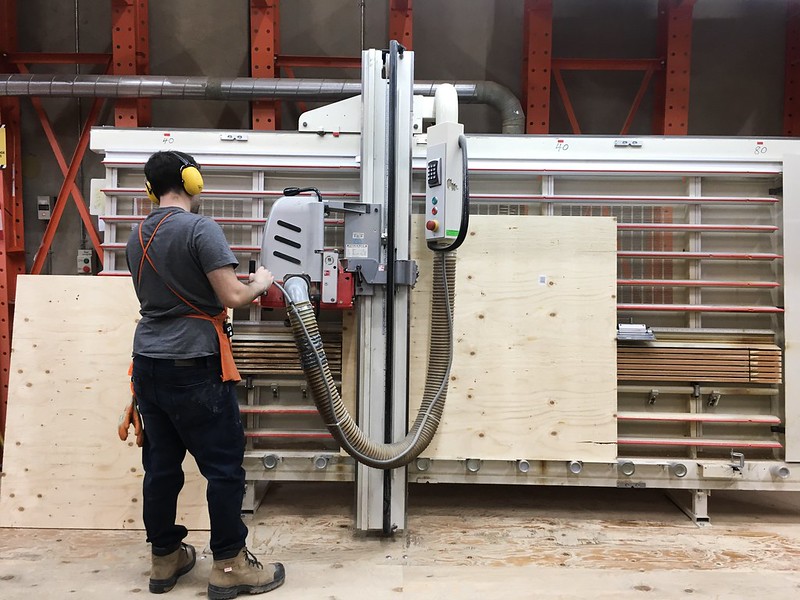 The front section didn’t have plywood down like the rear did, so we bought a thick 15mm sheet and had the nice staff at Home Depot cut it into three pieces. They generally do a few cuts for free so it’s super handy when you don’t have the tools. We placed the ply on the ground like a jigsaw puzzle, slotted around the awkward metal bars. Then we bought a thin piece of wood to fill in the gaps by the bars. It’s hard to explain but hopefully you can see what we did in the photos. We then screwed in metal plates to hold it all in place. To prevent the screw-heads damaging our future flooring we covered all of them with gorilla tape and a piece of old seat belt from the back of the van, only the finest touches in our home! 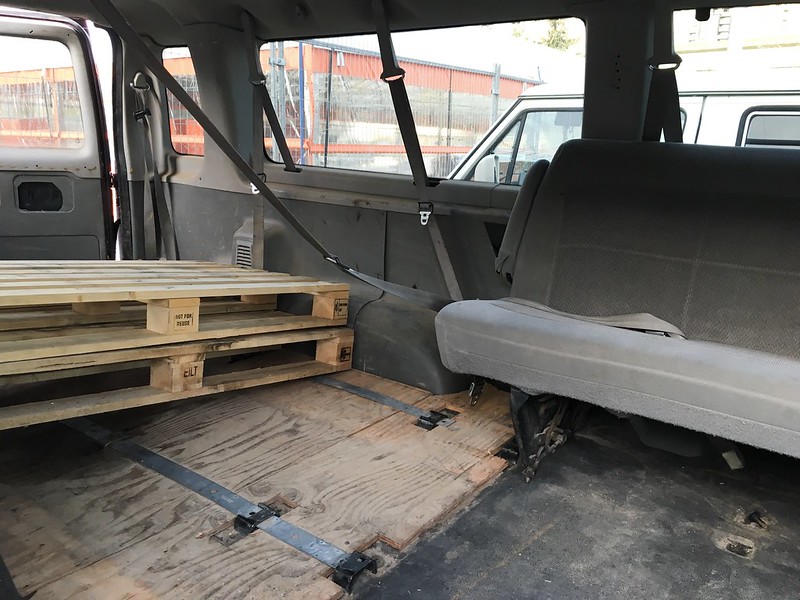 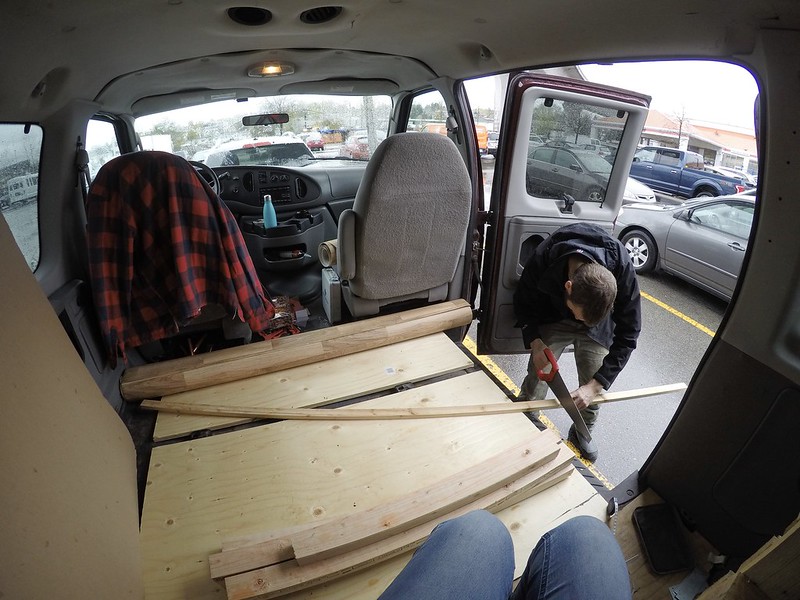 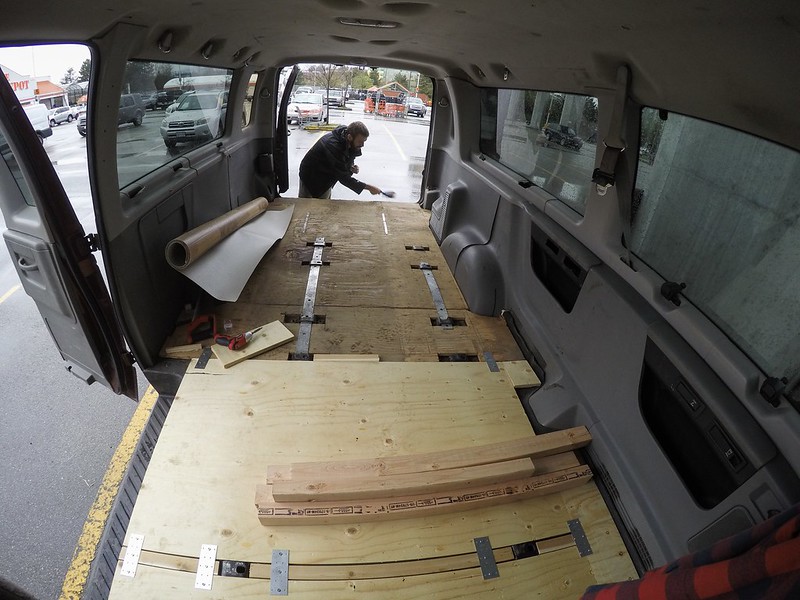 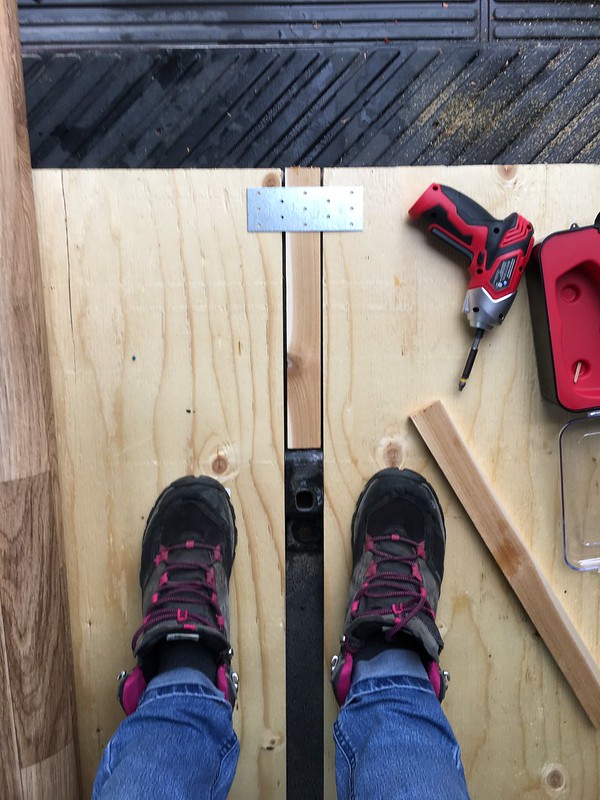 Now we had a relatively flat surface to work with, we could buy some vinyl flooring. We found some thin wood-effect vinyl for about $60 and it was nice not needing to be overly precise cutting around the curves of the wheel arches etc which made life easier. With the floor in the van it actually started to look homely. 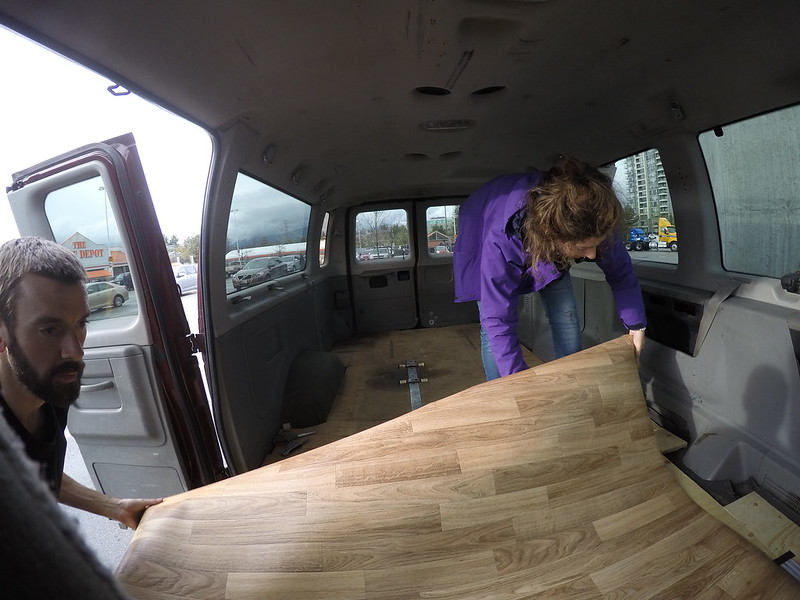 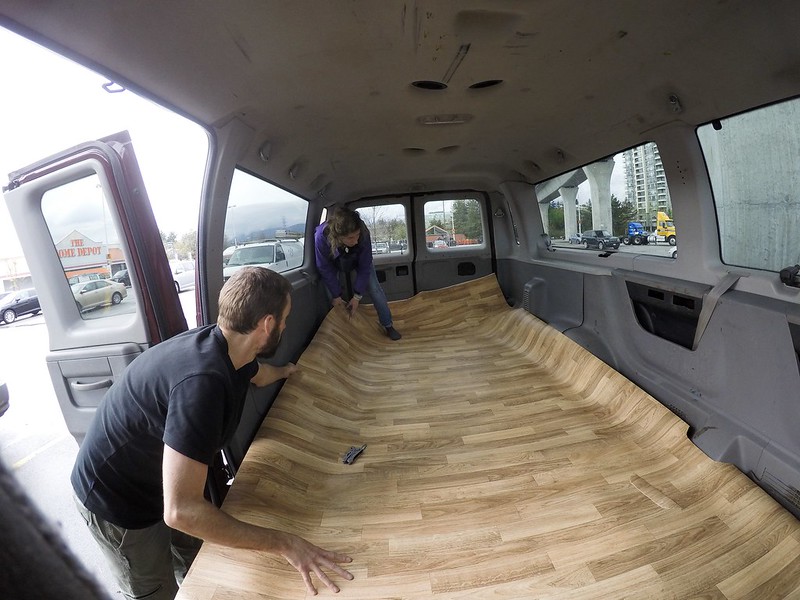 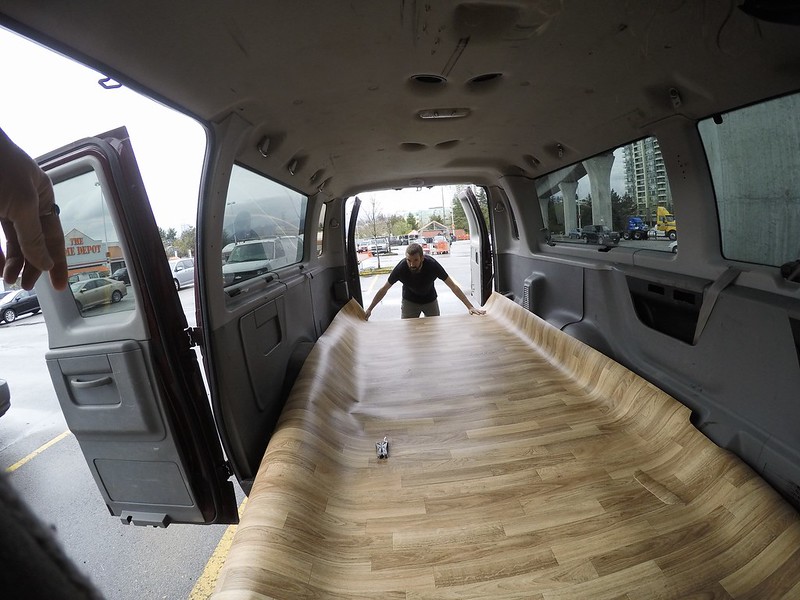 We made a very simple bed with wooden pallets we got from the back of Home Depot. One employee we asked said they didn’t give away or sell pallets while another kindly took the time to explain that some are kept as they get a deposit back but a huge pile of rejects at the back were fine for us to take. We managed to find two matching pallets in the scrap pile and then we needed to raise the bed up to create storage space and avoid the wheel arches. We got some off-cut wood for bed legs and bought a saw to cut them all to size and then we tried to drill them into place with our $17 Walmart drill. It had just about worked for the small screw jobs so far but this job was too hard for it, to be fair it looked and sounded like a kids toy so I’m surprised we managed to get any use out of it. 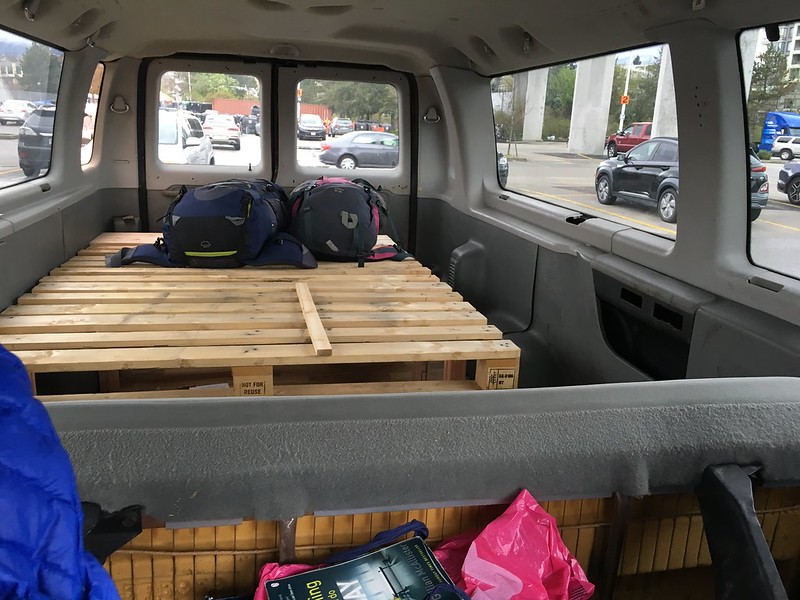 Home Depot rents tools so for $18 we could rent a proper drill for four hours so Craig headed in to pay, only to be told he couldn’t rent without a Canadian cell phone number or address. Weirdly the worker said he would let us use it for one hour for free. It seemed odd but we were happy and it was actually good to have a time limit so we didn’t dawdle. If we had four hours we would have probably taken that long. We screwed the legs into place and then a thin piece of wood along the base of the legs to give it all support.

The two pallets were slightly smaller than a double bed so we also bought an extra piece of thick wood and created a sort of bench to go at the back which would be a little bed-extension. We used the metal plates again to connect the two pallets together and more seat belt fabric to save our mattress from the screws. I didn’t take many photos of the bed stage as we were so limited on time.

That was the biggest projects out of the way, now it was time for the fun stuff – shopping. I was delighted that there was an Ikea in Vancouver so we headed there for all of our bedding, material, kitchen ware etc. They even had delicious veggie hot dogs for 75 cents so we ate a few too many of them. Craig moved the backpacks out of the van to make room for the new bits we just bought and then we headed back in for a final hot dog. When we got back to the van thirty minutes later I saw something on the floor behind our van and asked Craig what he thought it was. Without responding he ran to the van at lightning speed. It was our backpacks, he’d forgotten to put them back in the van and we were so lucky they weren’t stolen. Maybe it’s a blessing having shitty backpacks rather than a fancy suitcase. 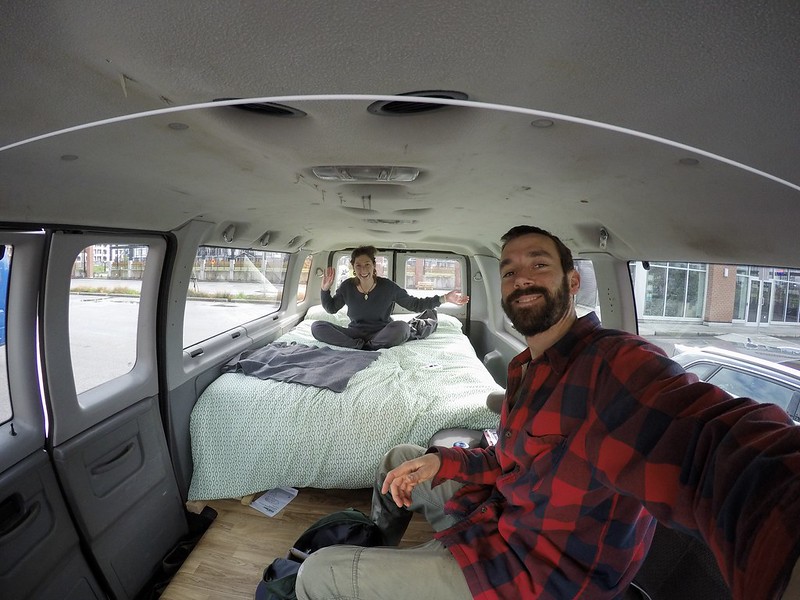 We bought our cooking stove in Canadian Tire and then a few little bits from Walmart. One big expense was our mattress, we wanted a foam one as they are lighter and in my opinion more comfortable but the ones in Ikea felt feeble so we ended up getting one from a foam shop with a handmade cover. We spent a day in a Walmart carpark, cutting the fleece throws we bought for our curtains. They were only $6 each and super handy as they don’t fray when cut and are simple to sew. While I hand sewed a line across the top of each curtain, Craig connected some picture-frame wire above the windows and it turned out to be a great little trick. The wire was flexible so we just twisted off the ends around any screws or bolts near the window frames to keep it tight. The curtains hung out from the windows a little so Craig drilled some hooks between each window and tied elastic to them. It was the perfect fix as we could tuck the curtains behind them and keep the light out. 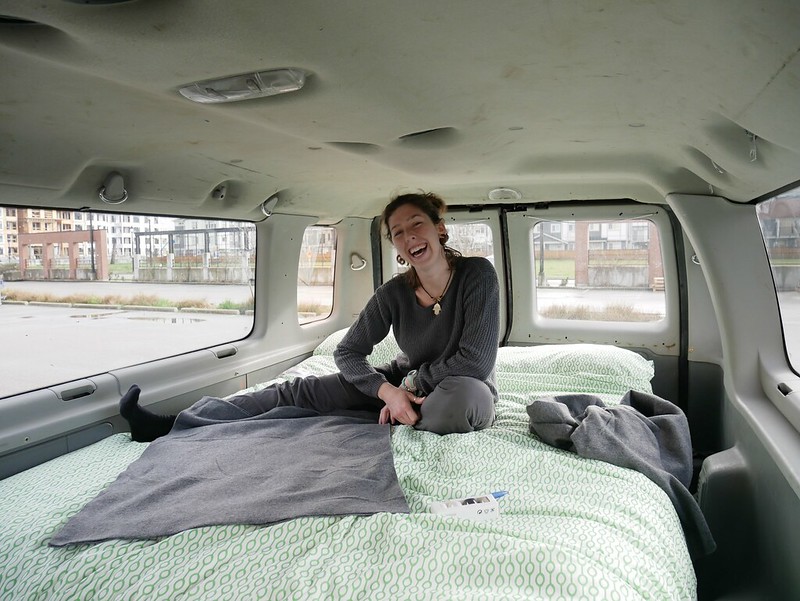 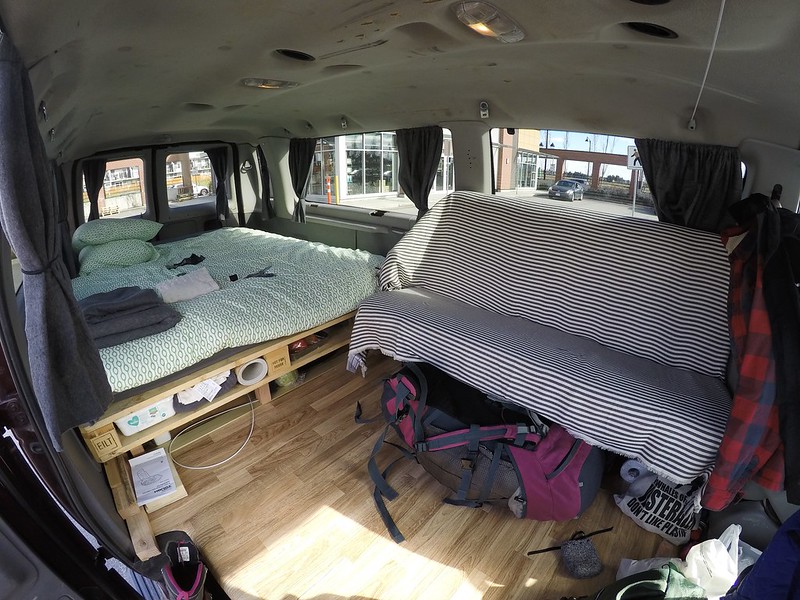 We used a ratchet strap to secure the old passenger seats in place and thus creating an idyllic lounge, and then we covered it in a fancy throw. The whole conversion took four full days and in that time we named the beautiful van Ruby. It was time for us to hit the toad and head into the USA, let the road trip begin! It’s also worth noting this was not a sponsored post by Home Depot but imagine all the tools we could buy if it was… 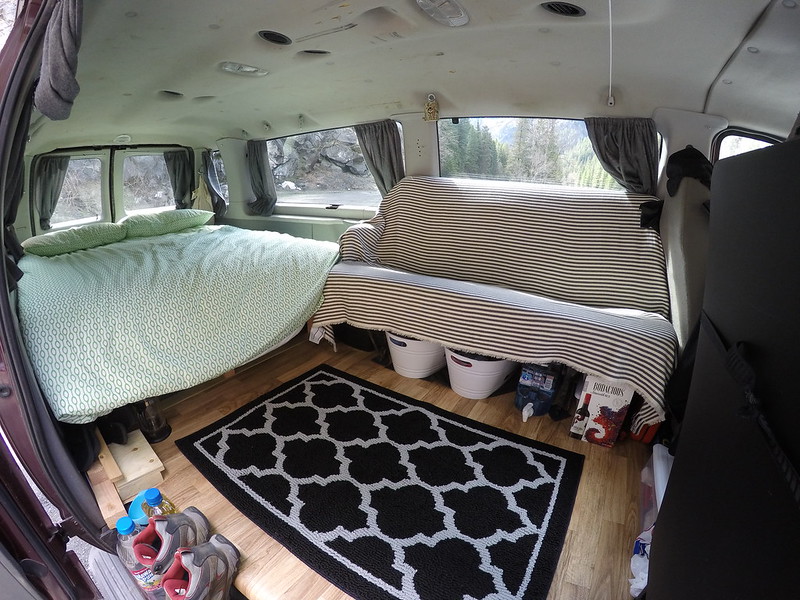 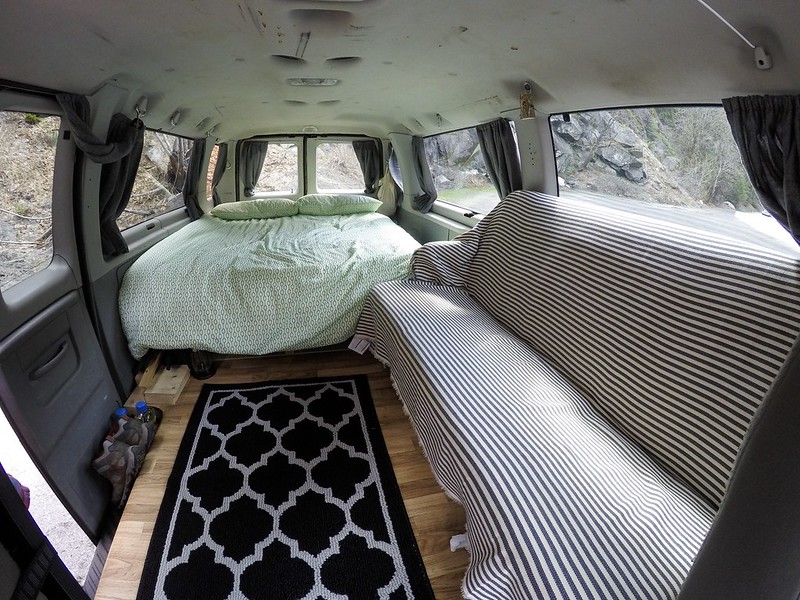