It was a hell of a journey to get from Northern Norway to Vancouver, Canada. We caught practically every mode of public transport possible and spent 6 uncomfortable hours laying on a hard, cold floor in Oslo airport. When we arrived in Seattle the airport was a shambles, immigration took nearly two hours and we were questioned about how we could afford three months in the USA without working and why we didn’t have an exit flight. But we got through, only to enter the worlds most chaotic baggage claim. The conveyer belts were chocker-block with bags and there was so little space that luggage from our flight was piled up on the floor. There were crowds of people everywhere so we zipped through with our backpacks on as we were running out of time to catch our pre-booked bus to Vancouver. We asked how to exit and were led to a man across the hall with a sign saying ‘end of line’. Then we realised the crowd of people was in fact a disorganised queue to exit!! As we followed the snaking trail around the baggage claim the queue grew larger until it doubled in size and the man with the sign was parallel with us. Just to give you an idea of how disorganised it was, someone asked him where the end of the line was and he said “I’m not sure anymore” and we watched him cluelessly try to solve his own mystery, walking around the room aimlessly while people followed him and his sign.

Finally we exited the airport but we only had 45 minutes until our bus departure. We speed walked about 1km with our heavy gear to the sky train in the sweltering heat. Ok it wasn’t exactly hot but it was sunny and 15° which was a bit of a shock after leaving Norway in a snow storm. With seconds to spare we arrived at our stop, ran across the road and straight onto the greyhound bus, phew!!

We had an equally as questioning border guard when entering Canada, and as we got back on the bus I checked our stamps and realised Craig wasn’t given one. The lady was so busy interrogating us that she forgot to stamp him in – luckily I noticed in time. By the time we arrived in Vancouver it was dark and we were starving, we’d been travelling for almost 40 hours. We headed to the nearest McDonalds and we literally felt like aliens on another planet. After living in a village of just 25 people we were suddenly surrounded by people and it was a shock, especially seeing so many homeless. Lots of them came in to steal drink from the soda machine but one was very jolly and excited to introduce himself to us. We must’ve looked like shit after our long journey because he was trying to sell us a makeover and showing us a brochure of the transformations he’s done on previous clients.

When we reached our Airbnb we showered and melted into a king size bed for only £22 a night. My collar bone was swollen from carrying my backpack and my eyes drooping from the tiring transport – but we made it! As soon as we woke up the next day (at 6am!!) we started searching for a new van to call home. We emailed and phoned numerous people and then we waited to see what was still available. Lots of the vans were uninsured so we couldn’t even take them for a test drive which narrowed down the search a lot.

That evening we heard back from an English guy selling a truck-camper. We’ve only bought vans before so this was a new idea of ours. It’s basically like a mini RV strapped down to the boot of a pickup truck. We headed across the city to view the beast, and I use that word lightly.

Somehow we ended up on a road parallel to where we had to be so Craig took a shortcut which I told him looked like private property “nah it’s fine” he said, and then we ended up in someone’s garden. Craig casually jumped down a wall into the neighbours driveway and walked onto the correct street like it was a normal route to take. I followed suit but I didn’t anticipate the wall being so high, it was about 2 meters (Craig seems to think it was just 1 meter though) and as soon as my feet touched the floor my legs gave way and my knee smashed into the ground. To be fair Craig quickly ran over to see if I was ok but I was so embarrassed I just got up and brushed myself off and then he started questioning how the heck I managed to fall. I blamed it on jet lag and my body rejecting the idea of trespassing. We arrived at the red truck and it was massive, a mighty American pick-up truck with 5 seats and an unnecessarily large bonnet. The camper part sat inside the truck like a snail with an excessively large shell on its back.

The English owner was a lovely chap who’d taken it around the states for a snowboarding holiday. We were shown the camper first, which had no ladder to it and I could barely make it up on a normal day, let alone with my injured knee. Craig saw me struggling to climb up as the perfect opportunity to tell the guy about my accident. He began describing how he took the wrong route but casually jumped down a wall and before he got to the part about me falling the guy cut in and said “ah nice, a bit of city parkour” at which point I looked down at my ripped, bloody jeans and replied “not quite…I didn’t make it”. 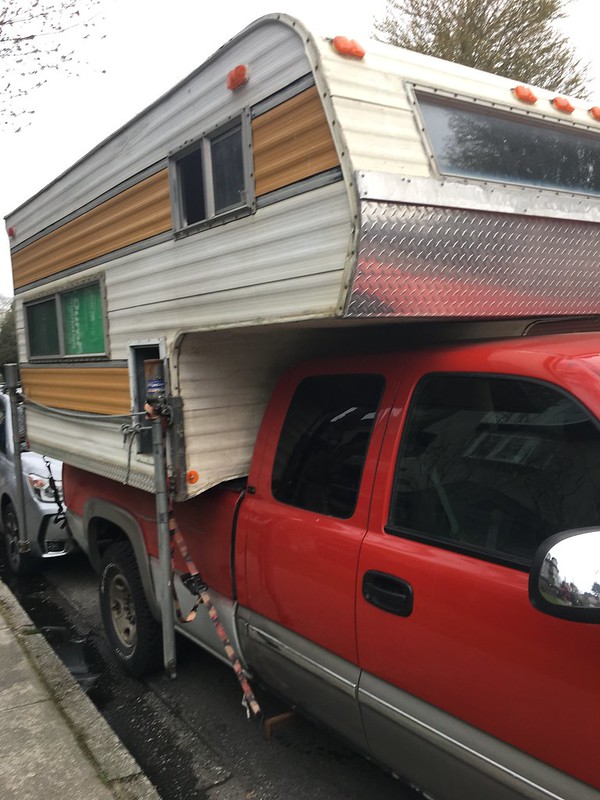 The camper needed a bit of love inside but with a clean up it was ready to move into. We had to check the truck driving it was good though so Craig turned the engine over and boy did she roar. It sounded like an 18 wheeler truck thanks to a missing part of the exhaust. I was sat in the back for the test drive, feeling very safe beside four large gas tanks. The narrow roads were pretty nerve wracking to get around with such a huge vehicle but she ran well enough. We thanked the chap and headed back to our Airbnb to discuss everything. Luckily we both had the same opinion – it was just way too big and boisterous for us, we wouldn’t be stealthy at all, we’d struggle to park in small spots and we’d generally feel oversized wherever we went. So we continued the search.

The next day we agreed to view a 2006 Ford E350 van. It was a lovely burgundy colour with windows all around but currently being used by builders. The interior had cages across all the windows after the owner was robbed of all his tools, and wooden shelves were fixed in place. It was a big project for us seeing as we were in a new city, without friends or family to help and absolutely no tools but we could see the potential.

We gave the van a test drive and she was perfectly silent, gliding quietly down the roads yet packing lots of power on the highway. It was only day two searching so we were shocked to find the dream van so soon. The only downfall was the price, it was a lot more expensive than our previous vans, but then again it was also the youngest and biggest. We tried bartering on the price but he barely budged. In the end we knocked him down a couple hundred, which was still more than we wanted to pay so we made a deal that he would help us remove the interior or let us use his tools to do it ourselves.

We met later that evening to sign the documents. The owner was a nice chap from India and his friends came along with him. As soon we arrived at the desk however, one friend asked me for the money upfront and I politely said we’d wait until the paperwork was finished. It made me feel pretty uncomfortable but in the end it was fine, we swapped the keys and the money back at the van and we were the proud new owners. I’ll write about our transformation we did in just four days in the next post. 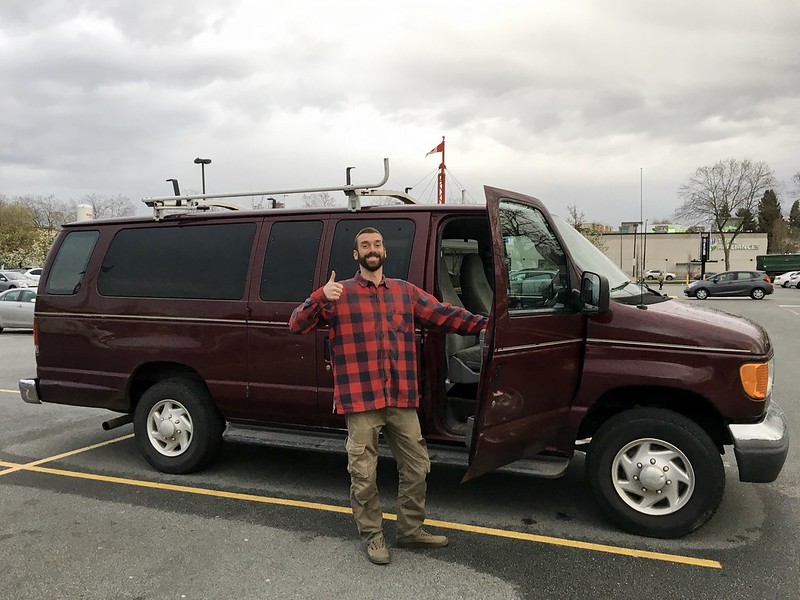 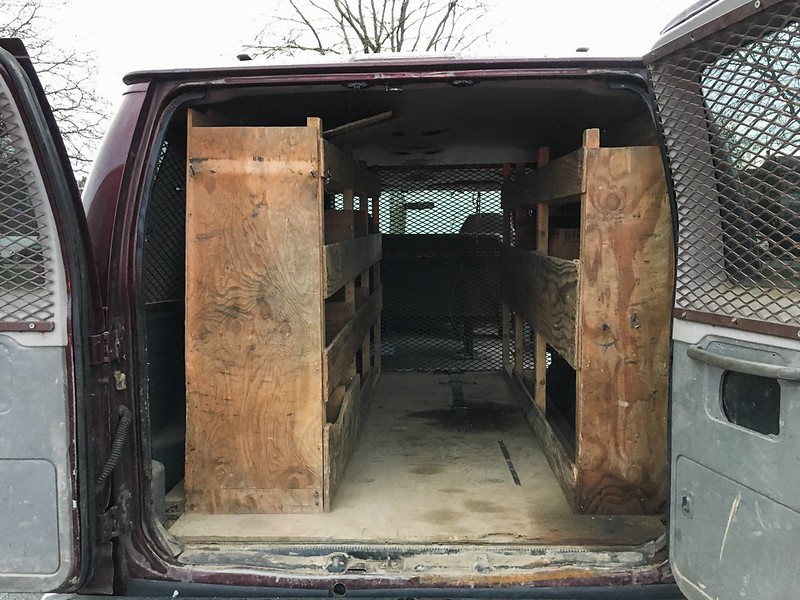