After almost four months working in Norway it’s time for us to head off and get back to travelling. We‘re heading to Vancouver Canada, to buy a new van so we can do our third roadtrip across North America. We haven’t lived in a van since our Alaska to Florida trip in 2016 so we can’t wait to be back on the road as it’s without a doubt our favourite way to see the world. I’m a little apprehensive (as always) about finding a reliable van and in a short amount of time but we will have to wait and see what we find.

This time around though we’re happy to leave Norway. It’s still one of our favourite countries in the world, the wild landscapes and ever changing winter colours are enough to steal anyone’s heart but we ended up feeling quite unhappy this time round. The weather wasn’t as good as last years never-ending sun and frozen ground and we actually received a lot of rain and wind which was miserable. We also felt trapped living at the end of the road, there were very few places we could walk to so we quickly became bored with our limited options. Plus we only managed to get out and explore by car on three occasions and that was in our final month by which point we already had cabin fever. But the experience was an eye opener and we’ve realised that albeit sticking to your principles is the right thing to do, it certainly isn’t the easiest path to take, but hey, you live and learn. 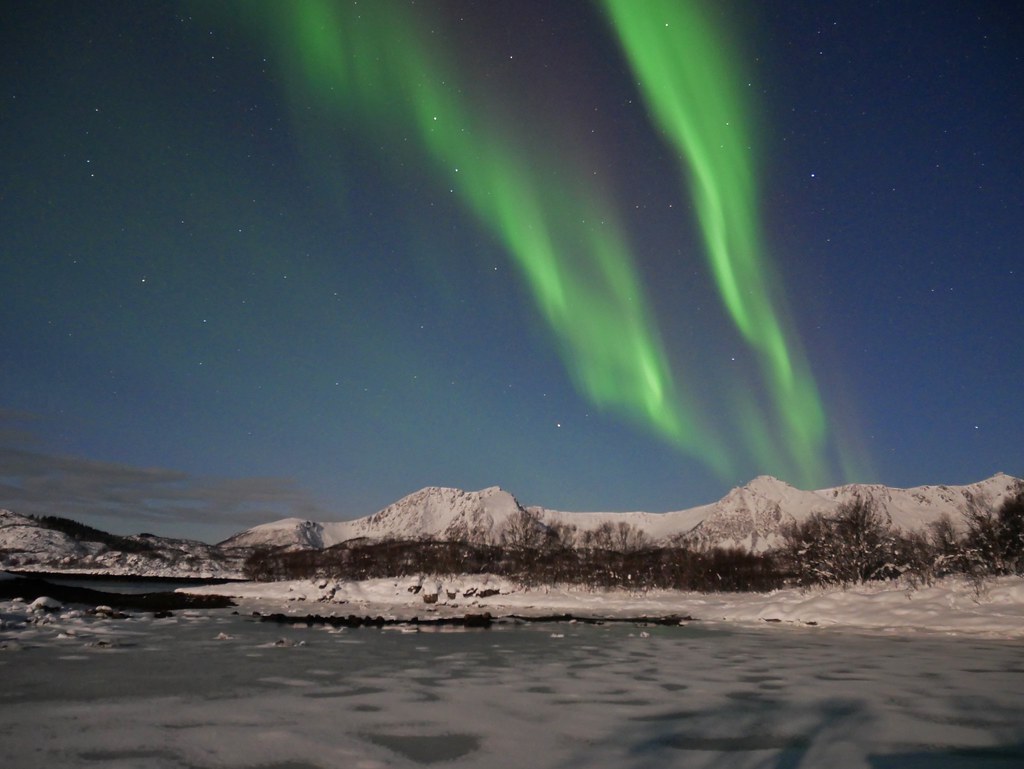 We still saw some incredible sights though, albeit the skies weren’t clear to see the aurora as much as last year we ended up having some really intense shows. One night we waited at the hut by the fjord with some guests in the hope of seeing a geomagnetic storm that had been predicted. Sadly the sky remained deep blue with just the twinkling stars and illuminating moon. The guests gave up waiting and headed back to their apartment while Craig, Samy and I sat around the fire and stayed hopeful. The boys decided to start an ‘aurora chant’. Craig was actually singing a song we learnt in the Sahara while Samy was roaring towards the sky like he was possessed and fighting against a demon inside of him. I was just in hysterics at the bizarre scene and noise I was witnessing – living in such a remote place sure brings out your crazier side. In fact sometimes when we were all being silly back at our house we would joke that we were unknowingly part of a social experiment like the Truman Show.

Anyway, back to the aurora. The roaring, singing and laughter continued to fill the air and before our eyes a green sweep of aurora started to dance from the horizon and head directly up like a rocket shooting into space. The roaring intensified while I frantically got my camera into position and then the sky exploded. We had a corona right above our heads and it was one of the best we’ve witnessed. The movement was undescribable and it seemed so close to us, reaching down from above our heads like a UFO preparing for abduction. We were whooping and cheering and constantly telling each other where to look as we had a 360° show to take in. 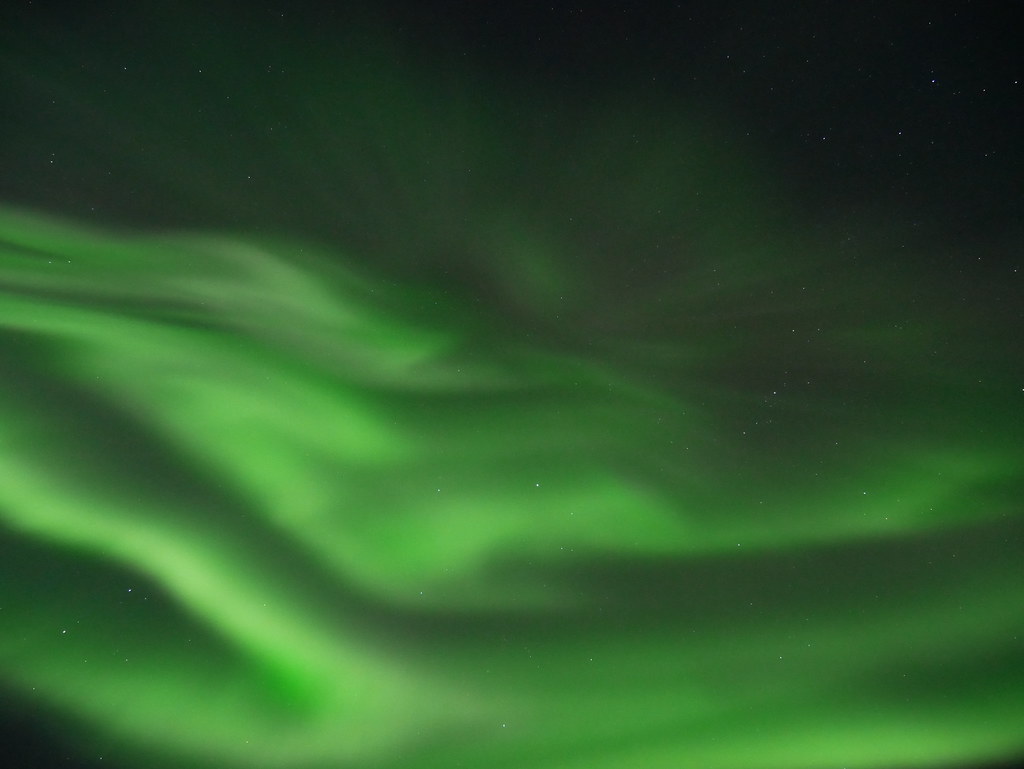 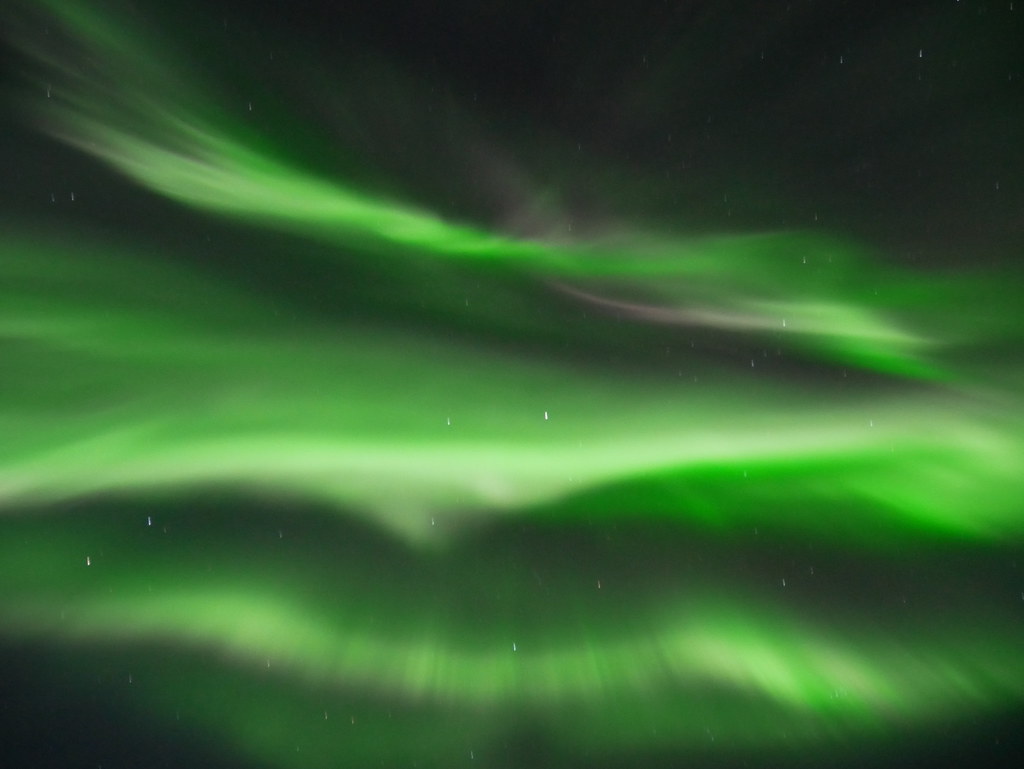 It stayed intense for about 10 minutes and then it calmed down to a normal show. My hands were so cold from taking photos without gloves on that I couldn’t even work out which finger was which to touch a button on my camera. It was the sort of cold that burnt, but it was worth the pain for the incredible show we witnessed. 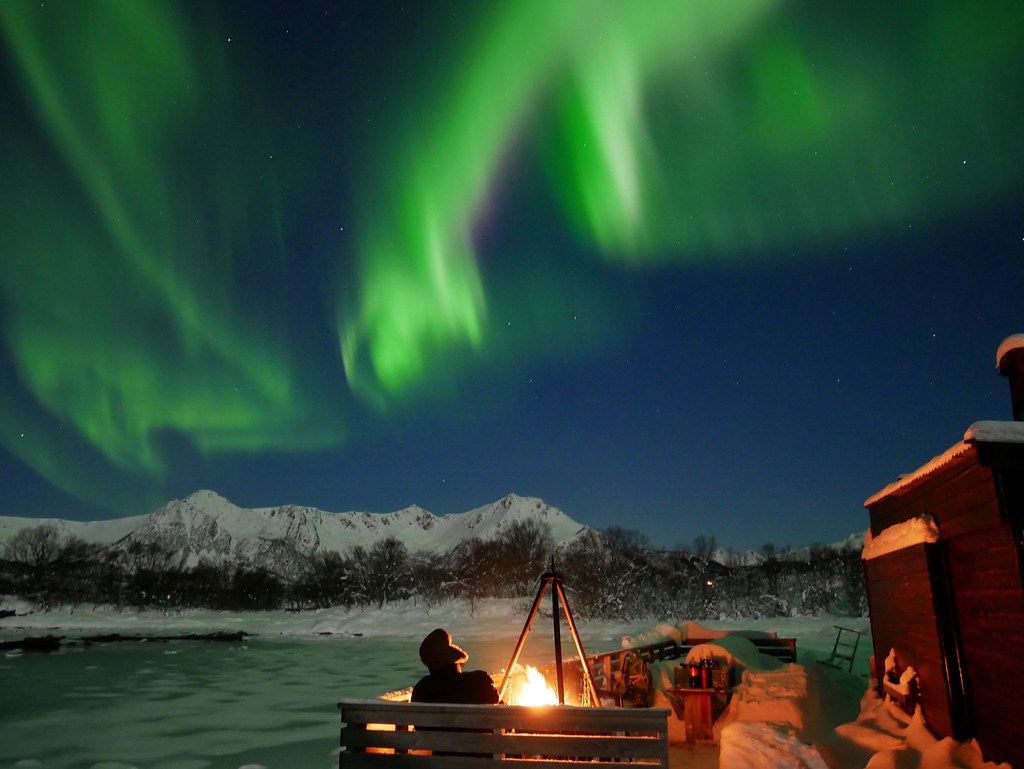 We decided to head home and get some sleep but just as we all got into our pyjamas Samy shouted for us to look out the window. The sky was going absolutely crazy on all sides of the house. We were torn between watching it from the warmth of our house or heading outside…we had to pick the latter and Samy, who was in bed in his boxers when he sounded our aurora alarm, came downstairs wrapped up in his duvet. He ran out the front door and his legs were swept from beneath him as he slipped on a thick sheet of ice. I was still in the kitchen when I heard him saying “I fell…help me….”. I went to see if he was ok and there he was, looking like a human-burrito with his bare legs poking out the bottom. I should have rushed to help him but instead I burst into a fit of laughter! While he laid there waiting for help I had to crouch down to get some control on my bladder as I was so close to peeing myself with laughter. Once I got him up we all l ran outside (carefully) and watched the show in our pyjamas and duvets as the aurora swirled with pinks and greens around our house. 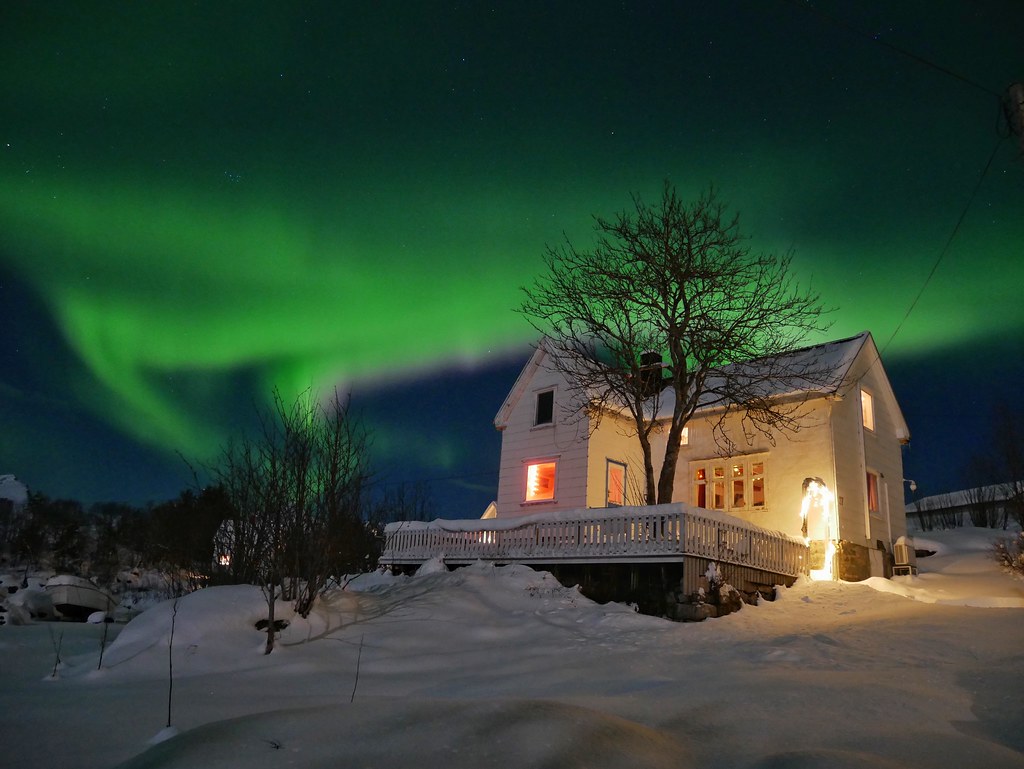 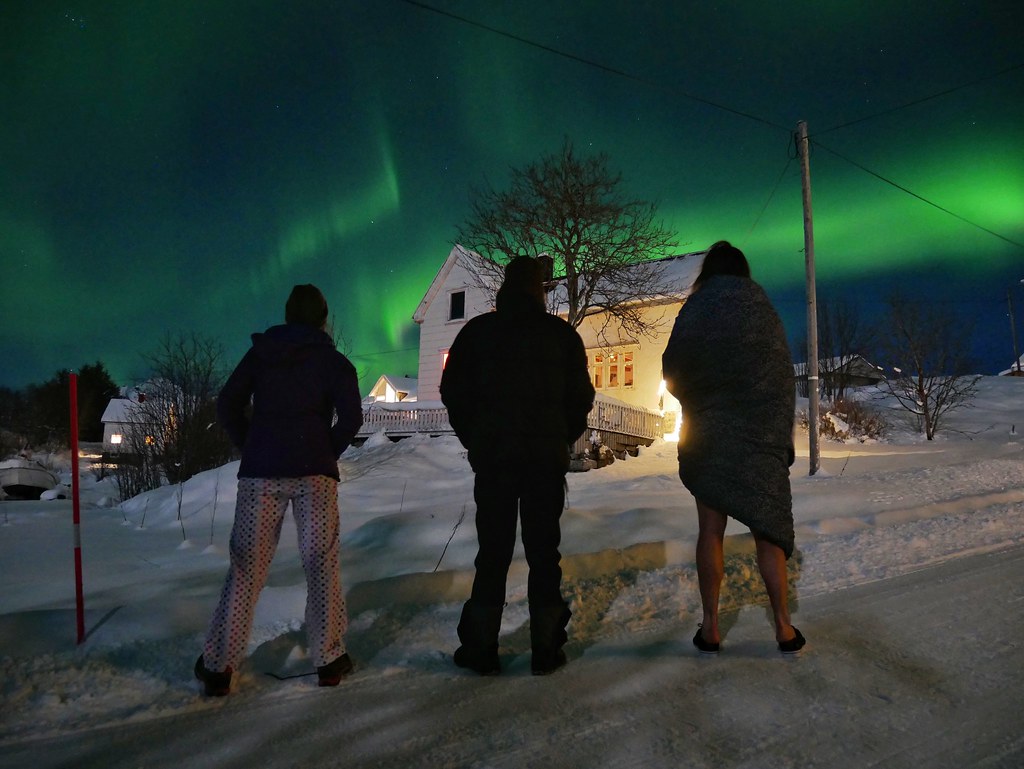 Between the bad weather we’ve still had some cracking sunrises and sunsets too and one of the best was when the sun pierced rays around my favourite pointy peak and stained the clouds fuschia. Most people probably think Asia or a tropical country has the best sunrise and sunsets but we can happily say (weather permitting!!) that the arctic wins for the most intense colours so I’ll add some of my favourite photos from this season below. 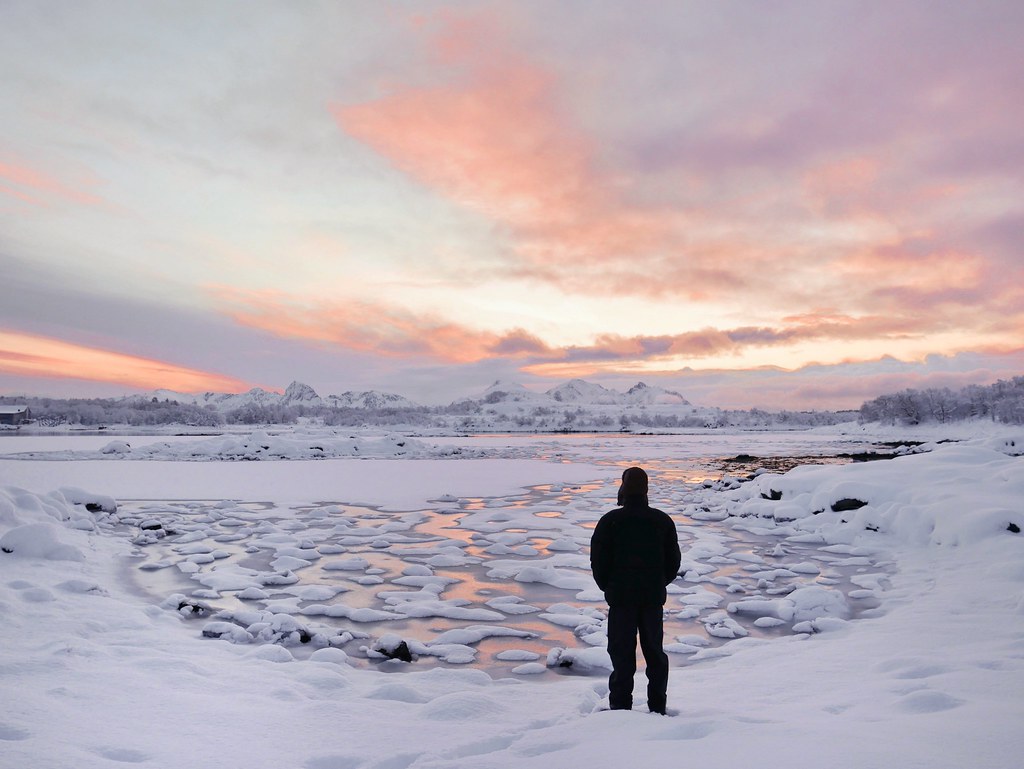 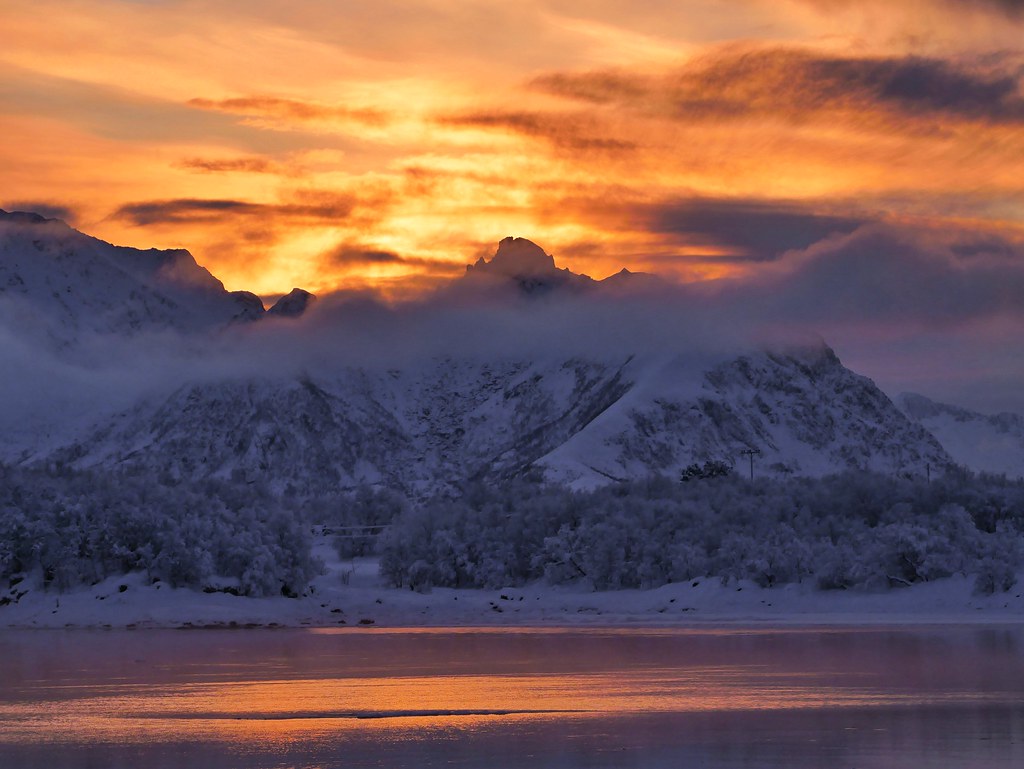 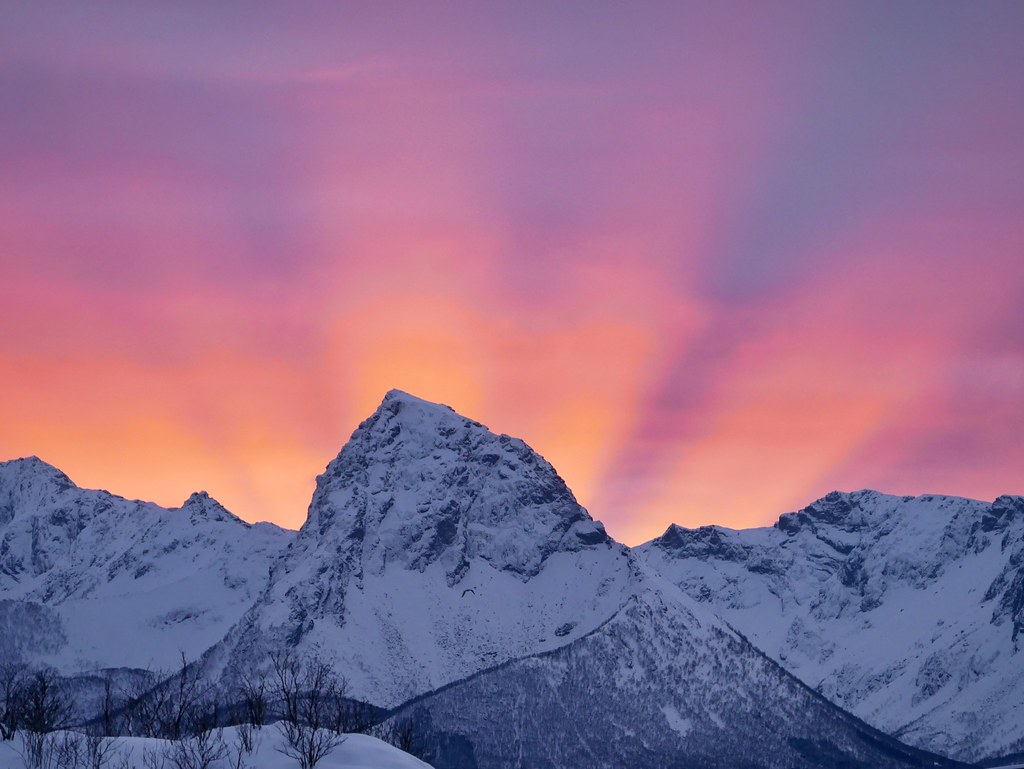 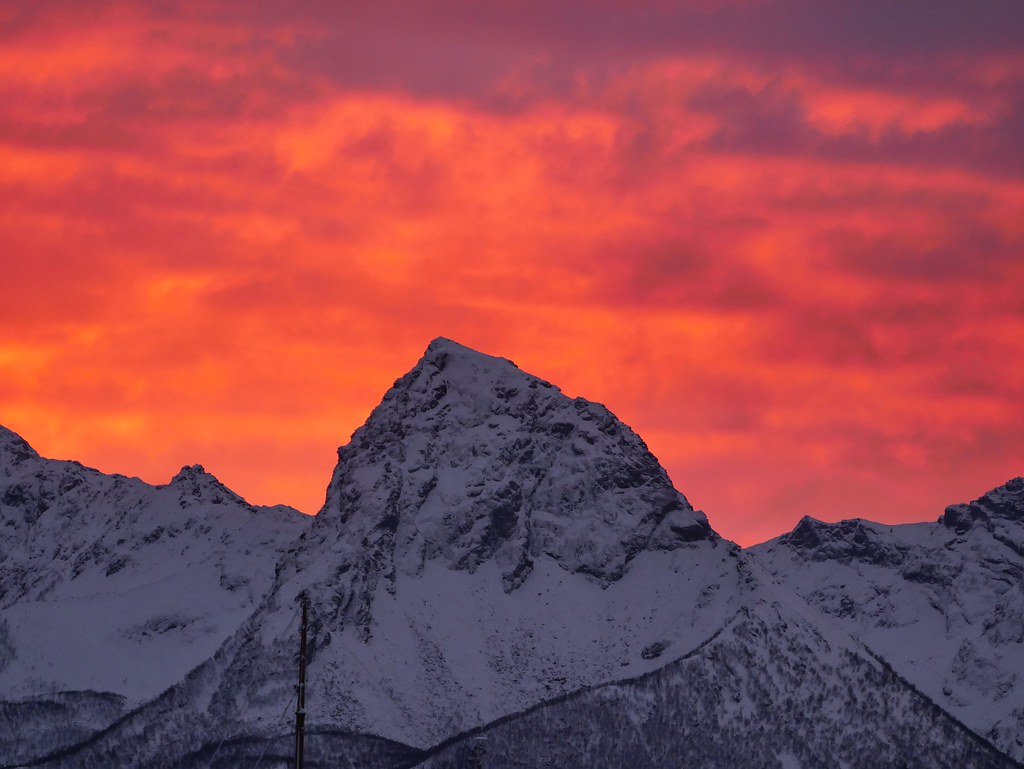 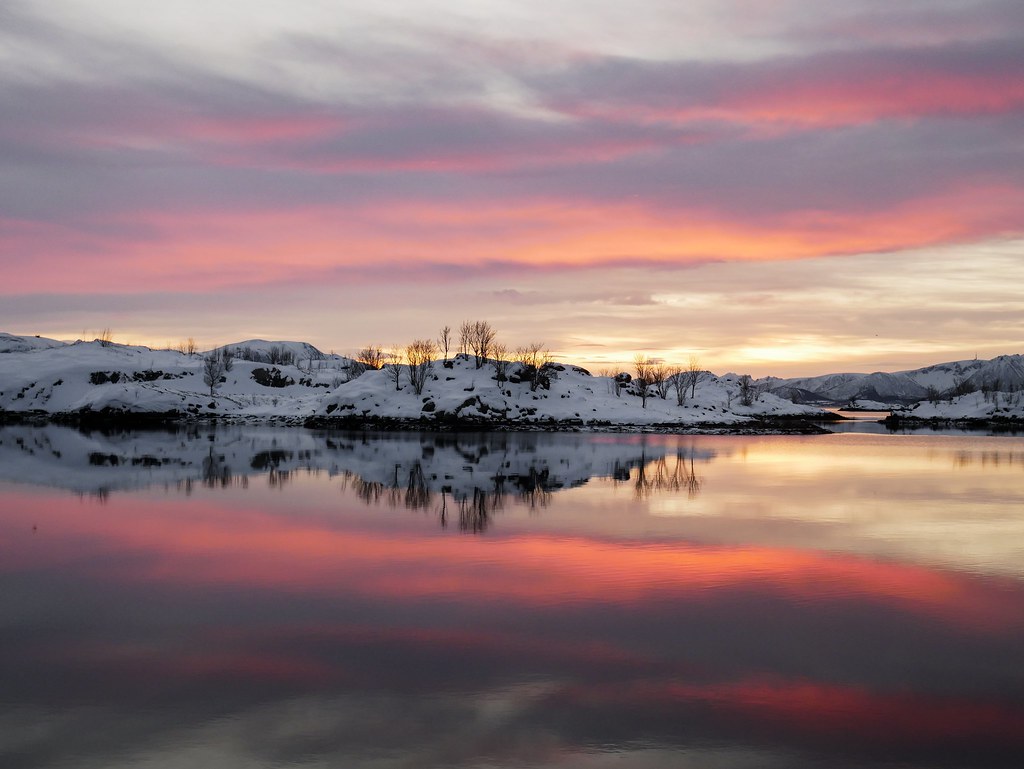 I also managed a jump in the sea, a once yearly occasion it seems and only when the weather is perfect. It was cold, around -3° but with the sun out and no wind it felt bearable. My friends wore wetsuits so they spent some time swimming after the jump while I quickly paddled myself back to the jetty. It was about a one meter swimming distance yet it felt like the full length of an Olympic pool. Then I had to heave myself onto the jetty which was tougher than I expected. I was kicking my legs like mad to project my body up but I ended up just resting my belly on a slab of ice until I finally pulled myself up. With bare-feet I jumped up and down and slapped my arms around my torso to increase blood flow and then I ran home as quick as I could. I was panting like a dog and the short 100m distance felt like the toughest end to my unintended triathlon. But I must admit, I felt pretty damn good and alive after my hot shower. 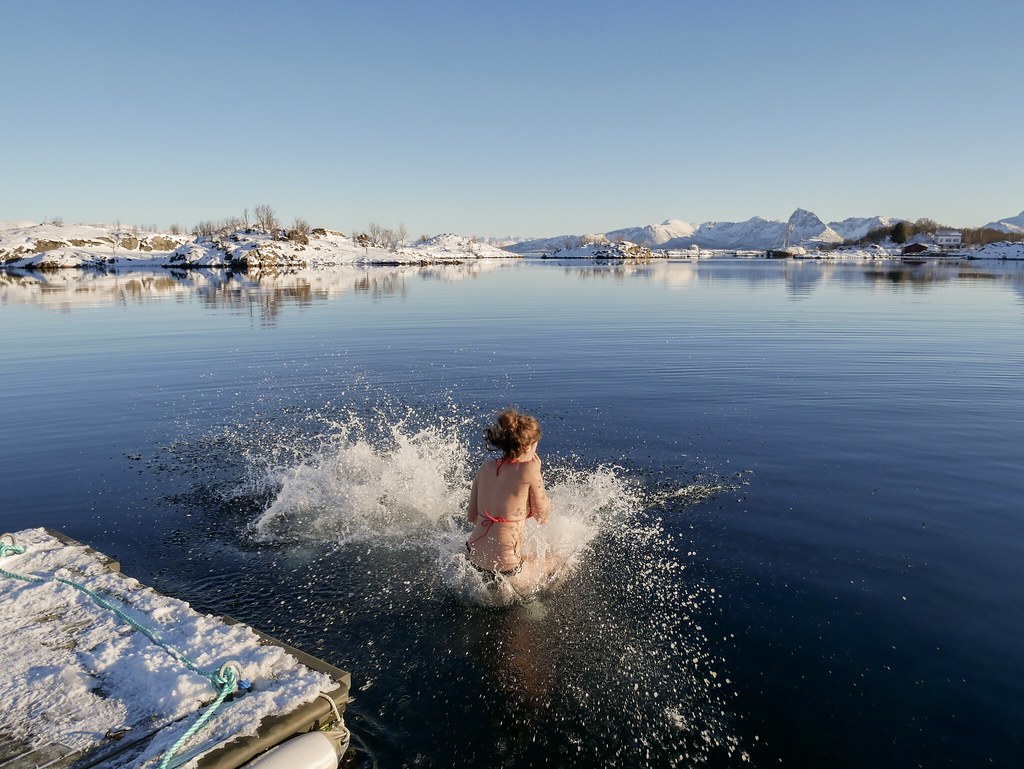 Another highlight was our road trip to Hovden area as we had beautiful blue skies with intense wind which whipped up the fresh snow into the air. It looked amazing with the low sun turning each flake a golden colour. A short walk led us to one of my favourite views in the area, right above Nykvåg beach with its turquoise waters and snowy peaks all around. The drive to Hovden is full of incredible mountain vistas and perfect beaches, we’ve even seen moose around there on a couple of occasions. In fact this trip the wildlife encounters have been much better with dozens of moose sightings, sea eagles gliding through the sky and even a rare viewing of an otter running down the road beside our house. 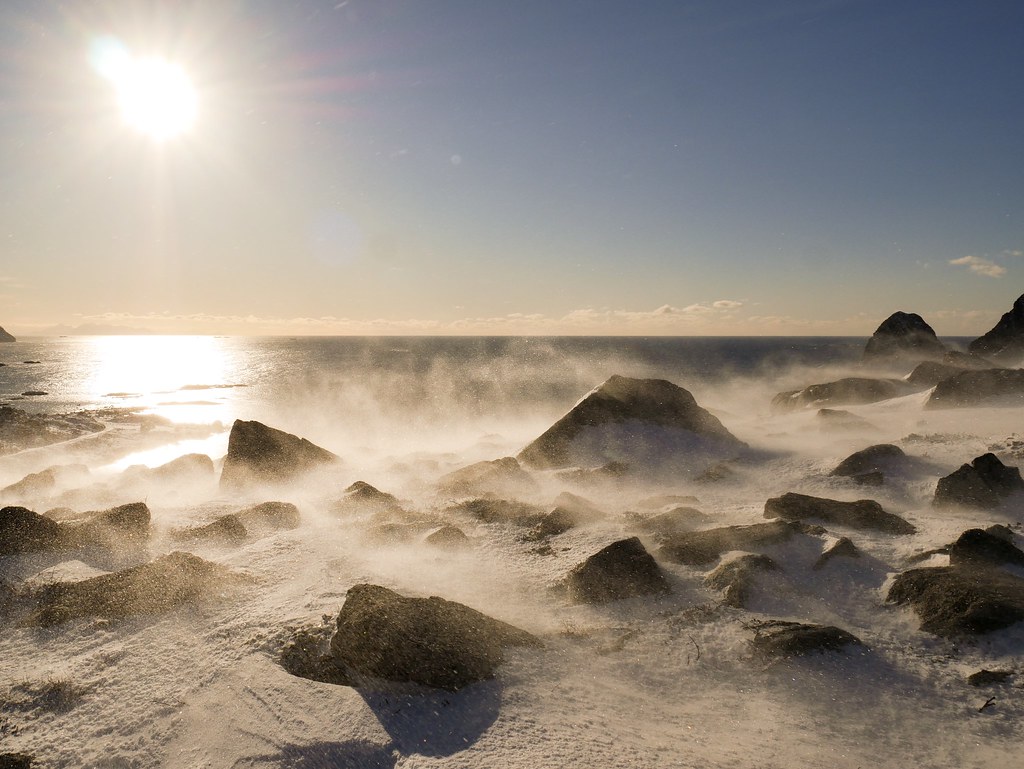 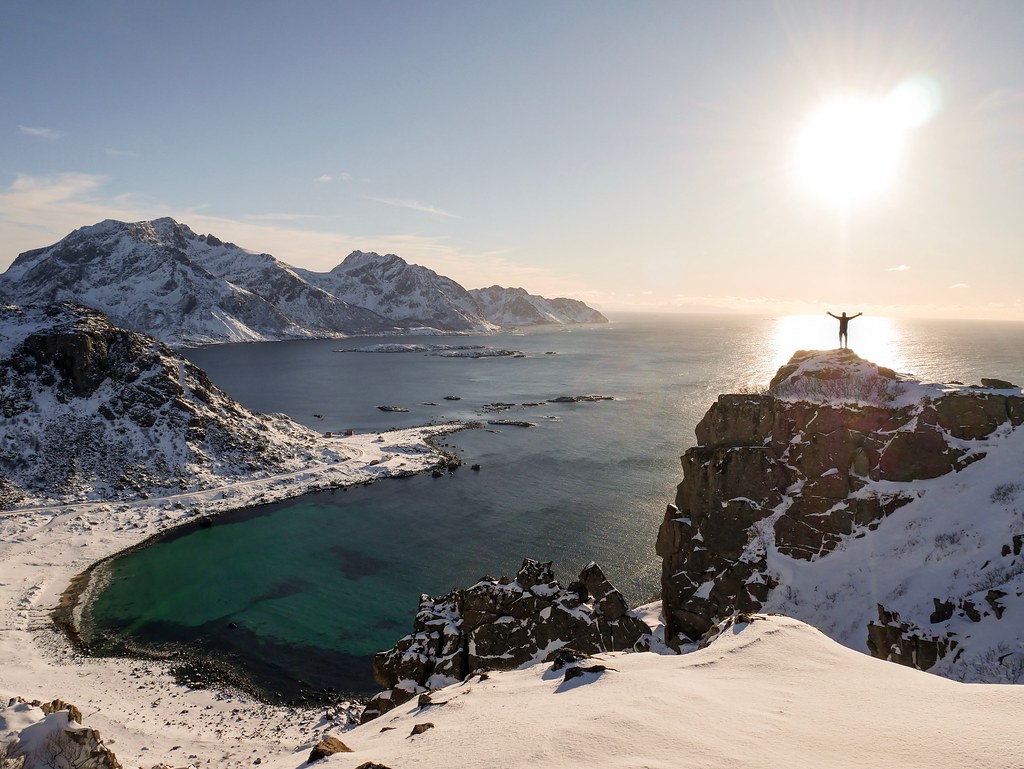 So yeah, we’ve seen some great things but it’s time for us to be where we’re happiest and hit the road in the USA. 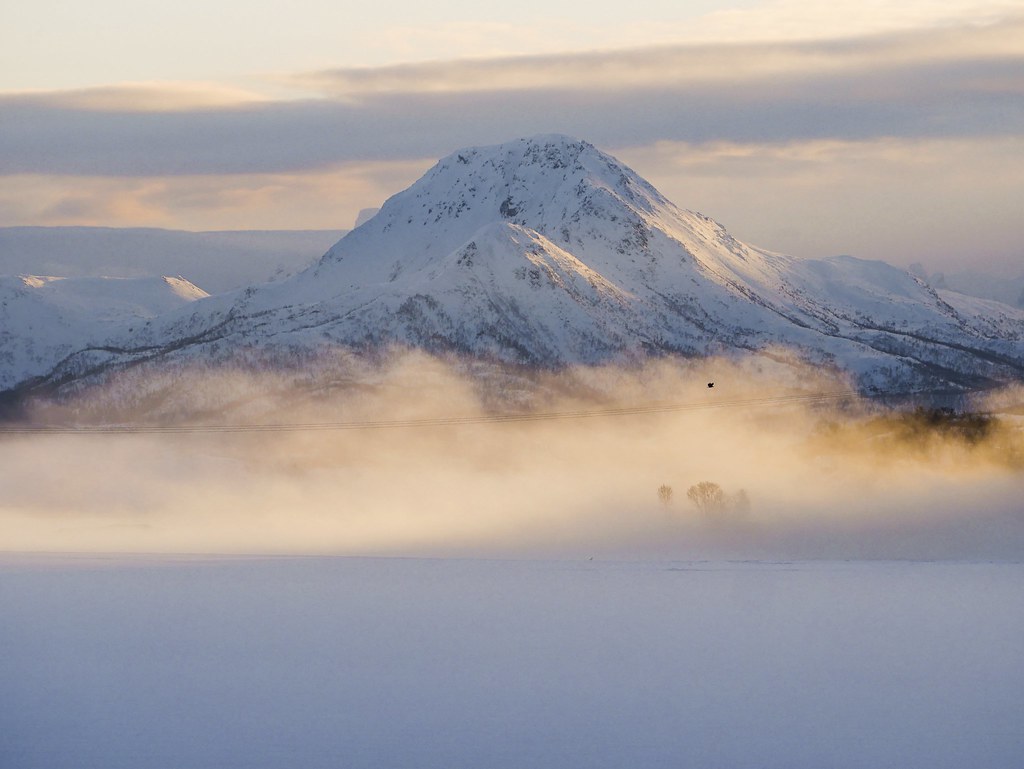 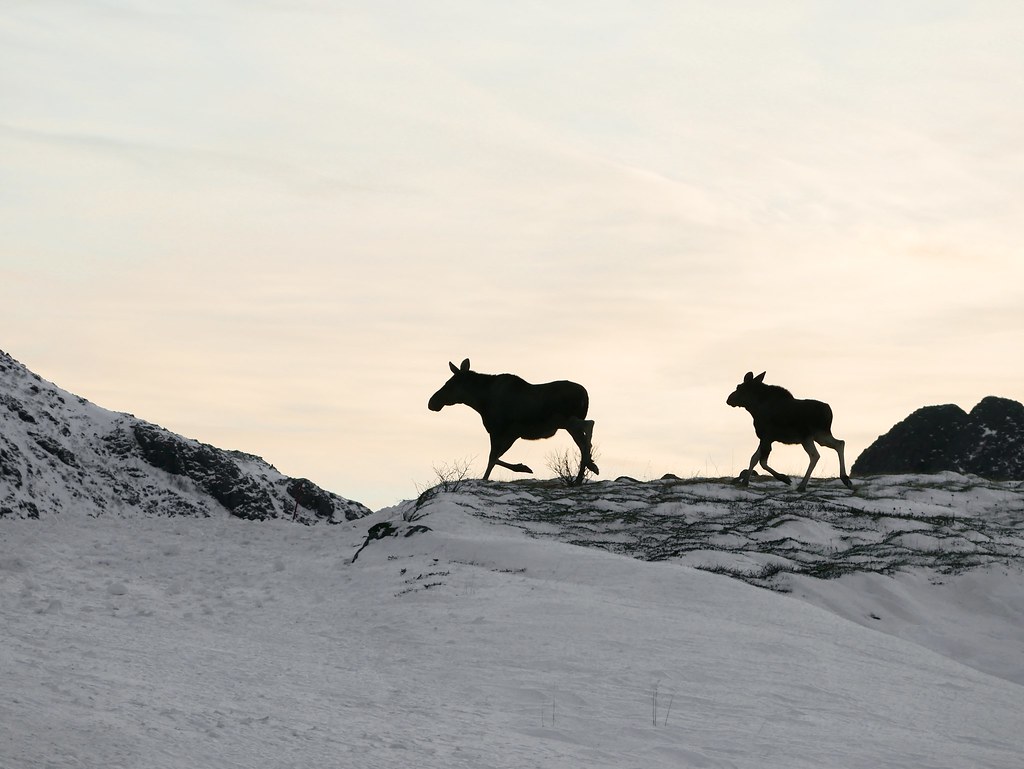 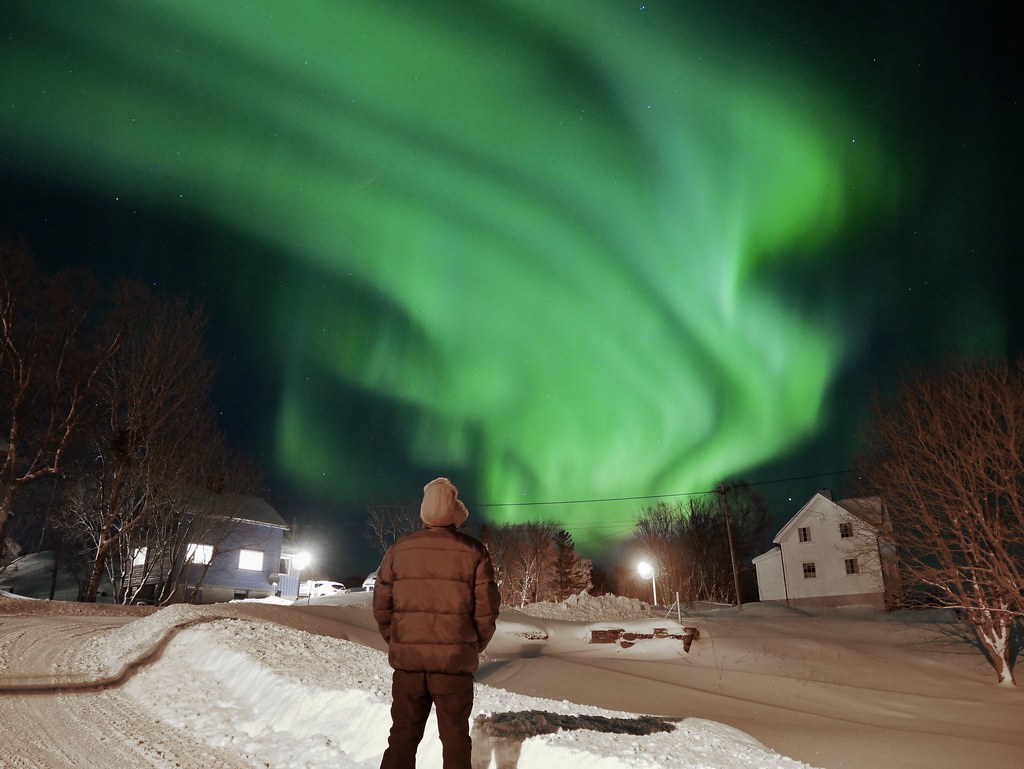 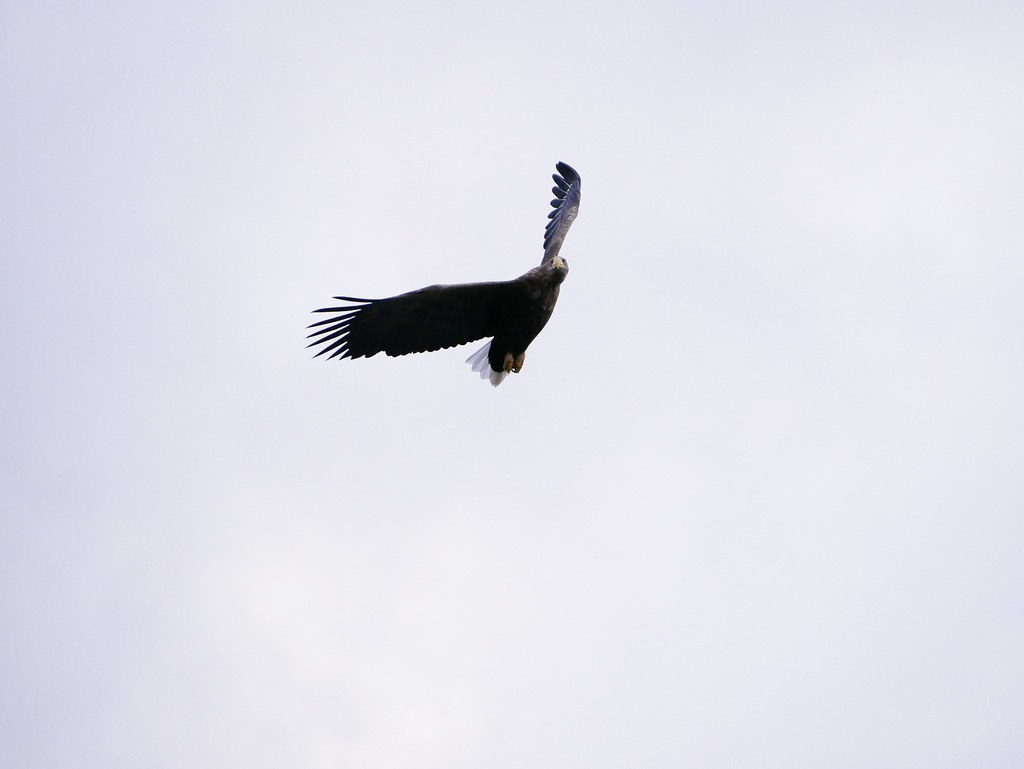 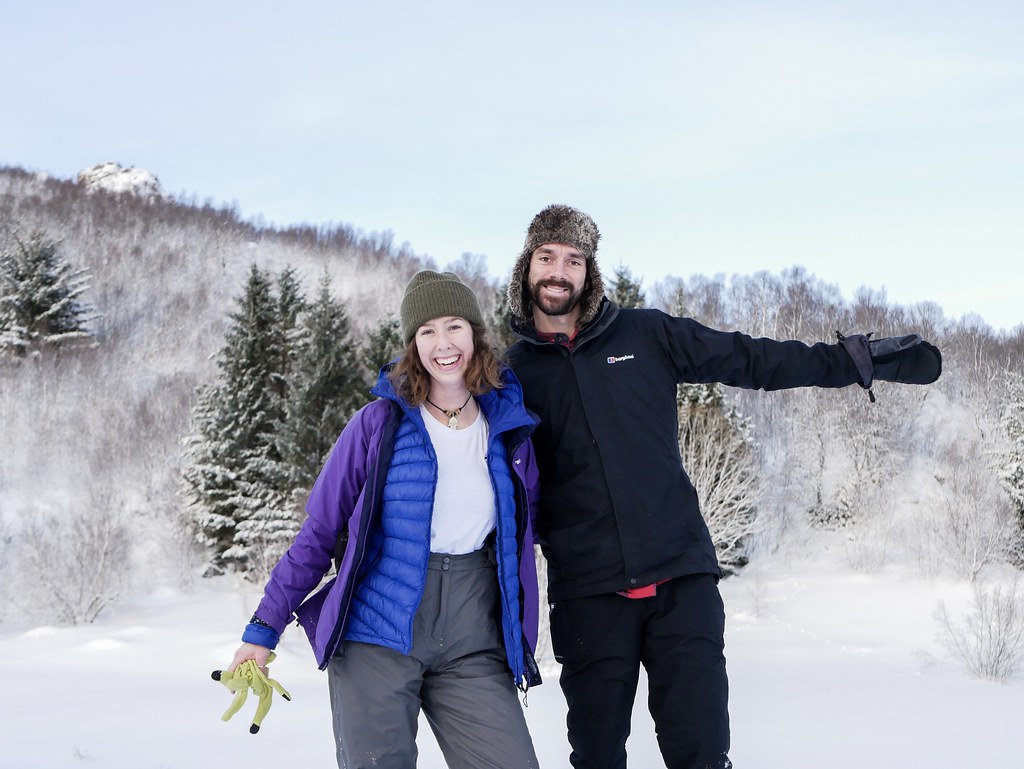