After a wet and cloudy start to Norway we’ve finally got snow…absolutely shit loads of the stuff. We’ve had to plow the pathways, boats and roofs daily. Giant icicles hang like stalactites from our house and wind whips up the old snow creating hard to budge snow-dunes. 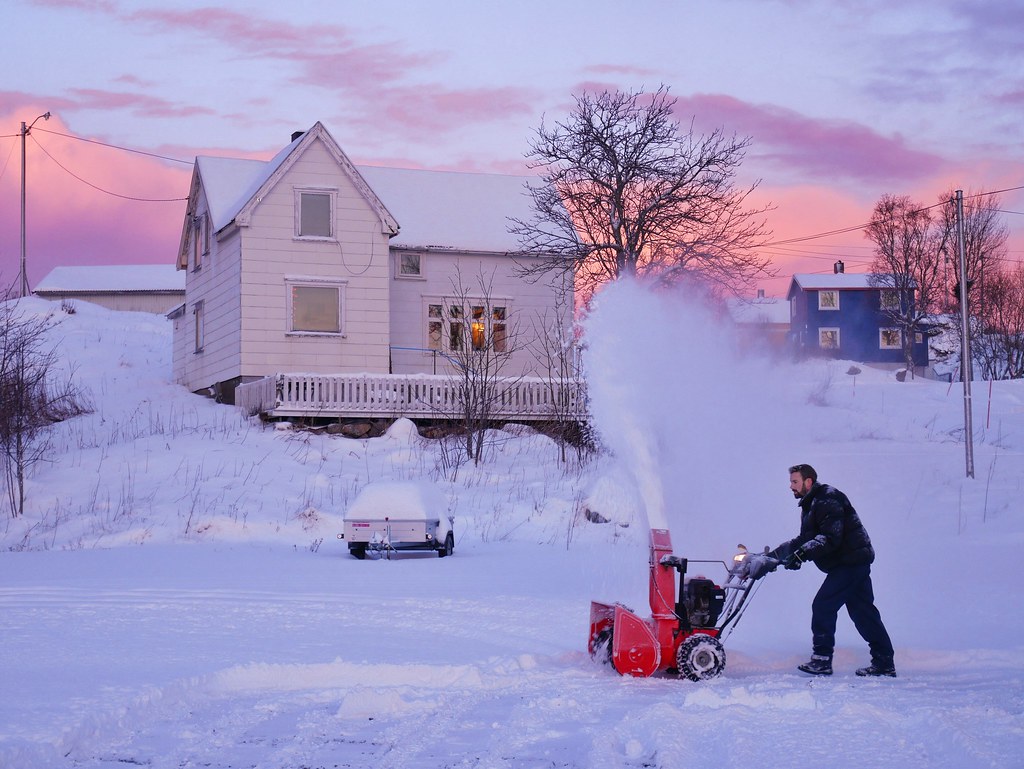 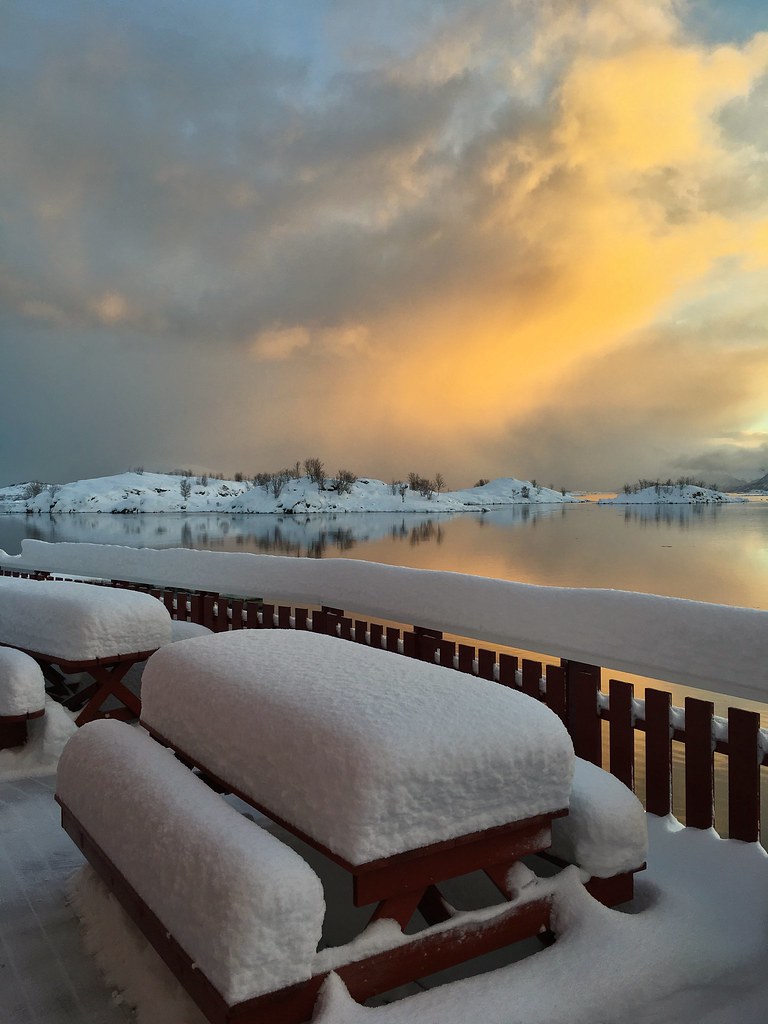 We’ve made the most of the situation by creating super fast sledding tracks in the hills behind our house, doing snowshoe walks and taking the kick sleds along quiet roads. There’s a really fun route we can take from our property, we strap our snowshoes onto the kick sleds and glide along the frozen roads. The uphill sections are a bit of a slog but it’s worth the effort for the free-ride back down. It’s actually quite exhilarating when we pick up speed, especially when there’s snow blowing in our faces and we can’t see where to go. Sometimes gravel or random patches of tarmac poke through the snow and can cause us some unintentional braking. 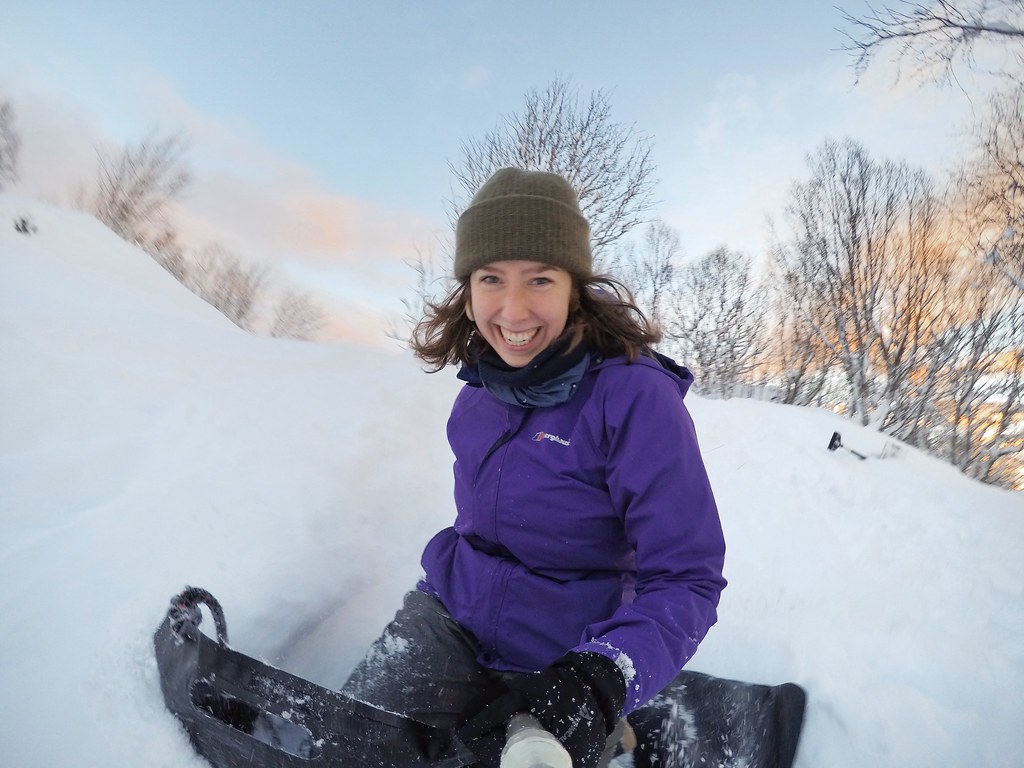 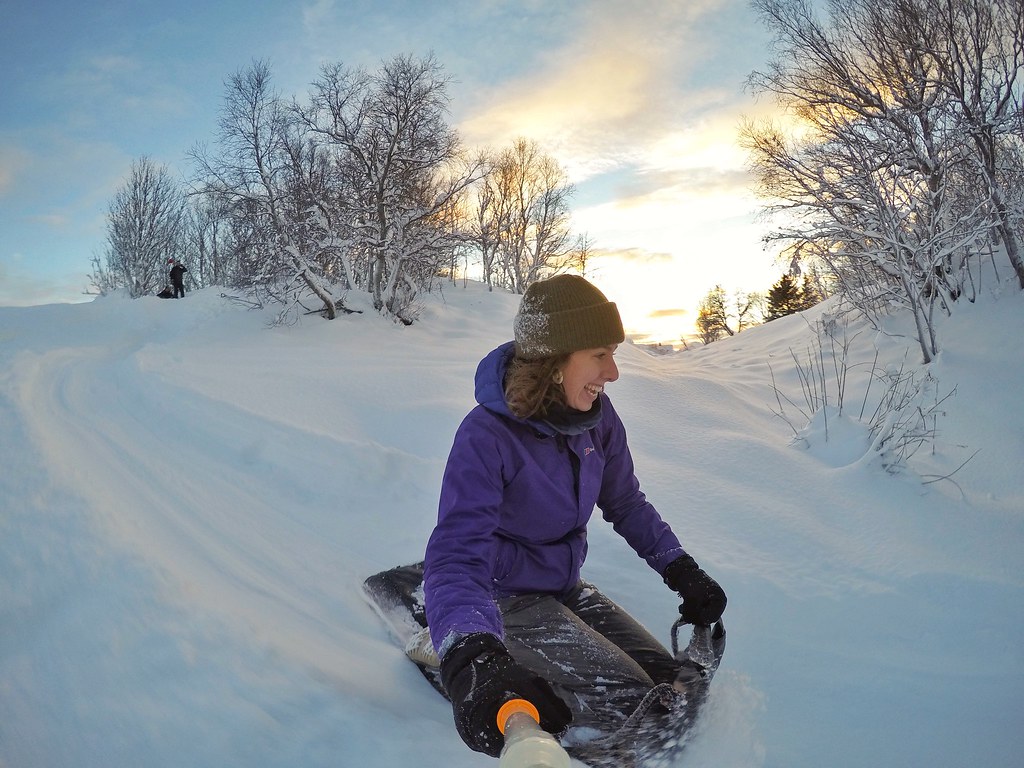 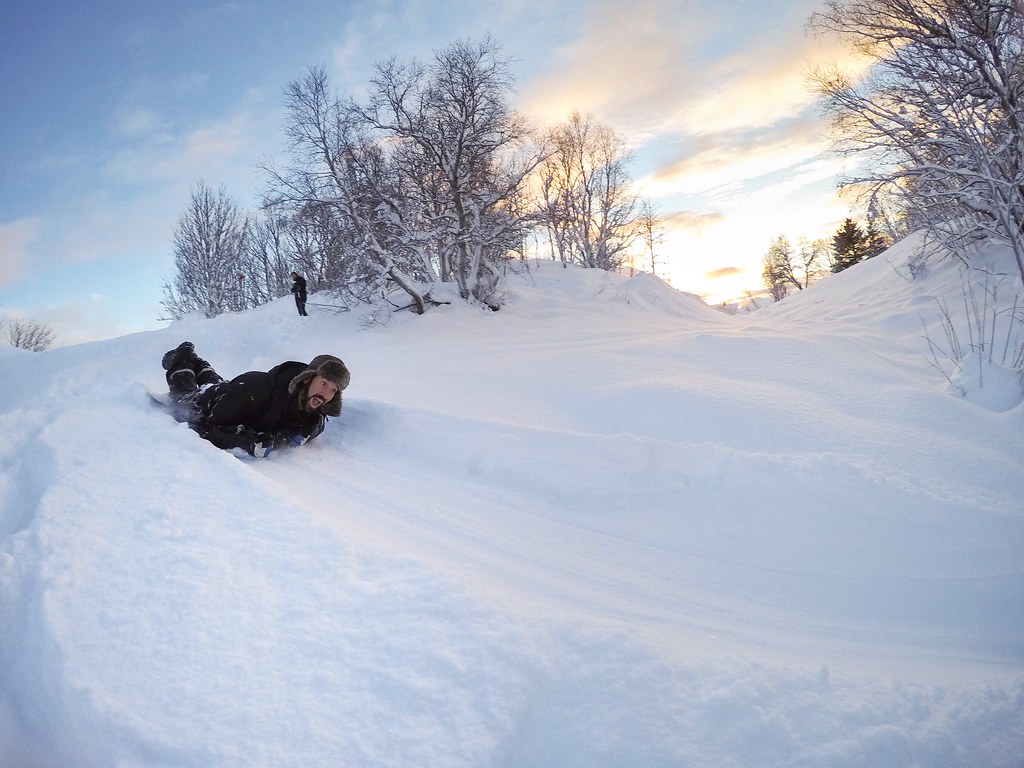 We’ve had a mix of weather on our trips, the first time was bitterly cold but with the typical pink arctic sky that lasts for hours. We rode the sleds until we reached the biggest lake in Vesterålen and from there we strapped on our snowshoes. We had to make a fresh trail in the deep snow, passing numerous moose and rabbit tracks that had recently been made. One section involved us ducking through a natural tunnel of bent pine trees which were weighed down from the heavy snow. 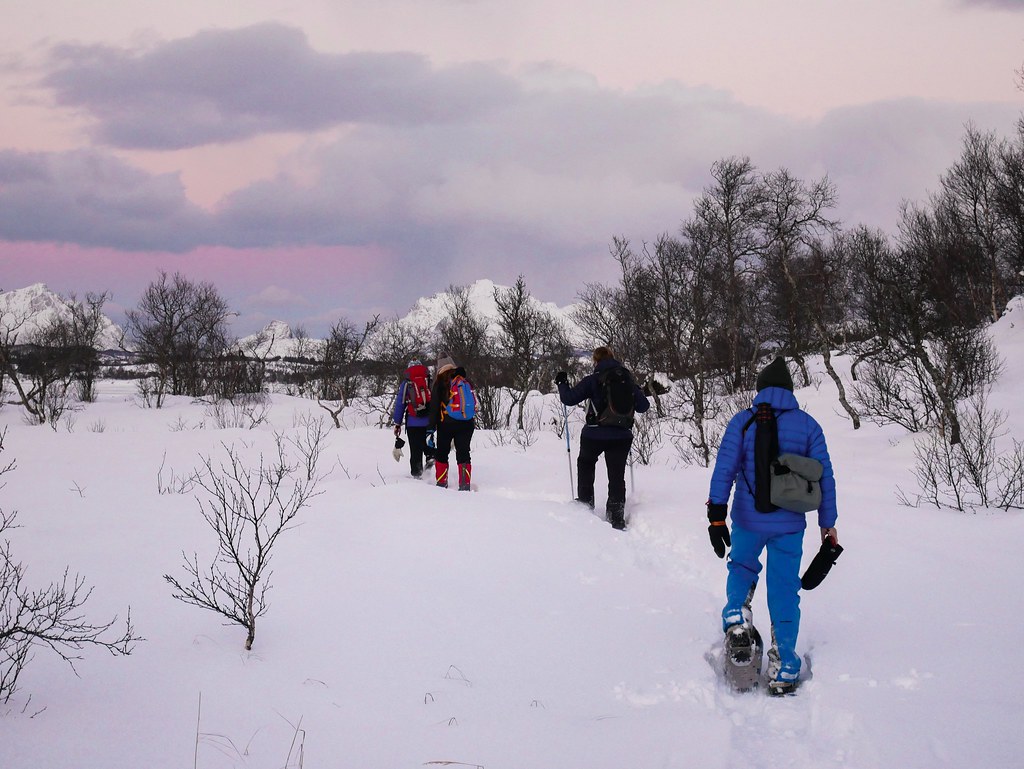 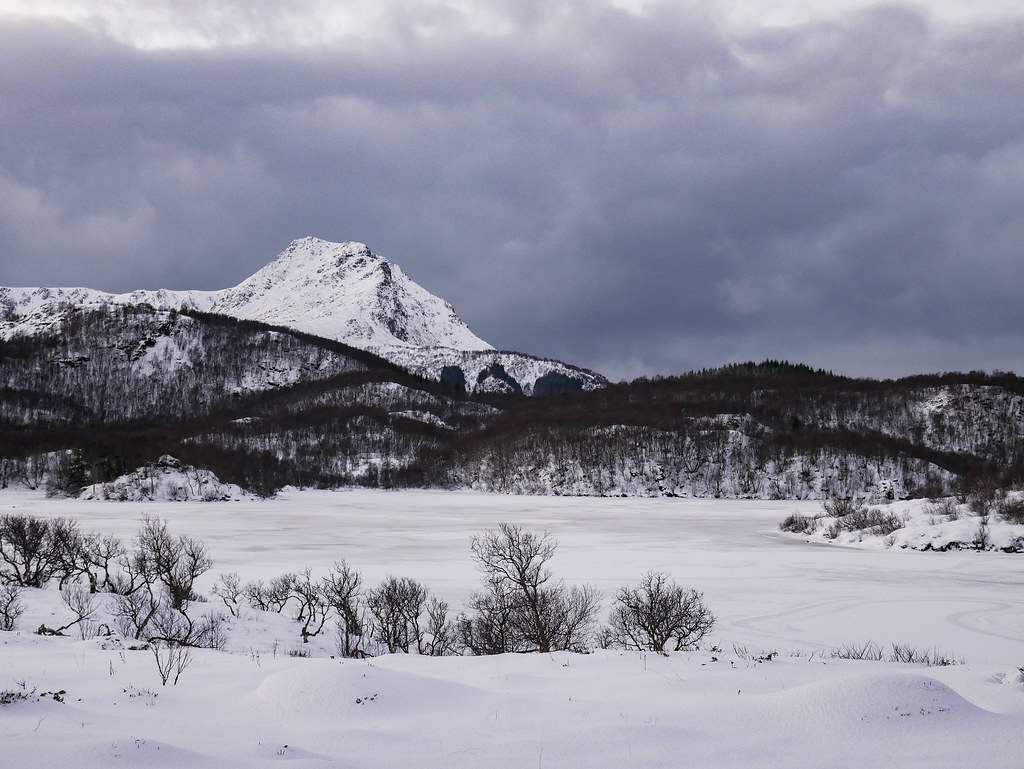 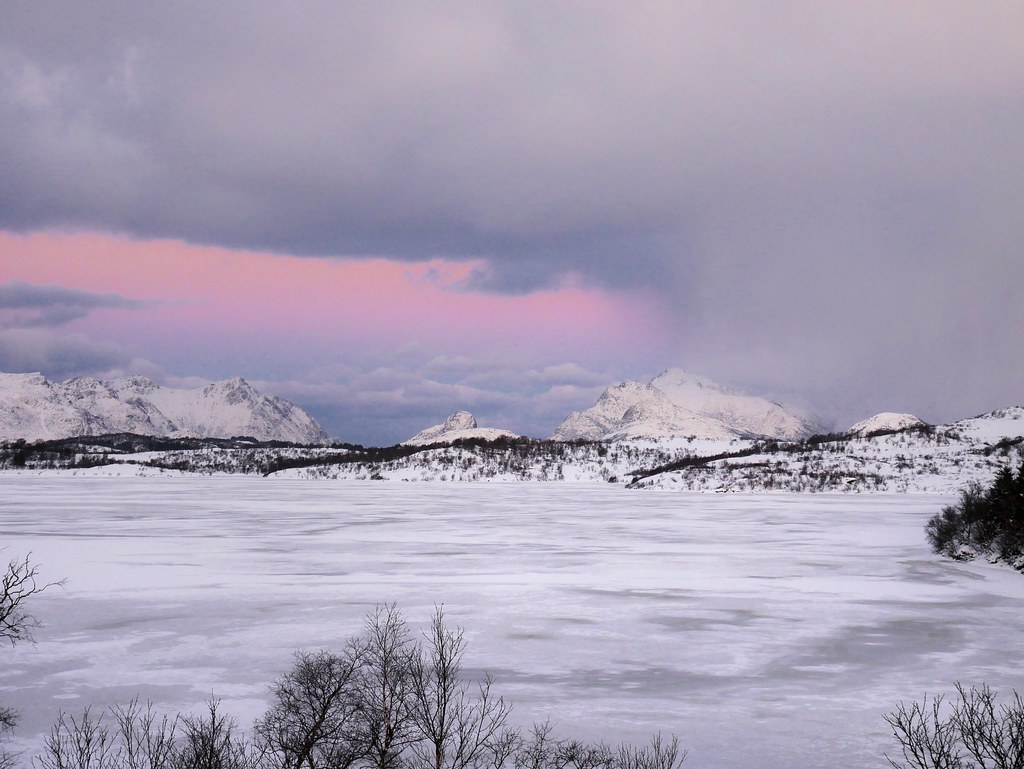 Our end goal was a little cabin on an island and to reach it we had to go across a swing bridge hanging just above the frozen lake. We scooped the snow out of the bbq and got a fire roaring to cook sausages on. It was a really lovely spot to enjoy the lake and mountain views while sipping hot chocolate and cooking sausages till they turned black. The route home was in the dark which was fine until we made it back to our kick sleds and a small snow storm arrived. Our head-torches eliminated every blob of snow flying towards us like stars darting past a rocket in space. It was impossible to see where the road was so we ended up sledding under the moonlight. 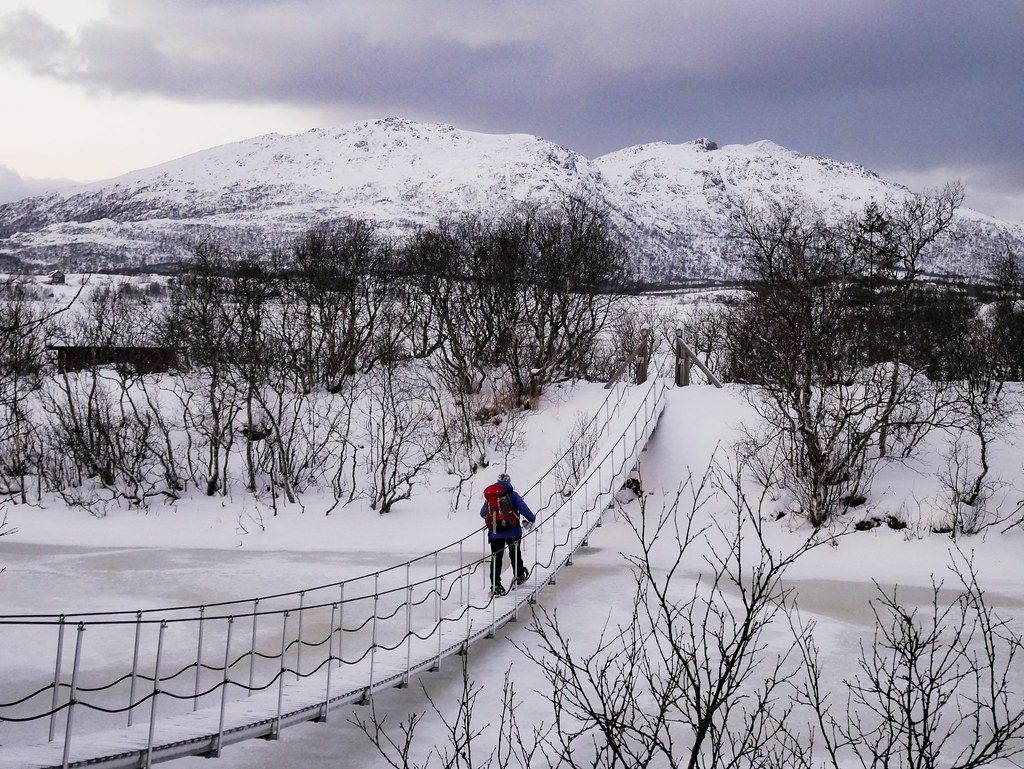 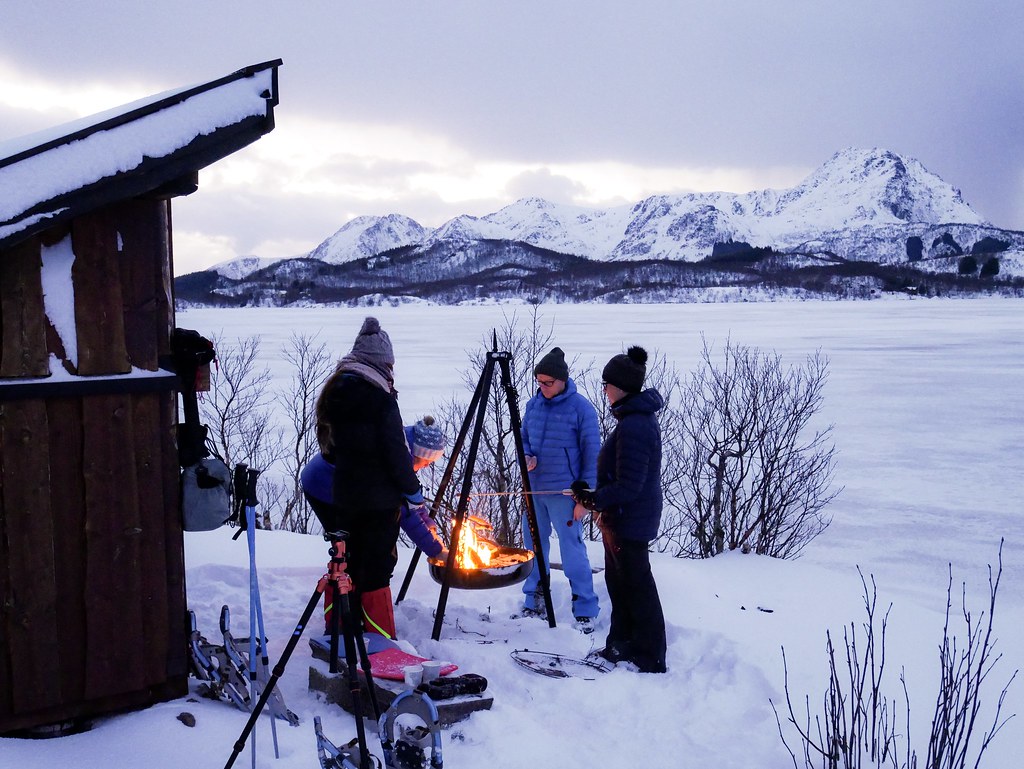 Luckily snowshoeing is something we can do when the weathers bad too so we’ve also been out in heavy snowfall and had just as good a time. In fact it was much easier to walk through the fresh, fluffy snow than the old wet stuff. We had some Swiss guests with us who were just as excited about the snow as we were. 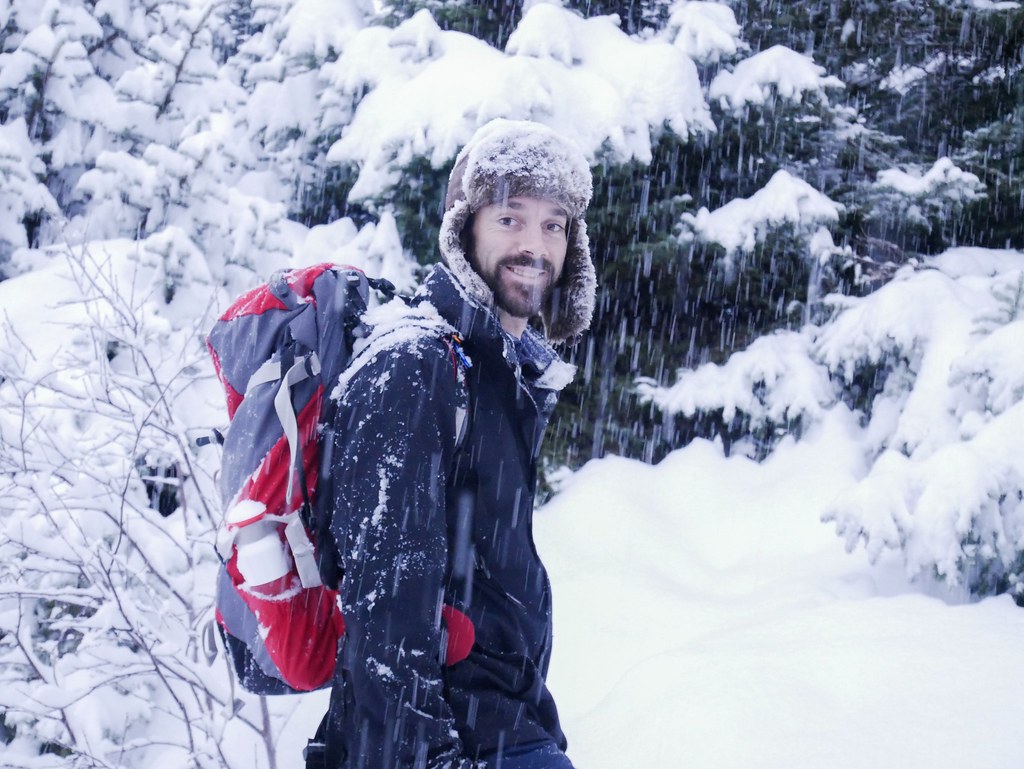 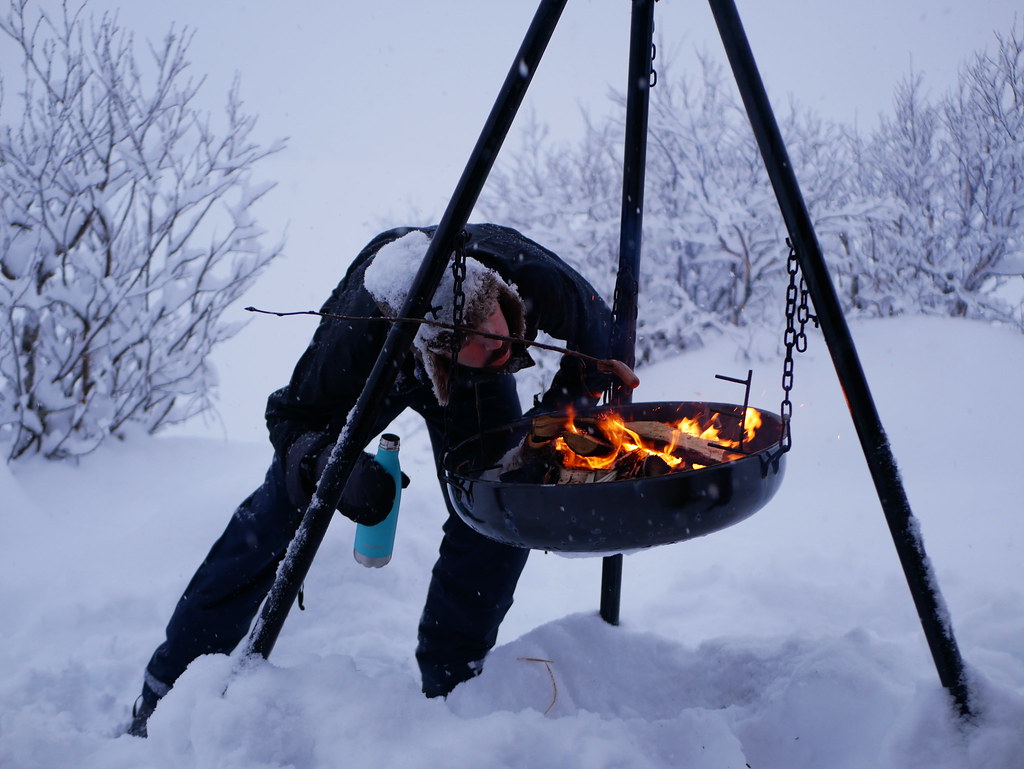 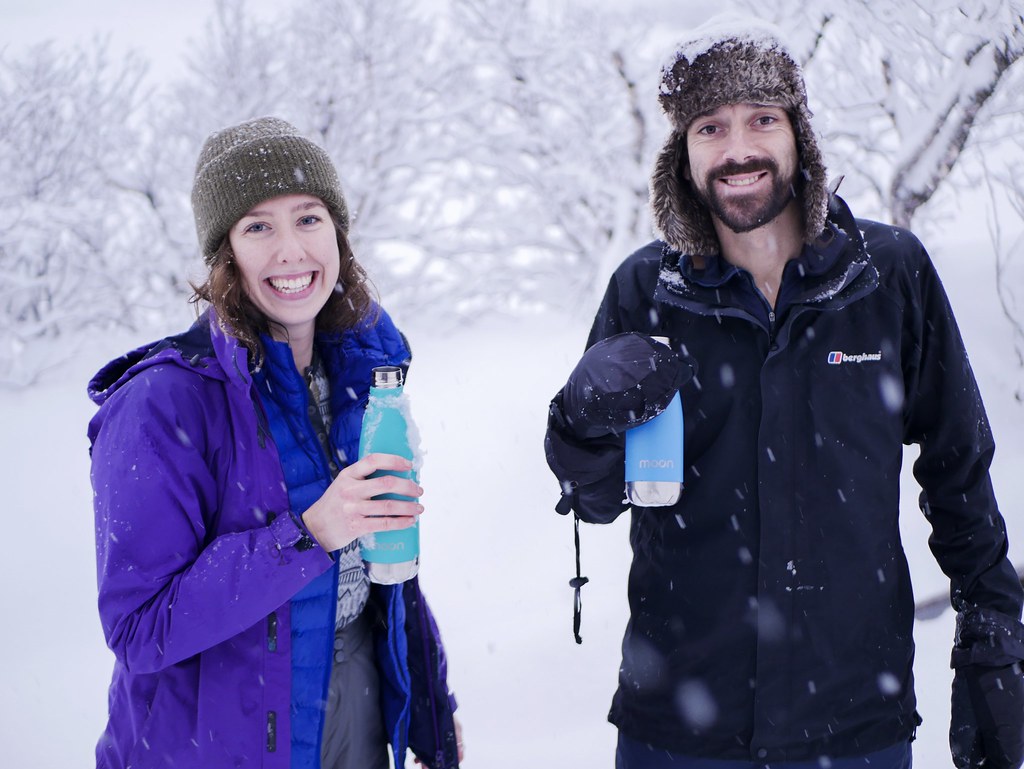 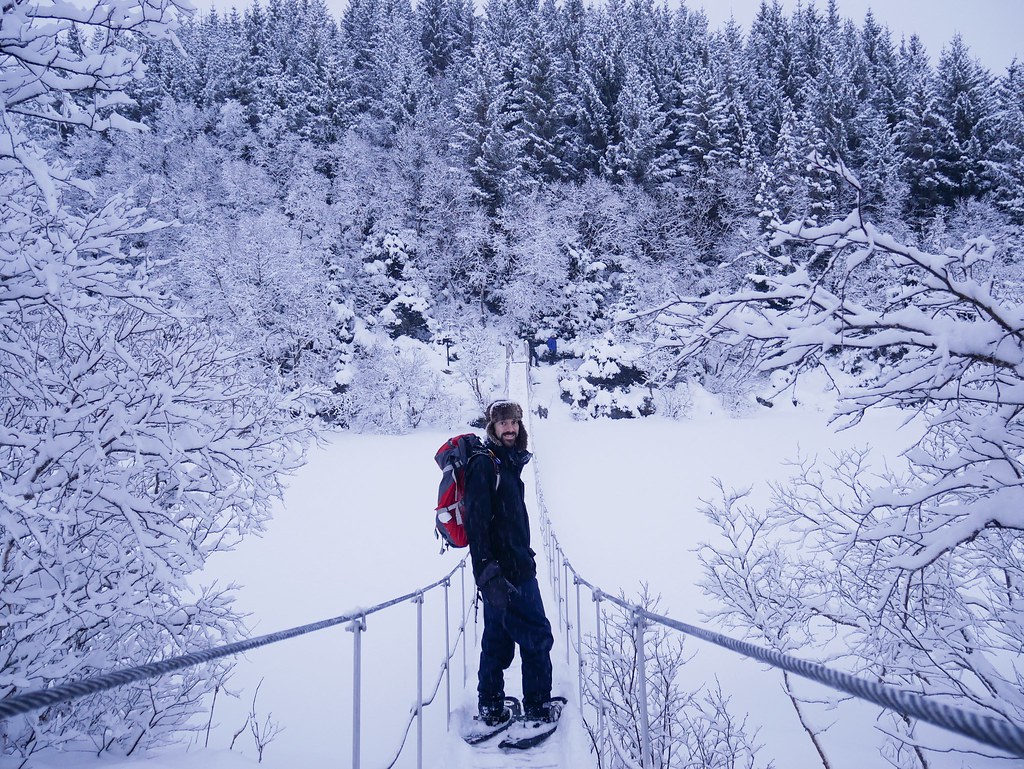 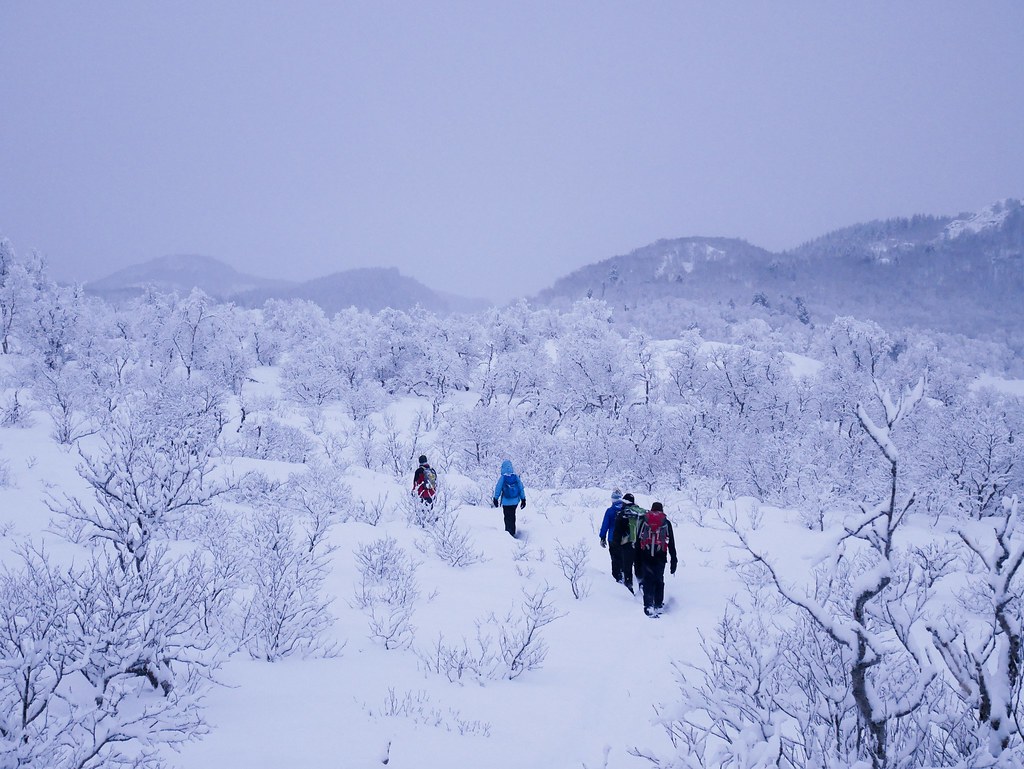 One day we did a 12km kick sled trip as the sun was rising at around 10am. We followed the small roads and then joined onto the main road that circles around Bø. Amazingly we witnessed just a couple of cars on the road so it felt like we had a private track. It was one of the coldest days we’ve had here and it caused all of my hair that was exposed to the air to freeze solid. We sledded to a spit of land that sits directly opposite our village. From the end of the snowy track we had the prefect view of our little village, with houses painted like candy and steep mountains rising all around. After a beautiful sunrise the weather took a turn for the worst so of course we had snow on our journey back. It wouldn’t be a winter adventure without a little snowstorm though. 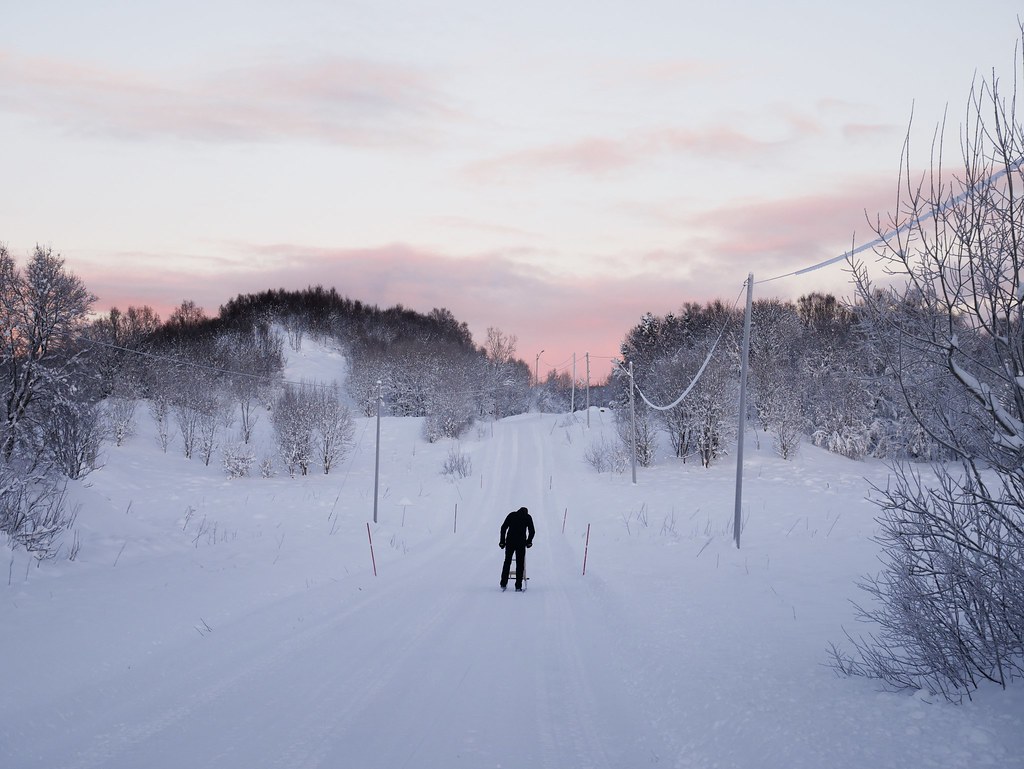 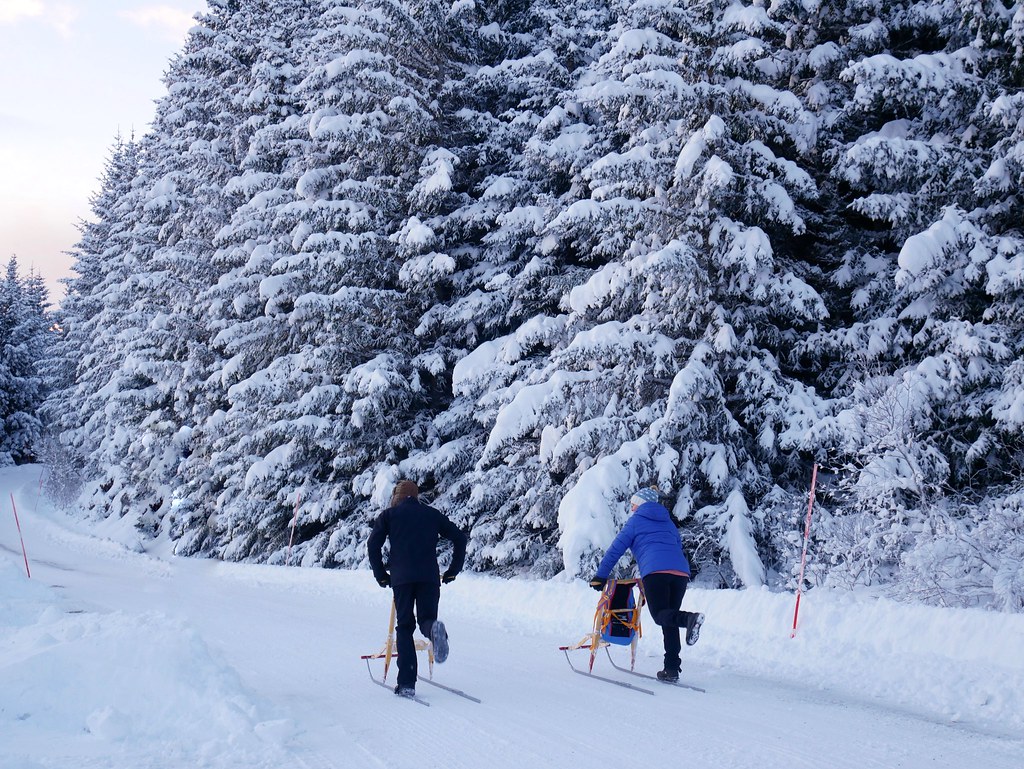 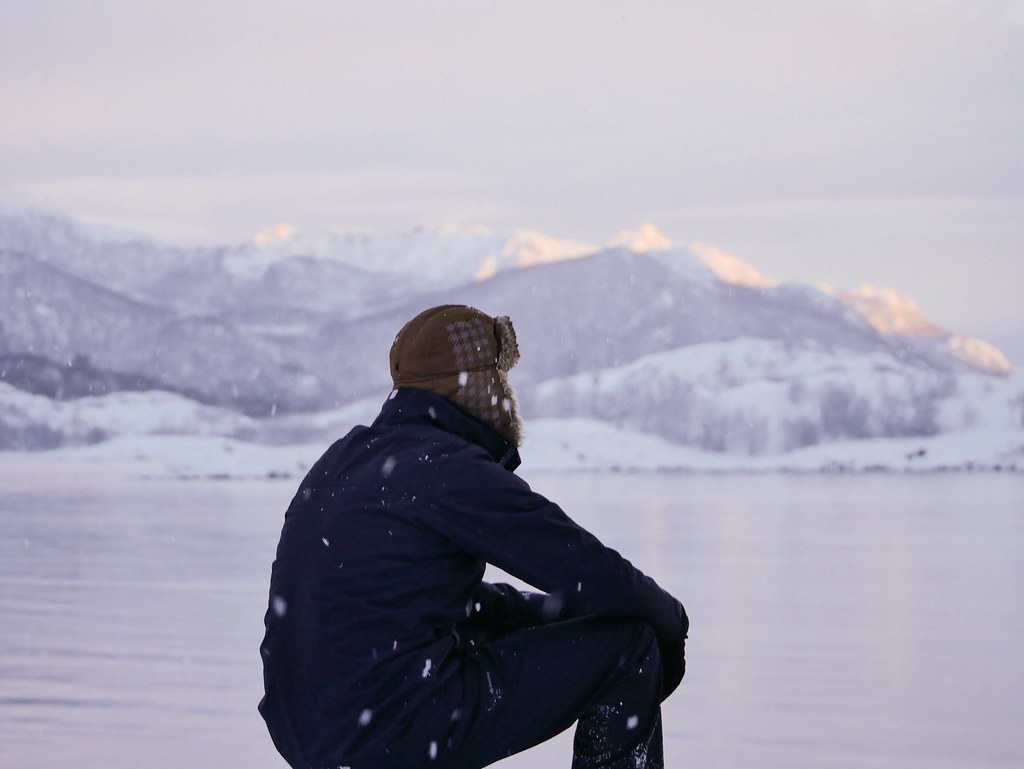 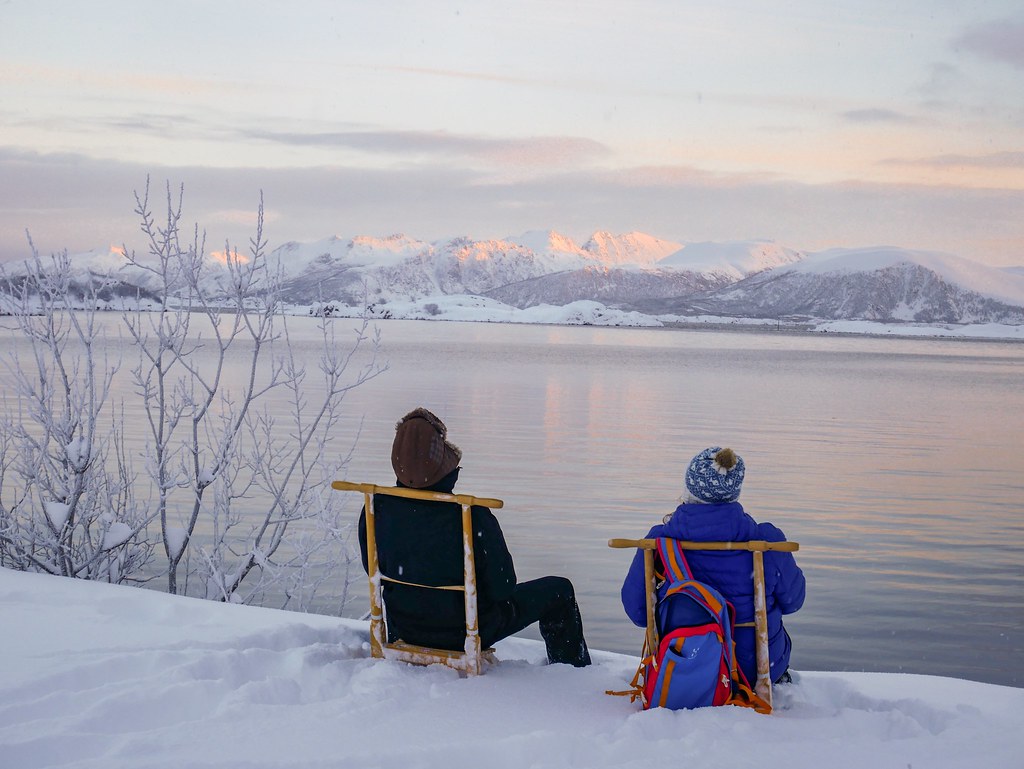