Senja is an area of Norway I’ve longed to visit. It’s the second largest island in the country, shaped like a piece of jagged coral reef and home to some of the most dramatic mountains that drop directly into the sea. As luck would have it we were invited to join our host on a road trip there for Christmas to spend time with her family over the festive period.

As the crow flies Senja is only about 100km away from us, yet to drive there it’s roughly 500km of winding roads alongside fjords, lakes and dense forest. It was a very scenic drive with a big change in climate as we headed inland away from the sea. The snow thickened and the temperature dropped down to -18 degrees as we drove along the icy roads. The windows even began to freeze on the inside of the car so we ended up scratching naughts and crosses in the ice to keep us busy. 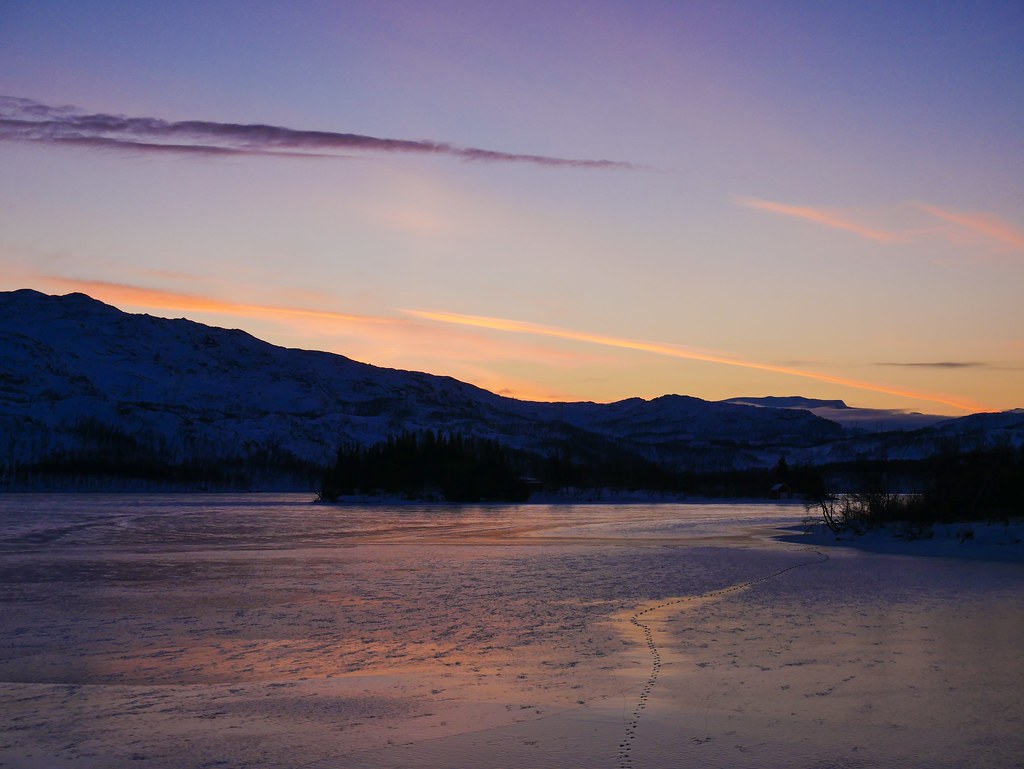 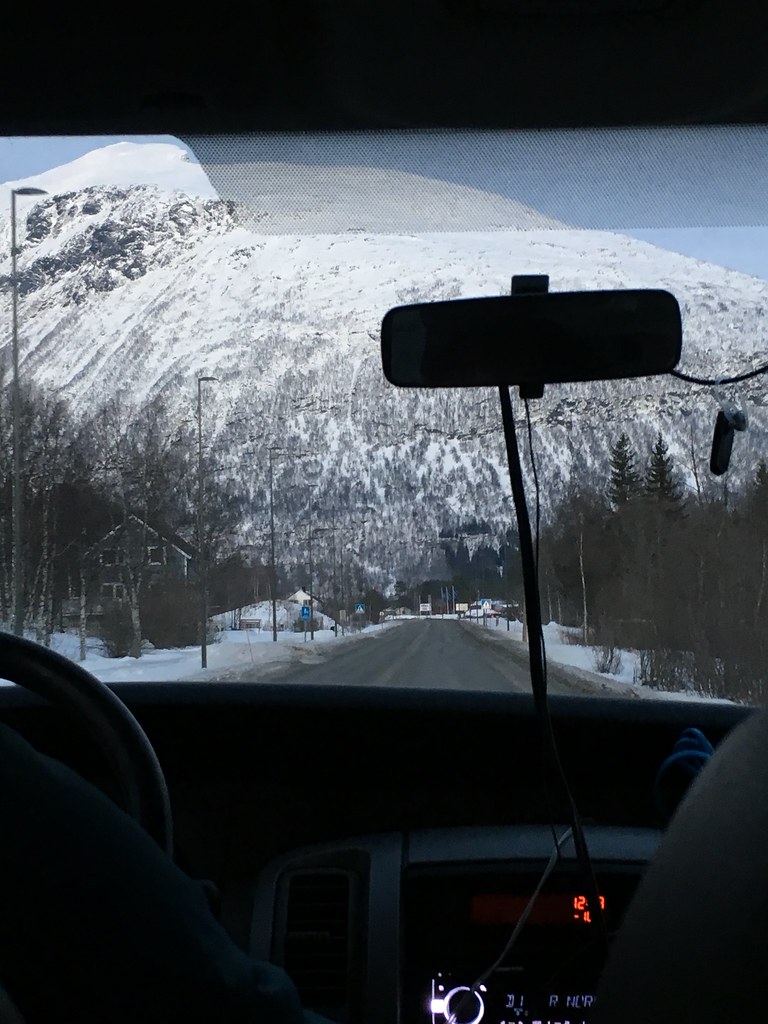 It took 8 long hours to reach the little village of Skrolsvik in the lonely south west corner of the island. We arrived at around 3pm and were absolutely wiped out. It felt like 11pm and I was ready for bed. I think the problem was watching the sky lighten and go back to pitch black while we sat in the car all day, it really messed with my body clock. We were welcomed by our hosts family in their sweet, traditional Norwegian home which was decorated with handmade festive trolls and fairy lights. 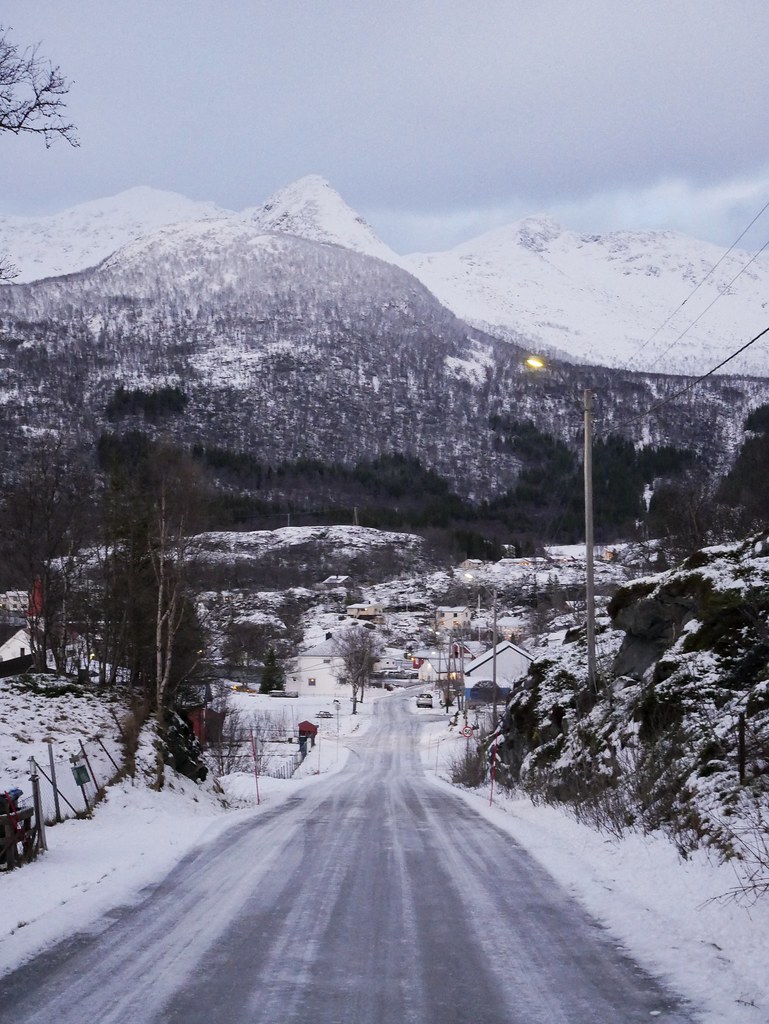 We were actually staying in a different property down by the sea and much to my excitement it was a Rorbu which is a traditional fisherman’s cabin with bright red wooden walls. The inside was renovated with a cozy, modern interior including giant halibut shaped cushions and a nice feature wall with original wood and names carved into it from the old workers. 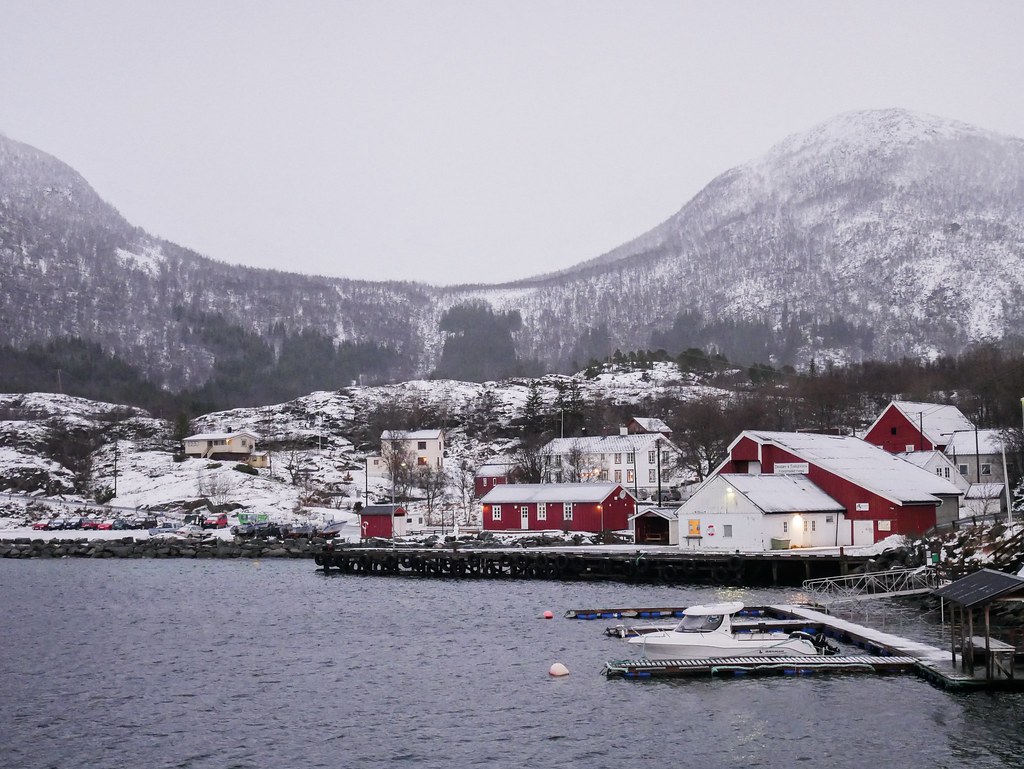 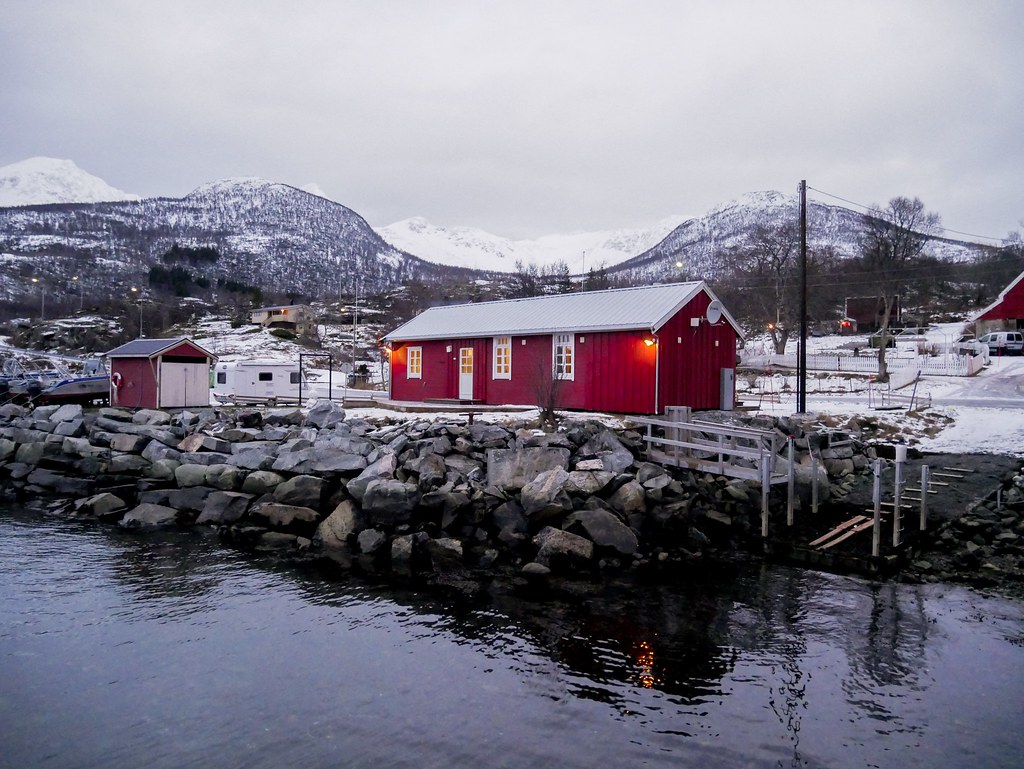 The weather was dreadful for our 5 days in Senja, we had snowstorms, strong winds, sleet and mist – the full shit-weather package. We did manage to get out in the car one day to do a roadtrip around the island though. Skolsvik was right by the sea so we basically had sleet instead of snow but as soon as we drove inland things quickly improved and snow surrounded us. Senja is home to many free-roaming reindeer who are all owned by Sami (the indigenous people who live in the far north of the country). Within ten minutes of driving we came across two in a snow covered field beside the sea. We quietly pulled up to take photos, slowly opening our doors to keep the noise down but it didn’t seem to matter as one confidently walked right towards us. 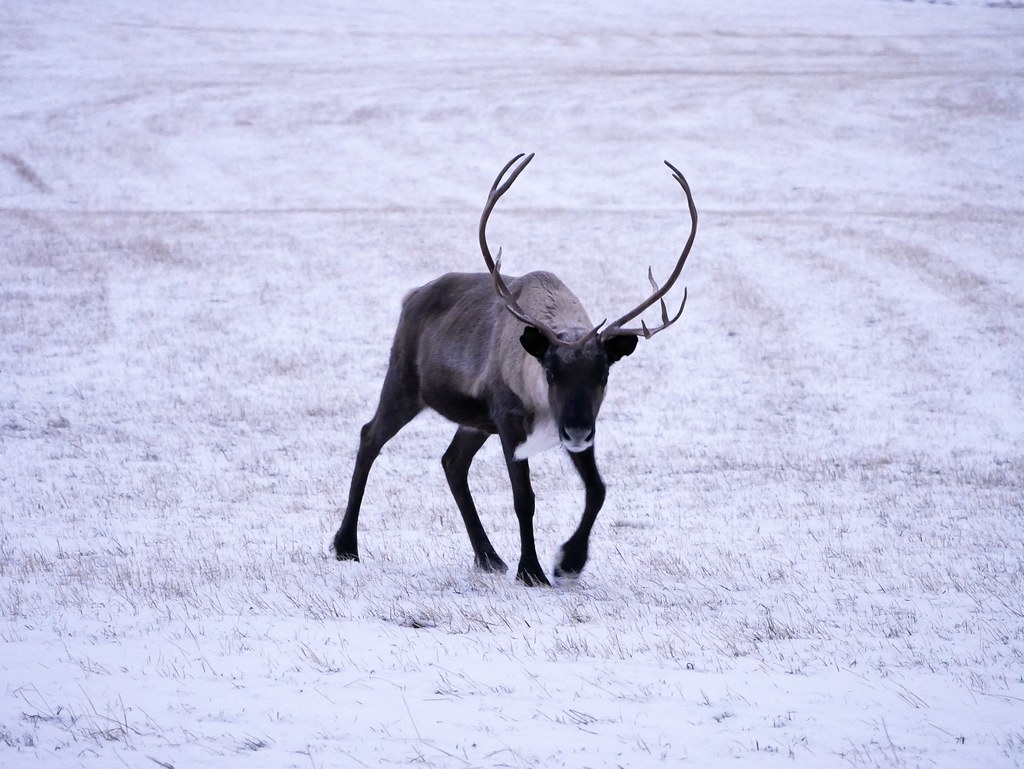 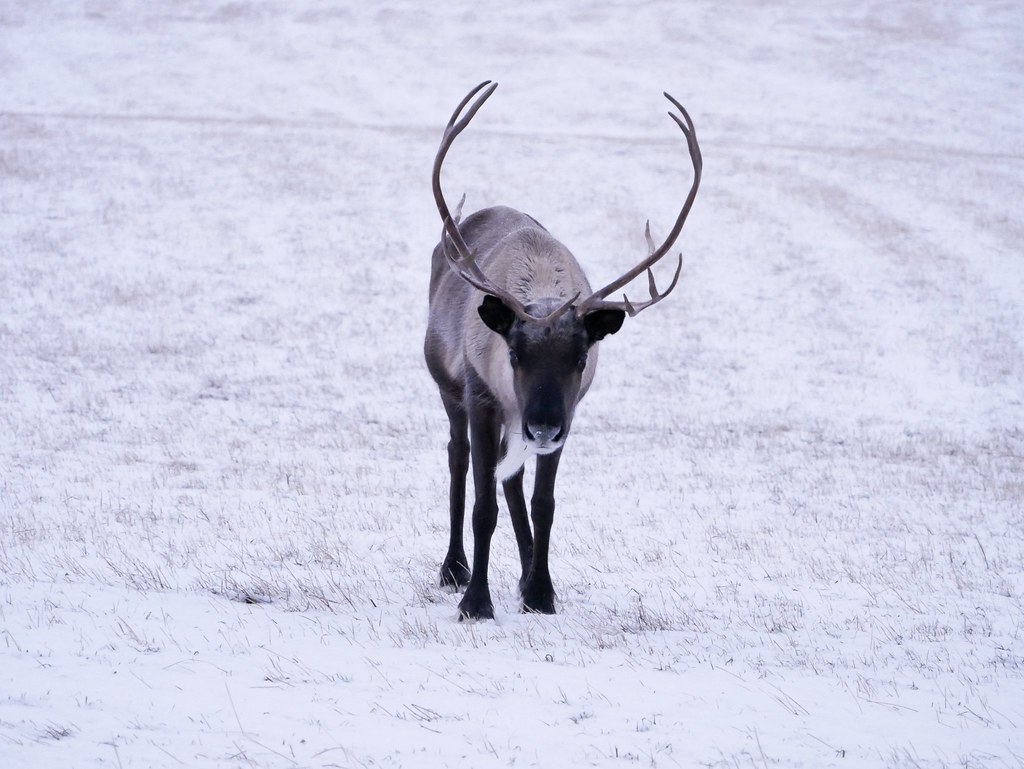 We continued the roadtrip through the heavy falling snow and passed some really beautiful spots with trees caked in fresh powder. We pulled over to play in the foot-deep snow but beneath it was a sheet of ice which Craig slipped on and ended up doing a snow-angel to cover up his accident. There were no other cars on the road, I guess the weather put everyone off and it’s a pretty sleepy place in winter anyway. After some twists and turns and driving through mountain tunnels we reached Bergsbotn which was a manmade viewing platform right above the Bergsfjord. The sky was filled with low lying clouds but the shape of the dramatic mountains were just about visible and I was gutted we couldn’t see them in their full glory. The road headed steeply downhill and along the edge fjord but we didn’t drive much further before we decided to head back. The weather was awful and it was already getting dark at 2pm so we gave up. 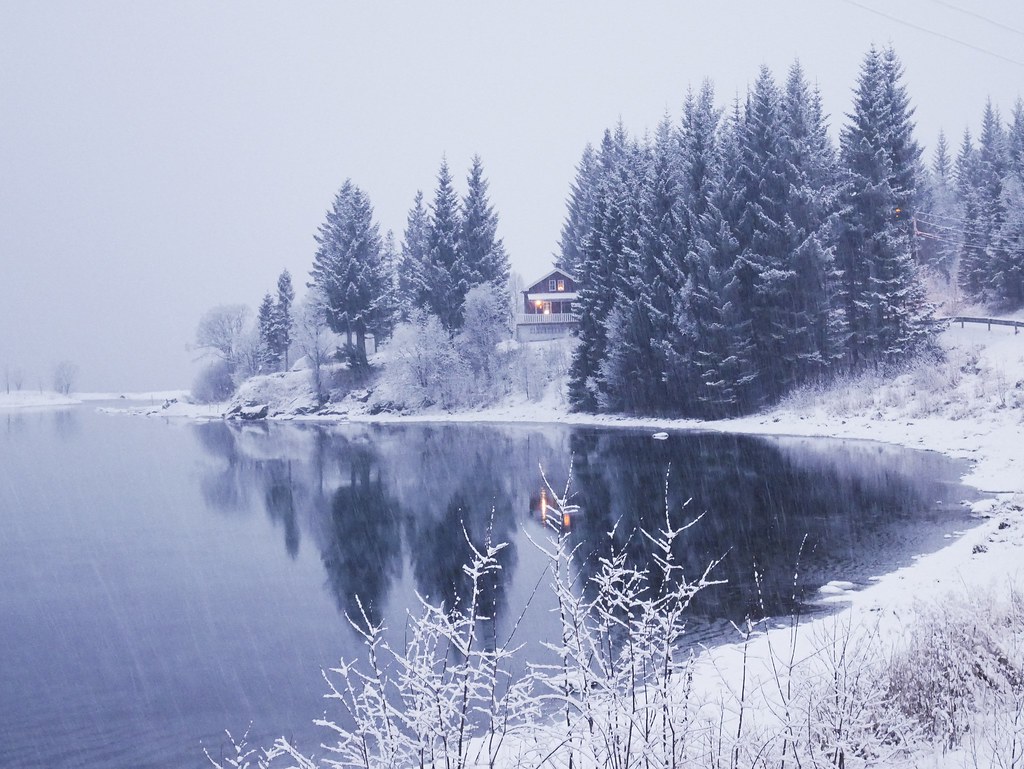 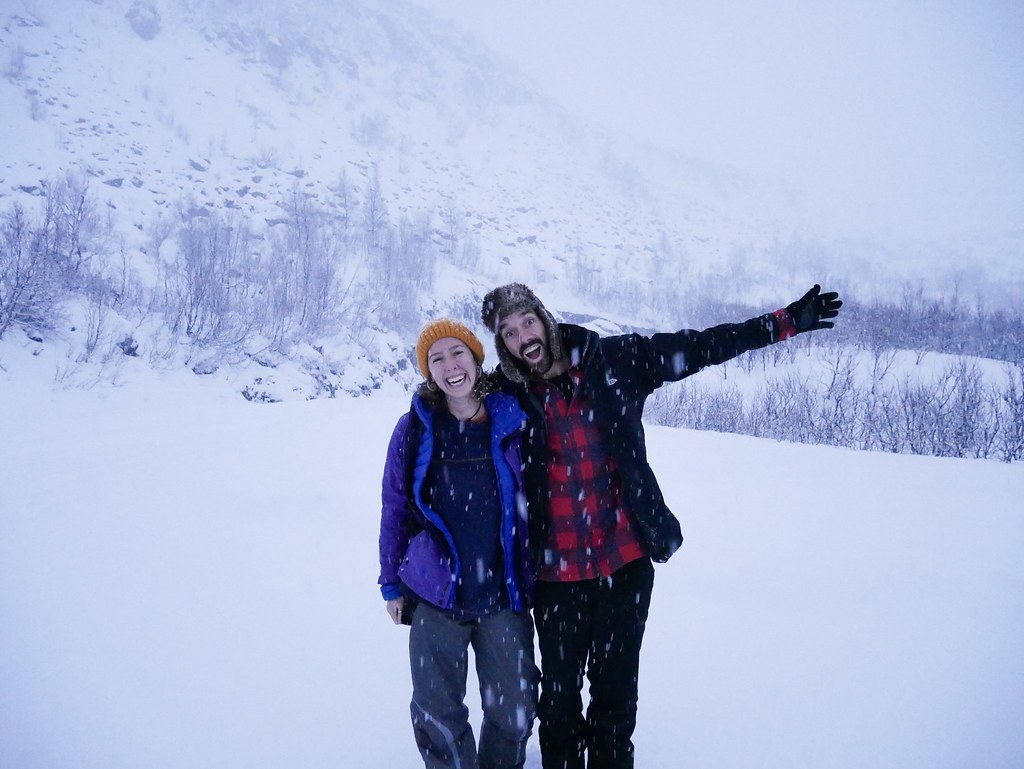 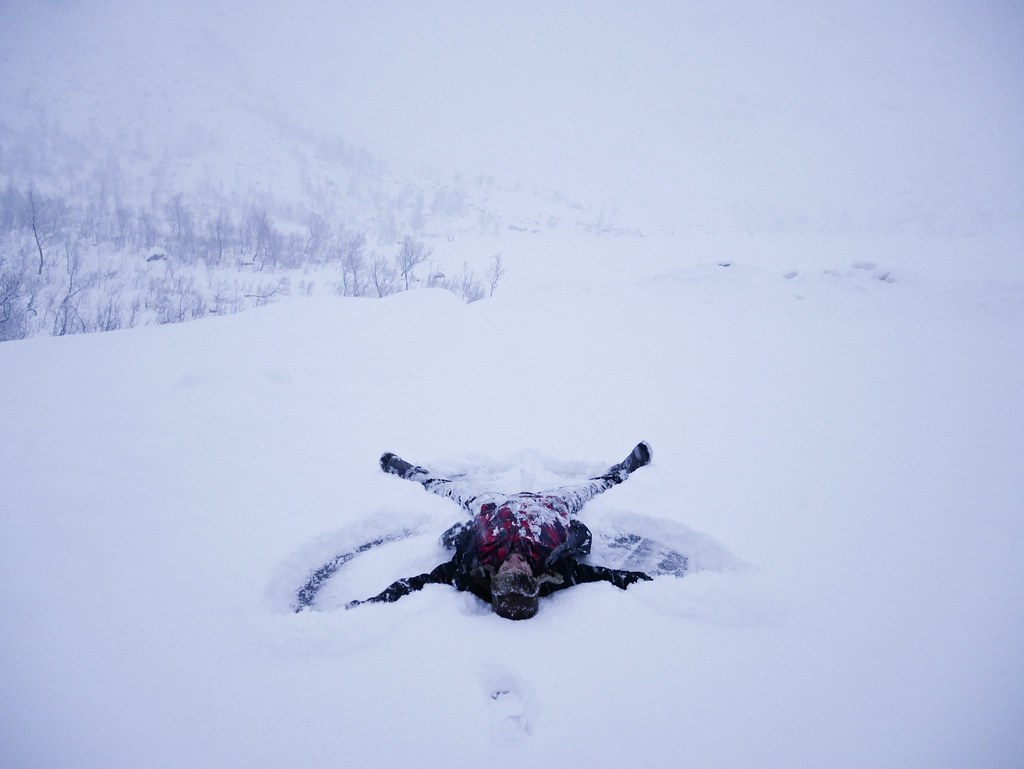 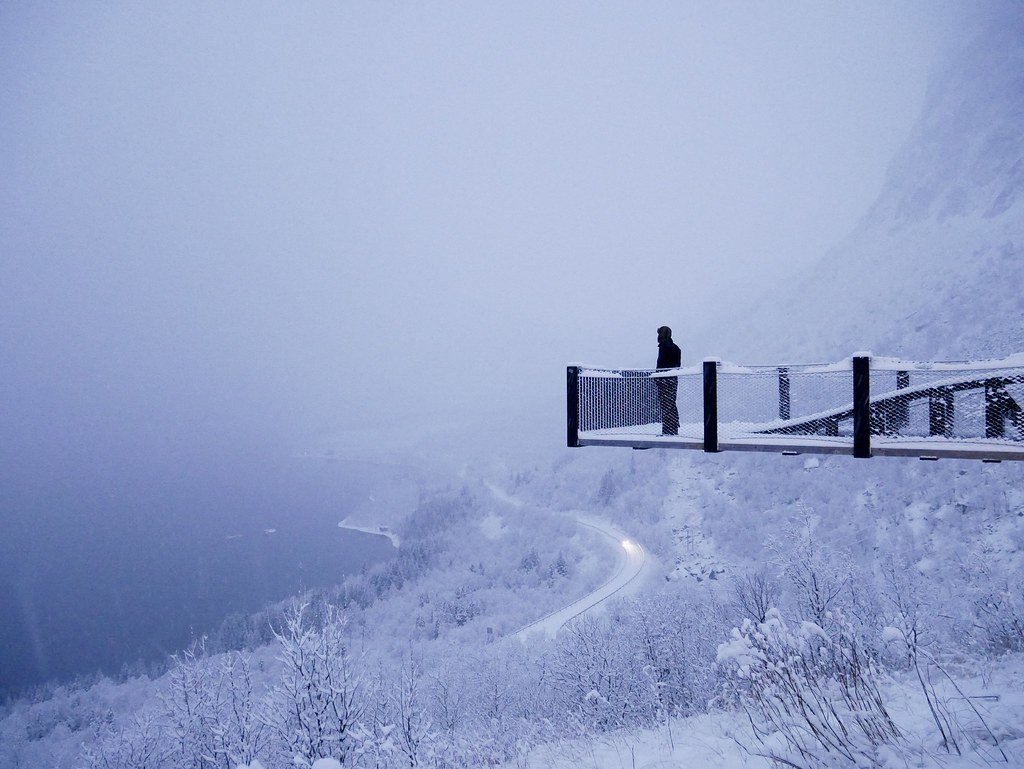 There was an old military camp in Skrolsvik which we explored another day. It was built beside the sea and after being sold for a campground business it now sat completely unused and had a ghost-town vibe. Craig actually went there a few days earlier at dark to explore the old bunkers with torchlight. He was elated when he came back saying “you’d love it Lauren, there were so many creepy rooms to explore, I’ll have to show you tomorrow!” No thank you! It sounded bloody scary and he’d have to pay me good money to go in a vintage bunker with crumbling ceilings and ghosts lurking in dark corners so we went back in daylight to just explore the grounds. There were some seriously creepy abandoned buildings with smashed windows and locked doors. I kept looking through the windows expecting to see a face in the darkness…it would freak me out and I wouldn’t sleep for days yet I kept looking, a bit like when there’s an awful smell and you can’t help but keep sniffing. For some reason Craig was expecting me to get the urge to look inside the bunkers so he spent ages hiding in numerous entrance-ways waiting to jump out at me. I was blissfully unaware as I didn’t go into any of them and instead I shouted his name through the piercing wind as I couldn’t see him anywhere and thought he was lost. 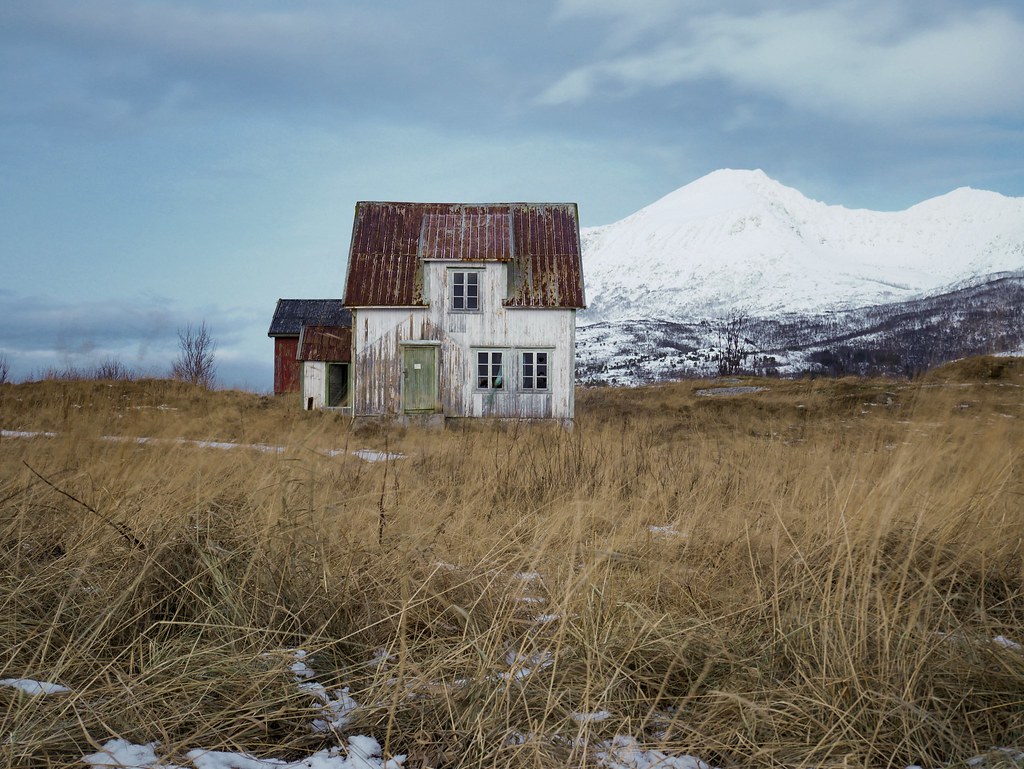 A stunning white sand beach curved around the camp and if it wasn’t for the strong winds and big, brown snow cloud creeping up on us I could imagine it being quite an idyllic spot for a swim in summer. Beside the beach was a washed up boat which Craig quickly found a route up like a pirate taking over a ship in Somalia, running along the decks and exploring the captains bridge. 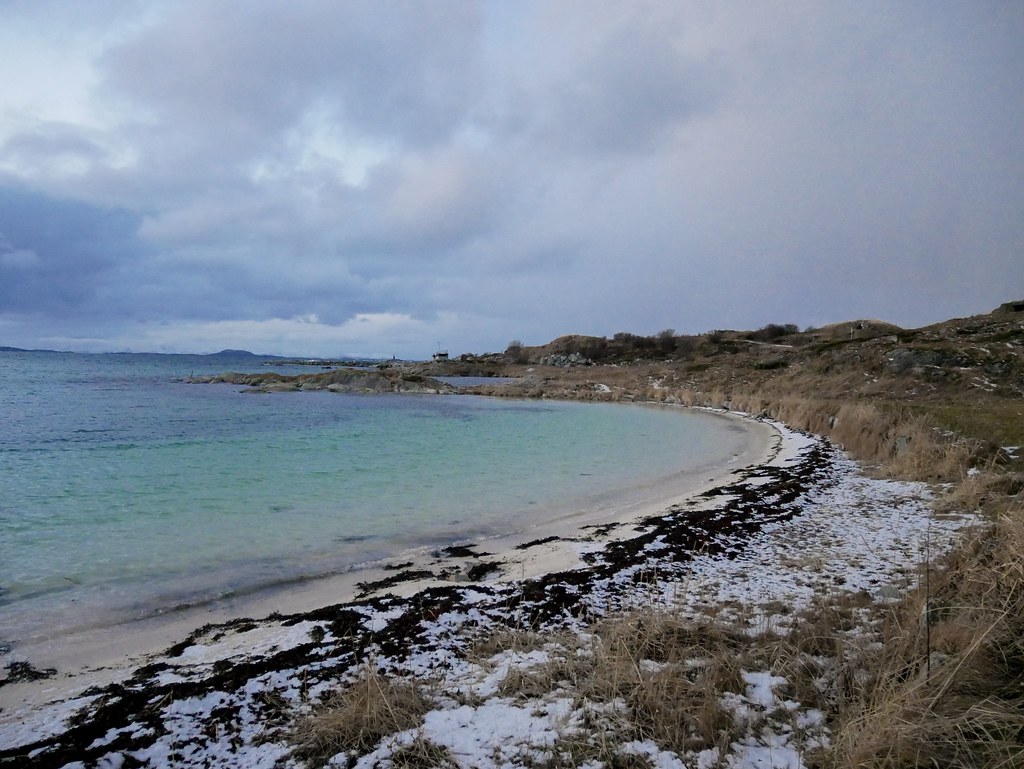 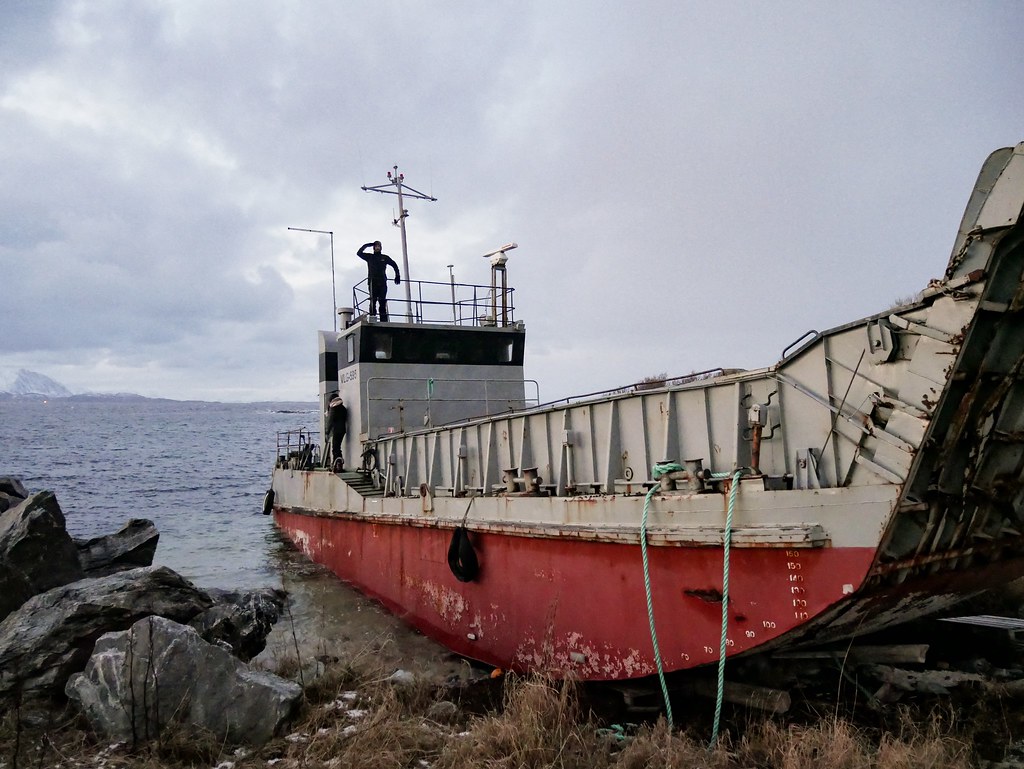 Christmas was quite different in Norway compared to the UK. They celebrate it a day early on the 24th of December and they eat some interesting things which would never be found on a plate in England. They typically have roasted pork belly, Pinnekjøtt which is dried and salted lamb ribs that requires soaking in water before boiling and then the crème de la crème is Lutefisk which is dried cod that has been soaked in a lye solution for a few days to rehydrate it. Lye is a chemical used for cleaning, particularly in soap products. It’s pretty strong stuff and can lead to skin burns, blindness or even death if digested. So the Norwegians like to use it for their fish, yum! Only a small quantity of lye is used so it’s harmless to eat but by god the smell of Lutefisk is enough to knock someone unconscious.

Luckily Norwegians also eat a lot of vegetables too so I was well fed with boiled potatoes, mashed peas, red and white cabbage and brussel sprouts with a lingonberry sauce and gravy too. Our hosts family divorced many years ago so after Christmas dinner at the mums we headed to the other side of the family about 30 minutes drive away. As we stepped out of the front door though we were shocked to see reindeer prints literally by the front door!!! The reindeer had vanished but we were all so excited to have them outside on Christmas.

So we headed off in another blizzard to the dads house where we had another traditional Norwegian dish of Julegrøt which is rice pudding mixed with whipped cream and either served with sugar and cinnamon or with a berry sauce. It’s delicious! We managed to walk down to the harbour with our rapidly growing food babies to check out the full moon reflecting in the sea. 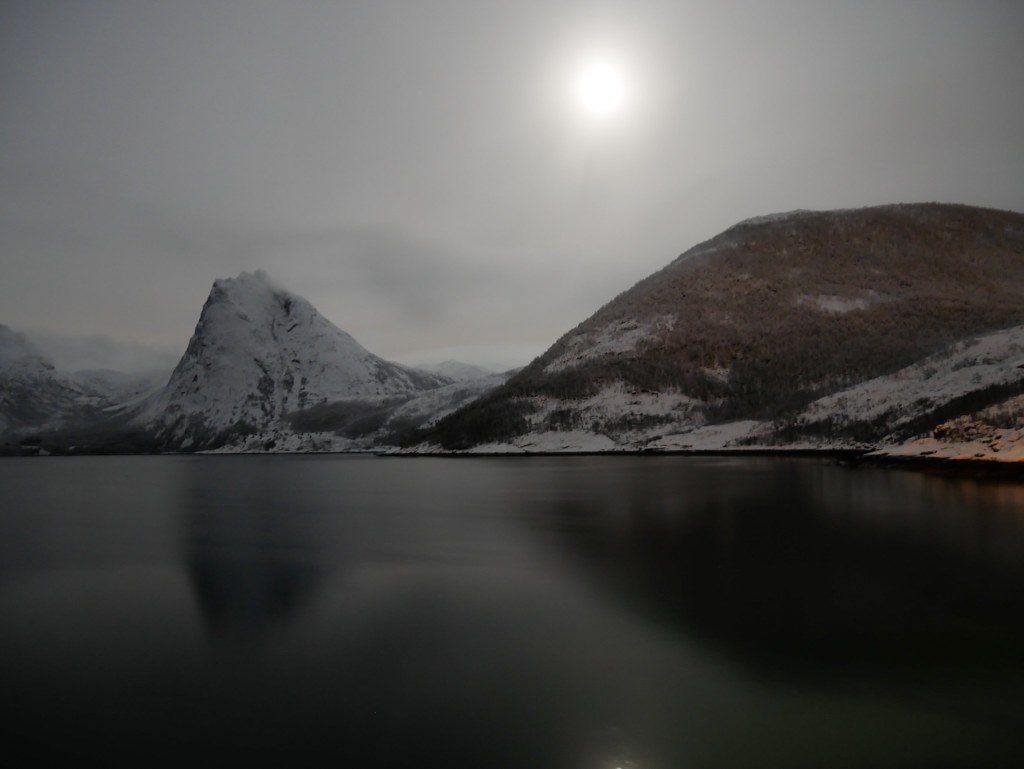 Our village had a small snowfall for Christmas and it was really heavy and wet so within a couple of rolls I’d made a snowman named Roger and plenty of snowballs which I threw at the windows of our Rorbu to encourage the others to play in the snow…it didn’t work and they laughed when I returned, saying they’d forgotten I was even outside. 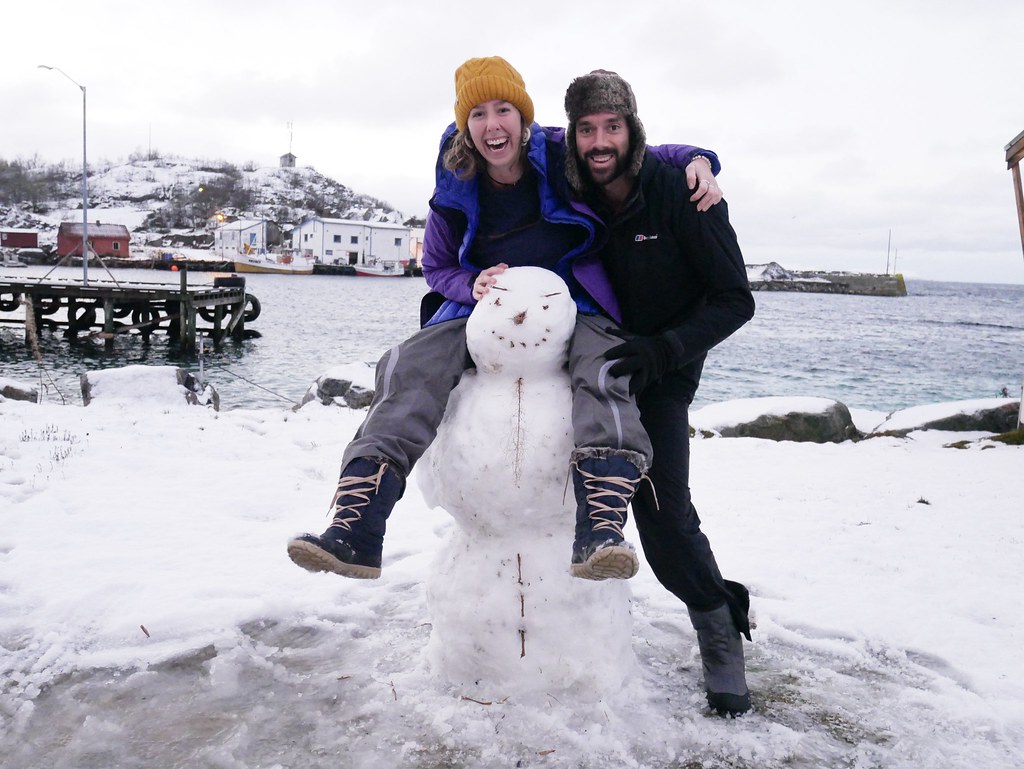 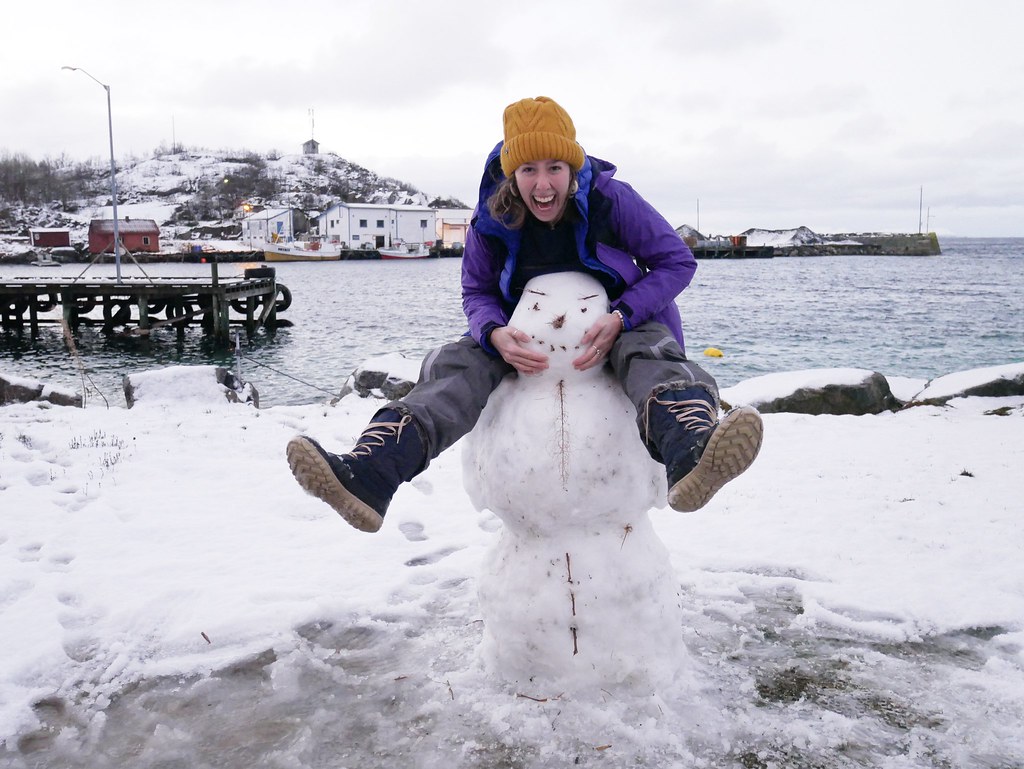 For our final night we finally got to experience a grill hut. Many Norwegians have these in their gardens and it’s basically like a little, wooden wendy house. This one was covered in pretty fairy lights and stepping inside felt like a scene from Narnia as it was so much bigger inside than we’d expected. In the centre was a roaring fire pit with a big chimney and around the edge was enough seating for about 20 people at a tight squeeze. There was a mini-fridge in the corner, mugs and glasses hanging on the shelves, a special metal rack over the fire to cook sausages and a pot for coffee. I didn’t want coffee as it was way too late at night for me but I loved that it was made on the open-fire so I had a small mug of the strong stuff while the others ate sizzling sausages. It was such a cozy hut and the perfect end to our first Norwegian Christmas. We were treated like family the whole time and fed way to much food, but it’s Christmas so we’ll just stick with getting fat in December as it’s tradition.

We headed back to Vesterålen in more dreadful conditions with icy roads and heavy snow. We stopped at a waterfall to stretch our legs and the area was almost thigh-deep with snow. We were sinking down and shaking heavy trees until all the branches were relieved of snow. The drive home took 8 hours again and we were exhausted when we got back. The final 3km section of road leading to our village was a death-trap of black ice and we almost couldn’t walk across the road. We were waving our arms in anticipation of falling over like kids on an ice rink, one slip down and we risked sliding down towards the sea! There’s almost no snow in our village now but it feels good to be back home. 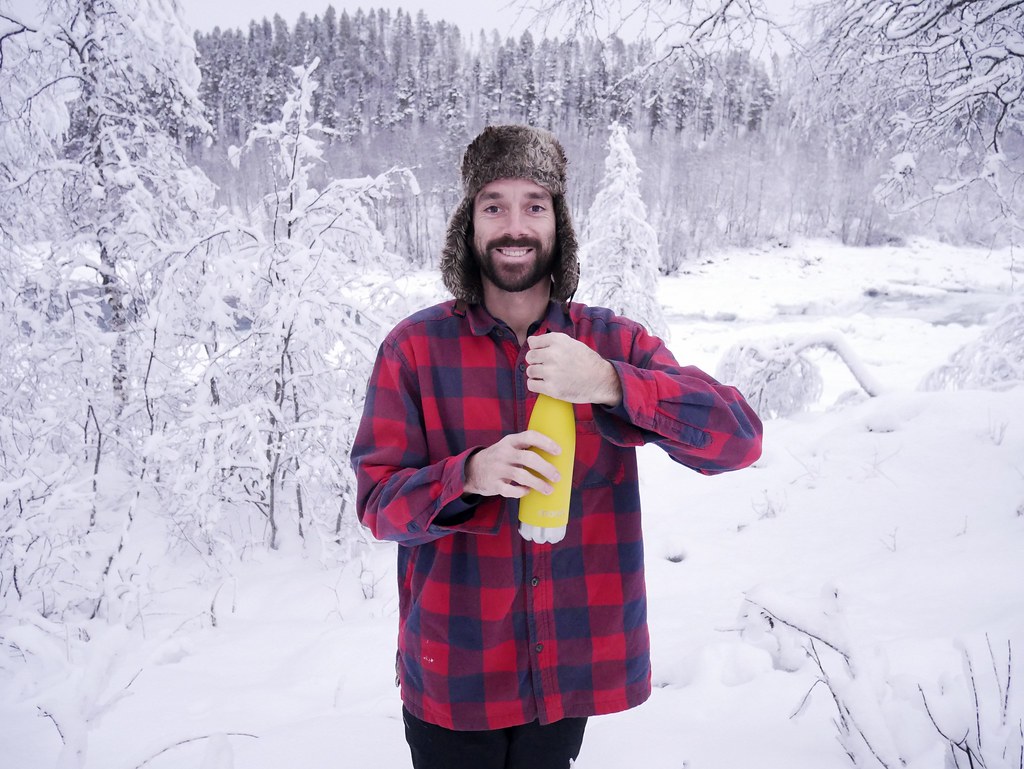 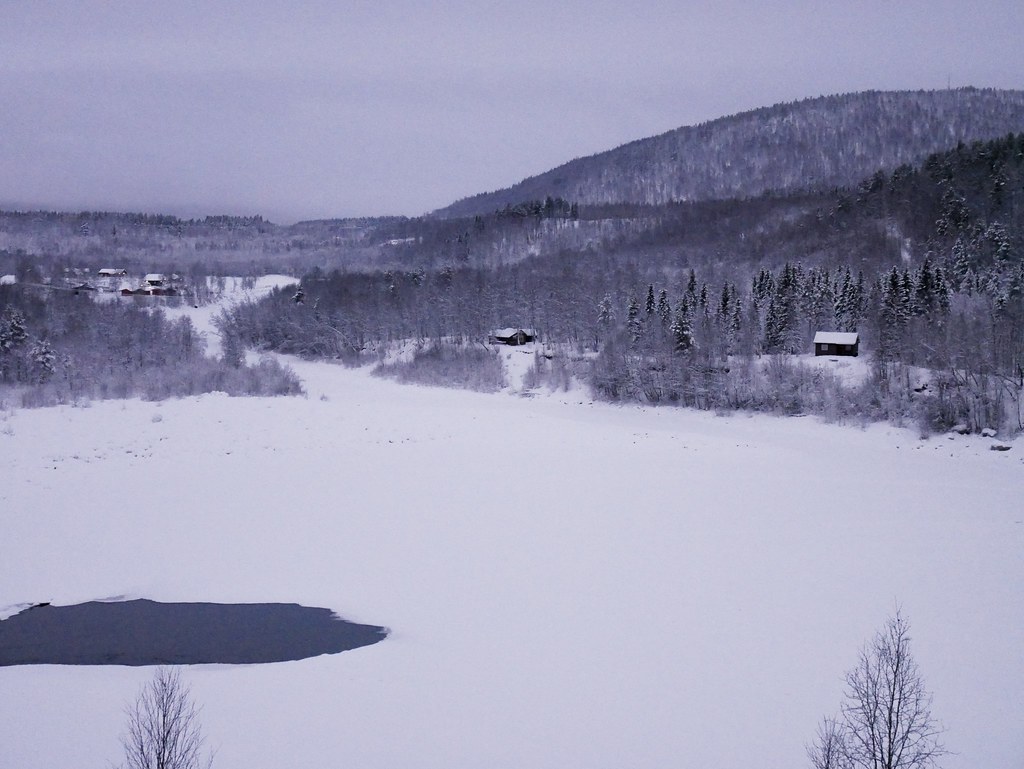 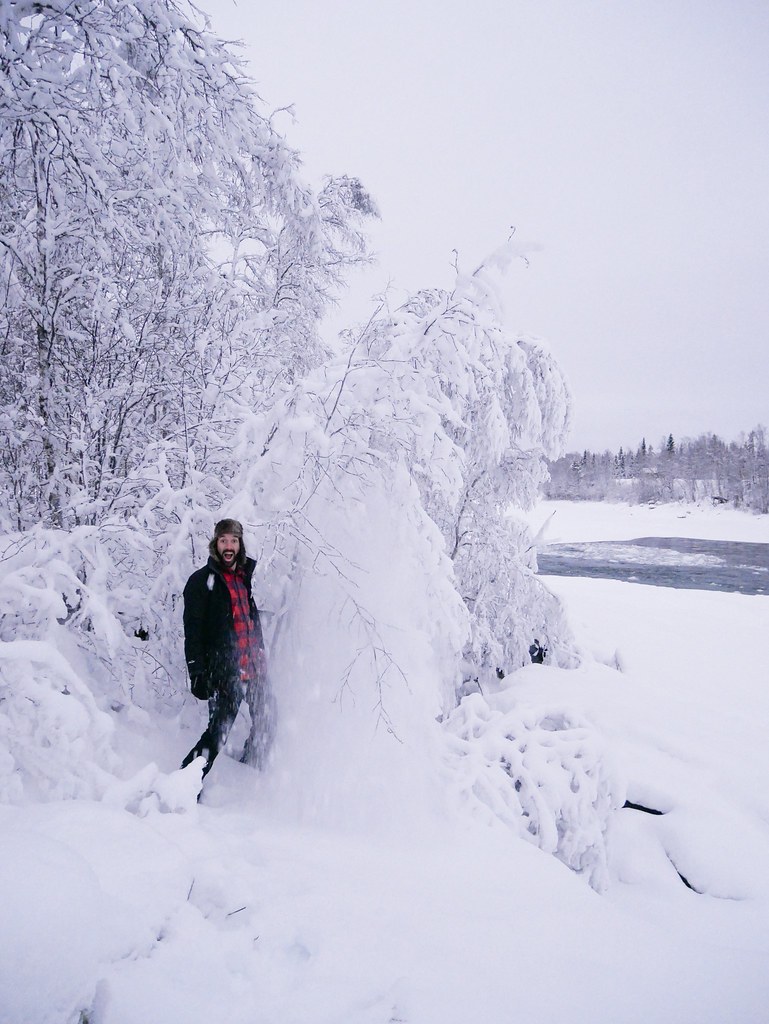