It was a crisp autumn morning and we were excited to go on a little adventure to a famous German castle. We stepped off the train in the tiny village of Moselkern and were reminded that no one seems to live in Germany…every village is empty and they don’t even have corner shops like they do in England. Metal shutters are pulled down and we’re often left wondering if we’ve missed the latest news report about an apocalypse and everyone except us is in hiding. 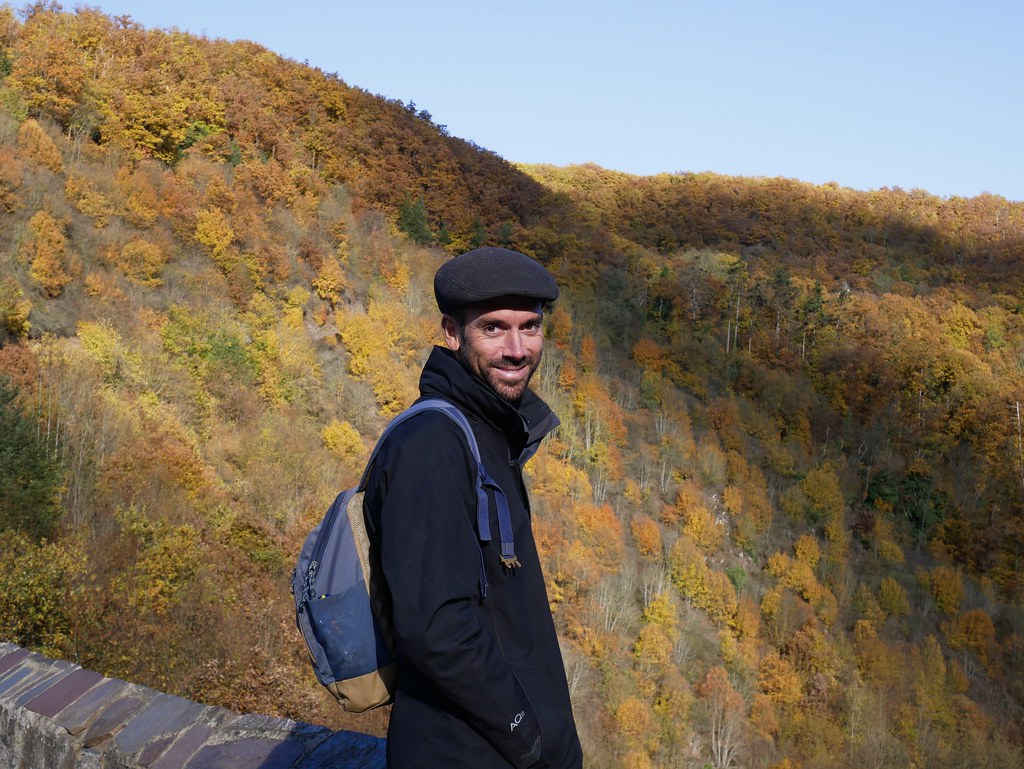 We left the quiet lanes and headed into the forest where we followed a trail to Burg Eltz Castle. It’s considered to be one of the finest in Germany and its thanks to the Burg family residing in it since the 12th century, occupying it for 33 generations and keeping the property well maintain and restored. The castle has over 100 rooms and 8 towers which have up to 8 stories in them…if only city high rises looked this good. 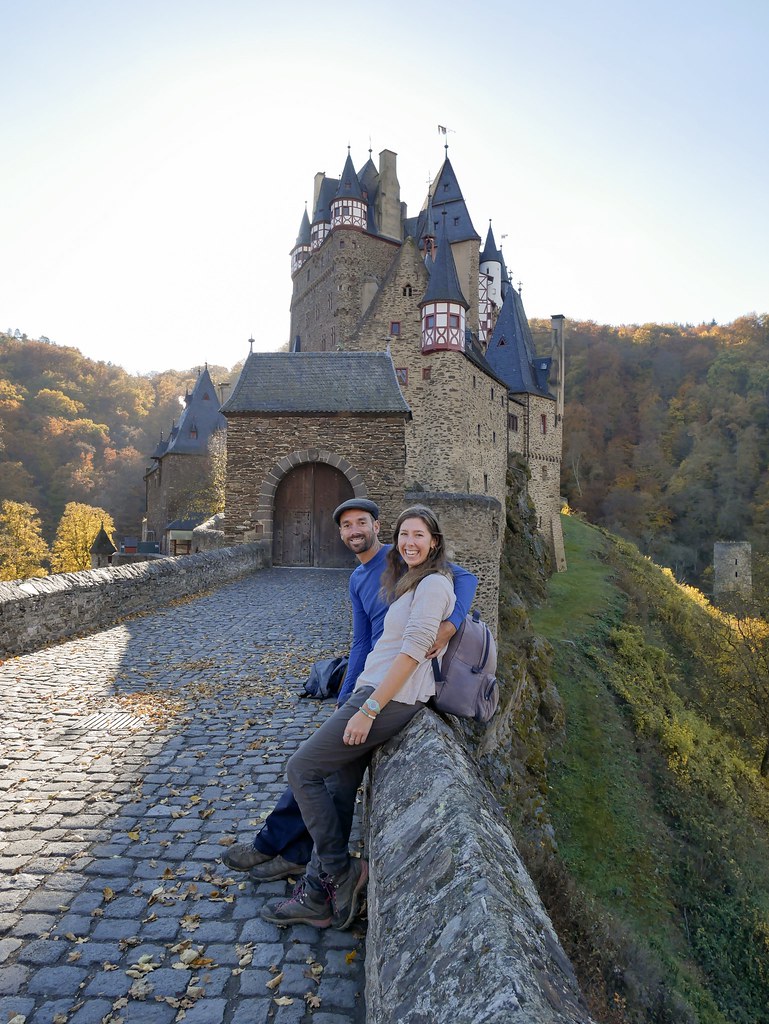 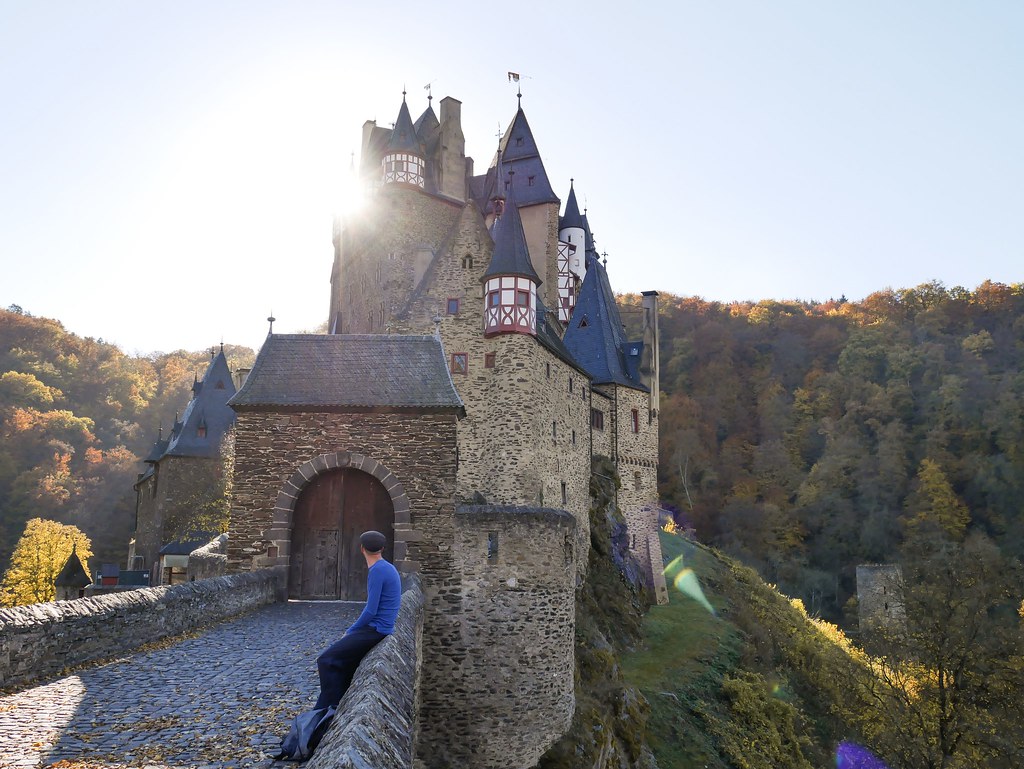 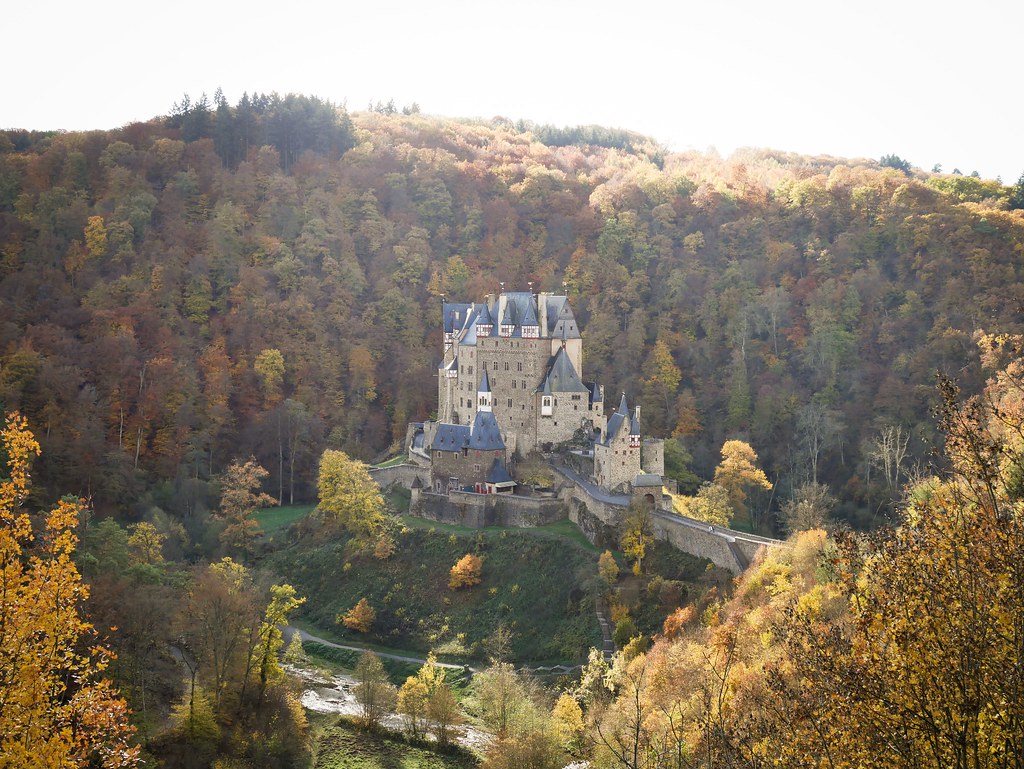 The castle was in a bit of a vulnerable location, not atop a hill with a vantage point, but in the middle of a valley with high forested hills on both sides and a meandering river below. Luckily they’d built it on a 70m rock which helped gain a bit of a view, or maybe it was just a snooty rich thing to do so they could look down on the peasants and employees who lived in the village below the castle. A cobbled road led to the grand entrance but we couldn’t enter as tours don’t run in winter. We didn’t mind though, in fact it meant we had the place almost to ourselves. 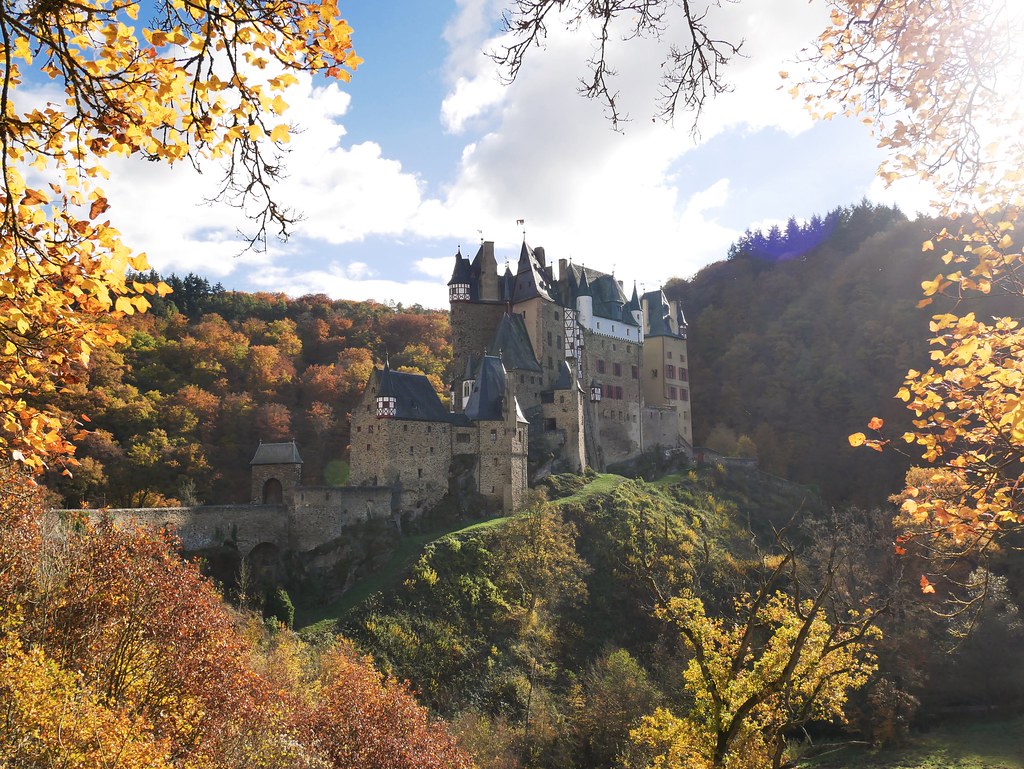 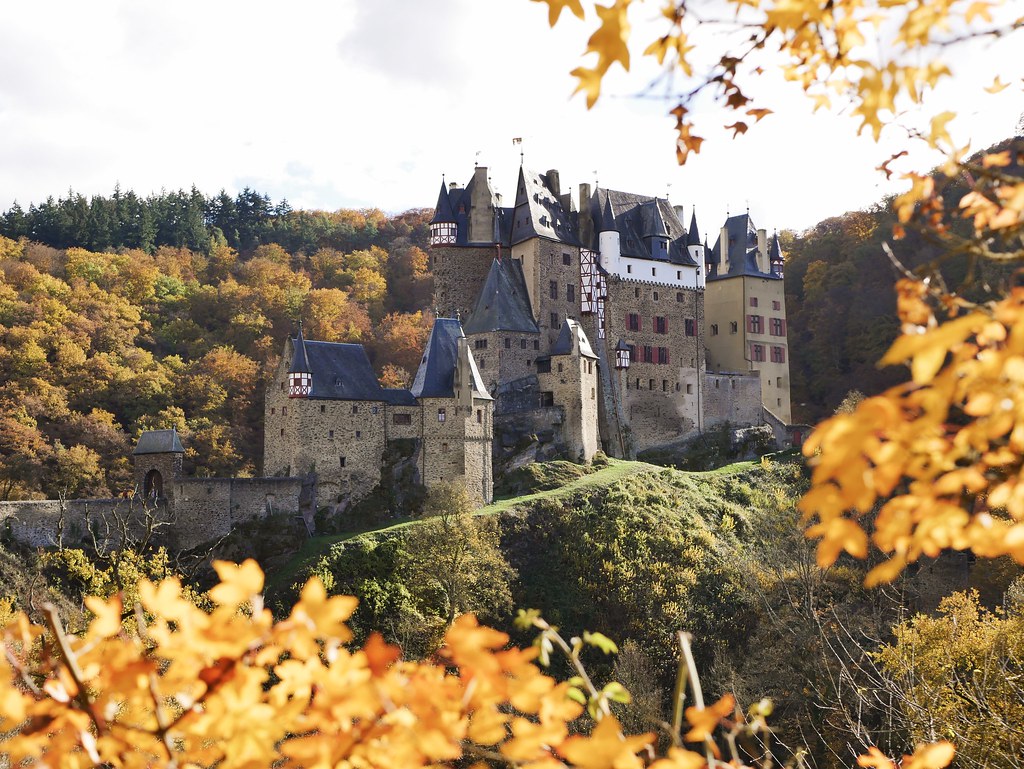 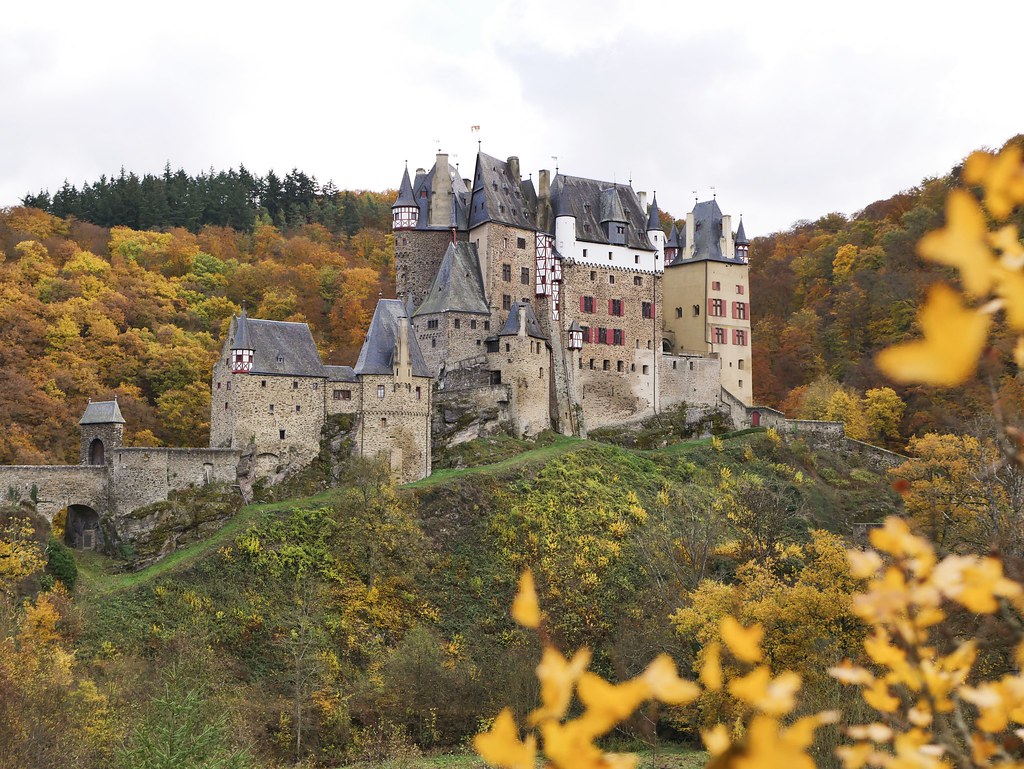 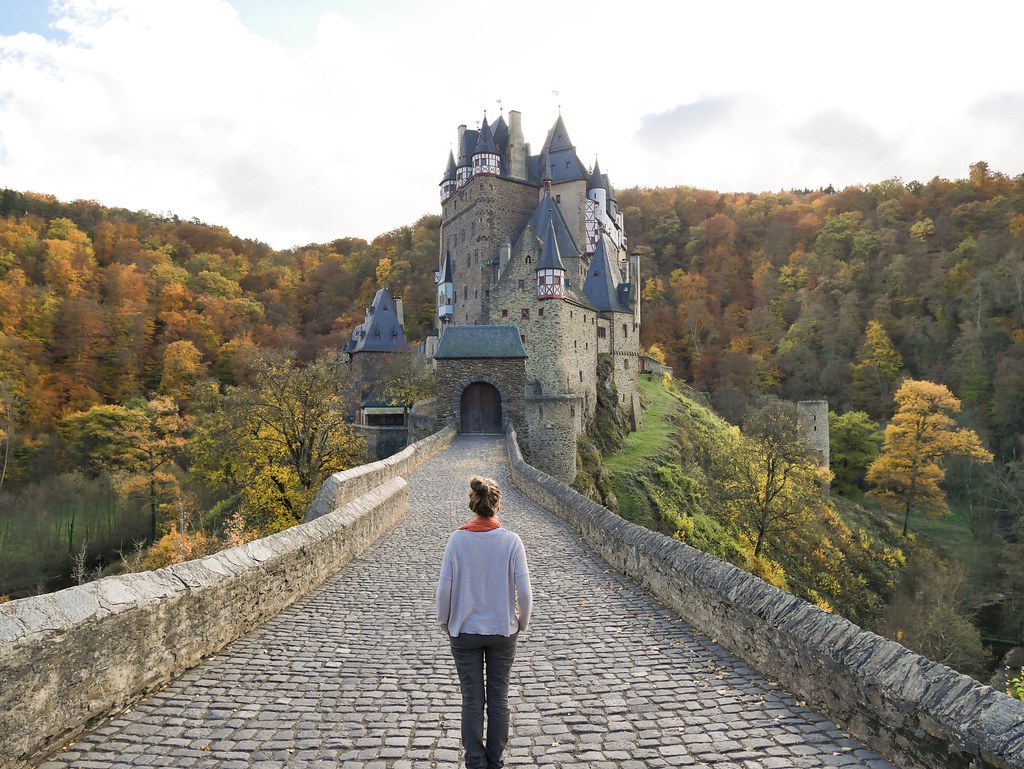 It was a quintessential fairy tale castle that looked more like a movie set then real life. We walked around the grounds and up a hill to gain different vantage points and it looked incredible from every angle. The scenery helped a lot though as the trees were in full autumnal bloom with ochre and desert-coloured leaves filling the hills all around us. We took a different route back, thus creating a lovely loop trail to Müden. The trail climbed uphill until we stood on a hill along the Mosel Valley with neat rows of grapes growing in the vineyards and the river glistening way below us. 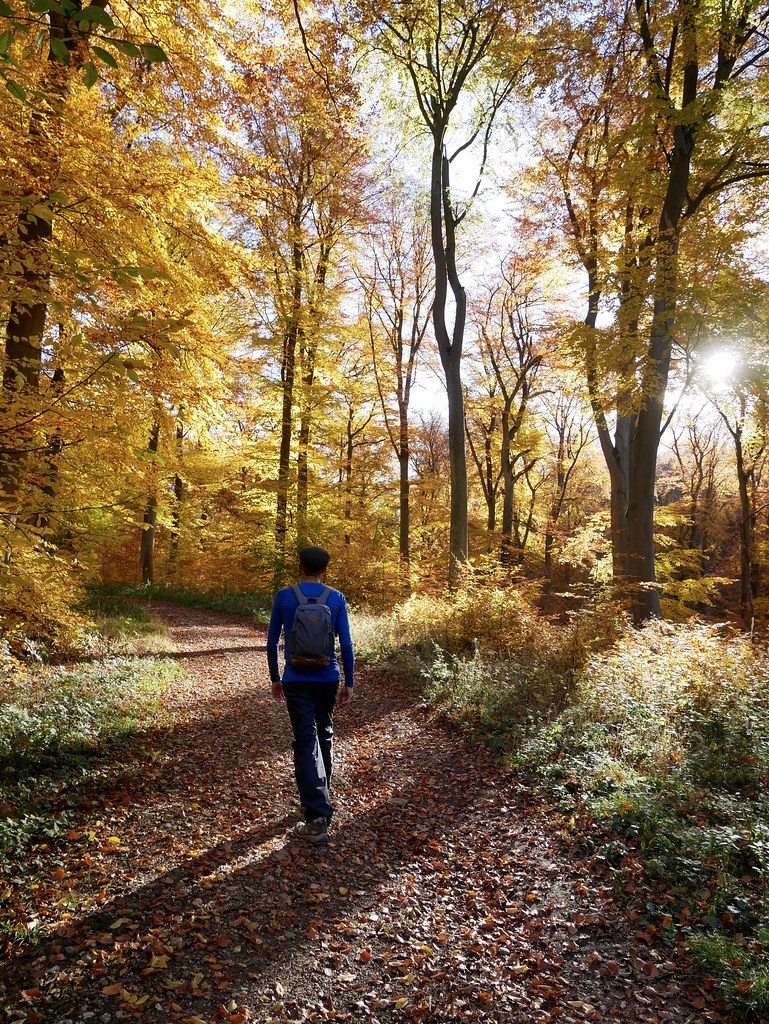 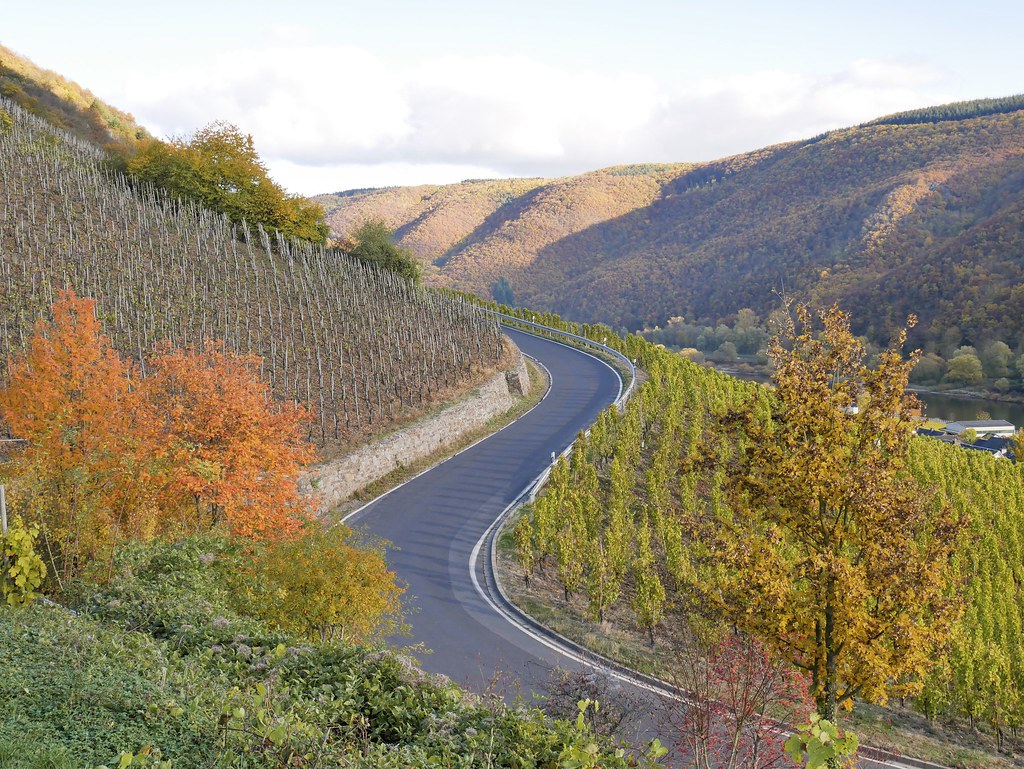 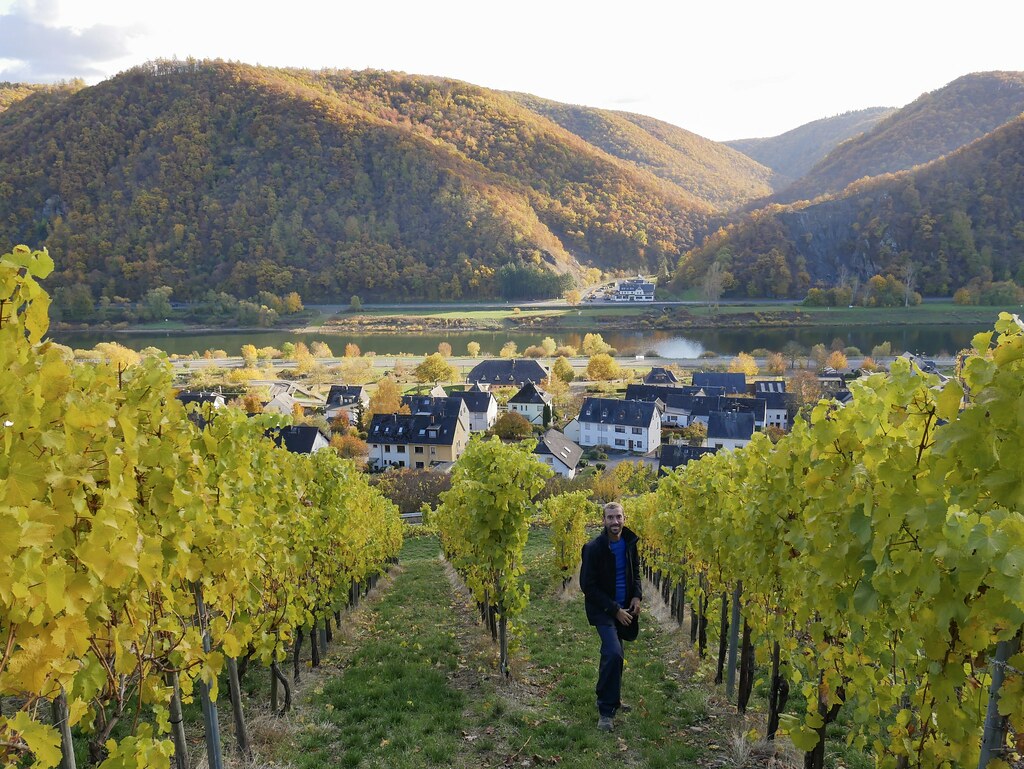 Another day trip took us to the little village of Bernkastel Kues. We had a very misty start to the day but I was optimistic that it would clear. Unbelievably it hung around all day, lingering in the valley like a smoke machine at a kids disco. We could barely see ahead of us as we walked along the bridge to the touristy village. The river was dead-still and the colourful vineyards which occasionally came into view were reflected in the water. The village itself was very sweet with half timbered houses and cobbled lanes – and much to our surprise we weren’t the only humans walking around. Sadly the central square wasn’t very photogenic as workers fixing a nearby building had used it as a parking lot. It was a shame as the buildings with the most character were around the square including an extremely narrow building built in 1416 on the edge of an alley. The house got wider and wider on each level, they say it started off narrow to enable wagons to pass through the lane. But I also read in the medieval times the house taxes were charged depending on the area of the house foundation, so many people built the ground floor really small and the other stories jutted out. 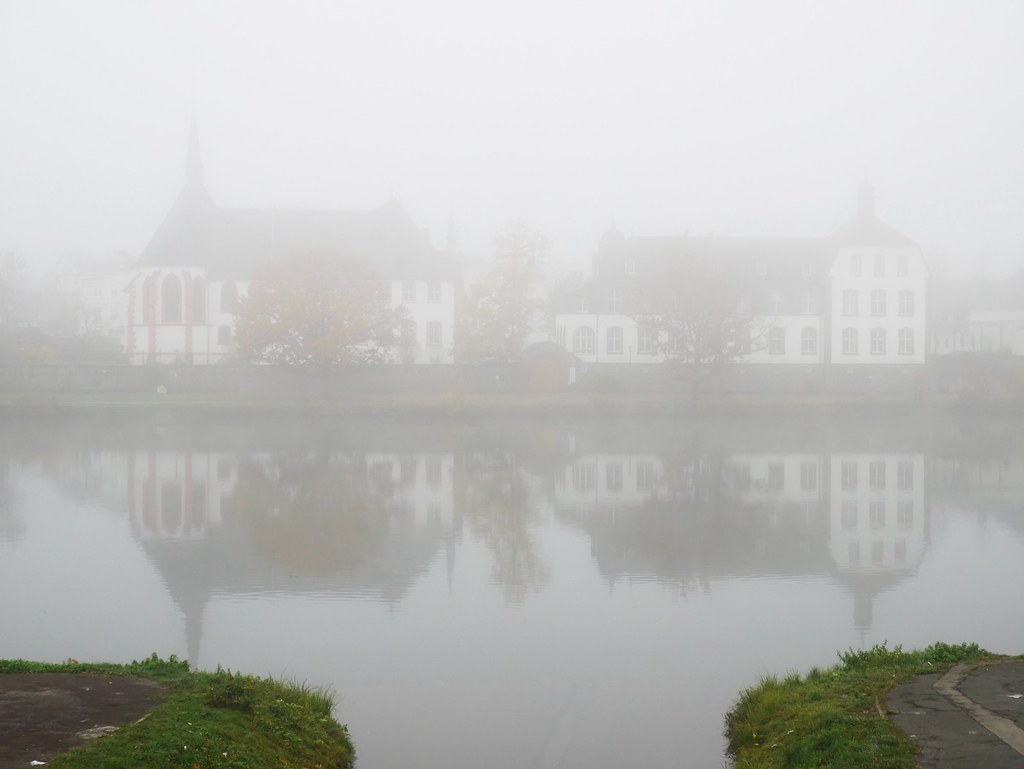 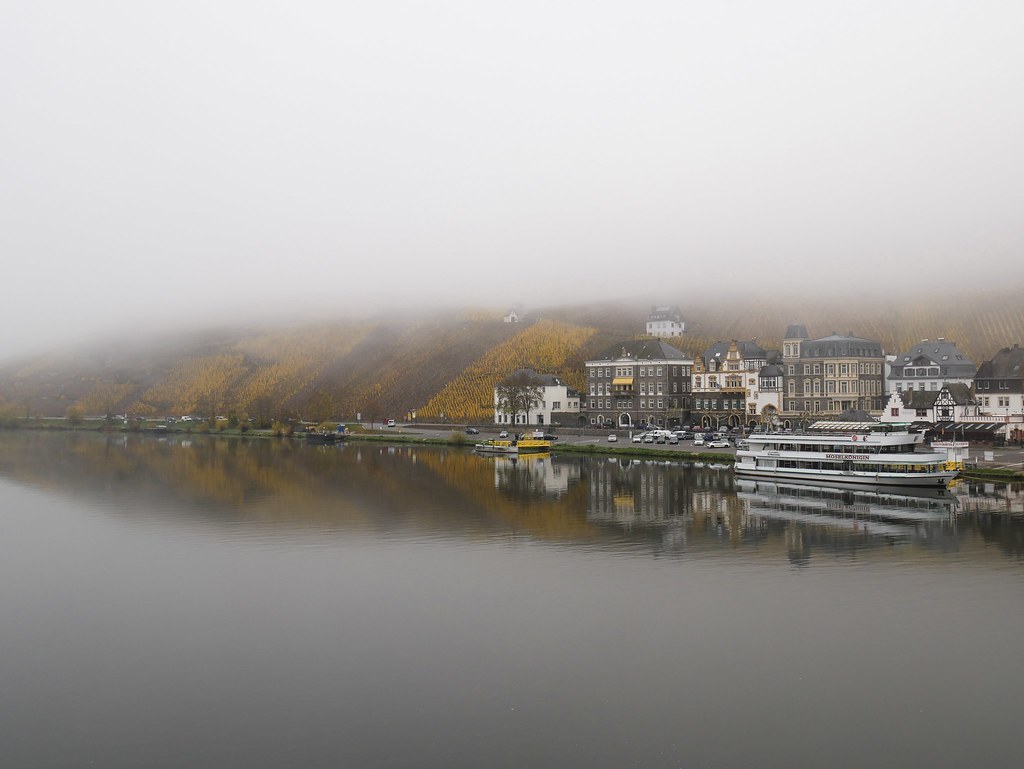 We wandered around all the lanes and past tacky shops and then we settled in a traditional German restaurant for lunch. I had an extremely greasy potato rosti and mulled wine while Craig had a pork dish. It looked very pink inside so he enjoyed his meal while I continuously questioned the safety of him eating undercooked pork while trying to contain my gag-reflex. After filling our bellies we took a stroll up the valley to the ruins of an old castle. We were still hoping that the weather would clear but it was a lost cause in the heavy mist so we headed back home. 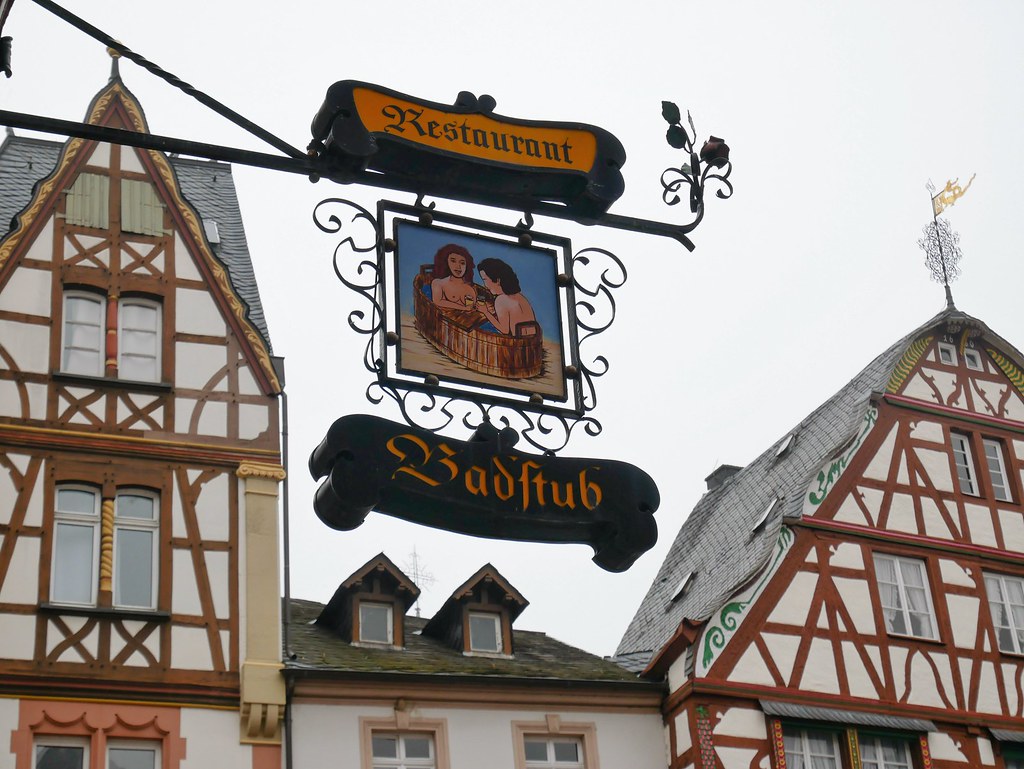 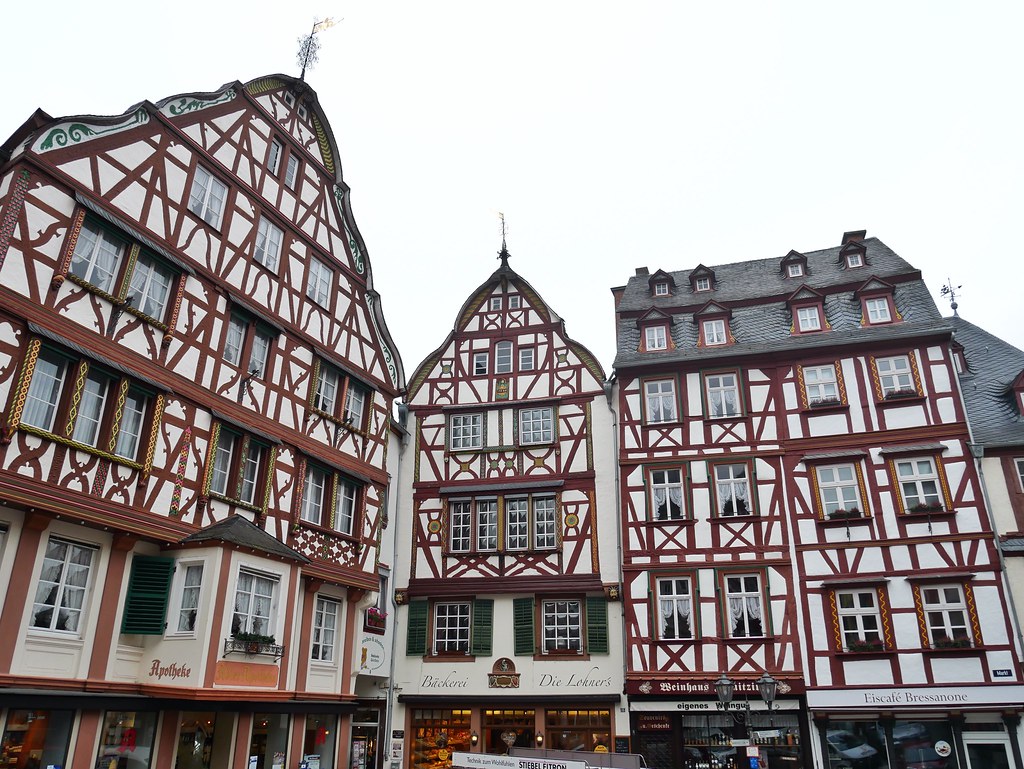 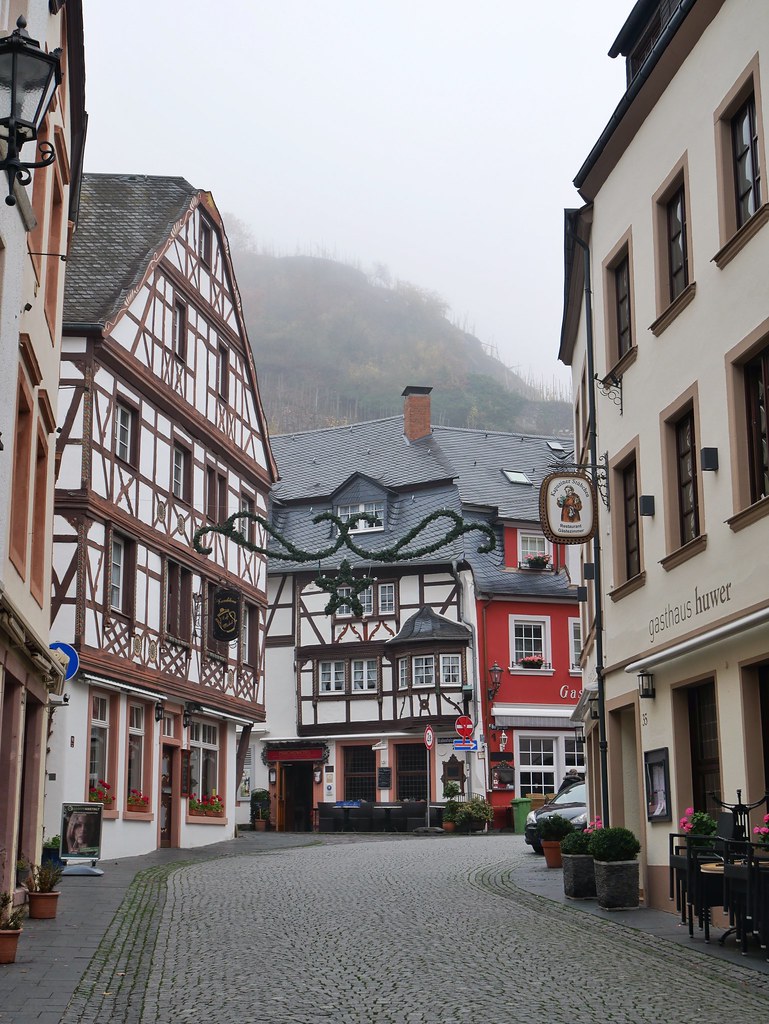 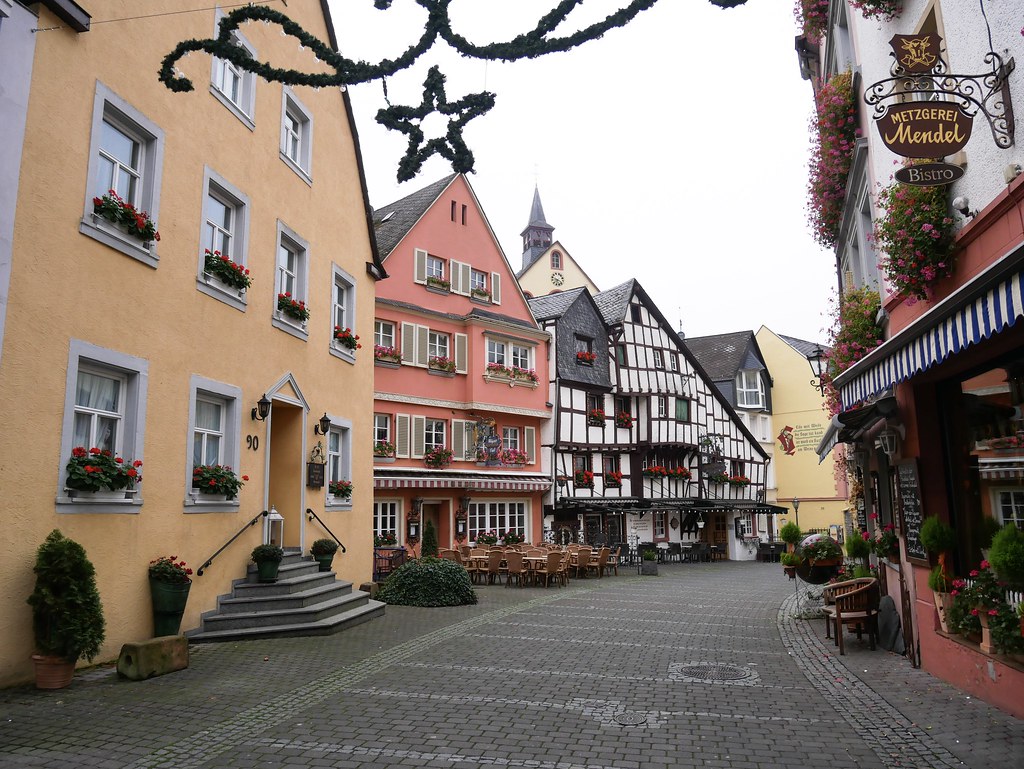 Before we left Germany we visited the Christmas market in Trier which is the oldest city in the country. The main square was encircled by colourful buildings and the centre was filled with wooden sheds decorated in fairy lights and festive flare. They sold mulled wine in sweet novelty mugs and we were under the impression that we could buy the mug for €2 and continue to use the same one for refills all night and then keep it afterwards. But when we went to get our boot-shaped mug refilled the busy workers quickly put it in the dishwasher and gave us a refill in a basic white Trier mug. The lady didn’t speak English but we pointed to the dishwasher and said “wait, that’s our mug, we bought that one!” and she went on to serve the next customer. So then we were committed to getting another refill and hope they gave us a boot-shaped mug in return, thankfully they did! 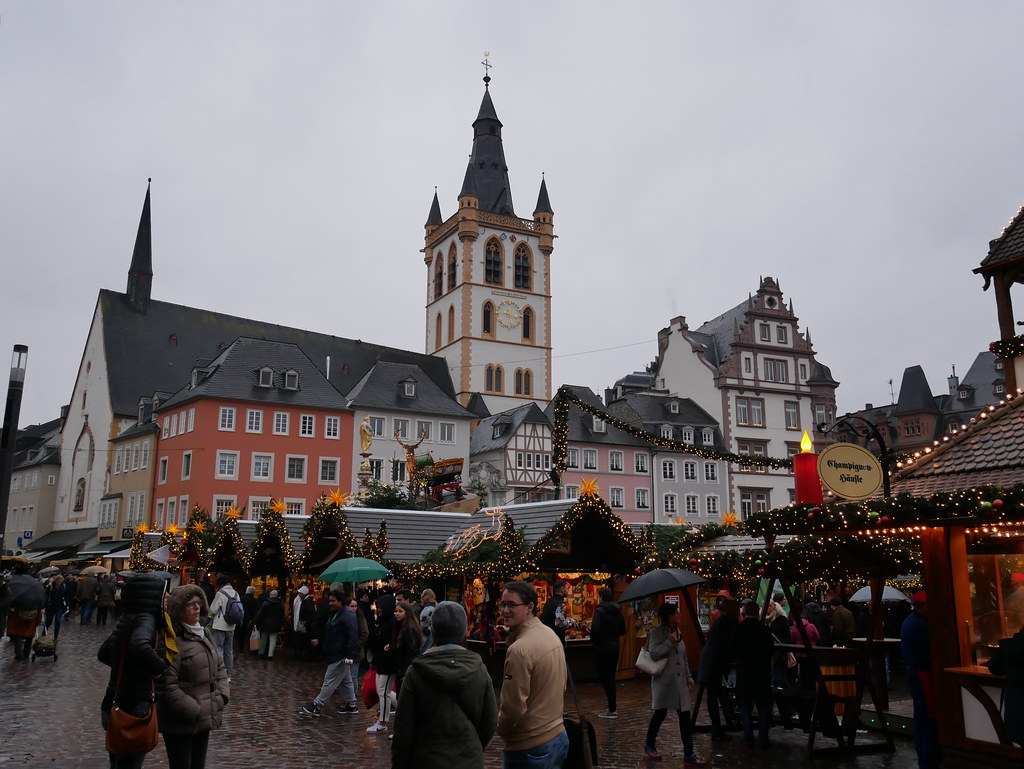 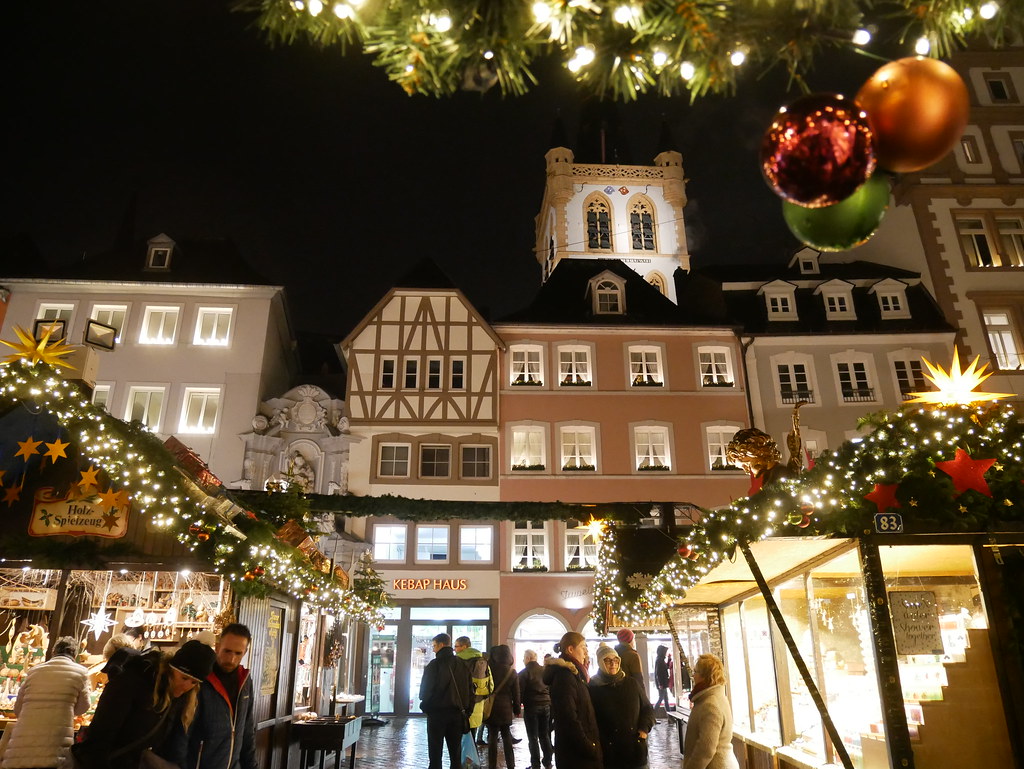 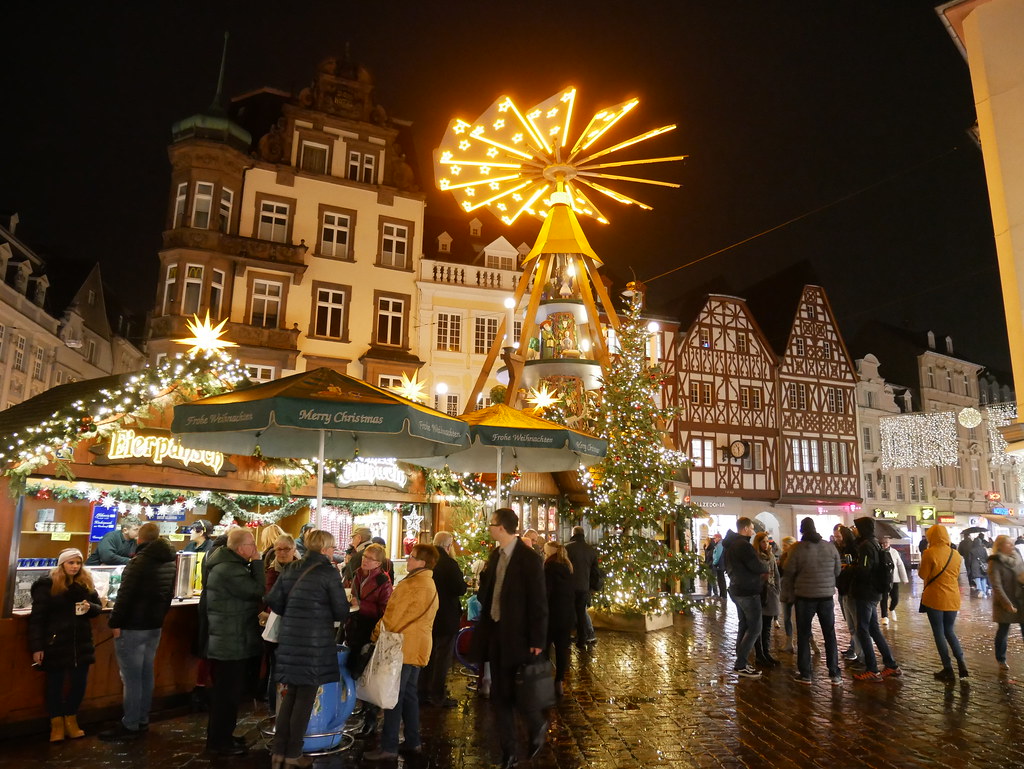 There was a second area of the market in front of the grand cathedral. It was lovely wandering around and nibbling on rosti with apple sauce and big portions of churros, but after one lap of all the market stalls we felt like we were ready to leave. There were no seats and no music either so it really lacked any atmosphere and was a bit anticlimactic. 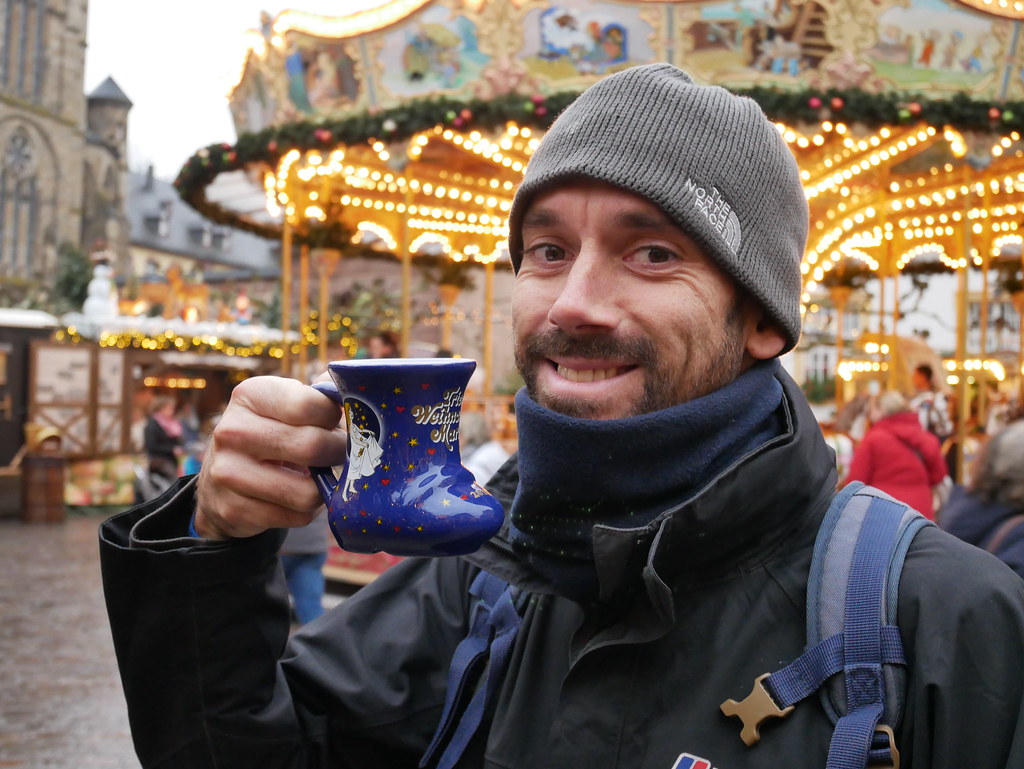 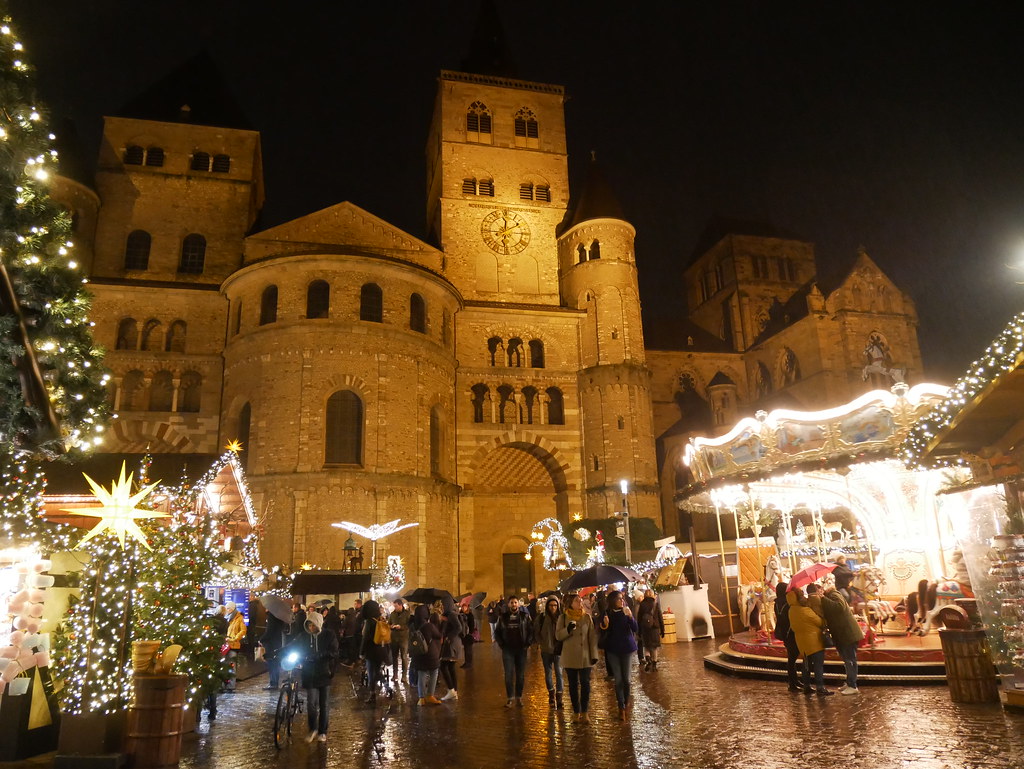 The following day we left Germany and crossed the border into Luxembourg to see the Christmas market there for a little comparison. The capitol looked quite different to Germany and all of the houses were painted a various shade of beige. A river wound it’s way below the city and large areas of forest weren’t far away, but it didn’t have enough character or colour for me. We were instantly impressed by the Christmas market though as they were actually playing Christmas songs and it gave the area a lovely festive feel. We arrived at around lunch time and there seemed to be lots of office workers enjoying a drink or two. The stalls all sold the same tat as in Germany which was a shame. The Christmas market was spread across three areas of the city centre and one had an ice rink and bar. We managed to use our German boot-mug for mulled wine and take a well needed seat beside a fire pit. When we returned to the original market the music had turned into modern crap and the Christmas spirit vanished in a flash. We’ve now seen Christmas markets in three different countries (we visited one in Nancy, France a few years back) and I can safely say they are totally overrated. I would prefer an evening spent at home (if I had one), sat beside a roaring fire, sipping mulled wine and eating mince pies rather than walking around shops selling mass produced gifts. Now it’s time for a brief visit home before we return to beautiful Norway for another winter season. 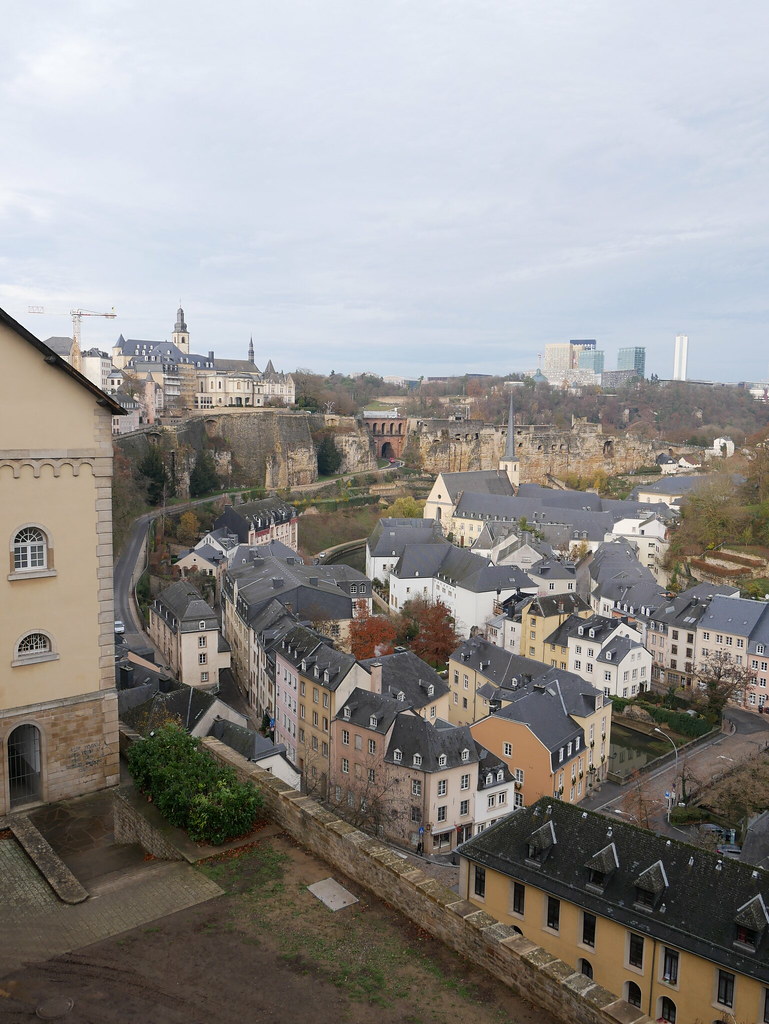 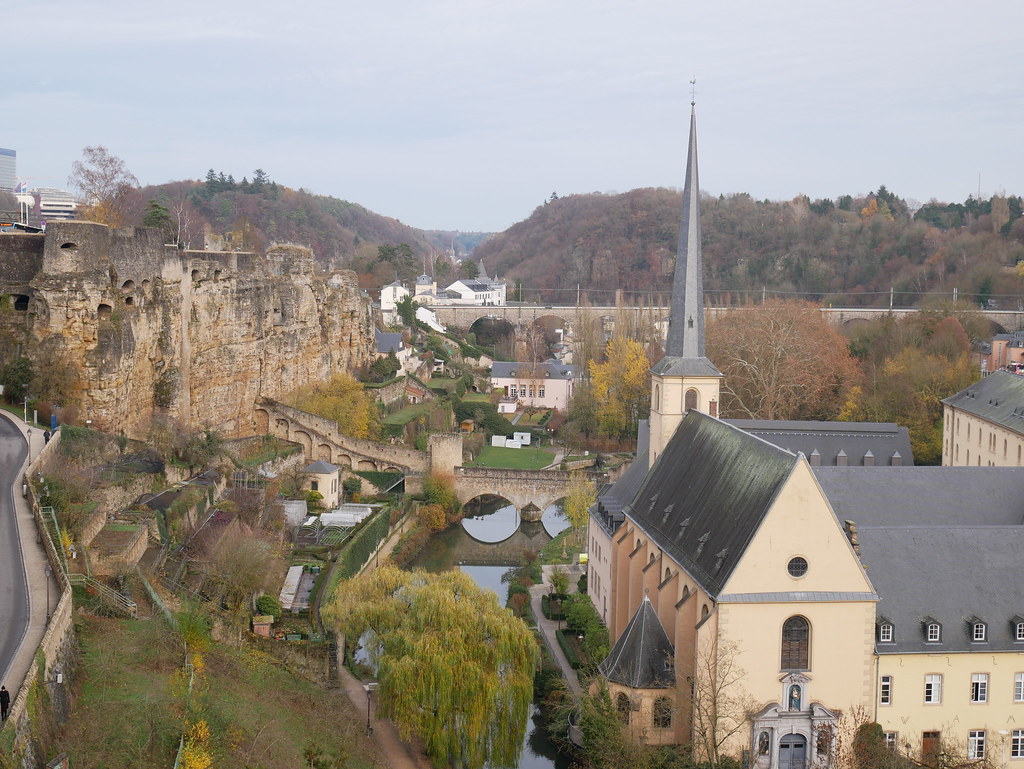 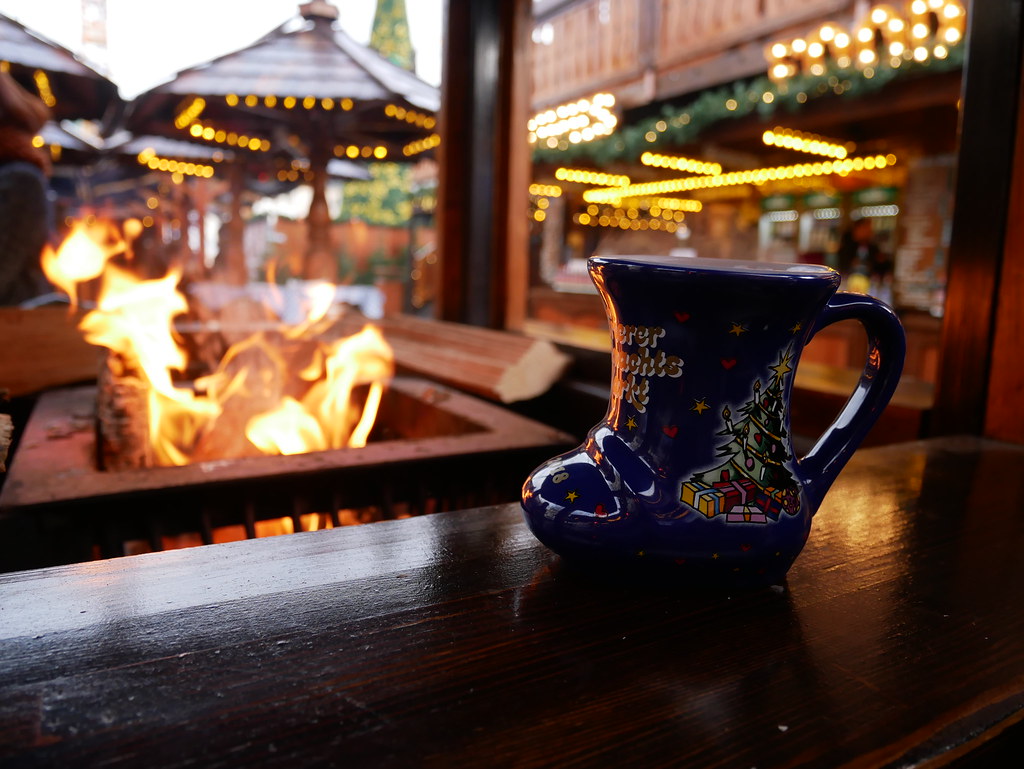 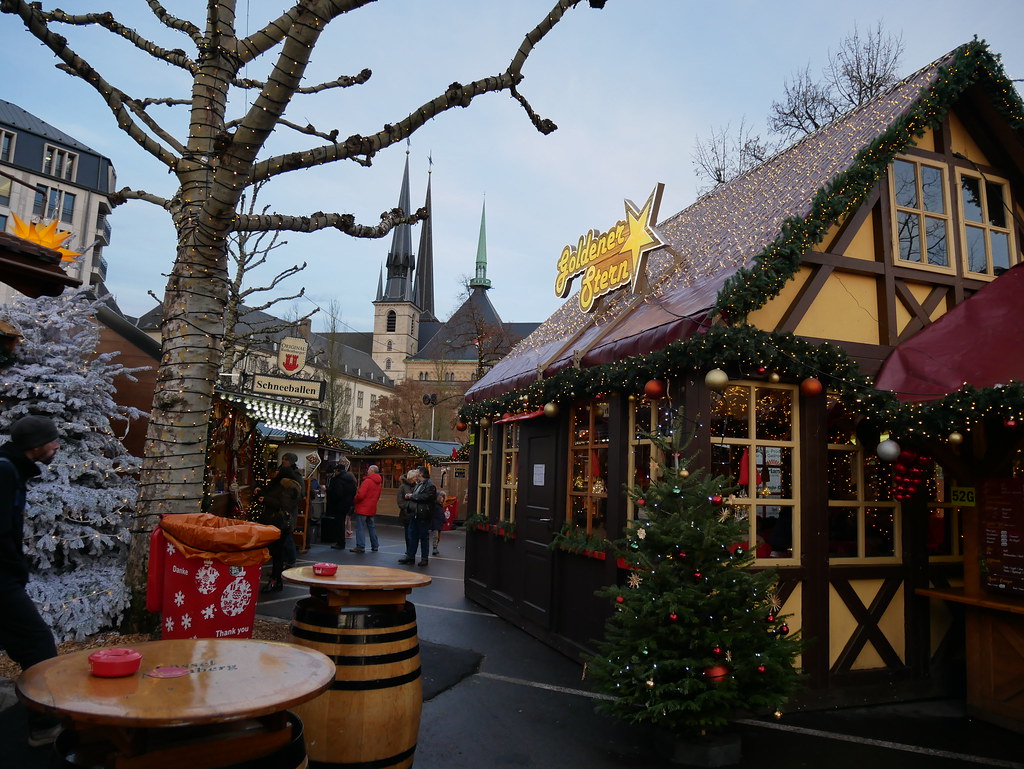