I found Feridhoo Island by chance, it’s one of the more recent local islands to open its doors to tourists and from what I read it had a desert-island vibe thanks to hardly any other tourists, an incredible beach and some of the best house reef to snorkel. Some people had also stayed on expensive resorts yet they preferred this island, plus most people mentioned seeing many reef sharks and eagle rays while snorkelling the reef so it sounded like the ideal place for us.

It took awhile to reach however as we opted for the extremely cheap public ferry from Thoddoo. First we had to catch one to Rasdhoo Island, it took about two hours and cost just $1.50 per person. The large boat had only 6 other people onboard, I can’t imagine it making any profit but we greatly appreciated the service. Once on Rasdhoo we had about four hours to wait until the next ferry to Feridhoo so we walked with our backpacks across the tiny island to the bikini beach. We figured having four hours was a good thing as it gave us a chance to see another island and snorkel while we waited but the weather said otherwise. It was our first bad-weather day we’d had in the Maldives and to be fair we were very lucky having 9 days of blue skies during rainy season. But this day was windy and chilly so we didn’t even sunbath and instead plonked our bags on the empty beach and read our books. A few raindrops fell and I said we should probably move, but Craig wanted to wait until it was definitely raining so once it was absolutely bucketing it down we ran like mad with our backpacks up the road and under the shelter of a small stadium. 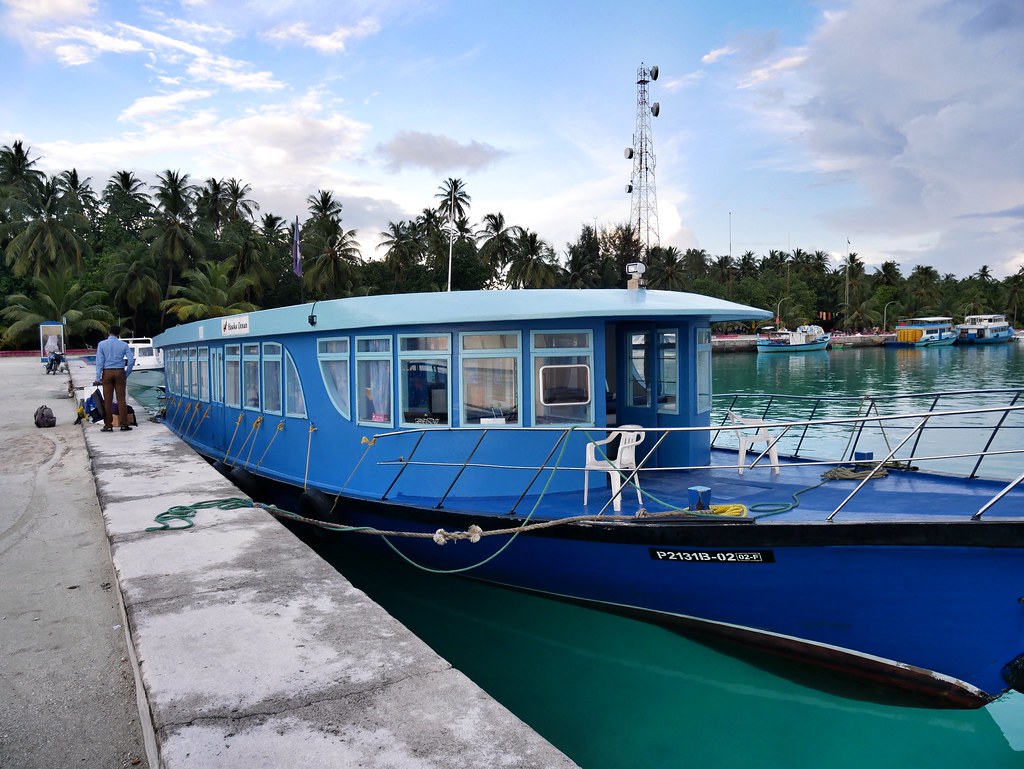 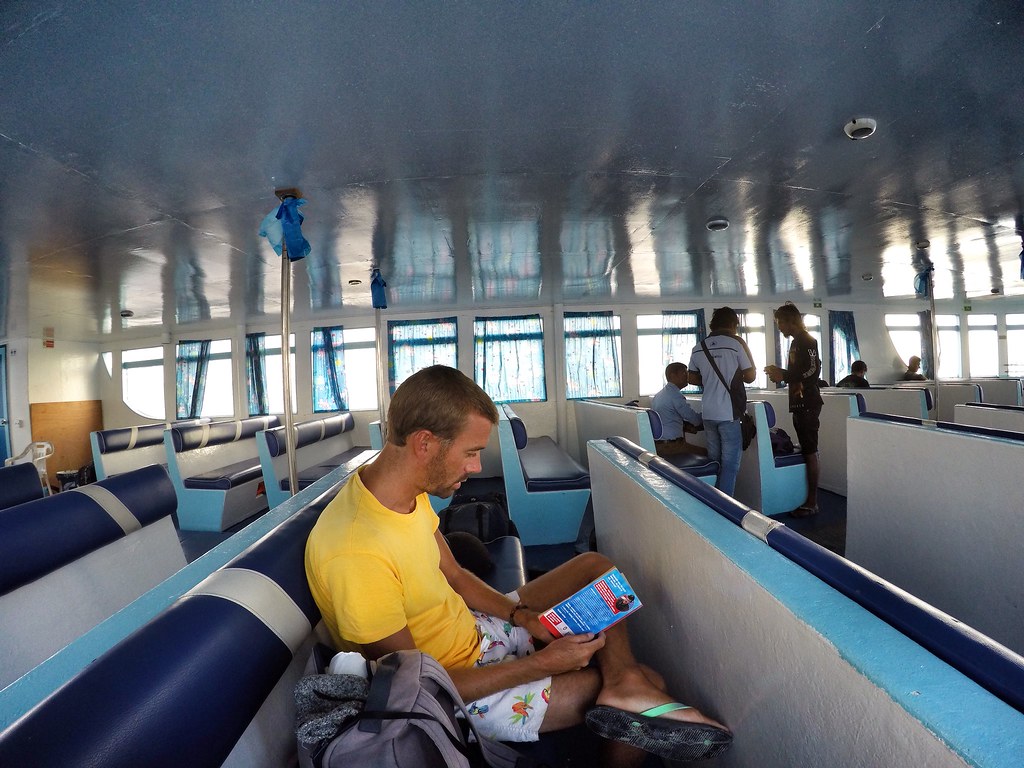 When the rain eased we headed back to the beach and ate a loaf of bread and a papaya that we’d bought from a little store for a cheap lunch. We had two cats harassing us for food and then a bizarre mass of hermits came out the bushes and onto the beach. They were everywhere but one in particular caught my eye, it had found a plastic lid and used it as a very nifty transparent shell! Apparently if a new hermit shell becomes available the hermits will queue up in size order and each one will upgrade its shell to the next one in line. 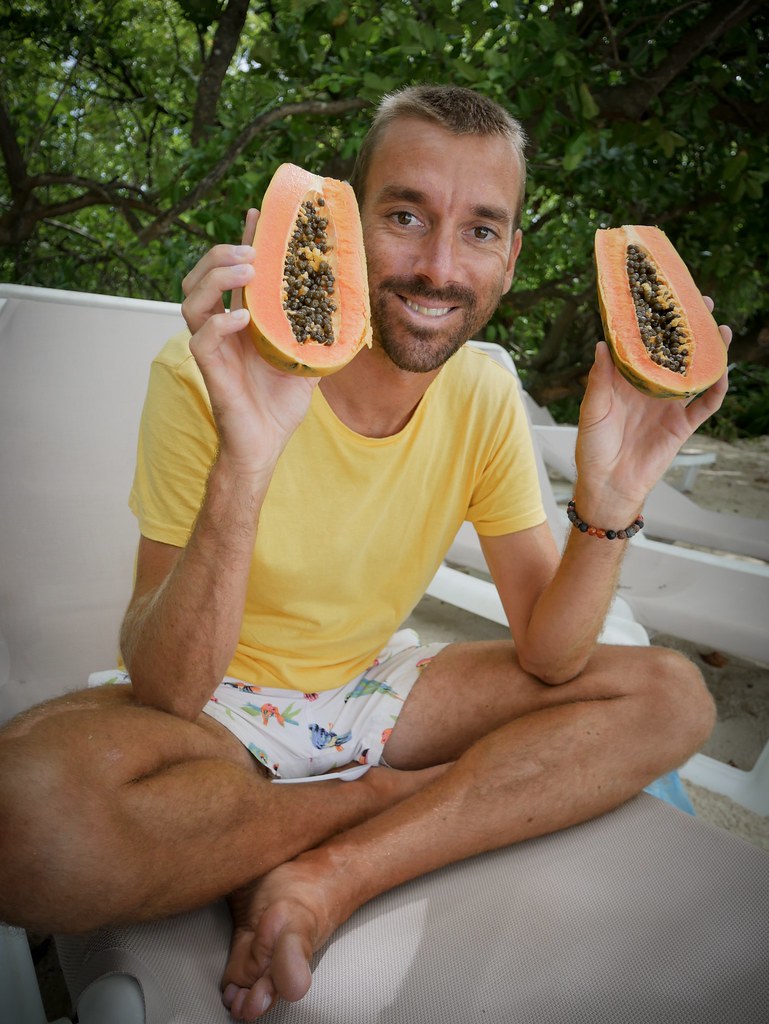 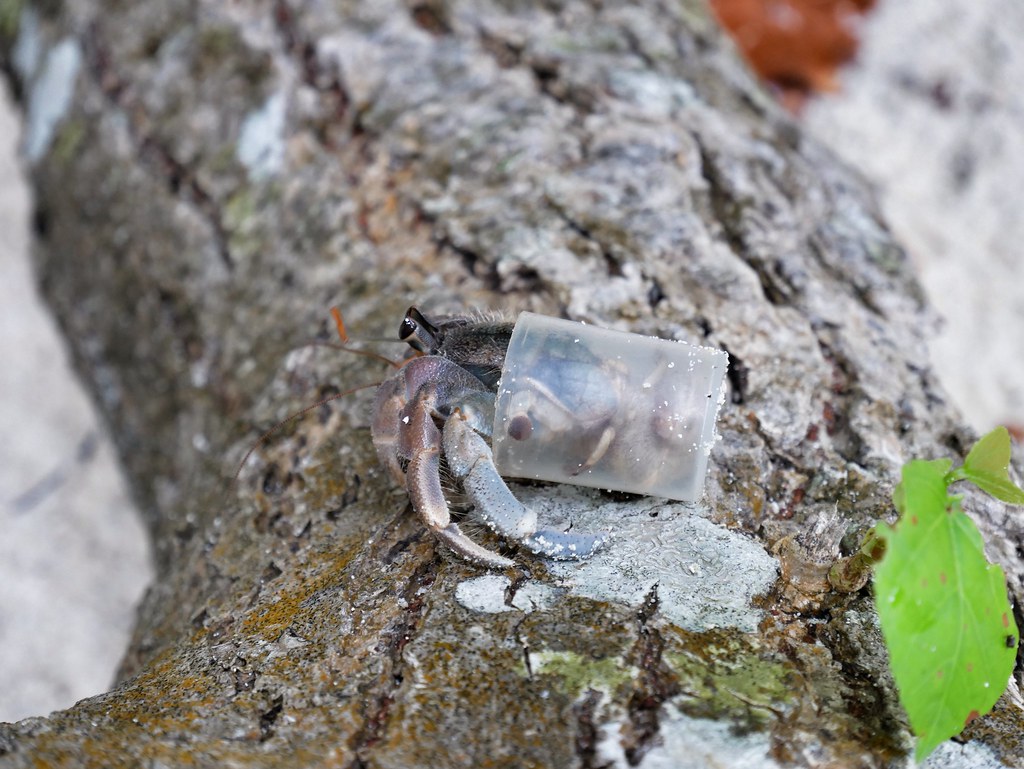 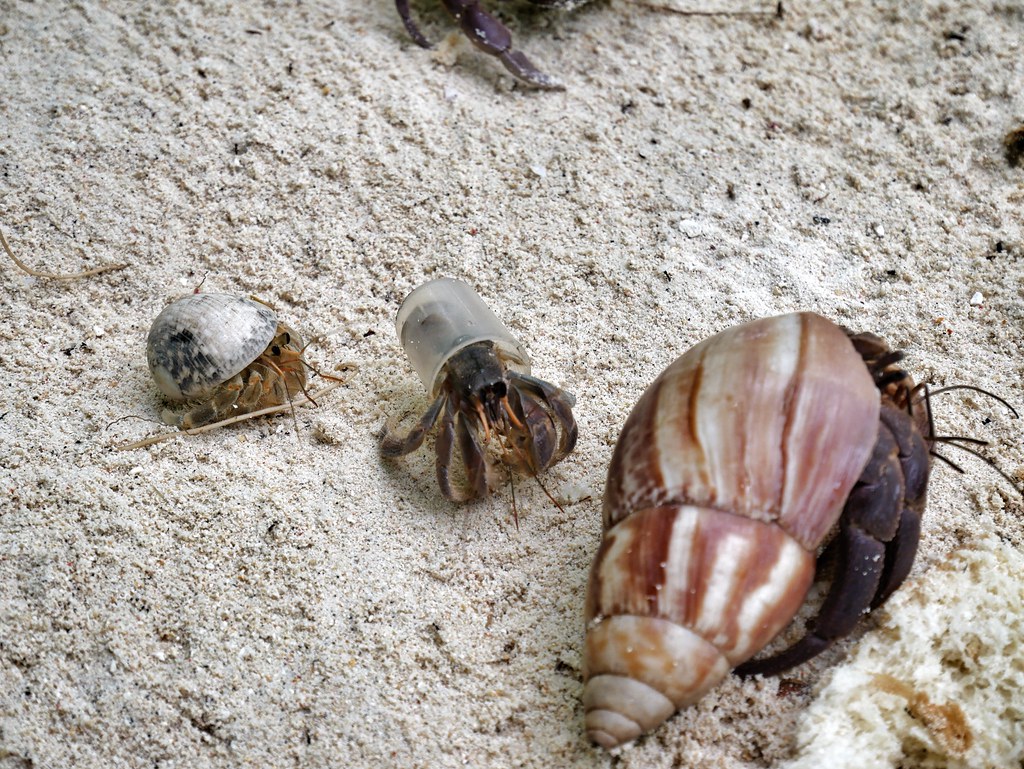 The next ferry to Feridhoo was just as quiet so we laid down for the three hour journey and caught up on sleep until the sea became too rough and we were sliding up and down the bench from the horrible sideways motion. The journey cost $1.50 again, an absolute bargain! Our new host met us at the jetty and put our bags on a sort of tuk tuk, we however got a walking tour to the guesthouse where our bags and a couple of coconuts were awaiting us. It was another sleepy island, with freshly swept sandy streets and colourful houses, although there also seemed to be quite a few abandoned buildings. 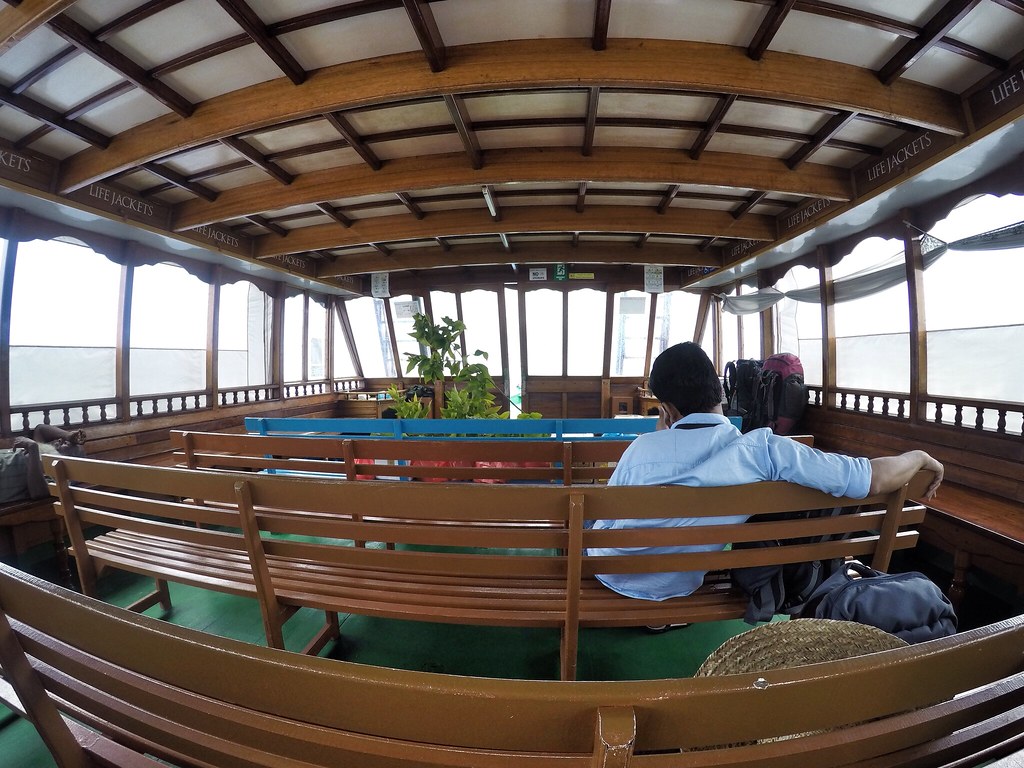 Our guesthouse was very fancy and we were the only guests there, in fact we were told that there were only four other tourists on the entire island. Just behind our property was a dirt track leading to the sea where the islands best snorkelling was. Then we were taken on a walk to the bikini beach, past a group of youngsters playing volleyball, and it was nice to see boys and girls playing together, although of course we couldn’t help but feel it was unfair that the guys were wearing board shorts and t-shirts while the girls were fully covered and wearing a hijab. We expected both sexes to be fully covered as the Maldives is under sharia law and has stricter rules but it seemed more relaxed in that sense. The beach was beautiful with a big curve of white sand, hardly a soul around and it even looked good in cloudy weather with slightly choppy sea, so we could already see the potential and were excited to check it out the following day. 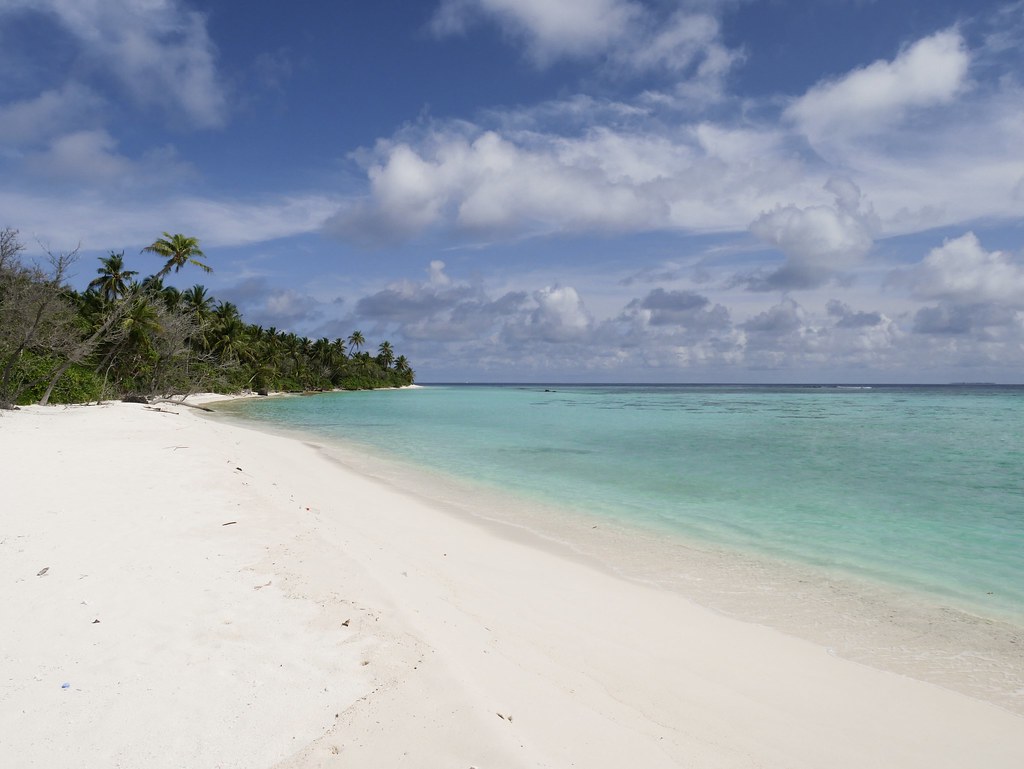 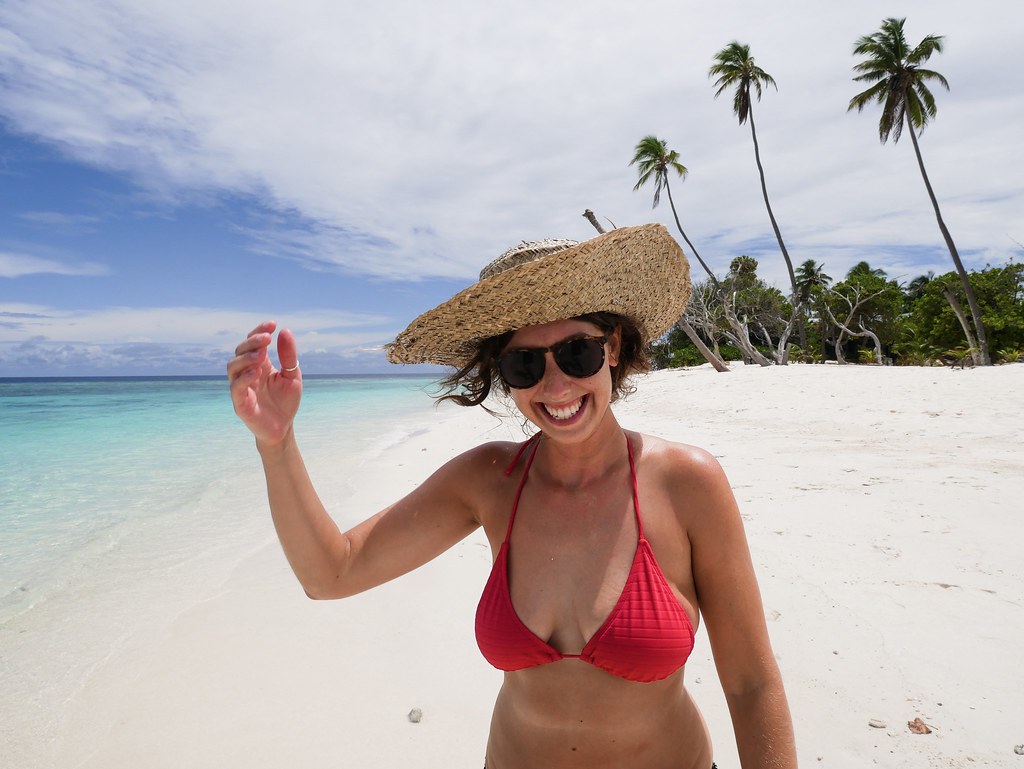 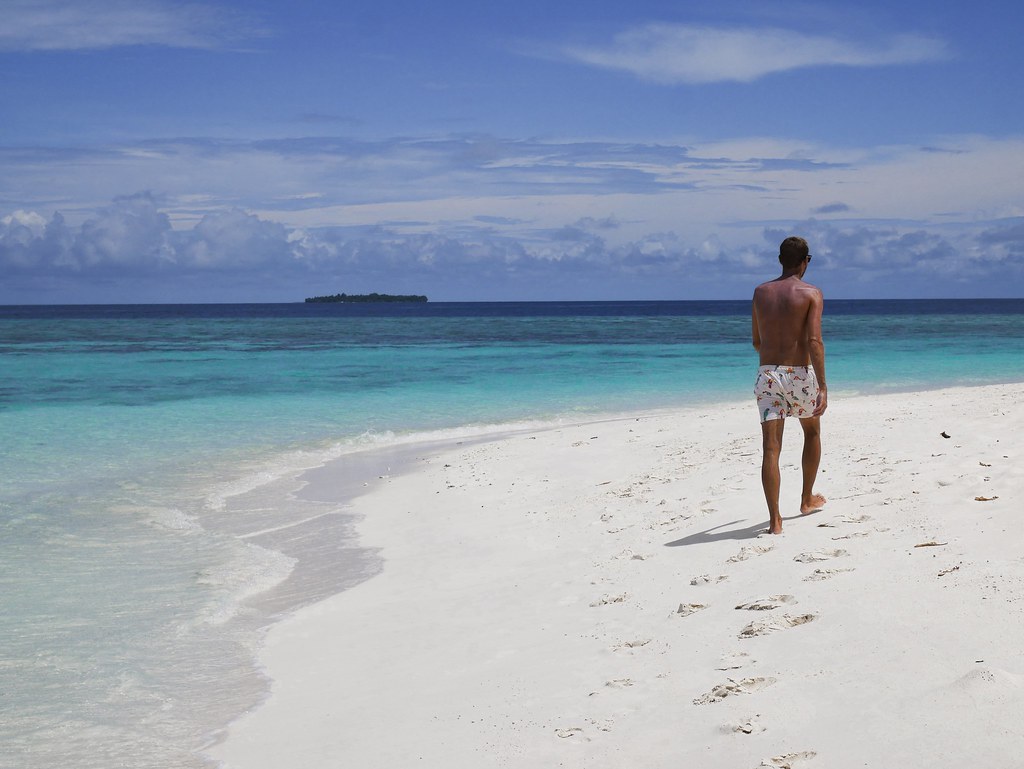 We decided to go snorkelling first thing, there was a bit of rubbish along the shore and in the bushes but it was a local island and not cared for like a resort, sadly. The visibility was awful when we went underwater in the shallows but the further we went out the better it became. Craig quickly spotted two eagle rays effortlessly gliding past us and there were a few patches of soft coral home to nemos. I saw something swimming our way from the deep, it took me a second to realise it was a shark, a wave of panic washed over me and then I got excited because it was a harmless reef shark. We ended up seeing a few of them and they were big too, a meter or more long. So we were very happy we came to this island, the rumour was true about the great snorkelling, albeit the reef was no healthier than on previous islands and there seemed to be less fish, we were at least seeing big marine life for a change. 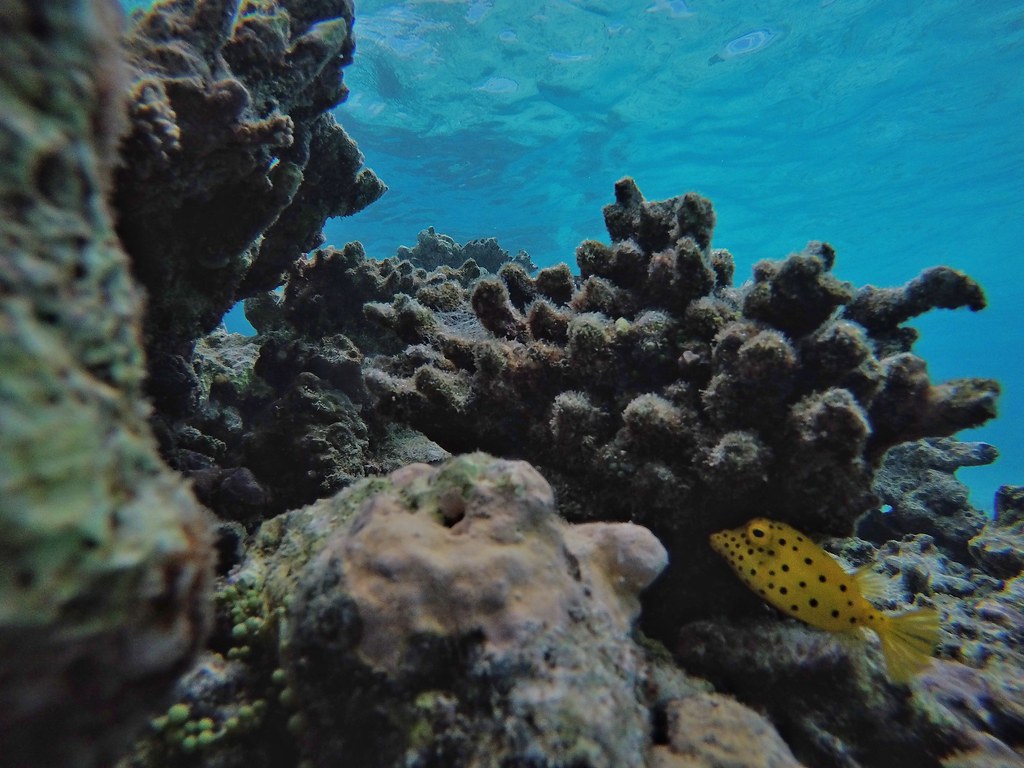 We headed down to the beach and luckily the sea was much calmer than the day before. There were just bushes and shrubbery behind the beach so the locals made about 10 sort of shade marquees out of natural materials with wooden poles and hand woven palm throngs on the roof. There were 20 sun beds and all were empty when we arrived, in fact there was never more than 6 people on the beach. The reef was a dead mess on this side of the island but stingrays liked swimming along the sandy floor and burying themselves in the sand, waiting to ambush prey, so we snorkelled with them until a heavy rainstorm came. 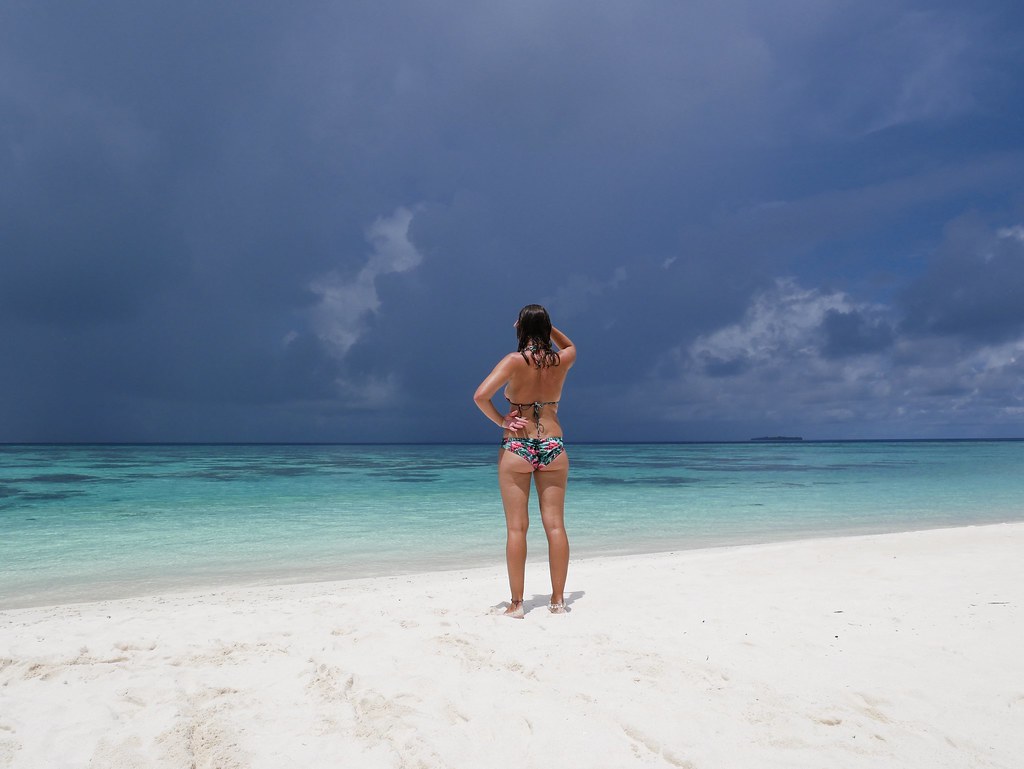 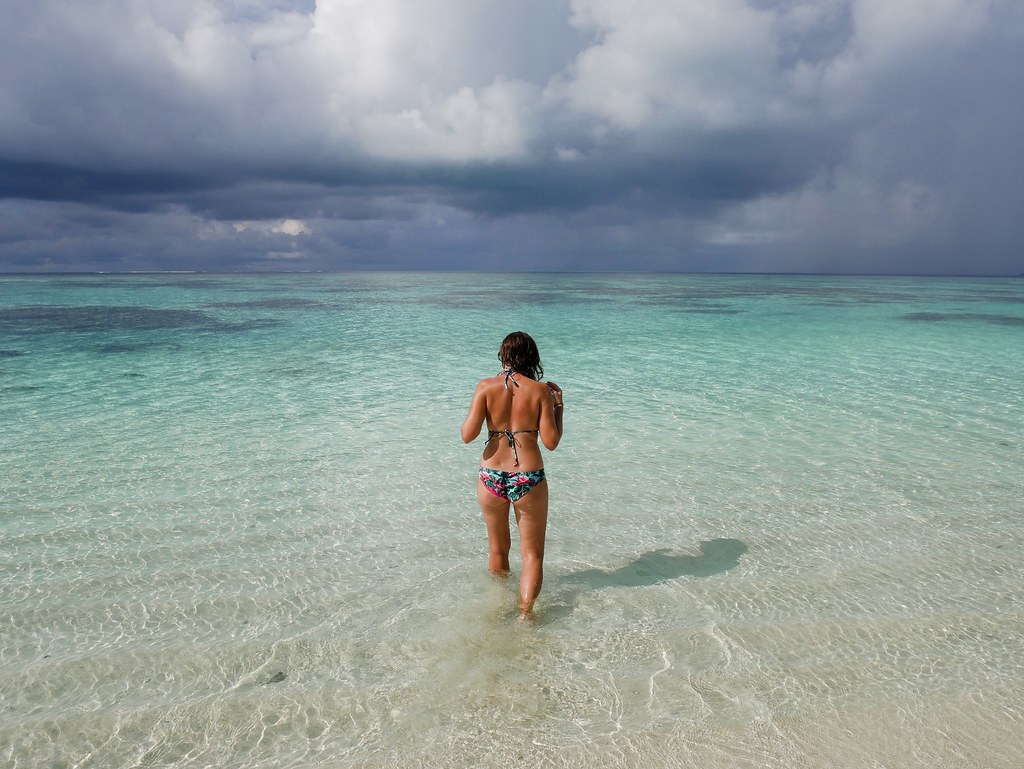 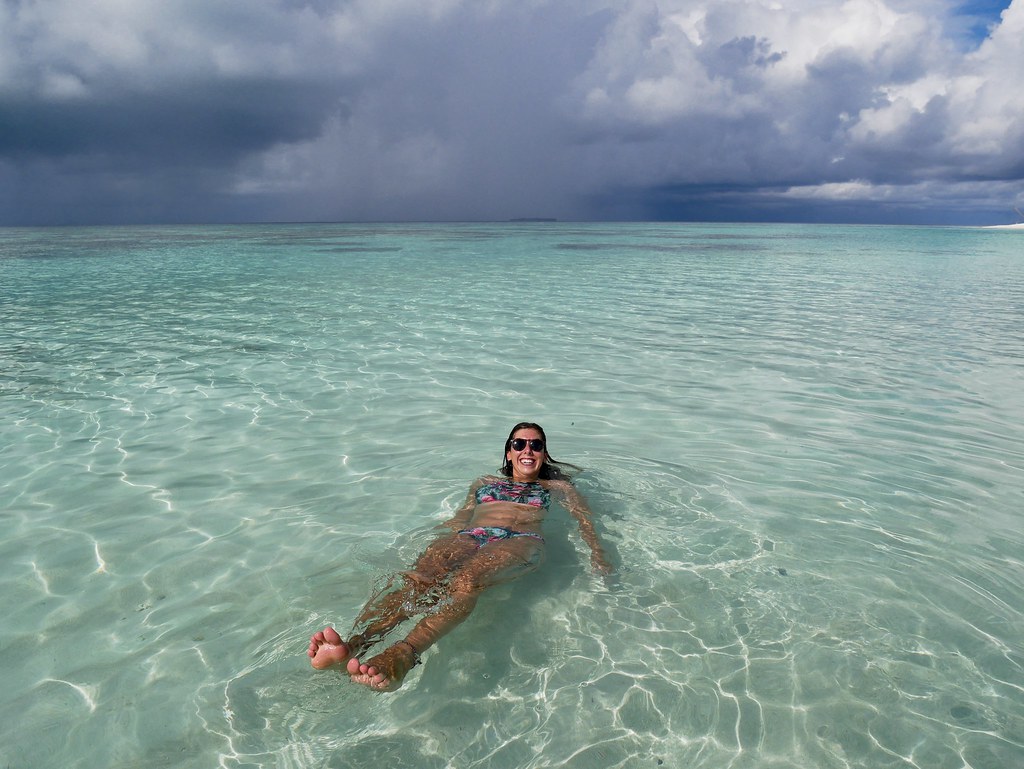 That was the theme for our stay on Feridhoo, sunny mornings and tropical storms in the afternoons. On one particular day we watched multiple storms forming on the horizon. We could see the exact areas where rain was falling out of the black clouds and slowly, it came our way. But it did take it’s time and the sun beamed on the tropical waters and glared on the white sand while the black wall creeped upon us for almost four hours. We didn’t have long to move once the rain began to fall, and it absolutely poured for over 10 hours. 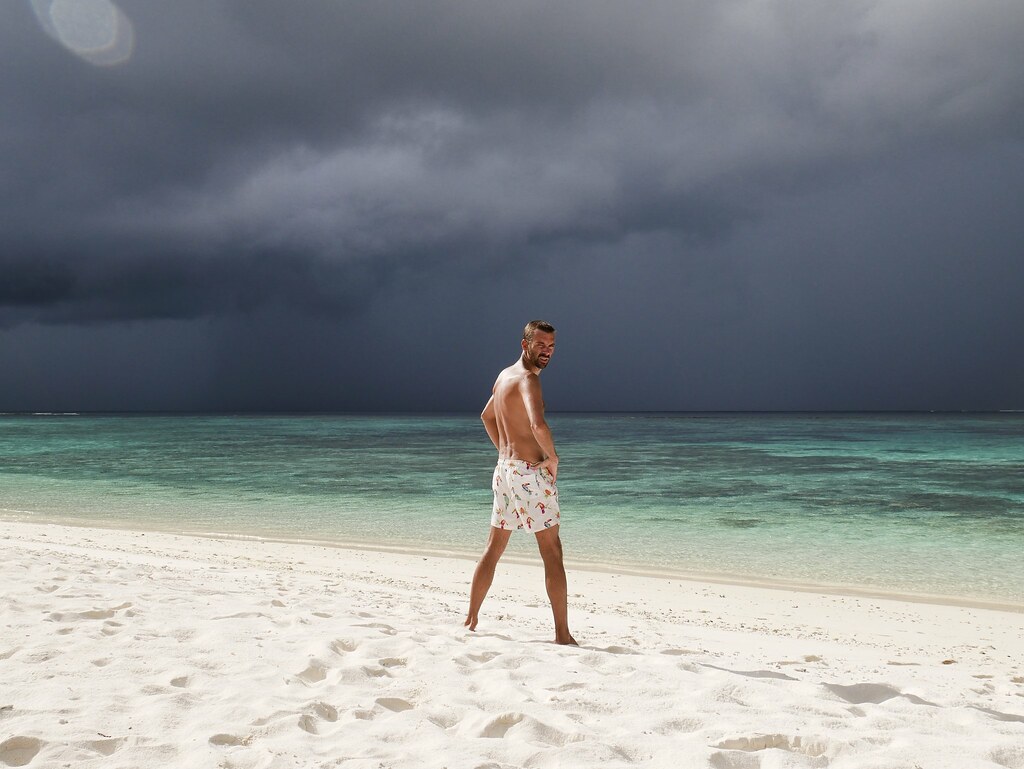 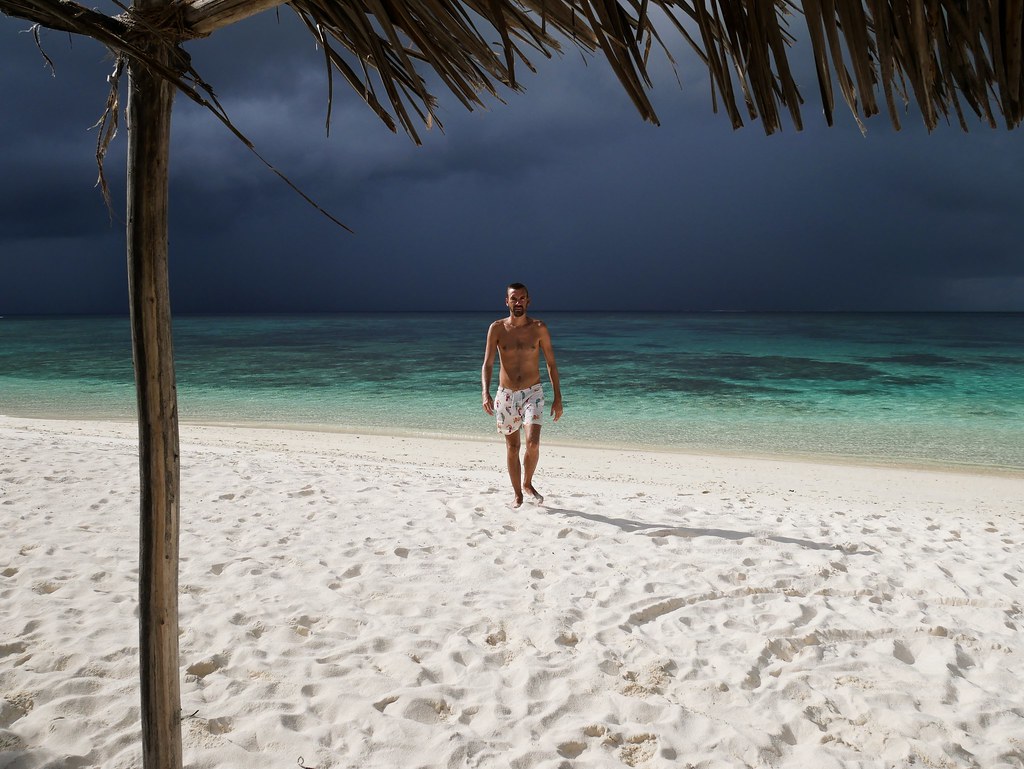 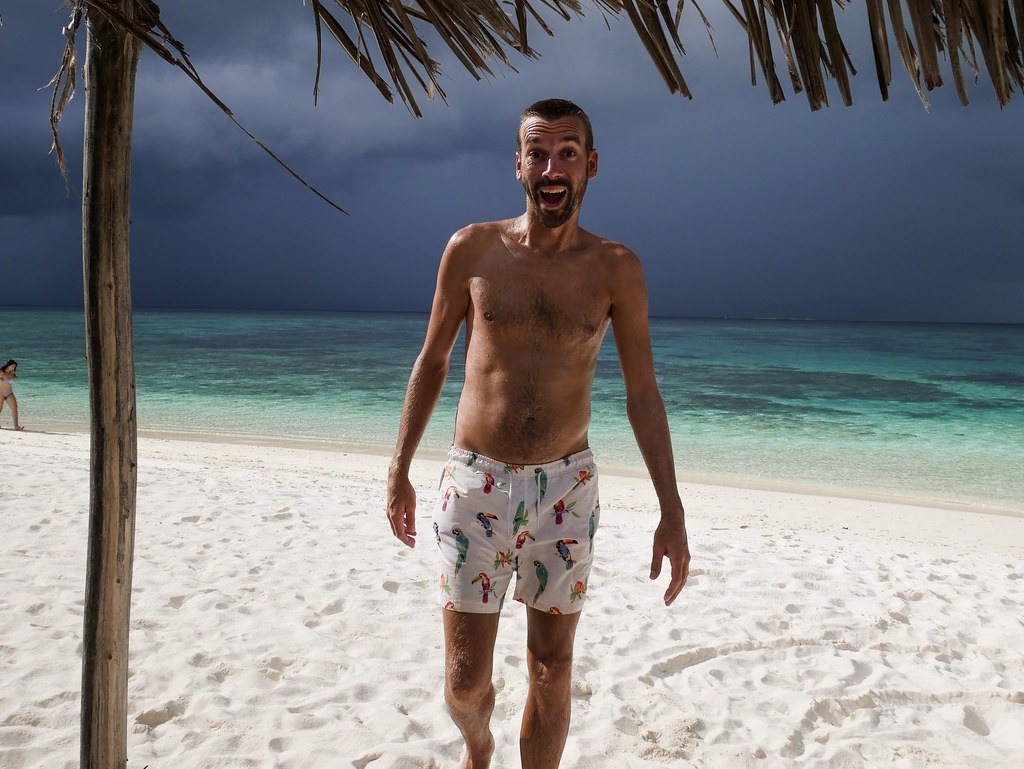 I guess your wondering if that was the ‘bad or ugly’ part from my title, but no, we actually enjoyed the storms and unique photo opportunities that came with it. The bad part of the island was actually the snorkelling. The first day was great as I mentioned above, but the following day we were left very disappointed. We snorkelled parallel to the shore, and we actually weren’t having any luck sighting sharks so we gave up and headed back to shore. There were numerous small openings through the shrubby coastline but we couldn’t work out where we’d left our towels. Craig said it was to the left but when we arrived at the shore we realised what he saw on the ground wasn’t our towels but rubbish, plastic oil tubs and bags. So we continued along in the shallows and a mini rock-wall dropped down a foot or so and the area was full of rubbish. There were nappies everywhere, water bottles, plastic bags, tinned food, you name it, it was there. It was in a big pile, like a mini rubbish dump in the sea that didn’t move because of the ledge kept it there and I have no doubt in my mind that some locals on Feridhoo Island regularly dump their rubbish directly in the sea. We were really pissed off, how could people care so little about the environment, about their own backyard, about what their main food source (fish) are eating. I guess they hoped the sea would wash it away to another island but the ledge trapped it all there. 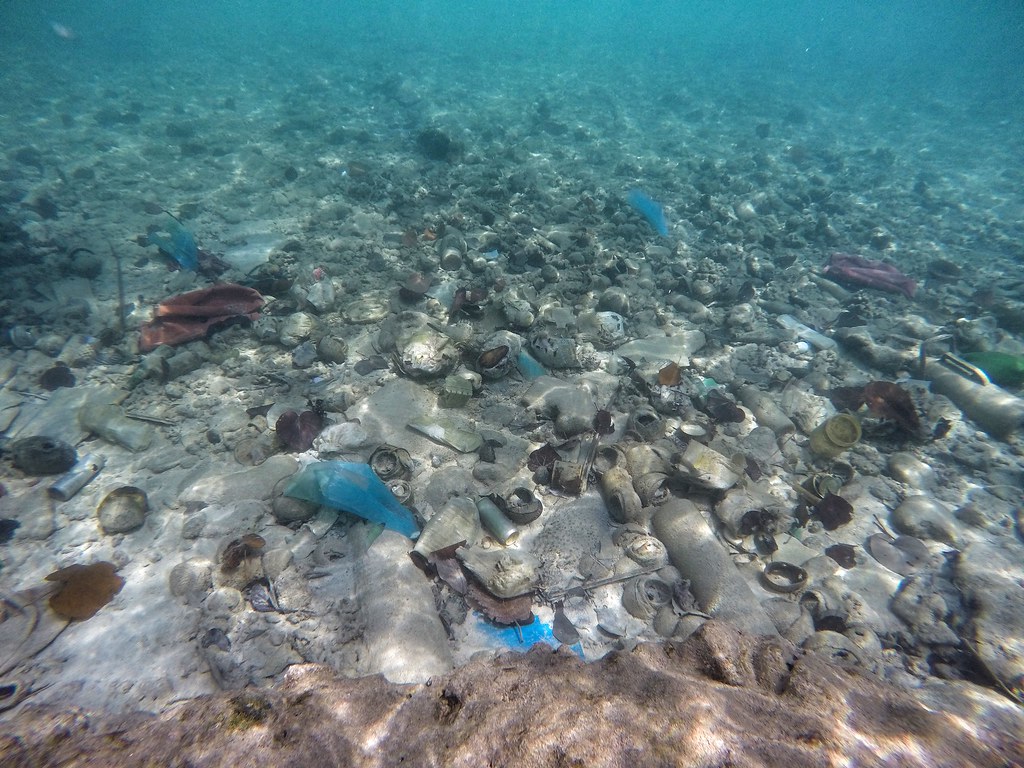 Every guesthouse charges an environmental fee and the minimum is $3.50 per person per night, it goes up the more expensive the place you stay. So between the two of us we payed $120 during our 17 days in the Maldives on environmental fees and I would love to know where the heck that money goes, maybe it should be put towards environmental education on these local islands as they seem oblivious about the destruction they are causing to the sea and especially the marine life. We went back to our guesthouse and our host was chilling on his phone, he’d already mentioned in a previous conversation that the locals were lazy people and they don’t like to work hard. We explained that the snorkelling wasn’t so good and there was lots of rubbish in the sea and he nonchalantly continued browsing the internet on his phone. I’m sure he isn’t littering the island if he needs tourists for his livelihood but there’s a few families on the island who are destroying the place and he’s sitting back and letting it happen. We still wanted to see manta rays but our host clearly didn’t want to put himself out and arrange the trip so we decided to leave Feridhoo a couple of days early and try to see them on our final Maldivian island. We went for one last snorkel on Feridhoo, staying well away from the rubbish pit but the current must’ve changed with the storms and with it came thousands of jellyfish. I was trying to mumble through my snorkel and tell Craig that there were jellyfish everywhere, they were clear so you really had to focus your eyes into macro mode to see them and suddenly they’d all appear. Craig didn’t seem bothered so we continued snorkelling….and then a gigantic sanitary towel floated past us. I felt like Karl Pilkington when he gives his damn right honest opinions of places, like at the pyramids of Egypt when wind caused nappies to fly through the air. Surprisingly this isn’t what they showed me on the brochures for the Maldives. We swam back to the shore and questioned if we were pussies for being scared of jellyfish and a rank sanitary towel (I think not) but it was our last day so we went back out and then Craig mumbled something and did a u-turn back to the shore. I followed him and made some awkward noises to suggest I didn’t hear him and in return he loudly said “GHERE EWEYWGERE” he was referring to the jellyfish, his eyes had finally focused on them and I cracked up laughing. I couldn’t help it and suddenly I swallowed a mouthful of nappy and sanitary towel water. I tried sticking my fingers down my throat when we got out the water but it didn’t work and I felt sorry for the fish, sharks, turtles etc that swallow that water to live. What gives them life is surely also going to kill them and the Maldives needs a serious wake up call. With all that said, I do think Feridhoo still has the potential to be a top local island to visit with one of the prettiest yet quietest beaches. 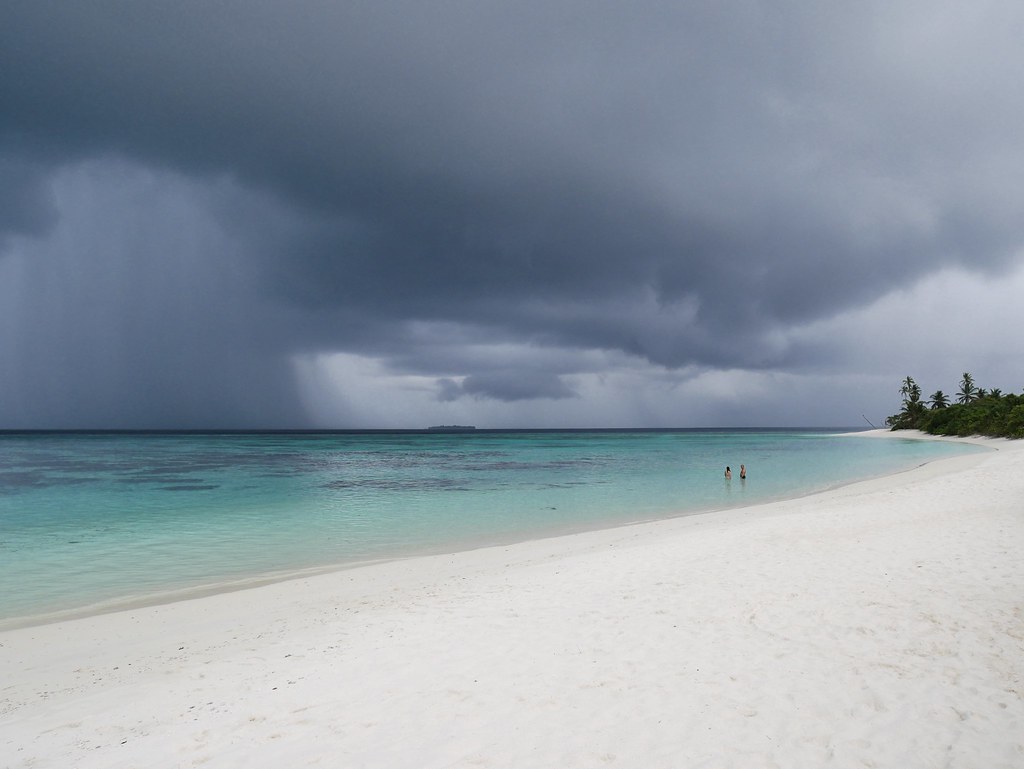 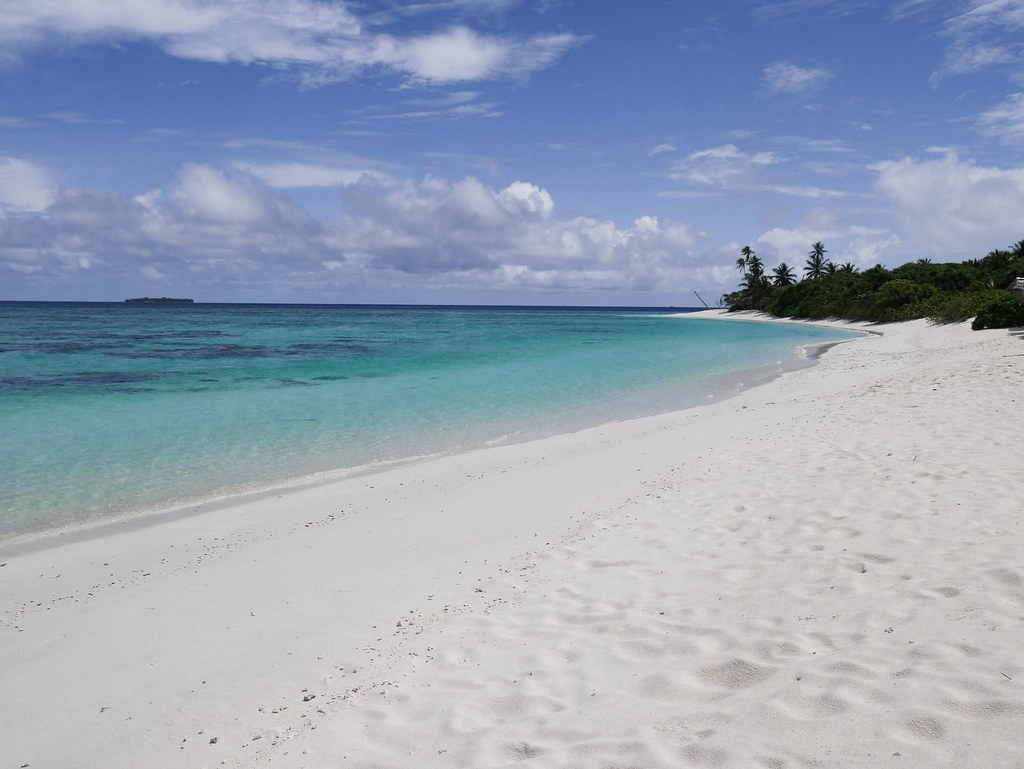