Thoddoo Island is a bit of a black sheep sitting alone in the Indian Ocean just north of the cluster of islands that form the Ari Atoll. It’s encircled by a reef and best known for its large lagoon and it’s production of fruit. Even though it’s slightly removed from the Atoll, it’s still very accessible due to the fruit ‘traffic’ and there’s even a midnight local ferry delivering papayas and watermelons to Malé. 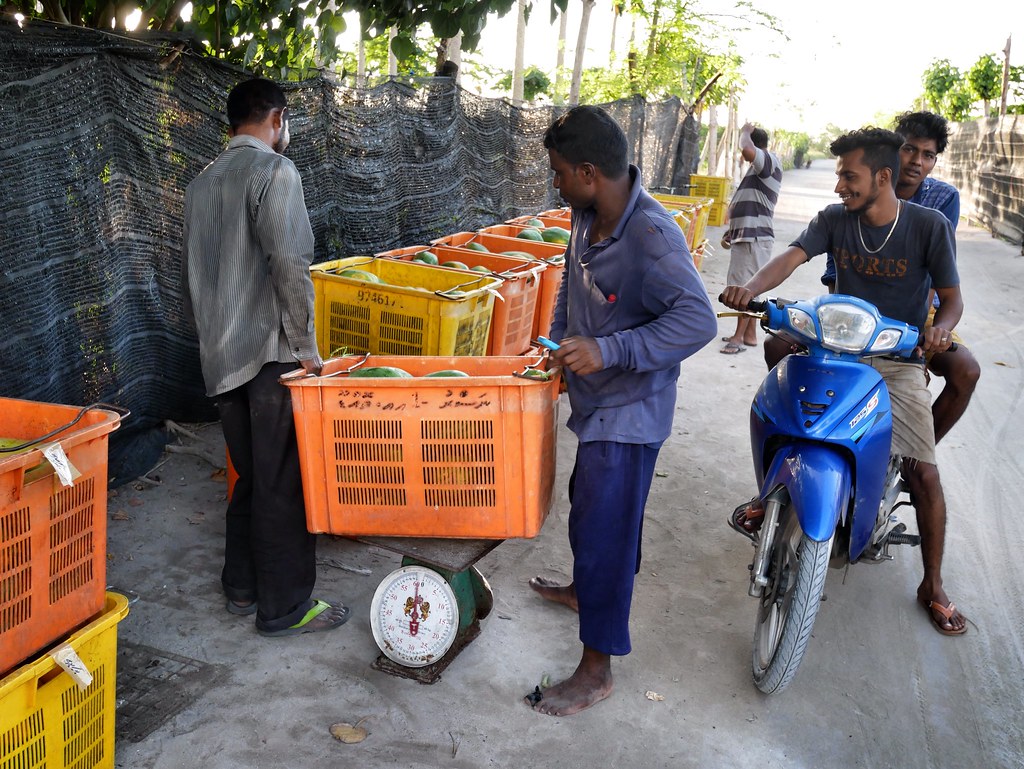 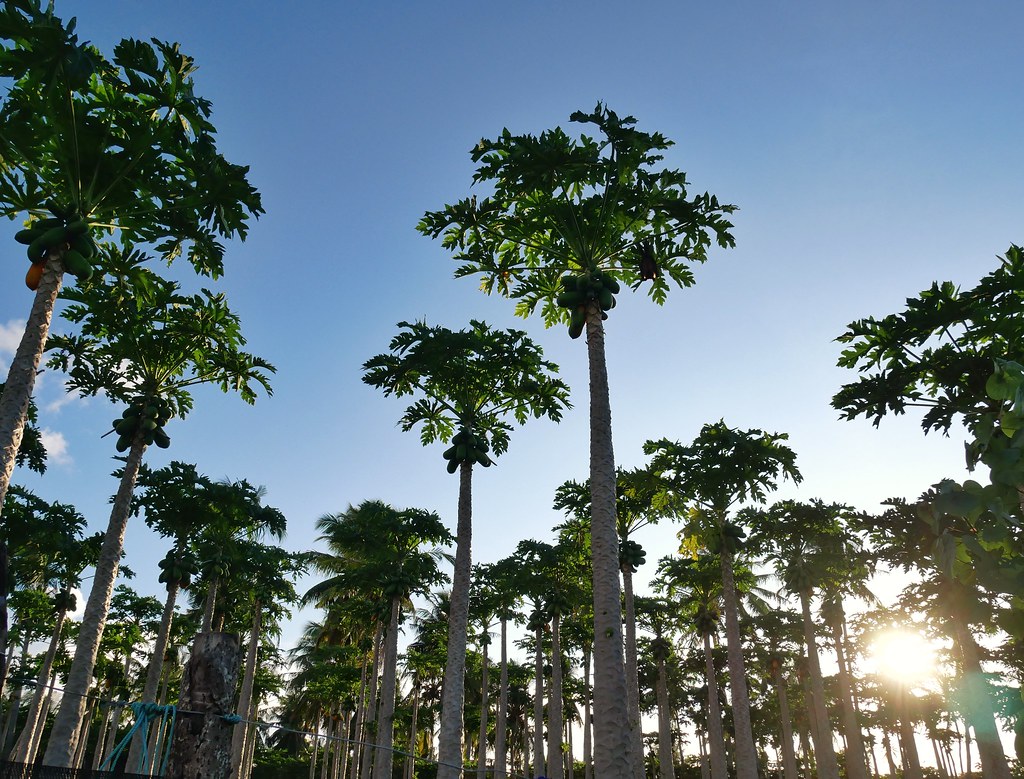 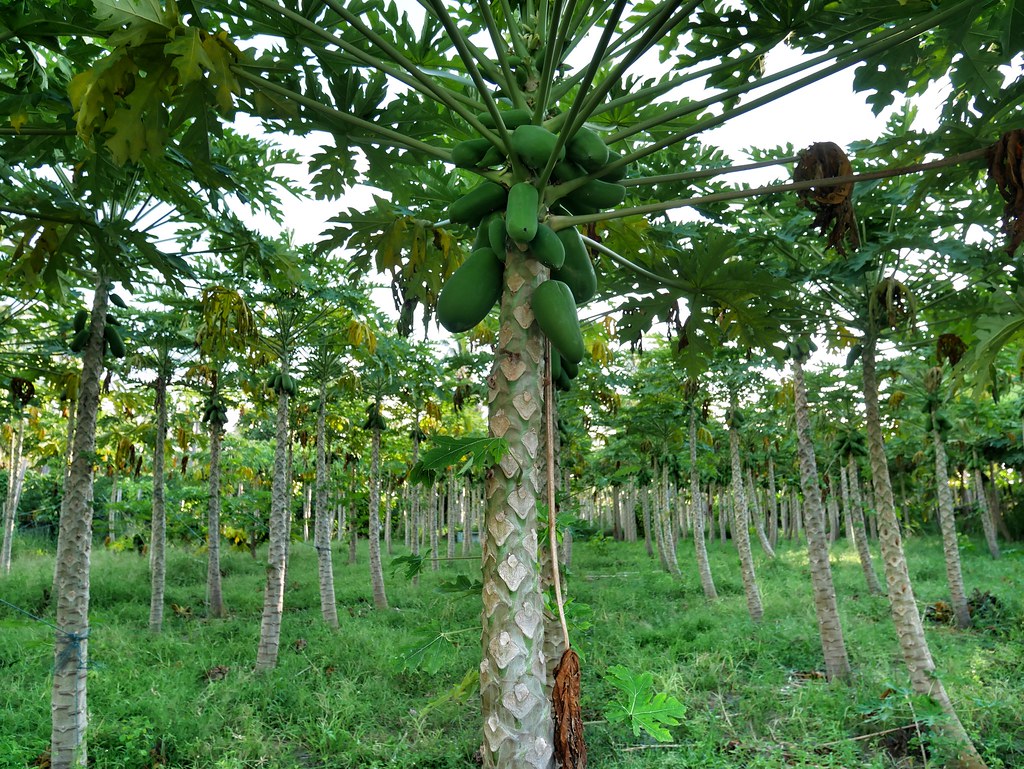 To get there from Dharavandhoo Island in the Baa Atoll, we had to catch a speed boat back to Malé and then get another one to Thoddoo. We booked a very cheap room for $35 including breakfast and the owner, who wasn’t the most charismatic chap met us at the jetty and popped us in an air conditioned taxi. It’s worth saying that there’s hardly any cars on the local islands, instead people get around on bicycles or motorbikes. Thoddoo Island is pretty big and it takes a good twenty minutes to walk to the beach so we made sure to book a place with free use of bikes. Our host said he would give us a little tour of the island to get our bearings so we both grabbed a rusty pink bike. They were in pretty poor conditions, one clanked loudly on every peddle and the other had a seat that looked like it wanted to eject me into space. Our host was looking slightly less haphazard than us and he slowly drove ahead on his mint conditioned motorbike. We felt like a couple of special kids on our midget bikes, first my hat blew off so I had to do a sketchy u-turn to chase after it and then Craig nearly fell off when he cycled across deep sand, meanwhile our host continued ahead but I know he watched our awkward shenanigans through his mirrors and he didn’t once turn around to laugh along with us. Our first stop was the ‘Guest Beach’, I don’t know if that means only certain hotels had access to it or if it was just a different name for a bikini beach. It was a beautiful but narrow beach with just one couple on it and they were hiding under the only patch of shade. So we continued onto the main bikini beach and cycled past countless papaya farms with locals picking and packing the produce. I began drooling as we went by as the Maldivian papayas are the best I’ve ever tasted – sweet, soft and juicy. 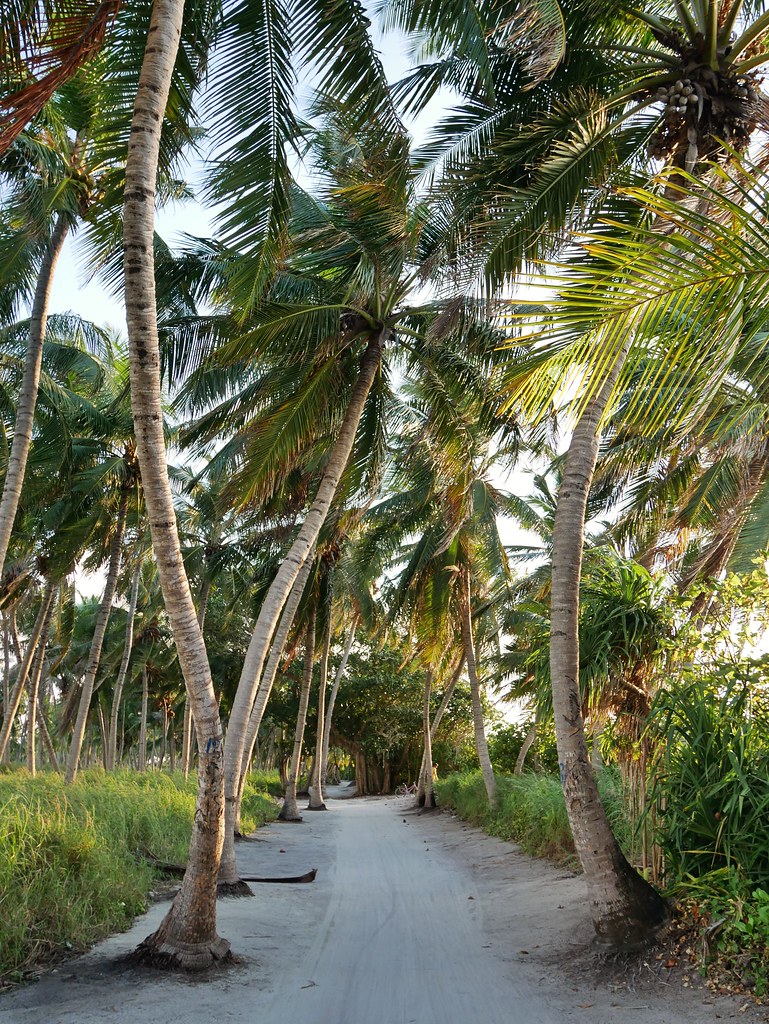 We were surprised to see about 20 other bikes pulled up by the beach, there were clearly lots more tourists here than on Dharavandhoo Island. A short path led through the jungle to an opening where hammocks and curved sun beds were places beneath the shady palms. Little openings between the bushes gave access to the sea but there wasn’t really a beach. It was odd and not what we expected, Thoddoo Island is said to have one of the best beaches on the local islands but a beach to me isn’t just the sea, it’s the whole package. The sea was undeniably beautiful though, postcard perfect and glistening in the sun. It was clear like gin and blue like the sky. The reef was way further away than we’d expected, so that’s why the lagoon appealed to people; there wasn’t broken coral on the sand and you could swim and play beach games in the sea without hurting yourself or marine life. 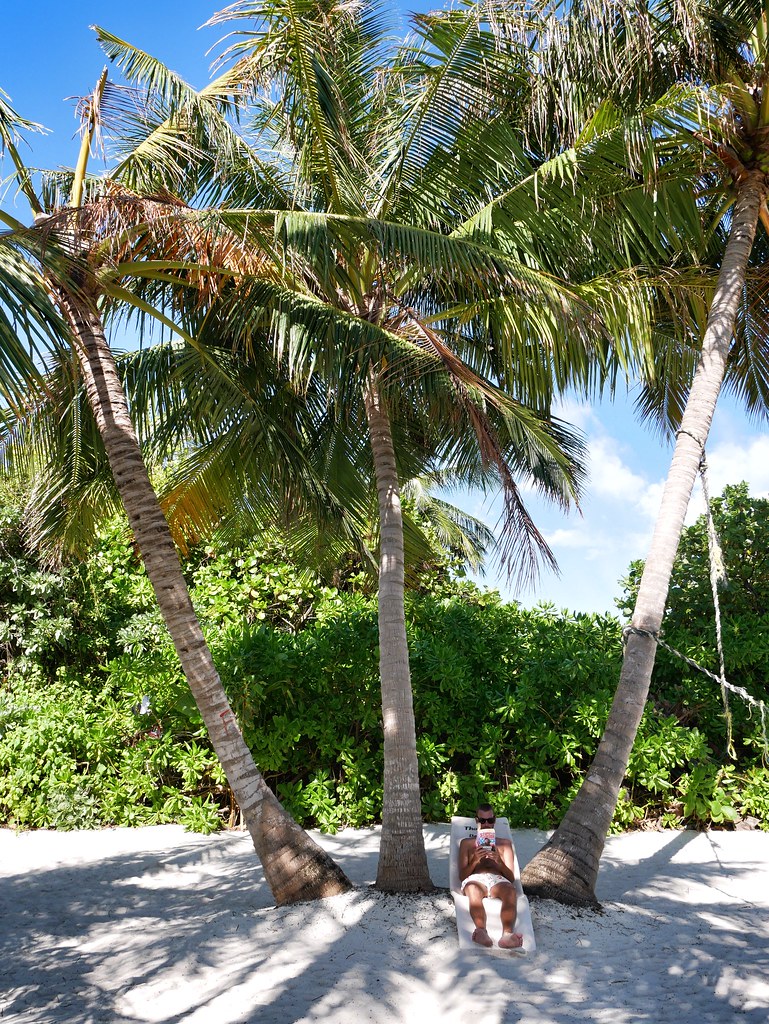 Sadly our host informed us that the current was too strong out at the reef, I guess if we got taken by a current out there we’d drift away from the only island in the area and never be found. He did however tell us about a tiny reef to the left of the beach where he said turtles hang out so that was some good news and then he headed off and left us to it. There were lots of people spread out around the groomed sandy clearing and some of them had no beach etiquette and put the heavy plastic sun-beds inside the hammocks to make them more comfortable. So that meant there weren’t so many beds available, I felt a bit like I was in one of those holiday destinations where Germans wake before the sun to claim a sun bed. We did find two beds in a cute sort of alcove in front of the sea though. It was a pretty nice place to kick back but I couldn’t help but be annoyed by the bushes and palms on either side of us, the privacy was great but I like a wide angle view and all I could see was a small patch of sea in front of me and it kind of made me feel claustrophobic. 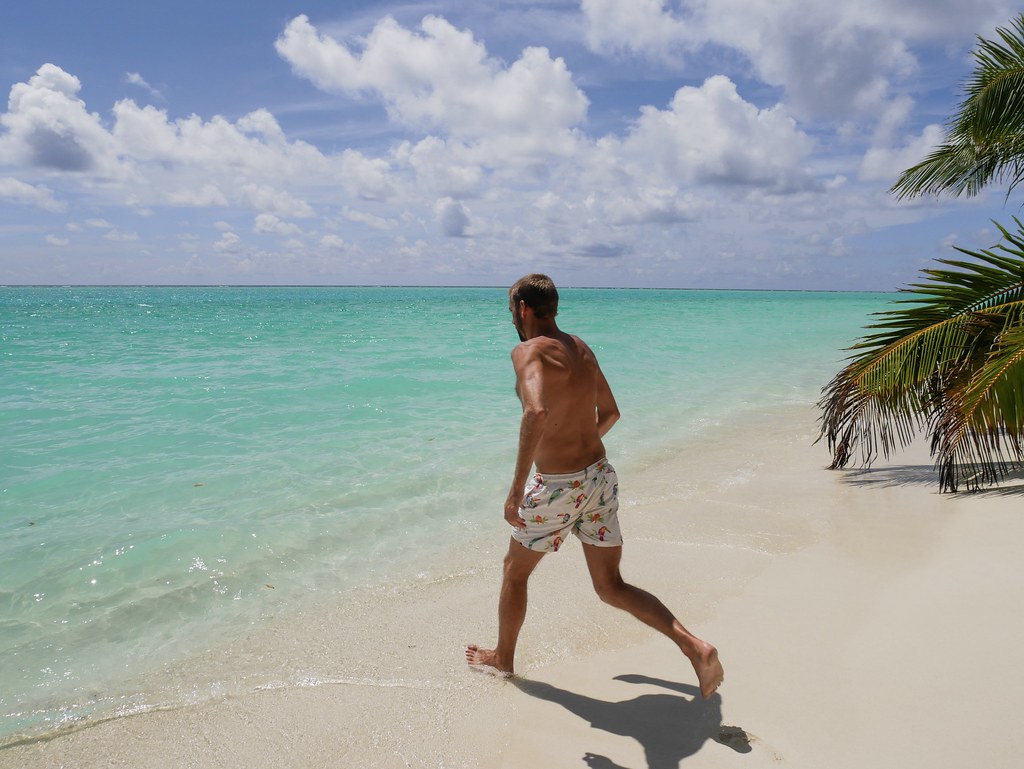 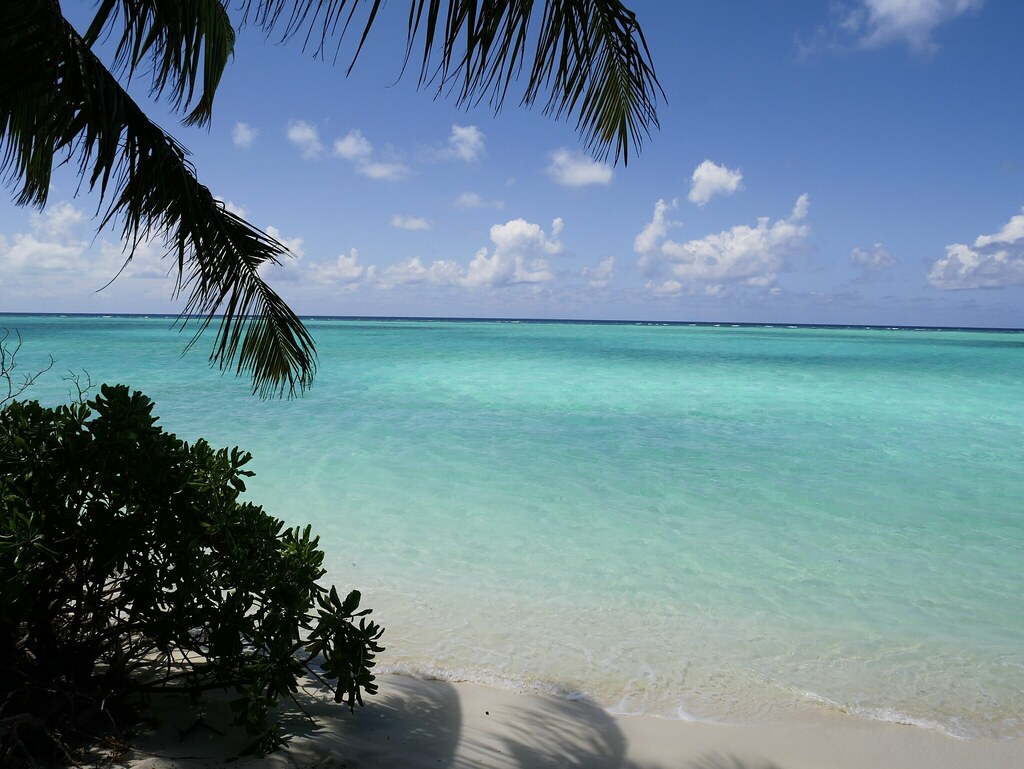 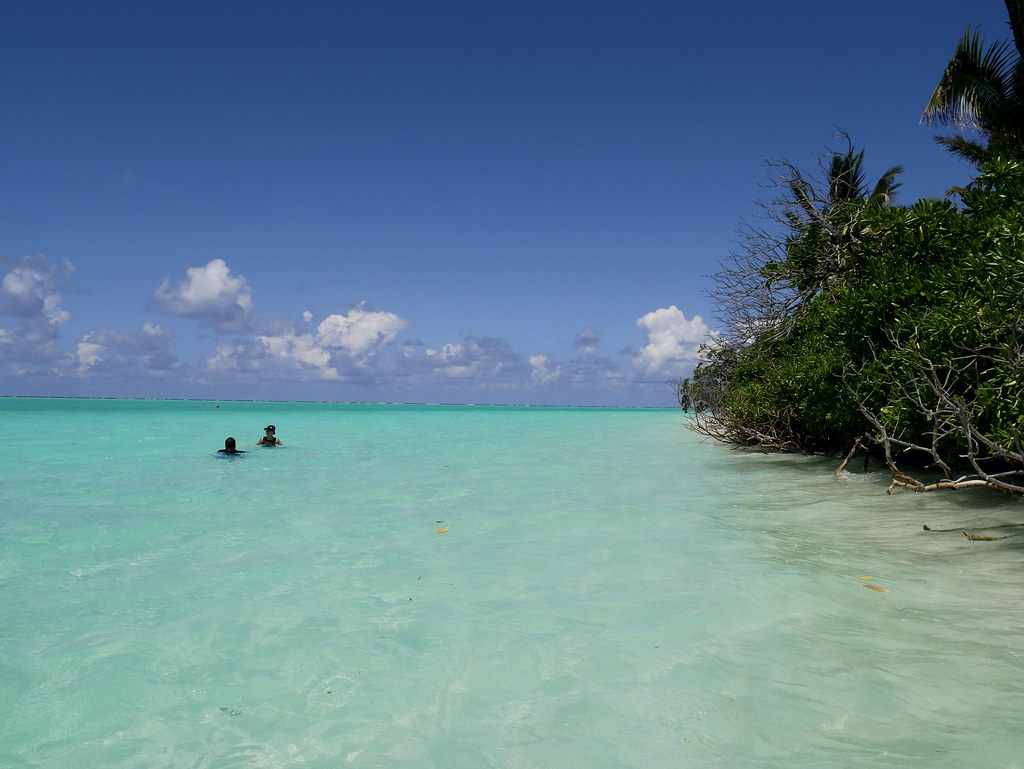 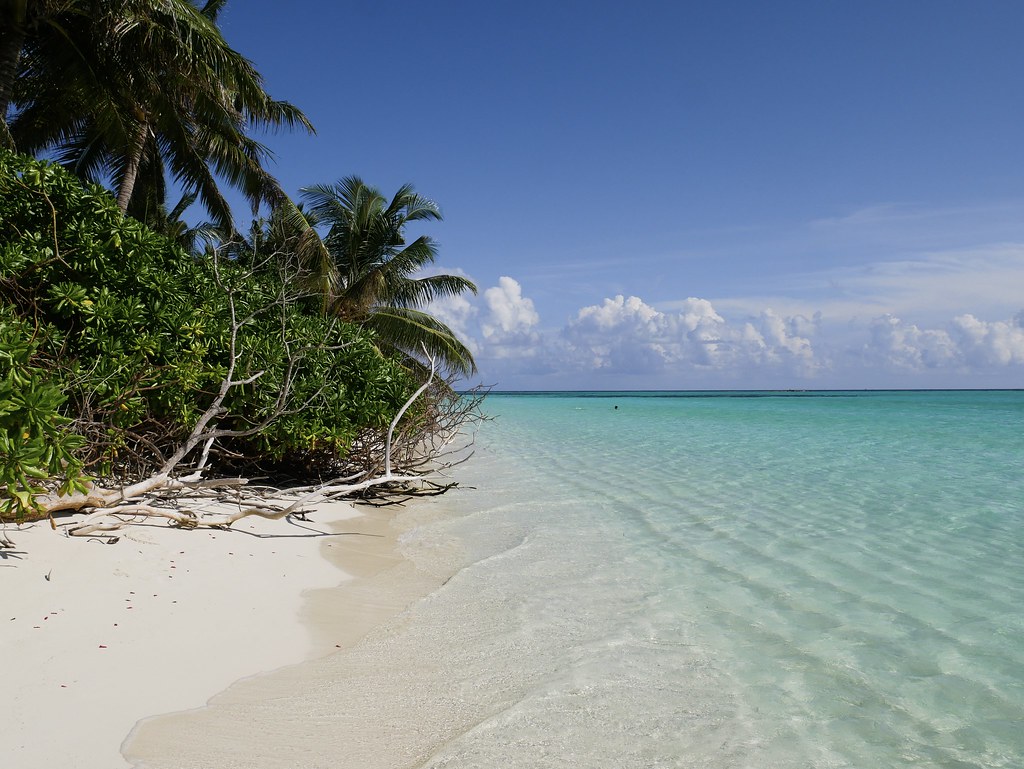 It was indeed a lovely place to swim, I guess that’s something we didn’t do much of in Dharavandhoo but the sea was so calm there that I just enjoyed laying in the shallows reading my book. We decided to head out for a snorkel to the turtle area and we saw lots of them. All of the coral was the same variety, yellow, green and spiky and the turtles clearly loved the taste of it as they were feasting on the stuff and breaking chunks off with their beaks. They were extremely relaxed turtles and fearless of humans so it was a great opportunity to just float and observe them. We stayed at the beach until the sun went down and then we had to cycle back at dusk. The journey was about 10 minutes and I was peddling like mad because all the fruit bats had come out to feed. They were big bats, about a foot and a half wide and they swooped close enough to my head that I could feel the waft of air from their flapping wings. We had dinner at our guesthouse and were shocked at how basic it was compared to Dharavandhoo where we had an endless feast, sometimes even whole fish for Craig and a variety of veg curries for me. Here we had spaghetti with a bit of oil and garlic and then some tuna pieces on Craigs, the drink was literally one drop of fresh juice mixed with water and the dessert was an apple…not even papaya! 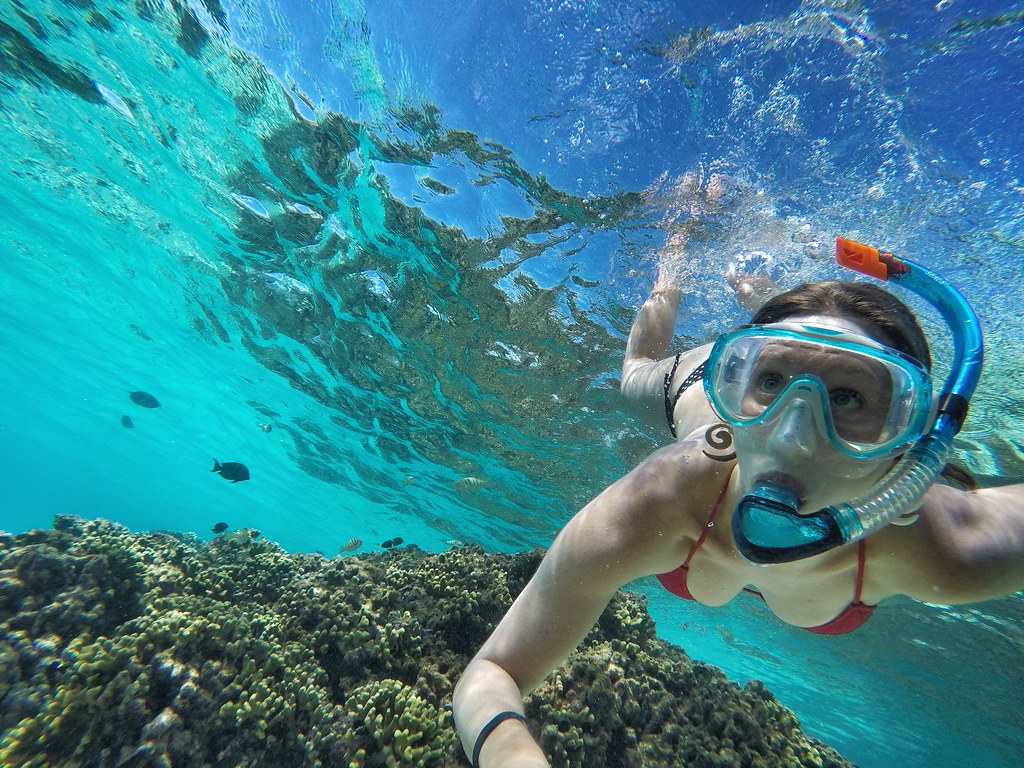 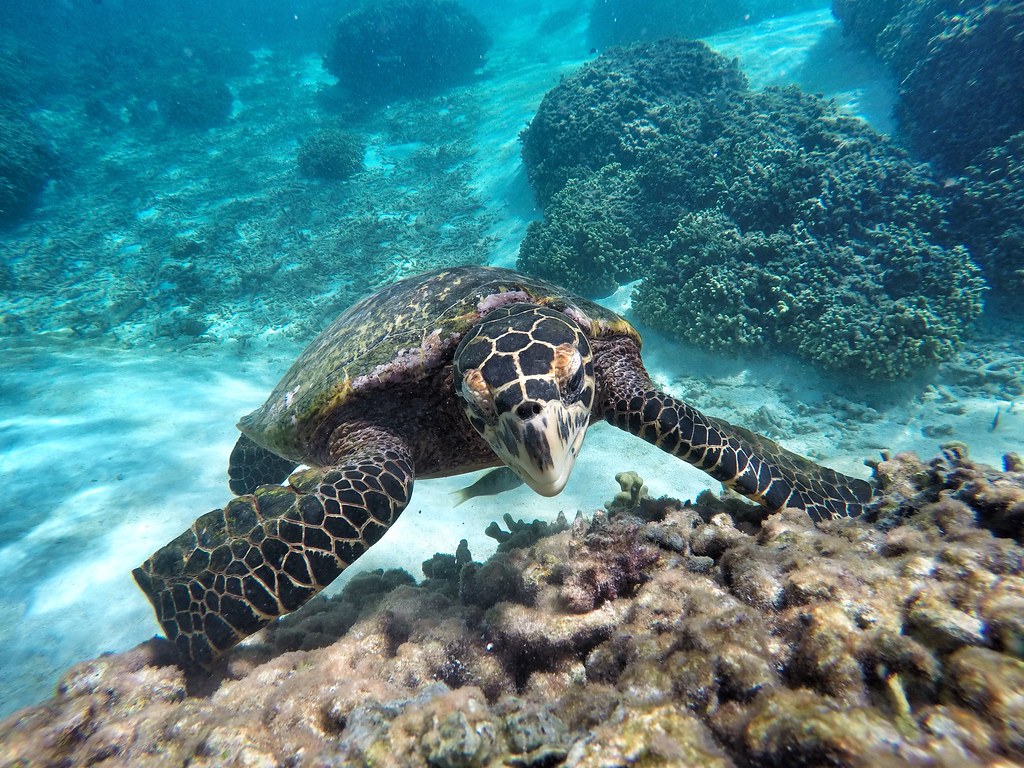 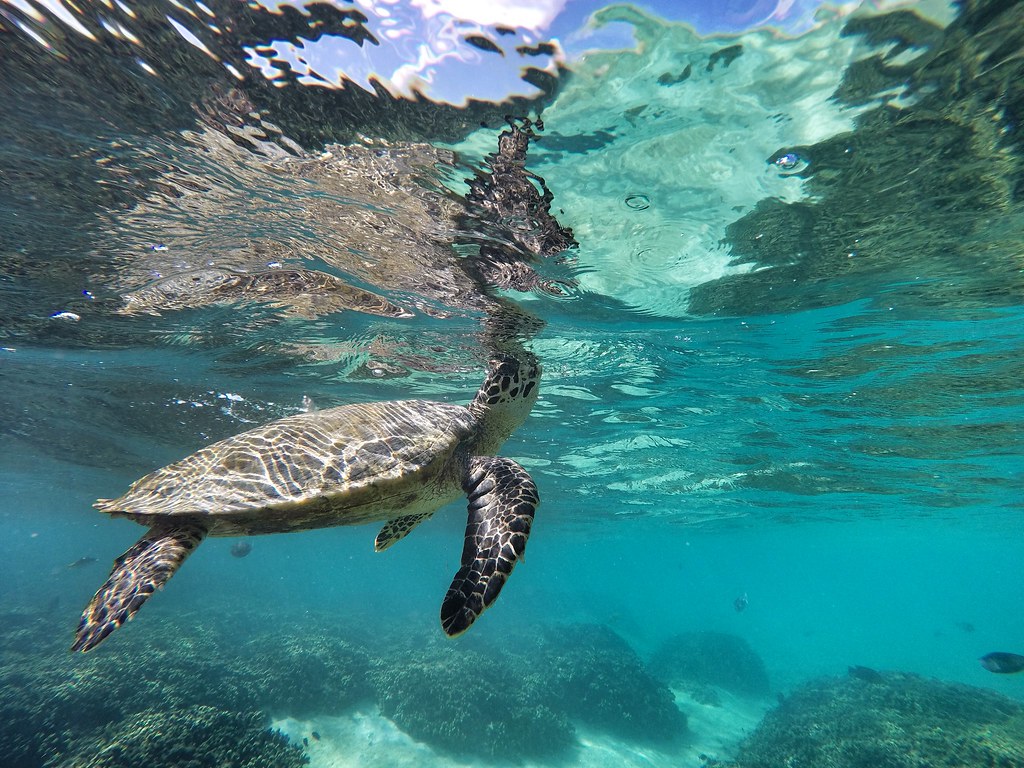 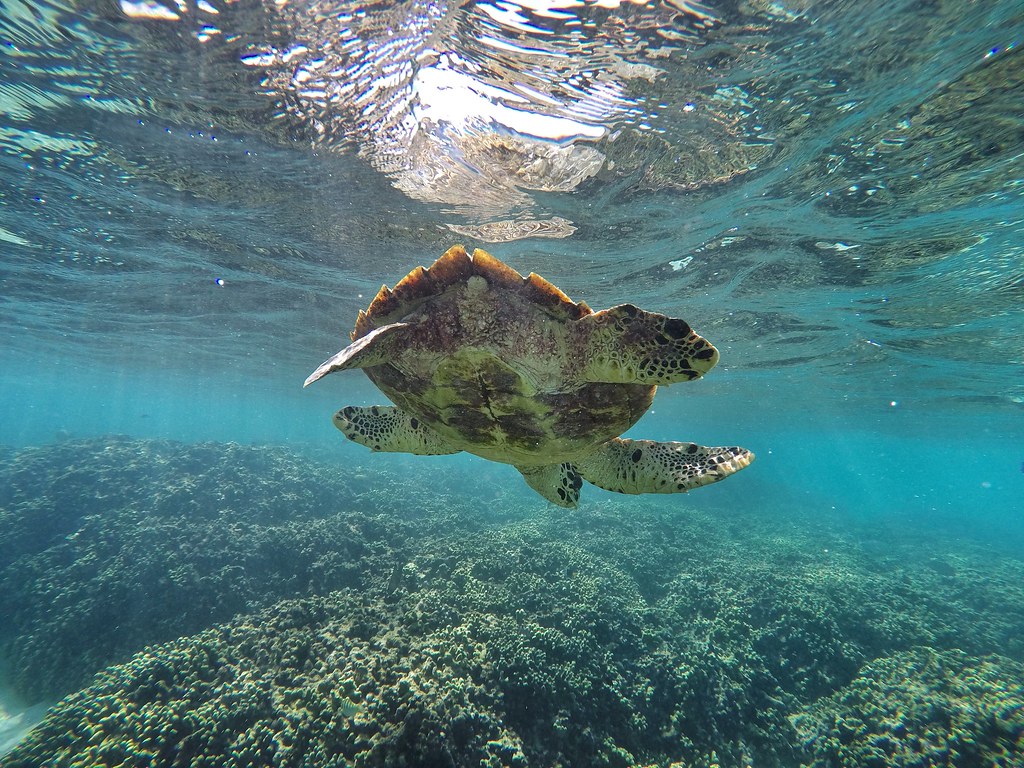 The next morning we did a little cycle ride around the island and headed to the guest beach to give snorkelling a go there. The current was unbelievably strong, even right by the shore and I couldn’t swim just two meters back to Craig so we gave up on that. The weather had changed a bit, we still had blue skies but it was a very windy day and albeit the outlying reef prevented waves coming in, it wasn’t a good beach to relax on so we cycled to the more protected bikini beach. Much to our surprise it was even busier than the day before, in fact there wasn’t any space to sunbath by the sea so we had to search for the final two sun-beds and awkwardly drag them between a family and a guy on a hammock. We pretty much had a private beach on Dharavandhoo….why did we leave that little piece of paradise? I couldn’t help but continuously compare the two islands. 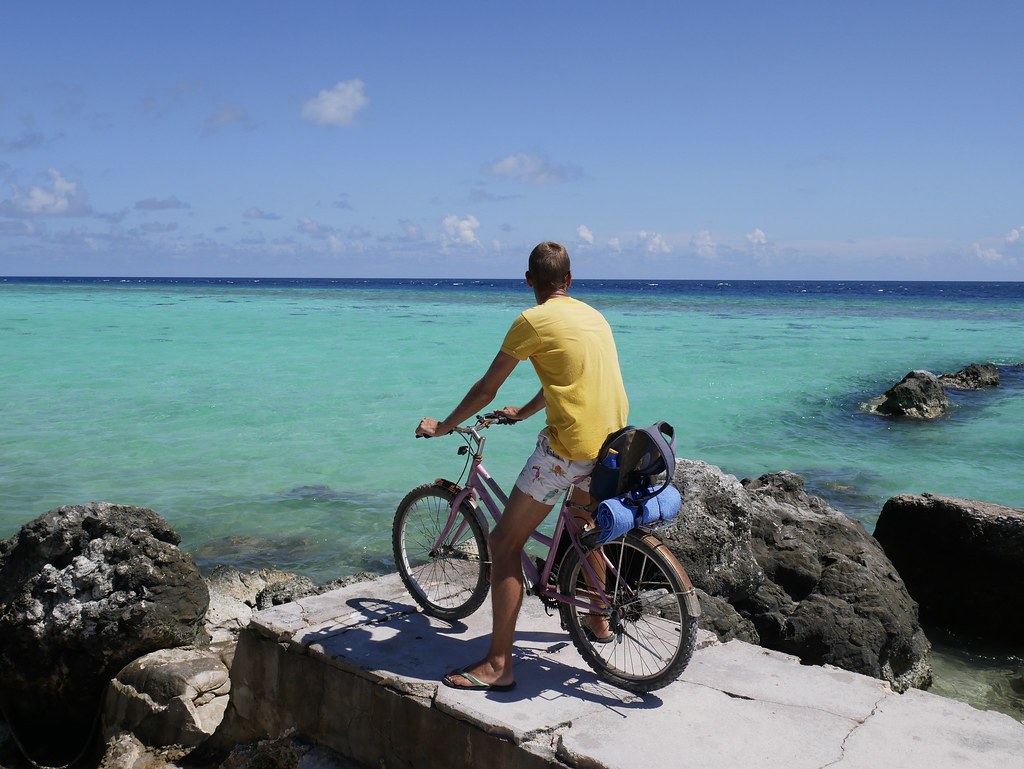 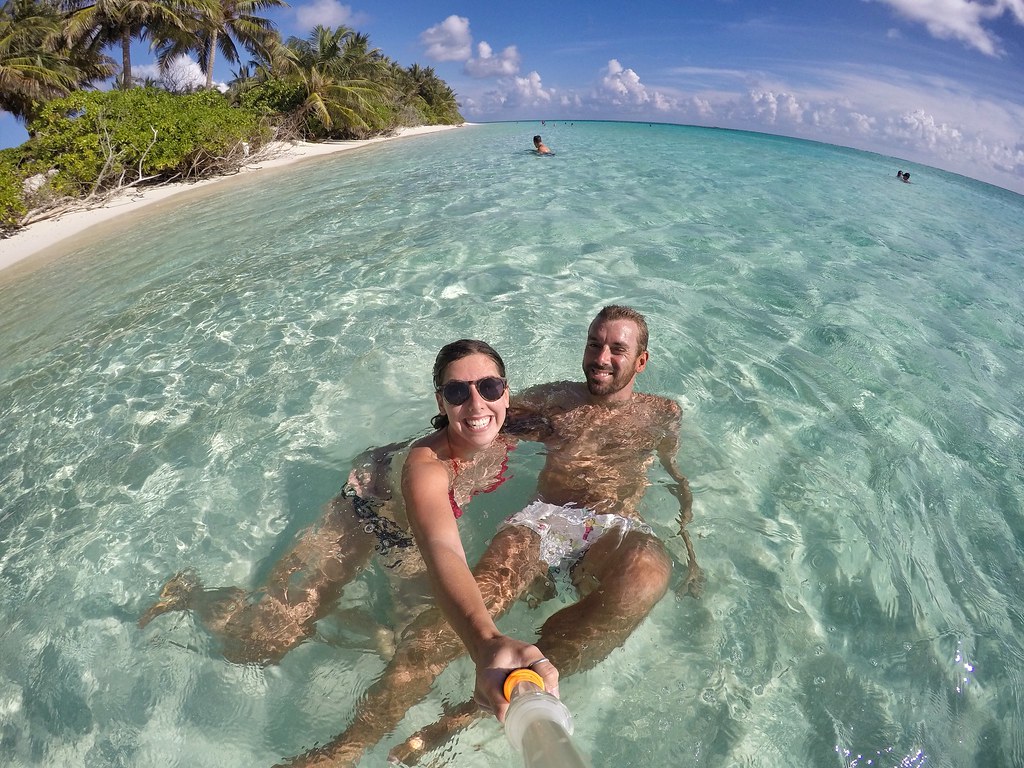 Almost everyone on the beach seemed to be Russians too, which is fine, but I don’t really like groups of the same language speakers, I like a mix, otherwise it feels like I’m the odd one out on a tour that I didn’t even pay to go on. As I was laying there looking out at my narrow view of the beautiful sea I couldn’t help but think Thoddoo Island just wasn’t for us. We’d already snorkelled with the turtles and we couldn’t access the outer reef, plus when we enquired with our host about going on a manta ray trip he gave us a really feeble answer “it’s windy, manta don’t like, maybe manta, maybe no manta”. We like a variety of things to do, I’m quite happy snorkelling a large area and then relaxing on the beach but on Thoddoo it was just the beach and we decided we’d be bored by the end of the day, let alone with the two more days we had pre-booked. So we headed back to our guesthouse and explained to the host that we came to snorkel and see mantas and we couldn’t do either so we were leaving earlier than expected, luckily we hadn’t paid upfront and he, in his very emotionless manner said it was ok. Our plan was to head south to Feridhoo Island the following morning and it would be our first experience on a local ferry in the Maldives. 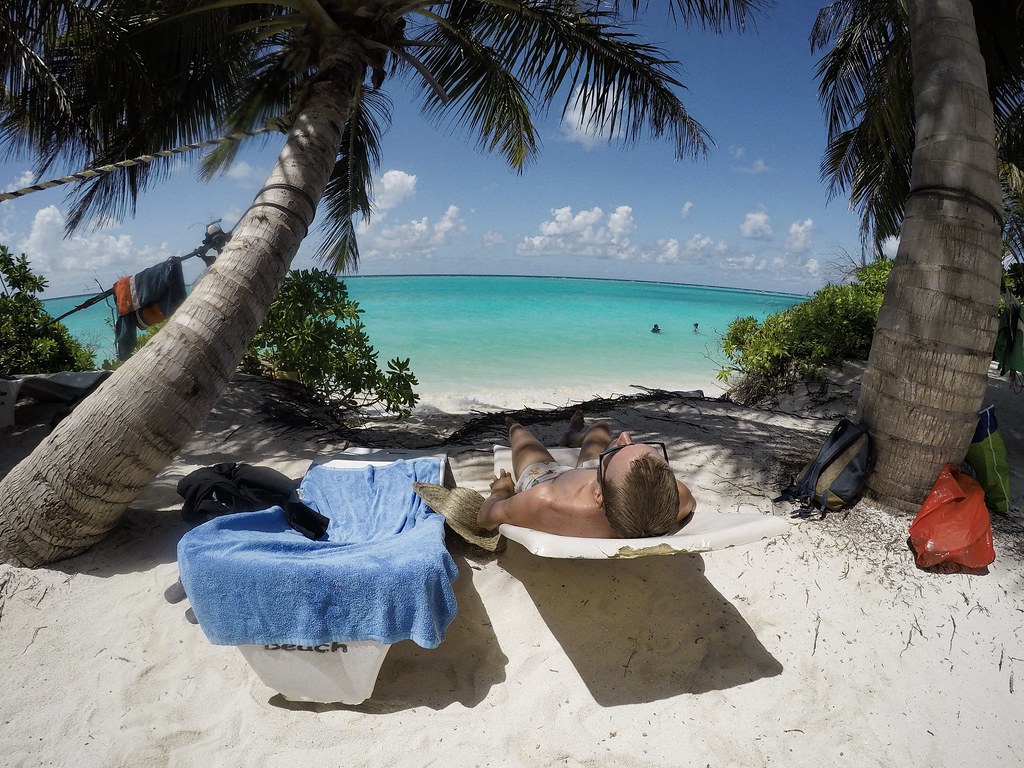 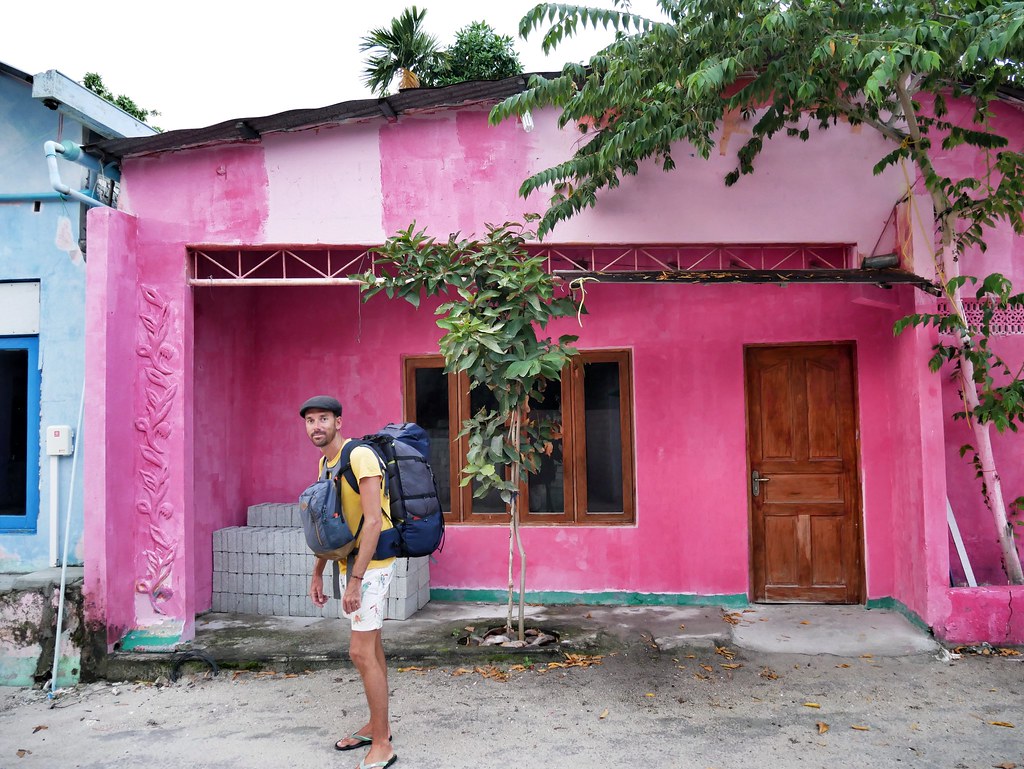