Ukulhas island was the fourth and final local island we visited in the Maldives and our last chance for seeing manta rays. It’s a fairly popular island with a big selection of guesthouses, a few eaterys and an award for being an eco friendly island. Our guesthouse host met us at the jetty and he seemed very well dressed for the occasion, looking more like a young estate agent. Instead of the usual taxi service he just walked us on foot to the guesthouse as it was nearby. Mind you he didn’t offer to help carry any of our bags, I guess he didn’t want to get his suit dirty. 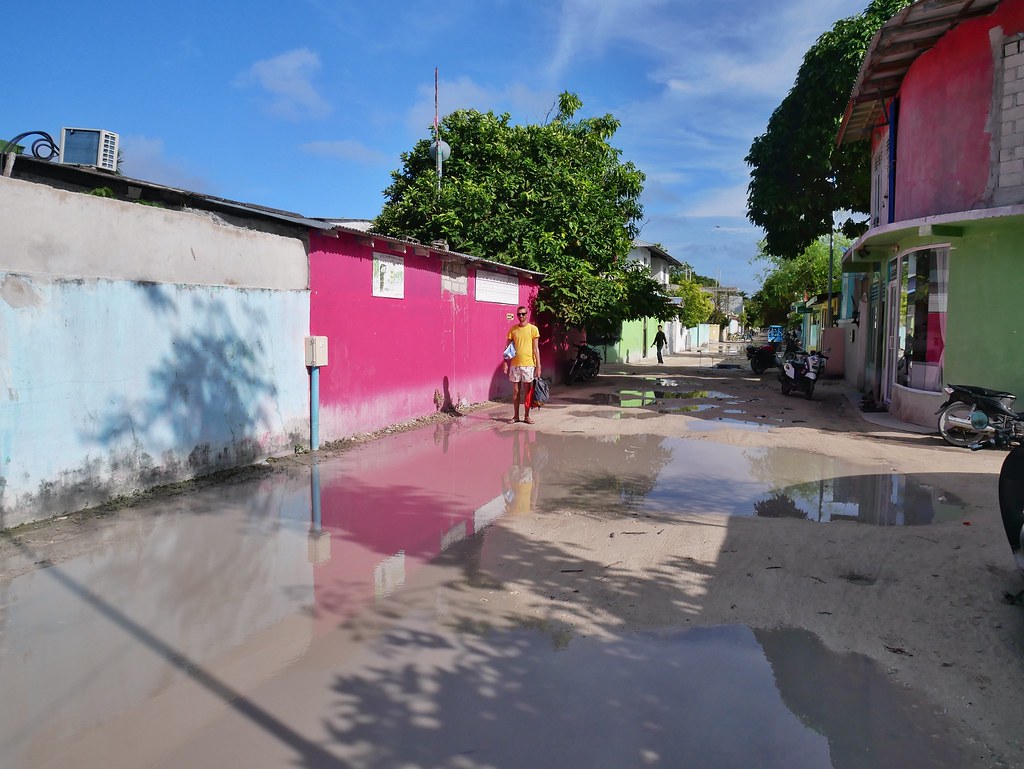 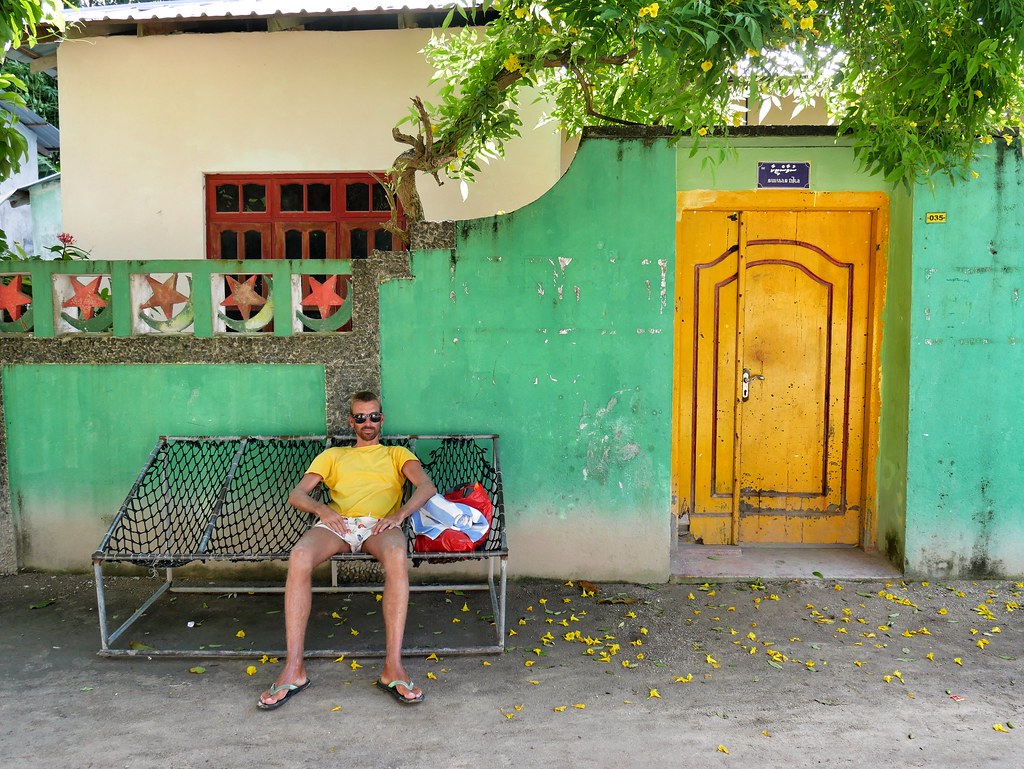 He showed us a map of the island and explained that the bikini beach covered a huge area of the island which was great as it’s a more popular island so at least everyone could spread out. Once we checked in we headed straight to the beach which was really long but not very user-friendly as it had a narrow area of slanted sand so the sun beds were at an awkward angle and sharp, dead coral made entering the sea almost impossible. A big storm was coming our way and the sea was really choppy but we decided to snorkel anyway. It’s amazing how the underwater world can be unaffected by the weather and after the first horrible 20m stretch with almost no visibility, things cleared up and we hovered over the drop-off with two reef sharks swimming circles around us. We didn’t spend too long out at sea as we wanted to make sure we could swim back safely in the rough conditions. 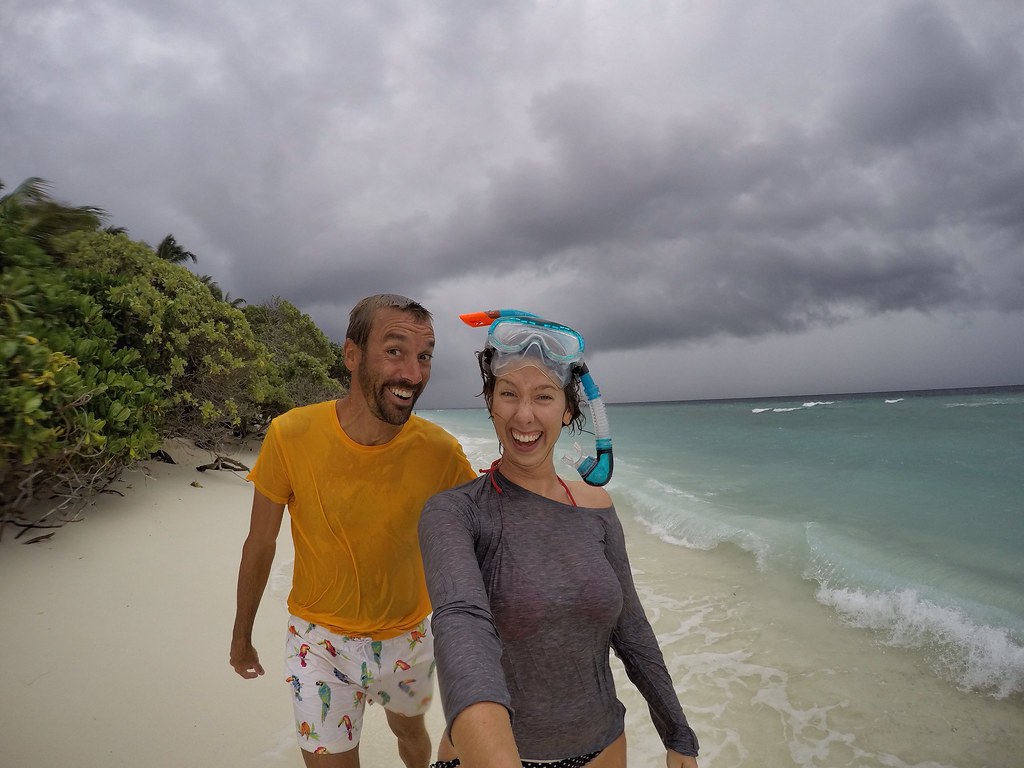 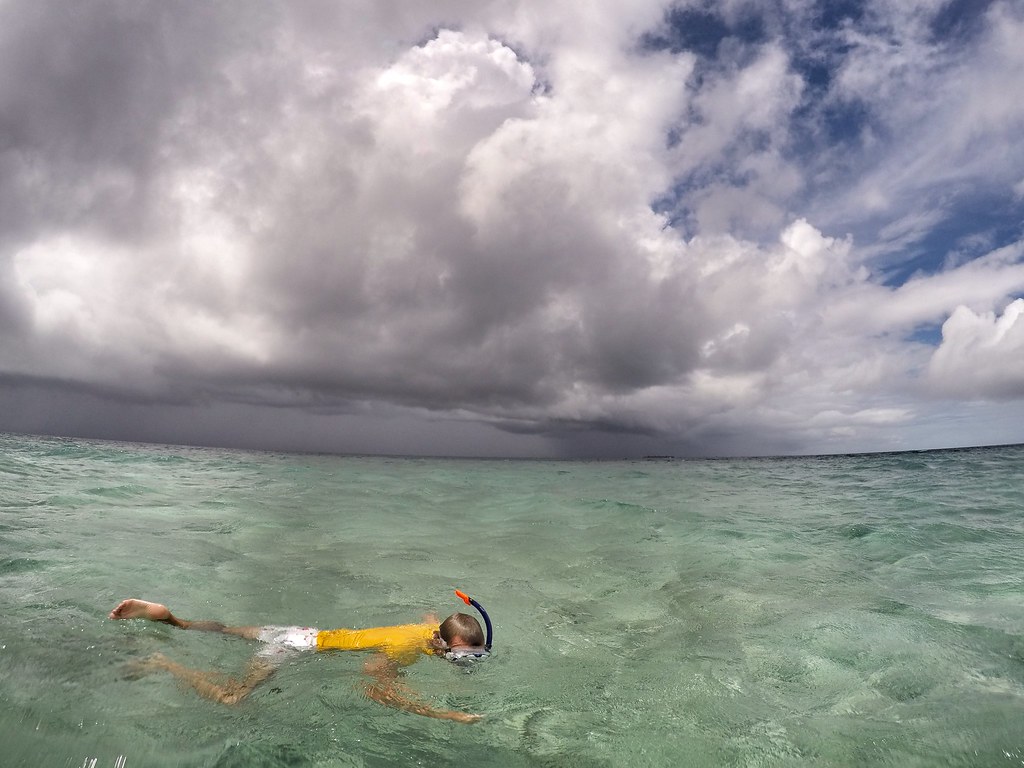 The next morning was the big day, we booked to go on a manta ray trip and our host gave us positive news saying they’ve seen mantas on every trip bar one. It was just us on the boat with our guesthouse helper and the boatman. The journey to the feeding station where the manta rays are known for coming to eat was only a 10 minute ride..so the $60 we payed per person seemed rather extortionate considering what we got for way less money in Dharavandhoo, but I think the islands have a monopoly going on and know everyone wants to see the manta rays.

As soon as we arrived in the area the boatman pointed out three black objects in the sea…the mantas were there and we had barely a second to get ready before the guide was ushering us to jump off the boat. Craig and I sat on the edge of the boat ready to slip off the edge but just as he did I noticed the boat had drifted and Craig was practically underneath me so I had to stop myself halfway down to prevent crushing him. My arms pulled back as I held onto the boat with my legs dipped in the sea and I felt all my muscles pull. Before I could recover, our guide grabbed my limp arm and power swam me away from the boat and pointed ahead. Low and behold, our first manta ray came gliding like a giant dinosaur style bird towards us. Wowee, we were instantly impressed by its size and gentle motion. 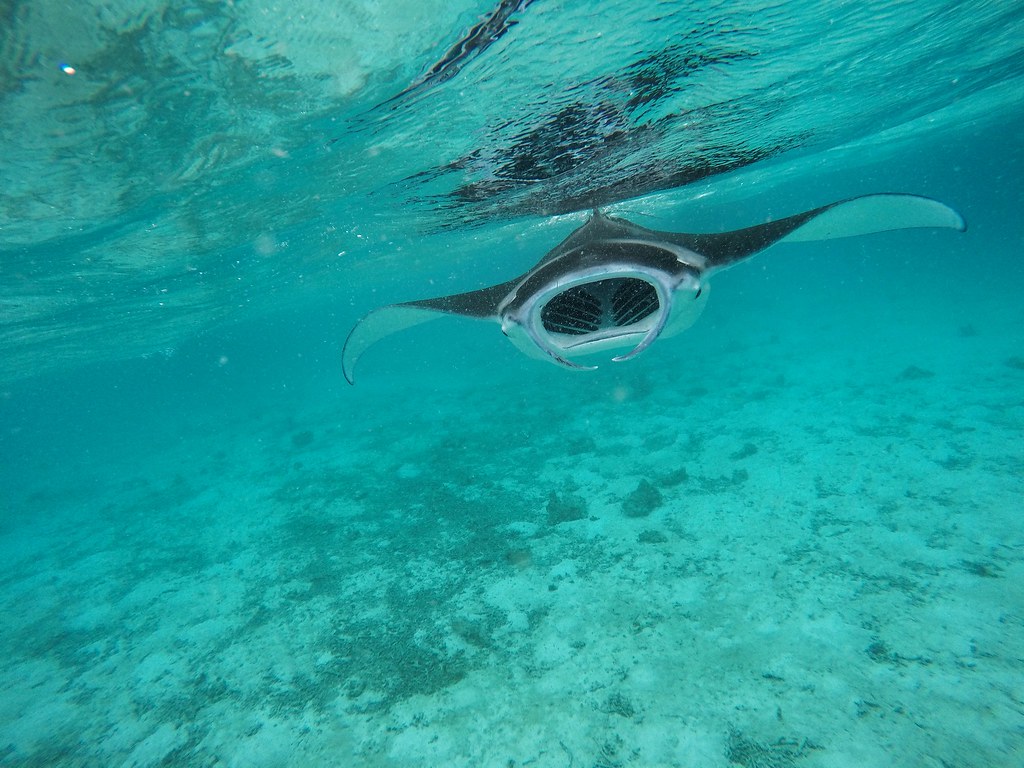 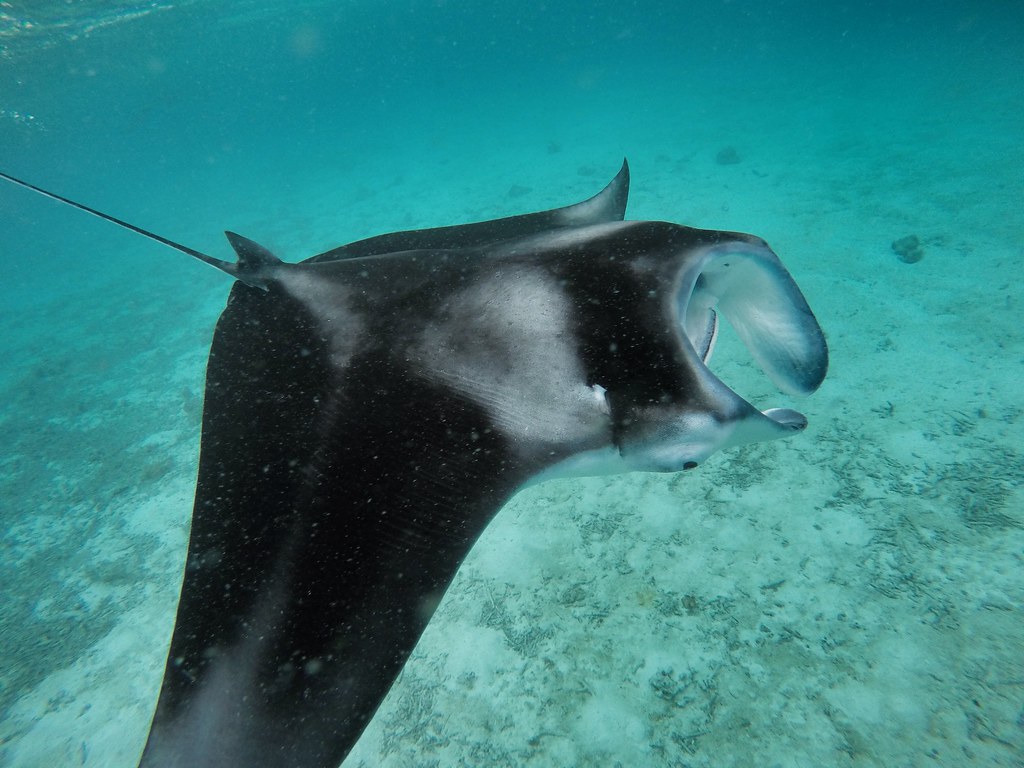 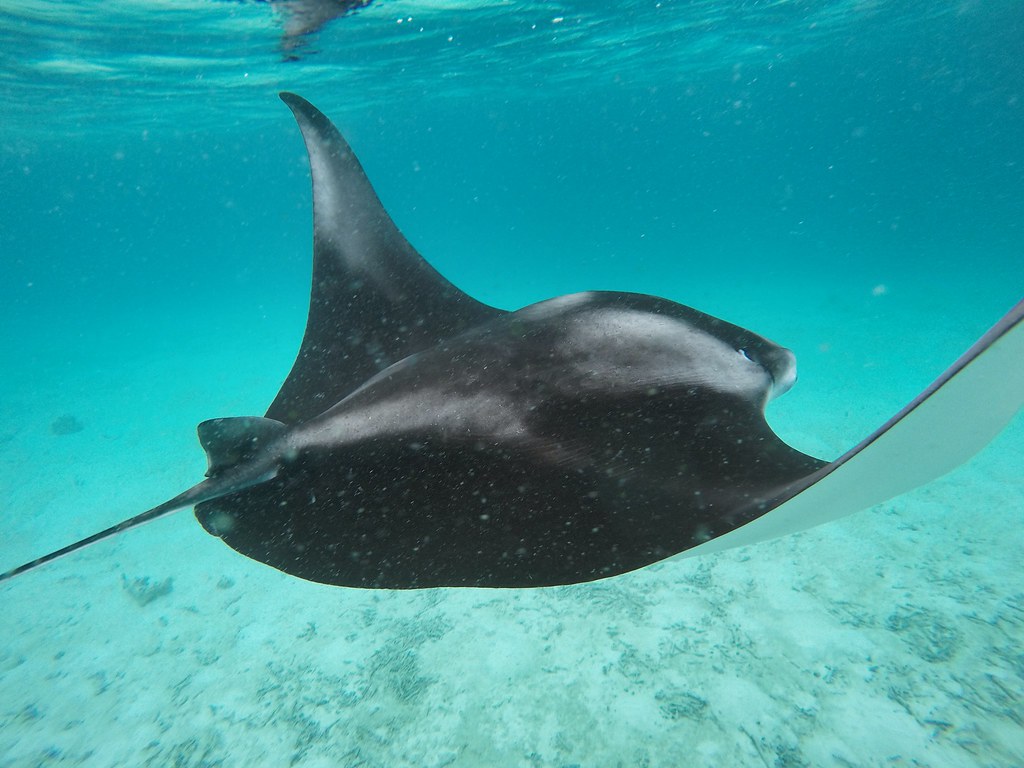 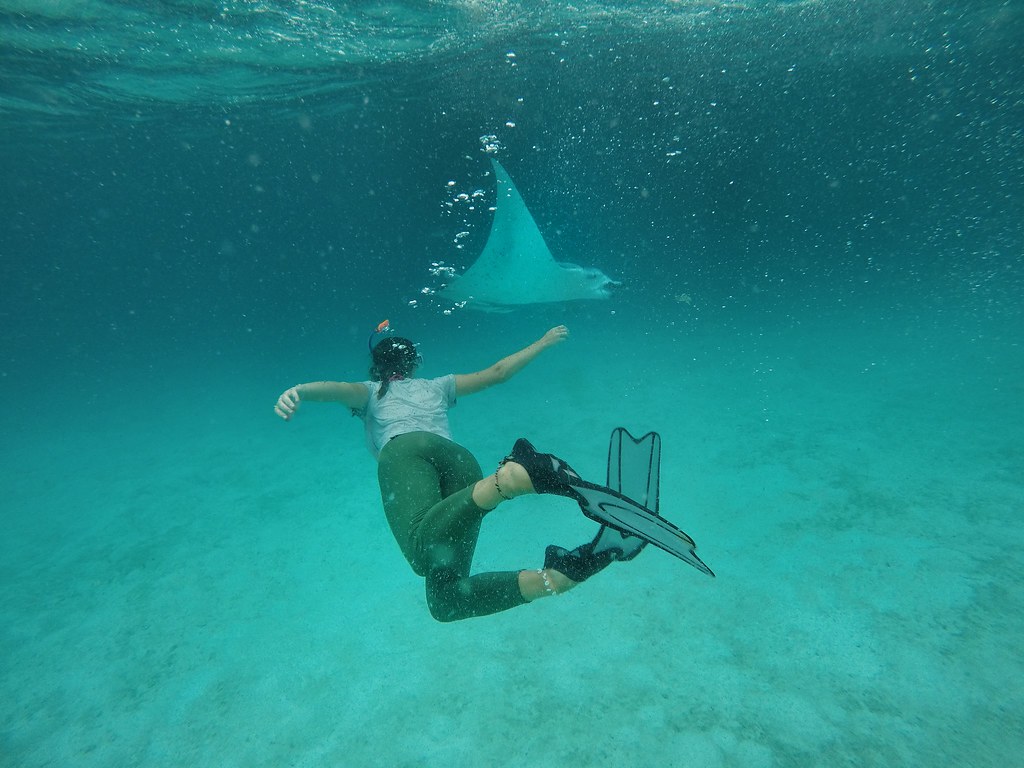 Manta rays can grow up to 3.5m wide yet they feed on the tiniest of things: plankton and krill and that’s what we witnessed them doing with their mouths wide open. They were funny looking things with big white mouths full of ridges and eyes positioned on the side of their faces. We had about 5 manta rays circling around us and we had to keep spinning around incase one was coming our way. At one point the boatman shouted to us to look a certain direction as he could see them moving our way and out of the darkness came three manta rays gliding together with mouths wide open. 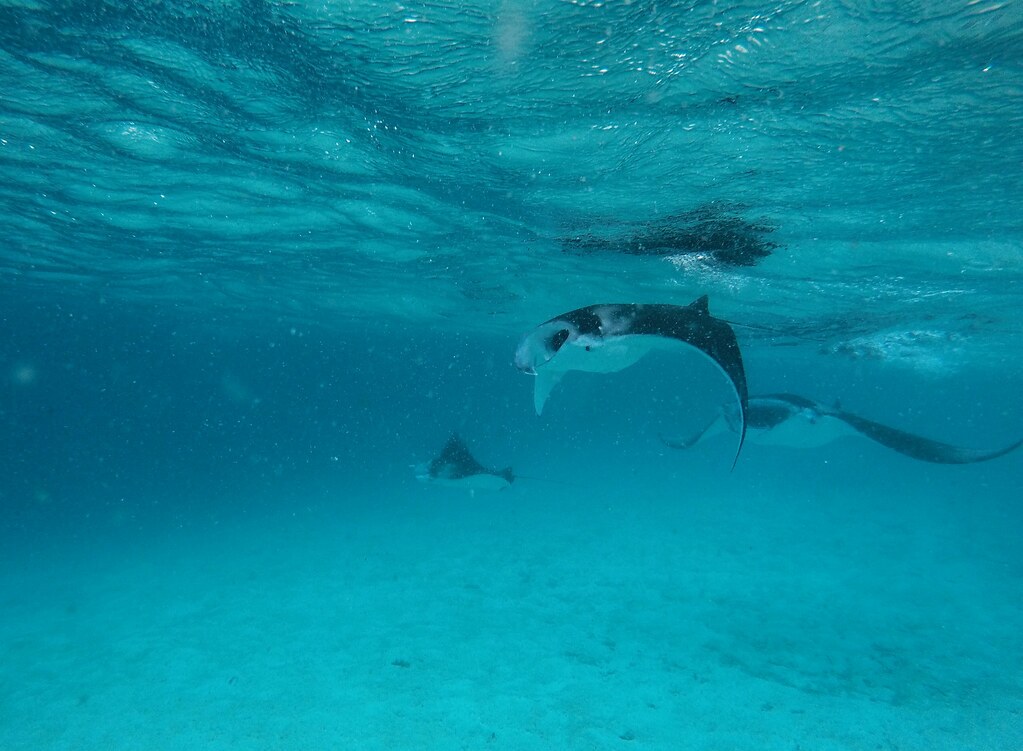 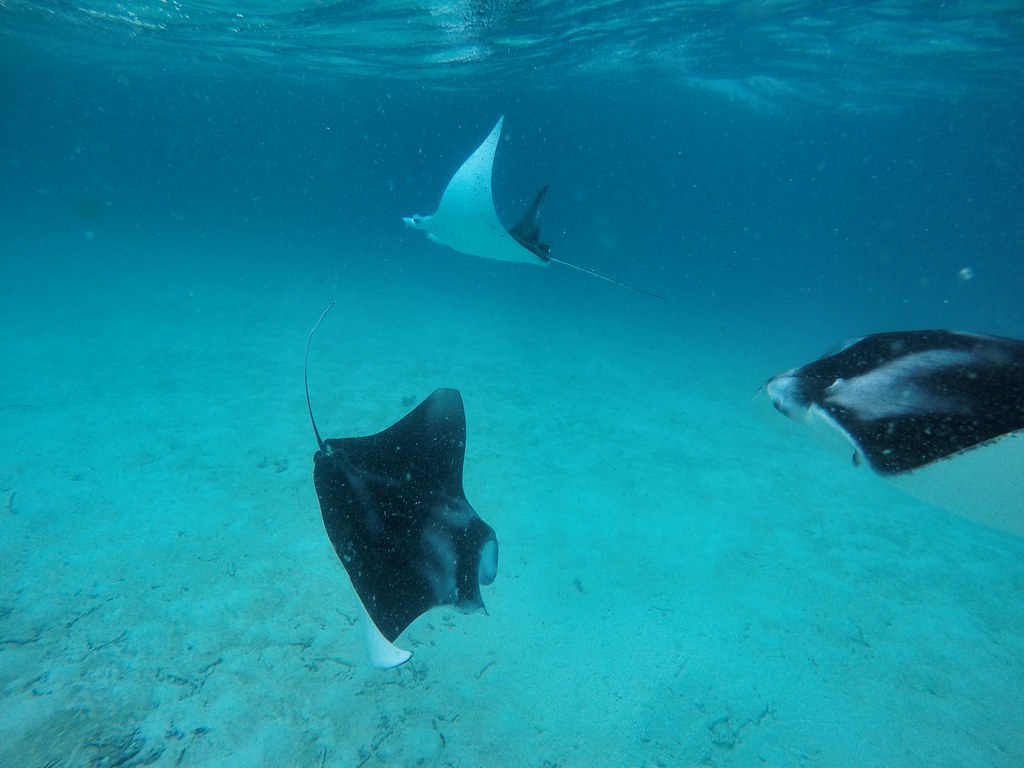 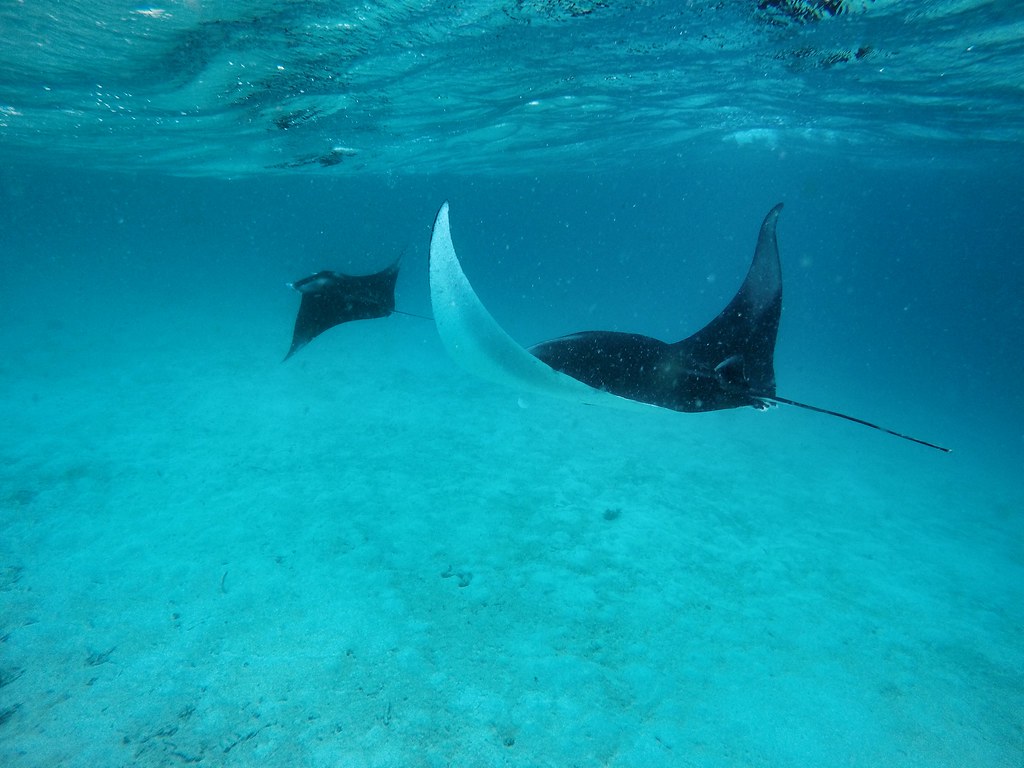 Some swam directly beneath us or just to our side while others performed impressive u-turn’s when they saw us ahead of them, turning their whole body sideways, a bit like the magical bus in Harry Potter which goes from normal size to extremely narrow. They varied from about 1.5 – 2.5m wide so it was the bigger ones we were most excited to swim with, seeing their massive wings sway in the water was a mesmerising experience. It was a really wonderful trip and to be fair, it was worth the $60. 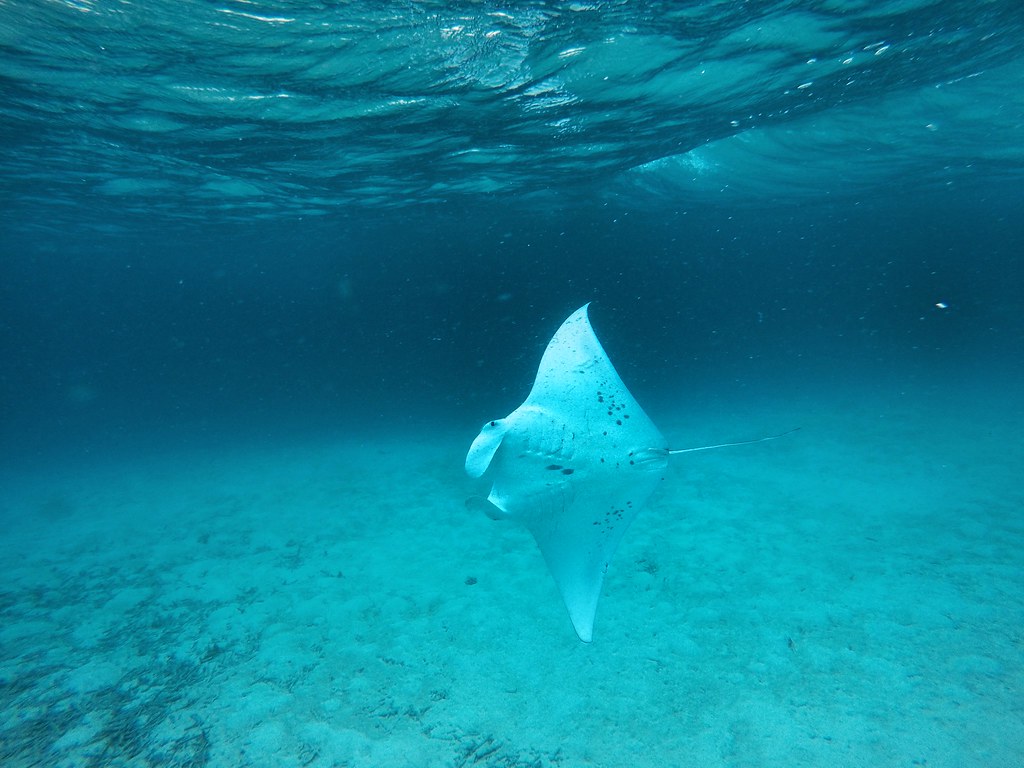 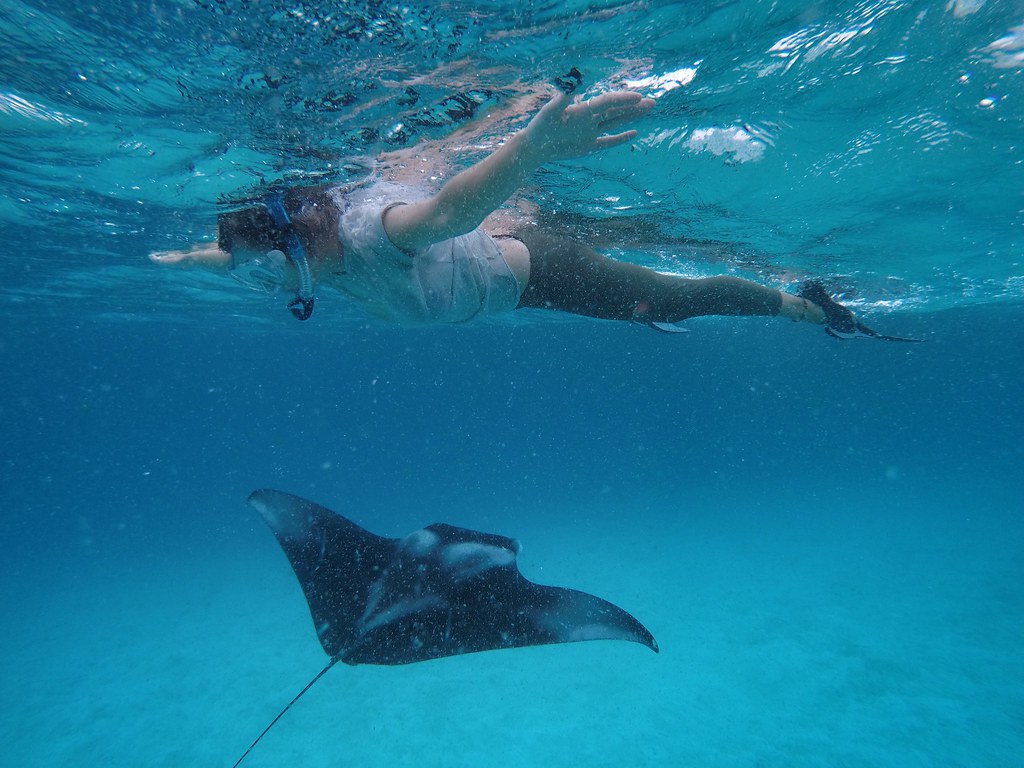 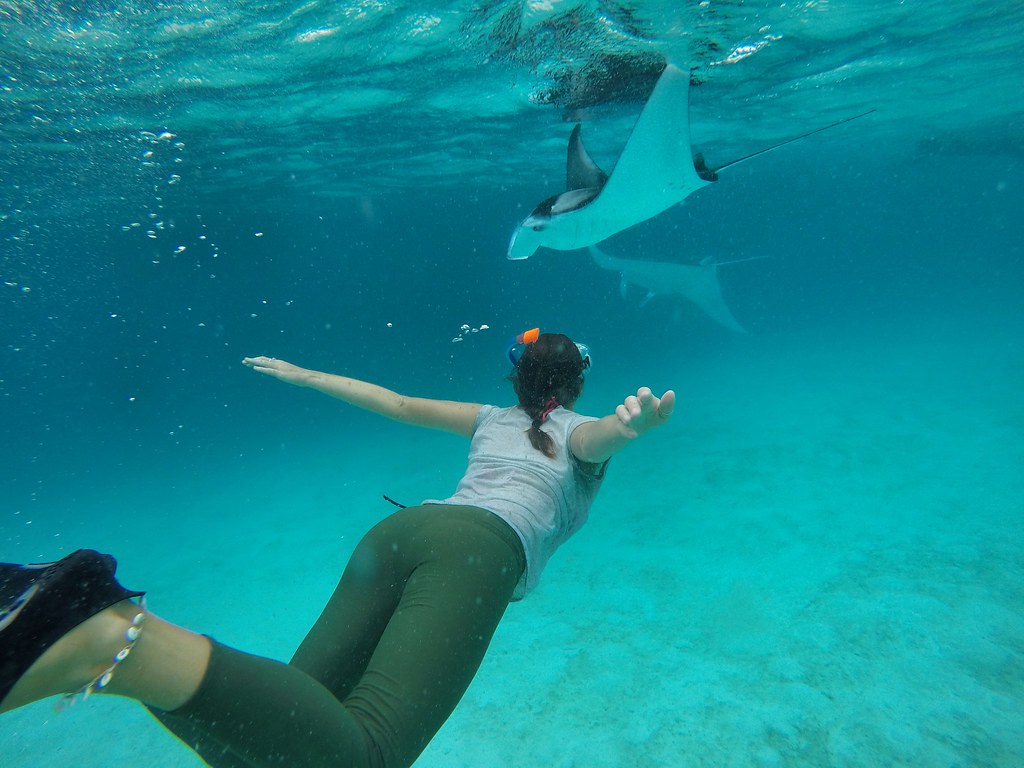 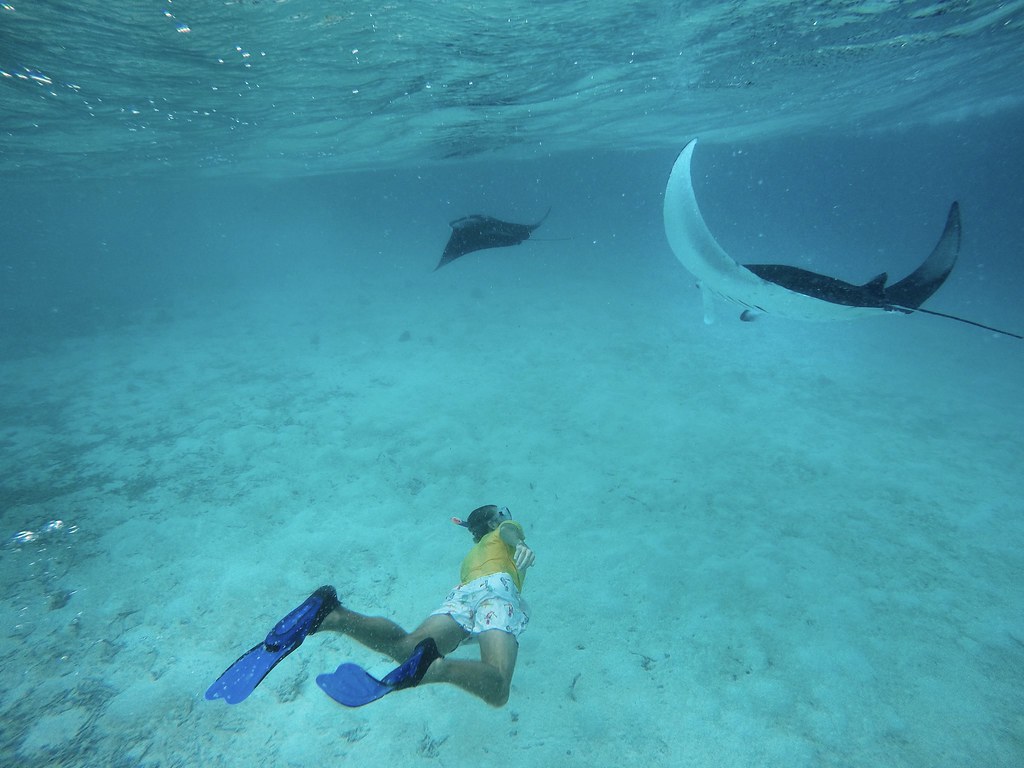 On our way back we saw three more in the sea, annoyingly they were right by the beach on Ukulhas island, so we could have seen them without paying. Our guide seemed to enjoy the experience as much as us though so he said “let’s jump in again”. The sea was so dark below us but we swam closer to the shore and the mantas came right towards us. The visibility was terrible so we were happy that we paid to go to their feeding ground where the water was clearer. We were very unfortunate with the weather on Ukulhas, it rained most days and the road through the island became one long puddle. We did enjoy a little sunshine though and found the beach was much nicer around the corner from the snorkelling side as it had a wide area of sand and calm sea. Except for seeing the manta rays and reef sharks, I wouldn’t necessarily recommend the island. The beach wasn’t wow like we’d experienced on other islands, the weather didn’t help matters though. Also it wasn’t as eco friendly as we’d hoped and it actually had more rubbish on the streets than any other local island we visited, we felt like they got the eco award and then neglected the island a bit. The other thing that surprised us was that the beach umbrellas were in an absolute state, torn to tatters and bent sideways but left completely un-repaired. In fact our final 10 days in the Maldives weren’t as special as our first week in Dharavandhoo Island but it was nice to experience new islands and finally see manta rays. 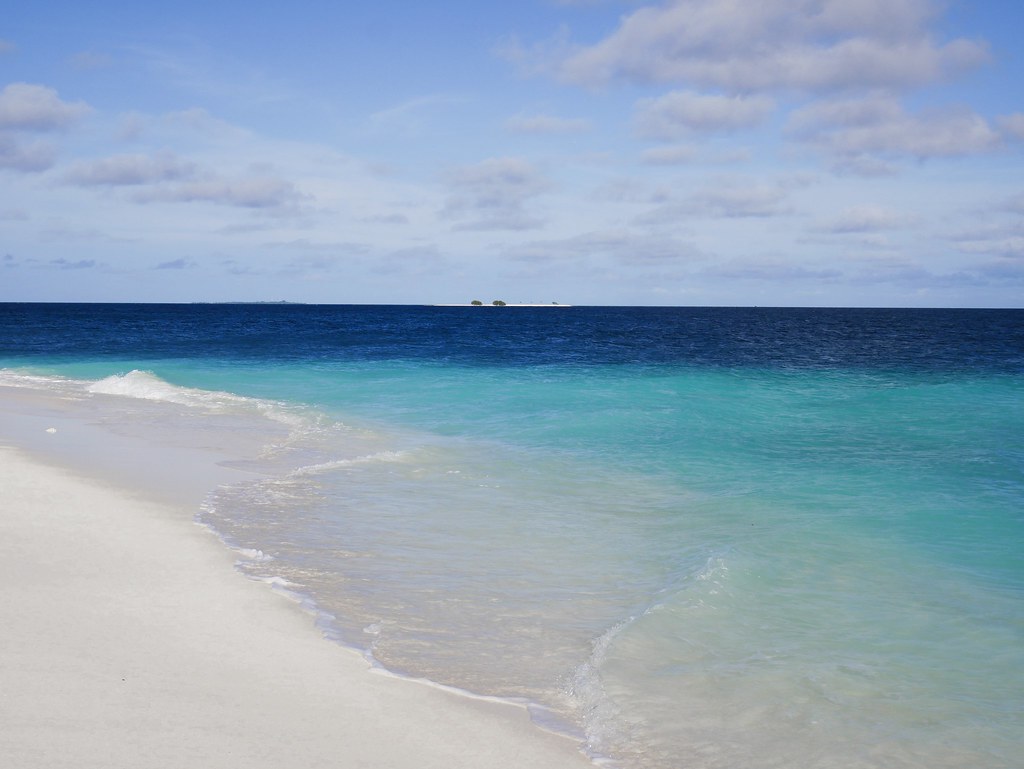 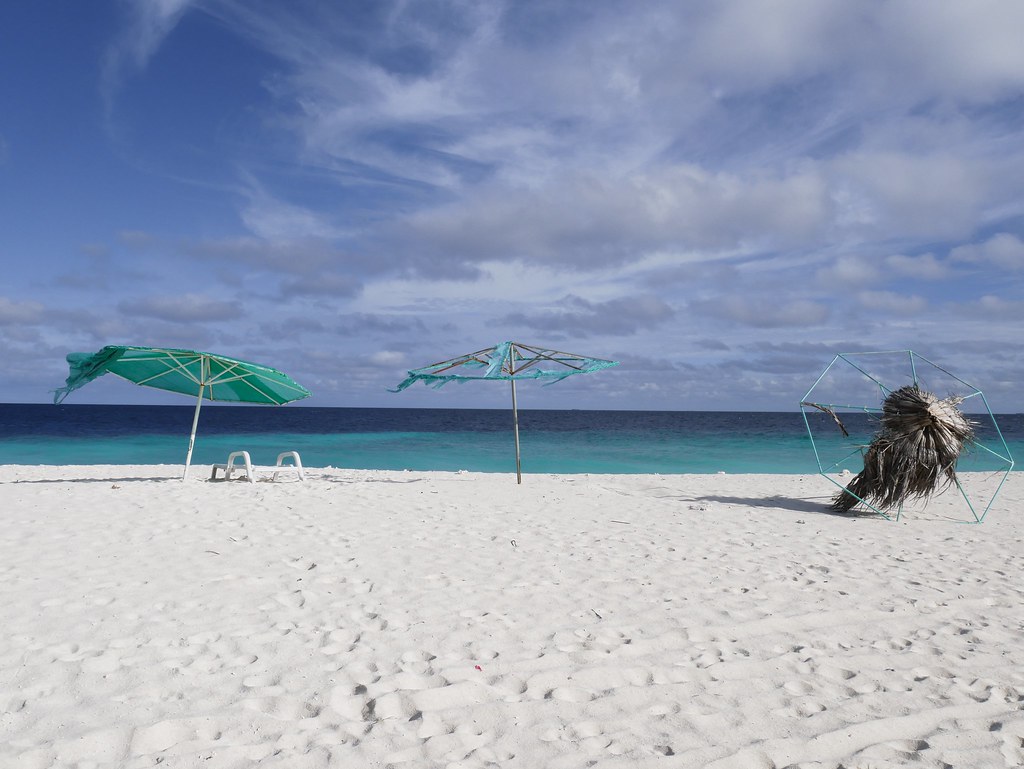 We caught a speedboat back to Hulhumalé where we had to stay for one night. The place was a bit of a shit hole with high rises and new construction everywhere but we had a good rest for one night before our flight to Germany.