I’m a sucker for a sandbank, a slither of sand rising out of the sea, a new island forming and more reason for the Maldivian’s to laugh in the face of global warming. We asked a few locals if they thought the Maldives would be covered by sea in the future and they confidently said no and that the sand is always shifting and creating new islands. Visiting a sandbank is one of the must do’s so we headed on a private boat trip for only $25 per person. It was mesmerising gliding over the calm sea, watching it fade from navy to turquoise as we cruised over the shallows. The sandbank was only a 15 minute boat ride from Dharavandhoo and the white line was always visible on the horizon from our beach….yes I call it ‘our beach’ as for some bonkers reason we were the only people on it. 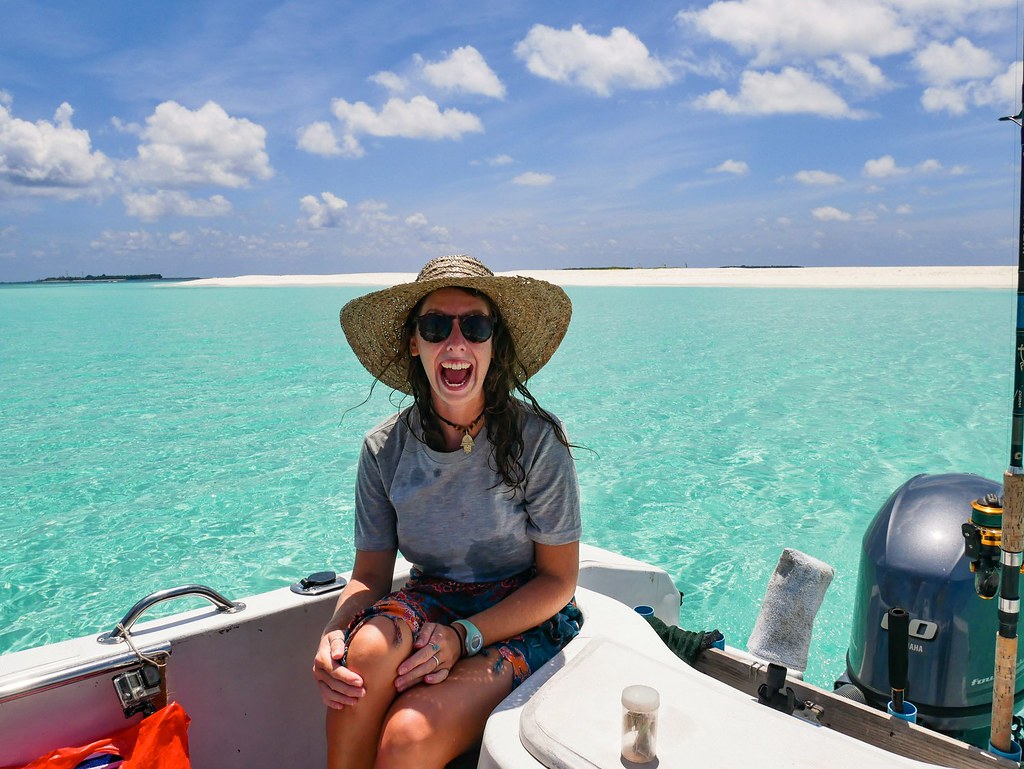 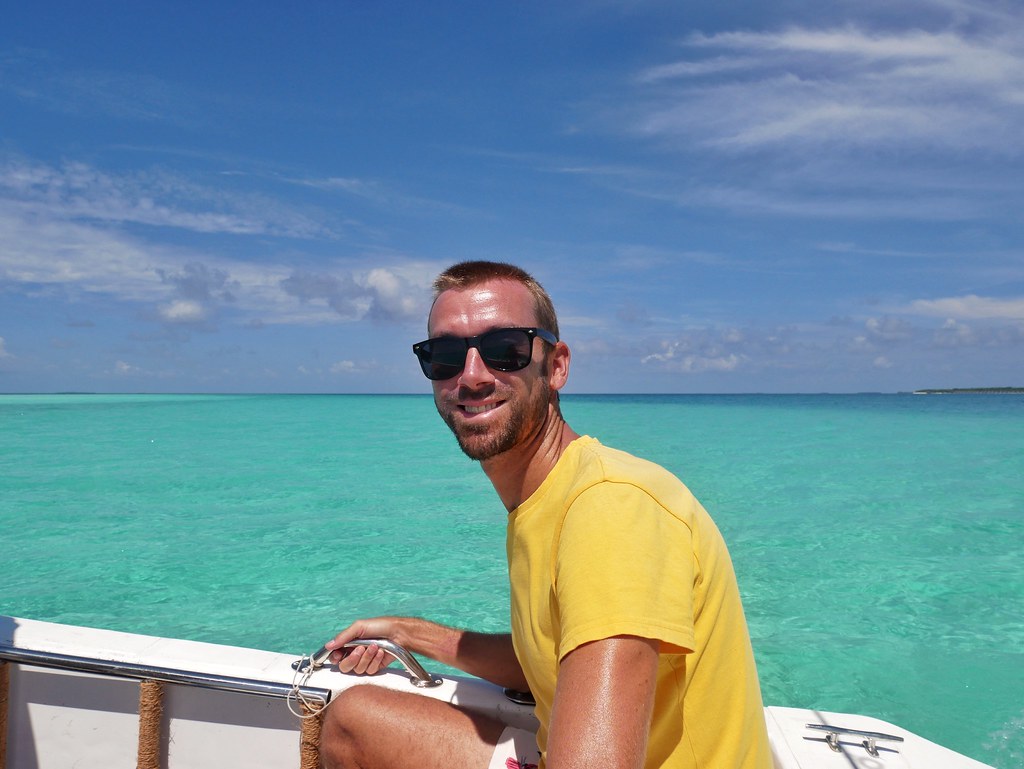 Our faces lit up with excitement as we approached the sandbank, the water around it was unreal and the most incredible aqua blue colour. It twinkled in the bright sunshine and we could see meters down to the sandy floor. Up close the sandbank was actually more of an island than a disappearing string of sand in the sea, the main area was about a meter high (maybe even a competitor for the highest point in the country?!) and a few trees were starting to grow. To the right however was a perfect line of sand being gently lapped by the tropical sea. Our host set up an umbrella and gave us a tub of coconut and orange wedges to nibble on and then he left us on the deserted island while he went fishing for a hour. 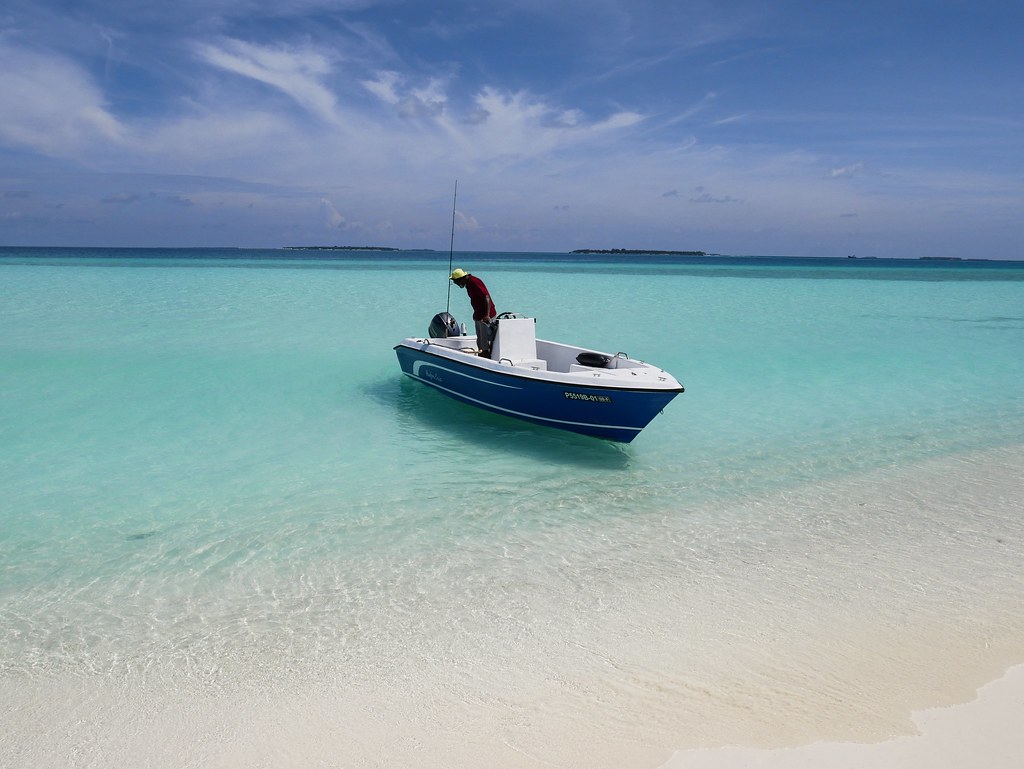 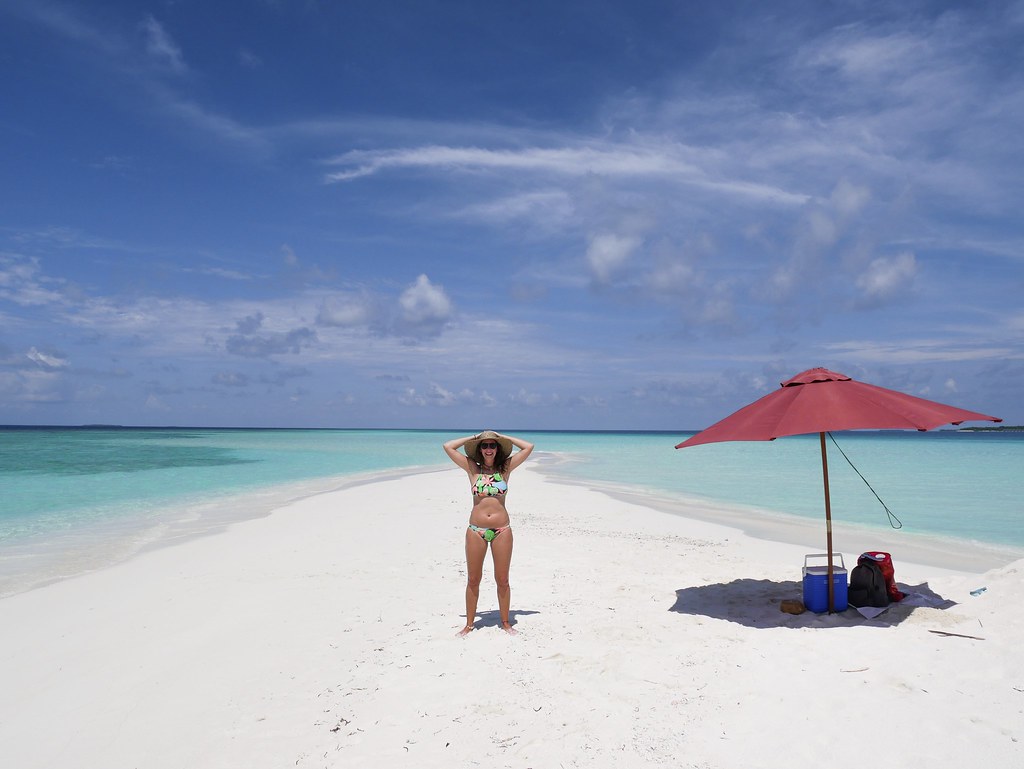 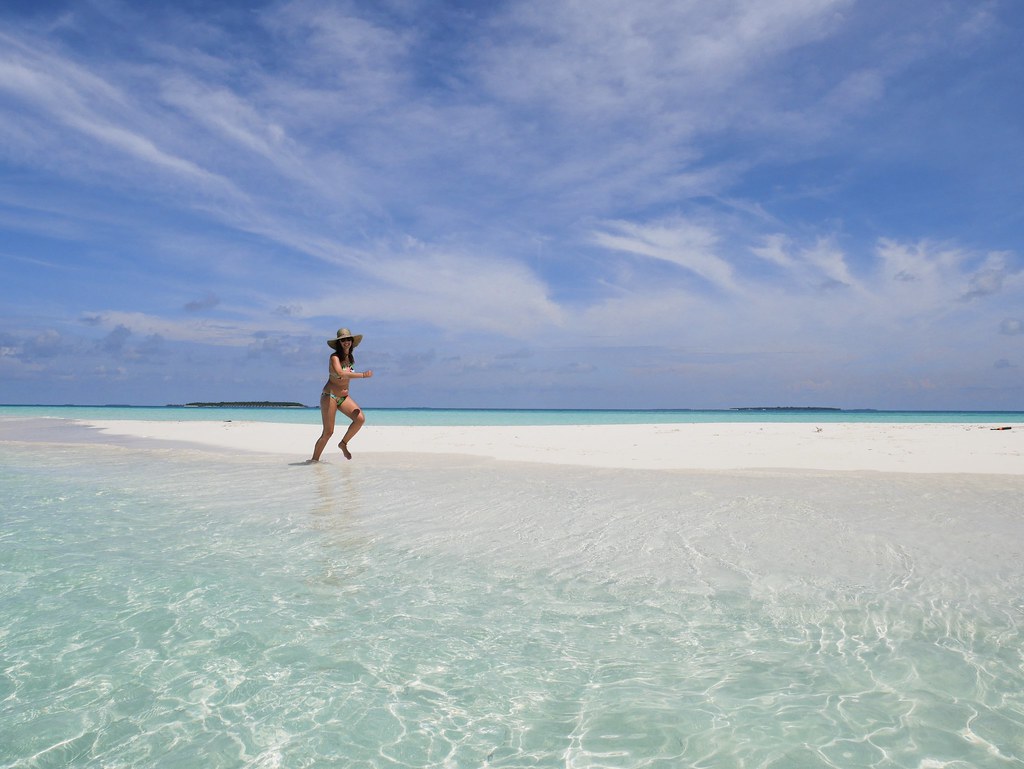 We ran up and down the sandbank like a couple of crazed hooligans, we jumped in the sea and then I did some awkward gymnastic moves that my body wasn’t designed for. I did my usual jokey-bad-cartwheel but a split second before I did it I decided to go the opposite direction for better lighting. That was the last time in my life that I consider lighting and photography before performing a stunt…it turns out cartwheels only work in one direction and I ended up doing the most awkward handstand with sideways momentum which caused me to fall heavily on the hard, wet sand. The ground seemed to shake like an earthquake tremor rumbling beneath us and I’m pretty sure the sandbank sunk a little too and lost its chance of ever competing in the highest point in the Maldives. 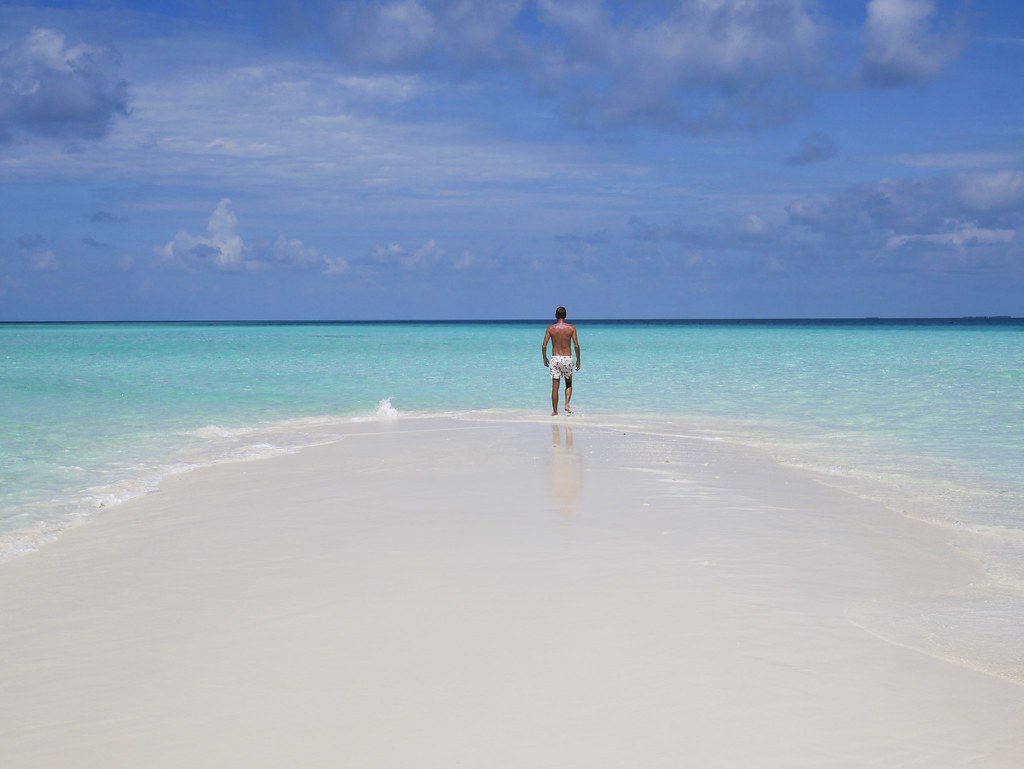 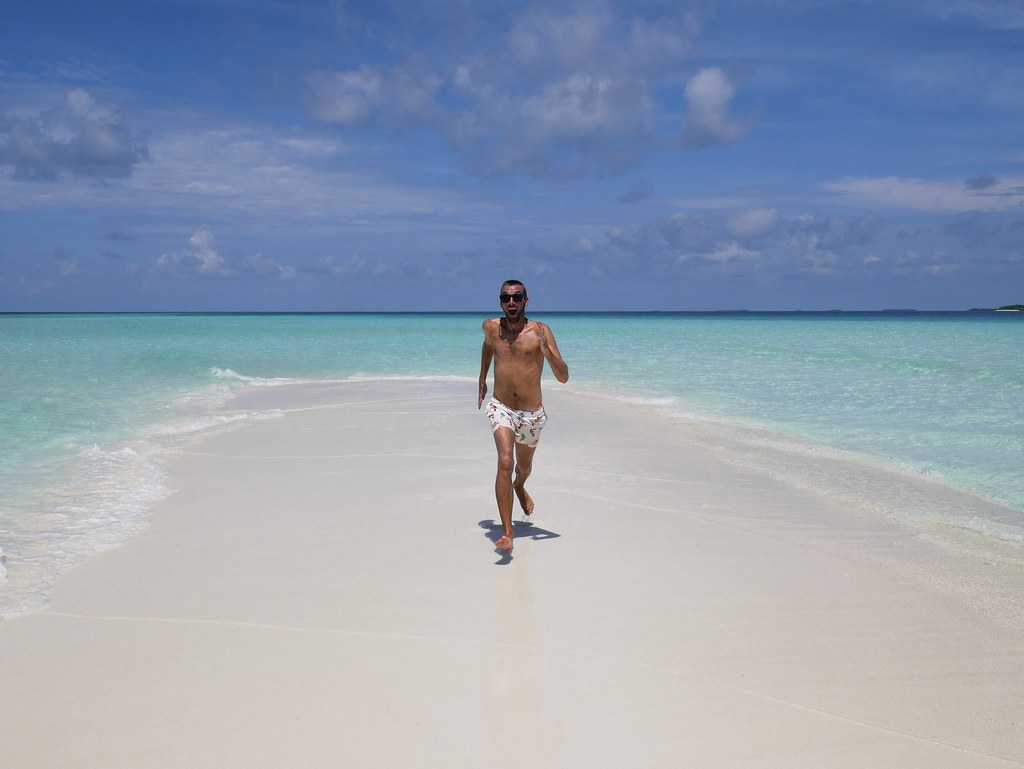 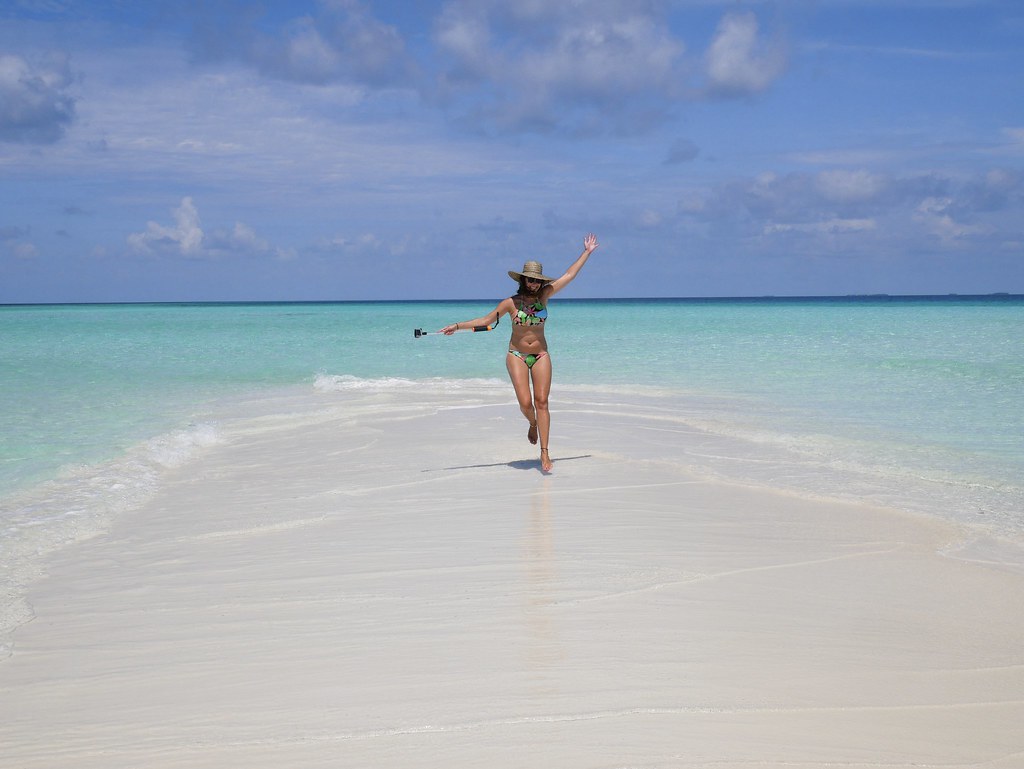 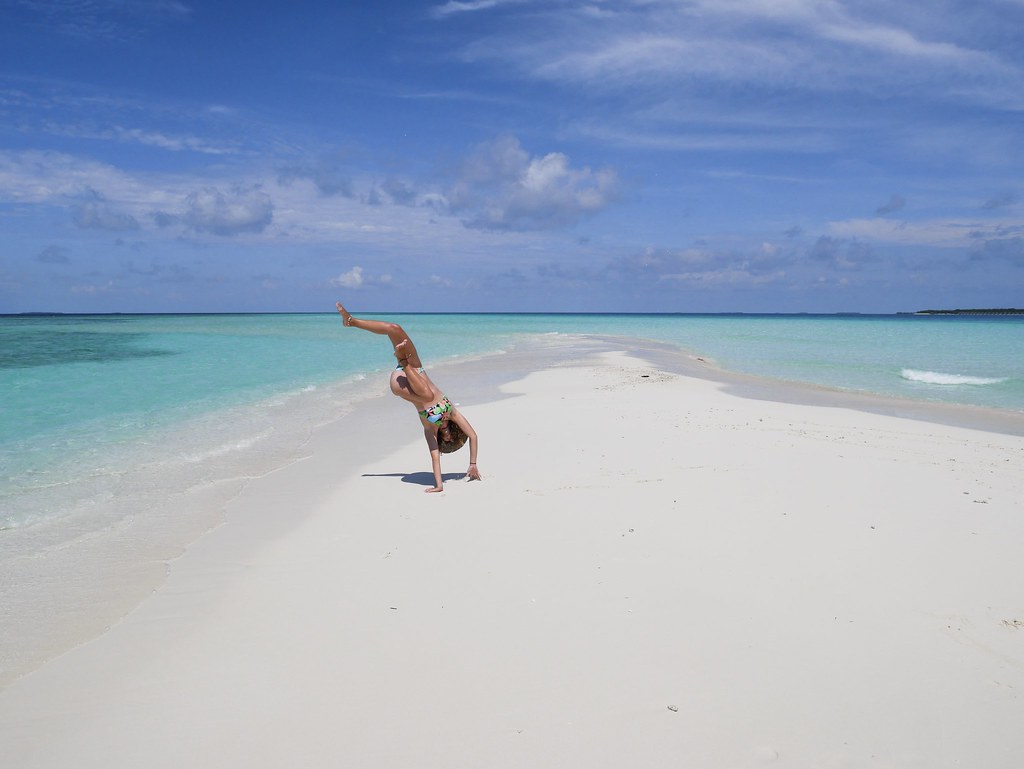 One side of the sandbank had only sand under the sea while the other was reef which we snorkelled around. It actually wasn’t a very good area as the coral was poor condition without much life so we sat under our umbrella and ate our coconut with one of the most jaw dropping views of paradise. 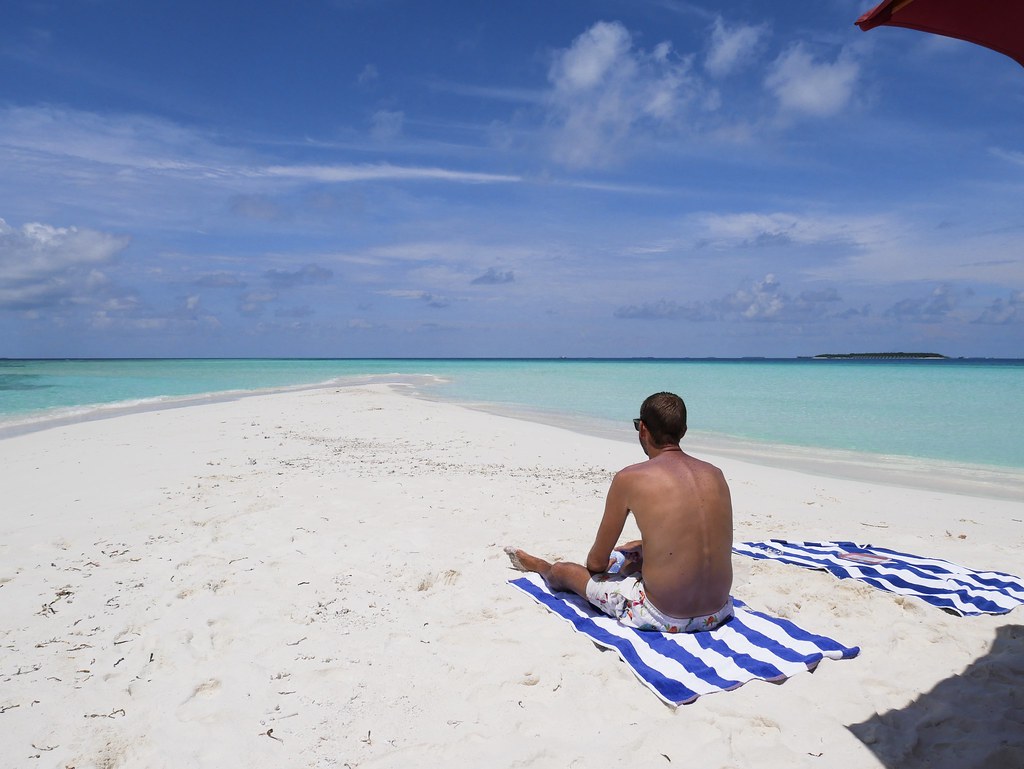 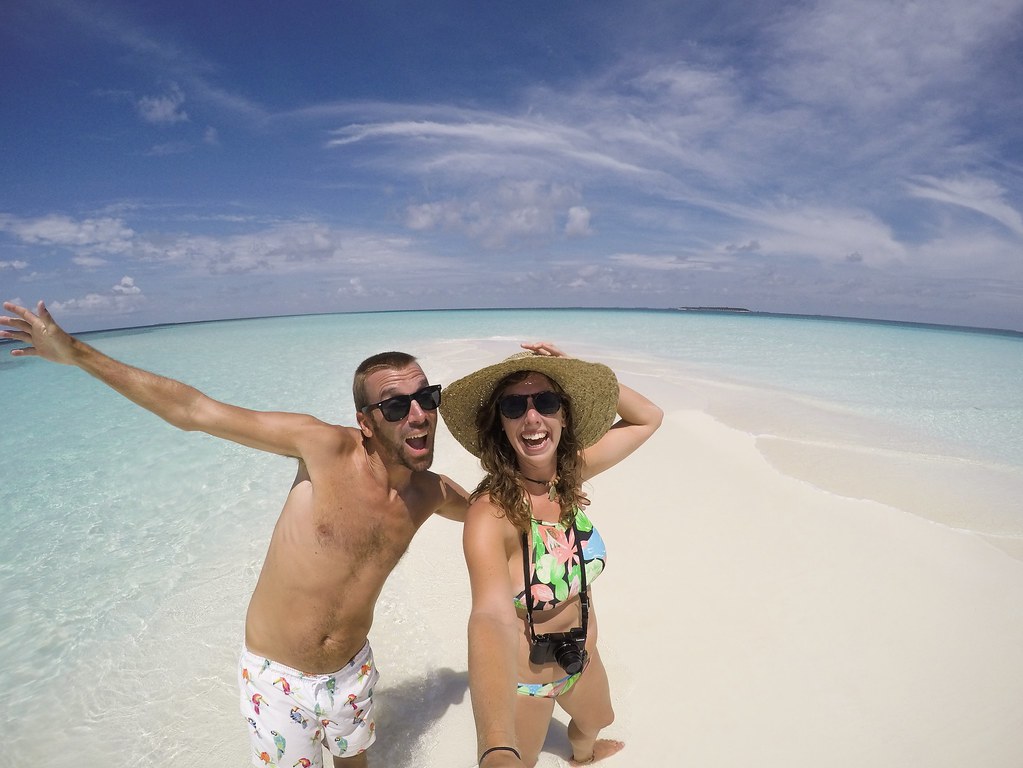 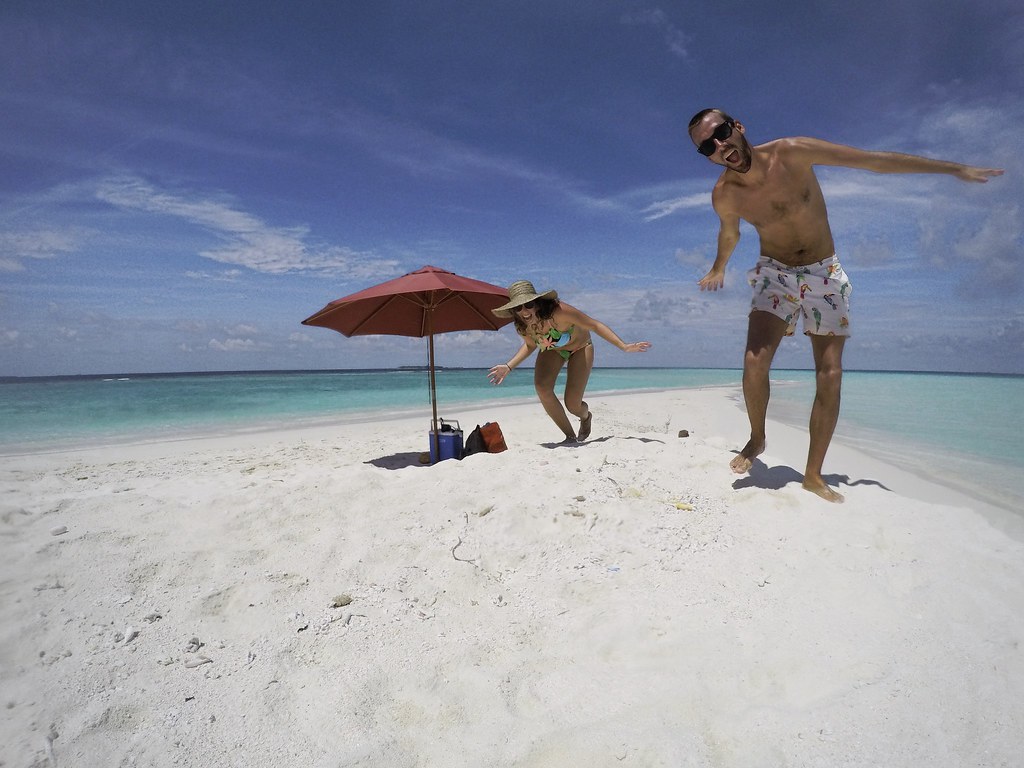 The location wasn’t completely perfect though as there was quite a bit of rubbish left on the island. There was a tatty umbrella and below it were packets of cigarettes, bottles and general rubbish that had been left there by locals, it was impossible for a wave to have pushed it so precisely under the umbrella – someone had put it there. Our host would of seen it when he set up our umbrella, so why did he go fishing instead of cleaning up the mess? But the thing is, it doesn’t matter if your staying in a fancy resort or a local island, the excursions are to the same places so even the rich people would be greeted by this rubbish, but maybe the resort staff would feel more inclined to keep the area clean seeing as the guests probably pay $100 for the same trip. It was still an incredibly beautiful spot with the most amazing water we’d ever seen, but it could have been even better if the locals cared more for the environment. 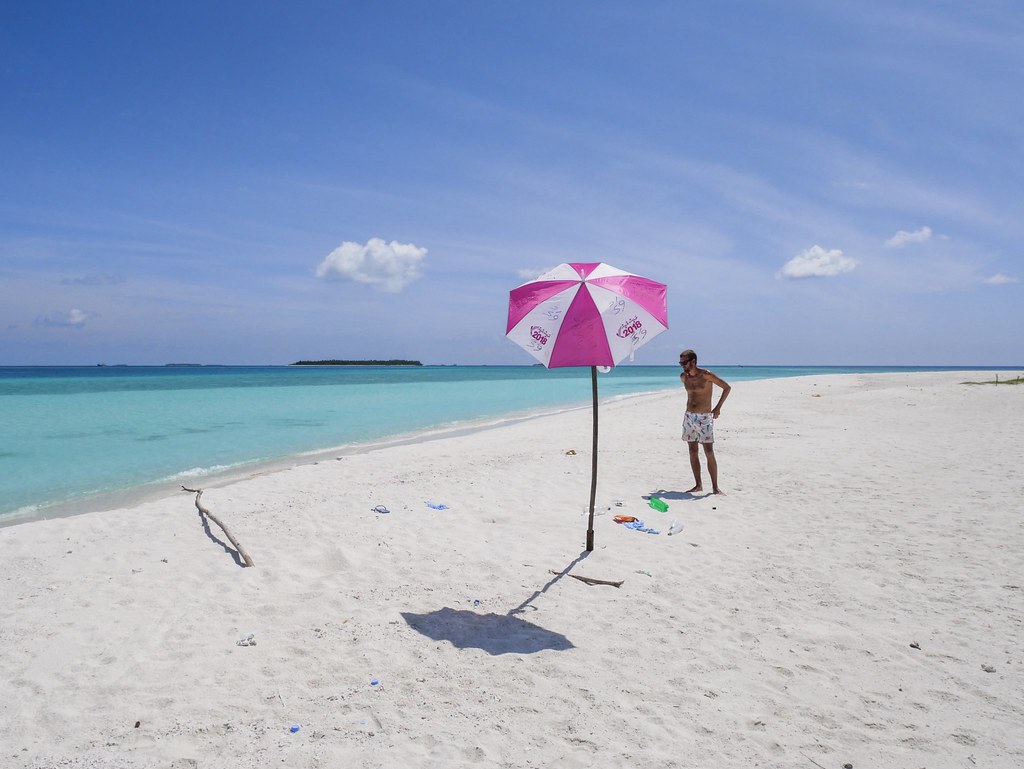 That evening we went to watch the sun go down at the far end of the beach. An idyllic looking palm tree was bent down towards the sea and looked like an easy one to climb. So of course Craig gave it a go but even at that little height his vertigo kicked in, he held onto the palm while awkwardly shuffling along the trunk. Then a loud roar came as a plane approached the island to land, Craig attempted to stand and then he lost all his balance and fell into the shallow sea. His arm was pretty badly grazed and bruised, it was still pretty funny though and Craig referred to my cartwheel fail earlier in the day and said “we’re not young anymore Lauren” and we laughed as we shuffled our sore, bruised bodies back to our guesthouse. 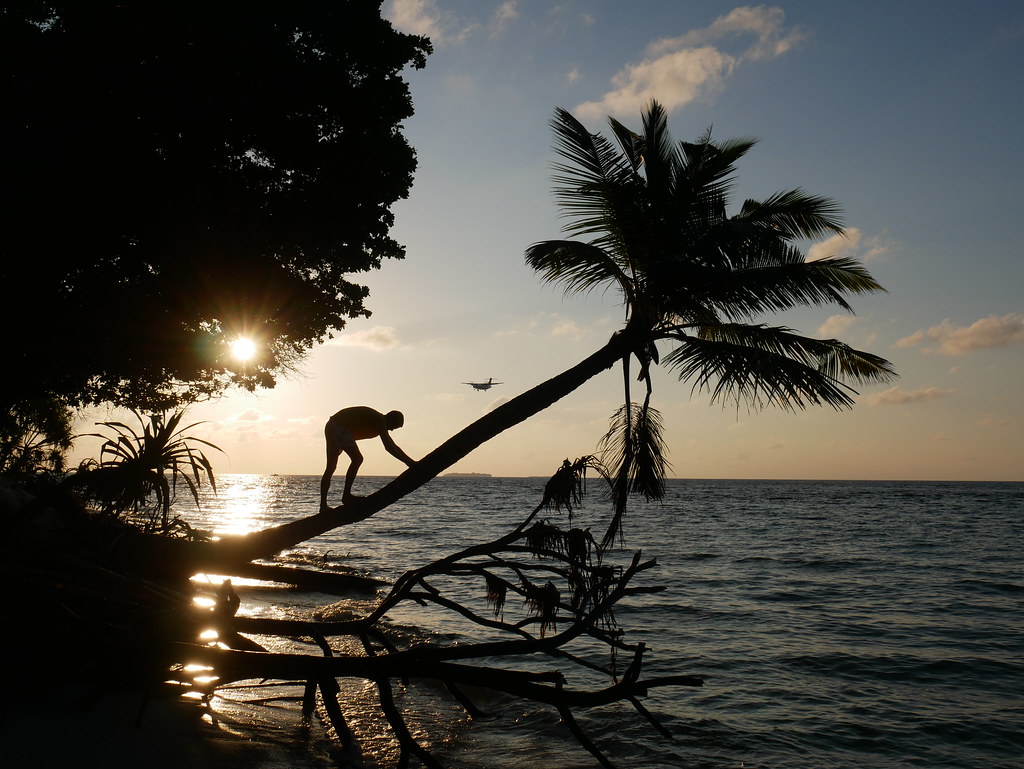 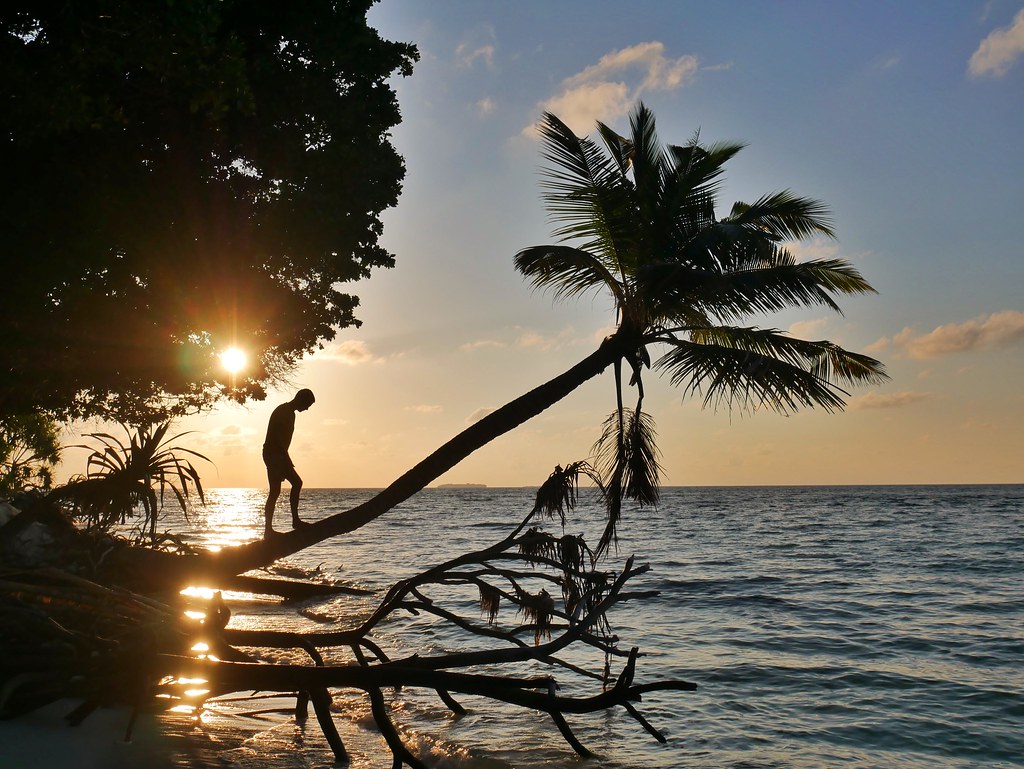