Some of the resort islands in the Maldives allow tourists to visit on day trips which is the perfect compromise for people like us that choose to spend our money more wisely (sorry fancy resorts but we could buy a campervan for the price of one night in a luxury villa!). The deals vary, some resorts just charge an entry fee while others will also require payment for transport to the island or they might charge a higher price but include food and drinks for the day. We found an absolute gem of a resort to visit which was a 15 minute boat ride from us in Baa Atoll. They only charged $30 entry and transport was free seeing as we were based on Dharavandhoo with the domestic airport, they just coordinated our visit with taking guests to and from the airport by speedboat. Hooray!

We felt pretty out of place on the boat amongst the wealthy people, so I popped my wicker hat on and winked at Craig….no one would know that my hat only cost $3 from Sri Lanka, heck, we could be whoever we wanted for the day! I gazed out at the sea, wondering what my spiel would be if someone struck up conversation with us, “This is my fiancé Craig, he’s an actor…you must excuse his attire – he likes to dress down in tatty clothes so people don’t recognise him. We would of caught our private jet here but we like to mingle with civilians once in a while” and then Craig looked at me and asked what I was smirking about “oh nothing…”. We were still socially awkward when we arrived though, the staff welcomed us with their palms together bowing down and we didn’t know where to look. We were all given ice cold, scented flannels and for once I refrained from smearing it all over my face, not so much out of politeness but because I didn’t want to waste the suncream I’d put on that morning. Then we were handed a fancy soft drink with ice cubes, foliage and a natural straw…we both looked at each other and knew exactly what the other person was thinking ‘do we need to pay for it? Is it included in the price? Do they know we’re just day visitors?’. We decided if they didn’t know we were day visitors then that wasn’t our problem so we downed the drinks before they could change their minds. Couples were then escorted away by their butlers (yes, butlers…is this even real life?) and led onto golf carts. I was just about to subtly whisper to a staff member that we were just day visitors and needed to go to reception to pay but then we were told to follow a chap and were put on the back of a golf cart with a family upfront. 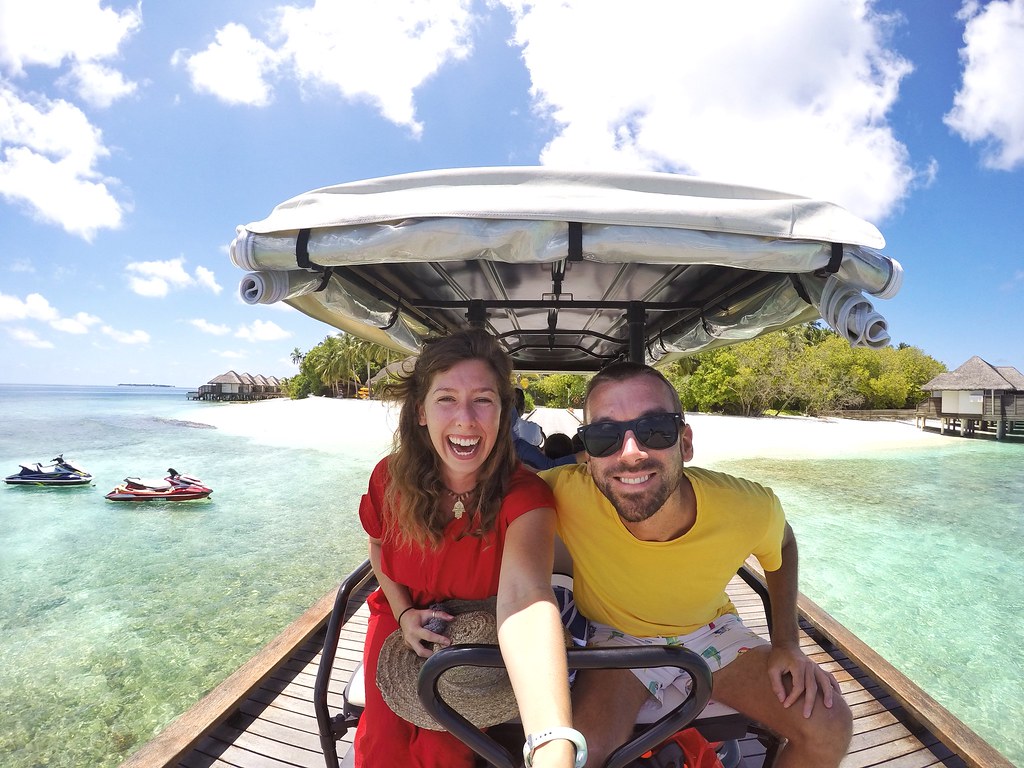 So, there we were giggling like a couple of kids while getting a tour around a luxury island. We meandered our way through neat paths in the beautiful dense jungle and were shown where the restaurants, spa were etc, most of which needed to be pre booked. Every villa had bikes included so that’s how all the tourists got around which gave the place a super laid back vibe. When we passed a family cycling nearby, our driver shouted out “happy birthday Cynthia!” and then he said to us “it’s Cynthia’s 6th birthday today” so it was pretty amazing to see how on the ball the staff were. After our unexpected island tour we were dropped off at reception to pay $30 per person including taxes. The receptionist asked us how Dharavandhoo was and then we realised the place ran like clockwork, the staff were impeccable at their jobs and they all knew that we were just day visitors, but they treated us the same as the people staying overnight. It kinda threw us though, we weren’t used to being treated like that and after we paid up another staff member came in to collect us on a different golf cart “so where would you like to go first, the beach or the pool?” Suddenly I felt like Kevin McCallister in Home Alone when he was staying at the Plaza Hotel and living the dream on his dads credit card. 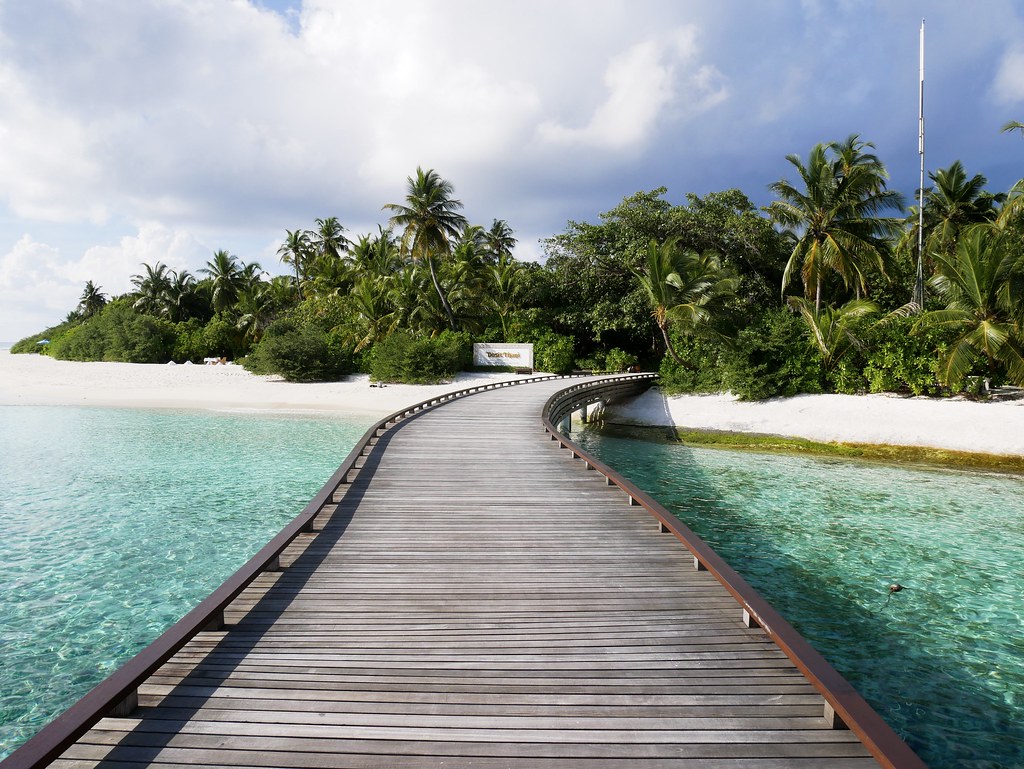 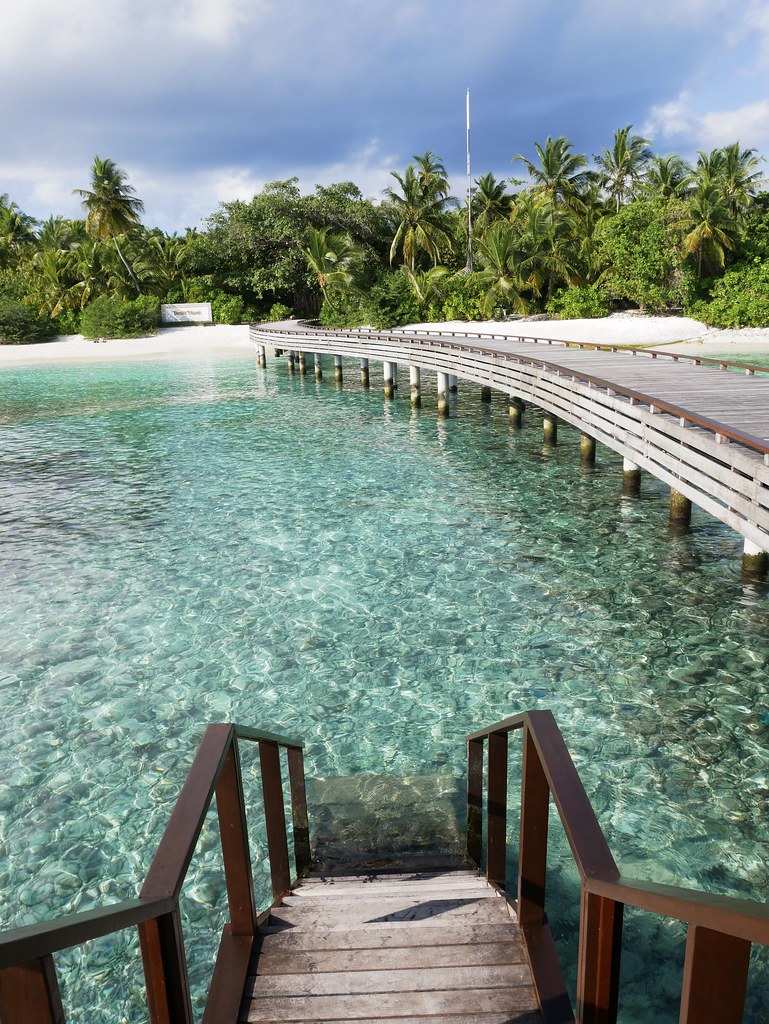 We opted for the pool and it was actually the first infinity pool we’ve ever swam in. It was gorgeous and dropped off the edge into the endless sea. There was a very popular restaurant near the pool and it was full of guests eating lunch, yet the pool itself, the loungers and the pool bar were empty, we had the place to ourselves! I guess because most villas have private pools they don’t feel the need to swim in the public one. We had a little swim and decided we should really see the beaches and go snorkelling. When we got back to our loungers a tray with fresh flannels had been placed on the table for us, along with a mini taster of their homemade lemonade, two apples and a menu. I curiously browsed at the menu and quickly closed it back up. We had a feeling it would be over our price range so I had casually popped some roti in my dress pocket at breakfast just in case. I was glad I did as the meals were $25 to $35, in fact the cheapest option was soup and even that was $15! The barman swooped by and we politely said we were going snorkelling and maybe we would pop back later, and yet he insisted we had the taster and the apples, geez, they were such nice staff. 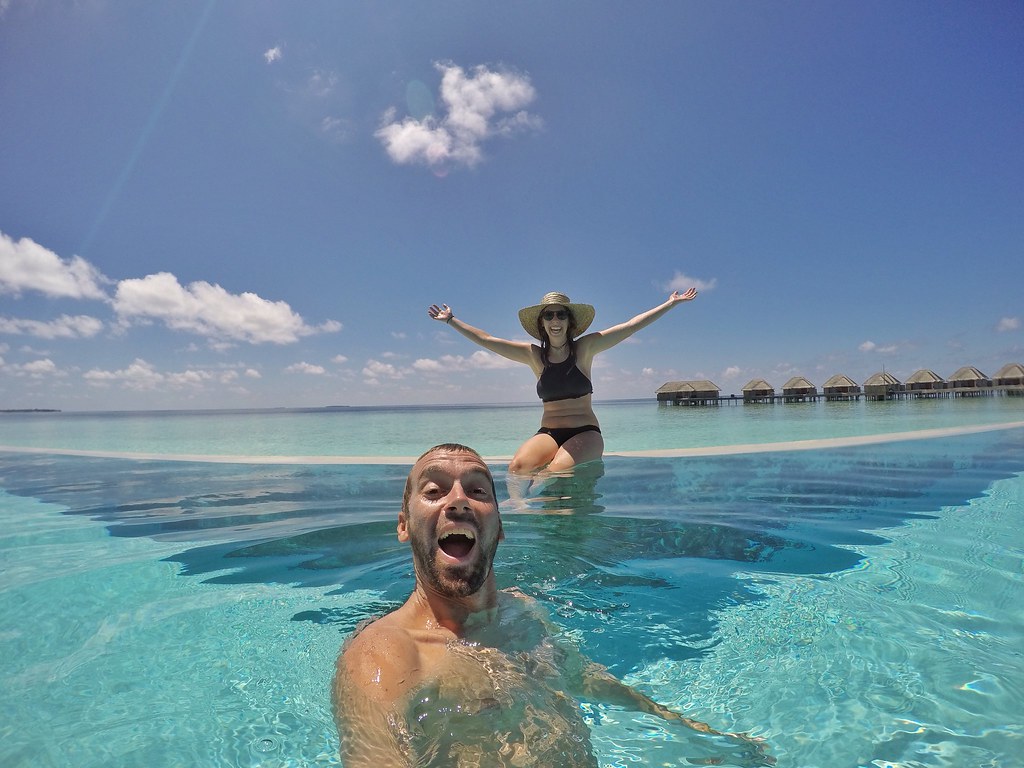 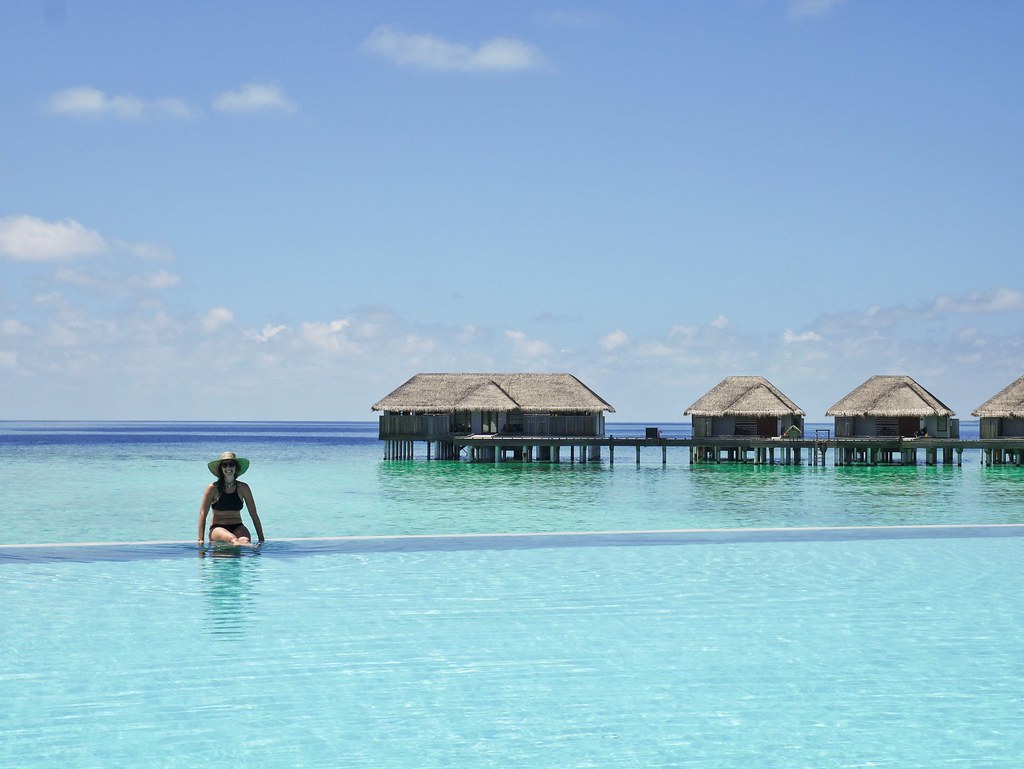 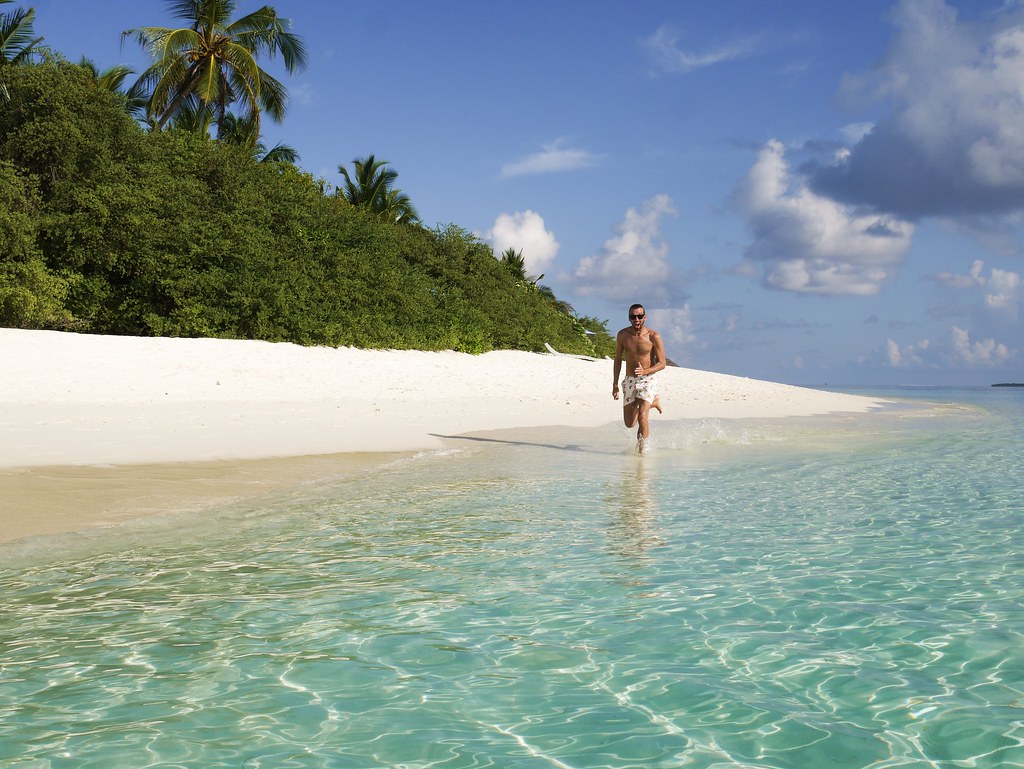 Near the pool was a curved, wooden boardwalk built above the glistening sea. It led to the $1000 a night water villas, built on stilts above the sea. It was the Maldives in a nutshell – luxurious paradise. A worker cycled past us on the boardwalk and I wondered how many people wobbled off their bikes and into the sea, maybe it was a good job I couldn’t afford to stay there as I’m sure that would happen to me. 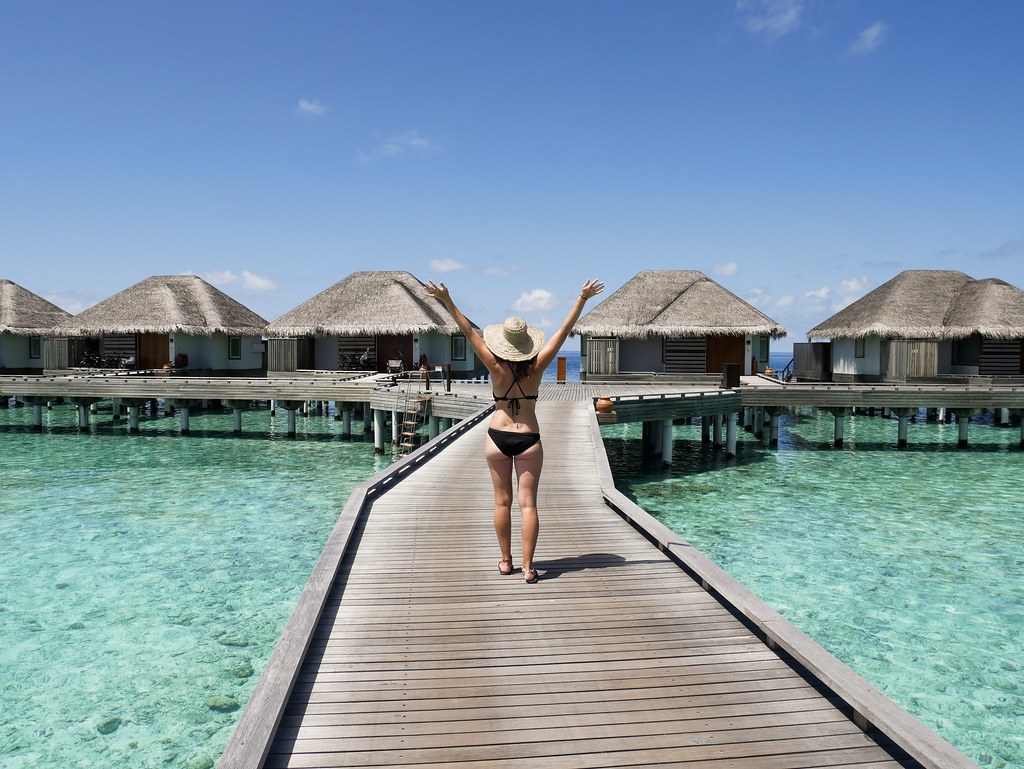 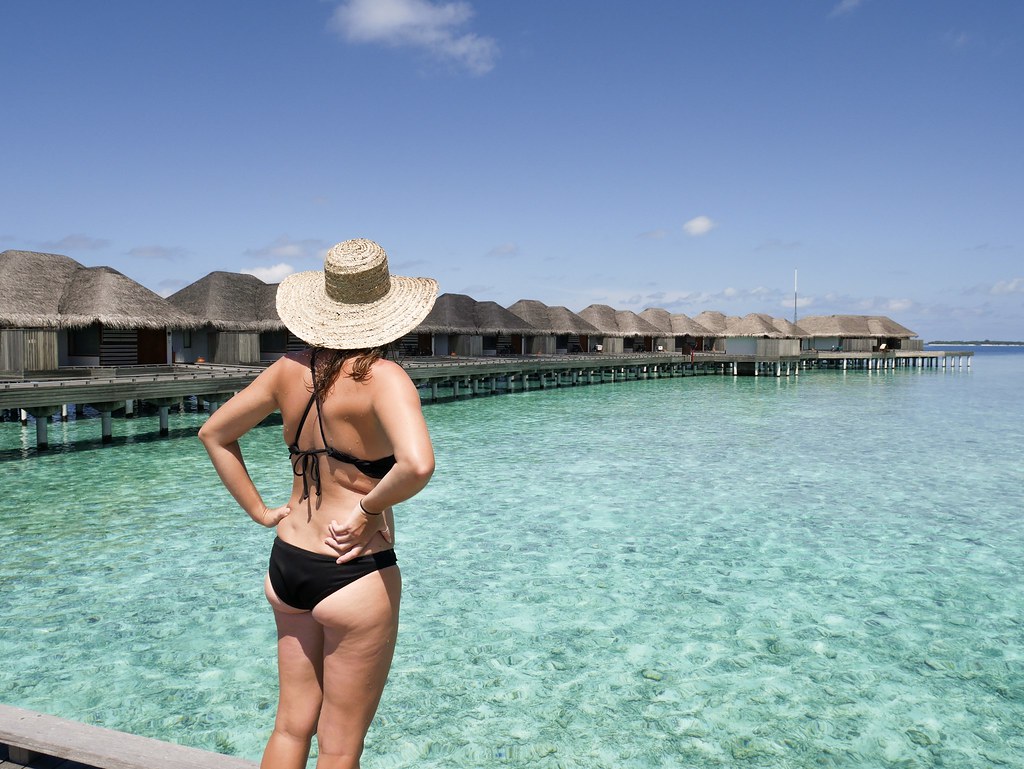 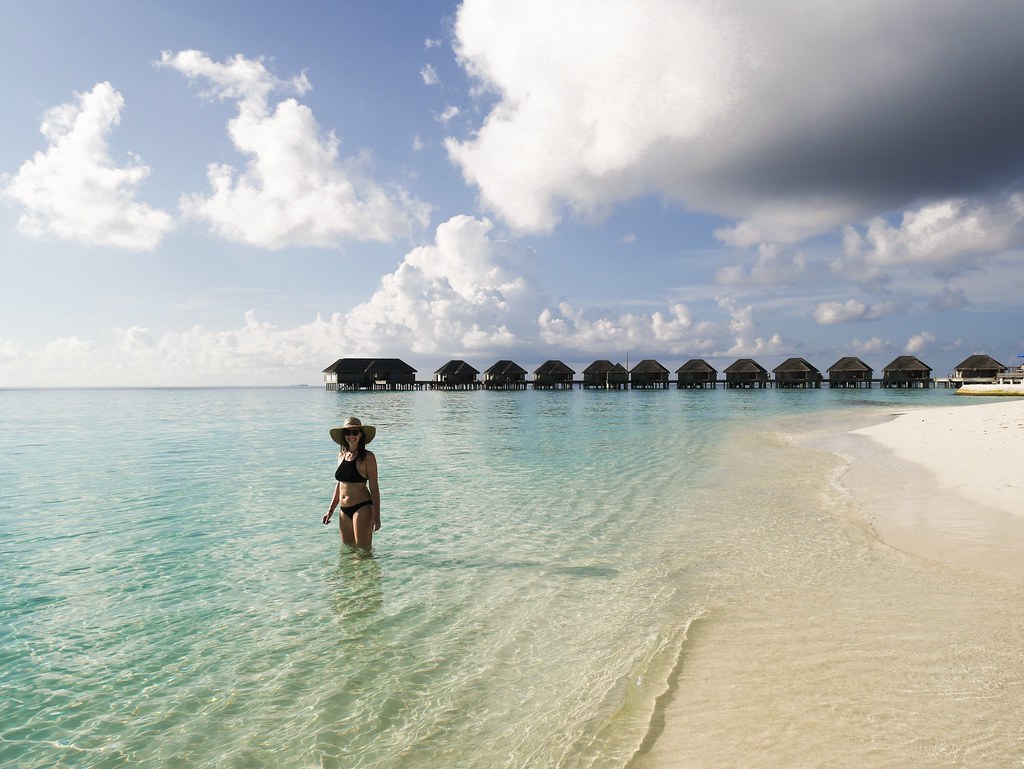 We spent a few hours snorkelling around the island, mostly drifting along with the current which was nice and relaxing. The reef was actually very similar to Dharavandhoo with the drop-off about 20m from the shore, the quality of the reef wasn’t much better but there were definitely more fish around and I guess that’s one of the benefits of a resort island – the waters around it were protected from fishing. So we saw some huge fish, like the sort of giant ones that people fish for fun and struggle to hold up for a photo afterwards, and it was nice to see them swimming freely. I also spotted a reef shark but my excitement in waving craig over only scared the chap off. We swam alongside the lavish water bungalows where the guests could jump off their decking directly into the turquoise sea, it was a pretty idyllic location to stay. 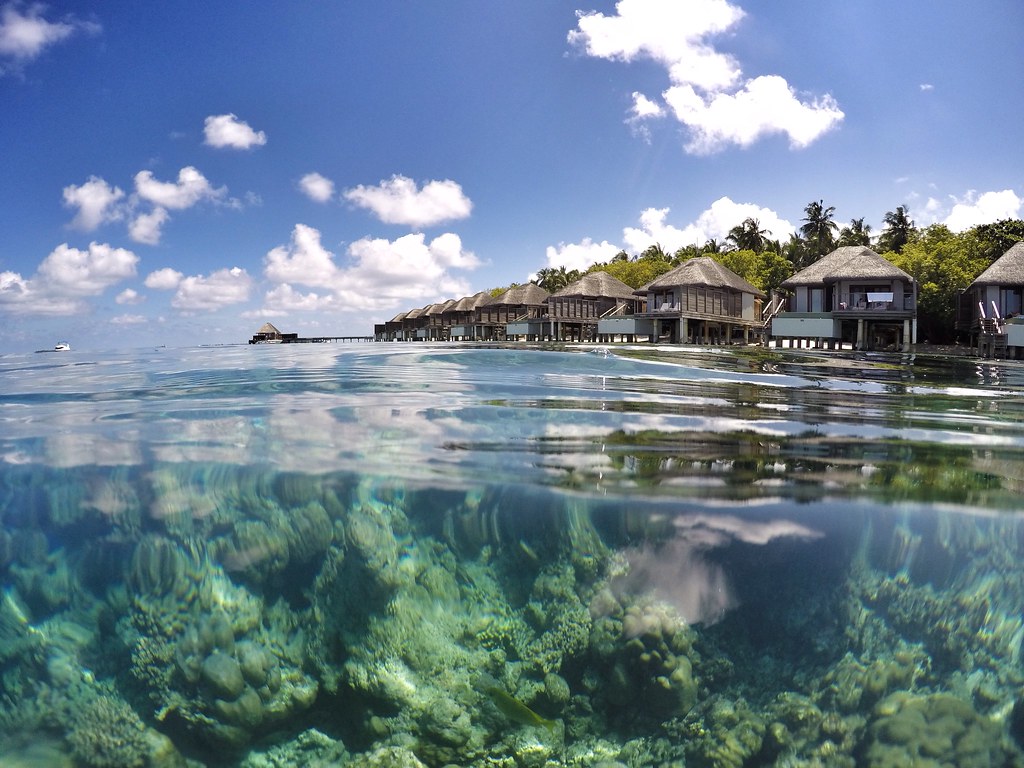 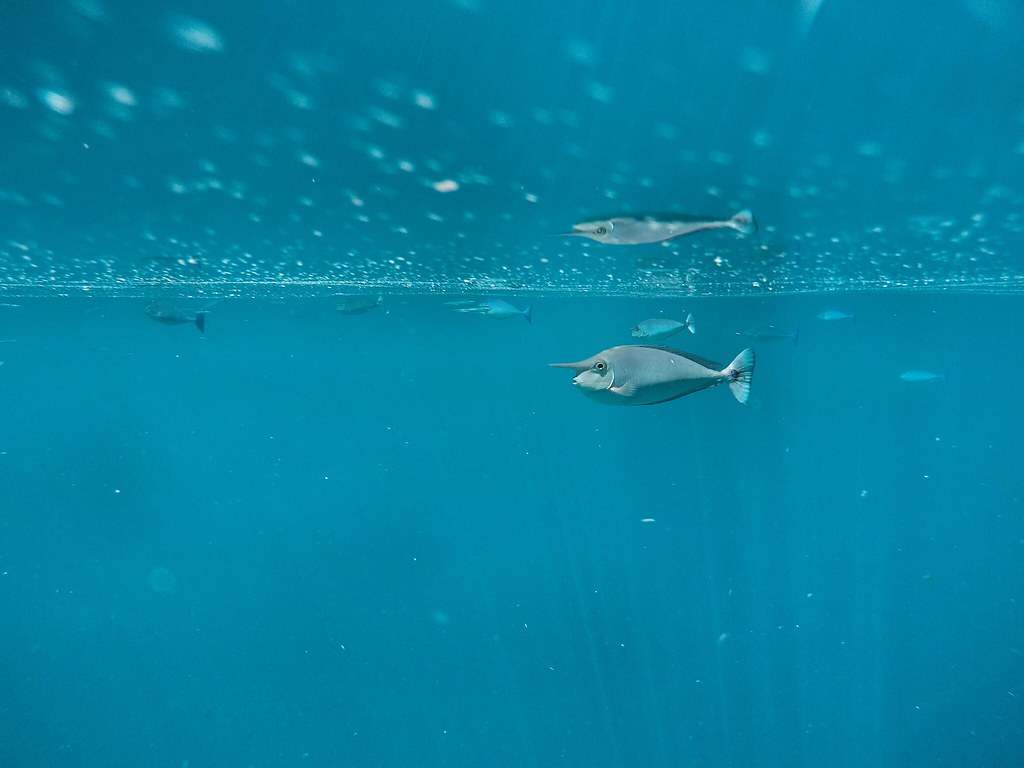 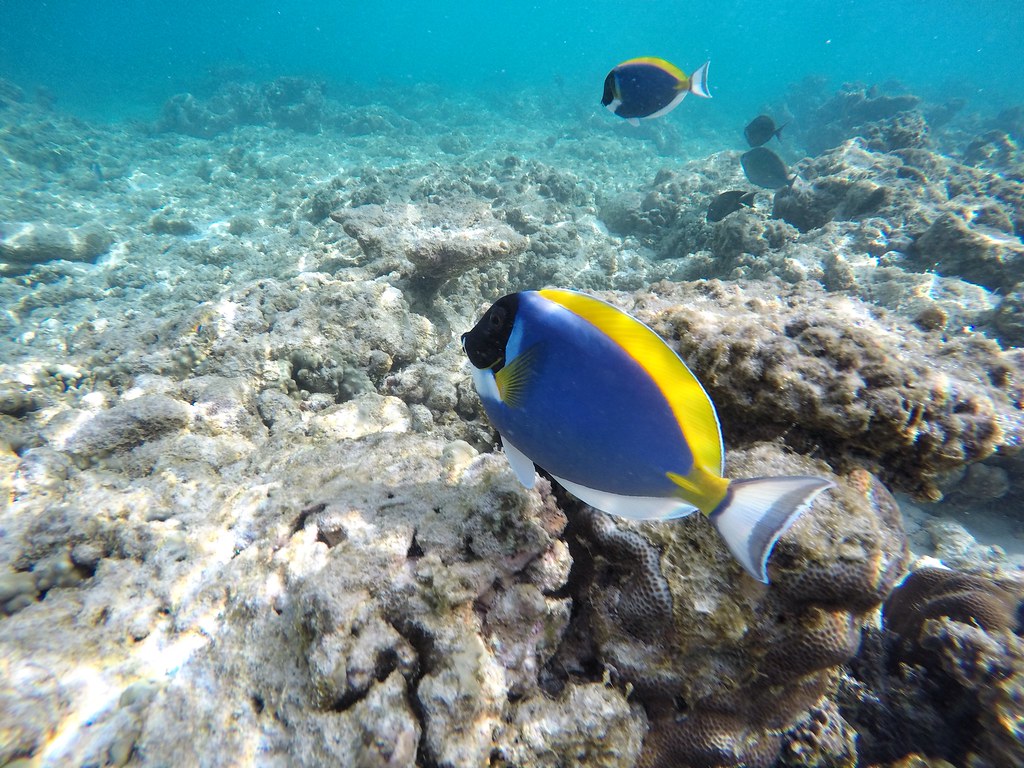 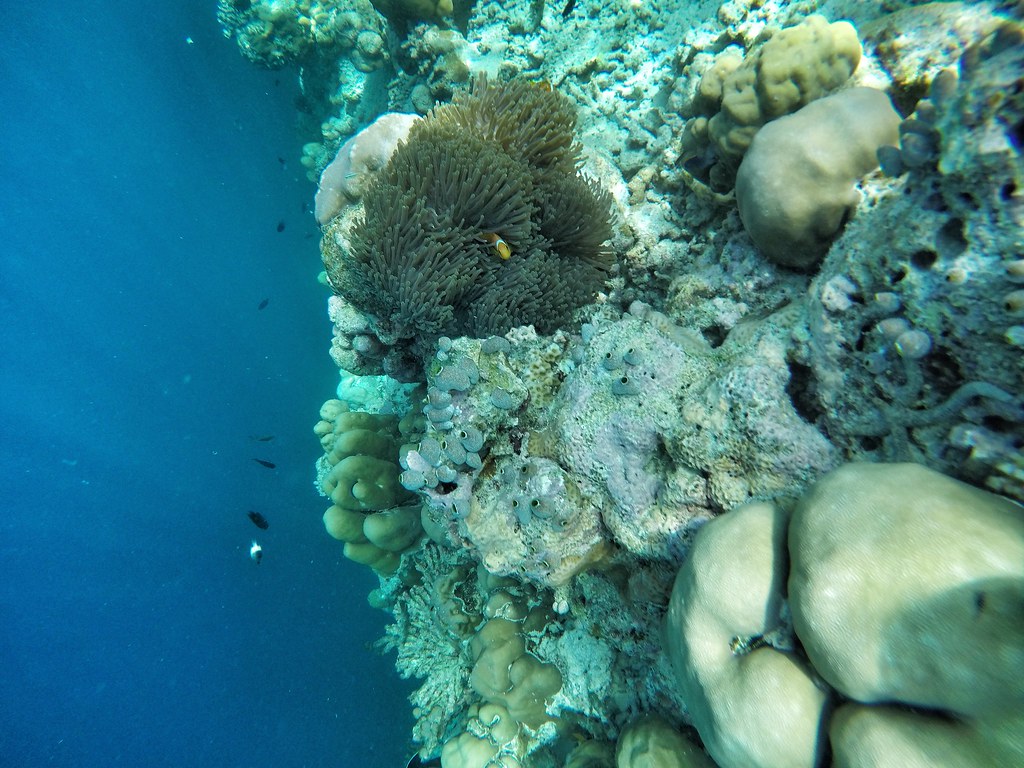 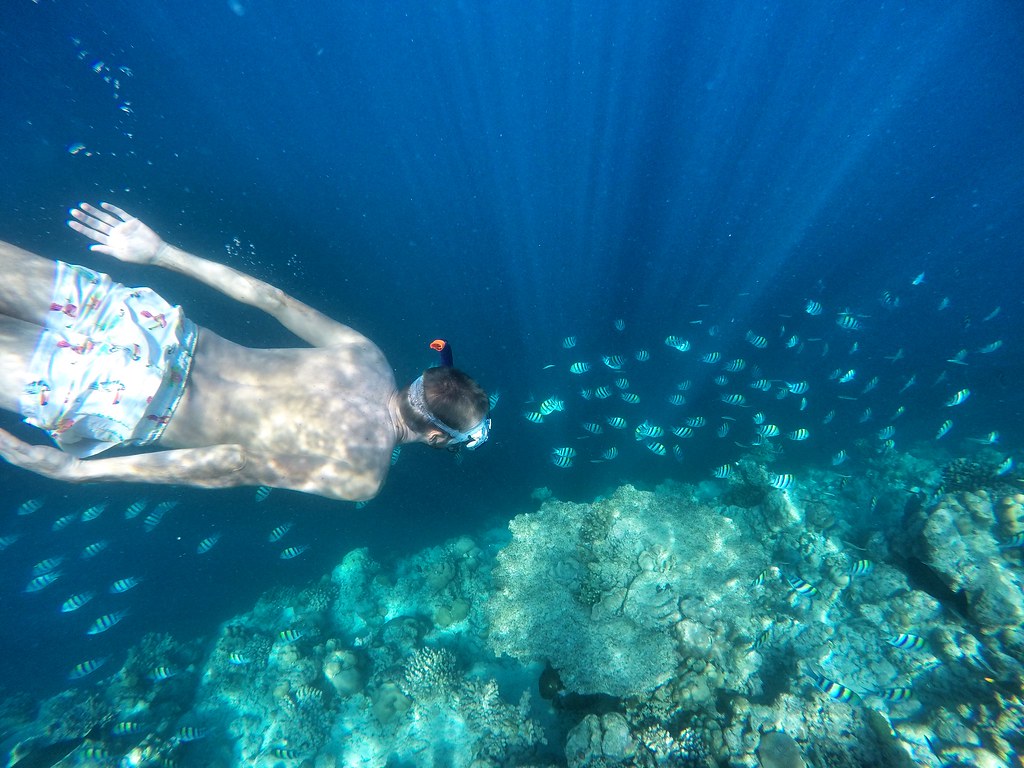 The rest of the day we basked in the sun on an empty white sand beach, the sea had a big sandy area without reef so the water looked incredible and stingrays effortlessly glided past us. We watched the sun go down and create a magical ray of light through the sky, and then we had to rush off for the speedboat back to reality. We only walked a couple of minutes before a worker pulled up in a golf cart and asked where we were heading, he kindly offered us a ride to the jetty and we bid farewell to the beautiful island while the staff once again put their palms together, bowed and then they waved until we couldn’t see them anymore. 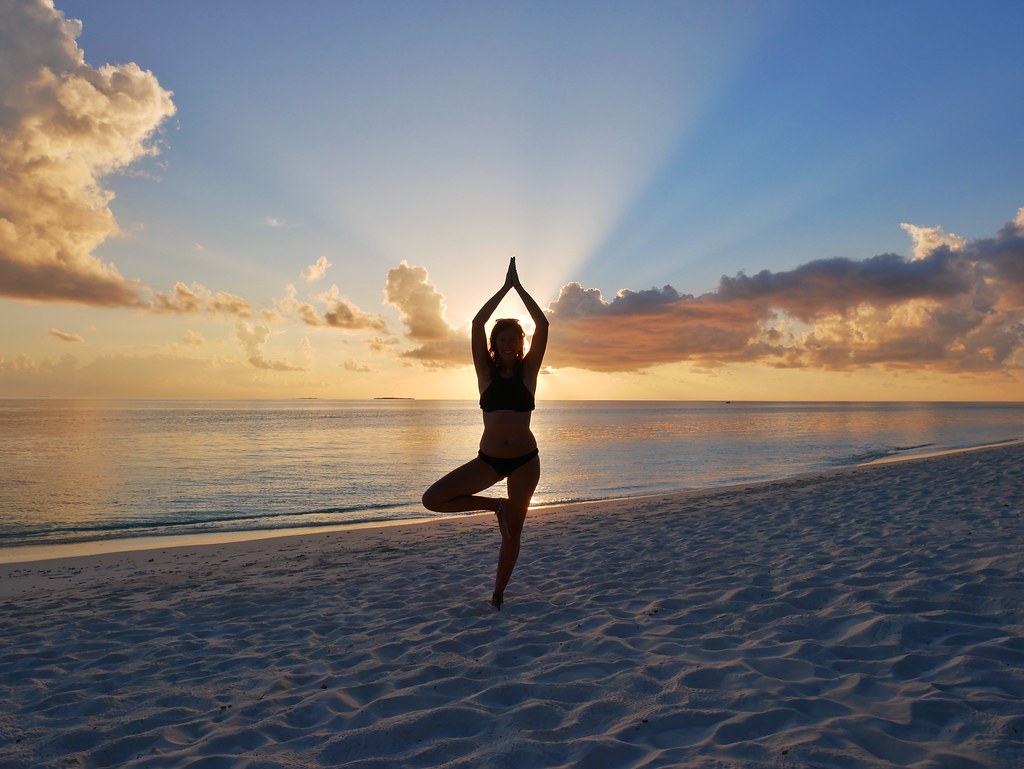