The Maldives has always been one of those dream locations, an unreachable goal that only winning the lottery could help us get to. But things have changed in the past few years and now there are hundreds of affordable guesthouses to stay at on the local islands. There are around 1200 islands in the Maldives, all formed by extinct sea volcanoes which have created incredible circular lagoons fringed by coral reef. About 200 islands are inhabited and 80 are resort islands. So our first challenge was picking which local islands to visit and we ended up choosing Dharavandhoo Island on Baa Atoll for our first week and then further south in Ari Atoll for our final ten days. I’ll compile a blog with all the prices and budget tips at the end of our stay, but until then here’s our experience in paradise… 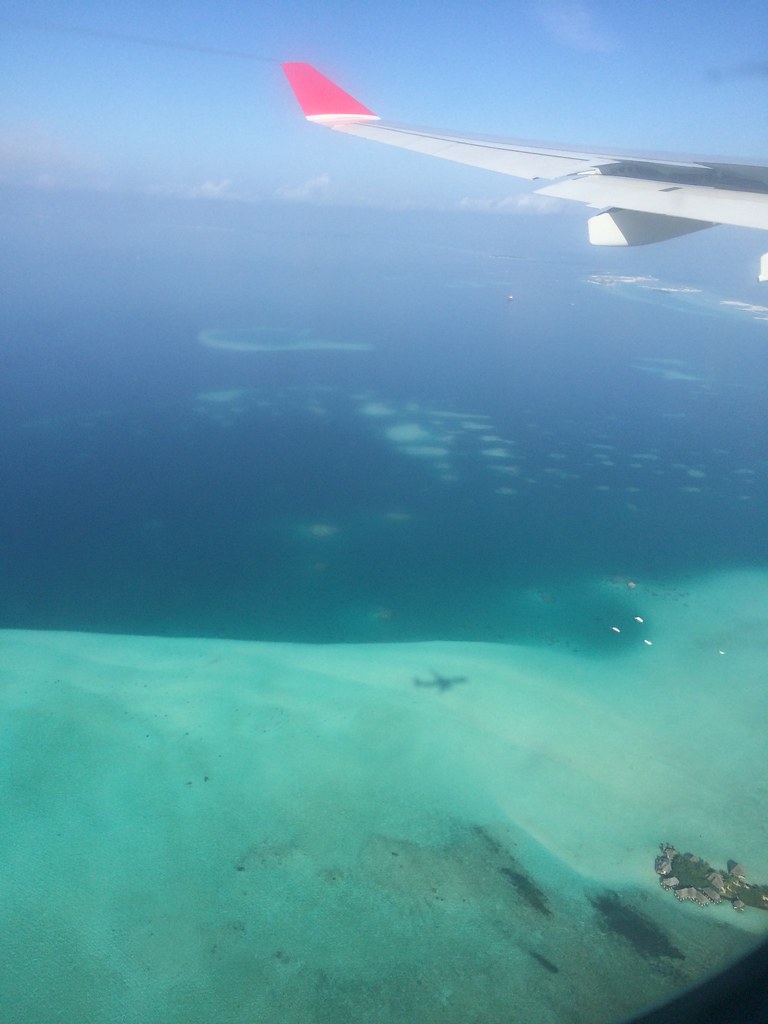 We were so happy to have window seats as we flew from Sri Lanka to the Maldives and I could barely read a page of my book before peering out the window to check for tropical islands beneath me. They only appeared in the final 10 minutes of the flight but my god they looked just like they did in the brochures. We were squealing with excitement. The weather was perfect with clear blue skies and already a scorching 28 degrees at 8am when we landed. We had to get from Hulhumalé Island where the airport was based, across to the southern section of Malé to catch our speedboat and luckily for us a free bus did this route every hour. Malé is an ugly place, it’s a small island packed with high rise buildings and it’s considered to be one of the most densely populated islands in the world. So of course we wanted to leave as soon as possible and with a few hours wait at a cheap burger joint we were led onto our speedboat at 1pm. It was a really swanky boat with about 30 people onboard, all locals except for us. There was a bit of rubbish in the harbour but already the sea looked clear and turquoise and we hadn’t even left Malé. The speedboat was $35 per person and it took just over two hours with a brief stop at another island to change boats. We were welcomed onto Dharavandhoo Island by our guesthouse host, Ahmed, who led us into a taxi and drove us approximately 200m. It’s a distance we would always walk with our backpacks so we felt kind of embarrassed to be chauffeured such a short way but the service was free and very welcome in the heat. 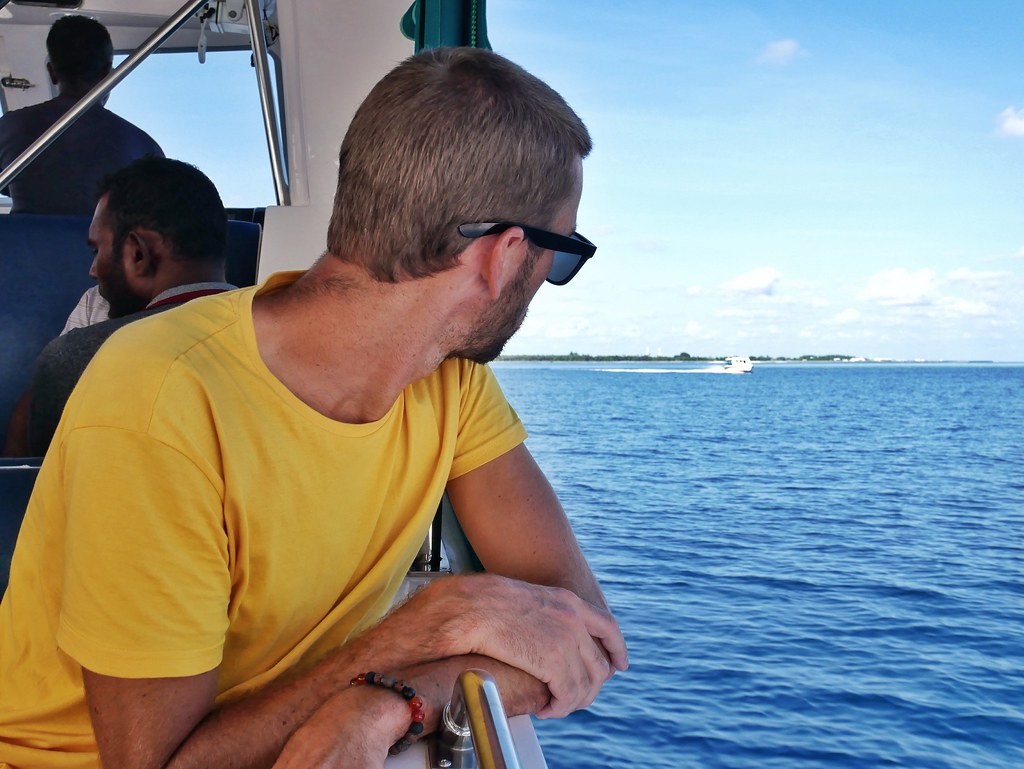 The guesthouse was a small affair with only four ensuite rooms and as it was off season we were the only guests. A double room for cost $50 for two people including a huge breakfast and all taxes (but we paid extra for meals there). A coconut with a fancy flower poked into it was awaiting us in the outside dining area where we sat with our feet on a sandy floor and tropical plants all around us. As soon as we’d settled in, Hussain, a sweet worker from Bangladesh walked us through the quiet village to show us the way to bikini beach (if your visiting the local islands you need to abide by the laws and customs, and as the Maldivian’s are Muslim you must dress appropriately around the islands and bikinis are only allowed on the designated bikini beach). Dharavandhoo is a long, thin island and it even has a domestic airport with flights throughout the day. I was preparing myself to be disappointed by the beach, we weren’t on a protected resort island so I had low expectations just in case it wasn’t the typical brochure photo of a Maldivian beach. We followed the sandy track past three other guesthouses and then we were shown the beach – it was perfect, white sand, turquoise water and no one else there. How could we have a place so idyllic to ourselves? There was some broken corals and natural debris washed up from the tide but it just made the place feel more natural, like a proper desert-Island. It was late in the afternoon so we didn’t have long before the sun set but it was enough time for a well needed swim in the calm sea. We could see some other tourists further down the beach by their guesthouse but that was all, so it was a lovely feeling everyday knowing there wouldn’t be sun-bed wars. 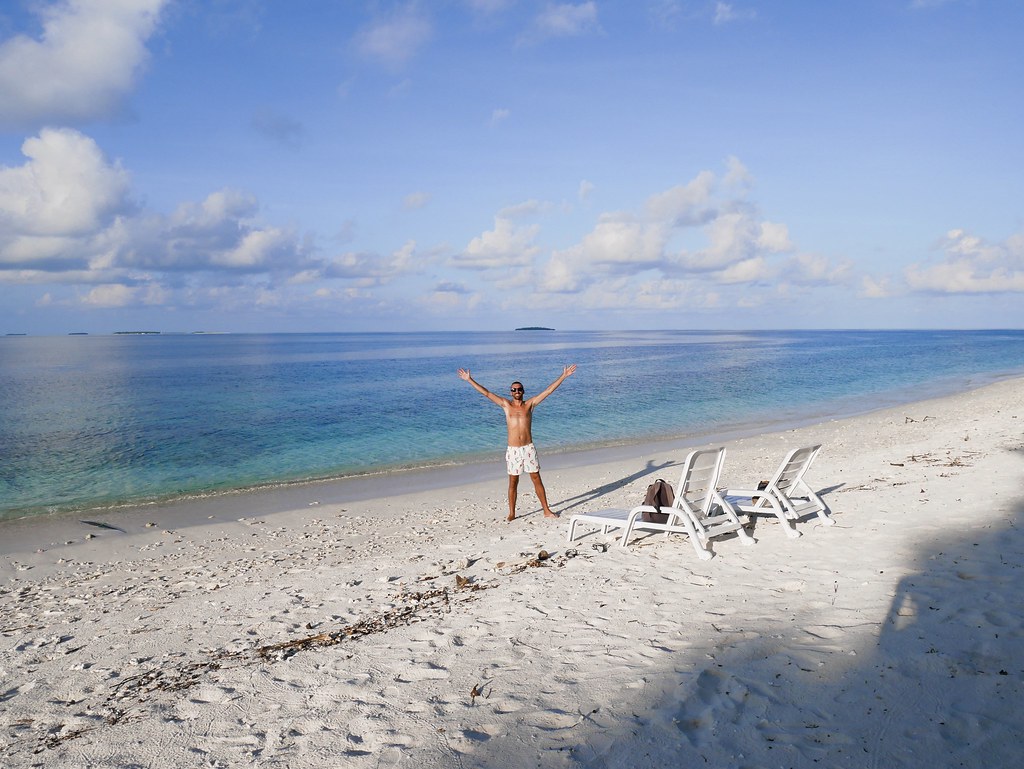 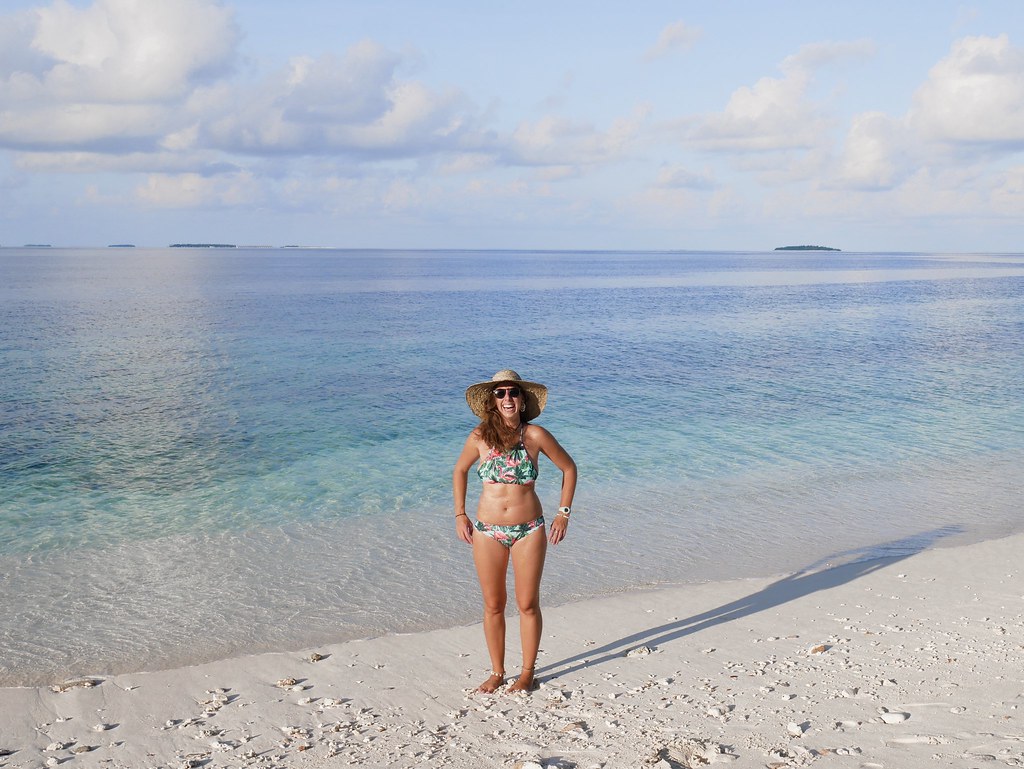 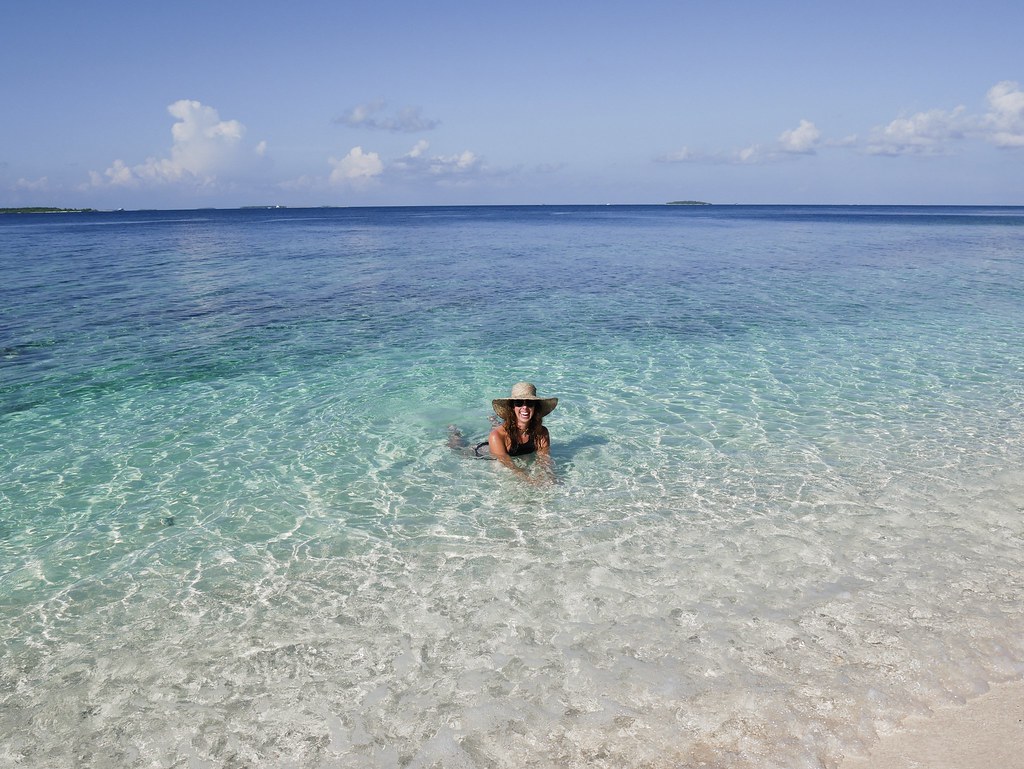 That evening we were treated to a stunning sunset, it was a fabulous pink colour and there was an unusual pastel coloured hue everywhere, the sea was a beautiful milky blue colour and the sand soaked up the pinkness of the sky…it was the most perfect palette of colours. We headed back to our guesthouse with huge grins on our faces, we could already tell this local island was paradise. The call of prayer played out the speakers on our walk back and it was unlike the others we’ve heard around the world, it was more like a gentle song. We’d opted for full board at our guesthouse, something we’ve never done before but it was actually very nice not having to wander around searching for a place to eat, plus we were fed extremely well, even with my vegetarian diet. 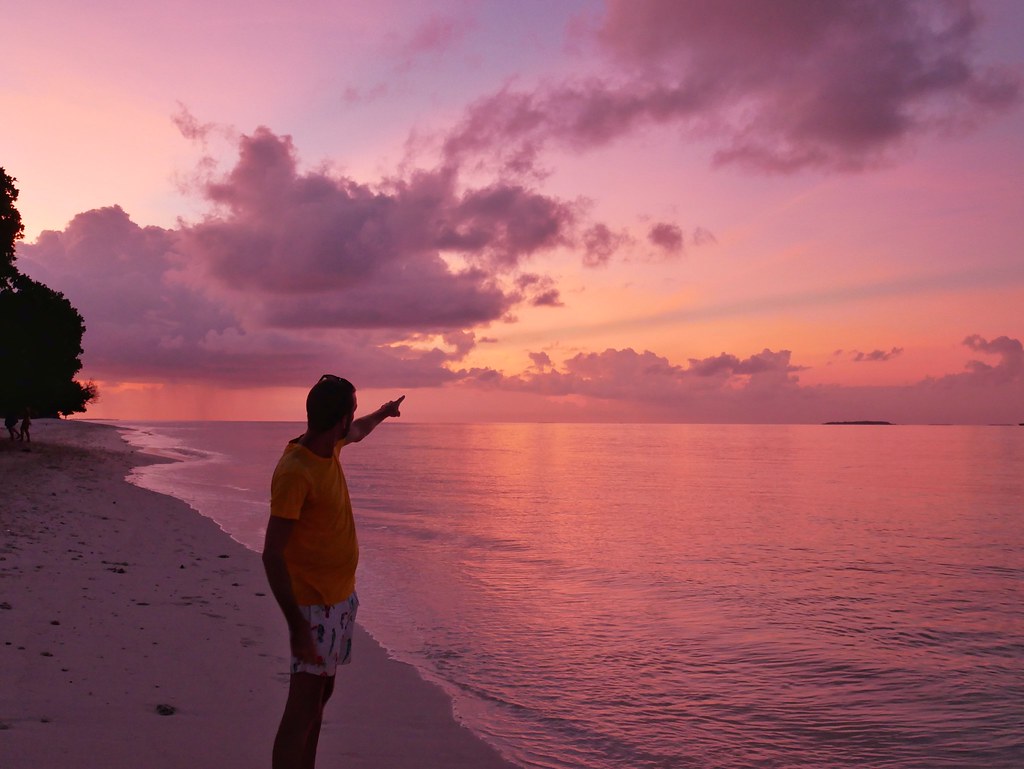 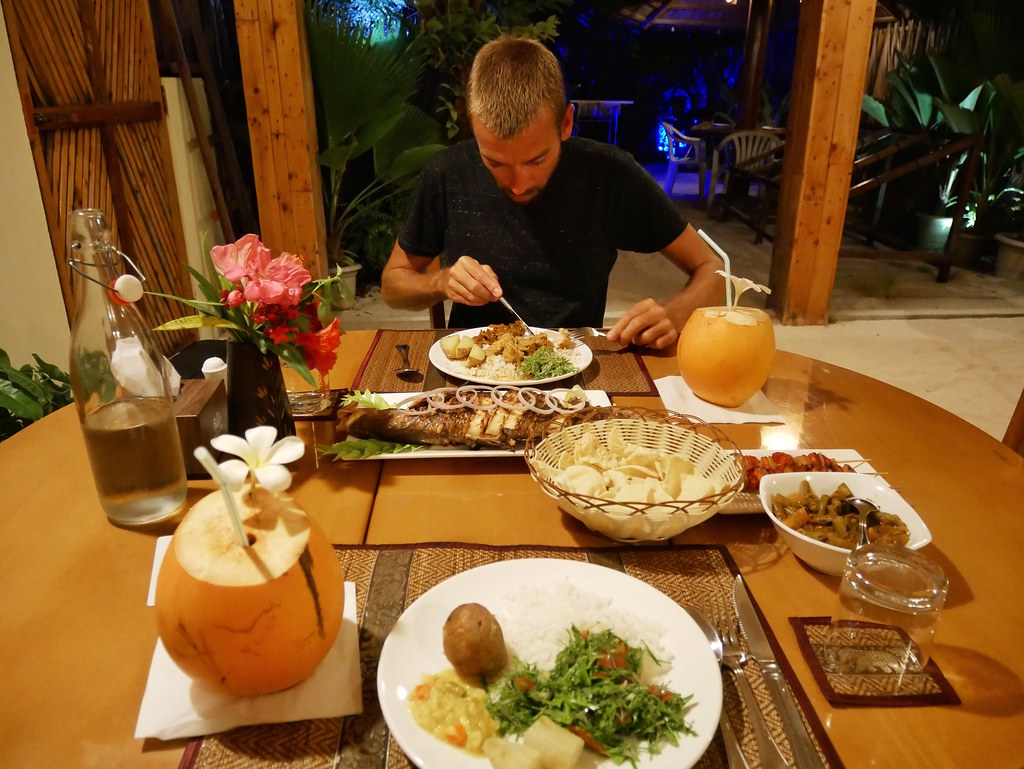 The next morning we were excited to head back to the beach with the sun high in the sky. But first we had a traditional Maldivian breakfast with roti and coconut, onion and tuna filling (minus the fish for me), plus eggs, French toast and toast….in hindsight we were fed so well that we only needed half board but at least we ate like kings for a week. The beach stretched for about 500m, starting with the local beach where the islanders swam fully clothed and enjoyed BBQs under the shady palms. Much to our delight the bikini beach was just as quiet as the day before so we plonked two sun beds just a couple meters from the sea and headed in with our snorkels. There was only a meter or two of sandy area in the sea before the reef started and a further 10m out was the drop-off. The sea around the Maldives is very shallow, only 30m or so but it certainly feels deep when you swim over it. We’ve come to terms with the fact that most of the worlds coral is bleached or dead and sadly even the Maldives stood true to that. There was lots of reef but no colour, on the plus side the fish still seemed pretty stoked to hang out amongst it and we saw a huge variety of tropical fish, some we’d never seen before, others we were happy to see again. The underwater world must be where Mother Nature had her most fun creating as the fish looked like pieces of art, with neat black polkadots against mustard yellow bodies and stripes curved around fish like icing on a biscuit. We could hear the loud crunching underwater as they nibbled on coral and funny brown jets of poo that they quickly tried to swim away from. We spotted a huge octopus too and a beautiful black lion-fish which had elaborate sort of wings surrounding its body. 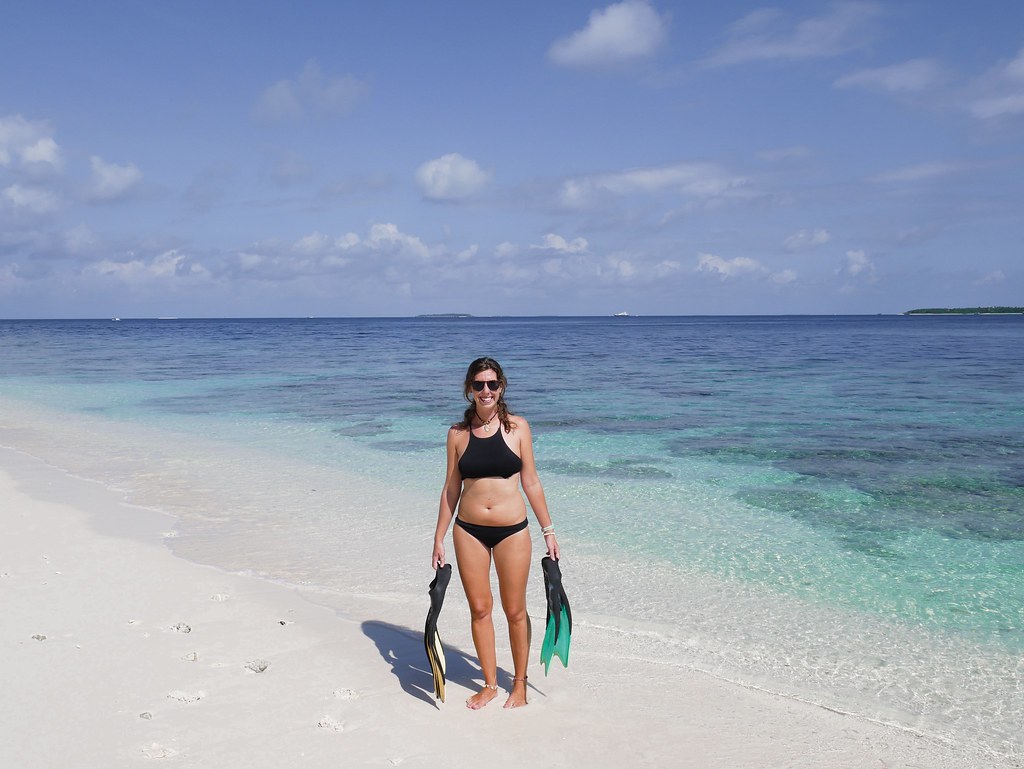 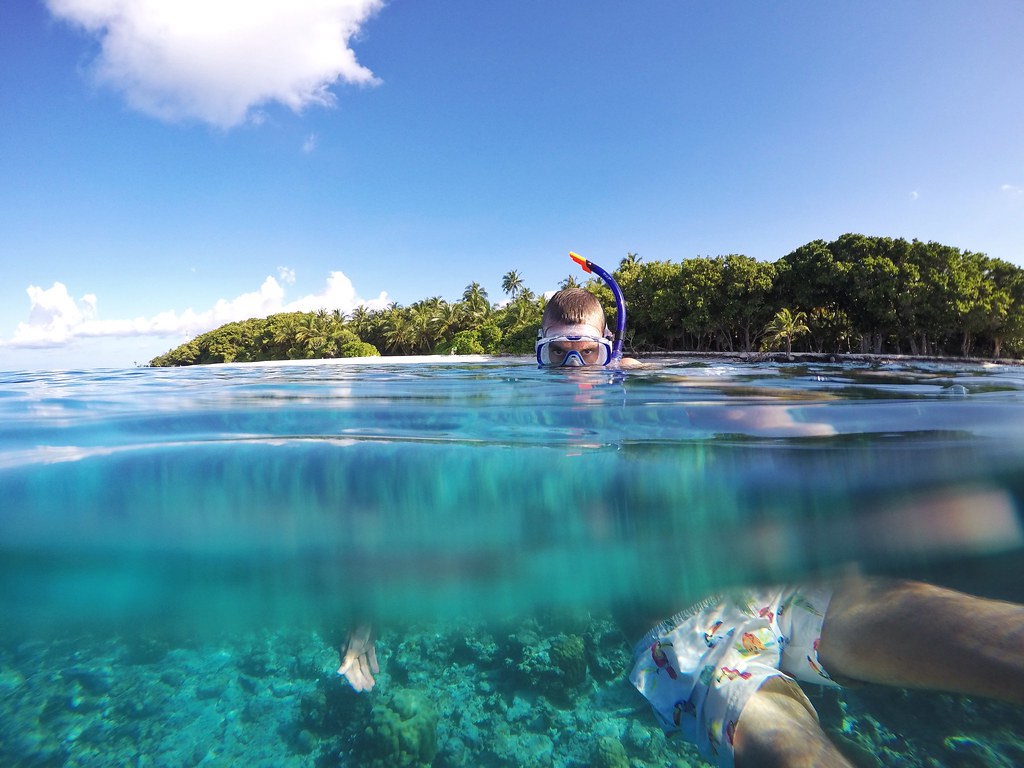 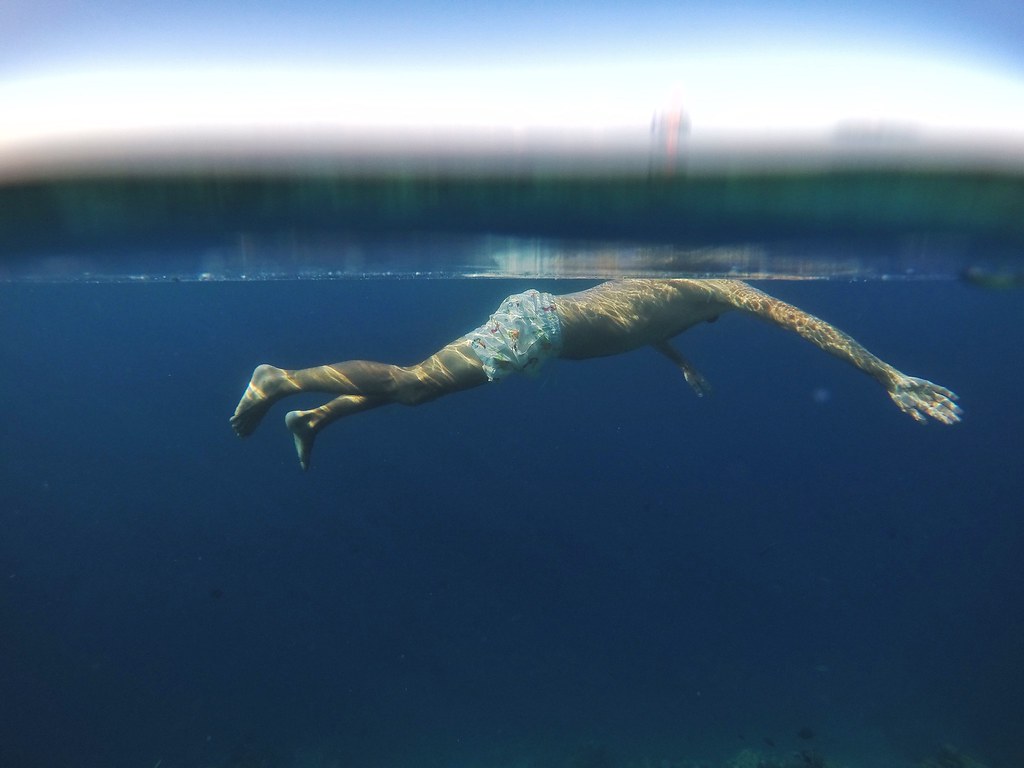 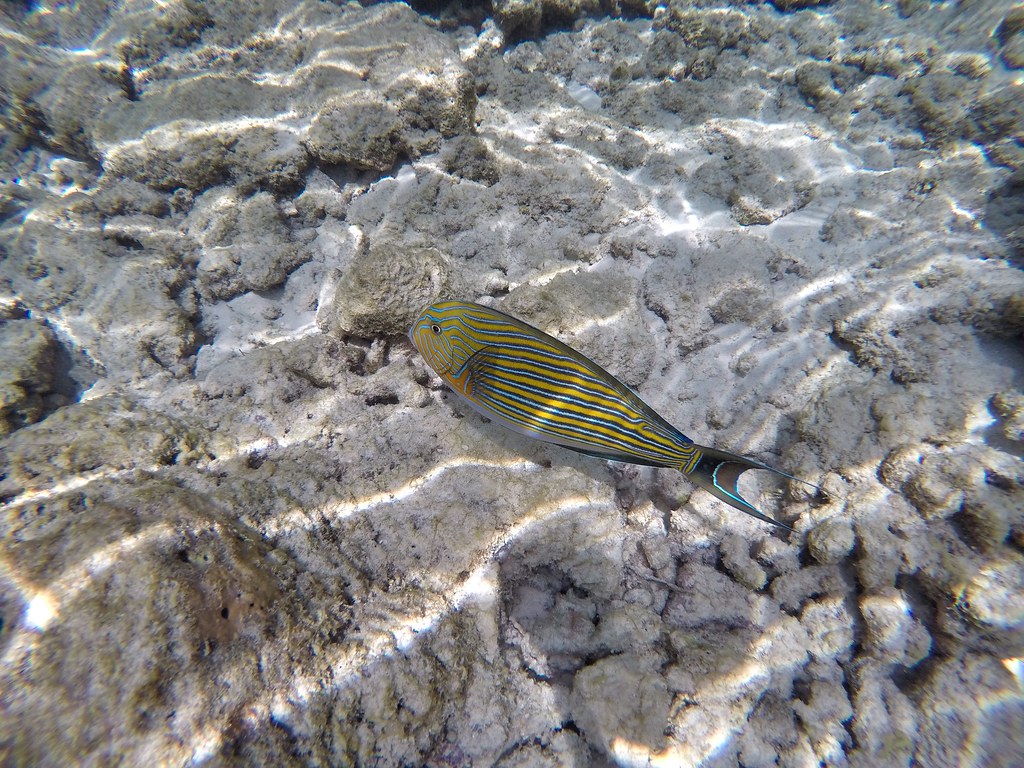 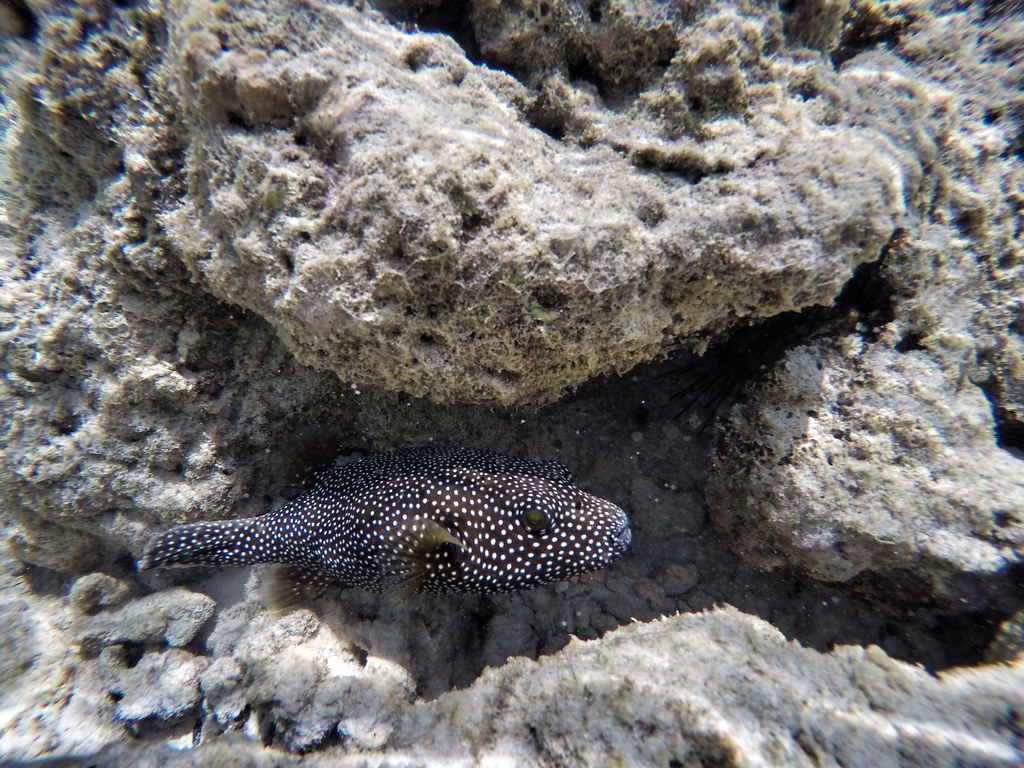 The sea was clearly alive though and on a few occasions we saw dolphins swimming parallel to our beach. We would rush into the sea with our snorkels and swim out to see them….but every time we’d find ourselves treading water above the drop-off and look up to see the dolphins were way too far away, either that or we just needed to grow some balls and swim over the creepy abyss to them. We did discuss sharks with our host as we were hoping to see reef sharks, the discussion led to some friends of his paying to dive with giant tiger sharks and then our host said “if a shark come for you, blow bubbles towards it with your snorkel…if he come back, then he wants to eat you”. Our faces dropped and the he let out a giggle “oh no, not here, in another Atoll to the south!”. 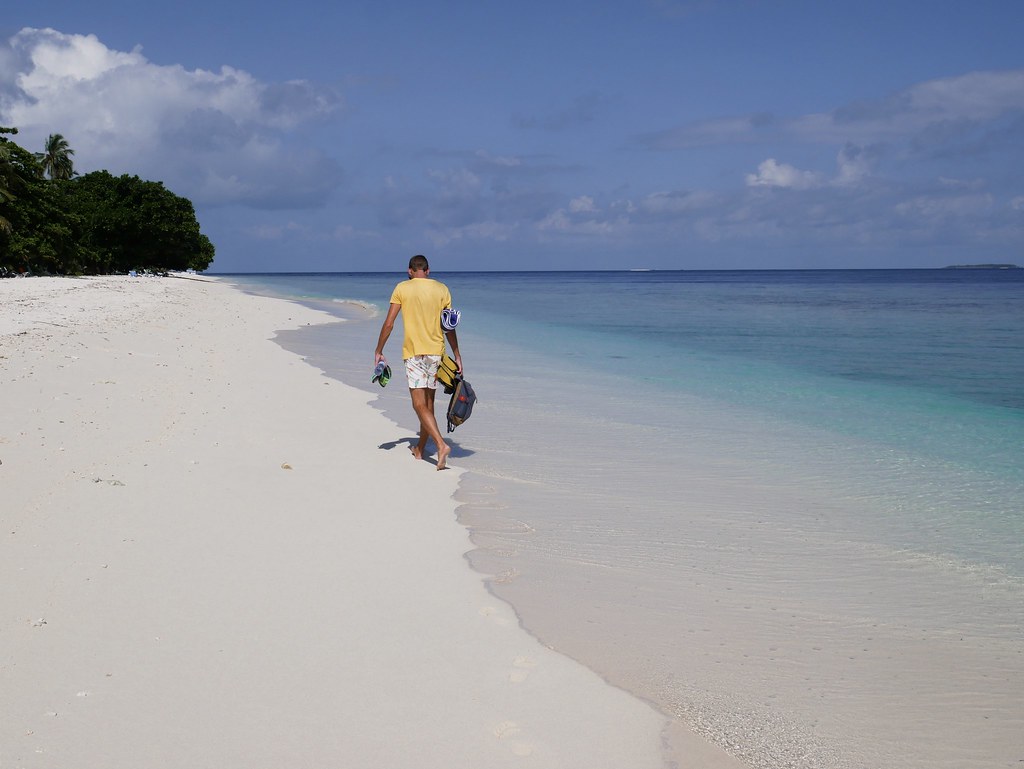 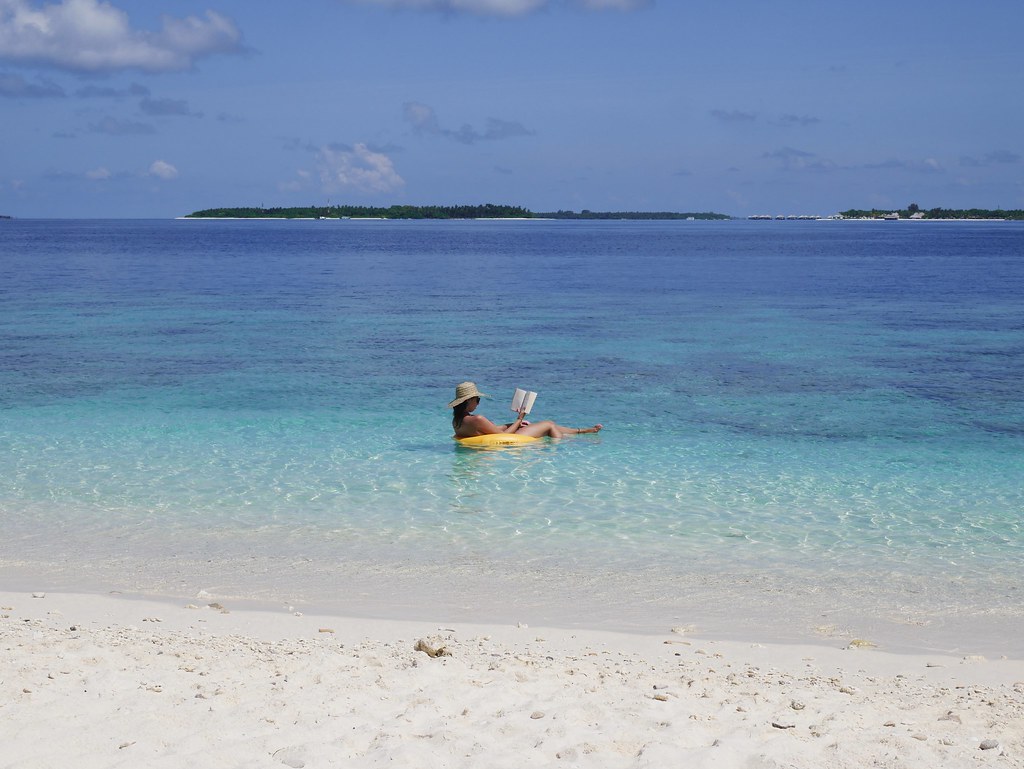 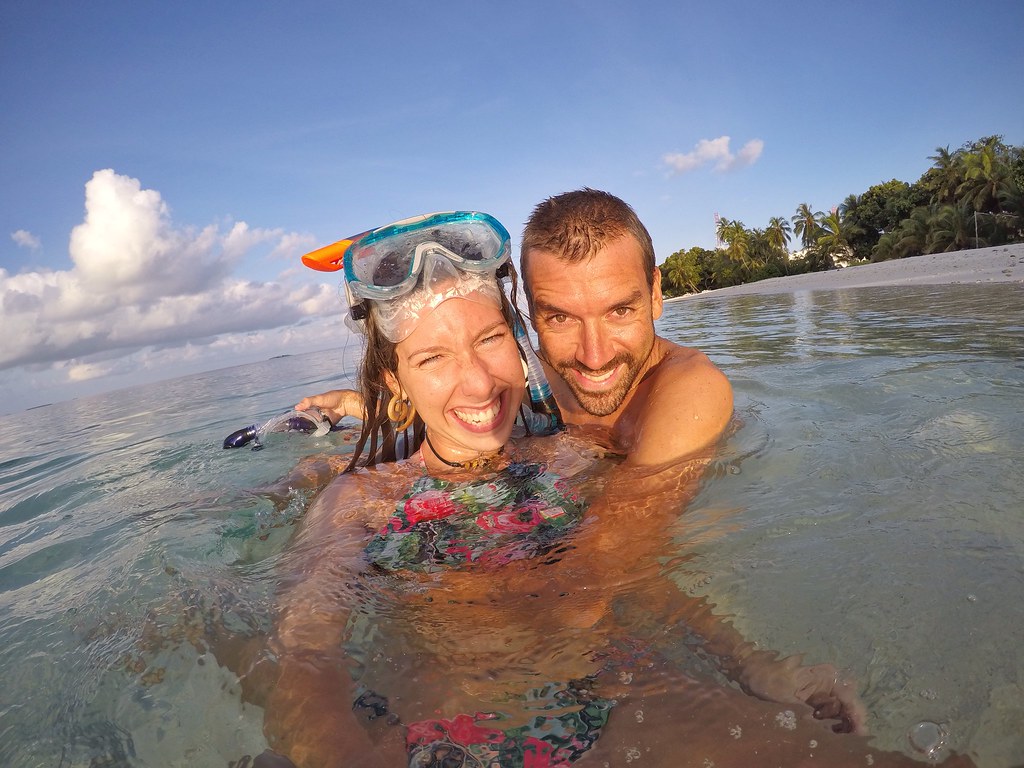 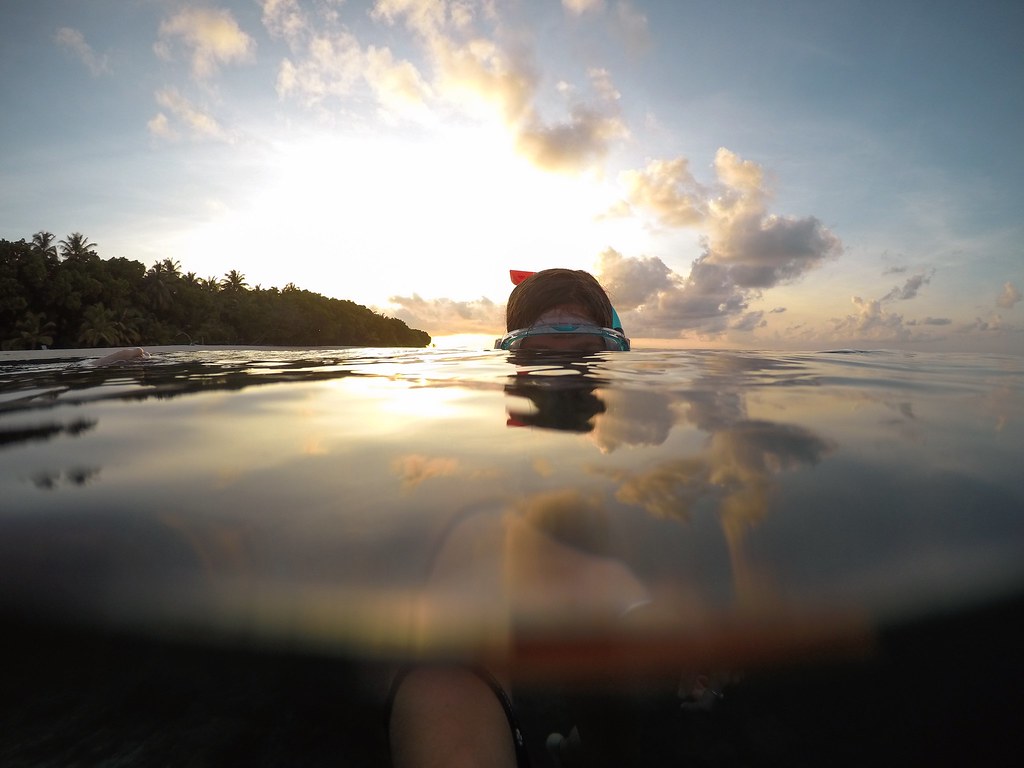 We picked Dharavandhoo Island due to its proximity to Hanifaru Bay where the manta ray migration and mass feeding of plankton takes place. We were late in the season for it so for our week stay we awaited news of them turning up so we could snorkel with them. A couple of months ago in August tourists were snorkelling with 200 of these gentle giants, we knew we’d missed the big groups but we hoped for a smaller gathering. Another reason we chose this island was because it had cheap excursions, two hour trips cost just $25 per person and our host even had his own boat so each excursion had just us and him onboard. It ended up being a wonderful stay on Dharavandhoo with unseasonably good weather for rainy season with 7 days of sunshine and no wind (it rained nonstop the week before our arrival), this meant we had some incredible sunsets too and got to do all the excursions we wished to do, which I will be writing about soon… 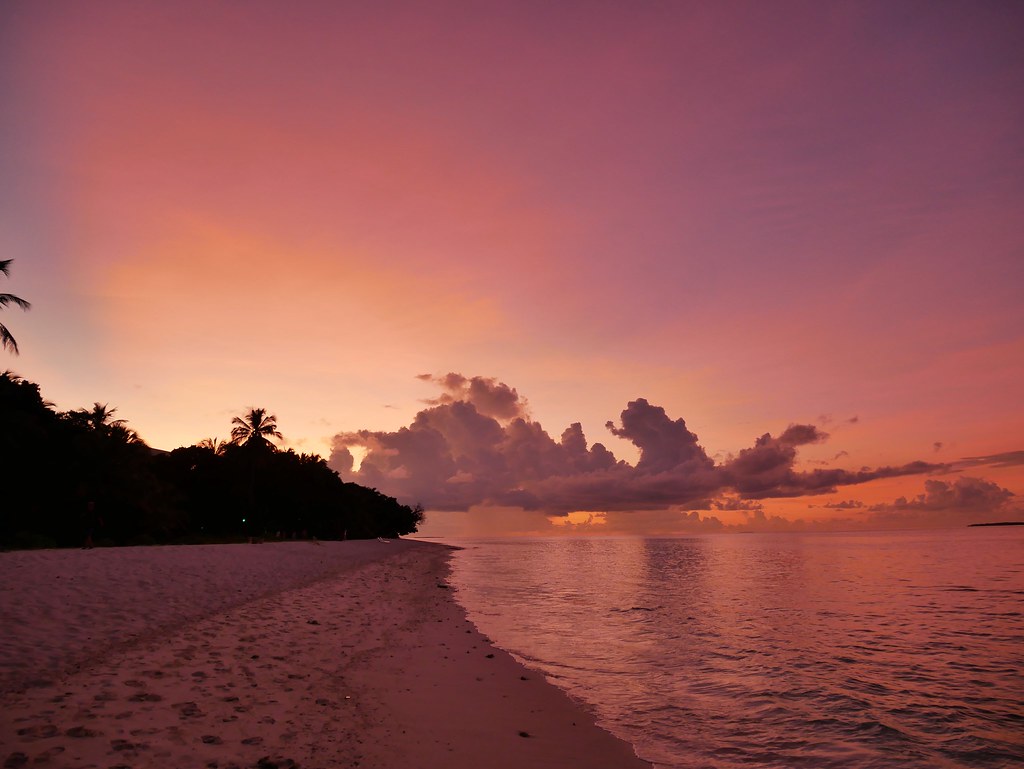 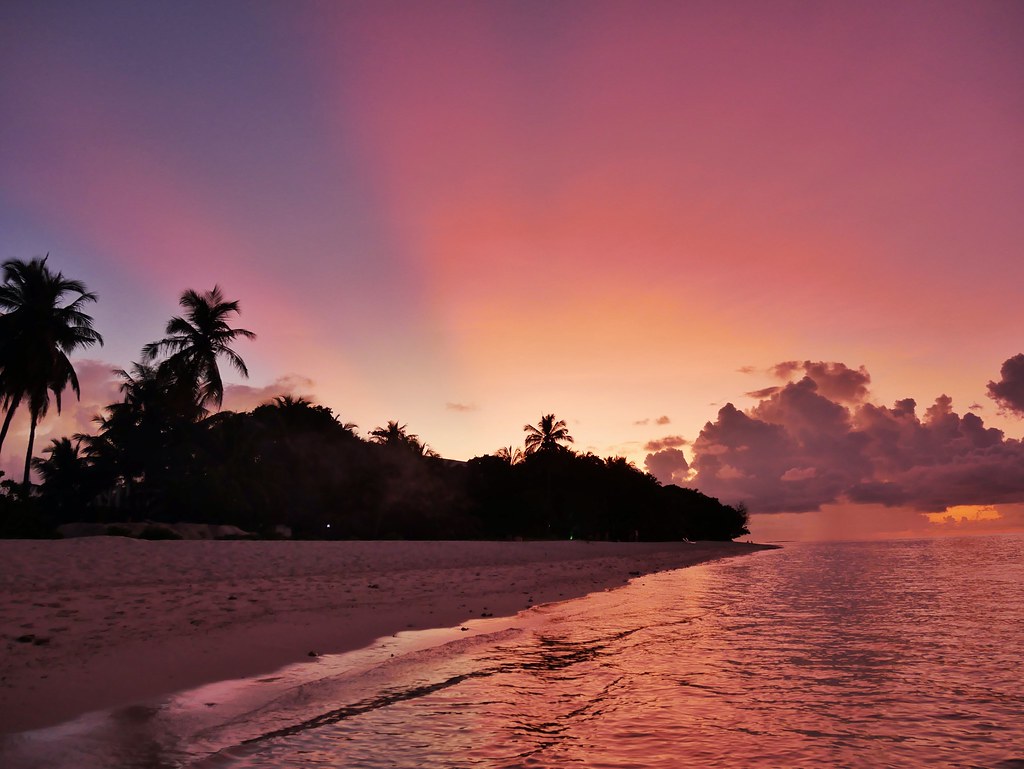