The 6:40am train took us from Ella to the town of Haputale which sits on a dramatic ridge-line surrounded by lush green hills and tea plantations. School kids were hanging out the doorways enjoying the cool breeze as the train casually chugged through the hill country and after an hour we arrived in Haputale. We were quick to hop straight into a tuk tuk and head up to 1950m elevation before the clouds rolled in. The summit was named Lipton’s Seat as this is said to be the very spot where Sir Lipton gazed across his tea empire. 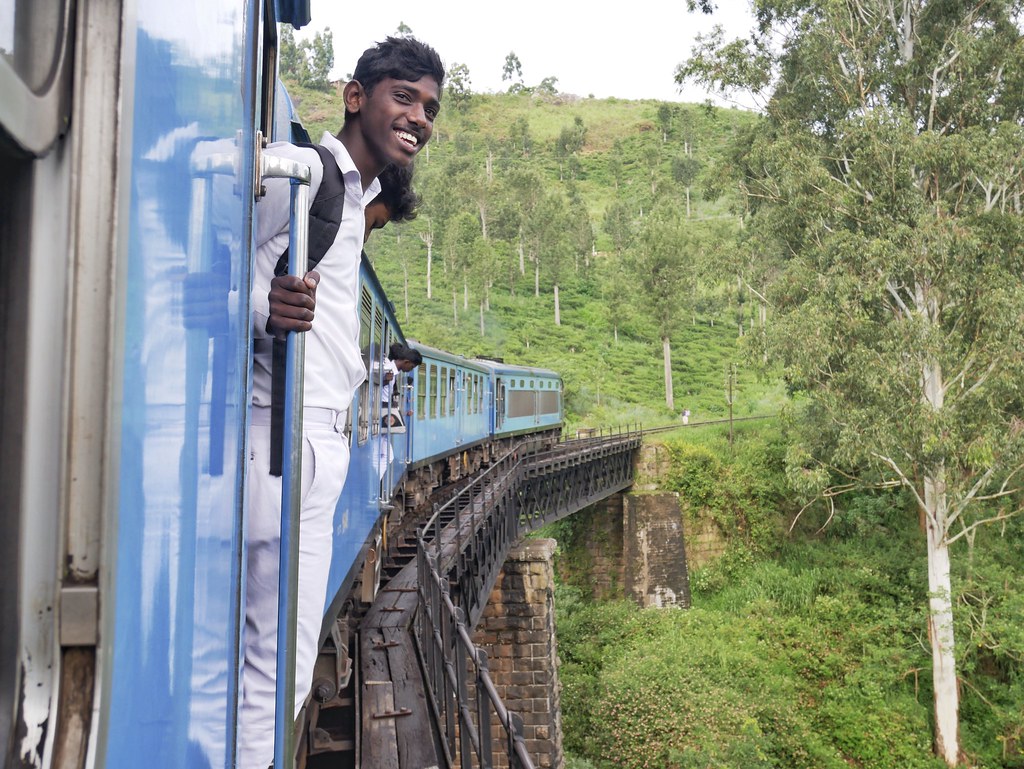 The views on the way up were absolutely jaw dropping with rows of tea bushes winding their way around the hills in the most pristine manner. We passed a group of ladies picking tea leaves close to the road and our driver stopped and asked if we wanted to take a photo. I did of course, but I shyly said “yes…but I don’t want to pay for it”, he smiled and assured me they won’t ask for money. He was right, they were so sweet and even stopped picking for a moment to pose for photos. They all had sacks on their backs which they carried with a head strap. They looked different than in the other places we visited in Sri Lanka, and it’s because most of the tea workers were Tamils, originally from India and brought over to help with tea production. A lot of the ladies were working in beautiful saris which seemed too nice to be gardening in, but it’s their everyday clothes and the equivalent of me wearing jeans and a top. Most of the workers were Hindus and wore a red bindi to show they were either married or to ward off bad luck and they smiled a lot, they seemed like a very happy bunch yet they were working for very little money. Our driver said they pick 18 kilos a day, walk about 15km and earn roughly $4. 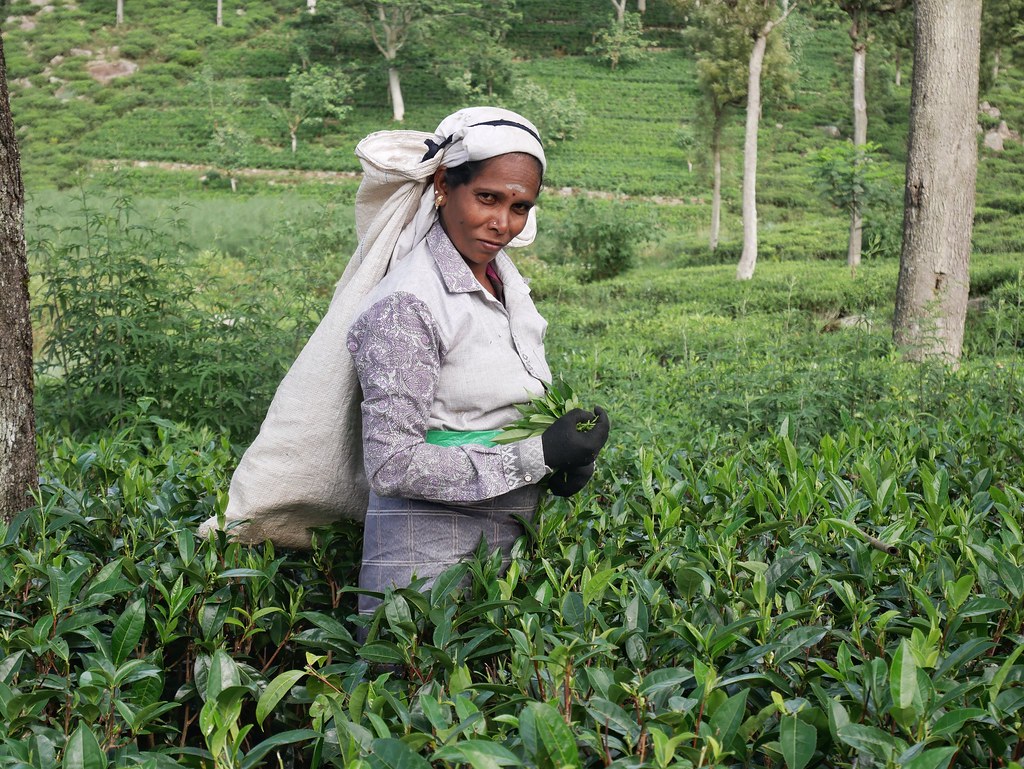 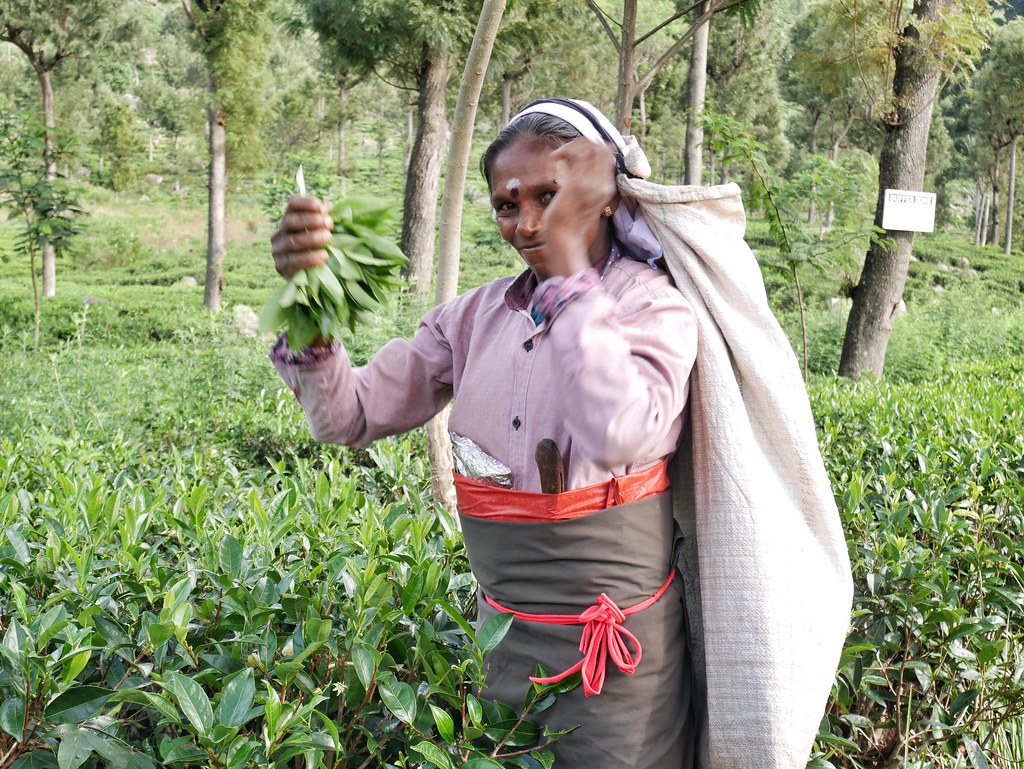 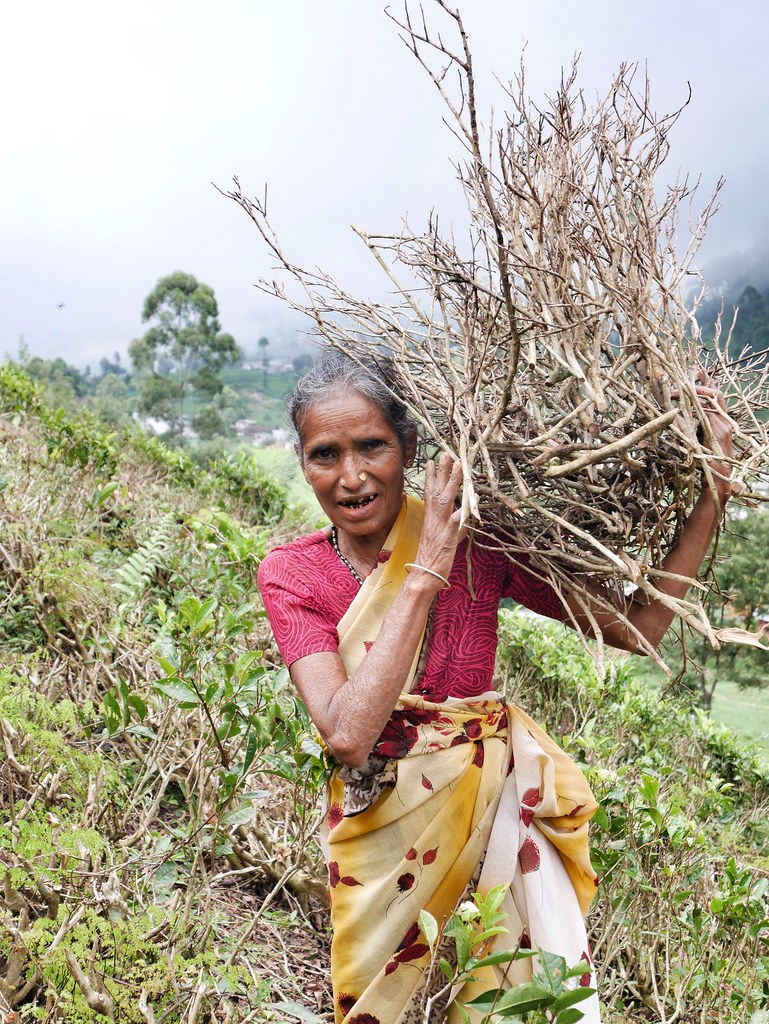 We reached the top and said goodbye to our tuk tuk driver as we had decided to walk back down about 8km to the tea factory and then return to Ella by bus. The view was actually better further down the road than at the top, but it was still wonderful and we soaked it in with breakfast at a little cafe. There were no menus but we were handed a plate of rotis and deep fried delights. Each piece was 50 rupies (30 cents) which was very reasonable for the location and we got a pot of tea too. A monkey came along and we knew what he wanted, he didn’t mess around though, abruptly jumping onto our table and luckily our squeals, roars and arm flinging were enough to get him to retreat. The food was actually very tasty, unlike the normal dry roti this stuff tasted more like Greek pitta and the tea was sipped while nibbling on un-identified brown sugar lumps which were very moorish. The bill ended up costing a whopping $8 so we worked out how much we ate and realised they either did their math wrong or scammed us by charging $3.50 for a pot of tea in a place where we were literally surrounded by tea. We just sucked it up though, not wanting to make a fuss in front of the other customers but we moaned about it a lot on our walk back down the plantation. 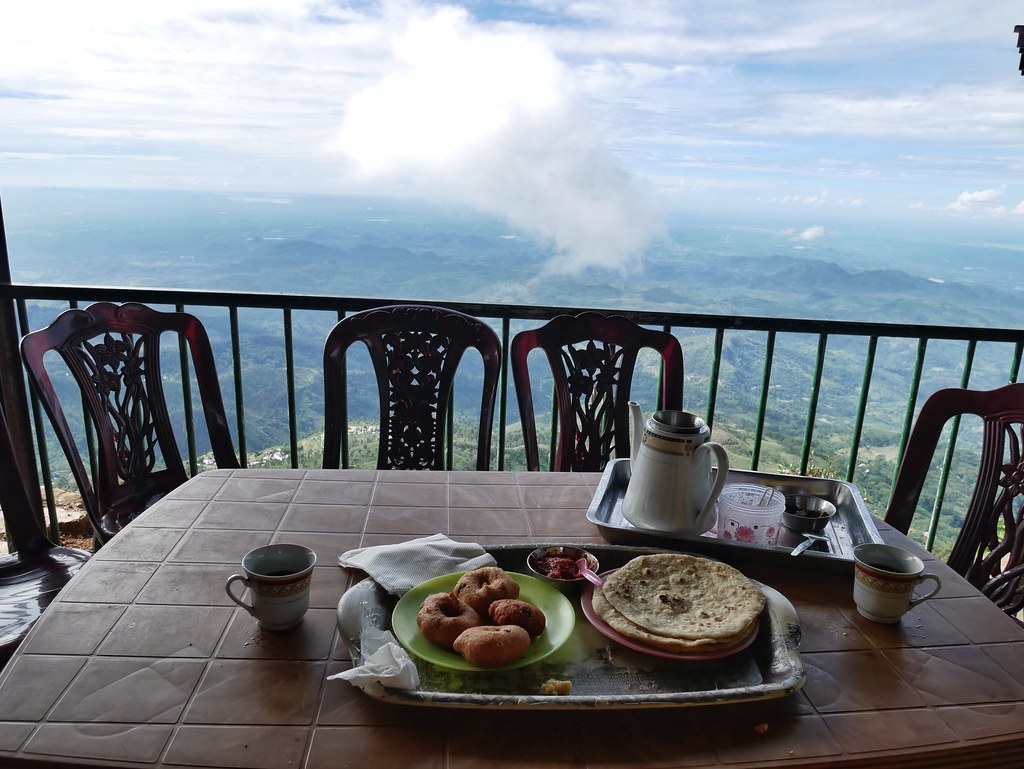 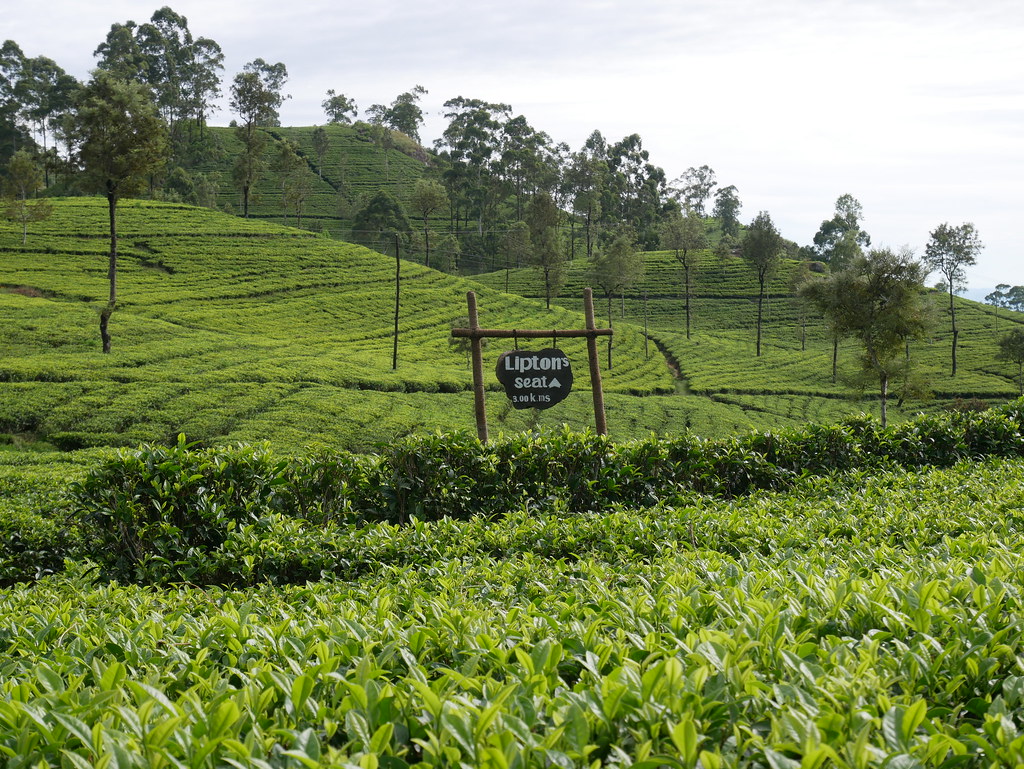 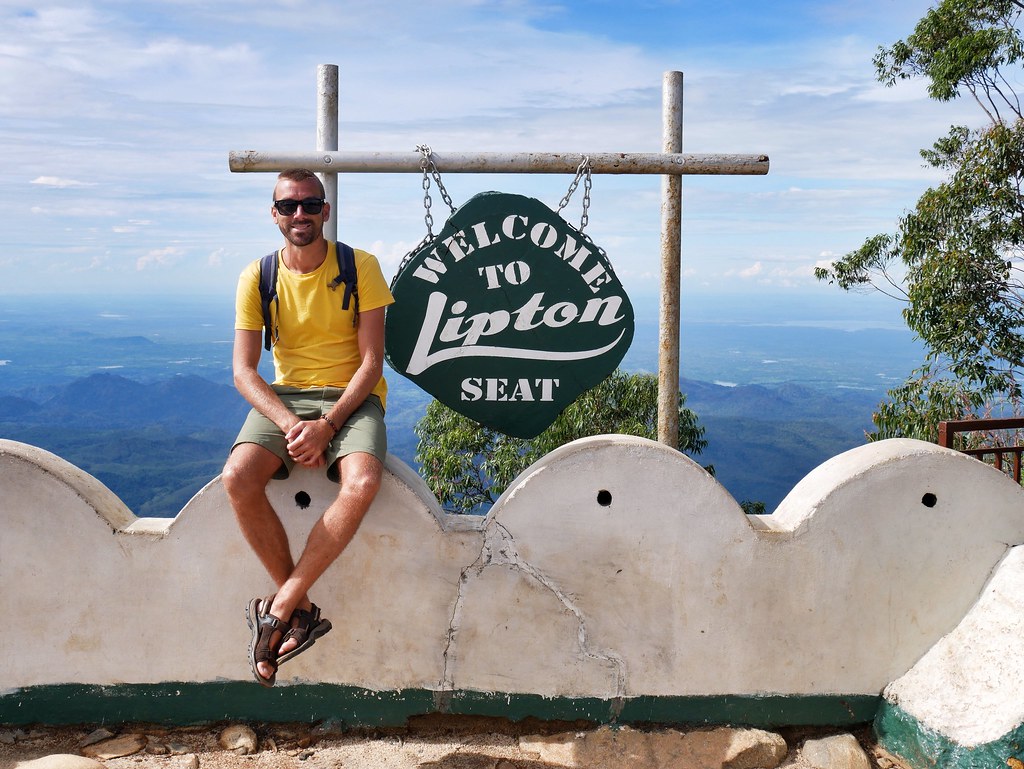 The British brought the tea plantations to Sri Lanka and they must have employed some Tamils with serious OCD to create such neat rows of plants. It was almost soothing looking at them, like raked lines through sand. The clouds formed earlier than expected due to our high altitude but it only added to the atmosphere. Some tourists got a ride up and down in a tuk tuk but it seemed like a shame as for us the highlight was walking through the fields of tea and seeing the weather change. 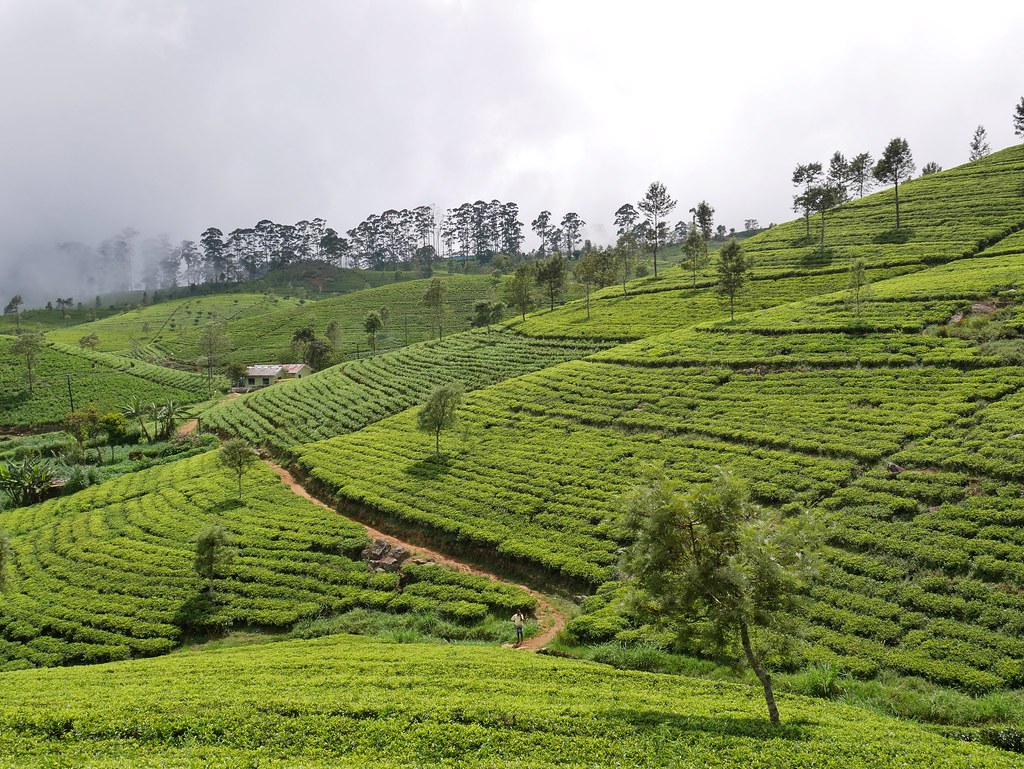 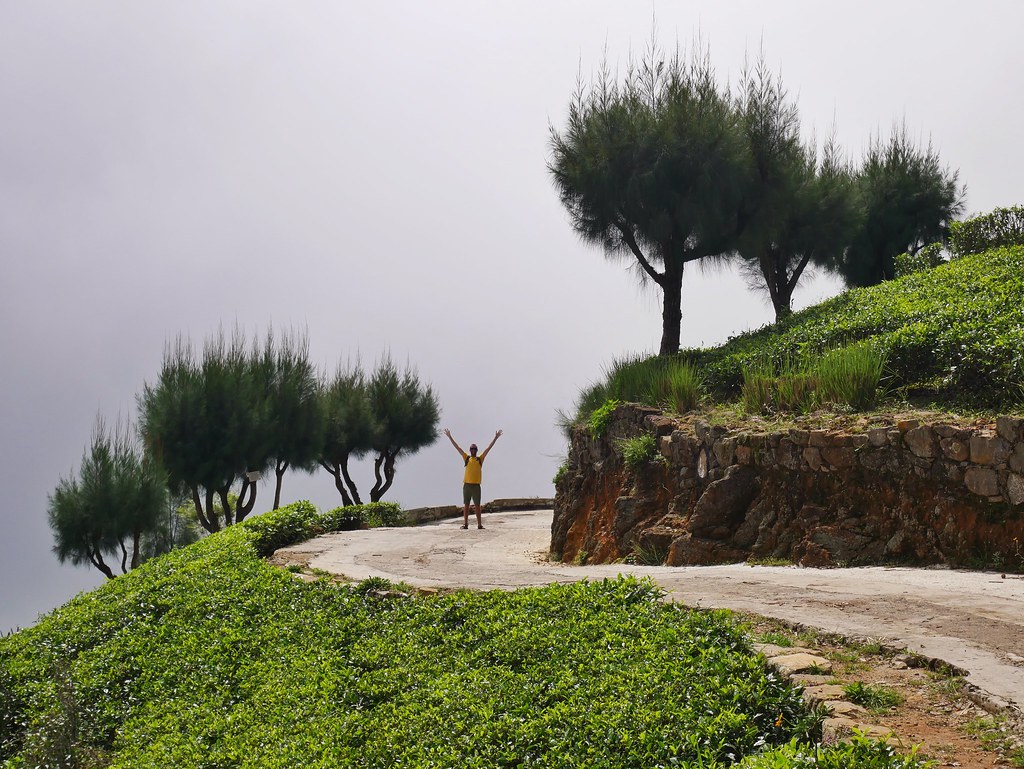 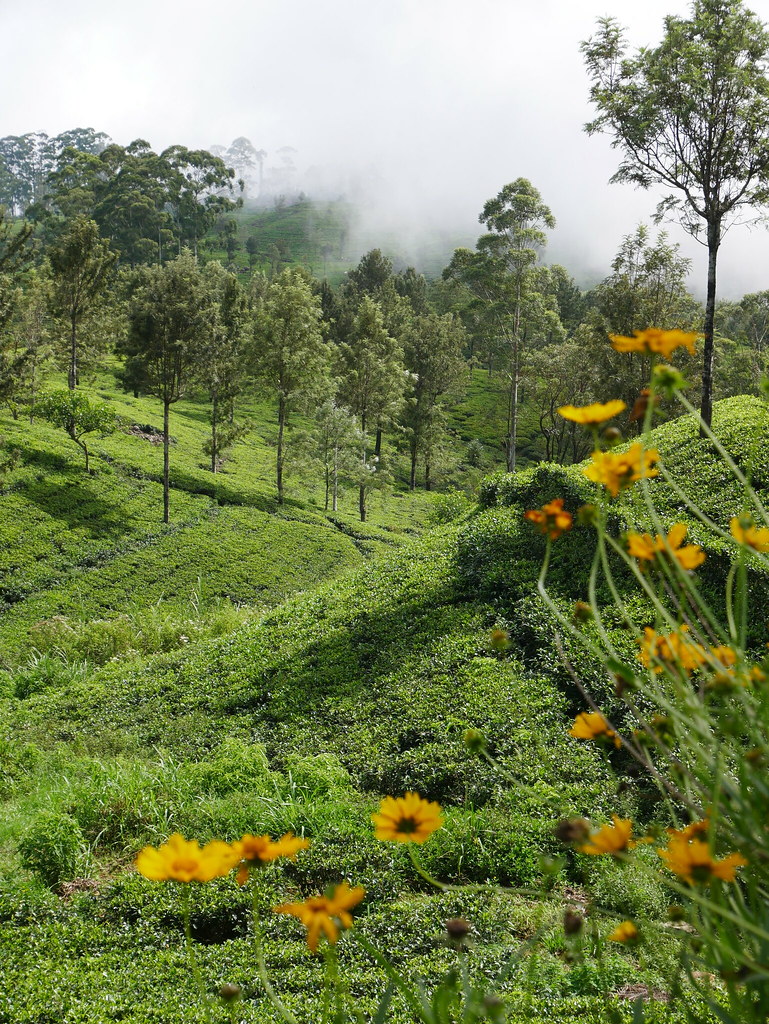 The tea workers lived amongst the plantation in colourful houses dotted across the lush green surroundings. I think it would be a wonderful place for kids to grow up with hours spent playing hide and seek through the maze of tea bushes. We walked for about two hours with huge grins on our faces because the area had such a nice vibe, the locals were the friendliest and smiliest we’d met in Sri Lanka and the scenery was breathtaking. 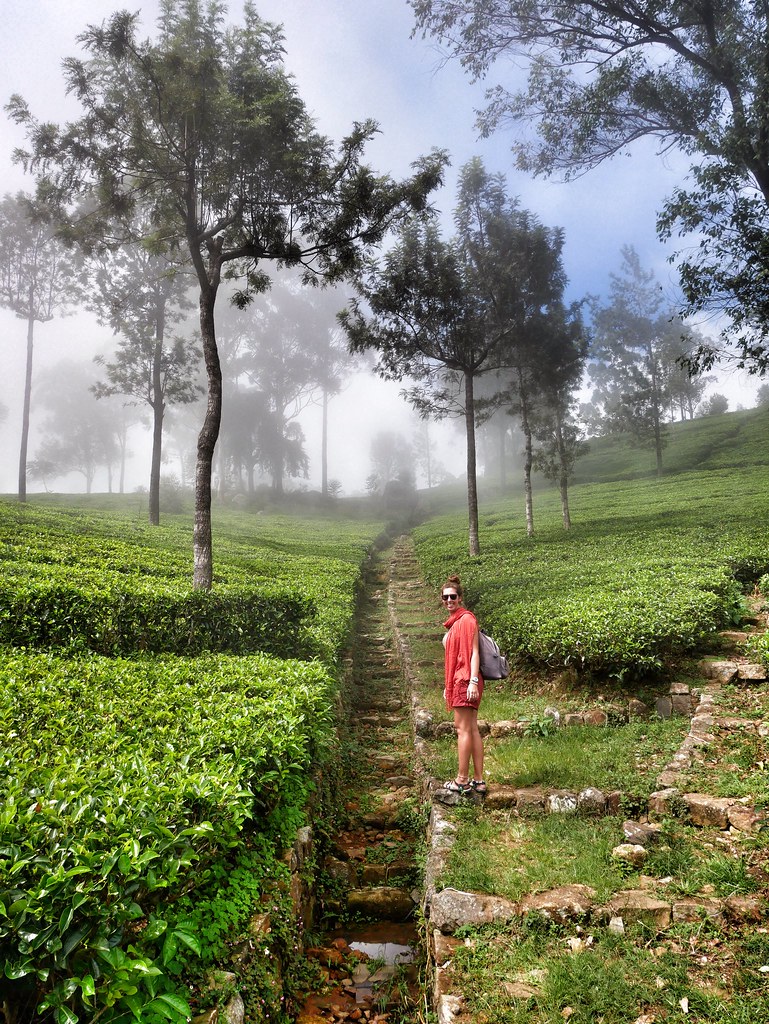 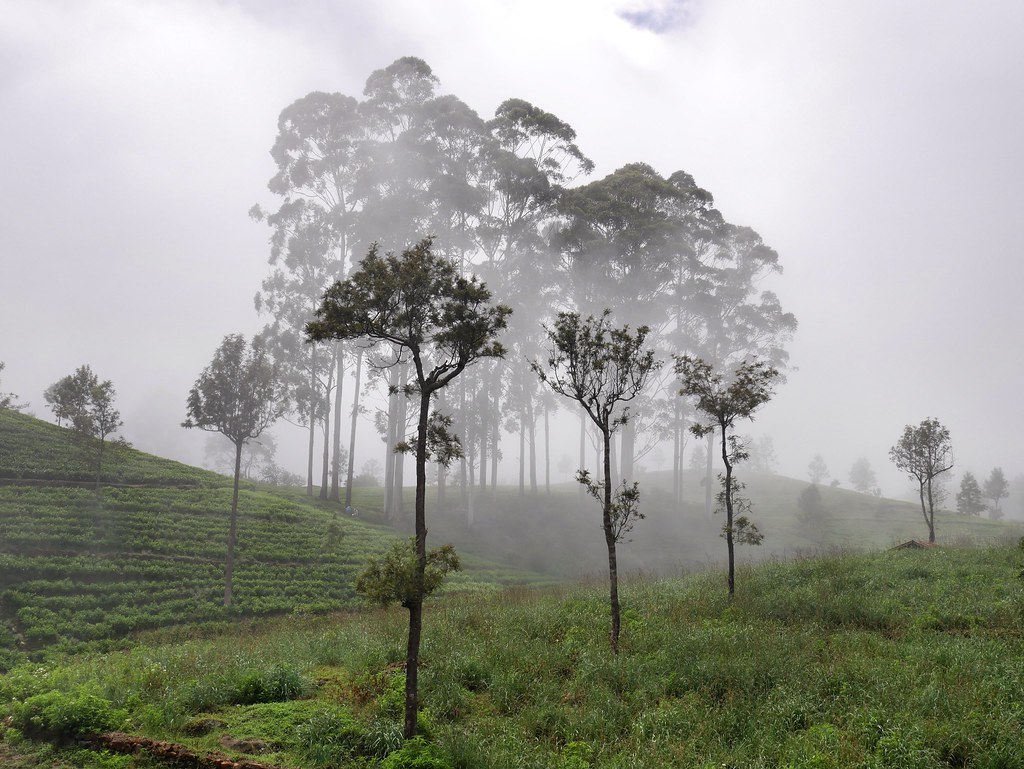 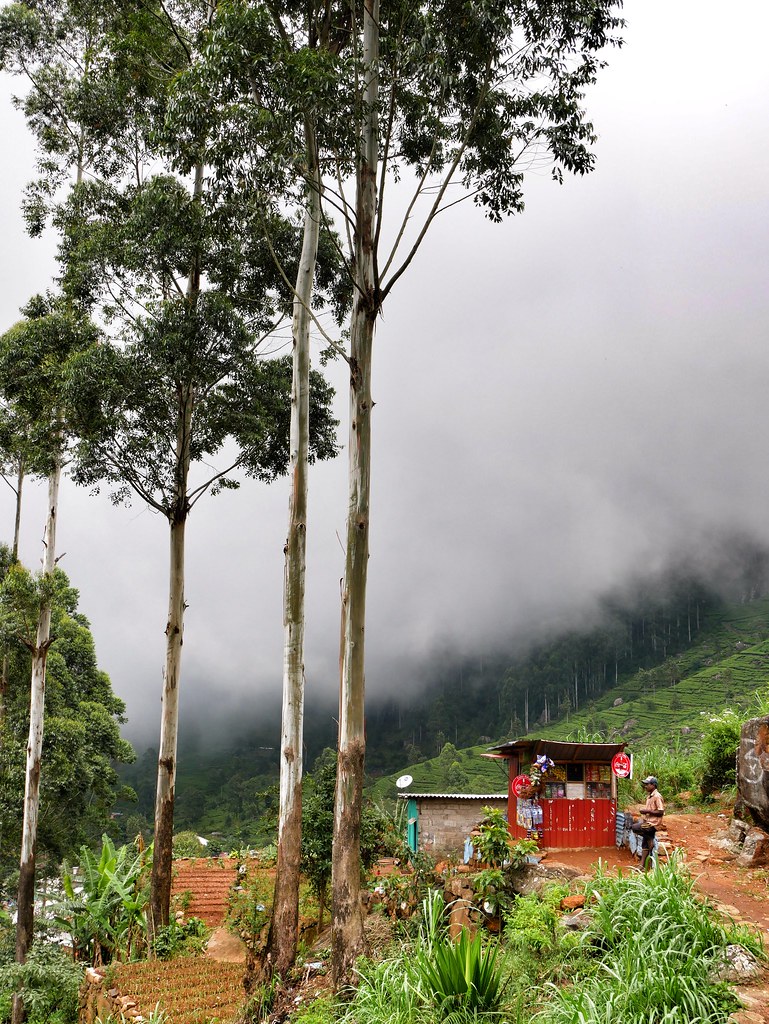 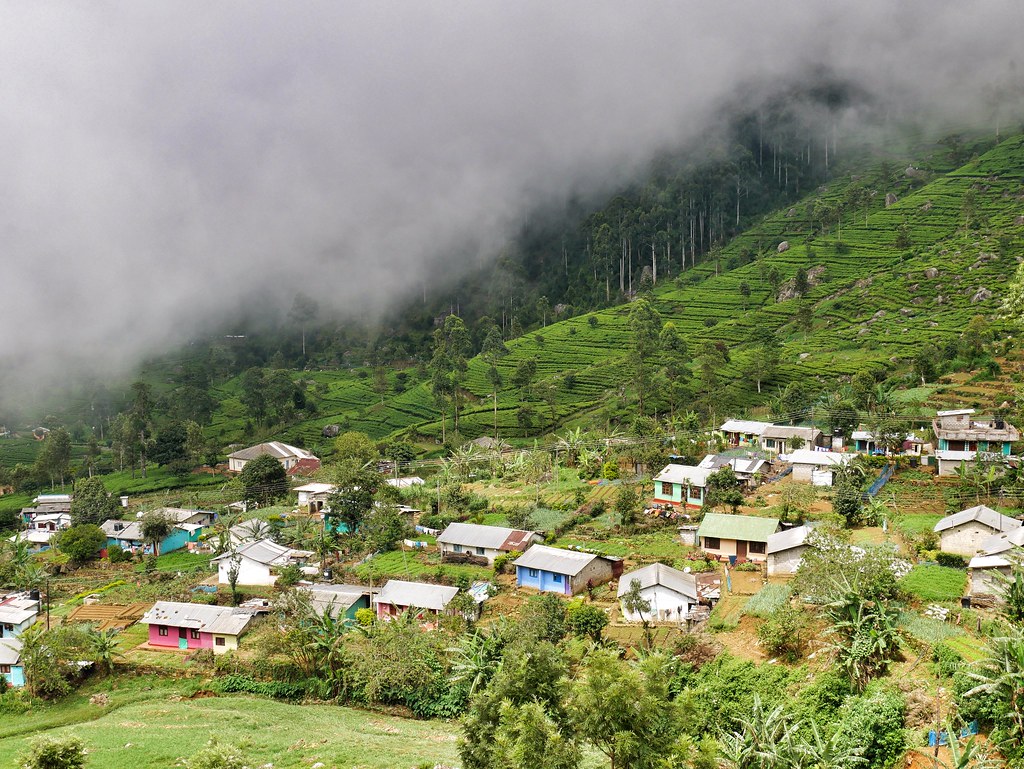 We made it down to the tea factory which was a massive building covered in windows. It looked more like a mental asylum than a place where people worked hard to create the perfect brew. We popped inside to get a tour but were sadly informed that there was no production happening due to no leaves on that day. It was a shame as I wanted to see and smell the magic happen. Instead we got a free cup of tea and ended up sitting in on a sales pitch with a group of retirees from Australia doing a food tour around the country. I couldn’t believe how much they were charging for tea straight from the farm, about $15 for a bag…I can get a box of 100 Tetley teabags in England for a quid! The worst thing was their guide made a point of buying two expensive packs of tea, acting like a casual customer and handing over the money (which I’m sure he would get back) and of course the Ozzies all followed suit, buying some because it must be a good deal if their local guide was purchasing his tea from there. So we left without a tour and walked down the road enjoying more views until the bus rolled down and took us back to Bandarawella and then another one to Ella. It was probably the best scenery we’d seen in Sri Lanka and a place I’d highly recommended to visit. The weird thing is it was one of the least busy sights we’ve visited in Sri Lanka with no local tourists and maybe 15 foreigners. So go and see this magical place before everyone realises how special it is. 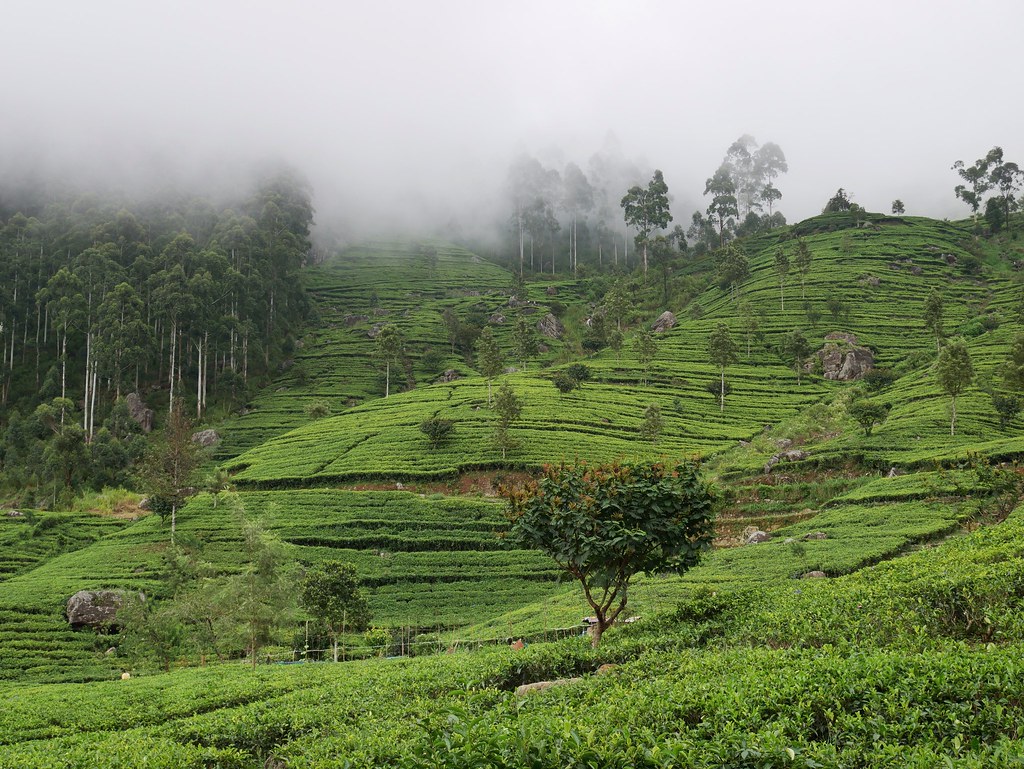 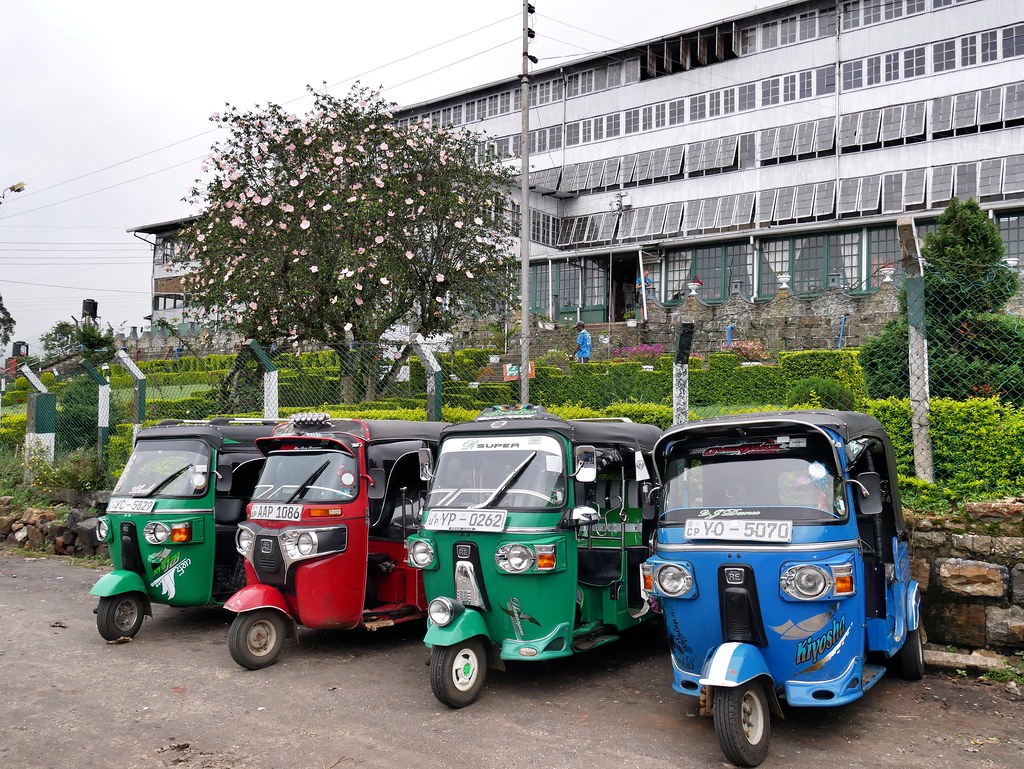 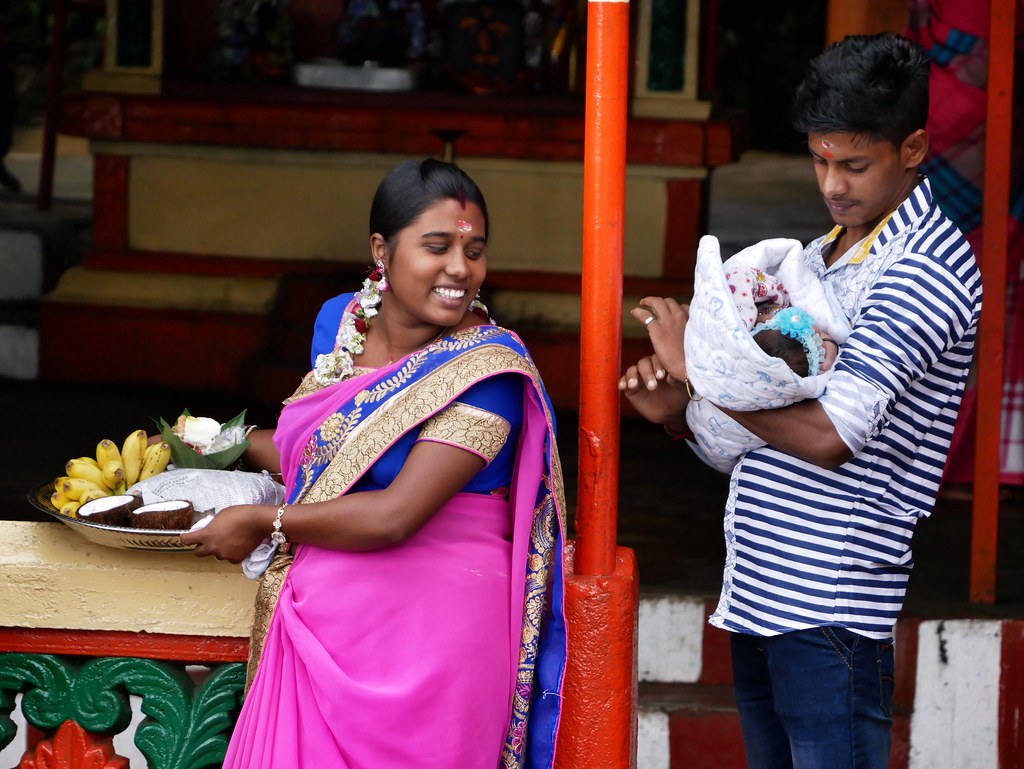