We woke before the sun, strapped our head torches on and wandered down the silent road towards Little Adams Peak. It’s one of the main highlights of Ella and we were excited to see the view unfold as the sun rose. The road led to a trail and finally some steps to the top. There were actually three peaks set along a ridge line and we opted to go to the middle one, away from a group of people. We waited for the sun to stain the clouds in vibrant colours but we were left a little deflated. There was too much cloud around but on the plus side it also spread out below us creating a blanket of clouds across the lowlands with hills piercing through the white layer. An overhanging rock gave us a great vantage point down the valley with steep green mountains and a tiny road wrapped around the base like a ribbon on a present. 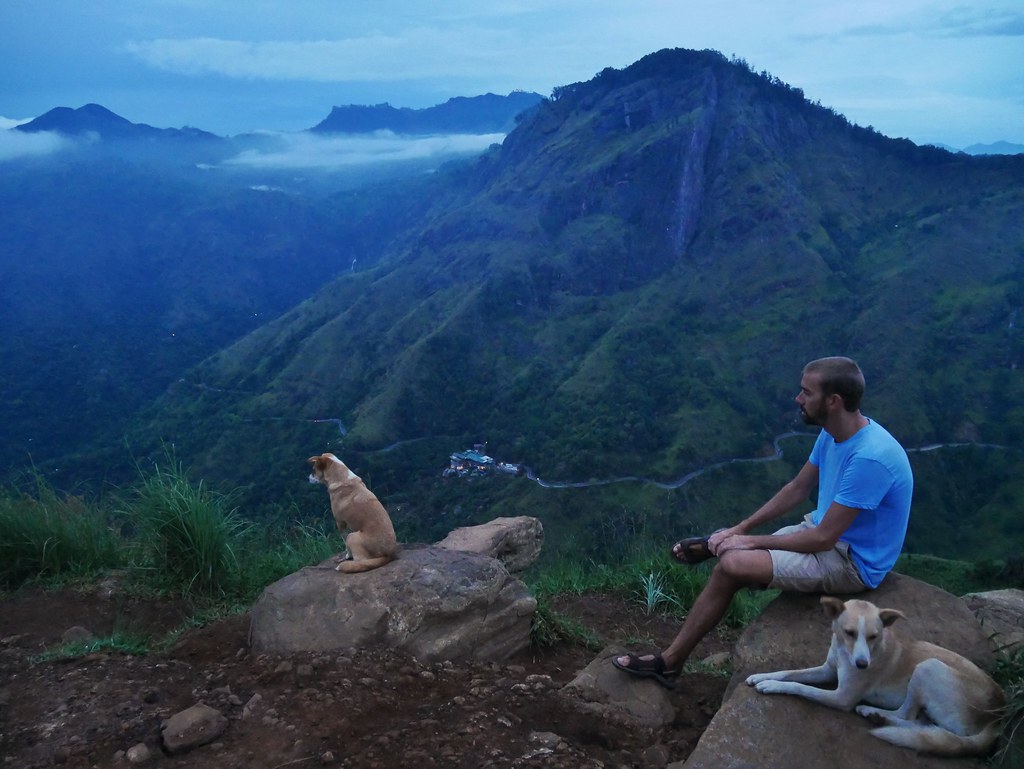 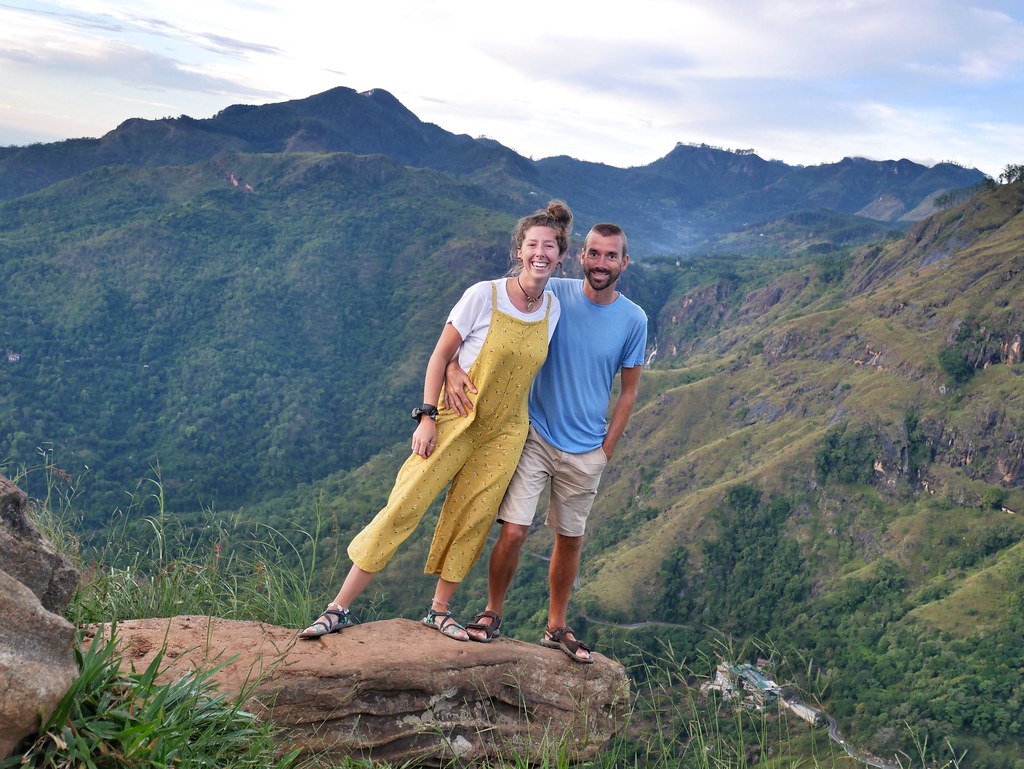 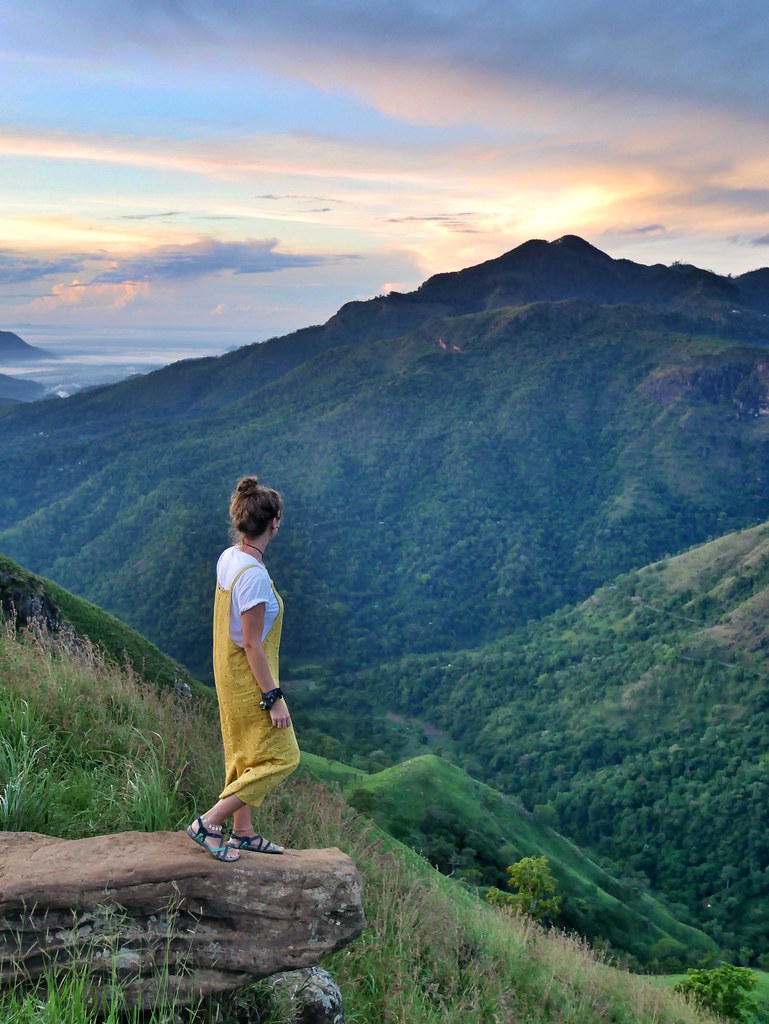 We figured we were unlucky with that sunrise so we tried again the next day and sadly Mother Nature let us down again. In fact we’ve decided sunrises just aren’t worth the early start and we both came down with a cold after two 4.45am wake ups in a row. It was even cloudier on our second visit and it swooped across at eye level like spirits drifting past us. The only downfall to this hike (except for the obvious shit sunrises) was the dogs. They follow tourists up to the top and then there’s major territory wars. The growling didn’t stop, one dog in particular was like a demon, and all the other dogs clearly looked up to her and showed their loyalty by continuously nibbling fleas and ticks from her until her fur was slick with saliva. Some dogs just wanted to relax next to us but then the gang war would start up again and after my new awareness of rabies I didn’t feel very safe. 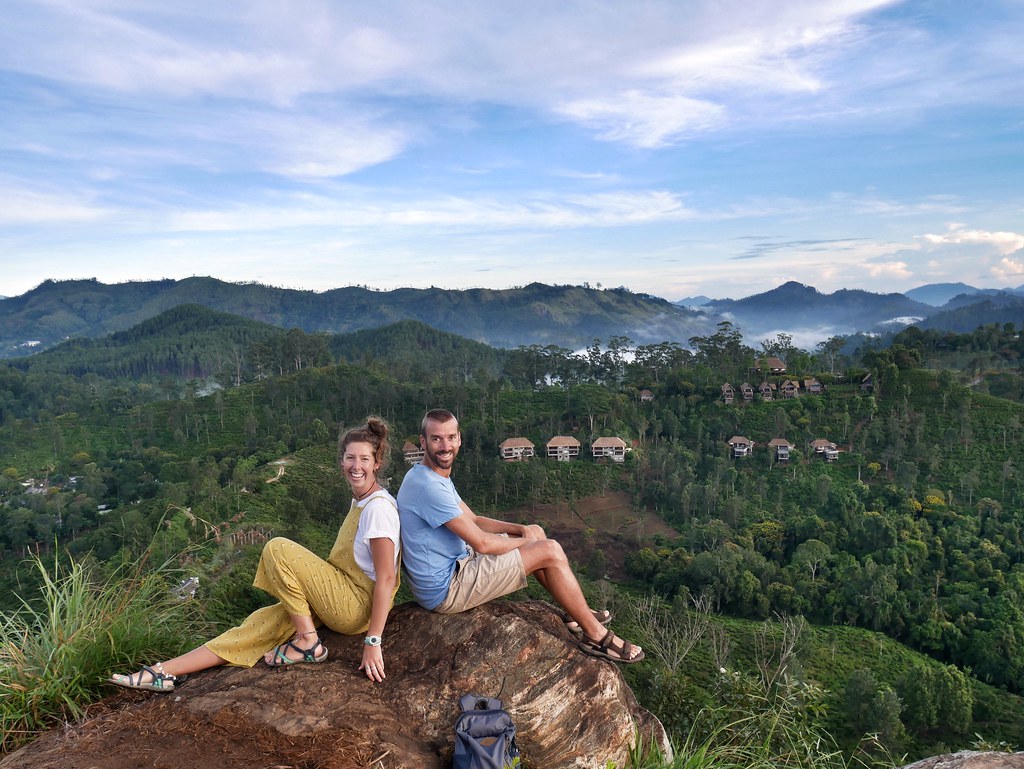 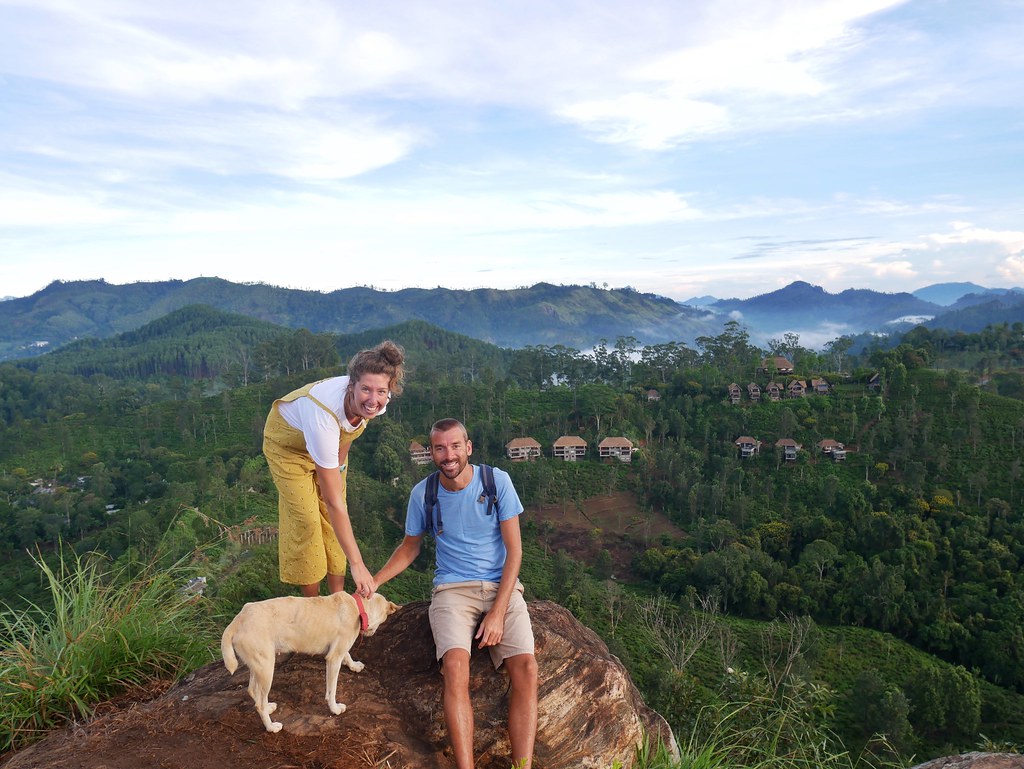 Another popular thing to do in Ella is visit the famous viaduct which we got to by walking along the railway tracks. Most hikes in the area involve a lot of ups and downs due to the hilly terrain but the railway track was nice and flat, if a little annoying having to watch that every step landed on a railway sleeper. Tea plantations and forest lined the steep slopes around the viaduct and we attempted to walk down for a different view. Suddenly I felt a sharp pain on my foot and to my horror I saw a leech attached to me. I didn’t have a lighter to hand so I just had to rip it off but the damn thing kept squishing under my touch and was so slippery. I eventually got the fucker off and it left an open cut. I’m not sure if ripping them off is the best technique, I’m sure I read once if you do it the wrong way they regurgitate their stomach into you! 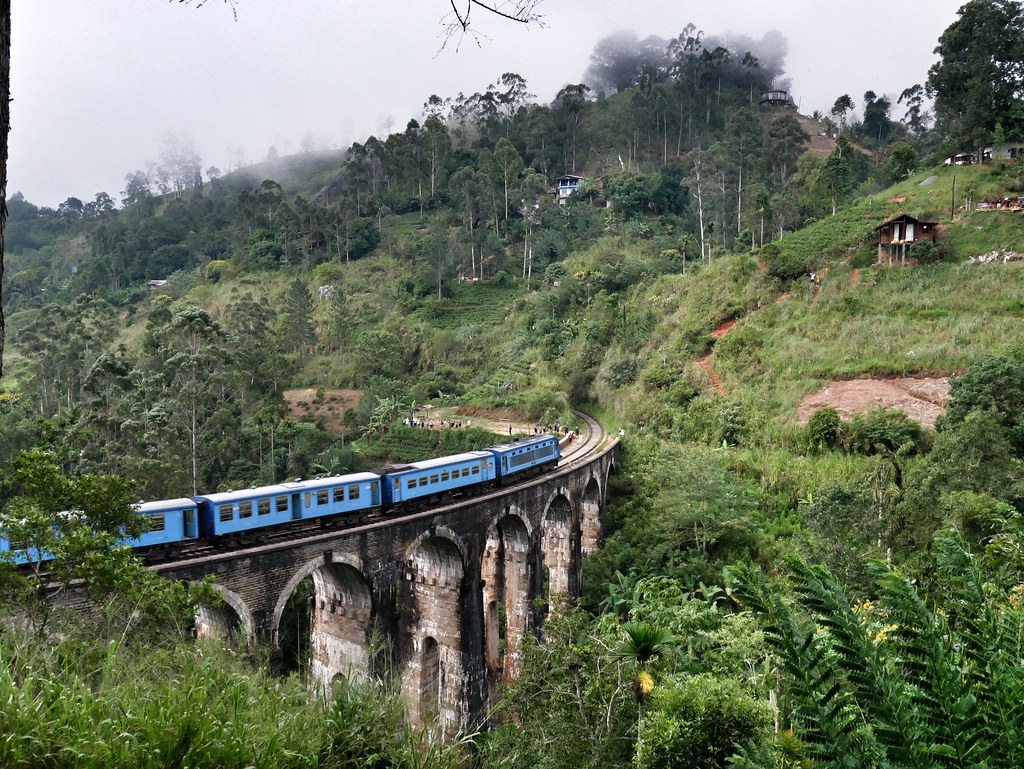 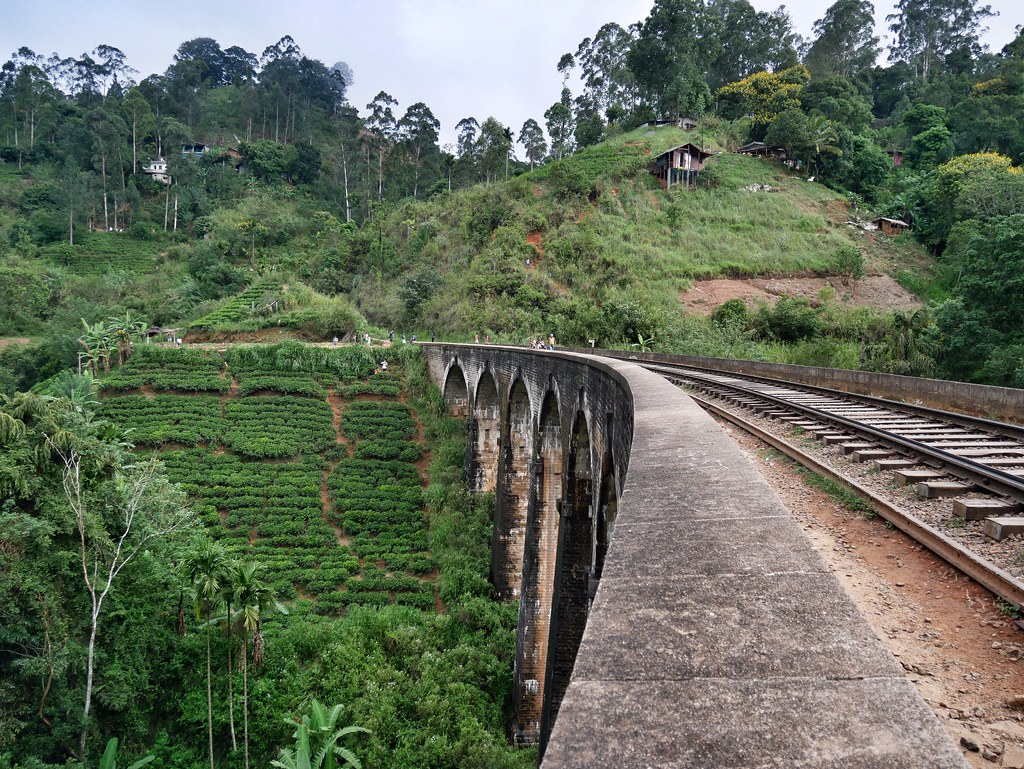 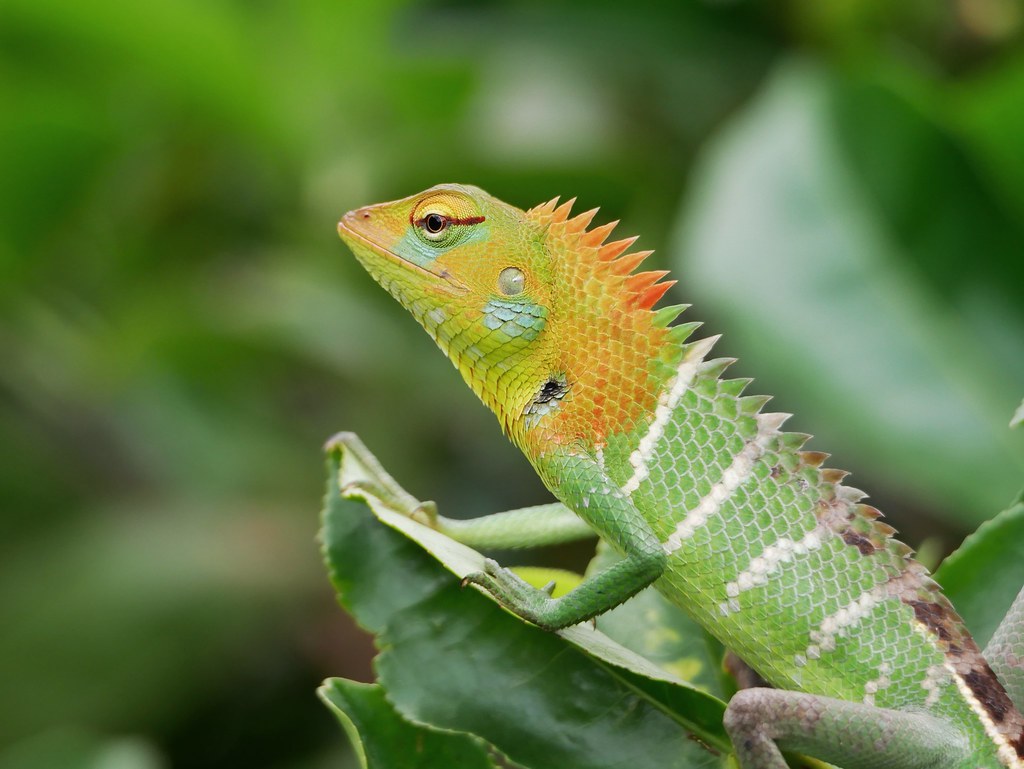 We headed up some steep steps to a little shack of a cafe, ordered a drink and waited for the loud honking of the train. It was on its way, and Craig was ready to snap a photo of me as it went past but a sweet black dog had other ideas as it strutted over to Craig and stood directly in front of the camera. It was so happy to be stroked though and the poor thing had a really sore cut on its backside so I could hardly refuse giving him cuddles and he was polite enough to shuffle away when the train made its grand appearance. As soon as the train curved around the viaduct and slipped into the tunnel there was a roar from the carriages, a happy roar and the sound of people onboard screaming for joy like they were on a rollercoaster ride and it really made us laugh. We revisited the viaduct later that day to see it in cloudier weather and from a different vantage point. There were many different spots to watch the trains pass by and a shortcut trail led through the forest back to our homestay which was convenient. 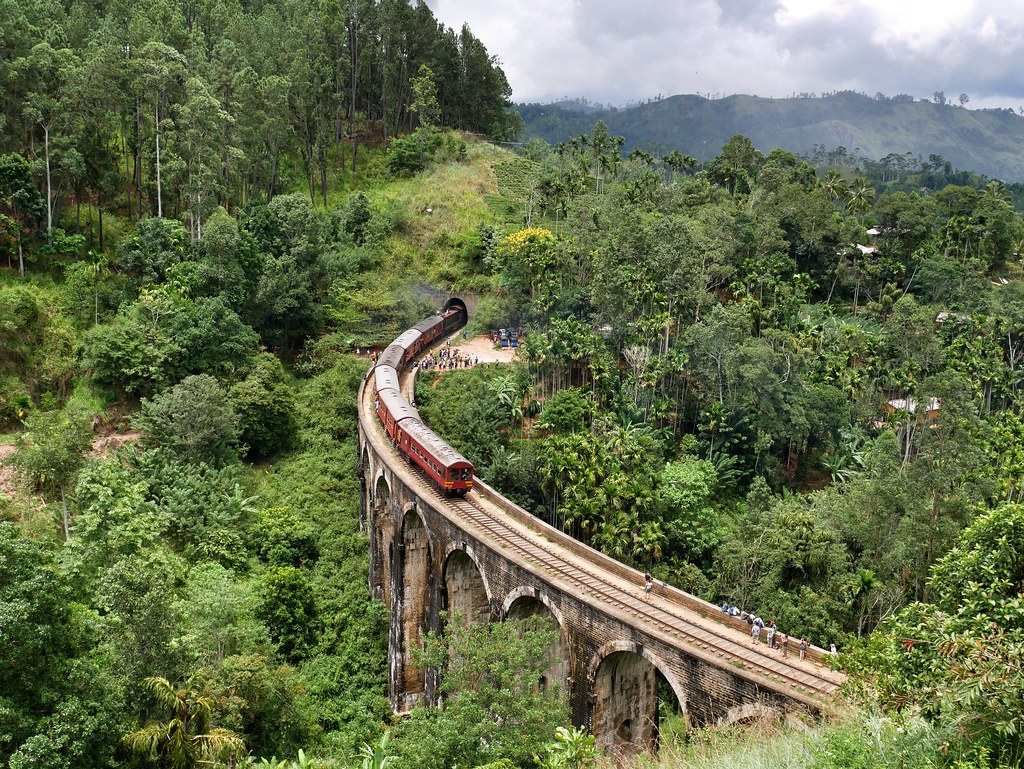 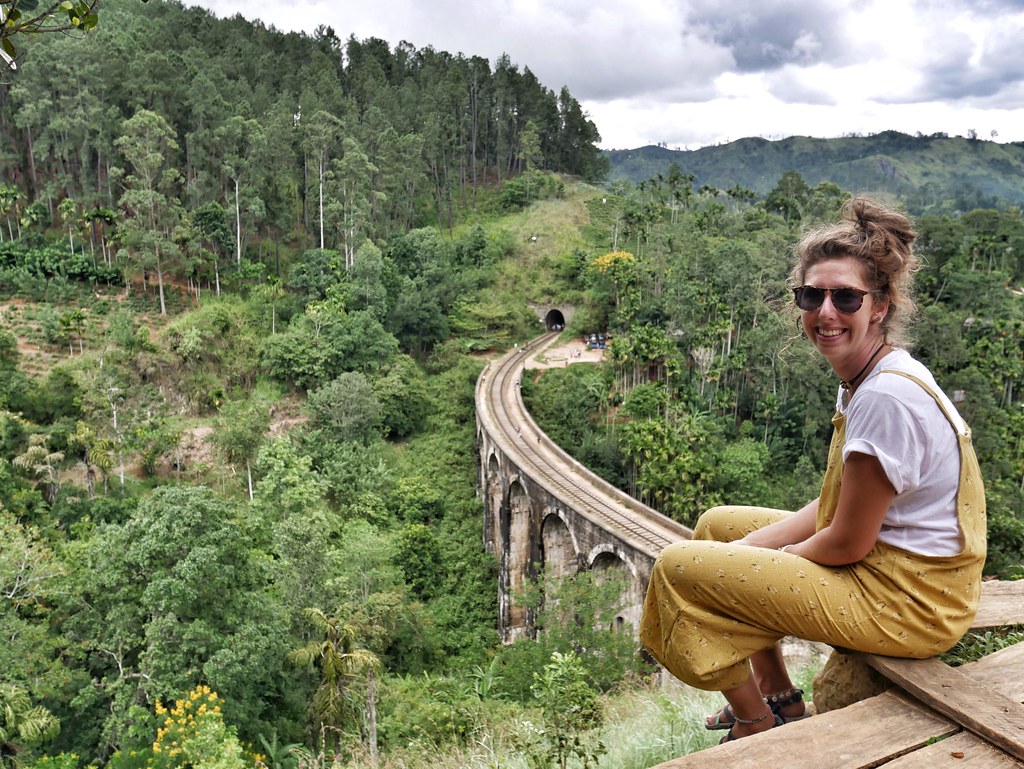 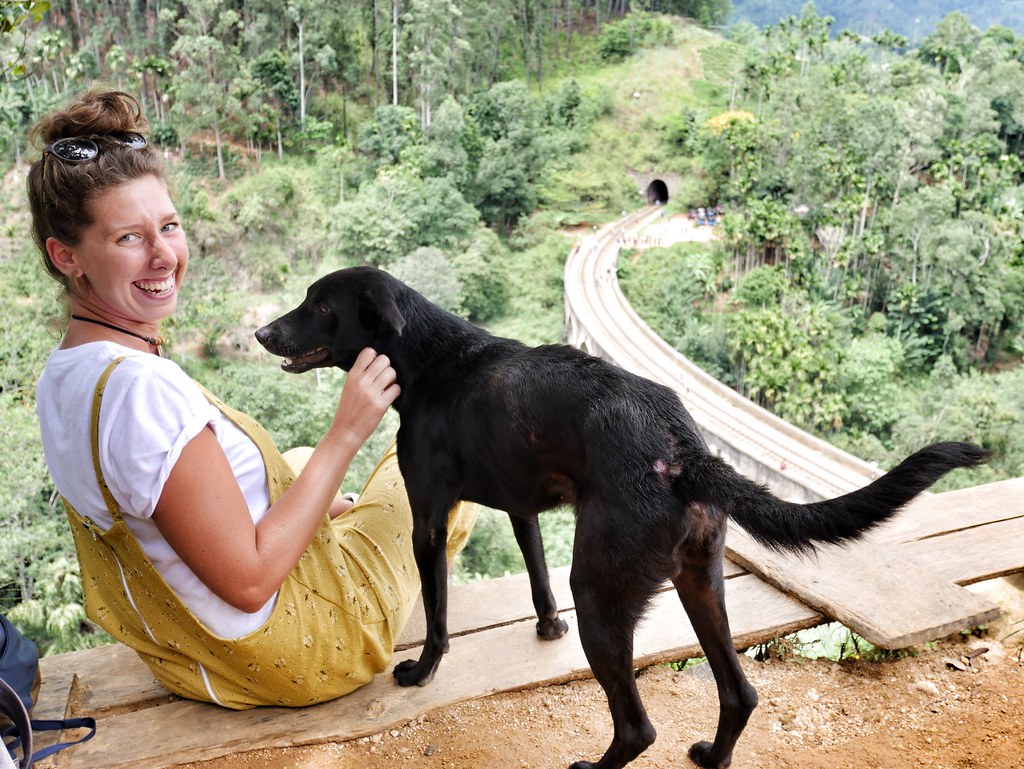 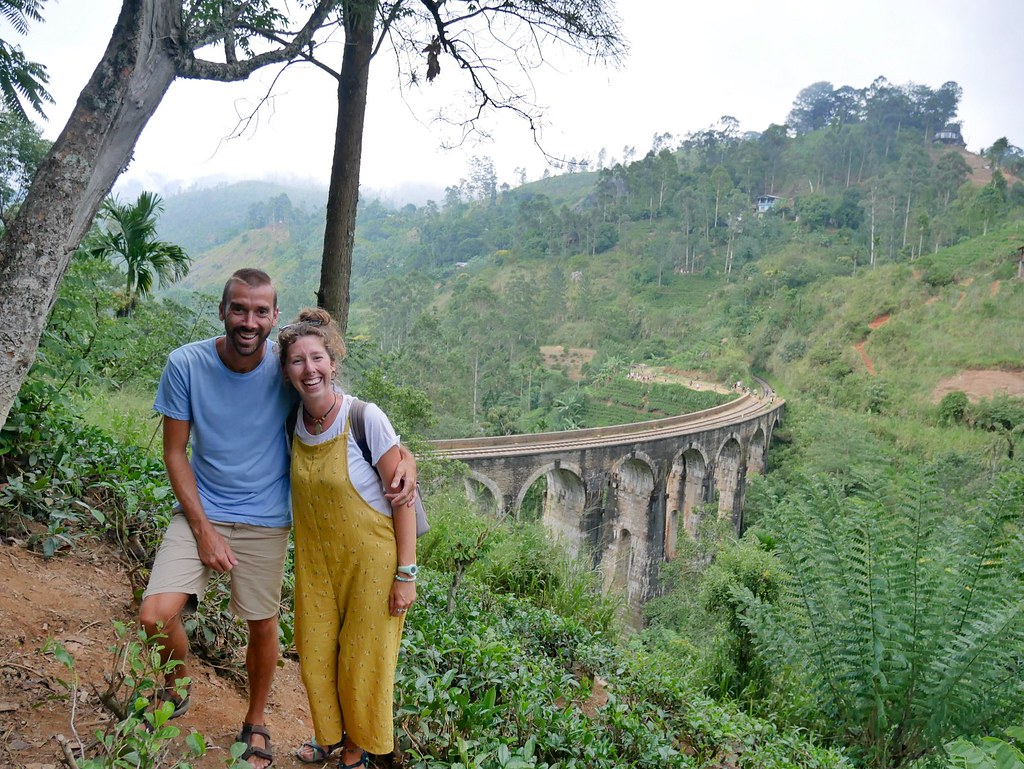 Everyday had a similar theme in Ella, a bit of sunshine in the mornings and then by the afternoon clouds rolled in. Mist would sweep right past us, cooling the air instantly and rain would fall in heavy downpours. The roads would quickly flood, especially the one leading down to our homestay. It turned into a river, ankle deep, wild with torrents and the colour of chocolate milkshake. Due to the weather we had to make sure we started any hikes in the morning. We really loved Ella though, not just because of the relief of the cooler climate up at 1000m elevation, or the stunning scenery that surrounded us but because of the delightful homestay we stayed at. There was only one room and it was spotlessly clean, plus we had a terrace outside just for us where breakfast was served everyday. It was the biggest and best breakfast we’ve had in a long time, the host was a domestic goddess giving us savoury pancakes with a Dahl and coconut mix on the side, steamed coconut rice flour things whose name I don’t know, banana pancakes, coconut pancakes, half a gigantic avocado (picked from her garden) and always four different varieties of fruit. She even gave us a box to take leftovers for lunch, so it was easy to fall in love with the place and we ended up spending maybe too long in Ella, split with a visit to Arugum Bay in-between we spent 10 days there. We had a lot of planning to do for our onward destinations though so it was time well spent. 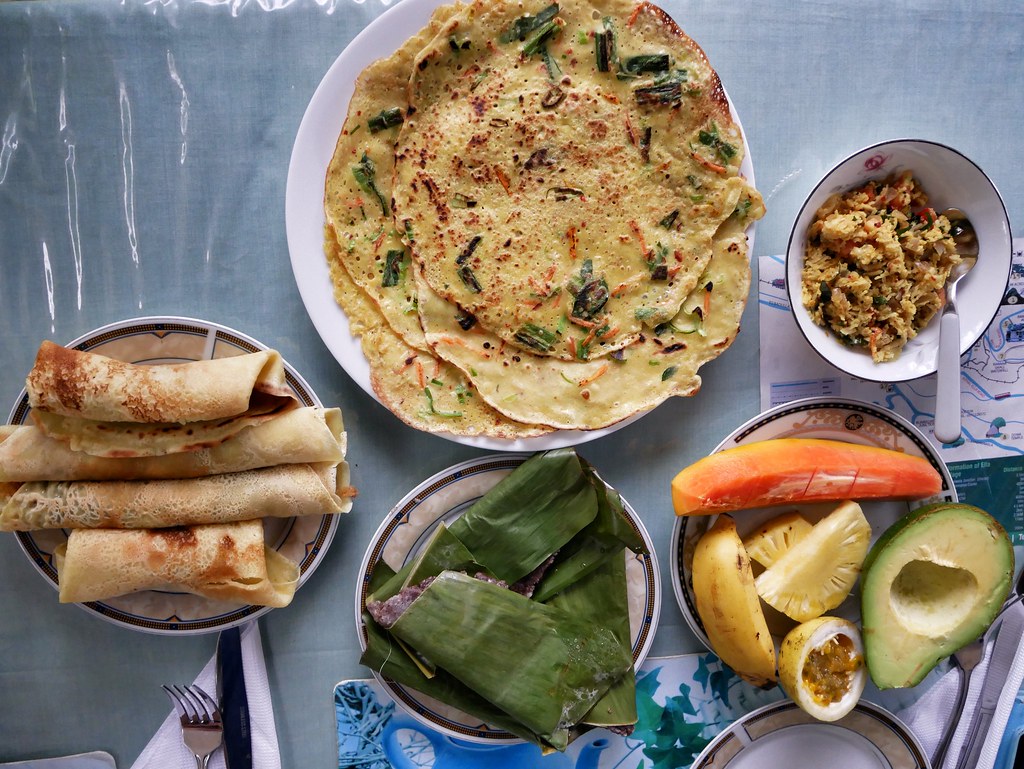 Another great thing we did in Ella was a hike up Ella Rock. Some say you need a guide for this hike but we just used our trusty maps.me app which worked a treat…even if it did send us on a couple of wild goose chases. Actually I think we misunderstood the shortcut our host recommended and we left Ella on the zig-zag road, going steeply down the switch backs and wandering why we were losing so much elevation before a climb. It clearly wasn’t the right way and of course we had a massive climb back up, in fact our route took us via hundreds of exhausting steps. It wasn’t very fun but eventually we made it to a plateau area and it was only then that the actual climb began. So we gave ourselves quite a workout but a couple hours later we reached the rocky outcrop with sheer drops on three sides. 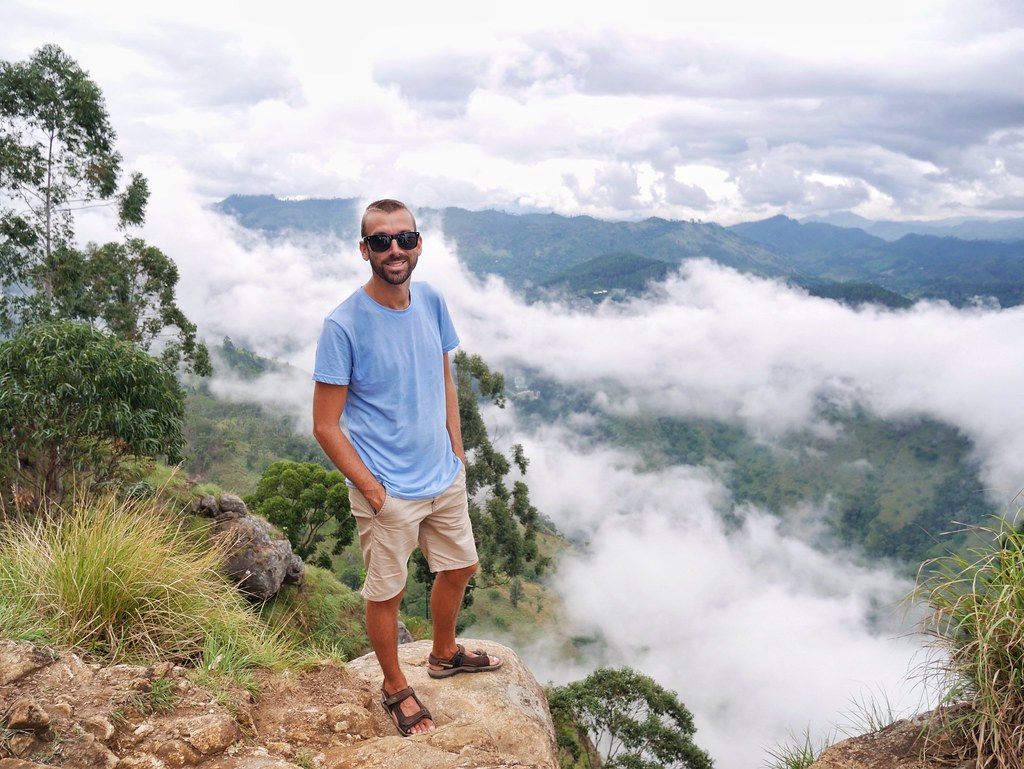 I was gutted as the clouds had already begun rolling in, we’d missed the good weather, but I was wrong, the clouds were a blessing and looked so wonderful swooping below us in neat lines. The view was really incredible and I actually think we wouldn’t of been so blown away had it of been a blue sky day. We enjoyed our leftover breakfast at the top and made our way back down to Ella, taking the regular route this time like everyone else. That was until we came to a cross junction (there are no signs for this hike) and we looked at our maps.me and picked what looked like the most direct route, heck, it might even be a shortcut we thought. Well, you guessed it, we picked the shittiest of routes again but we’d committed to it and it just got worse and worse. It was barely a trail anymore, it had been taken over by the jungle but there was a small archway to do an awkward running crawl through. It was the perfect place for a snake or spider to hang out but we didn’t have time to think, we just wanted to get the hell out of there so with our forearms ahead of us acting like a shield we ran and we ran until we reached a river. It was just a shallow one so we crossed it and sunk in the silt, then we sunk in the mud of the farmers trails and THEN we saw a couple we’d overtaken, walking along a bridge to our right like they were just strolling through a city park. We must’ve looked like rambo coming out of the jungle covered in mud, cuts and three more leaches clinging to us. We thought about swimming in the waterfall below the bridge but we couldn’t bare another leach so we left, feeling a bit embarrassed about our route options for the day. 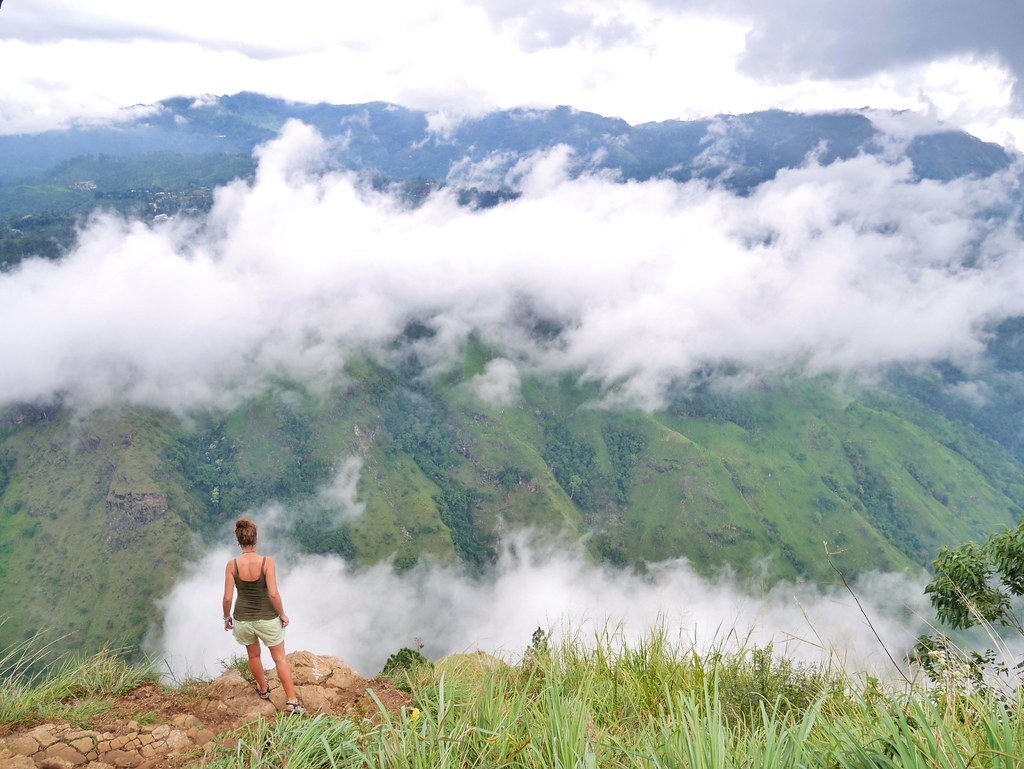 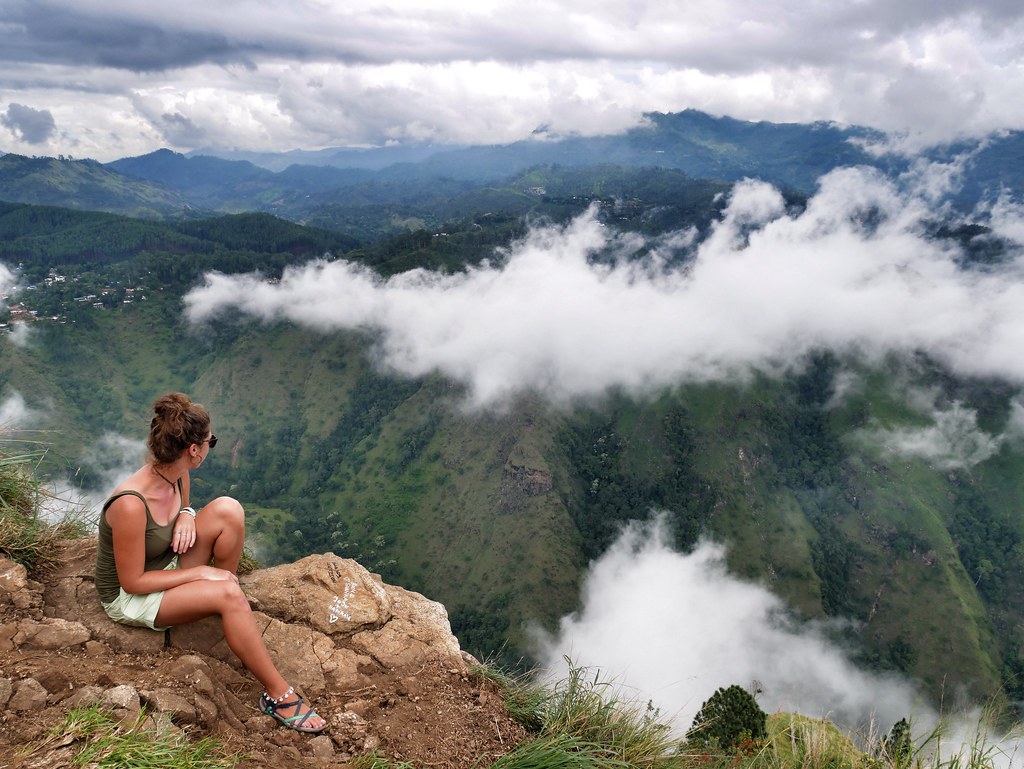