We kept reading that Sri Lanka had idyllic white sand beaches with turquoise water but we were still yet to find one. Our last chance of finding one along the south coast was at Tangalle. The owner of our homestay told us about the horrific tsunami that swept over much of Sri Lanka in 2004 including Tangalle. After years working on cargo ships and seeing over 30 countries he settled down with his family in a quiet residential street of Tangalle and built a brand new, two-story home. Soon after completion the tsunami came. Family and neighbours ran upstairs and watched the disaster happen before their eyes. It wasn’t the sea that came their way, it was a wall of black river water that took out everything in it’s tracks. All of the windows and doors of his house were smashed in, any possessions small enough to fit through the gaps were taken away, including 30 years worth of souvenirs from around the world. He told us this story from the same balcony where he watched it happen, pointing out houses nearby that had been flattened, and shocking stories like “a German tourist was laying dead in the garden over there”. They now have sirens and tsunami evacuation routes incase it happens again.

We headed to the huge beach which continued into the distance as far as the eye could see. The remote eastern area is where turtles go to lay their eggs. The sea was wild but they’d built some breakwaters to creat safer spots to swim. Craig enjoyed riding the waves but it was way too rough for me, plus it wasn’t a paradise beach by any stretch of the imagination. So we caught a bus about 5km west and just took random roads and jungle trails that led to curvy looking bays on our map, and boy did it work. 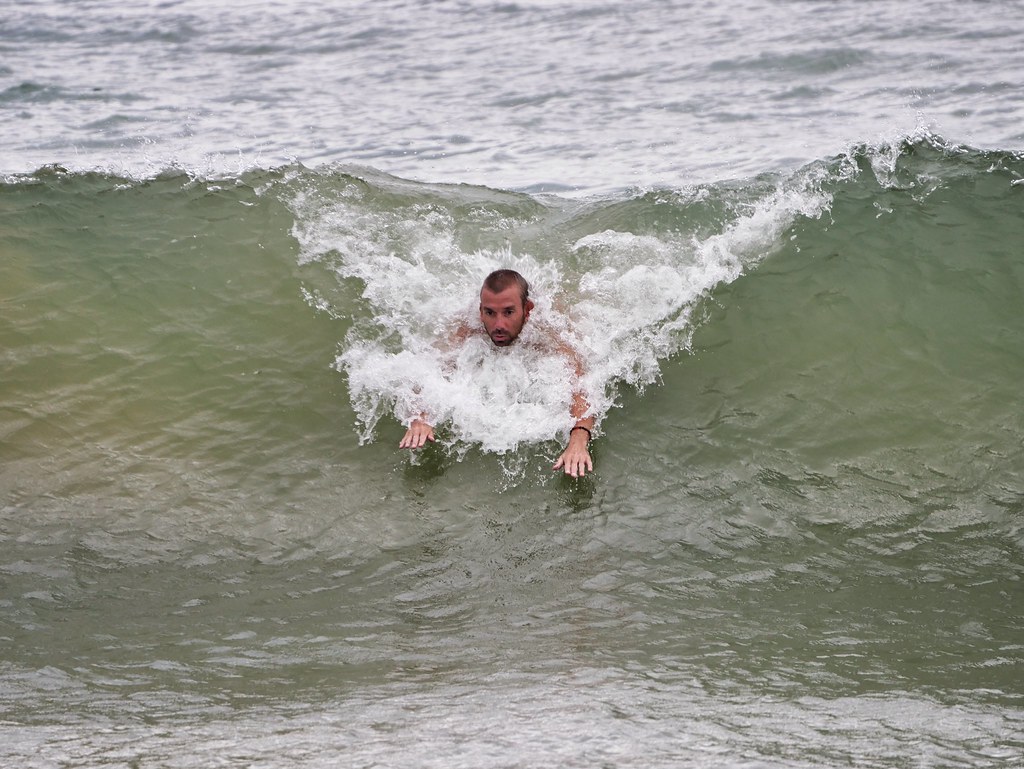 We stood high above the first beach and it was beautiful with just one person there, a local man spear fishing in the sea. We continued onto the next beach and it was even nicer with a curved bay and jungle backdrop. The sea was probably as turquoise as we would find in Sri Lanka, and Craig ran straight in. There was a small guesthouse but it was empty in the off season. A local guy tried to entice us to buy a coconut and he bravely climbed up a thin palm tree, it was incredibly high, maybe 15m and he cut down half a dozen coconuts which dropped to the ground with a heavy thud. We walked along the empty beach and contemplated staying there the rest of the day, but it was still early and we didn’t want to miss any other beautiful beaches so we continued exploring. 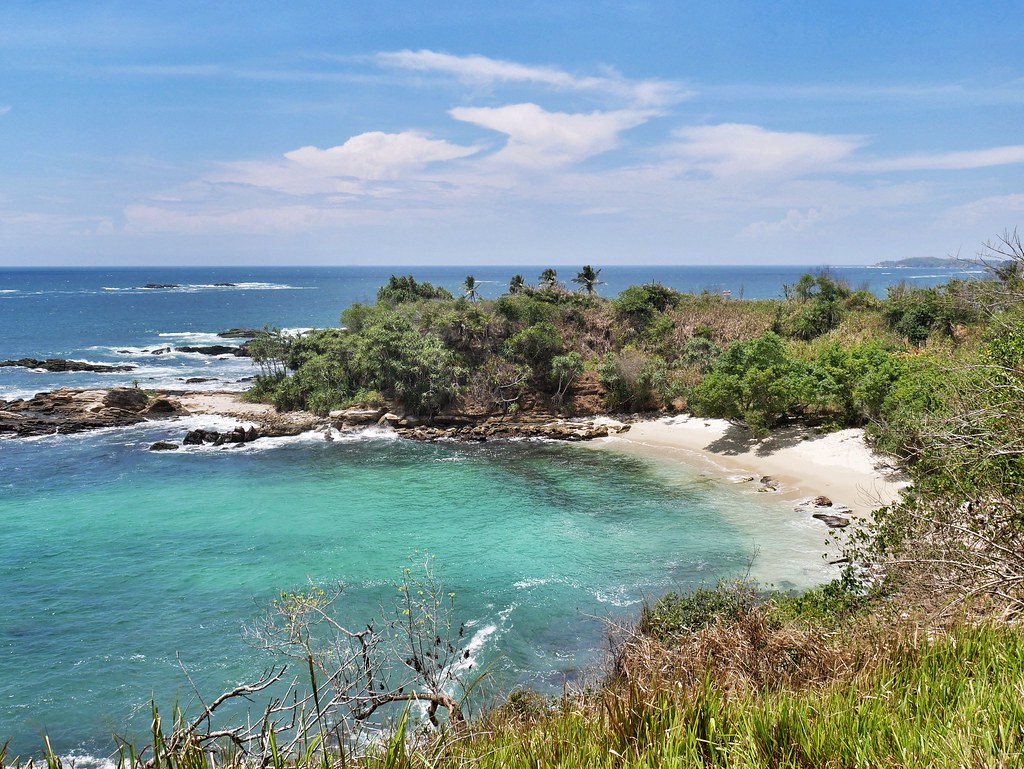 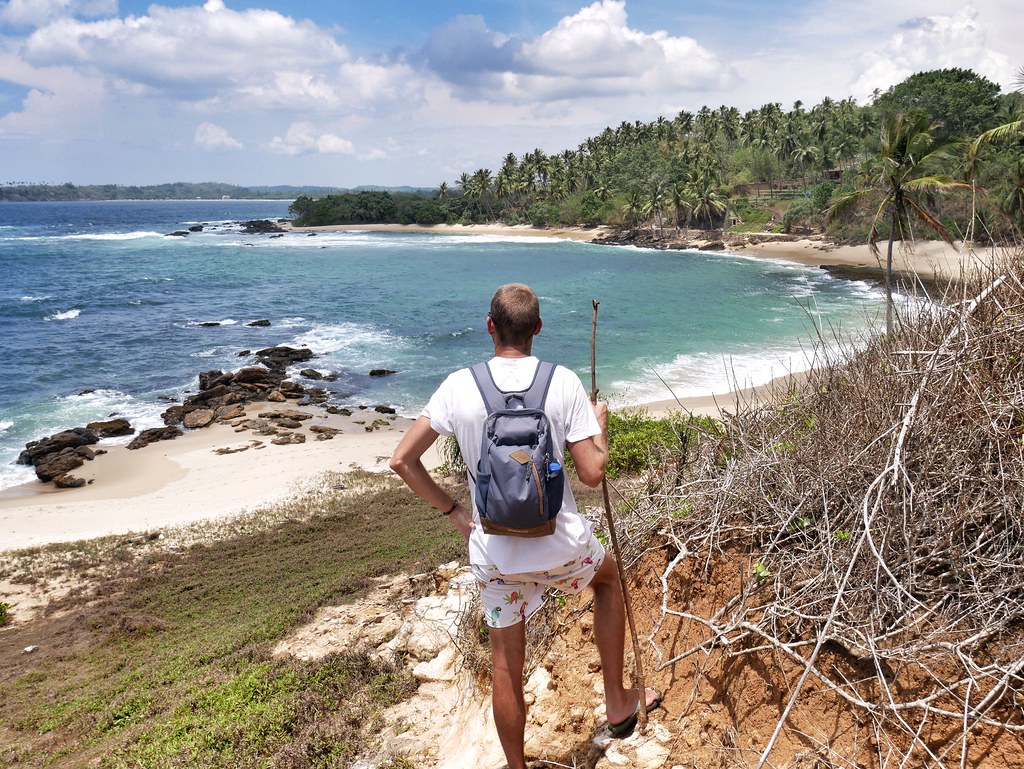 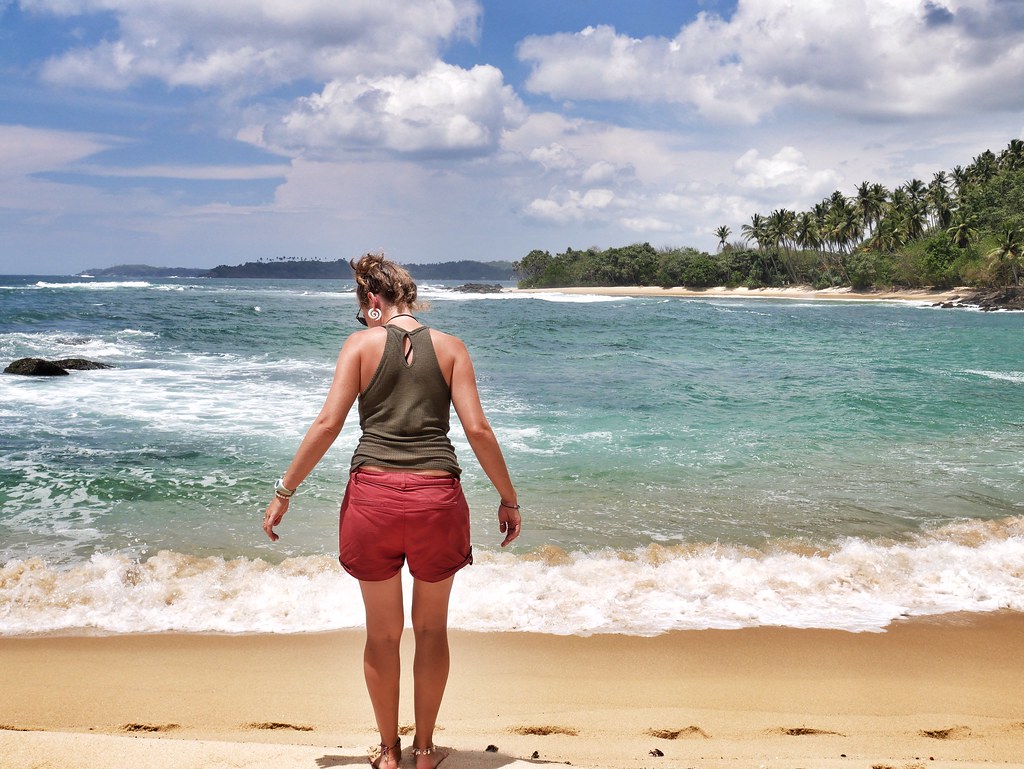 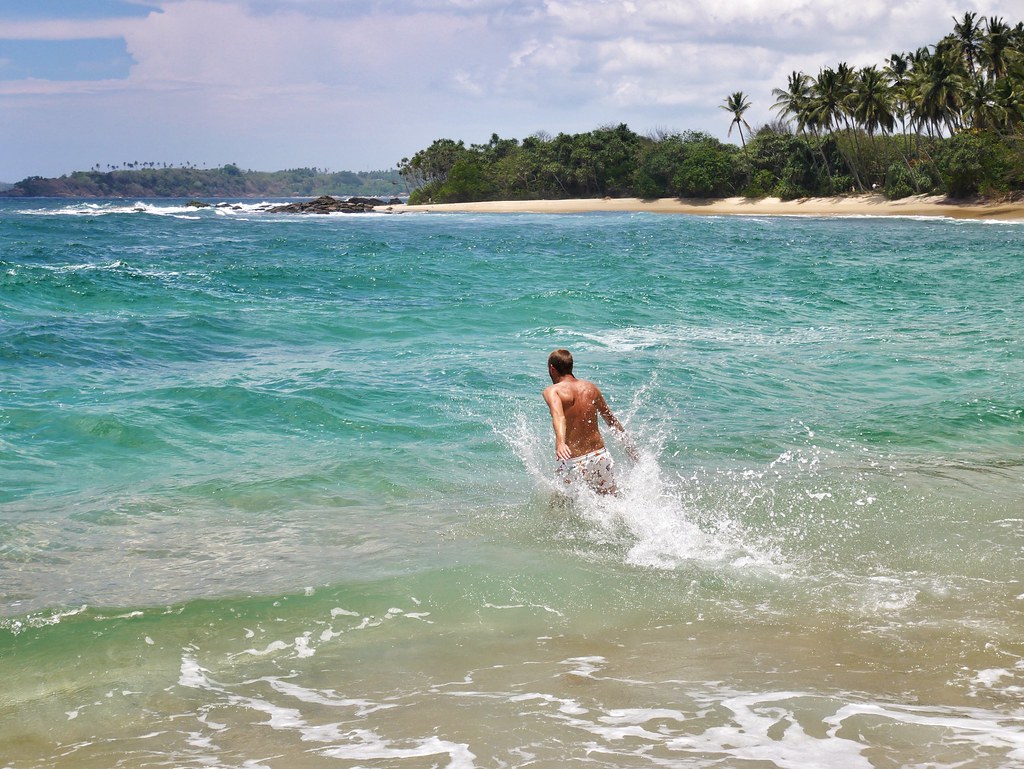 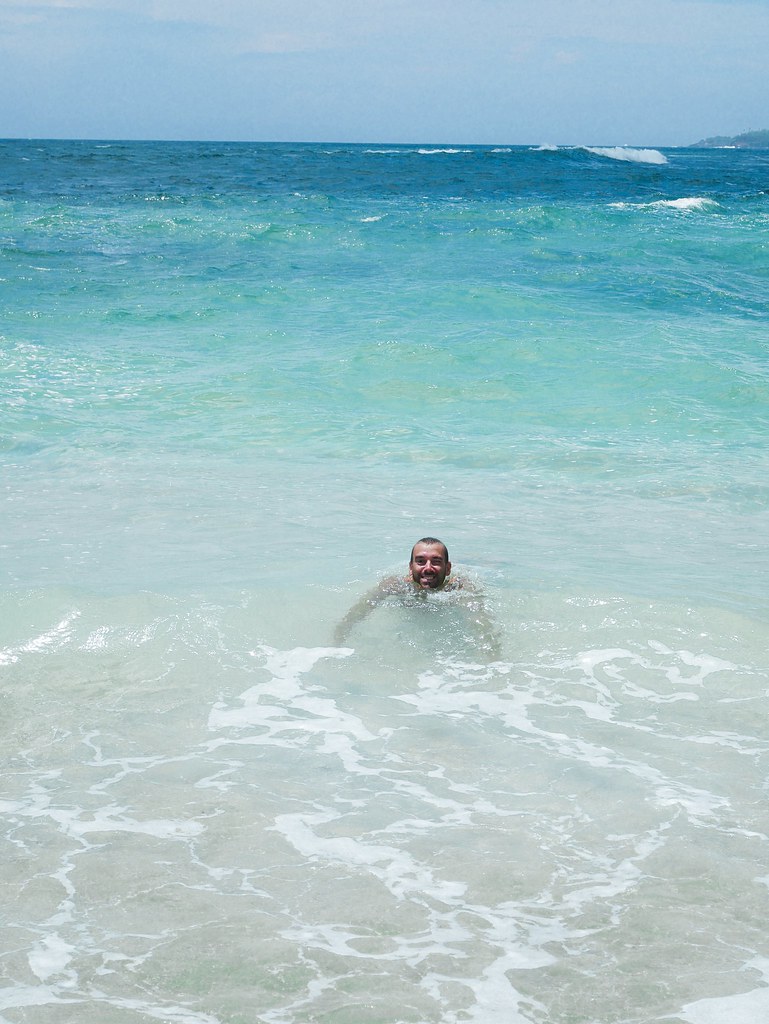 We ended up at a remote looking beach backed by hundreds of palm trees. There was a resort hiding at the back but it wasn’t visible and there didn’t seem to be any guests, it was just us there. A rustic cafe with swings hanging from trees sat at the far end of the beach and we got some young coconuts, fresh from the tree to refuel ourselves on the hot day. The waves were crazy, rising about 2m and crashing straight onto the beach. We’d have a death wish if we swam there, so Craig enjoyed standing by the shore and running from the waves instead. There was also a rope swing attached to one of the palms but Craig declared that it was broken and unusable as it wasn’t swinging enough for him. So I gave it a go, running around in big, frantic circles until I picked up enough momentum to go airborne for a split second, leaving Craig laughing but undoubtedly jealous of my skills. 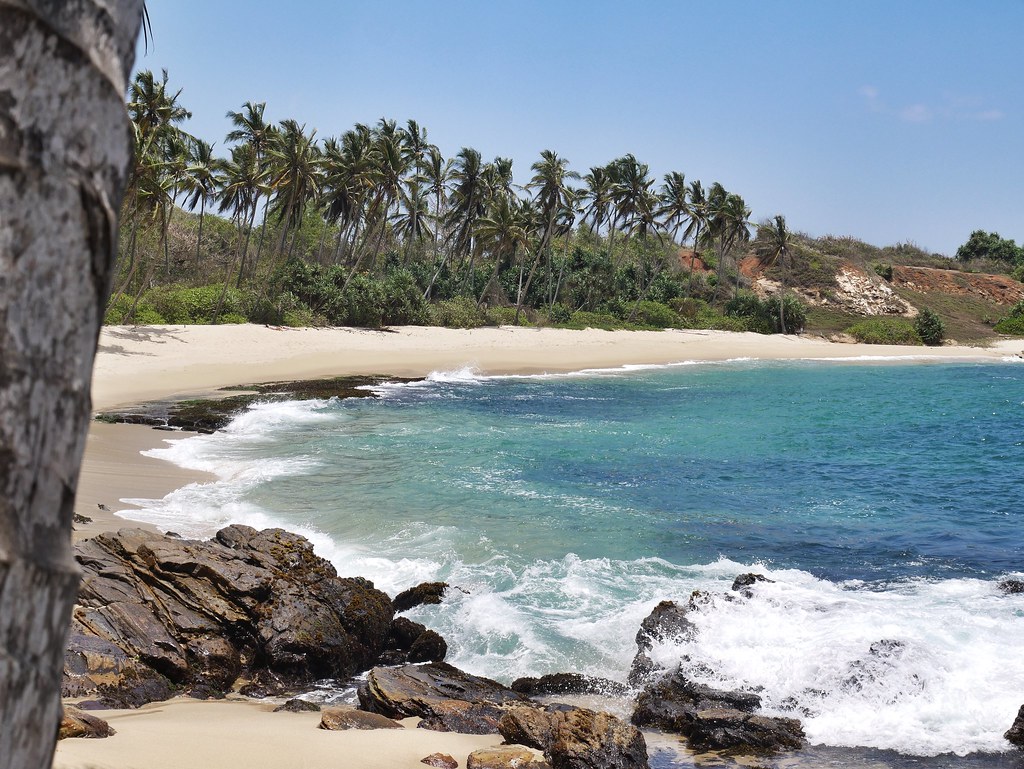 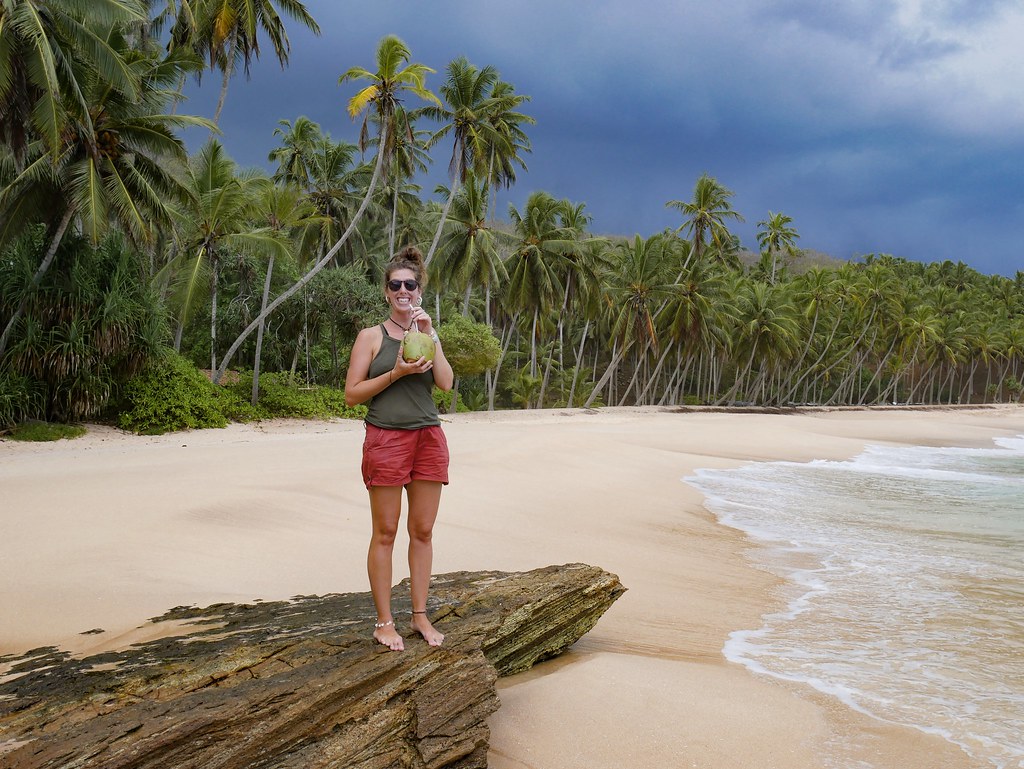 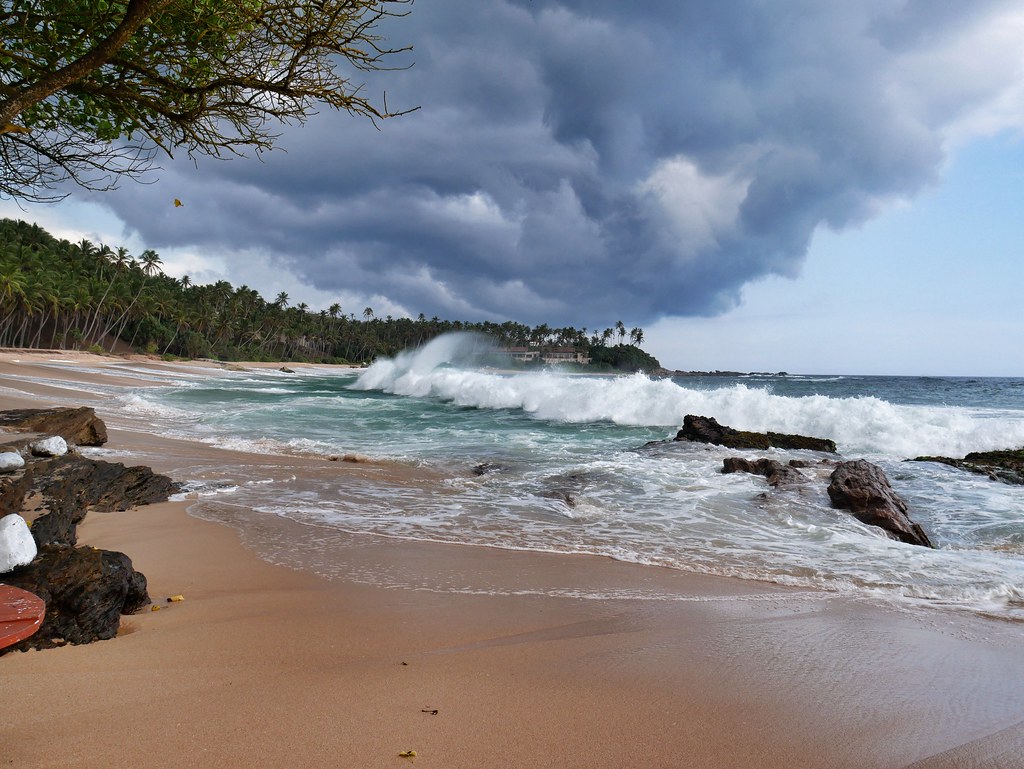 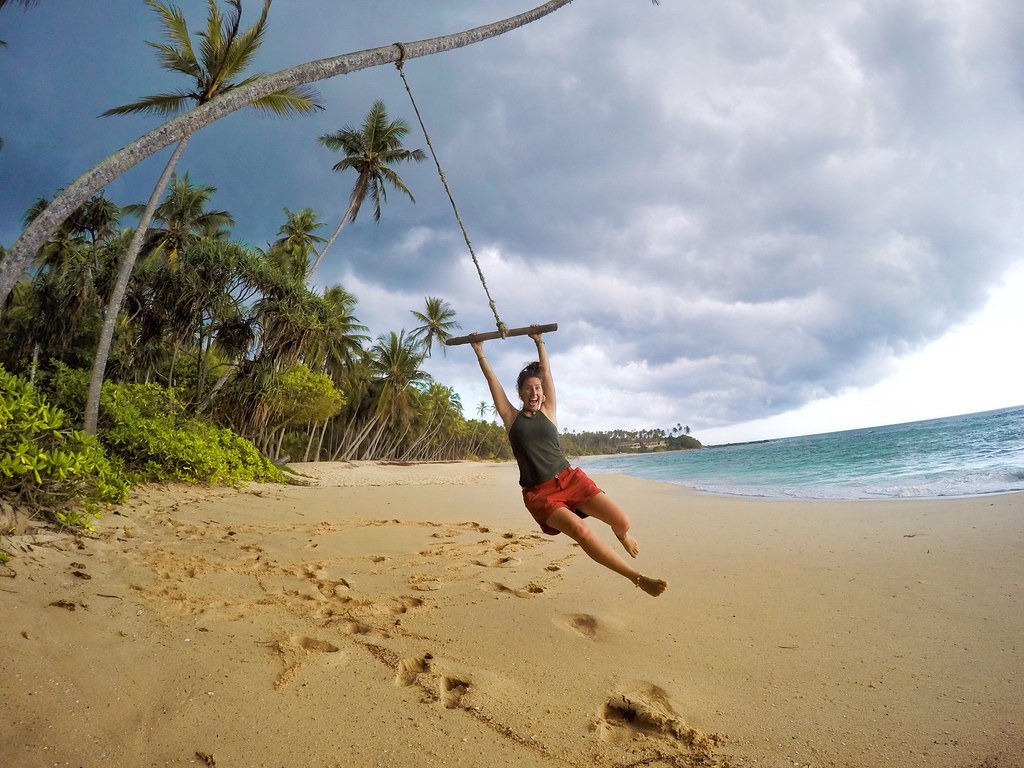 A big, menacing storm was brewing, a few heavy drops of rain plopped onto our heads and before we knew it it was like a river falling out of the sky. We took cover under a creepy tree but it didn’t help much and then we found ourselves crouched under two tiny tables at the back of the beach – for 45 minutes! We looked like a couple of homeless dogs seeking shelter. When the rain eased we walked further east to Goyambokka which is said to have some of the best beaches, but we preferred the other untouched ones we found. I still wouldn’t rate Sri Lanka’s beaches very highly, but we had a fun adventure to some off the beaten track spots. The main issue with Sri Lankan beaches is that the Indian Ocean brings in big waves and there’s only a handful of beaches with outlying reef which breaks the waves and creates a safe swimming area. It was time for us to leave the coast anyway, to go on a safari and explore the hill country. 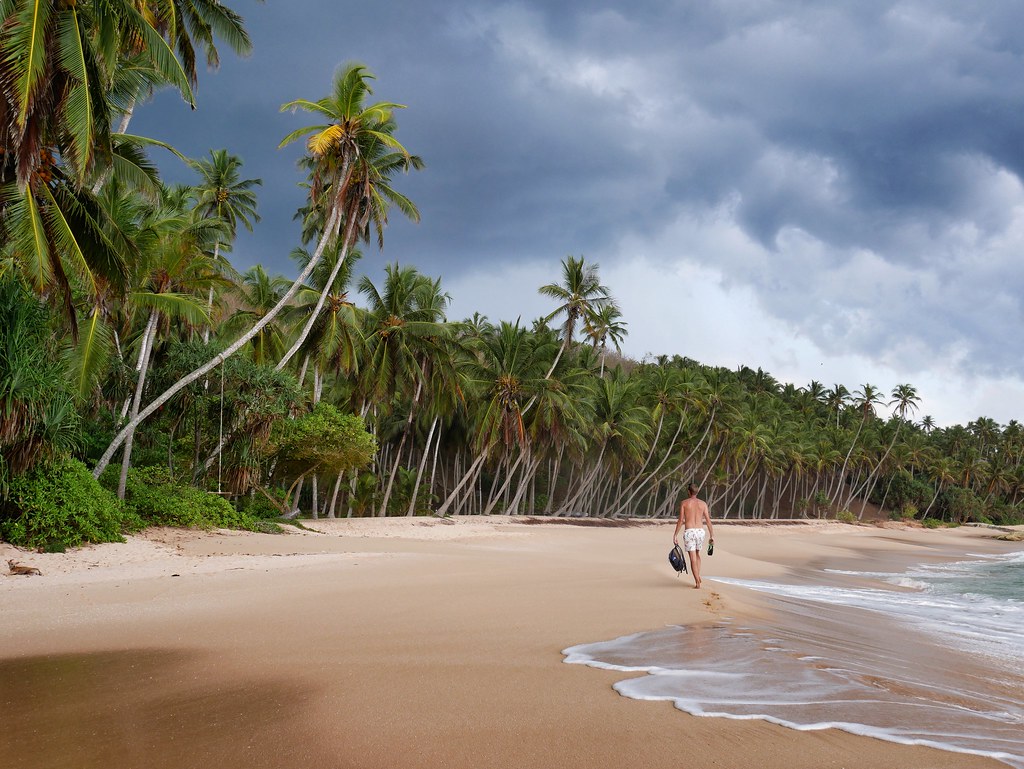 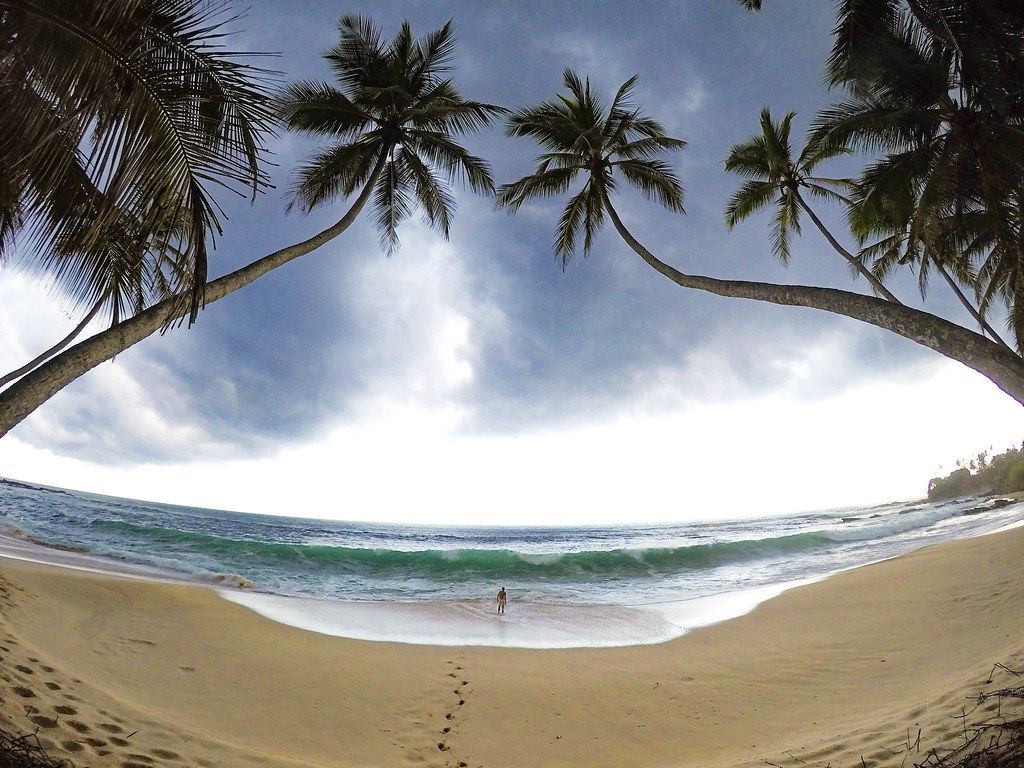