To the west of Mirissa is Secret Beach which obviously isn’t a secret anymore but it was still a very pretty spot. There were actually two beaches back to back, one totally calm and shallow with rocks and fish visible in the clear water and the other wild and wavy but with dreamy turquoise and blue patches in the sea. We went to the wavy section first but it was a bit of a challenge for a weak swimmer like me so I paddled back to shore, not wanting to put my feet down due to unknown rocks, but the tide retreated and I ended up laying flat on a rock and visible to everyone on the beach, just like a beached whale. 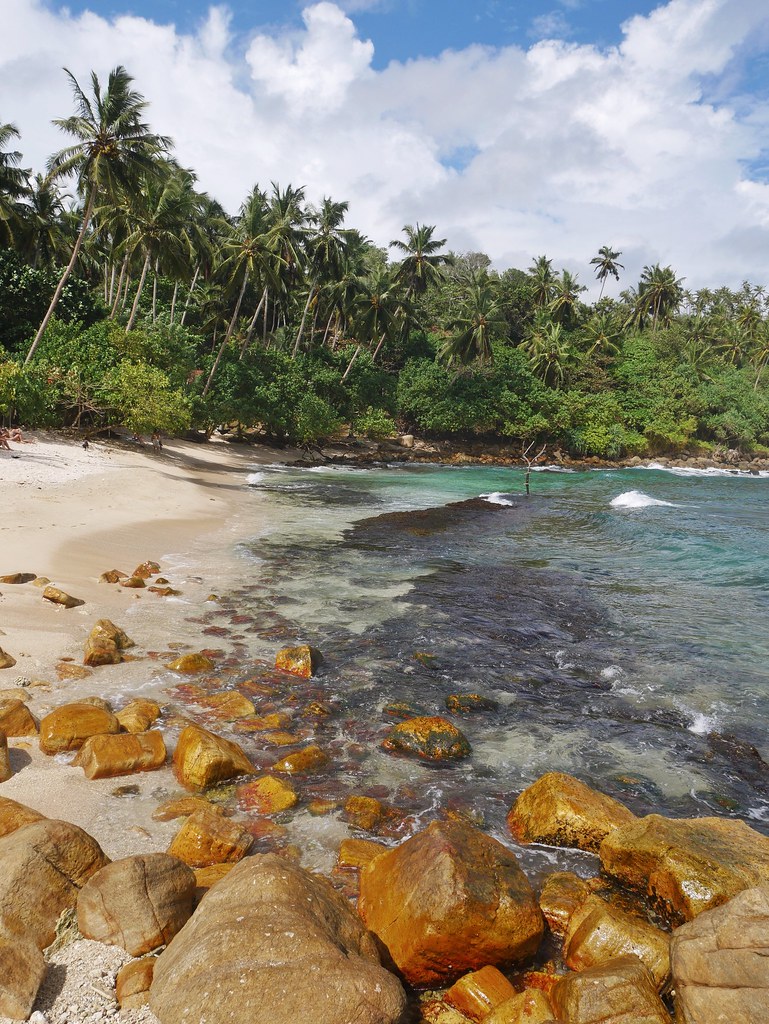 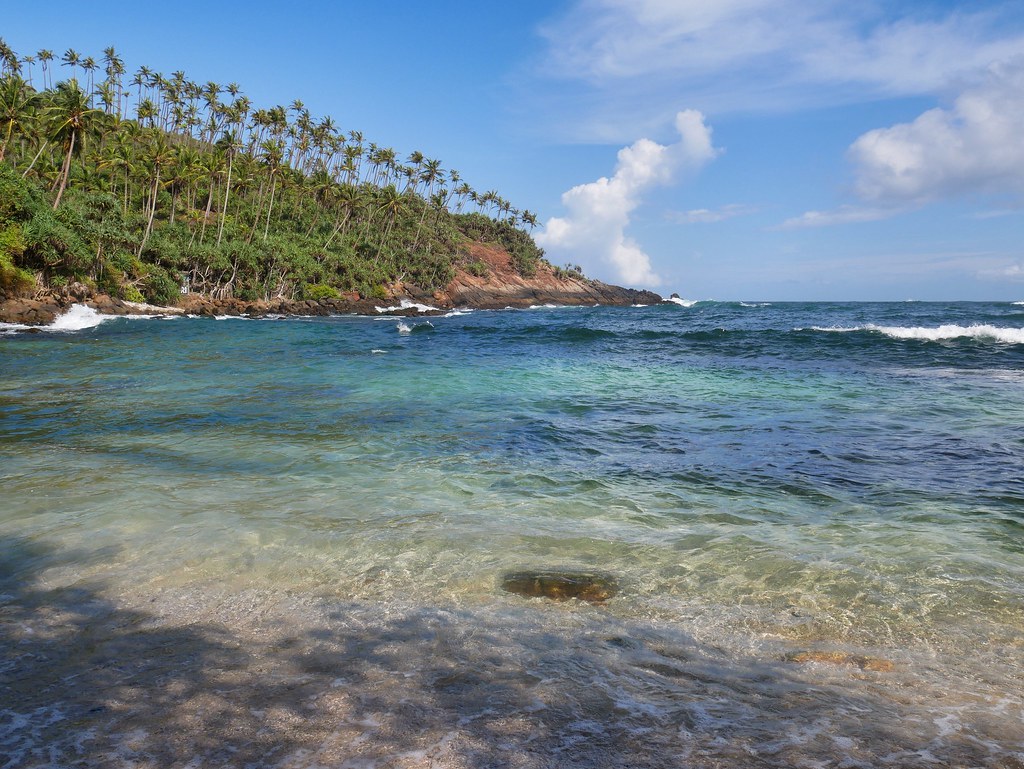 So we moved our gear to the calm bay which was too shallow to swim in but perfect to just sink our bodies into the cool water. There was an adorable juvenile dog that just collapsed and rolled over for belly rubs as soon as I stroked her so I pretty much spent an hour with her asleep on my lap enjoying cuddles. I was in heaven. An old black dog also sat near us, she was very chilled and rested her heavy head in my hand when I stroked her. It was lovely until another dog turned up and provoked the others. So they all became really playful and were fighting and peeing over a bit of drift wood. There were four dogs now and they were going crazy, running around and barging into us, they had absolutely no respect for our beach towel, the cheek! There was a lot of teeth showing and growling from all of them, even my puppy but then they’d play between curling their lips up and it was quite amusing to watch. The black girl seemed to rule the pack and she was even growling at a local guy who was innocently photographing the area. Then she boisterously bounded back to us and straight into me, it was just out of excitement, but I pushed her away and my thumb went into her open mouth. Her tooth dug into my thumb and left a raised area of skin…I hoped it wouldn’t draw blood but then I saw it, the faintest line of red come through. God damn. I haven’t had any rabies jabs so after watching the sun set we rushed back and I googled rabies. 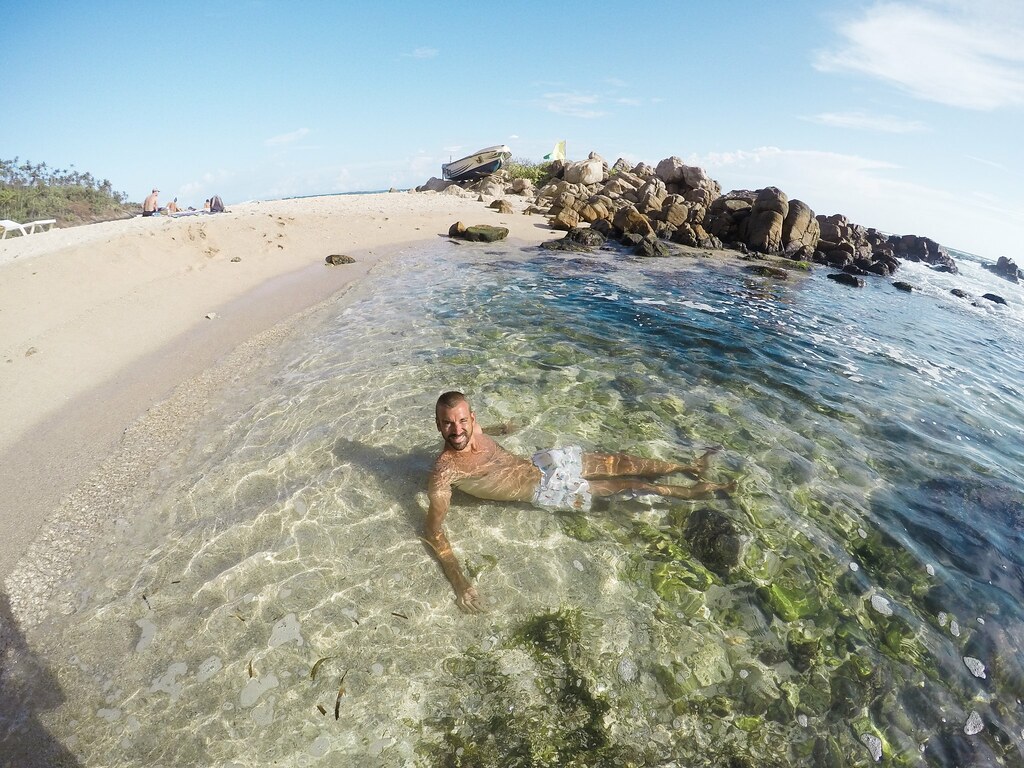 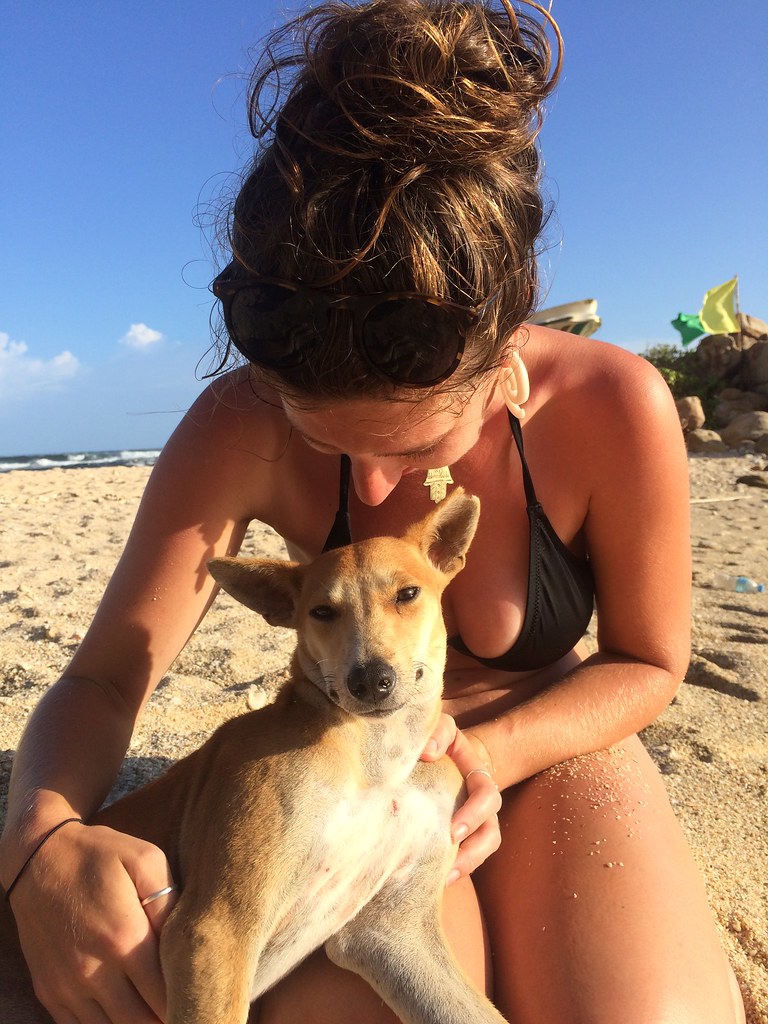 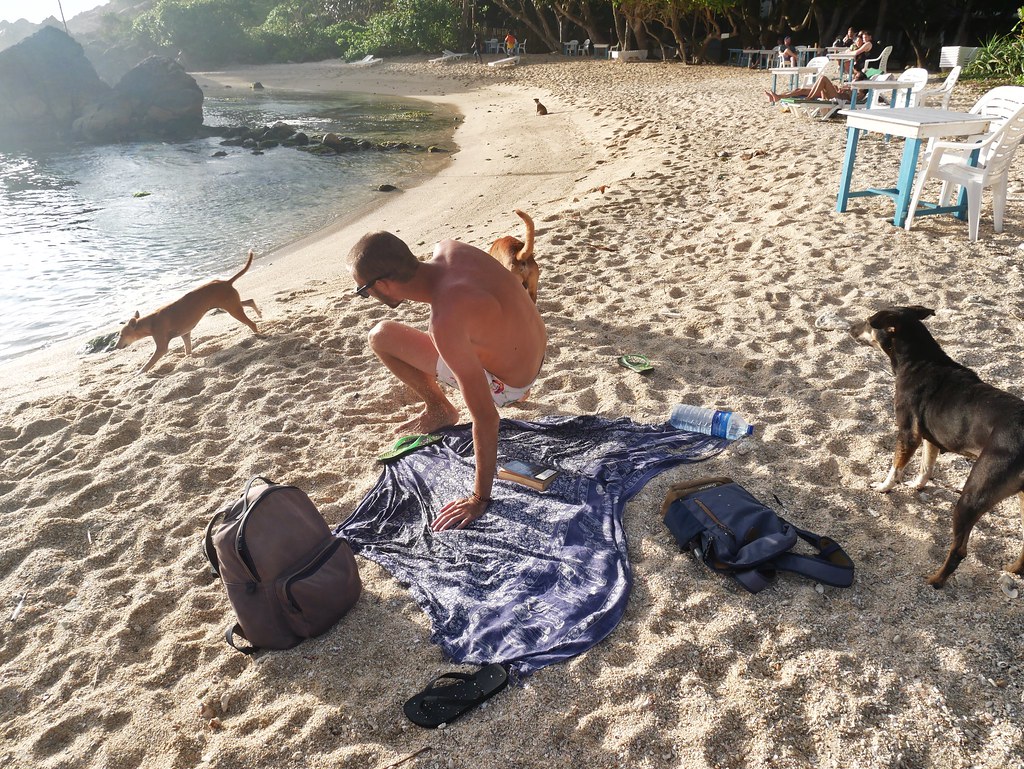 It didn’t look good, rabies is a huge problem in Sri Lanka with 1000 people being bitten by dogs every single day. I found out a lot that evening and I was so pissed off with myself. Depending on where your bitten it can take between a few days and a few years for you to get the symptoms. The rabies cells work their way to the brain which is when the symptoms start. The problem is as soon as you get the symptoms you only have a few days to live, no one has survived rabies, it’s 100% fatal. 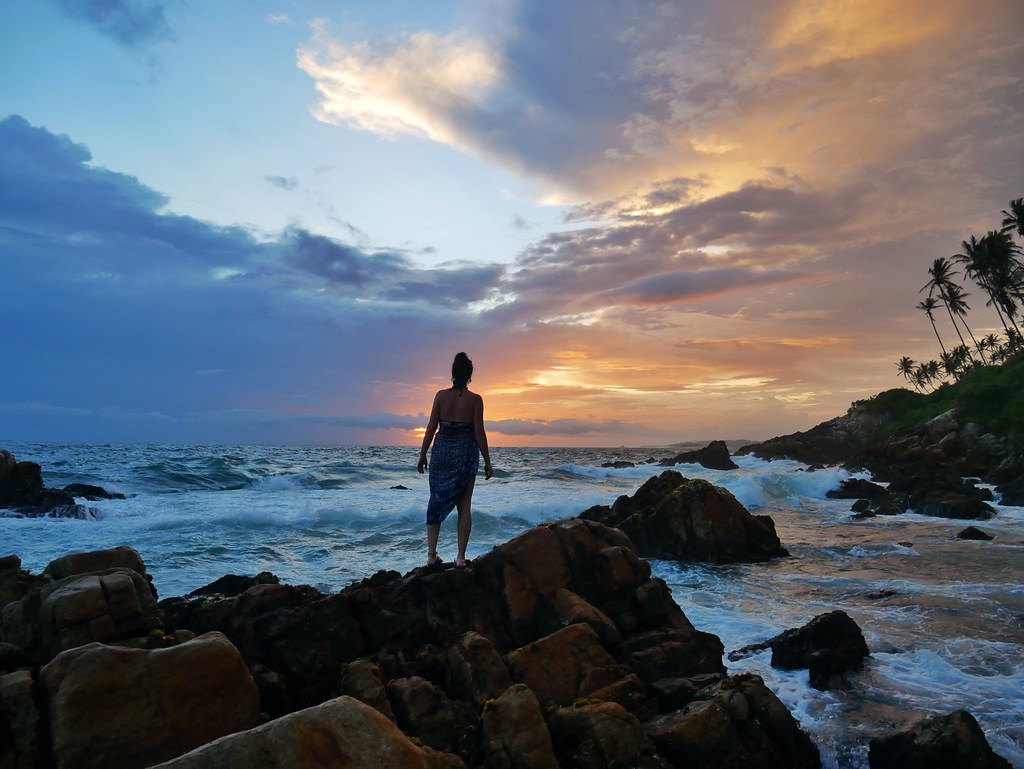 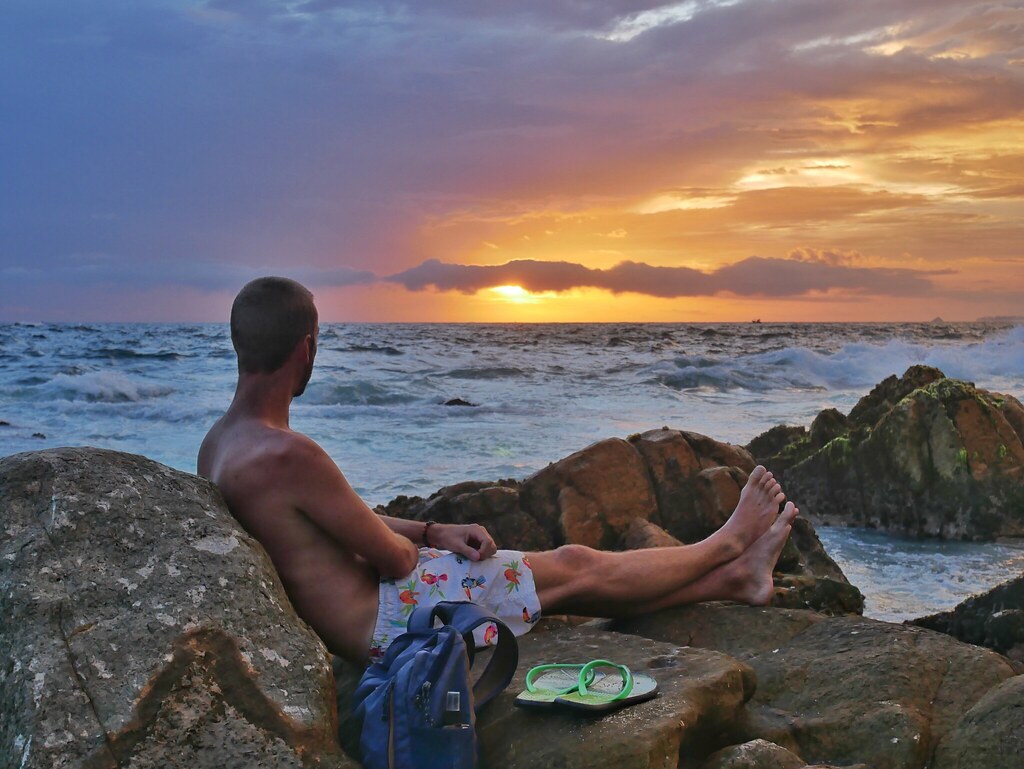 I was feeling very uncomfortable reading all the facts. When Sri Lankan researchers scanned the heads of biting dogs once they’d passed away, they found that about 60 out of the 90 dogs had rabies. I also read about a French kid who was bitten by a puppy while on holiday with his family in Sri Lanka and he died a few months later in France from rabies. The symptoms sounded bloody awful, fever, paralysis and a serious fear of drowning which is related to the symptom where you lose capability of swallowing, hence always picturing a rabid dog foaming at the mouth. I’d already choked on an abnormally long piece of mozzarella on my pizza a few nights before and that was scary enough. The good news was that once bitten you can still get the vaccine and prevent getting rabies. The bad news was I needed to visit a hospital three times during my stay in Sri Lanka to get the full course of jabs.

The next morning we caught a bus to Matara General Hospital, I was really nervous, I hate injections and I hate hospitals. I didn’t know how sanitary they’d be, should I buy some injections from a pharmacy for them to use? Also the idea of sitting in a crowded hospital waiting hours to be seen and surrounded by germs and sick people sounded bloody awful, but I had no choice. Luckily there turned out to be a specific Rabies Unit and I was the only person waiting to be seen. I was asked for my name and age and then led to the consultant. He was a man of few words, but he did have some good news, because it was such a pathetic bite I didn’t need the immunoglobulin injection so I was relieved as it would of been injected directly into my thumb. Instead he said I needed two rabies vaccines in my arm today, one more in 7 days and a final one in 21 days, on the day that we leave the country. A plump lady with an old fashioned white dress and white socks pulled up as high as they’d go, led me to a counter to pay for the jabs. Bit of a shame as locals get it for free but luckily it only cost me $18 for two vaccines. It was funny how everyone had little jobs, a new lady wrote my details down and the final lady gave me my injections. Much to my relief it was very well organised with sealed new injections. I could feel the liquid going through my arm and it instantly turned heavy. Seeing as I had a jab in each arm Craig thought it would be funny to do an impression of me with limp arms swinging them from side to side like a monkey which made the whole room roar with laughter while I shed a tear from my phobia of needles. As we left the room I turned to say goodbye to the first lady that helped me and then I saw a big dog was casually asleep in front of her desk with the rabies unit sign above, the irony was not lost on me. The whole process took less than thirty minutes and we were back on the beach by lunch time. 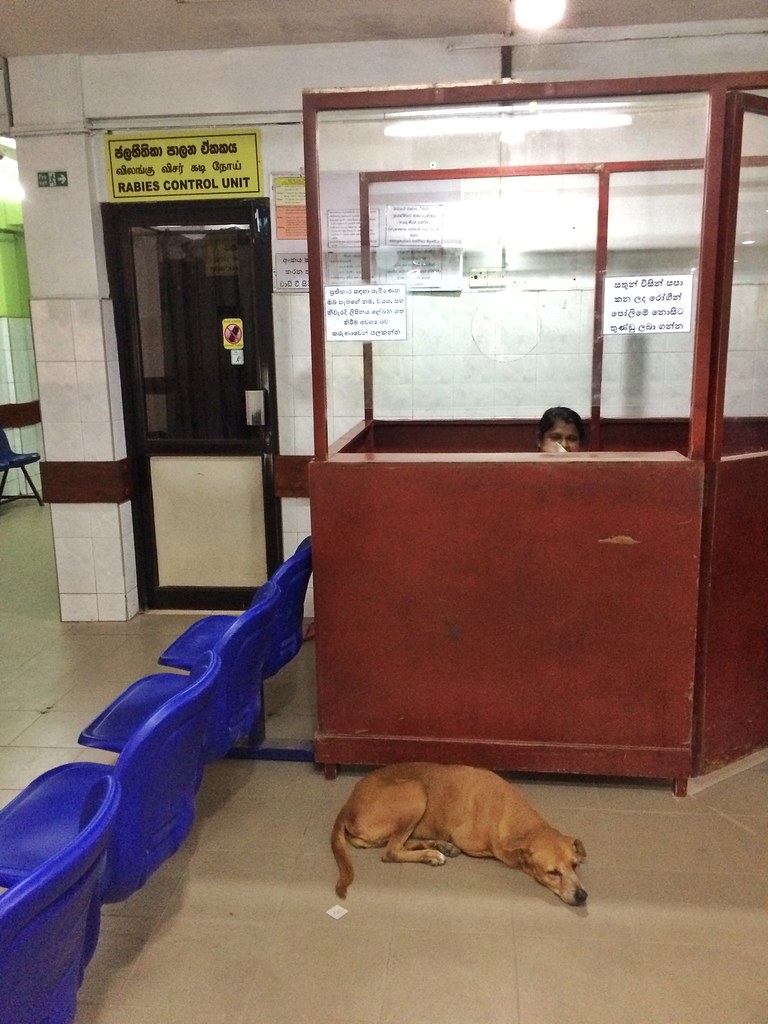 Seeing as I’m behind with blogs I can update you on my final hospital visits. Almost every hospital in Sri Lanka has a rabies unit but my day always fell on a Sunday so I made sure to call ahead and check the hours. My day 7 jab was given at the government hospital in Embilipitiya which I had a nightmare trying to pronounce. A big queue to reception led out the front door yet the sweet staff spotted us and took us to the front of the queue. Then we had to wait in a crowded hallway but before I sat down I popped my head in to ensure they were using the exact same vaccine that I’d received in Matara. After a few nervous glances amongst the staff they confirmed it was the same, and then there was lots of drama and chit chat about what dosage to give me so they even went to the effort of calling Matara to confirm the amount. Then I was quickly sat down and injected, told to wait 20 minutes in case I had any side effects and then we were on our way, and this injection was free. We were very lucky that they saw to us first as lots of people were waiting, but I was relieved as we had to travel for two hours to get this injection before continuing on the days long journey to the hill country.

The final jab was in Negombo, which was by far the grottiest looking hospital. The outside was in such a state that it looked like it had been closed for years with peeling paint and scaffolding holding the whole building together. But it was open, and just as we entered a workers lorry slumped a young women onto a metal tin of a bed and hospital staff wheeled her in. She was limp and unconscious, blood spilling from her leg onto the basic tray and then two dogs followed her in so the staff member at the back was having to kick the dog away whilst pushing the patient. Bit of a scary sight but I was quickly put at ease when a group of sari dressed volunteers arrived just as I did and whisked us away to the rabies unit. They were very happy to help tourists and even though I was walking right alongside one lady she said “come along now” as if I wasn’t keeping up with her speed walk. The two nurses in the rabies unit were dressed in very old fashioned nurse uniforms. One had a massive hat on, basically like a piece of A3 paper clipped to her hair and standing high up. The lady that injected me seemed to be very clumsy and sleepy, the needle tip went precariously close to her skin but thankfully she put a fresh needle on. Then she went to inject me without wiping the area clean so I quickly prompted her to and she just wiped it with a bit of dry cotton wool. As we left the room a queue of people awaited injections, I’d arrived early and been the first patient of the day. I guess it would of been weird if I hadn’t seen a dog in the hospital for my final visit, so of course there were two right outside the rabies unit, just strolling around the premises.

So, I’m free from rabies, and should I be bitten in the future I will have a better defence against it, but I will still need to get injections, just not as many, and it would give me more time to get medical attention should I receive a bite in a remote area of the world. I’m certainly more aware of the risks involved in stroking stray dogs now, especially the most adorable puppies as their teeth are like razors. But I still love dogs to bits though.