Mirissa is a hip beach town about an hour away from Unnawatuna. It’s the perfect place to kickback and relax but its also a great base to see the worlds largest mammal – The Blue Whale.

To see the whales we needed to go on a boat trip which cost about $30 per person and we were picked up by a tuk tuk at 5:45am and taken to the boat office. The double-decker boat probably seated about 50 people yet there were only 8 of us onboard plus four staff members. We were the first boat out the harbour and Craig got his book out for the hour trip to the deep sea where the whales feed. He barely read the first sentence before he realised it wasn’t going to be a leisurely ride. In fact it was the roughest sea we’ve ever experienced. It was a crazy ride and it felt like we were lost at sea. Sometimes we hit the waves side on and I thought the boat would topple sideways as we were face to face with the grey sea. On top of that a big black cloud grew around us and then it absolutely pissed with rain. There was a roof but no sides to the boat which was unfortunate as the rain was blowing in sideways so we were all drenched. 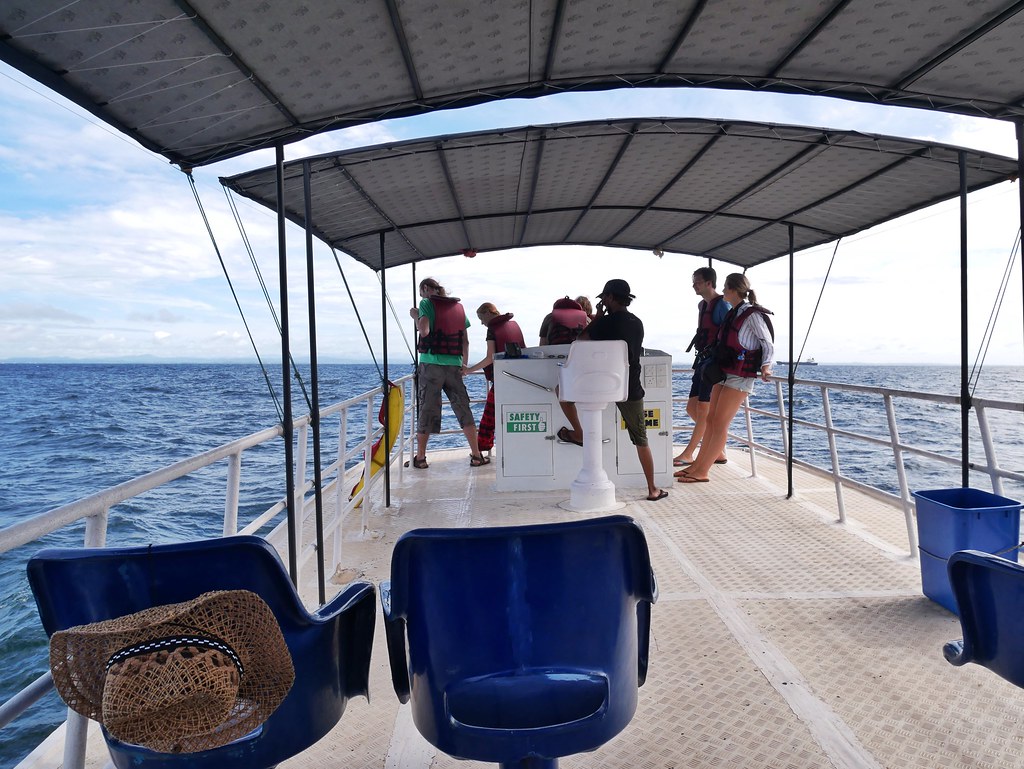 The staff did an amazing job though and handed us all breakfast which was quite the challenge to eat. Then they cleared our plates and had to stand still as we rode up a wave and then do frantic little steps down the slanted deck as we crashed back down. We passed a fin whale on the way and then we reached the deep sea. Ahead of us were three water spouts rising from the sea – the tale tale sign of whales so we knew the blue whales were close, and best of all there were multiple ones. We were all told to go up the front of the boat, it was a challenge in itself, having to cling onto the guardrail and it was almost impossible to release a single hand to take a photo. I had one arm wrapped around a pole while Craig stood around me so I wouldn’t fall – it’s only when I reencounter this memory that I realise we unintentionally looked like the most awkward reenactment of Titanic. 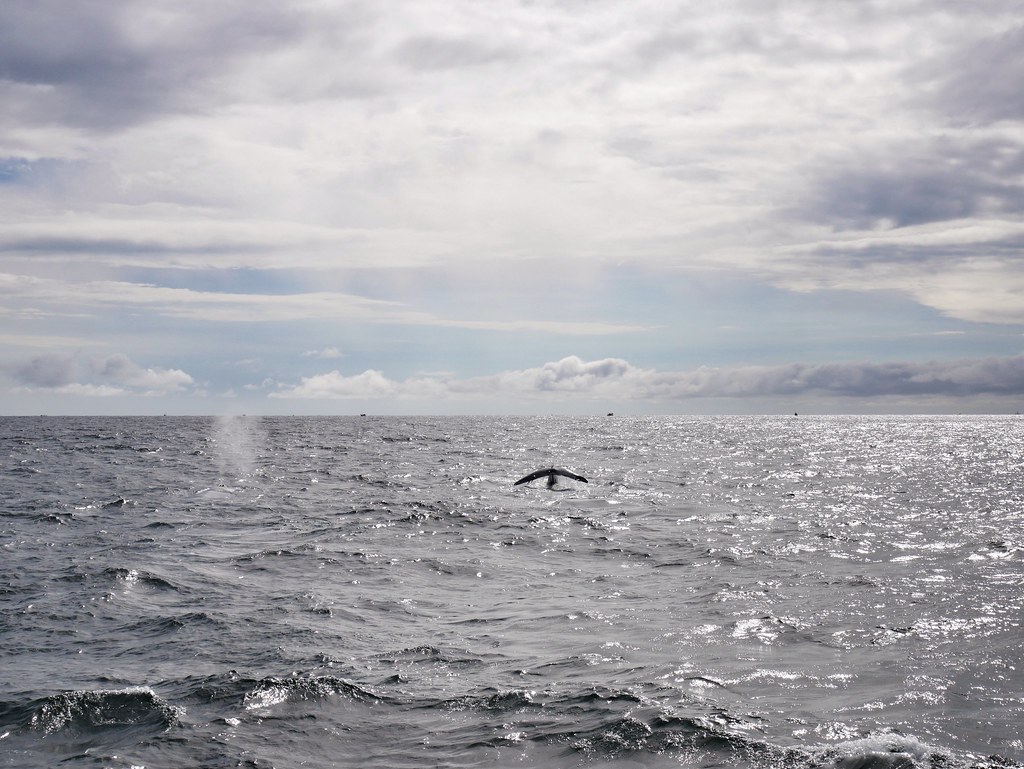 The humongous whales we saw were about 25m long, but they can grow up to 30m. I read that their tongues can weigh as much as an elephant and their hearts are as big as a car. After diving up to 500m down for krill and plankton they come back up for air and rest on the surface while shooting pressurised water up in the air through their blowhole. About a third of their body was visible and rising out the water like an uninhabited island in the middle of the ocean. Not only are they the largest animal known to exists on earth but they are also the loudest, even if we can’t hear them they can hear each others calls and pulses from 1000 miles away! 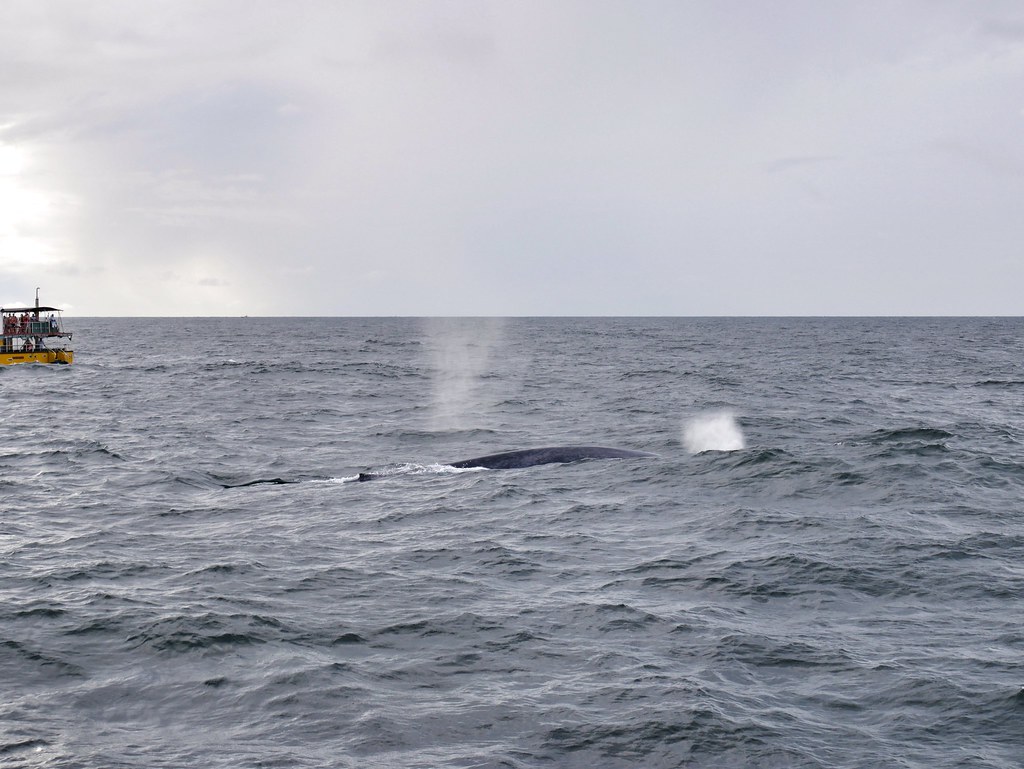 We actually had about 6 whales around us so we were very lucky as some days there’s just one. After 45 minutes of watching these incredible gentle giants on our own about 6 other boats turned up. They weren’t as respectful to the animals and stormed towards them causing the whales to spend less time on the surface. They charged around and after just thirty or so minutes they headed back to Mirissa, it was purely to tick the box that they’d seen a whale, there was no learning about these fascinating animals or respecting their space. I know our boat contributed to the issue but our captain did abide by the rules and keep its distance unlike some other companies. On the journey back we were given Coca Cola, roti with chilli sauce, fruit and even a coconut so we were very well looked after. But seriously, try and eat a watermelon in rough seas, a watermelon full of black seeds which you need to perform an operation on to be able to eat the damn thing. I looked like I’d had my face slammed into a mushy, gone-off watermelon by the time I’d finished. 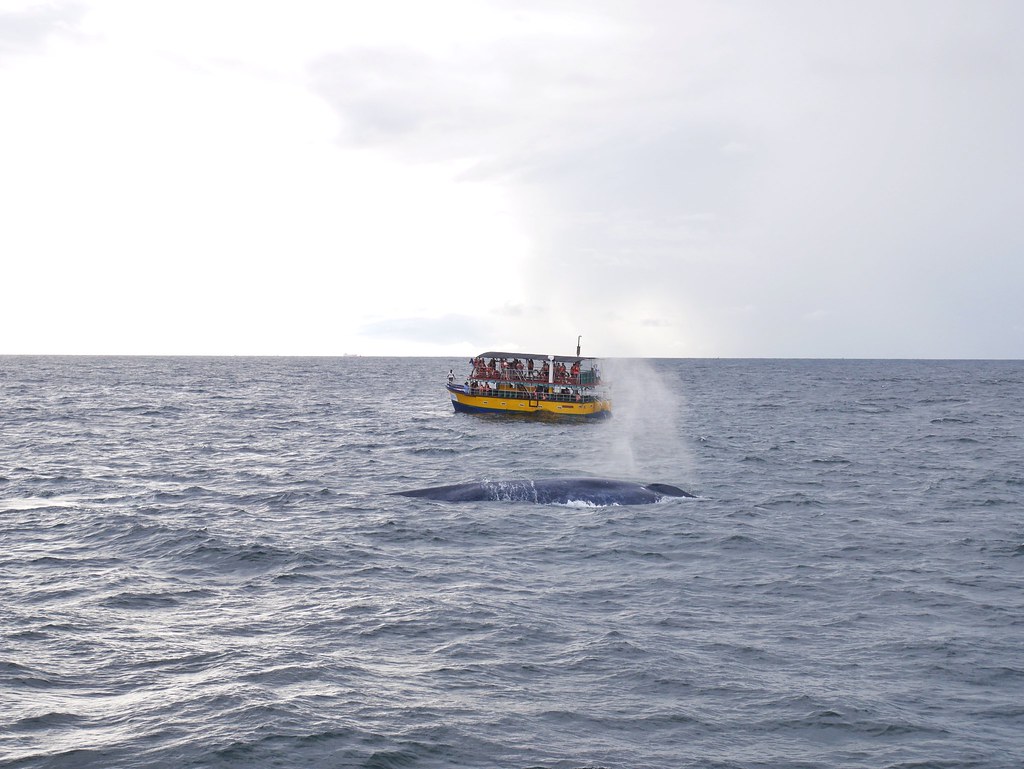 We were back by 10am so we had plenty of time to see more of Mirissa. There were a few different beaches, the main one was wavy and surprisingly busy with tourists, but the area by our guesthouse remained calm and empty. This area was called Turtle Bay and we could see turtles bopping their heads up for a breath of fresh air before diving back down. We also walked across to an island close to the shore. It’s best to do at low tide but we didn’t plan ahead so with our bags on our heads we crossed over for a view of two turquoise bays. 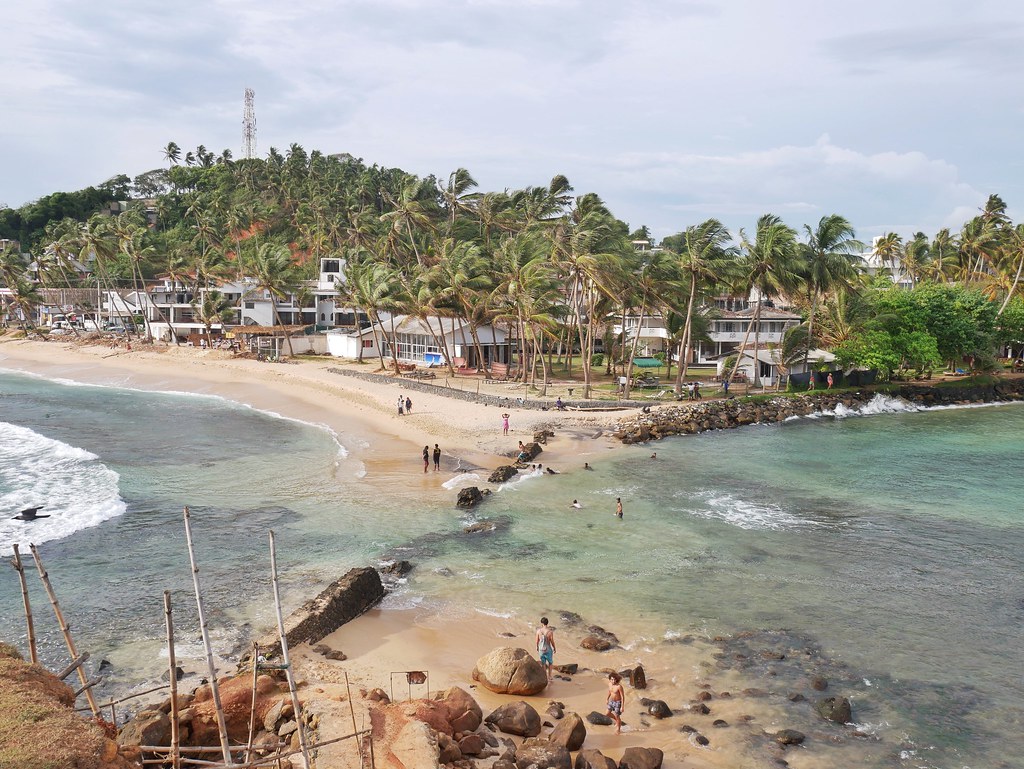 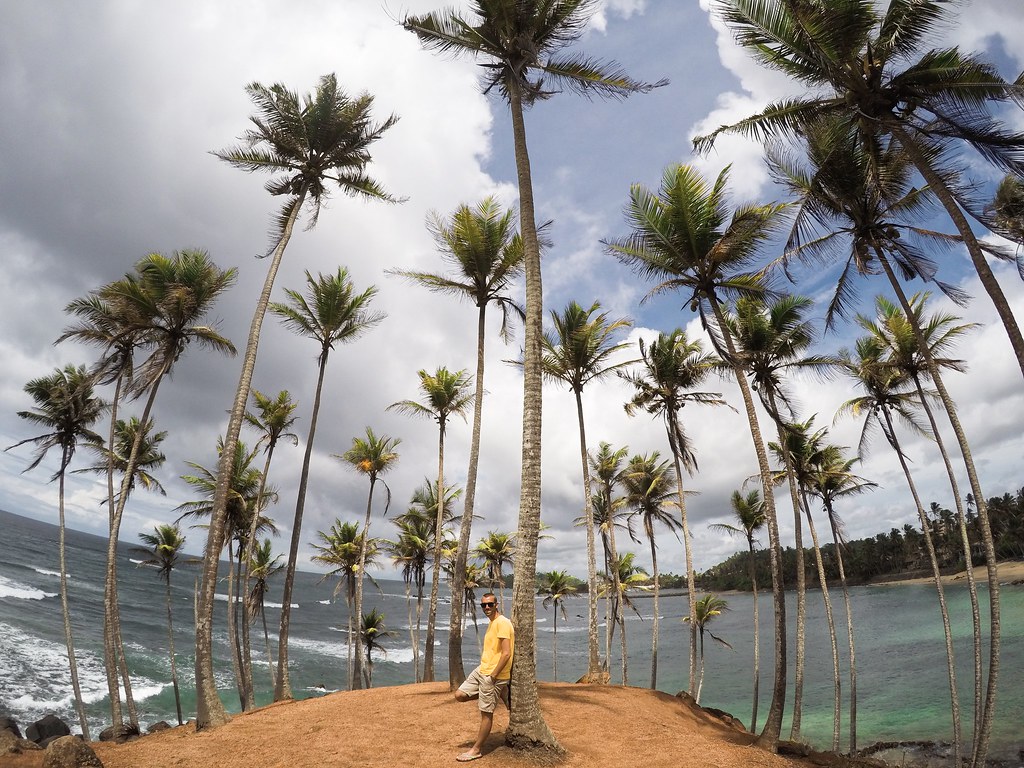 To the side of Turtle Bay was Palm Tree Hill, a beautiful cluster of palms on a small hill. Sadly Sri Lanka is well and truly on the tourist trail and we’re in a day and age where everyone wants ‘that photo’, and so did I. So we arrived at the hill for sunset, along with about thirty other tourists and locals. We waited for the sun to go down while watching the most cringeworthy amateur photo shoots. Girls were dressed up like they were going clubbing in Essex with dresses so short you could almost see what they ate for breakfast. Their faces changed from smiles to pouts quicker than the camera could click. But the funny thing was, all the posers left before the sun even set, the fools. It was one of the best sunsets we’ve seen, with intense orange burning across the horizon. A storm was rolling in and slowly the sky all turned fuchsia pink. The palm trees only added to the dreamy sunset, it was stunning. 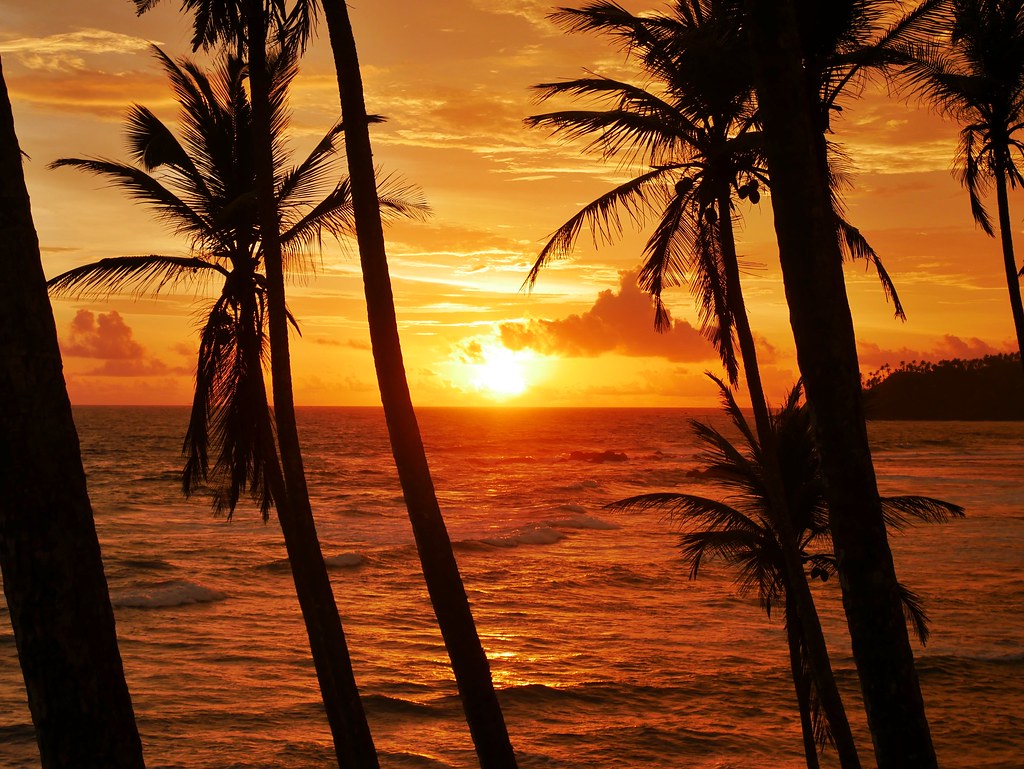 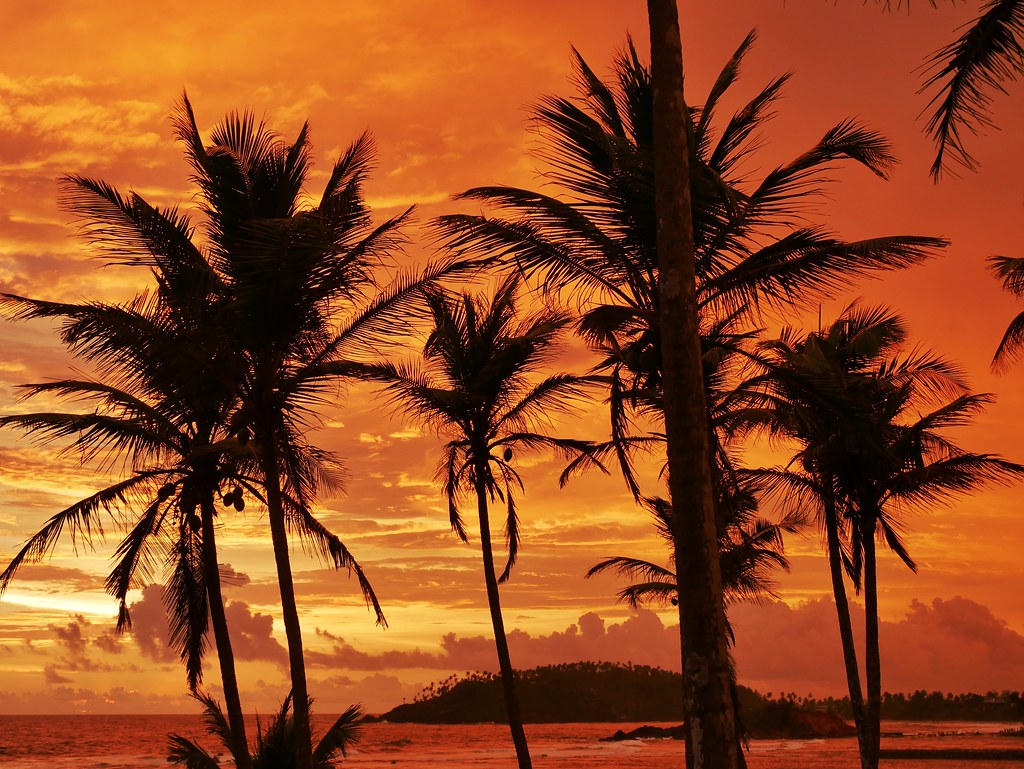 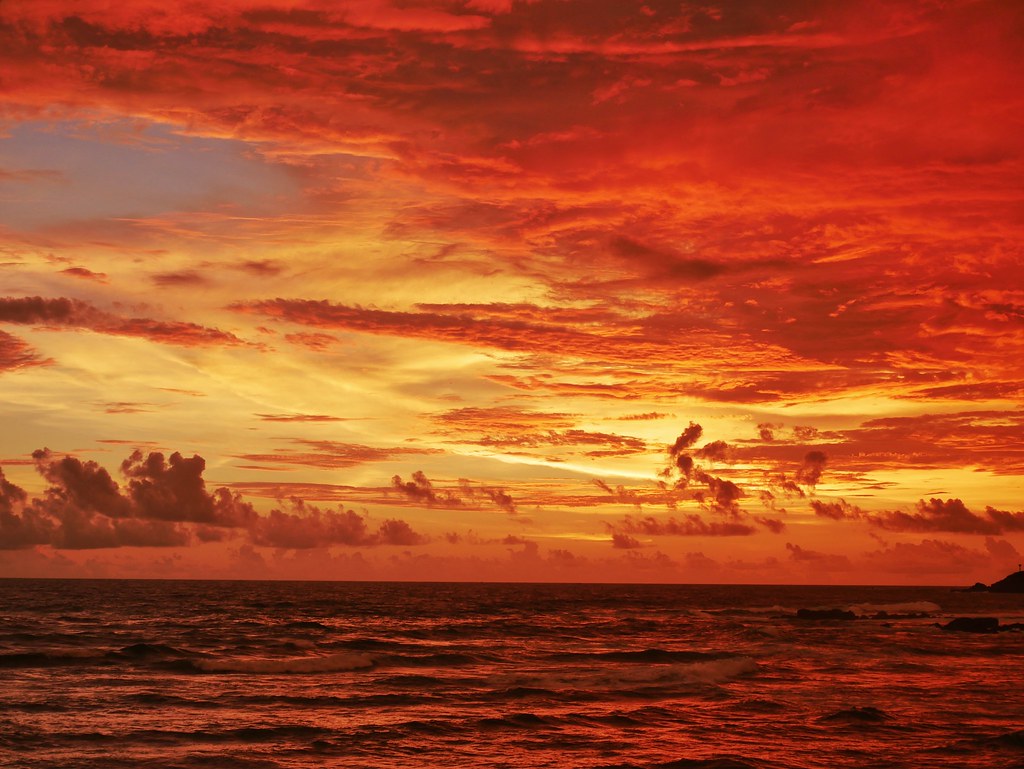 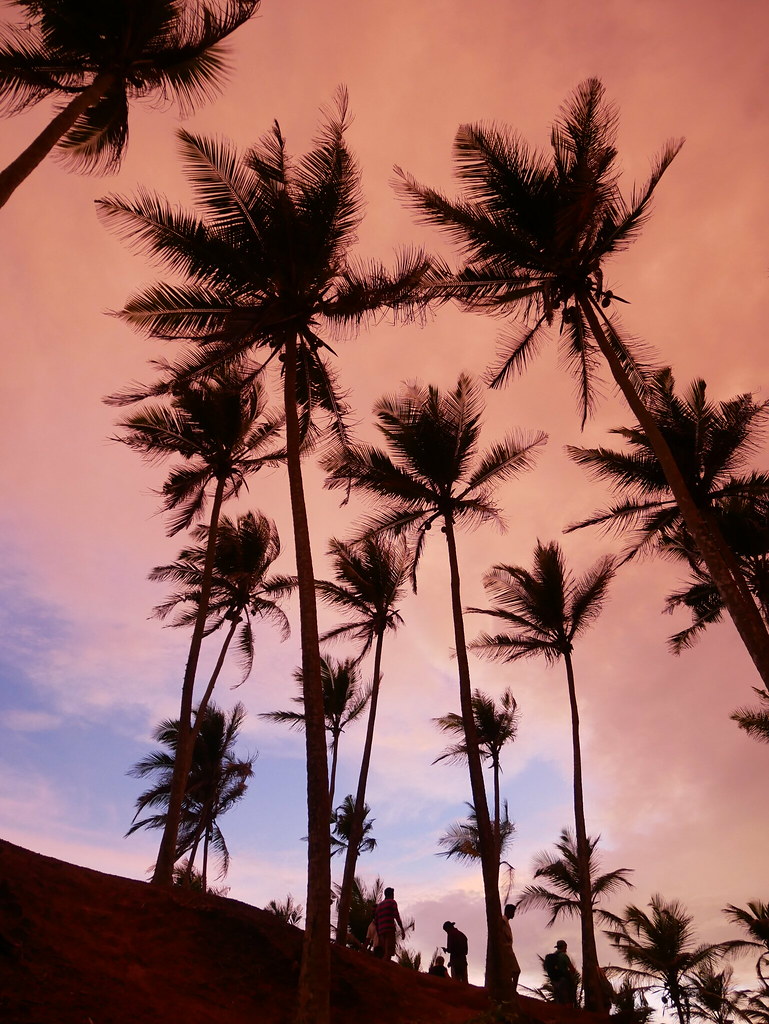 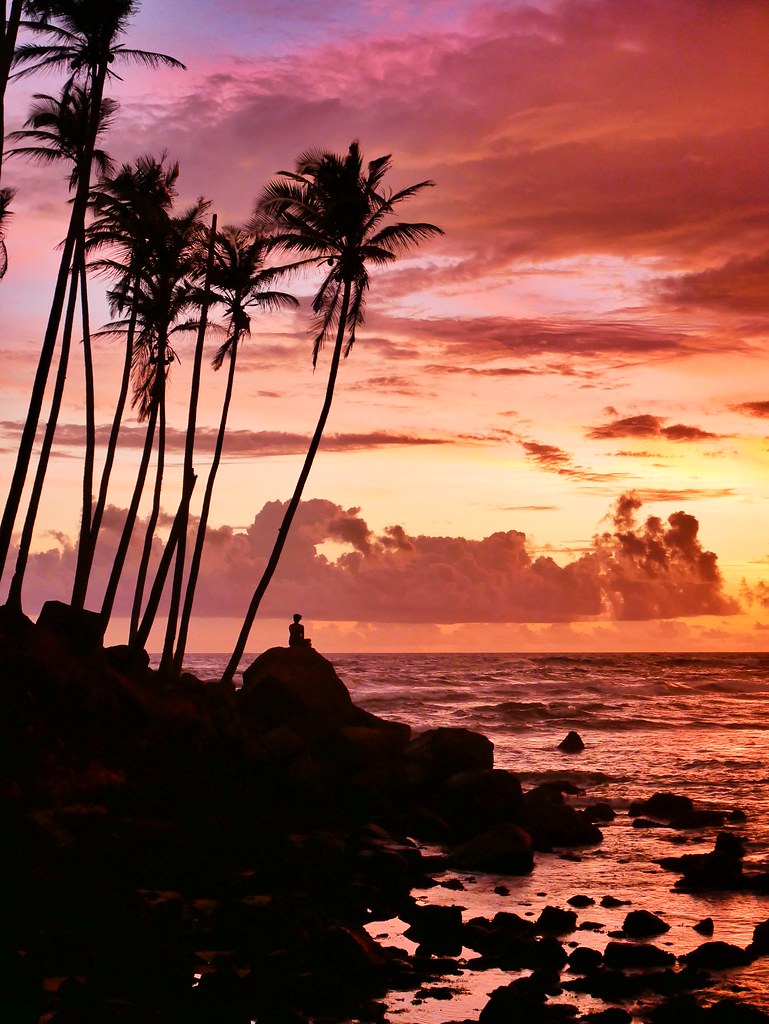